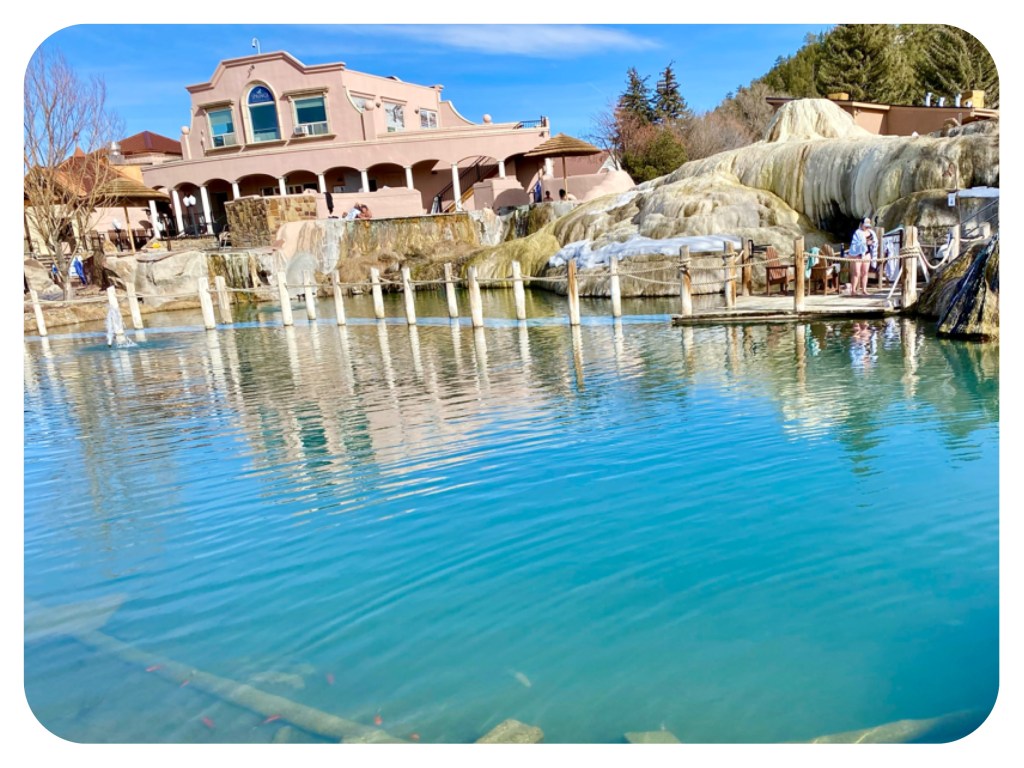 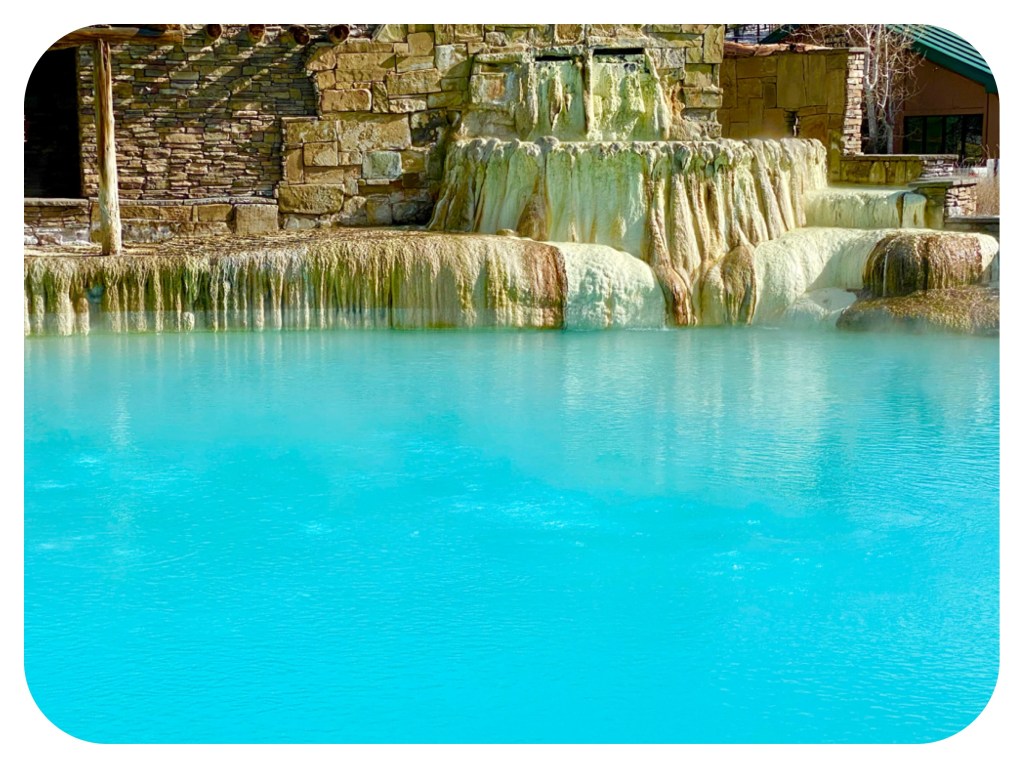 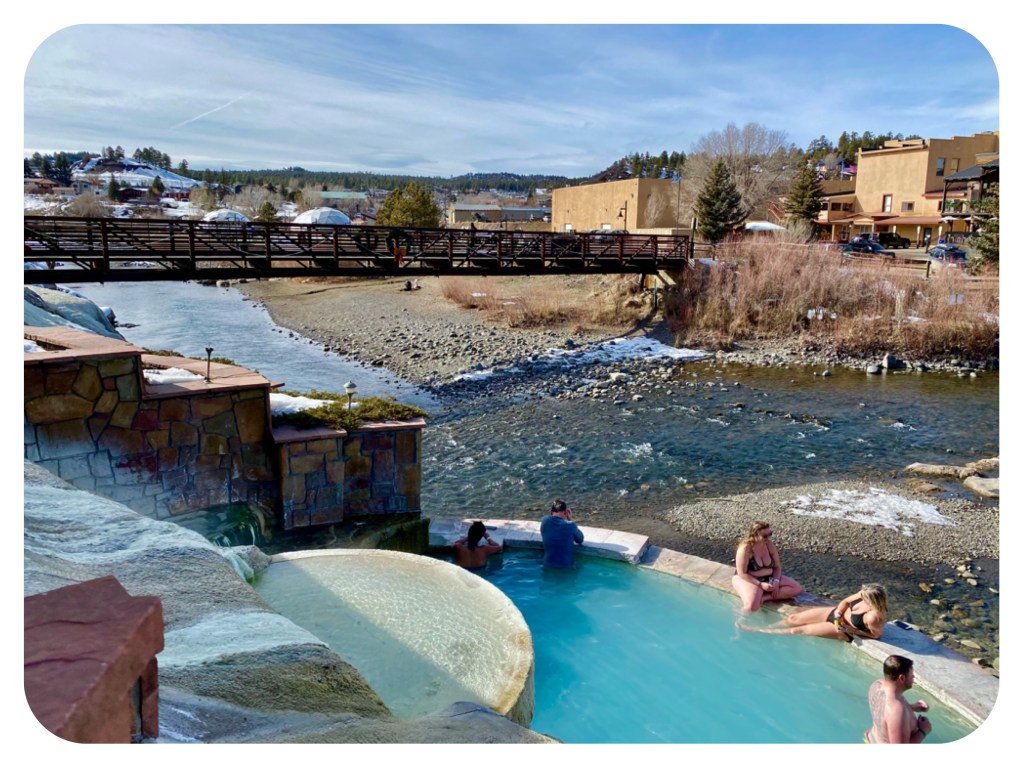 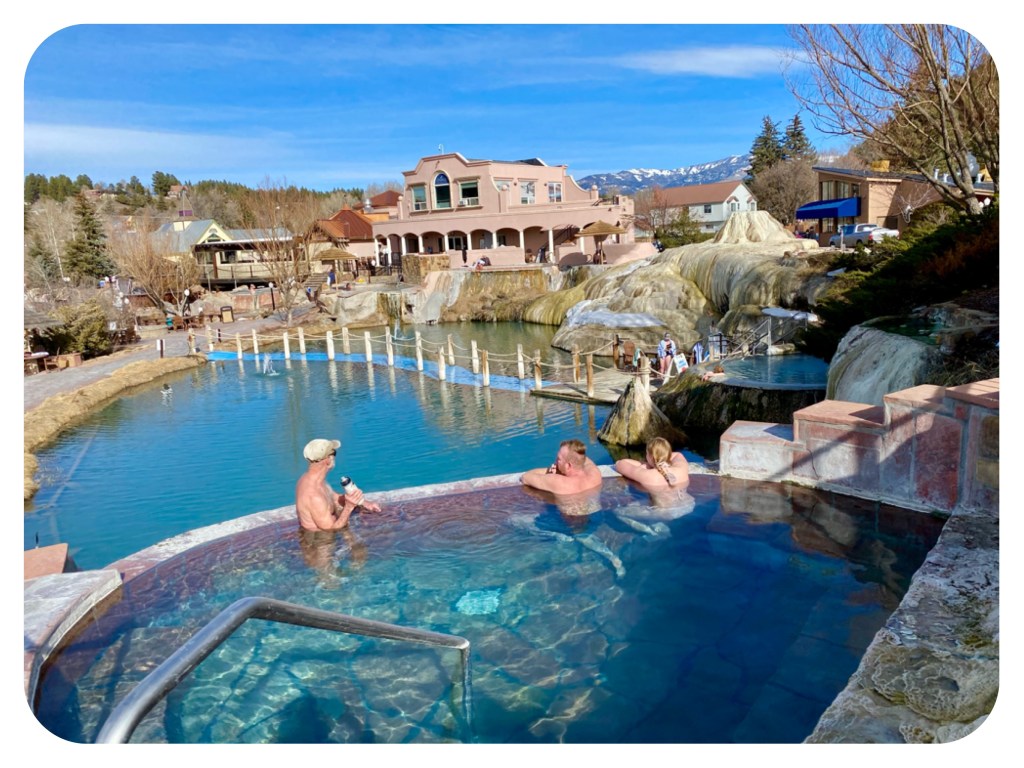 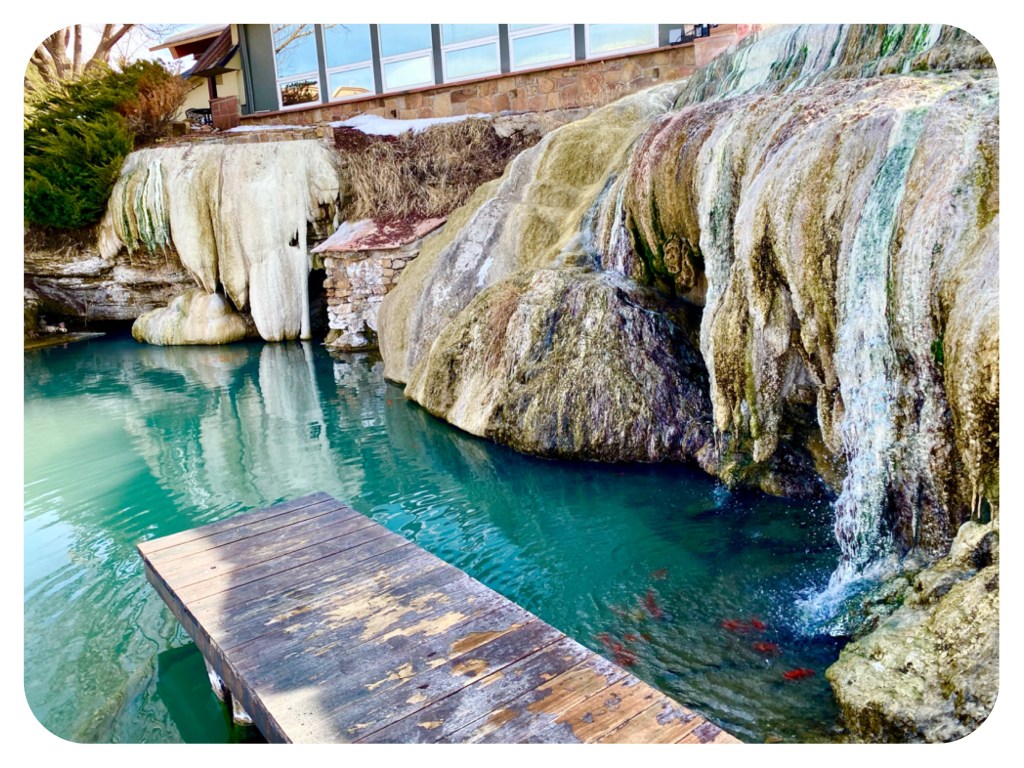 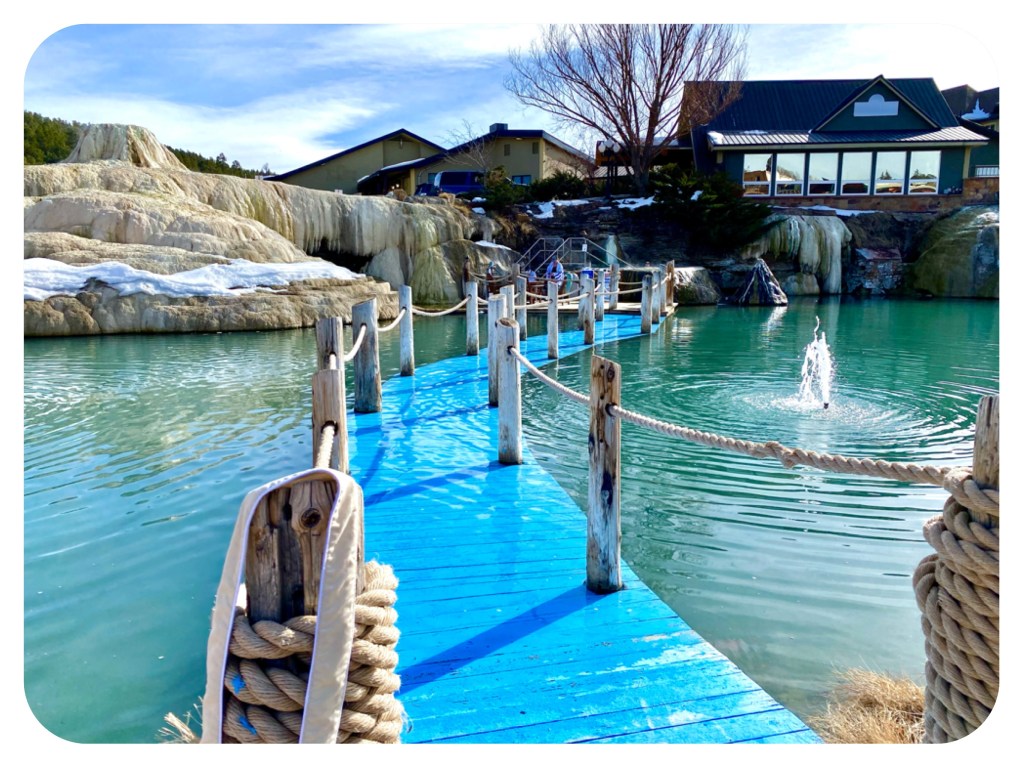 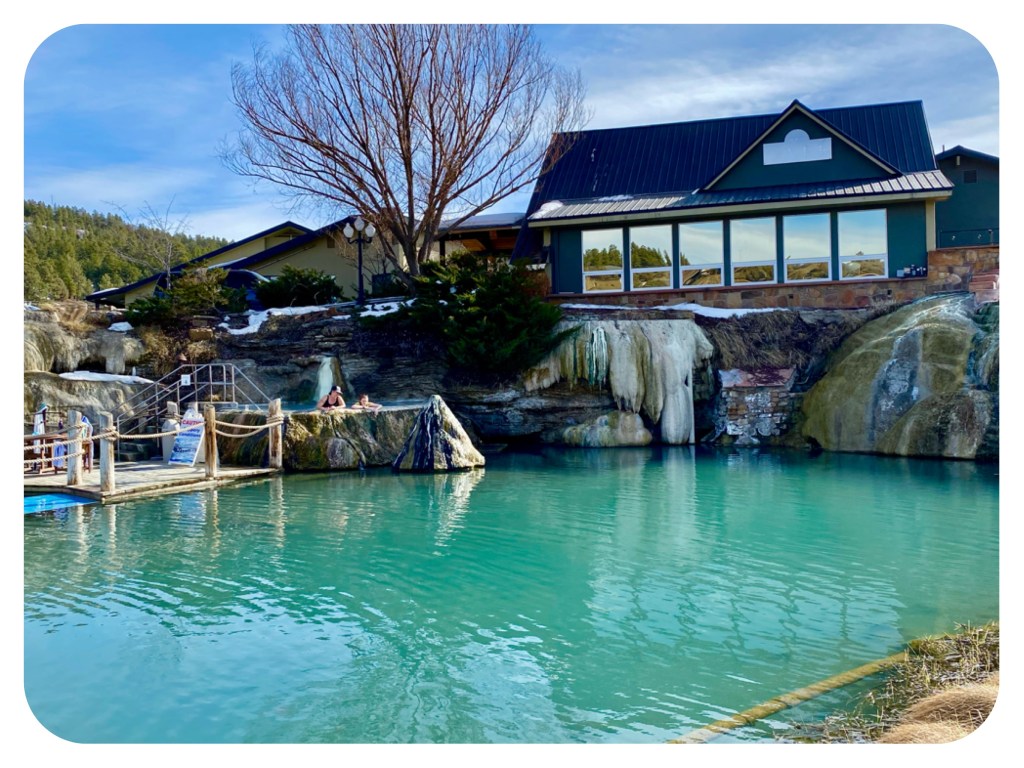 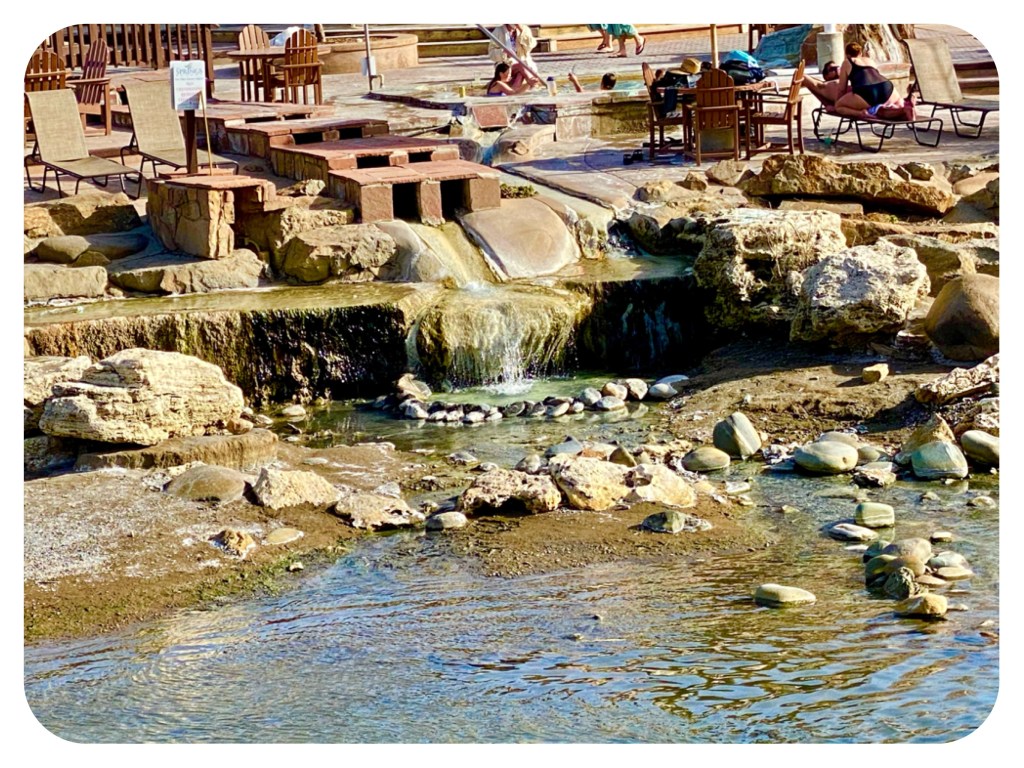 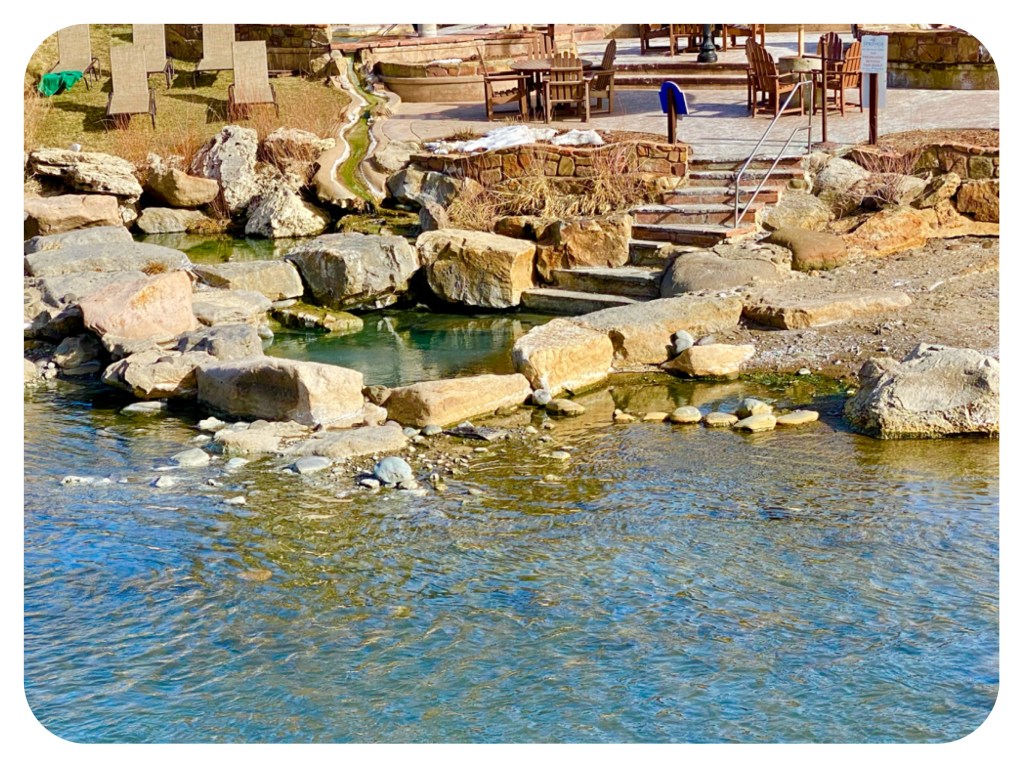 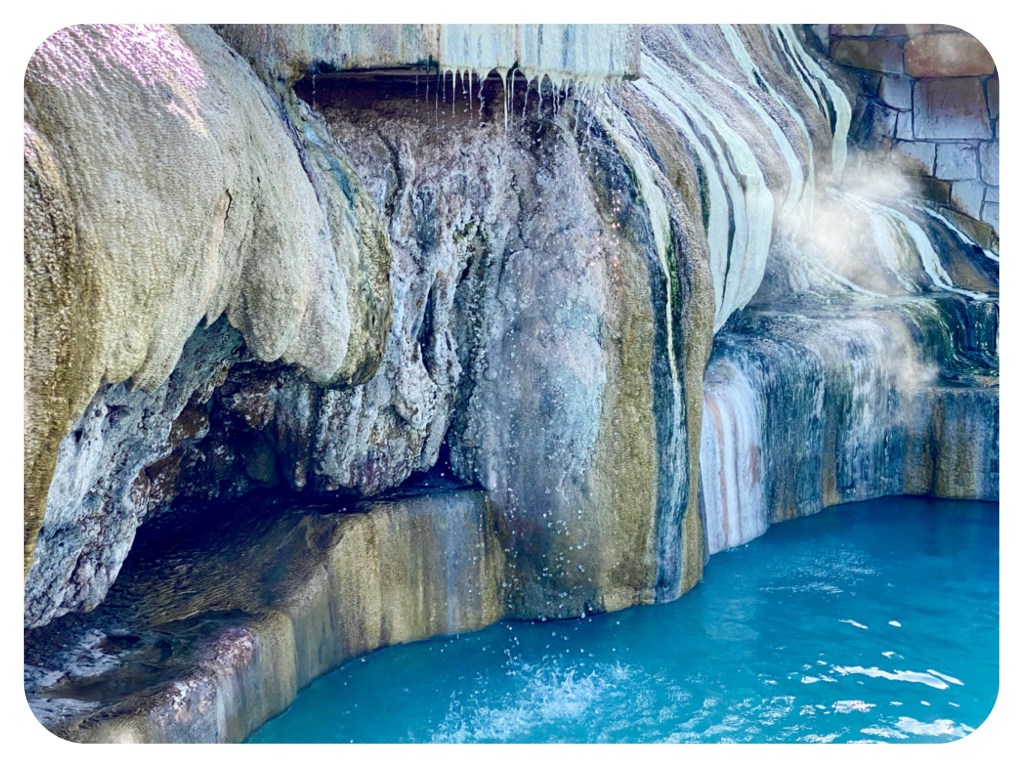 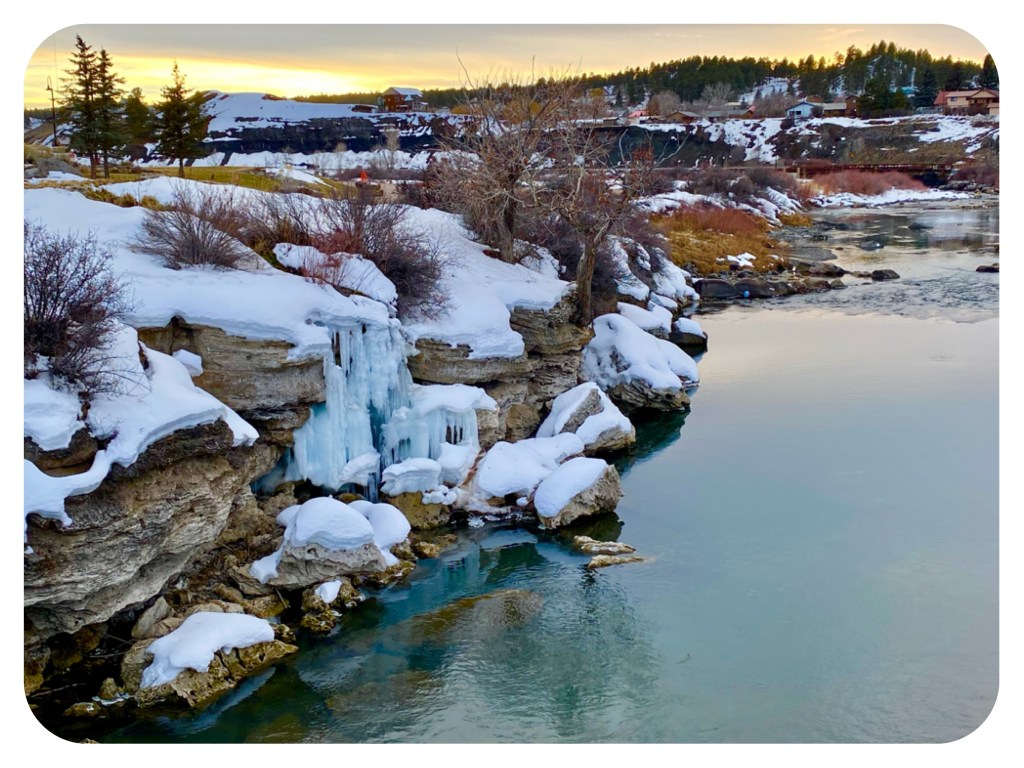 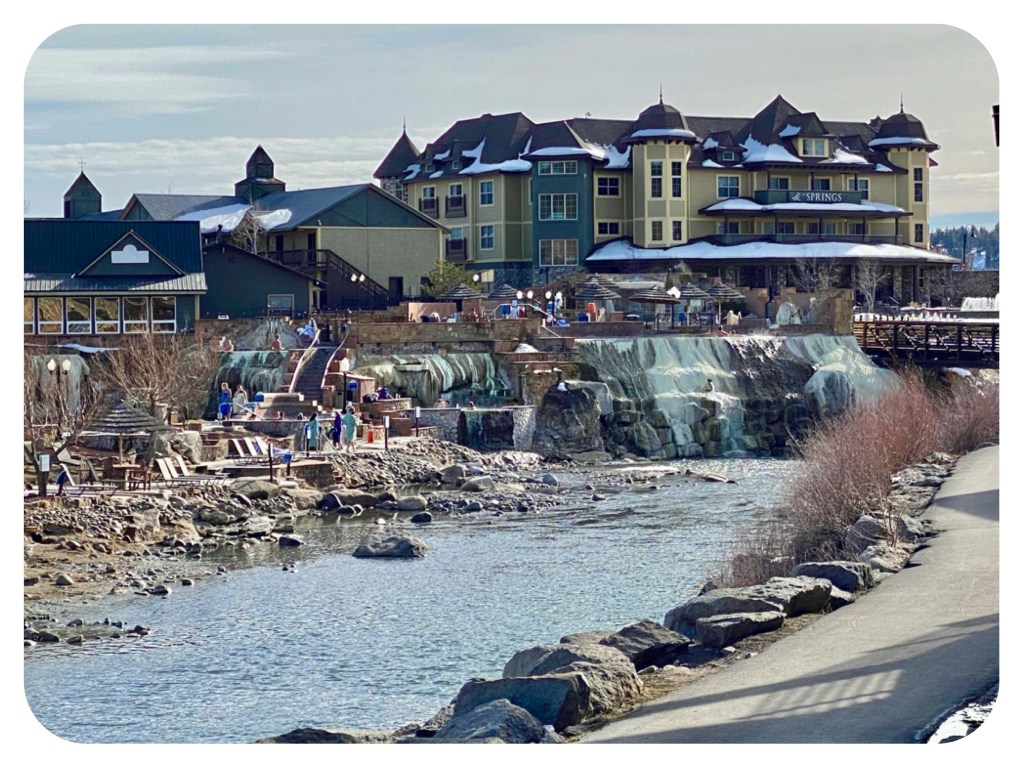 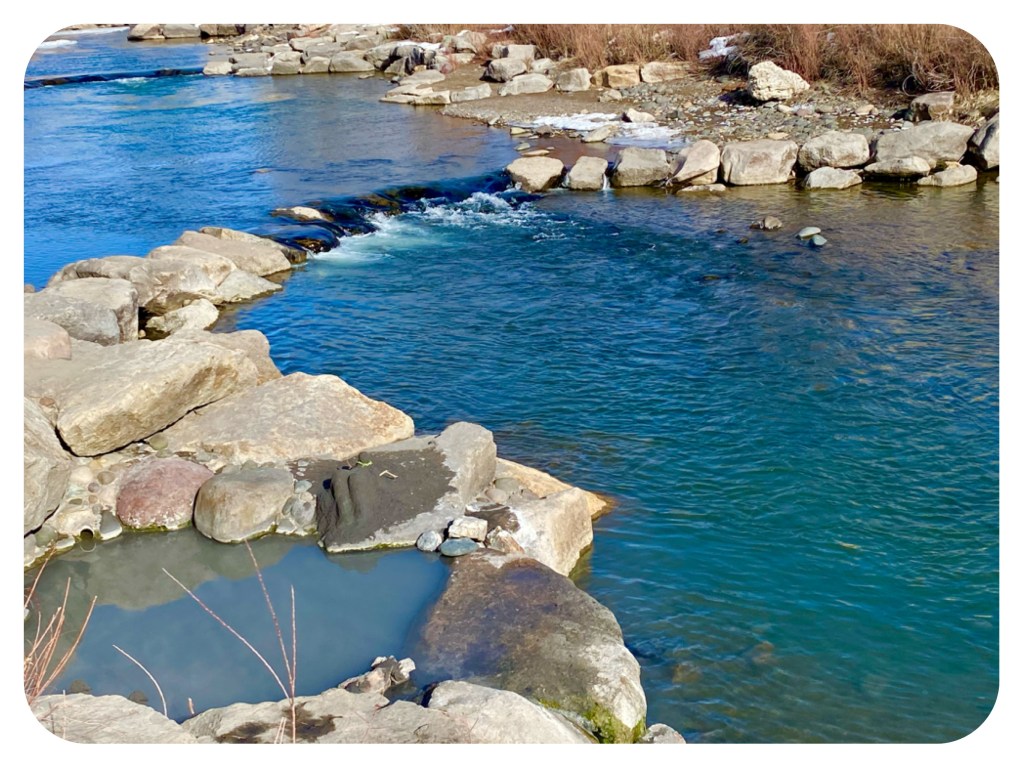 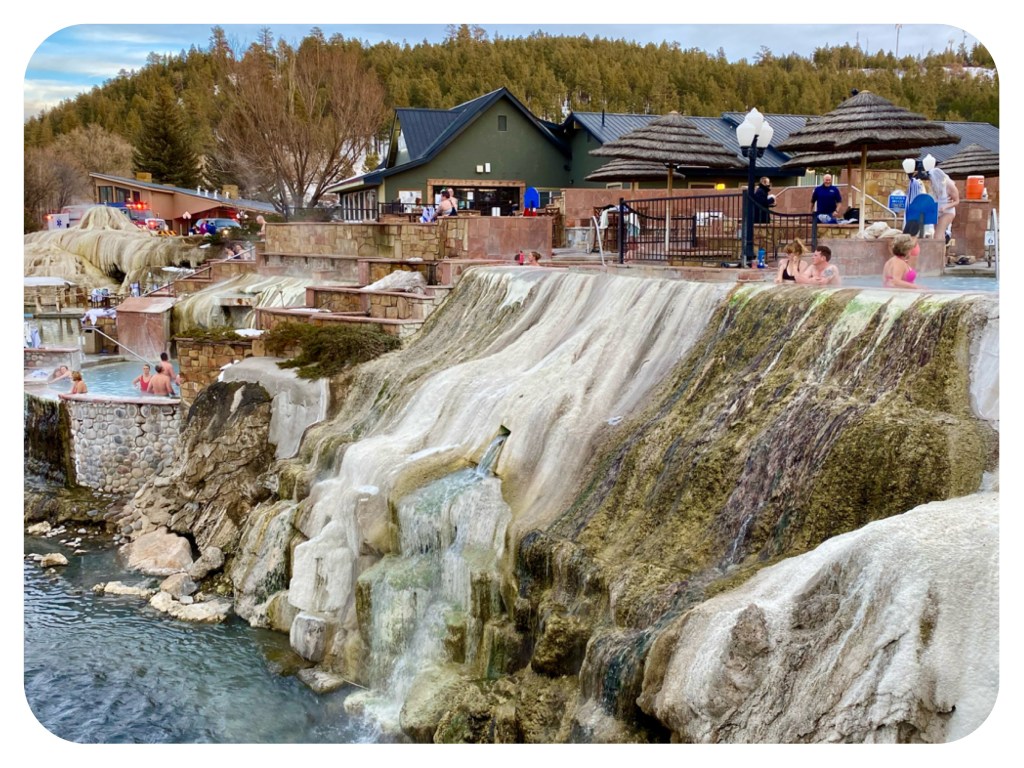 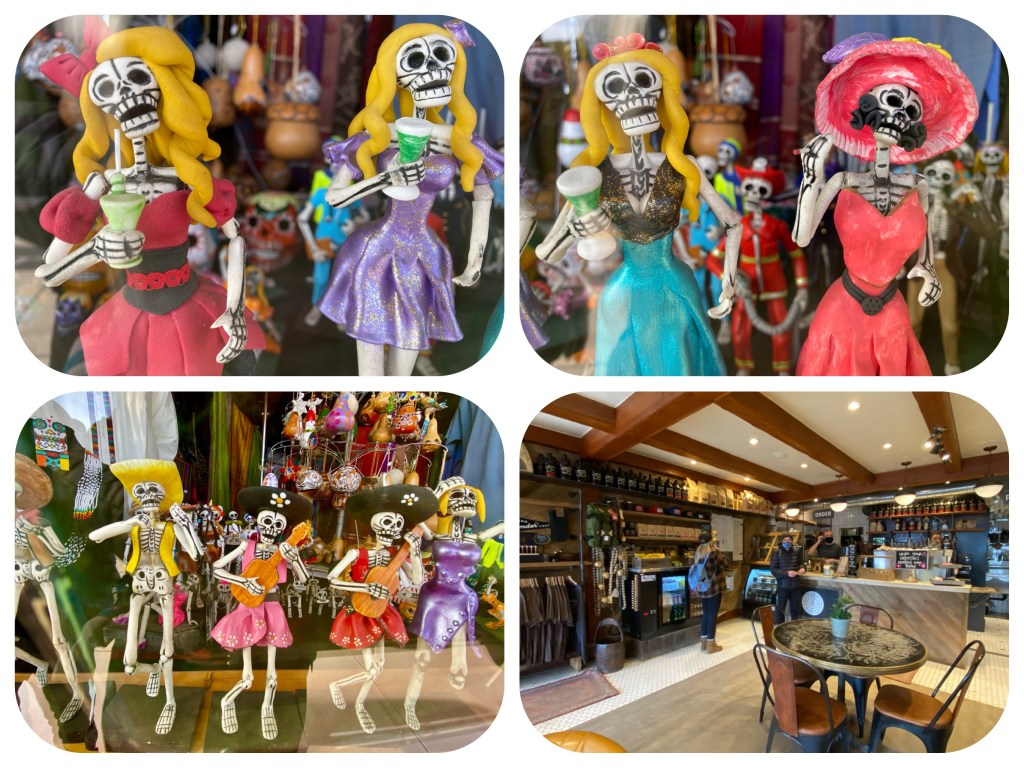 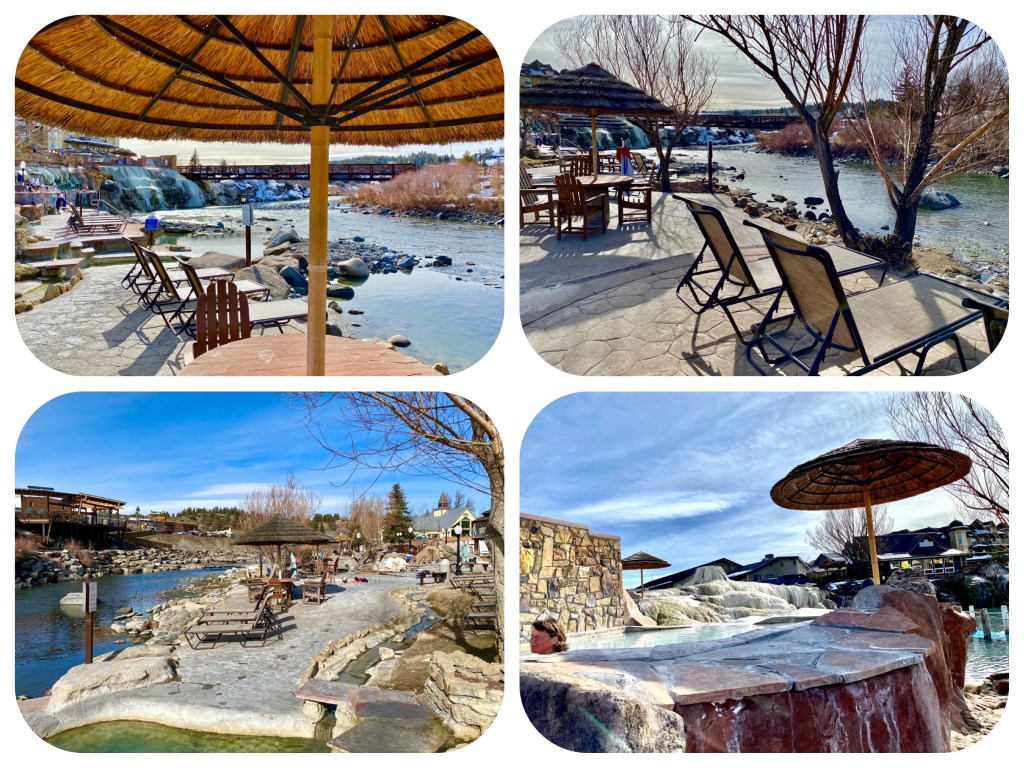 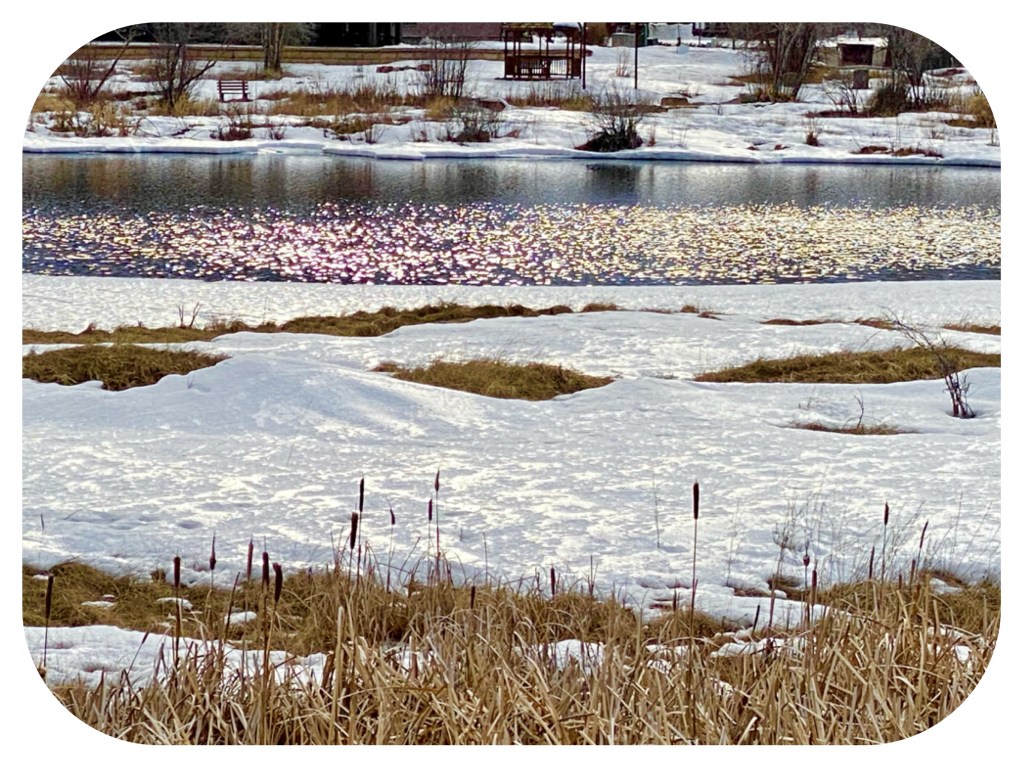 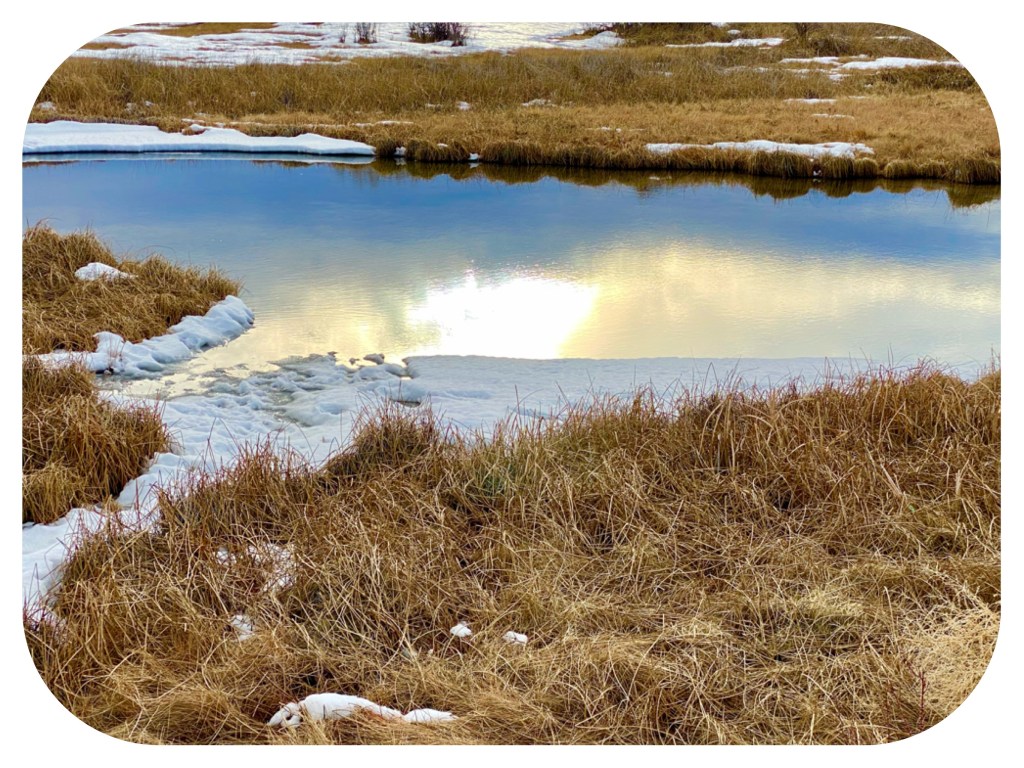 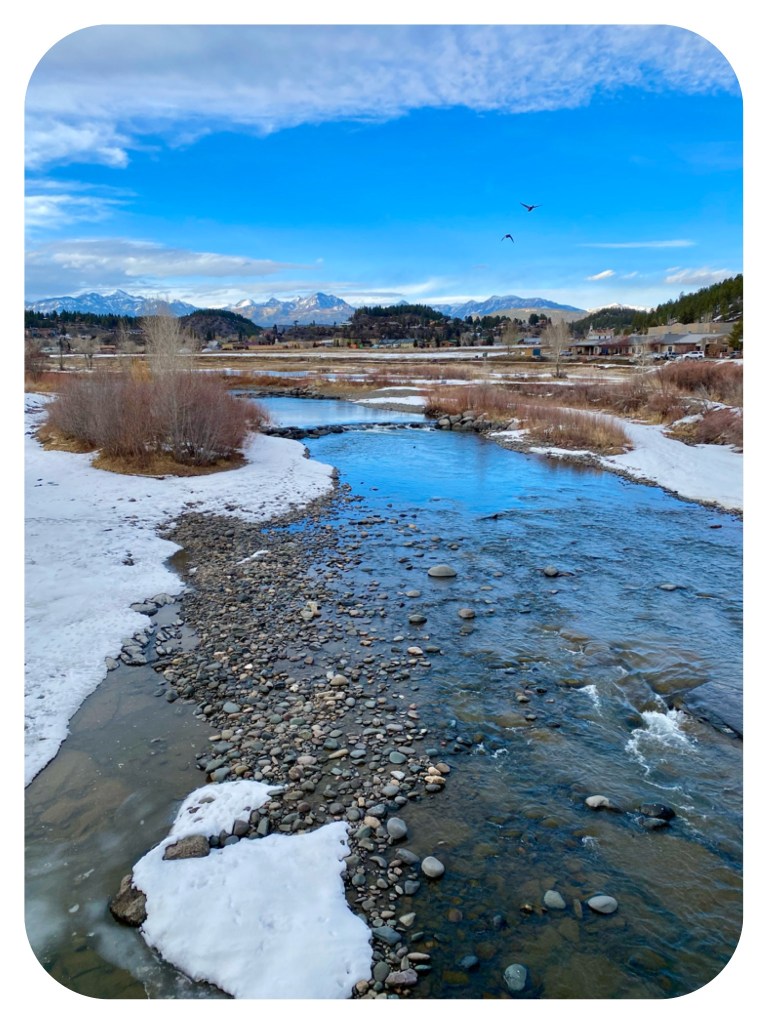 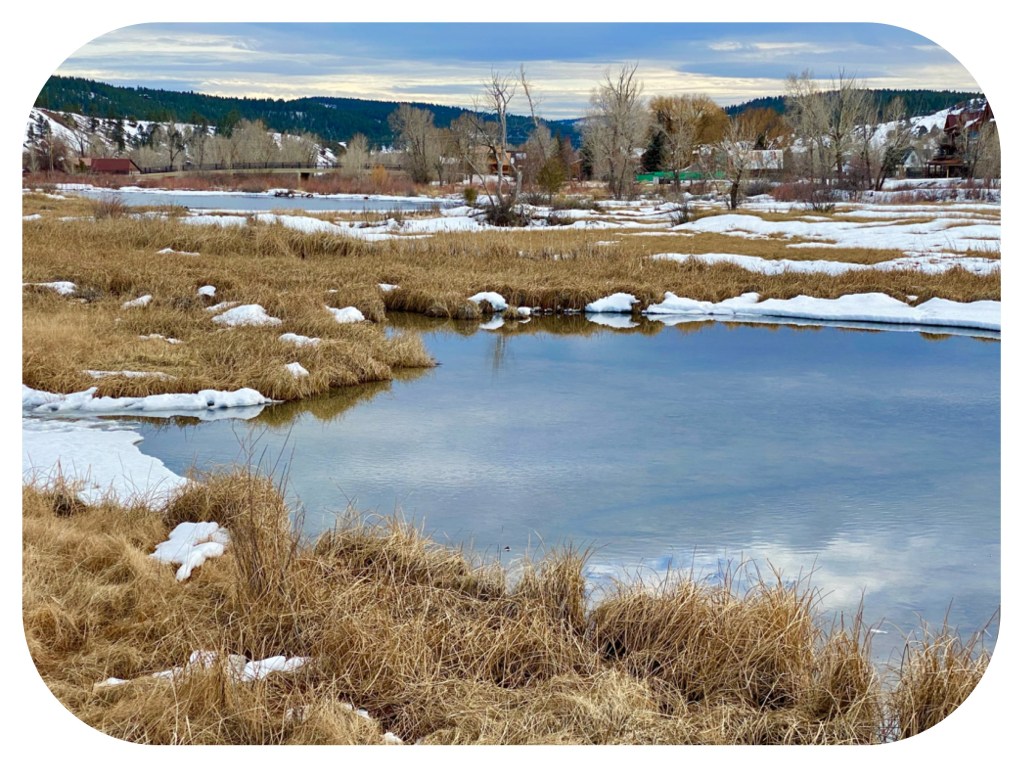 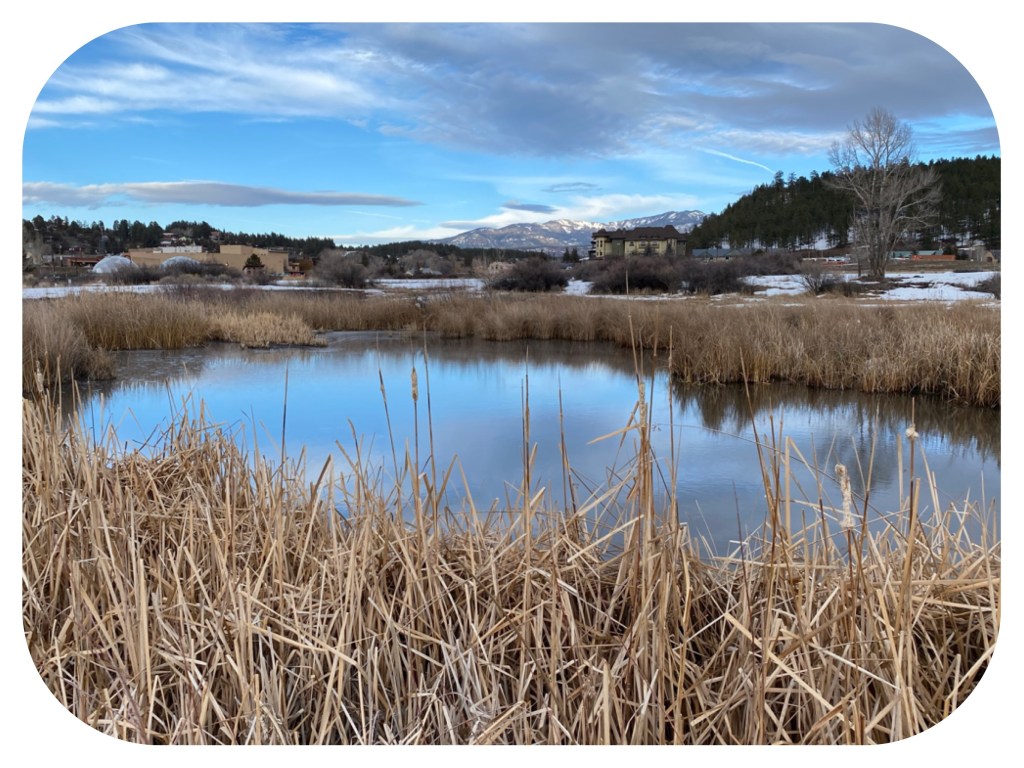 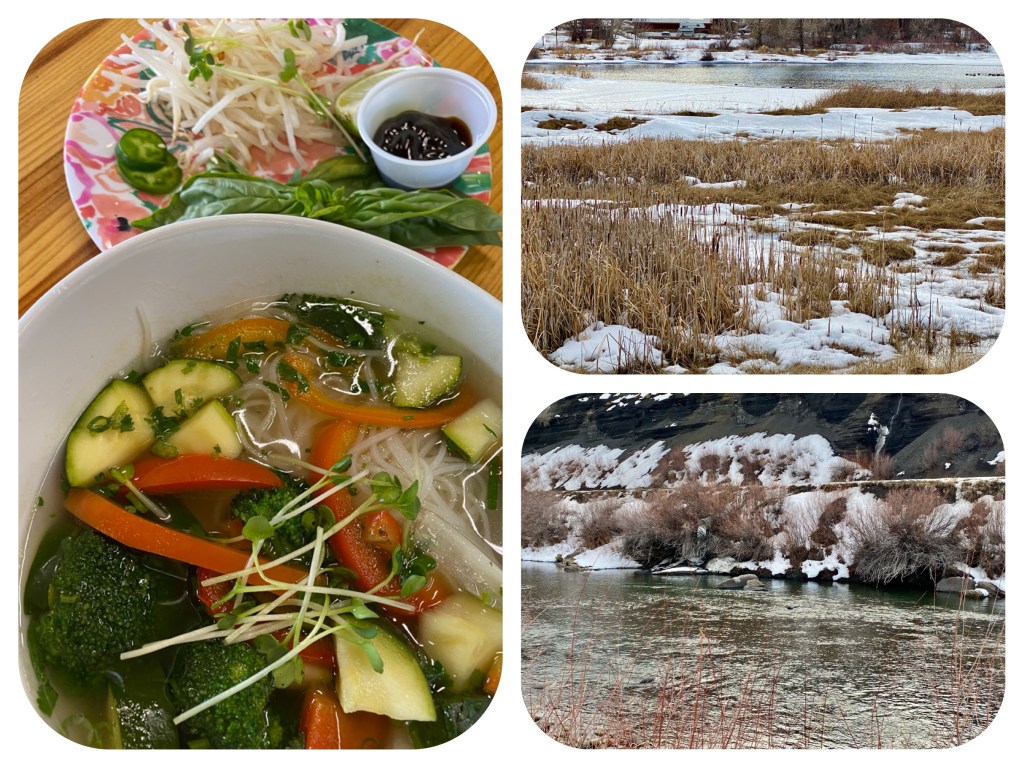 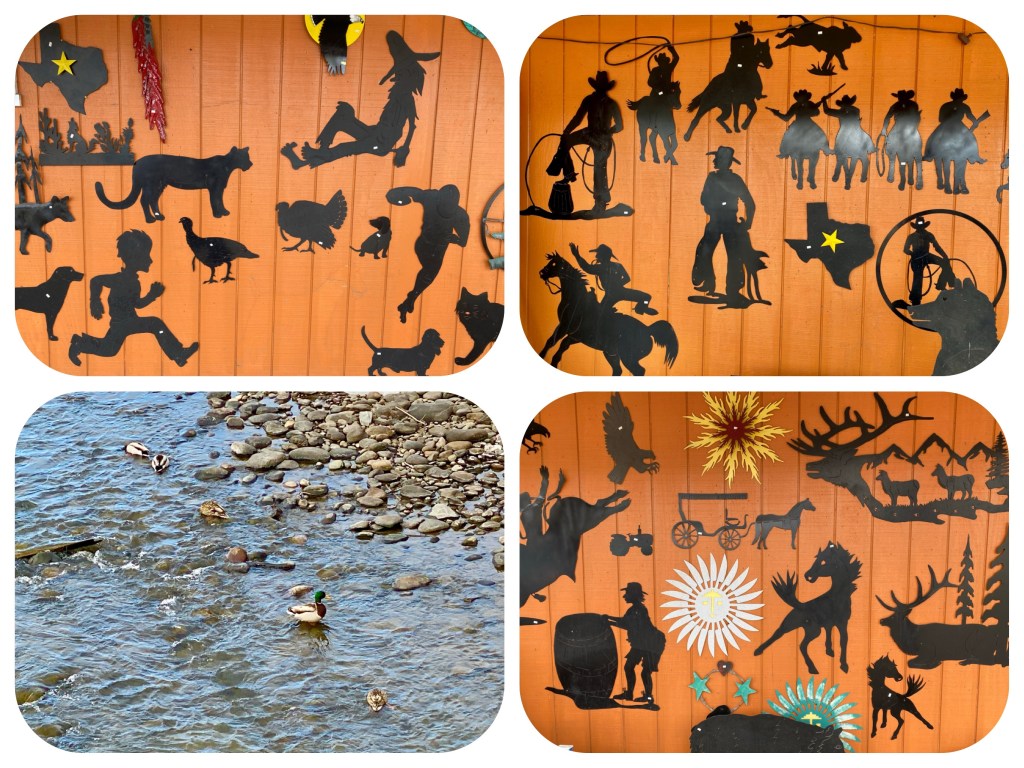 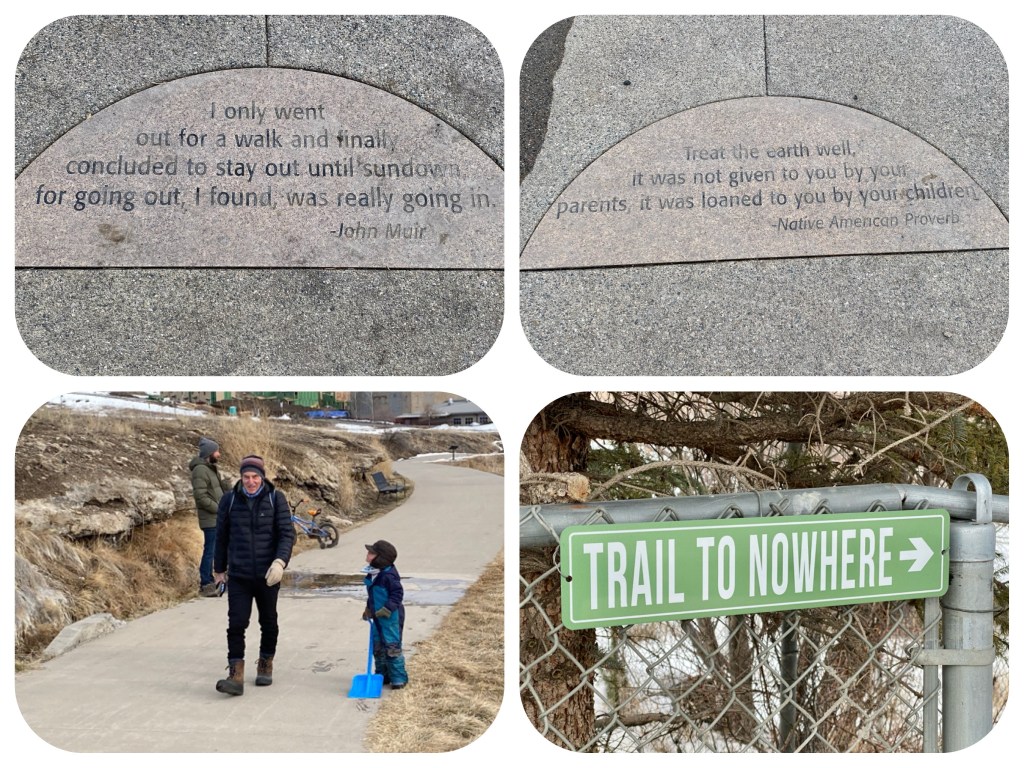 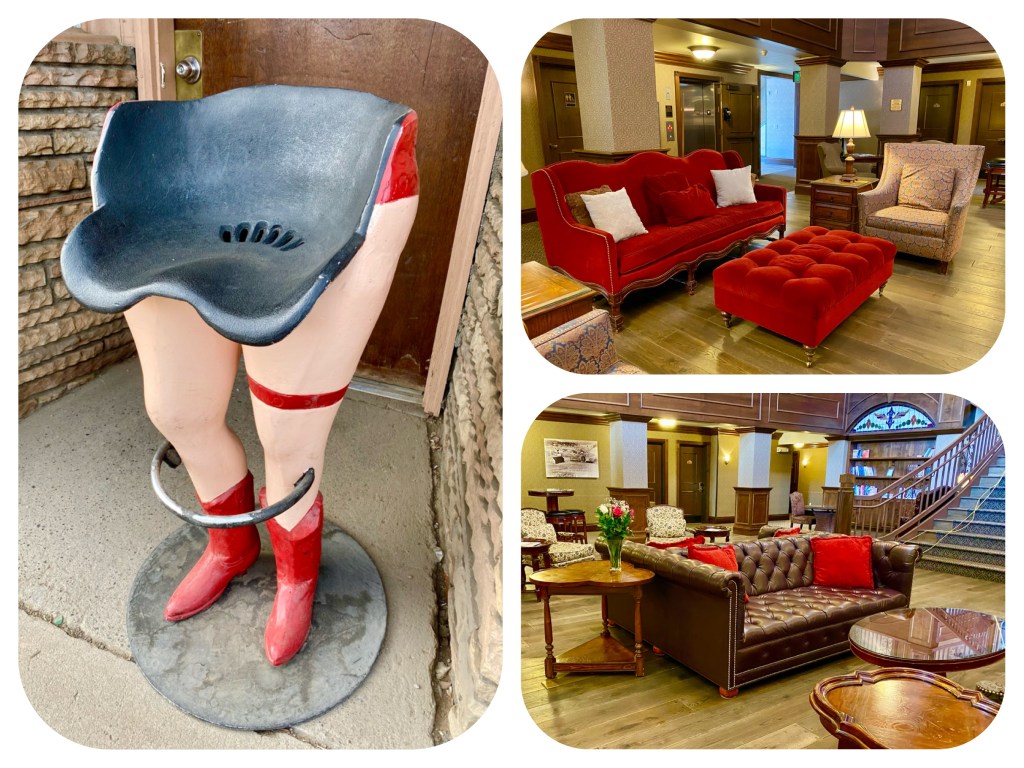 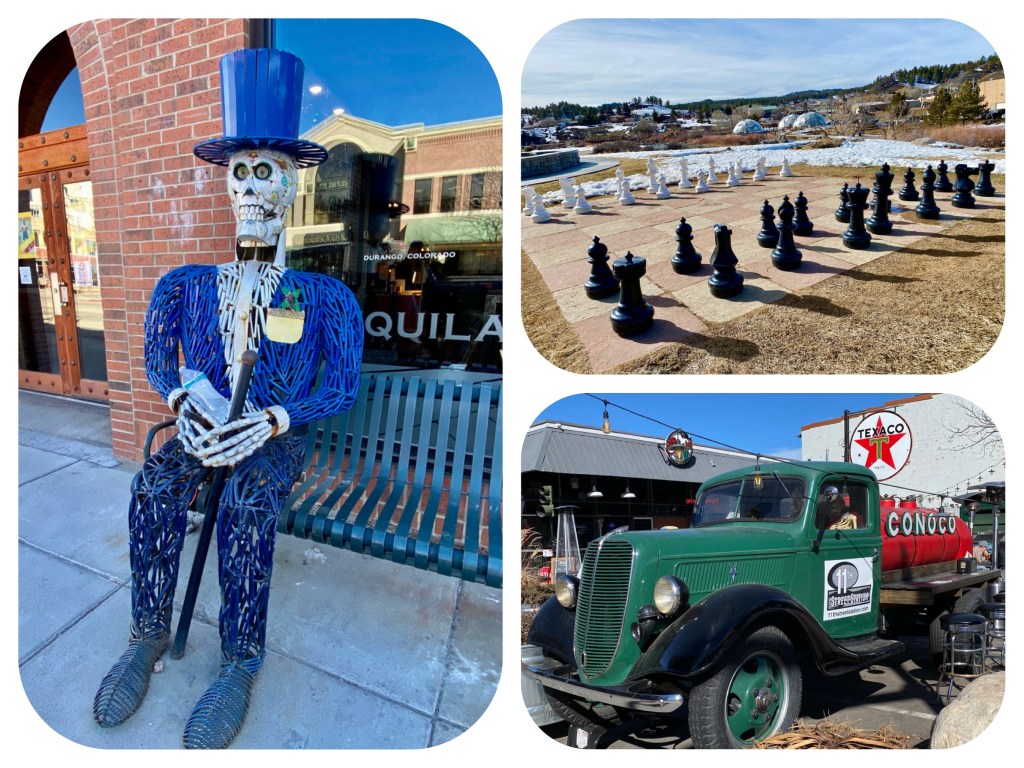 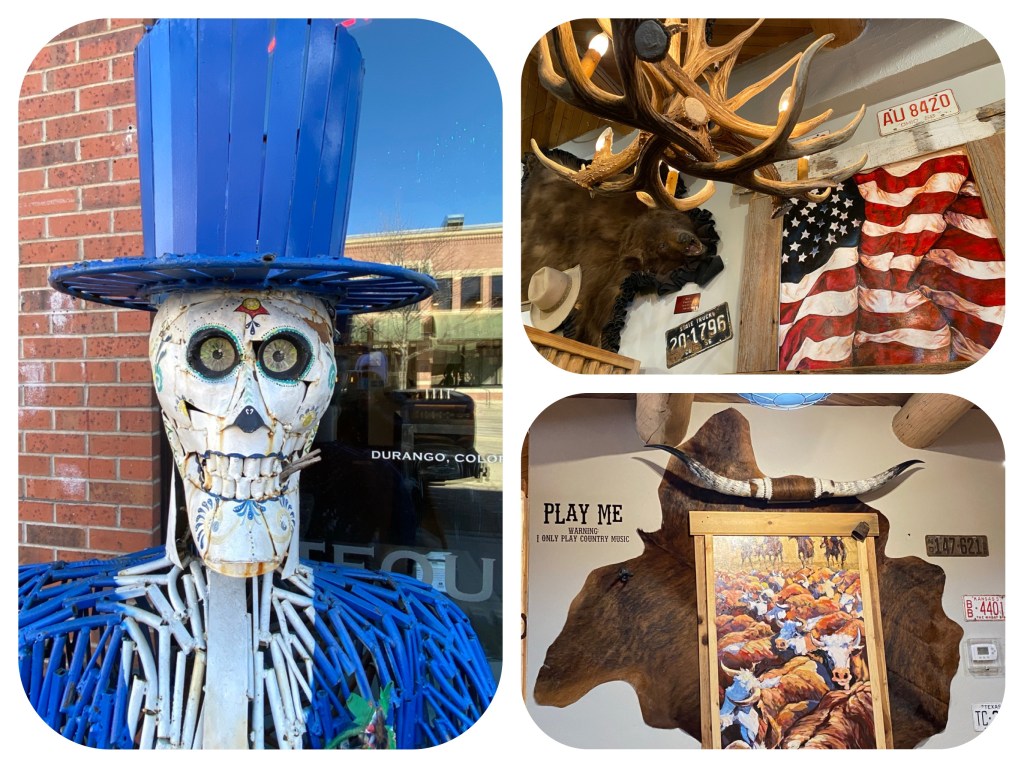 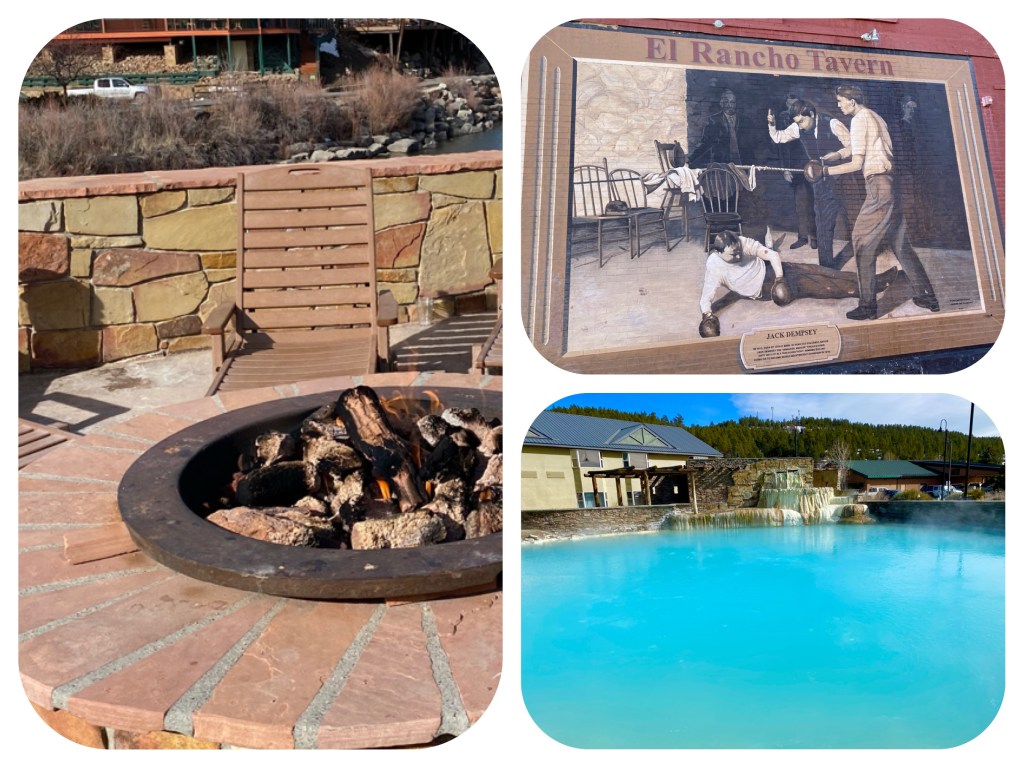 We woke up in Durango to another sunny and mild winter day.
We thought to have breakfast in a French bakery and cafe that serves crepes, but they were closed with no sign on the door indicating the reason.

Instead, we ate a traditional egg breakfast in a cowboy-themed restaurant next door, one that checked the body temperature of each person before allowing them to enter to dine.

There is a very good cafe in Durango, and we lingered there over large pots of tea.

From there, we drove to Pagosa Springs.
We had booked a two night stay in the springs hotel.
It is a pricy hotel, but staying here will allow us to soak 24 hours a day, after all the day visitors have already left.

It was heavenly to walk with our bathrobes from our room to the hot pools.
The hot pools are built right on the river, with some pools built directly into the rocky river bed.

The hot pools are beautiful, tastefully made of natural stone and covered in multiple layers of colorful mineral deposits.

There are 24 soaking pools and an extra five rooftop private tubs, that are open only to hotel guests.

The hot water in Pagosa Springs bubbles up from more than 6,000 feet below the earth’s surface, where it is warmed by residual heat from ancient volcanic activity in the area that occurred more than 20 million years ago.

For generations before Europeans set foot near the Pagosa hot springs in the 1870s, Native Americans used the warm waters as a gathering place.

The area supported a thriving lumber industry in the early twentieth century.
Now it survives on tourism to the hot springs, and to the nearby Wolf Creek Ski Area, the San Juan National Forest, and the Weminuche Wilderness.

People began to visit the springs for health reasons in the 1870s.
No public bathhouses existed, and people often bathed in the streams by the river.
The main springs emerging from the fractured rocks were too hot for humans to bathe in.

More people arrived after the Brunot Agreement was signed in 1873, which opened the San Juan Mountains to mining.
People began to settle around the springs, which lay along an important route to the San Juan mining camps.

Seeing the potential for future profit, some people made fraudulent claims of ownership of the land around the springs.
In May, 1877 President Rutherford B. Hayes issued an executive proclamation, reserving one square mile around the hot springs for public town ownership, thus making the springs the property of the city.

Pagosa Springs is not a big city.
The old part is just one street of a few short blocks in length, with some shops, a few restaurants and a good cafe by the river.

An area of wetlands by the river was developed in order to provide a natural habitat for migrating Canadian geese, a variety of trout and pike fish, along with other ubeautiful birds that winter in the area.
We took a long walk along the paved path through the wetlands, enjoying the birds, the river, and just being in nature.

We had a great time soaking in the pools, mostly at night after sundown, when it was so awesome to feel the freezing cold air against our overheated skins.

The only reason Pagosa Springs is not as famous as it should be is because of its remote location, tucked away in the San Juan Mountains, and far from any major highway.

To get here we had to cross some steep mountain passes, and tomorrow when we leave here, snow is predicted in the higher elevations, which might make the drive a bit scary…. wish us luck….

← The Beautiful San Juan Million Dollar Skyway From Ouray To Durango, And A Soak In The Durango Hot Springs, Colorado
Pinkerton Hot Springs And The Cute Old Silver Mining Town Of Silverton, Colorado →