Days 45 and 46 – The Road To Enlightenment – Walking The Saigoku Kannon Pilgrimage – Collecting Our Bag In Shirahama and Walking Through The Red Tori Gates Of Fushimi Inari Mountain, Kyoto, Japan 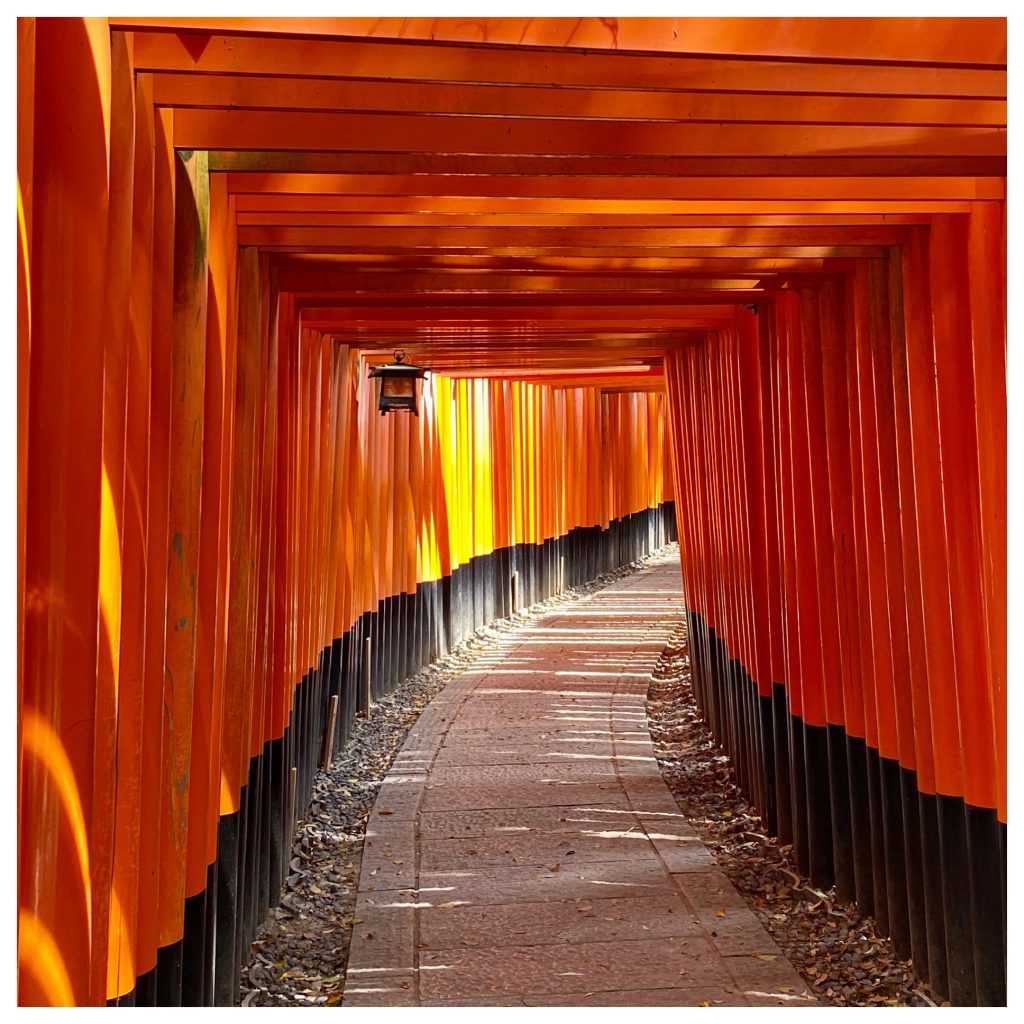 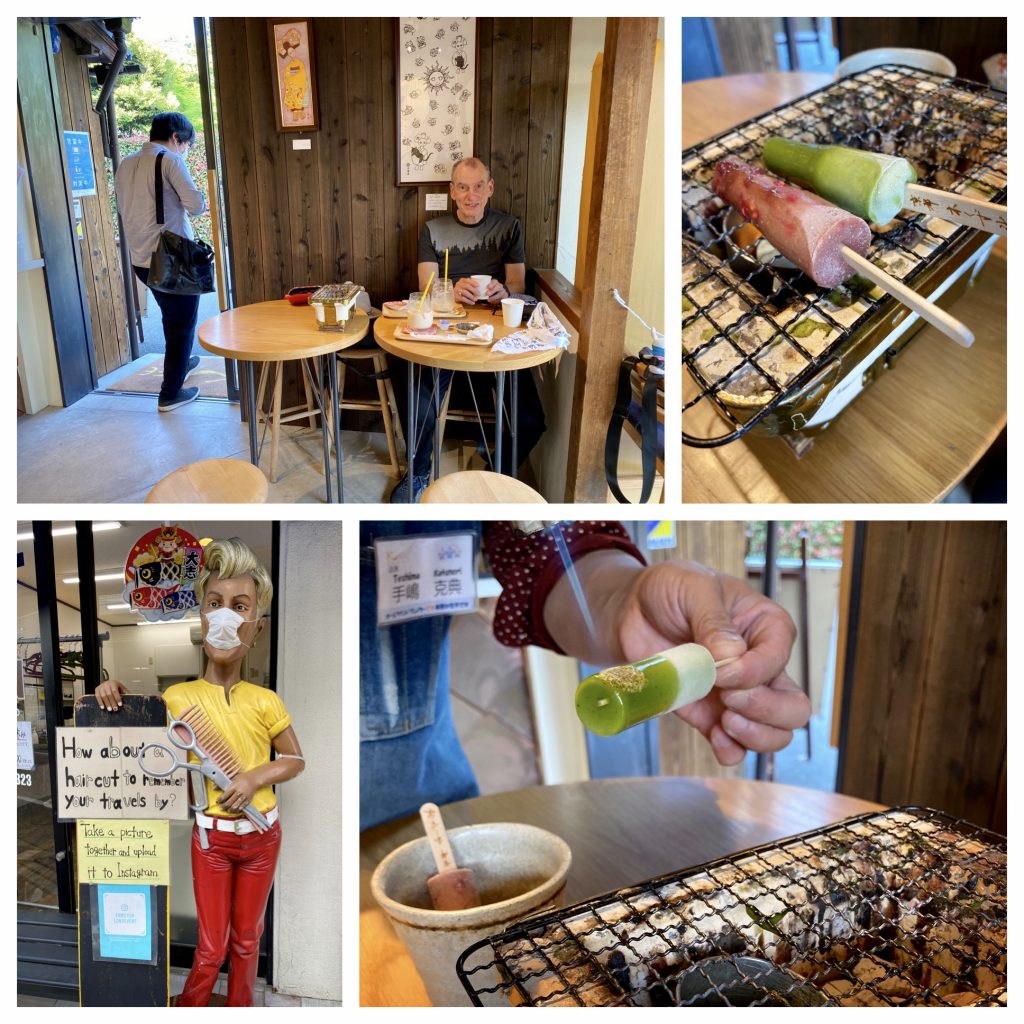 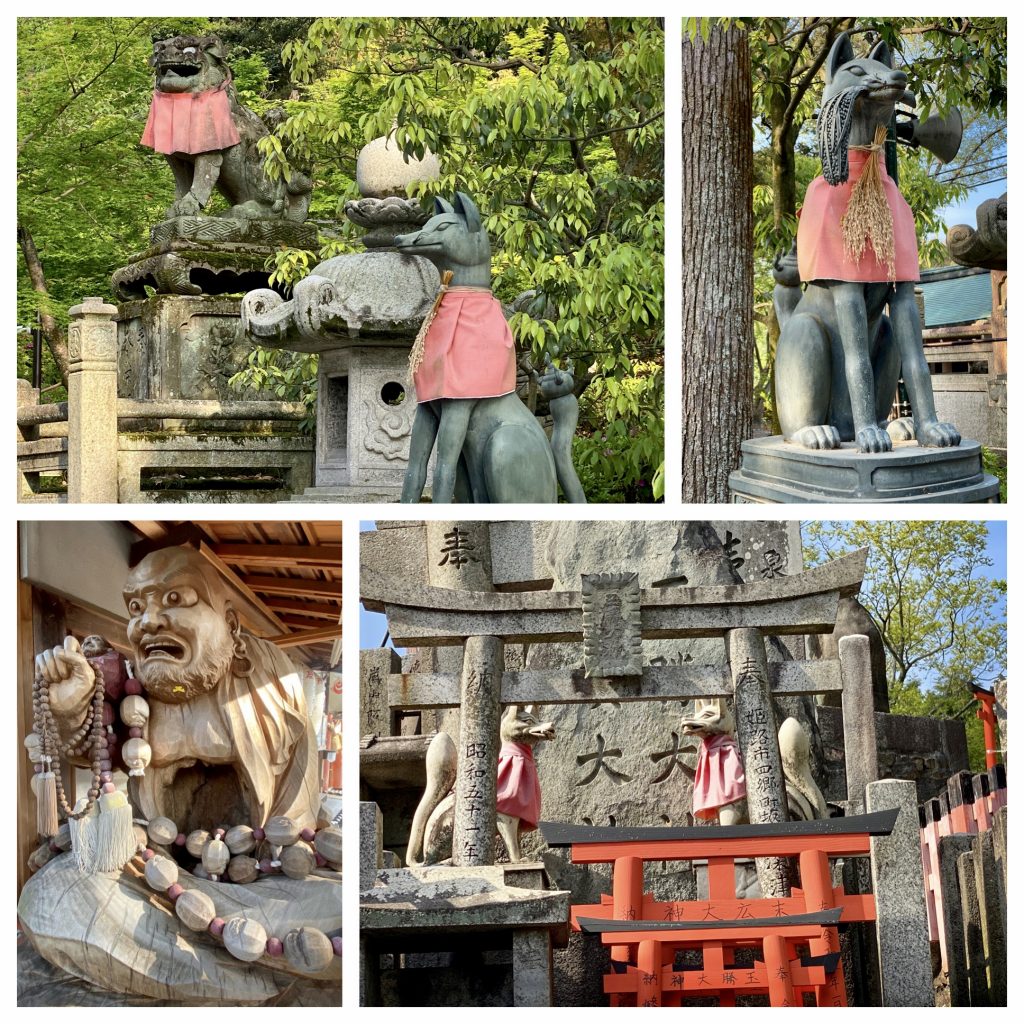 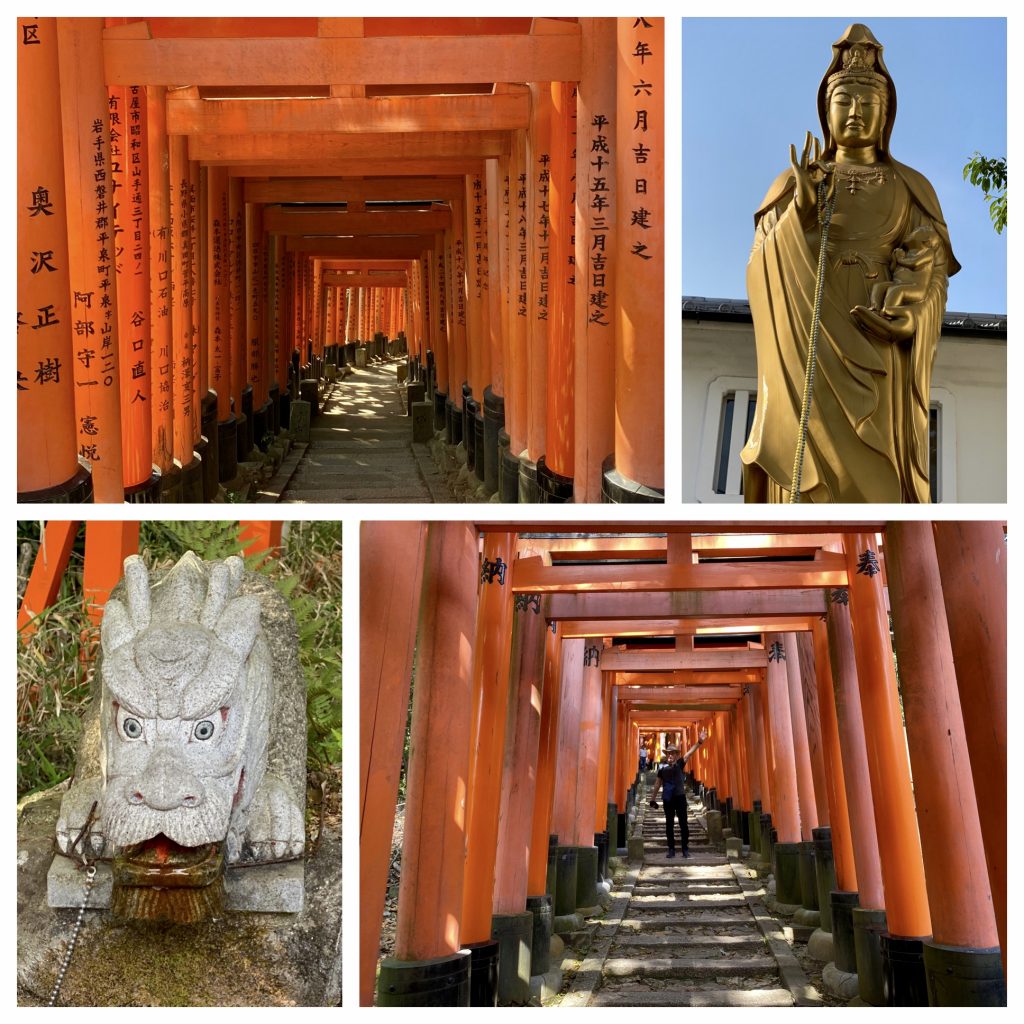 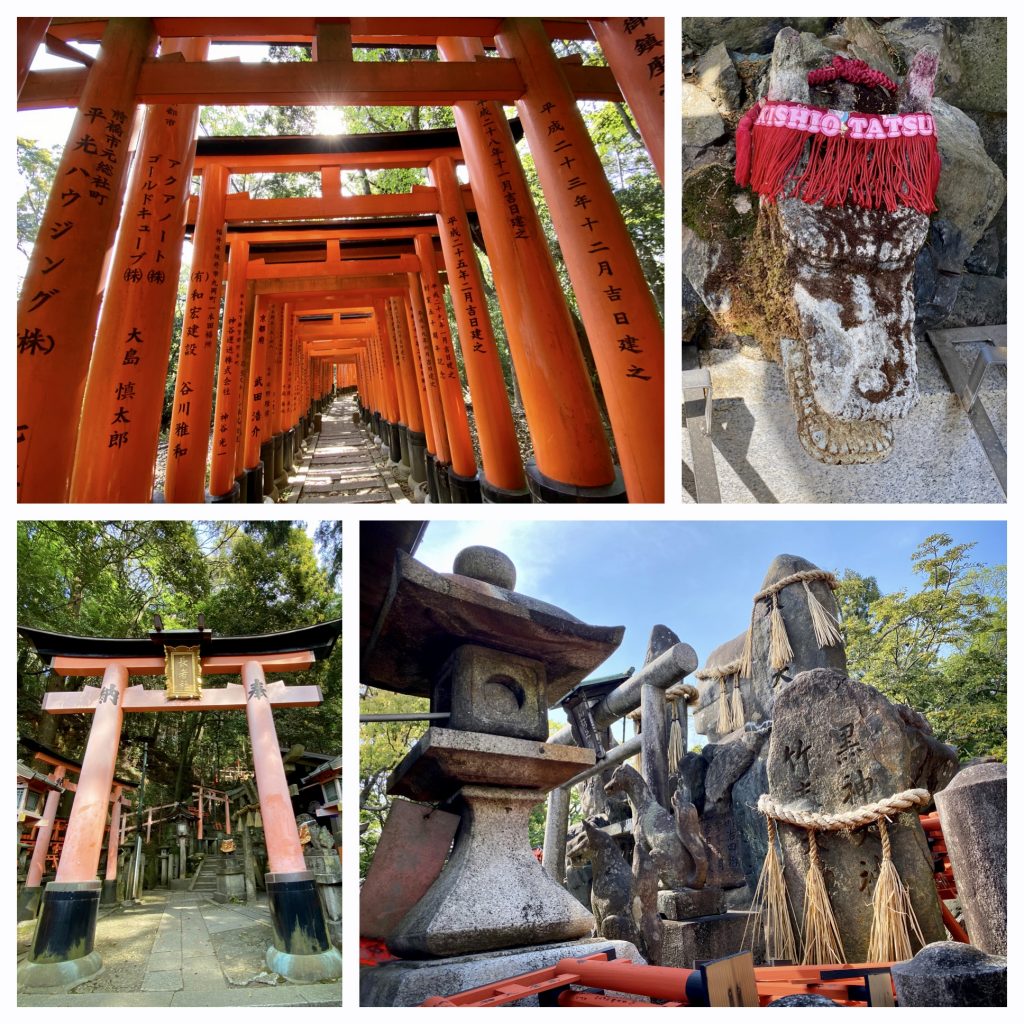 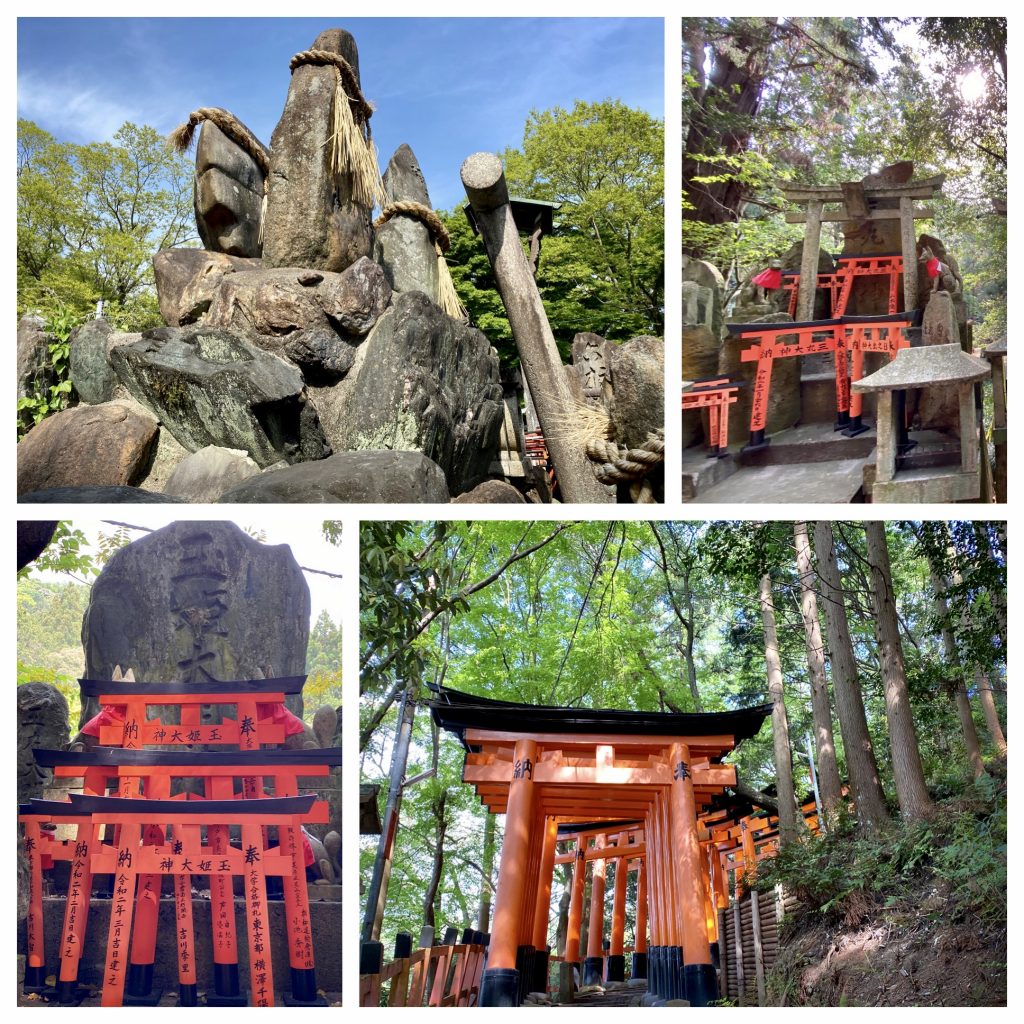 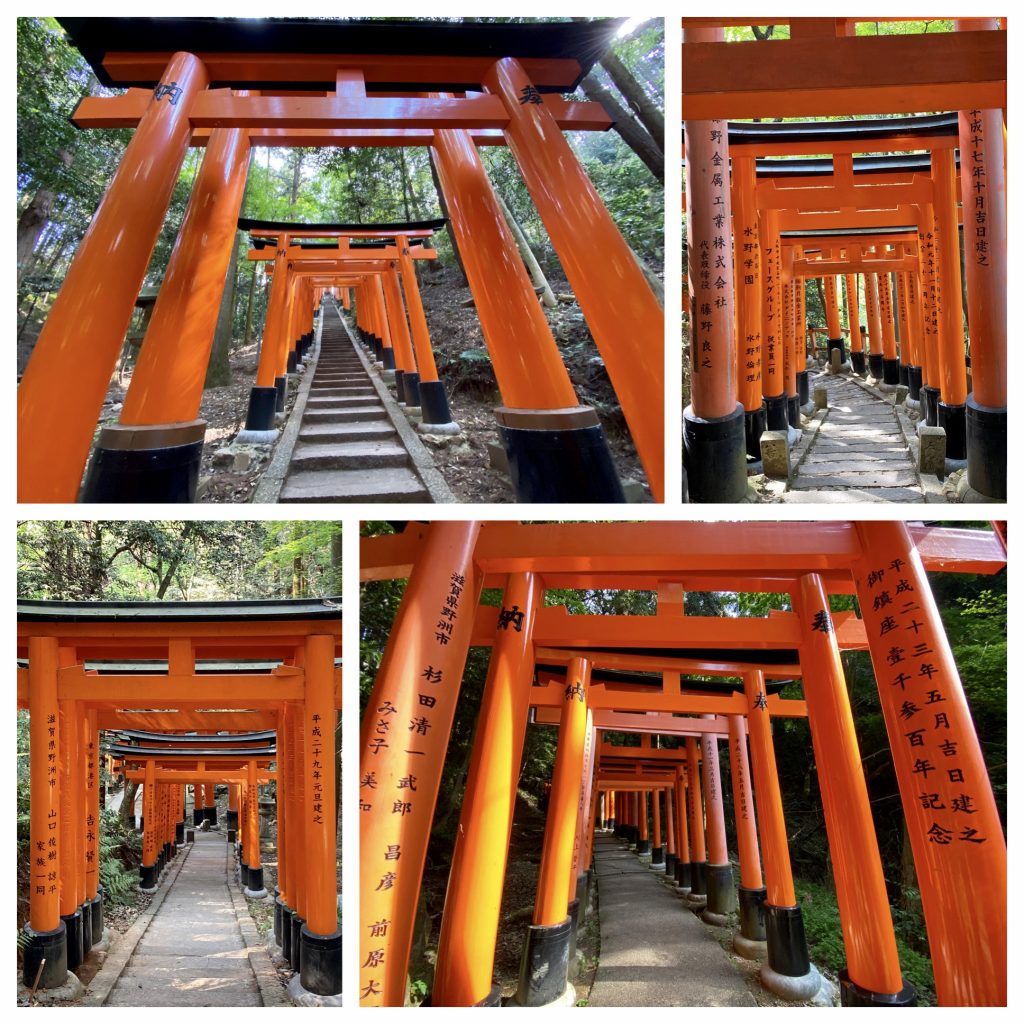 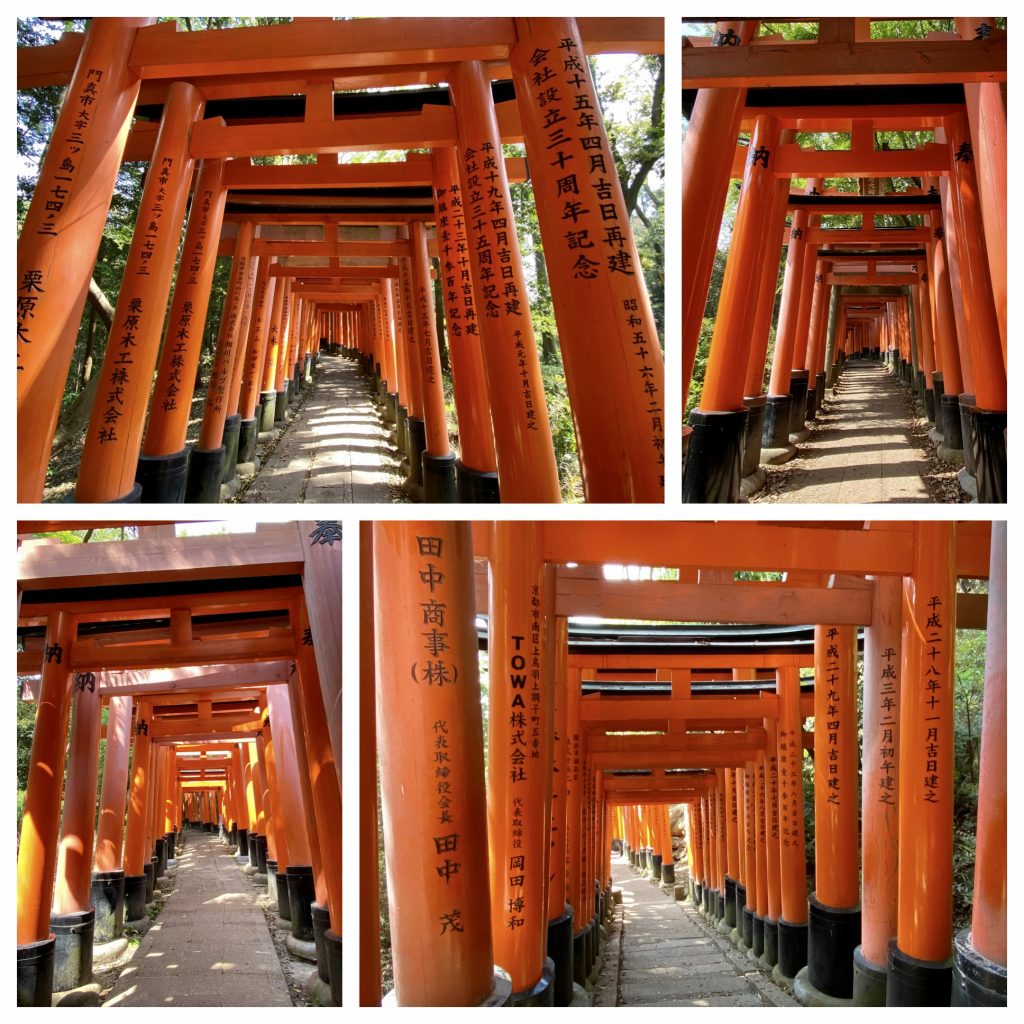 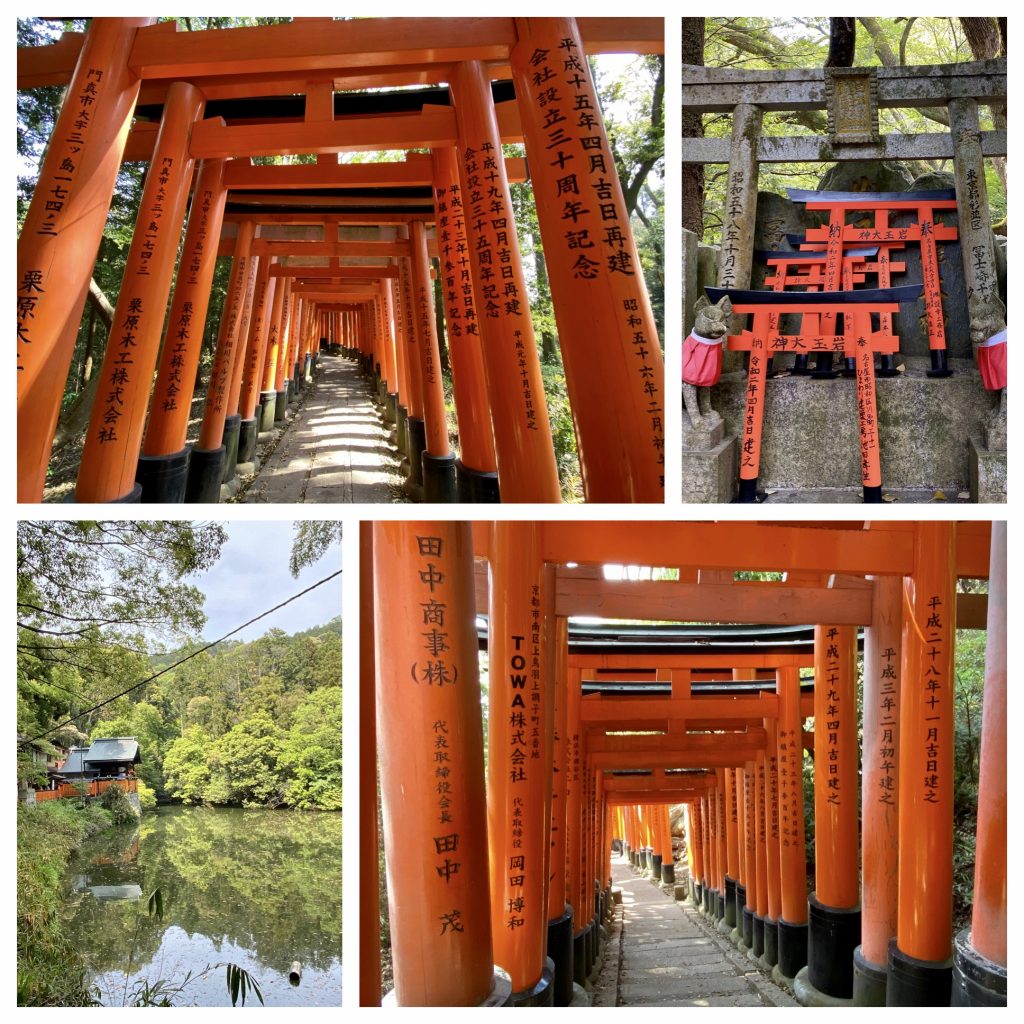 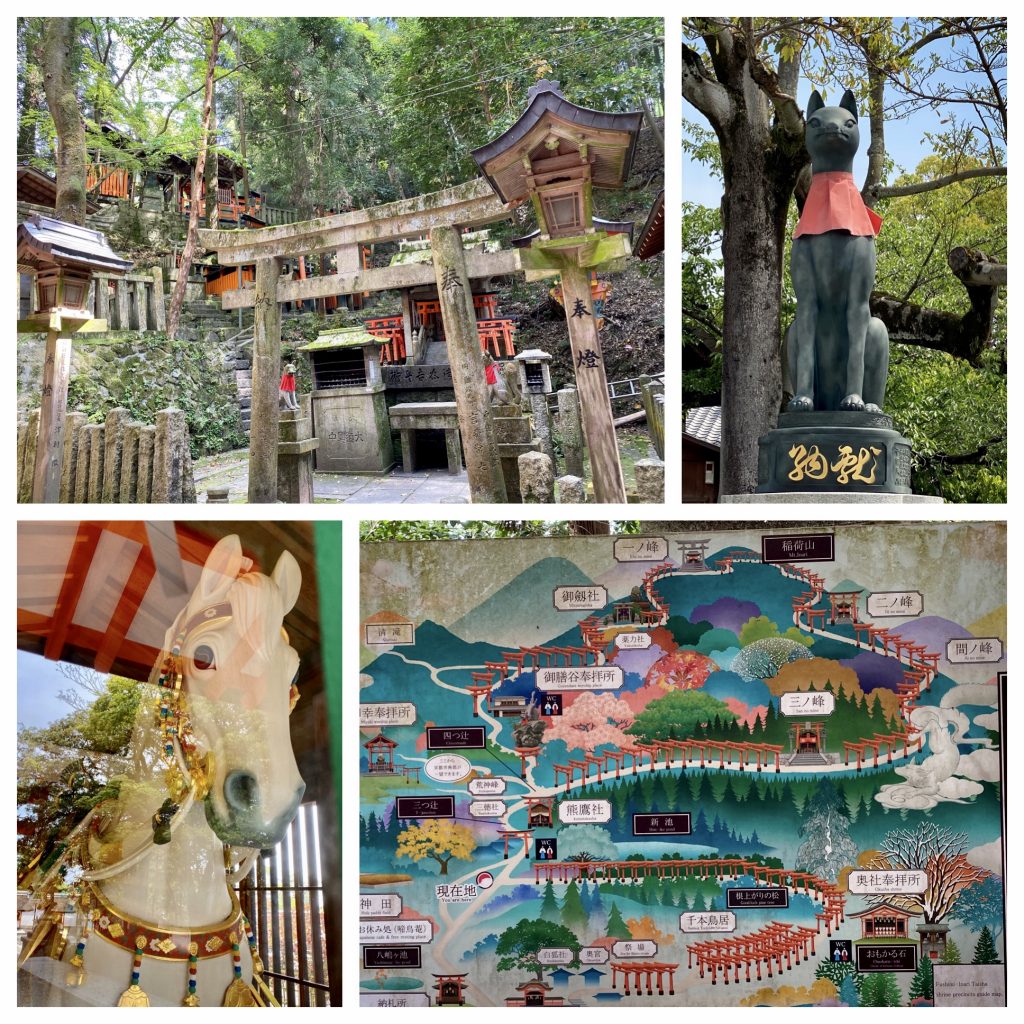 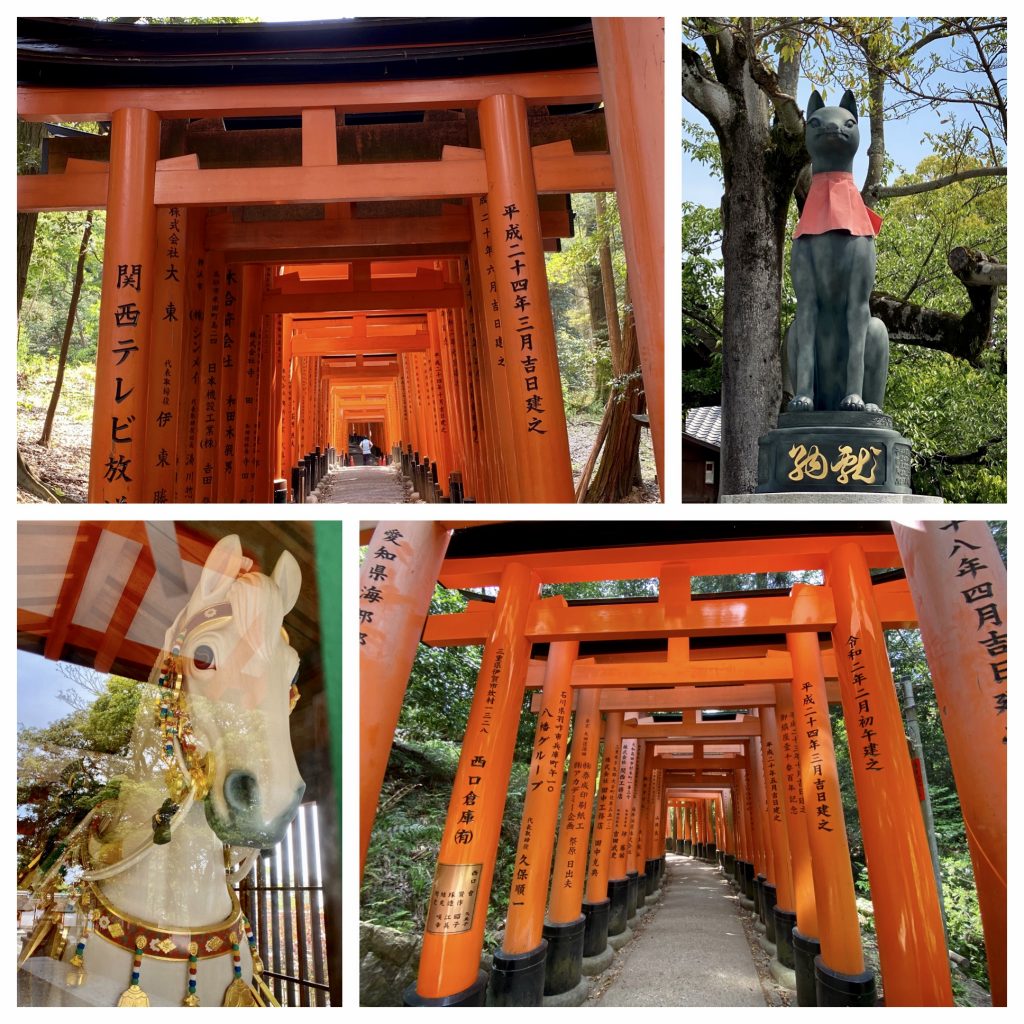 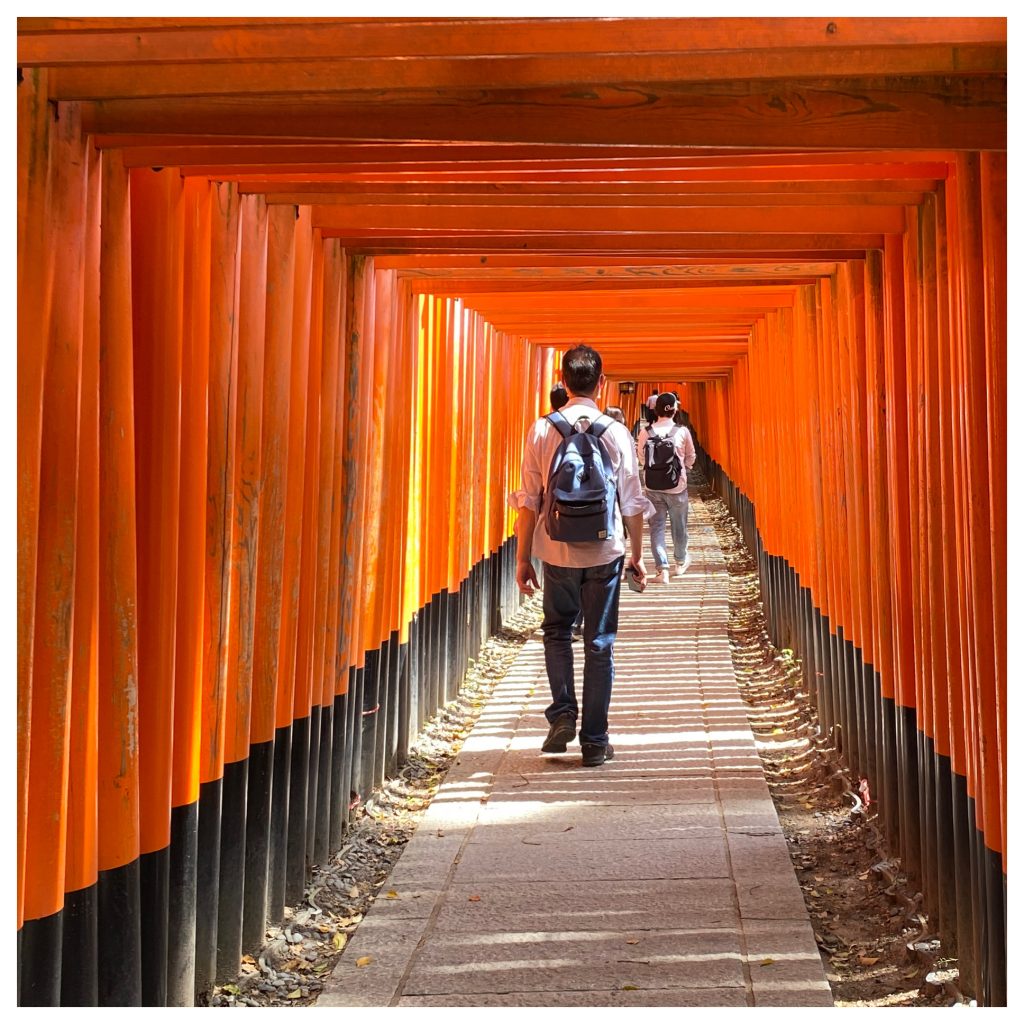 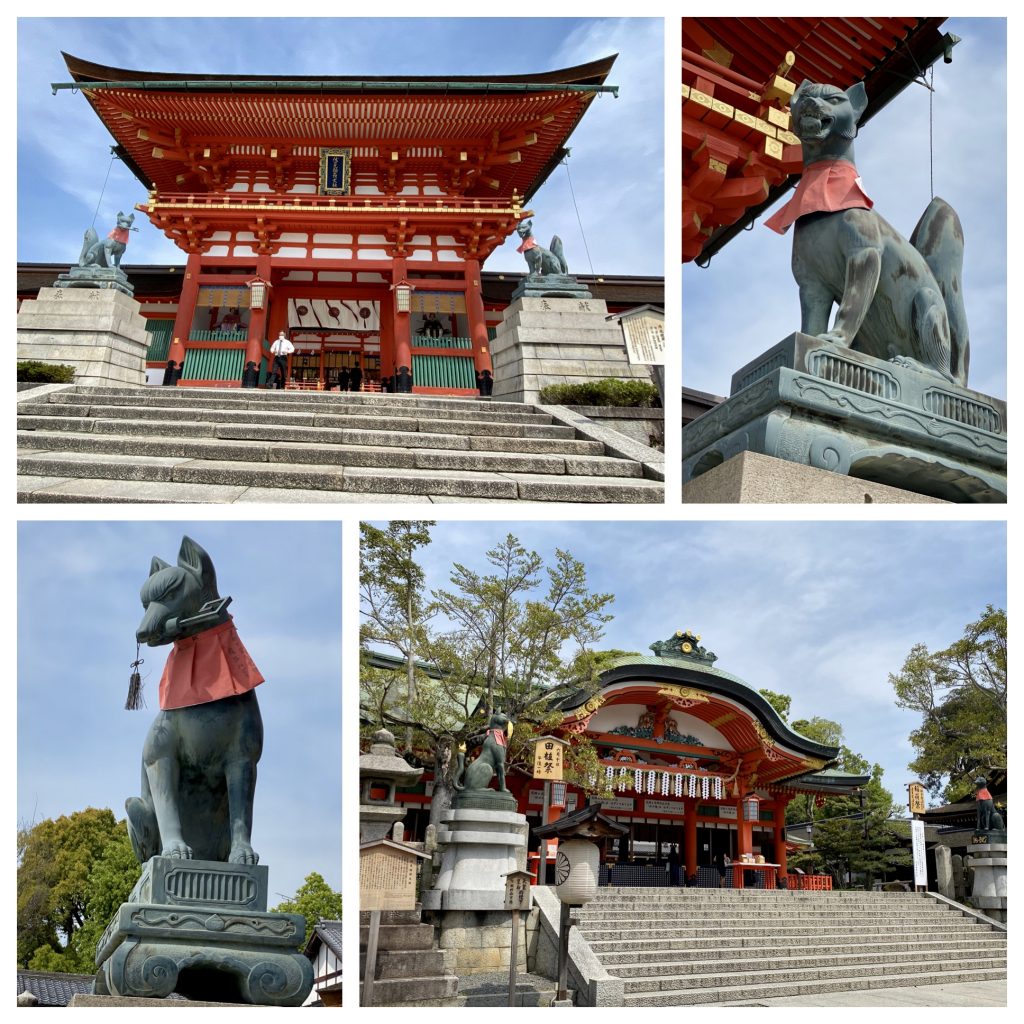 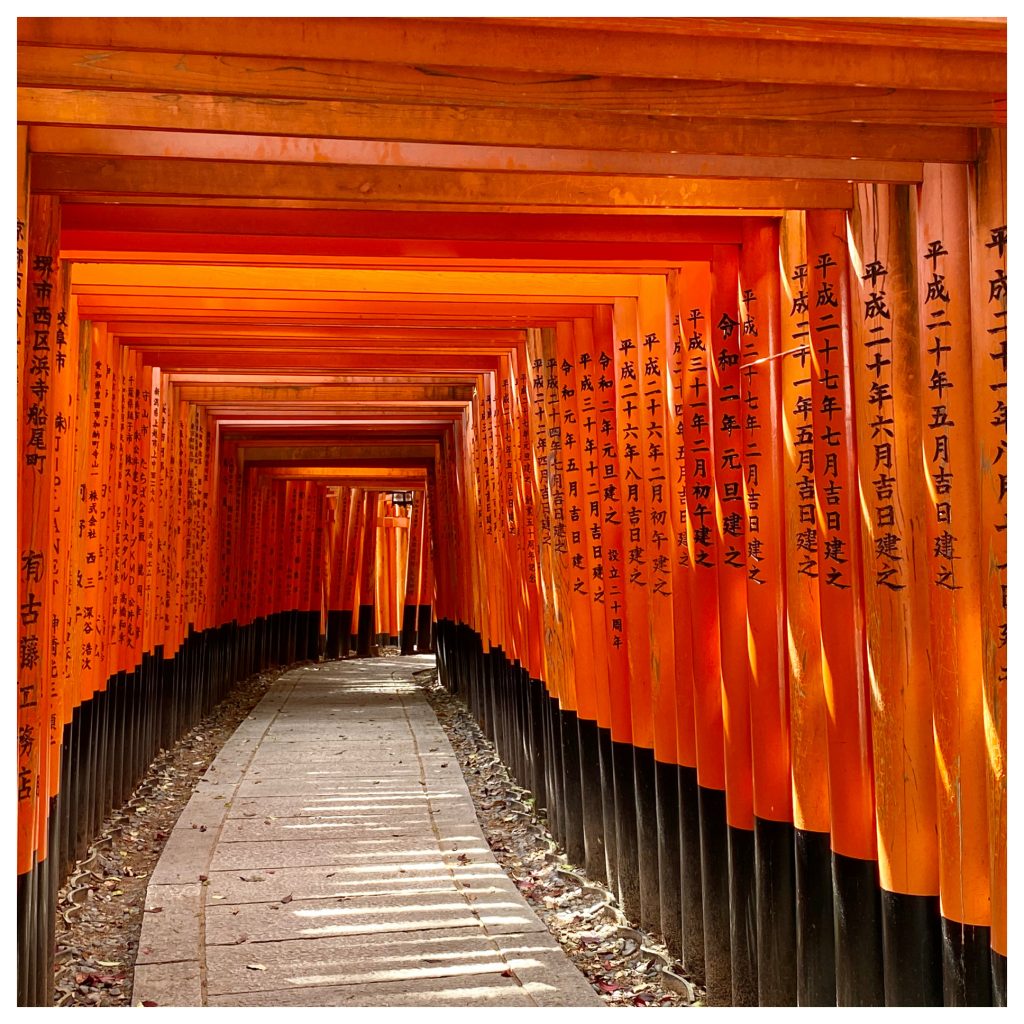 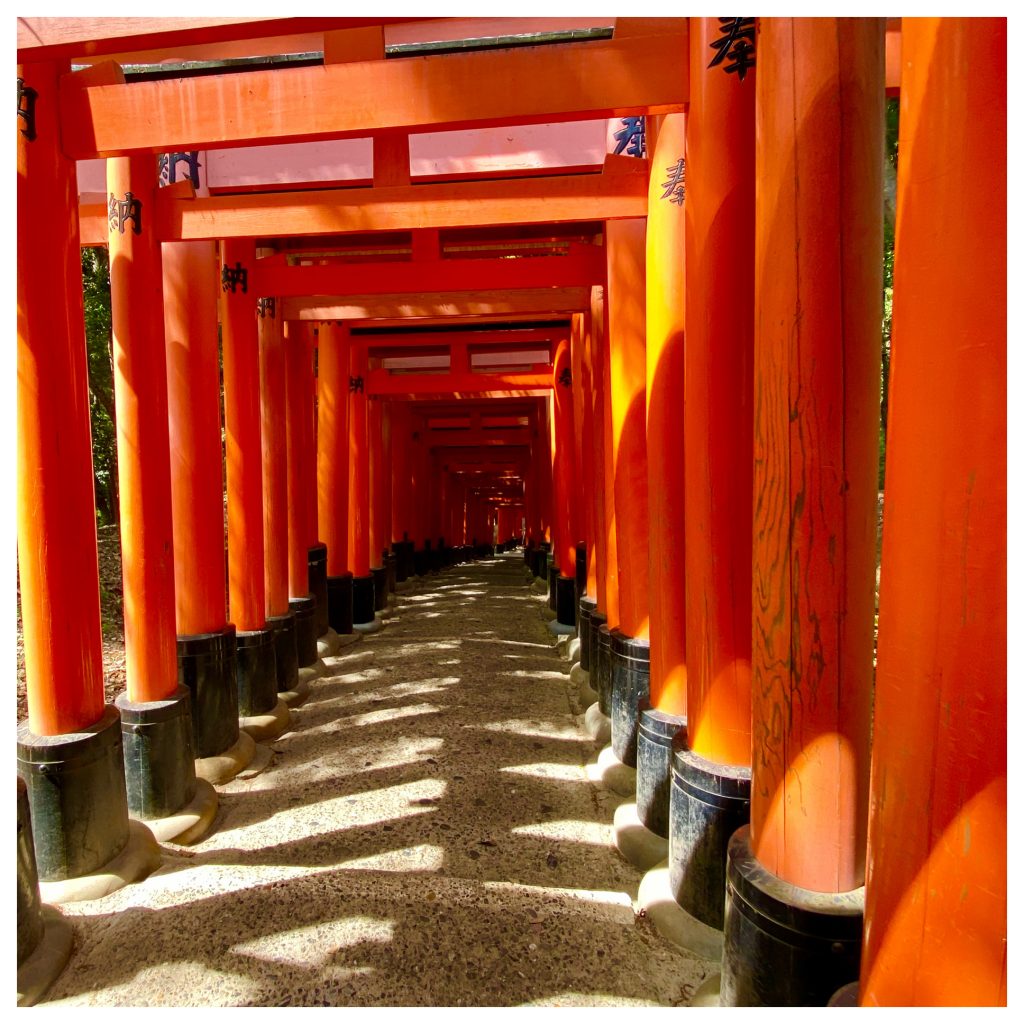 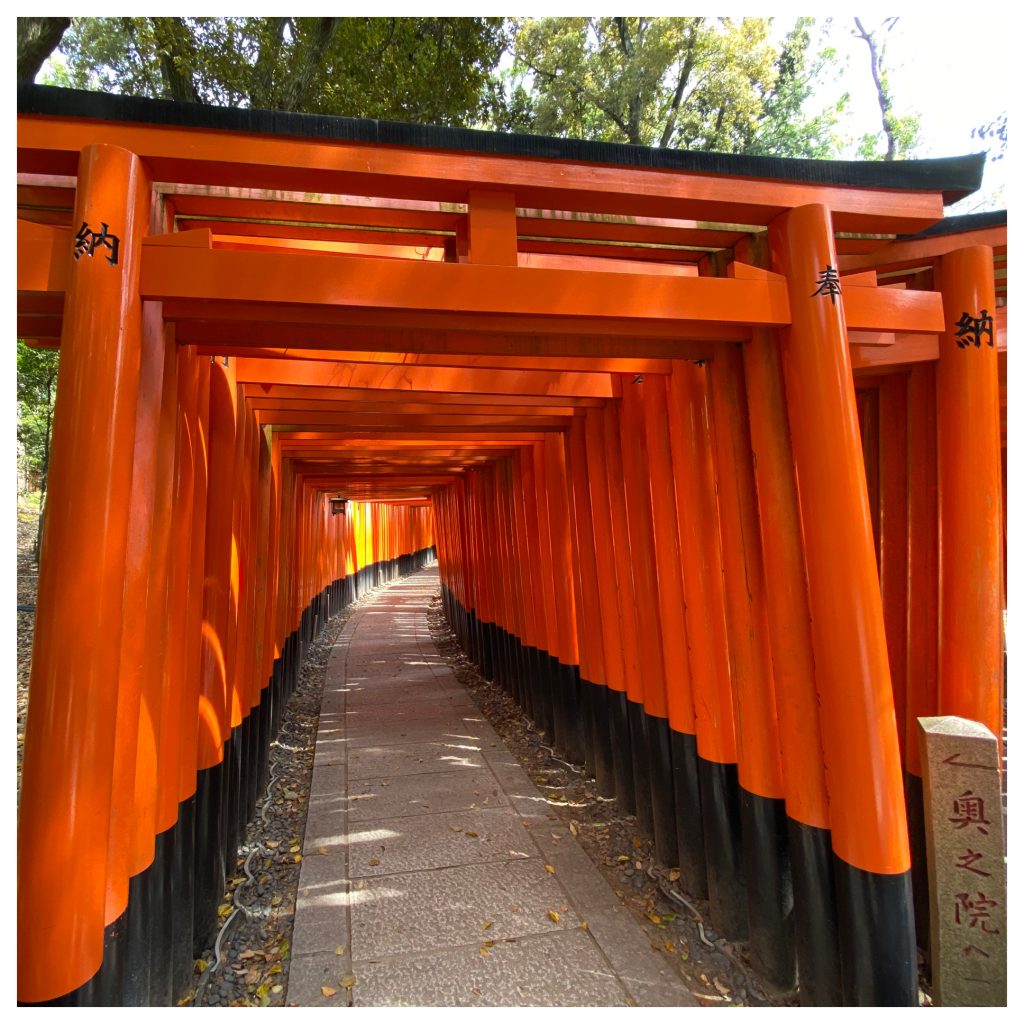 Days 45 and 46 – The Road To Enlightenment – Walking The Saigoku Kannon Pilgrimage – Collecting Our Bag In Shirahama and Walking Through The Red Tori Gates Of Fushimi Inari Mountain, Kyoto, Japan

Today we took an early morning train to the hotel at which we stayed at the beginning of our trip, in Shirahama, where we had left our bag for safekeeping.
We decided that since the hotel had closed, it would be best if our bag was with us now.
This would give us the flexibility of flying home early, if we were to decide that this was the right thing to do.

The train zoomed through many empty train stations, by closed factories and empty streets.
We talked about how much of Japan had closed down and changed, since we came here two months ago.

When we got to Shirahama, the sun was shining brightly and the weather was warm.
We were the only passengers who got off the train.
I explained to the taxi drivers who had gathered around us, mostly because they had no customers to drive, that we wanted to go to the Marriott.
They all nodded their heads, saying that the Marriott was closed.

I explained that we just needed to pick up a bag and come back to the train station.
The taxi driver took us to the hotel.
He was hesitant to drive through the barricades that said that the hotel was closed, but we had called ahead and let them know we were coming to pick up our bag.
The gardener helped us find the door bell and the front desk person came with our bag and unlocked the front door of the hotel.

When we returned to the train station, the two women at the ticket office were so surprised to see us again.
We bought our tickets back to Kyoto and were back in our apartment before dinnertime.

The next day was the hottest day since we arrived in Japan.
We decided to cheer ourselves up by going to hike the Inari mountain, to see the famous Fushimi Inari Shrine.

We have hiked this mountain before, and the path, which is covered with red vermilion Tori gates all the way to the summit and back down, always cheers us up.
It is a visual delight.
We brought with us a picnic lunch and tea, and felt grateful that most of the walk was shaded either by the forest or by the gates, because it was a very hot day.

The Fushimi Inari shrine is never without people, and even with the government’s stay at home request, we walked among many people who had come to enjoy the day out in the sun. There were many foreigners walking in groups of friends or couples, families who had come to hike, and many single people who had brought their lunch and picnicked on the benches.

The walk is a circular route, and after we made our way down, we found an open cafe.
It served grilled frozen lollipops, made from Kuzu root, green Matcha tea and raspberry red bean paste.
It was lovely to sit in the open cafe and try this food, which we had never seen before.

On the street, we met a young man who was a photographer.
We smiled at him and he gave us postcards of his photos.
He’s photographed clouds that look like a dragon, and fire flames that look so much like an Inari wolf.
We thanked him and complimented his art.
He seemed so happy suddenly.

All this personal human contact is so needed for many who live alone, who have no family left, who are lonely and want to interact with others.
The social isolation and current restrictions make this much needed human warmth unavailable to them.

After our walk, we decided to walk another eight kilometers back to our apartment instead of taking the train, to see how the city looks under a lockdown.

We passed by a busy barber shop.
Jules had not gotten a haircut in two months, and we decided to go in.
They gave him a careful and good haircut, and we felt happy to be resuming normal activities.

It was nighttime when we reached the center of Kyoto.
We had no more food in our apartment, because tomorrow we would be leaving Kyoto.
We decided to eat dinner at a restaurant instead.
We passed by a good noodle shop, where we saw them making their noodles by hand.

We thought to try a Hummus restaurant, but it was closed.
I remembered that when we lived briefly in Kyoto a few years ago, we had lunch at a fabulous Thai restaurant on the river.
It was a very popular place, but we were able to get a table and had one of the best Thai meals we had ever had, even including Thailand.

We walked towards the restaurant, and it was open.
We were the only diners in the place, and were a little surprised to hear the waiter tell us that there would be a cover charge if we wanted to be seated outdoors.
It was funny that they were keeping their rules, even when nobody was around.
But the outdoors was a bit buggy, with the hot summer night, so we chose to sit indoors on the cushions.
The meal was superb, and we felt so grateful and fortunate that they were open.

Before we left, the waiter, who knows that masks are hard to come by, offered us two free masks.
We told him that we have face masks and thanked him for his kindness.

It was a good day.
We let go of the stress by hiking during the red hot day, found a place to get Jules a haircut that did not fear us for being foreigners, saw lots of other foreigners at the Fushimi Inari Shrine, tried a grilled Kuzu ice cream and had a fabulous Thai dinner.
Tomorrow we will be leaving Kyoto and going north.

With endless love and tenderness,
Tali and Jules

1 Comments on “Days 45 and 46 – The Road To Enlightenment – Walking The Saigoku Kannon Pilgrimage – Collecting Our Bag In Shirahama and Walking Through The Red Tori Gates Of Fushimi Inari Mountain, Kyoto, Japan”