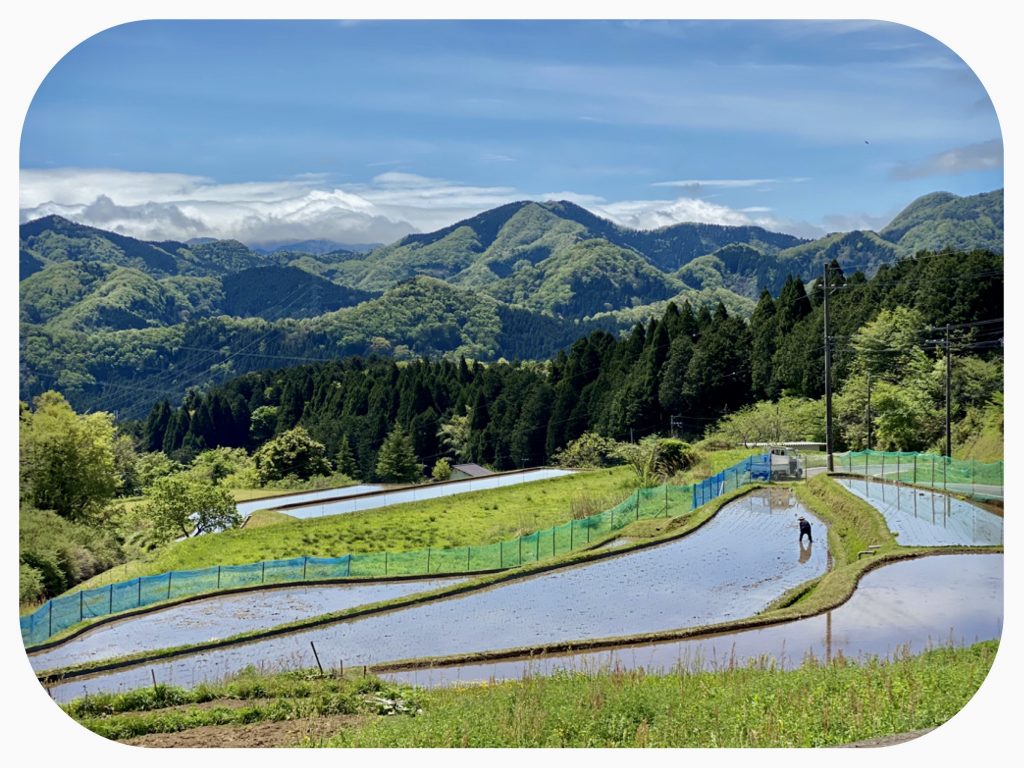 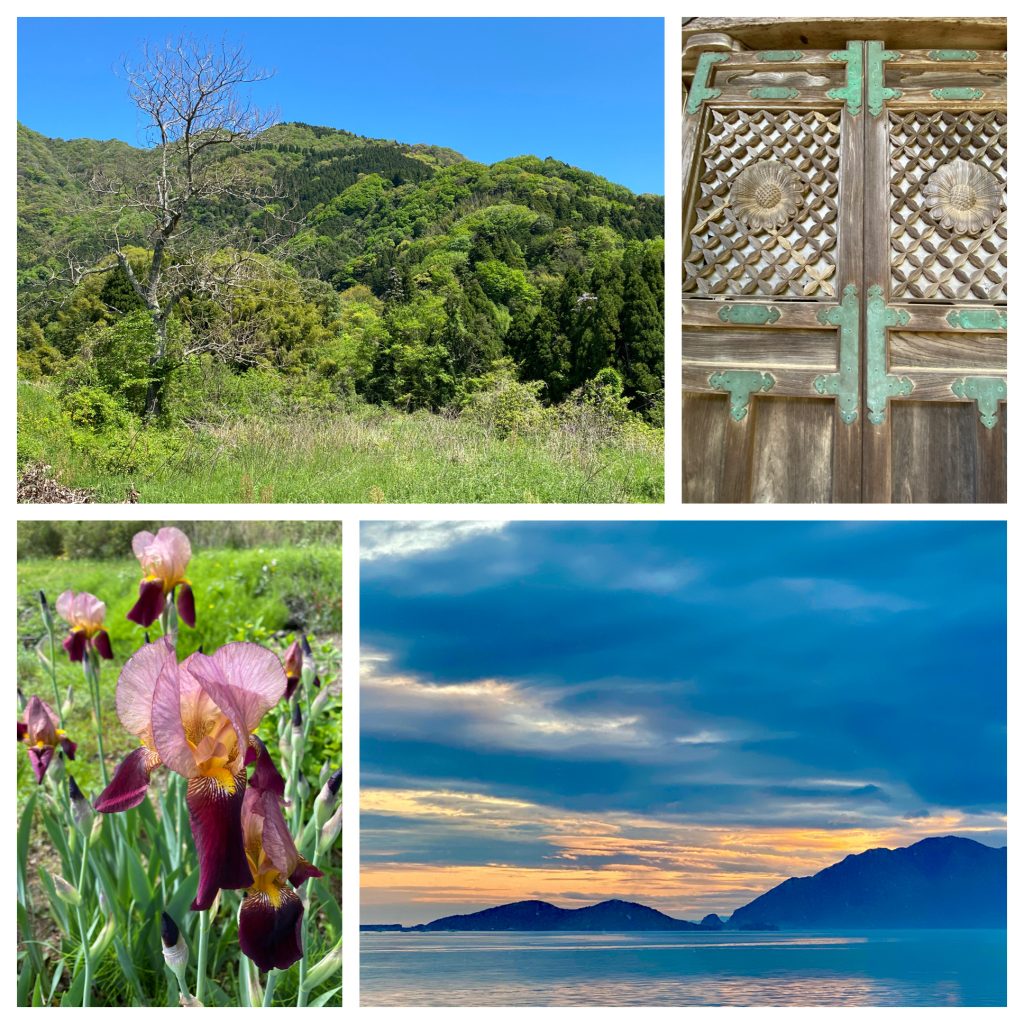 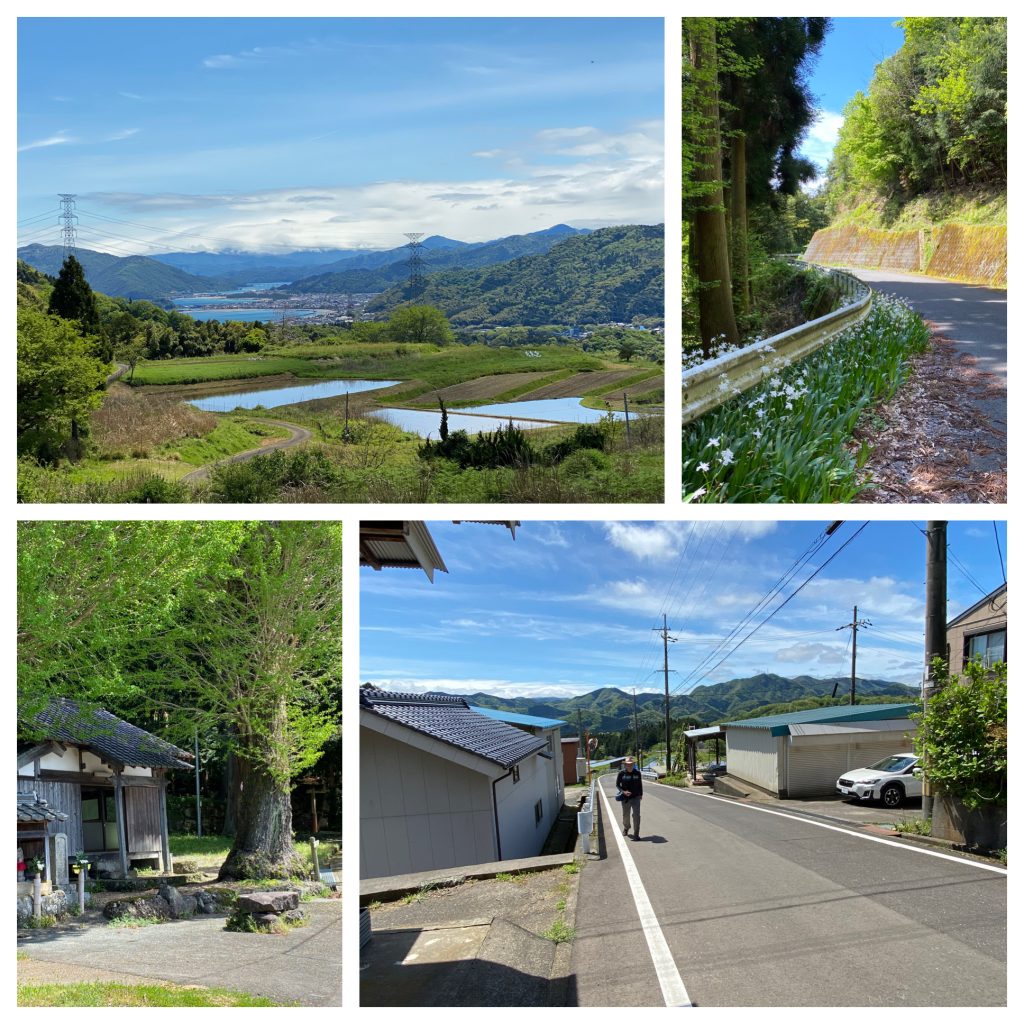 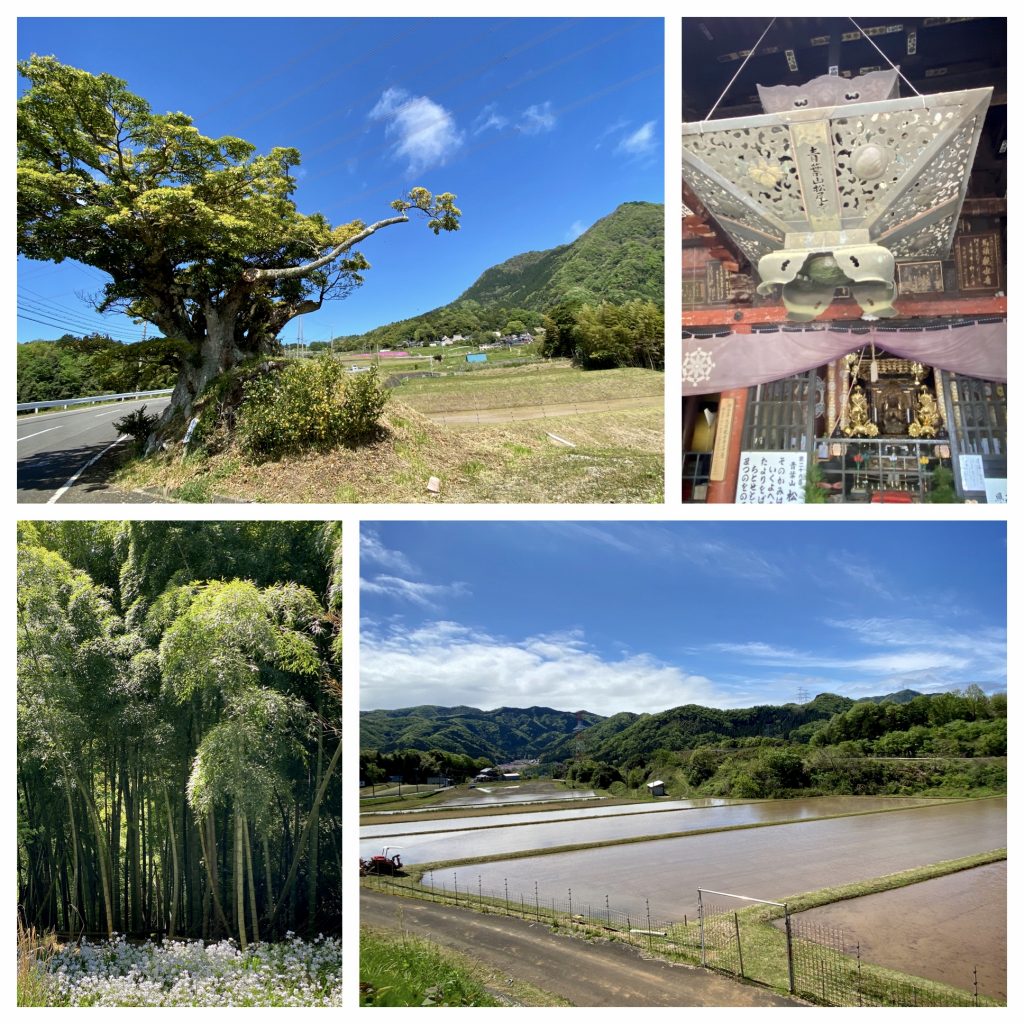 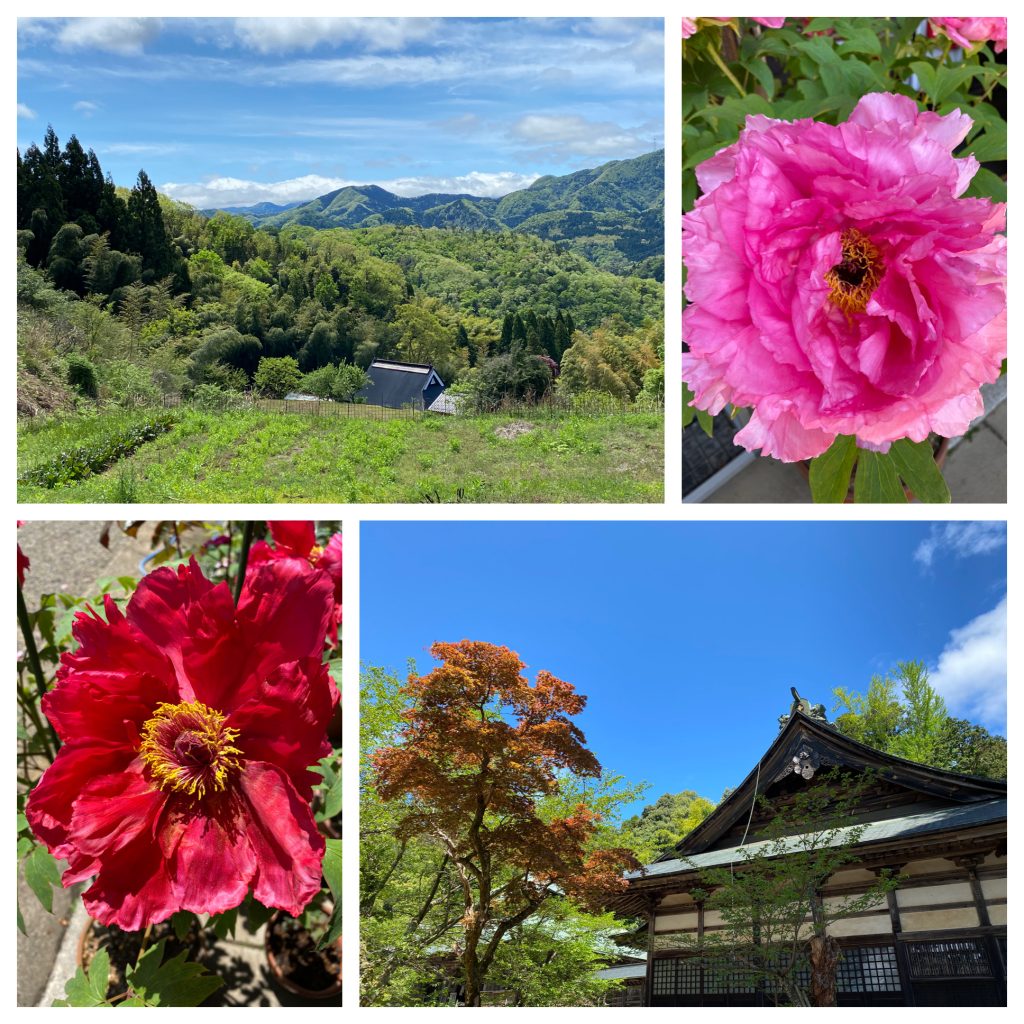 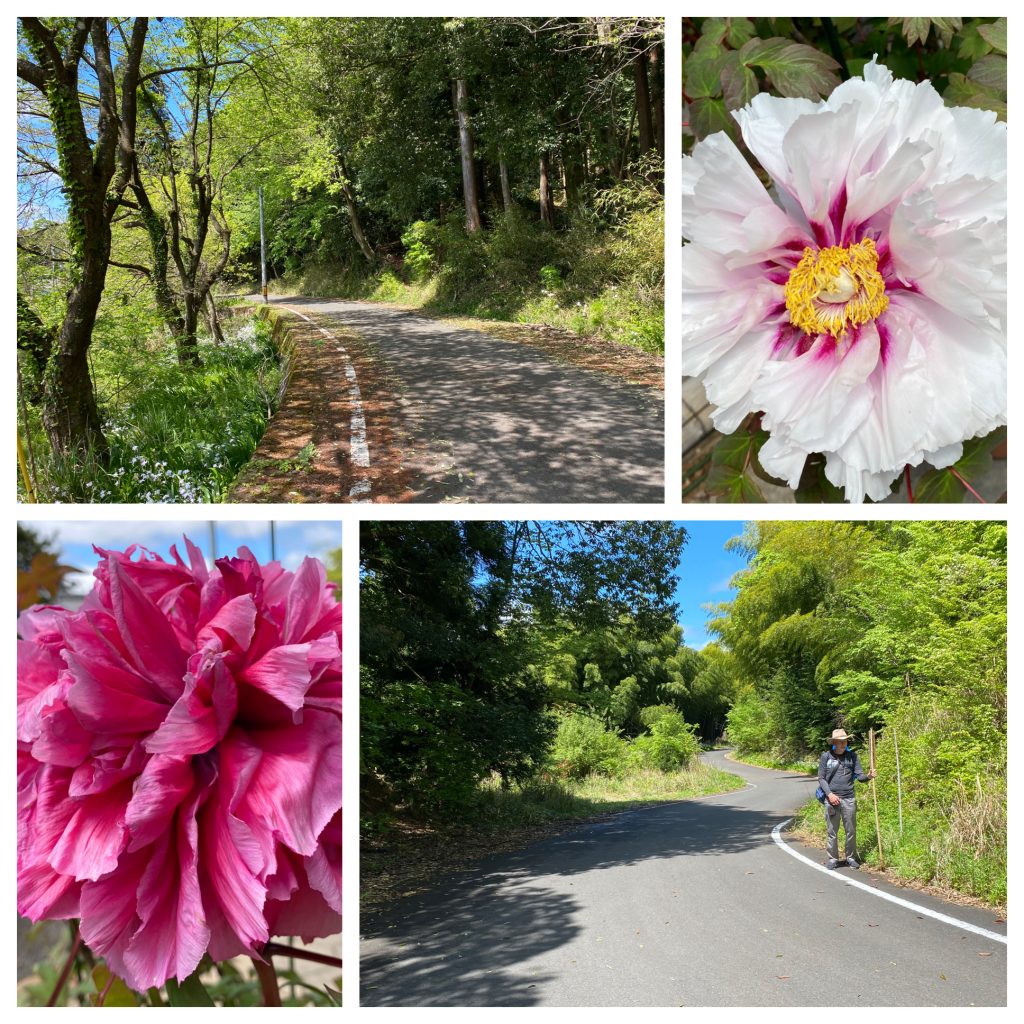 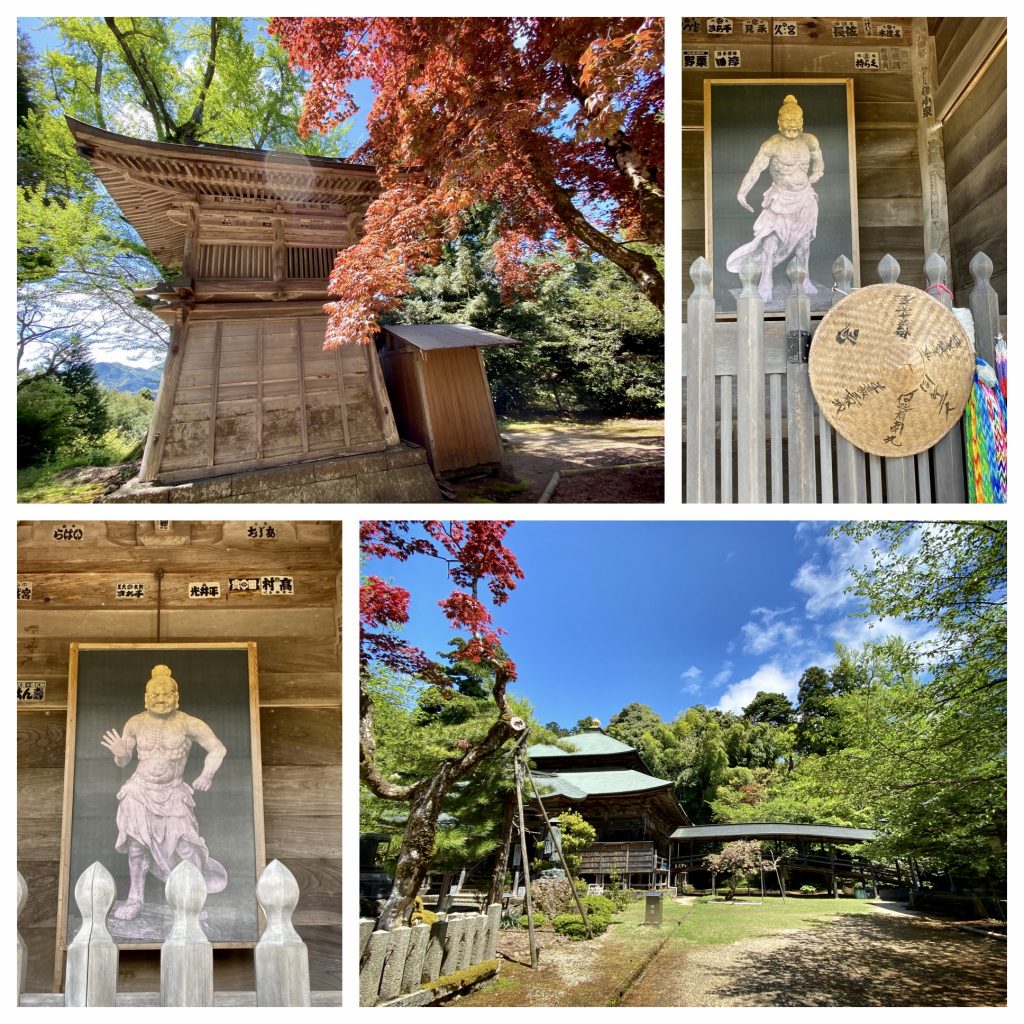 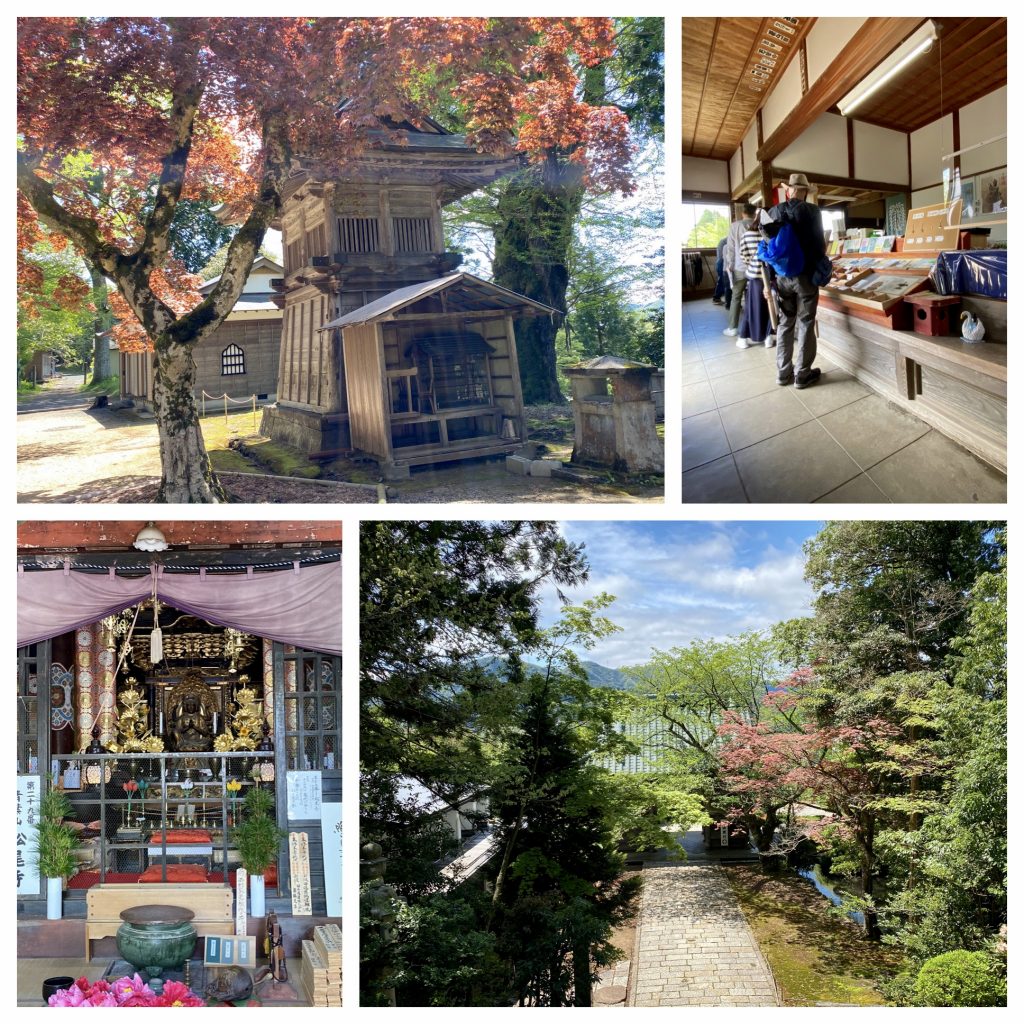 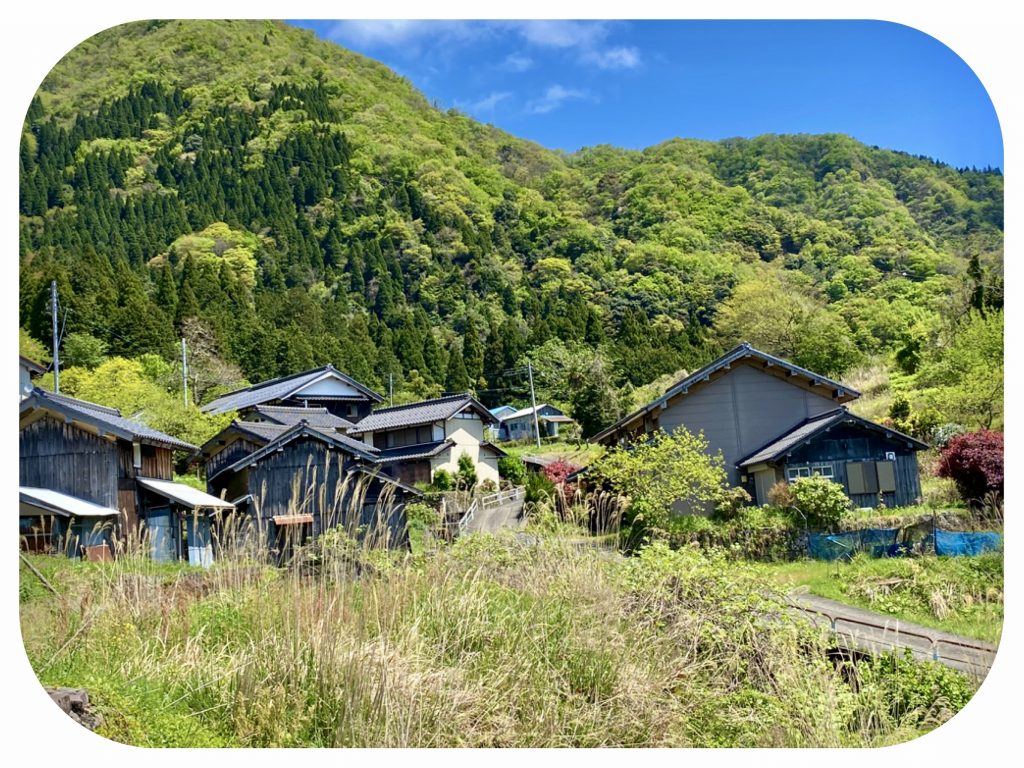 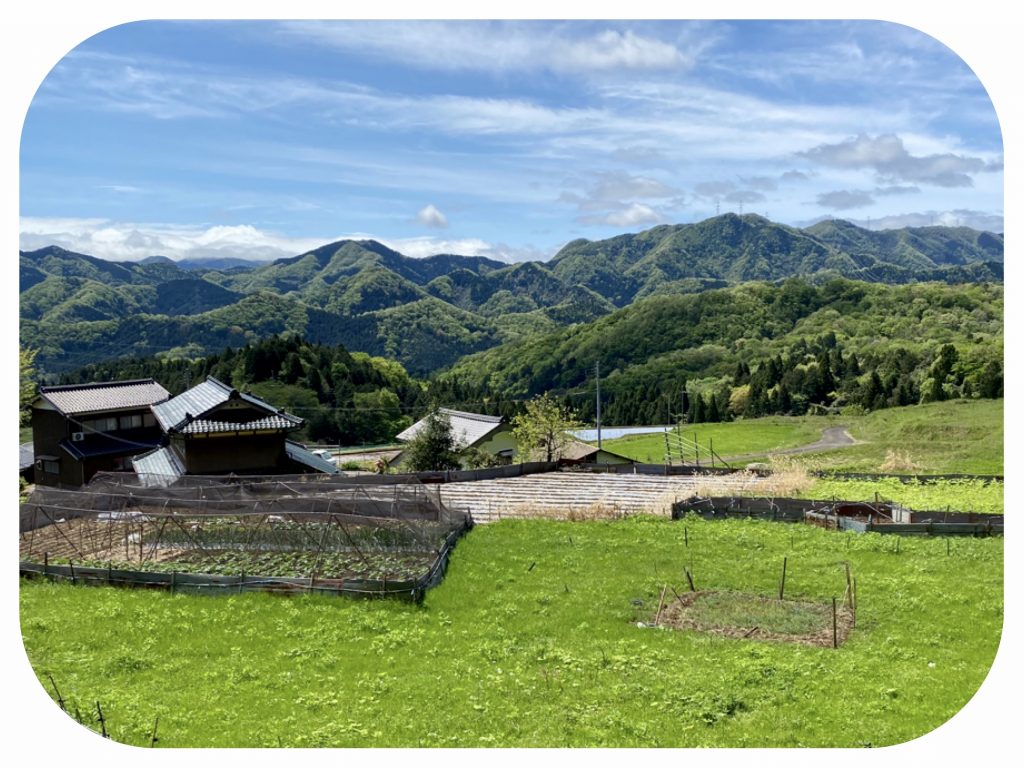 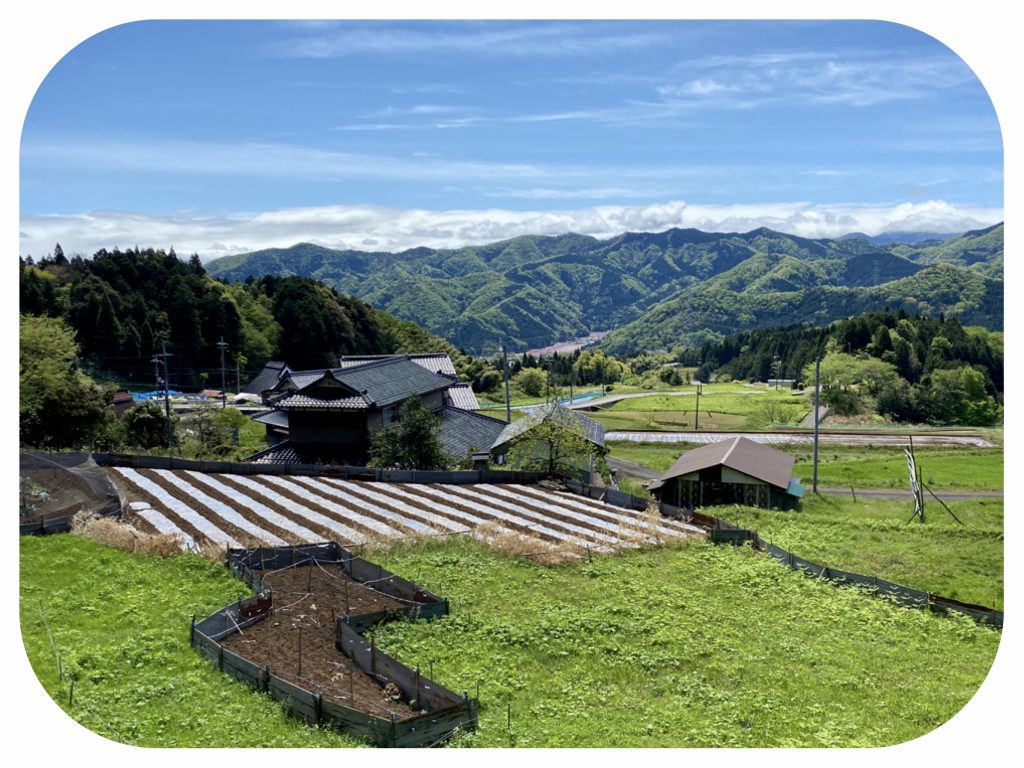 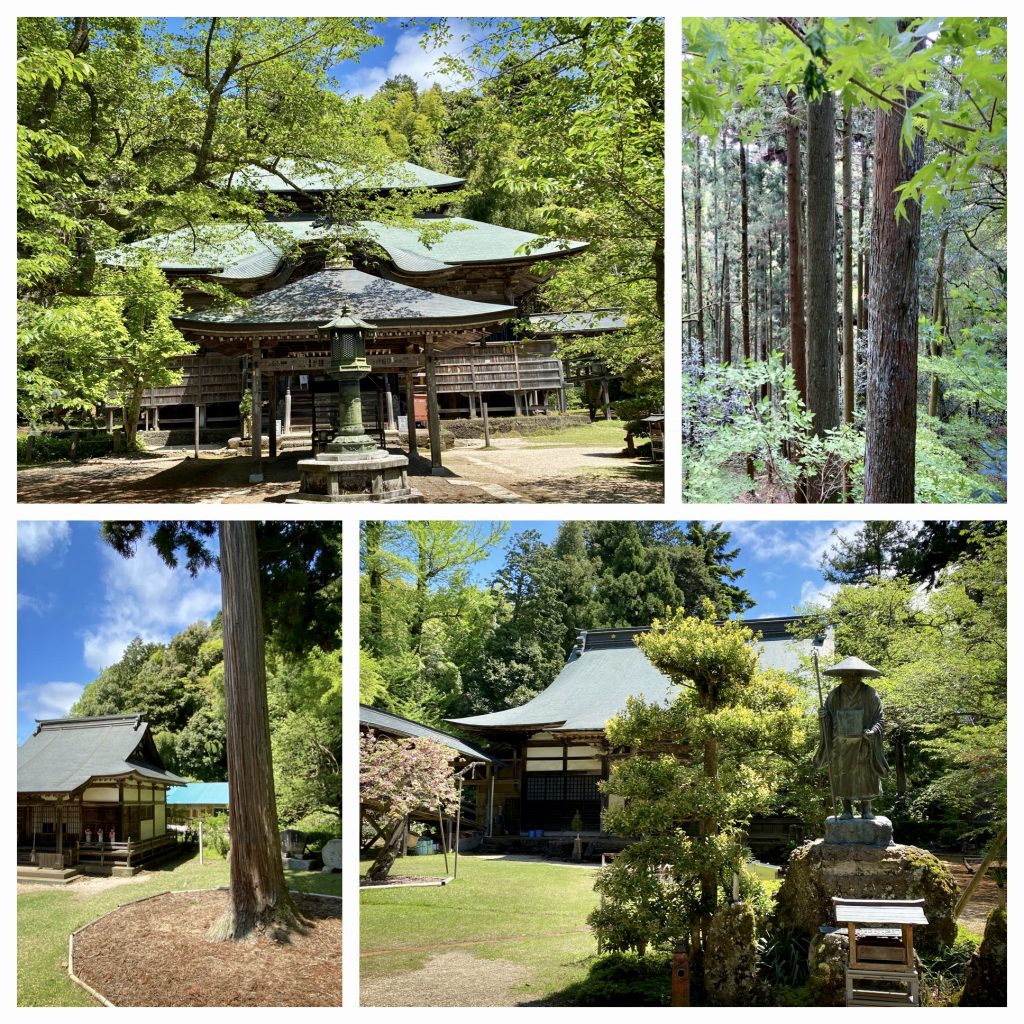 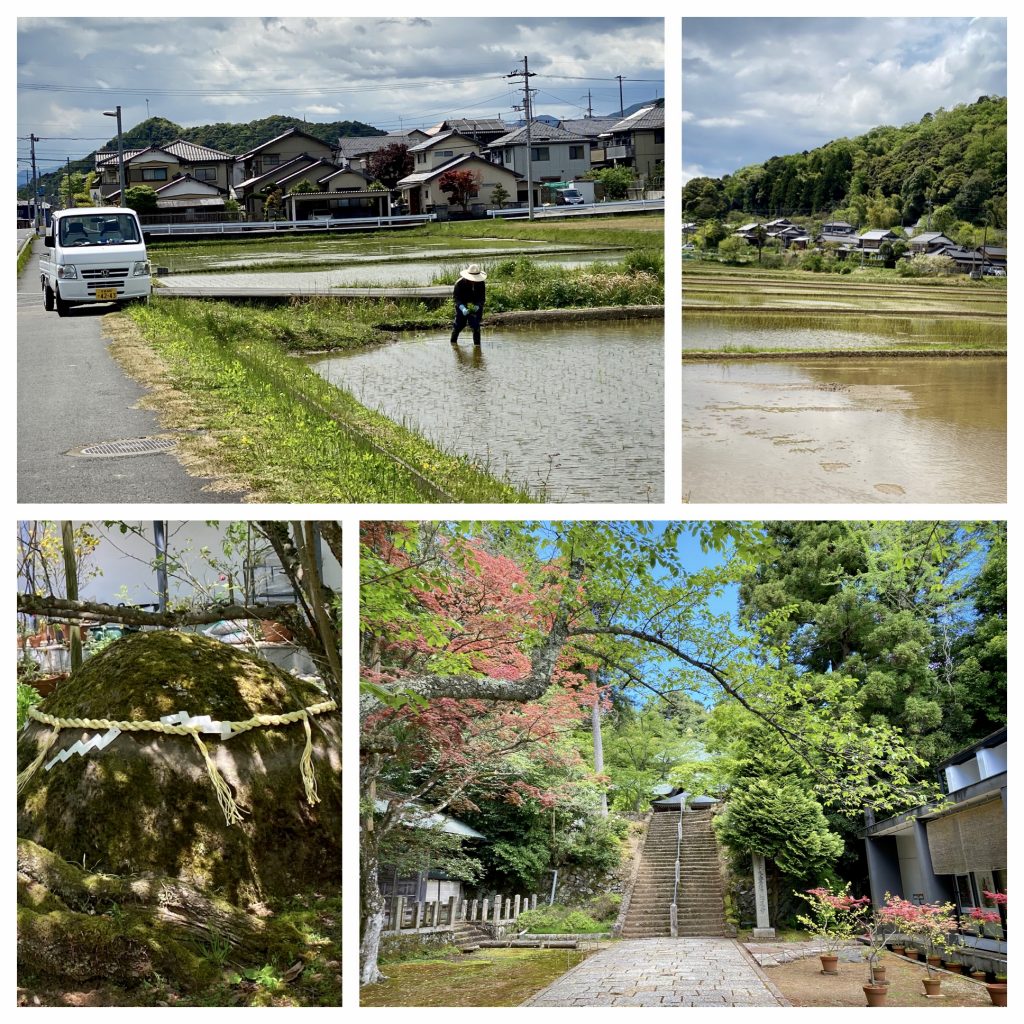 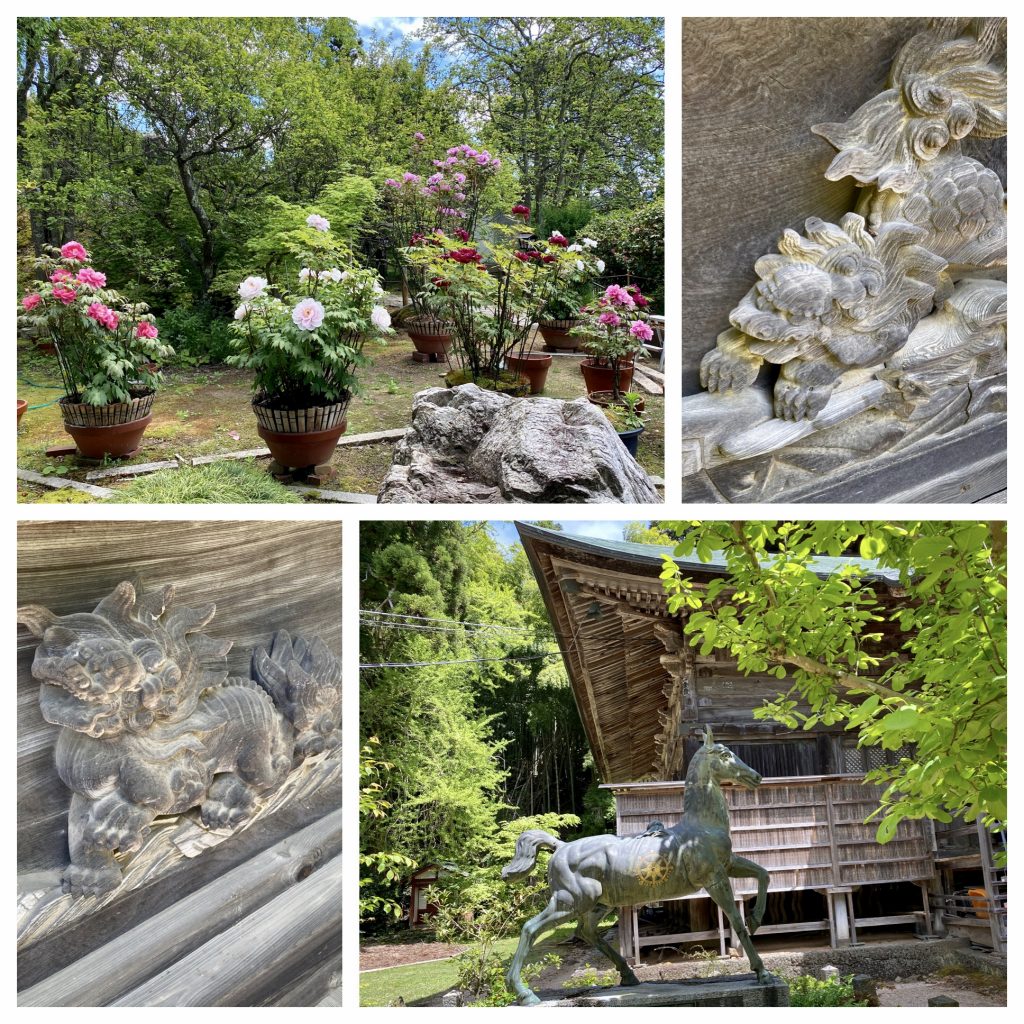 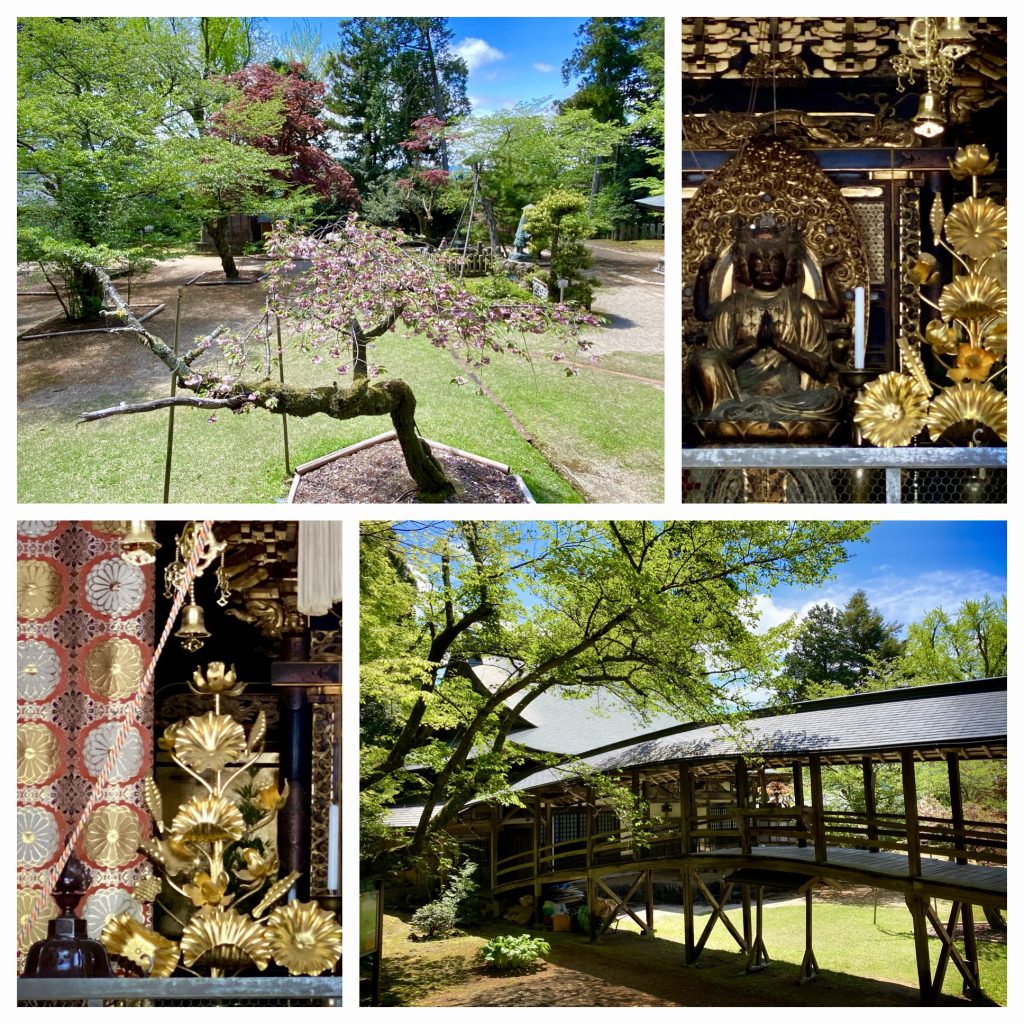 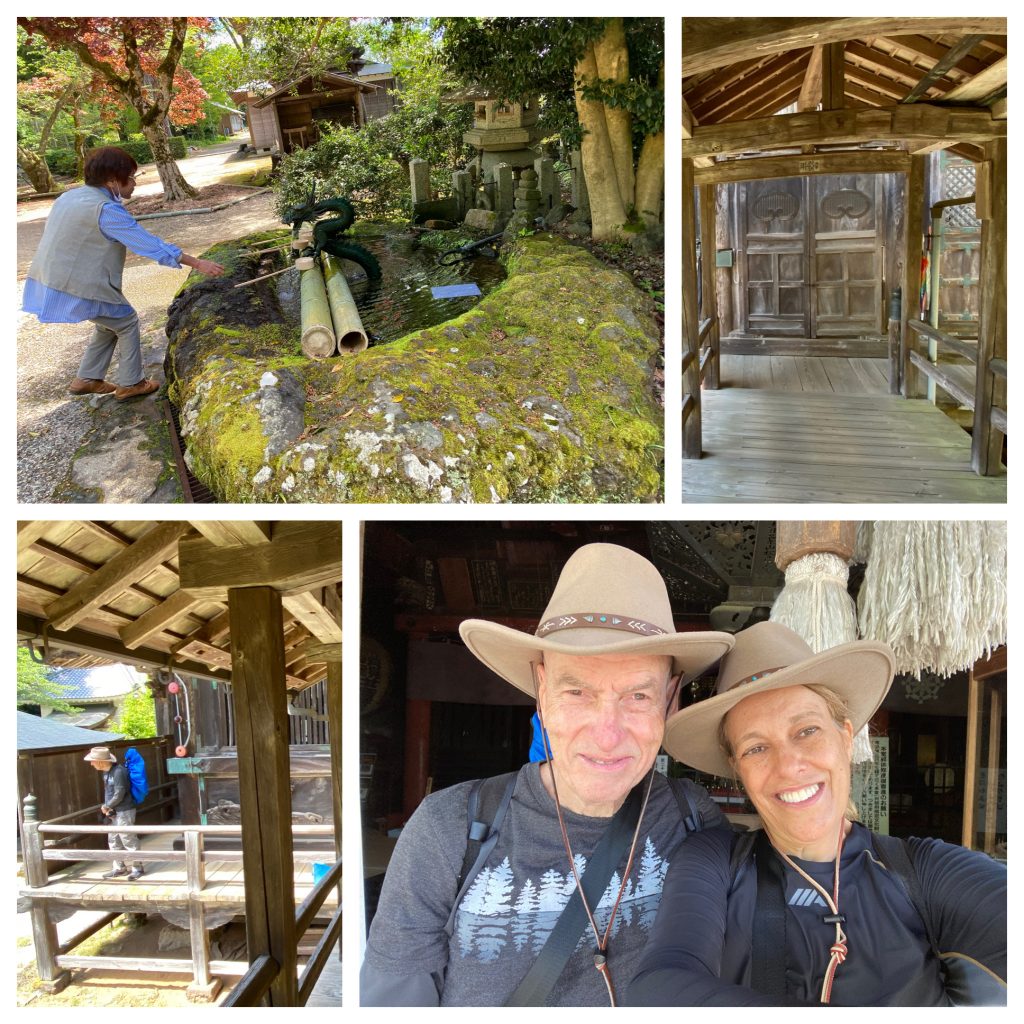 Just like that, summer is upon us.
It seems like just a few days ago, we needed to wear our warm fleeces.
But in the past two days, the heat has intensified so much that walking in the full sun made us a bit dizzy and tired by the end of the day.
Luckily, we did not walk in the full sun all day today, but climbed into the mountains where it was shadier and cooler.

We ate a lovely early morning breakfast in our hotel, and took the morning local train to the train station that we had stopped walking at the day before.
Then we started to climb Mount Aoba, where Matsunōo-Dera temple is located.

It was a steep path, winding between rice fields and small villages.
About a week ago, they were tilling the rice fields, and today we saw that they had already flooded the fields with water and were planting rice seedlings.

Some people used small, specialized tractors and some did it by hand, standing in the muddy fields in their gumboots, bending over and planting the tiny rice seedlings in the mud.

As we walked between the rice terraces, we saw small tadpoles, and heard the calls of frogs.

Matsunō-Odera, temple #29, is located about midway up Mount Aoba.
Because of the heat, we were hot and thirsty when we finally arrived at the temple.
The temple is very rural, and it had no vending machine to buy water.

The temple’s water supply was connected to a garden hose, and a sign said that we should not drink the water.
We had only brought with us hot water for tea, but we have trained ourselves to be able to go without food or water, so we ignored our thirst and looked for the main hall.

We had a moment of confusion when we saw that the main hall’s door was open, but nobody was inside.
There were a few tables with charms and amulets inside, but they were covered by a cloth.
I told Jules that I thought that the temple was closed.
I was resigned to the idea by now, that the temples we have left to visit might all be closed.

Jules told me to ask one of the ladies who was visiting the temple.
We asked two ladies and they told us that the temple’s office was down the steps from the main hall, by the gate.

We walked down and got our pilgrimage book and scroll stamped.
The monk was busy with people requesting a prayer, written in calligraphy on wooden sticks that they will later burn so the prayer can reach the Gods.

It was the first time on this pilgrimage that we had to stand in line to wait for our stamps.

We climbed back up to the main hall and chanted and prayed for the well-being of the human family all across the globe.
The temple had no benches in the garden to sit on, so we sat on the wooden stairs at the back of the hall, to have some tea and a slice of chocolate.

We decided not to bring any lunch with us, because our hotel gives us a really lavish and elaborate breakfast and dinner every day.

The temple belongs to the Shingon Sect of Buddhism.
Mount Aoba is a dead volcano, and it seems that a long time ago, it erupted and a molten flow of lava poured into the Sea of ​​Japan directly below the mountain, creating a tremendous amount of ash that sank into the seabed.

This steep mountain has been a place for Ascetic Monks to practice Shugendo from early on.

In the year 780, a Tang priest by the name of Wang Jiang wanted to build his hermitage in the mountains.
He remembered that that there was a two peaked mountain that was steeped in spirituality called Mt. Aoba, and he climbed the mountain.
He felt the presence of the Goddess Kannon, and built his hut under the endlessly spreading pine trees of the forest.

In 1119, Emperor Toba made a pilgrimage to the temple and later sponsored it.
The temple was burnt by repeated fires, but each time it was reconstructed by two prominent families, and the “modern” main hall was last rebuilt in 1730.

The main image in the temple is of a horse head Kannon, which is the only Kannon statue of its kind in the 33 sacred Saigoku temple sites.

A Poem from the temple:

“Sometime, look at the end of the flower tree
Aoba mountain is all-green
The green color is cool
it is the color of a ghost.

Autumn in Mount Aoba
Autumn leaves are so red,
I thought they were dyed.”

We walked down the mountain by way of another road.
The natural landscape was very beautiful, with many forested mountain peaks all around us.

When we reached the valley, it was full of rice fields.
We finally found a vending machine and bought some water to drink.
Then we continued our walk until it was time to call it a day.
We were so overheated that we slept on the train ride back to our hotel.

We took showers, did our laundry and had another fabulous dinner in the hotel’s restaurant.

We were asleep the minute our heads rested on the pillows.
With love and endless tenderness,
Tali and Jules