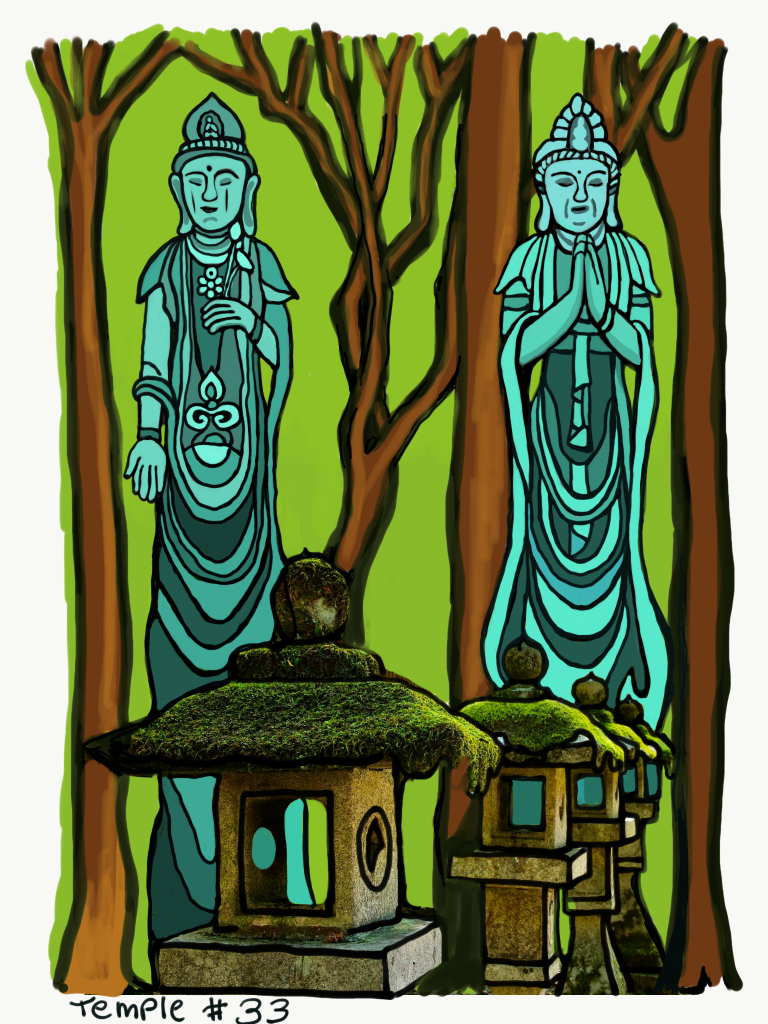 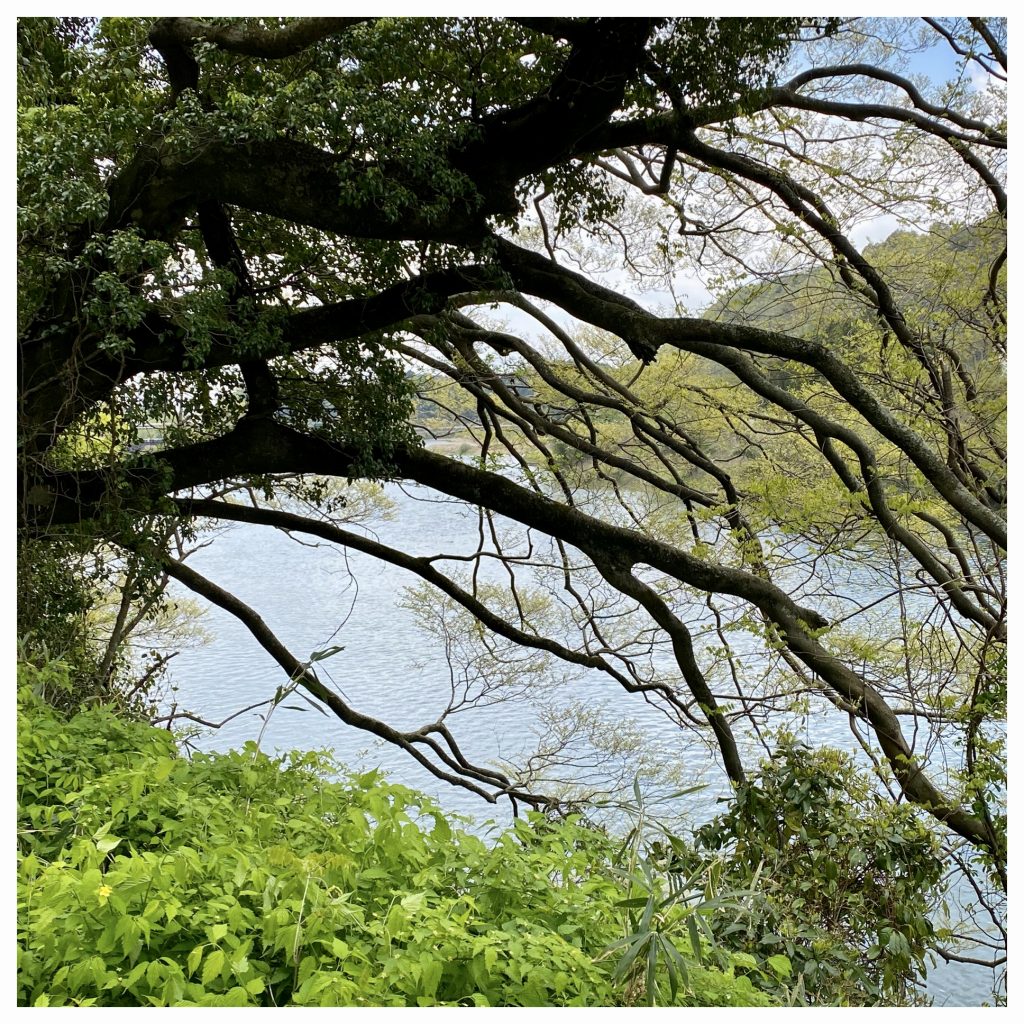 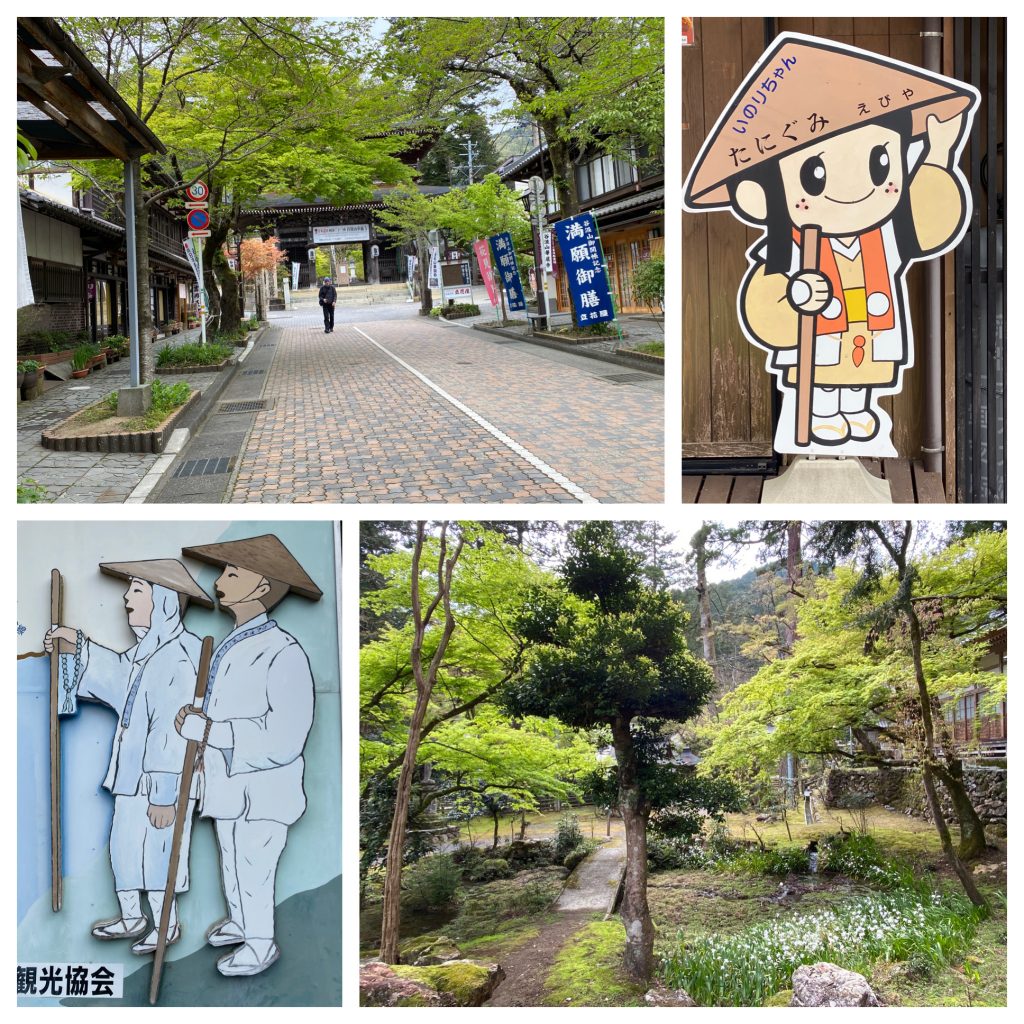 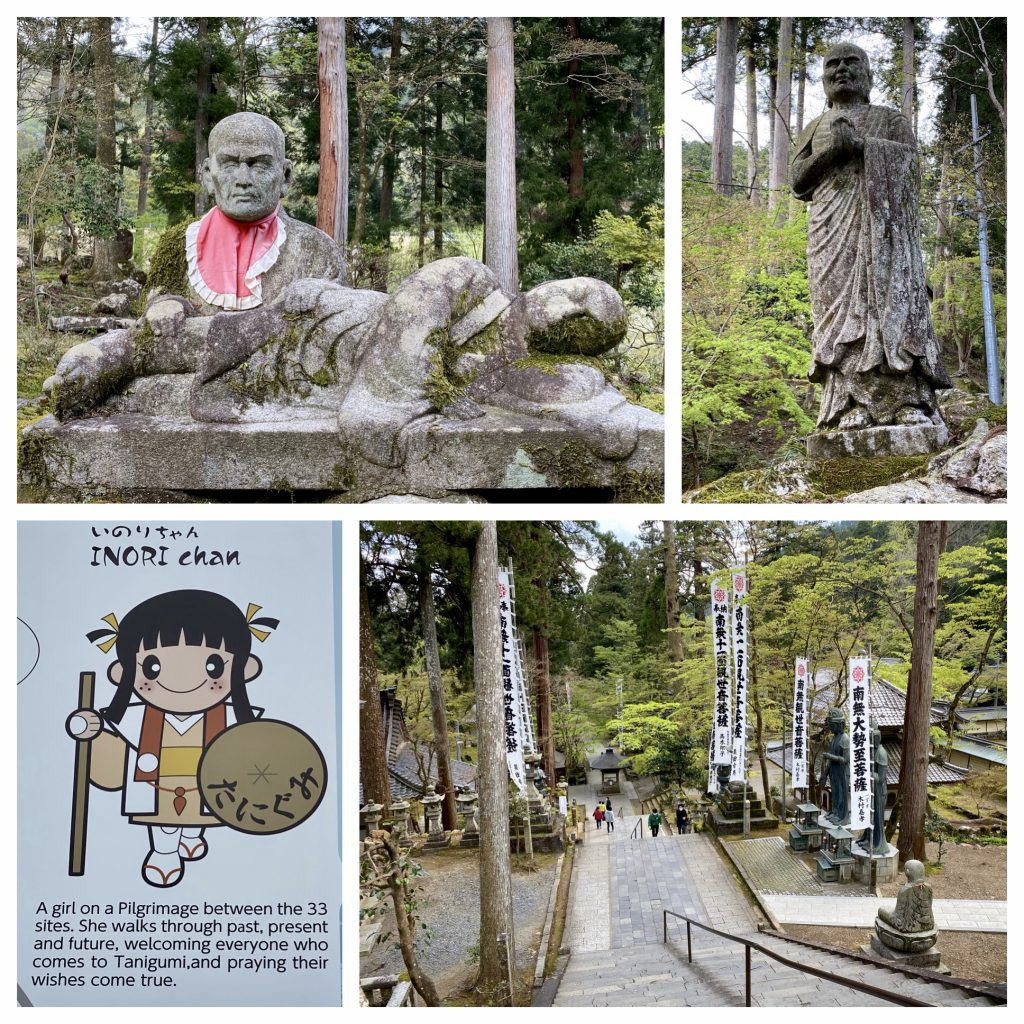 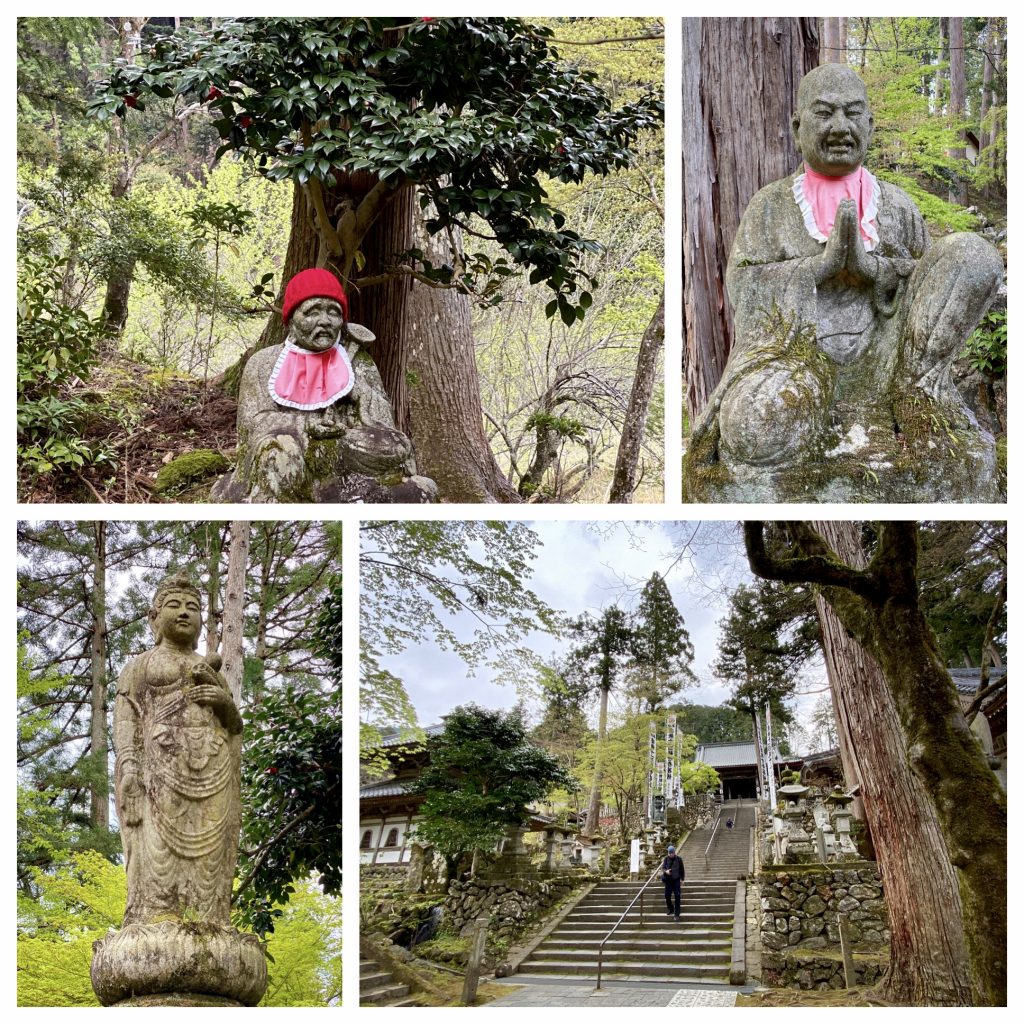 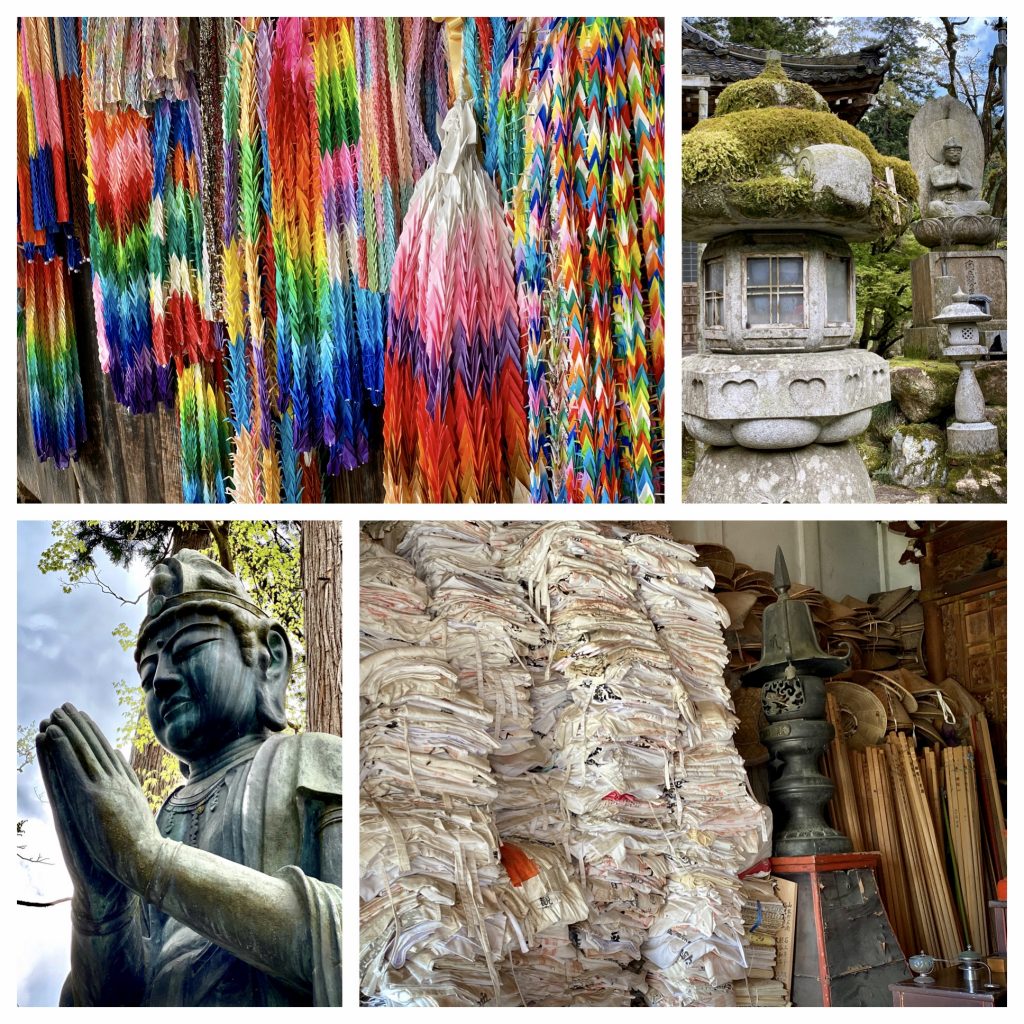 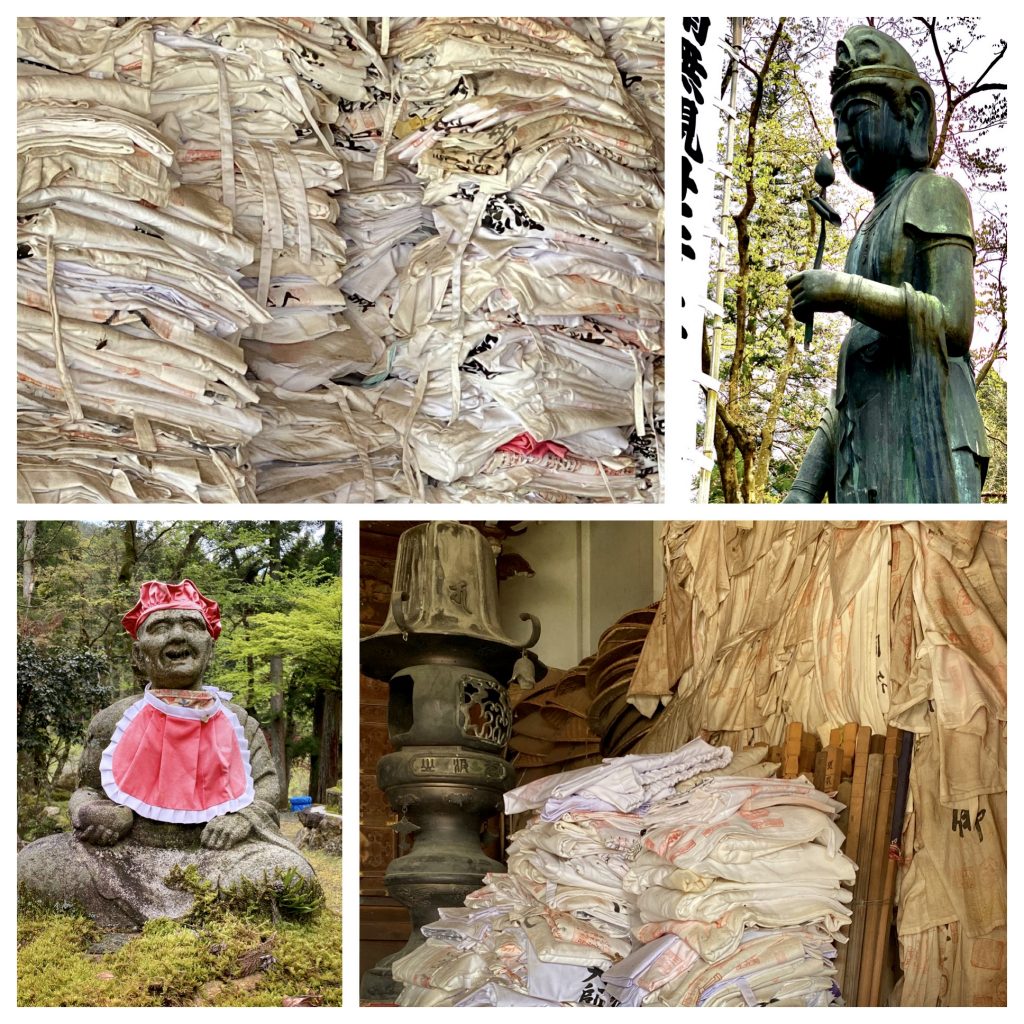 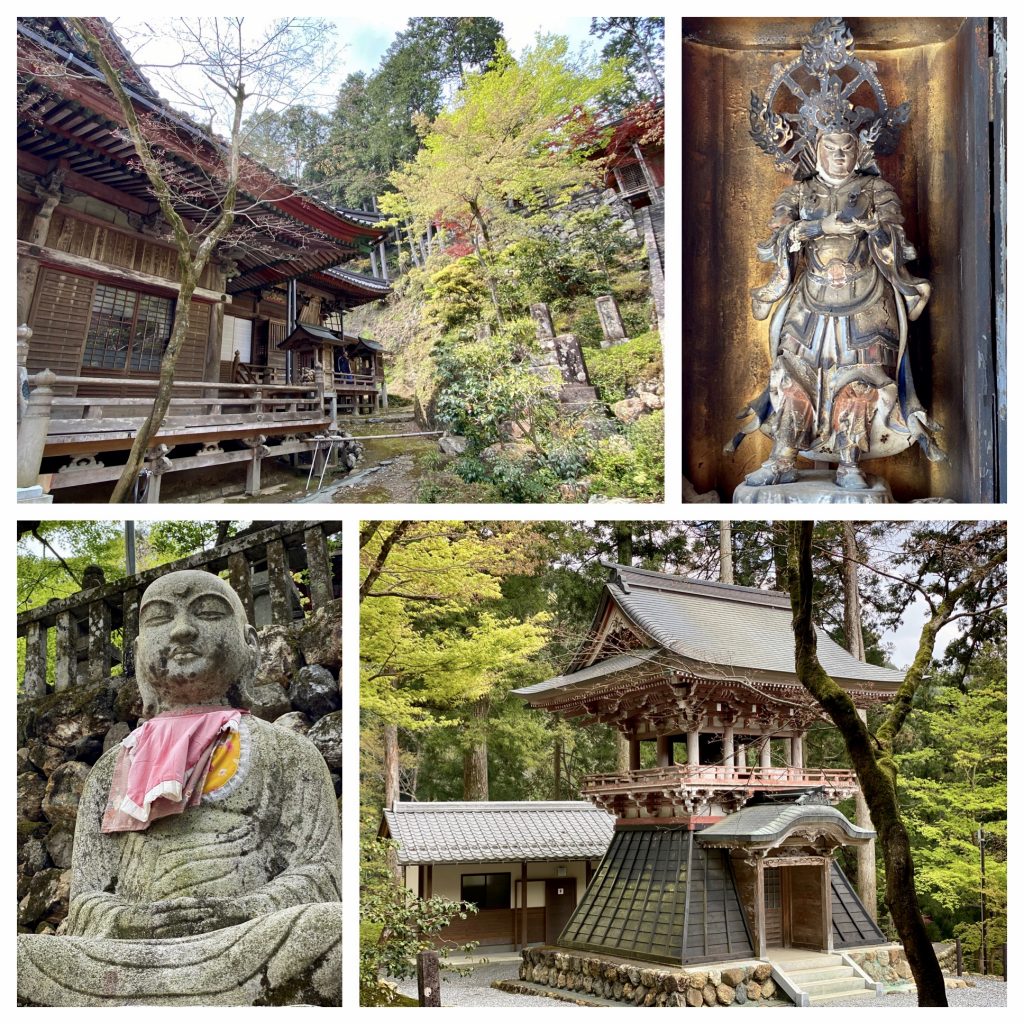 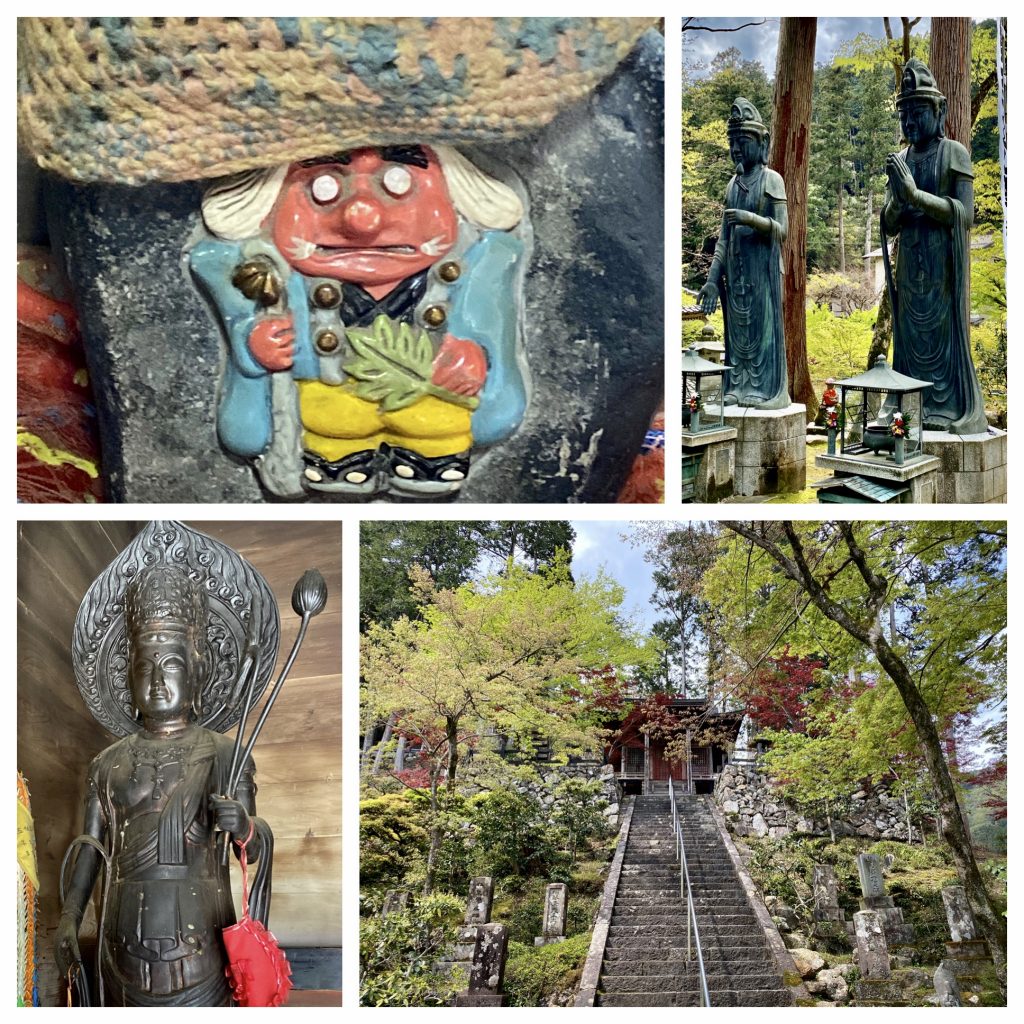 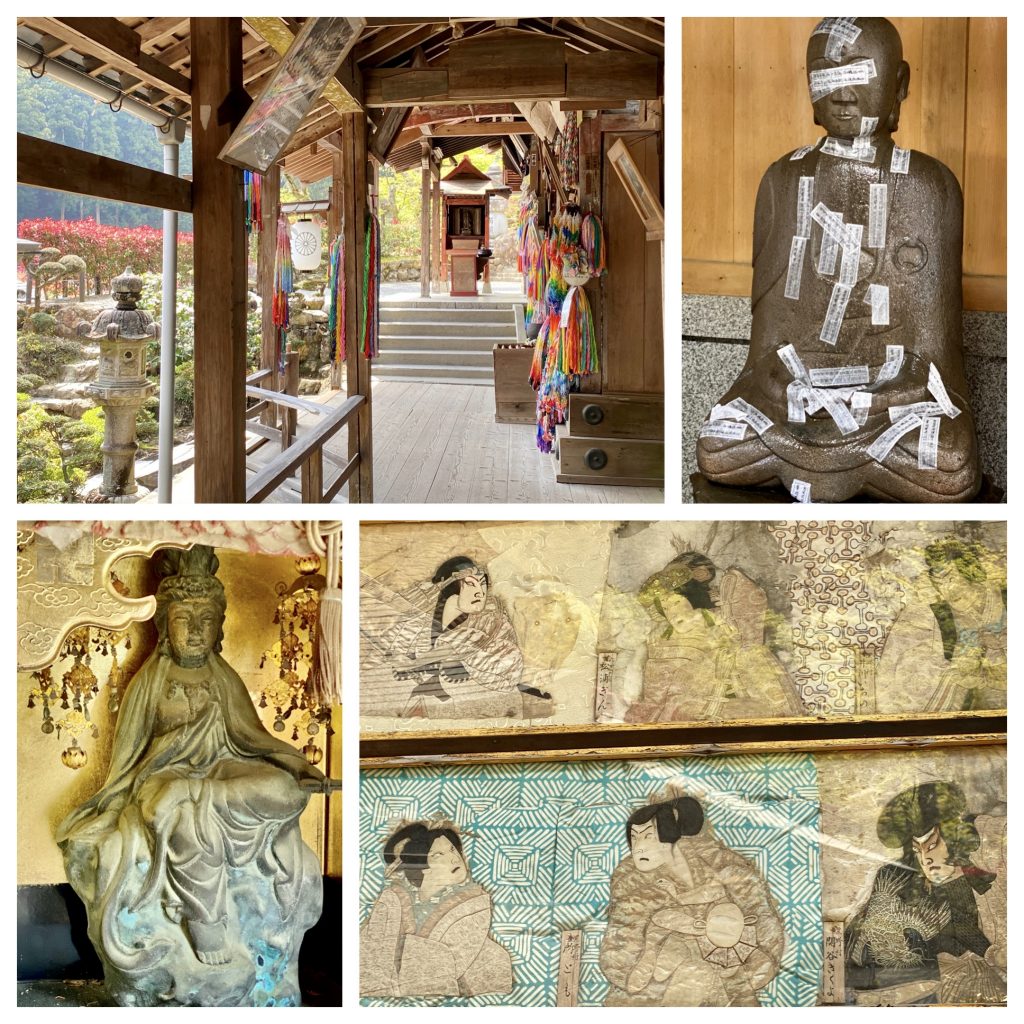 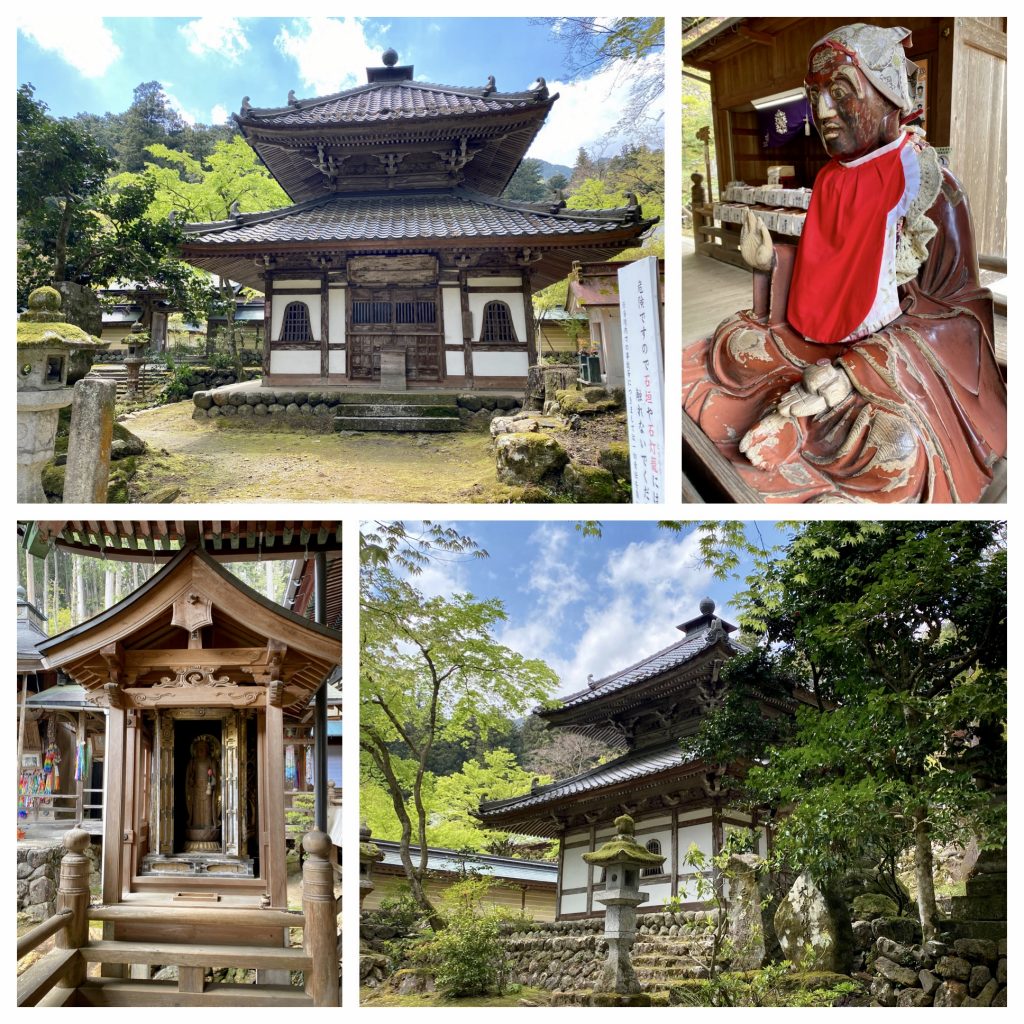 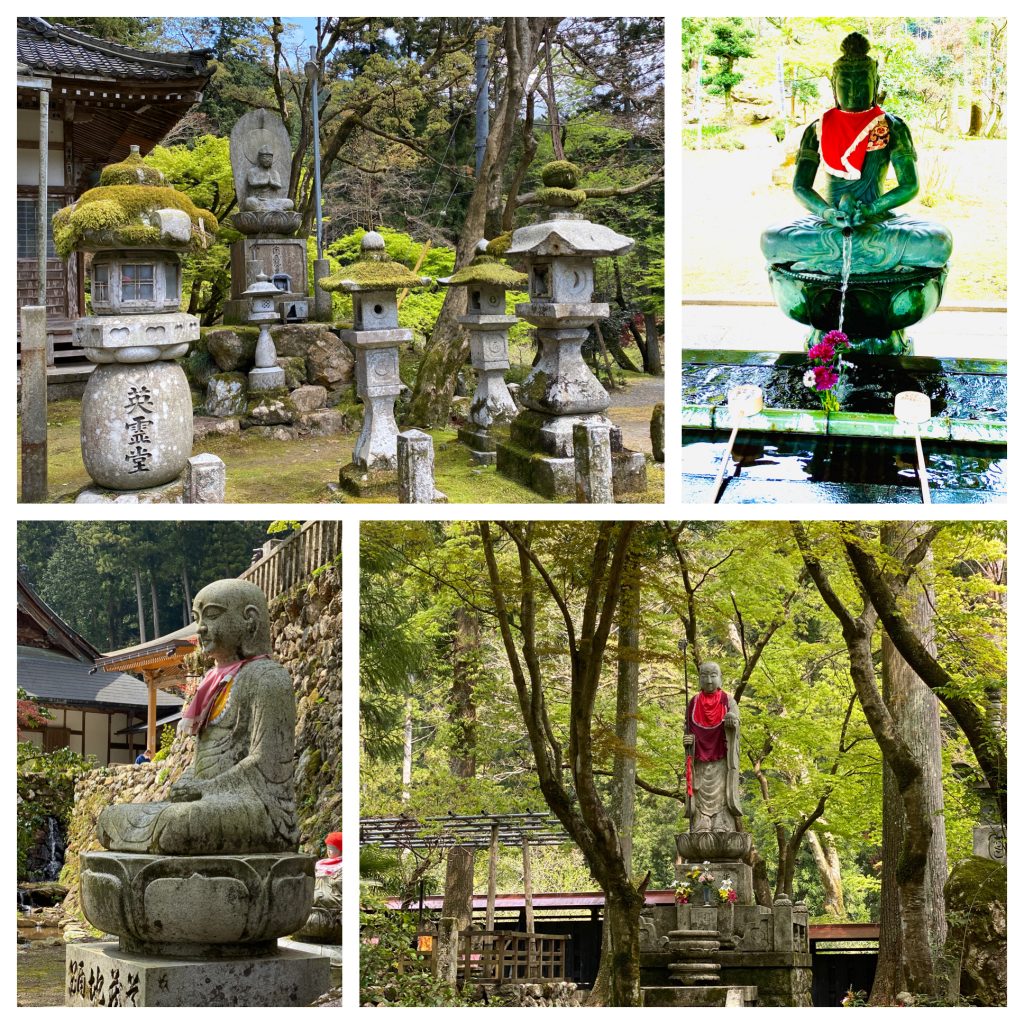 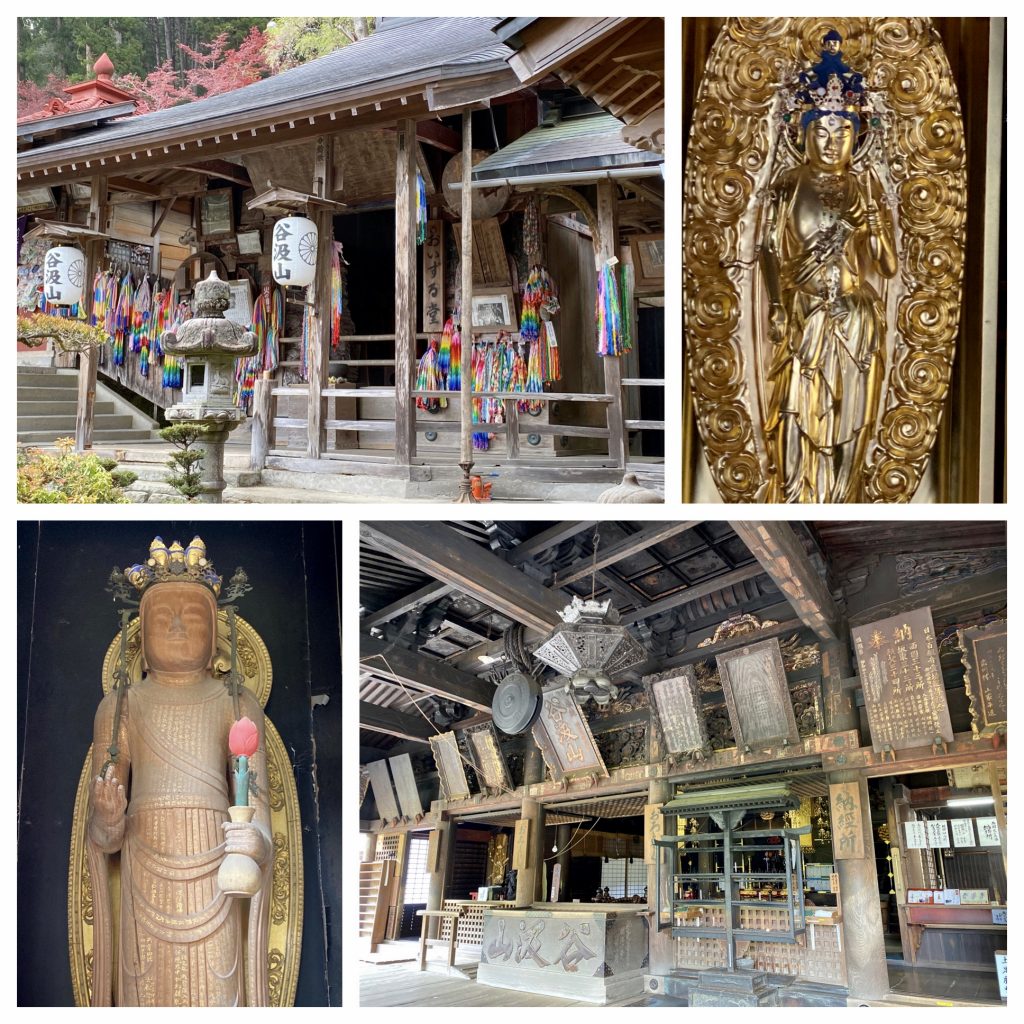 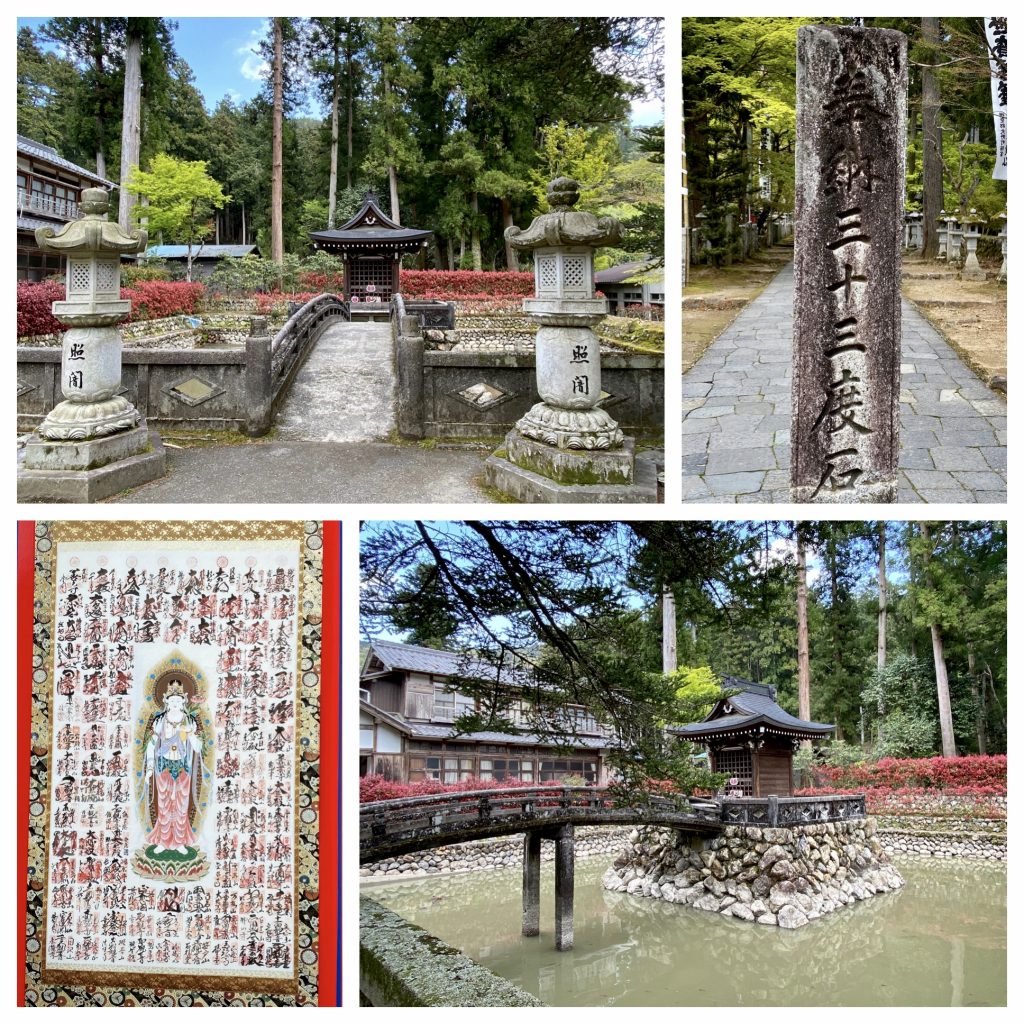 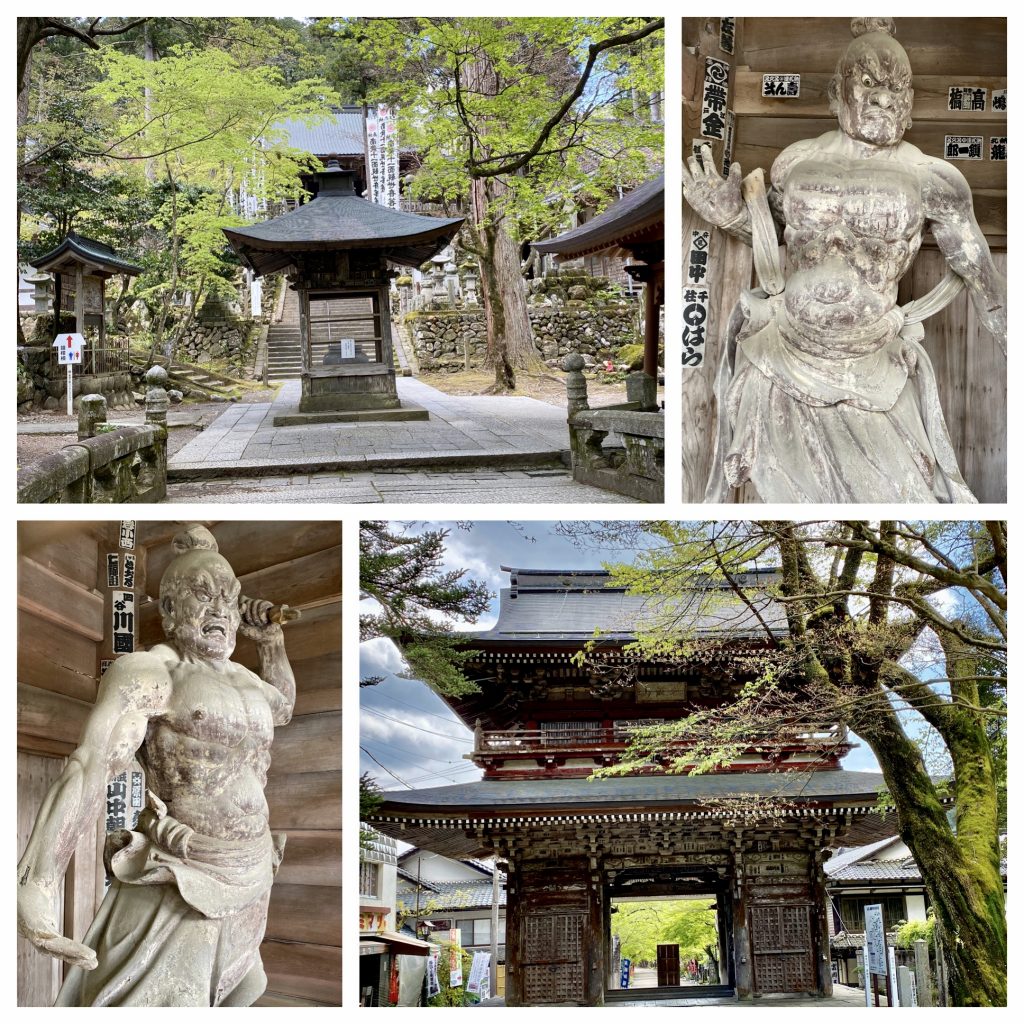 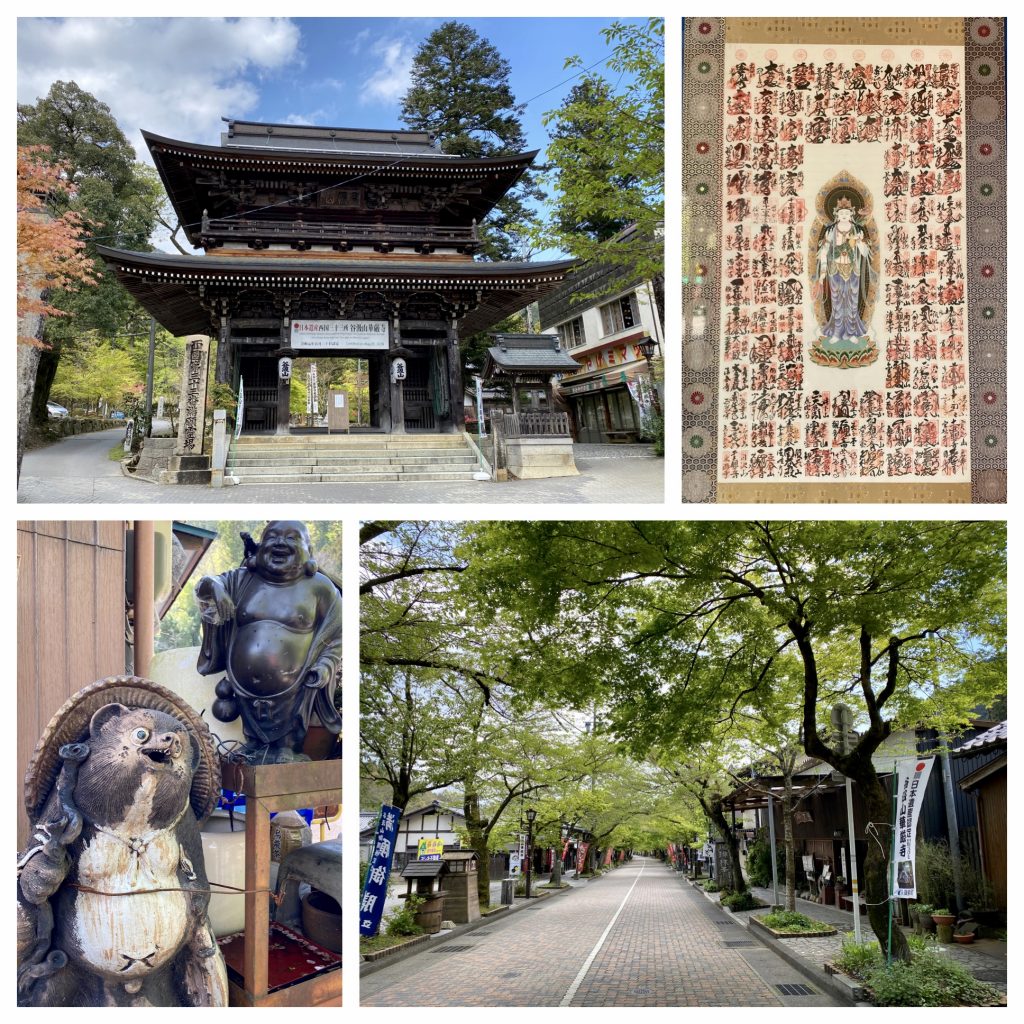 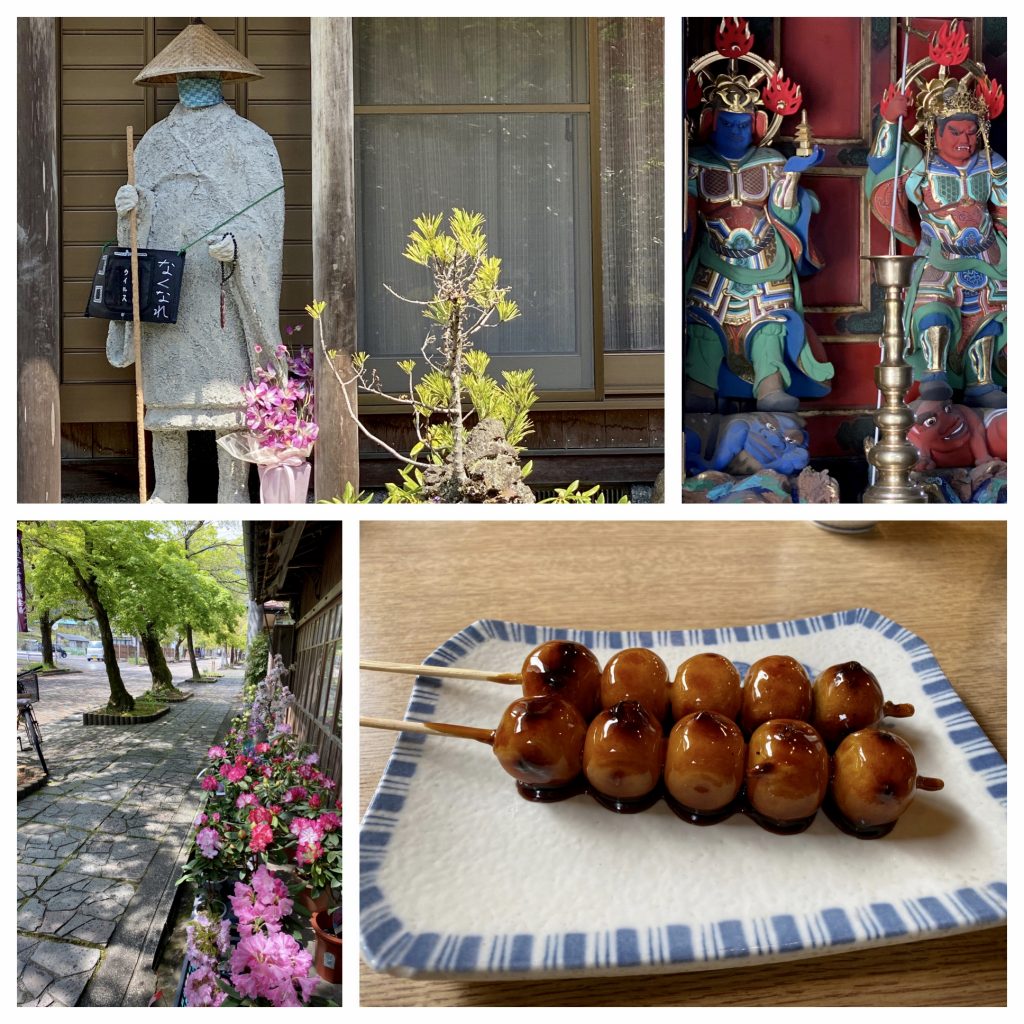 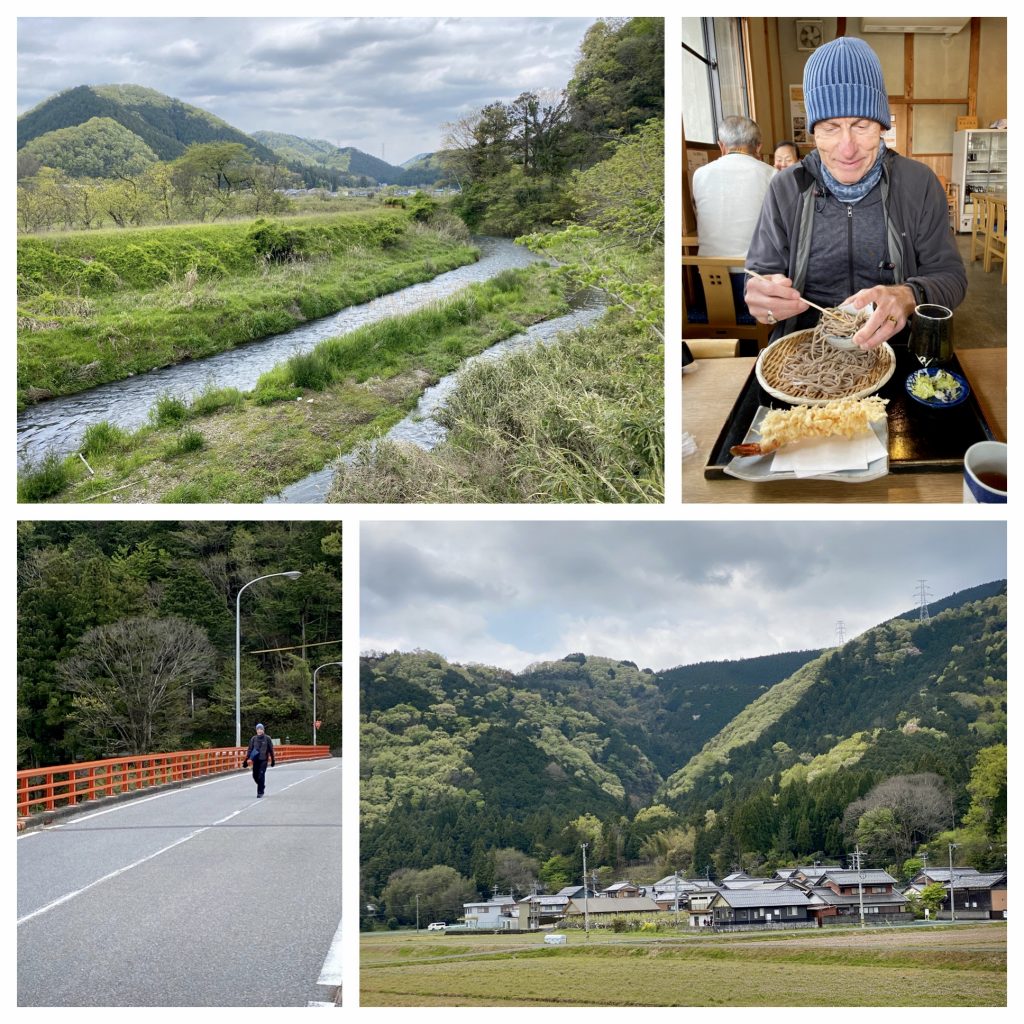 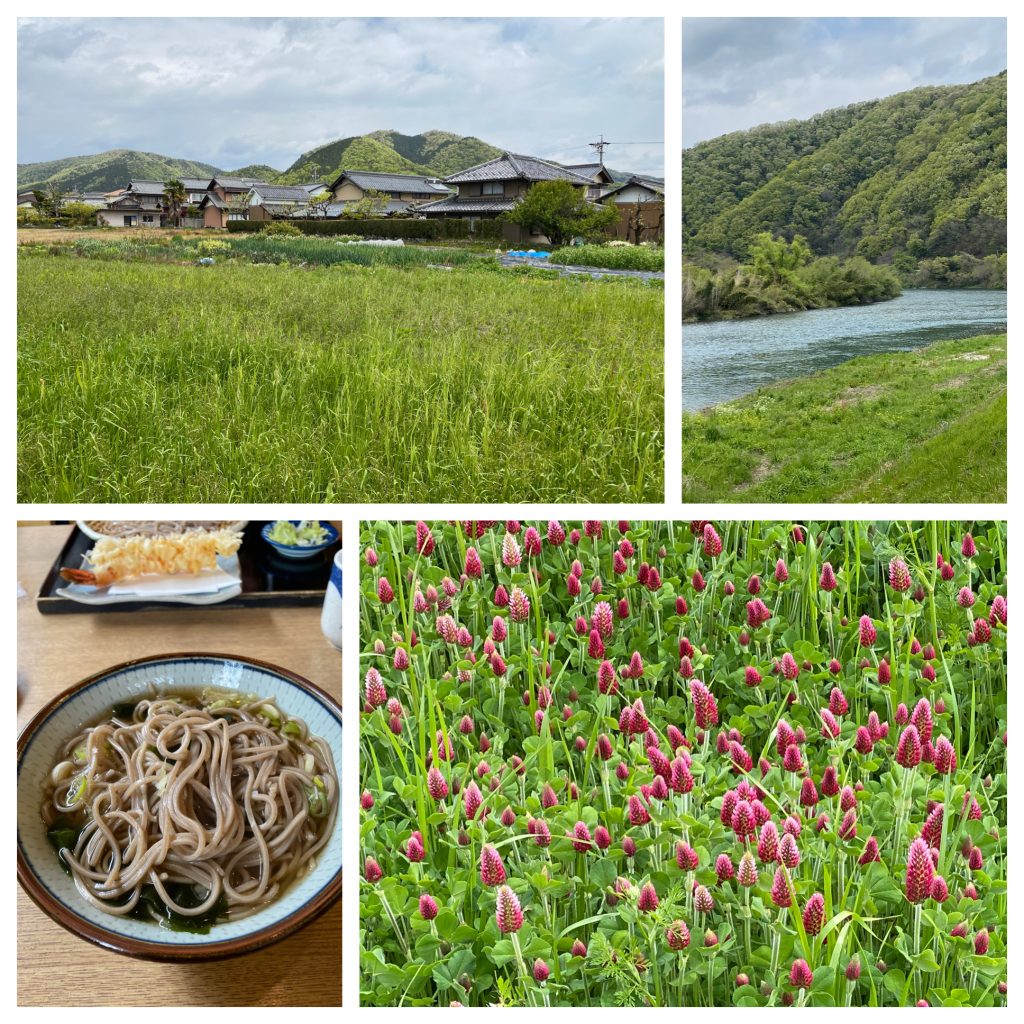 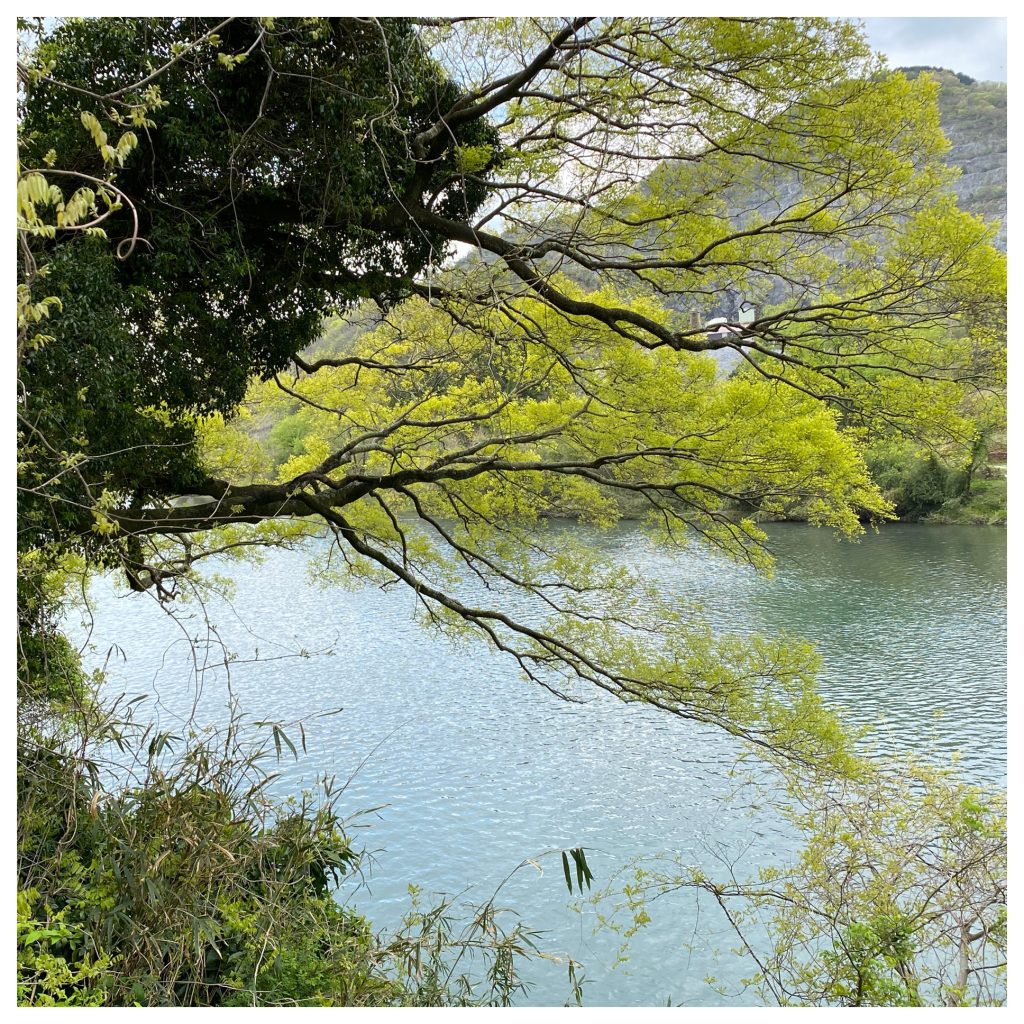 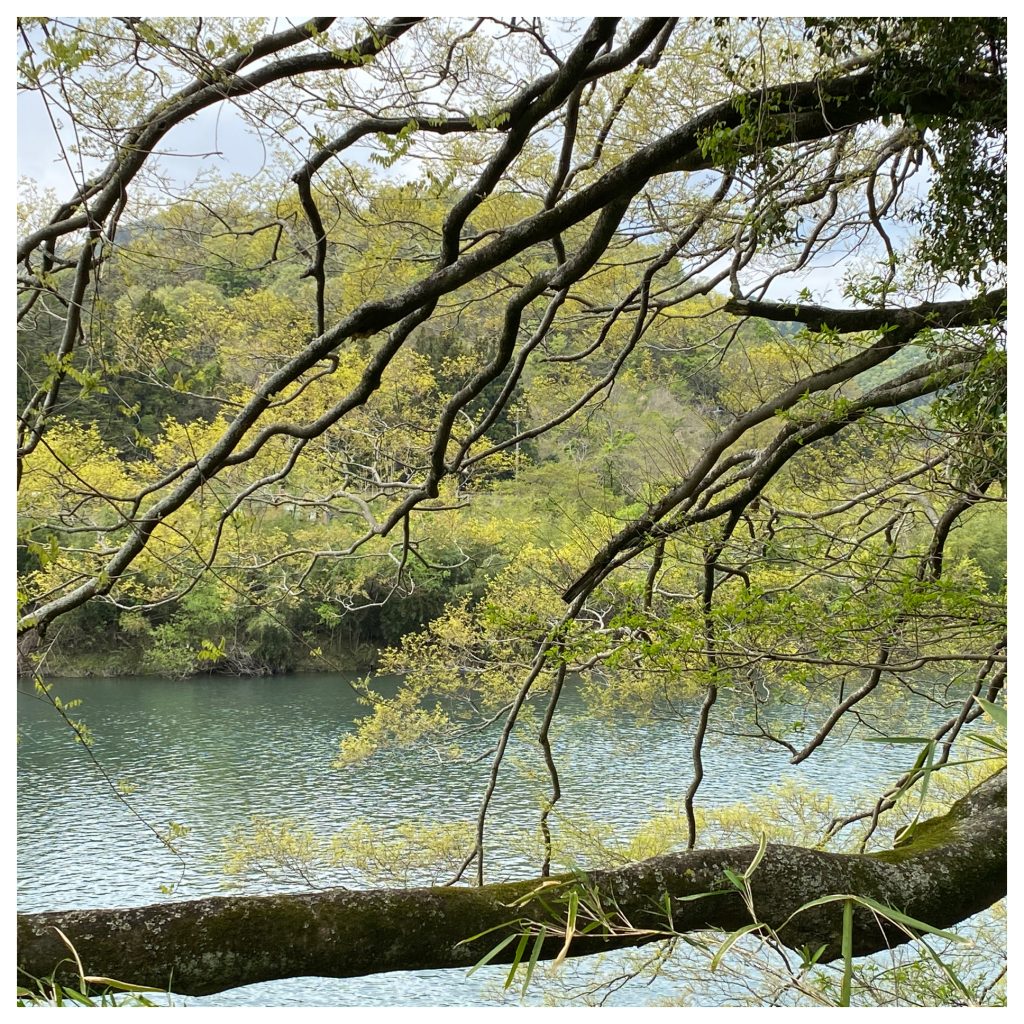 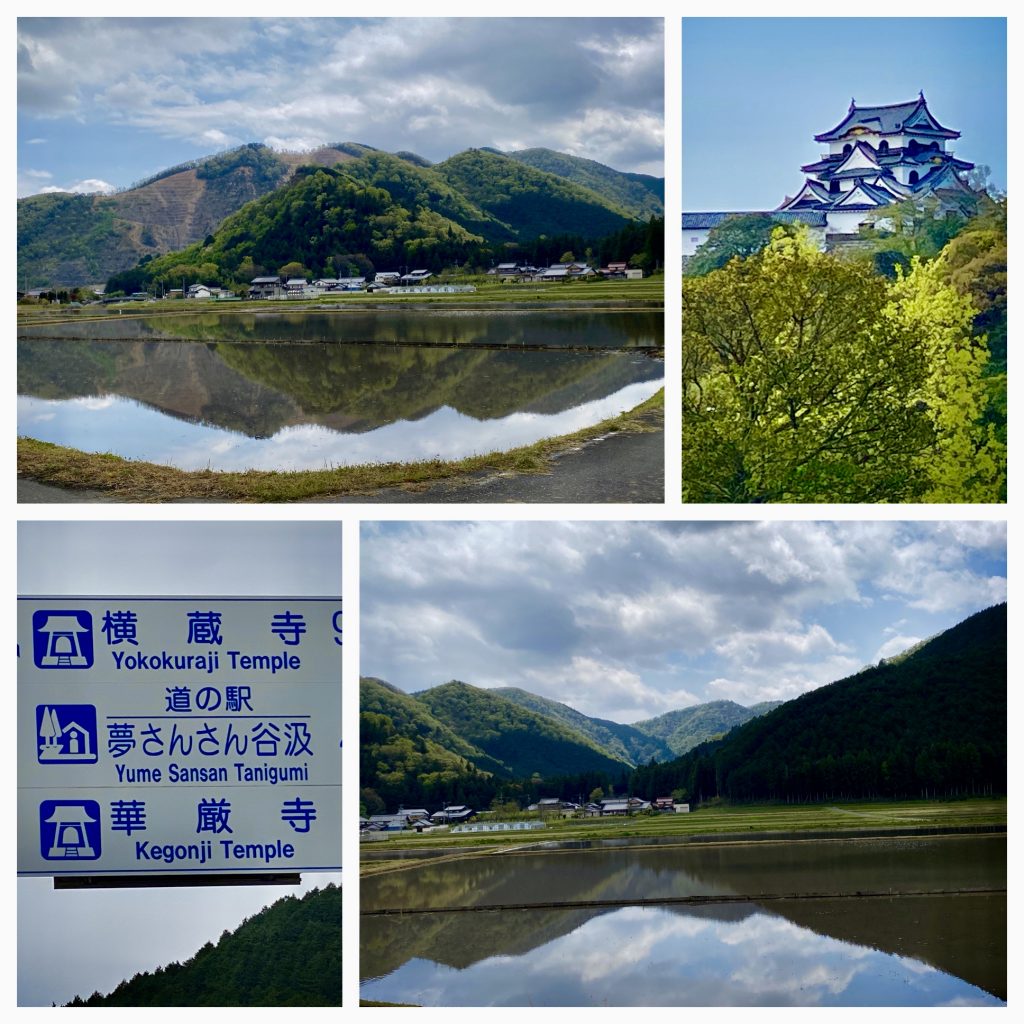 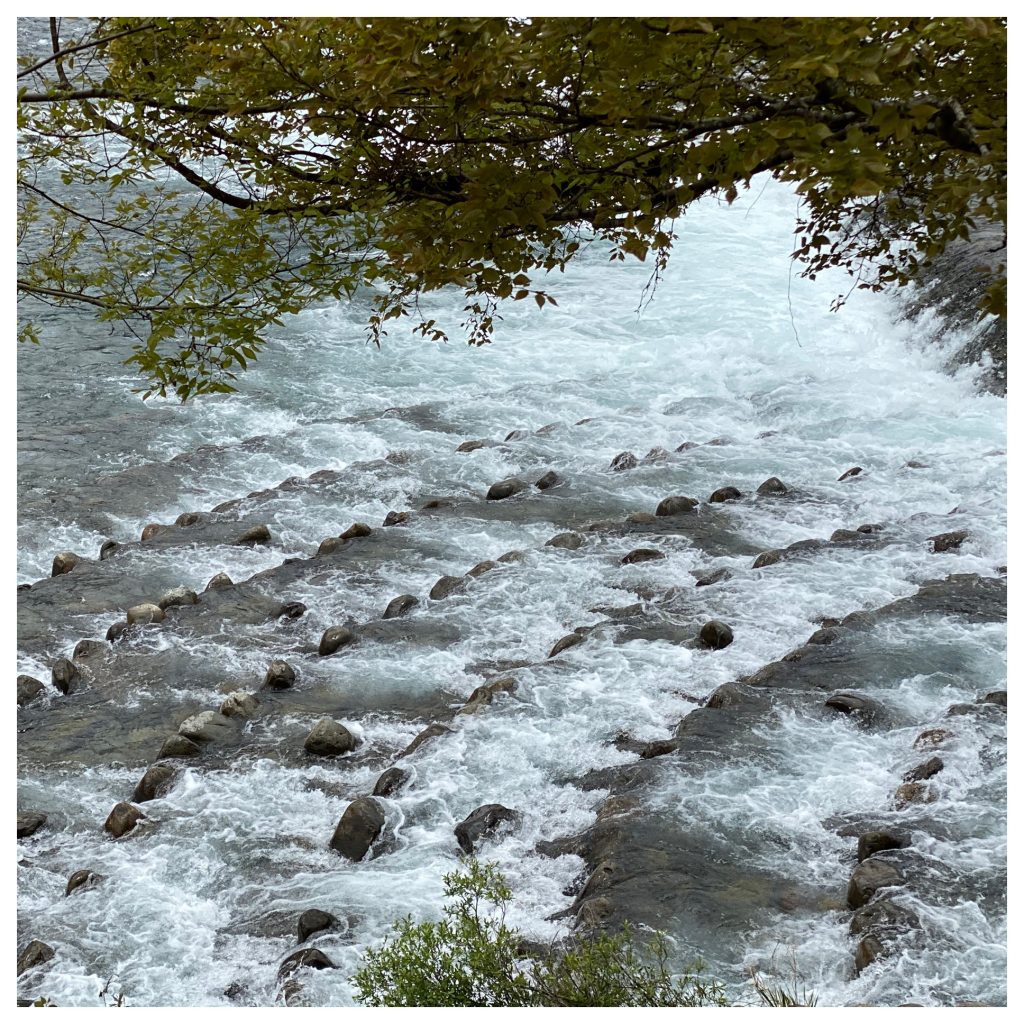 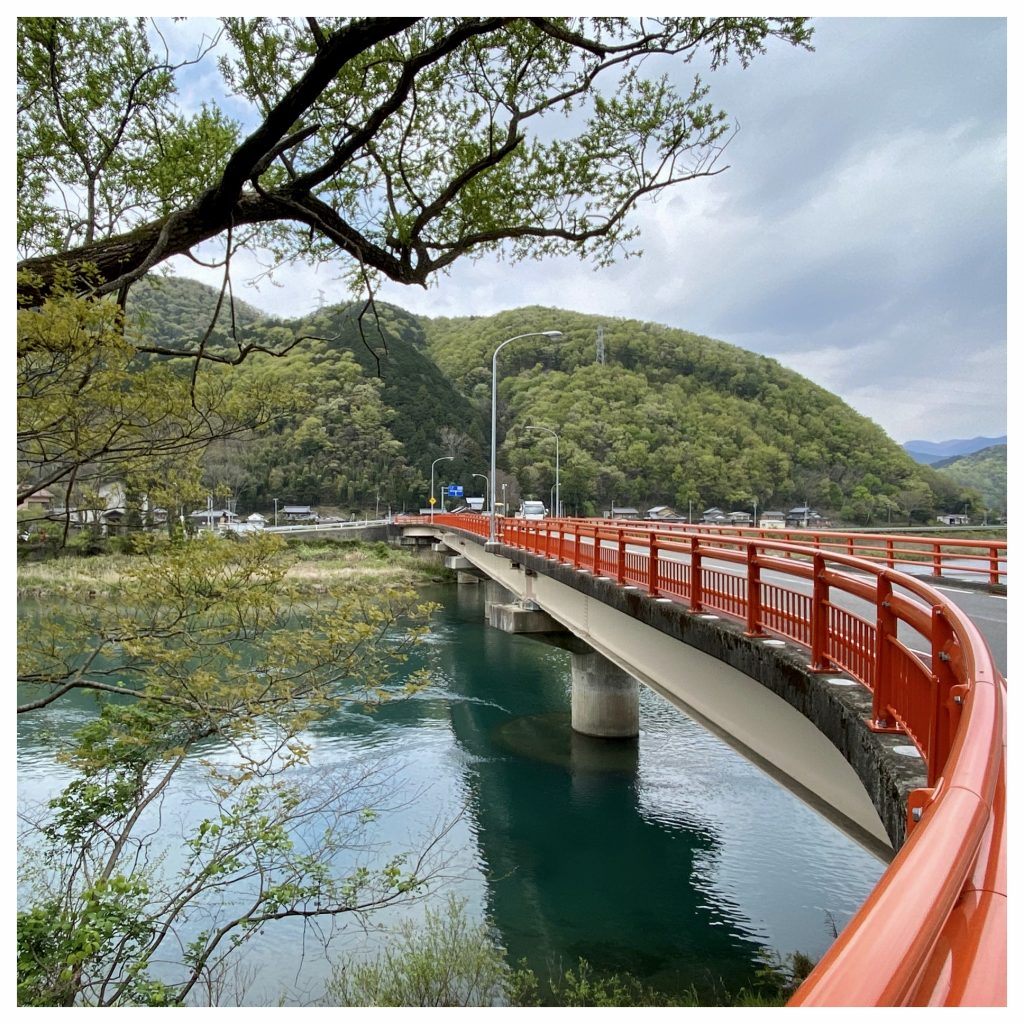 Because of the multiple cancellations we received for hotels in Gifu Prefecture, we decided to visit the only temple of the pilgrimage actually located in Gifu, Kegon-ji, Temple #33, today, and to go on to stay in an apartment in Kyoto for a few days.

We plan to cover the distance that we have missed, of walking from Hikone to Gifu, by continuing to walk in Kyoto and then to resume the pilgrimage route in a few days.

We had an early breakfast in our hotel, and started our walking day early.
Kegon-ji temple is situated on the lower slopes of Tanigumisan mountain in Gifu prefecture, and it is the 33rd and final temple on the Saigoku Kannon pilgrimage.

But we are not walking the pilgrimage in numerical order.
We have about ten more temples to visit during our walk.

To reach Kegon-ji temple, we walked through small villages located by a river with lots of rice fields and a huge cement factory looming in the background.
Still, the river looked clean and the villages were picturesque.

Along the way, we stopped at a small roadside restaurant that was serving Udon and Soba noodles, to have lunch.
They had a steady stream of customers, and they served us a very delicious grilled Dango.
Dango is a dumpling ball made from mochi rice.
It was cooked and grilled and served with a sweet soy sauce.

I was happy that we had stopped for lunch at this roadside restaurant.
Initially I thought to have Dango and a soba lunch in Tanigumi, the touristic village at the foothills of Kegon-ji temple.
I knew that the village has lots of shops selling pilgrim’s memorabilia, food, traditional restaurants and two onsen guesthouses.

I also knew that the guesthouses were closed because of the coronavirus, because I had tried to book one of them after we got our first hotel cancellations in Gifu.

Tanigumi is usually a welcoming village, with friendly people and very picturesque streets.
The town retains its small village charm and is well known as being the site of Kegon-ji, the last temple on the 33 temple Saigoku Pilgrimage (Saigoku Sanjusansho Junrei), encompassing about 1500km.
The pilgrimage stretches from Gifu to Lake Biwa to Kobe, and touches both the East and the West coasts of Japan.

On our approach to the temple, I saw a big shop selling scrolls of the pilgrimage, as well as Buddhist amulets, beads and memorabilia.
The shutters were all closed, but two men were outside the shop, and they rolled up one shutter and invited us to go in and have a look.

I explained that we were walking the Saigoku Pilgrimage, but that some of our temples were currently closed, and we might not be able to complete our scroll.
We wanted to buy a completed scroll, with all the calligraphy and seals, as a memory of our epic journey during these coronavirus times.

They mostly sell new empty scrolls, so pilgrims can collect their own temple stamps and gain the merits of going on a long pilgrimage.
But he pulled up an old scroll, completed with all the seals and stamps.
It was a beautiful old scroll and he asked ¥80,000 for it (roughly $800).

I felt it was too much to spend.
We would probably come back to Japan in the future, and would be able to visit the temples that were now closed in the future.

The man saw my hesitation and offered to sell it to us for ¥50,000.
I told him the truth, that we could buy one on line at Rakuten for ¥26,000 ($250).
He knew that this was his one and only chance to make a sale today, and perhaps this whole month, and even into the unforeseeable future, and agreed to my price.
He packed the scroll for us in a plastic tube and gave us a carry bag for it, to protect it from the rain.

For some bizarre reason, I felt a sense of relief to know that we now have a complete scroll with us.
It makes NO sense at all to be this childish about black ink and red stamps, and I have to admit to myself that I still have a long way to go on my path to non-attachment….

When we entered Kegon-ji, both Jules and I had a strong sense that we had been here before.
We tried to remember if we came here as tourists on previous trips to Japan, but could not recall.
Still, we could not shake the feeling of being here before.

Kegon-ji Temple was built in 798 and was given its official name, Tanigumi-san Kegon-ji, by Emperor Daigo after its construction.

There are a few buildings on the temple grounds, including a hall in which pilgrims have attached prayer slips and prayer boards to its walls, that is full of pilgrims’ jackets, walking poles and hats.

At Kegon-ji, you can venture down a dark staircase under the main hall for 200 yen, and grope around a narrow, pitch-black corridor in search of a smooth rock.
If you find the rock, it is said that you have touched the Buddha’s heart and will attain enlightenment.

Near Kegon-ji temple is Yokokura-dera, a temple that holds the mummified remains of an old monk, who had slowly poisoned himself over 10 years so that his body would be easily mummified.

Unfortunately, we had no time left in the day to walk the extra seven kilometers each way to visit Yokokura-dera.
The weather, which had held up well all day, turned very grey, and a heavy rain and cold wind accompanied us on our way back to the train station.

We were soaking wet by the time we reached the train station, only to find that we had missed the train by just a few minutes, and had to wait another hour an a half.
I called a taxi instead and we made it to another station, ten kilometers away, that had more frequent train service.

From there we took a series of three trains to Hikone and returned to our hotel, just moments before seven in the evening, when we had scheduled our dinner time.
We got out of our wet shoes and enjoyed a good dinner of eleven Kaiseki dishes.

After dinner we soaked in the empty hot springs.
It was very dark outside, and I could not see the lake nor the stars.
But the warmth of the hot springs warmed me from inside.

God created only paradise.
Yet we, her sleeping children, walk the world of dreams in seeming solitude, believing in darkness, unaware of our True Nature and of our inherent godly powers.
We mis-create out of fear, instead of celebrating our divinity and invulnerability as divine spiritual beings, ever whole, ever healed and eternal beings.
With love and light,
Tali and Jules