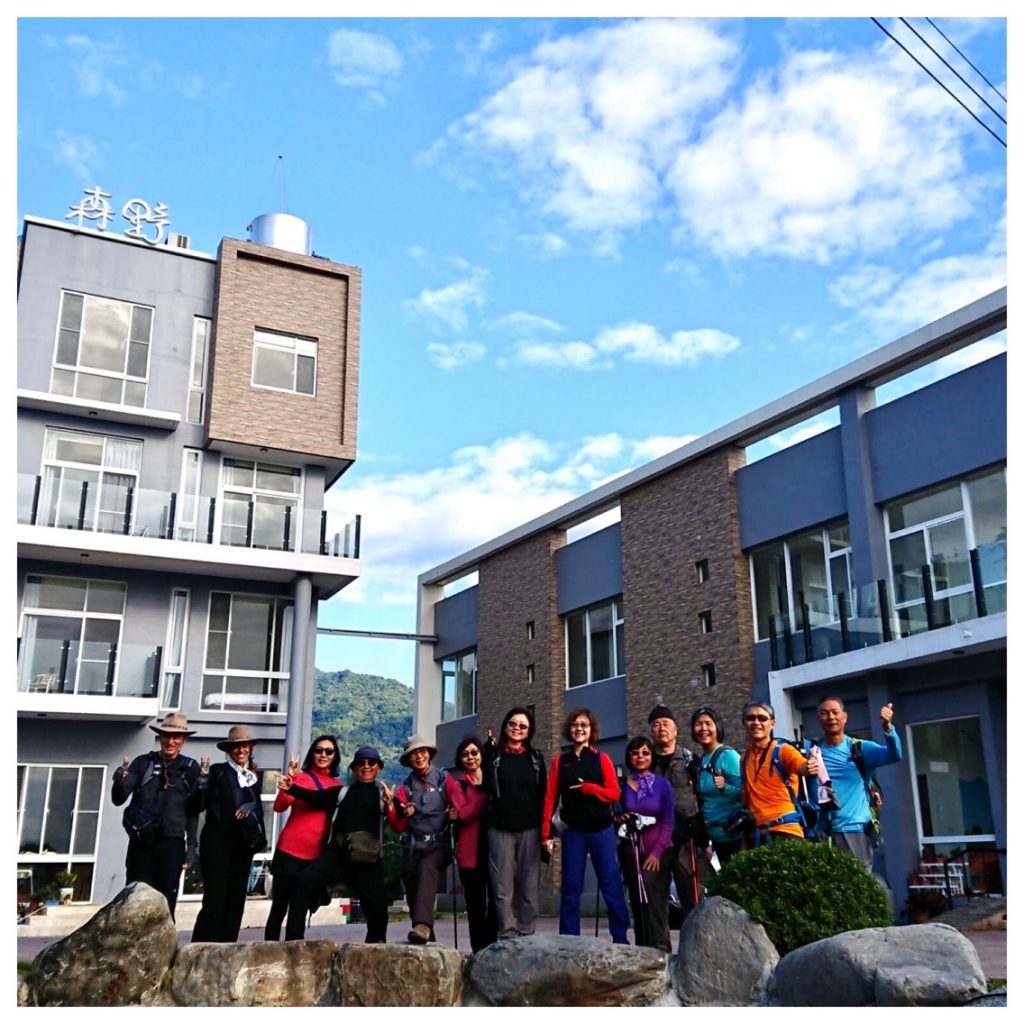 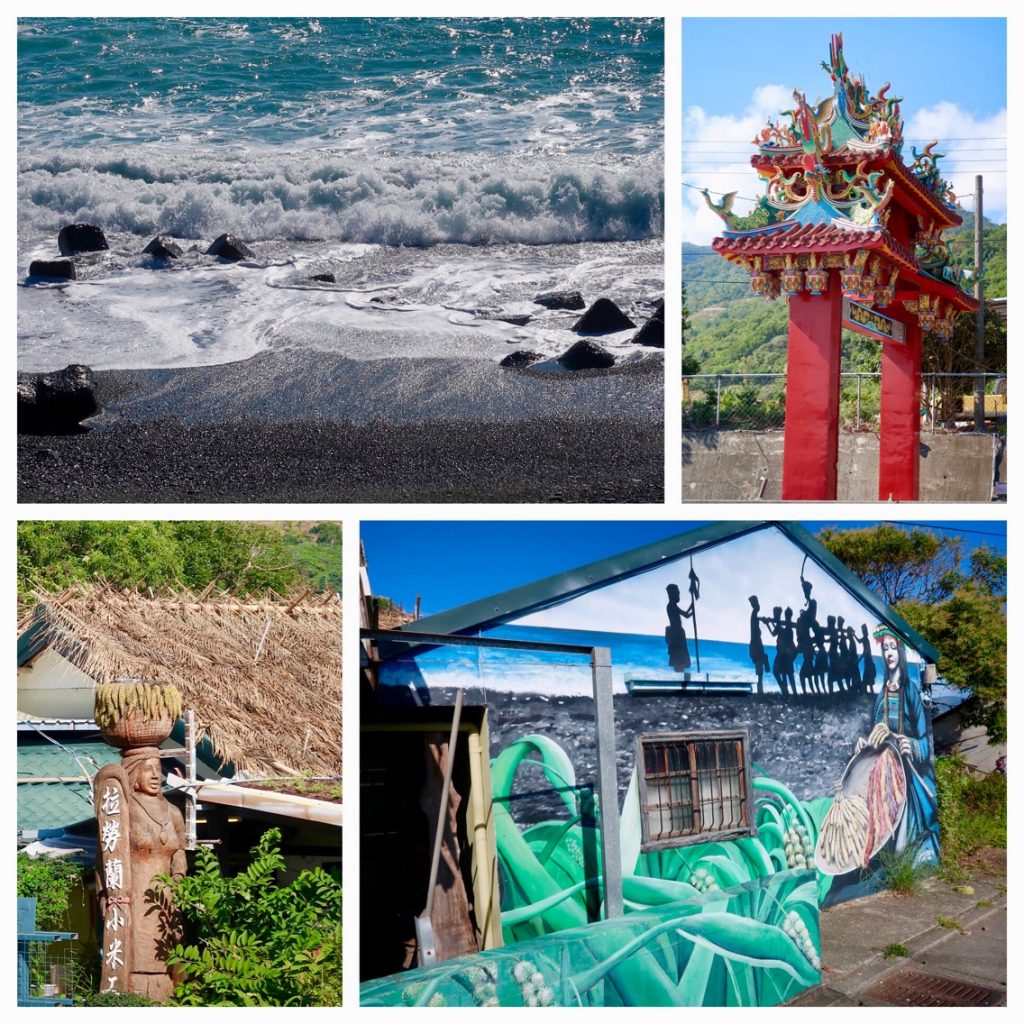 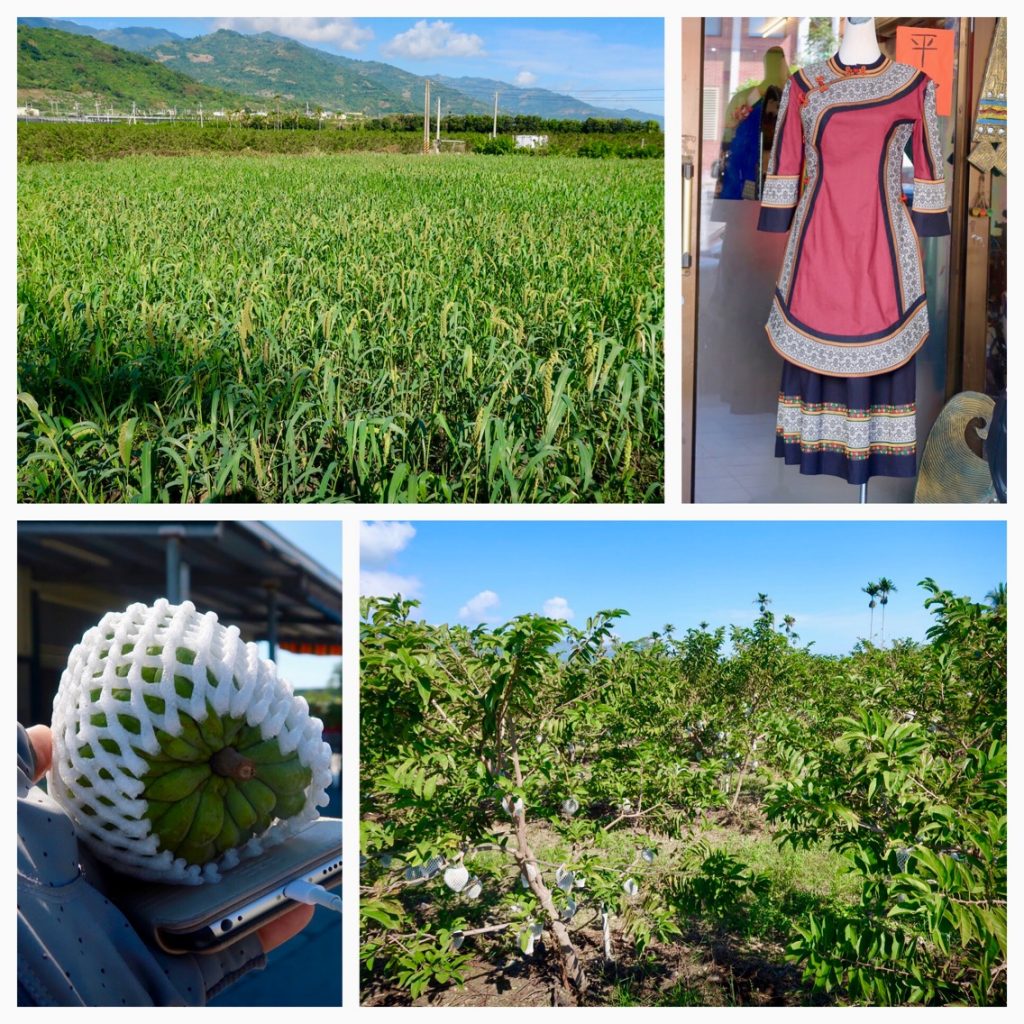 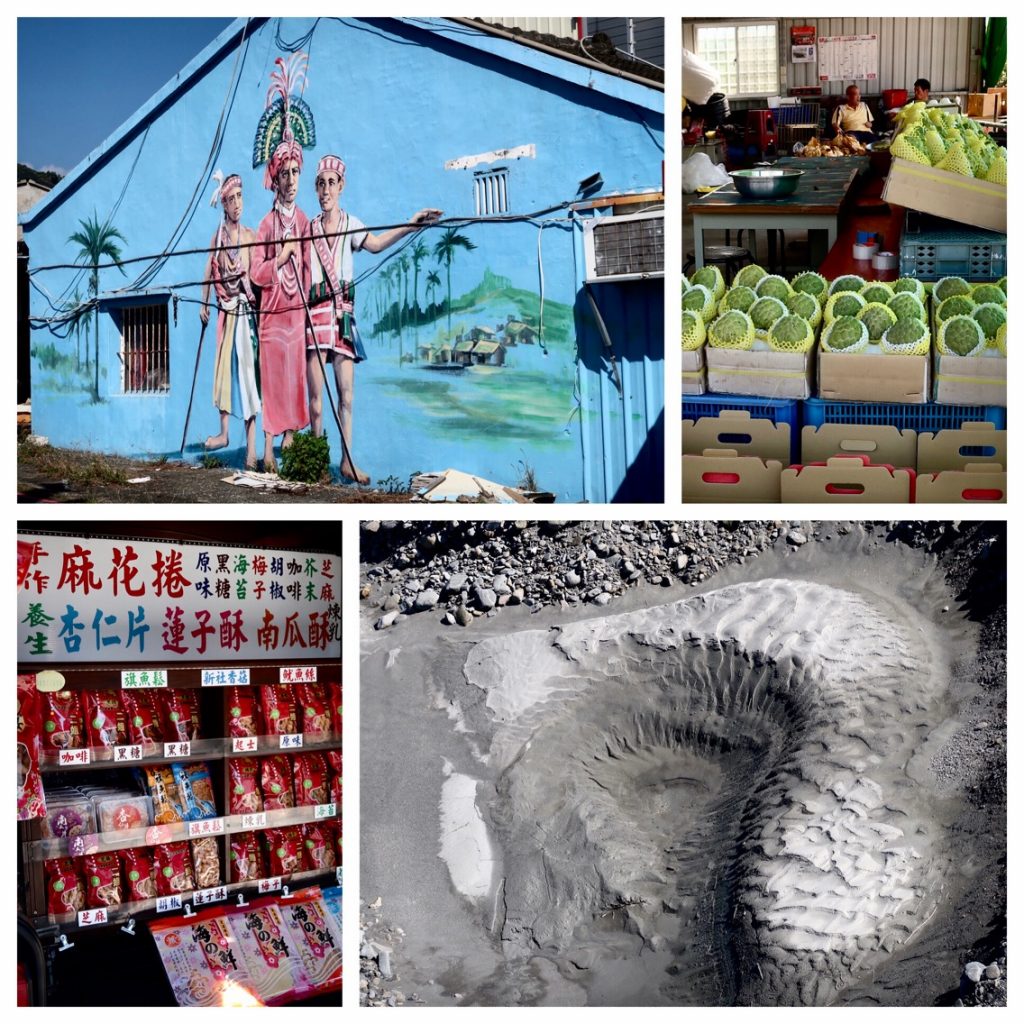 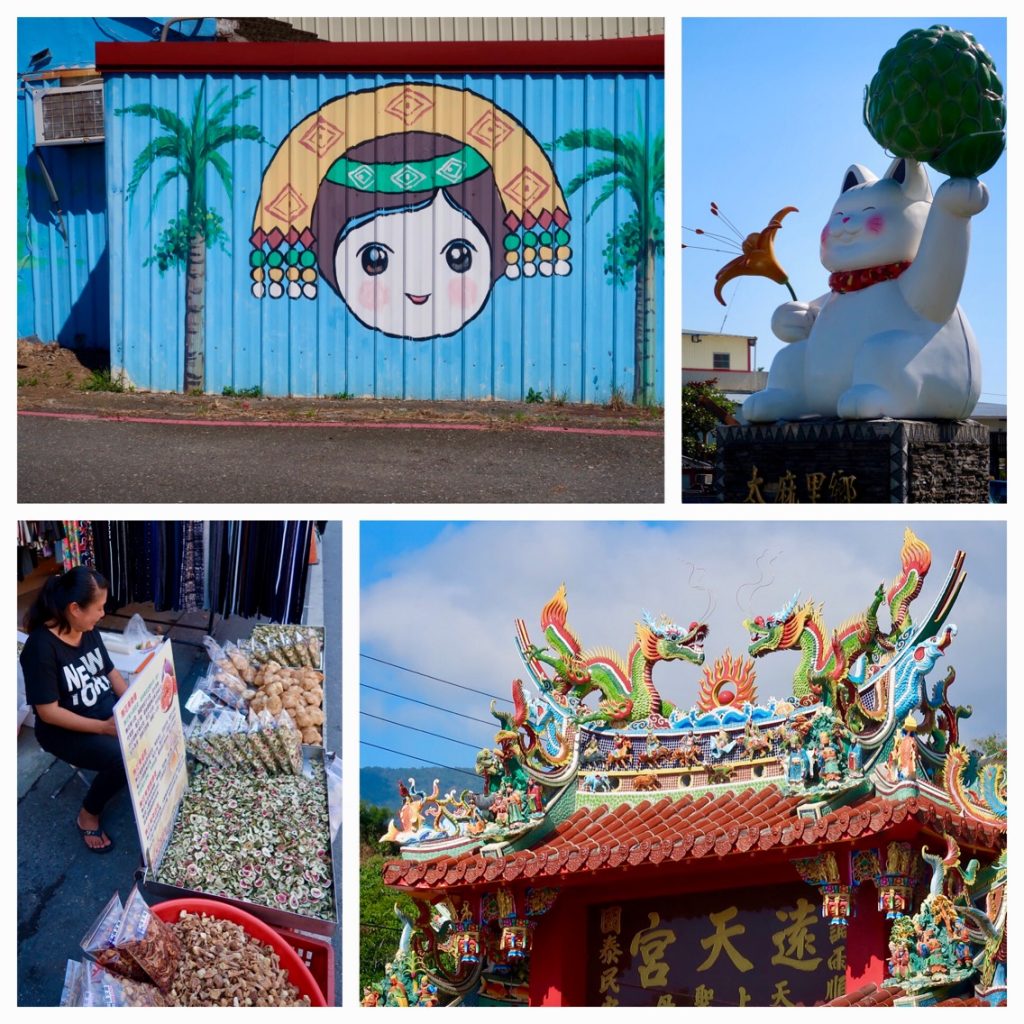 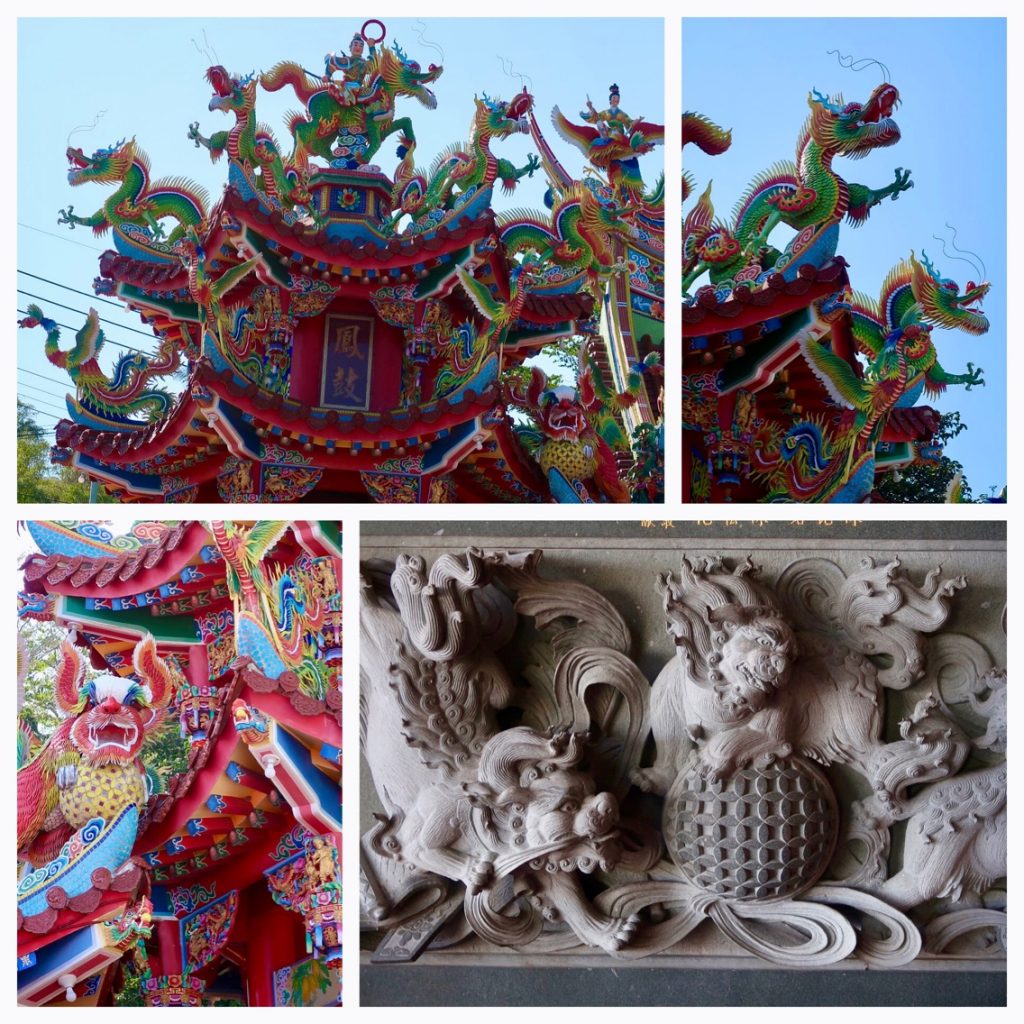 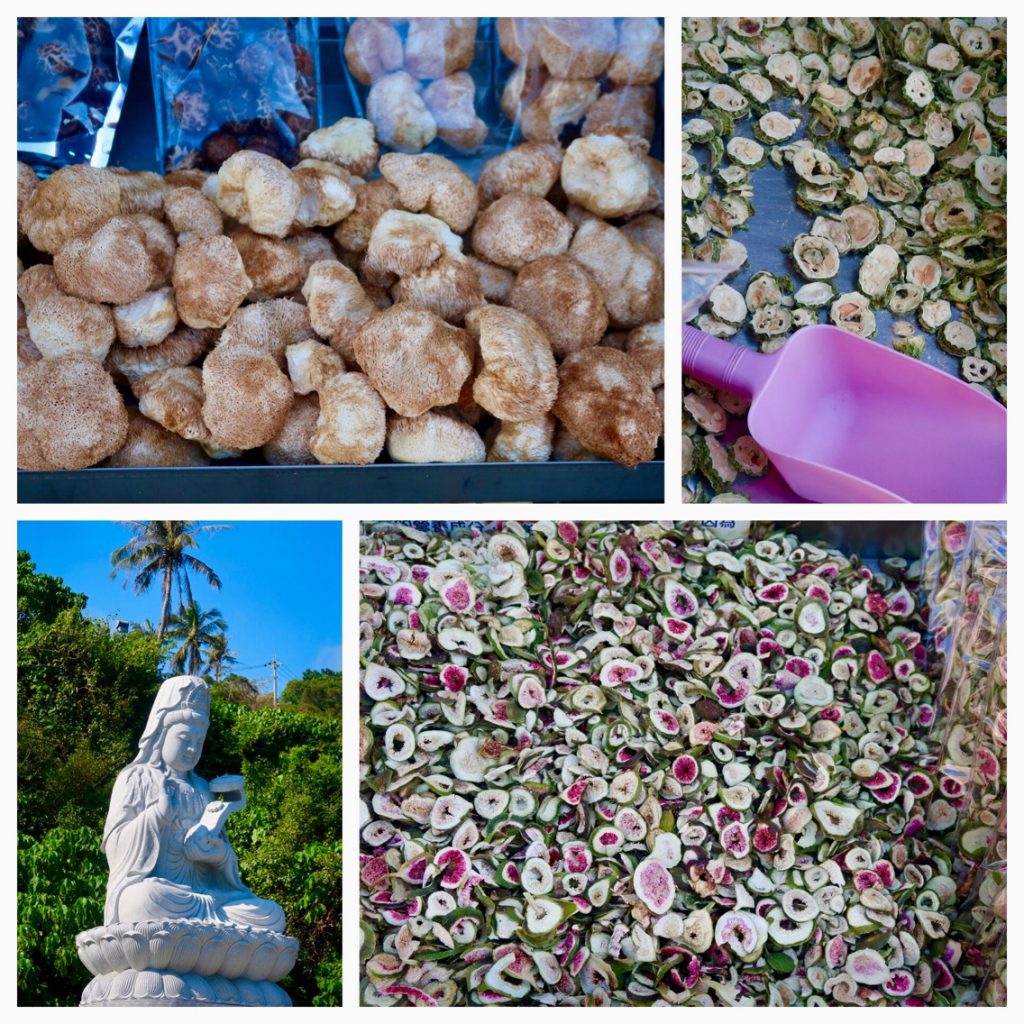 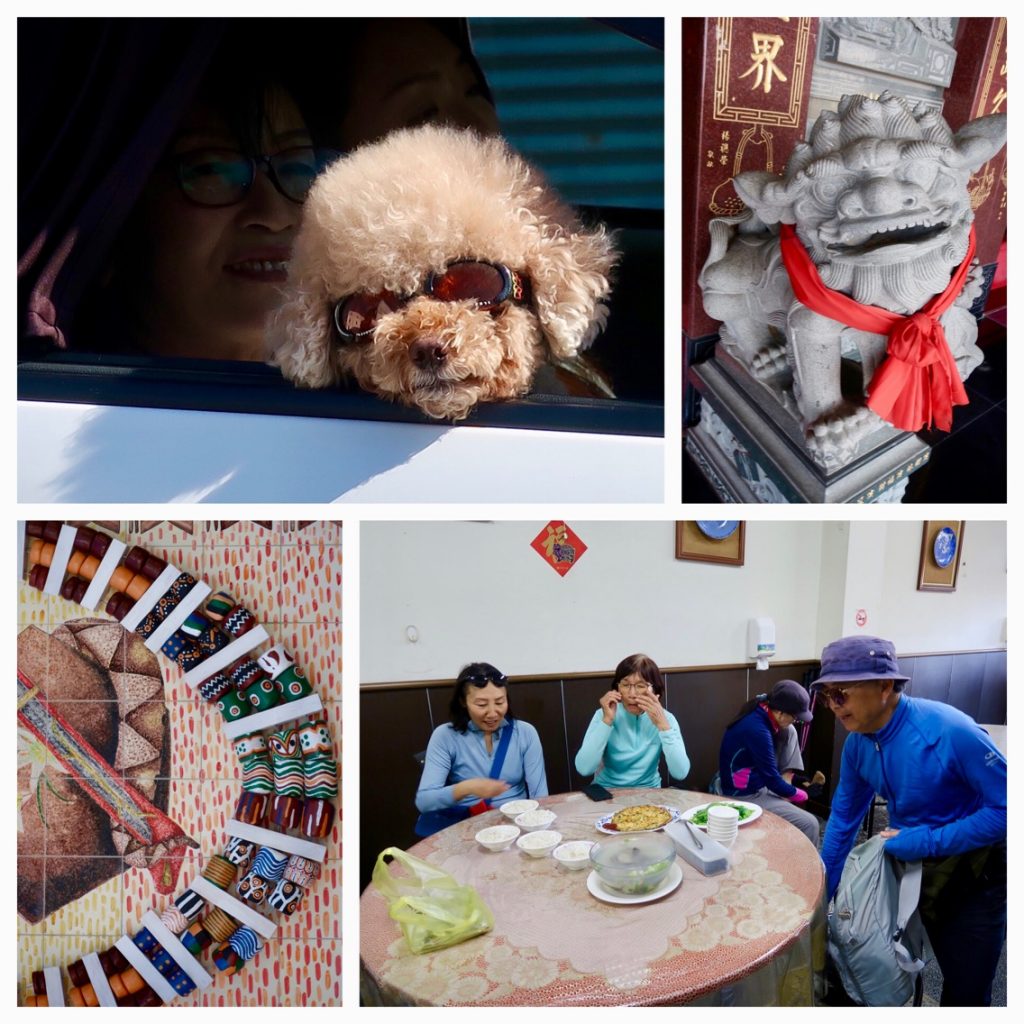 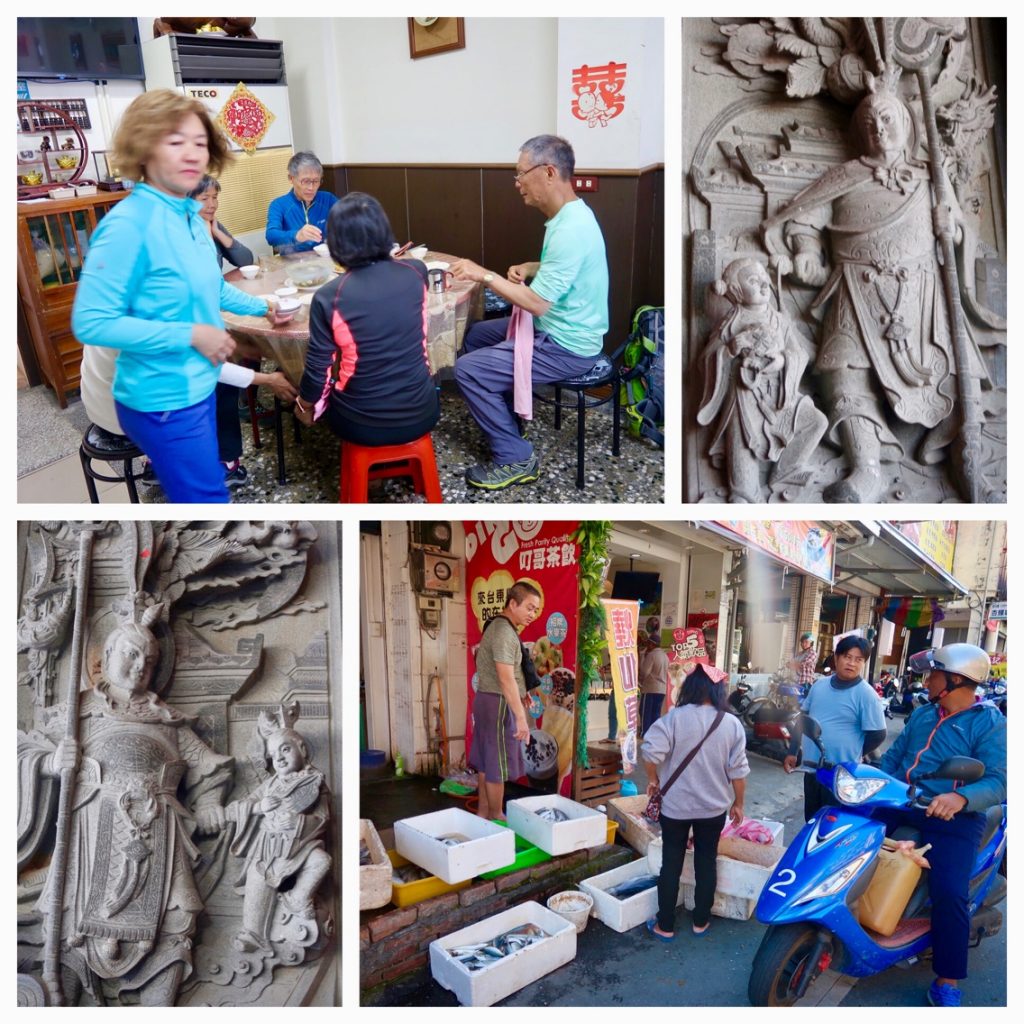 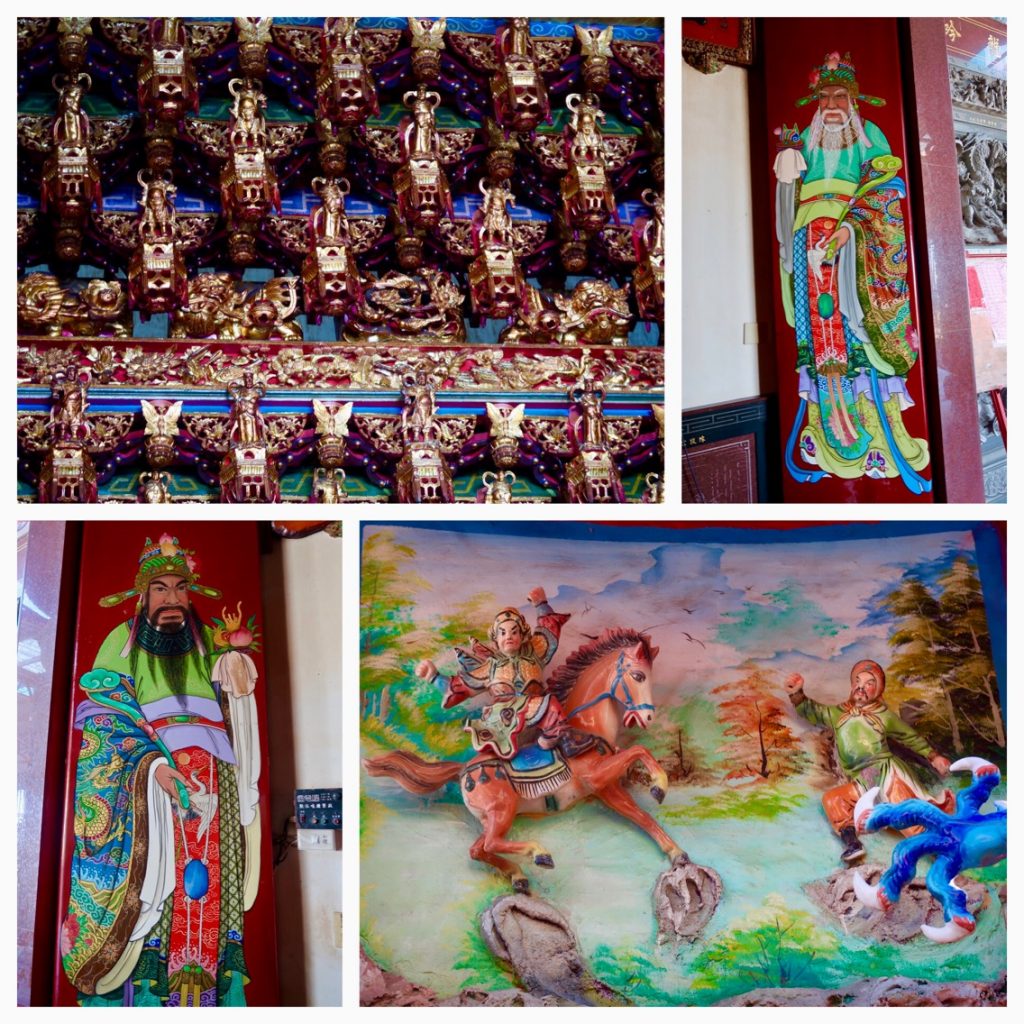 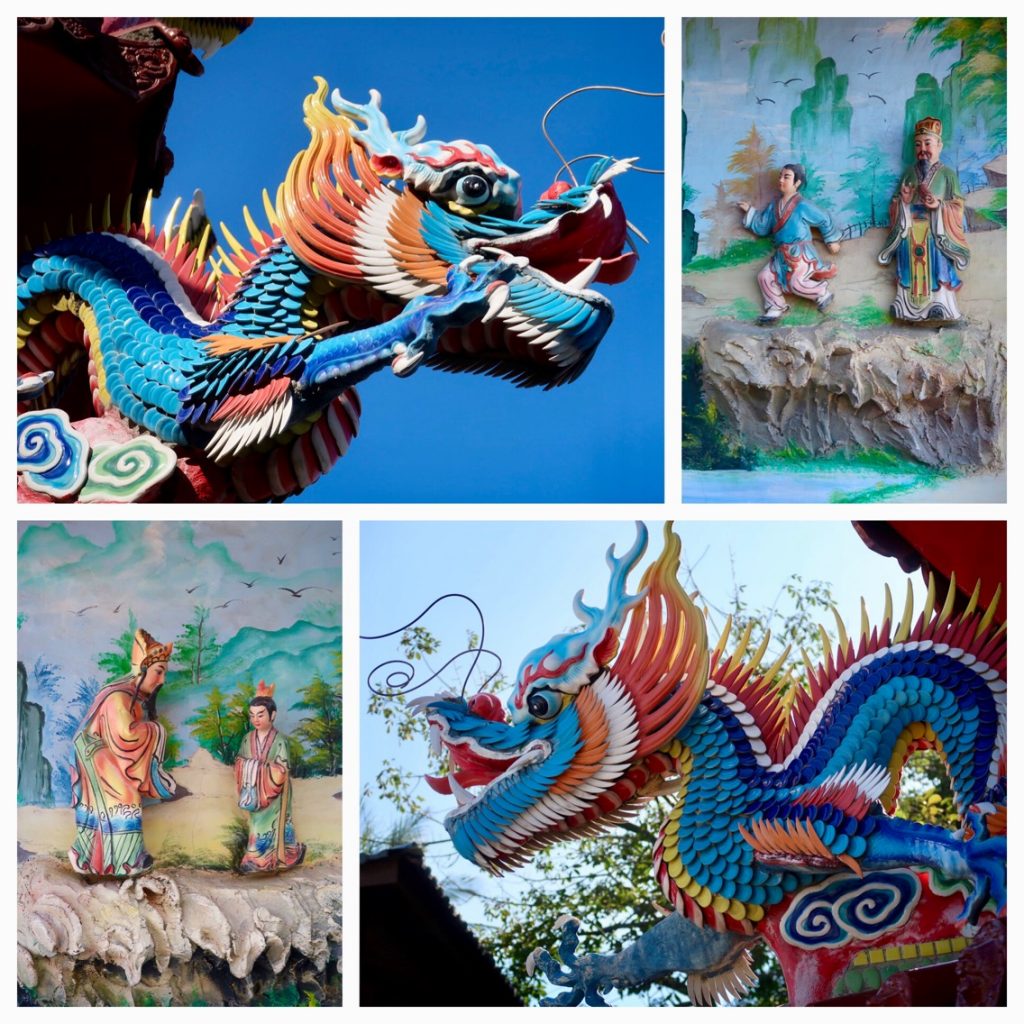 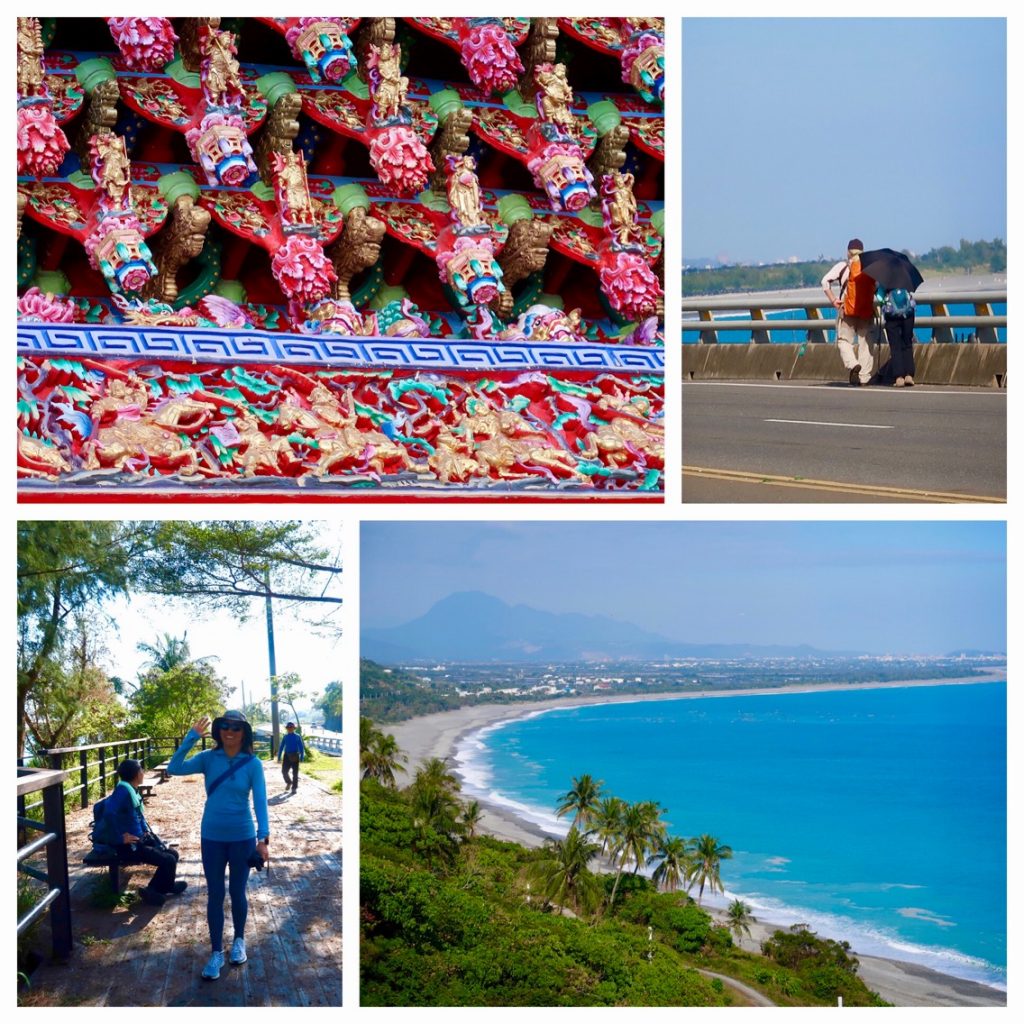 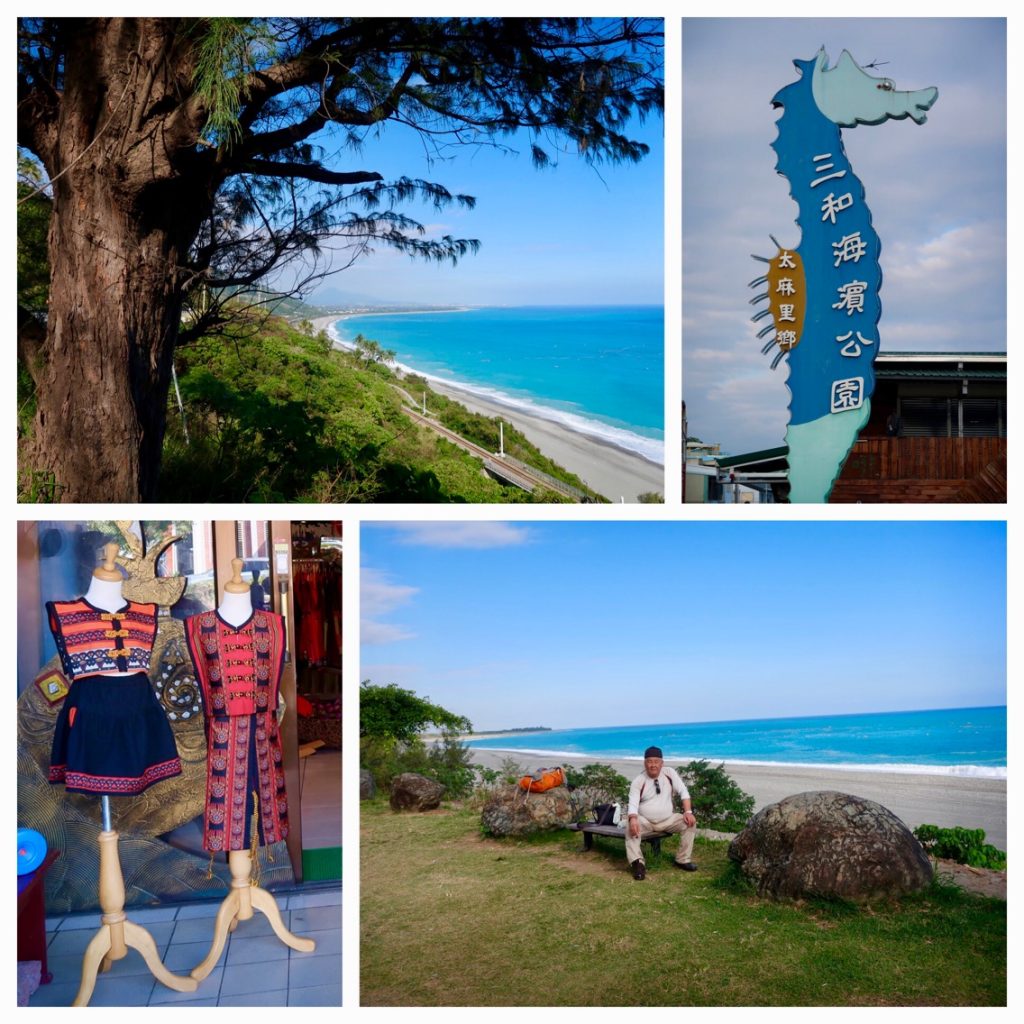 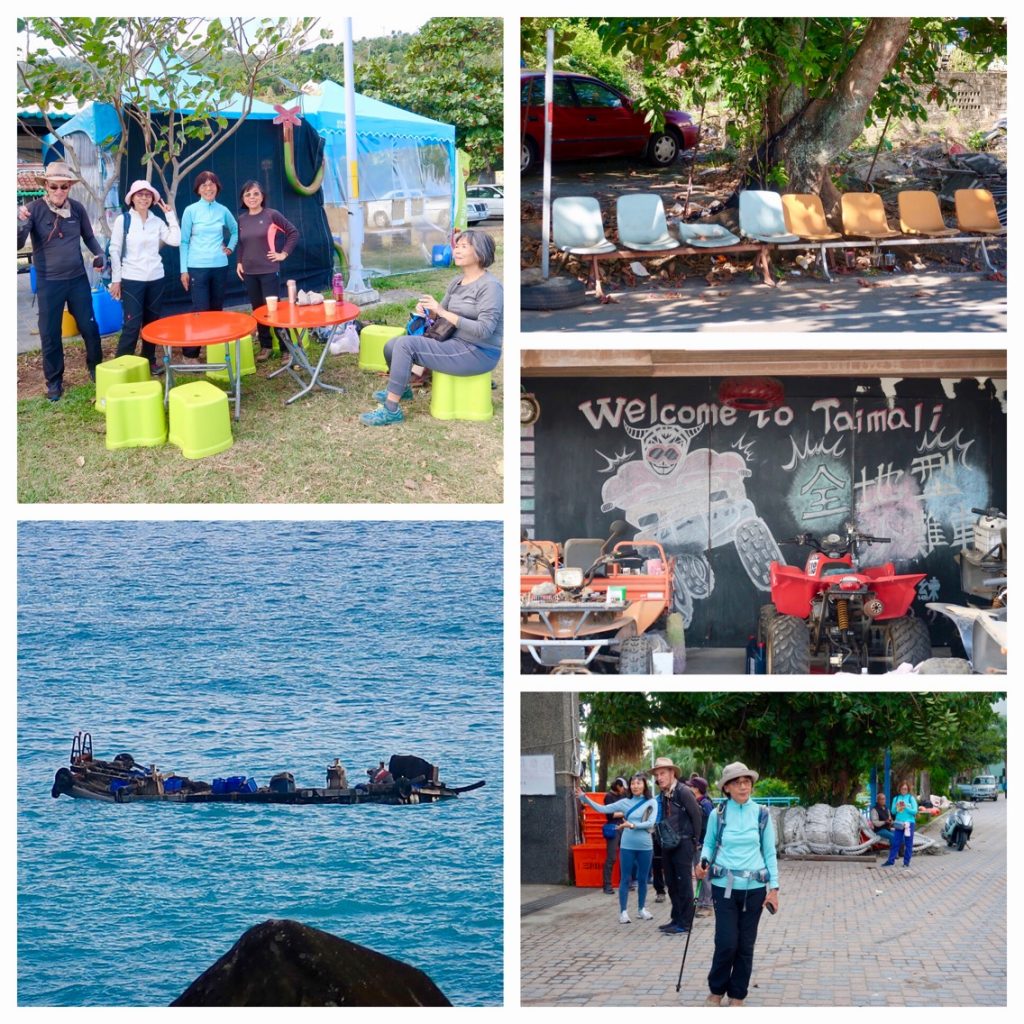 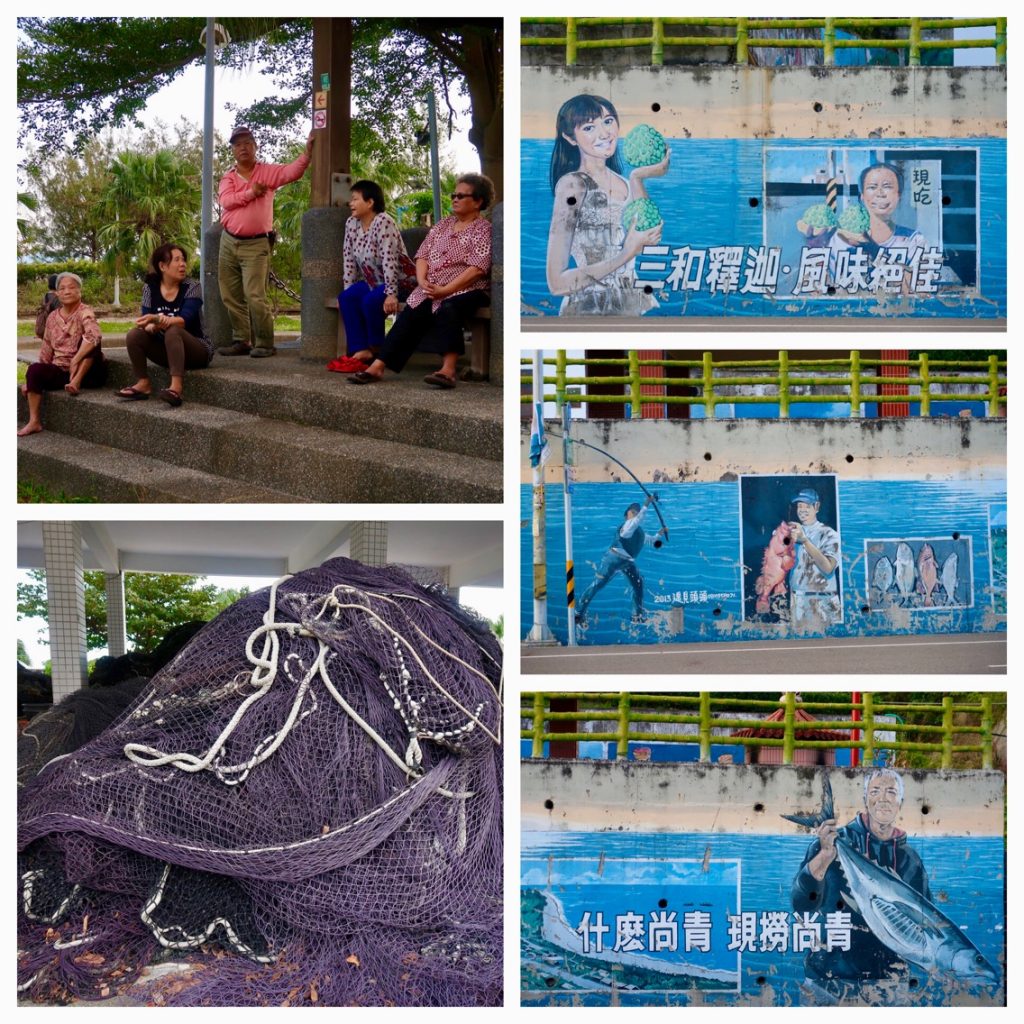 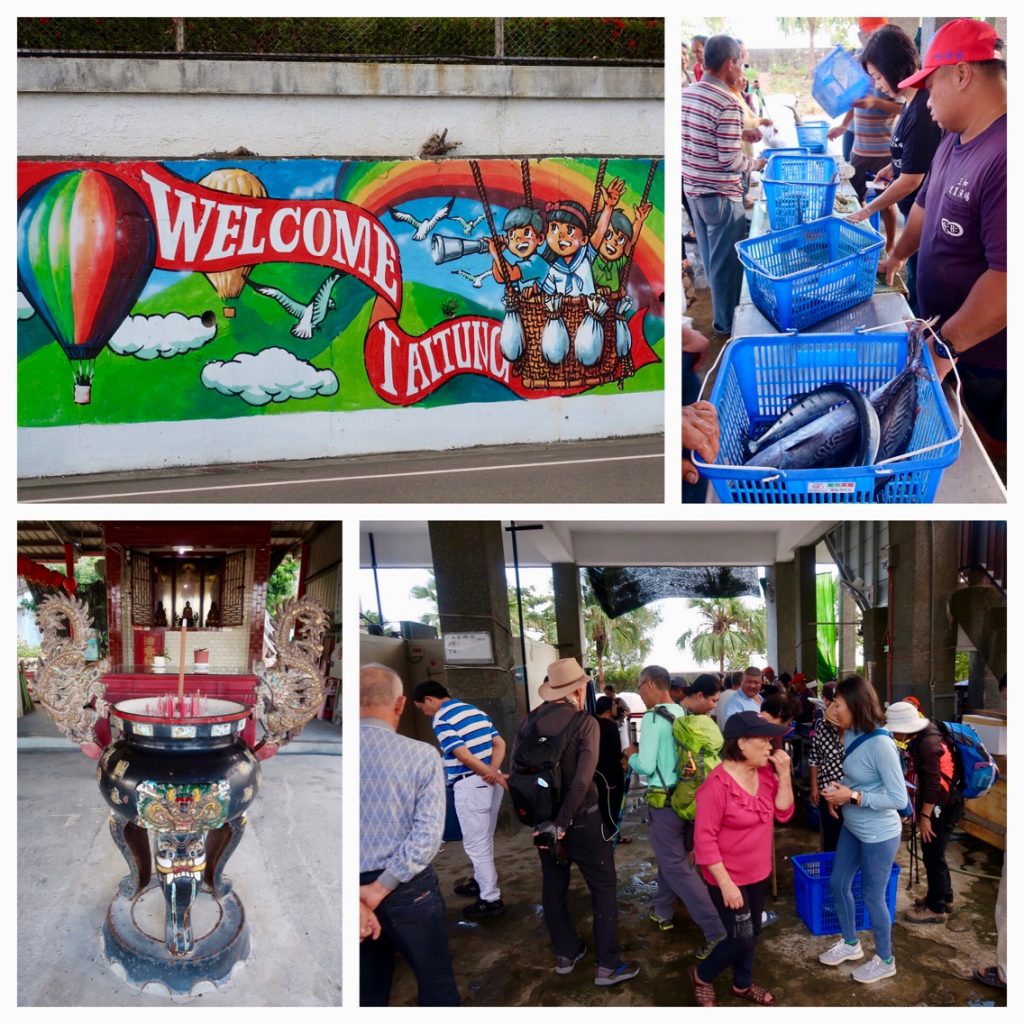 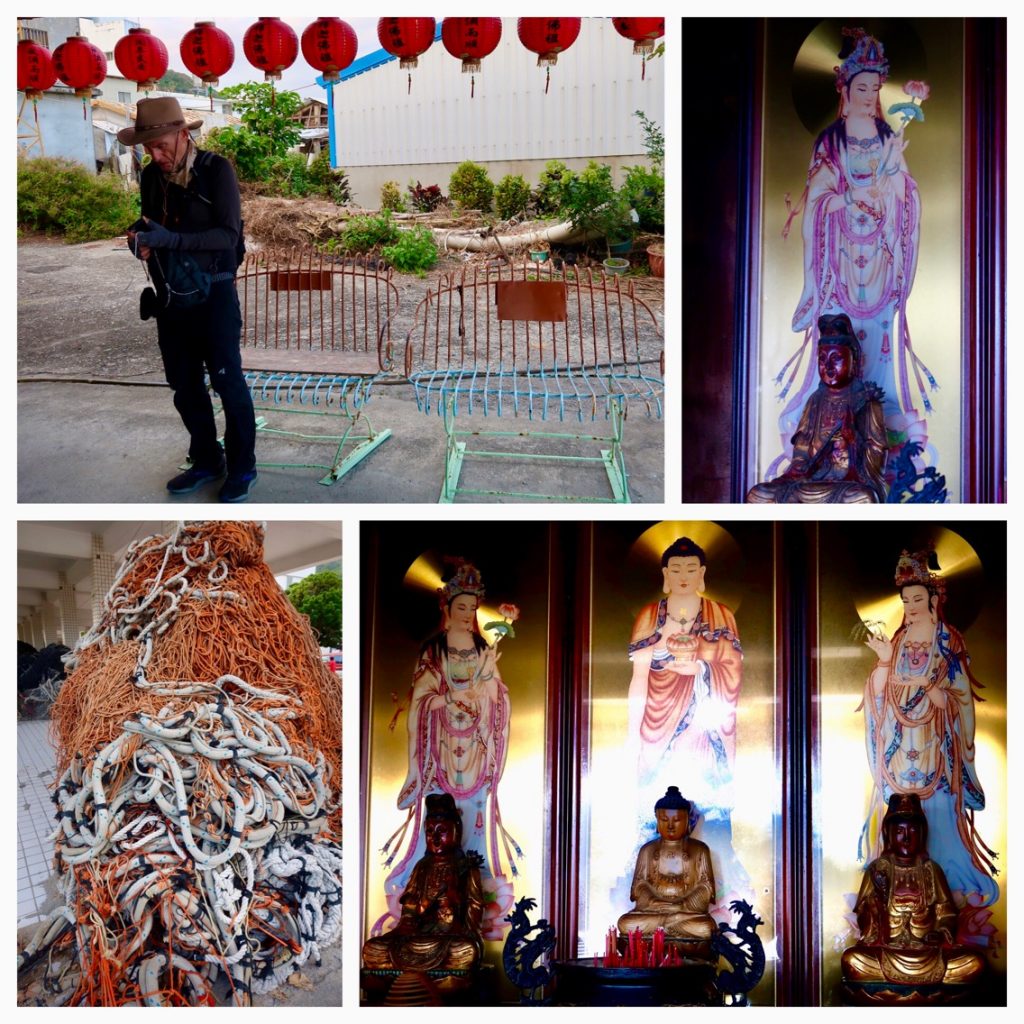 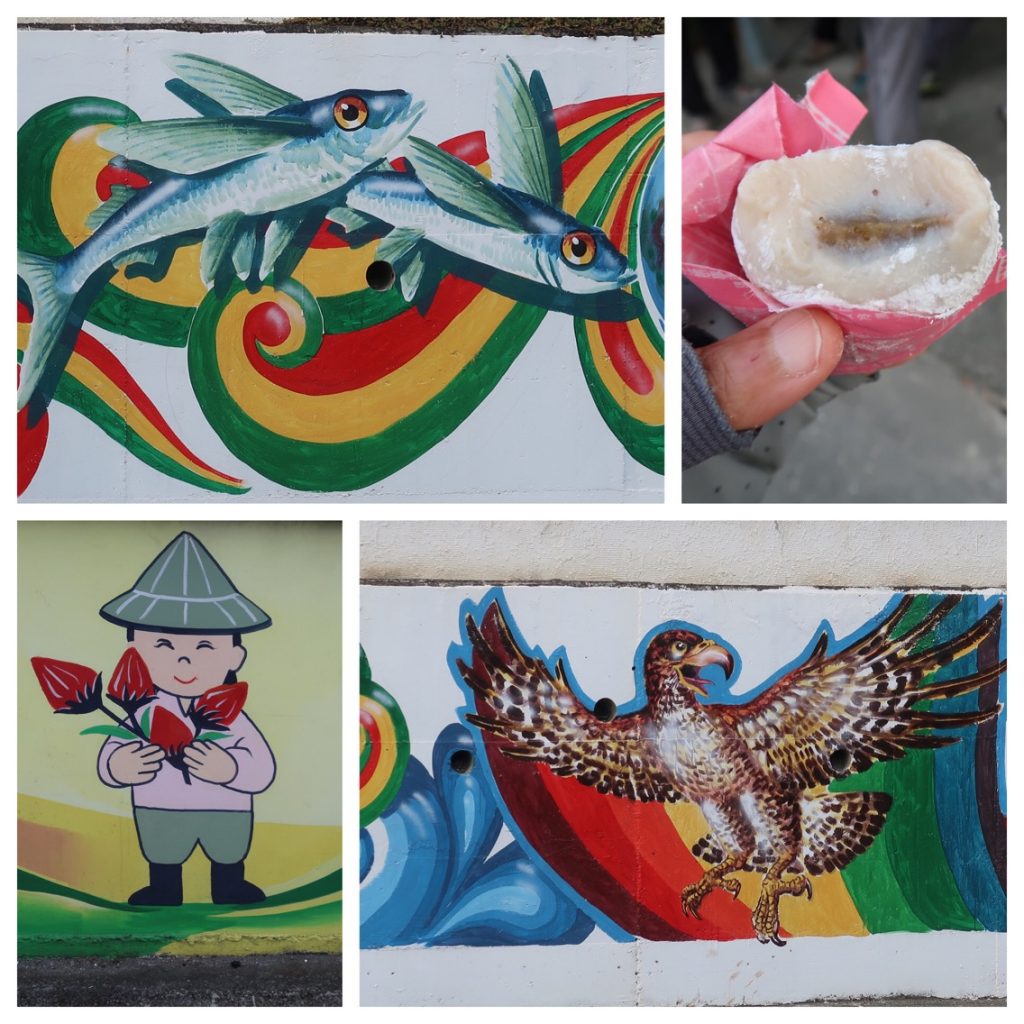 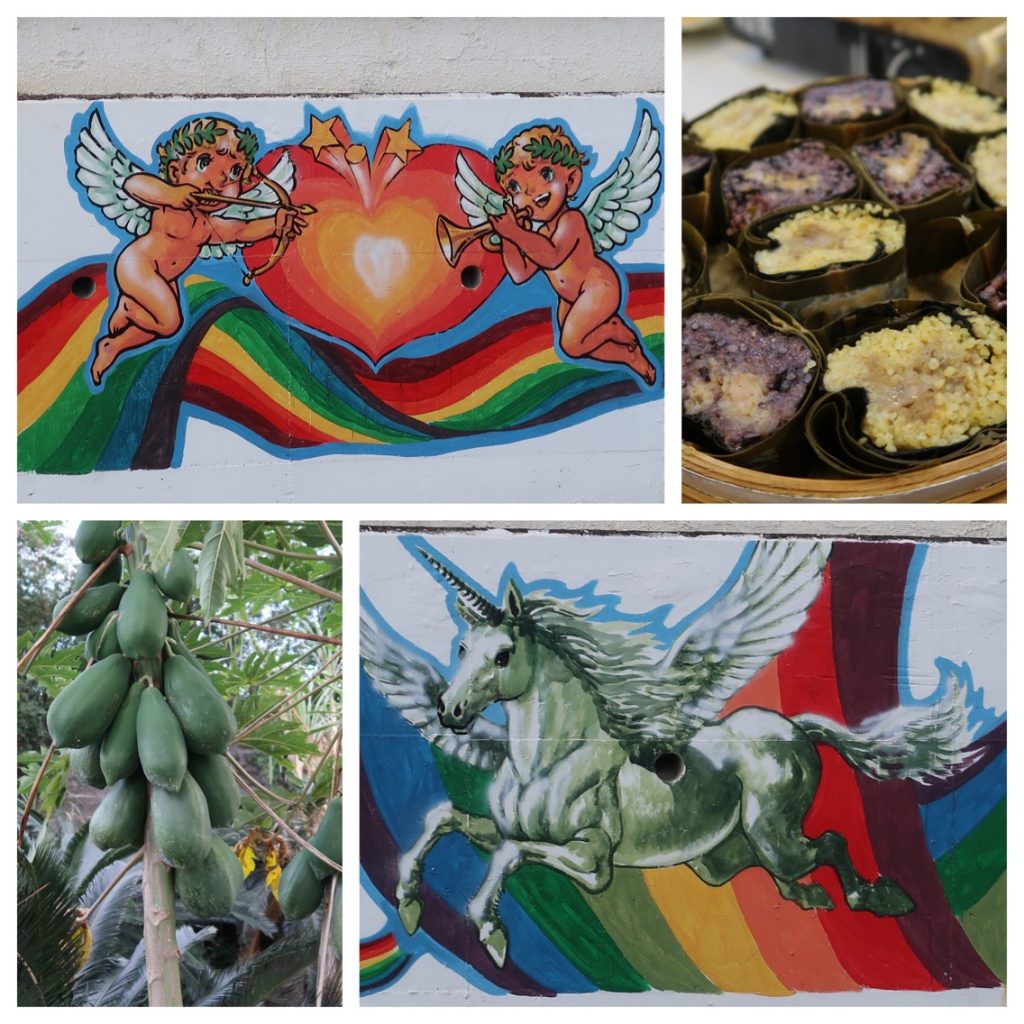 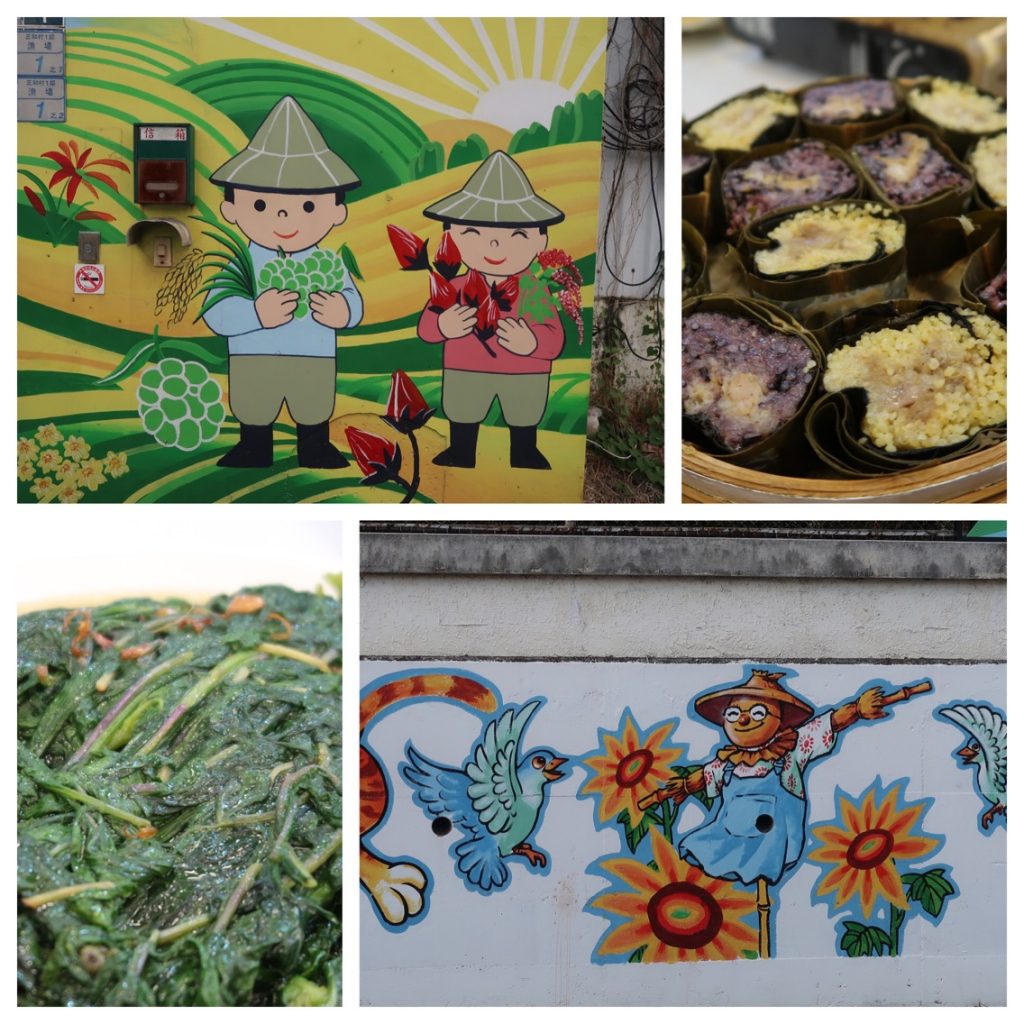 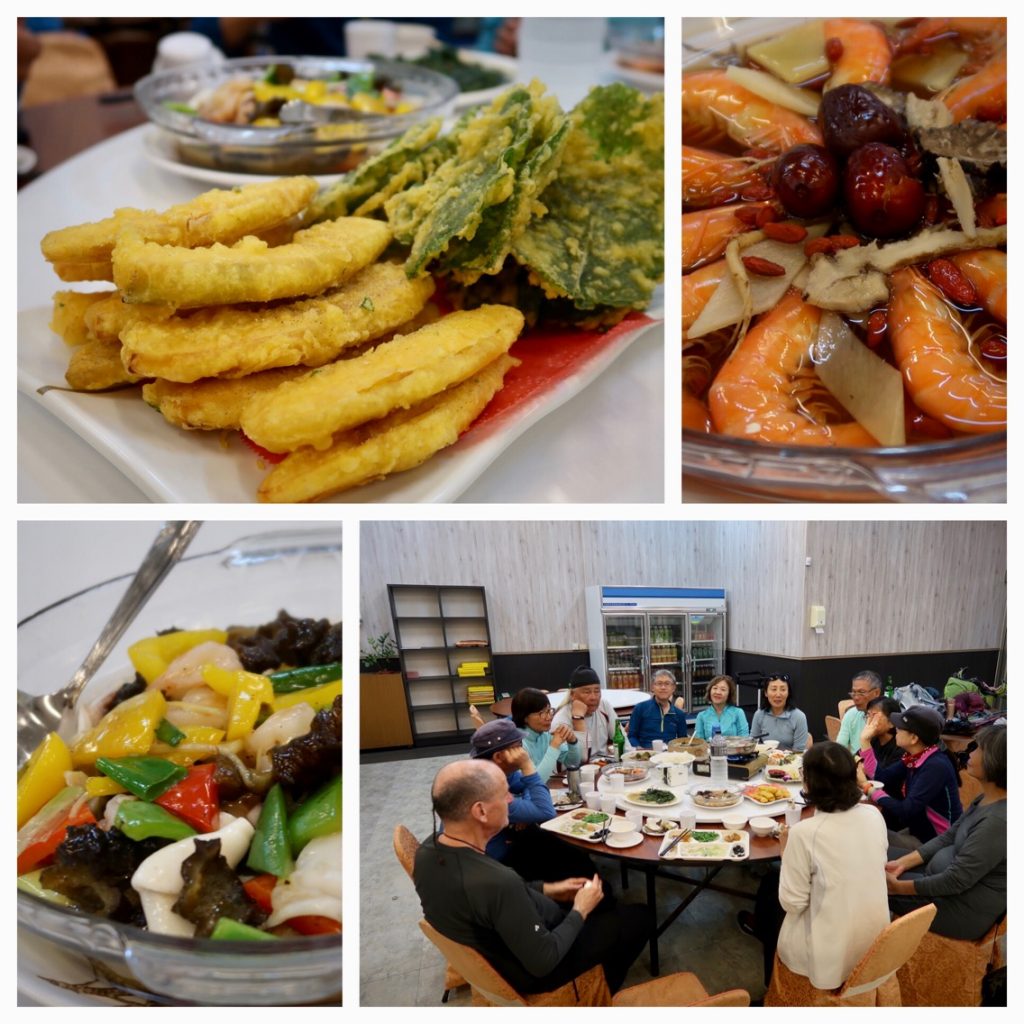 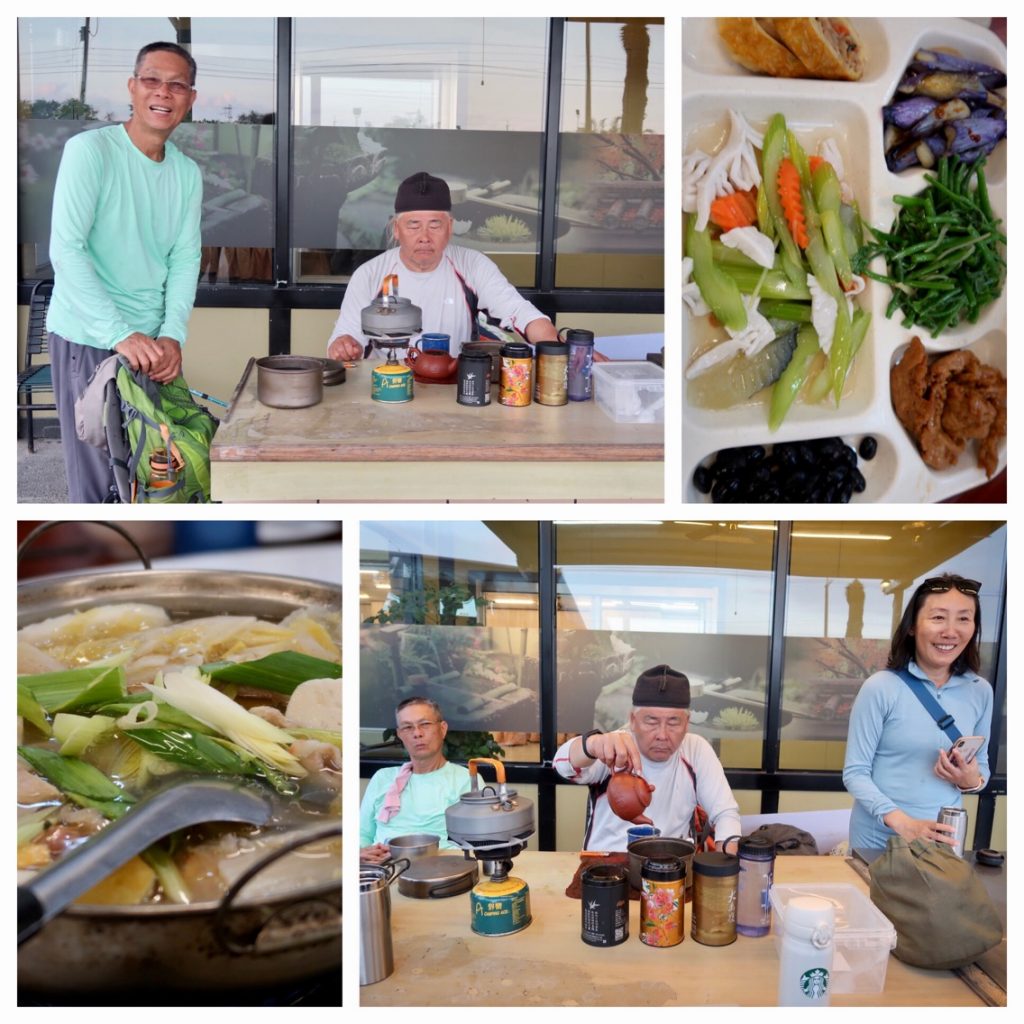 We had an early breakfast of crispy scallion crepes, and then walked back to our guesthouse to get ready for the day’s walk.
We started out walking through the village and then rejoined the coastal road.

We saw many groves of bananas, pineapples, custard apples which are locally called “Buddha’s Head,” and yellow millet.
The millet is used for cooking, for mixing with rice, and to make a millet wine that is very tasty, even though it does not taste like wine made of grapes.
It tastes similar to rice wine or Sake.

We passed by some villages where vendors sold the Buddha Head fruit.
I stopped in to one of them and asked to buy a piece of fruit that was ready to eat.
They normally sell big boxes of the fruit, which are not ripe to eat the same day, or the fruit will rot too soon, but the woman just gave me a ripe fruit to eat and refused to take any money.
It was delicious.

Some of the houses along the road were painted with lovely murals, and we stopped by a big temple to use the toilet and rest in the shade.
When it was time for lunch, one of the group members bought lunch for all of us.
I tried to pay the group’s lunch but was adamantly refused.
I persisted, but was refused repeatedly.
Finally I suggested that I would pay for dinner for everyone tonight, but was told that dinner was already spoken for, but that I would be able to pay for the drinks.

I find walking in a group to be very interesting.
I noticed that I was not so aware so much of myself and more aware of the dynamics of the group.
Instead of noticing the heat or the fatigue or any physical pain, I felt like the walking was very easy.
Of course walking without heavy backpacks is also so much easier.

In the village where we ate our lunch, I saw a woman selling tea made from small green figs.
She sliced and dried the figs and then used them as you would use tea leaves, soaking them in boiling water and allowing them to brew.
It was delicious.

In the late afternoon we stopped at a rest area and park by the ocean, that had a van with a friendly woman selling coffee.
We all sat to rest and drink some refreshments.

Another van was selling bags of dried “Day Lilies,” which are used to make soups or sautéed dishes.
Since I have tasted fragrant day lily dishes in the dinners and lunches we have been having, I bought some to try to cook at home.

The guesthouse we will be staying at tonight does not serve dinner, and it is not near any restaurants.
It was decided that we would continue walking until dinner time, and that we would eat dinner before checking into the guesthouse.

Since we were walking by a small fishing village, the group suggested that we take a detour to see the fishing port.
The fishermen will be coming back from the sea soon, and we could see how the traditional raft boats ride the waves, and what fish they were able to catch.

The fishing port was buzzing with activity.
Buyers from nearby restaurants had already bought most of the fish before the fishermen even returned from the sea.
The fishermen had already photographed the fish that they had caught and sent the photos to the sales office at the port, where the buyers were waiting.

We saw the boats approaching the shore from an observation deck by the port.
The officers of the marine patrol waited for them at the shore.
We were told that they inspected the boats daily, to make sure there were no smuggling or illegal activities.

The port and the little village have a small temple with a deity called Matsu. (Also Mazu)
Matsu is the guardian God of the fishermen, ensuring a good catch and the safety of the fishermen.

With a longer detour, we got to the restaurant at which we were to eat dinner, right before sunset.
The Tea Master was already waiting for us, with his full tea regalia set up.
His light oolong green tea was so refreshing to me, I drank many cups of tea and even filled my thermos.

The dinner was delicious and contained many local specialties.
Jules and I, who normally do not drink any alcohol, tried to refuse to drink Taiwanese beer, but were told that since we had volunteered to pay for everyone’s drinks, nobody would drink anything if we did not drink also.

Being hot from the walk, the beer tasted refreshing, and we were able to drink a little.
The drinks bill was so small, that I tried to also pay for all, or at least half the meal’s cost, but the Tea Master’s wife refused my offer as if it were a huge insult.

During dinner I got to know a little bit more about the group, which hikes together every Sunday.
Some of them have even climbed all of the 100 tallest mountains in Taiwan.

After dinner we all walked the last three kilometers in the dark to our guesthouse.
The guesthouse was awesome, nice and airy and owned by a young couple who had just had a baby.
The wife spoke excellent English and was very friendly.
It was a great walking day, I feel almost sad that this trip is so short…..

← Taiwan Walk – Day 7 – Joining The Walking Group, And Walking From Longxi Station To Jinlun Village
Taiwan Walk – Day 9 – From Taimali Township To Taitung City, Visiting Our Puppies, And The Fabulous News That Puppy Tai and Puppy Wan Were Adopted →