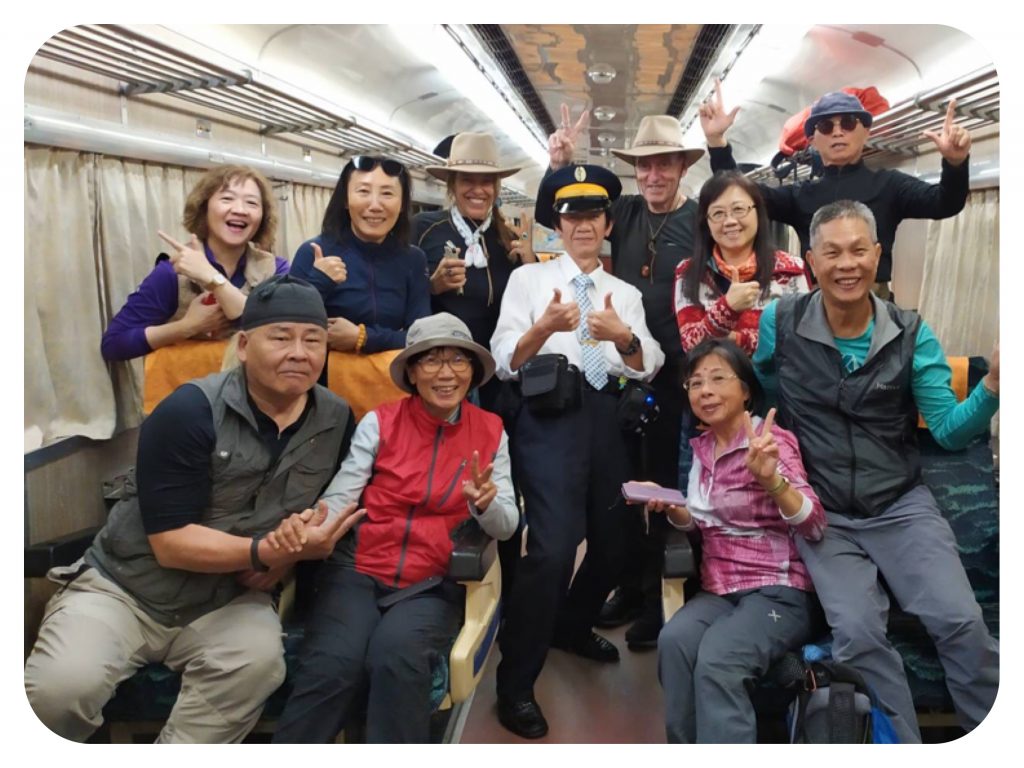 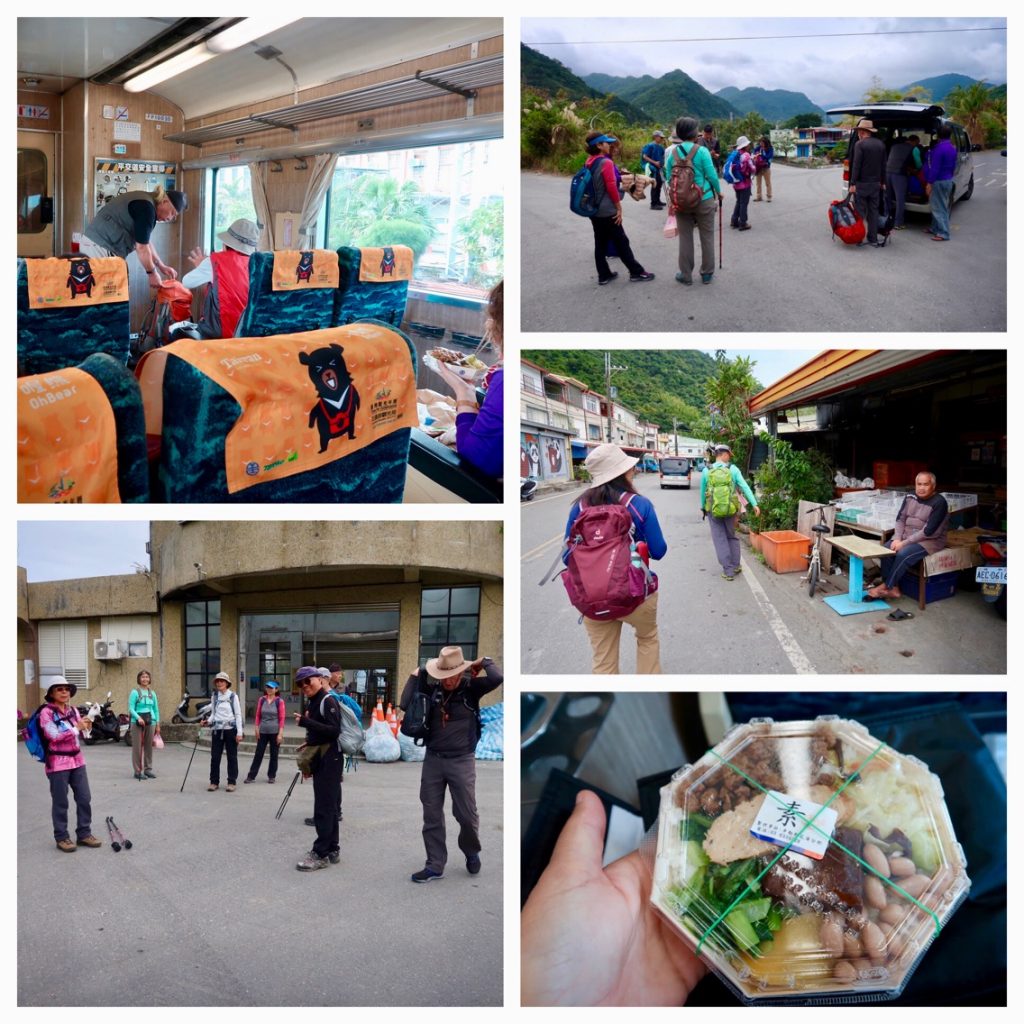 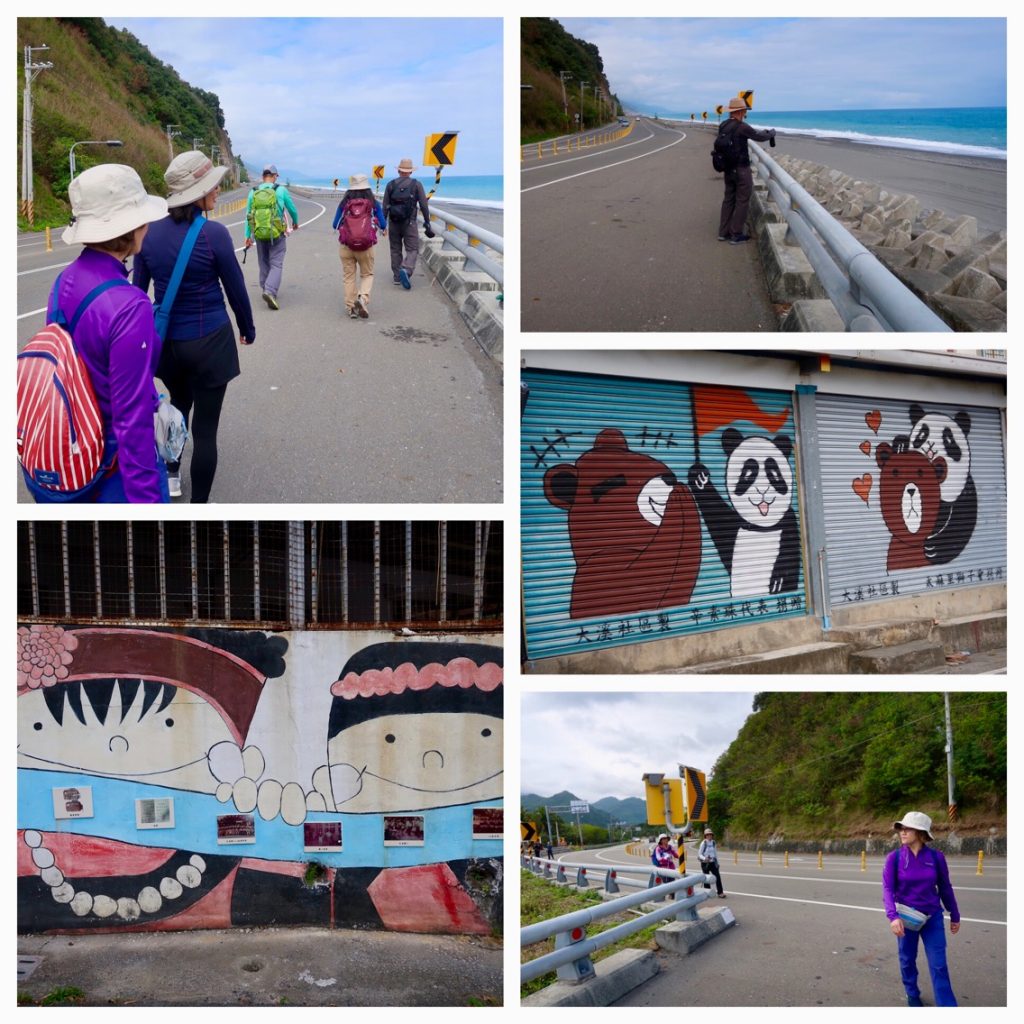 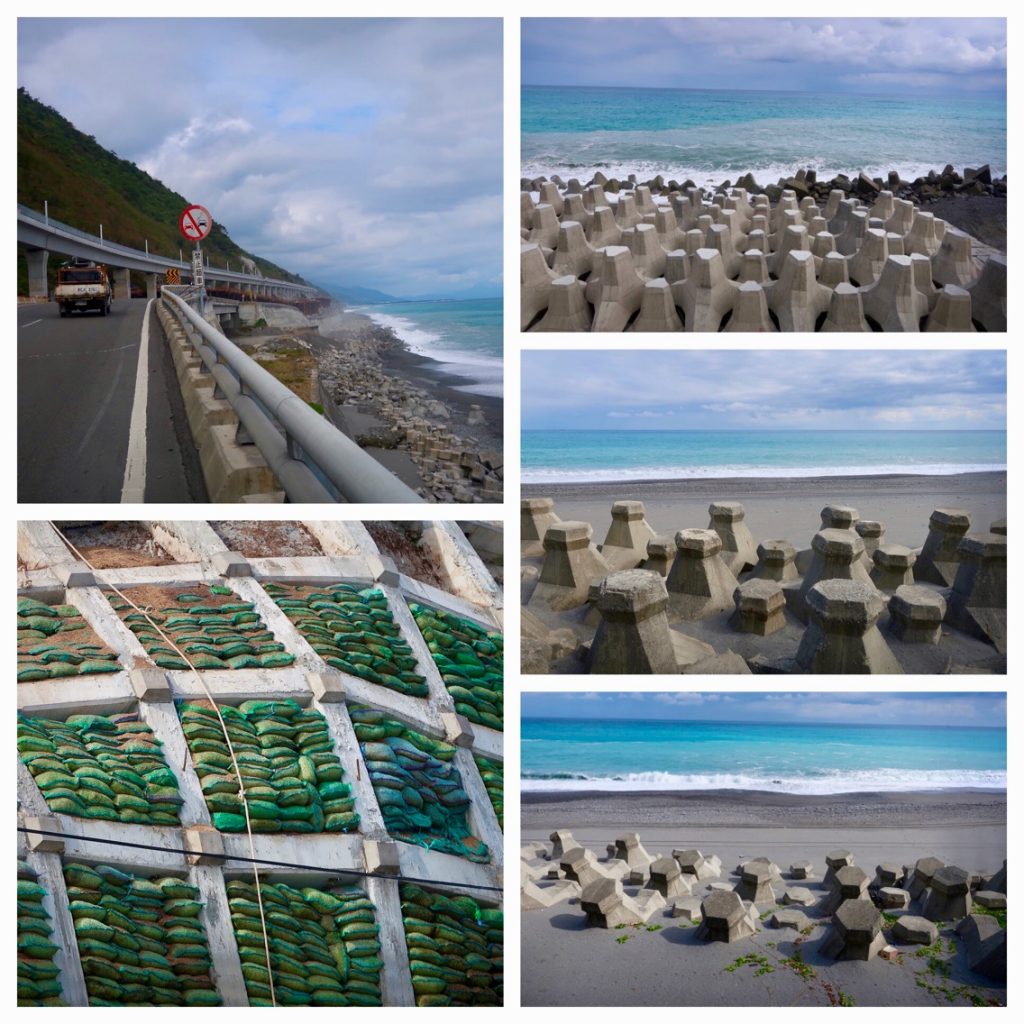 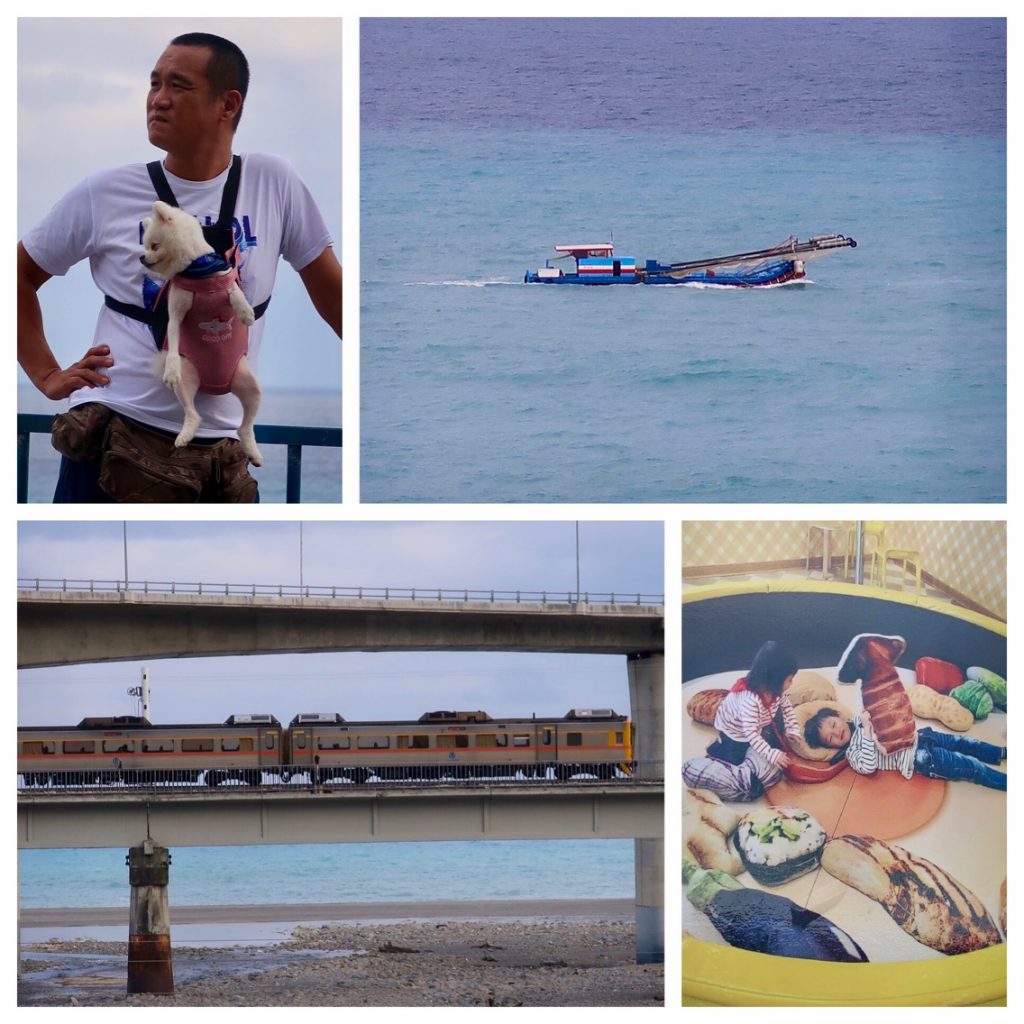 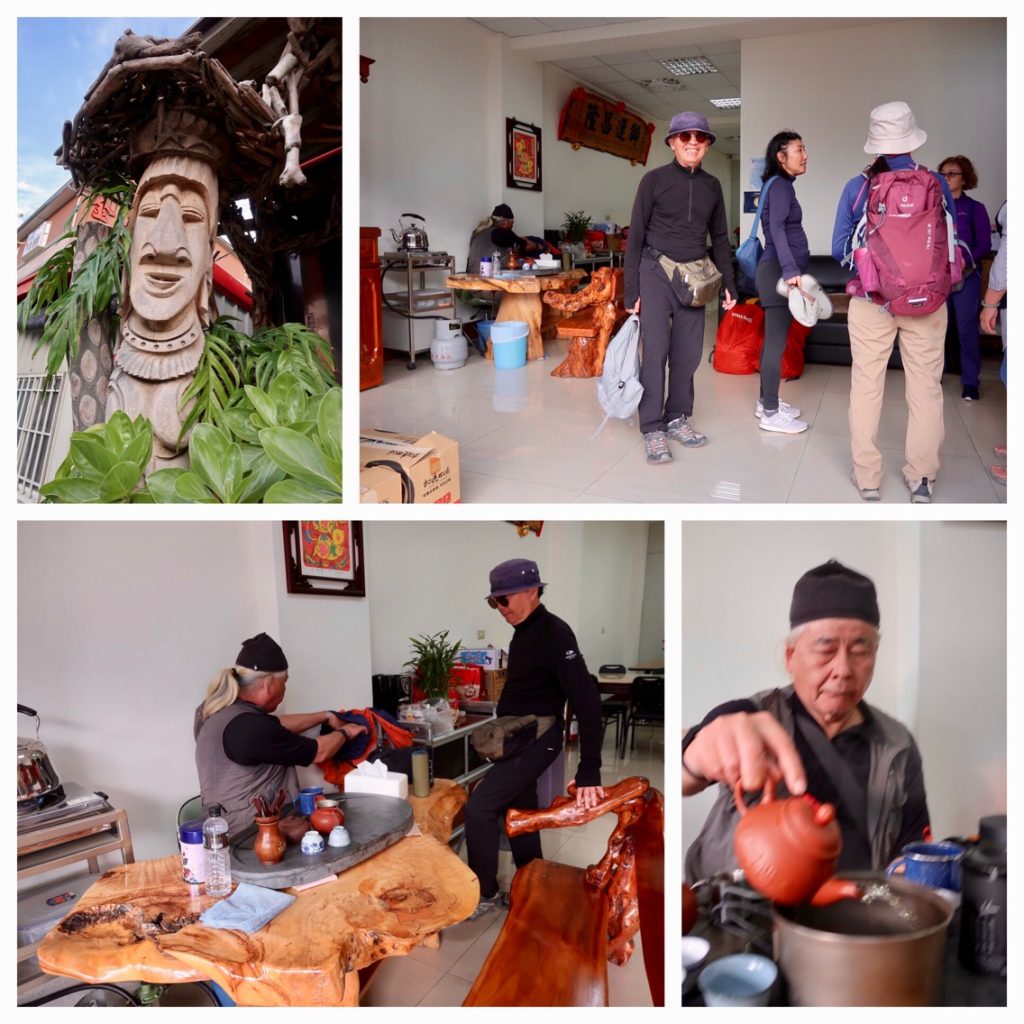 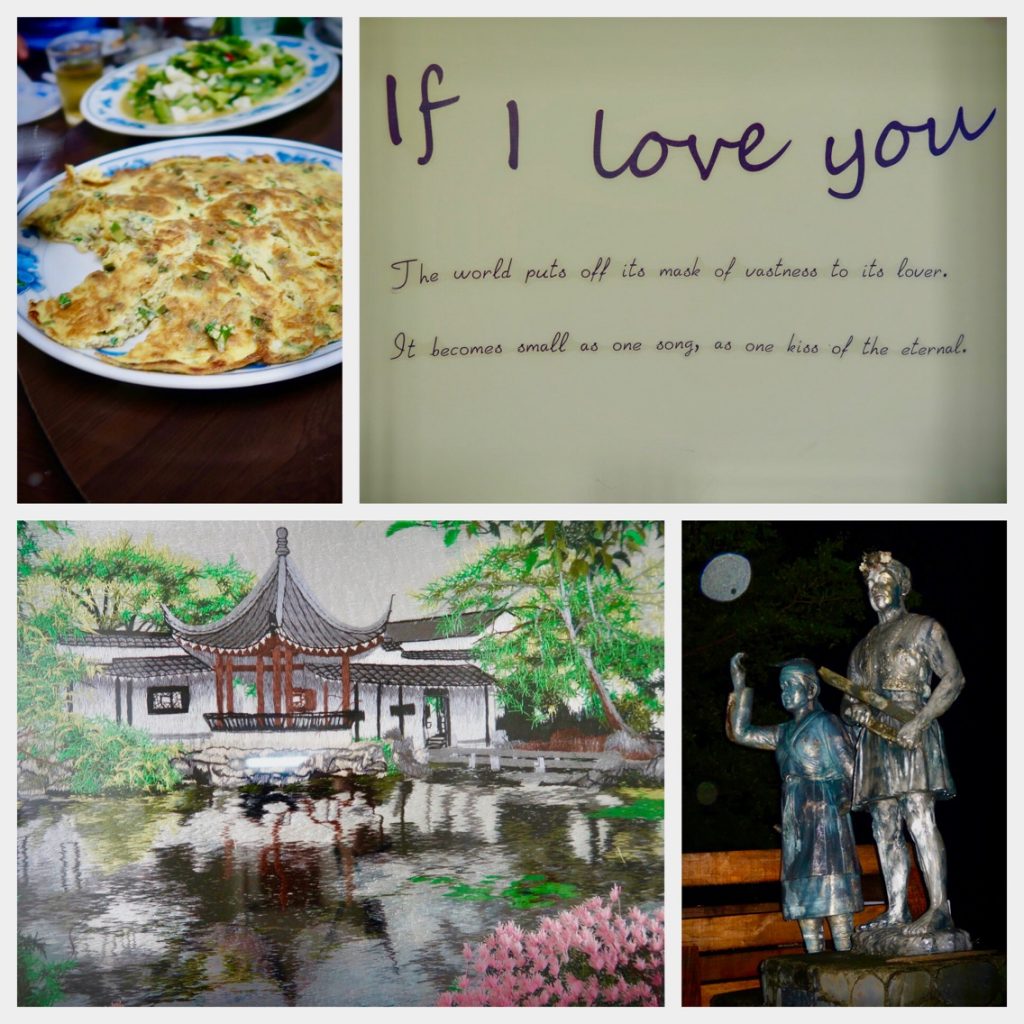 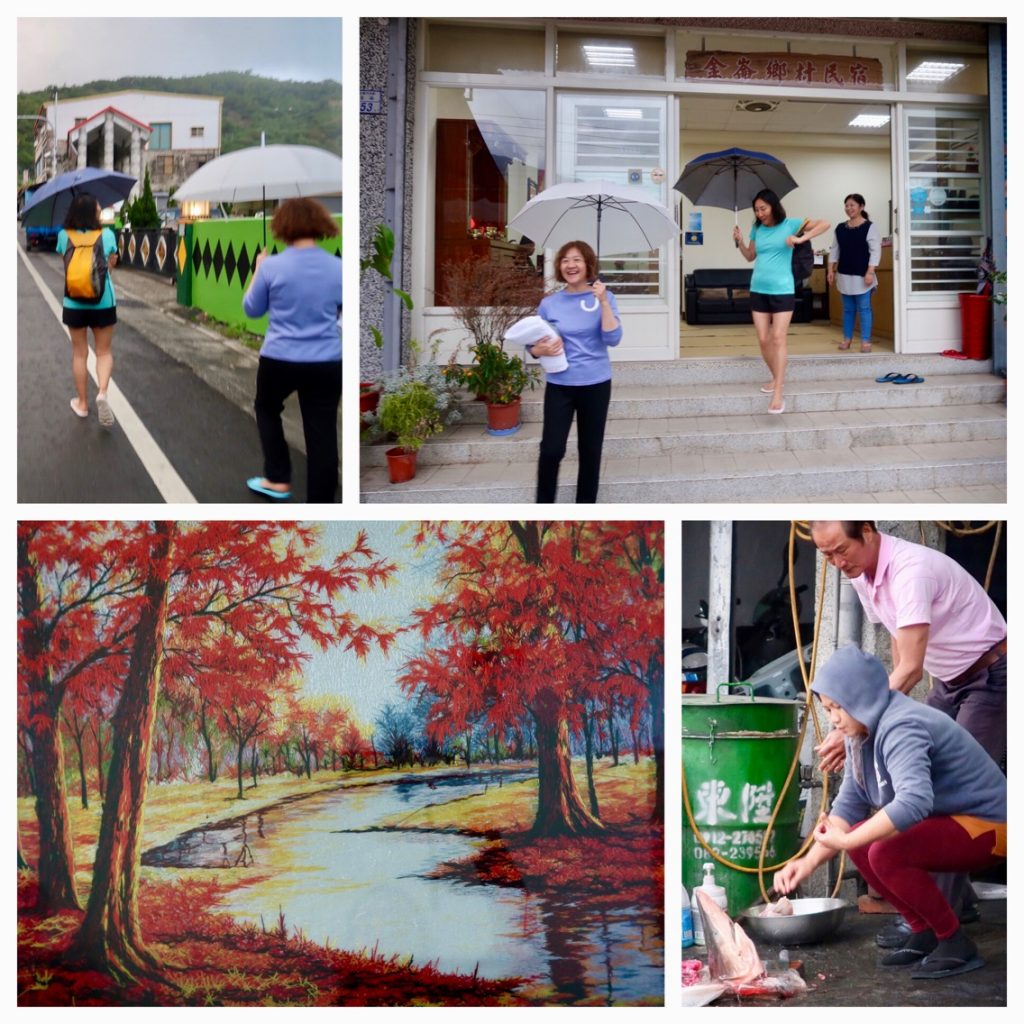 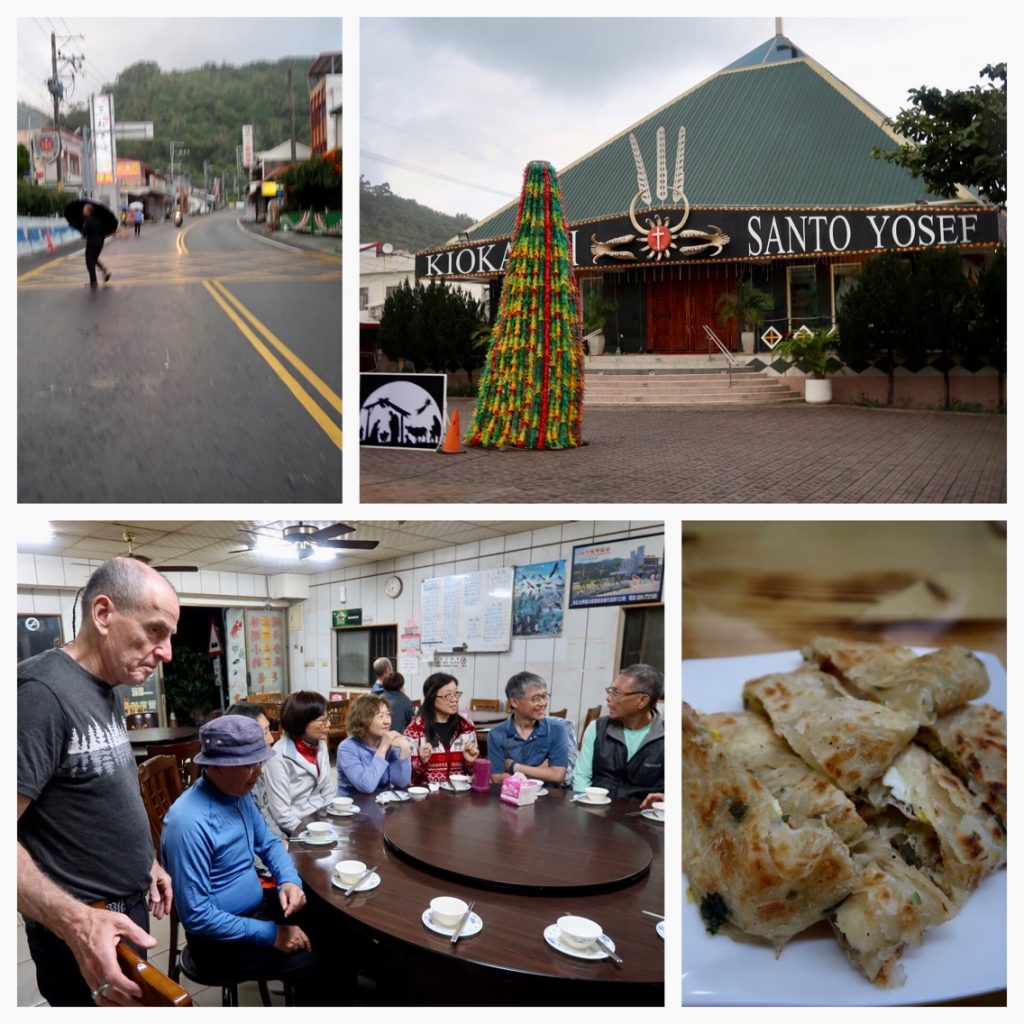 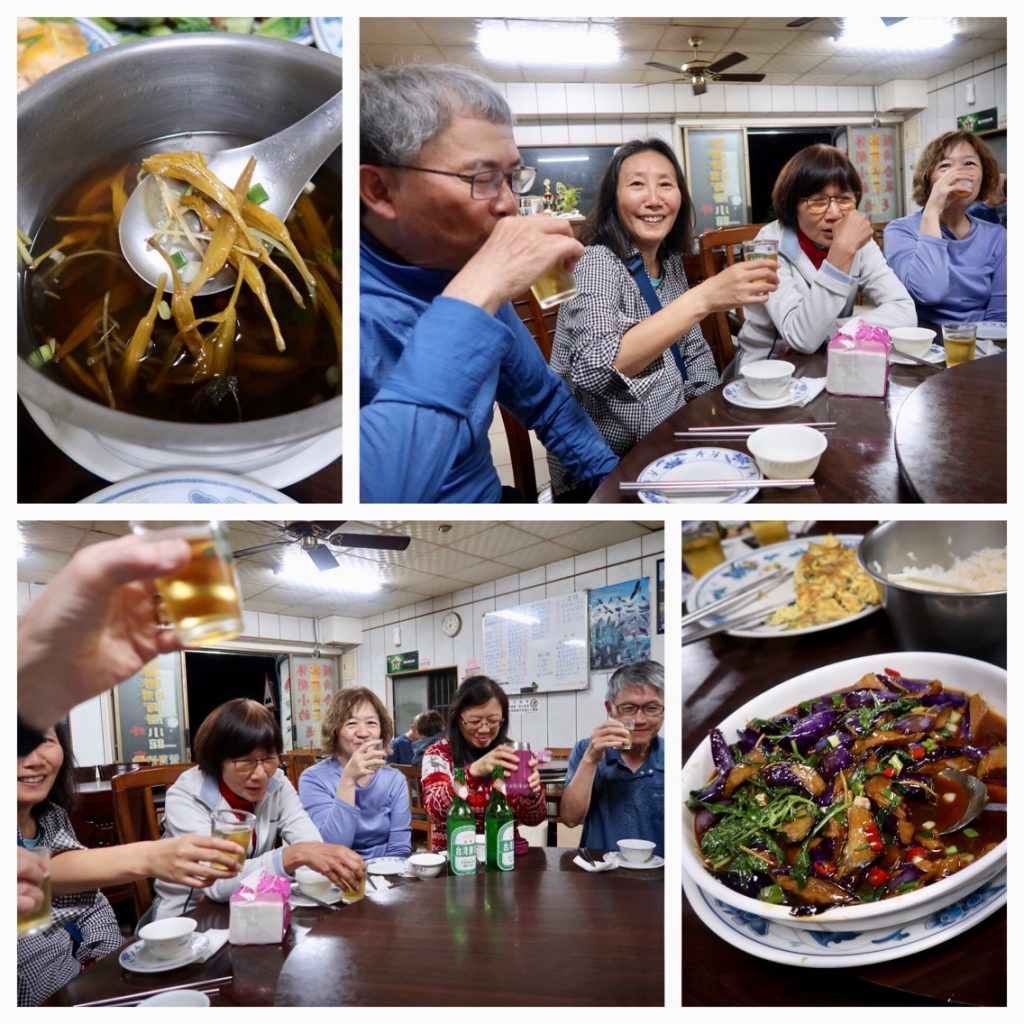 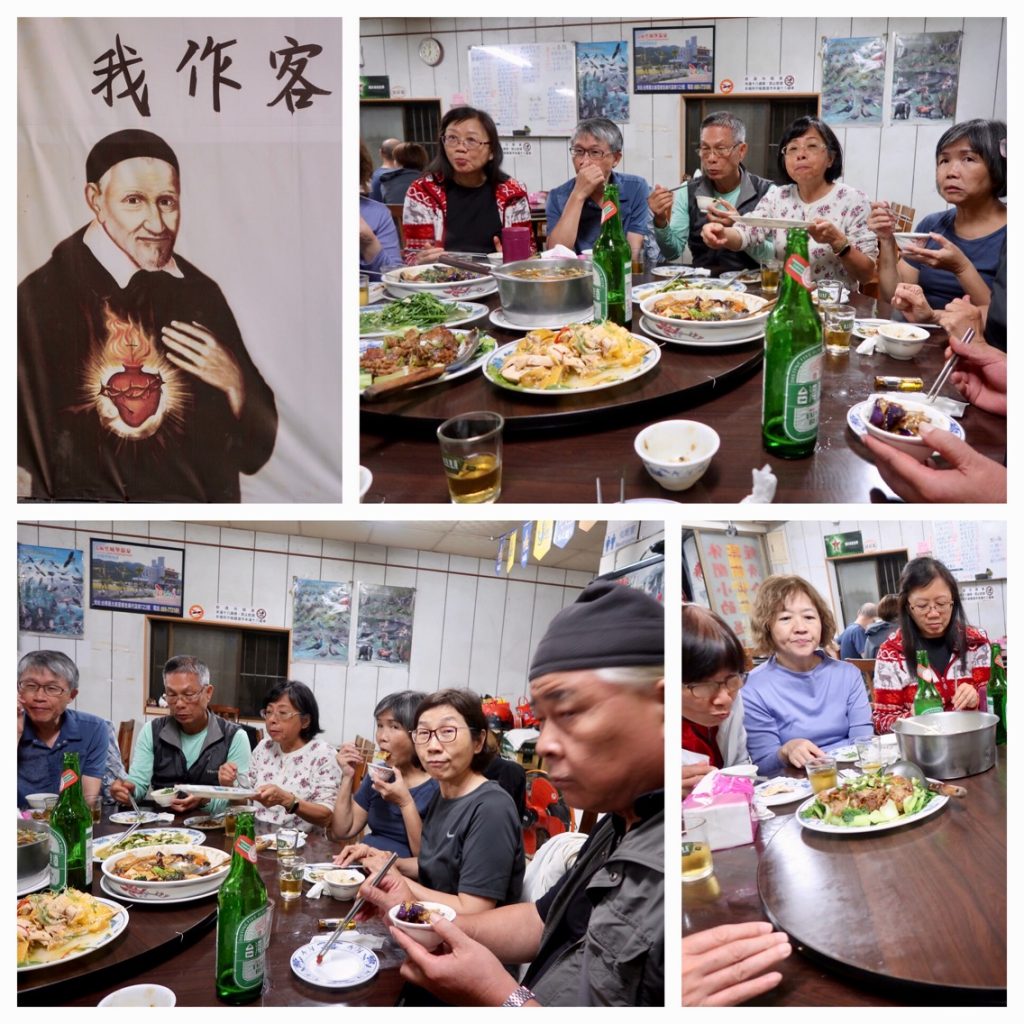 Jules and I have never walked as members of a group of people.
So back home, when Wendy suggested that we join her walking group and continue our walk along the East Coast of Taiwan, I was a little hesitant.

I wasn’t sure that the group would welcome Jules and me, and I knew that most of them do not speak any more English than we spoke Chinese.
I am SO happy that I did not allow my secret doubts to stop me from enjoying this wonderful experience.

Walking with a Taiwanese group turned out to be a real pleasure.
Everyone constantly thinks of the others, is concerned about their high spirits, and buys food, drinks and other treats for everyone.
It was a pleasure to observe such behavior.

To meet the group, we had to take a train south from Taitung city, meet the group on the train and then start walking back North towards Taitung.
It will take us three days of walking to cover the distance.

Before leaving for the train station, we stopped to feed our puppies and hug them one last time.

The train from Taitung was fifteen minutes late.
When we got on the train and met the group, they told us that the train was late because of them.
A few of the group members were getting to the train station by bus, and their bus was late.
They called the train station and the train was held, waiting for them to arrive.
Holding a train for three people to join their group is something so unique, that it truly warmed my heart.

The conductor checking the tickets was surprised to see Jules and me going south.
Foreigners usually take the train from Taitung north, towards Hualien or Taipei, but only rarely do they go south.

Our group explained that we were walking together, and the conductor, who said he is retiring soon, asked us to take a souvenir video and photos together.
He drew down the curtains to get a better photo and all of us posed for a few photos together.

Amy, the woman who organized the guesthouse bookings, had arranged for a packaged lunch for each of us.
For Jules and me she provided two vegetarian packed lunches, with rice, cooked vegetables, pickles, roasted pumpkin, bean, seaweed and a slice of Saiten mock meat.
We were still full from our breakfast, so we packed our lunch boxes away to enjoy later in the day.

We got off the train at Longxi Station, where we met another member of the group who had walked longer that morning, and a local driver who will transfer all of our backpacks to our guesthouse for the night.

The walk started nicely, as we walked among orchards of Custard Apples, called locally “Buddha’s Head.”
Buddha’s Head grows abundantly in the Zhiben hot spring area, but also all along the southern part of the East Coast of Taitung.

Then we turned onto the main road, and started walking along the busy car road.
There were a few places where we had no bike path, and it was unpleasant to walk so close to the traffic, wedged between the road construction and the speeding cars.

Usually when I walk on busy roads, I put on my earphones and listen to books on Audible, instead of listening to the noise of the traffic.
But in this case I needed to see and hear the oncoming traffic.
I also walk faster when I am on busy roads, wanting to get off the highway as quickly as I can.

I later became aware that walking too fast is not a good idea when you are walking with a group.
The group might change the plan of where we are having lunch, or wish to make rest stops, and It would be better keep a pace that allowed them to keep in touch with me.

A cyclist who was cycling with his wife around Taiwan stopped his bicycle to chat with us.
He told us that he plans to complete his cycling trip around the island in six days.
When we expressed our admiration, he told us that his record of cycling around Taiwan is five days.
He asked to take a photo with us and we wished each other well.

We took a break from walking by the road at an old train station converted into a scenic observation spot.
There were toilets, and vendors selling food, souvenirs, ice cream and fresh fruit juices.
The whole group of walkers soon arrived, and we all rested for awhile.

The rest of the walk in the afternoon was under a cloudy sky, which made it less hot and more pleasant.
We arrived at Jinlun Village just before sunset.

One of our group members, whom I fondly called “The Tea Master,” had walked ahead of the group, so that he had time to set up his tea set in the lobby, at the entrance to the guesthouse.

On a grey marble slab he set up his big pot of water, his camping gas fired stove and his selection of teas.
He brewed his loose tea in the traditional Taiwanese way.
He first poured hot water on the loose tea leaves, which he had placed in a small earthenware (clay) pot.

After the tea leaves were soaked, he poured the extraction into another tea pot with an open top.
Then he added more boiling water and poured it into small tea cups he carried with him.

Some of the members of the group carry their own cups, and we were invited to sit in front of the tea master and drink cup after cup of delicious Oolong tea.
It was so restful and refreshing that I did not even go to our room.

Jules took our backpacks upstairs to our room and reported that the room is very comfortable, and much better than we had thought.

The night before, when I looked at photos of the guesthouse online, I asked Wendy if she thought it would be OK if Jules and I stayed at the original guesthouse where the group had first planned to stay, which had nicer rooms and an Onsen hot springs.
Wendy advised me not to, saying everything would be fine, and that we would be able to go bathe in another Onsen in town.

I was SO happy that I listened to Wendy.
The guesthouse was charming and I was comfortable, and it was nice to be around the group.

Joseph and Wendy took us on a short walk to an Onsen that had private rooms, where each couple could bathe naked, instead of wearing our bathing suits and soaking outdoors in the communal baths.

After our refreshing soak, we walked with the whole group to dinner.
The restaurant had prepared more than a dozen dishes of delicious foods, with extra attention to vegetables and vegetarian foods for Jules and me.

I looked at the kind faces around me, they looked so friendly and caring, I felt so fortunate to be walking with them.
A couple from the group paid the entire dinner bill, and another solo woman paid for all our drinks and beers.

Back in the hotel, the tea master had set up his tea station for all of us to have one more cup of tea before we went to sleep.
This time he brewed another kind of tea.
I was amazed that he carried his entire tea setup in his backpack.
Joseph told me that the Tea Master does that every week, whenever he goes on hikes.
All he asks when climbing a mountain, is that some members of the group carry some of the bottles of water he would later boil for the tea.

That night I slept with a heart full of gratitude.
With love to you,
Tali