Taiwan Walk – Day 5 – Chenggong Township To Donghe Township, And How We Became The Guardians Of Four Abandoned Puppies 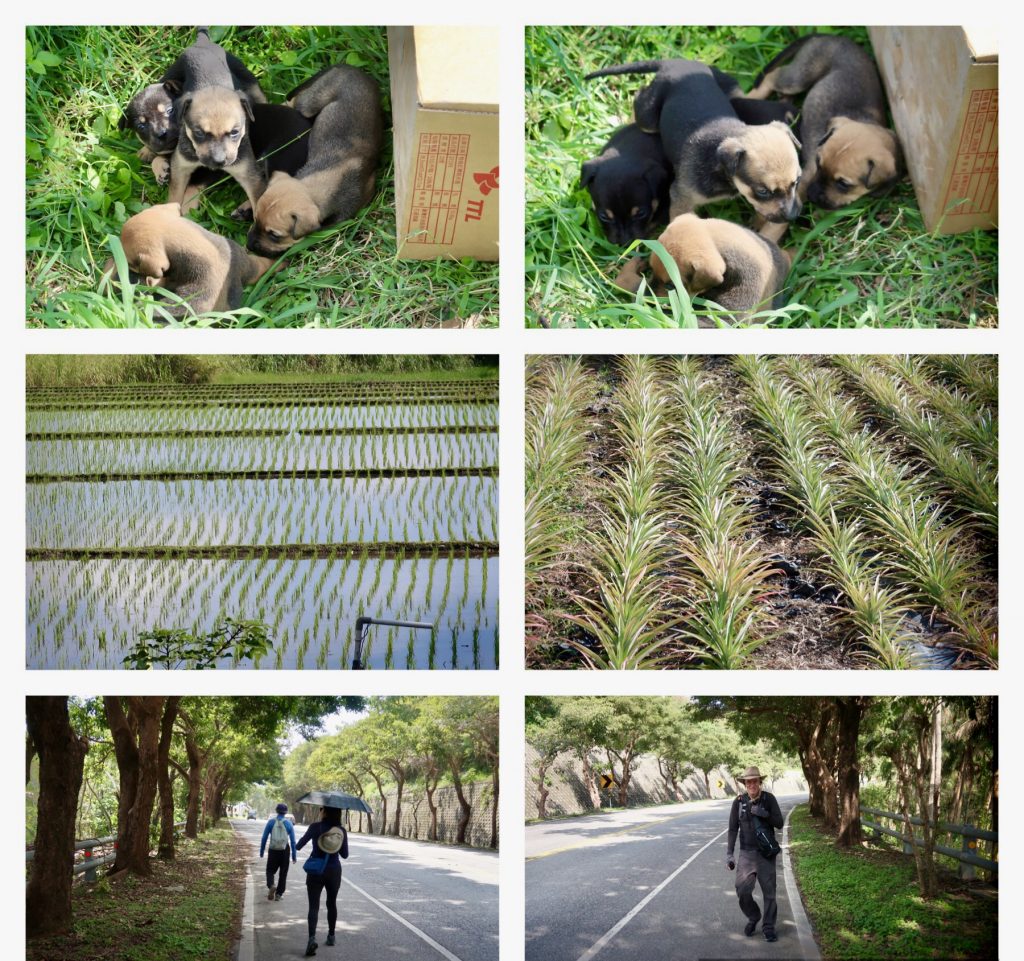 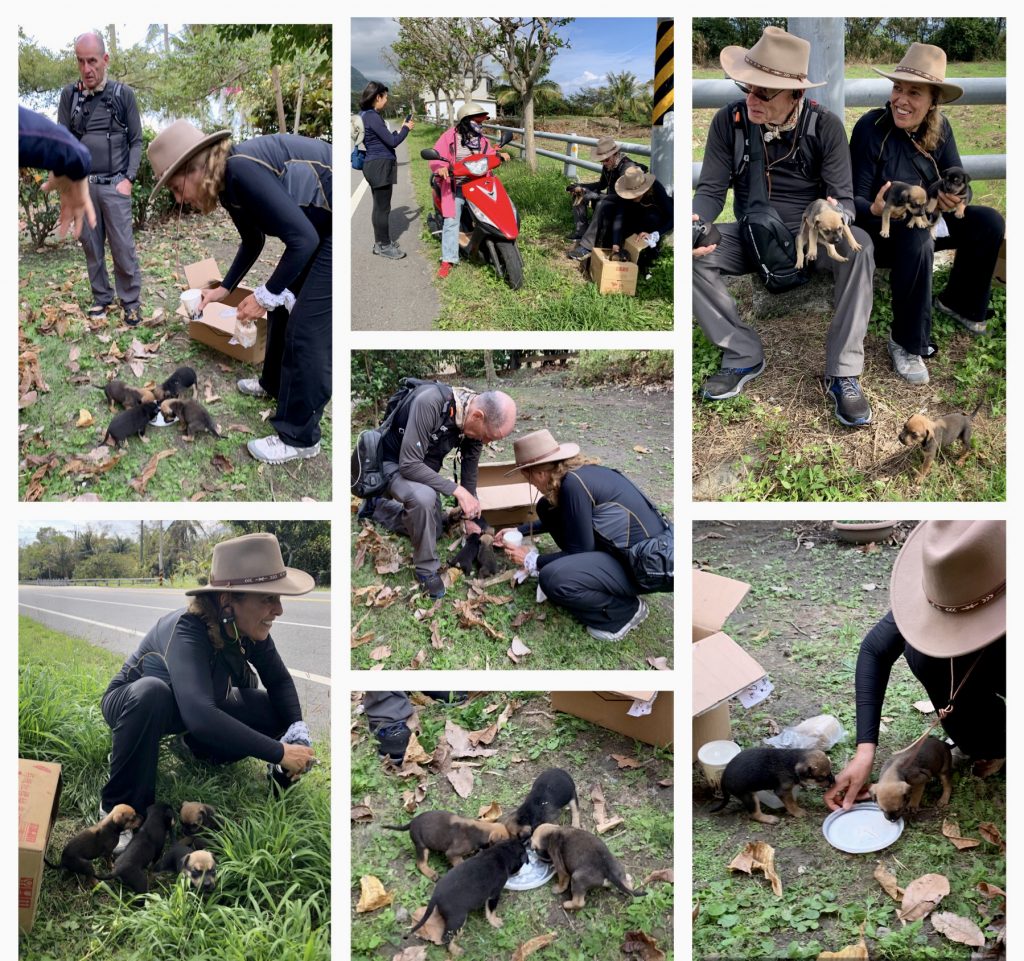 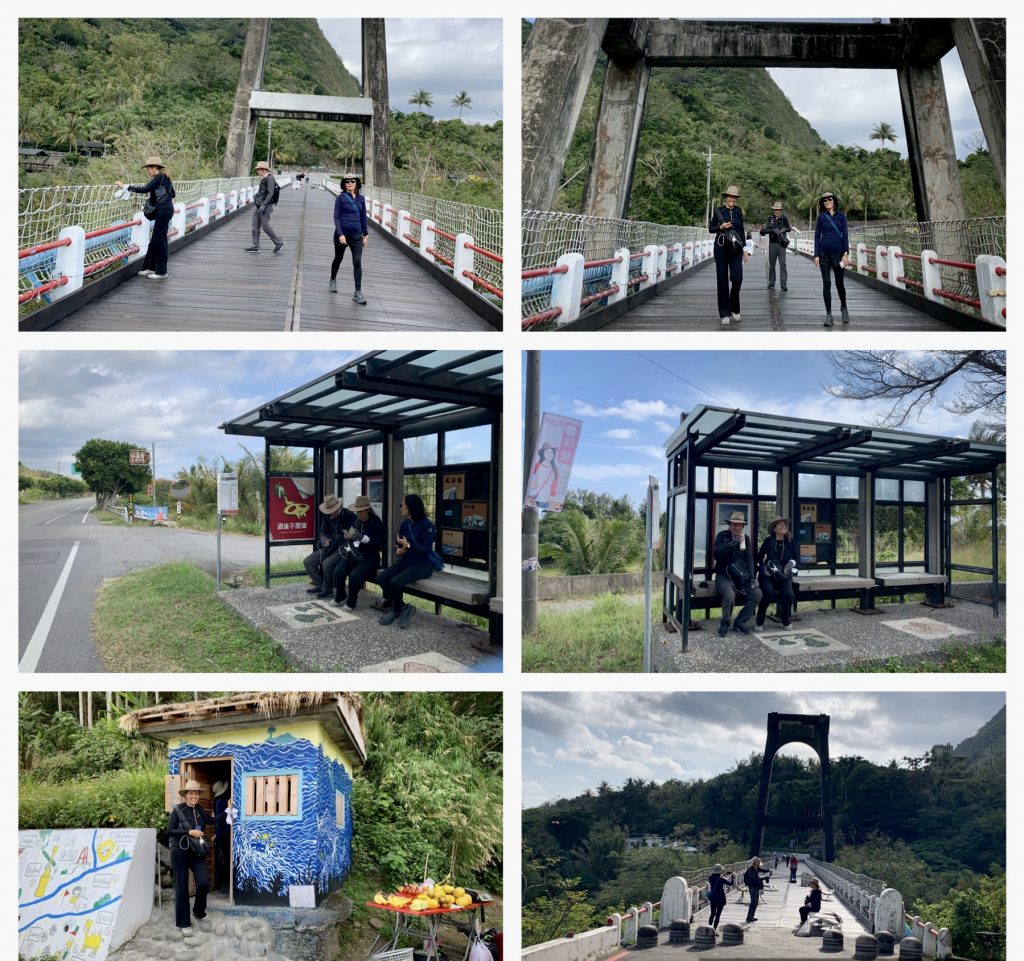 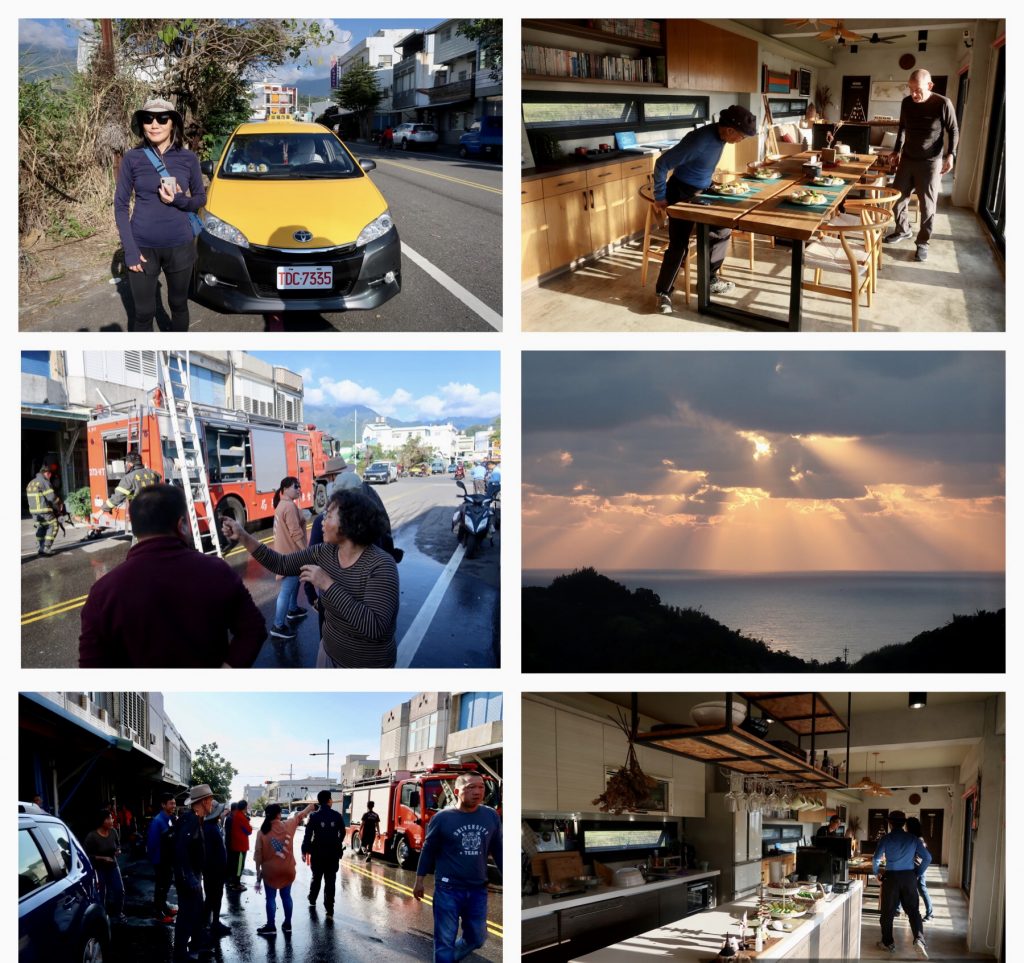 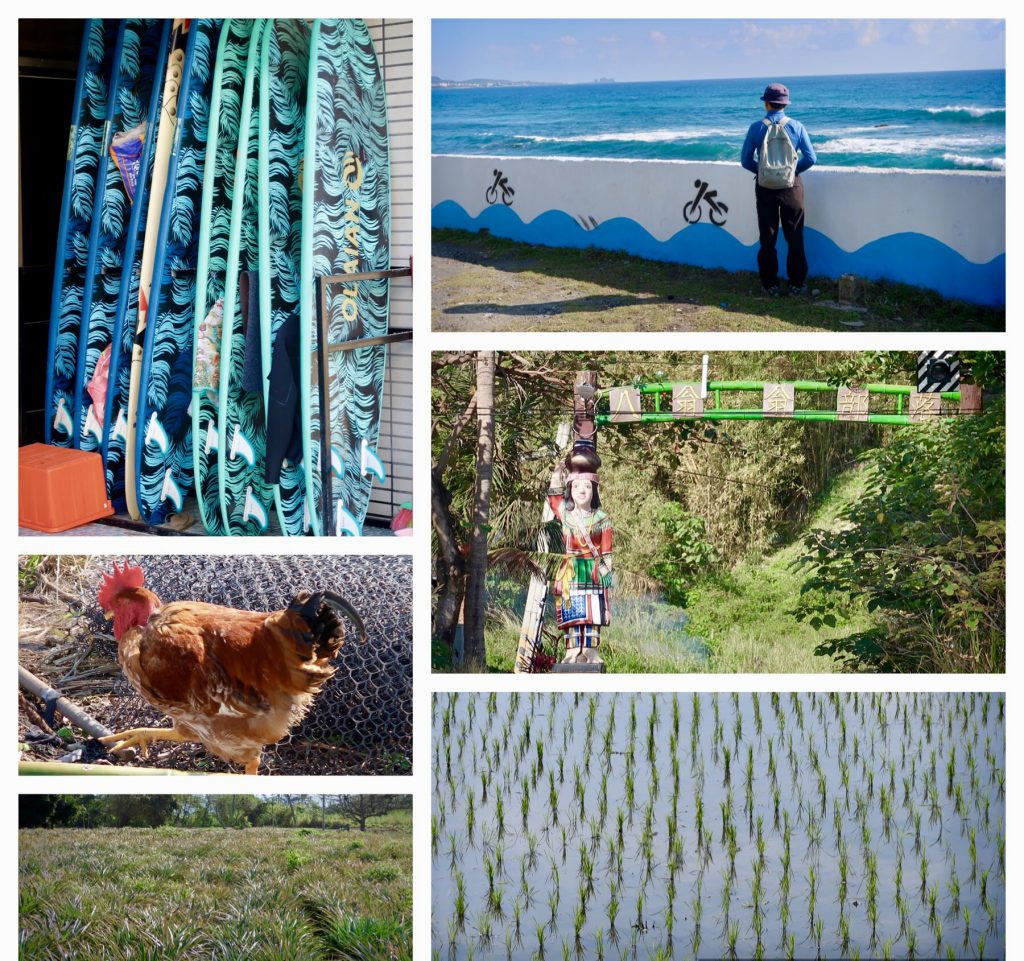 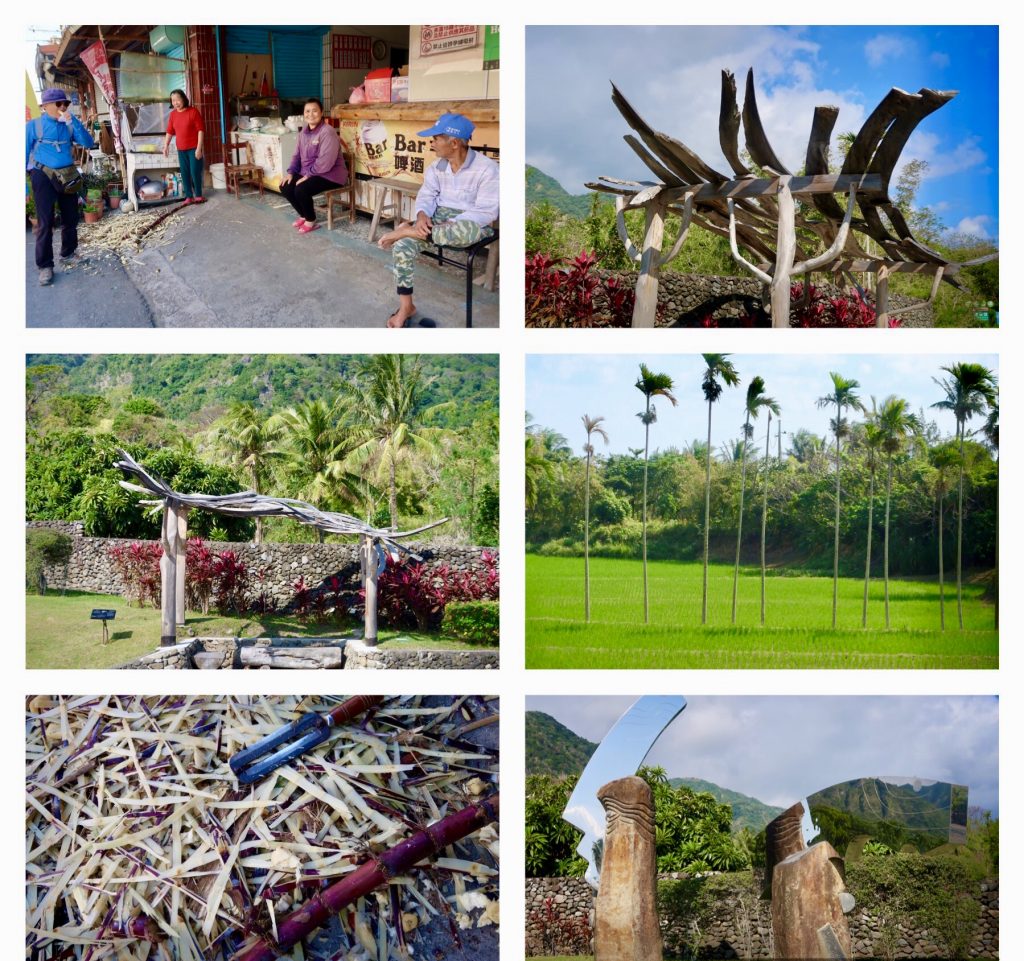 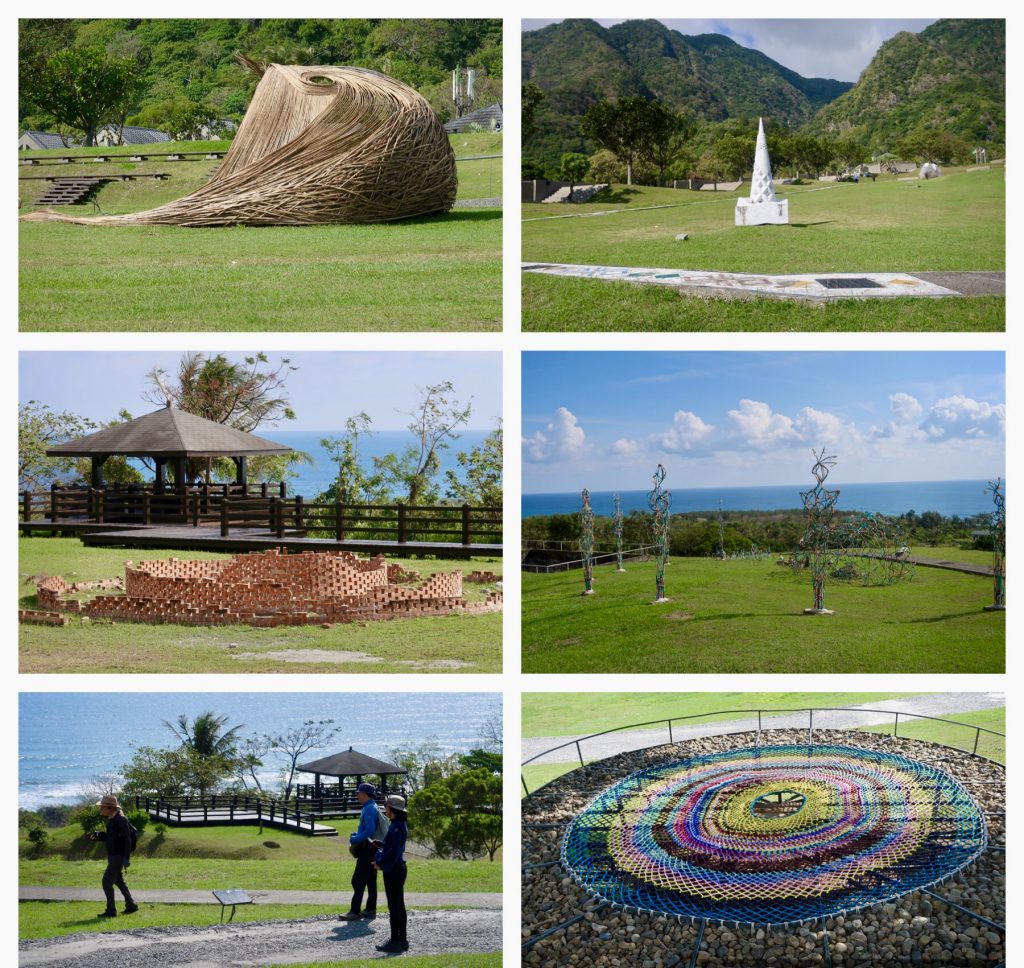 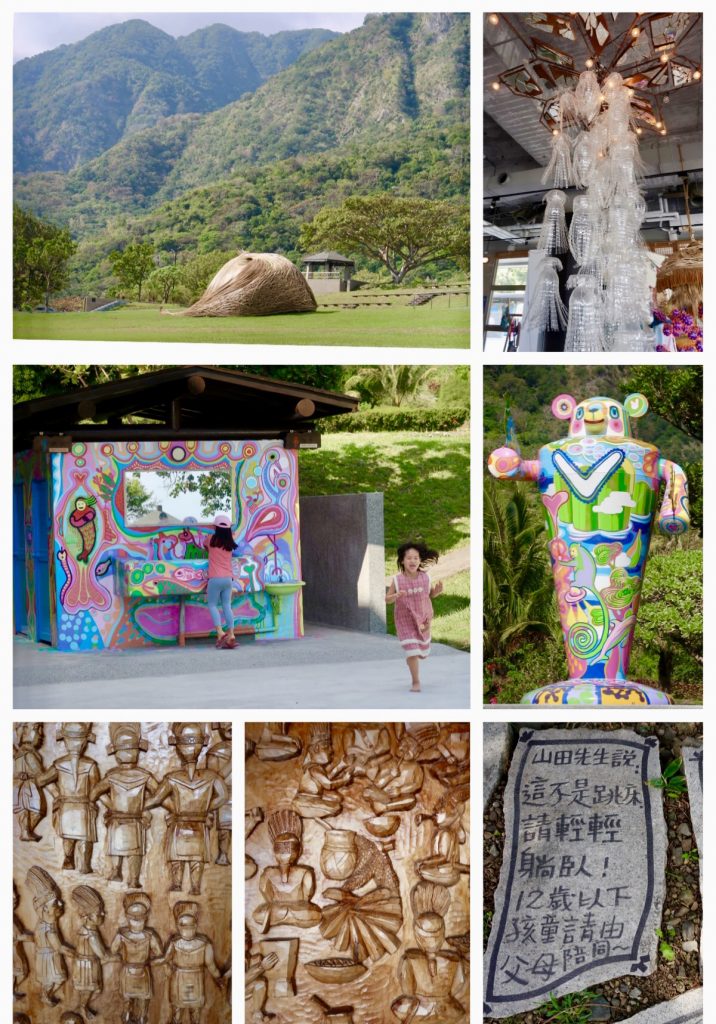 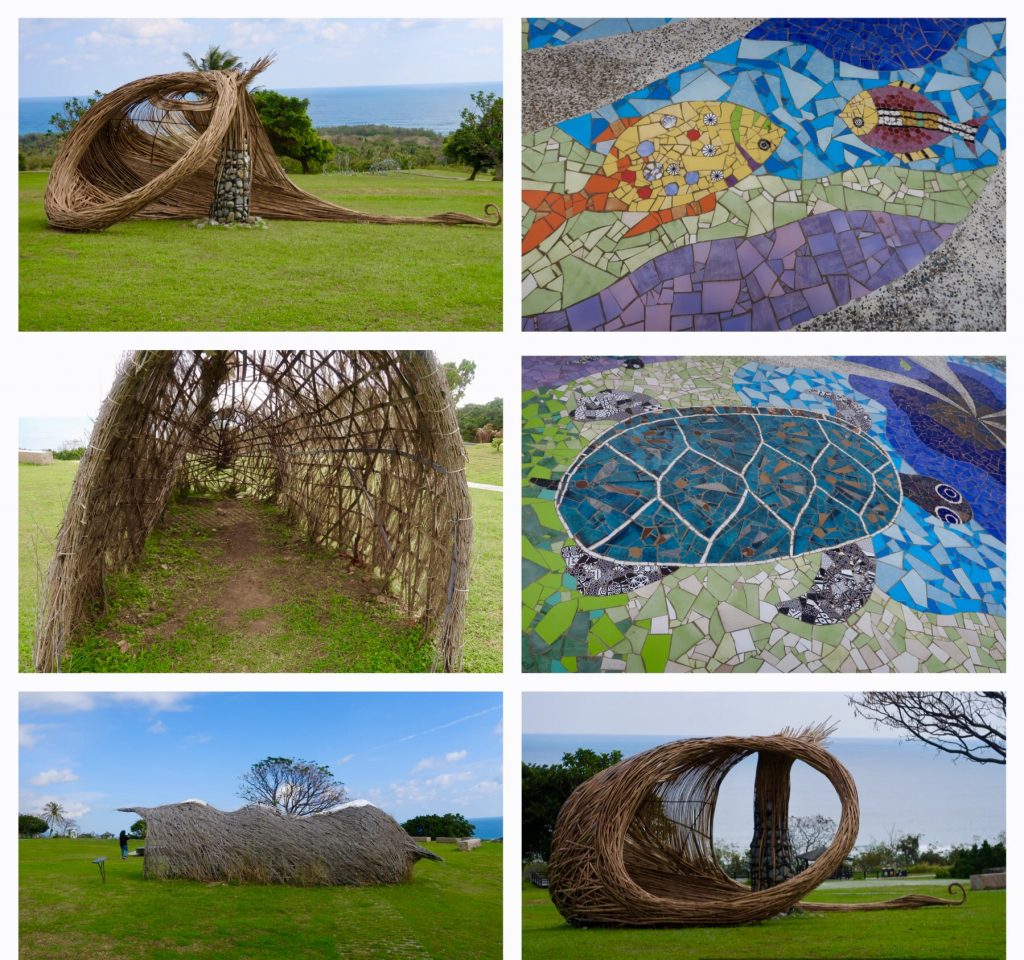 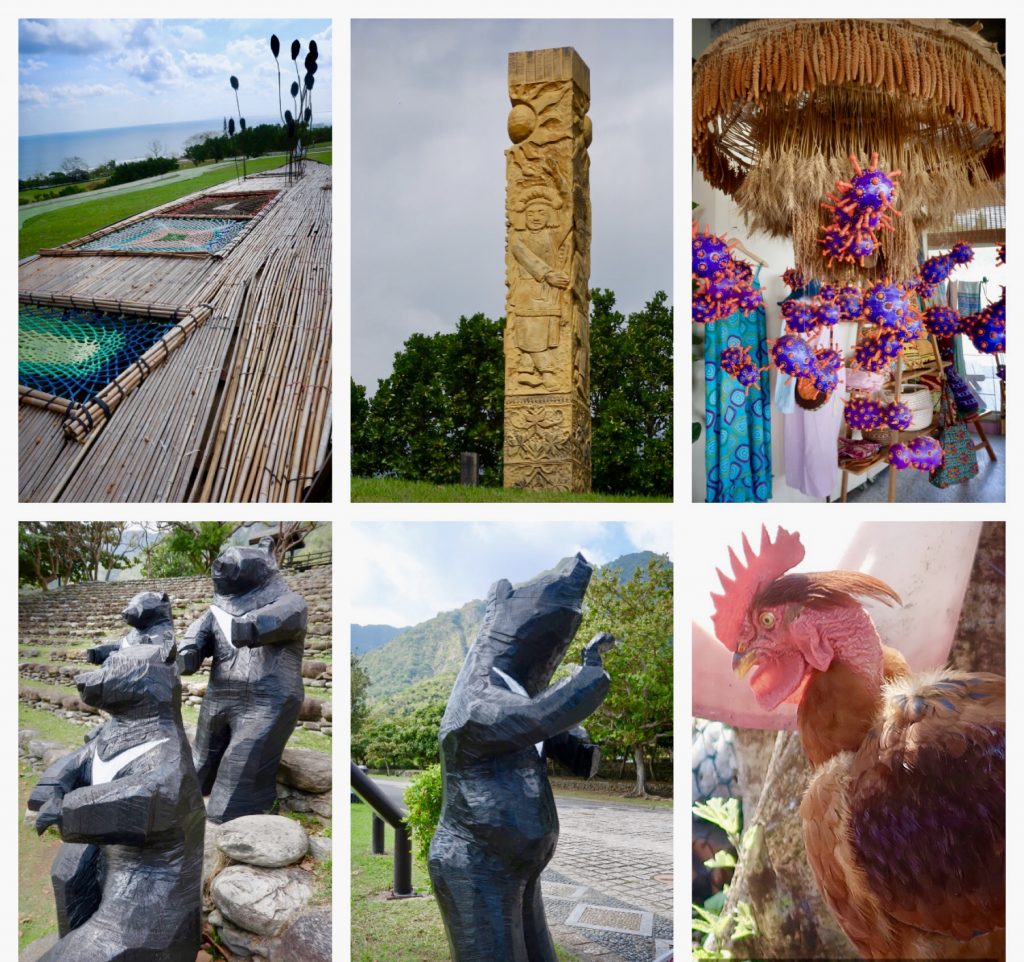 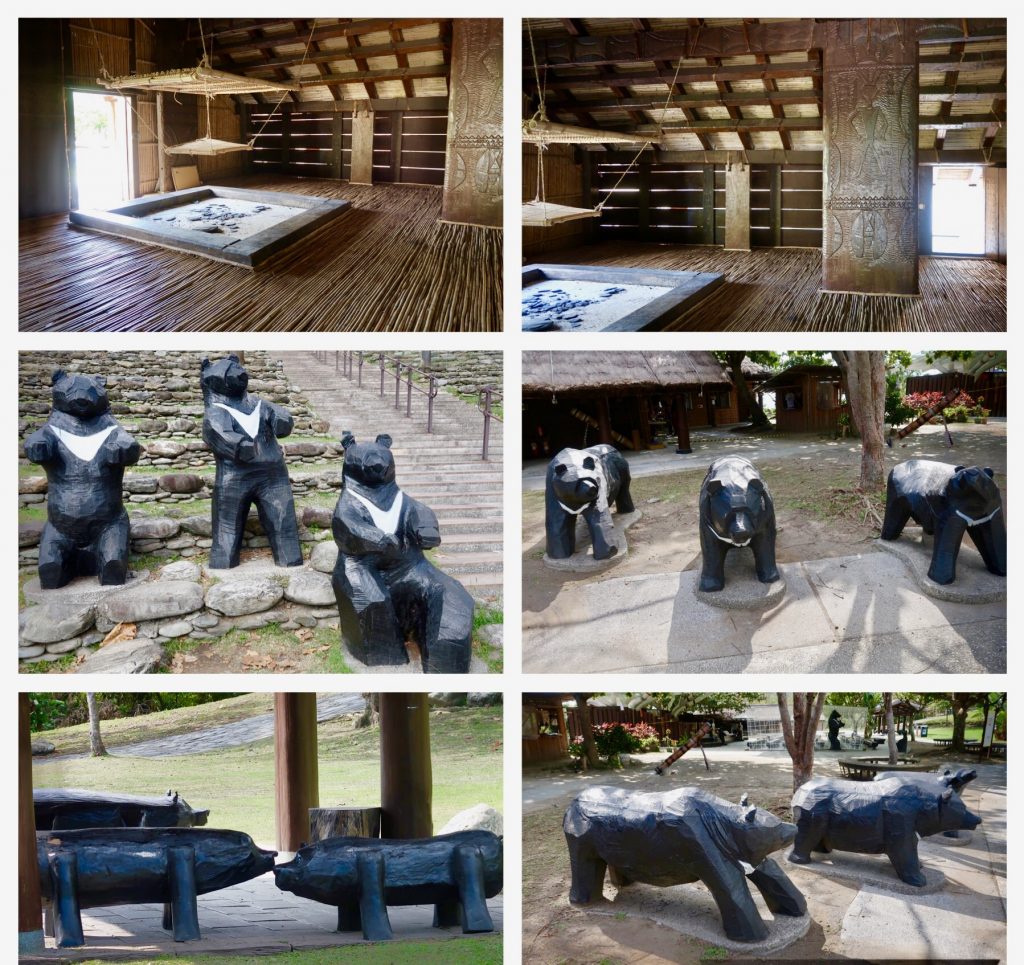 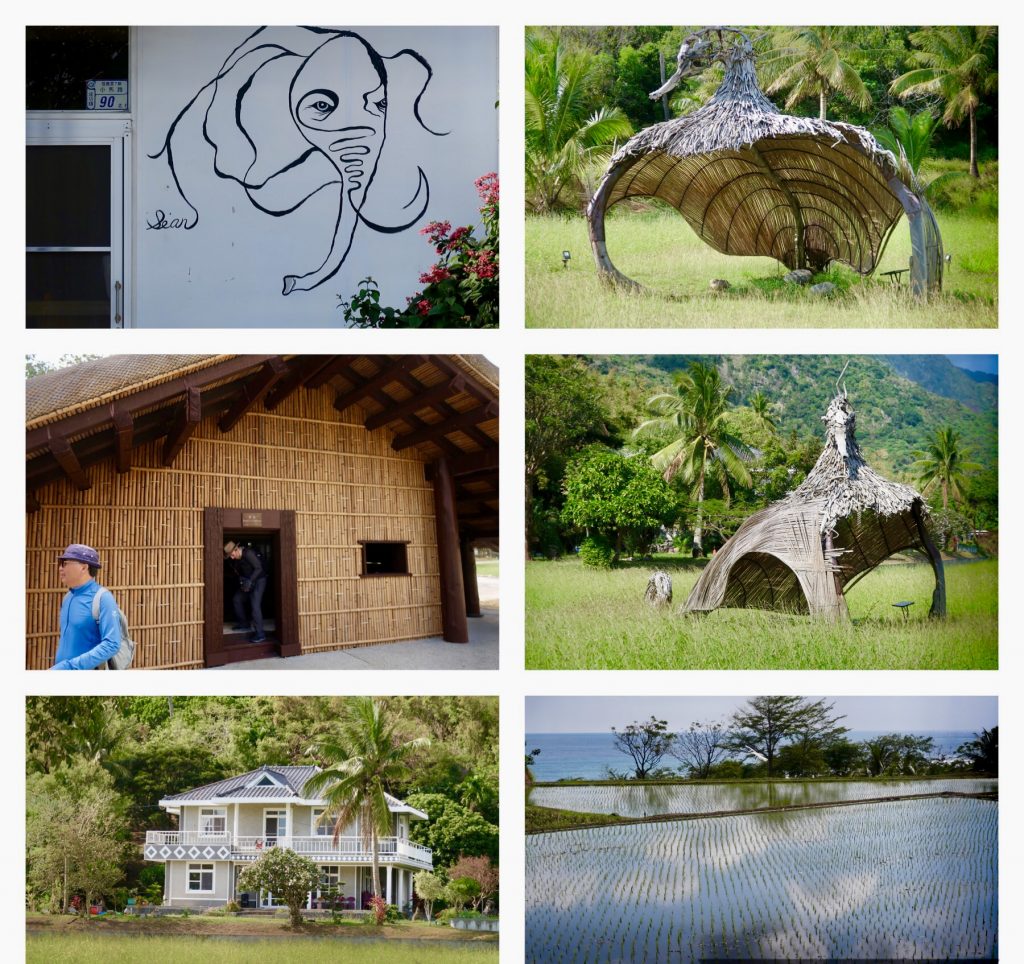 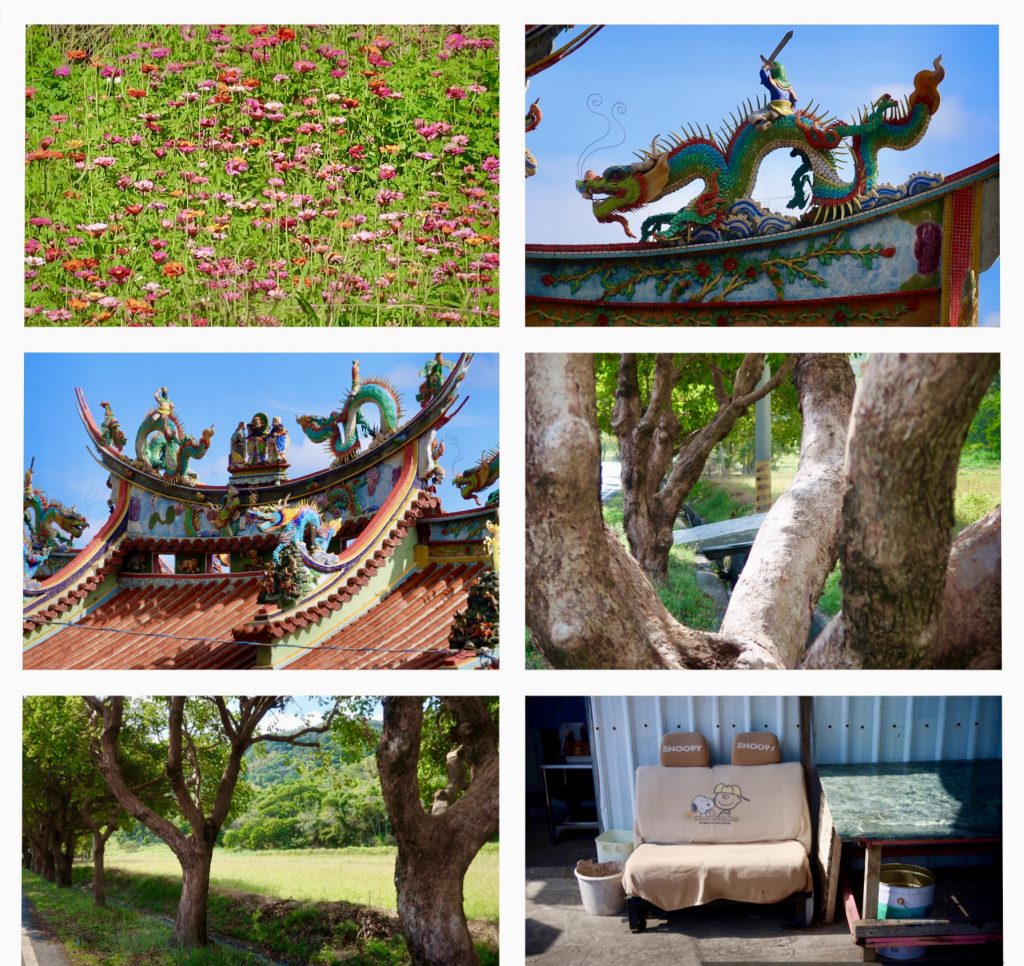 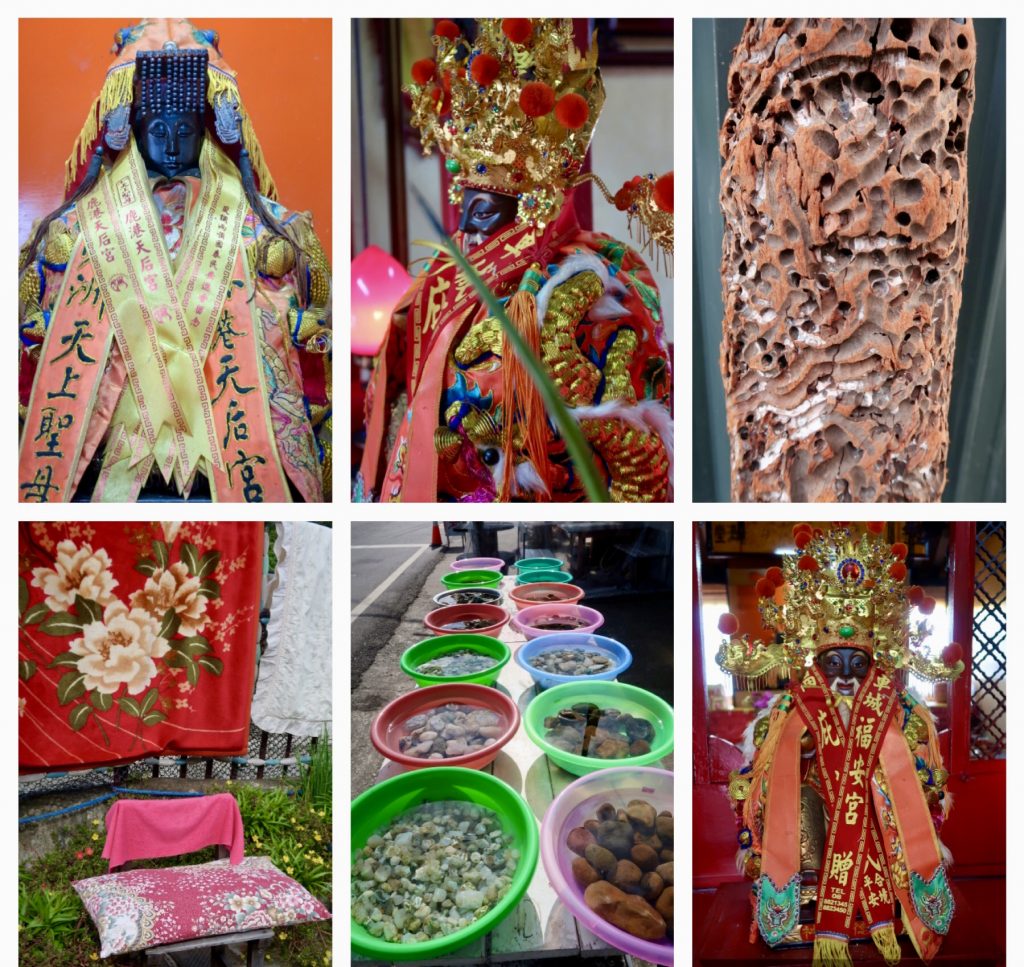 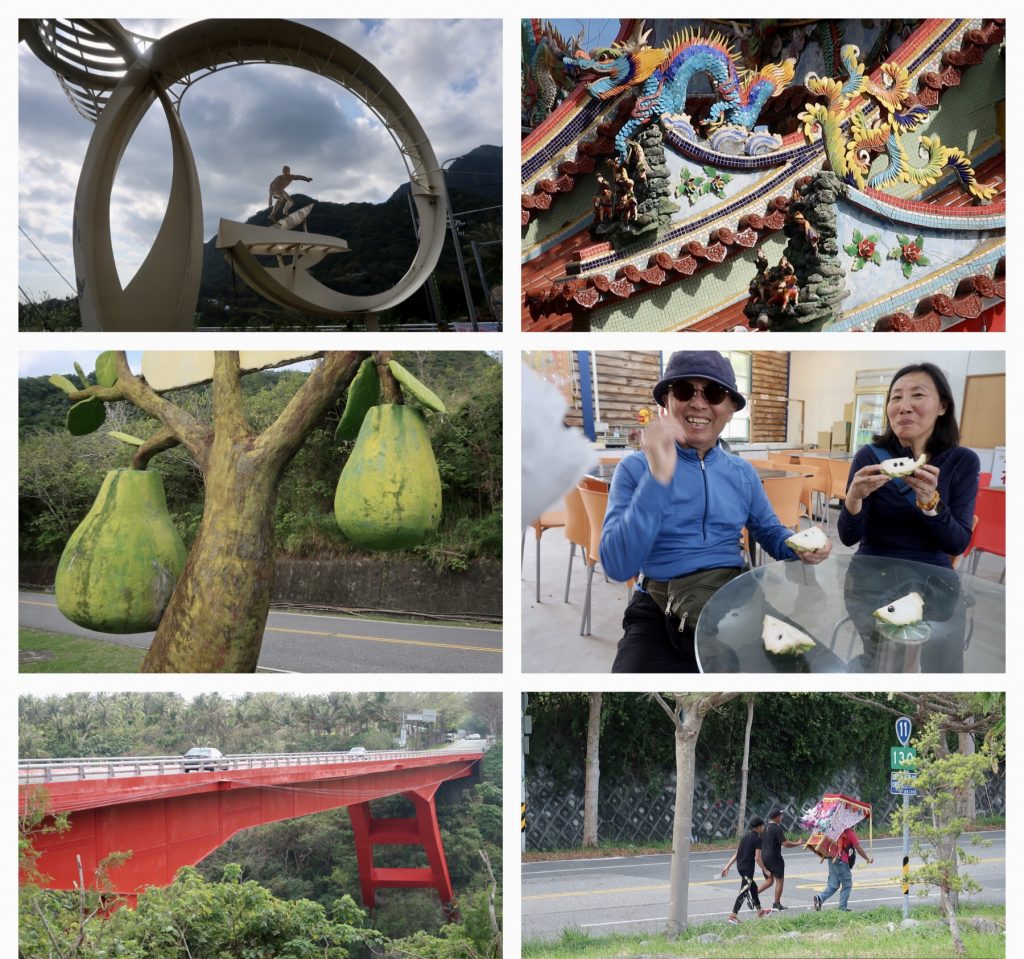 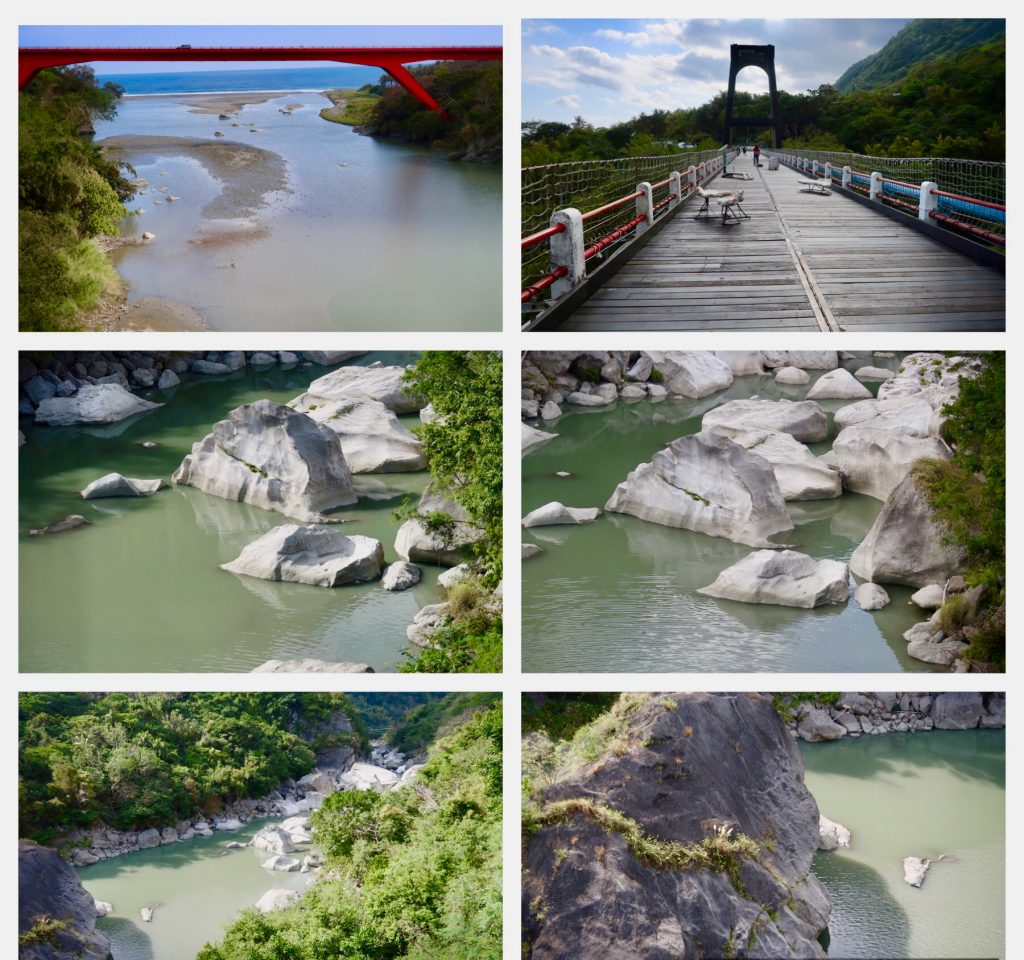 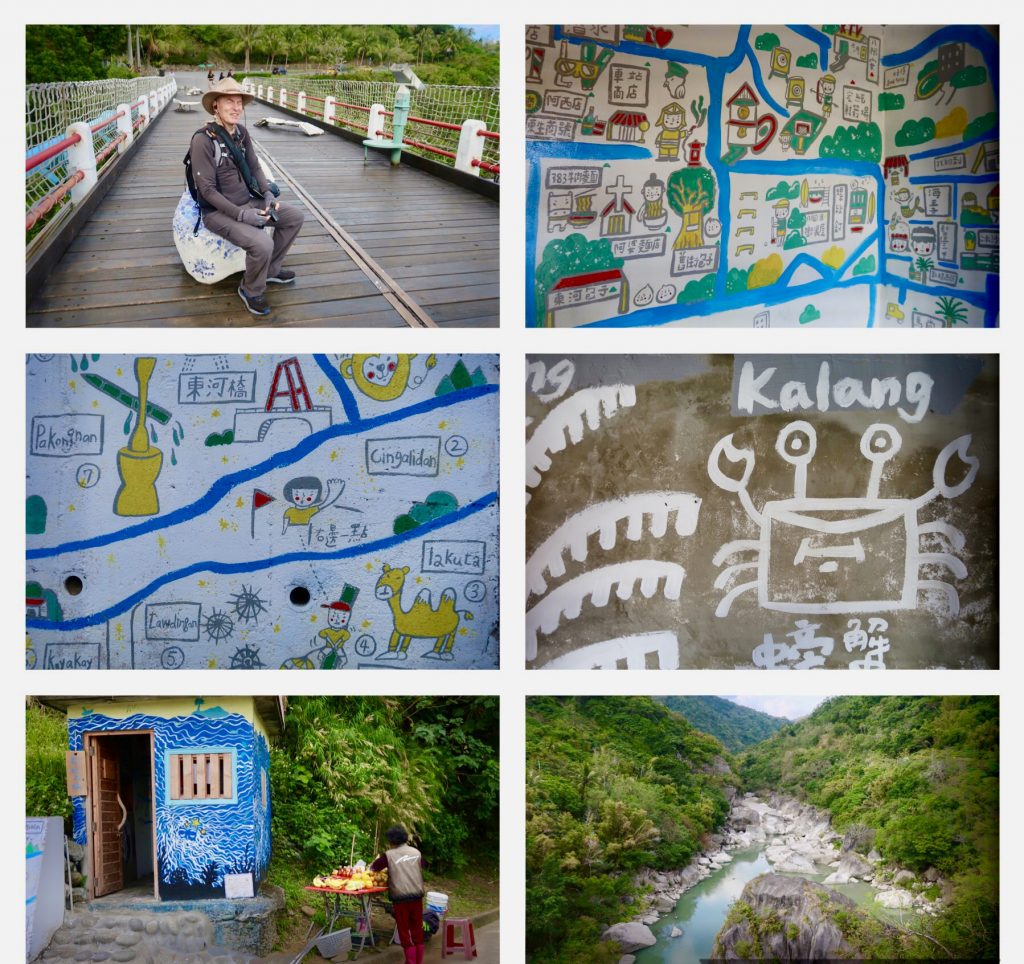 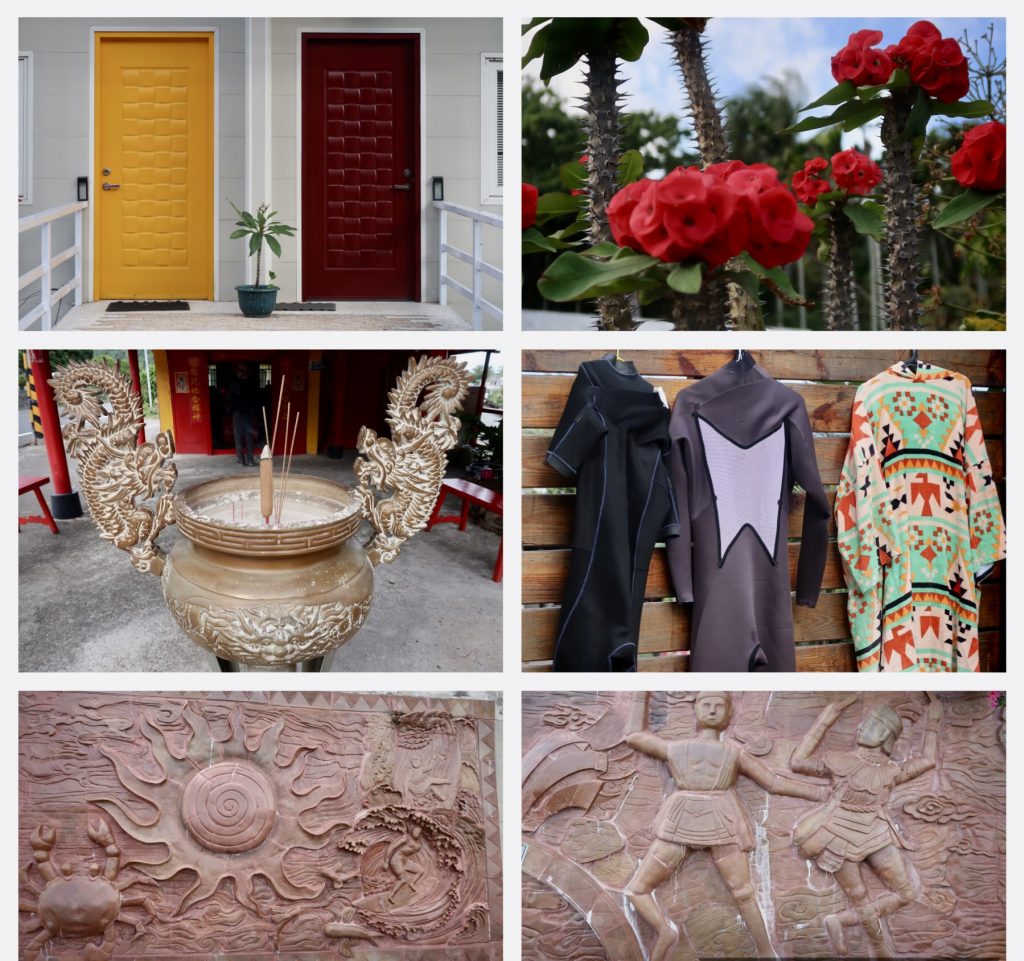 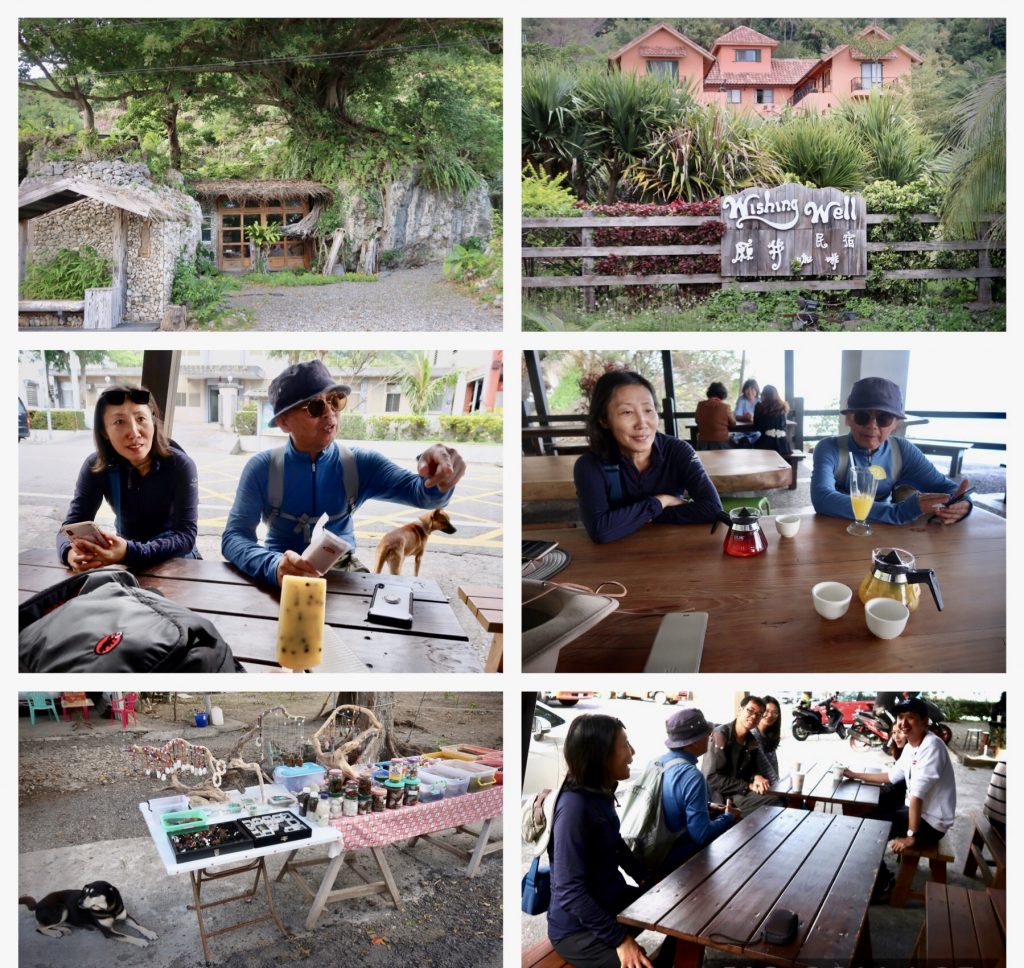 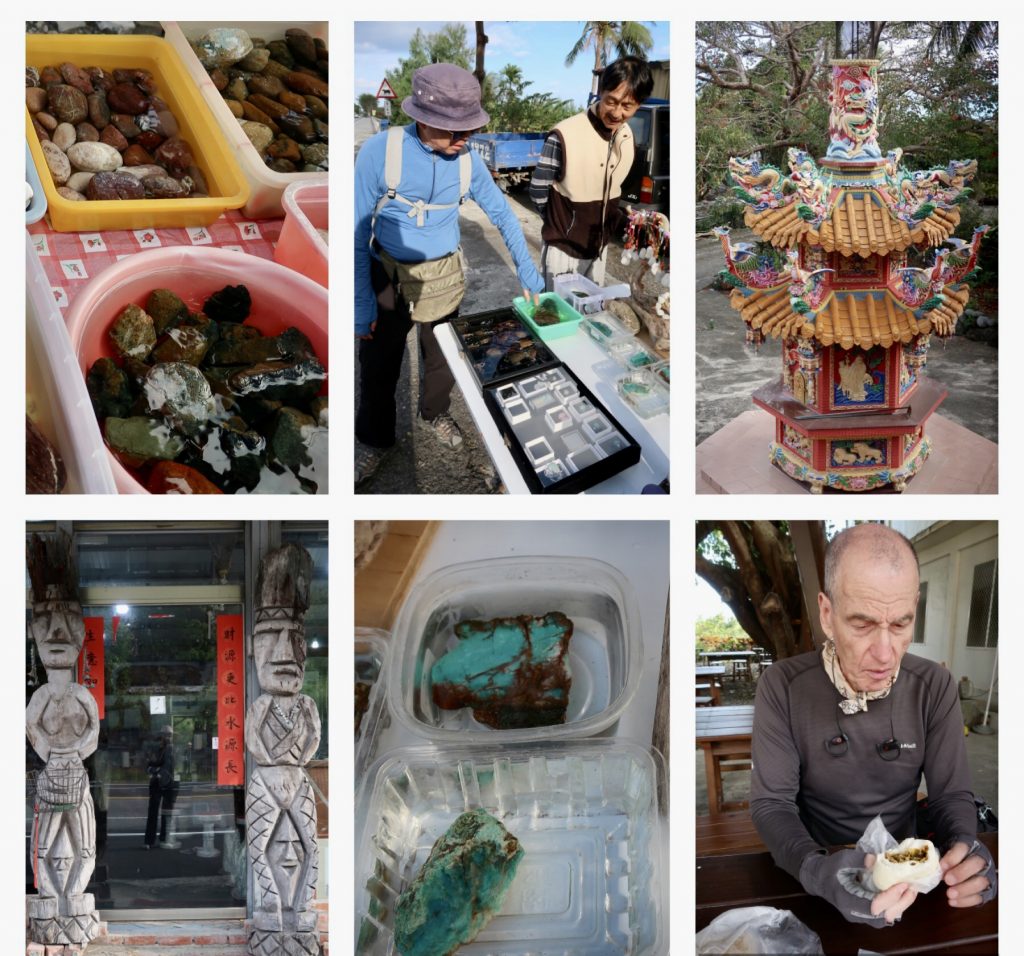 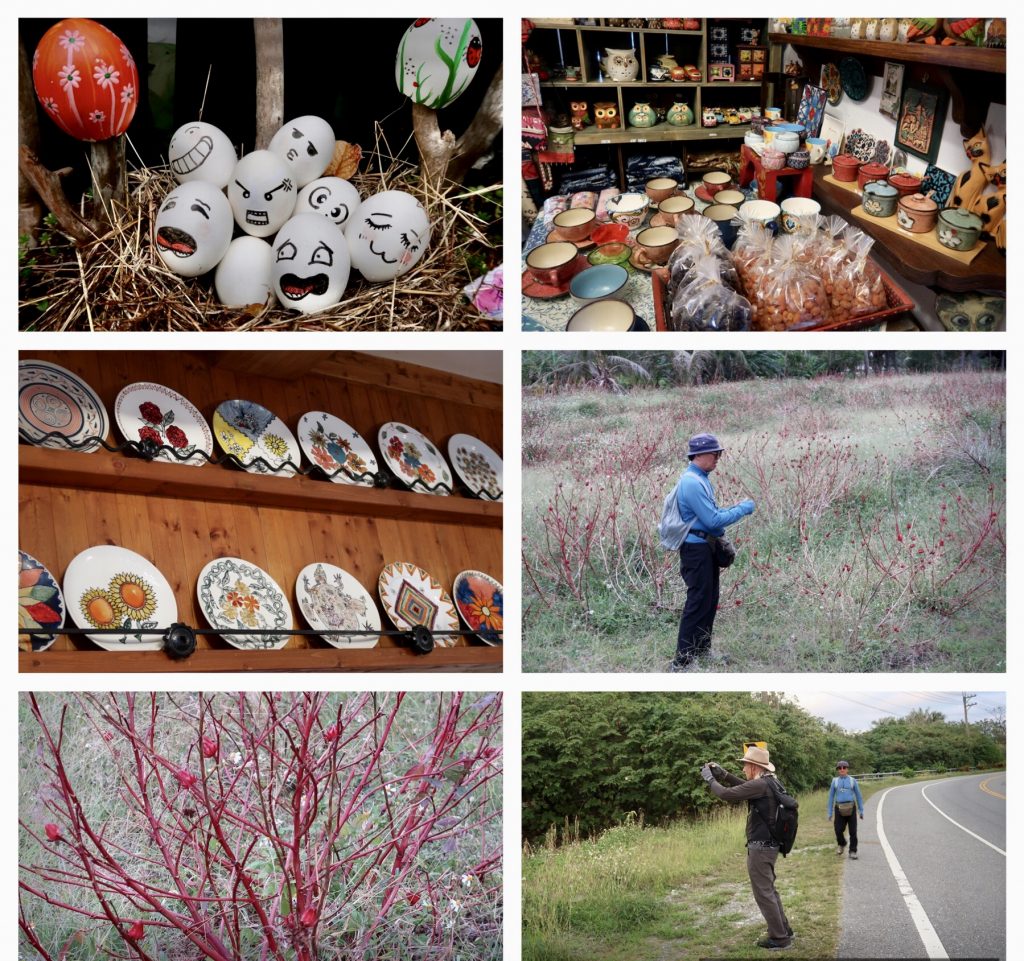 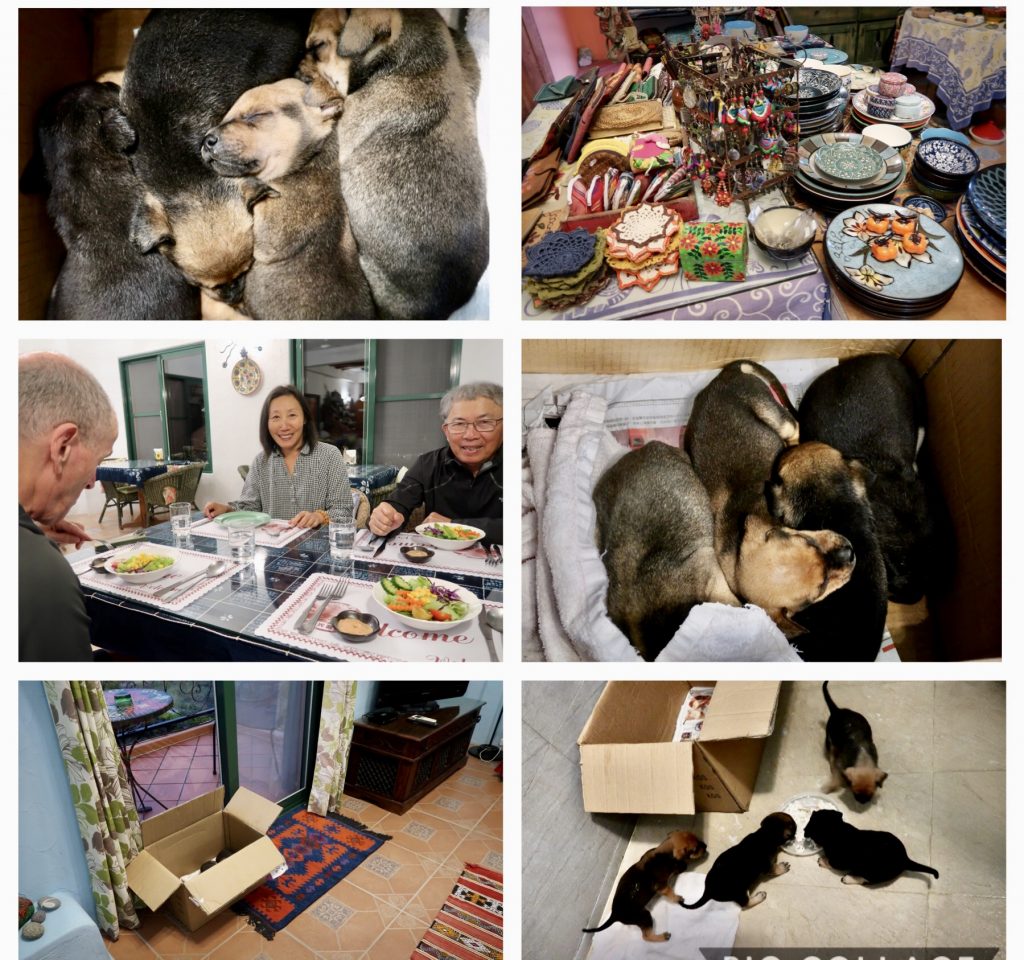 Taiwan Walk – Day 5 – Chenggong Township To Donghe Township, And How We Became The Guardians Of Four Abandoned Puppies

I wish I could describe to you how much I am enjoying this walk along the East Coast of Taiwan.
I do believe that if we were not walking with Joseph and Wendy, we would have had more difficulty communicating with locals, and things would not be as enjoyable.

Usually, as Jules and I walk pilgrimages or long distances, I feel pretty confident in our ability to communicate and get things done.
But today I realized that without having Wendy and Joseph with us, I would have been totally at a loss of how to help the four little puppies I found discarded by the roadside.

But allow me to start at the beginning.

After breakfast, we gathered with the guesthouse’s owners to take a few drone photos.
While Joseph navigated his new drone up in the air, the taxi driver’s wife arrived in her taxi to pick up our bags and to return us to the walking trail.

She waited patiently while we collected our bags.
Suddenly she got a phone call that seemed to greatly distress her.
It turned out that her apartment building was on fire, and that firemen were already there, fighting the fire.

We quickly hopped into her car and she drove as fast as a bat out of hell on the narrow twisty mountain road towards her house.
The nearby streets of the town were closed to traffic, and firemen were climbing to the second floor of the building wearing gas masks, with bottles full of air on their backs.

The neighborhood had gathered to watch.
It turned out that our taxi driver’s apartment was safe, as it was the apartment next door that was on fire because of an electrical failure.

While watching the firemen, we met a young man from Philadelphia.
He told us that he is a missionary, living in Taiwan and doing youth outreach.

Jules asked him if they are doing good deeds with the hope of converting people to Christianity.
He admitted that they believed in helping and doing good, but yes, they did hope that the locals would become Christians.

He asked us about our own religion.
I explained we were born Jewish, but that we believe in the Divine spark in each individual, as is thought in Buddhism.
We believe one must strive to become ONE with the Divine God within and that we are all one in Spirit.

I explained to him about the Course In Miracles, which he had never heard about.
I talked with him about how it teaches us self mastery, and how to guide and direct our beliefs and thoughts, from thoughts of limitations and fears, to thoughts of love and the unlimited Spiritual potential in each of us.

When the taxi driver was convinced that her apartment was safe, she drove us to the coastal road, and after we got out and thanked her, she drove with our backpacks to our next hotel.

We walked through the Torik tribal village and climbed up to visit the Amis tribal Folk Village, that had recreated the old houses of the tribe.
The park has some lovely outdoor art installations and a nice cafe where we rested and had some homemade dragon fruit sorbet.

The old houses look much like the houses in the Polynesian islands.
They were constructed of native wood with thatched roofs, one big open space with carved columns, and a fire pit.

After our rest, we continued walking.
People were selling colorful rocks and stones at roadside stands.
They submerged the stones in water so their colors would shine.

When we walk, we see every little thing.
We see discarded trash by the side of the road, the things on the table inside houses from the kitchen window, what people keep in their cars, what they eat or drink or how they sleep on their porches.

As we walked by a narrow grassy patch by the road, I saw a turned over cardboard box and four little puppies huddled together in the hot sun.
They were extremely dehydrated and hungry, and started whimpering and crying as I held them.

Jules, who was walking behind me, was carrying our thermos of hot water, but we had no food or snacks with us.
When Jules arrived, the water in our thermos was too hot to give to the puppies.
I poured it into my cupped hand and it burnt my hand.

I moved the puppies to the shade and soon Wendy and Joseph arrived.
We got some water from Wendy’s thermos, which was only lukewarm.
The puppies were very thirsty.

We talked about what we could do to help the puppies.
Wendy and Joseph suggested that we send them ahead to our guesthouse, and that they would call ahead and ask them to care for them until we arrive.

Wendy called the guesthouse and told them that we had found four abandoned puppies by the road, and that they would be coming soon, while we would arrive in the late afternoon by foot.

We saw that a fifth puppy was dead by the side of the busy road.
He must have wandered away looking for food or water.

We continued walking, but now we had a new mission, to figure out what to do with four little puppies.
Wendy started to make phone calls as we walked.

Her daughters suggested she call the local animal shelter, which she did.
The animal shelters in Taiwan no longer kill unwanted pets.
They try to get them adopted or they keep them.

The animal shelter told Wendy that they do not accept newly born puppies.
They cannot take care of young puppies who needs constant care and feeding.
They only take dogs that are three months or older.

My heart was heavy and as we walked. Joseph apologized to me, saying, “We are very bad people sometimes.”

I said, “What do you mean, I think you and Wendy are great and kind people, always trying to help others.
Here you just spent time and money trying to help these puppies.”

He said, “When I said “I,” I meant Taiwanese people. We should not have abandoned these puppies by the side of the road. It is a very cruel thing to do.”

Our walk took us to the old Donghe Bridge.
Right before crossing it, we stopped to use the toilet in a cafe, and bought some fruit to eat.
The fruit is called “Buddha’s Head,” and it is a very delicious Custard Apple.

The Donghe old bridge stretched over a wide river that flows to the Pacific Ocean.
It is no longer a car road, and below us we could see huge white boulders bleached by the sun.

Across the river there were a few cool cafes playing nice music, some surfing schools and guesthouses, and a few popular eateries.
We stopped at one of the eateries to eat a lunch of steamed buns filled with bamboo shoots, mixed vegetables, and crispy scallion crepes.

They also sold handmade ice cream, and we bought a pineapple and a passion fruit one.
While eating our lunch on benches under the tree, we started chatting with the table sitting next to us.
I suggested to Wendy to ask them if any of them might want to adopt a puppy or two…

They did not, but they suggested more animal shelters that might help us.
Wendy continued to make phone calls all afternoon to try to figure out what to do.
The biggest problem was that it was the weekend, and the animal shelters were all closed.

After a nice walk through the very cool Donghe surfing village, we arrived near our guesthouse.
We stopped in a cafe to drink some fruit and herbal teas, and I wanted to buy some milk to feed the puppies.

I had already bought them some plain steamed buns, which i planned to cut into small pieces and soak in milk.

The cafe offered a hot Roselle tea, made of red flowers that grow in the area.
The flowers make a burgundy-red tea, which is very delicious.

They sold us some milk and we walked to the guesthouse.
Before even checking into our rooms, we asked to look at the puppies.
They had fortunately replaced their box, which was soaked in pee, and refilled the plate of water the puppies had turned over.

We put them on the ground and fed them the soft bun soaked in milk.
They ate like they were starving and unsure if they would ever eat again.

The owner of the guesthouse agreed to let us keep the puppies on the balcony of our room.
But it was a cold evening and the balcony on the second floor was high, and I was not willing to risk the puppies falling through the railing.

Instead, after we took showers, I dried up the shower room and put them in our shower.
I played with them, hugged and cuddled them, and gave them a big bowl of milk and soaked soft bread.

I lined their box with an old towel that the owner gave me, and put the box on its side.
Soon the puppies were asleep, all huddled together inside their box in the warm shower room.

The owner of the guesthouse had traveled in South America, which led her to create this Spanish inspired guesthouse on the East Coast of Taiwan.
She also sells plates with Spanish patterns, scarves, bags and souvenirs.

The food we were served for dinner was a Mexican tortilla filled with vegetables, a vegetable pasta, salads, soup and dessert.

That night I woke up twice to feed the puppies.
I tried to keep their room dark so they would sleep, and in the morning they were joyful and hungry again.

The story of the rescue of the puppies will continue tomorrow.

With love and blessings,
Tali