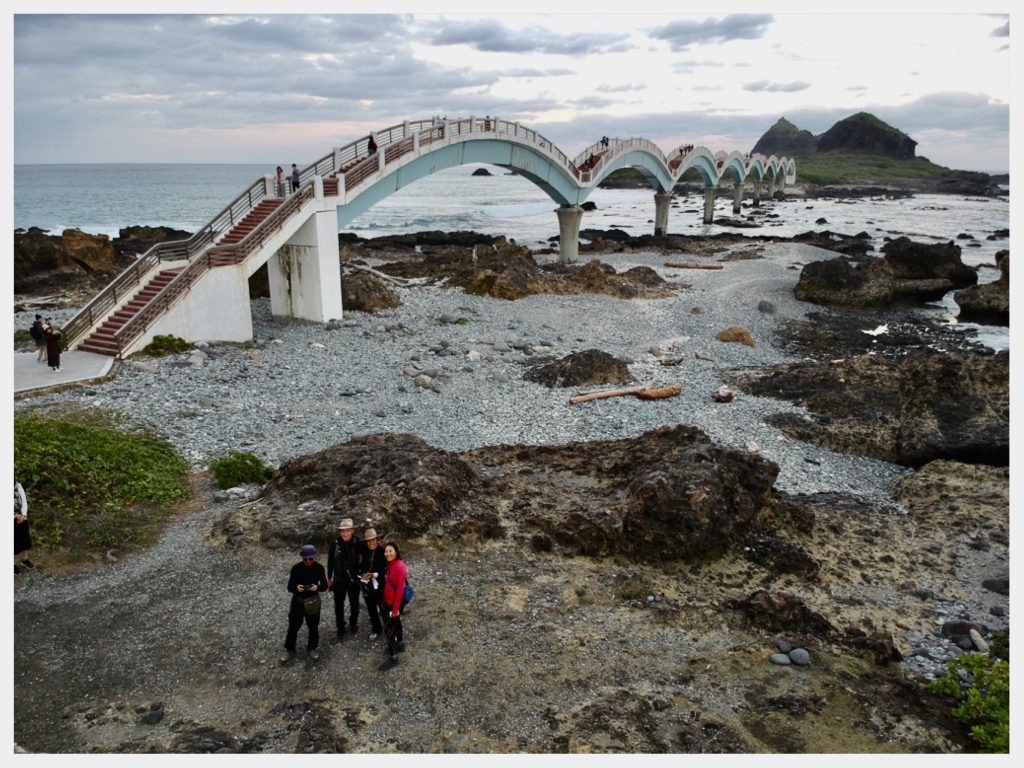 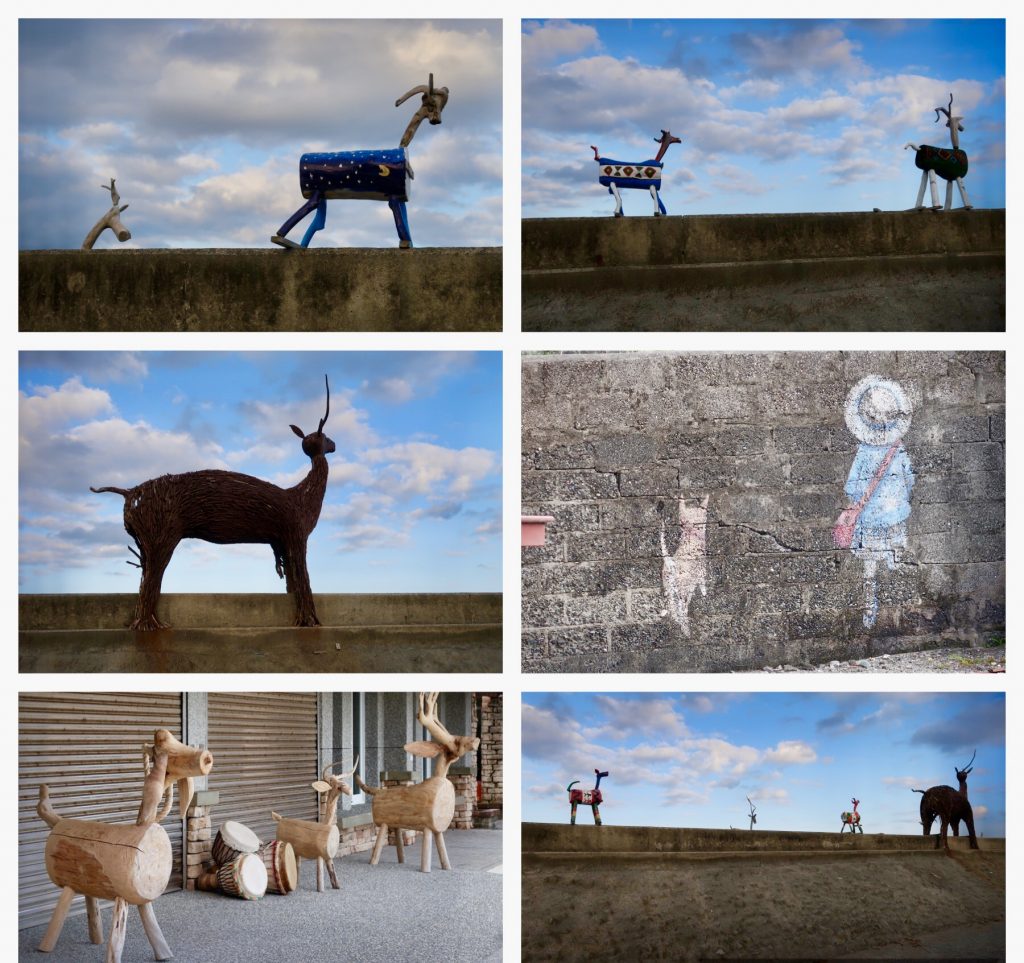 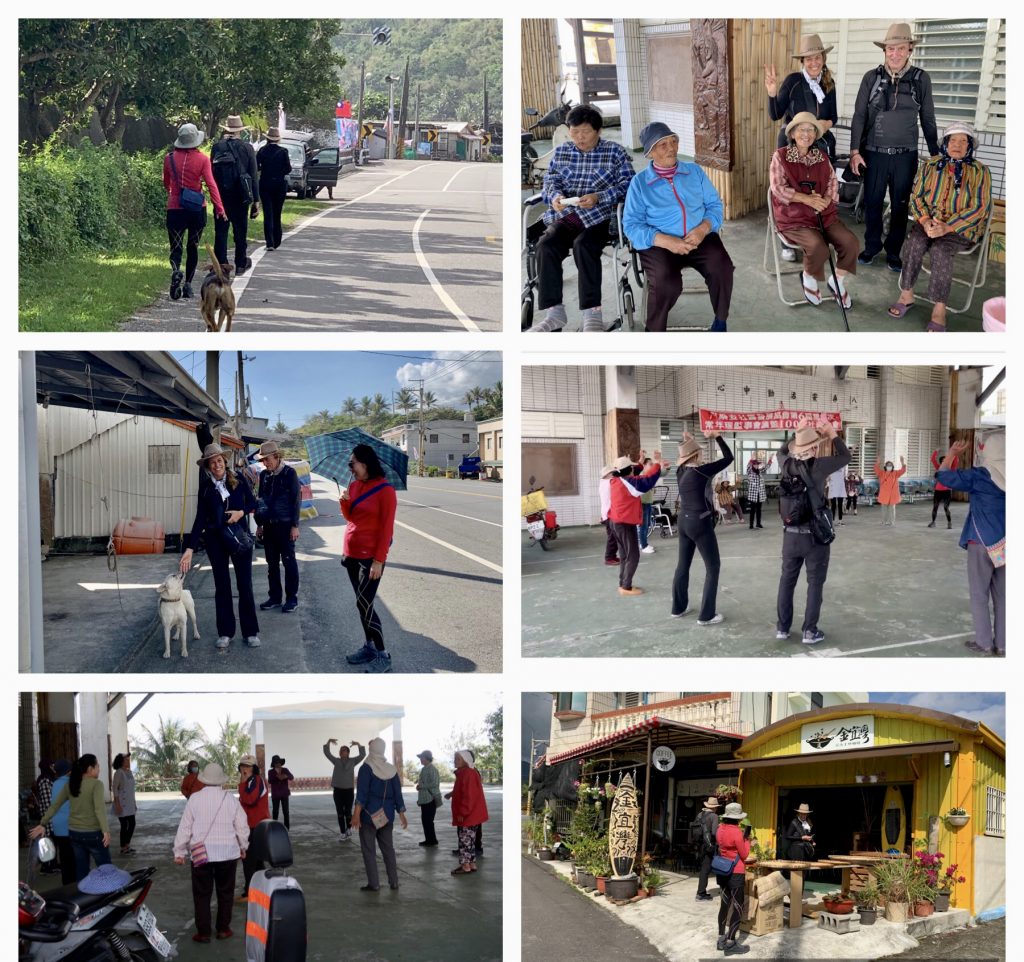 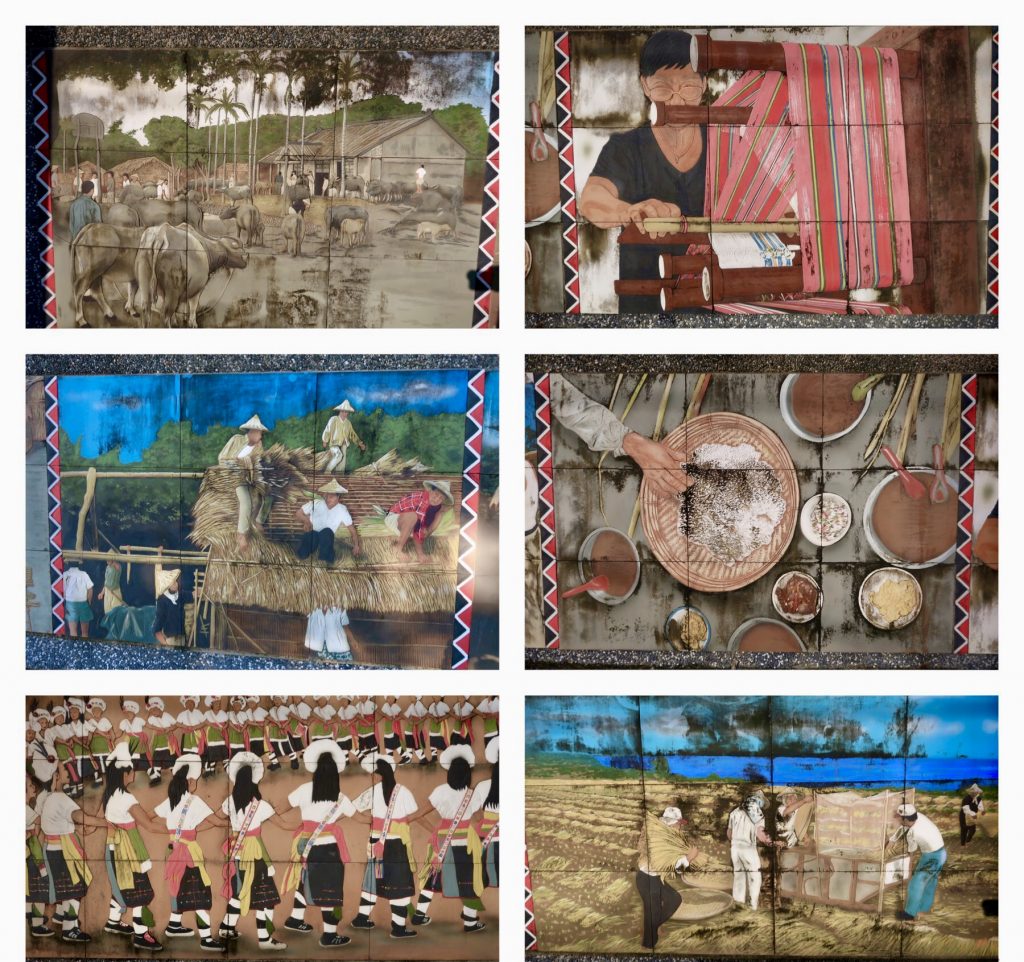 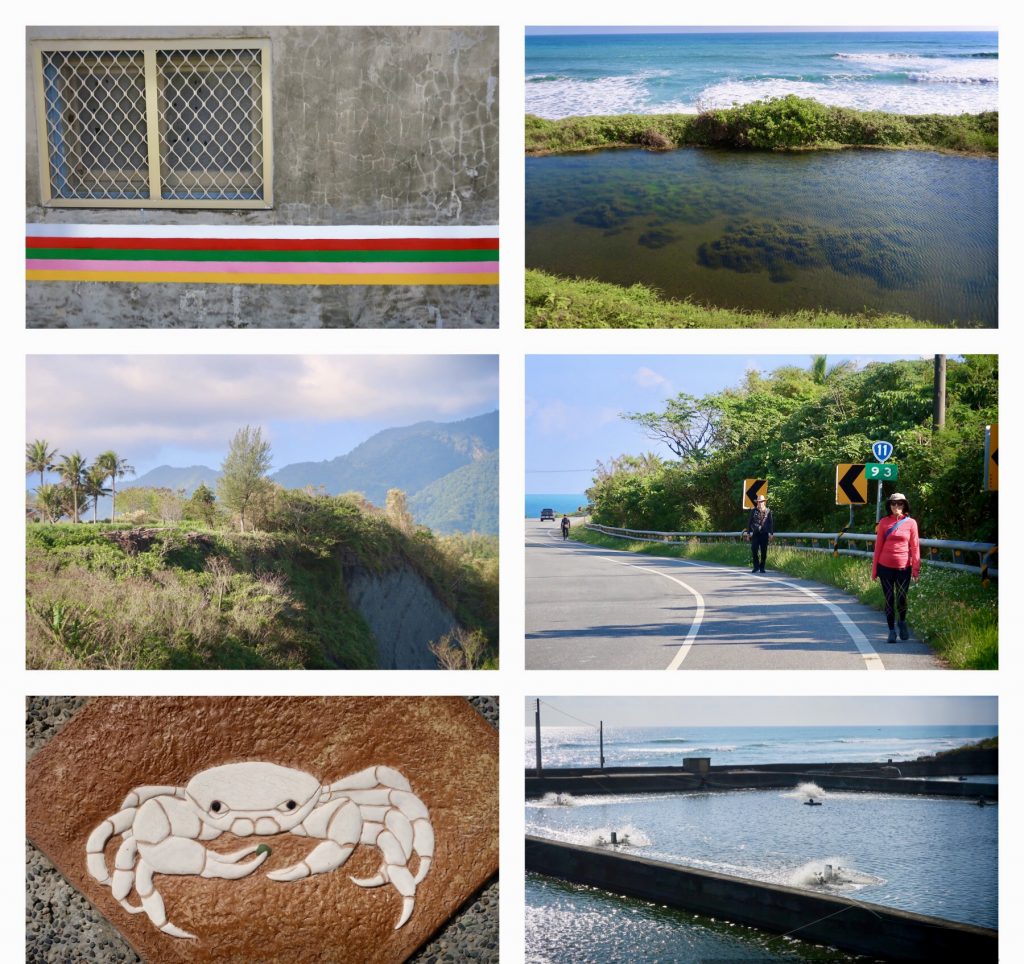 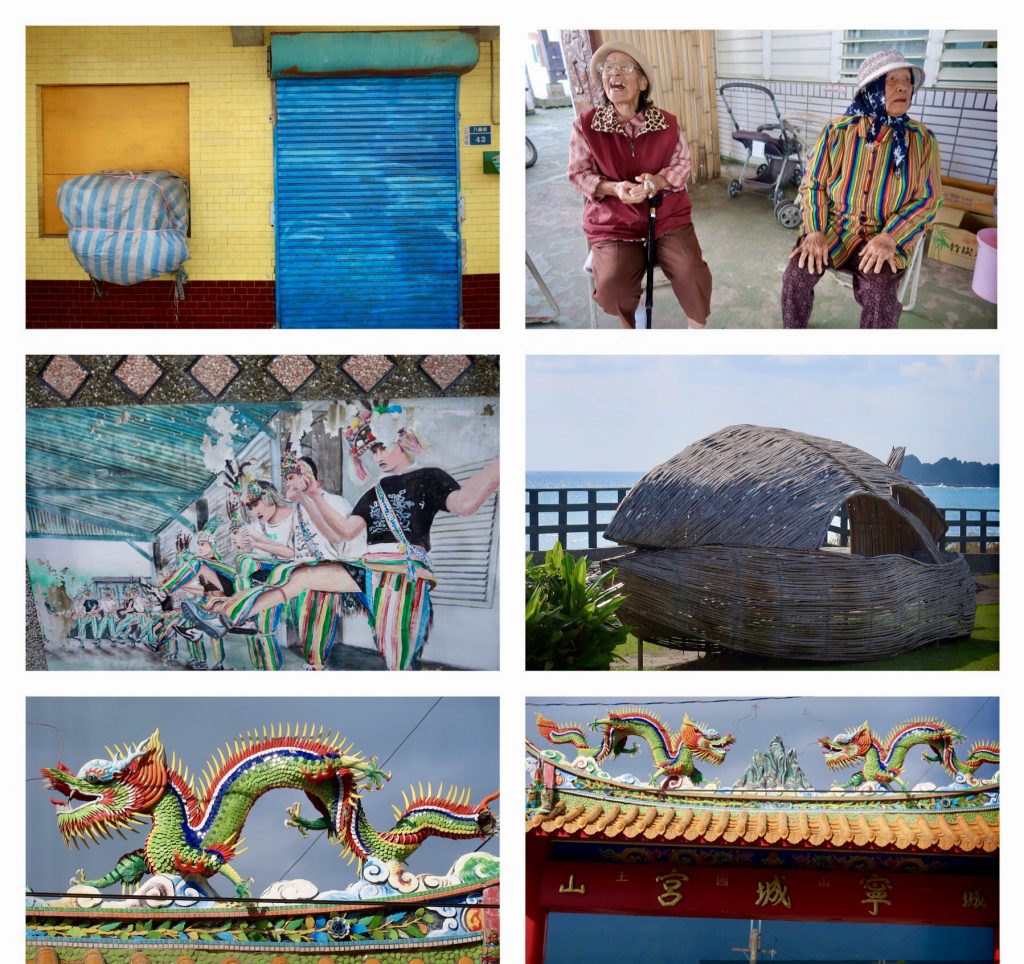 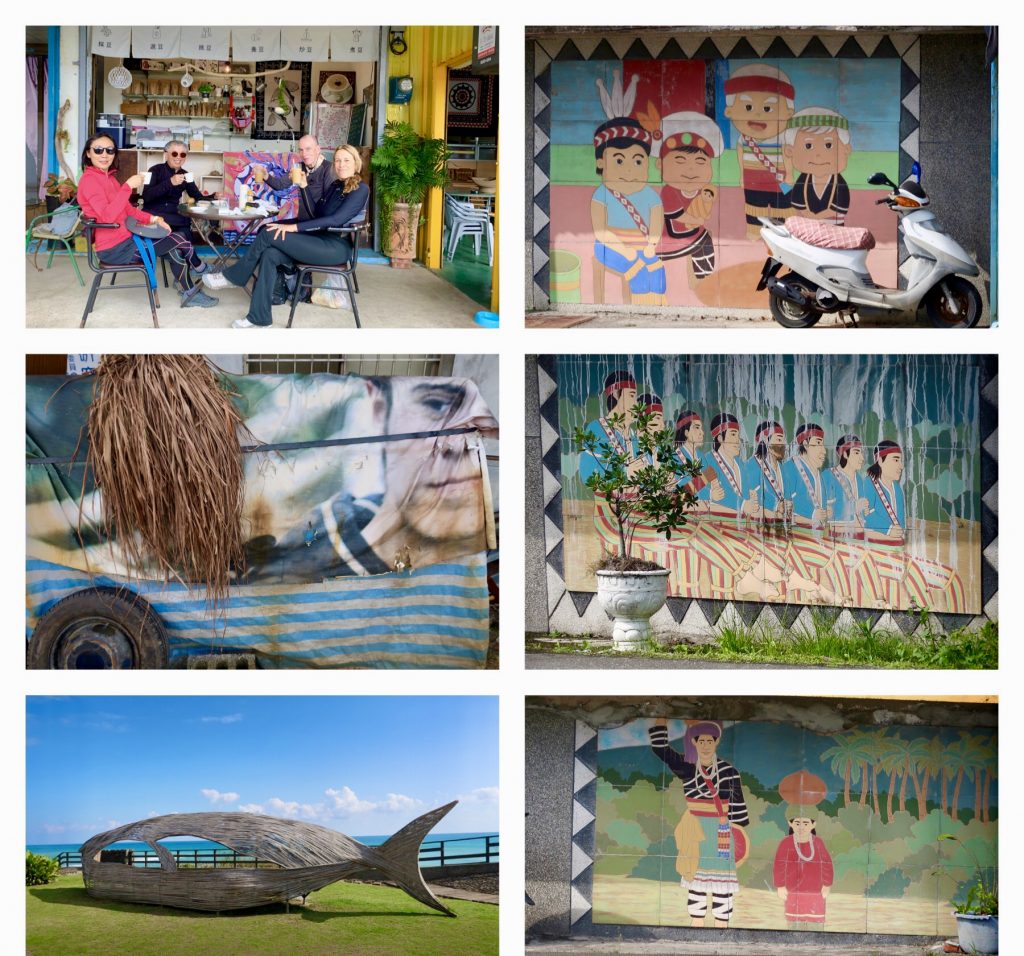 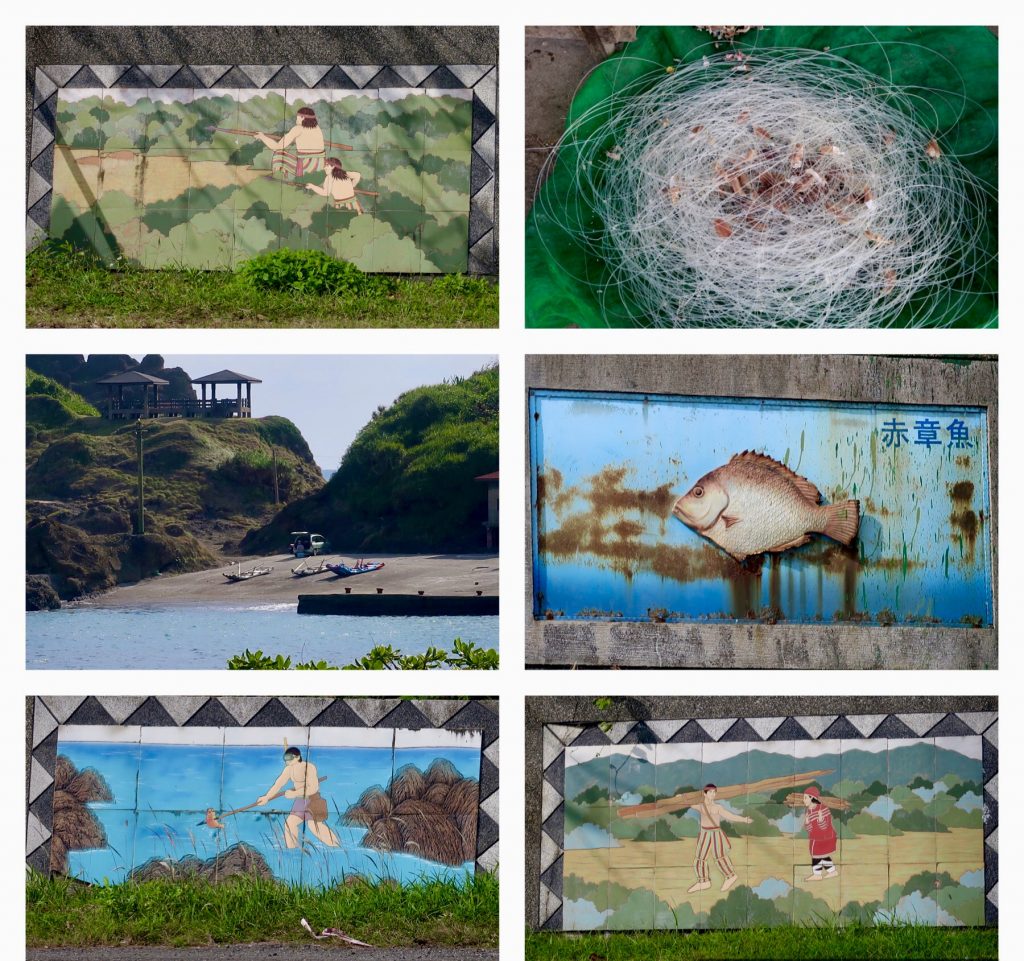 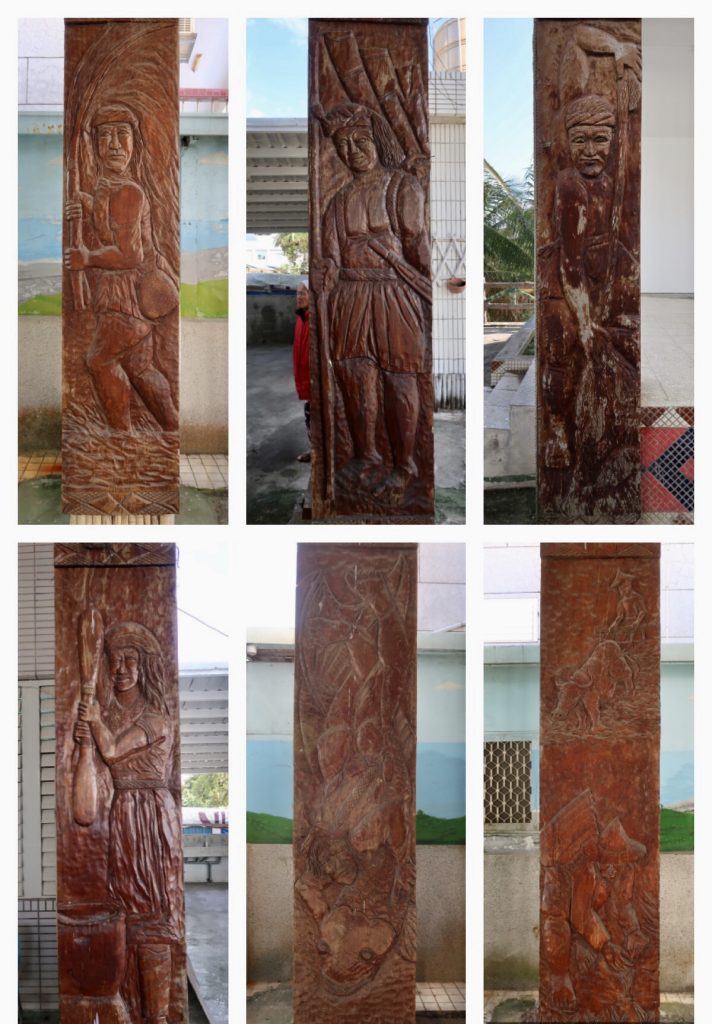 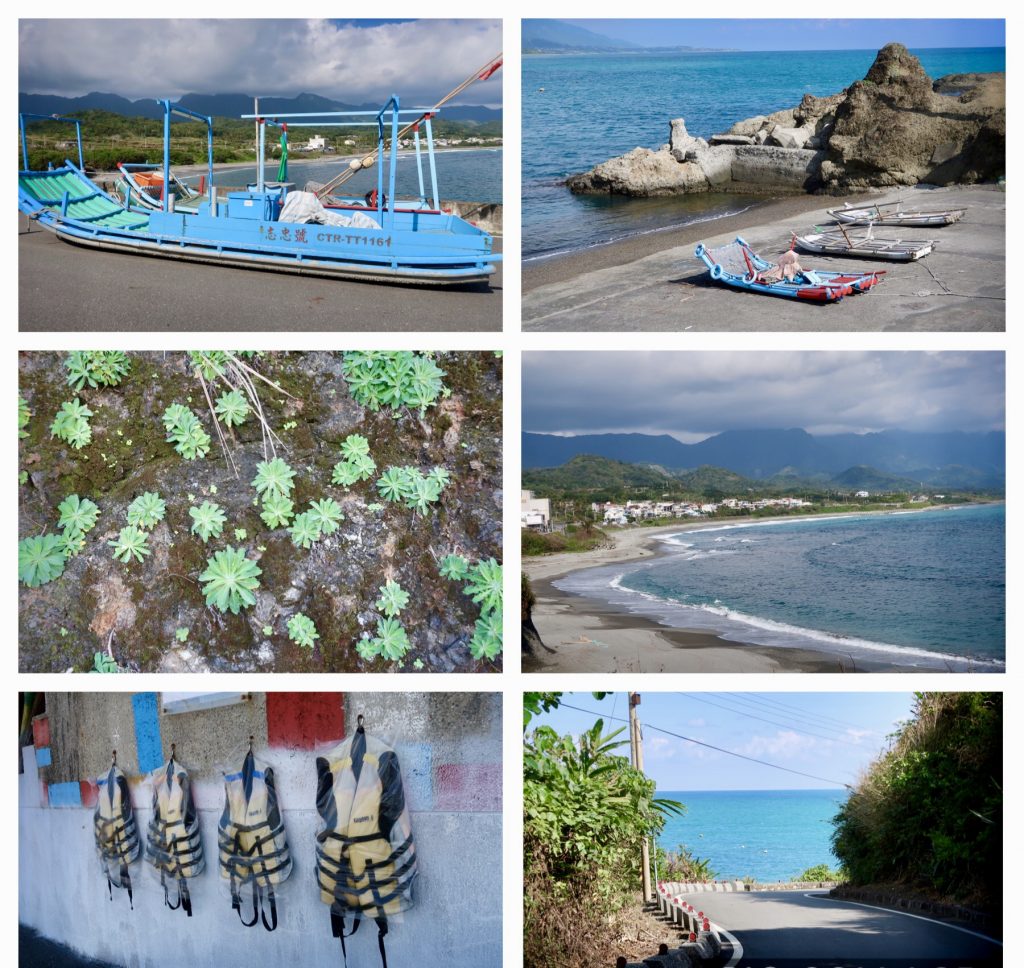 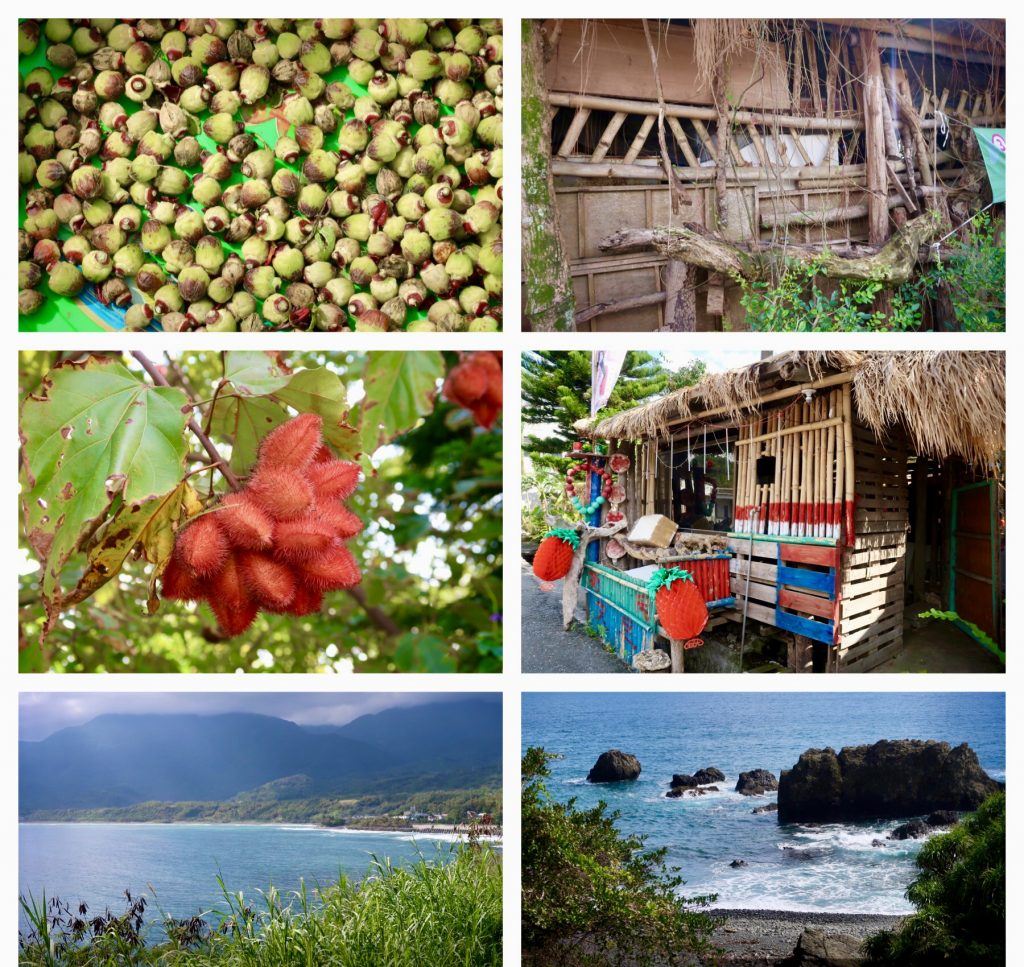 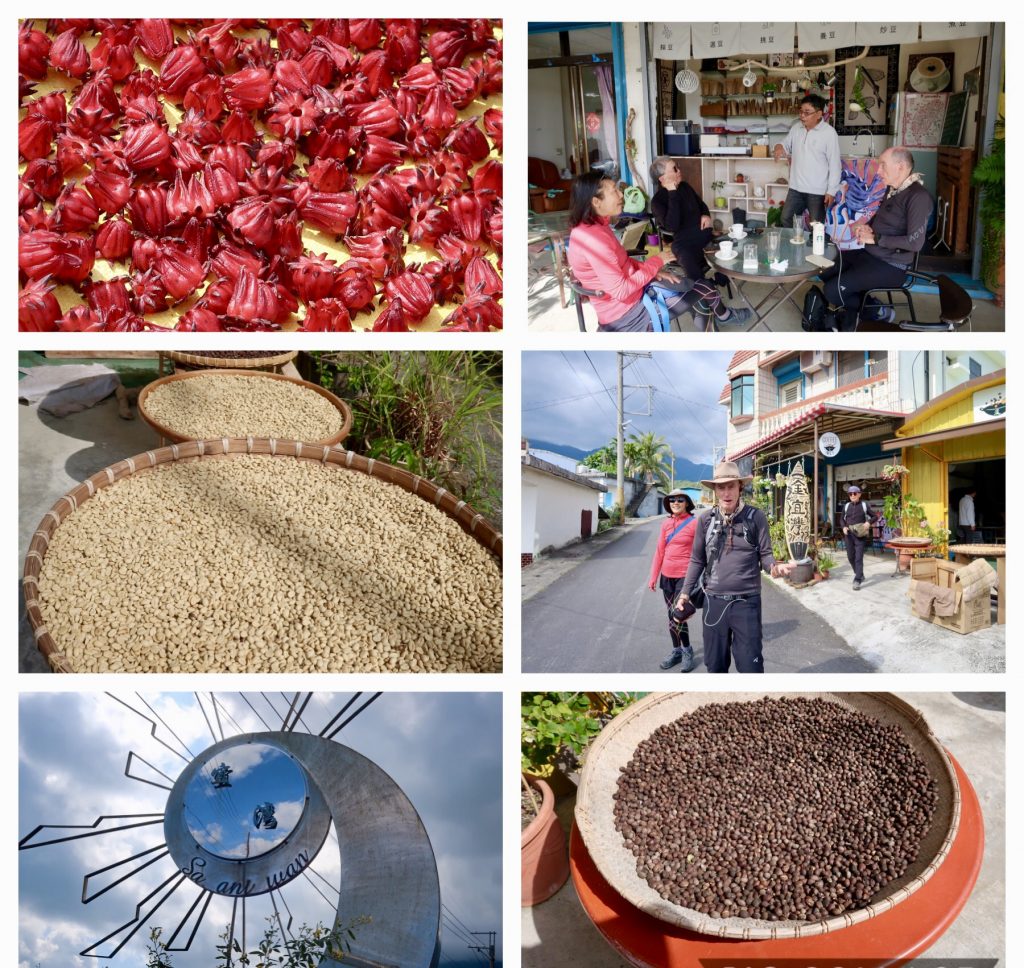 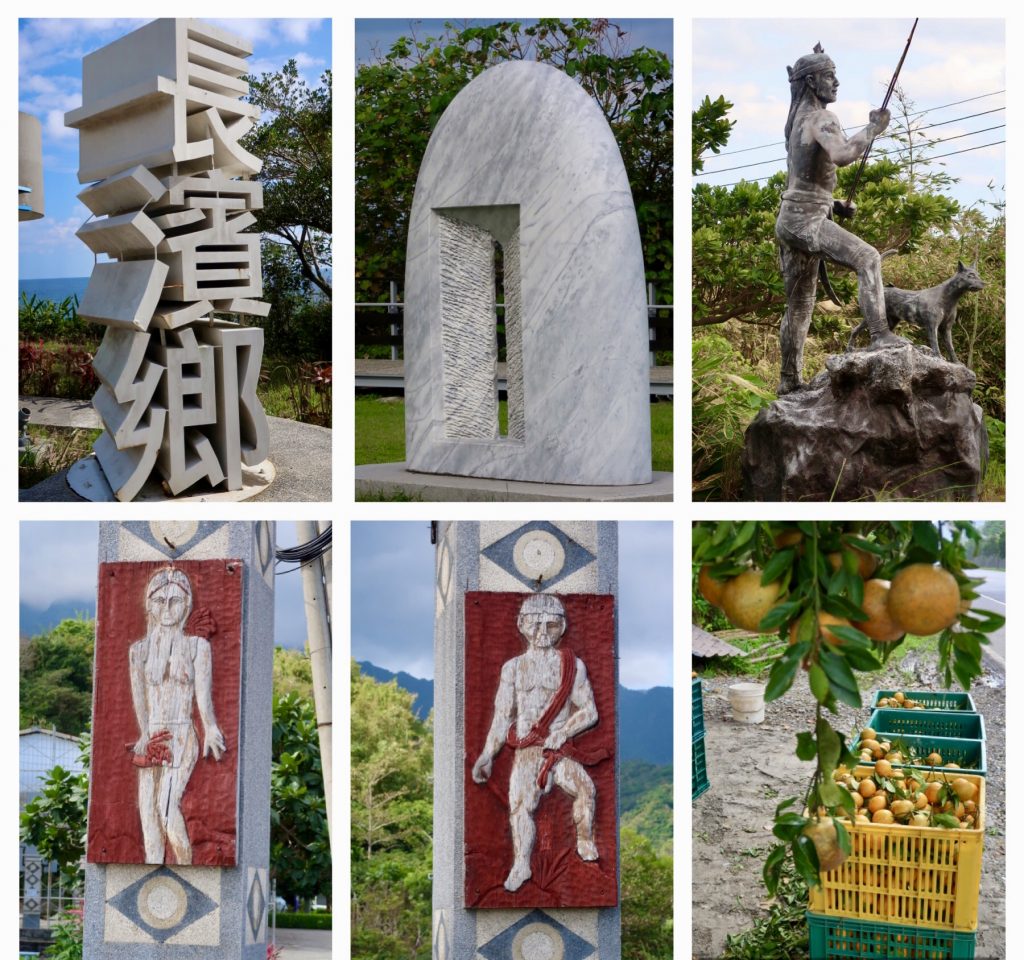 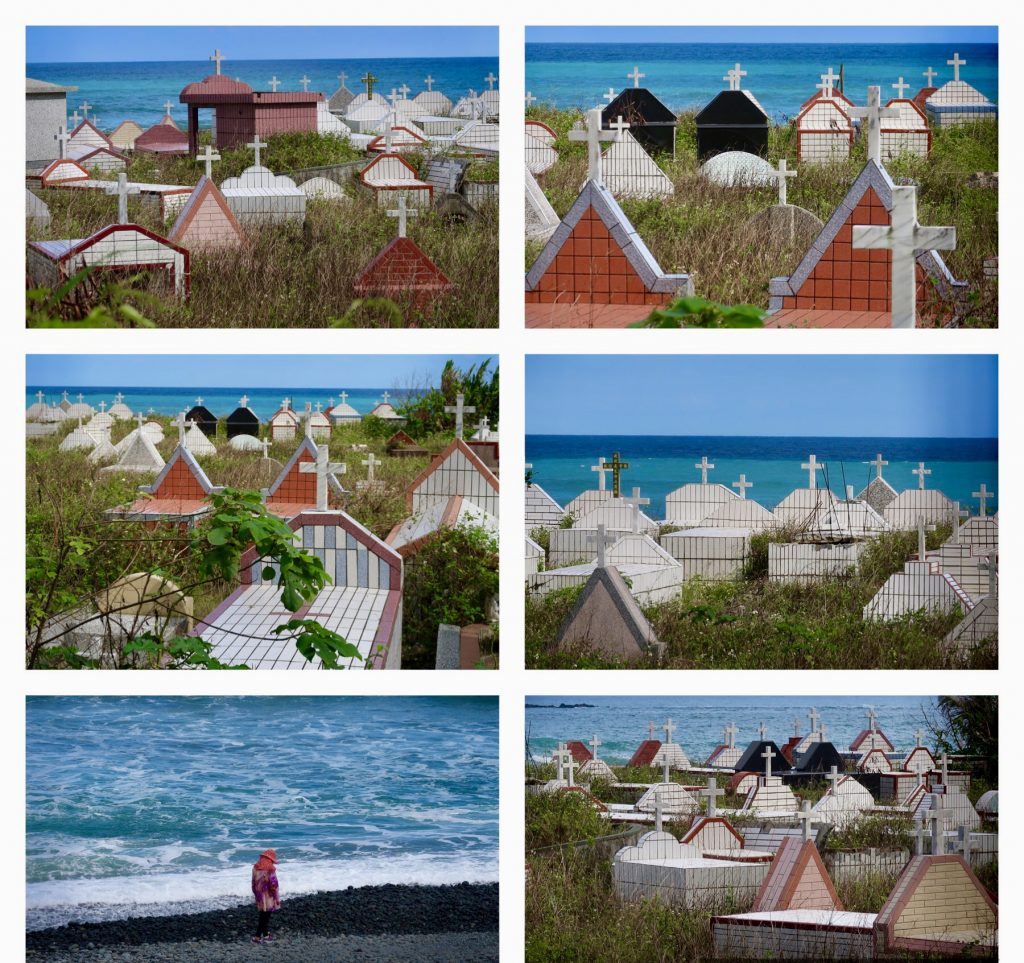 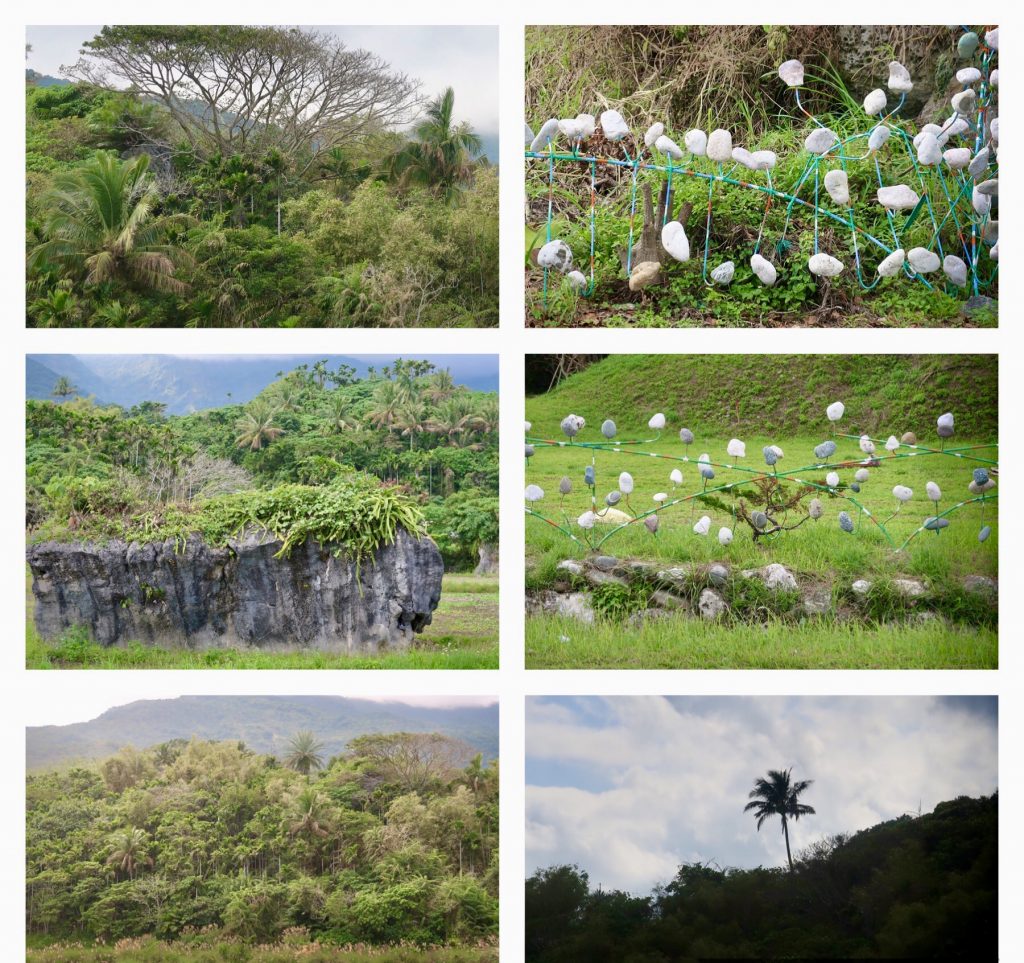 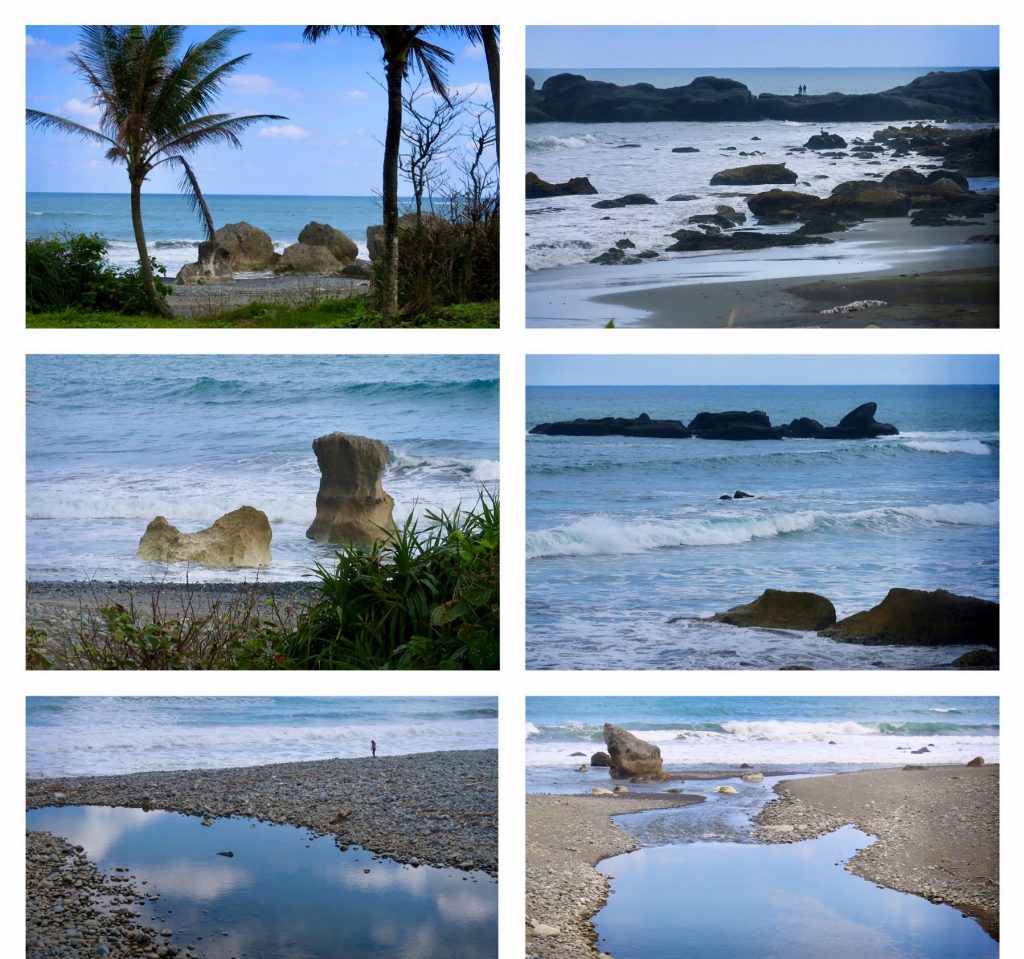 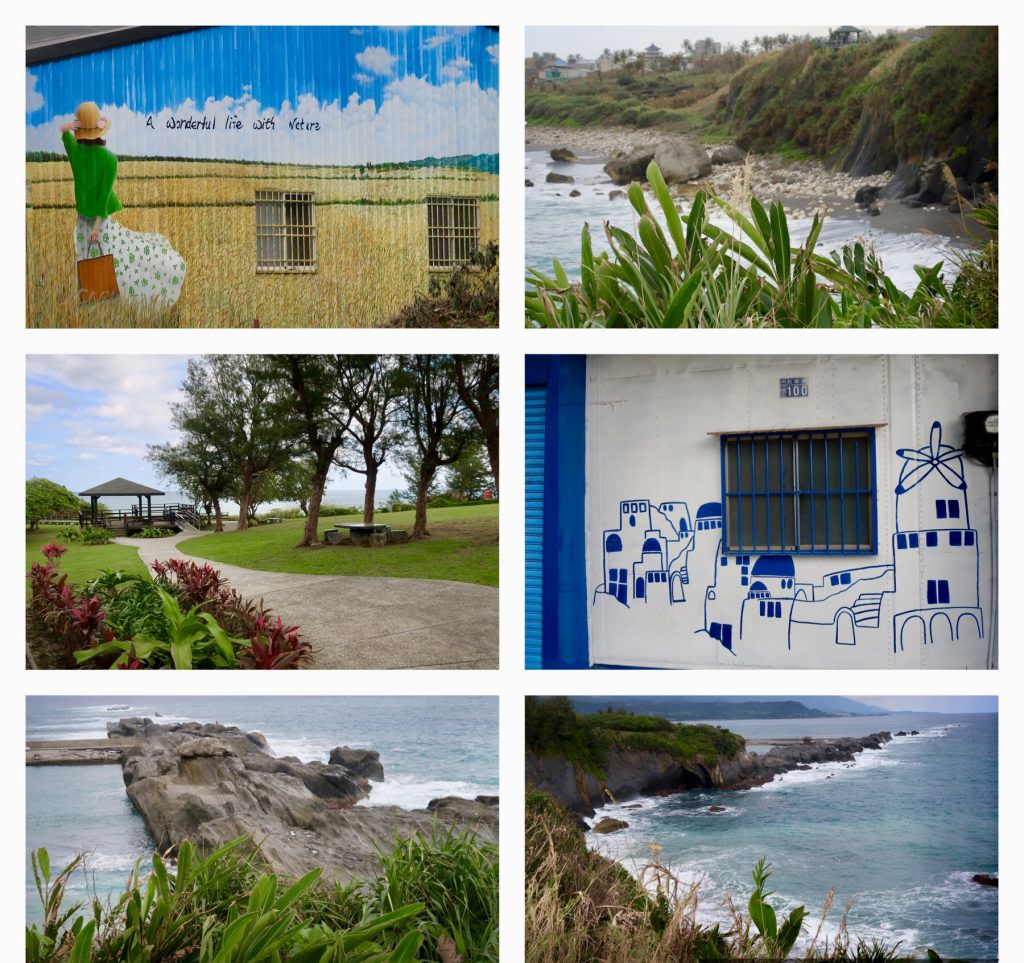 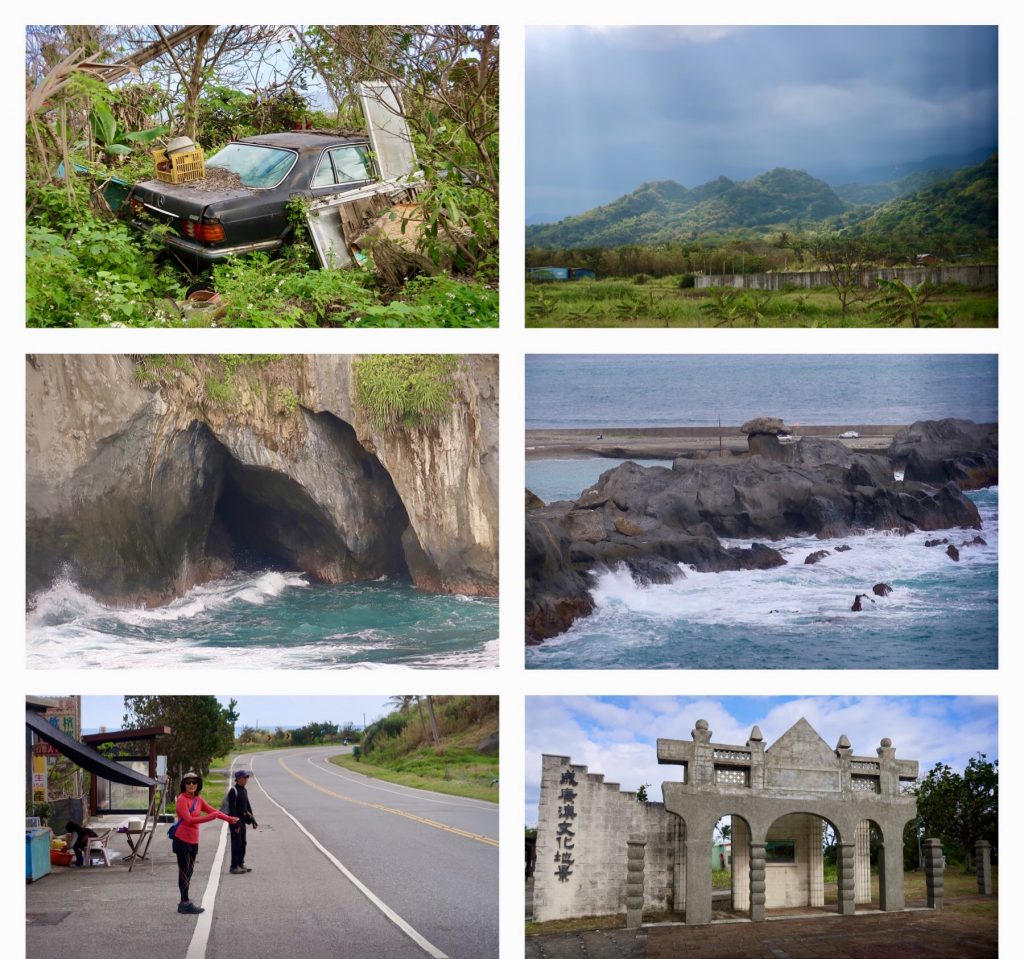 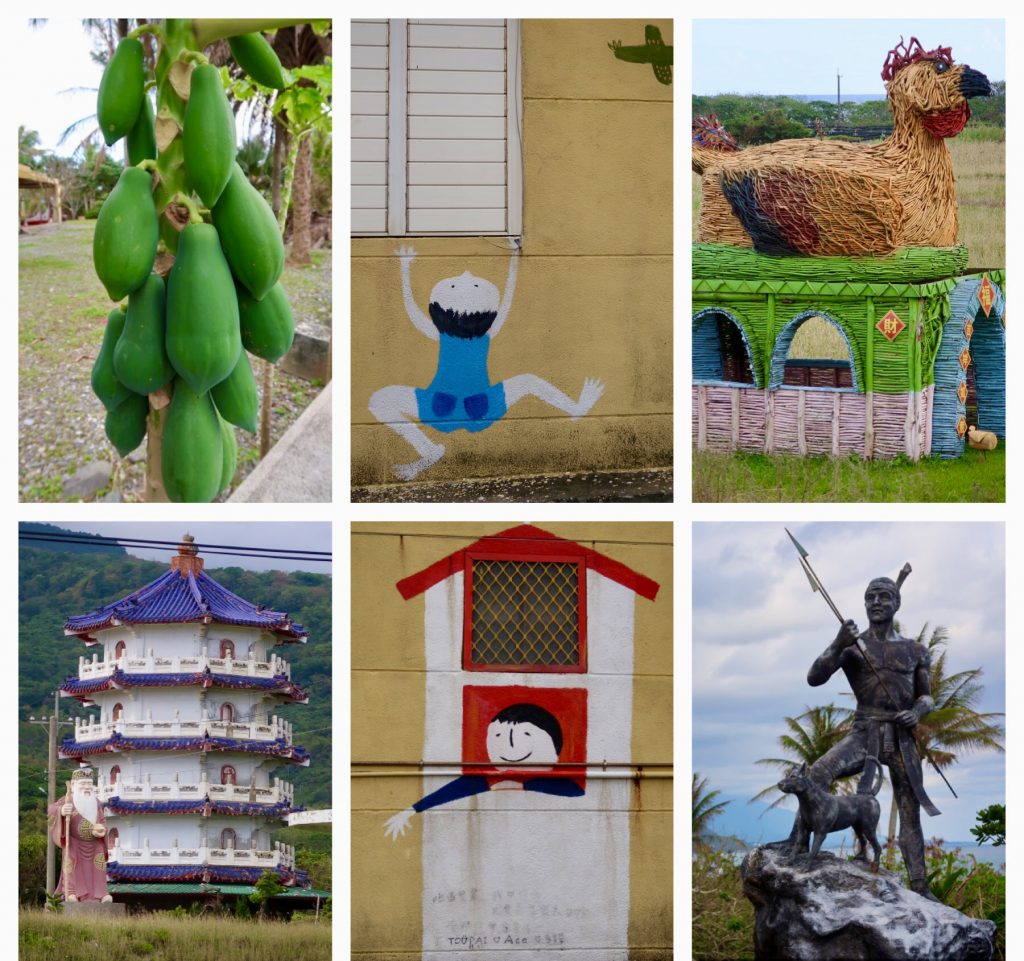 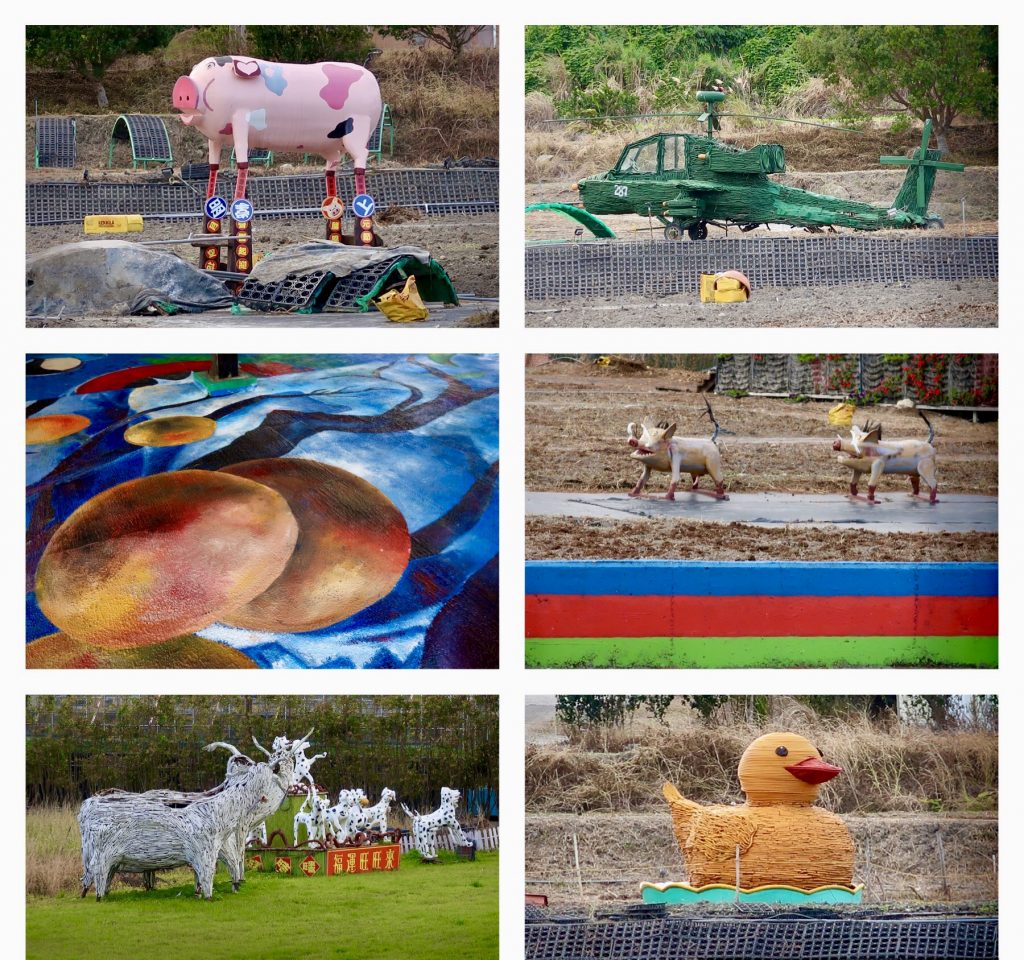 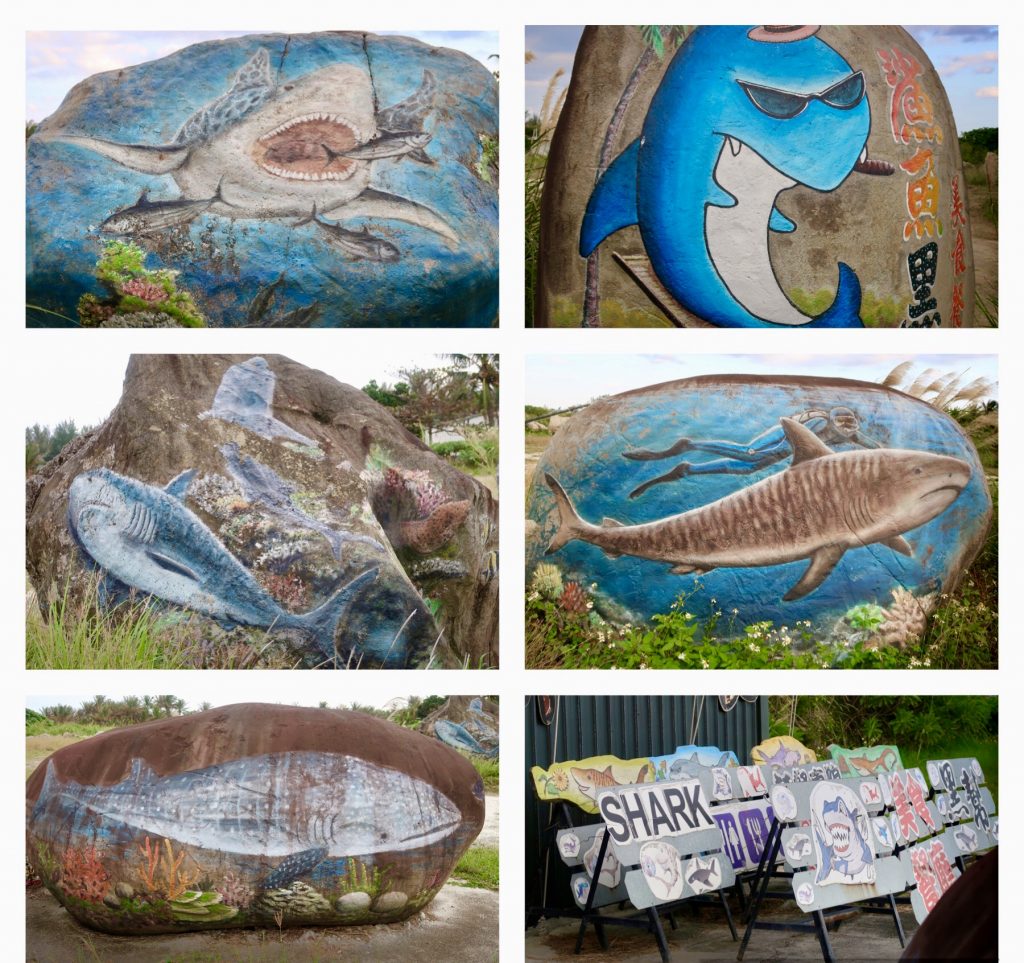 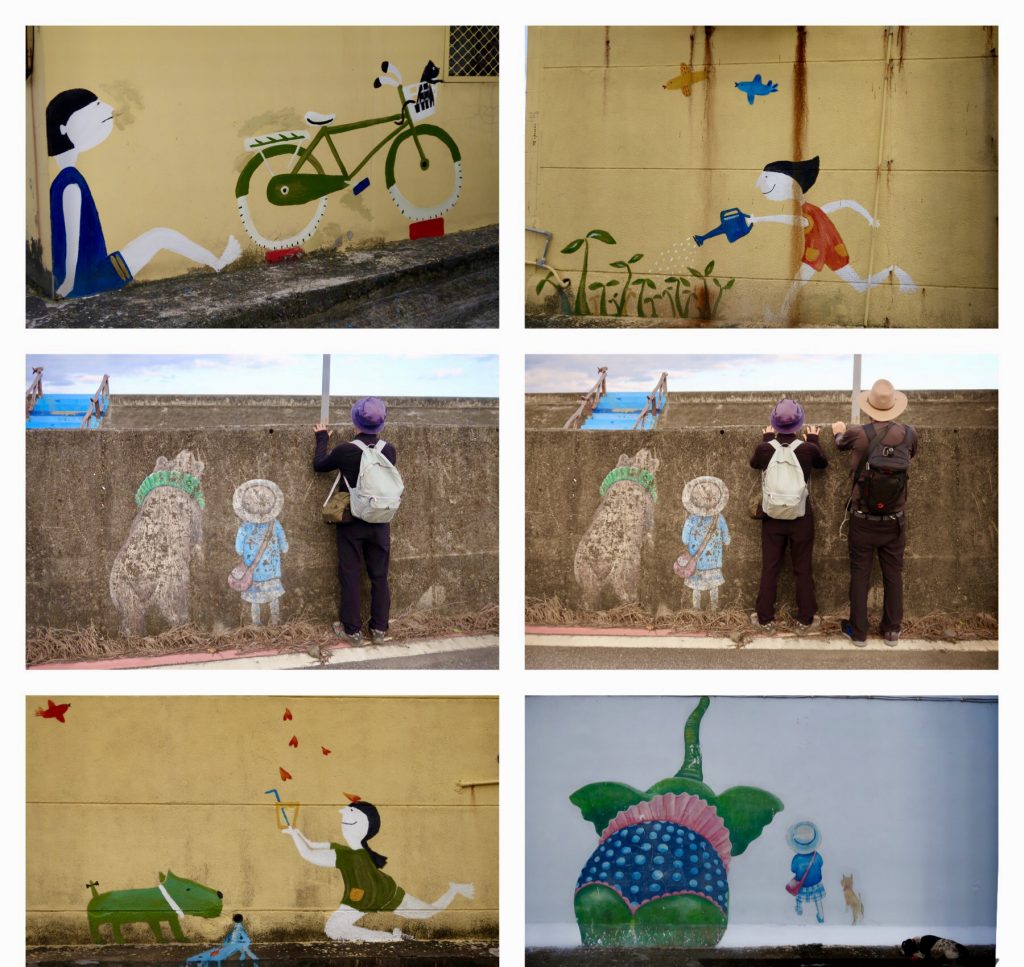 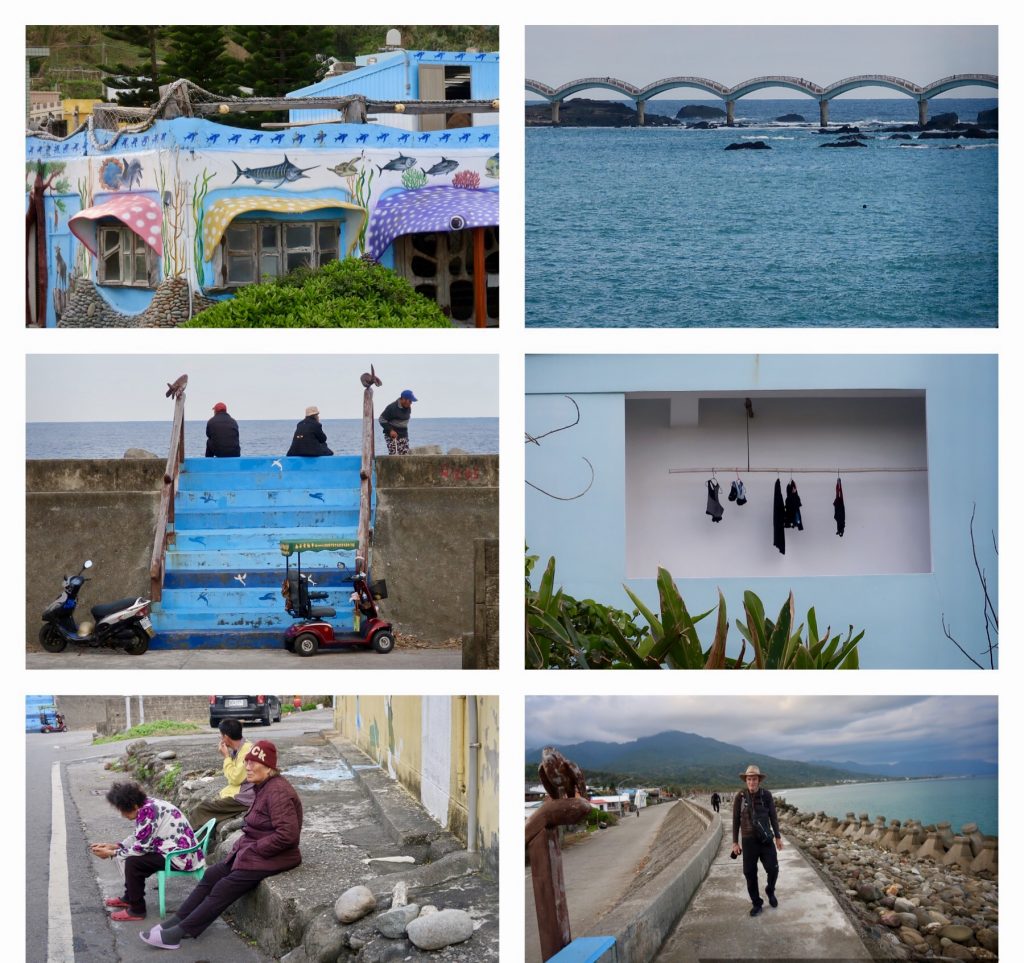 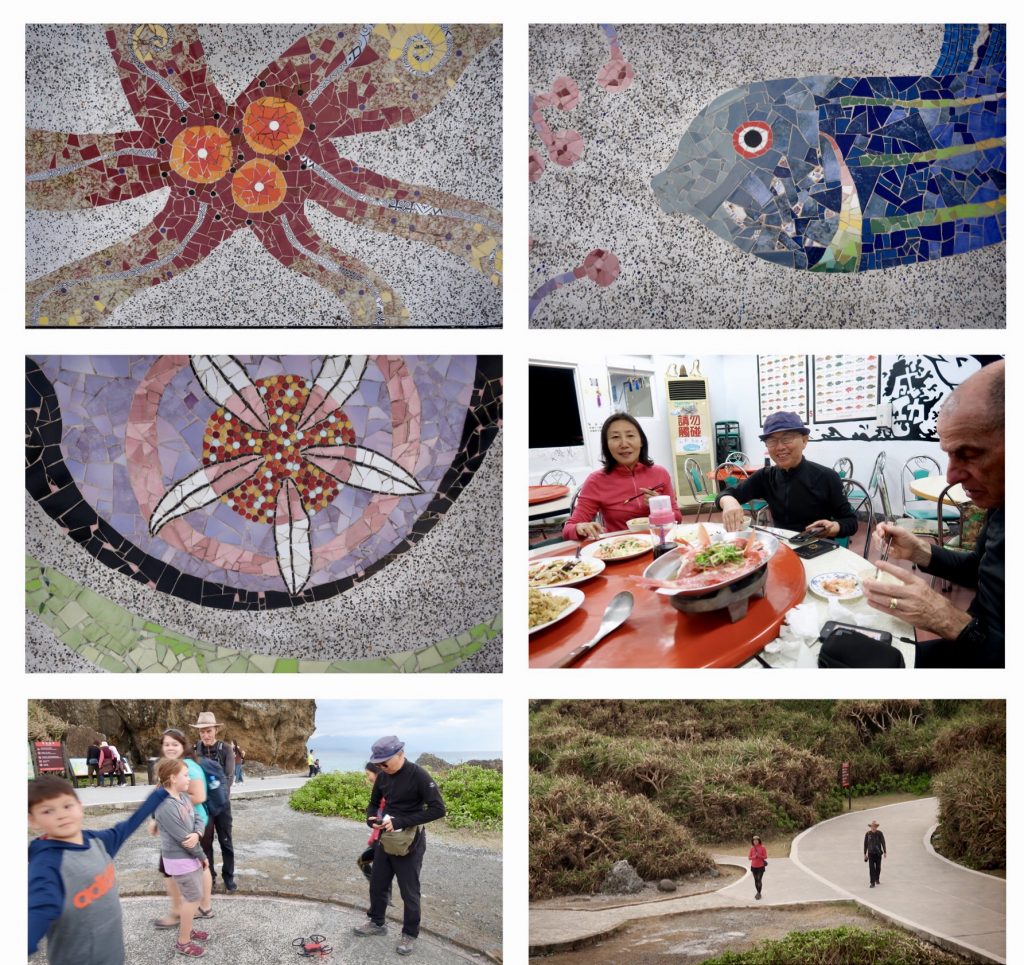 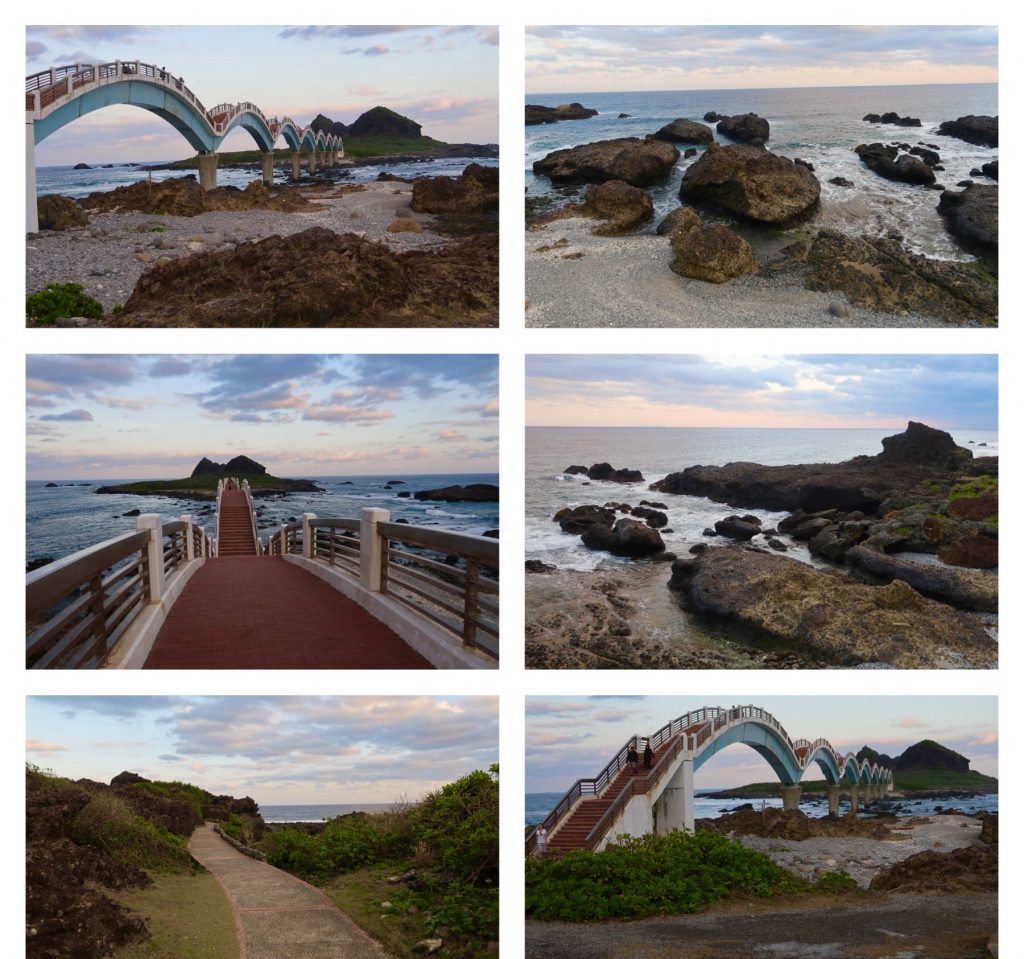 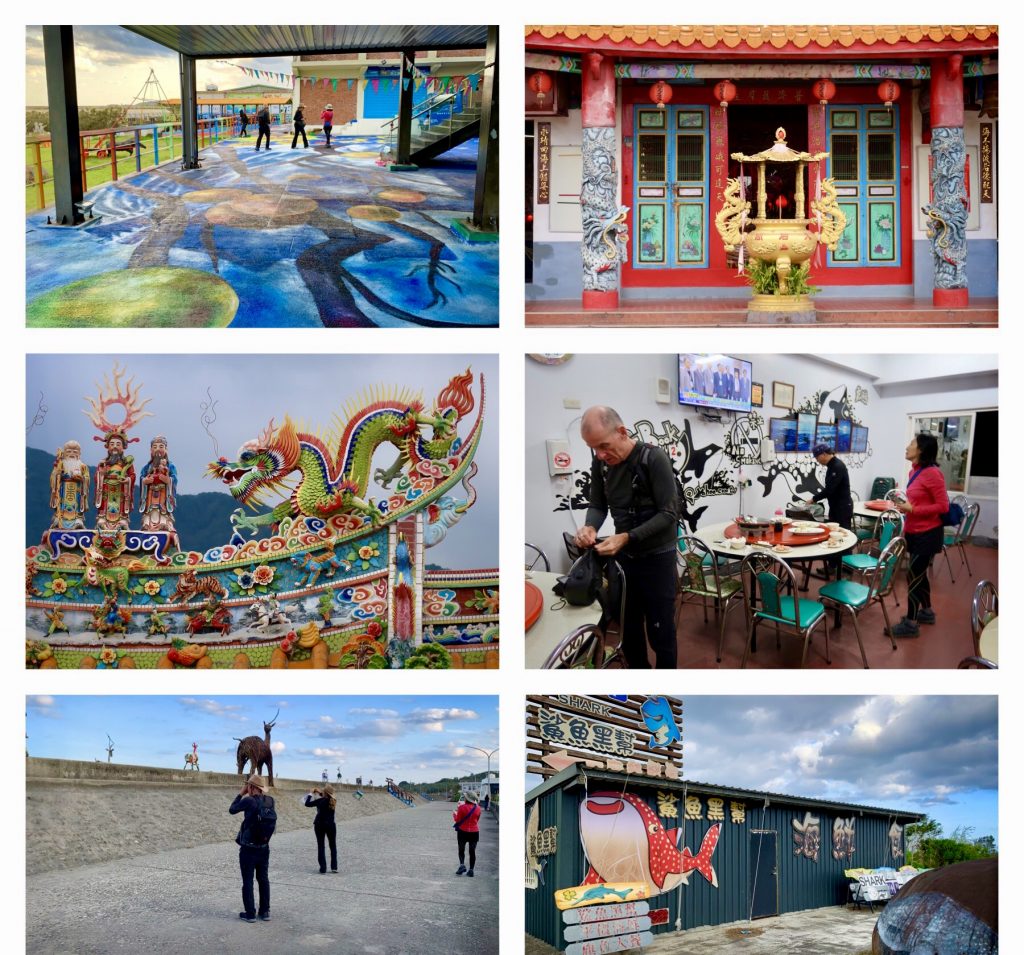 This morning I woke up and saw a beautiful sunrise over the ocean and cloudless sky.
It was going to be a pleasant but hot day of walking in the sun.

Breakfast was an array of tasty looking pastries (which I avoided), local fruit, which included a beet colored dragon fruit, guavas and local mandarins, a delicious nut bread, yogurts, and a Taiwanese rice congee (porridge) with topping choices.

We checked out, and Wendy arranged for a taxi to collect our backpacks and deliver them to our next accommodation.
She took the taxi driver’s phone number, because we were planning a very long day of walking and lots of sightseeing.
The sunset at this time of the year is very early, and we would not be able to walk much past 5PM, when it already gets very dark.

After checking out of the nice inn, we dressed in our lightest clothes and continued walking south along the Pacific Ocean.

We were walking through aboriginal land, and the names of the tribes living there are posted on poles decorated with beautiful sculptures of native hunters and fishermen.

In a small village, we came upon an activity center for the elderly.
They were just starting a stretching and dancing morning routine in the big open courtyard, decorated with wooden carvings done by local woodworkers.

We entered the courtyard and without asking for permission, we joined the circle of dancing.
The elders were delighted and made room for us to join them.

We stretched and danced with the elders for a few songs, and then chatted with some of the elder ladies who spoke Japanese.
One was a Japanese woman, and the other could speak Japanese. Many of the elders in Taiwan speak Japanese, since they had lived through the era when Japan occupied Taiwan, which lasted for fifty years.

By noontime, we were not yet hungry, but we needed to rest our feet and also to get out of the sun and the heat.
I was walking with my light trekker shoes, but Jules, Wendy and Joseph are walking with their waterproof shoes, which make the feet hot on warm sunny days.

I had read that the Taiwanese coffee grown in this region is very delicious.
It is grown on the steep lush mountainsides and it is processed in unique ways.

I suggested that we try the local Taiwanese coffee at a very small coffee shop that I spotted on Google maps.
The owner of the cafe explained to us that he roasts the coffee beans by hand in small batches in a wok, over a fire made of Sumi charcoal.

Sumi charcoal is used to produce the famous Sumi Japanese Ink, which is used by artists for calligraphy and brush painting.
It has deeper tones of black compared to other inks.

The coffee was delicious and smooth.
Joseph bought some of the coffee beans to take home, and after posing for photos for the owner, we finally left the little coffee shop and continued walking.

Clouds had gathered overhead, which made our walk a little more pleasant.
We walked by many creative sculptures by the ocean, my favorites being the ones from woven rattan and bamboo.

We walked to a small fishing port where we met two fishermen who had caught a big fish.
They told us that they had started fishing at five AM.

We had a simple lunch of Vegetable Fried rice and sautéed greens in a small restaurant run by one woman, and then we walked to a seaside fishing village that had mural paintings done by a famous Taiwanese artist.

His simple wall paintings of a little girl with a hat and her dog, attract visitors to the village, and now the village has a few shops, a cafe and a few restaurants.

But the biggest attraction in the area is the seaside Sanxiantai park, that has amazing limestone rocks and an impressive bridge with eight arches.

It is called the Sanxiantai Arch Bridge, and it is believed that the three Chinese immortals crossed this bridge to the little island on the other side, thus blessing the area.
The island is actually named after the three Chinese Immortal Saints: Lyu-Dongbin, Li-Tieguai and He-Xiangu. (It is translated as “Three Saints Island).”

The bridge is shaped like a dragon with eight arches.
The islands and the coral reefs of the Sanxiantai were formed by gradual erosion that cut the neck that connected the mainland to the main island, and thus created these offshore islands.

Visitors to this place could only reach the island during low tide.
In 1987, the government completed the eight cross-sea arch bridge that crosses over to the island.
It was designed in the shape of a prostrate sea dragon riding the waves, and connects Sanxiantai with Taiwan Island.
It has become the most famous landmark on the East Coast.

The entire Sanxiantai area is about 22 hectares.
Strong weathering and erosion encouraged locals to tell legendary stories about the area.

As we walked around the island towards the bridge, the sky was colored in the pink and red tones of sunset.
The scattered sea trenches, sea caves, sea columns and sea walls created rocks that look like mythical animals.

On the bridge, I met an Israeli couple whom I had seen while we were in Taipei.
I started talking to them about their travels in Asia.
They had first visited Japan and now they were traveling around Taiwan in a rented car.

A taxi driver waited for us and took us to the town of Chenggong, where we had dinner in a small family seafood restaurant.
We chose a fish from the newly arrived catch of the day and selected some fresh bamboo shoots, cabbage, some shrimp and a fried rice.

The taxi driver’s wife took us to our accommodation for the night.
It was very dark, and the modern guesthouse was located on a gravel road in the mountains across from the sea.

It was nicely designed in a minimalist and simple way, but very airy and comfortable.

← Taiwan Walk – Day 3 – Shitping Township to Changbin Township, Visiting the Baxiandong Prehistoric Caves, Crossing The Tropic Of Cancer, and An Amazing French Dinner In a Small Village
Taiwan Walk – Day 5 – Chenggong Township To Donghe Township, And How We Became The Guardians Of Four Abandoned Puppies →