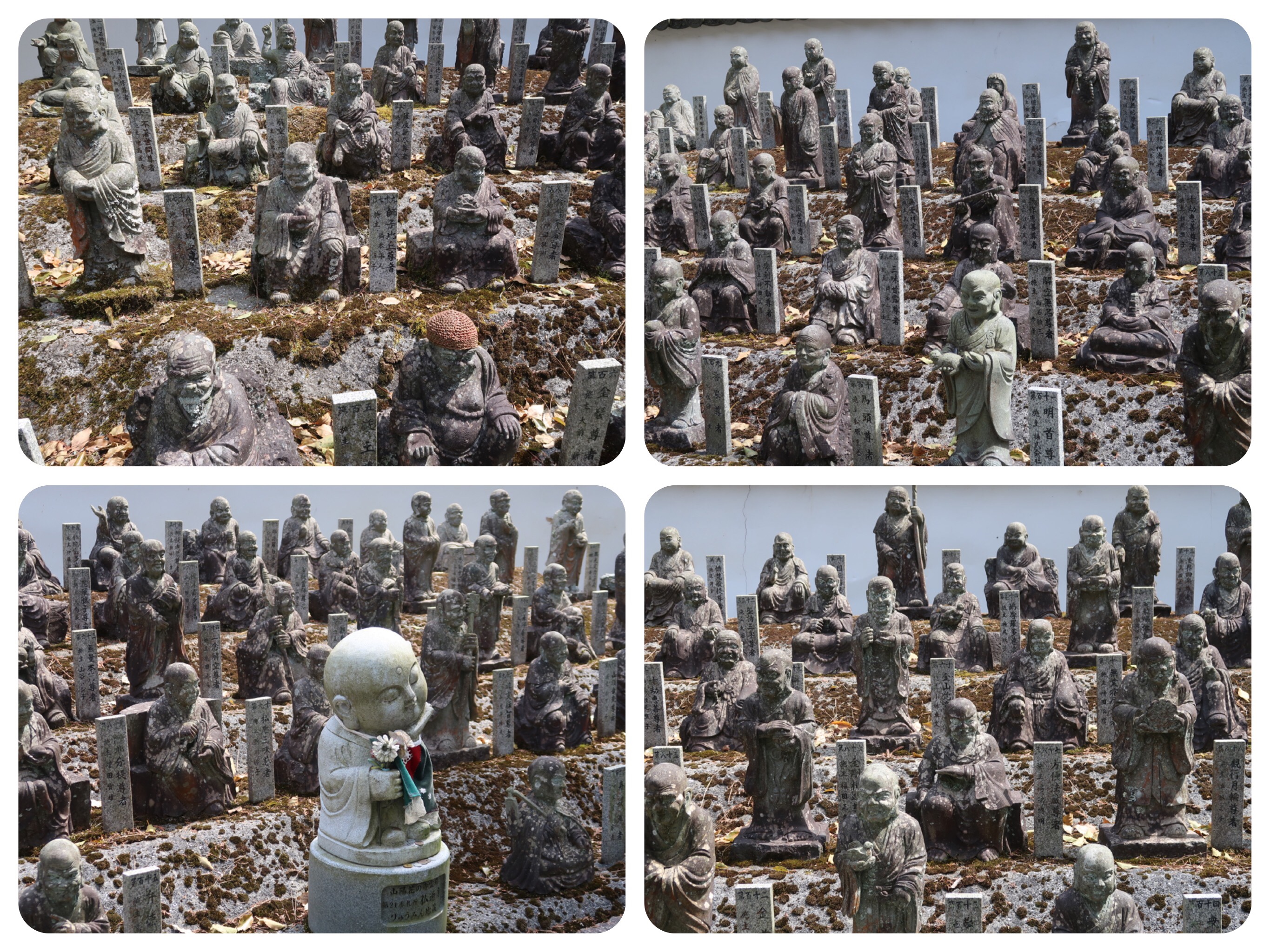 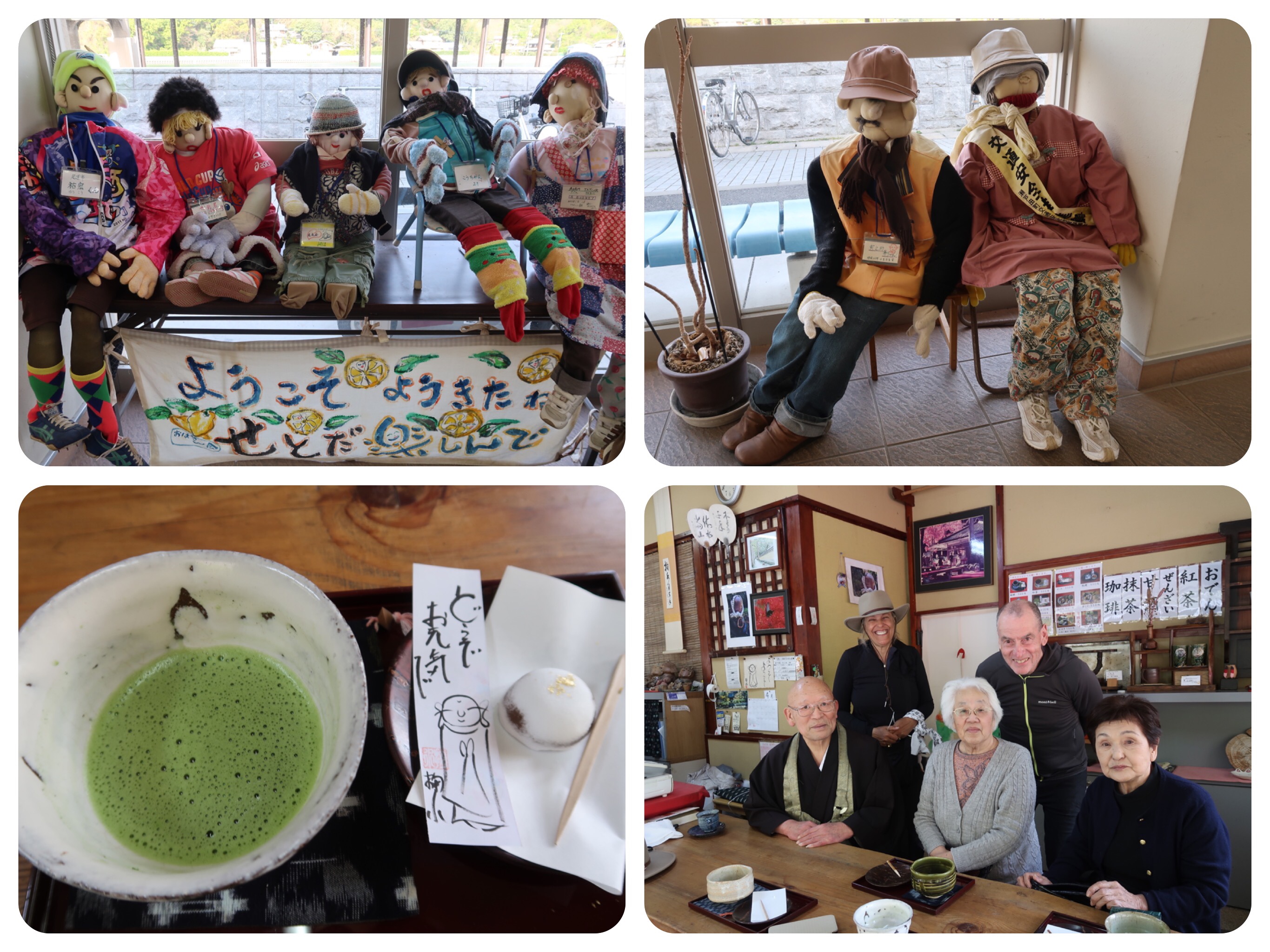 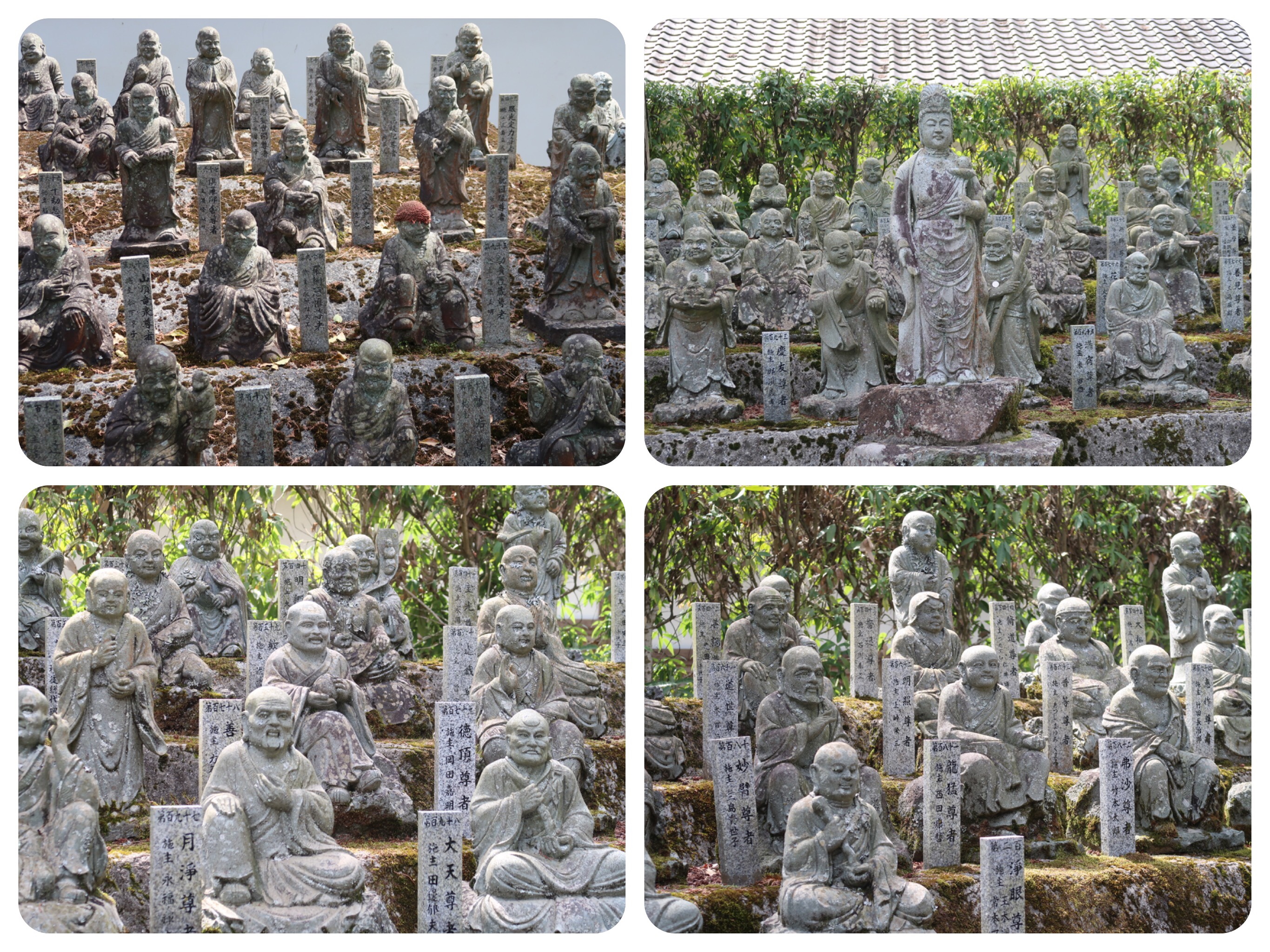 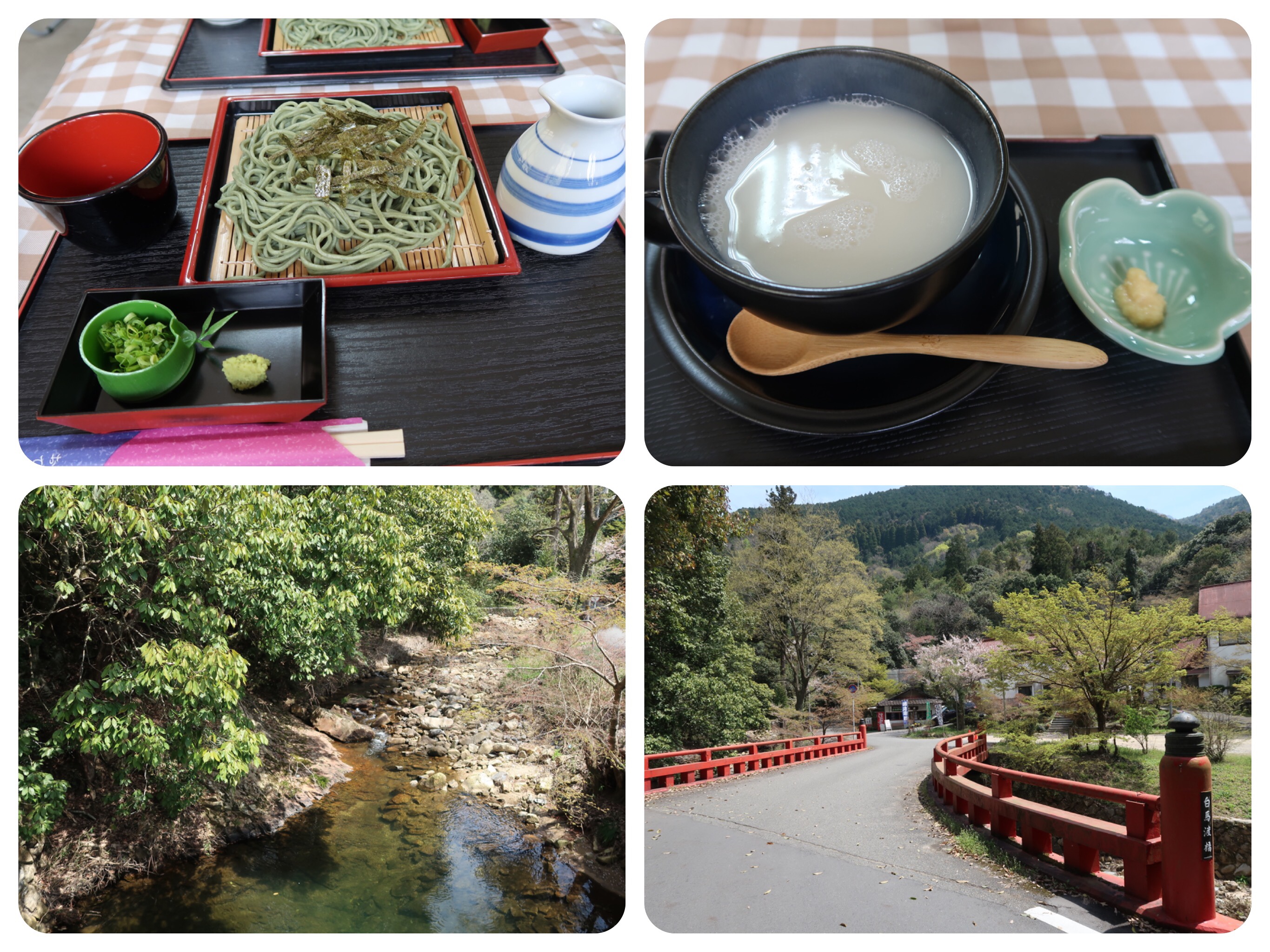 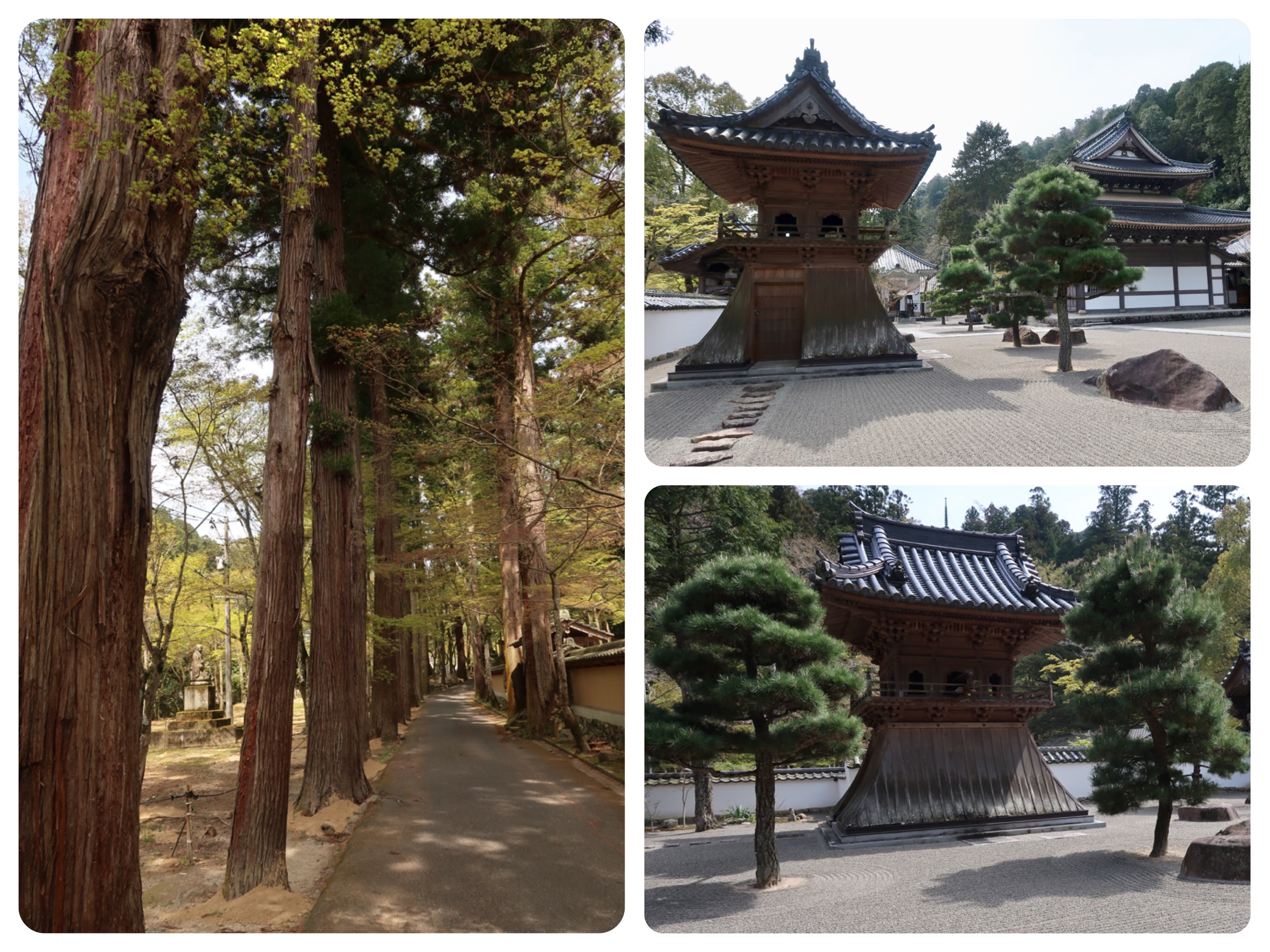 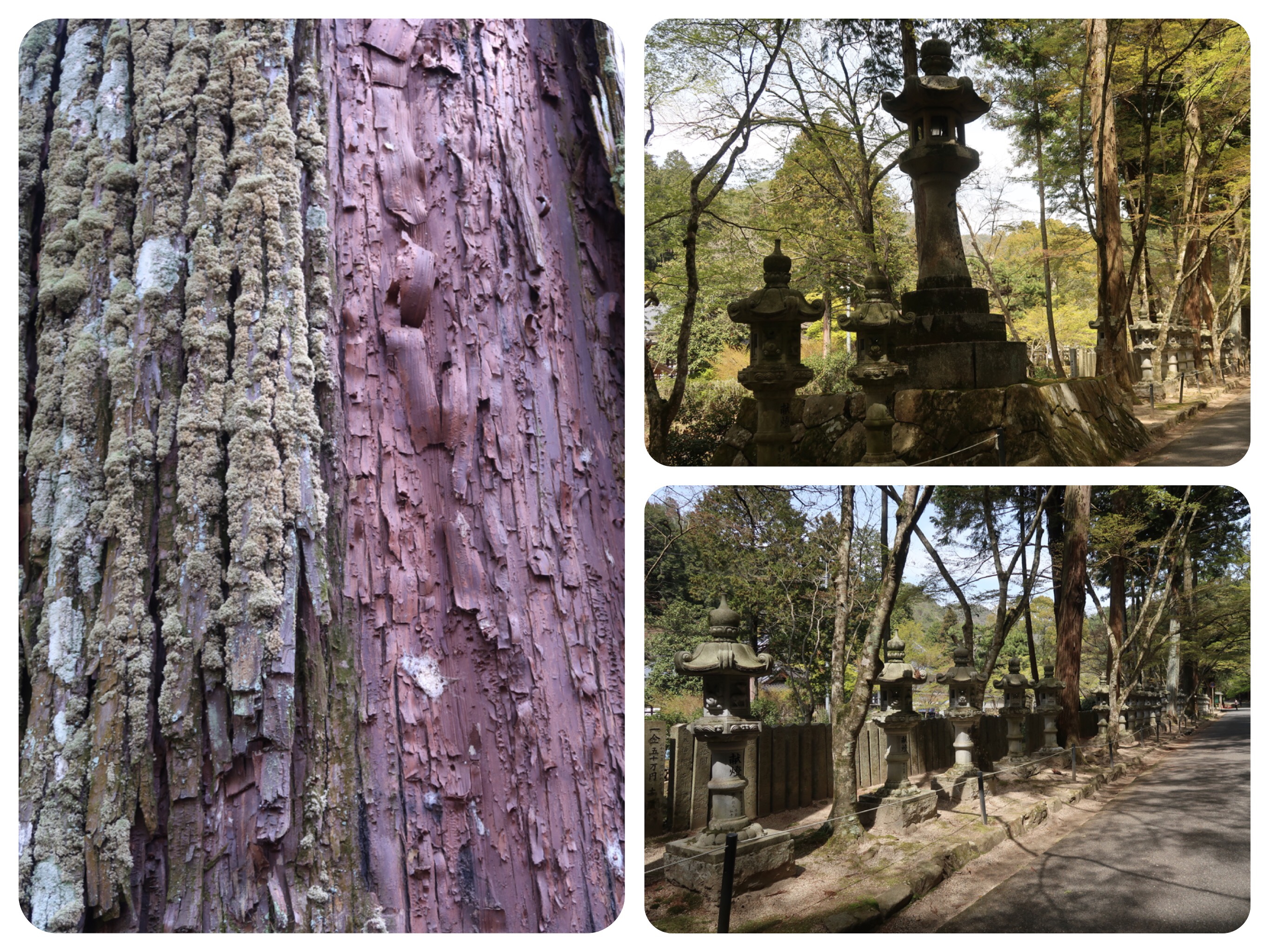 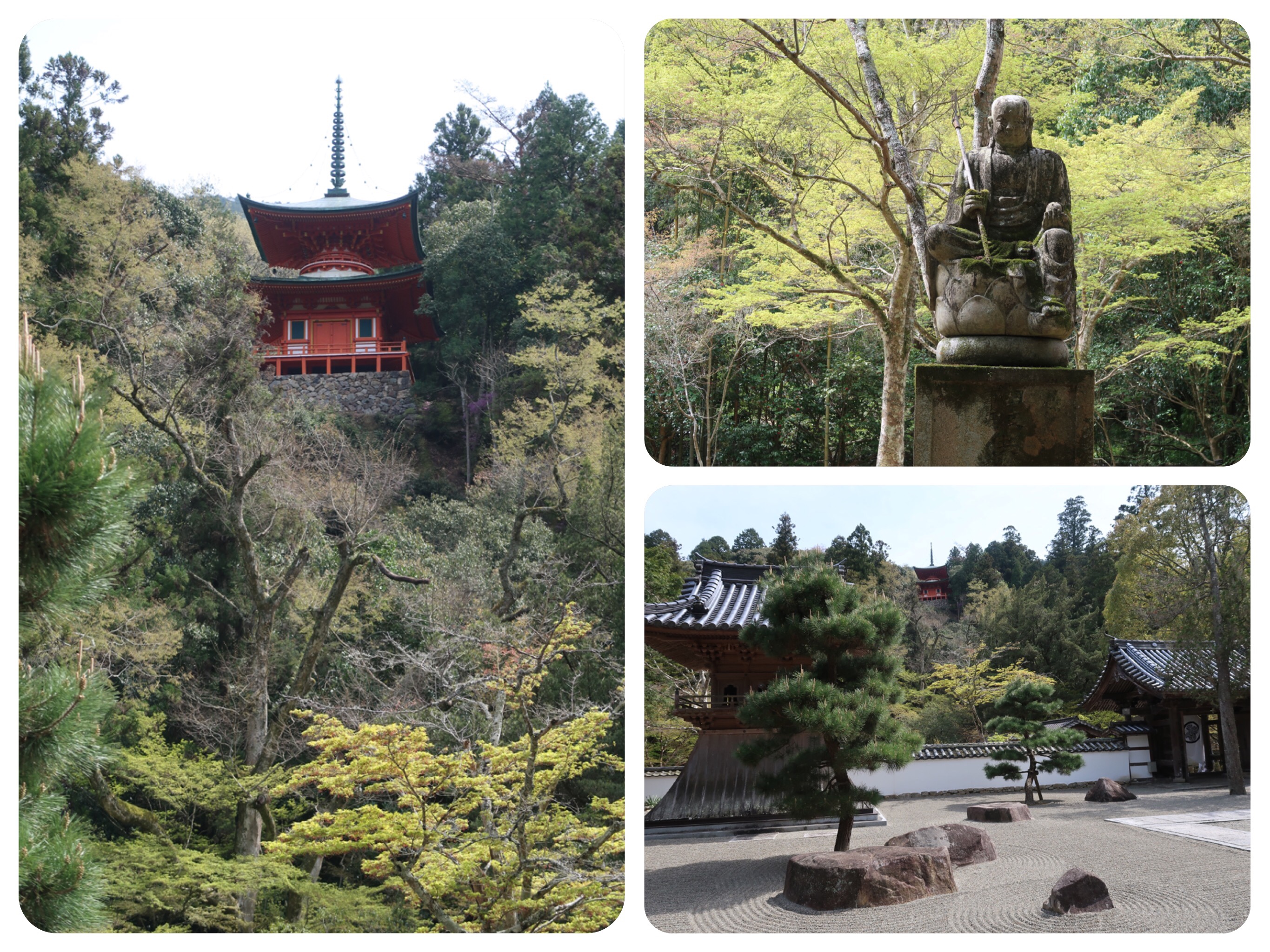 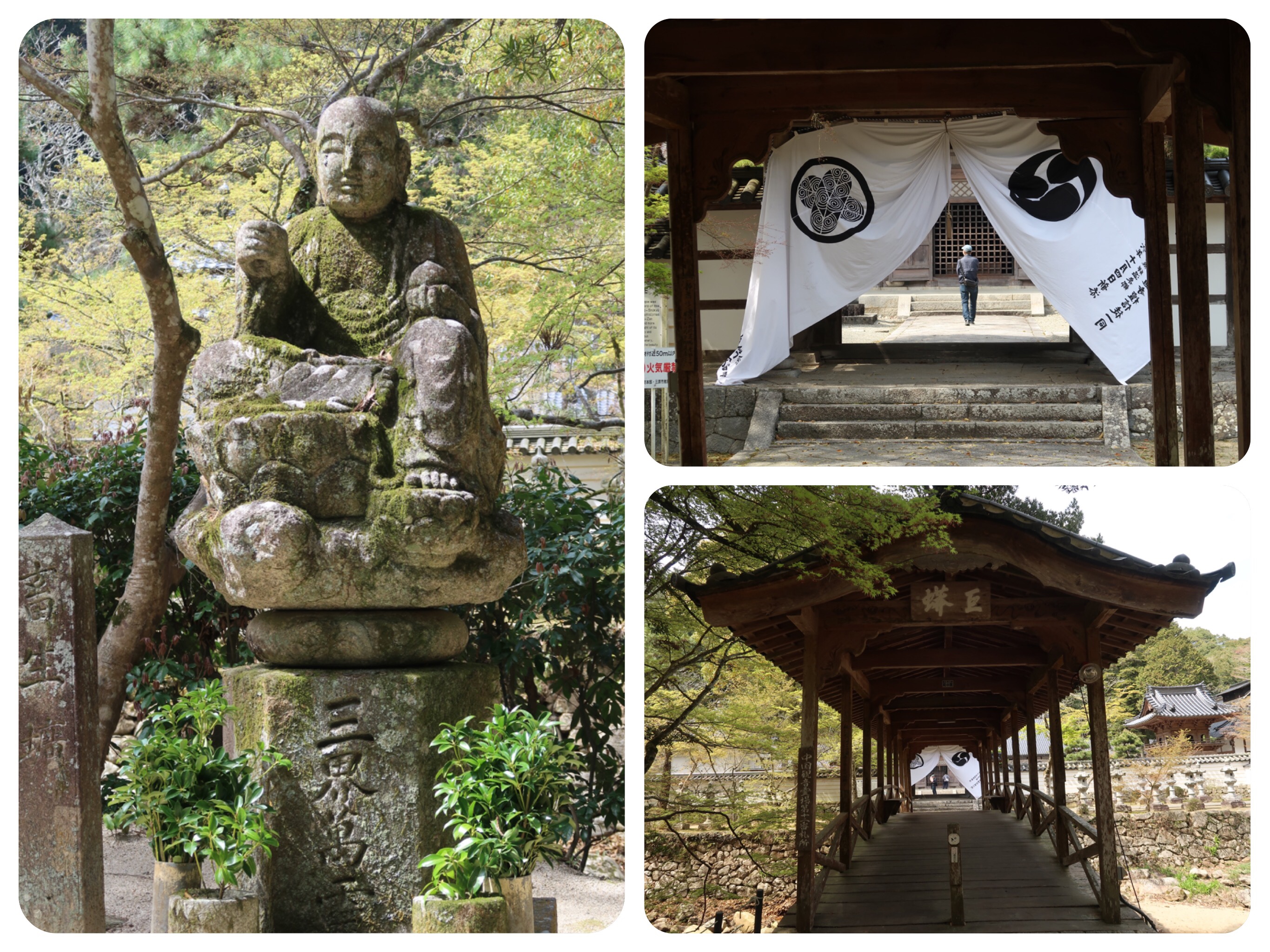 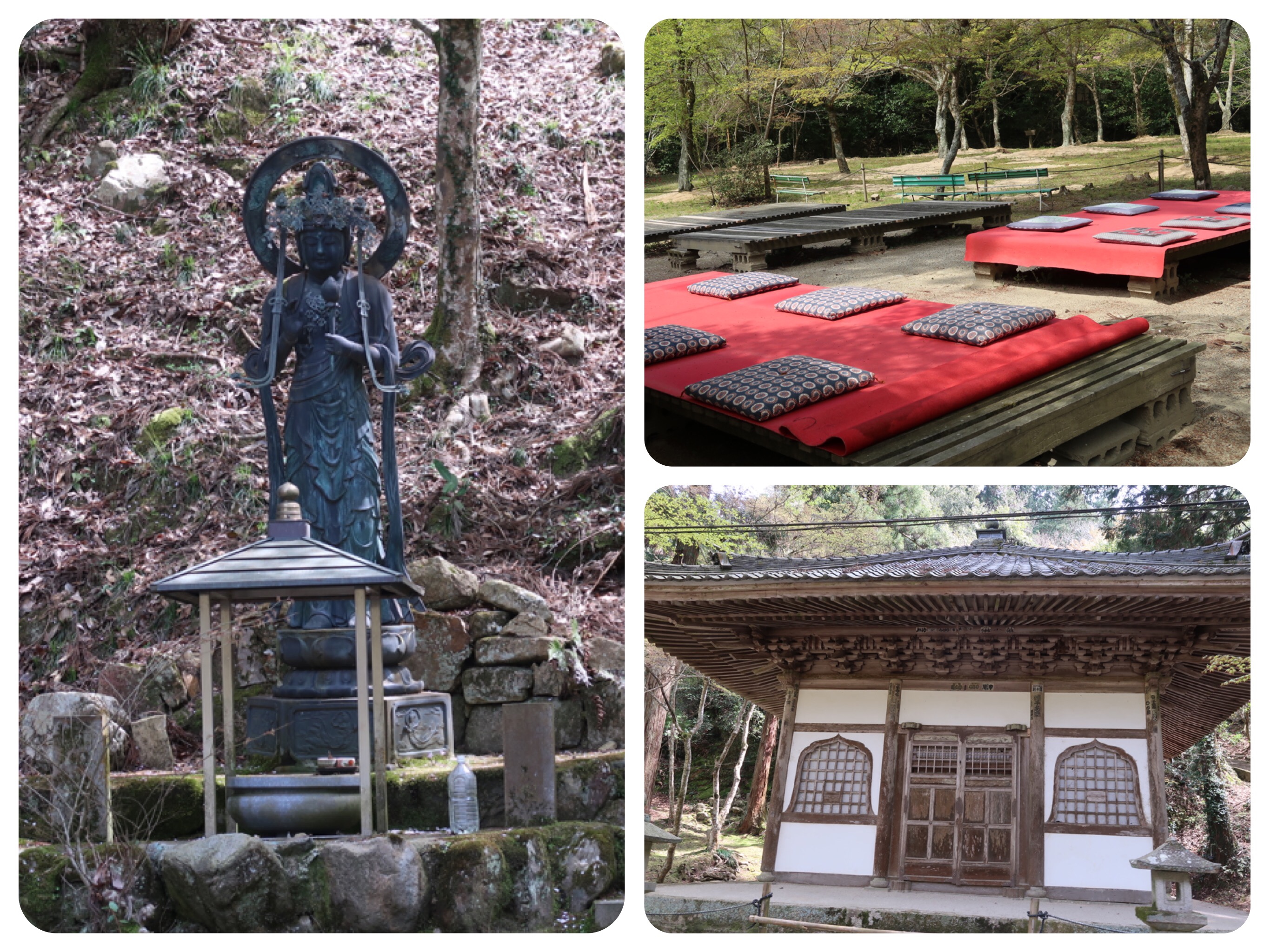 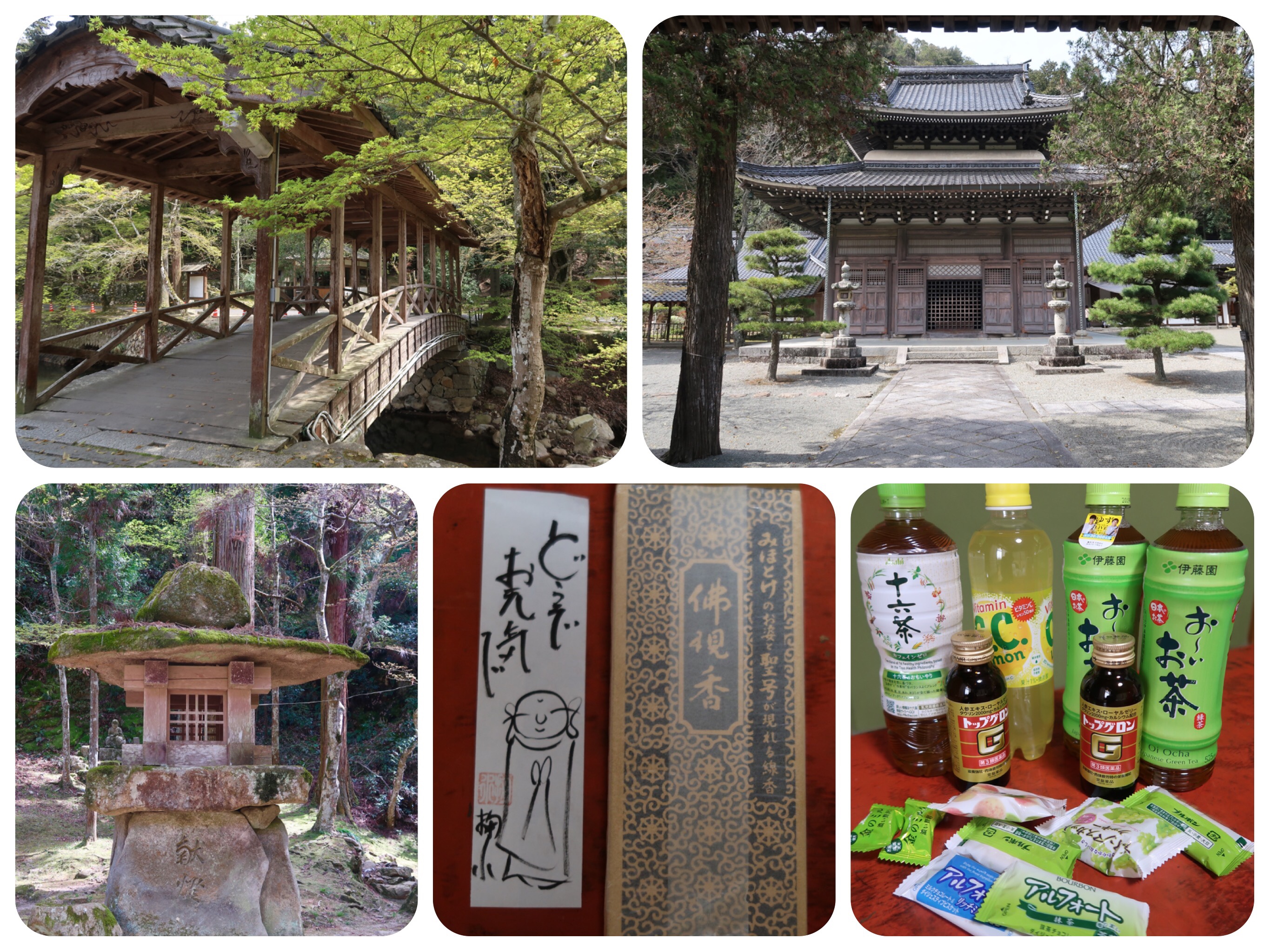 Day 11 – The Chūgoku 33 Temple Kannon Pilgrimage, Japan – The Beautiful and Remote Buttsuji Temple, and People Showering Us With Gifts in Northern Mihara

Today felt like a very long day of walking.
We only walked 27 Kilometers, but because we were climbing up and down all day, it felt much longer.

We asked for an early breakfast at our guesthouse, and took the first ferry going back to Mihara.
The owner of the guesthouse gifted us a small box of fragrant charcoal incense, used not to burn, but to deodorize your fridge or a toilet.
We thanked him and squeezed it into our already full backpacks.

Even though we knew that we would be walking into a remote part of the mountains, we did not pack any lunch and carried no water.
Our backpacks are so heavy, that we decided it might not be a good idea to add the weight of food and drinks to our load.

Even though my maps showed no places to eat and no cafes, we trusted that we would find vending machines to buy water and maybe a place to eat that was not listed on my map.

When we began to climb uphill, I started doubting my decision.
We were thirsty and hot.
But when we walked by a golf course, there were lots of vending machines.
We stopped to drink and take off some of our layers of clothes.

Most of the way, we walked through beautiful farmland, with kitchen gardens and farm houses with great tile roofs.

We walked up and up between mountains, until we neared Buttsuji temple.
We passed by a farm house and saw an old lady who was cleaning her patio.
We said hello and she asked if we were going to Buttsuji.
We said we were, and she asked us to wait.
She went into her house and came back with two bottles of green tea, and two bottles of an energy drink made from Ginseng, Royal jelly, calcium and vitamin C.

We thanked her and bowed many times.
I made a mental note to pray for her at the temple, and thank her for her kindness.
I could barely find a place to fit the drinks into our backpacks.
Jules generously suggested that in order to ease the pressure on my knee, he should carry the extra bottles.

We walked for another hour and a half up the mountain.
Very near the temple, we came upon a small Soba noodle shop.
I decided we needed to stop to eat, drink something and rest.

The lady who owns the soba cafe also runs an adjacent guesthouse.
Beside a delicious green tea Zalu soba, she served me a cup of hot Amazake.

I love hot Amazake.
It is a wholesome drink made of Koji rice, the short grain sweet rice they make Mochi rice cakes from.
It is a non alcoholic drink, that tastes naturally sweet.
To mellow the sweetness, she served me a mixture of grated ginger and salt, along with a tiny wooden spoon for me to use.

I was never served salted ginger with Amazake before, but I have to admit it tasted absolutely delicious.
The green noodles were also very good, and our legs and feet, after four hours of climbing, felt very much in need of a little rest.

From there, it was only a short walk to the temple.
The temple is a famous spot to view the red autumn leaves in the area.

Many worshipers and tourists visit this temple.
The path to the temple is lined with very old trees.
There is a vast cedar forest, up the mountain, with a red pagoda shimmering on the top.

It is said that the beautiful Buddha wooden bridge stretching over the rocky river which leads to the temple, is a mystical holy place, protected by unseen Buddhist law.

By crossing this bridge, it is said that you will become aware of the true nature of your body and mind, and it will become a bridge symbolic of the gate of liberation and enlightenment, that the Buddhist vows promise each sentient being will one day cross.

It is further believed that when you enter the temple’s gate, the Buddha will calm you.
It is a temple of the Rinzai sect of Buddhism, and is about 600 years old.

Many of the cedar trees are over a thousand years old, and there is a collection of 500 small stone Arahats behind one of the halls.

We washed our hands and mouths in the Dragon fountain, lit three incense sticks, one for the Buddha, one for the Dharma (the teachings) and one for the Sangha (the community), and then we prayed and chanted the Heart Sutra.

At the office, we got our pilgrimage book and scroll stamped.
Another pilgrim, who spoke some English, showed me his bag and said that he too was doing the whole Chugoku pilgrimage.

I was happy to meet another pilgrim and asked if he too is walking.
He looked at me as if I were crazy and said no, no, he was driving the pilgrimage.
He then told the monk in the office that we were walking, which elicited more sounds of awe.
The monk in the office handed me two handfuls of sweets and cookies and wished us a good journey.

Buttsuji is a temple with a living congregation of Buddhist monks and priests.
It is also a place where lay people can come and practice meditation and experience monastic living.
I saw a few priests with different robes, signifying their rank.
The temple seemed spotlessly clean and has a pebble rock garden that is raked daily in different patterns.

As we got ready to go, a young man sitting by the gate started asking us questions.
We explained that we were walking the pilgrimage, and his first question was, “WHY?!!!”

He has never heard of anyone walking this pilgrimage, but he did know about the famous Shikoku pilgrimage.
Then he said: “Wow, this is SO difficult and tiring.
So, so hard…. do you carry your own camping gear or do you stay in hotels? ”

He then handed Jules a package of bread and a drink, as an Osetai, or a gift you give to pilgrims to help them on their way.
Jules turned to look at me and I told him to refuse.
He bowed politely and refused to take the heavy package.

To show that we appreciated his gesture, Jules gave him one of our Osamafuda, a pilgrim’s slip of paper that is like a business card.

Two hours later, when we were almost down by Hongo Station, the same young man, now on a motorcycle, stopped by me on the road.
He handed me a plastic bag with two ice cold drinks that he had bought for us.
As if by divine guidance, he got us exactly what we like, a lemonade for Jules and an unsweetened green tea for me.

This time I did not refuse his gift.
I looked at him stunned, not knowing how he had found us, accepted his gift and bowed in gratitude.
He wished us strength and said, “Stay strong and do your best!,” and he rode his motorcycle away.

A bit after we left the temple, we stopped in the temple snack shop to have a Matcha green tea before our walk down.
Two women walked into the cafe at the same time.
They also ordered Matcha, and we all sat at the table and chatted.
They asked for our age, do we have any children, where are we from, and what are we doing walking.
They also asked where we have been and where we were going, what temples we have visited and what is next on our route.

A priest drove by in his car.
He saw us in the cafe and he parked his car and came in to chat with us.

He remarked that it is funny that we, as foreigners, were drinking healthy Matcha tea, while he, a Japanese, was drinking black coffee.
He was amazed that we planned to walk the whole pilgrimage and again said that he never heard of anyone who had ever walked the whole route.

The woman who was running the small cafe and shop, told us that she did the Shikoku 88 temple pilgrimage.
She said she did not walk, but drove it.
It took her two weeks, and she was not surprised to hear that it took us two months on foot.
When we left, she filled my hands with packages of green Matcha chocolates, wishing us a safe and good journey.

My feet and knees were achy when we finally made it to Hongo.
Our guesthouse, Hoshino Ryokan, was full of people, many of them workers, not people on vacation.
Beside resting in Hongo after Buttsuji on our way to Hiroshima, there is not much to do in Hongo.

We got the keys to the Ofuru, locked the door and took a bath together.
Dinner was simple but very tasty, and we ate it wearing our Yukatas, in the main dining room with other workers.
It is not a fancy Ryokan guesthouse, but it is much better than the other available accommodation in town, a run down business hotel.

Before bedtime I rubbed my feet and said prayers of gratitude to all the kind people we met today, how kind the people are, and how little I needed to worry about what we would eat or drink.
People showered us with so much, so much more than we could carry….

Love, Blessings and Gratitude to you!
Happy Passover and happy Easter to all!
Tali

Total distance walked on the pilgrimage so far: 221 Kilometers