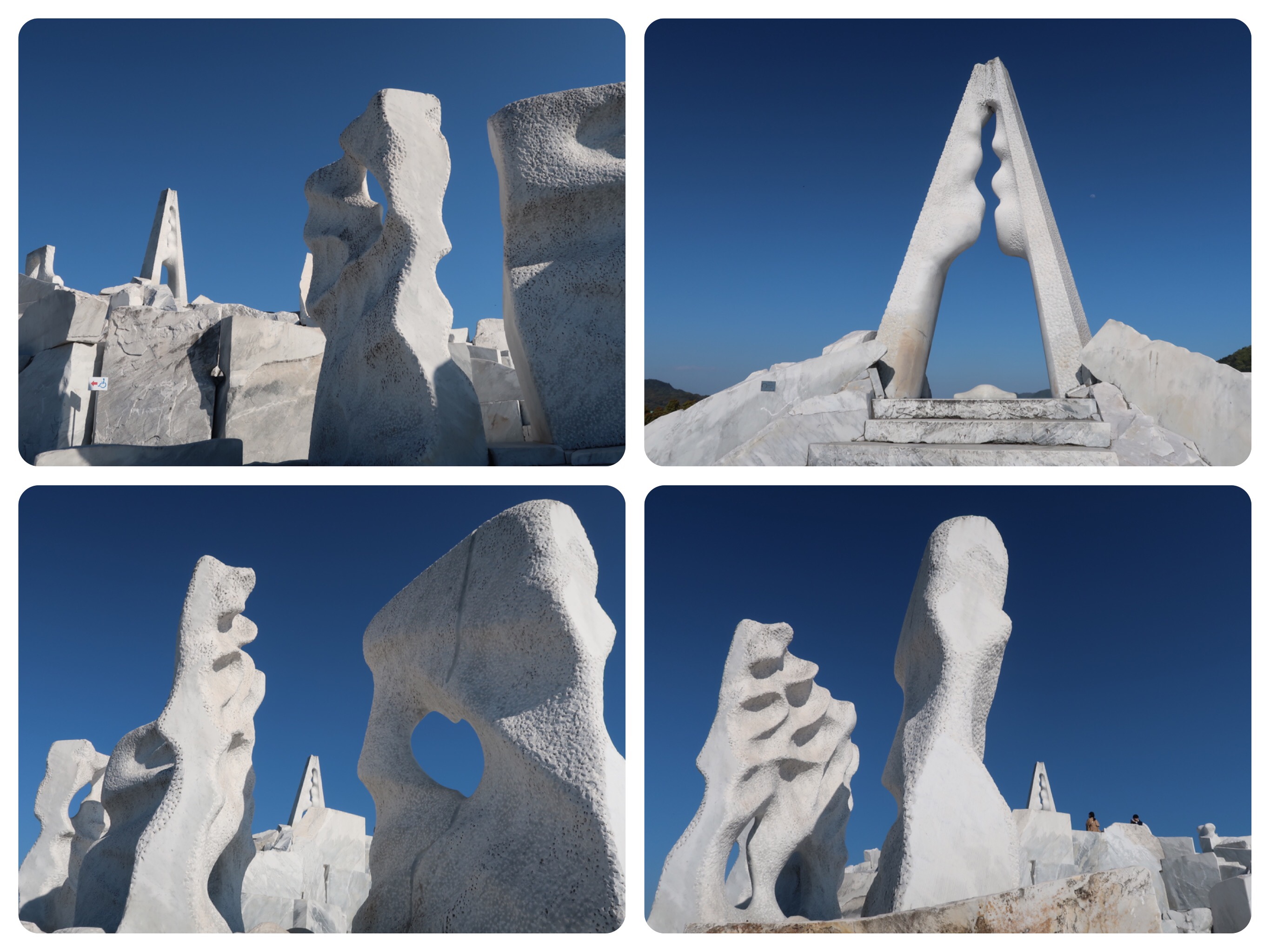 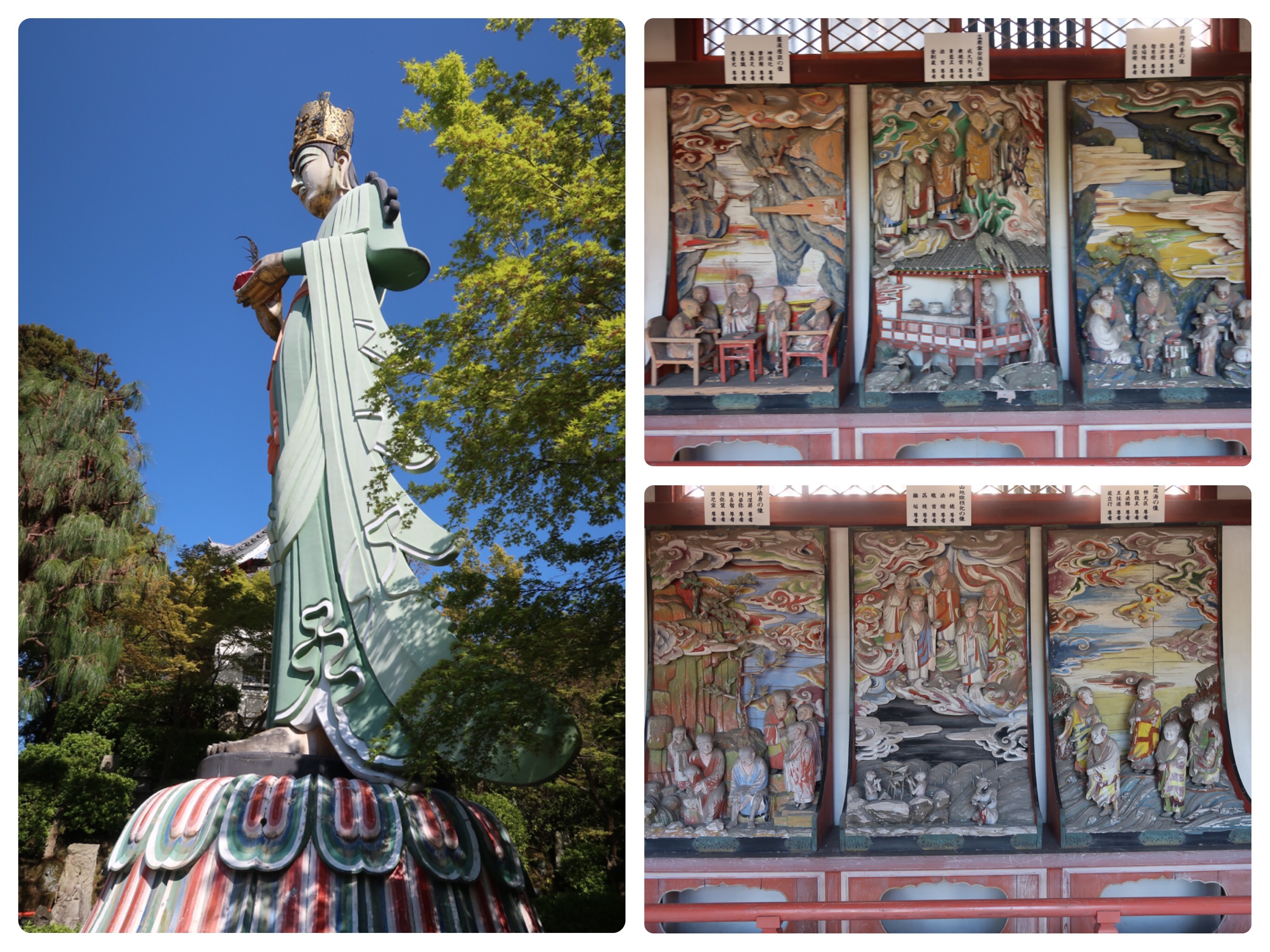 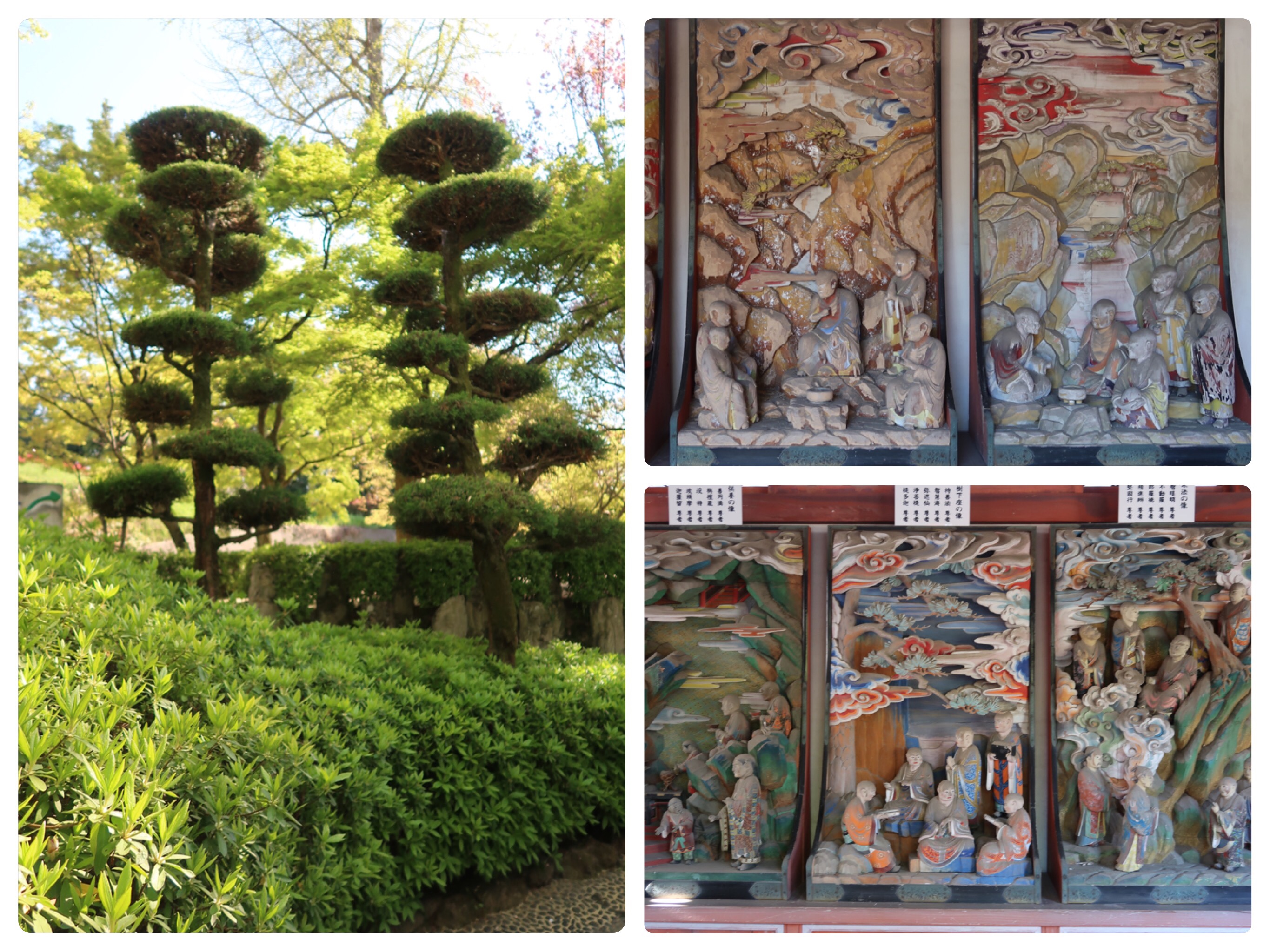 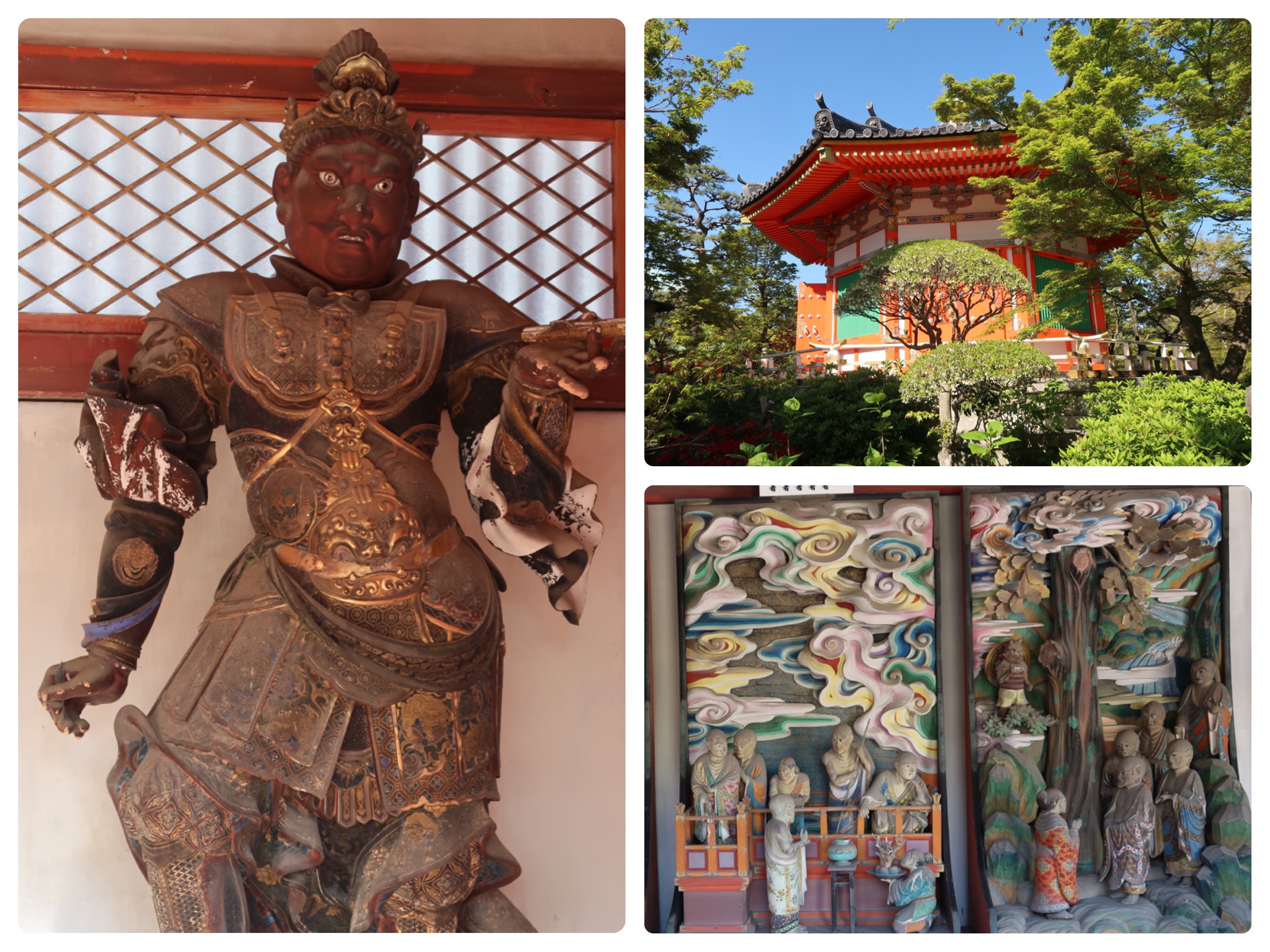 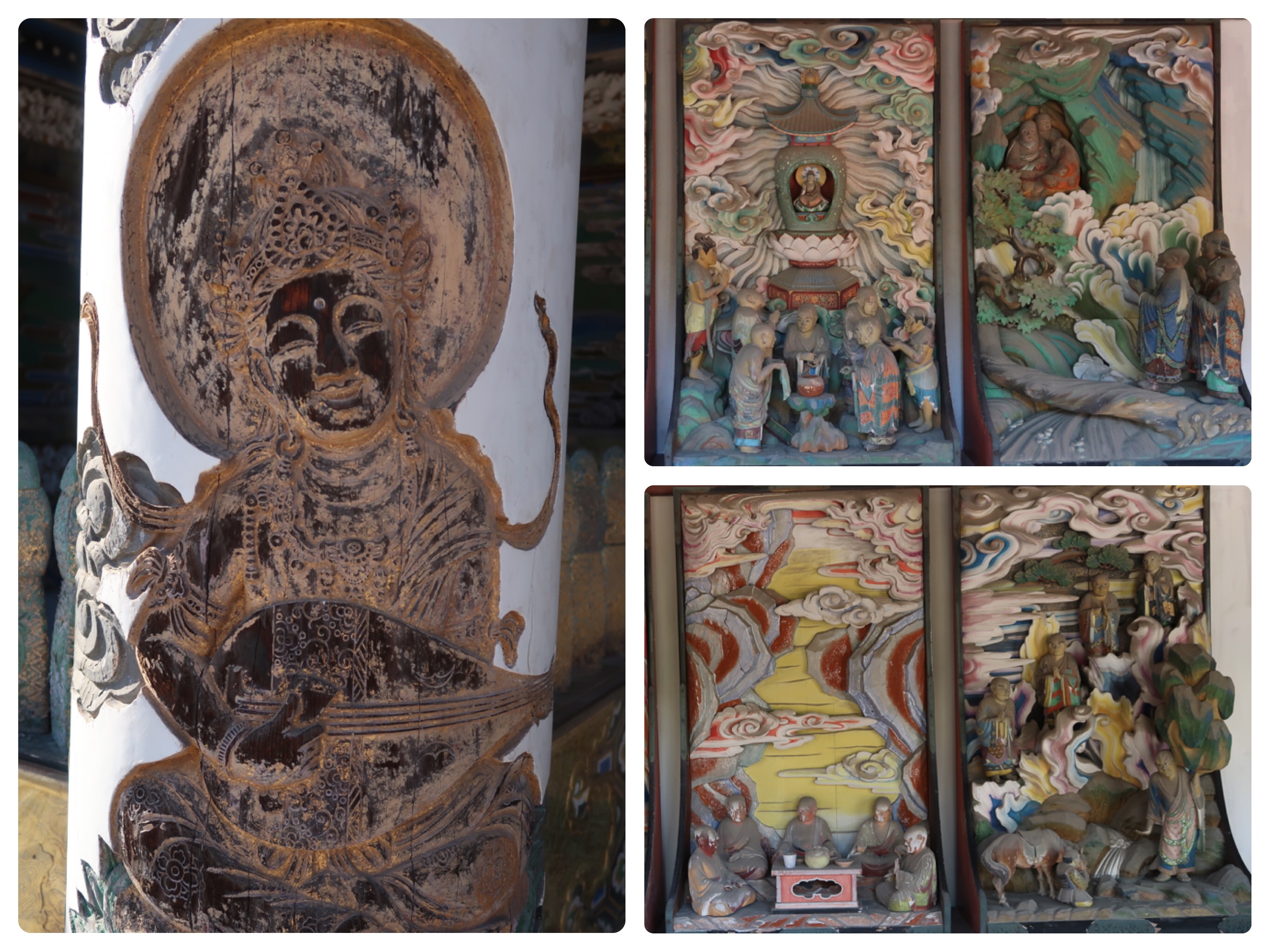 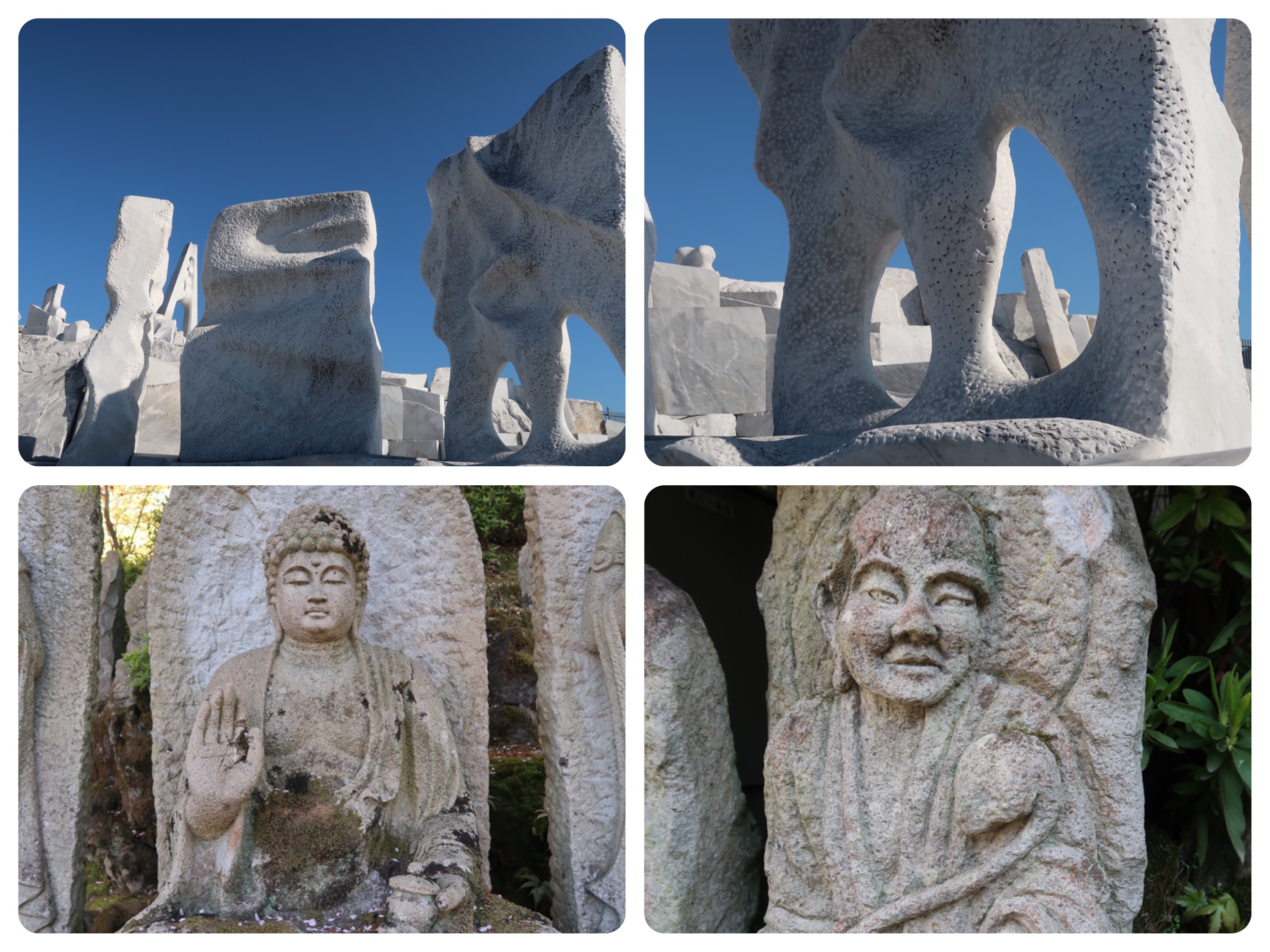 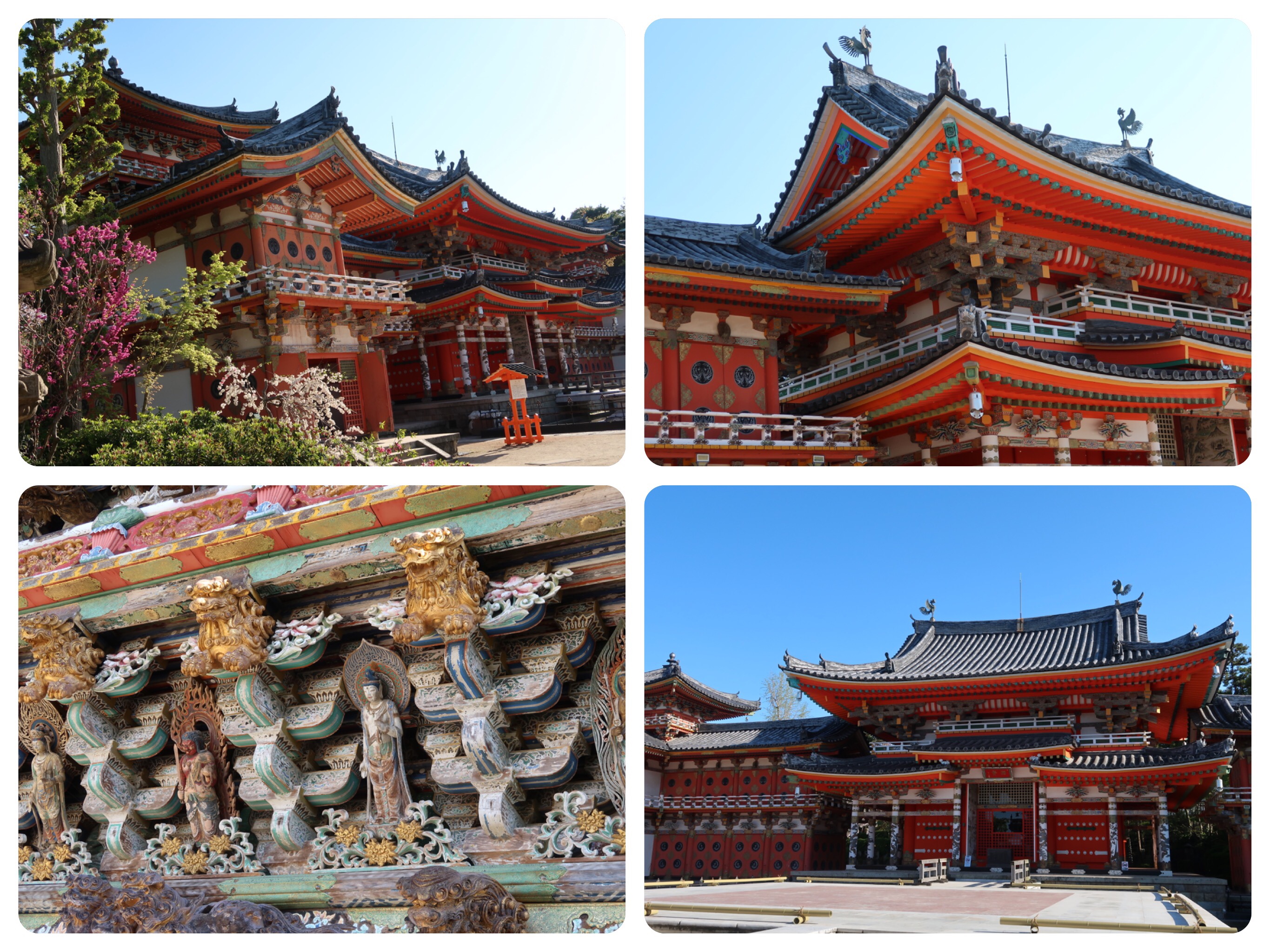 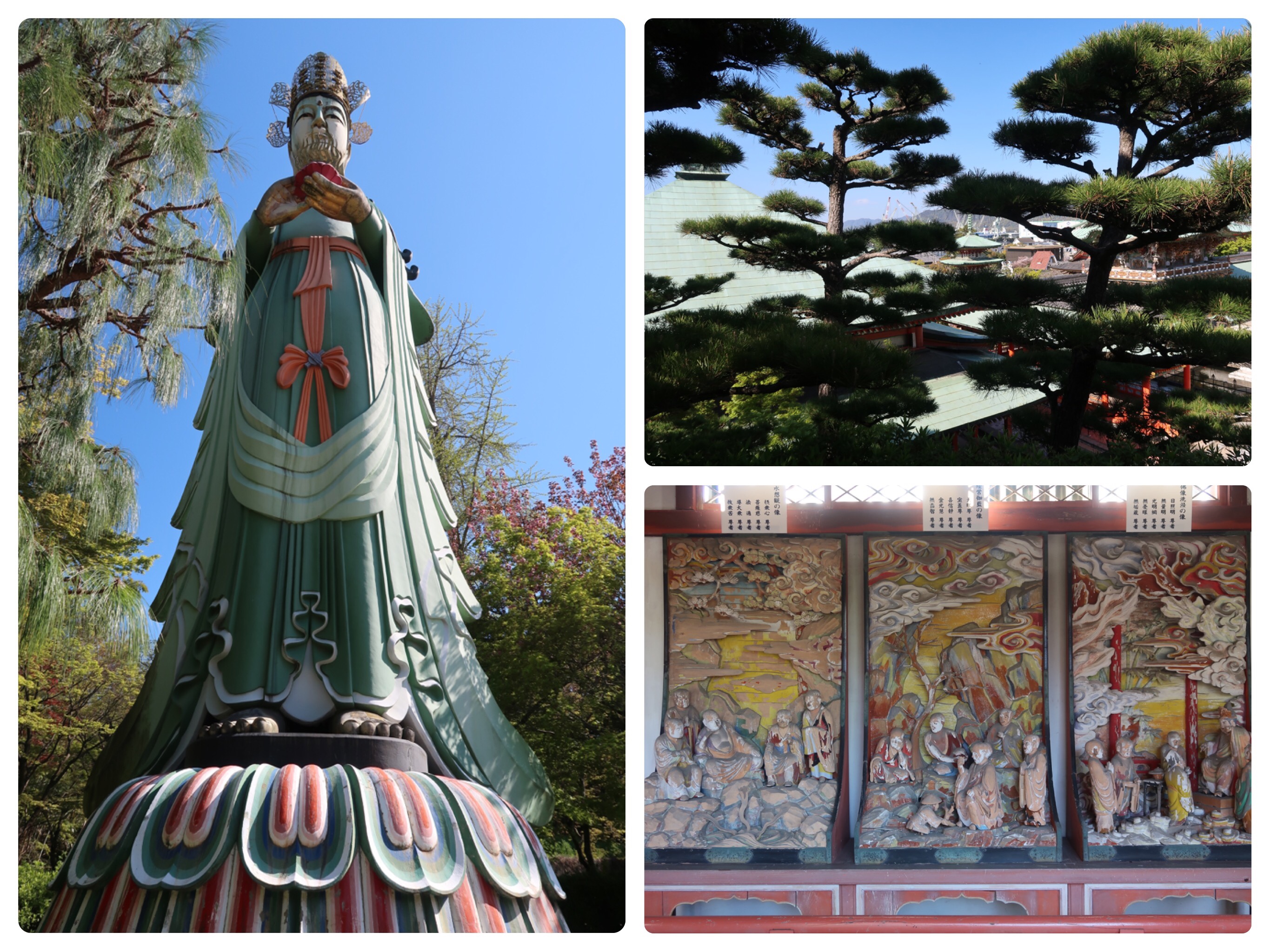 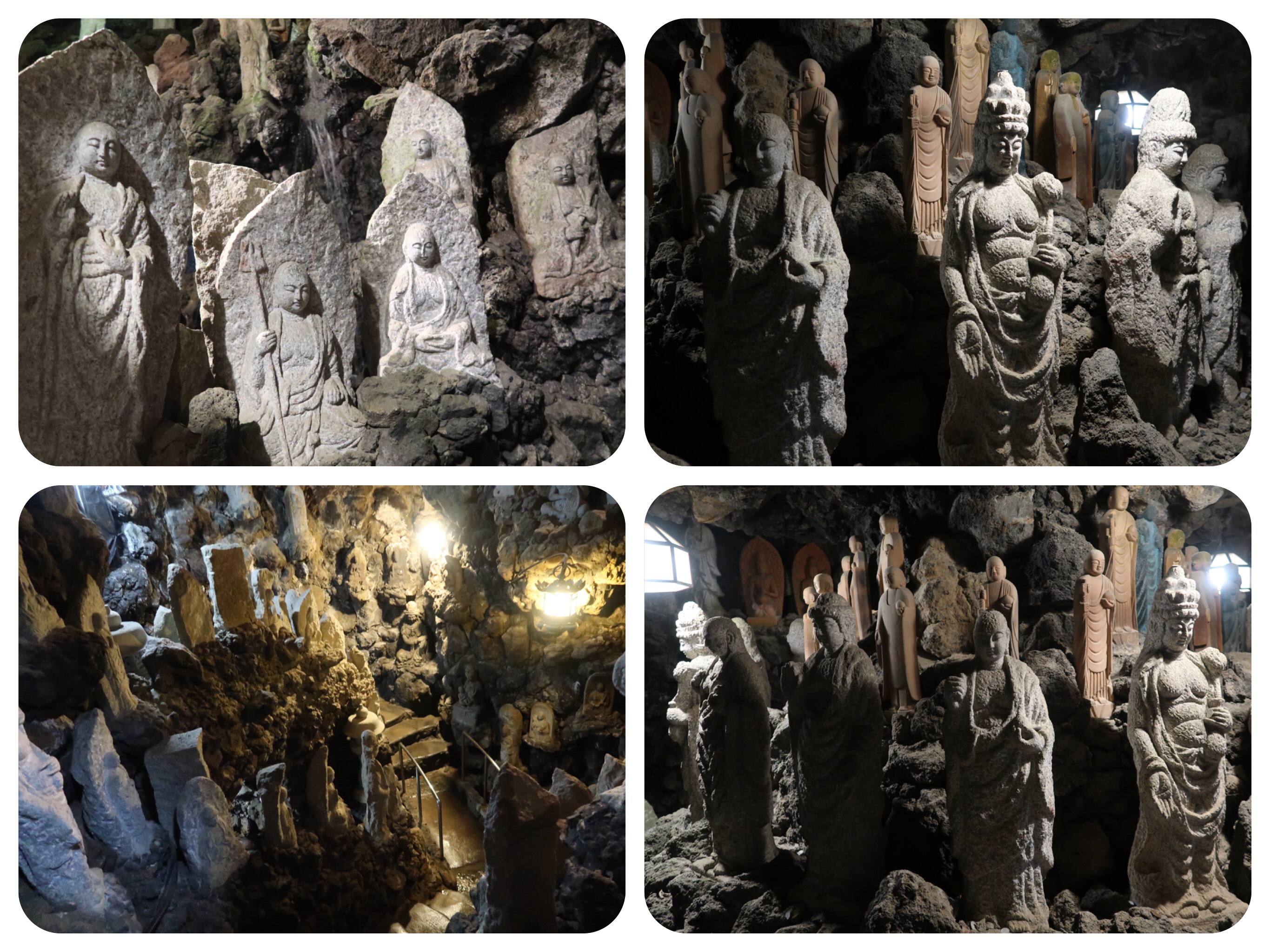 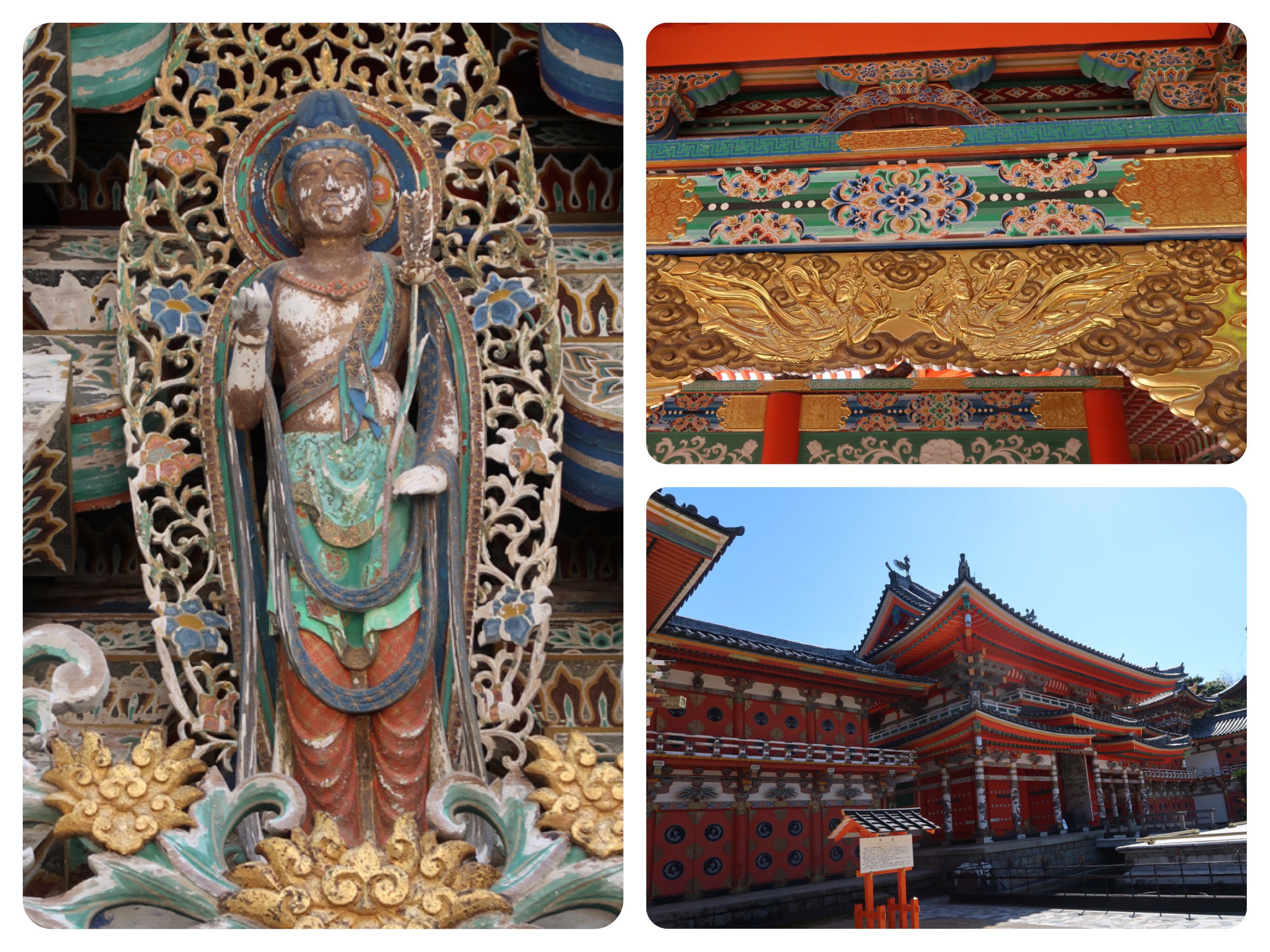 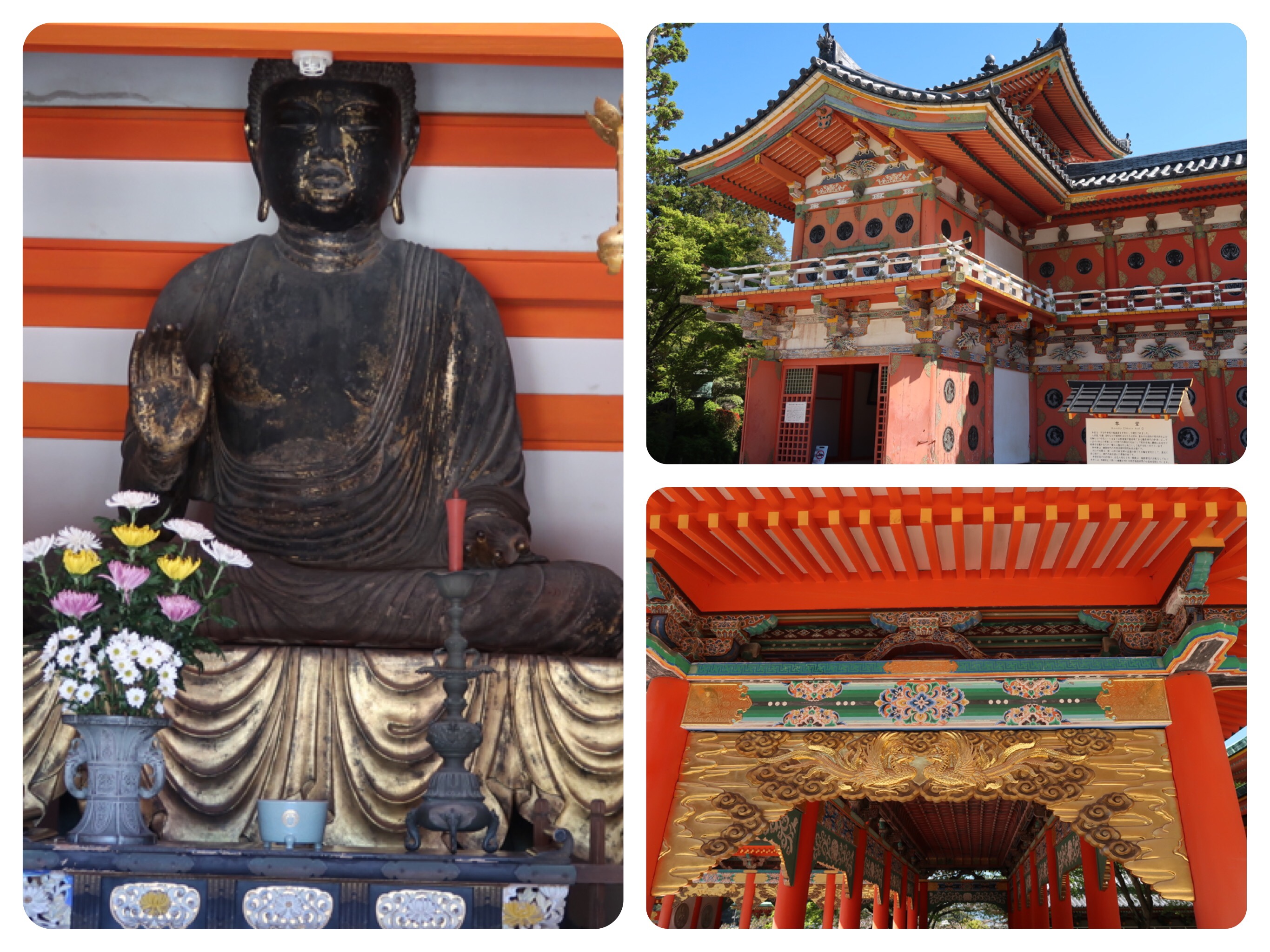 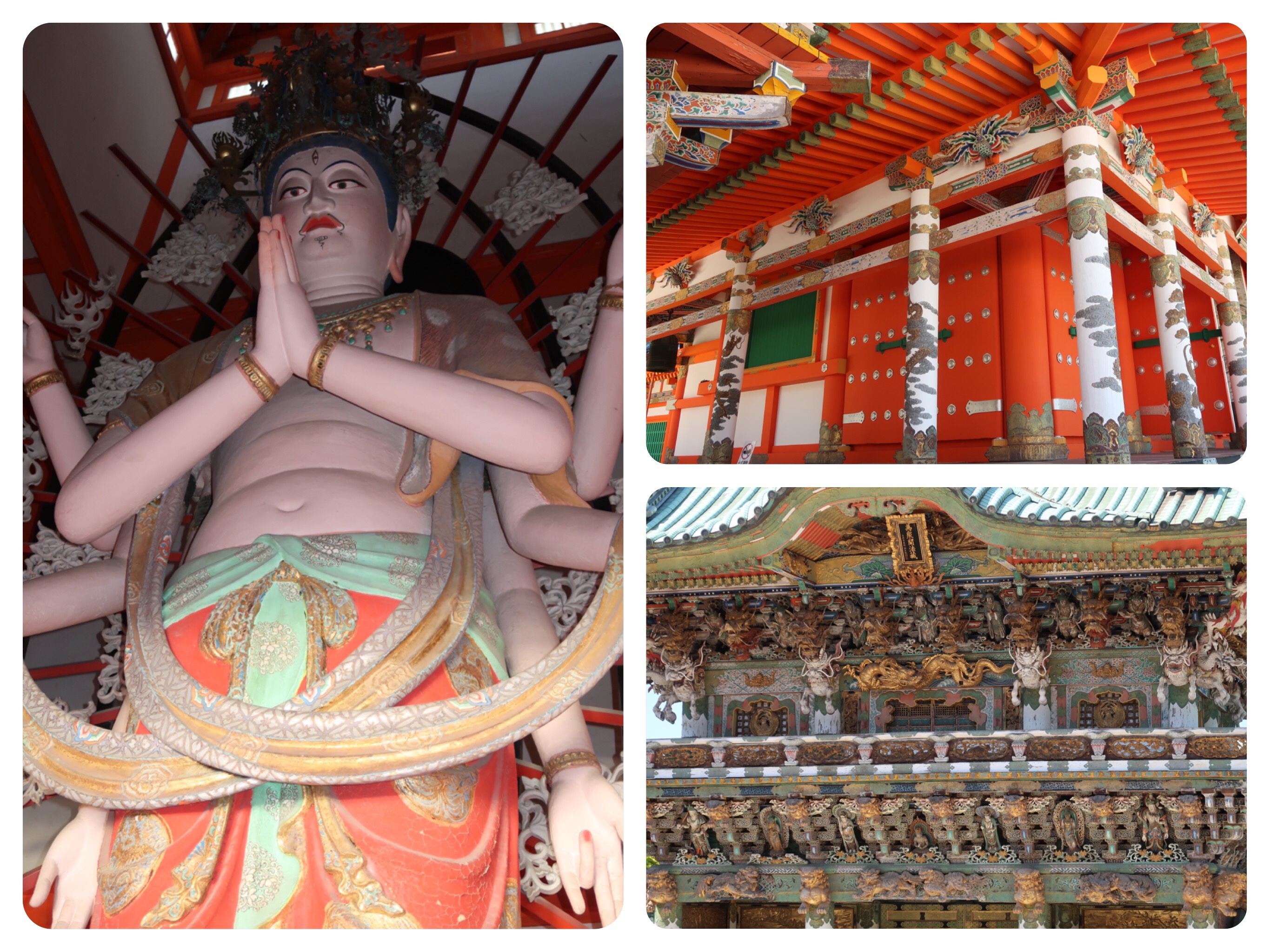 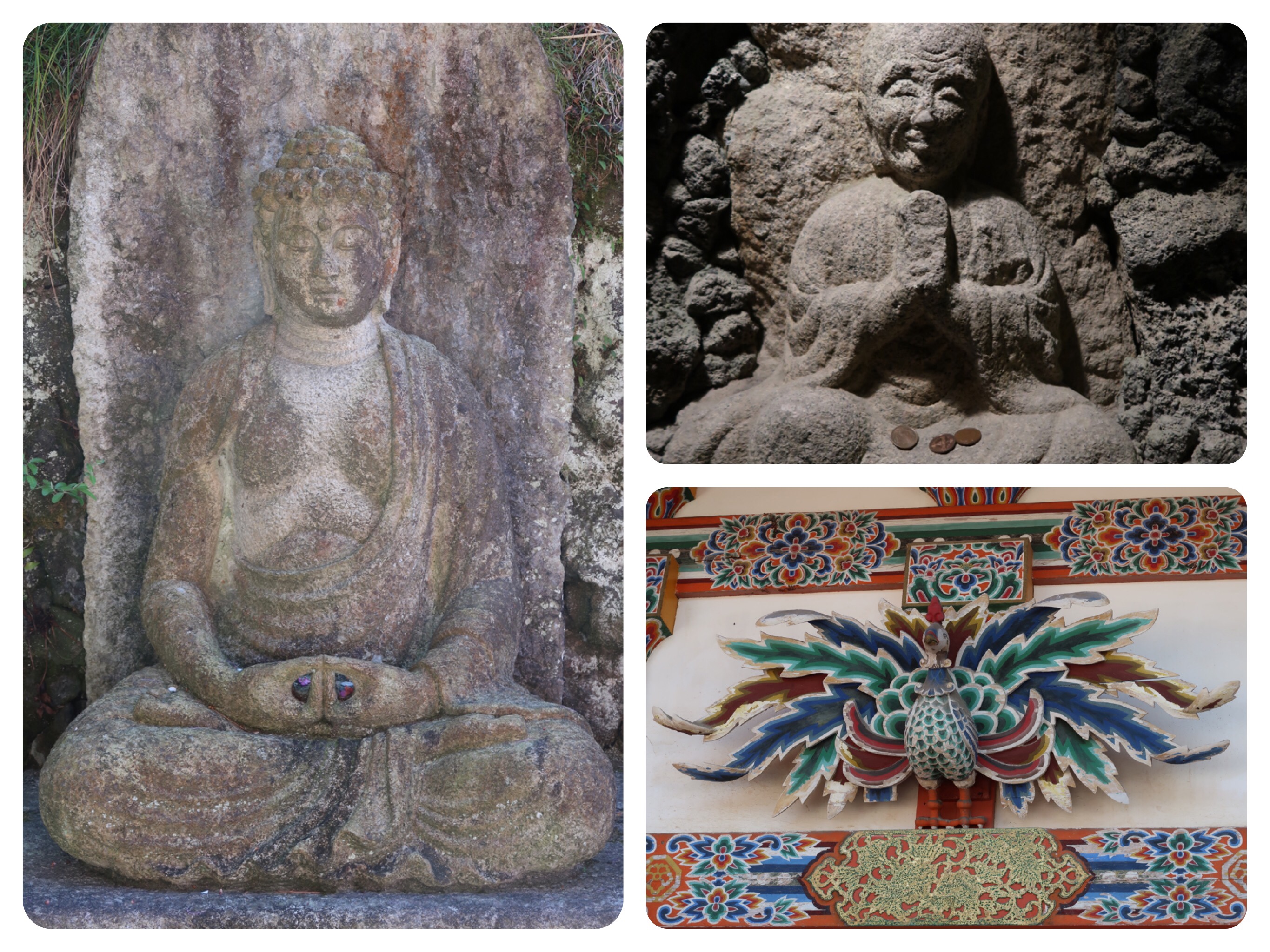 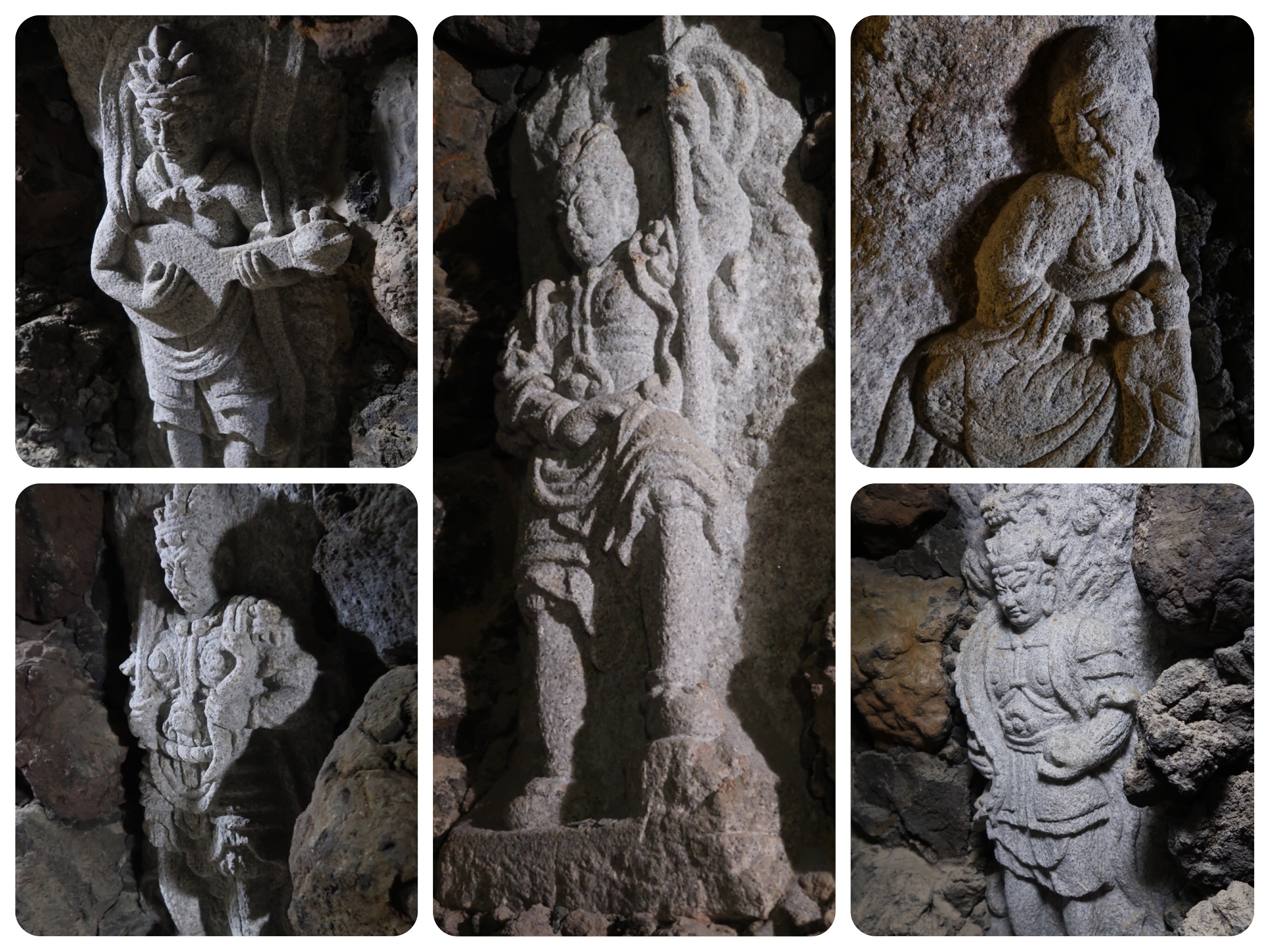 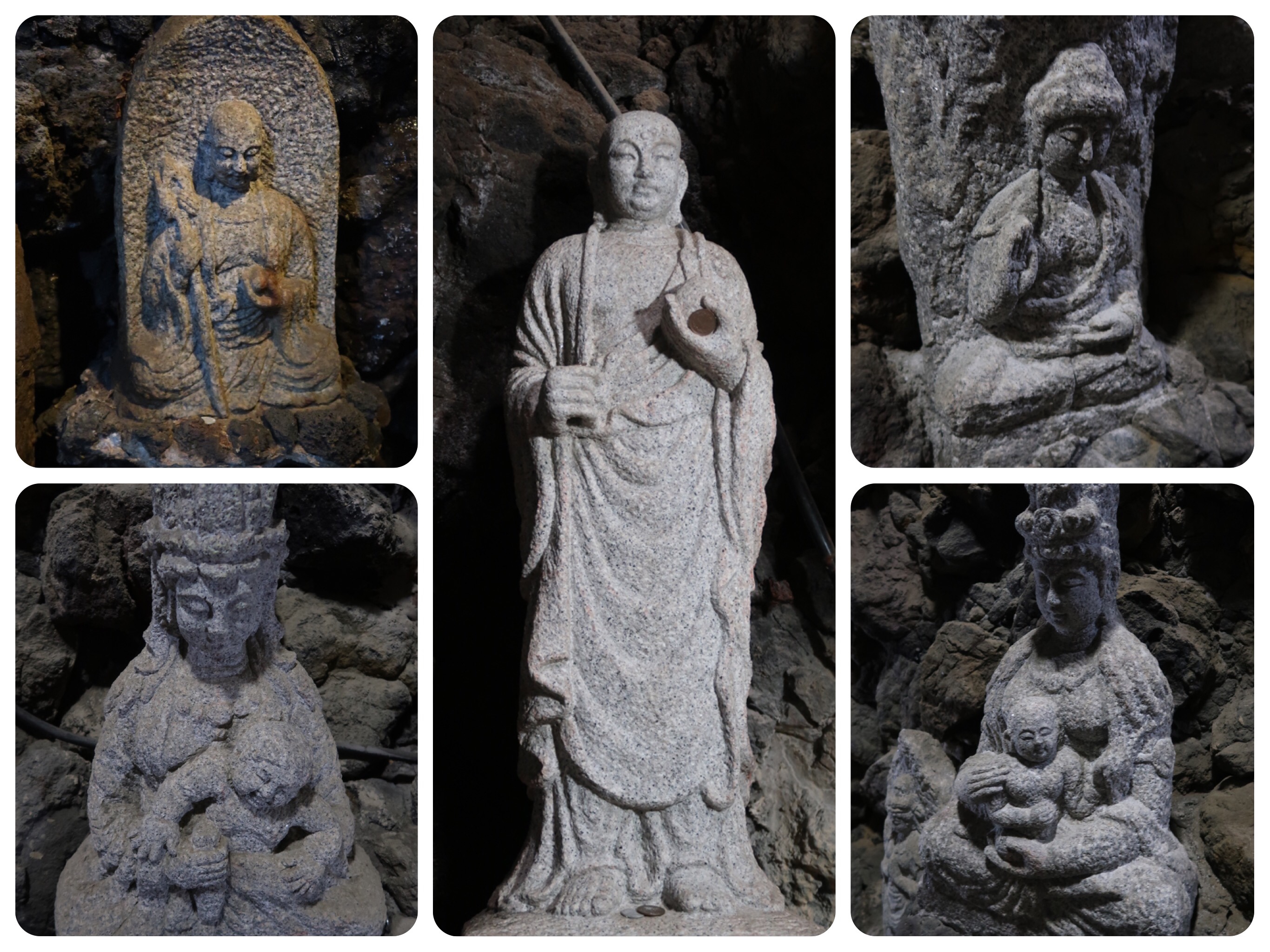 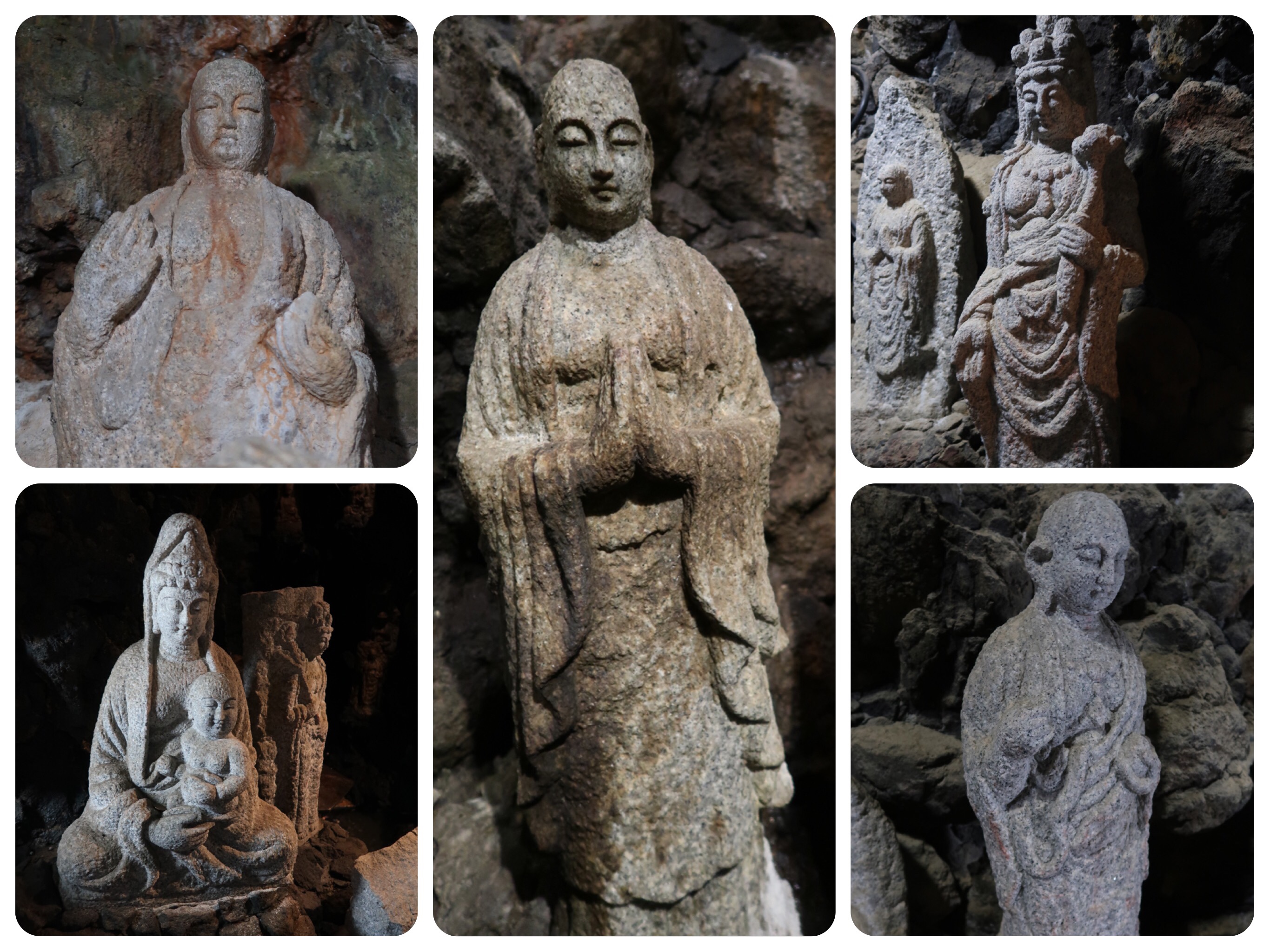 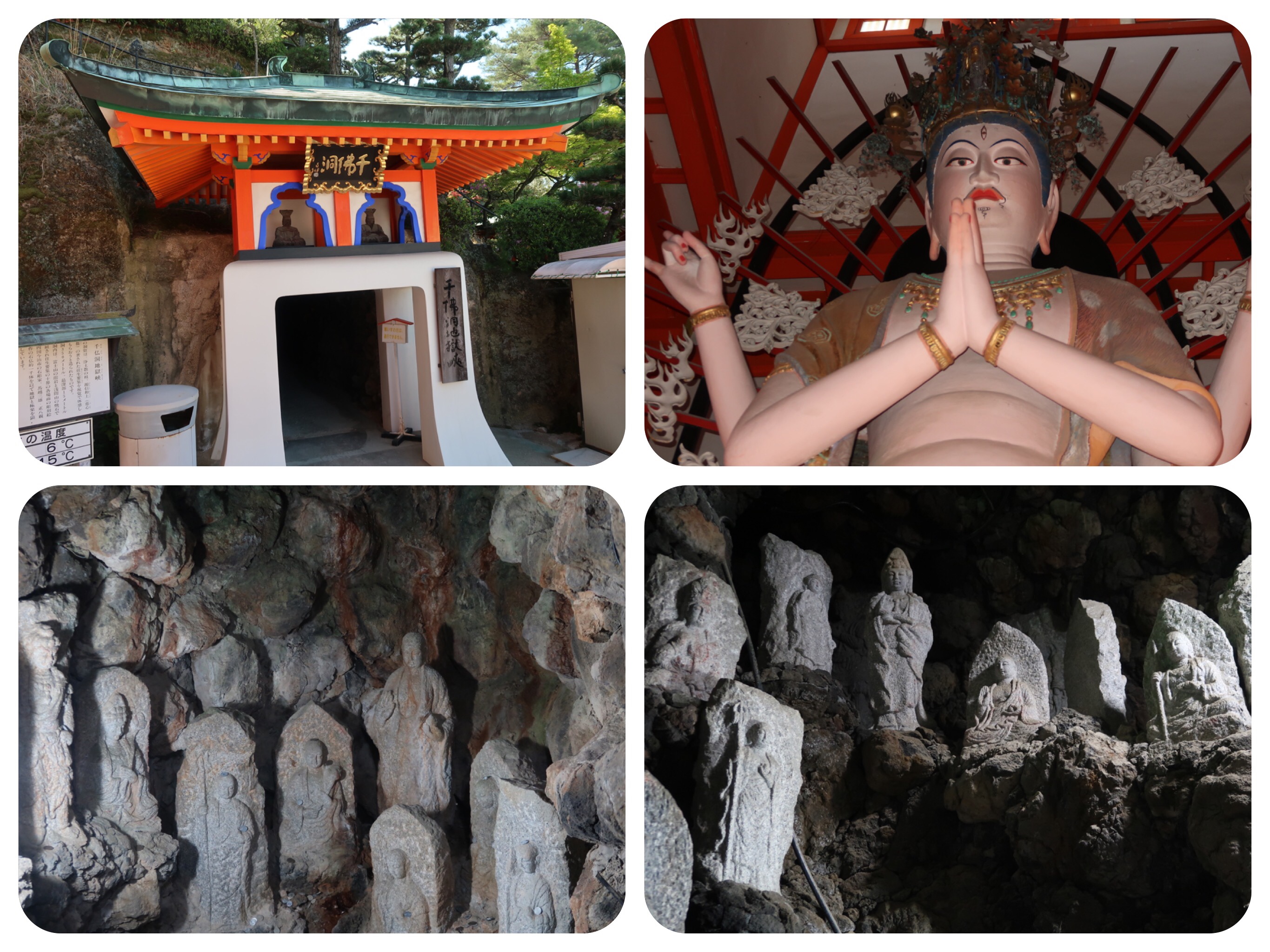 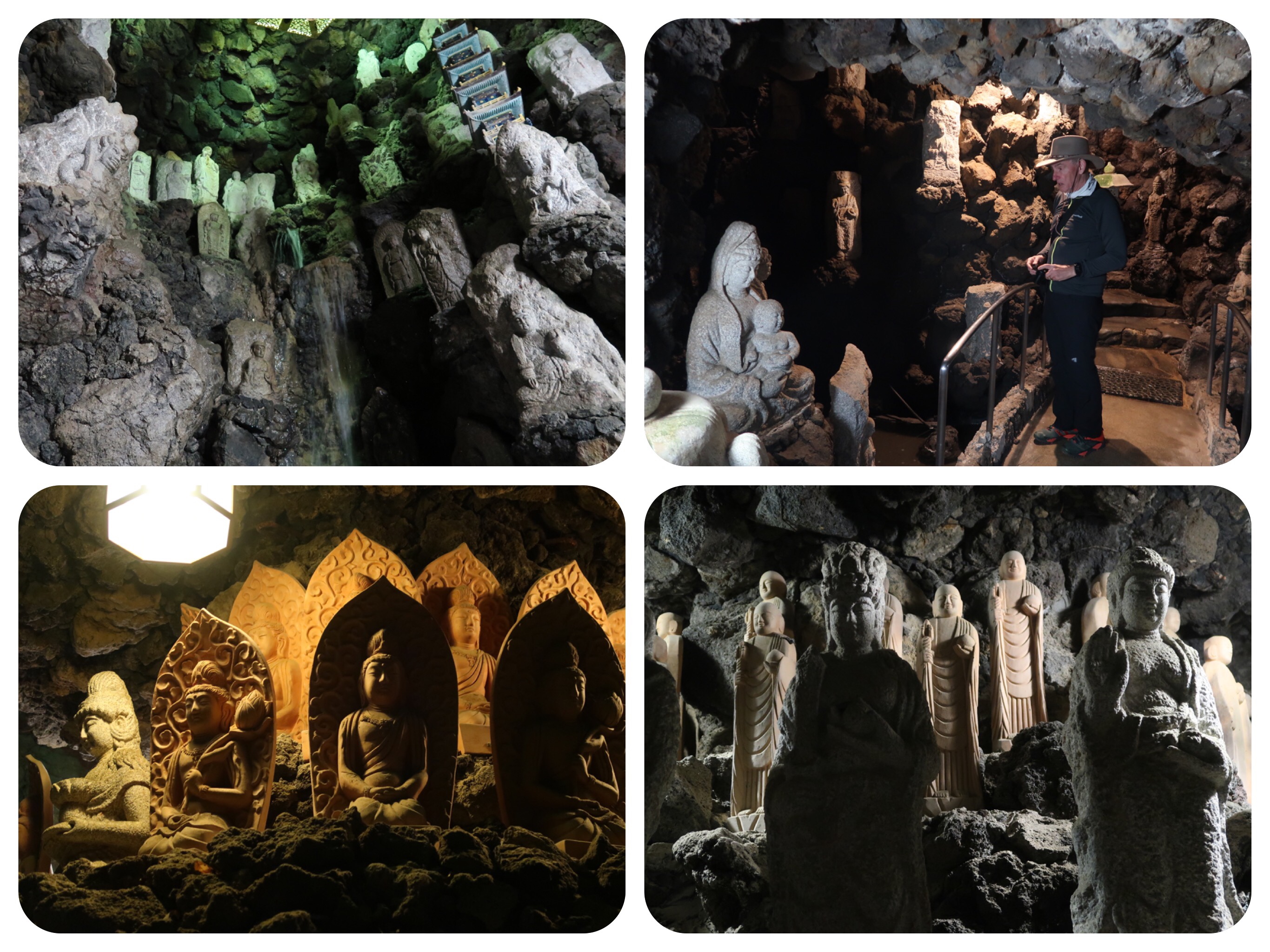 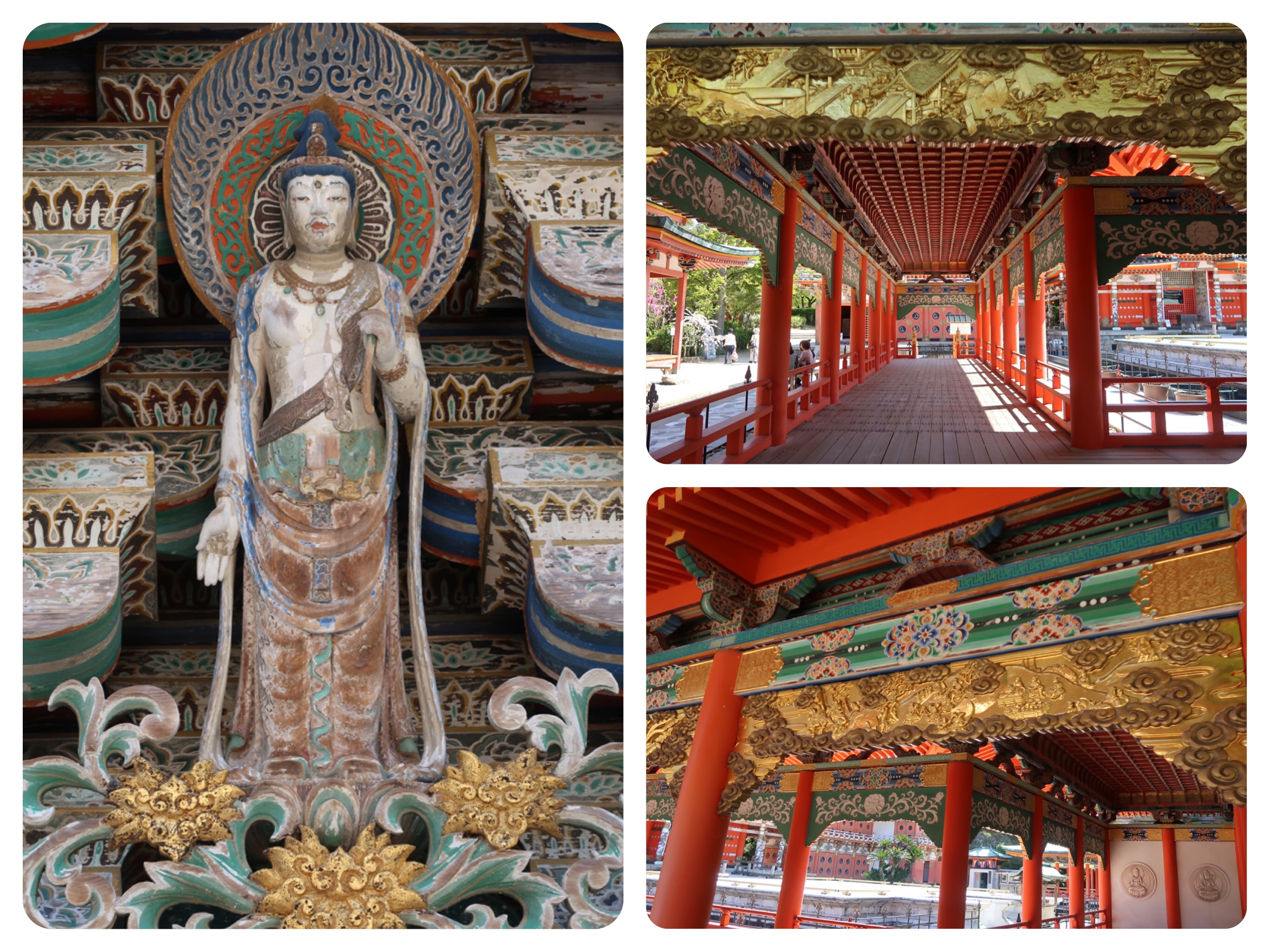 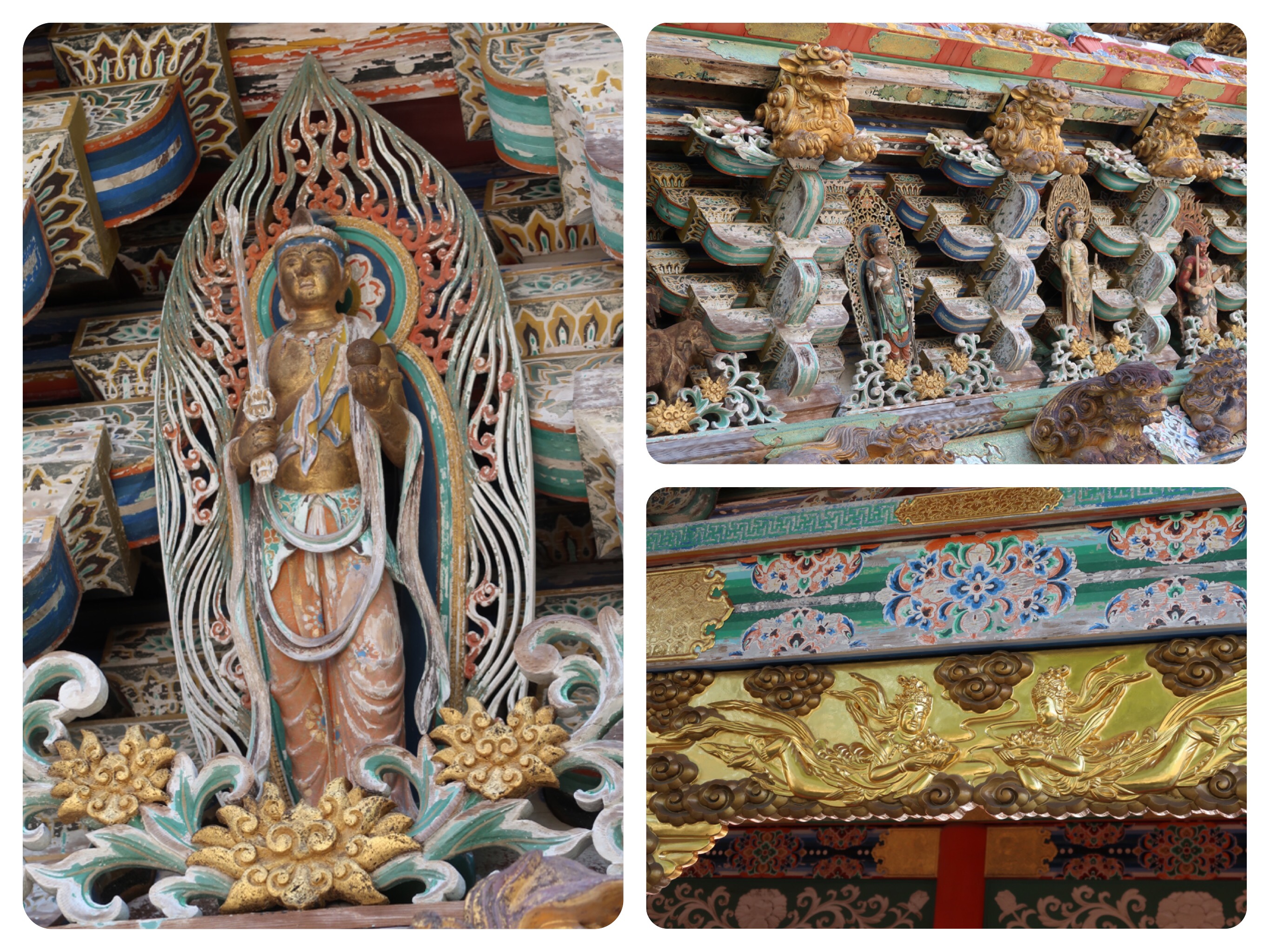 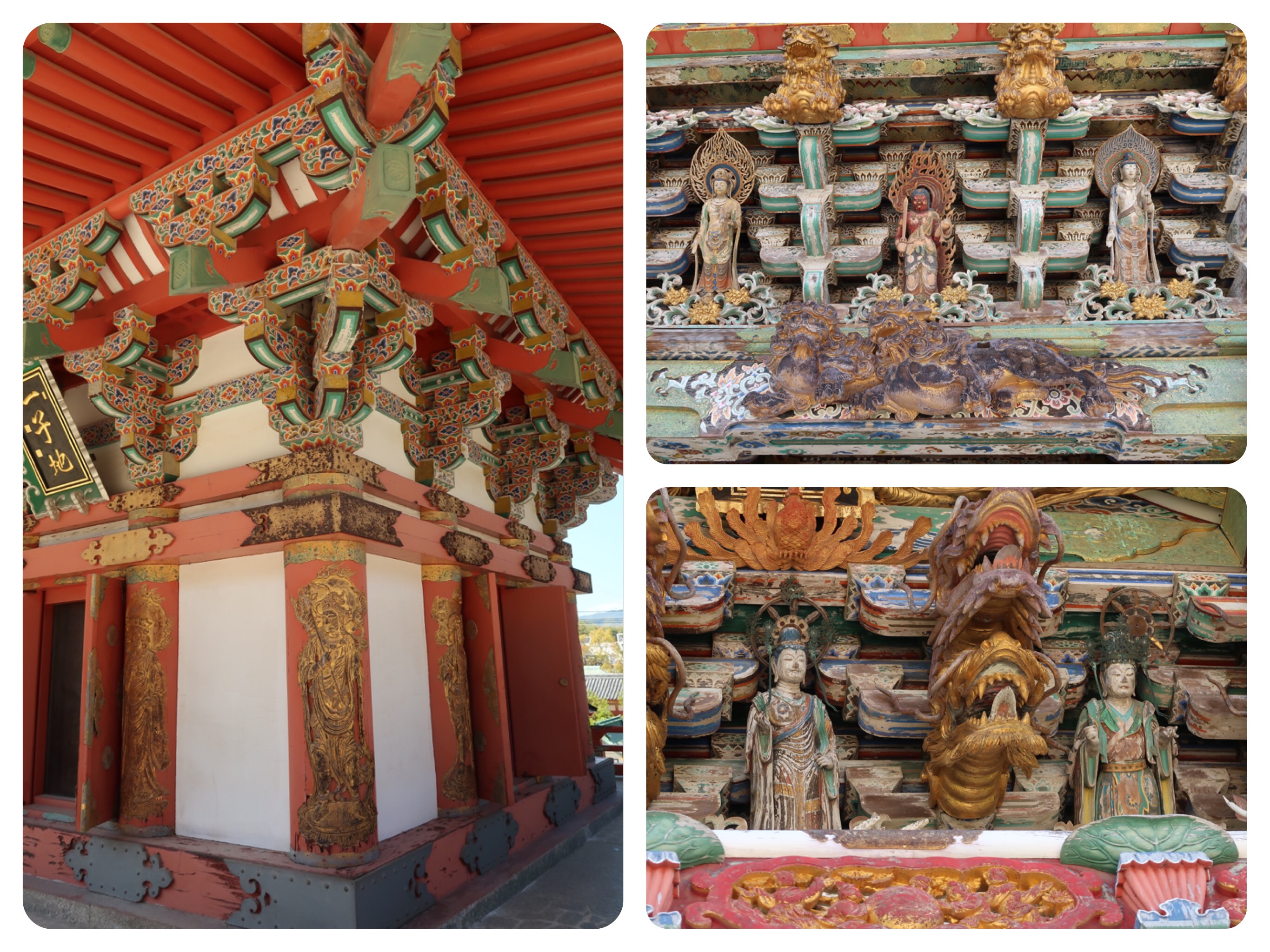 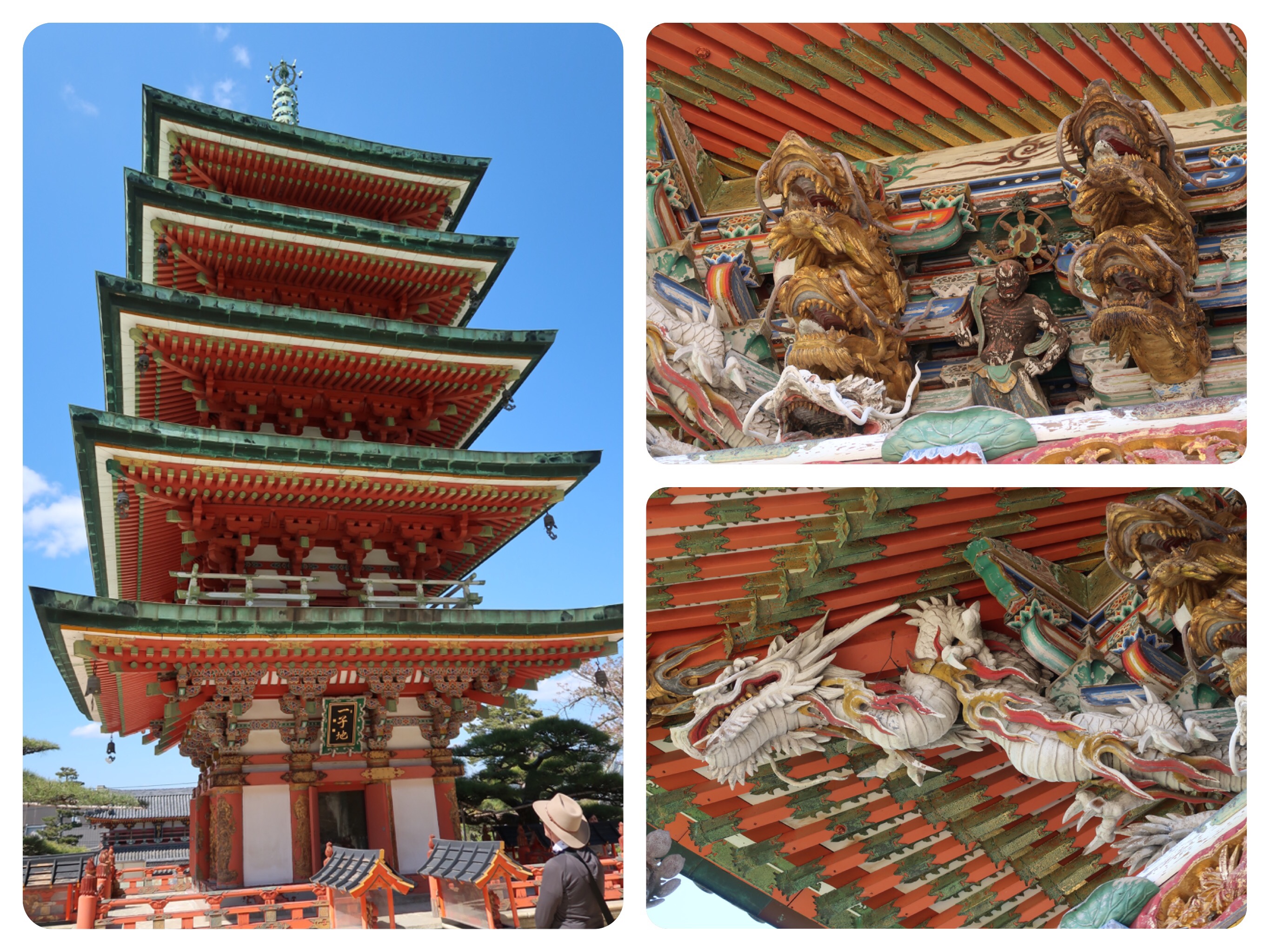 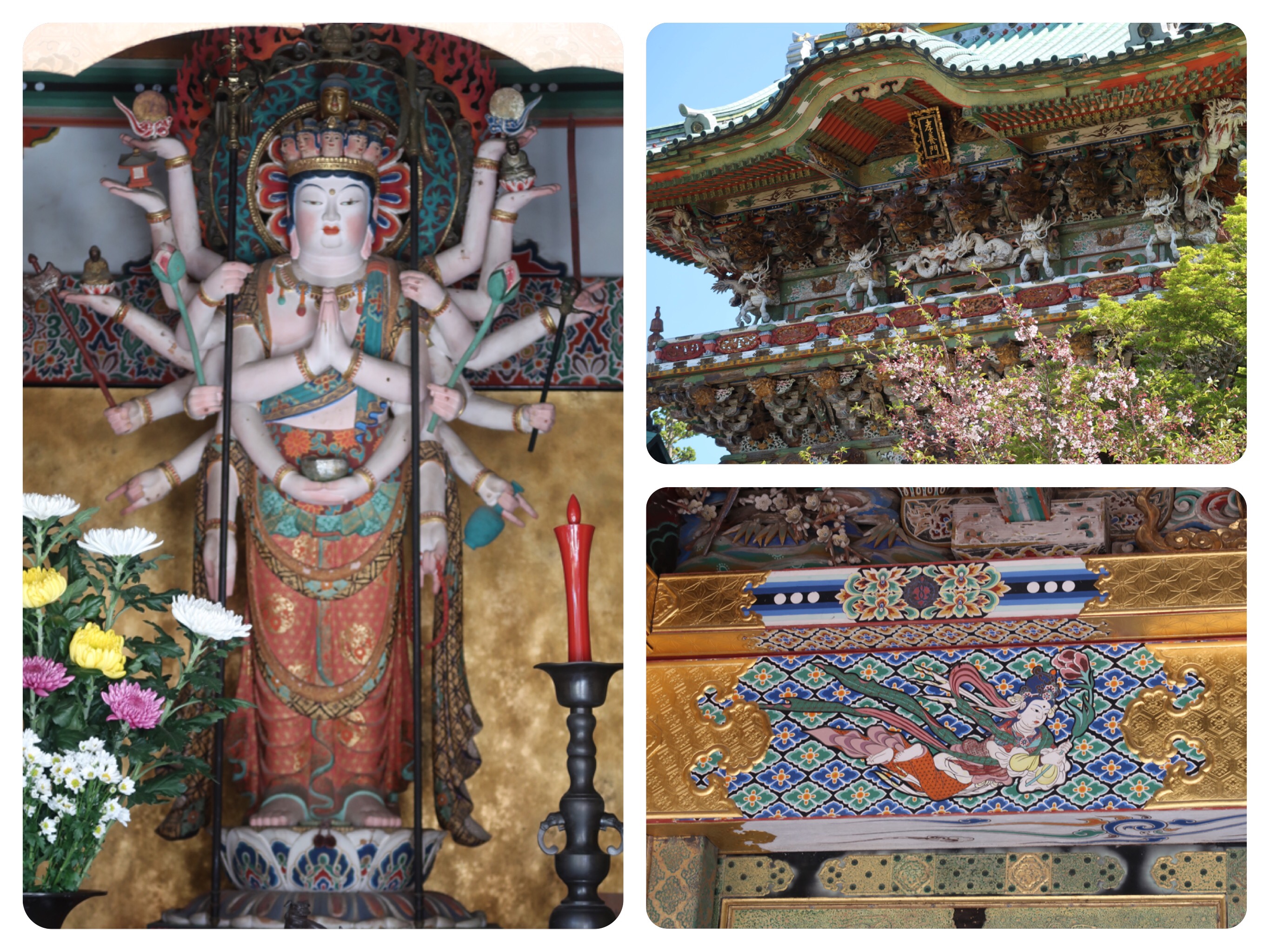 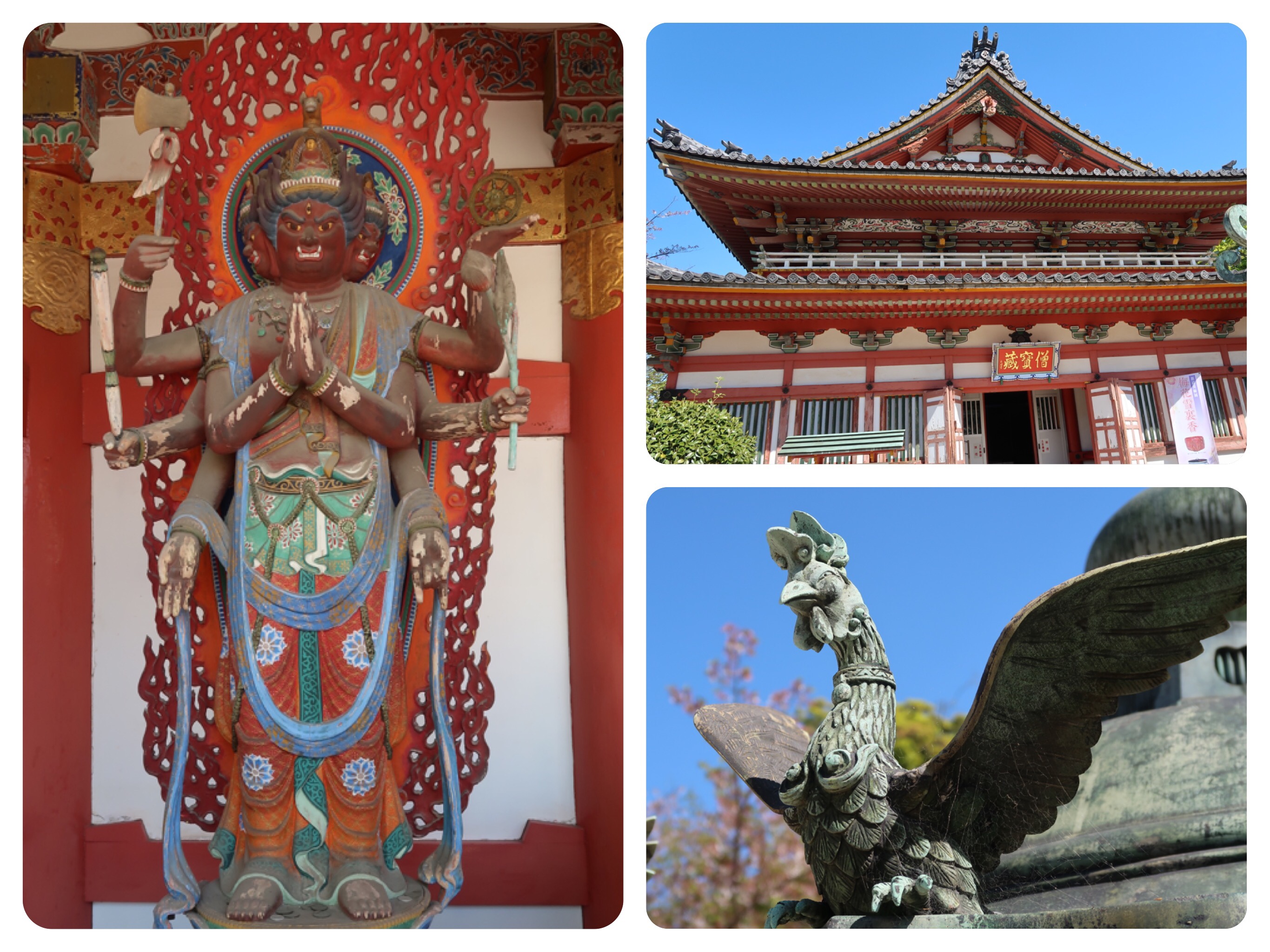 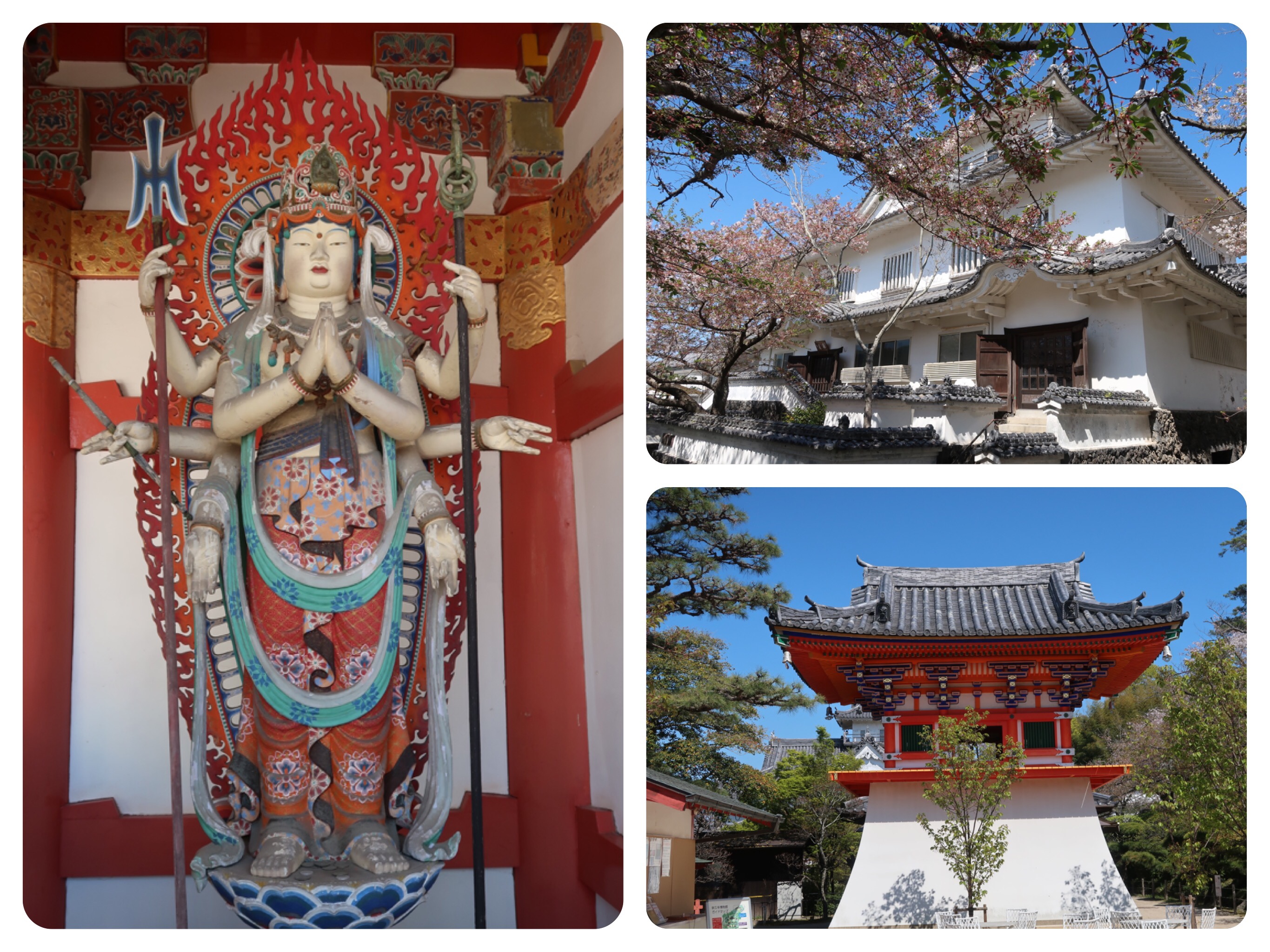 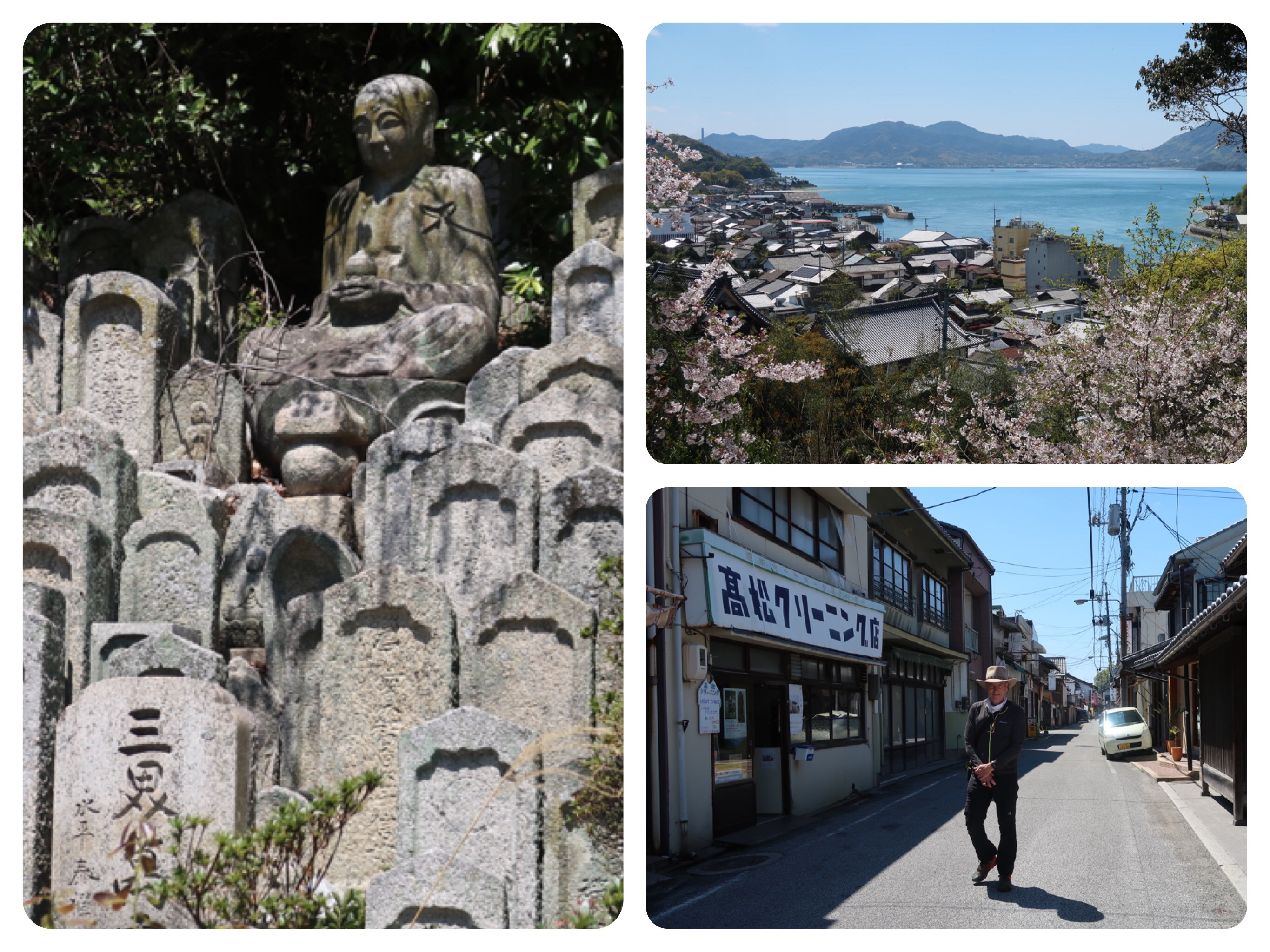 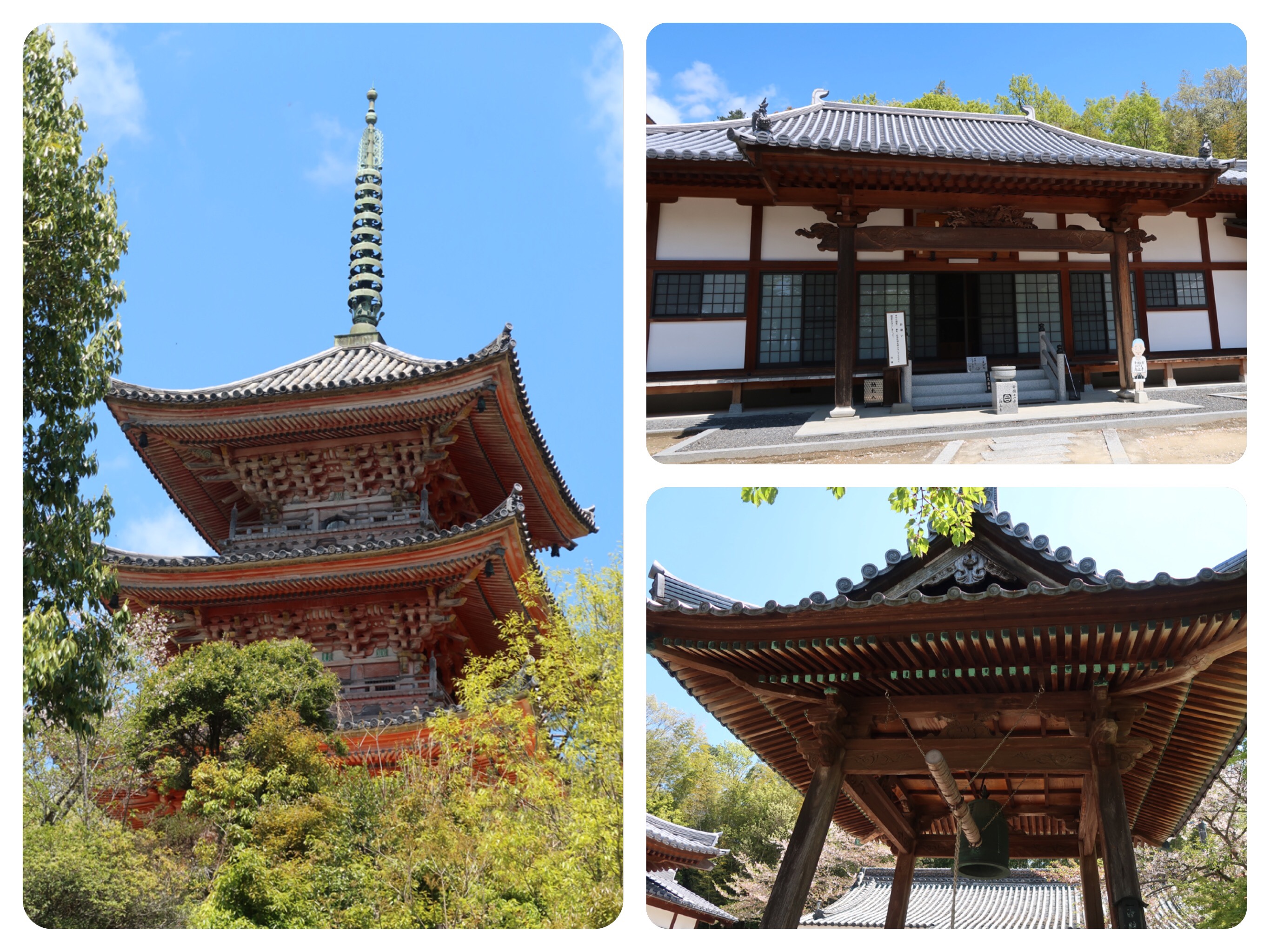 The Shimanami Kaido is a 60 kilometer long toll road that connects Japan’s main island of Honshu to the island of Shikoku.
It passes over six small islands in the Seto Inland Sea, and is a much loved cycling route.

In Onomichi, we saw many people disembarking from the train with their bicycles neatly folded in carrying cases, and then resembling their bicycles by the station.
There are also many speciality hotels catering especially for cyclists, cycle shops, cafes and rental stores.

Before we left Onomichi, I leafed through a brochure that showed the 500 stone Rakans or Arahats, standing on top of a mountain on the nearby island of Innoshima.
They were installed there in a Buddhist temple near the peak, over two hundred years ago.

Since we had walked yesterday the distance from Onomichi to Mihara, today was intended to be a relaxed day of mostly sightseeing.
I thought that maybe we should go to visit Innoshima and see the Arahats before taking the ferry to Ikuchi, where we are staying and where Kojoji, Temple #11, is located.

But at the last minute, we decided to get to Ikuchi early, walk to Kojoji Temple first, and then just walk around the island.
I was not aware that Ikuchi Island has another stunning temple, one that would truly take my breath away.

In Mihara, we had some time before the ferry was leaving, so we sat in a cafe near the port.
A friendly lady came to chat with us.
She asked many questions, and told us about her own life.
When we got ready to leave, she shook our hands, wished us a good journey and gave us lemon candy.

The ferry from Mihara to Ikuchi island, was the oldest and shabbiest I have ever been on in Japan.
I have been on shabby ferries in Thailand, but never in Japan.
The seat covers were dirty and frayed, and the carpeted low ceiling was dripping dirt and dust on our heads.
But we got to Setoda village on Ikuchi island in just thirty minutes.

Ikuchi Island is a small island floating in the scenic Seto Inland Sea.
We left our backpacks in the Ryokan we will be staying in and walked to
Kojoji temple.

On this small island, thre are many shrines and temples that were built as an important part of the sea route dating back to the Heian period.

Kojo-ji Temple is a sacred site dedicated to the Goddess Kannon.
It is not as old as some of the temples we have visited until now, being built in the year 1400.

The temple has been revered as a sacred place since ancient times, as a place to pray for disaster suppression and prosperity.
It is located up a beautiful hill with tall evergreens and flowering cherry trees.

There is an old three-story pagoda with some Chinese influences in the design.

The view of the sea and the nearby islands and bridges is lovely.

After a nice lady stamped our pilgrims’ book, we walked down to enjoy the little village.
Everything being sold in the shops is made with the island’s home-grown lemons.
There were lemon cookies, lemon candy, lemon salt, lemon honey, lemon flavored seaweed and even a lemon flavored Matcha green tea, and a lemon-infused beer.

We had some fresh citrus juice and lunch in a small cafe.
The owner of the cafe told us that she is originally from Osaka, but moved to the island to enjoy a quiet lifestyle.
She introduced us to her fluffy poodle dog named Kombu, and wished us much strength on our pilgrimage.

While not on our pilgrimage list, we stopped to visit the island’s crown jewel, the amazing temple of Kosanji.

This temple is not at all old.
Construction began in 1936, by Kozo Kanemoto, a wealthy industrialist and owner of a steel-tubing manufacturing plant, as a tribute to his mother.
The Chinese influenced architecture of the temple, is a devotional act dedicated to his mother. Construction continued for another thirty years.

After Kanemoto’s mother passed away, he gave up the presidency of his company and became a priest.
He grew his hair long, retreated into hermetic silence then emerged to start building this monumental work of art, Kosanji temple.

I would like to mention, that I often wondered why this region of Japan is called Chugoku.
Chugoku in Japanese, means China.
Not the ceramic, but the country of China.

Along this pilgrimage on the China Road of Japan, we saw a few temples whose main halls and pagodas had strong Chinese influences.
But nothing rivals Kosanji.
The artistry and harmony of the entire temple complex really blew my mind.

Kosanji Temple has thousands of statues, most of them of female deities such as Benzaiten, goddess of music and the arts, and of course Kannon, a reincarnation of Quan-yin or the Goddess of Mercy, compassion and eternal Love.

After roaming around the temple with my mouth open in awe, we entered a cave complex with enormous rocks full of Buddhist statuary.
We crossed bridges and climbed up and down inside the cave, admiring the many figures of Goddesses, Bodhisattvas and Avatars.

At the top of the temple complex, there is a brilliantly white park of hope.
300 tons of white Carrera marble were imported from Italy, and an
Italian artist was commissioned to create a stunning white landscape with contemporary abstract sculptures that resemble walking on a glacier.

All the temple’s columns and gates, are carved and colorfully painted with flying dragons, seated bodhisattvas, deer, foxes, cranes and goddesses mounted on elephants.
There are birds and white and rare blue lotuses.

But for me, the 500 Rakan (Arahats) hall, extending on both sides of the entrance gate, was my greatest inspiration.
Those were not paintings, but 101 wooden sculptures, each containing five Arahats, designed to look like long scrolls.

While dusty and in need of better upkeep, they were truly a work of magnificent art.

We stayed until closing time, taking as many photos as we could until I depleted my camera’s battery.

Back in our guest house, I showered and soaked in a lemon hot bath.
I squeezed the lemon slices on my face and hair.
I also chatted with a lovely old lady from Kagoshima, who like me, was surprised to find that everything is lemony on this island.

After the bath, we dressed and went in search of a good place to eat.
We ate a very good dinner at a quiet restaurant at the edge of town.
I ate a roasted eel on rice with soup, seaweed and pickles.
Jules ate a soba noodle set with soup, pickles and tempura.

We did not expect to get such a good meal at a nearly empty, dark restaurant.
We decided that the reason the food was so good, was because this was a family restaurant, run by a husband and wife and their high school daughter.
It was not a commercial enterprise, run with indifferent employees.
This was this family’s lifelong pride.
They know the traditional food they make, and they take pride in making it well.

Total distance walked on the pilgrimage so far: 194 Kilometers

Accommodation: Tsutsui Ryokan, right next to the ferry.
They offer humble Japanese style rooms, a small hot spring bath, and meals, but we only ate their breakfast.