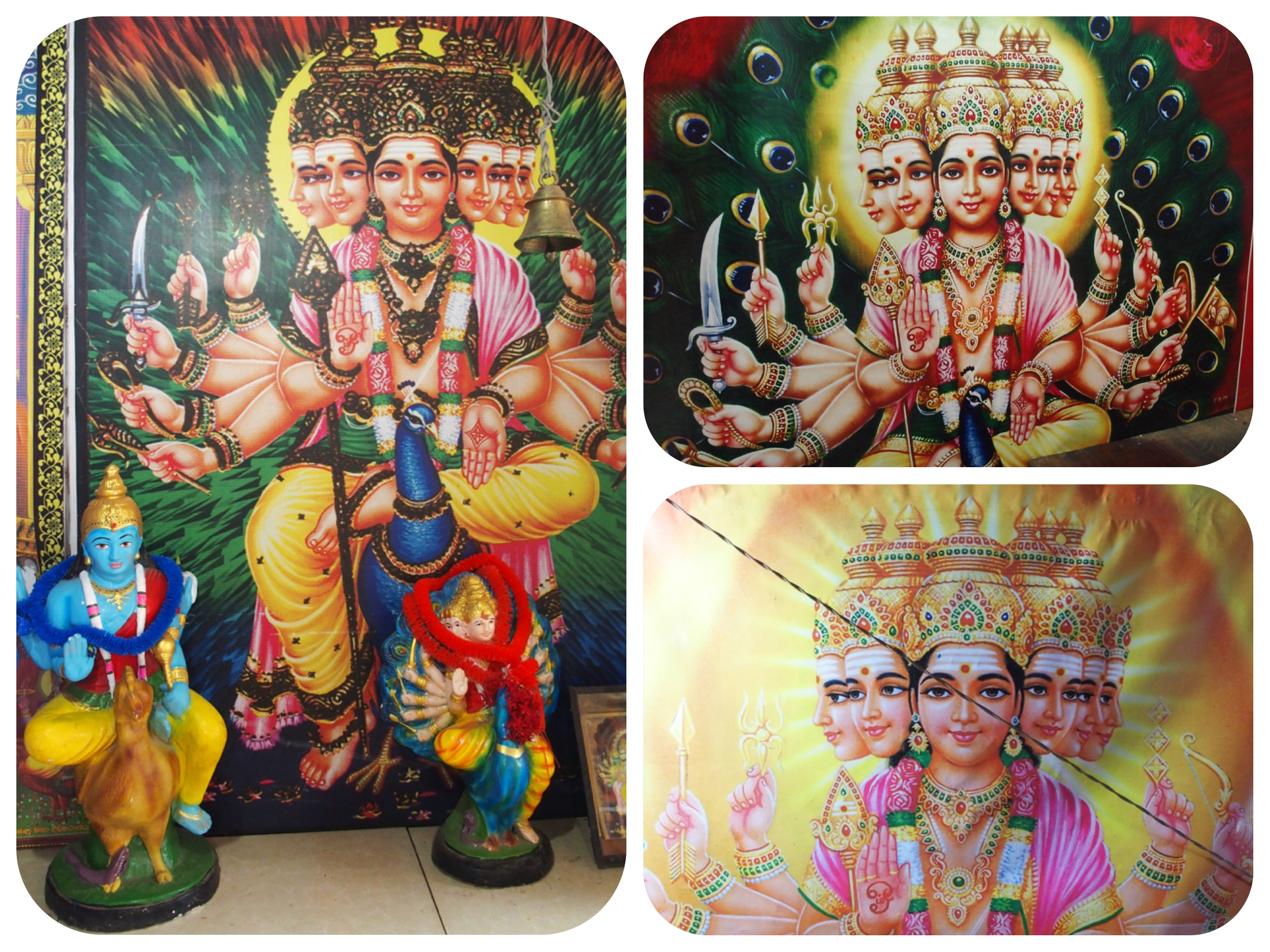 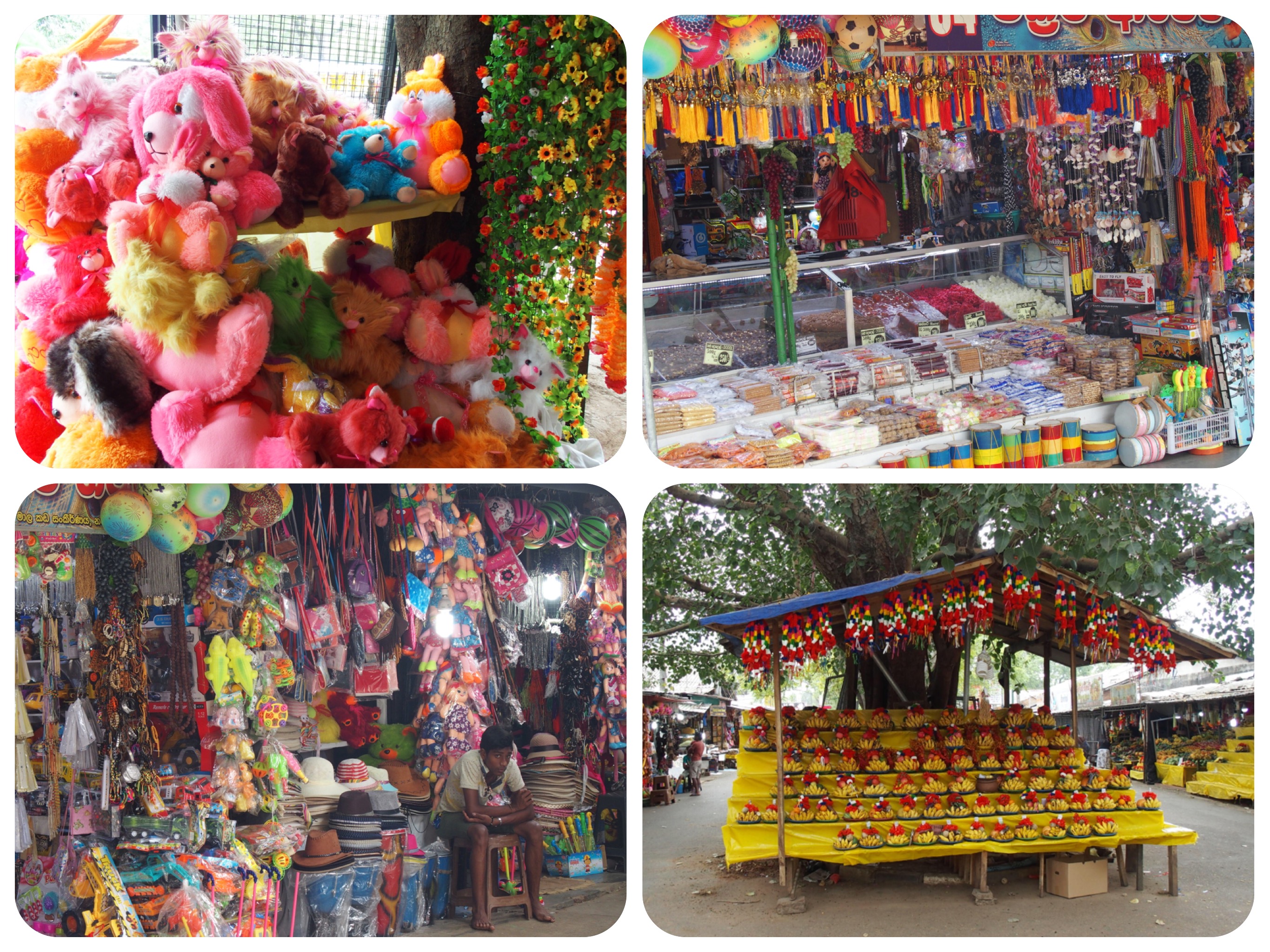 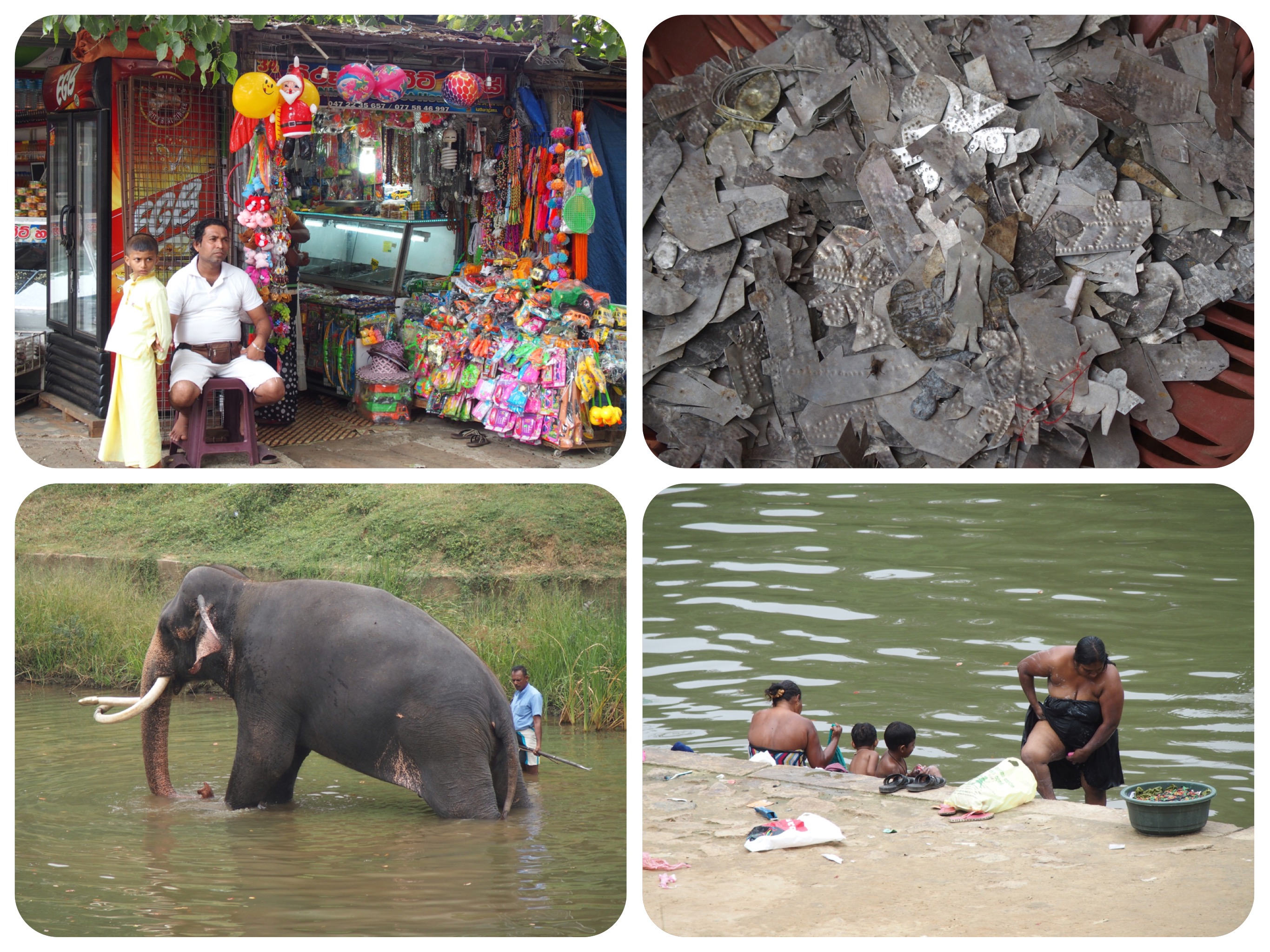 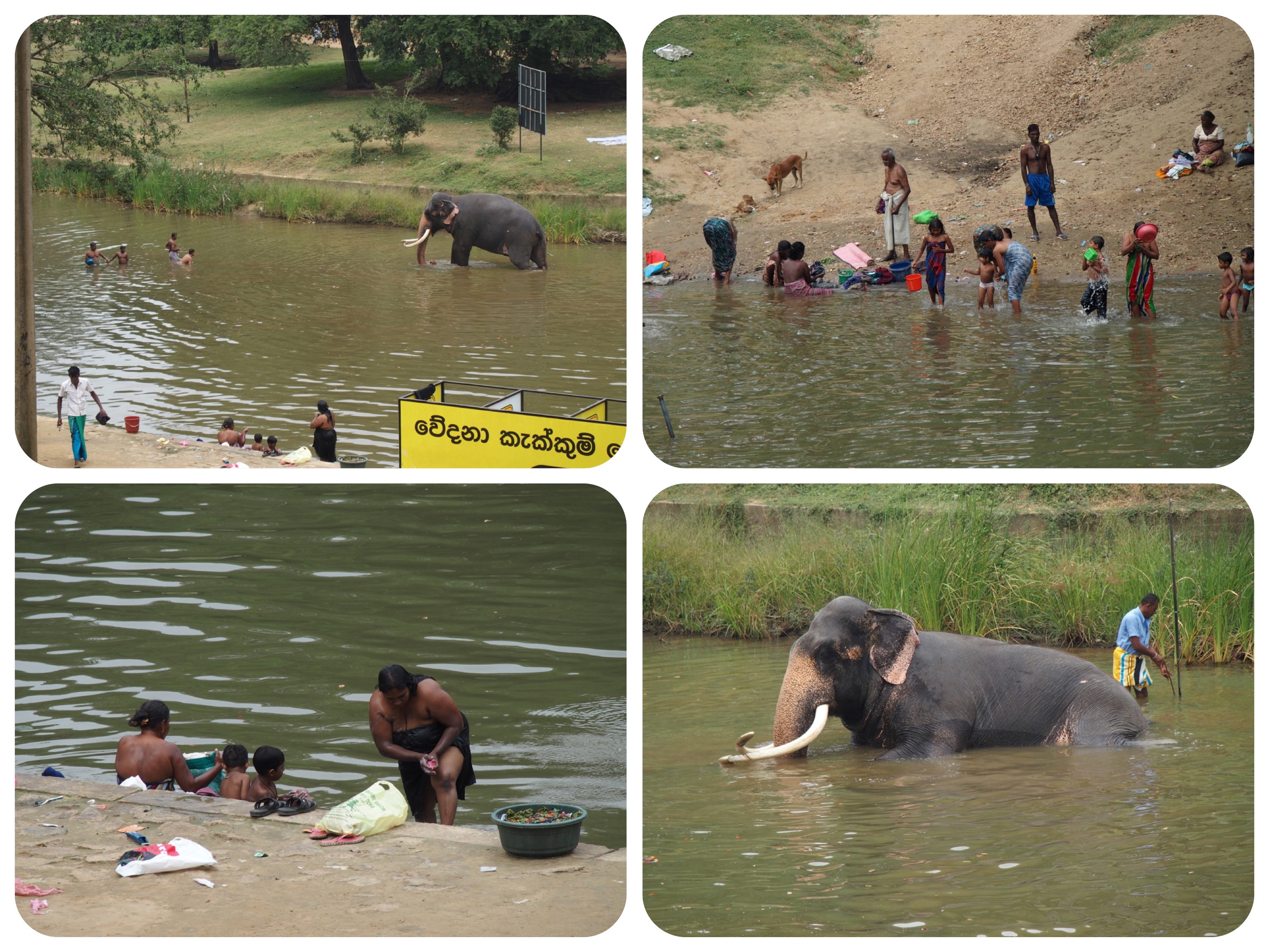 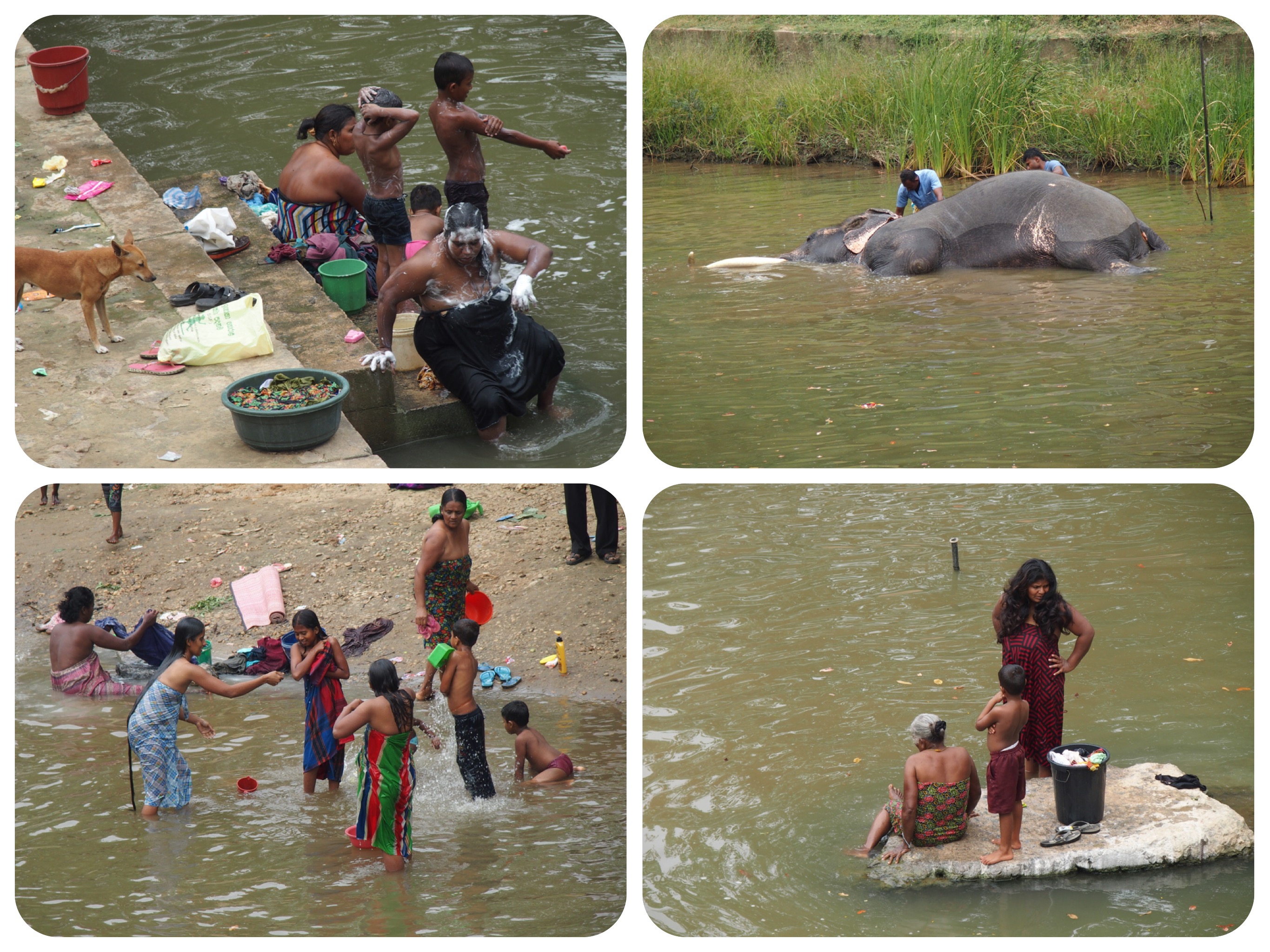 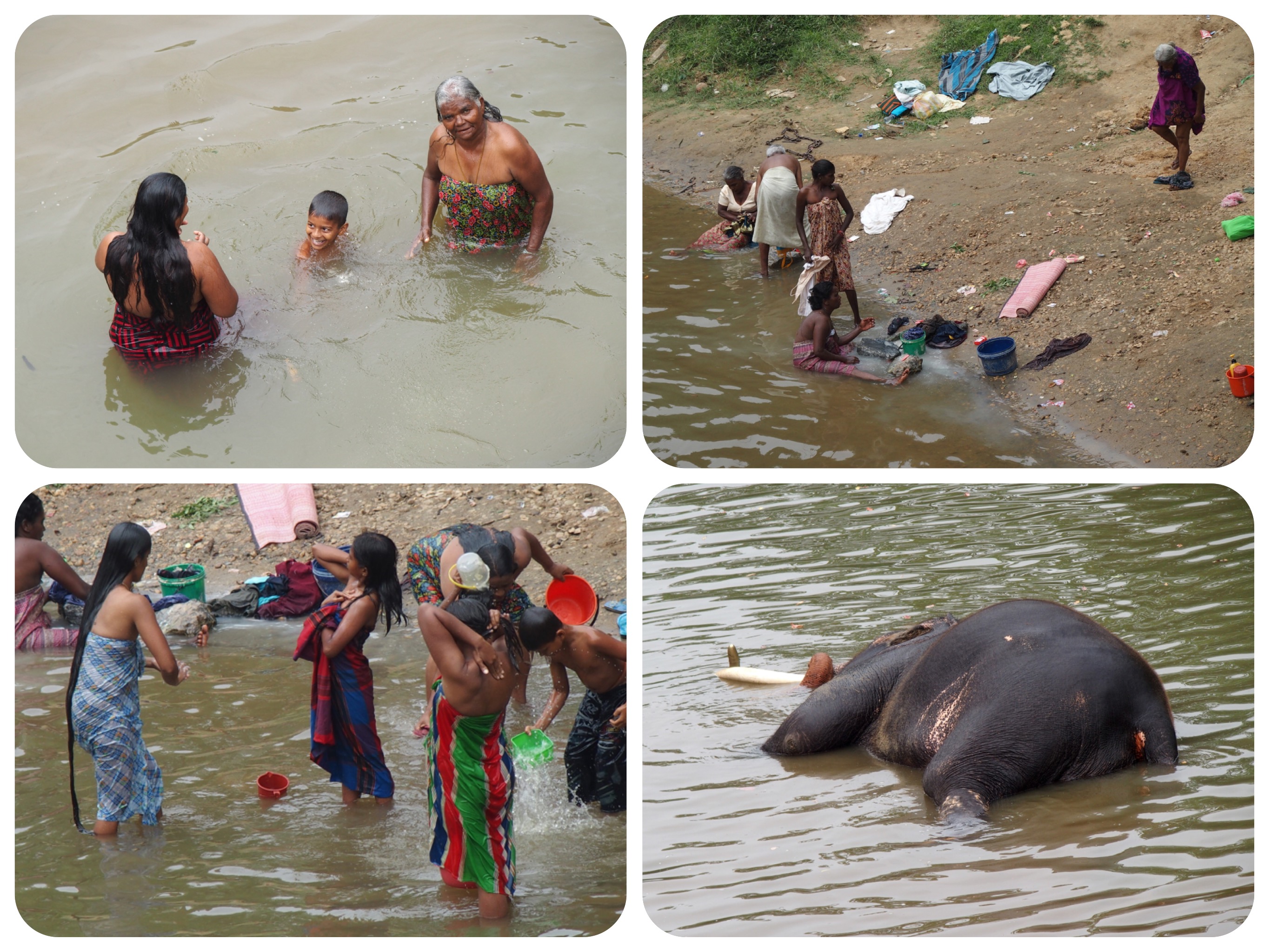 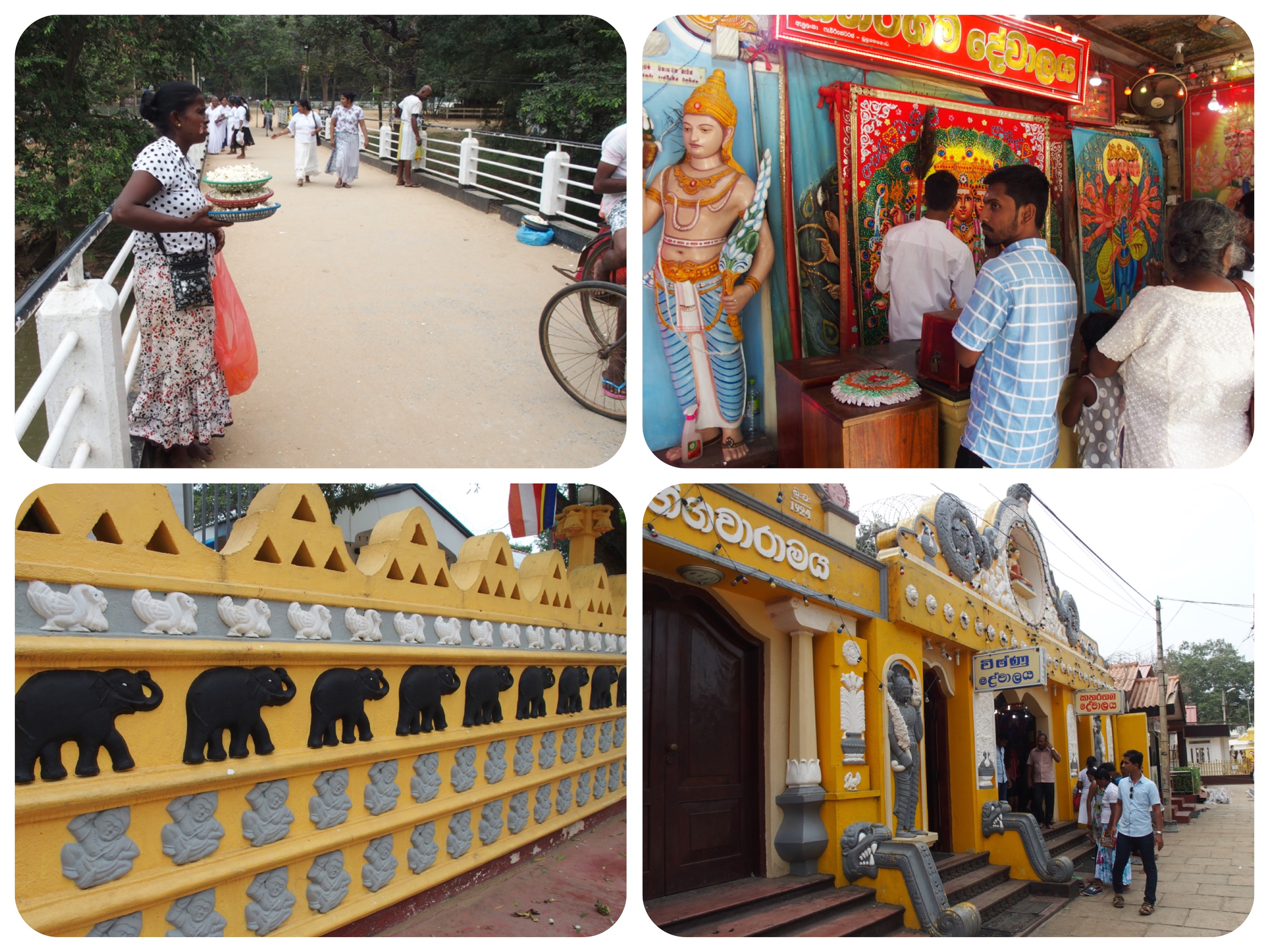 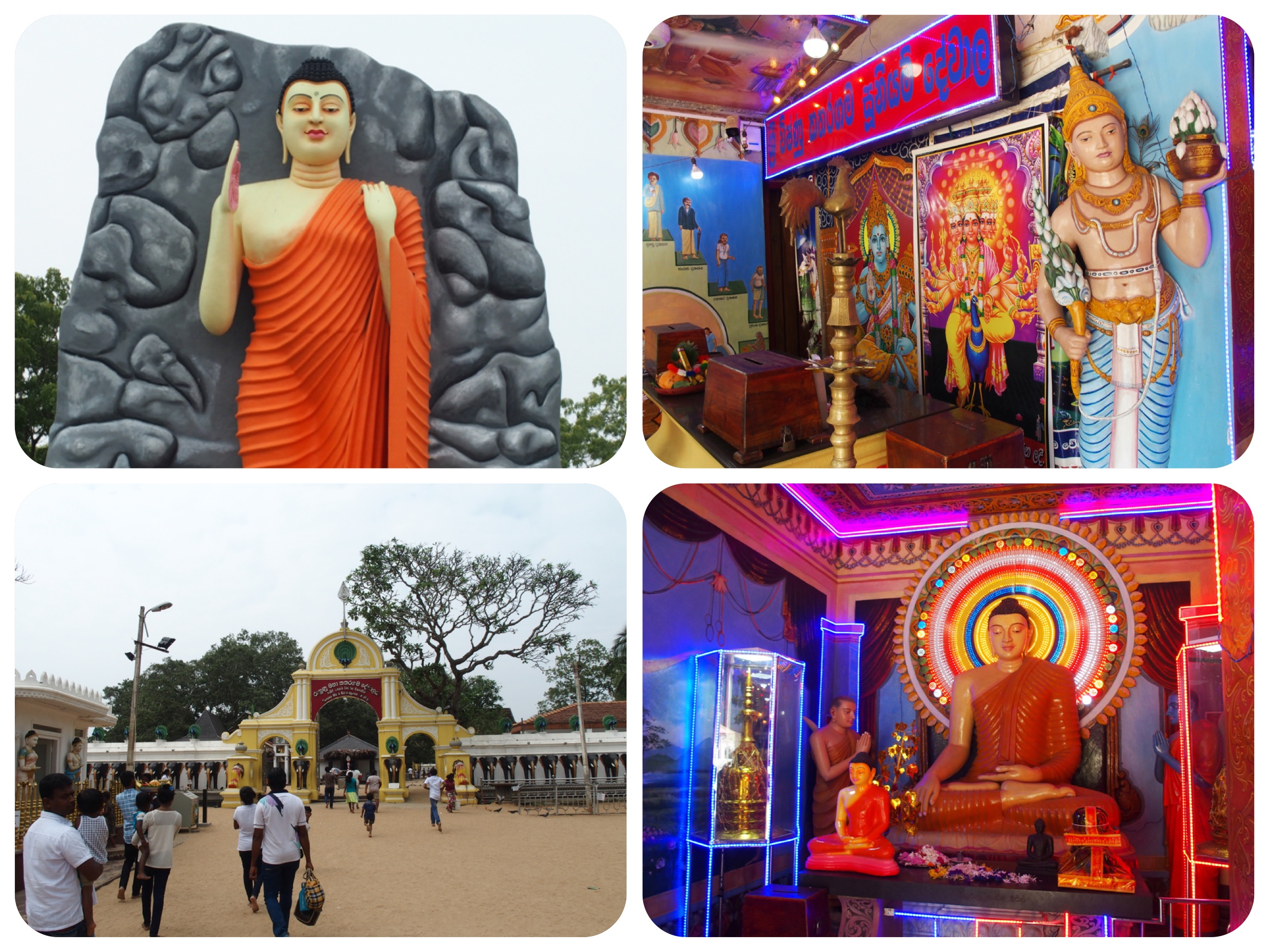 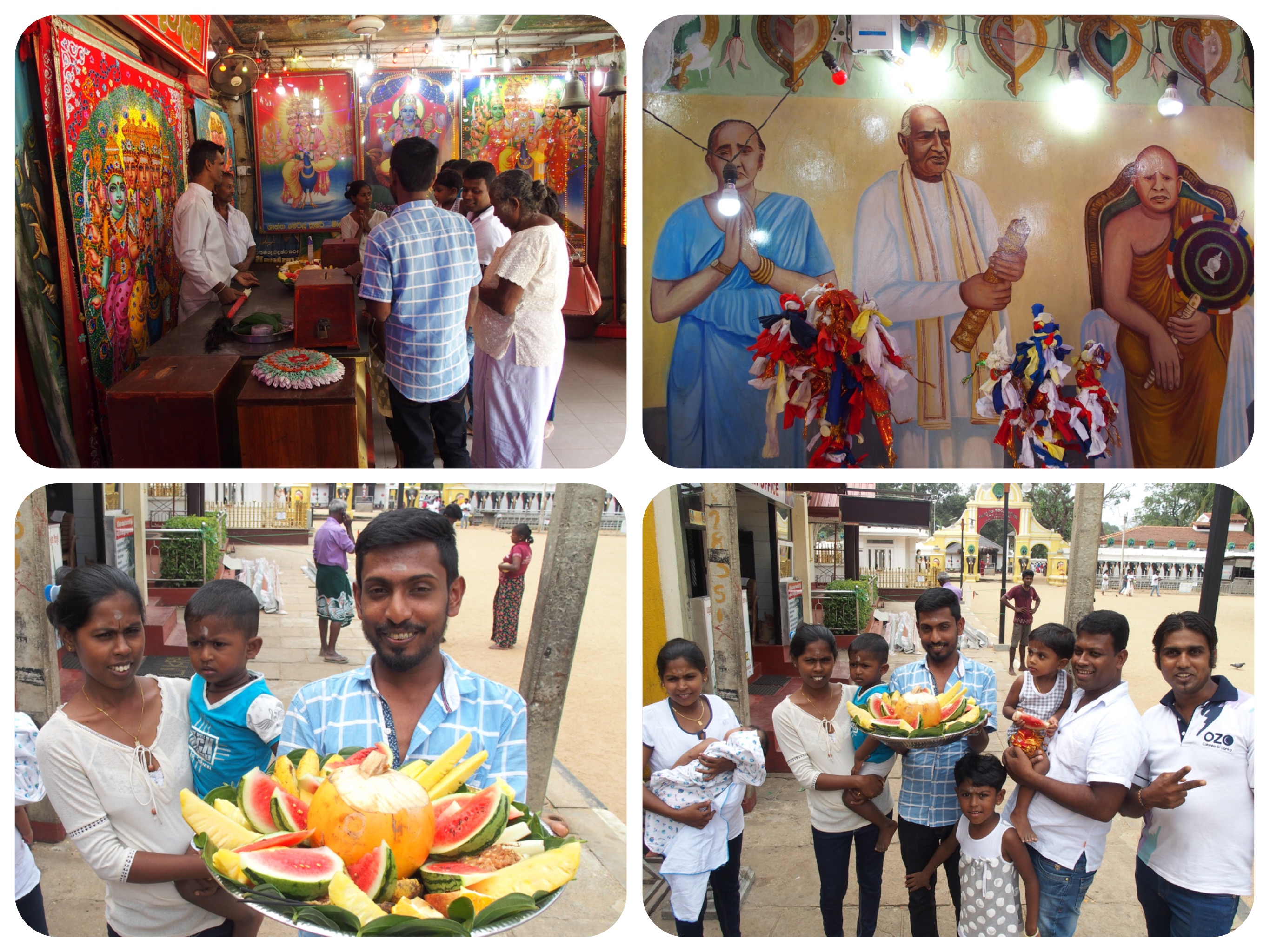 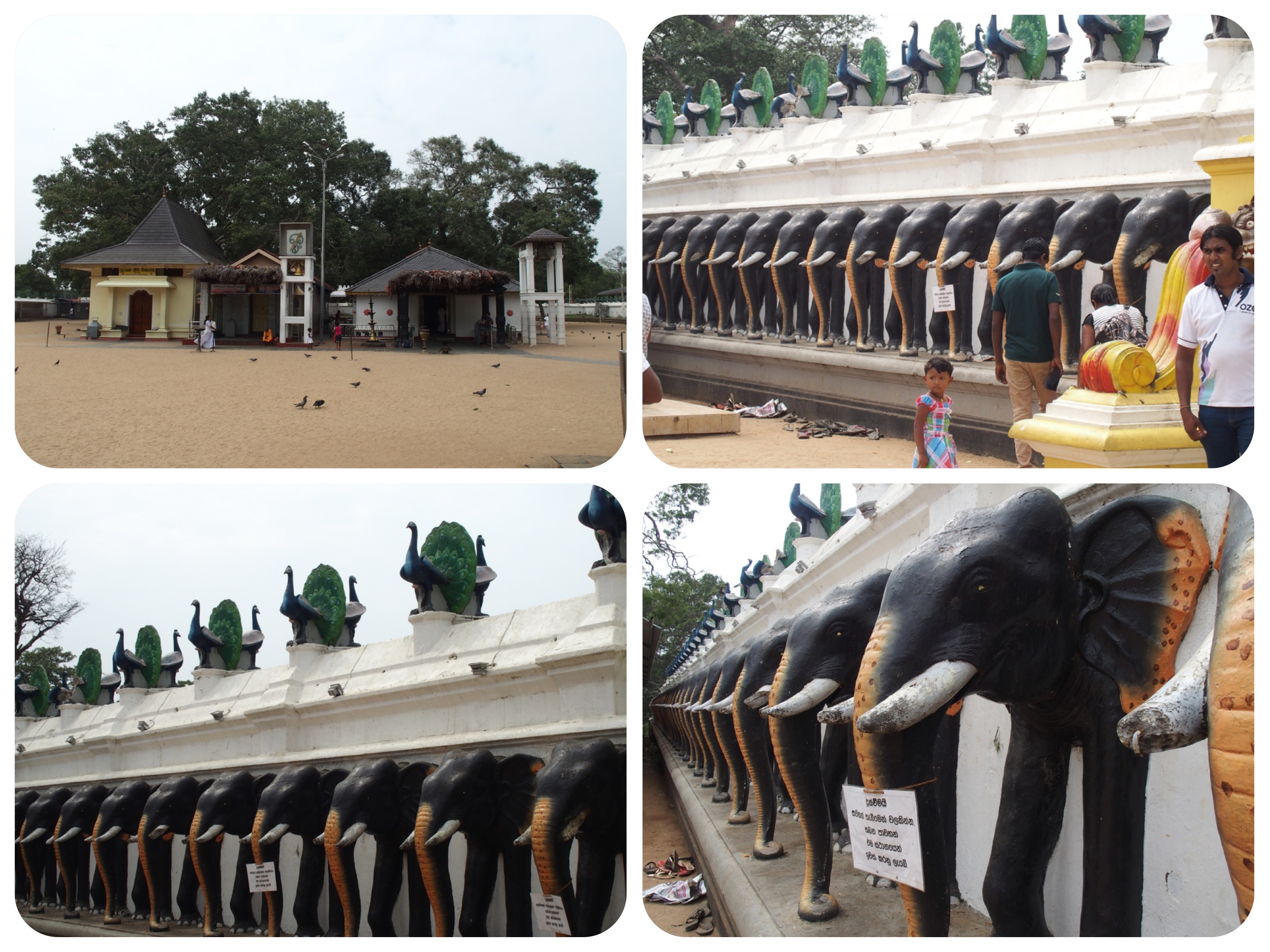 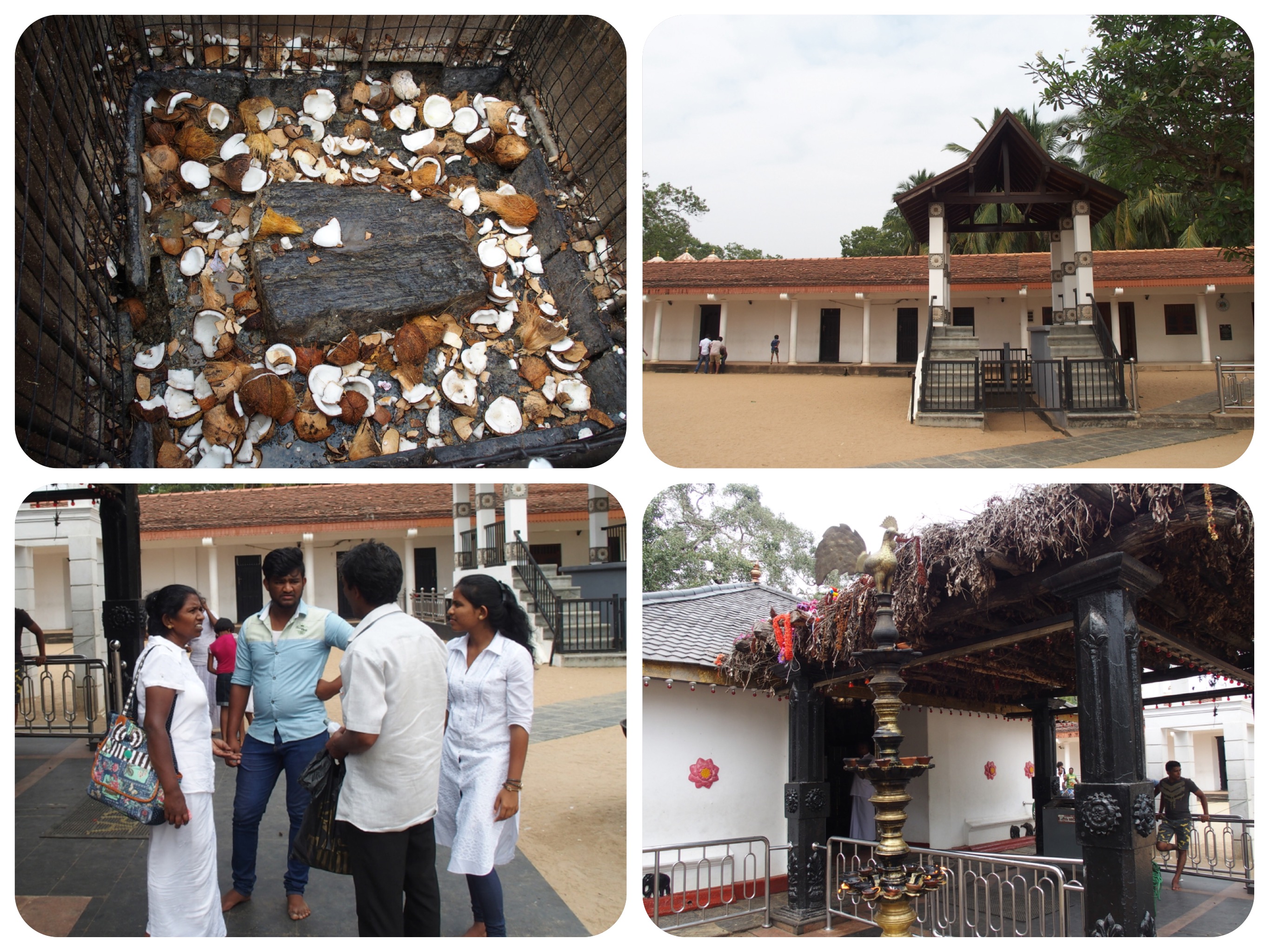 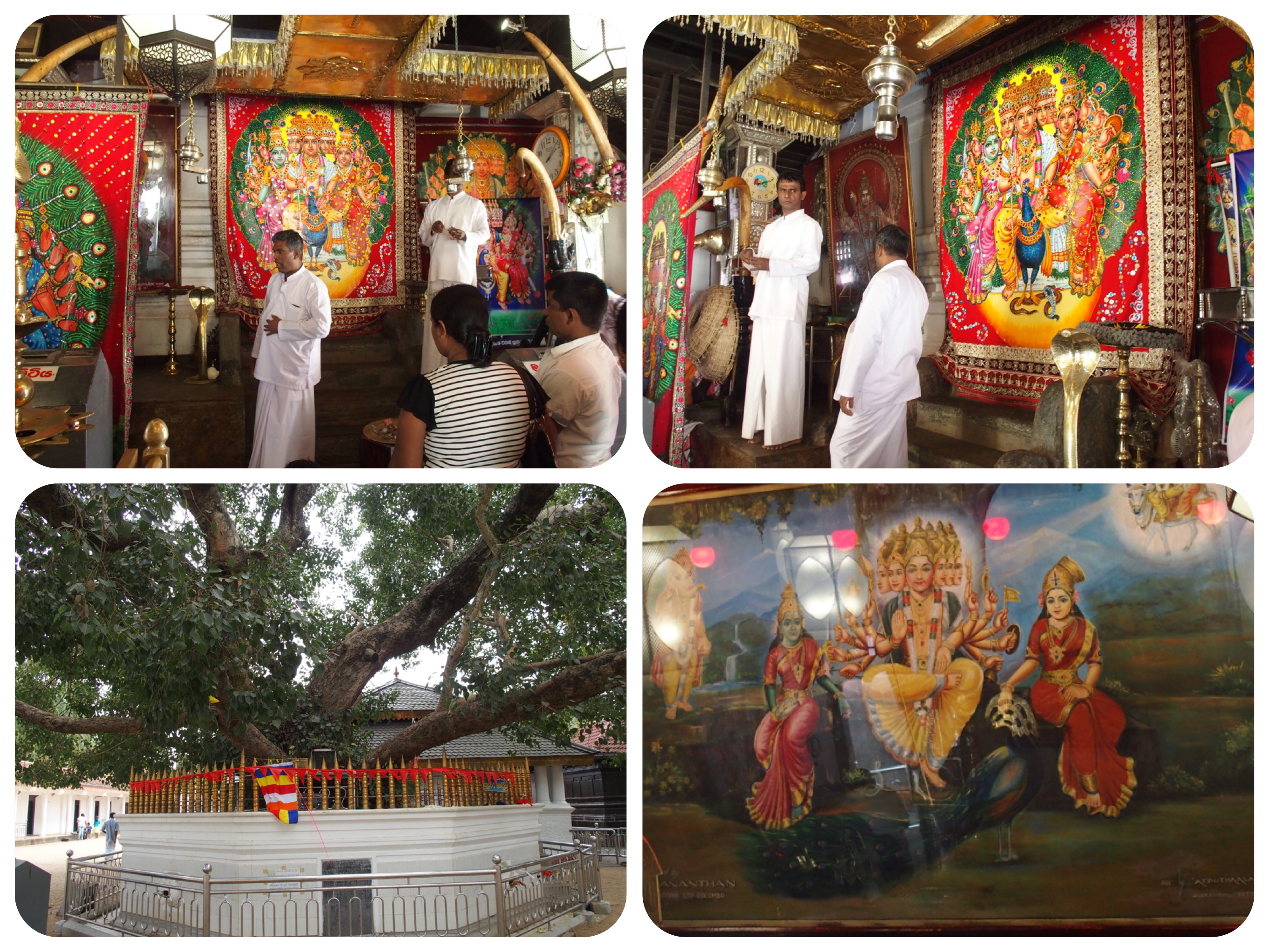 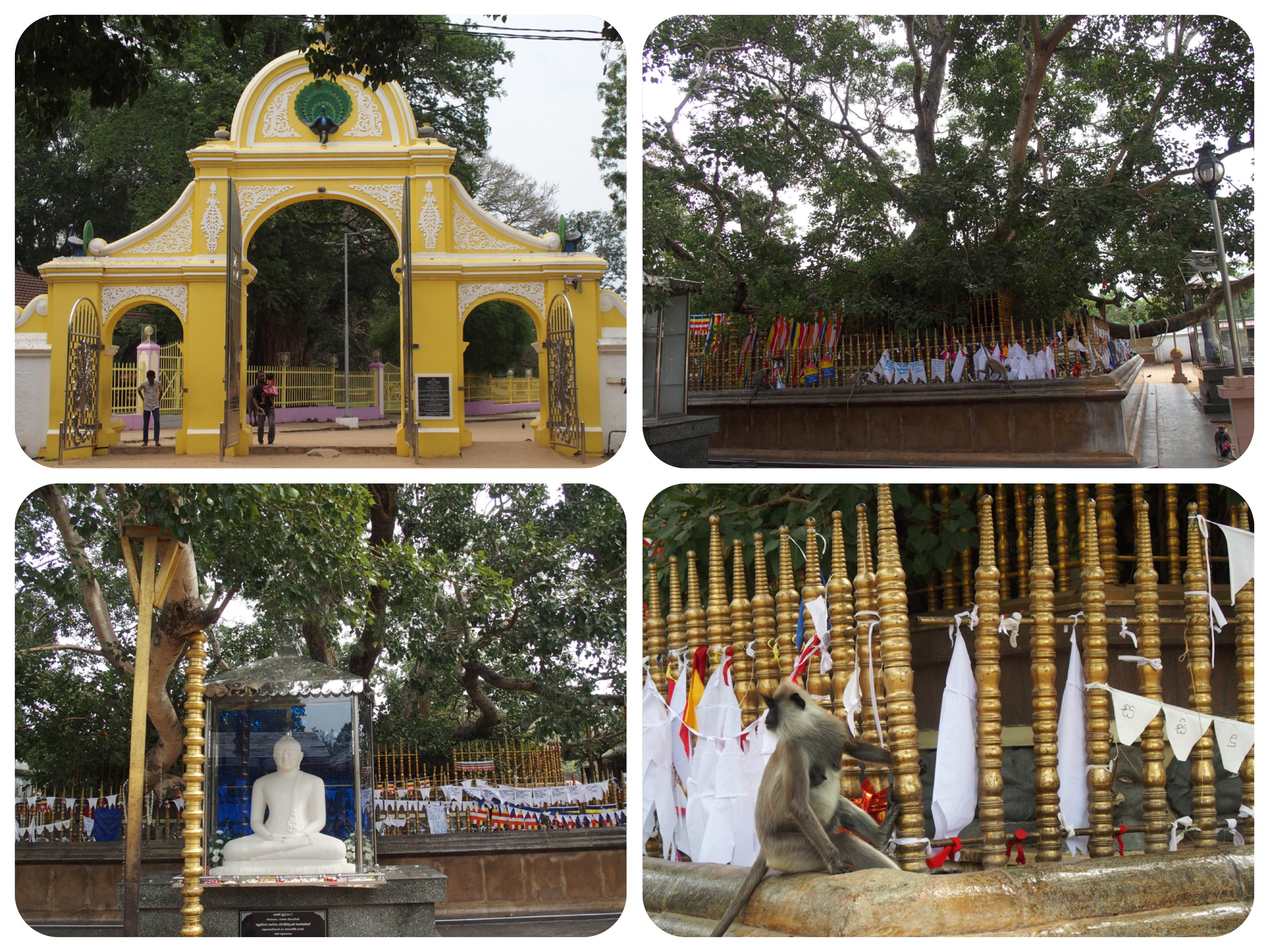 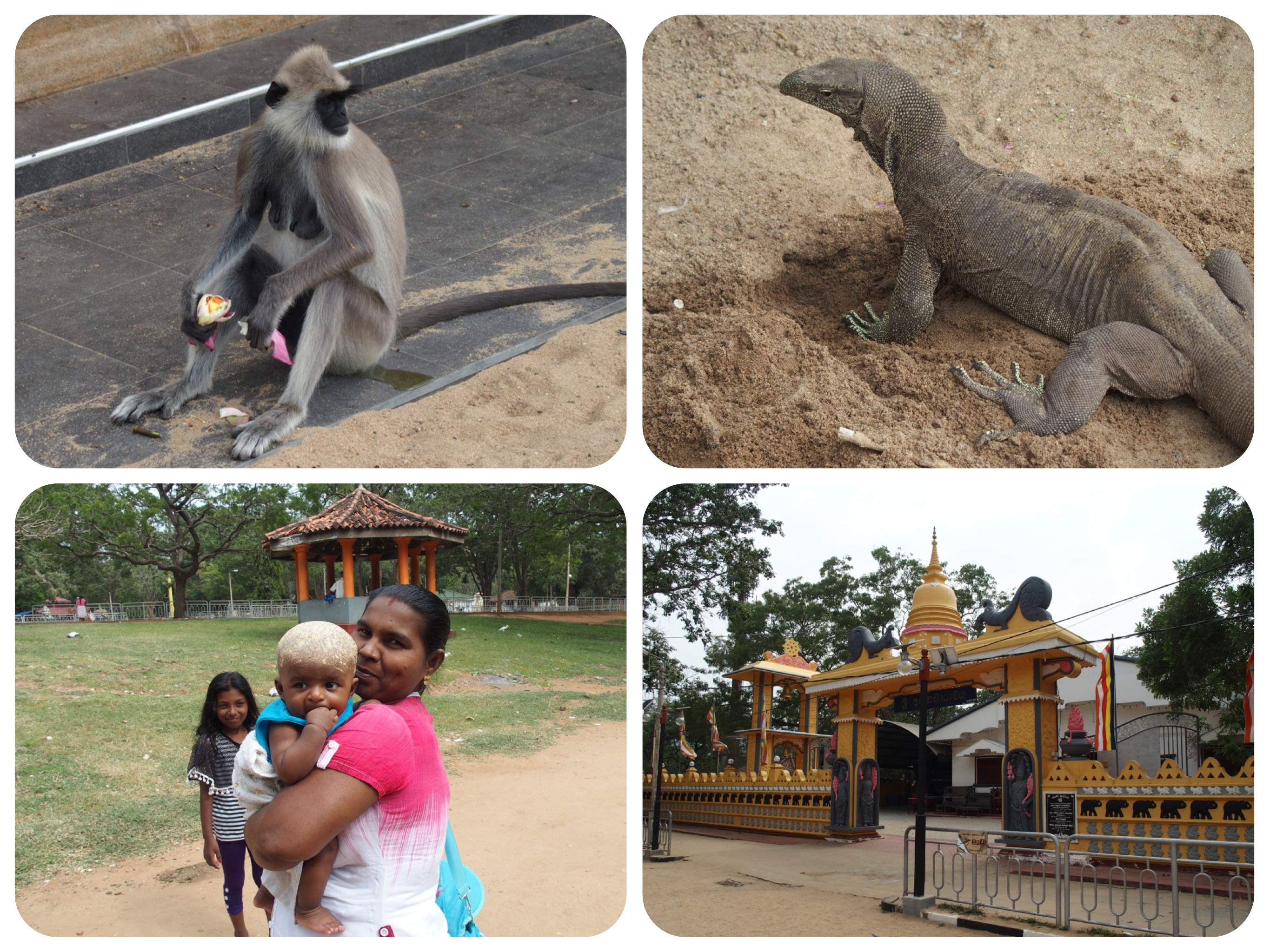 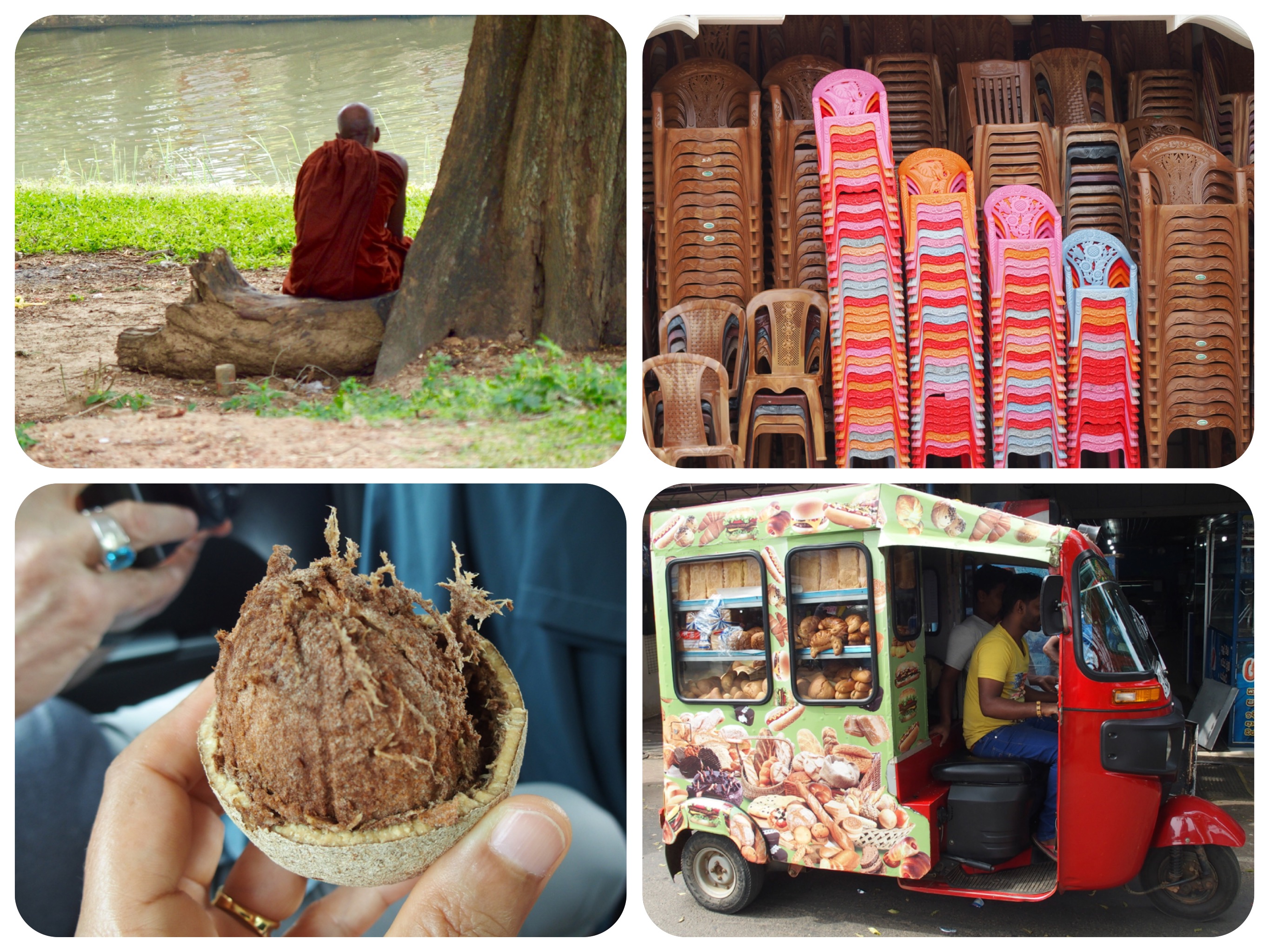 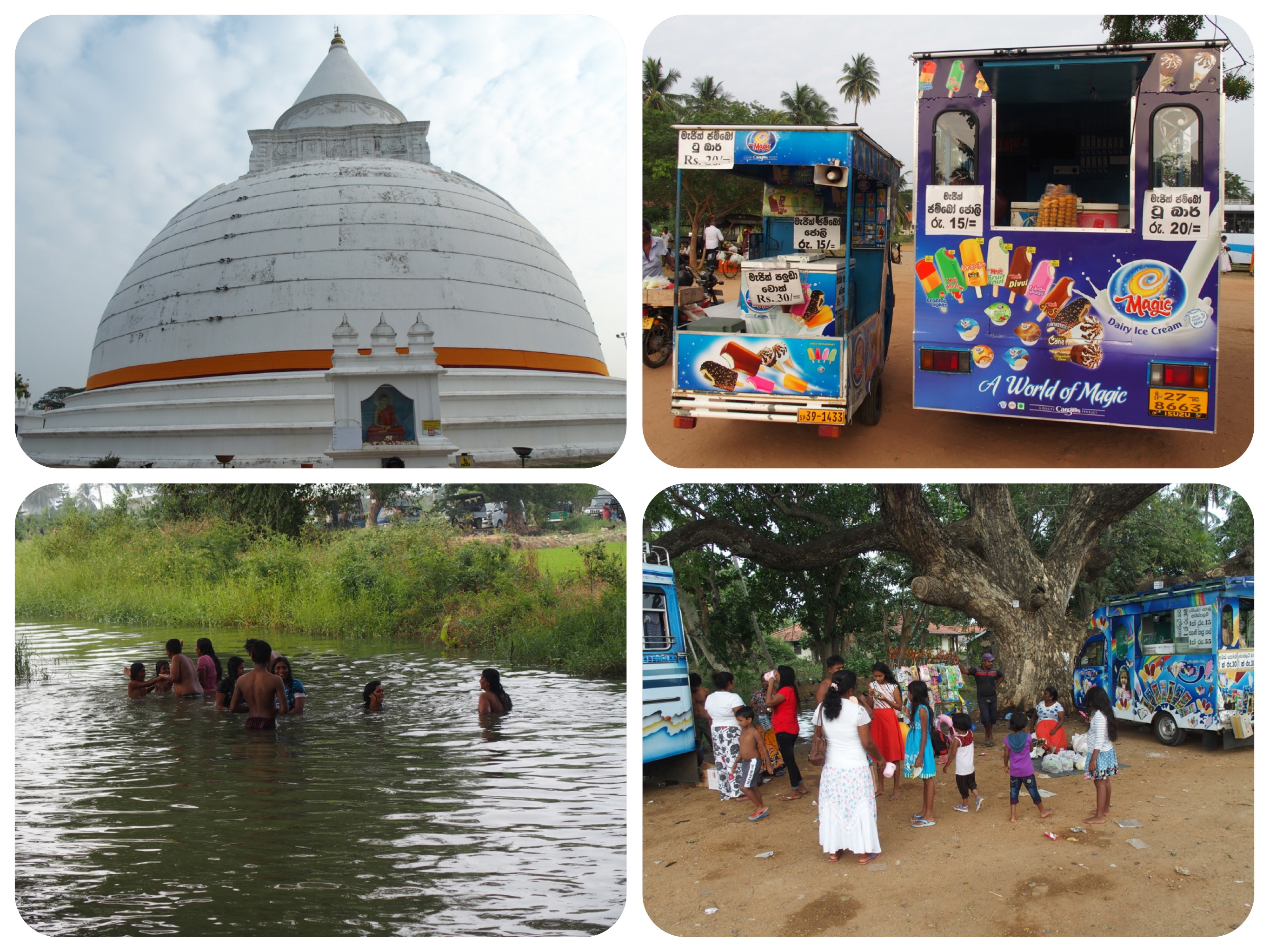 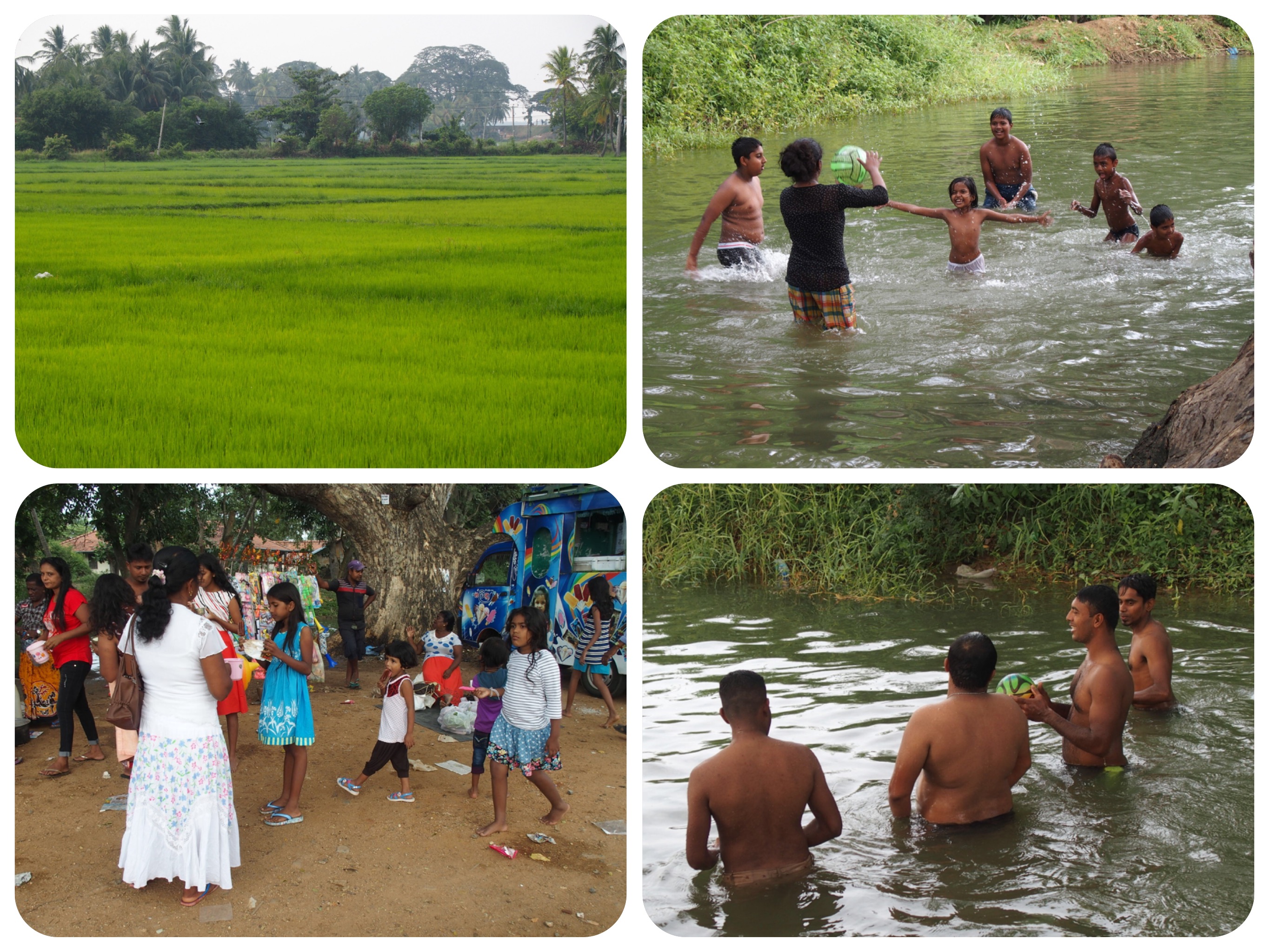 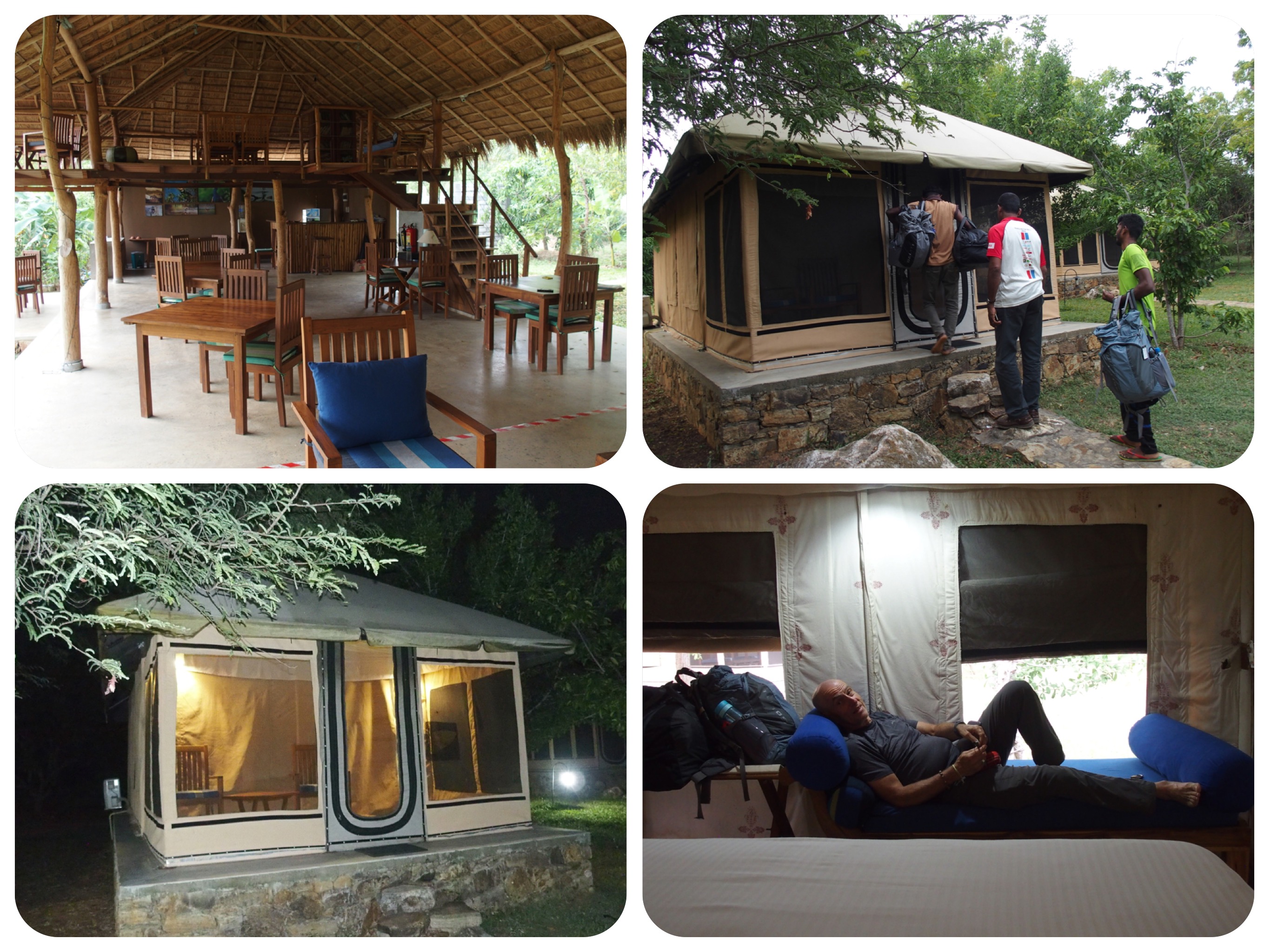 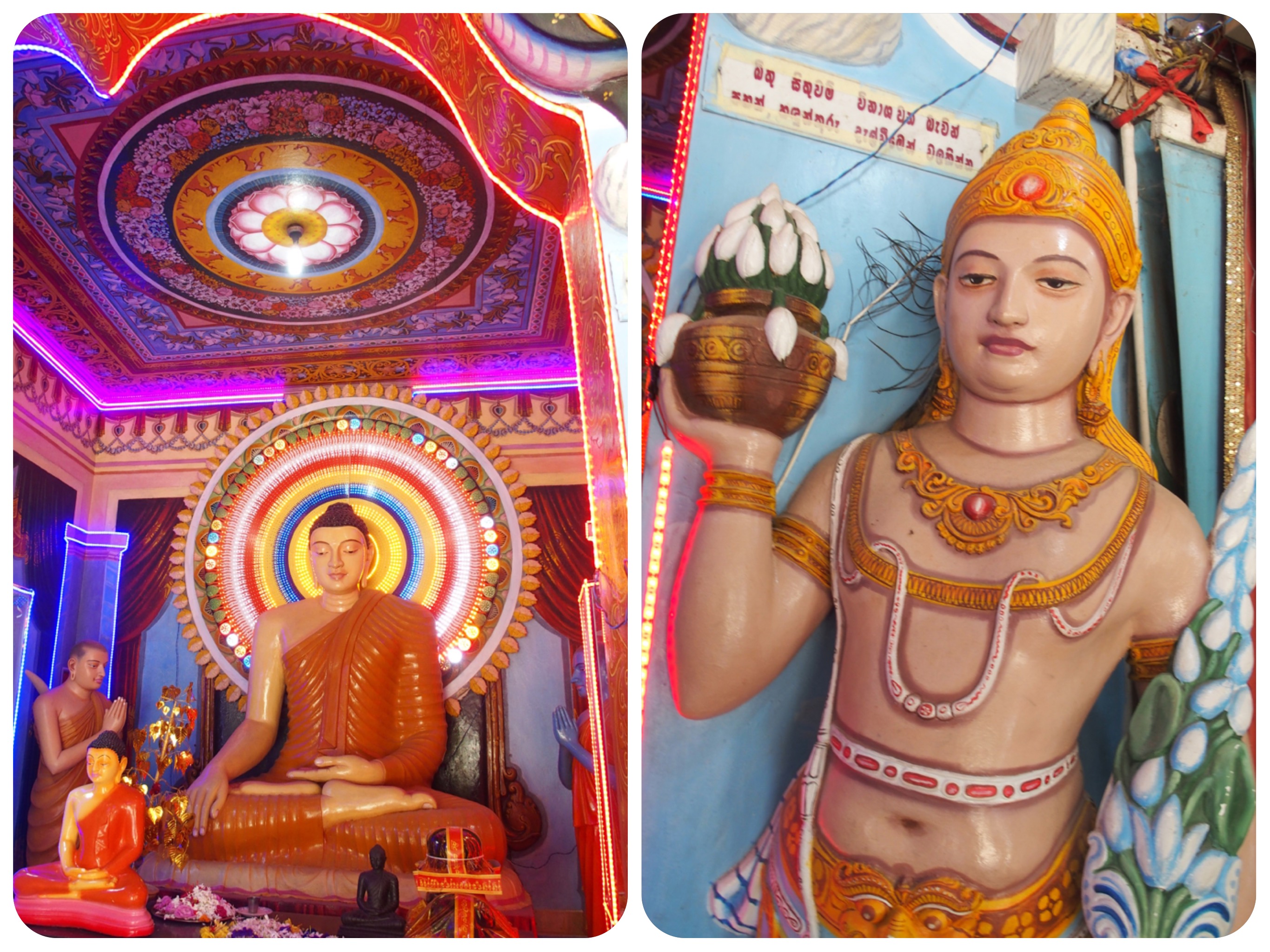 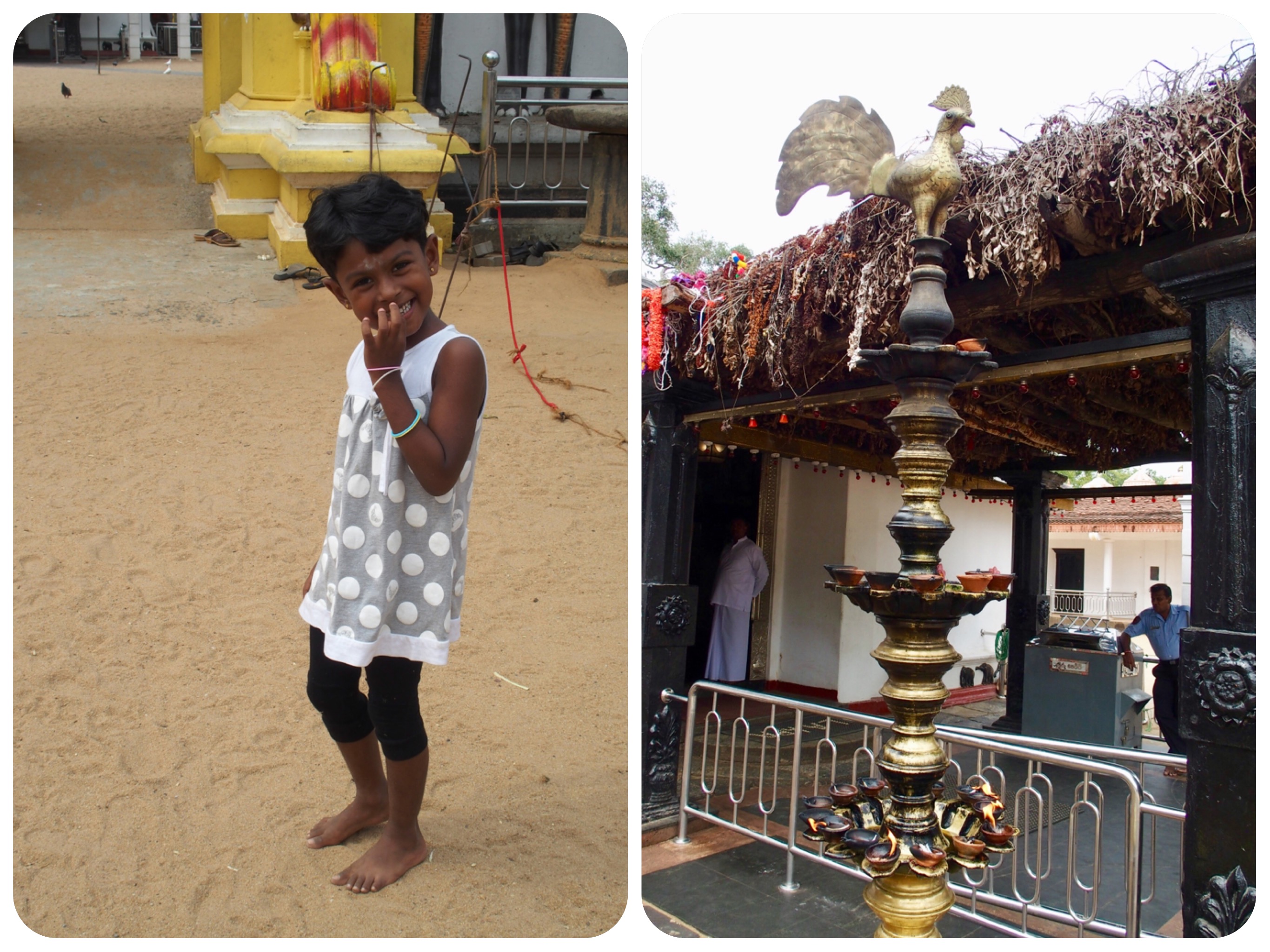 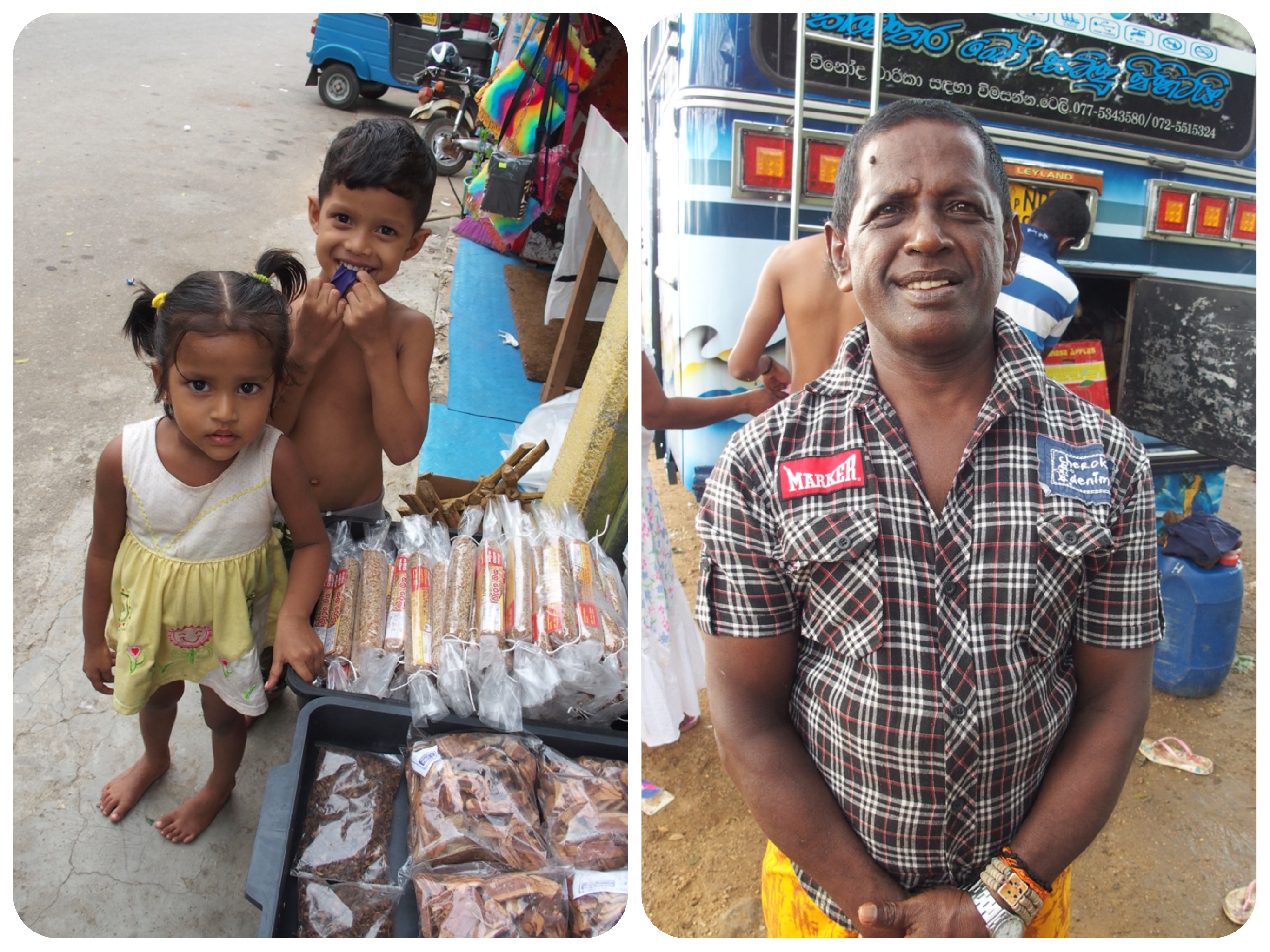 Kataragama is a sacred place of pilgrimage for the Hindu, Buddhist, Muslim and indigenous Vedda communities of Sri Lanka.

The Kataragama temple is believed to date back to about 580 BC.
The origin of the Yatra pilgrimage is shrouded in myth.
Several versions reflect the belief that it began with the God Kataragama Deviyo, when He landed somewhere on the shores of Sri Lanka and walked to Kataragama.

Over the centuries this multi-religion, 45-day pilgrimage to Kataragama has become a Sri Lankan institution.

Villages on the pilgrimage route participate by providing refreshments, meals, hospitality and accommodation to the pilgrims, whom they regard as the god’s messengers.

For centuries, pilgrims from South India and beyond felt they have been ‘called’ to walk to Kataragama.
Today, over 10,000 people participate in the pilgrimage and related celebrations in Kataragama annually.

Kataragama Temple is a large multi-religion complex.
Beside the old Buddhist temple and stupa, there are a few Hindu shrines and an Islamic Mosque, all within the large grounds located by the river.

The river is a bustling place.
We saw men washing a big elephant with huge tusks, families bathing and women doing laundry.
After its wash, the elephant lay down in the river, enjoying the cool water and occasionally splashing itself with water it scooped up with its trunk.

Grandmothers soaped up the hair of their grandchildren, and then soaped their own long hair, splashing around in the water like joyful kids.

Before entering the temple shrines, people bought fruit offerings from one of the many fruit stalls which lined both sides of the path to the temple.

A family who had a big tray of fruit stopped before me and offered me a piece of fruit.
“Please eat! Please take!,” they pleaded with me.

I picked up a pineapple piece and shared it with Jules.
They asked me to take more, but all I wanted to take was their picture, to remember their sweet faces and kindness.

Inside the temple, we were blessed by the priests and a clay dot was placed on our third eye.
Then we drank some holy water from a bronze pot with a long spout, that was poured into the palms of our hands.

In spite of the differences in caste, religion and creed, many Sri Lankans show great reverence for God Kataragama.

They believe that God Kataragama has extraordinary power to assist those who appeal to him with faith and devotion.

Kataragama Deviyo is native to Sri Lanka, and long-celebrated as a God.
In paintings and sculptures, the God Kataragama is depicted with six heads, and He often rides a peacock.

Since ancient times, there is an inseparable connection between Kataragama Deviyo and His domain.

According to some legends God Kataragama originally lived in Mount Kailash in the HImalayas and had a divine consort by the name of Thevani, before moving to Kataragama in Sri Lanka.

It is believed that God Kataragama still resides in the area.
The spiritual residence of Kataragama Deviyo is believed to be in a nearby mountain, or in the jungles of south eastern Sri Lanka, where He spends His time in meditation.

The area known as Kebiliththa, located in the Yala National Park, is one that devotees visit, after practicing strict rituals such as fasting, vegetarianism and abstinence, to get the blessings of the God.

That night, after visiting Kataragama Temple, we arranged for a stay in a Glamping tent, inside Yala National Park.
I prayed to God Kataragama to come to help me gain greater understanding on my own spiritual path.

Kataragama is one of the 16 places of pilgrimage that most Buddhists visit in Sri Lanka.

According to the chronicles of Sri Lankan history, a Bodhi sapling from the tree under which Gautama Buddha attained enlightenment in India was brought here and planted in the 3rd century BC.

As I walked around the sandy ground, I felt compelled to take home three leaves that had fallen from the Bodhi tree.

With excitement in my heart, we went to spend the night Glamping in a tent in the jungle.
It was a lovely tent, with strong air conditioning, a king size bed, a spacious shower and a toilet.

We were the only guests, and we sat listening to the sounds of the jungle while eating home cooked Sri Lankan food.

That night I had lots and lots of dreams.
Some were significant to me, but the most memorable one was a dream I had of swimming in a very stormy sea.
I remember seeing a wonderful and strong woman wearing a bikini, swimming next to me.

The next thing I recall was being lifted up by a huge wave, hundreds of feet tall.
As I surfed down the wave I had the feeling of falling down into an abyss, a dark canyon of the unknown.

I could not see anything below me, as it was all shrouded like a dark cloud.
I do remember NOT feeling any fear, just a calm trust, and somehow I felt reassured, as I fell down the wave into the unknown….

When I woke up in the morning from all the dreams I had had, I only remembered the one with the huge wave.

As I read a little about the area we were going to next, I learned that in 2004 a huge tsunami had hit the area.

The 2004 Indian Ocean earthquake occurred on December 26th, with the epicentre off the west coast of Sumatra, Indonesia.
On January 3, 2005 a Tsunami wave created by the major earthquake hit the shores of Sri Lanka.

The Tsunami wave resulted in much damage to the island, and about 5,000 people had passed on.

Suddenly I felt that my dream the night before, was about being in the sea when the Tsunami hit.
Perhaps my consciousness had blended with those who had experienced passing on, from the wave….but who can tell…

To be honest, I was a little bit disappointed that my consciousness did not blend with that of Kataragama Deviyo that night, but instead it had merged with those who passed on.
I understood why it happened.
My vibrations were lowered by a conversation I had with a very distressed woman, who refuses to let go of her lifelong pains and many grievances.

In my morning meditation, I turned my heart and eyes ONLY to the Eternal, for I trust that those who passed on in the Tsunami, had reincarnated into greater cycles of the Eternal Life, progressing along their ultimate path towards greater understanding, Enlightenment and God Realization.