Ancient Rock Carvings in South Central Sri Lanka, and a Jataka Tale Of A Tortoise Who Loved Its Home Too Much 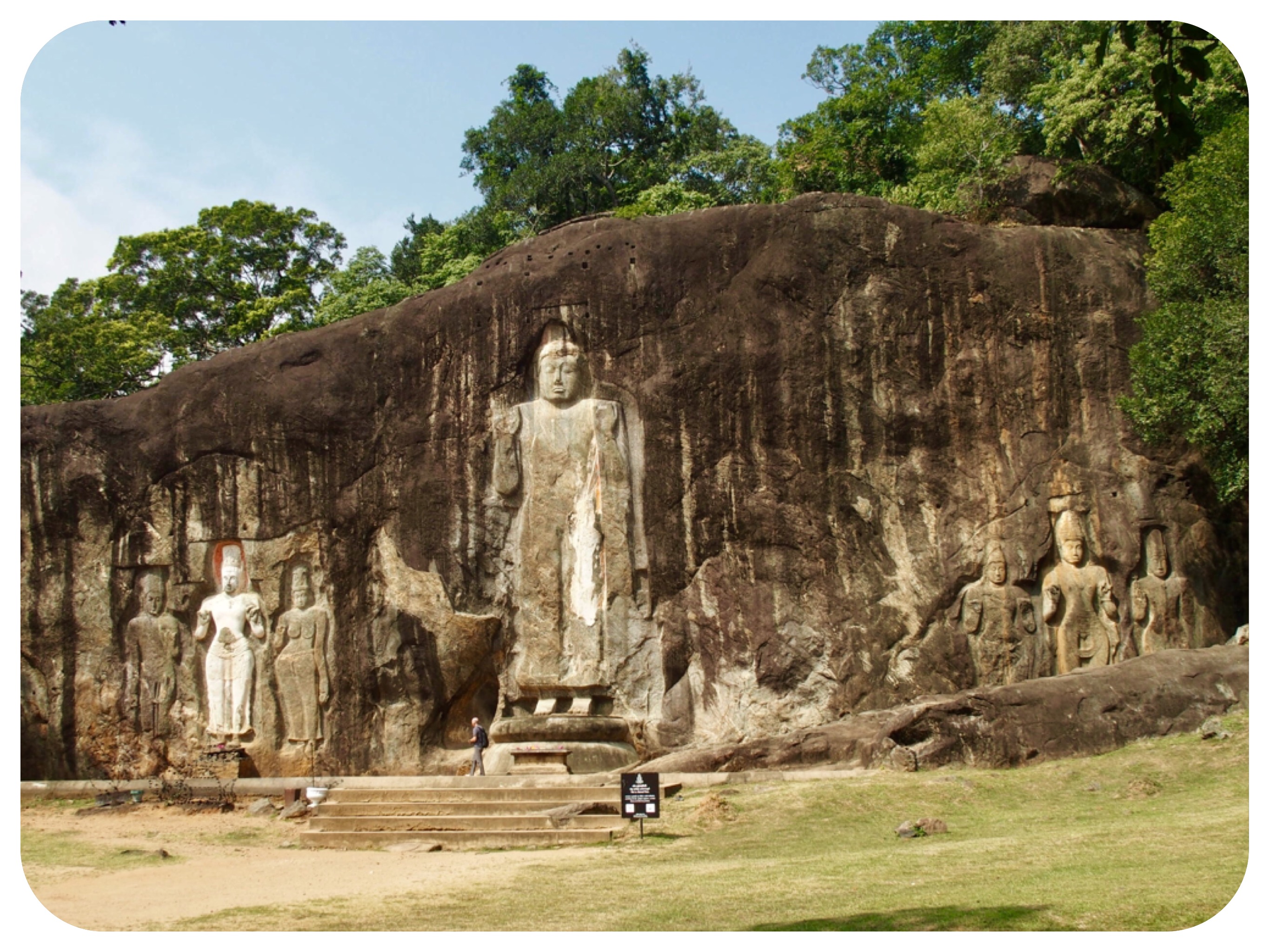 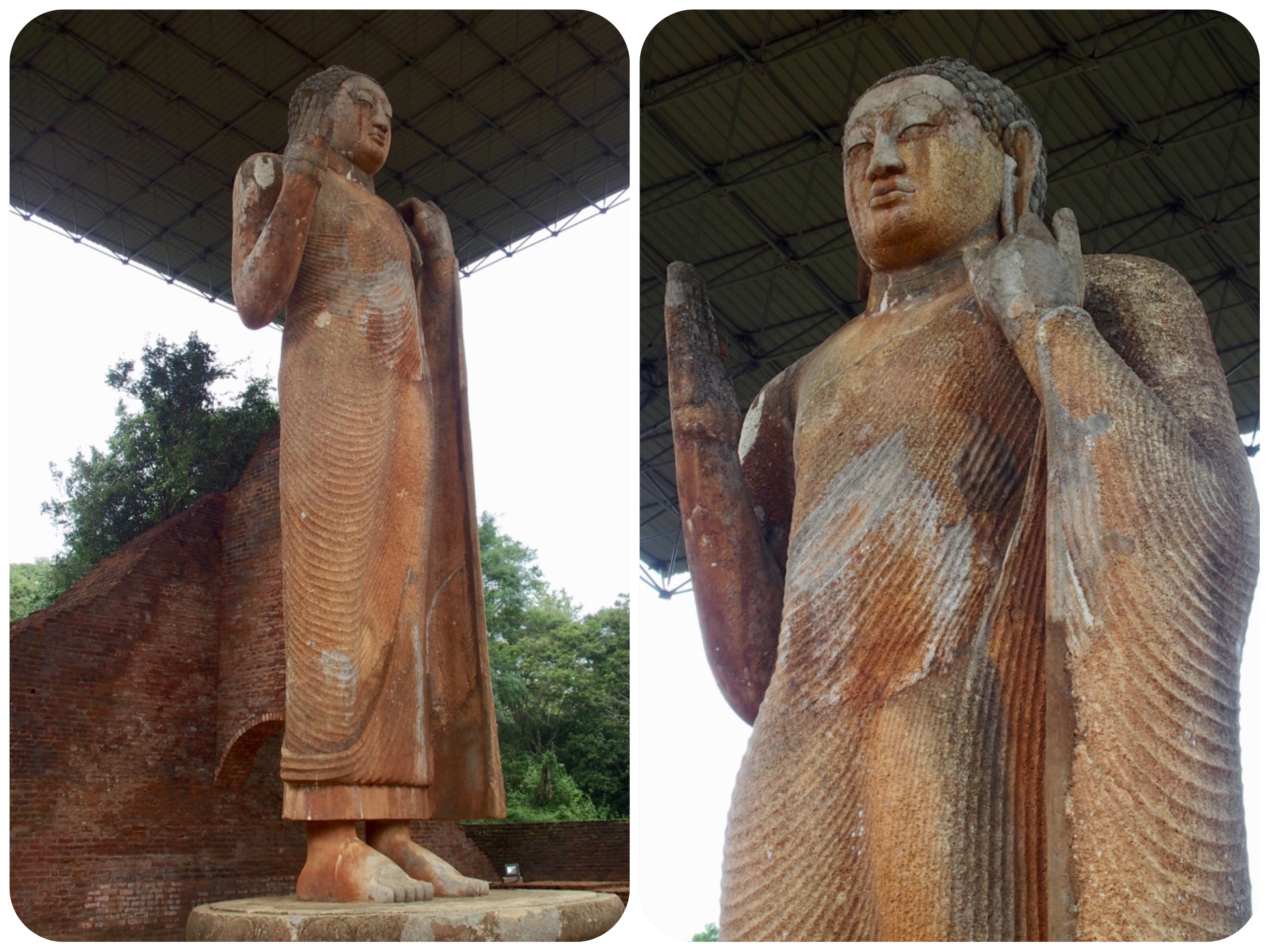 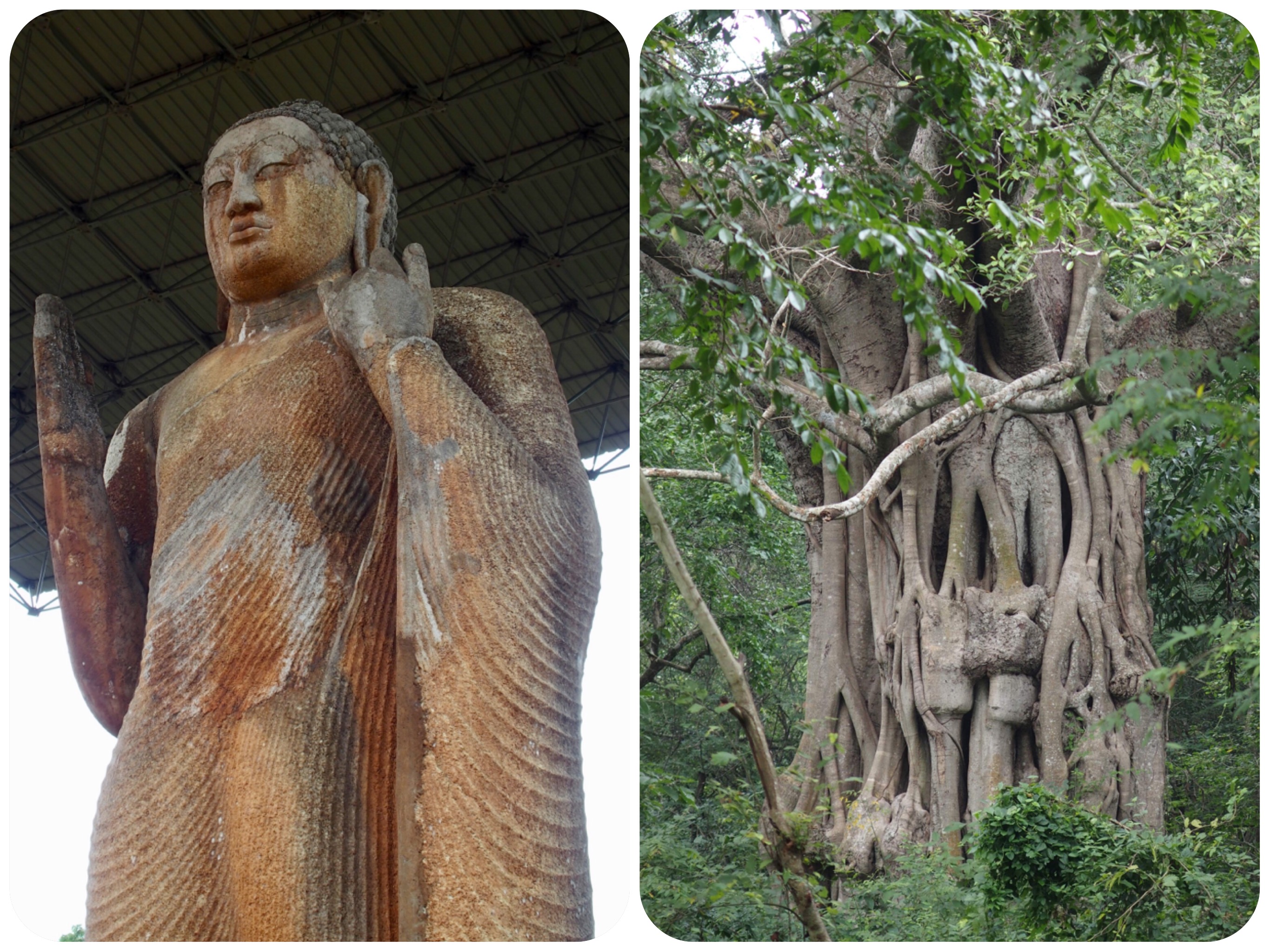 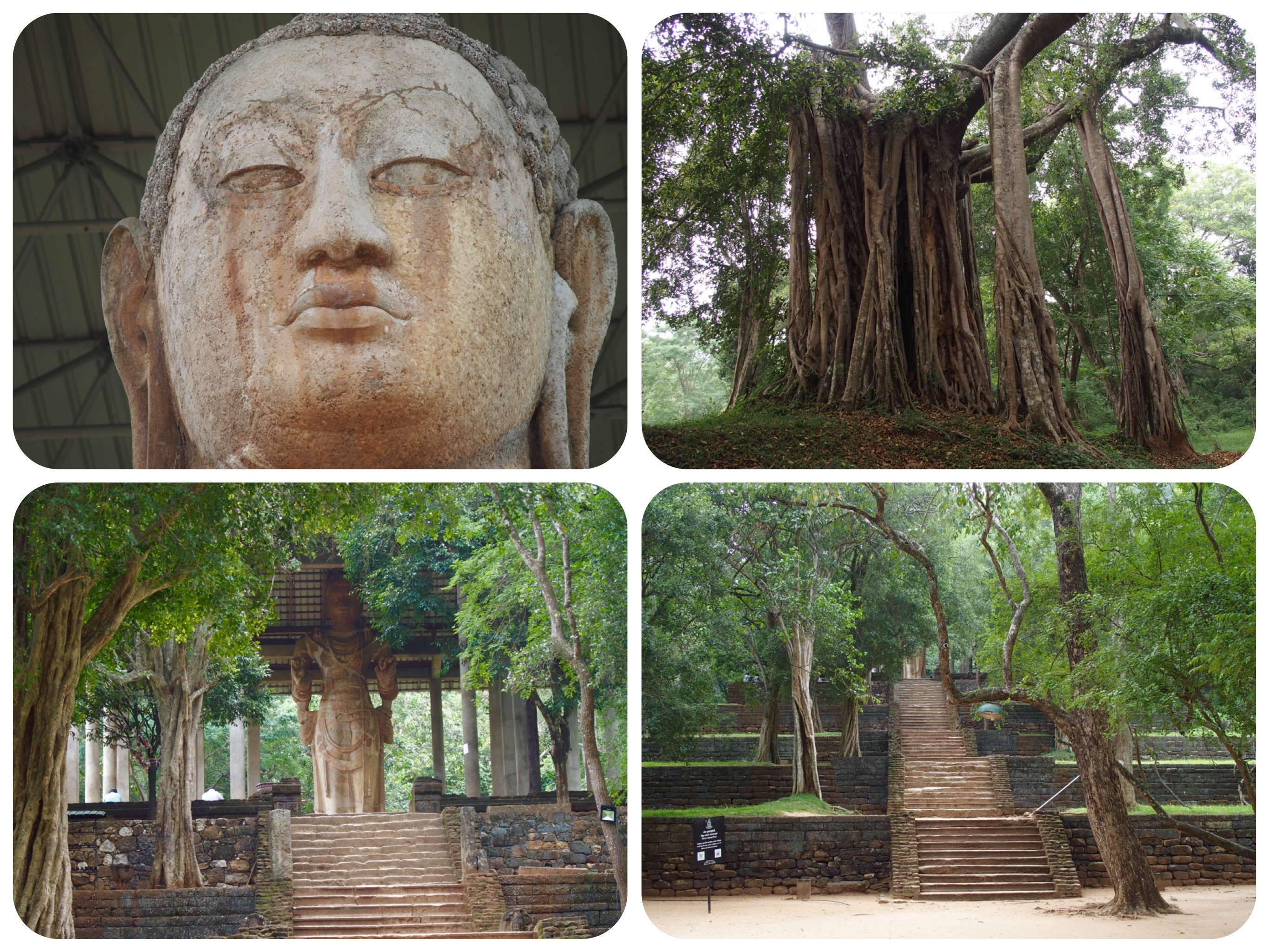 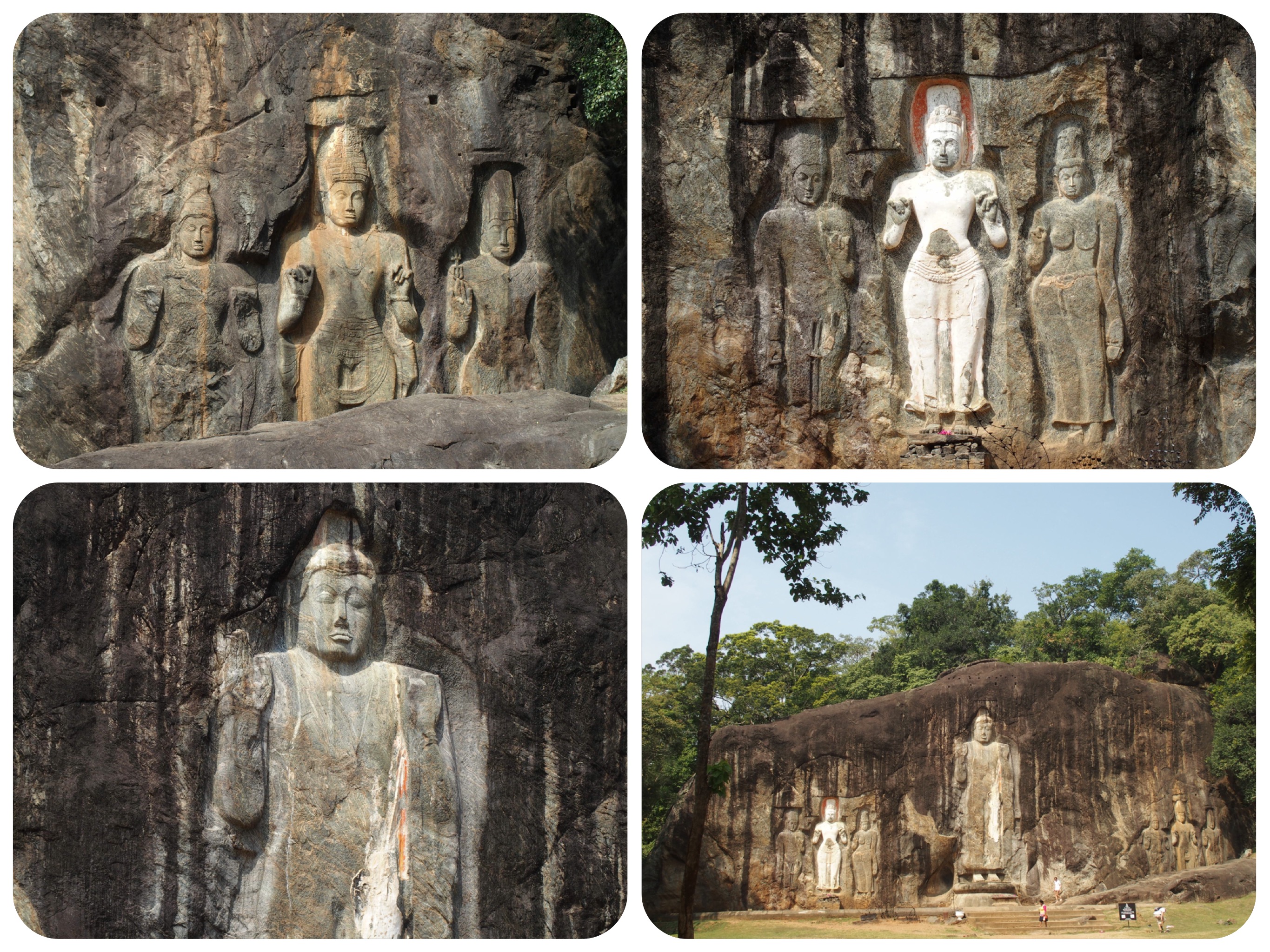 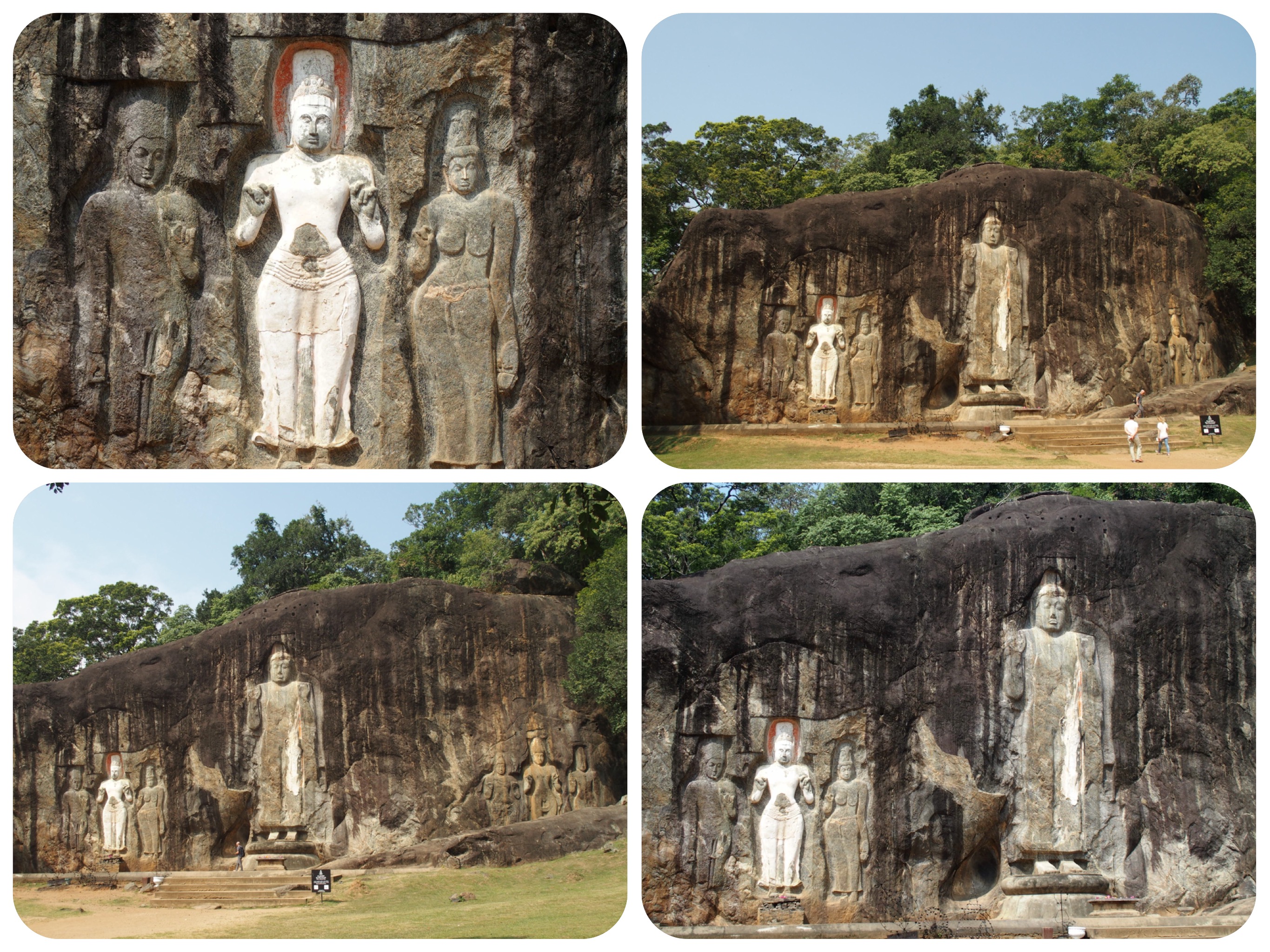 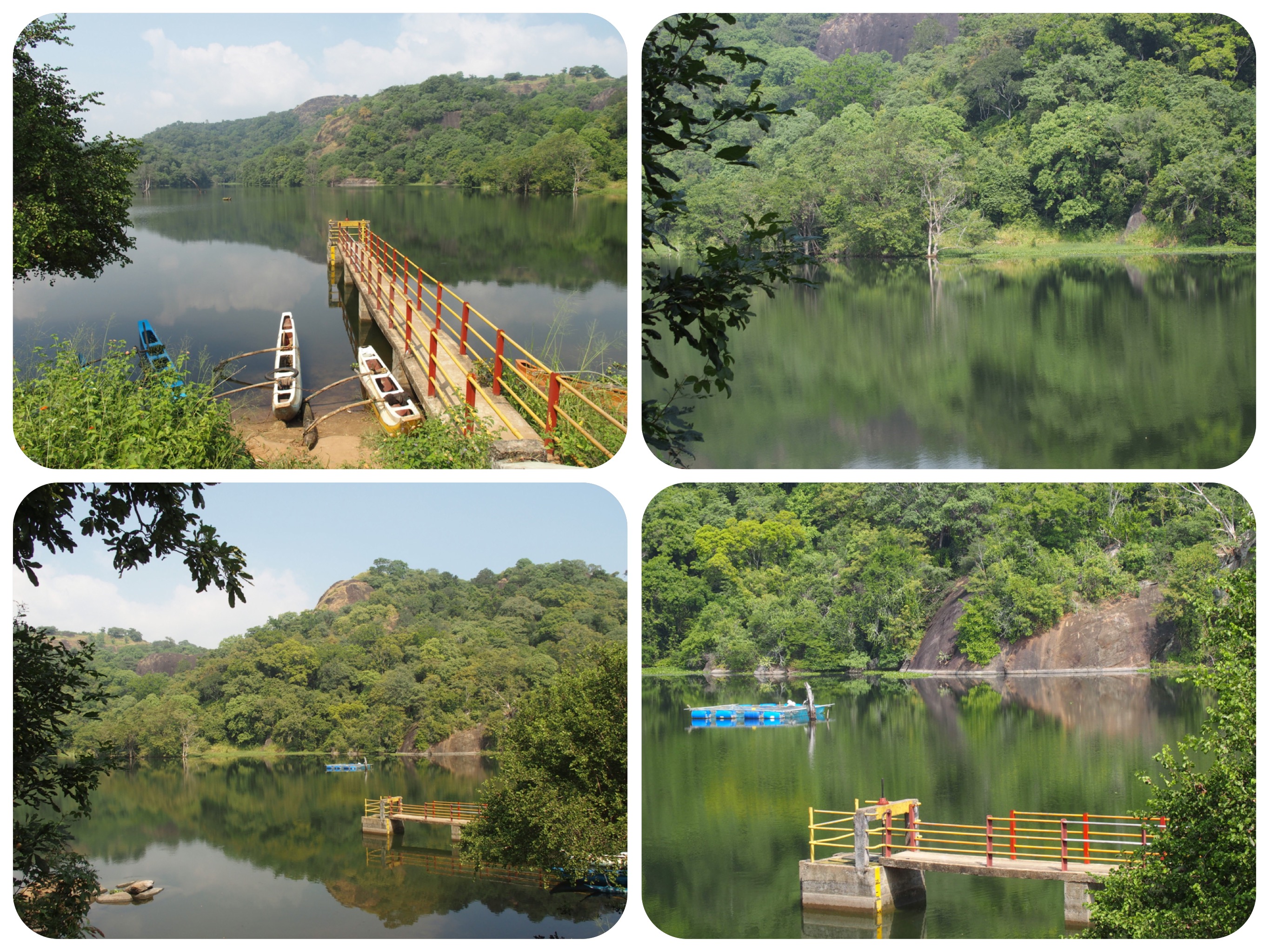 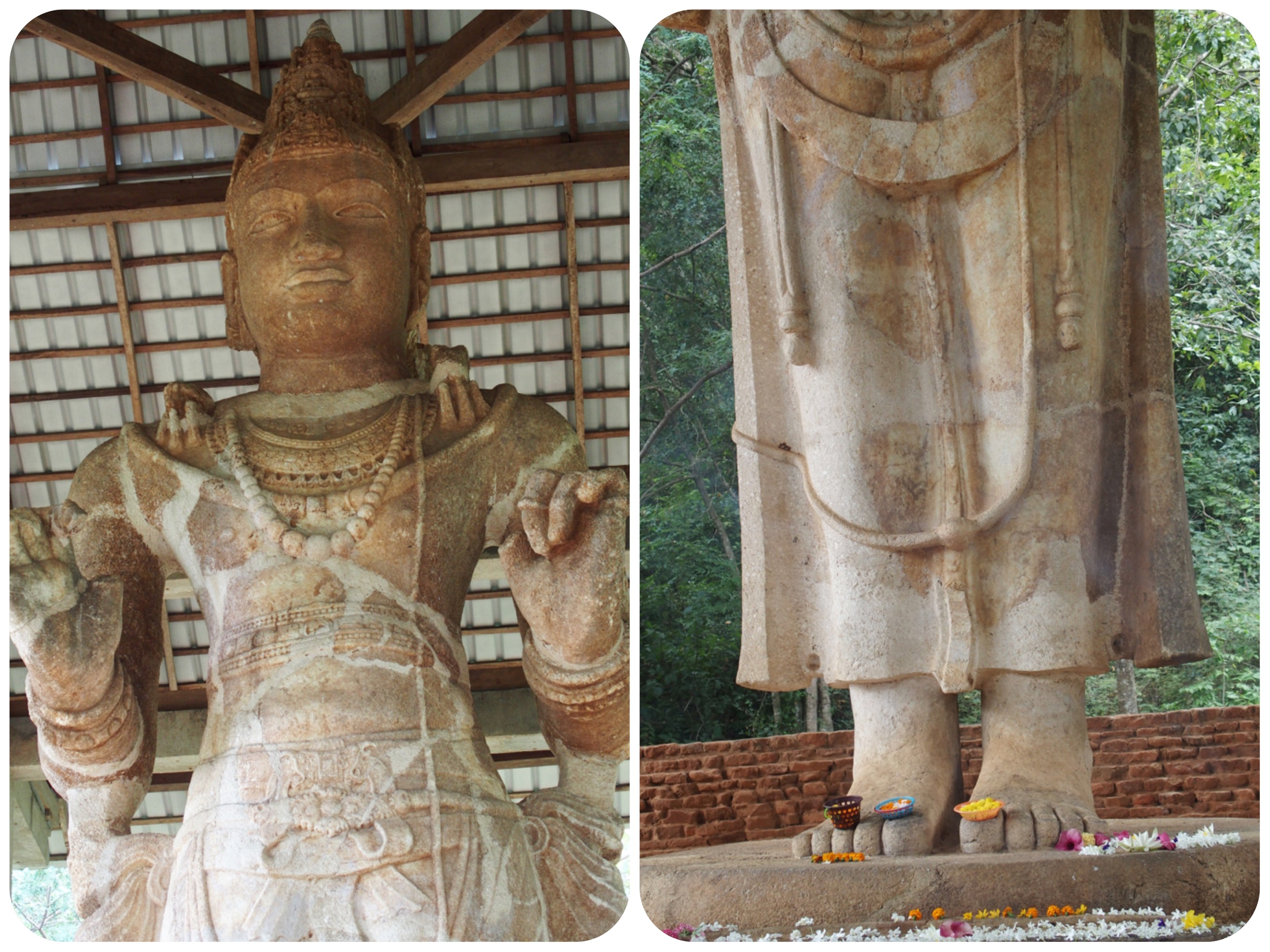 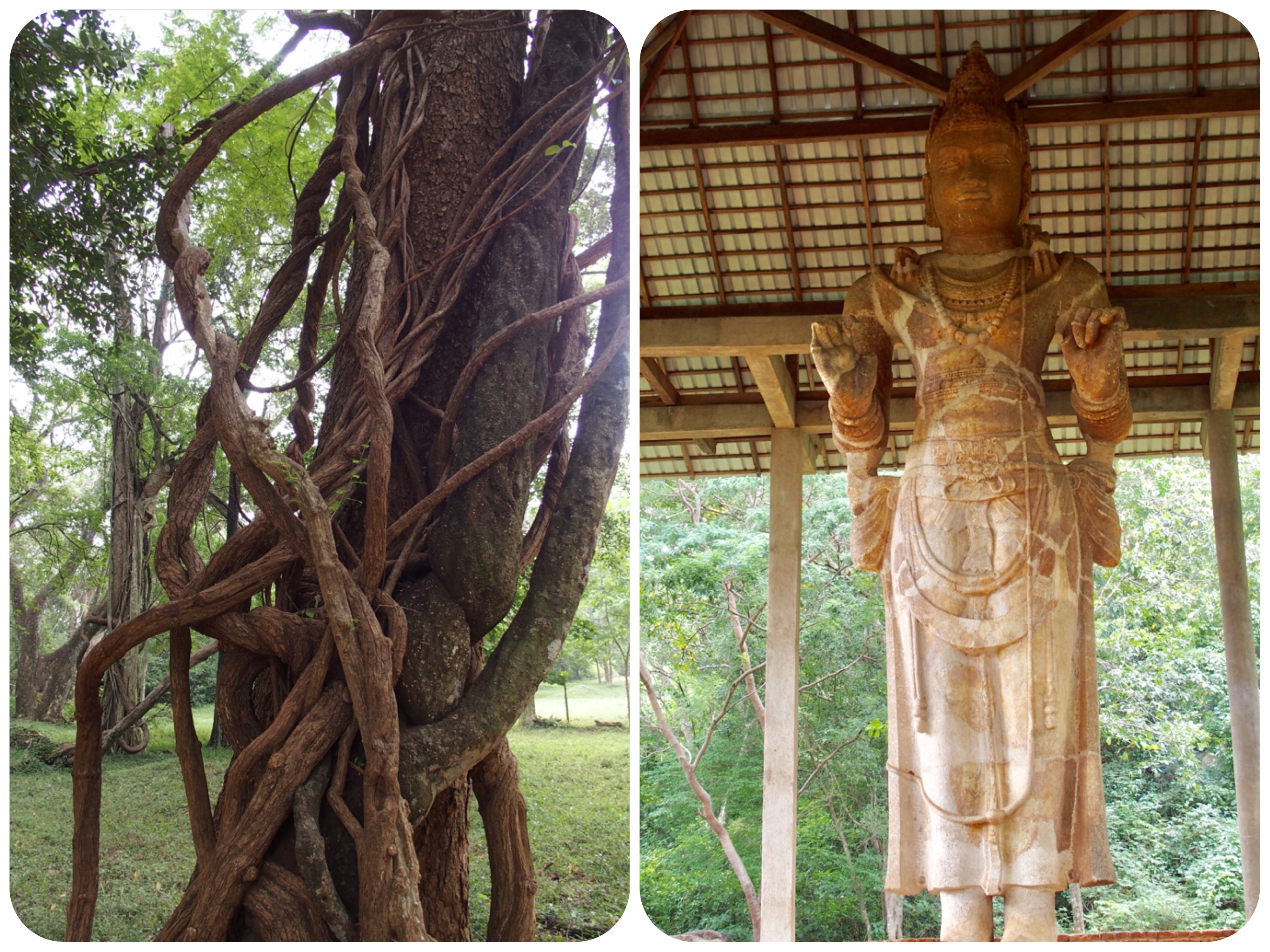 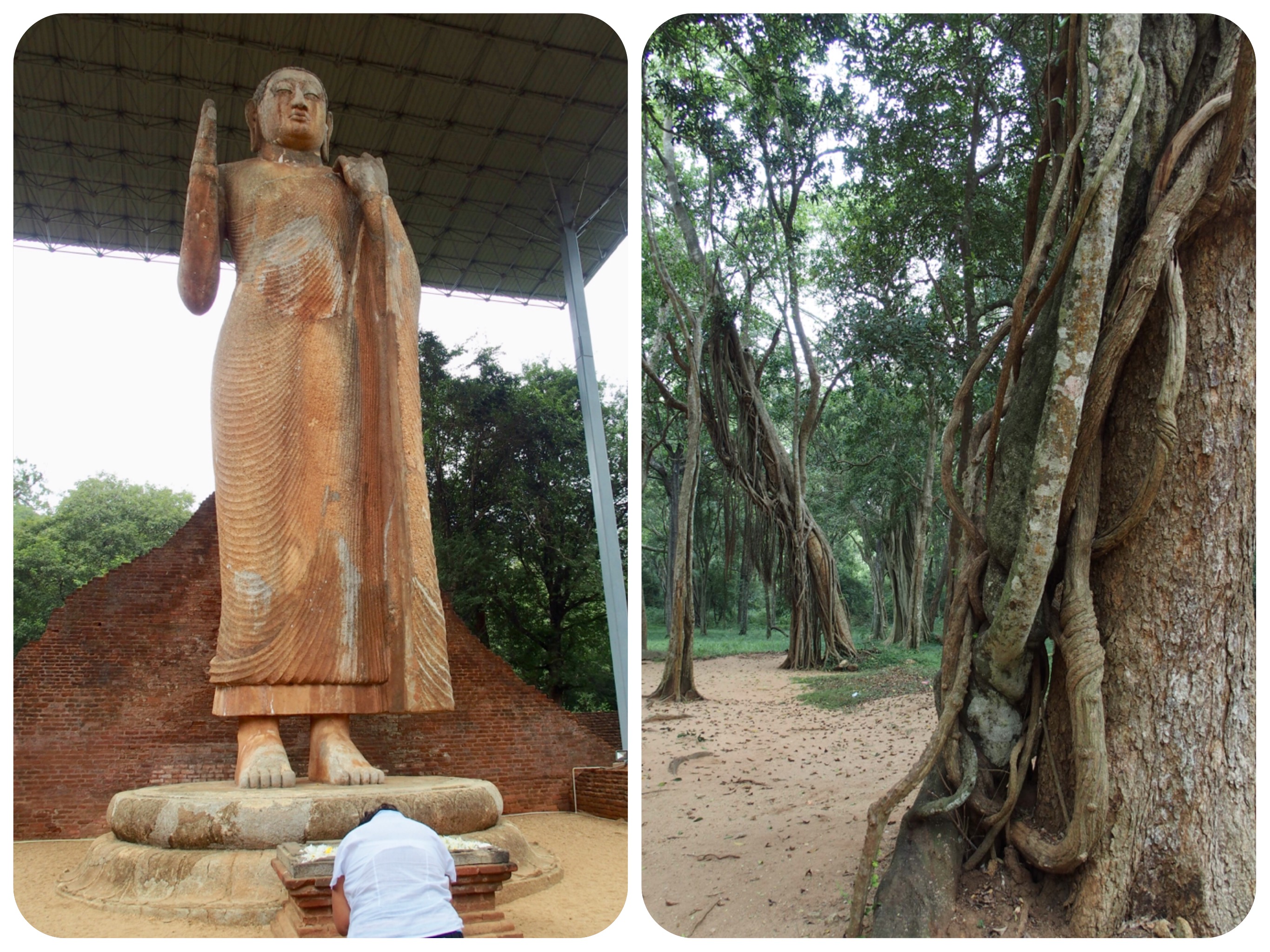 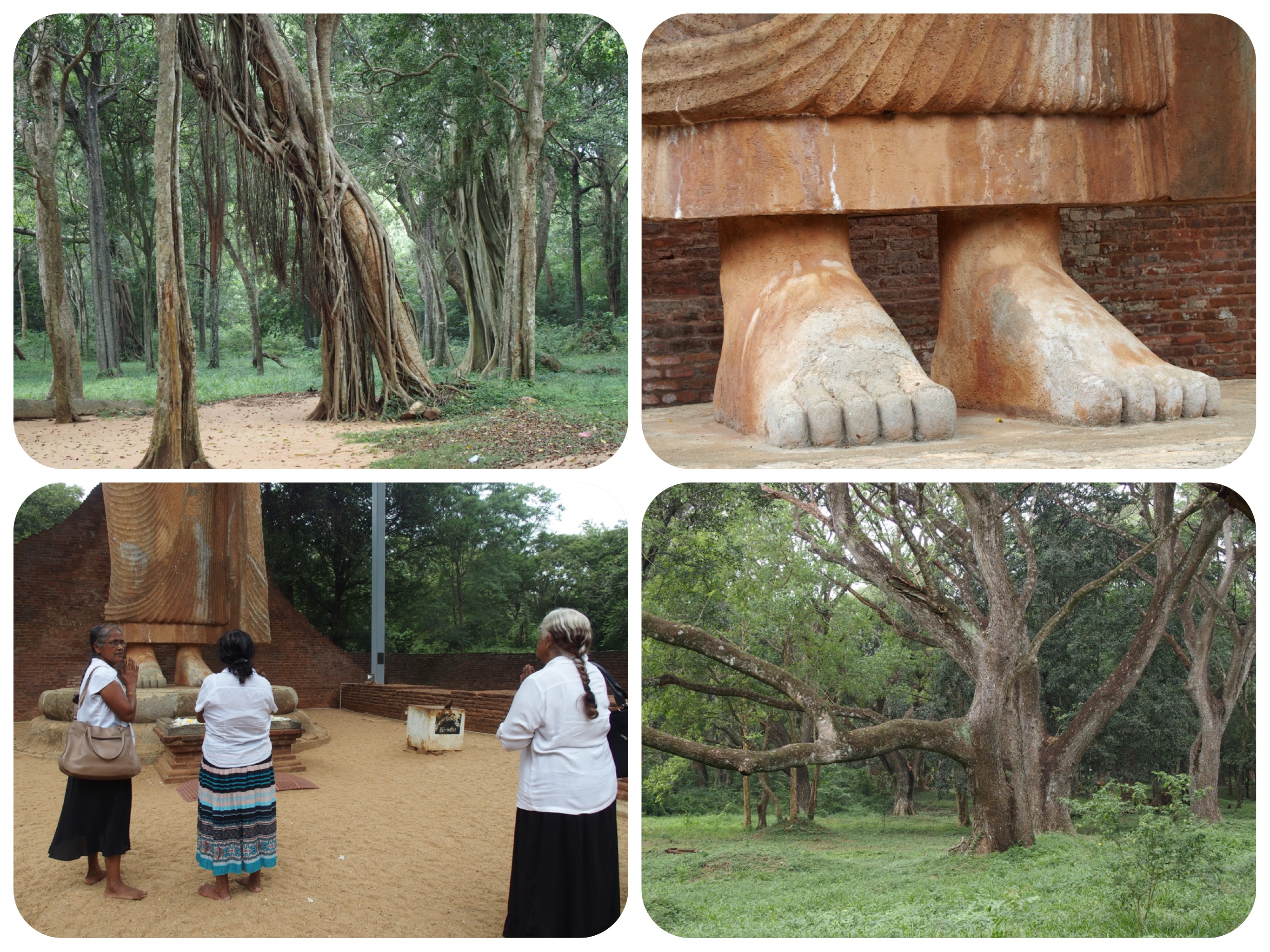 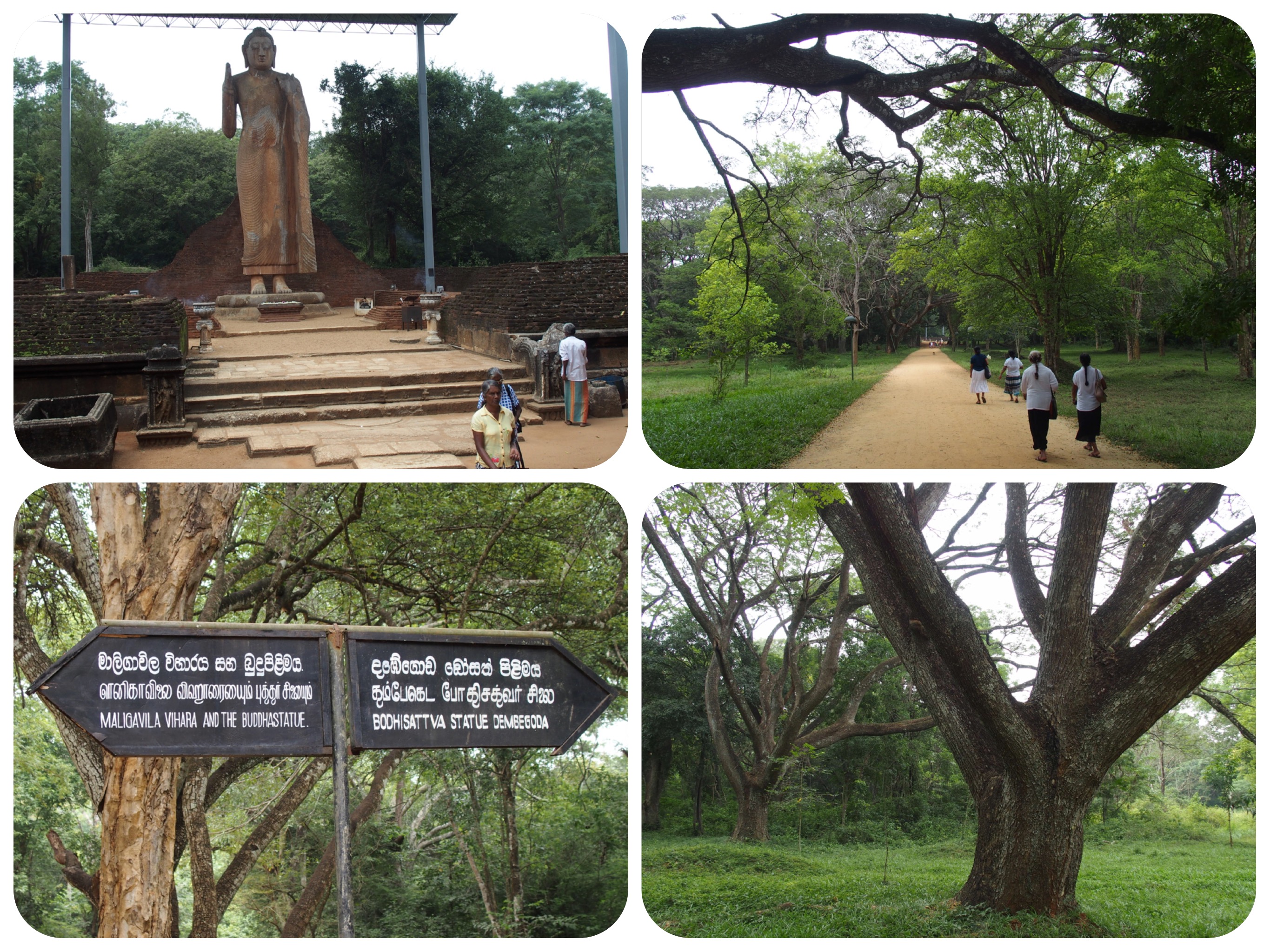 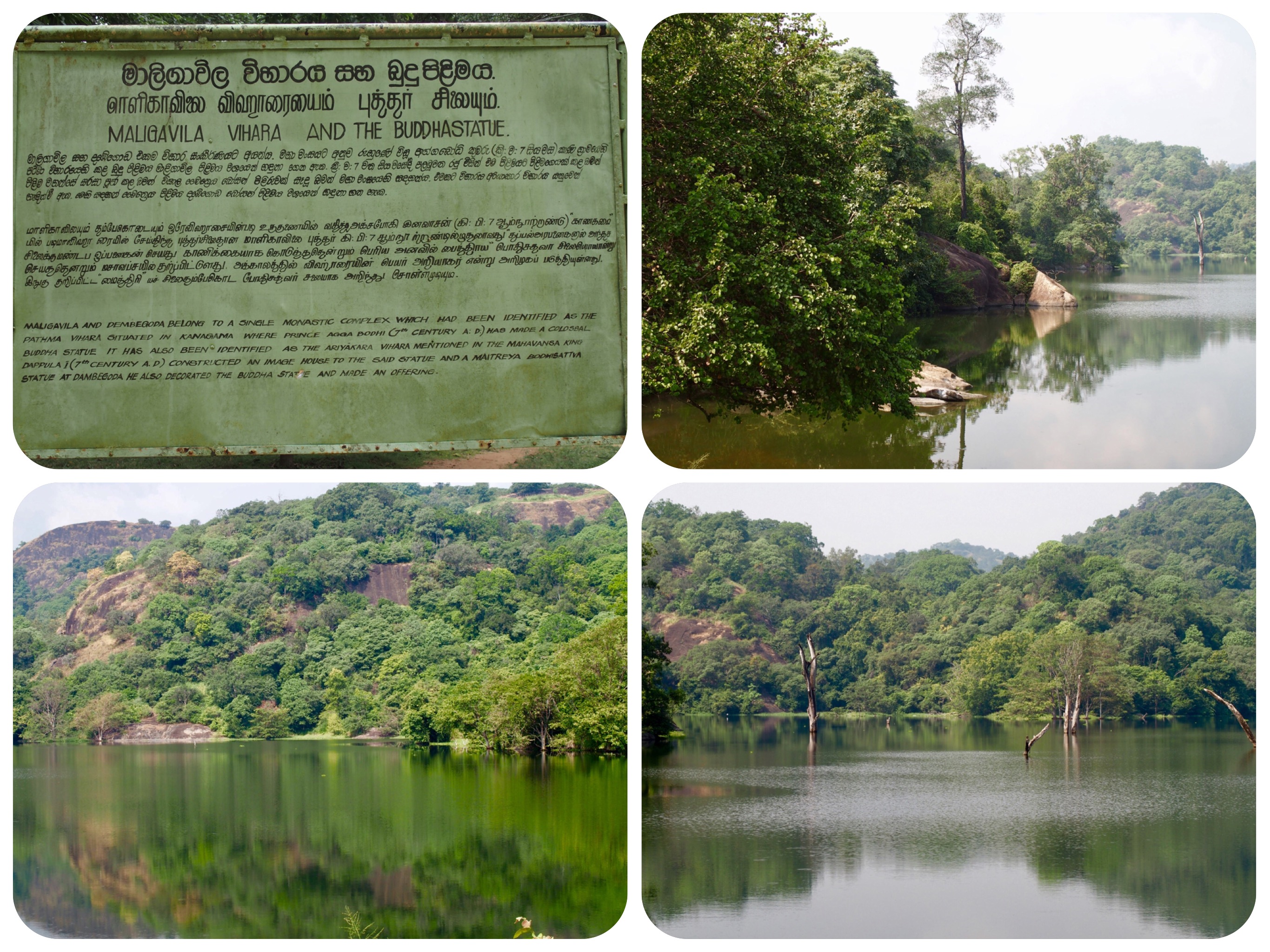 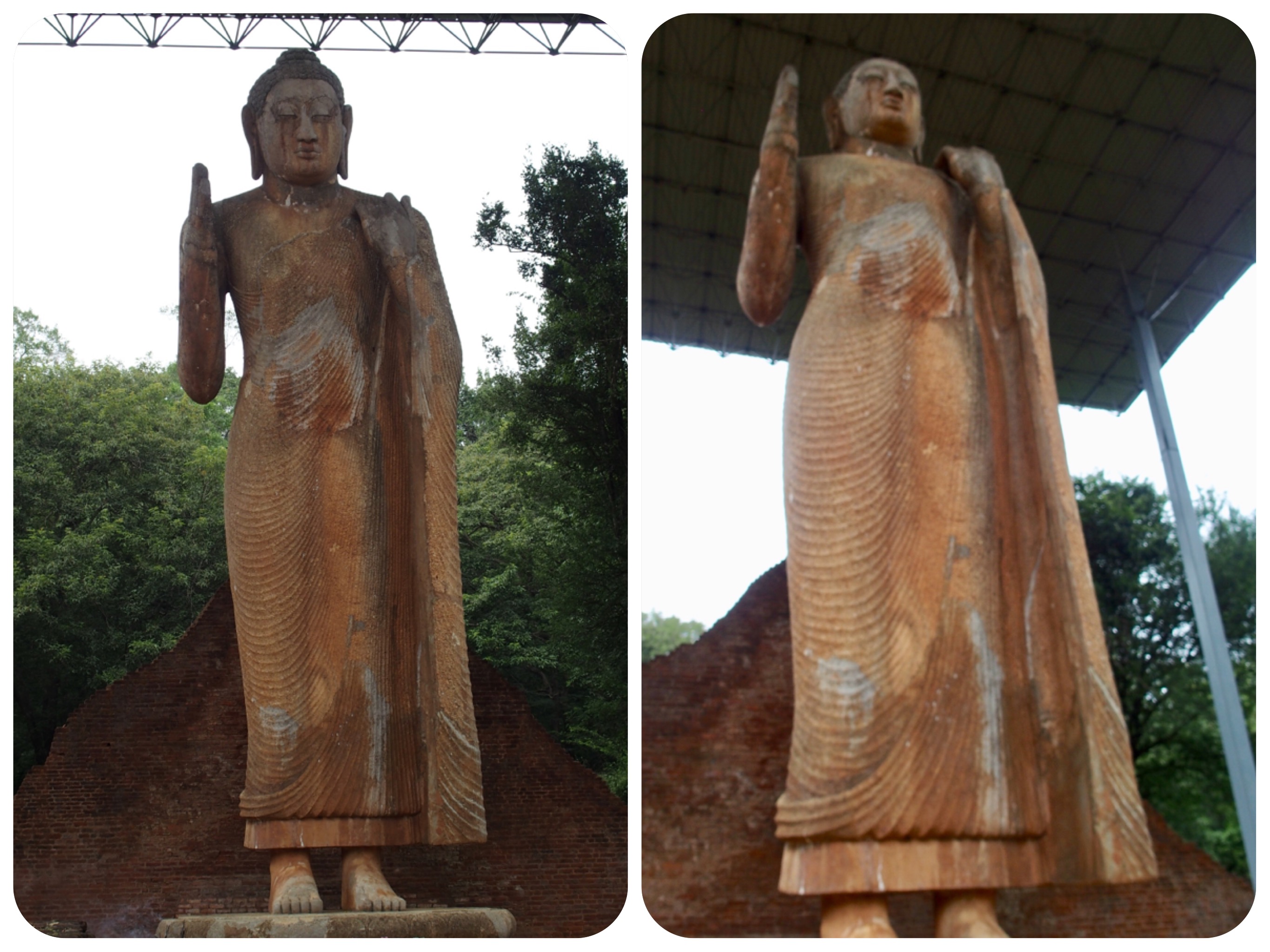 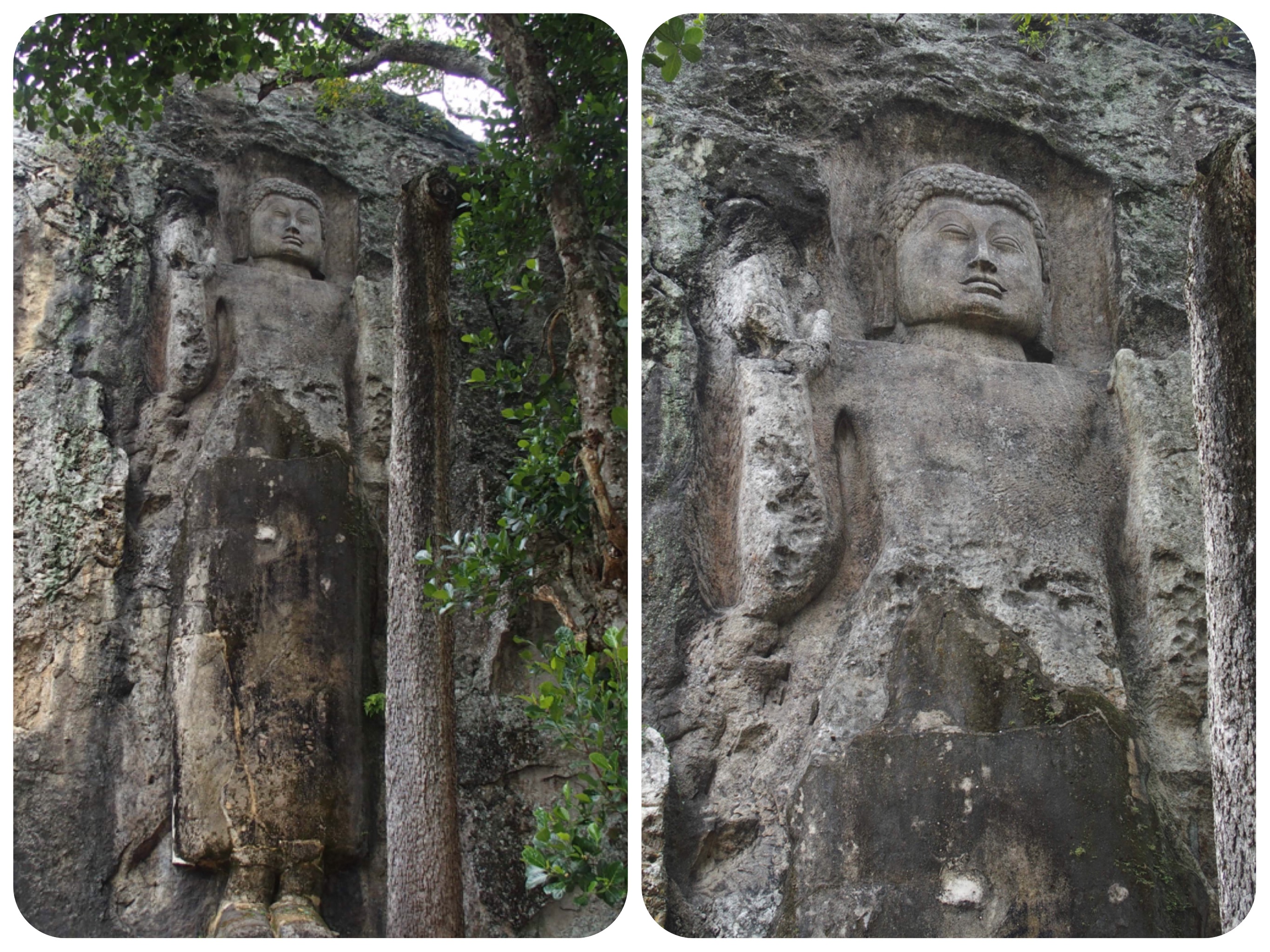 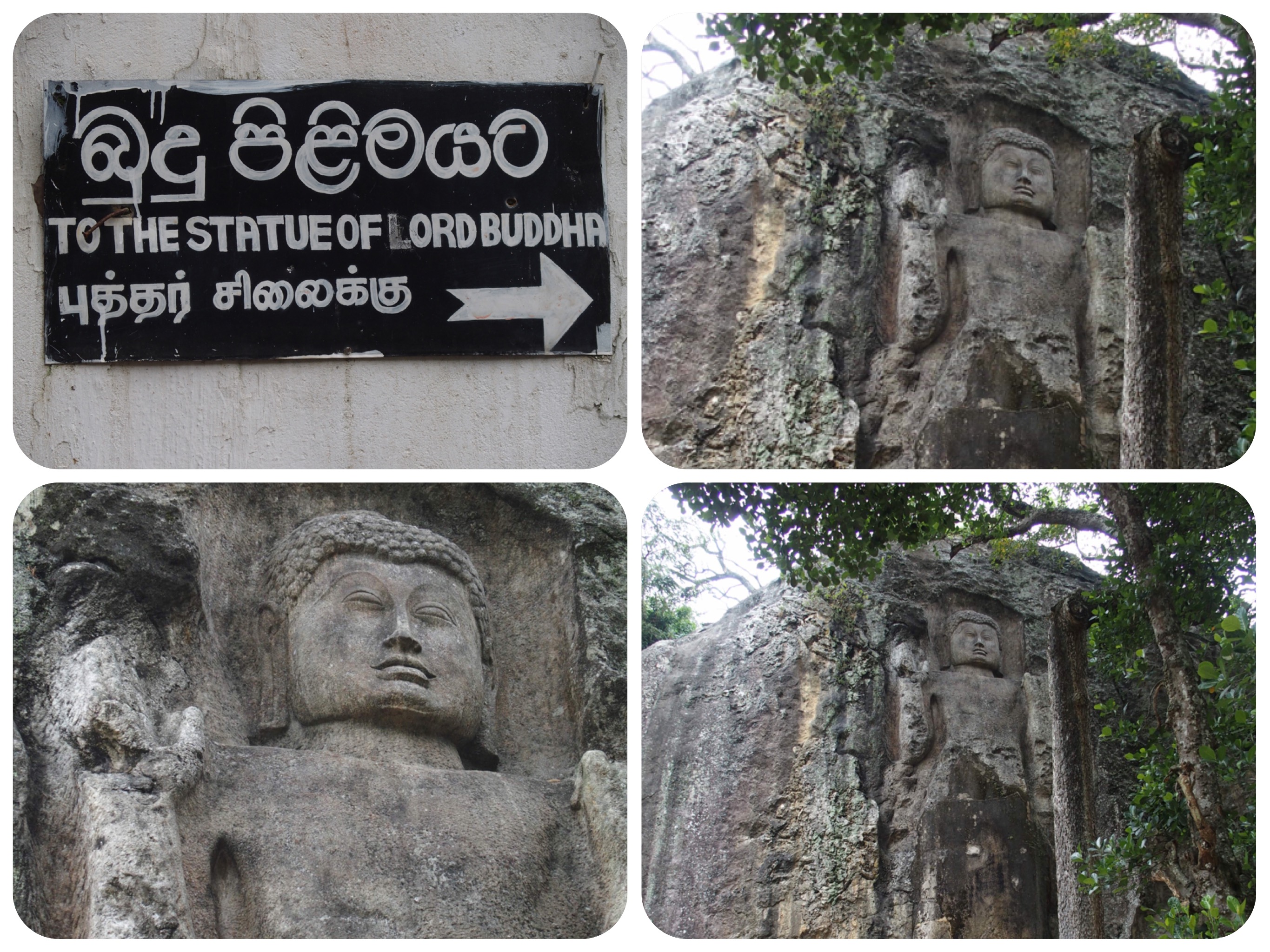 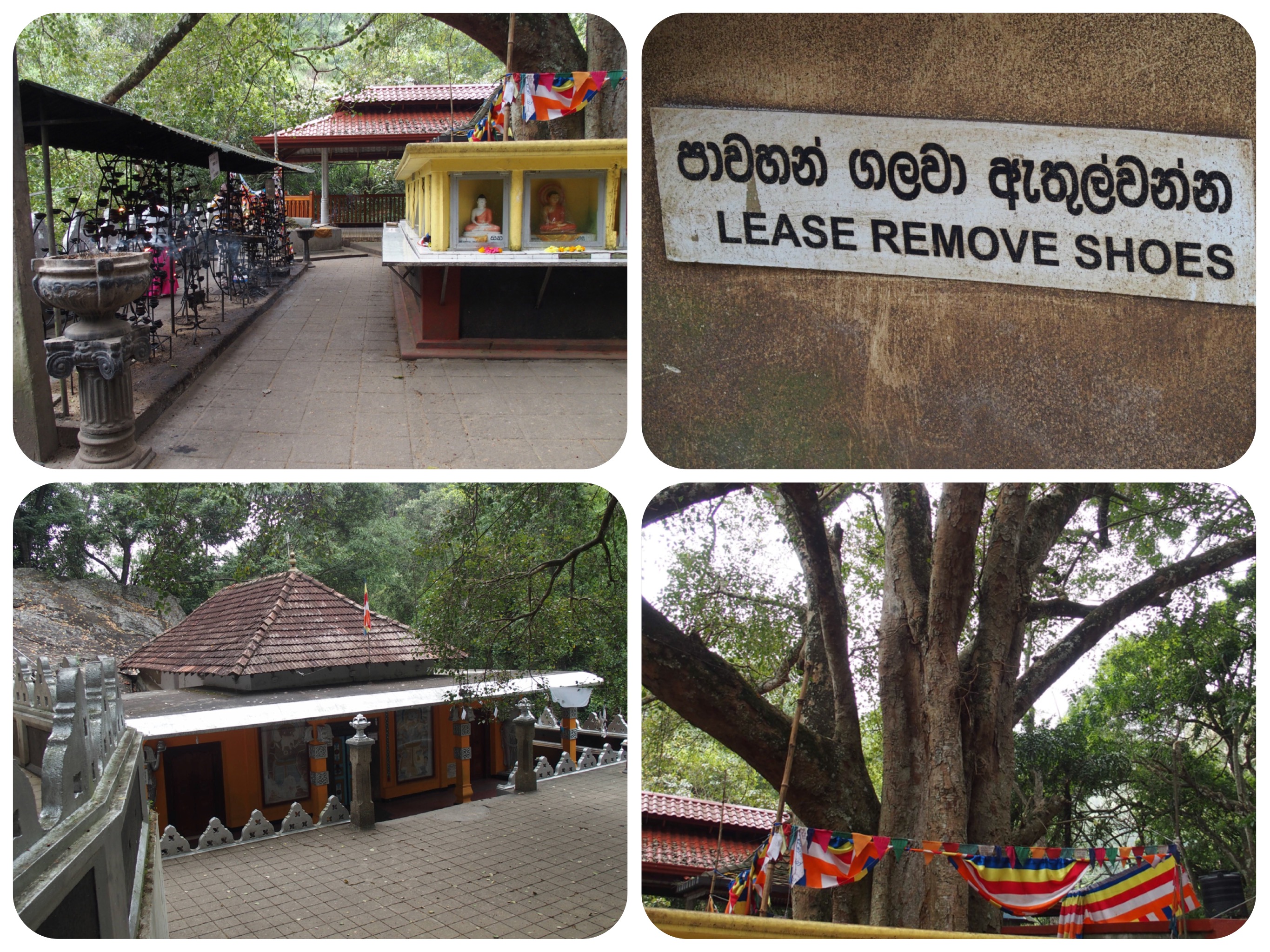 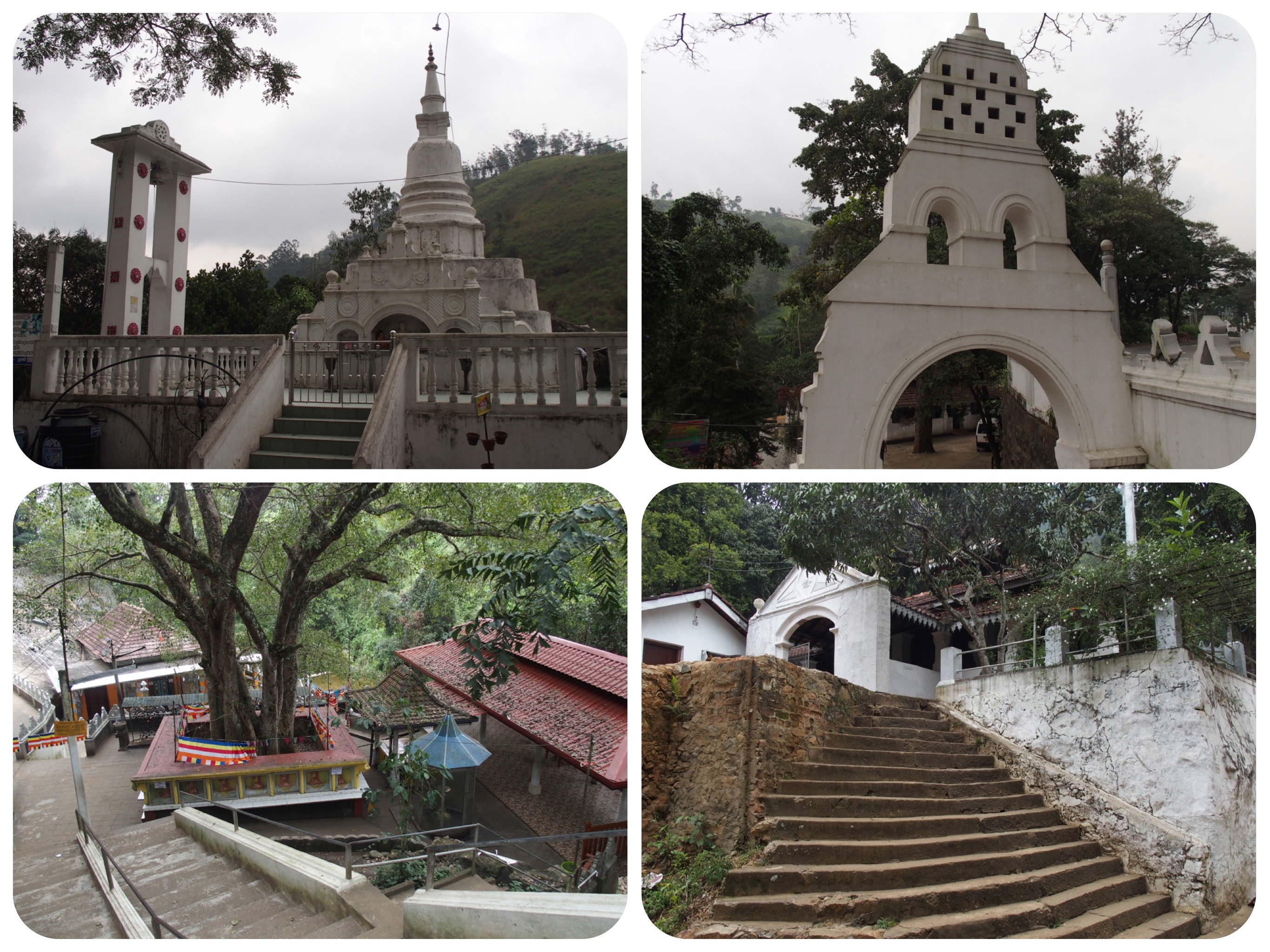 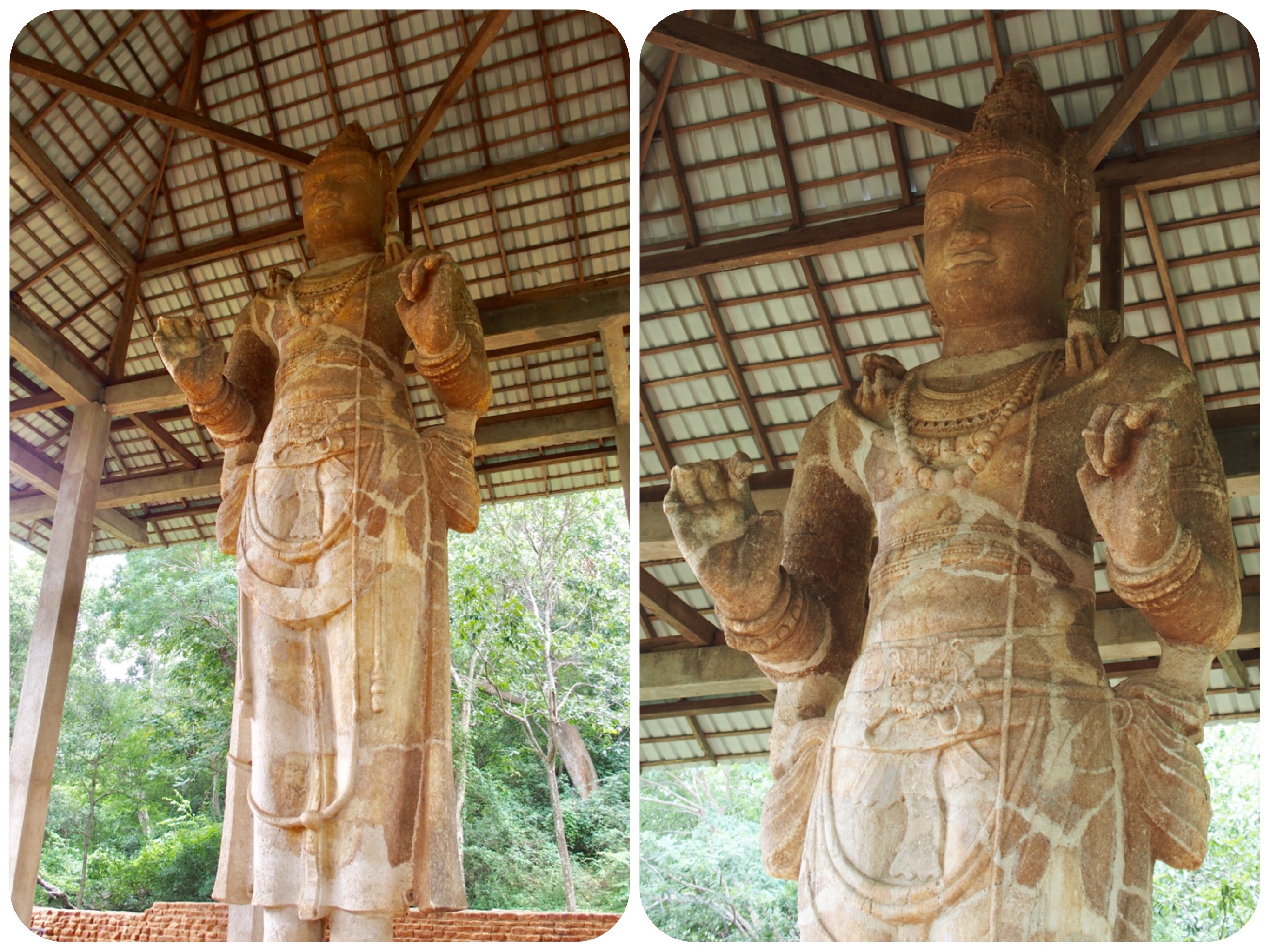 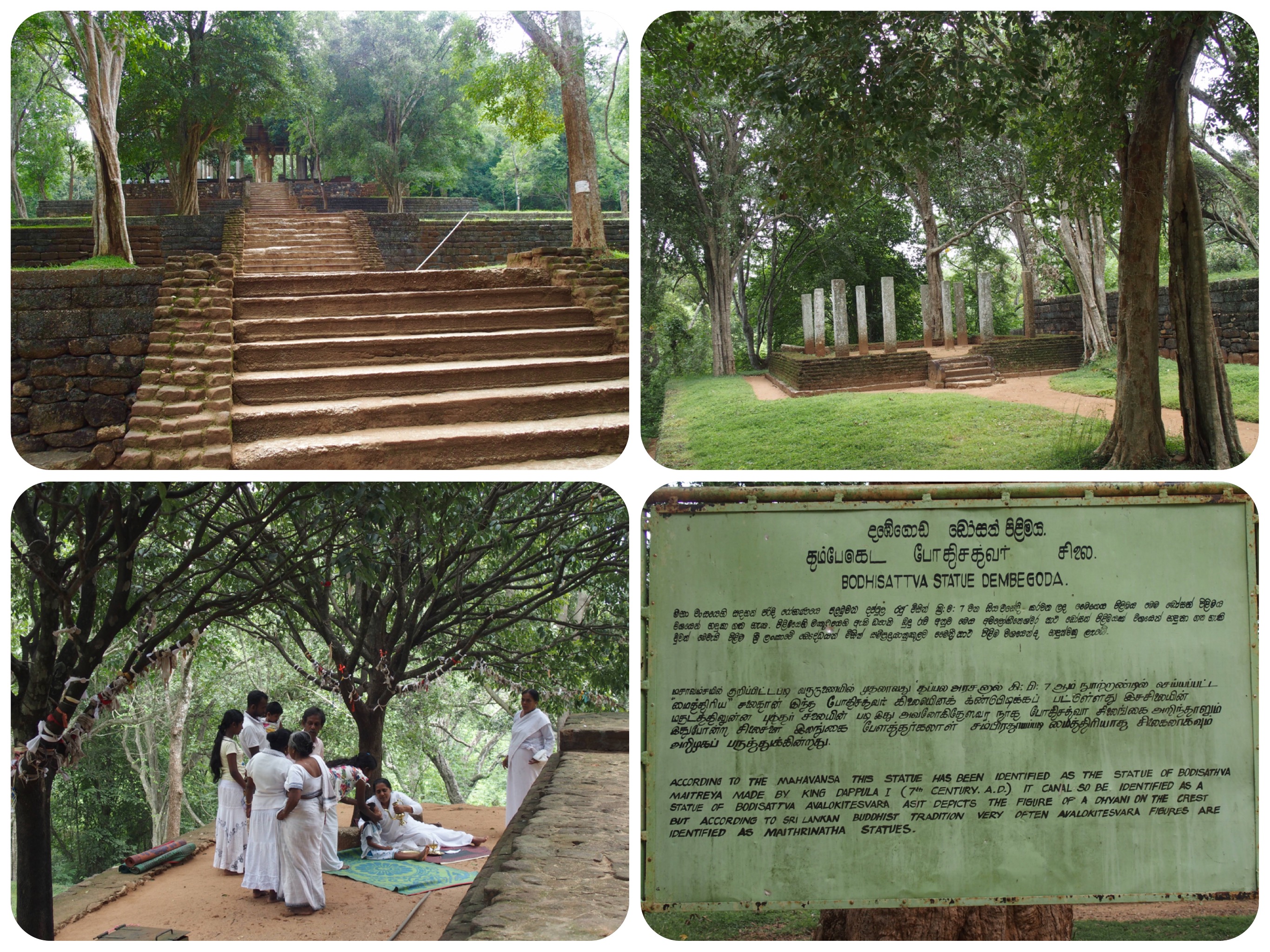 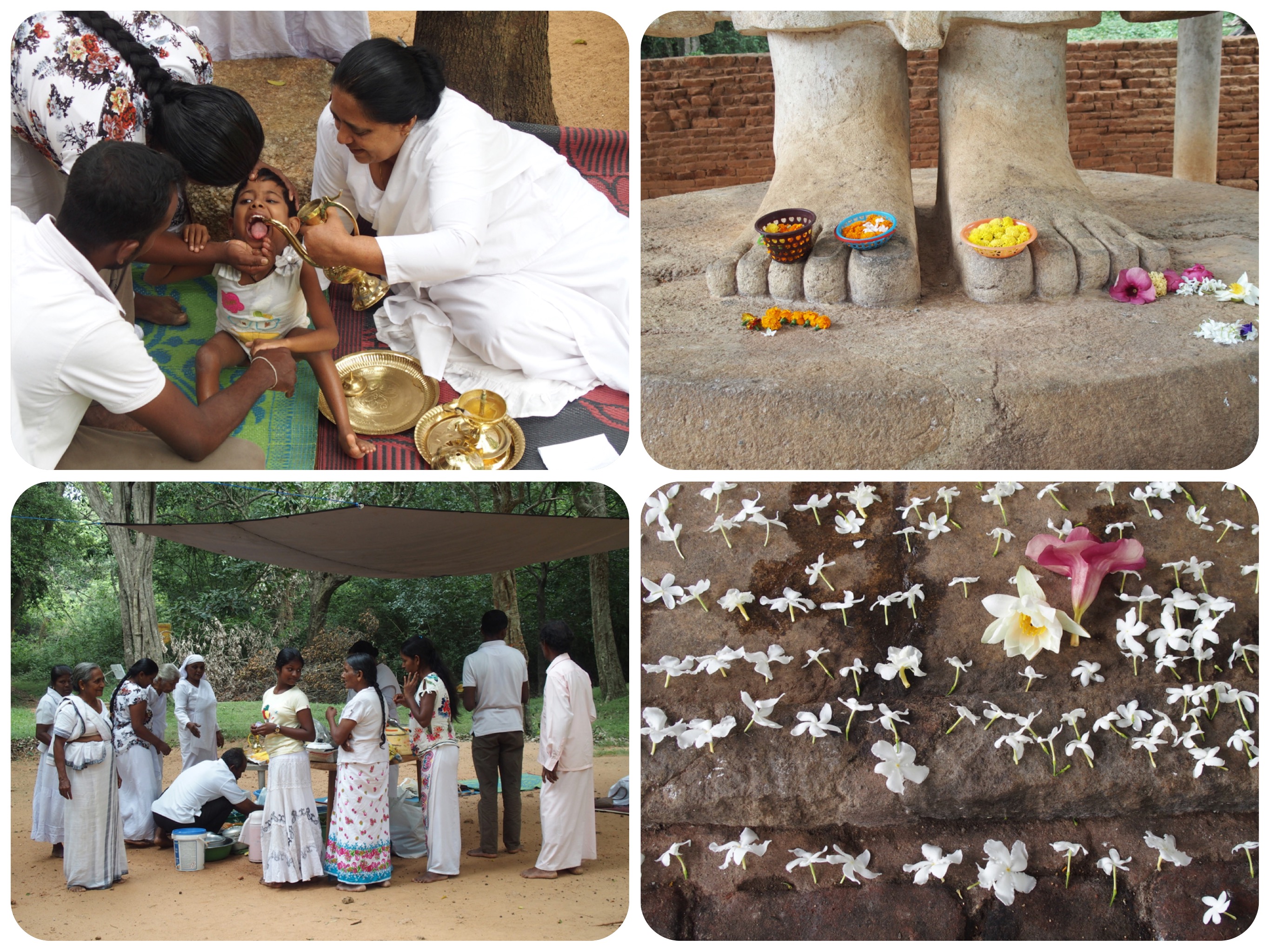 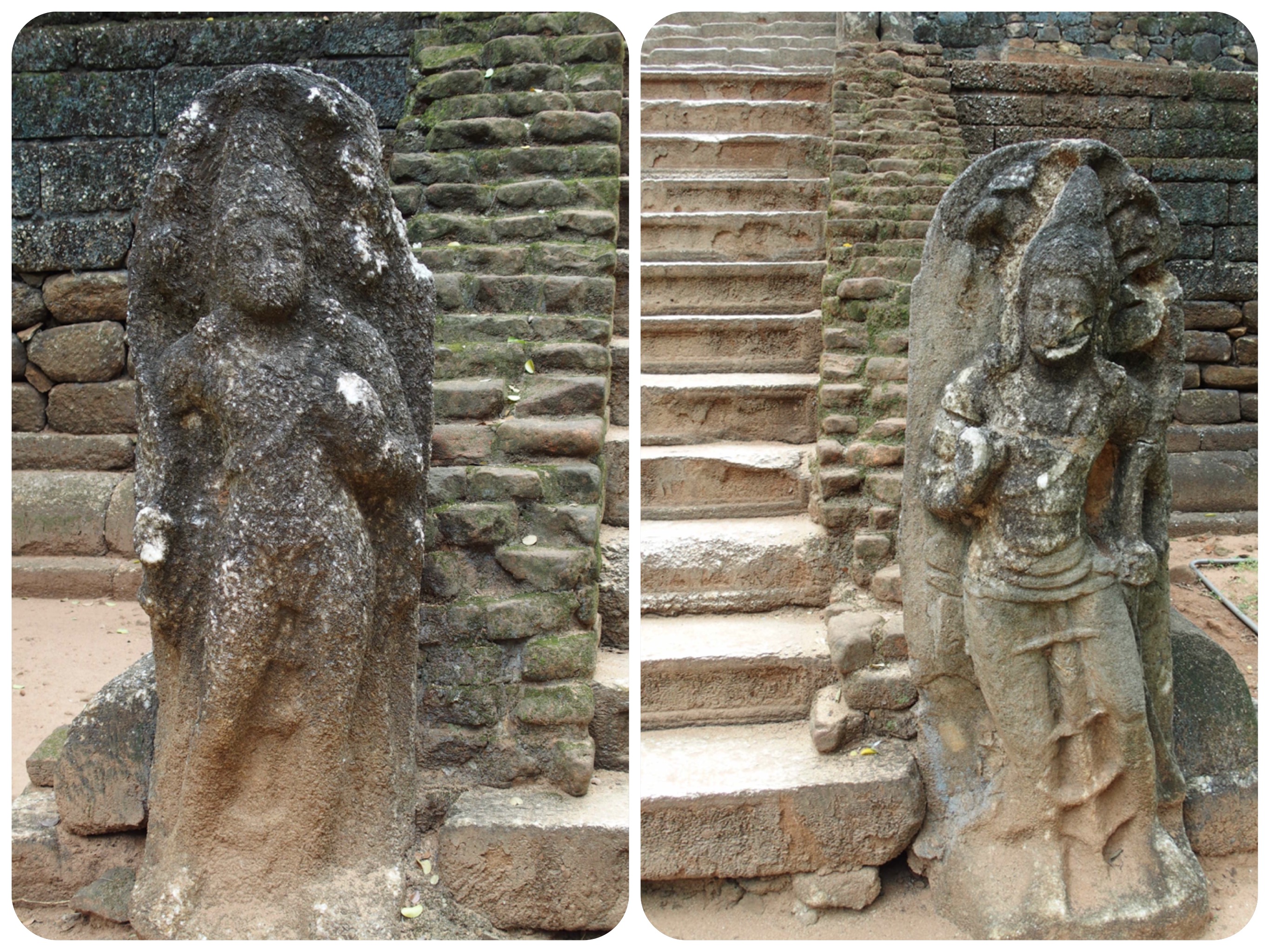 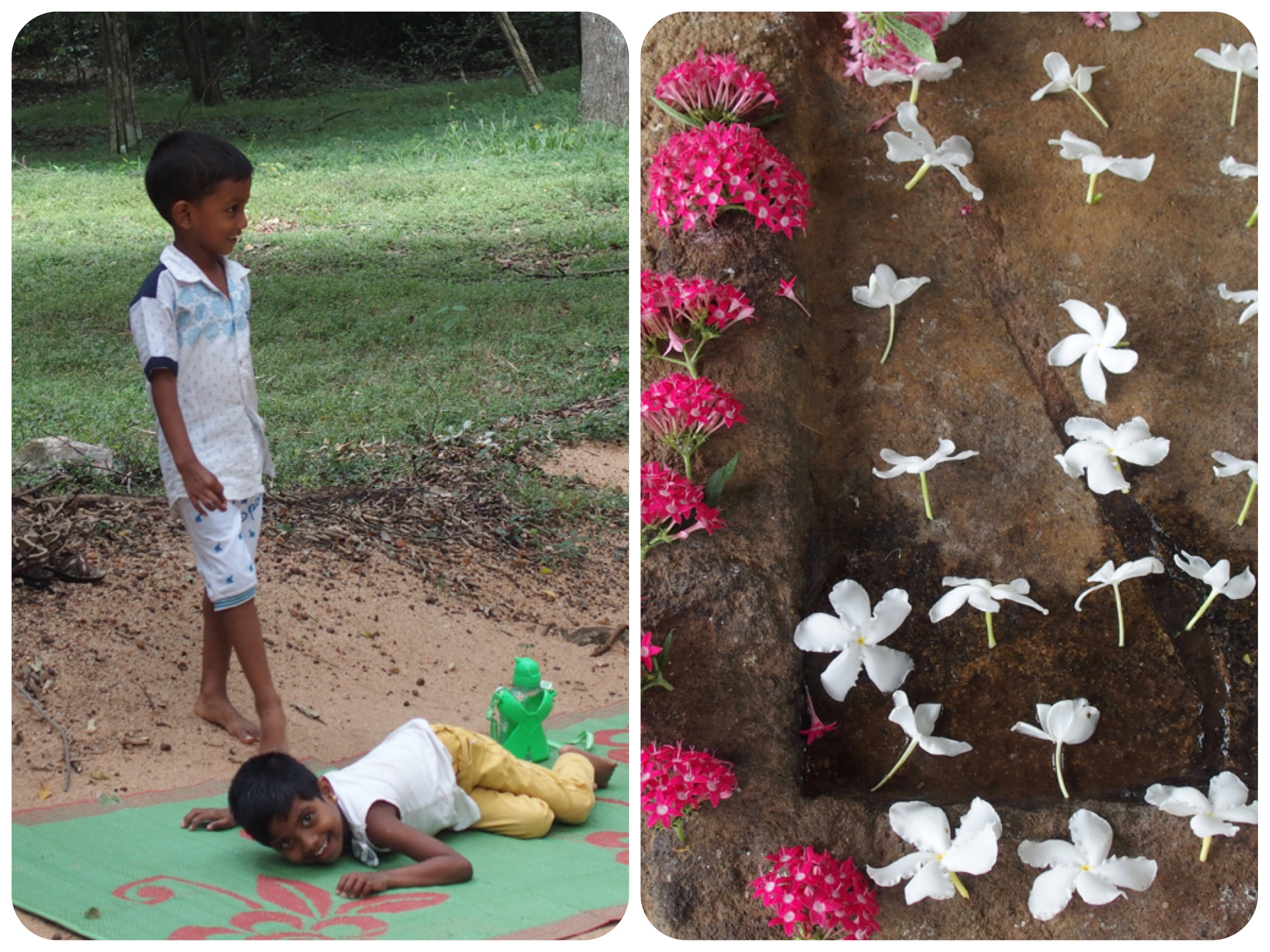 Ancient Rock Carvings in South Central Sri Lanka, and A Jataka Tale Of A Tortoise Who Loved Its Home Too Much

Hidden in the rural countryside of Sri Lanka, amidst thick jungles with old growth trees, there are large scale stone carvings that have stood there for centuries.

We visited several of these rock and stone carvings, over a period of two days, staying overnight in a lovely jungle resort.
They had a large, clean pool and fine dining served poolside.

In our cabin room, we had no walls, just thick bamboo trusses lined with mosquito netting, a great outdoor shower, a toilet and a ceiling fan.

While we were reading in our comfortable, king size bed, the turndown service arrived. It included tucking us into bed, while attaching a mosquito bed netting around us, and showing us how we can get out of the netting, should we need to pee during the night.

At night, we heard the sounds of the jungle and they lulled us to sleep.
The symphony included the cries of the peacocks, the songs of jungle birds, the calls of monkeys, the chirping of insects, and the sounds of the young buffalos.
It was very harmonic to me.

Located about 6km from Bandarawela, nestled amidst the hills, this historic cave temple complex was the sanctuary for King Walagamba.

The temple and the carvings date back over 2000 years.
This area is located within a ring of mountains, with a river which flows across the plateau.

The temple is modest, built on a rock, but it has a beautiful ornamental gateway with very unique paintings on each side.

Nearby, there is a large rock with a small white stupa on the top.
A 38 ft Buddha image is carved from the rock.
This image is not carved very deep into the rock, and there is some deterioration of the lower parts of the carvings.
Some say that the shallow carving is an indication that this carving was never finished.

Inside the temple there are paintings, belonging to the Kandyan era, which depict various Jataka stories.

The Jataka stories are a collection of 550 folk tales, dating back to 300 B.C., that carry a spiritual message or a moral for the people.

Located about 8km south of Wellawaya, Buduruwagala is by a lake in a forested area that is alive with wildlife.

The name literally means “Images of Buddha,” and it has the most impressive rock carvings of the ones I am describing here.

The complex consists of seven statues, and belongs to the Mahayana school of thought.
The statues date back to the 10th century AD, but no inscriptions have been found nearby to date it exactly, nor to indicate who created it or what kind of temple once existed here.

Perhaps it was a forest hermitage for monks and nuns, who wanted to do their spiritual practices without being disturbed by the outside world.

The gigantic Buddha statue still bears traces of its original stuccoed robe and some orange color, suggesting that once, all these images were brightly painted.

The central image is of the Buddha.
To His right, there are three images; the middle one is the Bodhisattva Avalokitesvara, (the bodhisattva of compassion), and at his side is his female consort, Tara, and Prince Sudhana.

Prince Sudhana is also mentioned in the Jataka tales, as a prince who fell in love with one of seven beautiful Kinnari, who were half women, half birds, who came to earth to bathe in a clear lake and got captured.

The main figure of three on the left of the Buddha is thought to be Maitreya, the future Buddha, who is standing in the center.

To the Maitreya’s left stands Vajrapani, a Bodhisattva who is a protector and guide of Gautama Buddha.
Vajrapani always holds a vajra, which is an hourglass-shaped thunderbolt symbol.

This vajra is a very unusual symbol in Sri Lanka, and it is rarely found on the island, although this Tantric symbol of power is a very common in Tibetan Buddhism, and is often seen in Bhutan, China and Tibet.

The figure to the left of Maitreya is believed to be either Vishnu or Brahma.

Several of the rock carving figures hold up their right hands with two fingers bent down to the palm – a Mudra which encourages and beckons people into the wisdom of Buddhism.

The stone images in Maligawila and Dambegoda are located a short walking distance from one another.

These massive stone statues are thought to have been created in the 7th century A.D., and to have been part of a huge forest temple complex.
Both statues suffered much damage through the years, and laid face down, on the forest ground, for centuries, which is now thought to have actually helped to preserve the facial details of the statues.

One must wonder how, in the year 700 AD, the monks were able to quarry a 60 ton slab of stone out of the Far hills, bring it to the temple location and carve it, then raise it up into a standing position, all without any heavy equipment…

Perhaps this was a massive human group effort…. but maybe it was one of those mind over matter spiritual powers that these hermit monks might have acquired through spiritual practices…

Here are the details:

Located about 15 km to the south of Monaragala.
The location is popular because of the two colossal stone statues of Buddha, which date back to the 7th century A.D.

Both statues are carved from crystalline limestone, taken from the cliffs in the area.

One of the statues is 11 meters high and is considered to be the world’s largest free standing Buddha figure.

It was found broken into three pieces, and was restored with a red brick arch to support it from its back side.

Located about 1km from the Maligawila Buddha statue stands the massive stone statue of Avalokitheswara, the Bodhisattva of compassion.

It is 10m high and is believed to be of a Divine Being who chooses to incarnate and reside in the human realm, in order to help people attain Enlightenment.

This Avalokitheswara looks grand with Her jewelry and fineries, and it radiated so much glowing light, that in the past, marauders believed that there were real jewels hidden inside the statue.

As a result, in later years the marauders blew up the statue with dynamite.
No jewels were hidden inside.
The statue broke into 117 pieces that laid scattered in the jungle, until the extensive restoration job was completed.
It now looks wonderful, and hopefully will stay looking glorious for centuries to come.

Near the Avalokitheswara statue, we saw a large group of people who had come to worship, perform pujas, have lunch and picnic at this holy site.

I think it is wonderful that most of the temples we have visited are still used by the people as blessed places to worship, and have not become museum pieces open only to those who have the funds to pay.

These temples and carvings were always made FOR the people, and if in the attempt to preserve them we end up keeping the people away, the places will lose their original holiness.

As promised, here is a tale from the Jataka which I have arbitrarily chosen.
Or maybe I chose this because it fits my own belief that we grow and stretch higher when we do not cling to the familiar, to what is comfortable, but like me, when we become nomads, roaming the earth in search of wisdom and spiritual Truth….

I have changed some of the wording of the tale to make it easier to understand, but the moral of the story is the same.

The Tortoise That Loved His Home Too Much

Once upon a time, when Brahmadatta was reigning in Benares, a Bodhisatta was born in a village as a potter’s son.
He worked making clay pottery, and soon he had a wife and family to support.

At that time, there was a great natural lake close by the great river of Benares.

When there was much water, the river and lake became one, but when the water was low, they were apart.

Now fish and tortoises know by instinct when the year will be rainy, and when there will be a drought.

So at the time of our story, the fish and tortoises who lived in that lake knew there would be a great drought coming, and when the river and lake were one water, they swam out of the lake and into the river and onwards toward the sea.

But there was one tortoise that would not leave the lake to go into the river.

He said: “Here I was born, and here I have grown up, and here are my parents, my friends and my home.
Leave it I cannot!”

Then when the hot season arrived, the water in the lake all dried up.

The tortoise dug a hole and buried himself in the moist clay, hoping to preserve himself with the moisture in the clay until the rainy season came again.

Sadly, it was the same place where the Bodhisatta was used to coming, to dig for clay.

One day, the Bodhisatta came to get some clay.
With a big spade he dug down, and accidentally cracked the tortoise’s shell, turning him out on the ground, as though he were a large piece of clay.

In his agony, the tortoise moaned:
“Here I am, dying, all because I was too fond of my home to leave it, even though I knew the drought was coming.

Here was I born, and here I lived, thinking it is my refuge.
And now the clay in which I seek my refuge, has played me false in a most grievous way.

Thee, I call, oh Bhaggava, hear what I have to say!

Go where you CANNOT find comfort.
Leave the place where you believe happiness resides.

Wherever the place may be,
Be it forest or a village,
Anywhere, the wise can find her home
And there, her new birthplace will be.

Go where there is life,
Do NOT stay at home for death to master thee…”

And with these words, the tortoise exhaled his last breath and passed on.

The Bodhisatta picked him up, and gathering all the villagers together, addressed them thus:
“Look at this tortoise.
When the other fish and tortoises went into the great river, he was too fond of home to go with them.

When the drought came, he buried himself in the place where I get my clay.

Then as I was digging for clay, I broke his shell with my big spade, and turned him out on the ground in the belief that he was a large lump of clay.

Then the tortoise recalled to mind what he had done, lamented his fate in a few verses of poetry, and expired.

So you see he came to his end because he was too fond of his home.
Take care not to be like this tortoise.

Don’t say to yourselves:
“I am so blessed, I have sight, I have hearing, I have smell, I have taste, I have touch, I have a son, I have a daughter, I have numbers of men working for me and maids for my service.
I have social standings and precious gold.”

Do not believe that these things offer you protection and joy and are to be craved and desired.
Seek only the Eternal Truth, for the things of the world all pass away through the three stages of existence.”