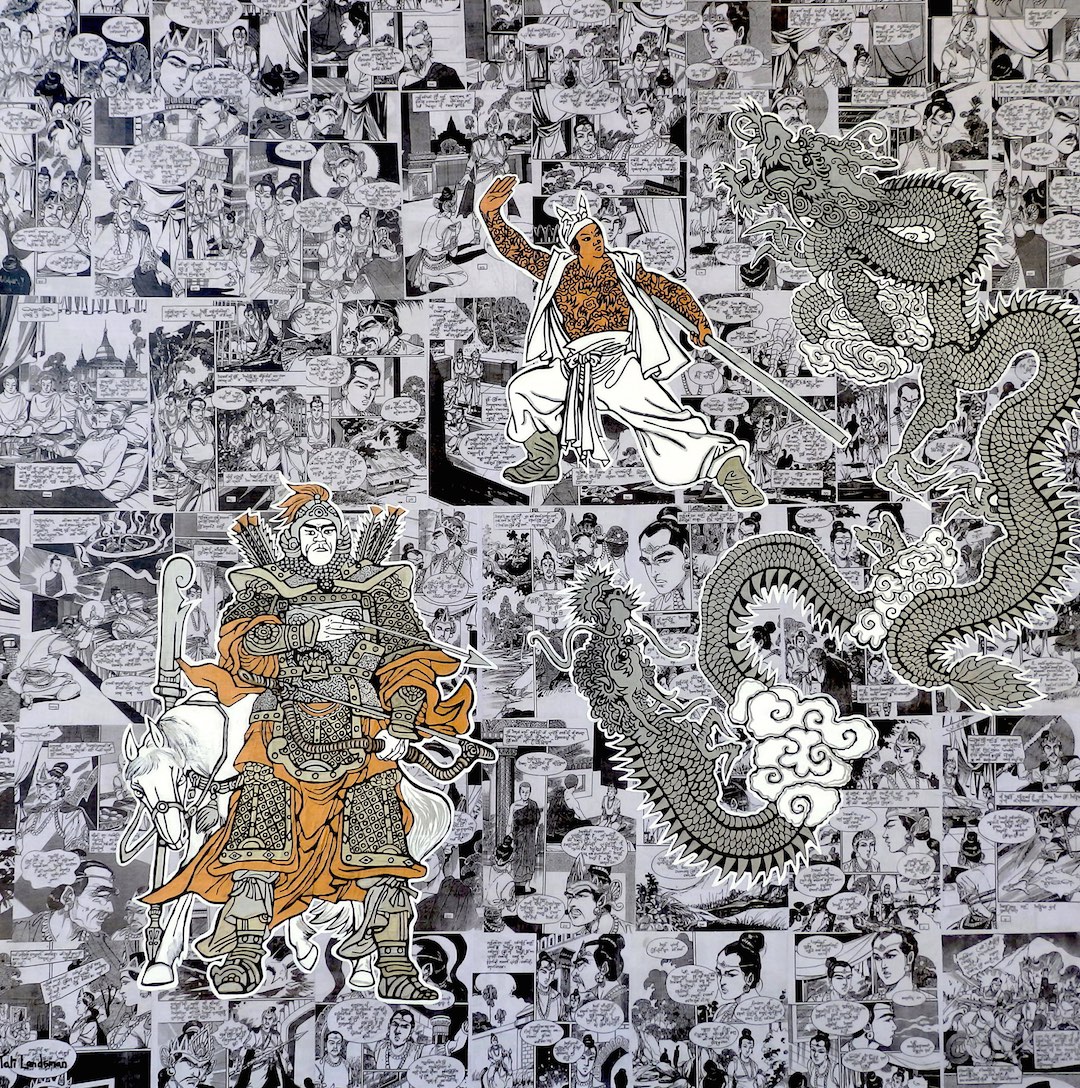 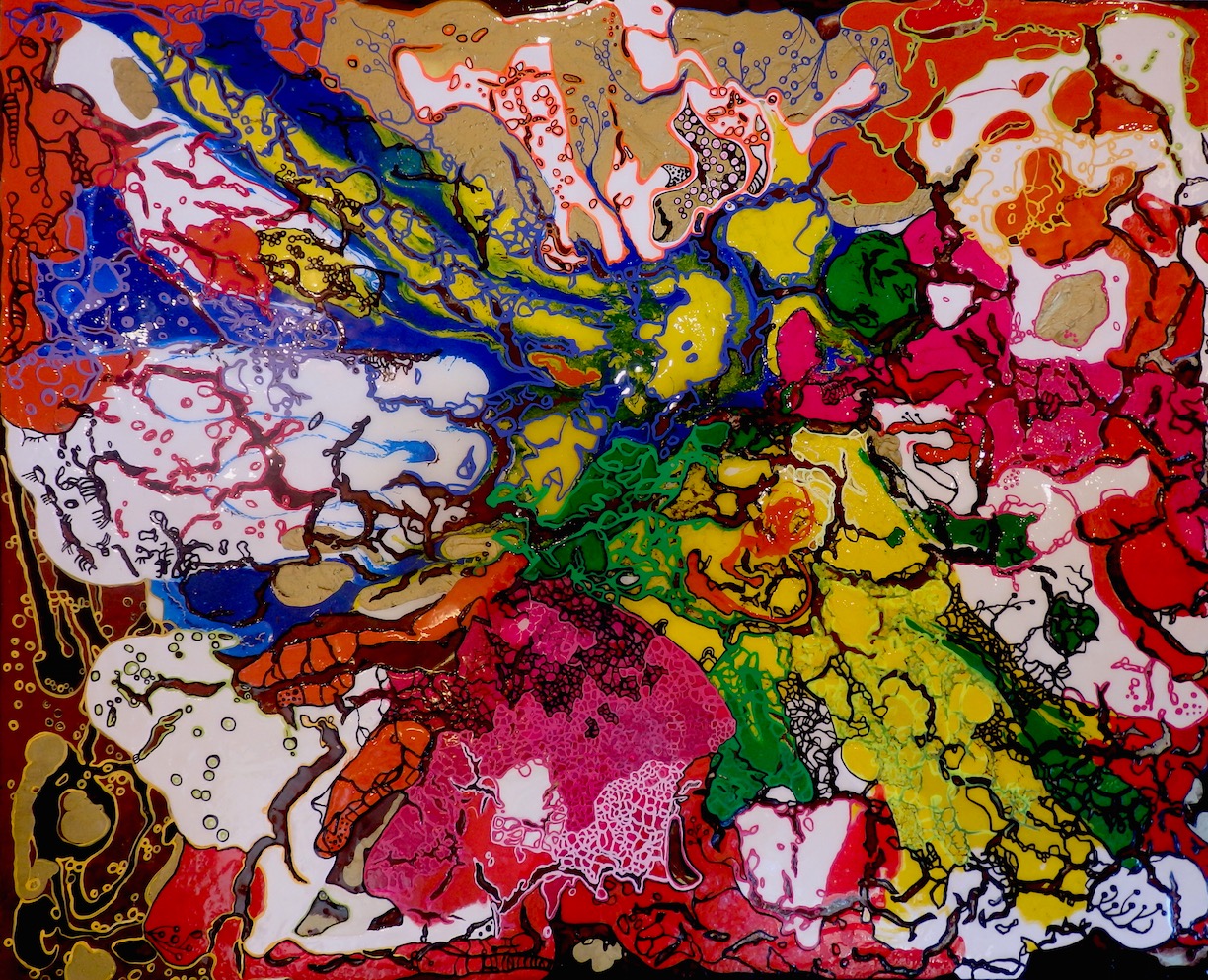 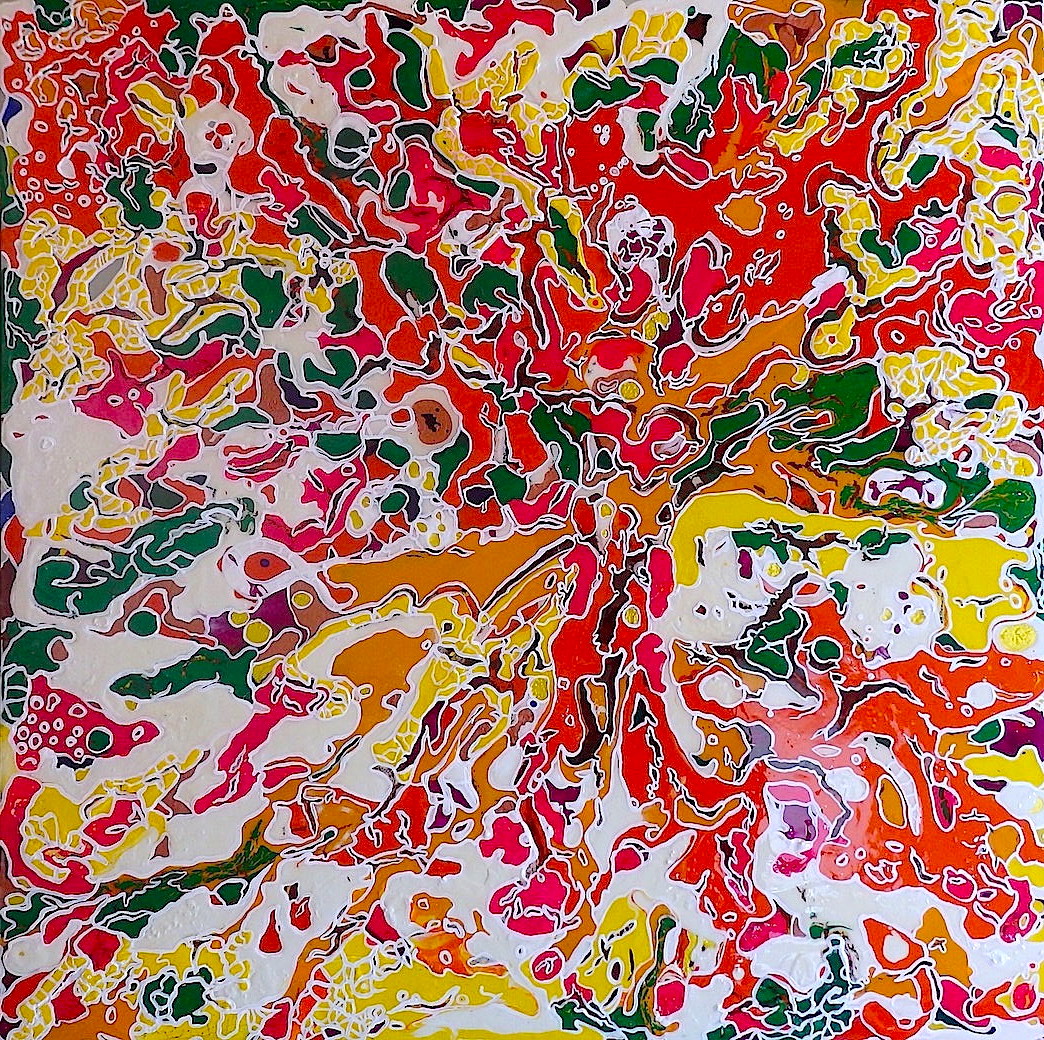 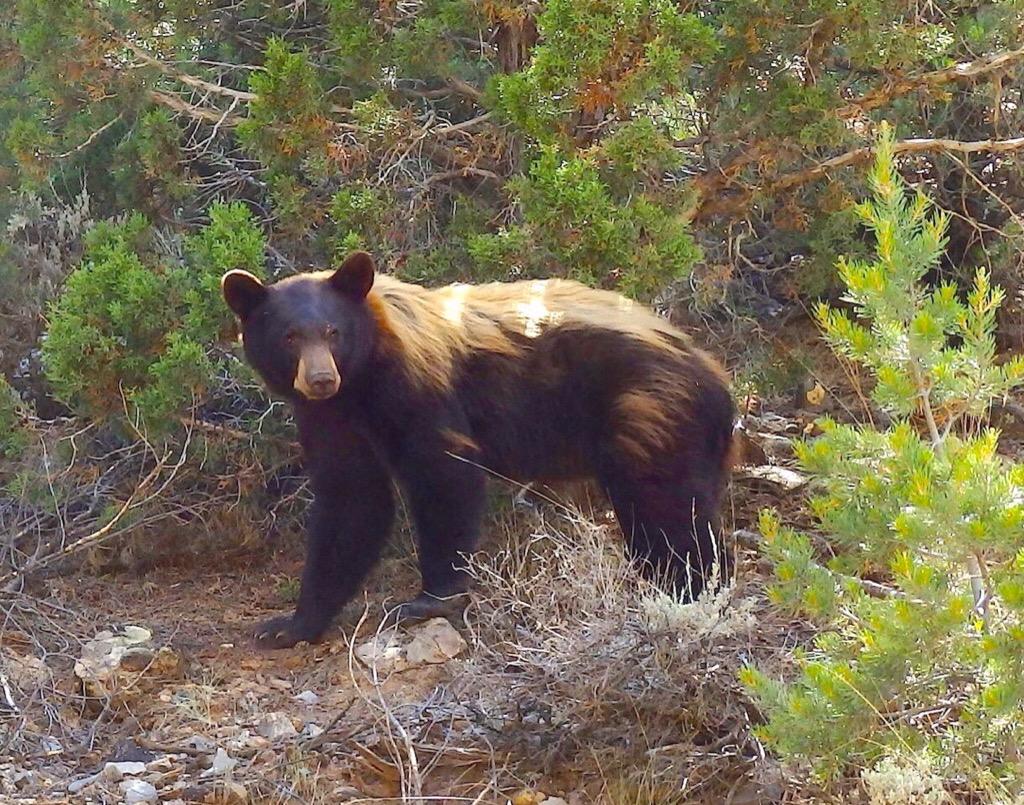 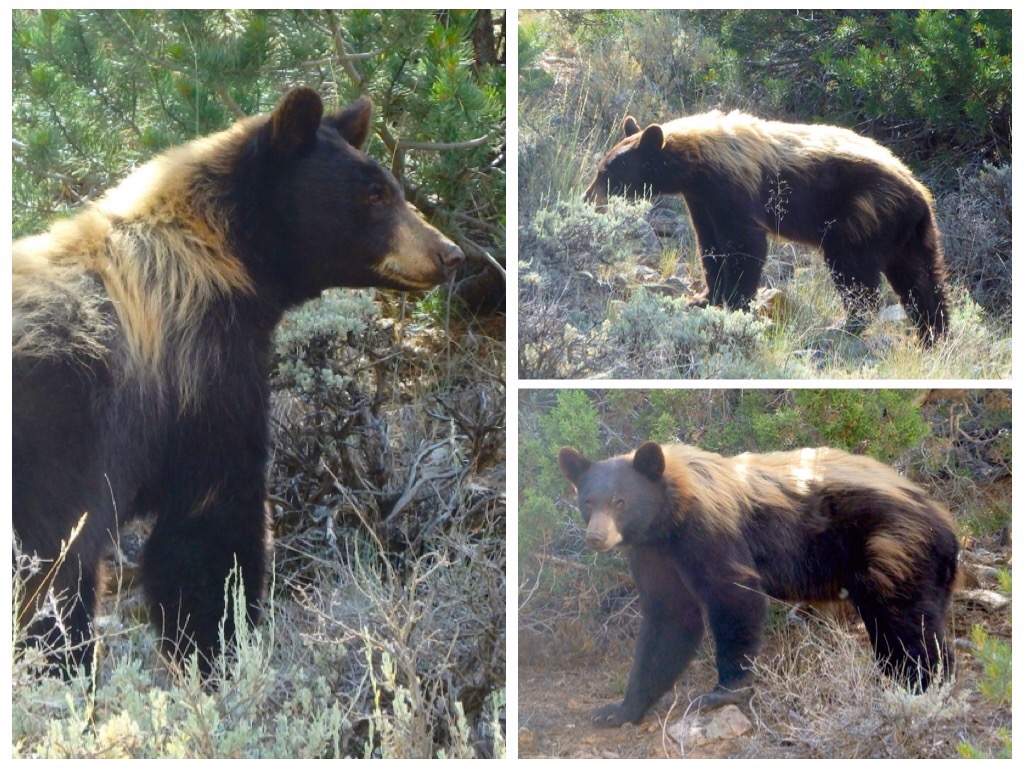 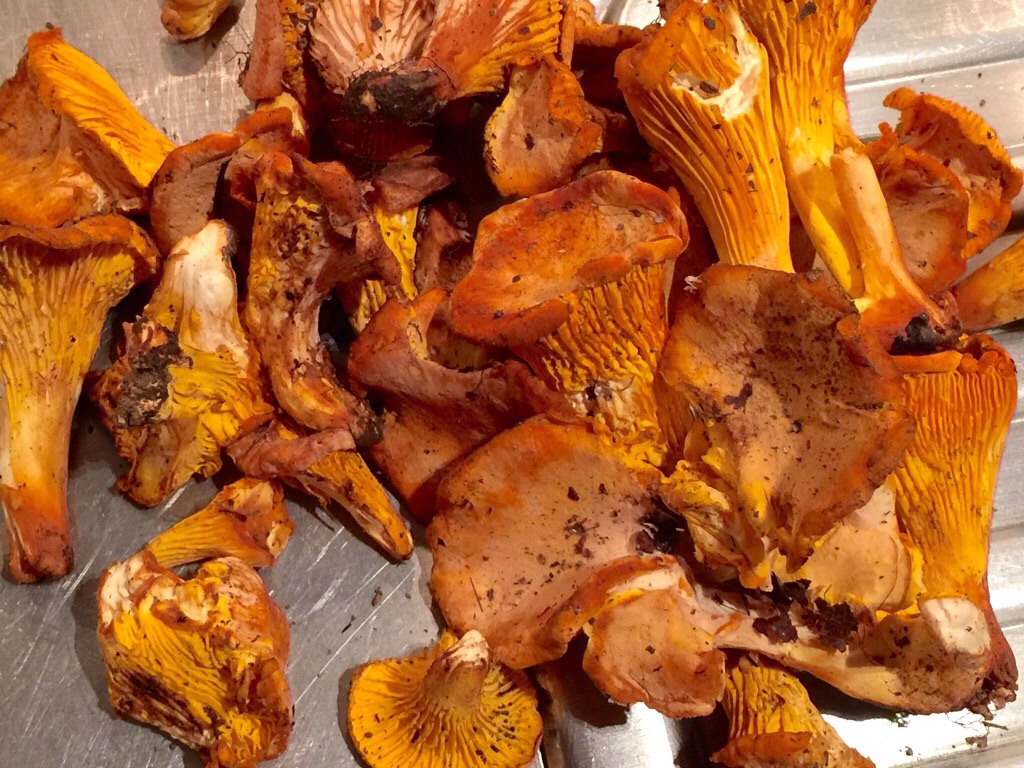 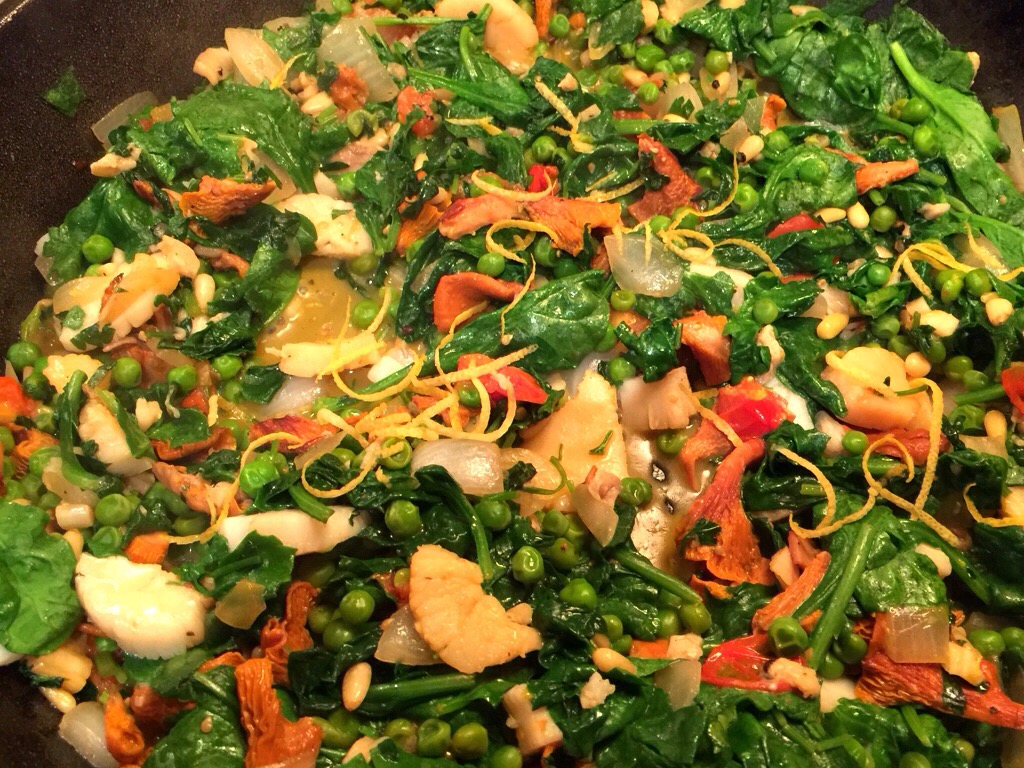 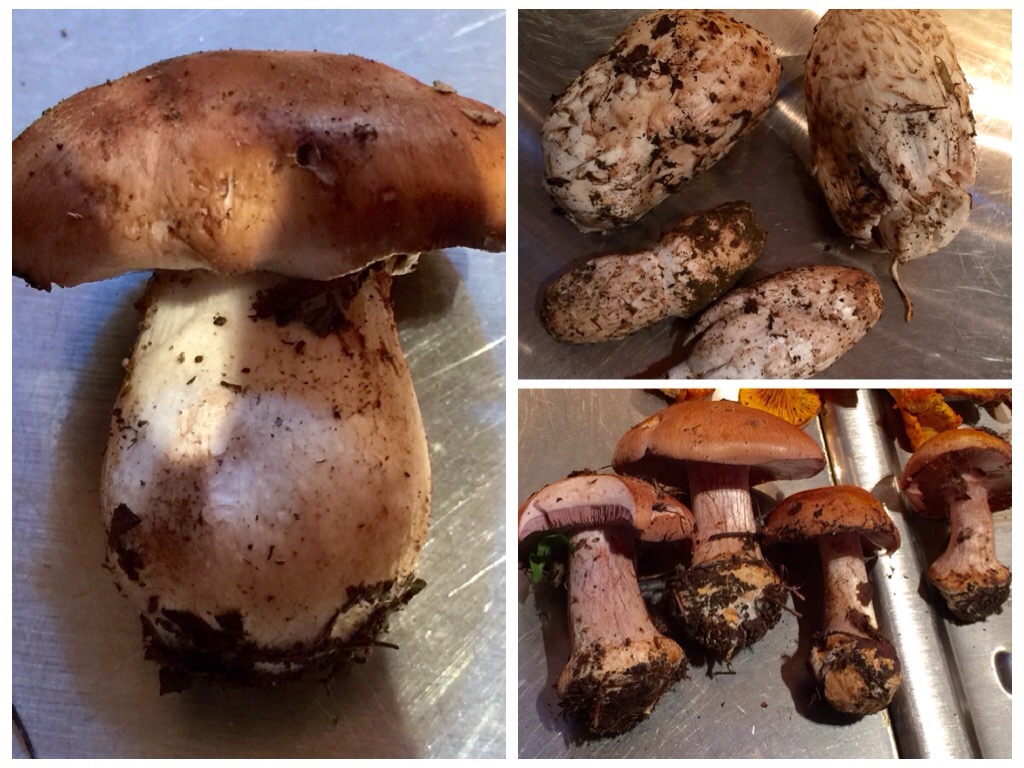 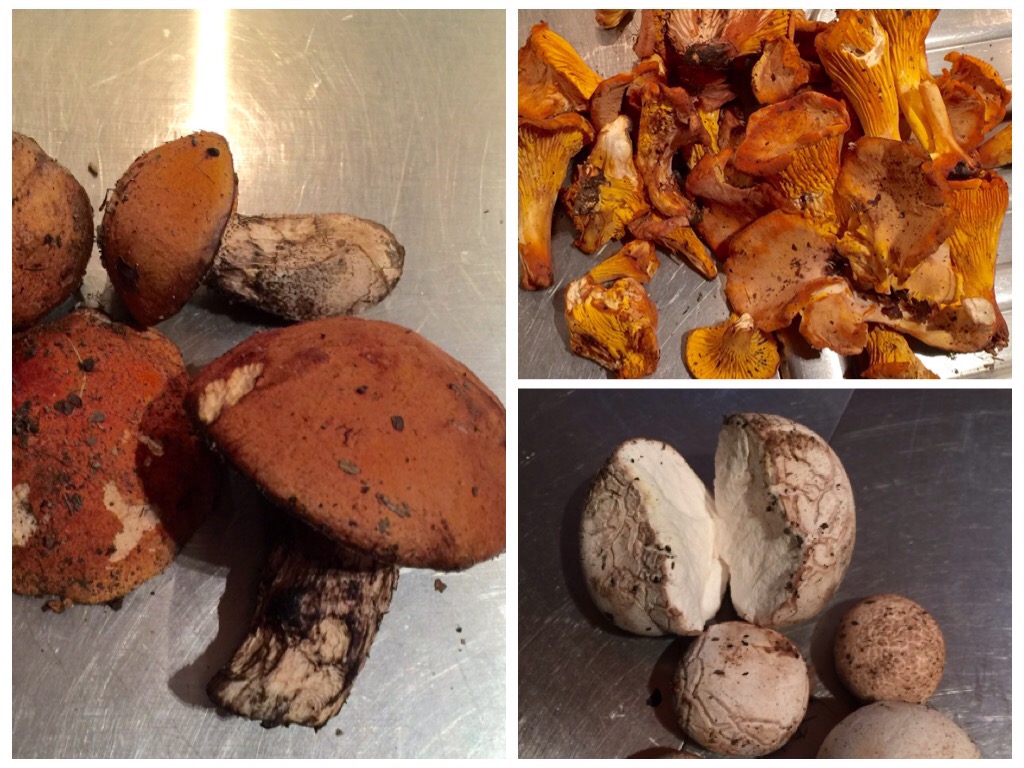 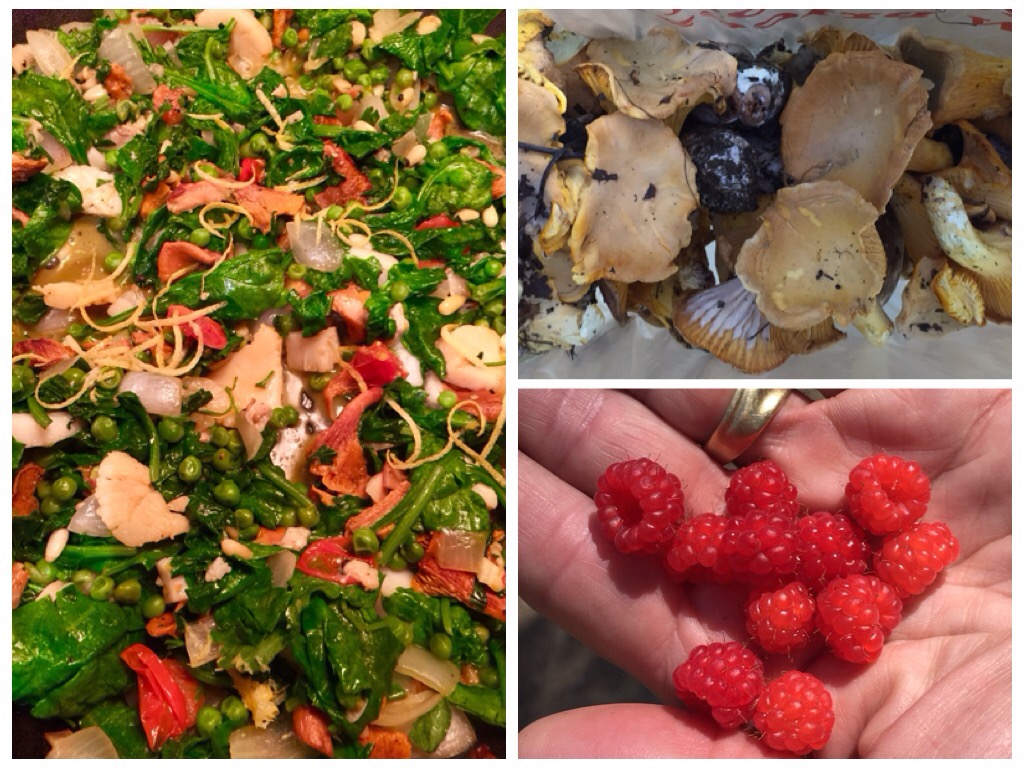 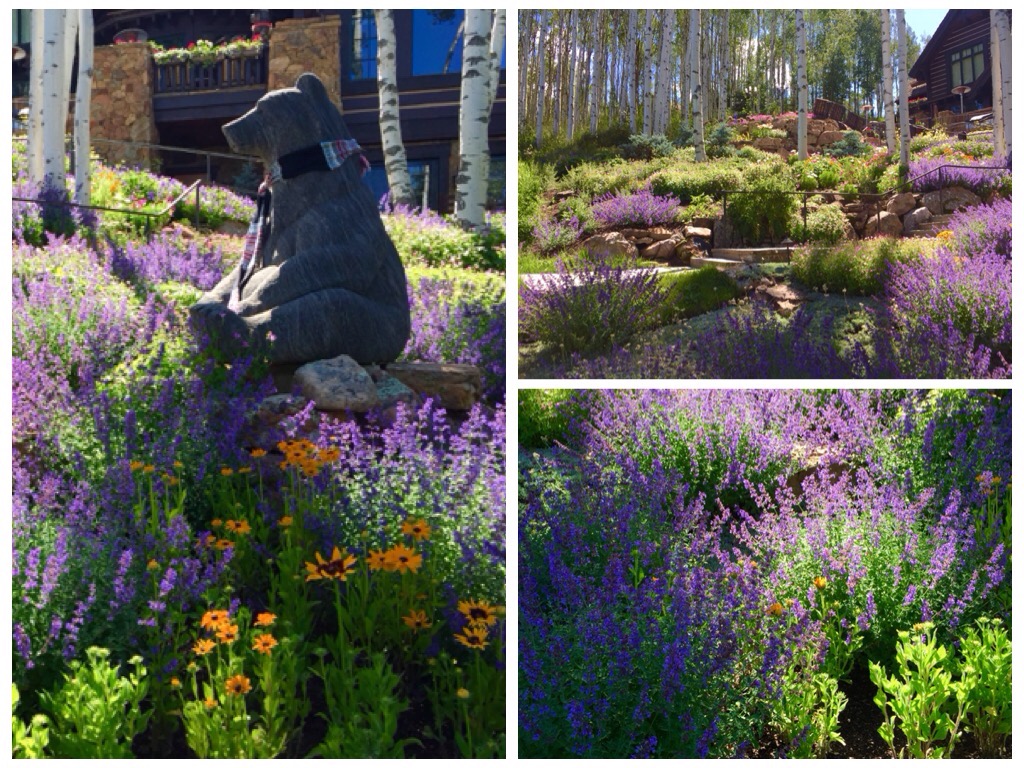 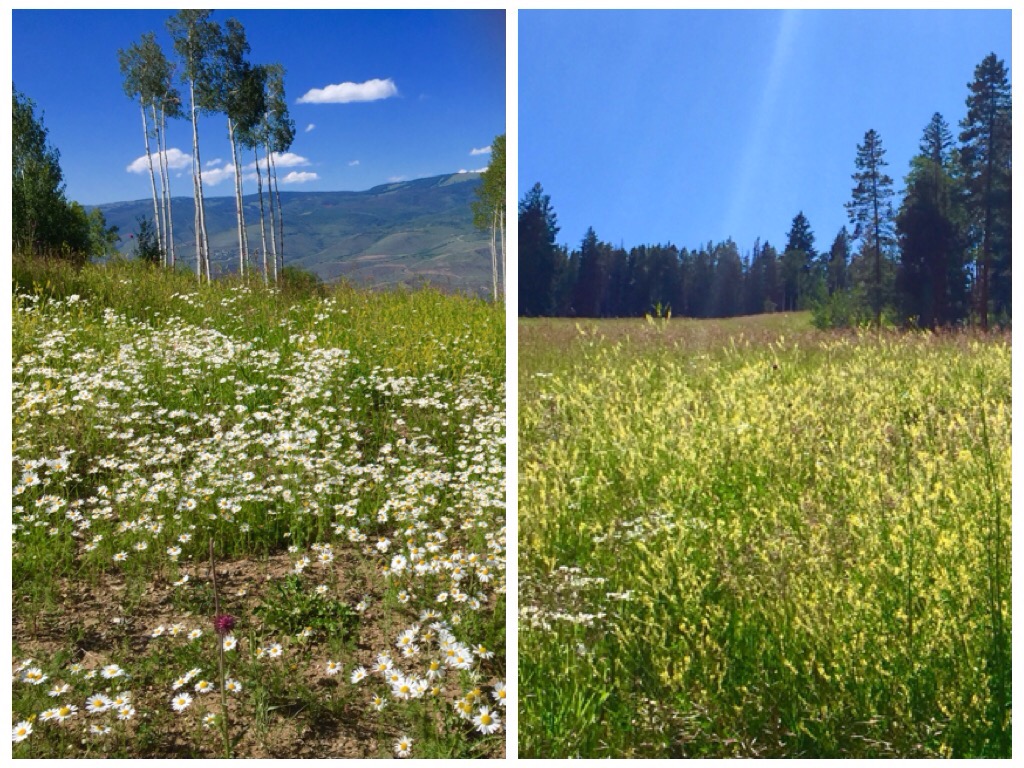 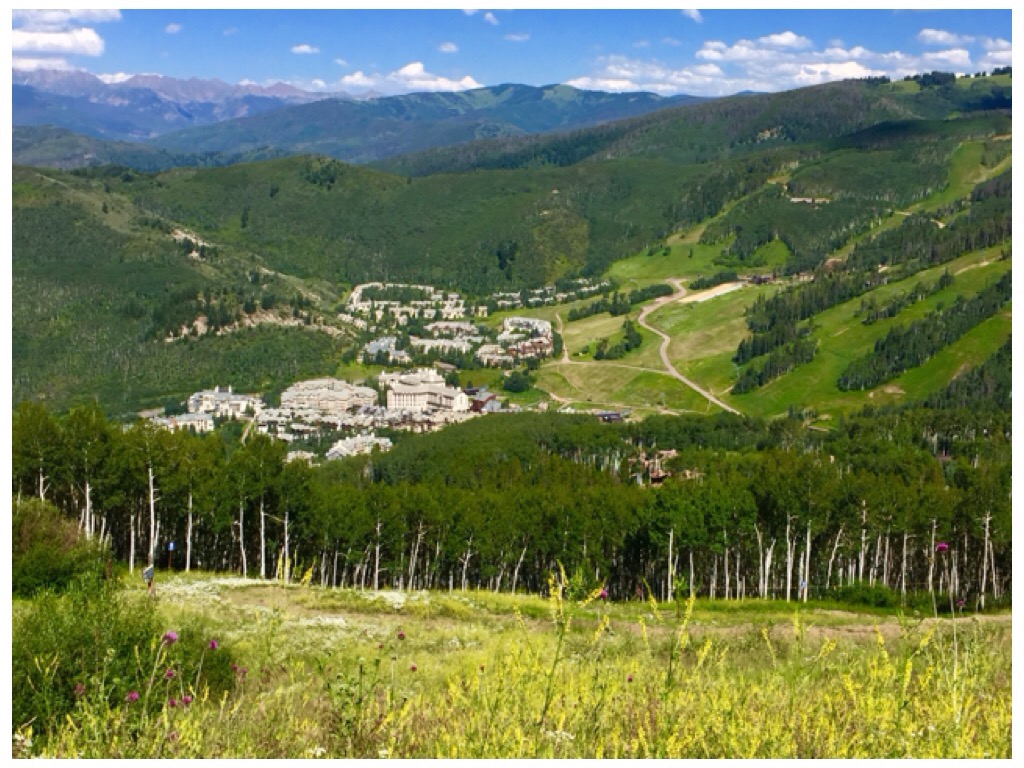 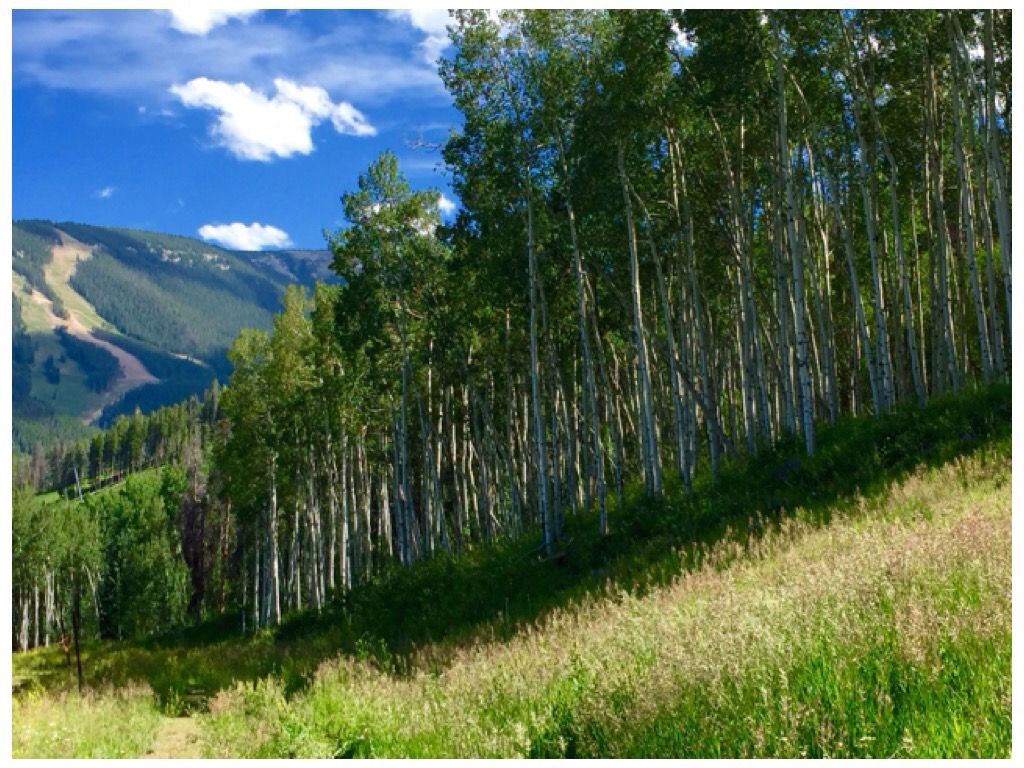 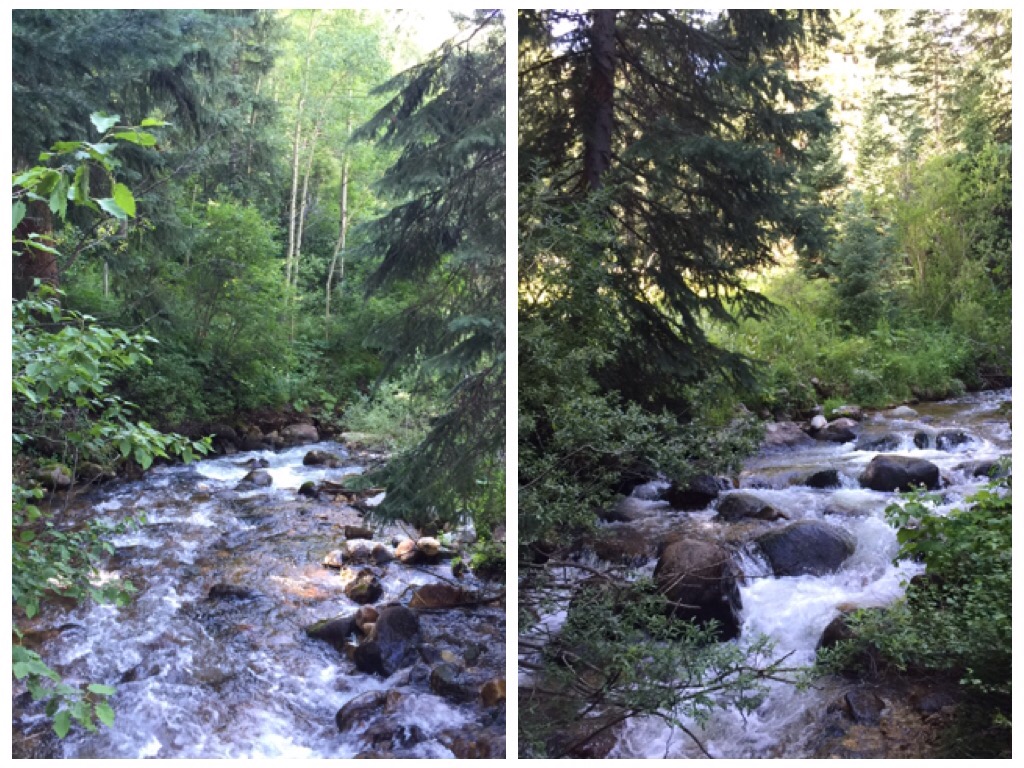 “Do you see a lot of wildlife around your house?,” asked one of the painters who are painting our Colorado home.

“Well… Yes, we do! That is one of the reasons why we like living here… It is so quiet, and we do see lots of wildlife,” I answered.

They grabbed their cell phones and snapped photos of the brown-blond bear that had walked regally and calmly down the hill behind my studio towards us.

The bear had blond colored fur on his back, and was obviously interested in some fruit that the painters had in their bag.

Reluctantly he walked away when we brought the bag, smelling of bananas and tomatoes, closer to us.

In the last week, we hiked twice in the Beaver Creek mountain area.

The narrow hiking path intertwined between pine and aspen forests and vast meadows full of wildflowers and wild raspberries.

During our hikes we collected many fresh wild mushrooms to cook at home.

I recently mentioned to Jules that even though I love mushrooms like organic Shiitake, Matsutake, Chanterelles, Lobster and oyster mushrooms, I rarely buy them nowadays because of their high prices.

Last week, I saw that the price of organic, farm-raised Chanterelles had reached $30 a pound, making them more expensive than any other veg or fruit in the Whole Foods supermarket.

Luckily on our two hikes, we found tasty and fresh Oyster mushrooms, Aspen Bolete, Shitake, beautiful Chanterelles, young Shaggy Mane mushrooms, and the most delicious of all, Matsutake.

It was fun and tasty cooking with the mushrooms that we found. We added wild mushrooms to the dinner dishes that we’ve made this week.

In the studio, I have been busy, with a fresh burst of energy.

An artist must not wait for the gentle touch of inspiration before she enters the studio. She must show up and start working, and she will find that inspiration is all around her and inside her…. We BECOME inspiration, stimulated by the spirit of creativity, if we simply show up to DO the art.

This reminds me of the artist Chuck Close quote: “Inspiration is for amateurs, the rest of us just show up in the studio for work.”

I put the finishing touches on two abstract paintings that I had worked on for the past month, and I completed another painting in the Comics and Superheroes series.

In the new comics and superheroes painting, I used comics that I had bought in a Buddhist monastery in Bagan, Myanmar.

When we went to Myanmar, I had in mind that I wanted to buy comics that depicted masters and monks dressed in robes, telling local spiritual stories about virtues.

For a while, we looked around but found none, but then we visited a temple in Bagan where a mother and her children were selling a collection of exactly such comics.

I used the Burmese comics this week for the background of a painting that I call, “Two Headed Flying Dragon.”

I really enjoy painting this comics series, as it reminds me that life is full of magic and miracles.

The heroes in the paintings represent our inner powers and possibilities, and the dragons symbolize the fear and subconscious patterns that paralyze us.

When I work on this series, I am reminded that the ordinary reality that we THINK we see, the one devoid of magic, is only a reflection of our “grown up” minds, and a perspective of “sober materialism” that we have adopted.

Because we believe that the world is soberly materialistic, we have chased away the magic that is always here. But we can see it again, through the eyes of our inner child…..After all, a world without magic is an extremely dull and an intensely mundane one.

In the East, adults still believe in magic and miracles. You can clearly see it when you travel in Bhutan, Tibet, India, Myanmar, Thailand, Cambodia, and in many islands around the world, that adults have not lost their belief in magic.

I have also added here two photos of the abstract paintings that I finished recently.

They look much more awesome in real life that in the photos, because the top layer of glossy resin on them acts like reflective glass, and I was unable to photograph the paintings well without a more controlled lightning environment.

Besides my time in the studio, I was contacted by a daughter of one of my art collectors.

She told me that years ago, her father had gifted her one of my paintings for her sweet sixteenth birthday, and that the painting has been one of her most cherished possessions on this earth.

She is married now and the mother of a young baby, and she said that recently she moved houses and during the move, the movers had ruined the painting and she was deeply upset.

I offered to restore the painting for her, and this week she shipped it to me and I did just that. It was fun to remember and get a visit from one of my “early children.”

Next week will be a busy week in our house.

Four more painters are scheduled to come and thus a crew of six guys will be working on painting the exterior of our house and studio.

They have been doing a very meticulous job, and we are happy to see that it will get done before we leave to Japan.

← The School Of Love, Understanding Our Sexual Urge
A “Dream-Sleep-Over” at the Aspen Art Museum, and the painting of the Virgin Mary that almost closed down the Brooklyn Museum →