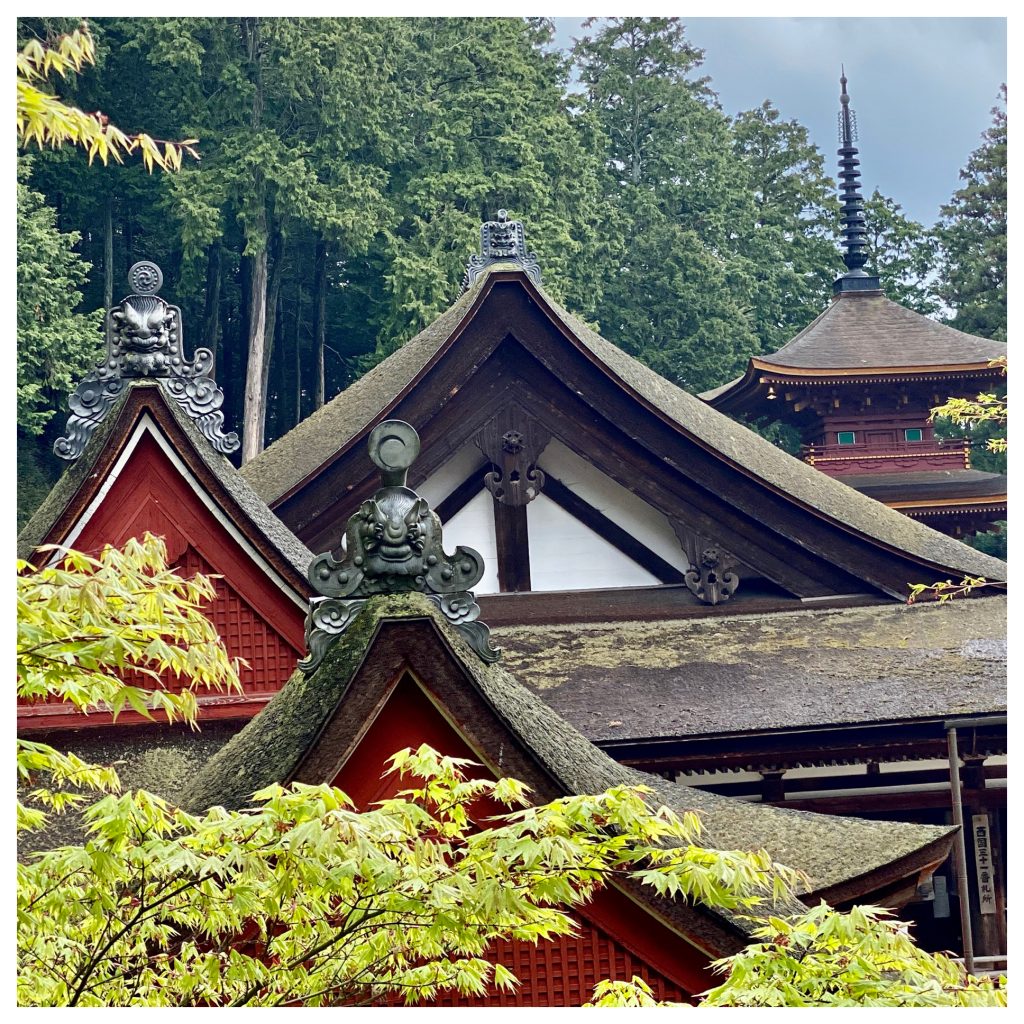 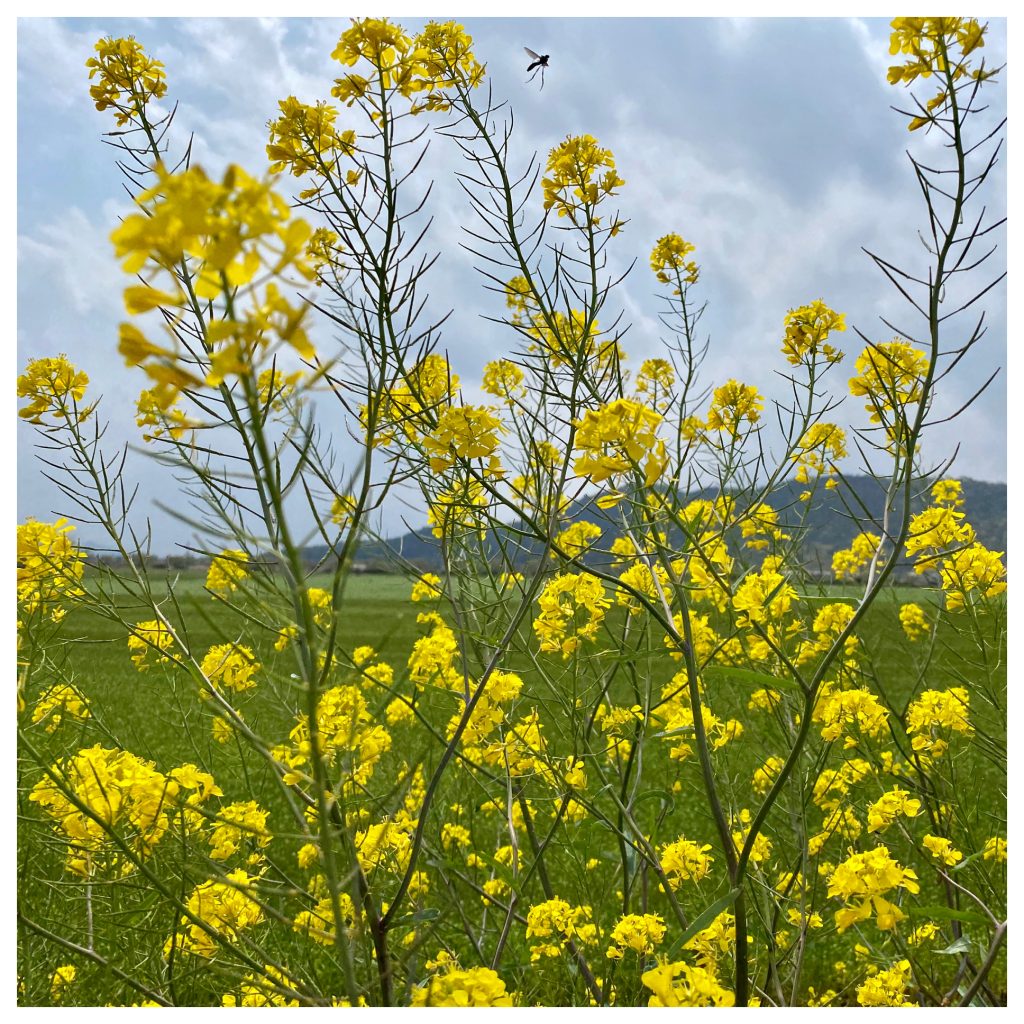 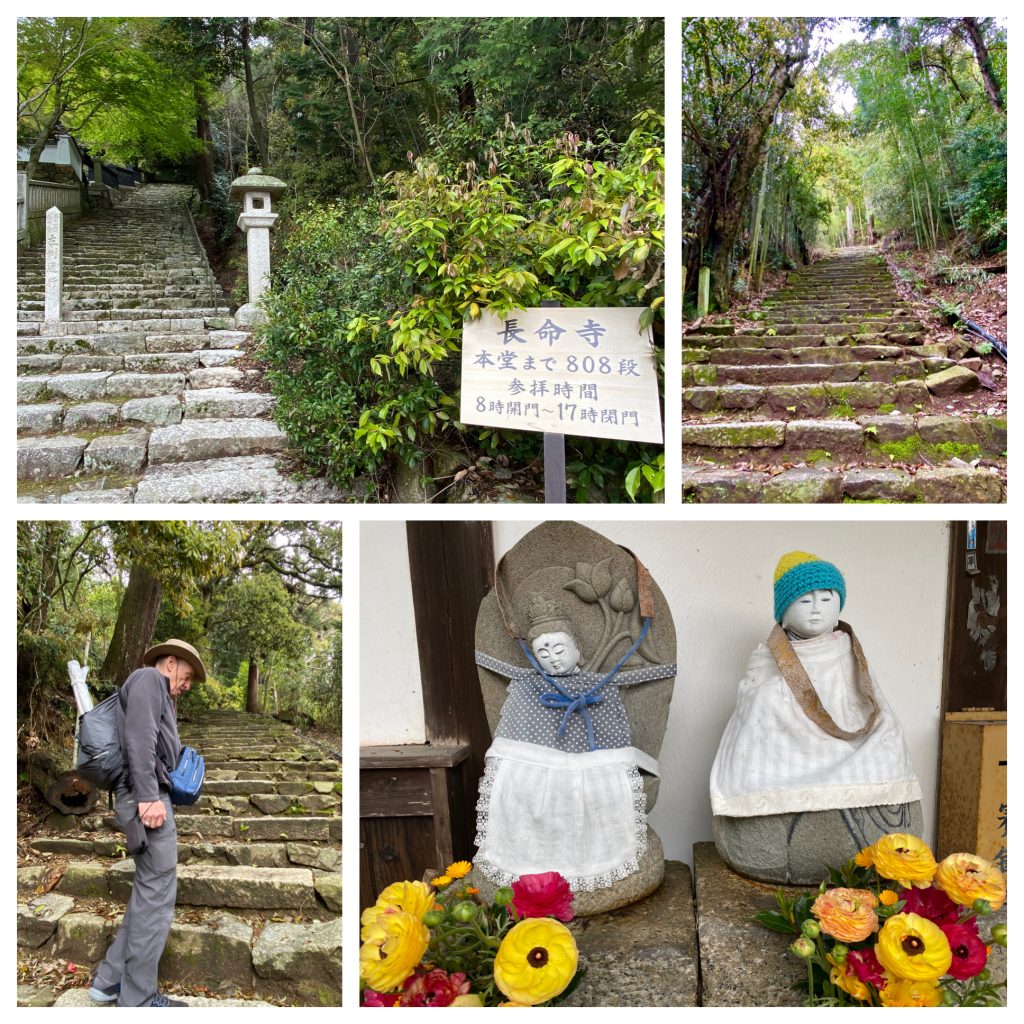 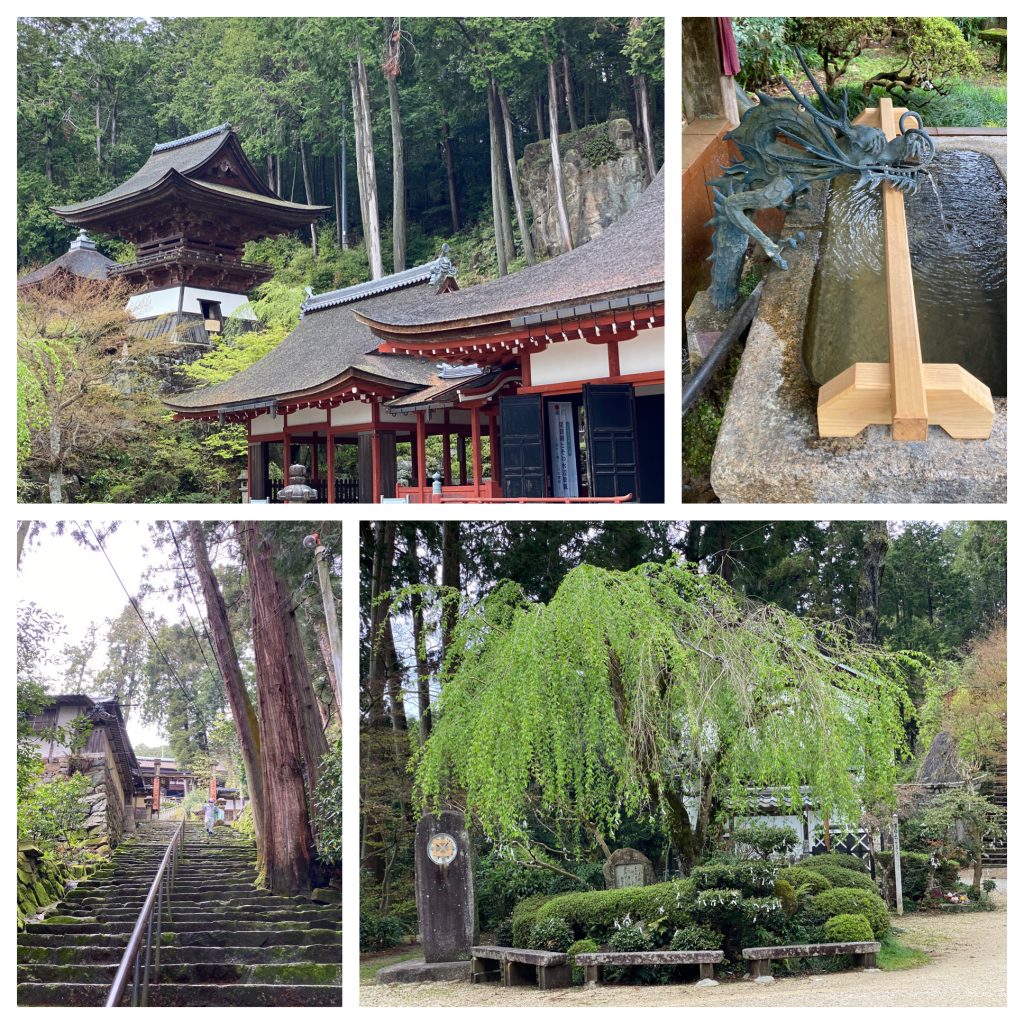 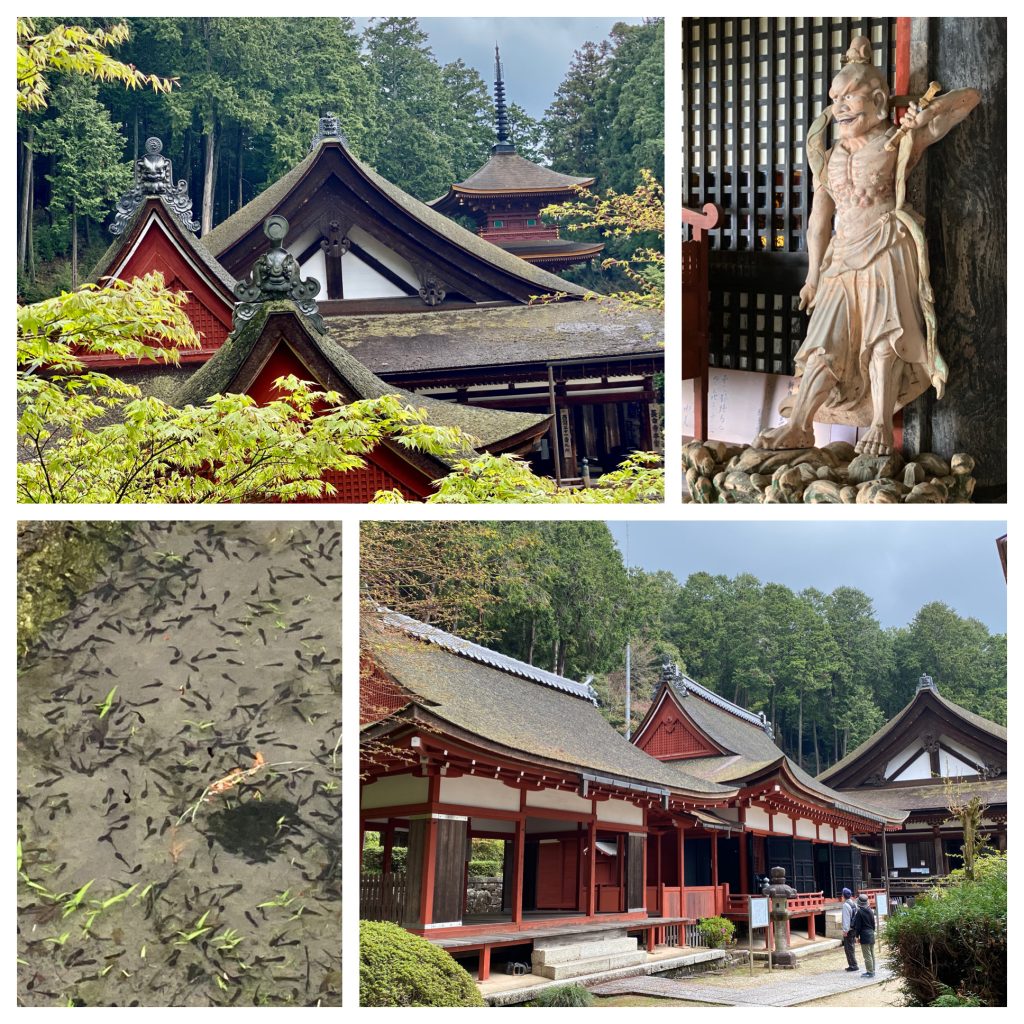 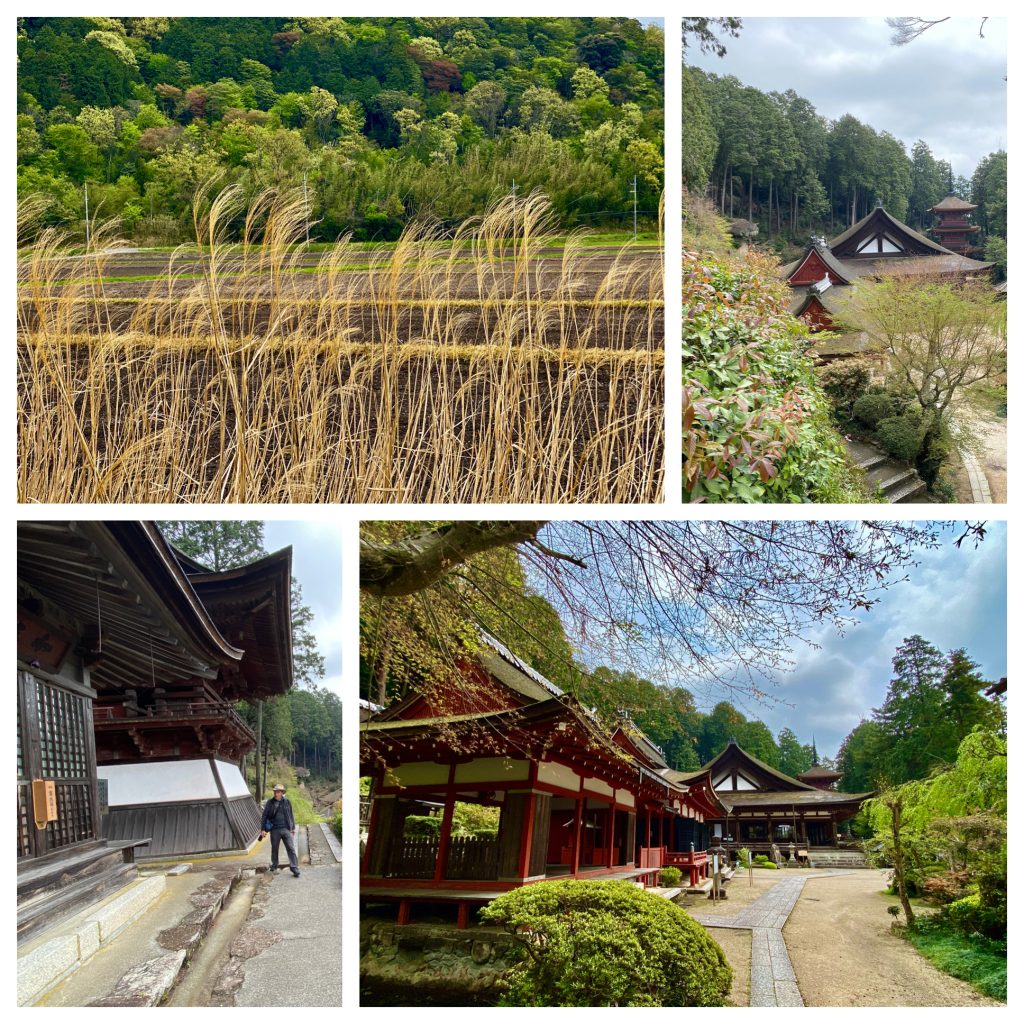 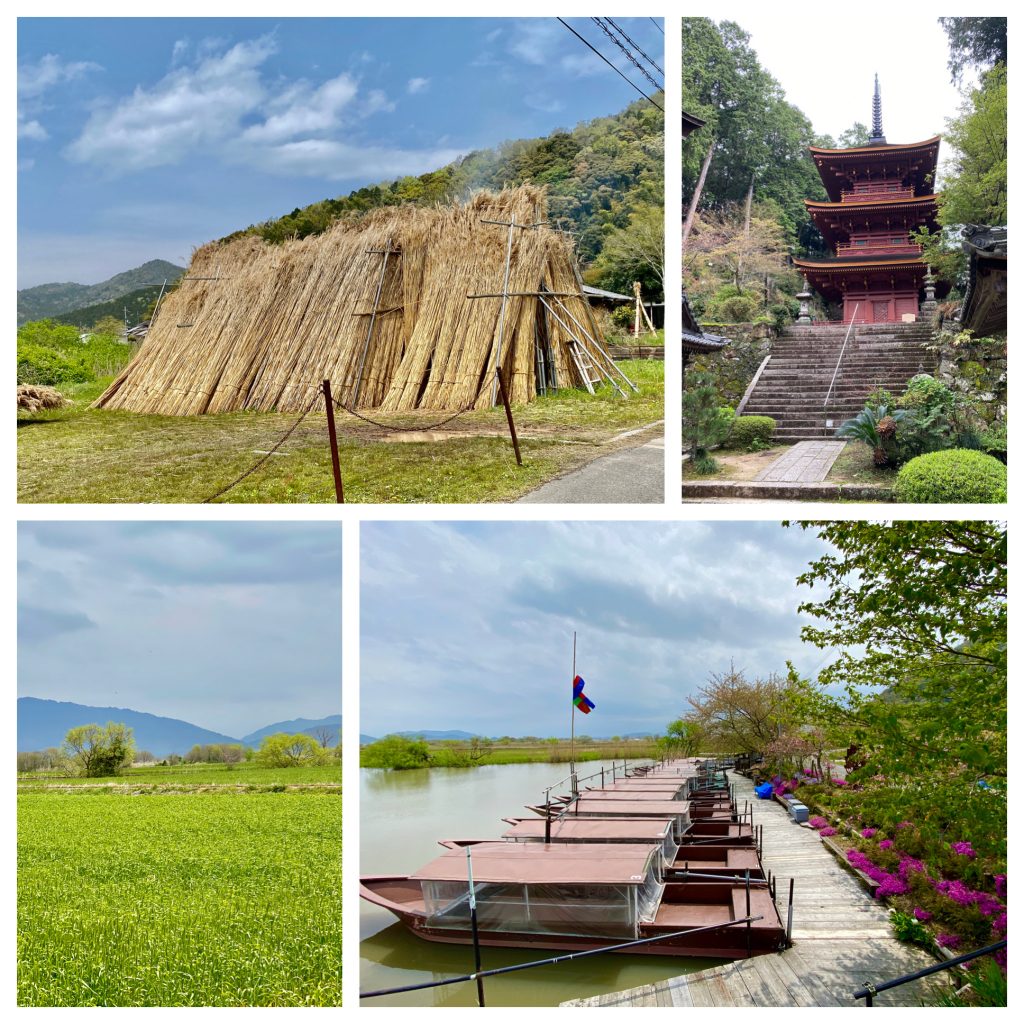 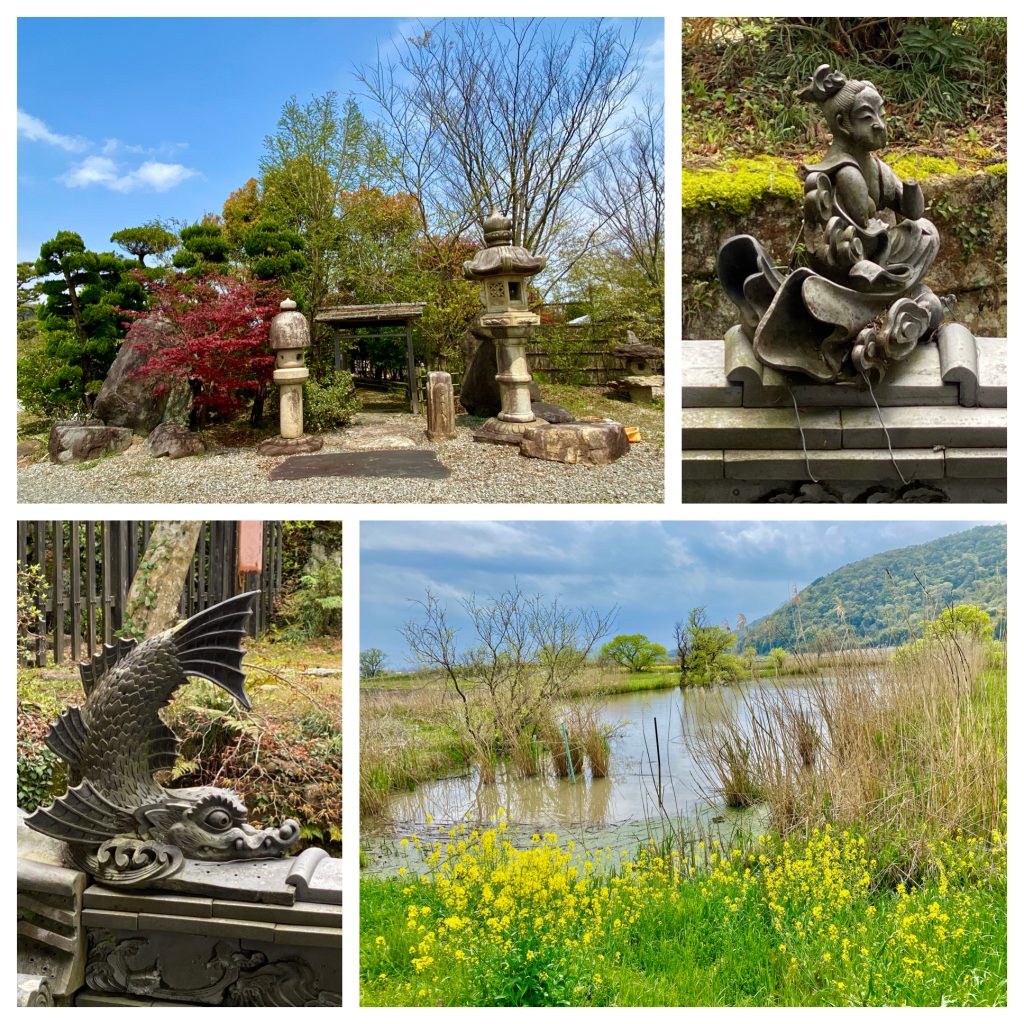 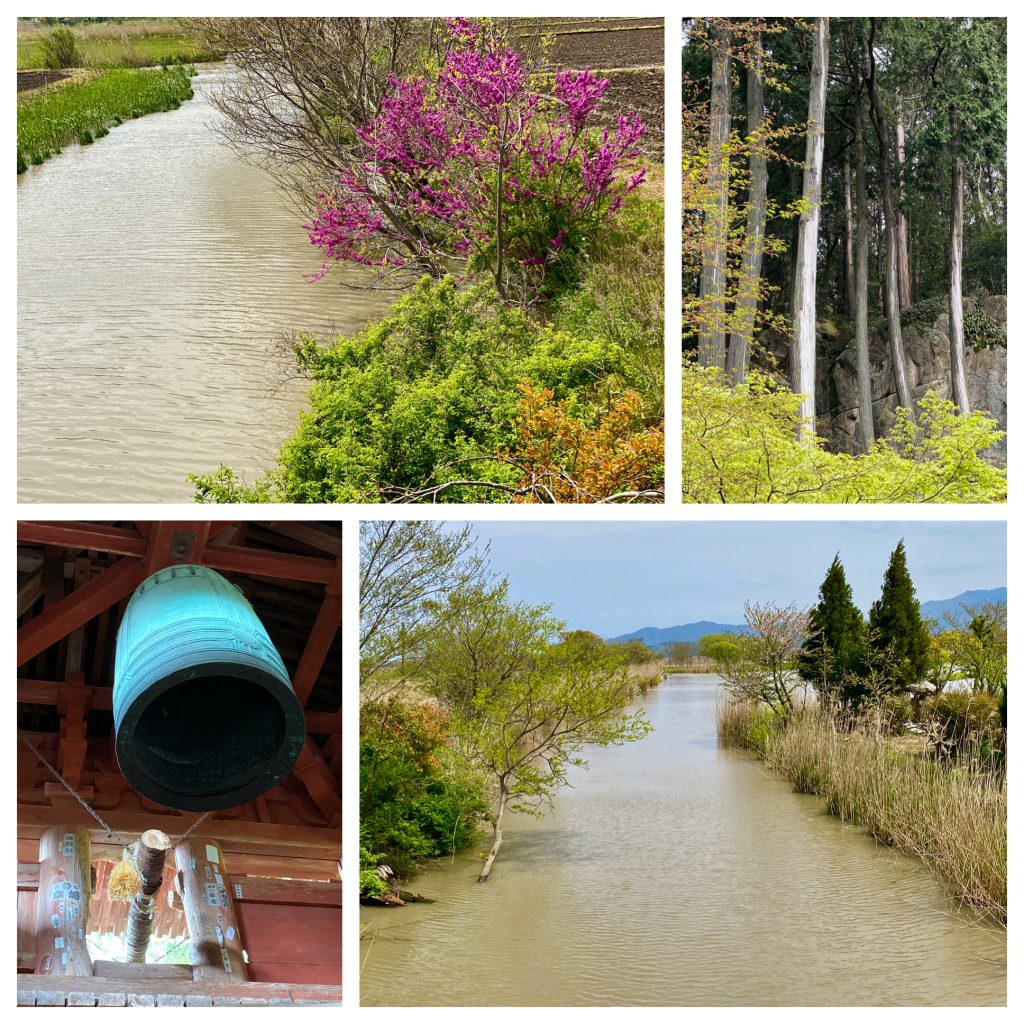 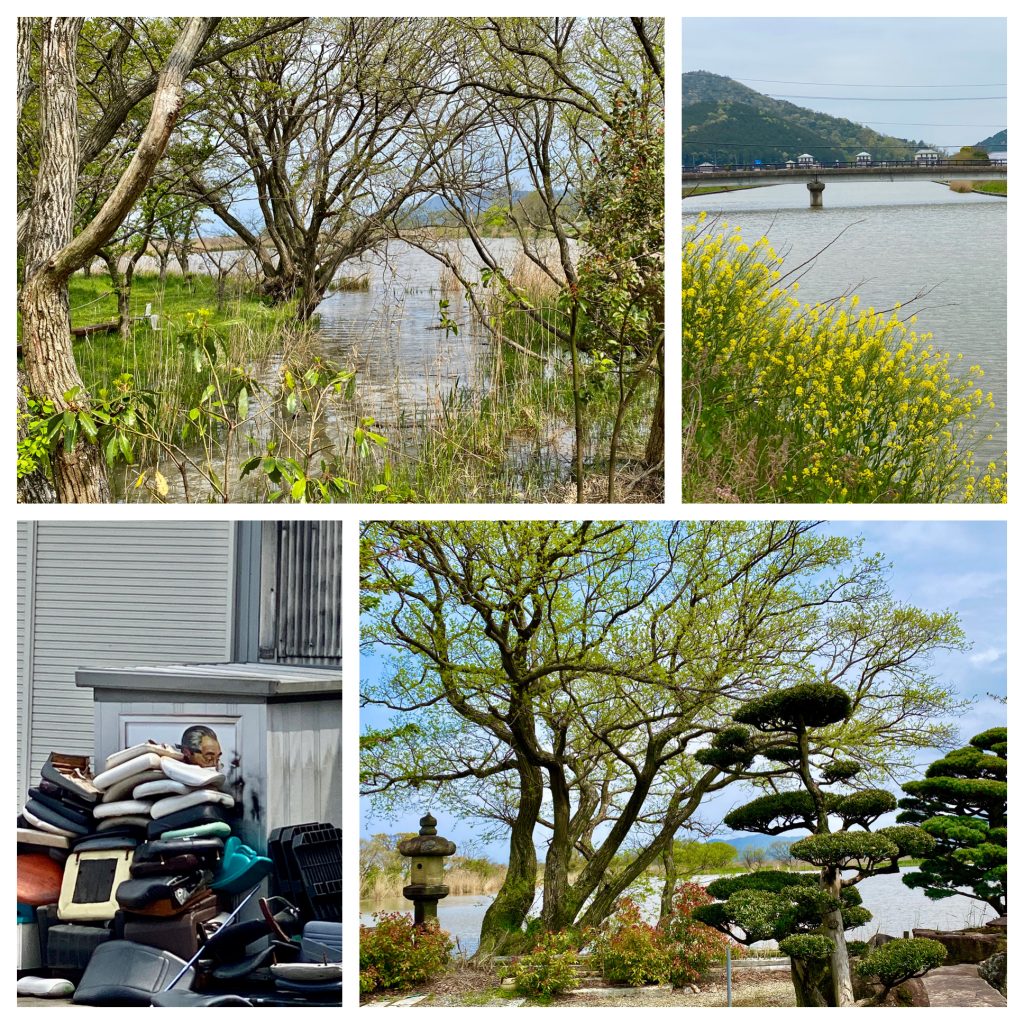 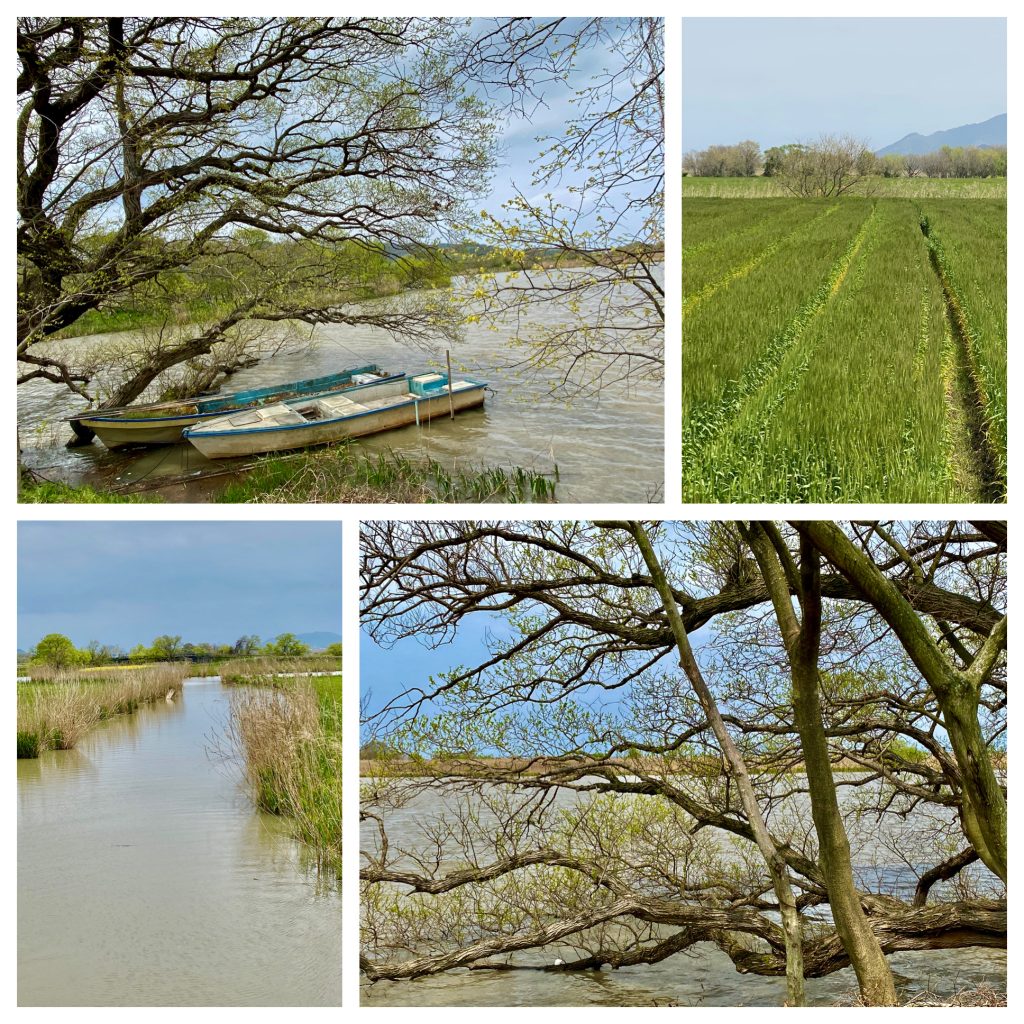 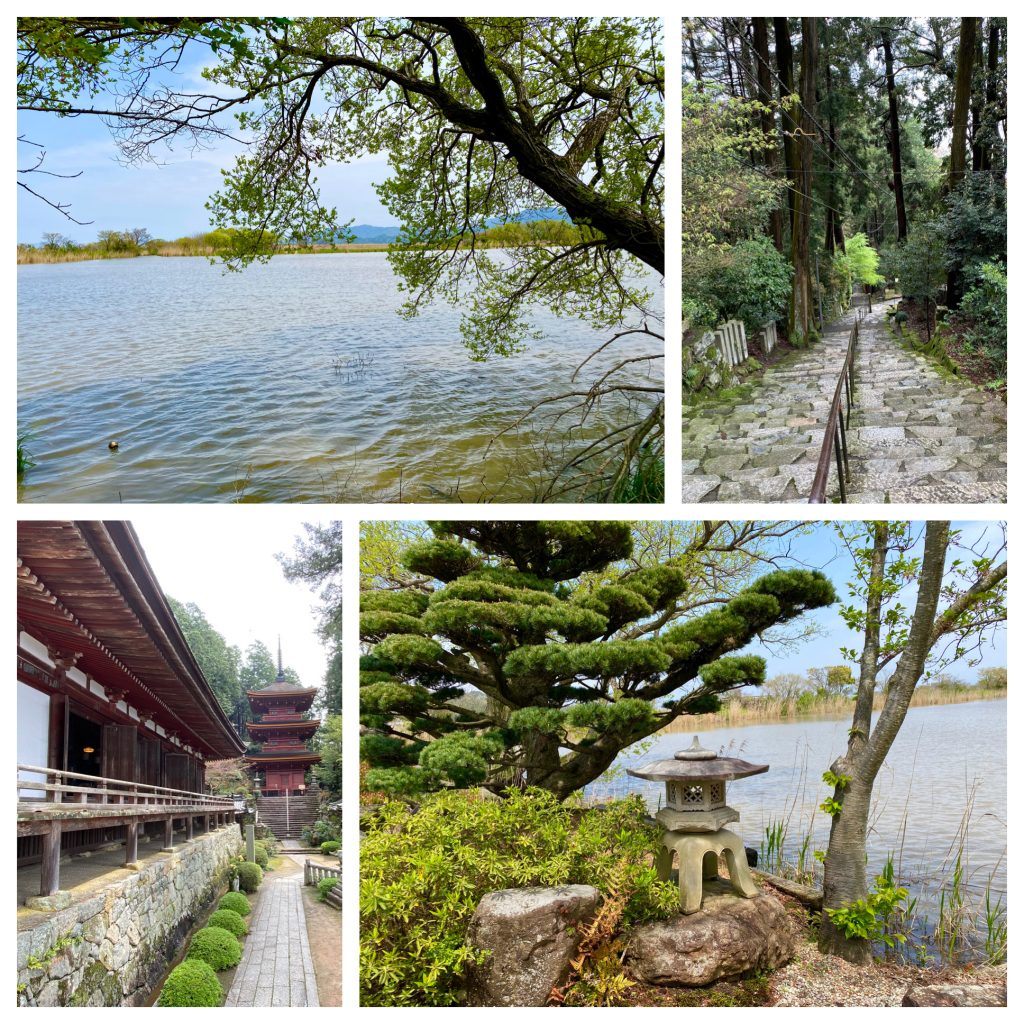 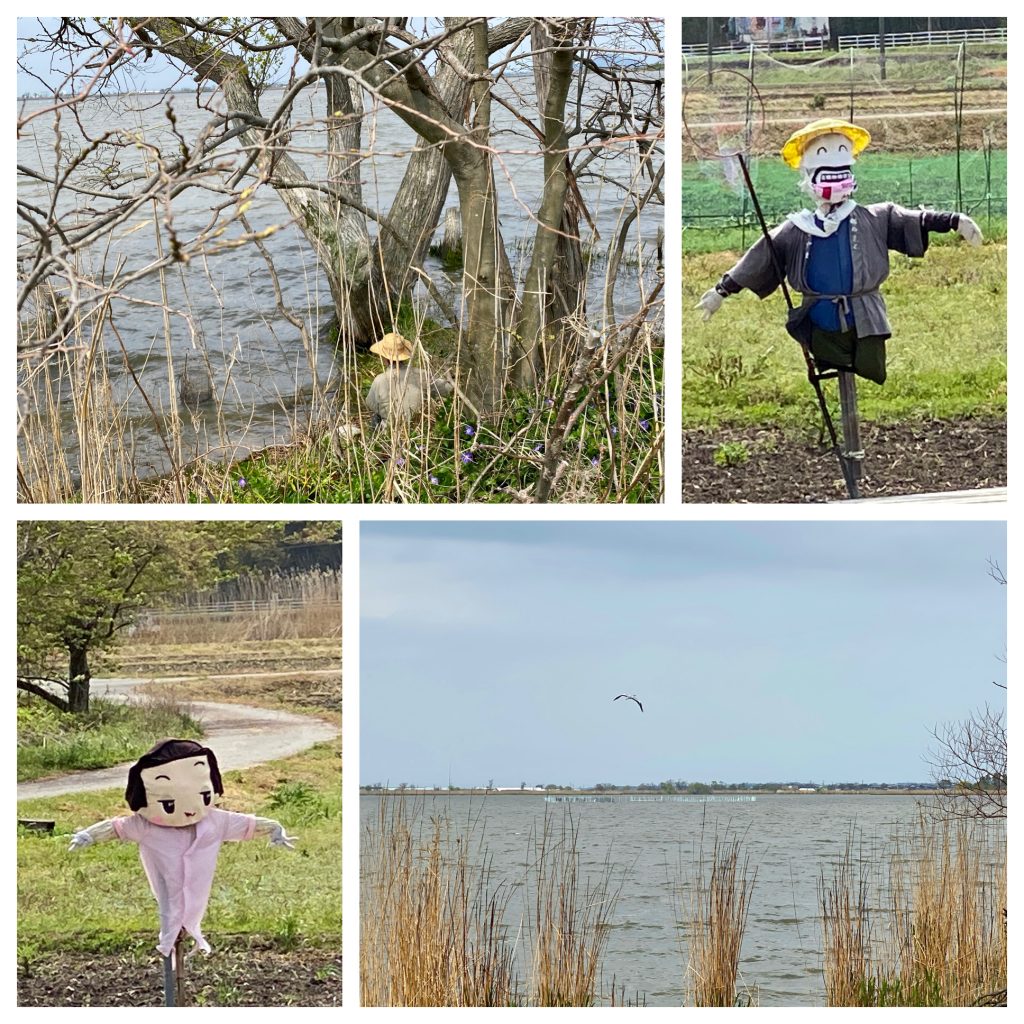 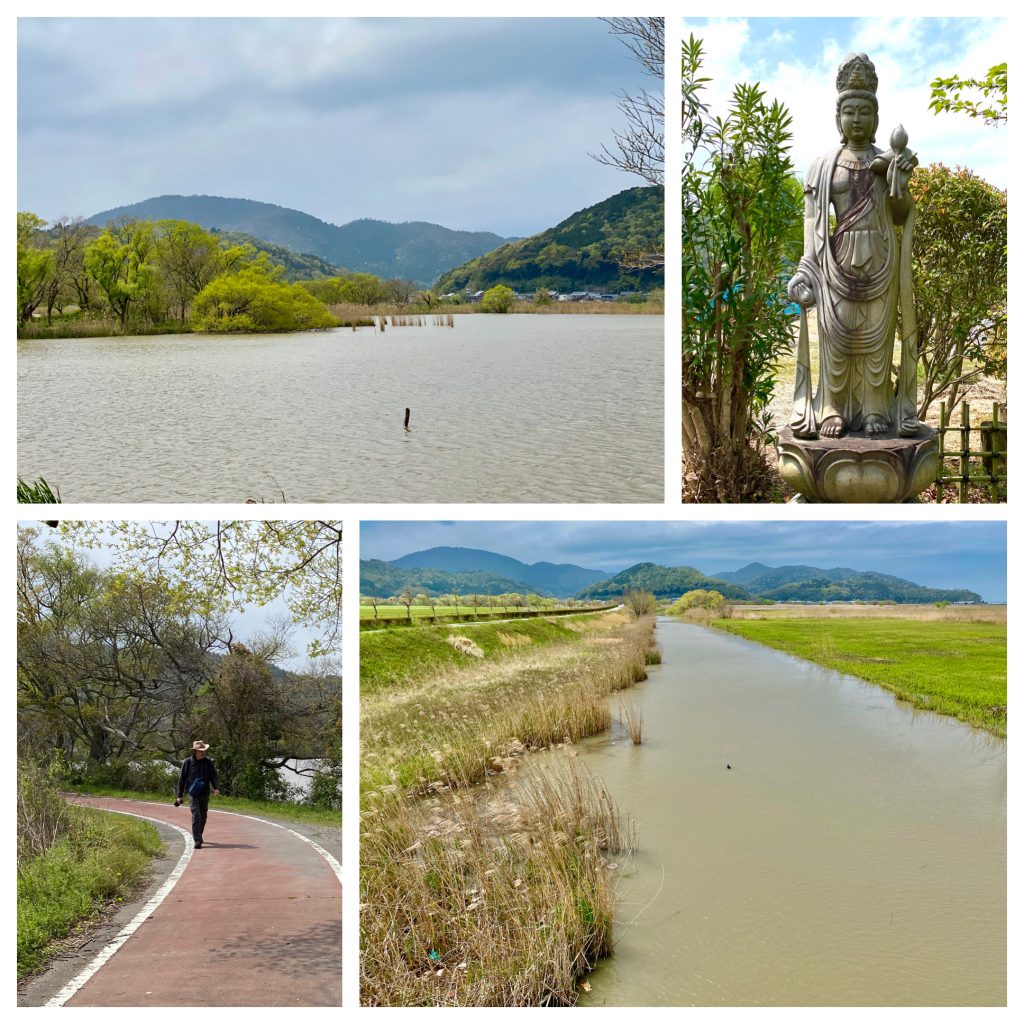 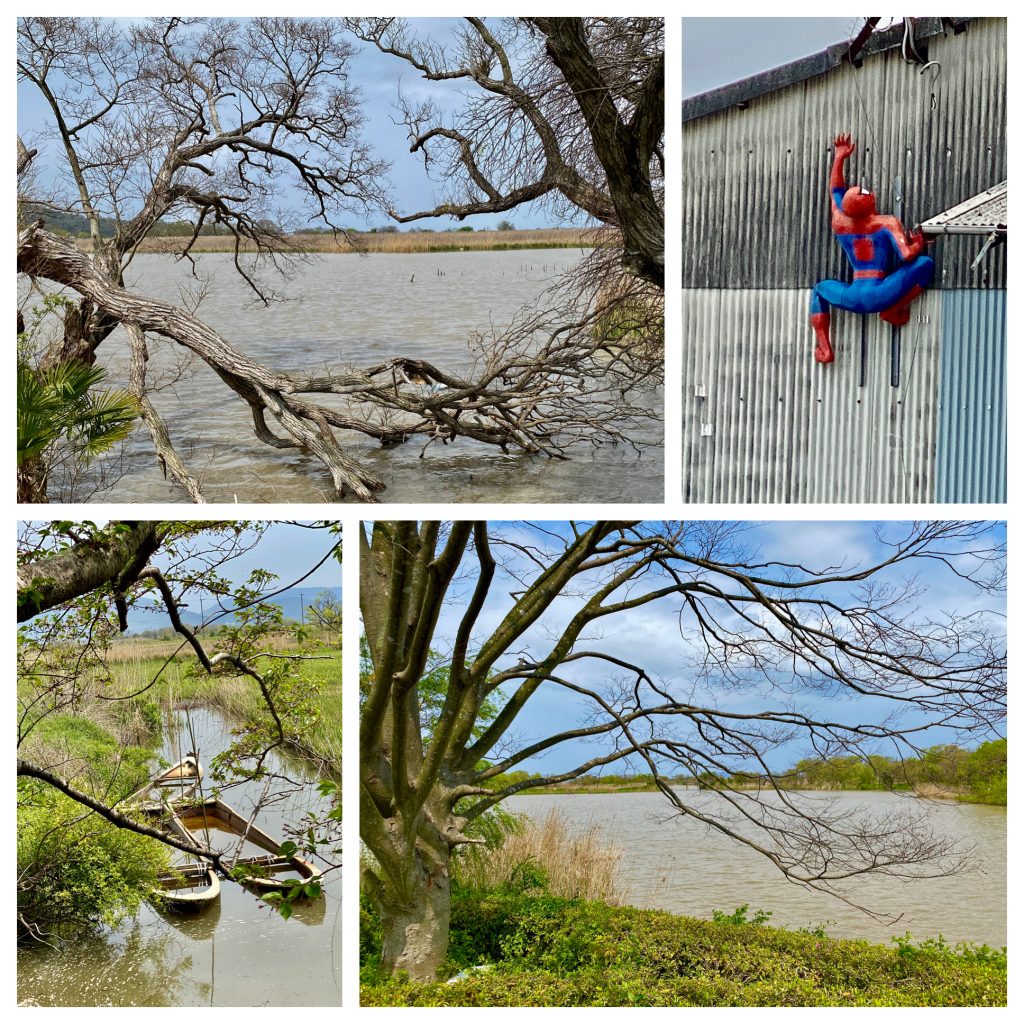 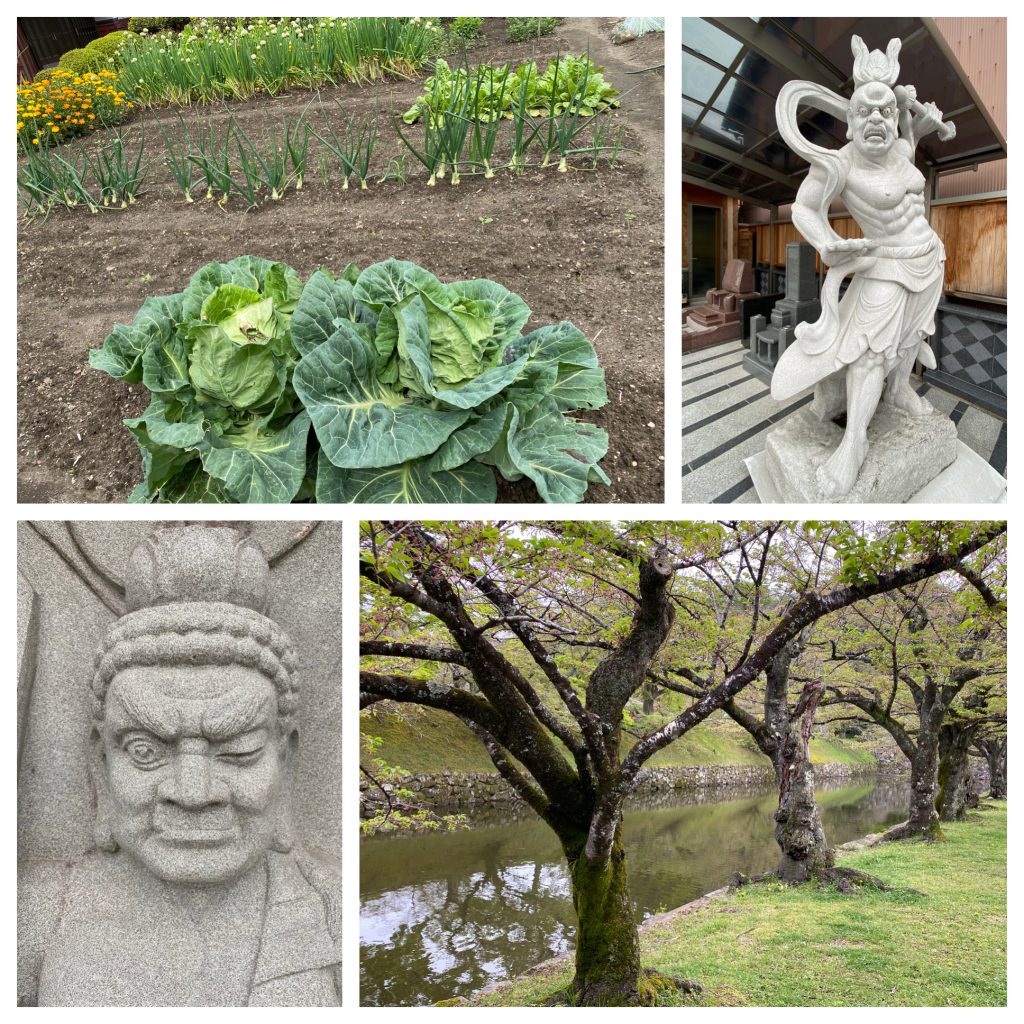 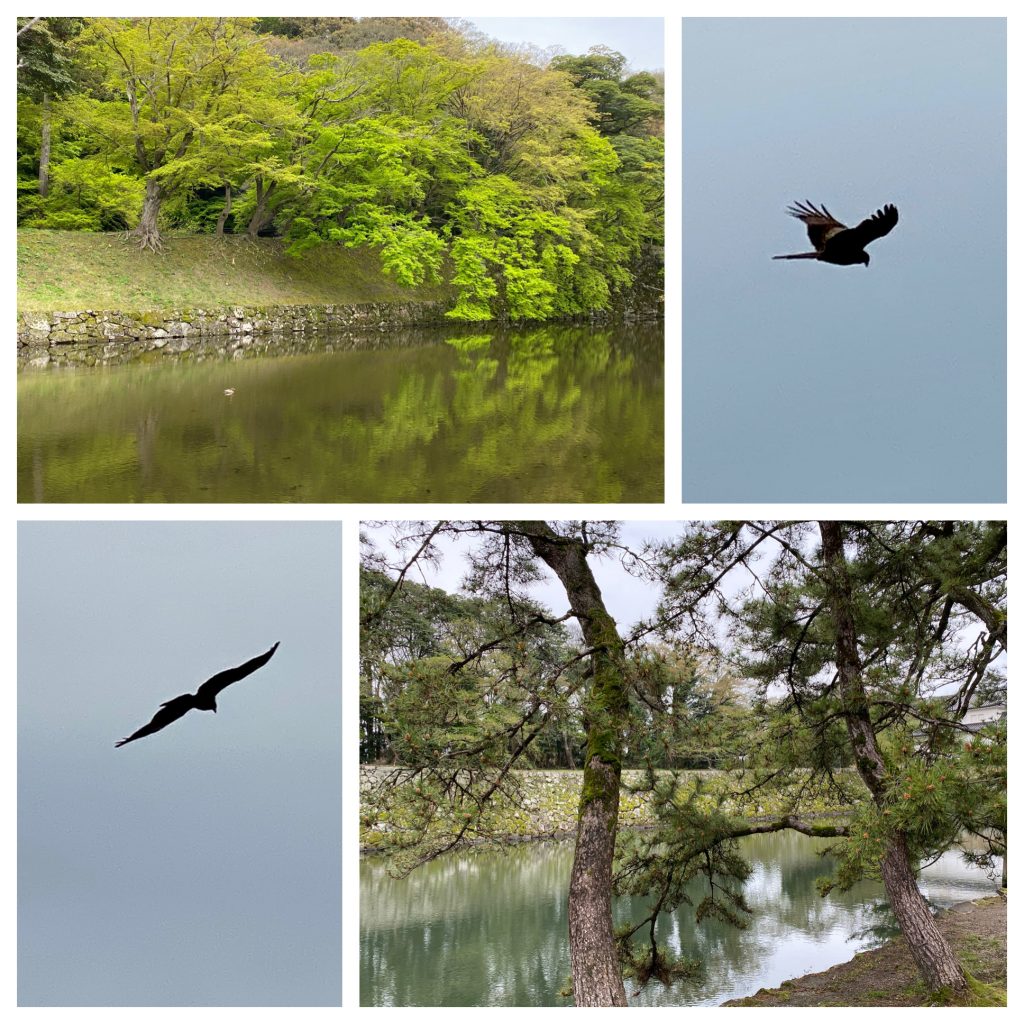 Today we climbed up and down the famous 808 stone steps to Chomei-ji temple.

There is an alternative route to reach the temple, along a mountain road for those coming by car, which takes you close to the temple’s gate, with only about 150 steps to climb.
And of course there is a road that goes even farther, all the way to the temple, that is used only by the temple’s monks and staff.

As Jules said: “The head monks driving their Mercedes Benz cars, the favorite car of all monks everywhere, need an easier access road.”

While his sarcastic remark was not directed at this specific temple, since we had not even reached the temple, he was making an observation based on our visits to other temples.
It is true that some head monks in Japan who can afford it, own new Mercedes Benz cars.

The life of the ascetic monks, roaming the forests in search of enlightenment, is practiced by very, very few, if any.
After their rigorous Zen training, they go on to live relatively comfortable lives of performing puja rituals, giving blessings to newborns and weddings, performing death rites, and organizing annual temple celebrations.

Not every head monk drives a new Mercedes, but some who run big and prosperous urban temples do.
It is not their expensive choice of car that is the contradiction here.
It is their belief that comforts and possessions are to be prioritized that goes against the teachings of their predecessors, who established these temples 1300 years ago.

In the past, monks sought spiritual powers known as Siddhis.
Siddhis are supernatural powers or abilities, and attainments that are the products of spiritual advancement.

Having an impressive house and a luxury car is all very nice and fun, but it does not compare to being able to manifest everything you need out of the unseen.
Being able to transcend the physical laws, walk through fire, walk on water, and being able to merge with the Absolute knowledge of the past, presence and future, are just a few Siddhis powers that can be developed.

It reminds me of the observation of the Zen master Kodo.
He said:
“Once, learning and education was about trying to understand the deeper meaning of life.
Nowadays it is all about securing a better paying job.”

Chomei-ji temple is a real mountain temple.
After our climb up the 808 slippery wet steps, we reached the mountaintop. (No luxury cars here.)
It is said that the climb up through the grove of bamboo, is especially beautiful on windy days, when the bamboo stalks rattle and tap, almost like a pilgrim’s walking pole striking the steps.

The temple has a few buildings, all with thatched roofs and beautifully designed.
The pagoda and bell tower stretch high into the forest.
The forest above them is full of beautiful trees, and it is possible to hike right from the temple into the forest trails of Mount Ikiya.

We were delighted to see that the temple was open and that we could get our book and scroll stamped.
From the top deck, there are sweeping views of Lake Biwa and the valley below.

Due to the coronavirus, we were not allowed to enter the inner shrine, to see the eleven faced Kannon statue created in the 12th century.
But we prayed and chanted at the main hall.

The name Chomei-ji, translates to “A long life temple.” According to legend, Takenouchi no Sukune, an ancient Japanese statesman, prayed at Chomei-ji for a long life.

He carved the following passage into a large willow tree.
[寿命長遠所願成就] ” I wish to live a long life!”

Miraculously, his wish really came true and allegedly he lived to be 300 years old.

Centuries later, the prominent Prince Shotoku Taishi (592-710), found the tree.
Even though several hundred years had passed, Sukune’s inscriptions were still clearly ingrained in the tree.
Since Sukune was a very famous man for living 300 years, Prince Shotoku was quite impressed with his discovery.

Just then, an old man appeared and instructed the prince to carve the tree into a Kannon statue.
Prince Shotoku followed the man’s instructions and enshrined his statue in the little temple, naming it “Chomeiji” meaning, “The temple of long life”.

Today, people come here to pray for a long life, just as Takenouchi no Sukune did.
The main hall was rebuilt in 1524.

When we left Chomeiji, we held hands to make sure not to slip on our way down the wet stone steps.
When we reached the bottom, we took a short break in a park by the lake, to have some tea and plan our walking route towards Kannonshoji, temple #32.

I chose to walk by the many canals running from Lake Biwa.
These canals have been used to irritate the rice fields in the area for hundreds of years.
It was a very scenic walk.
Now that the government has requested that people stay indoors, it feels a bit sad to walk by so many closed businesses.
But walking along the canals was beautiful and felt like a nature walk.

We saw people fishing, families with young kids walking, and a few people cycling, running or walking on a path along lake Sainoko, a smaller tributary lake of Lake Biwa.

People planted flowers along some of the canals, and we saw tourists wooden rowboats that are like gondolas, used for a leisurely trip along the canals.
There were tall reeds, big turtles, ducks, cranes and floating rice fields.

We stopped by a park to enjoy another tea break and eat the lunch that we had brought with us.
At the end of our walk, we decided to take the train to the town of Hikone, to check on the ferry operation that is the only way to reach Temple #30, which we will visit from Hikone.

We were not sure if they were running the ferry and if it would be possible for us to visit the temple, located on a small island in the middle of Biwa Lake.

Hikone was like a ghost town.
A shoe store and a few other businesses were open, but almost no one walked on the streets.
We met a friendly woman who told us that she was studying English and asked if it were not terribly hard to travel right now in Japan.

The ferry terminal was closed, but a sign on the door said that the ferry is running once per day, at 9:30 in the morning.
We had a glimmer of hope that maybe we would be able to visit the temple after all.

Back in our hotel, we had a lovely Italian dinner in the hotel’s restaurant.
They were other guests around, some even acknowledging our presence with a greeting and a smile.

We felt happy that we have been staying in a comfortable hotel with an Onsen hot springs and a restaurant, and that we did not have to scour the empty streets of the city, looking for an open place where we could eat dinner.

The Starbucks cafes in Japan have now packed away all their furniture, and are doing only takeaway service.

With warm blessings and best wishes,
Tali and Jules