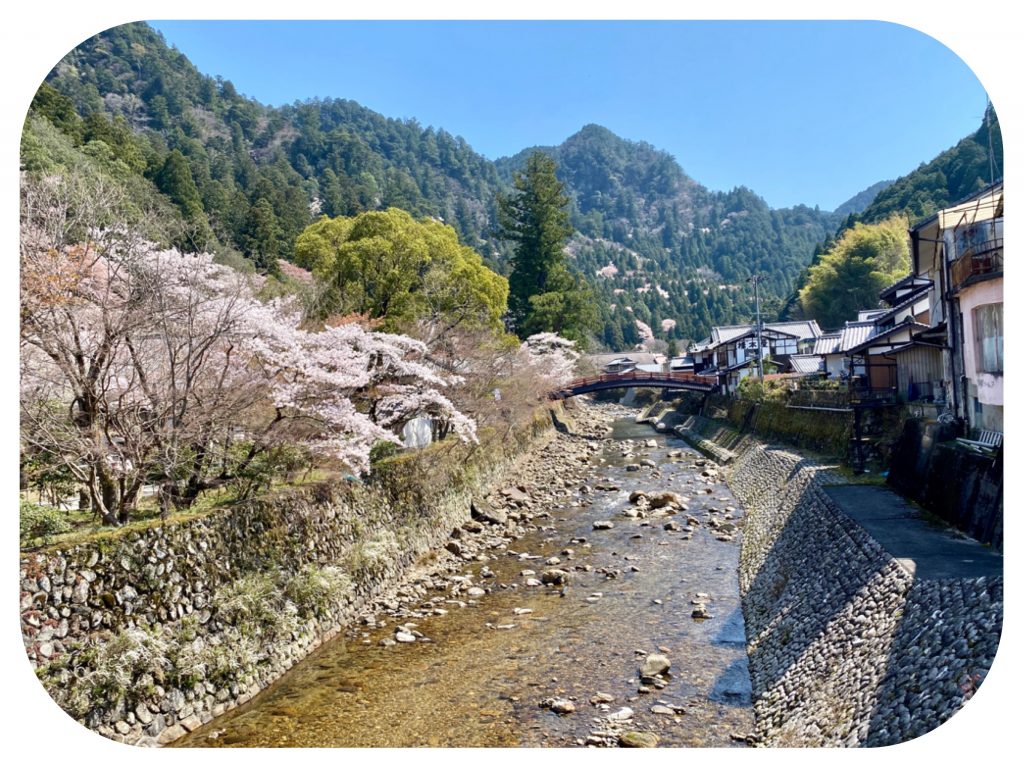 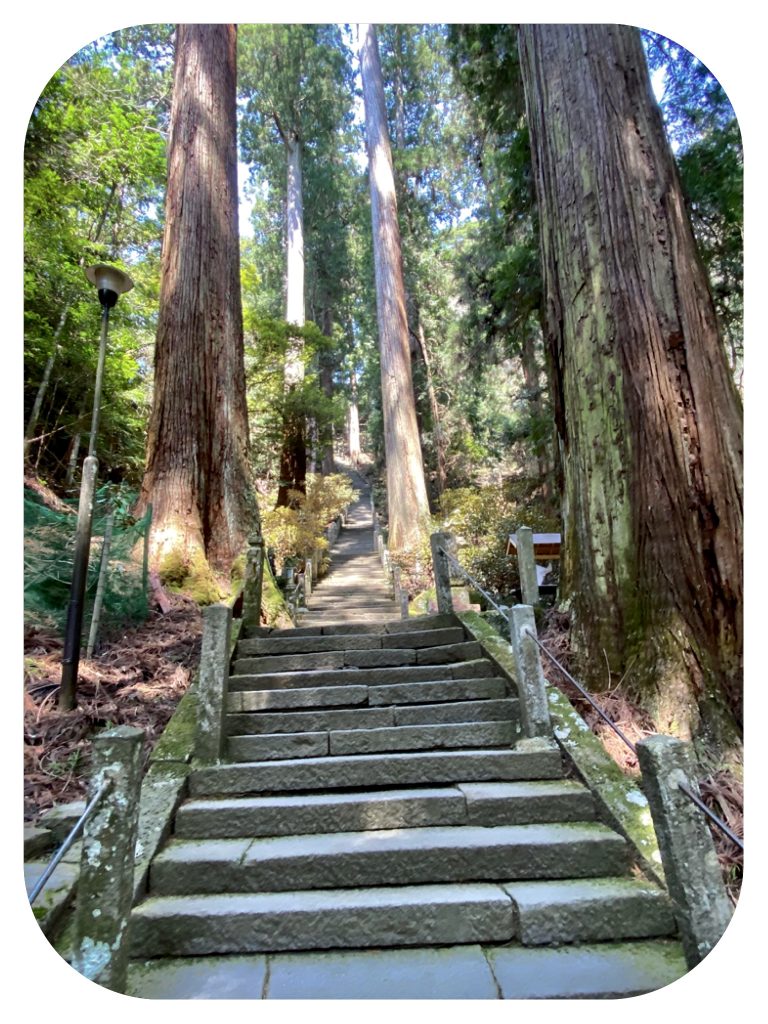 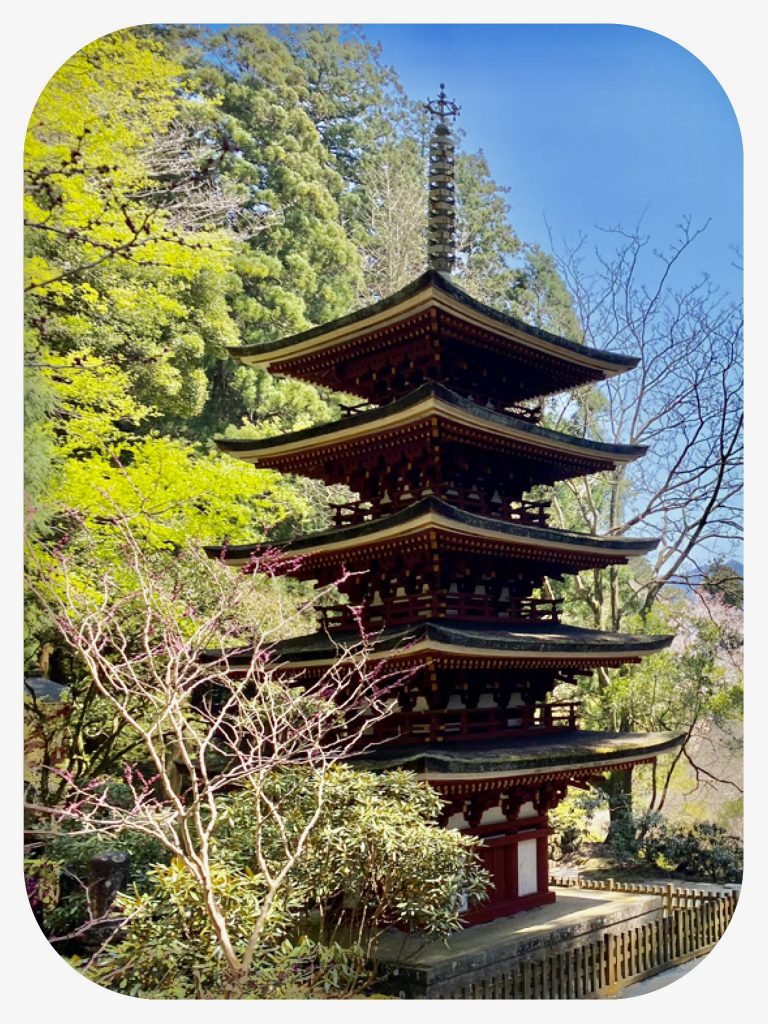 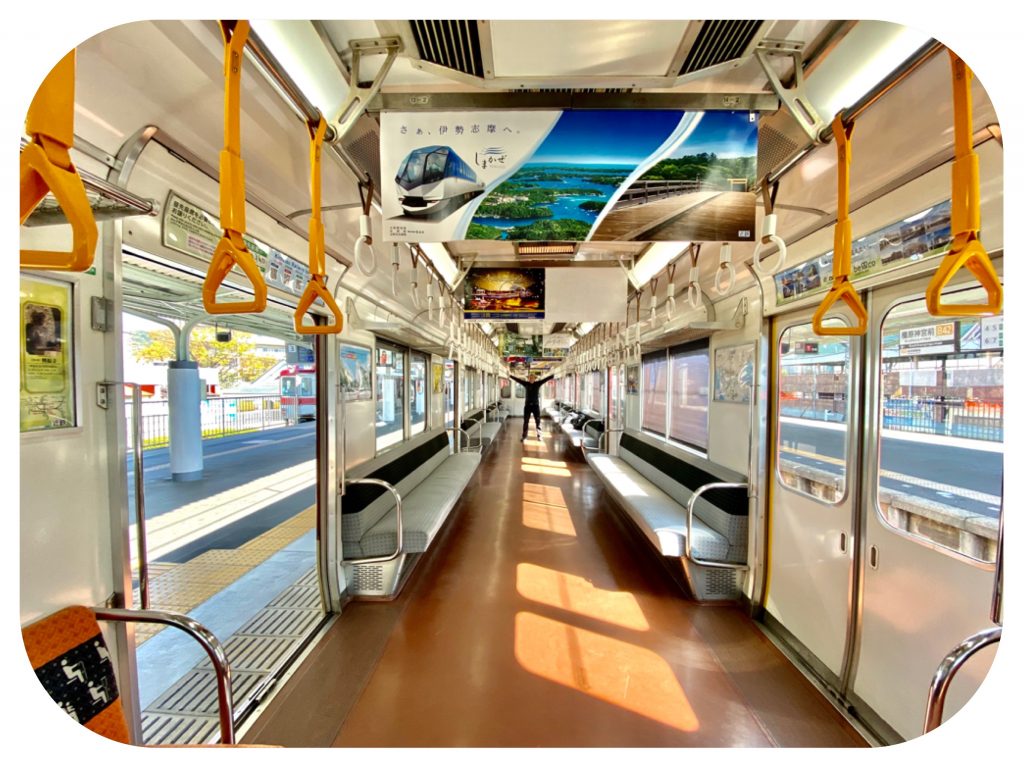 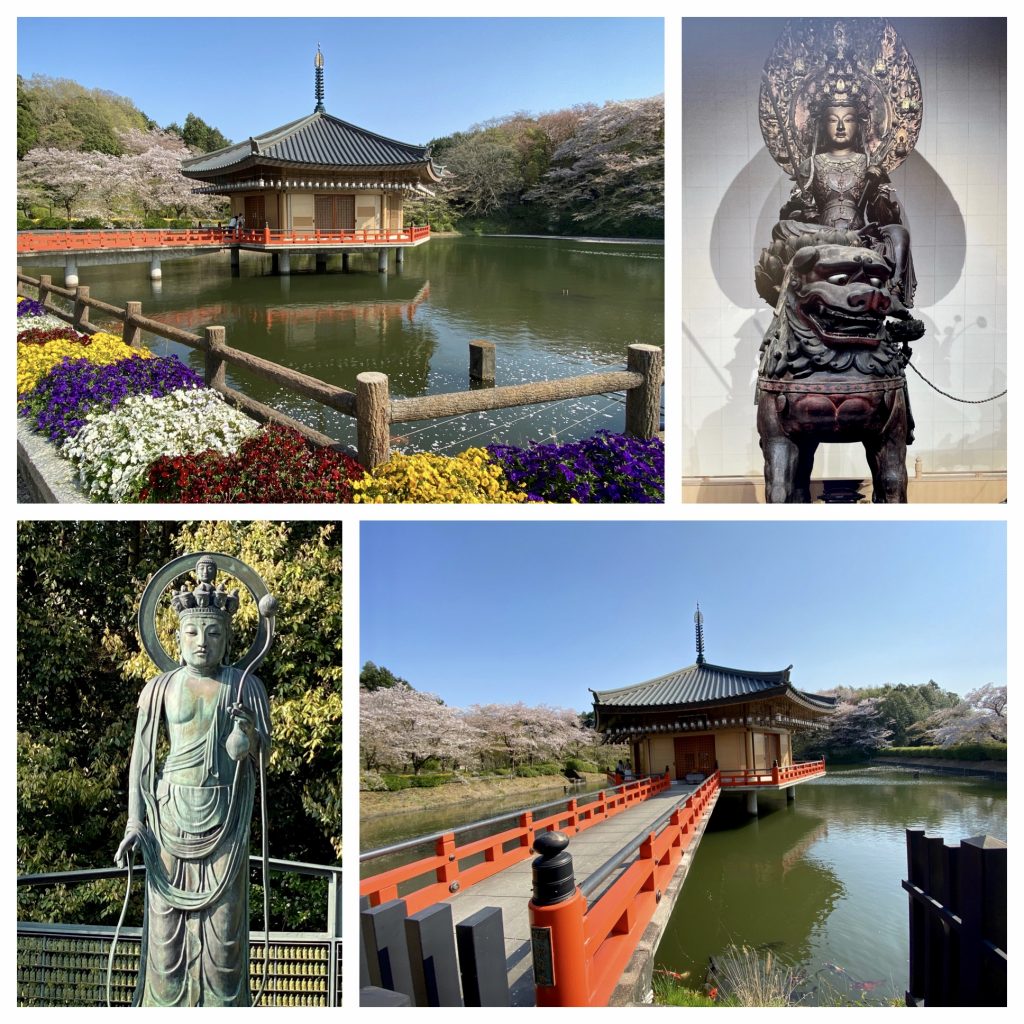 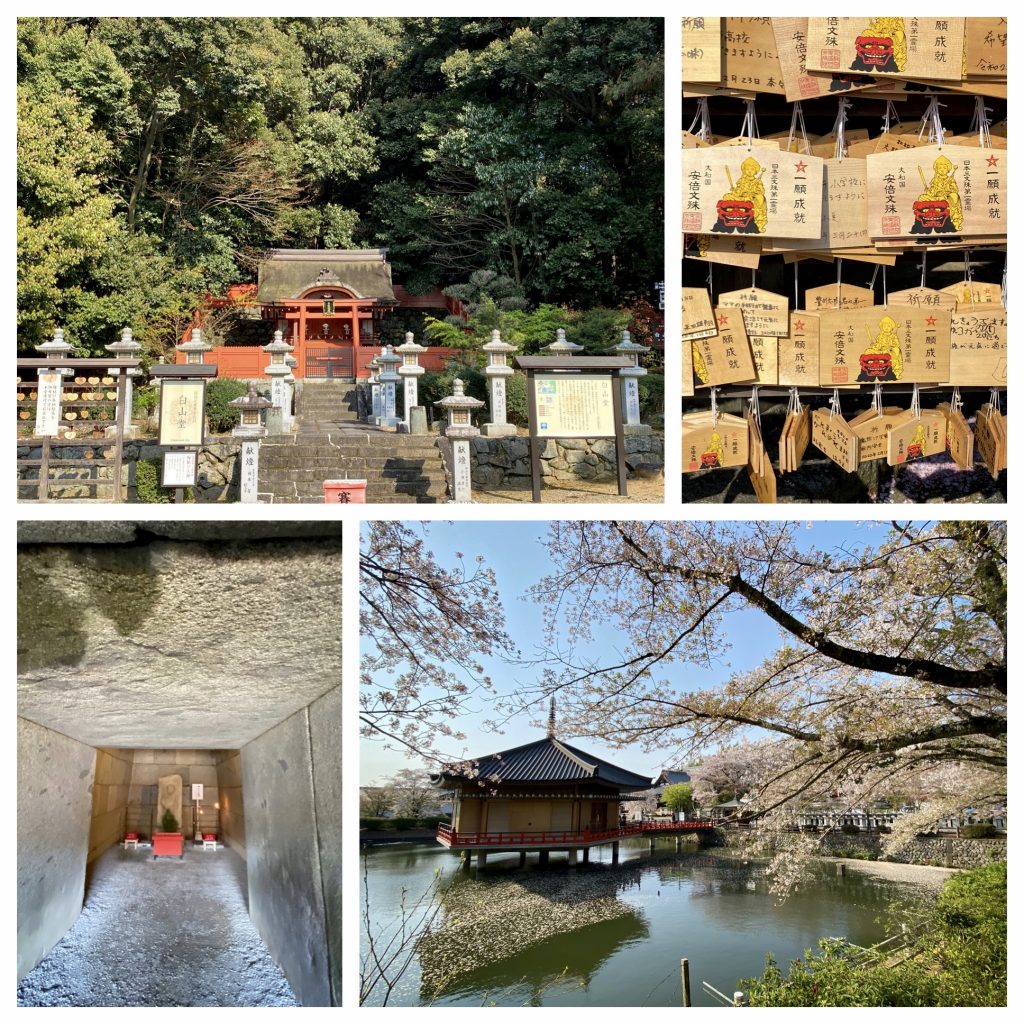 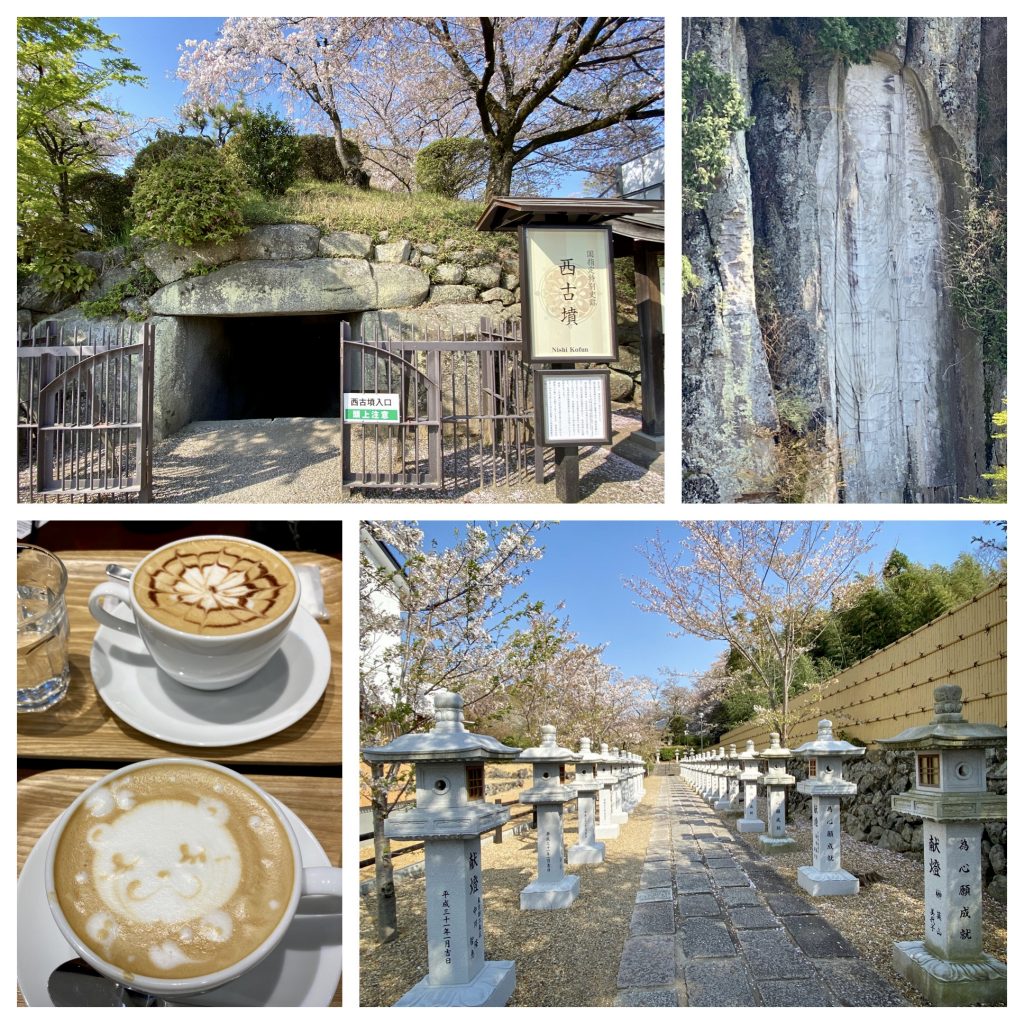 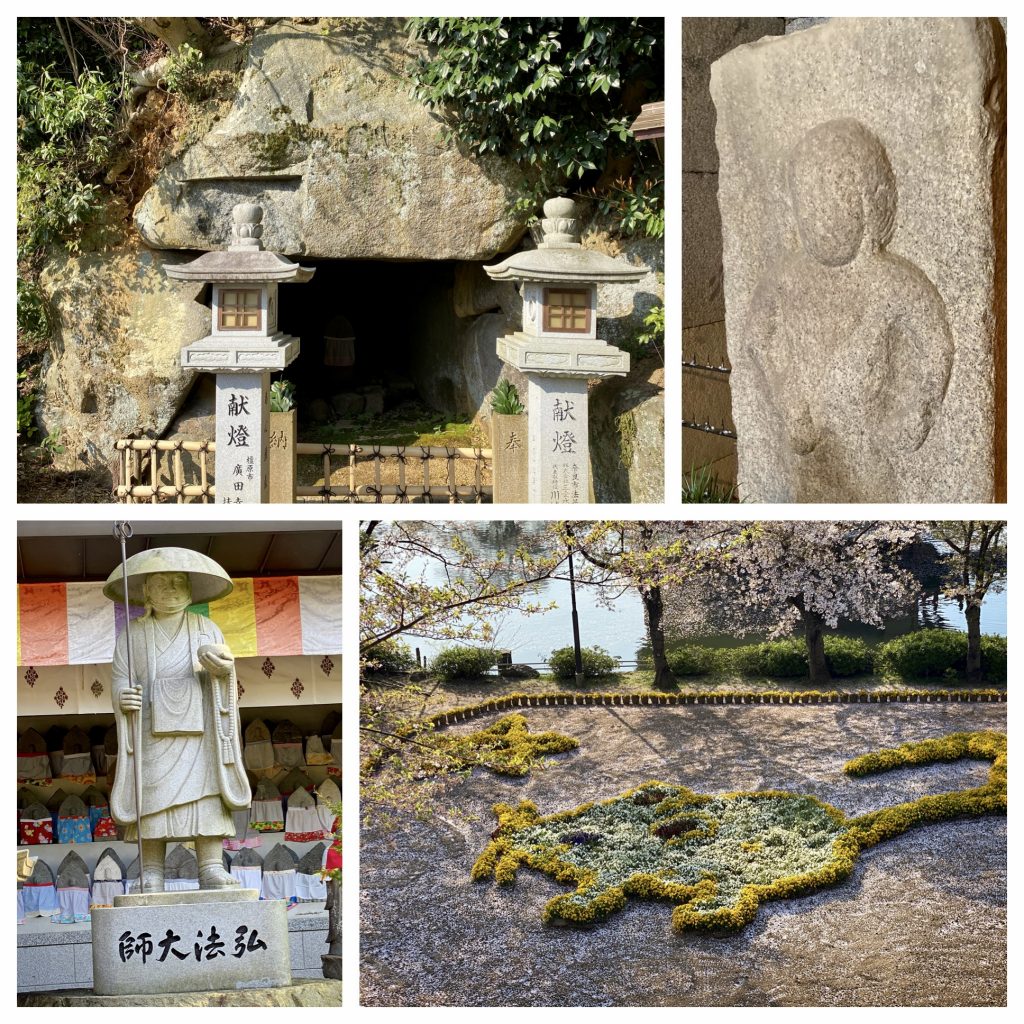 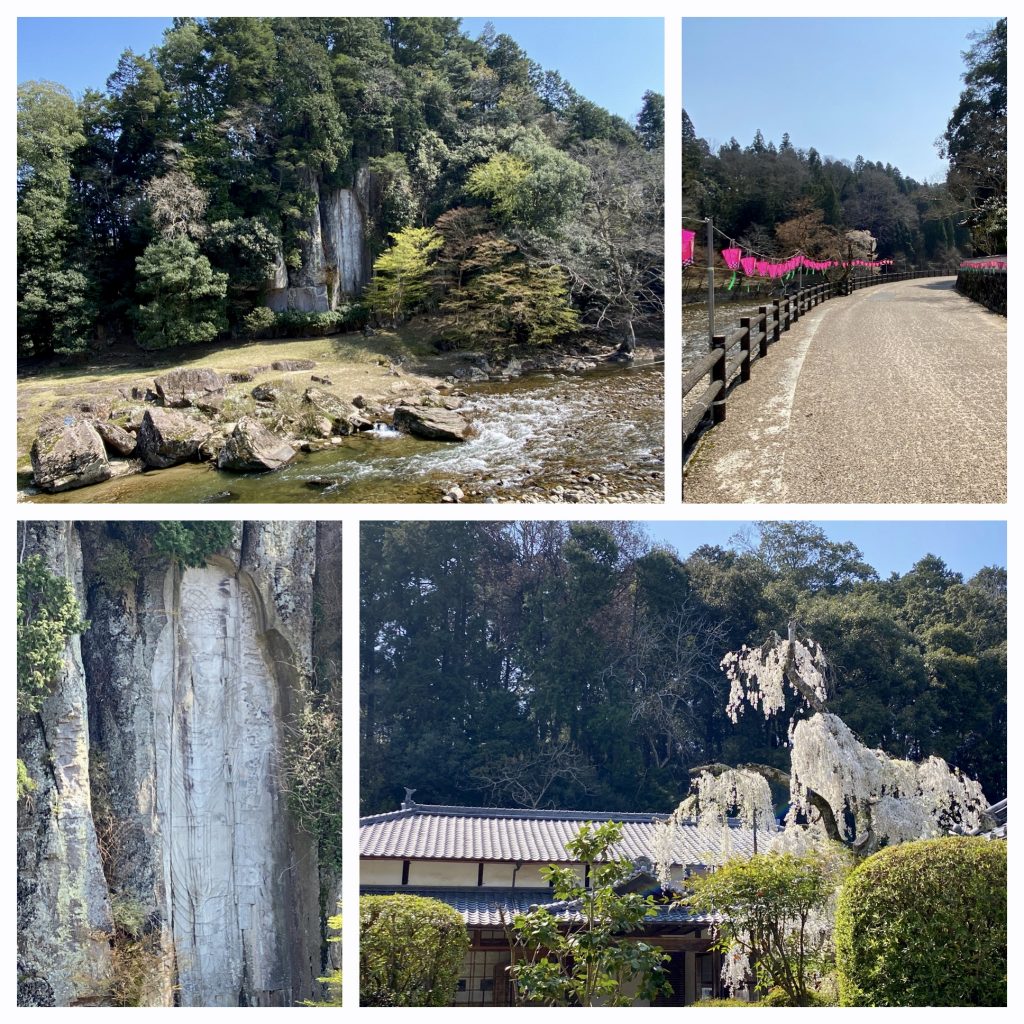 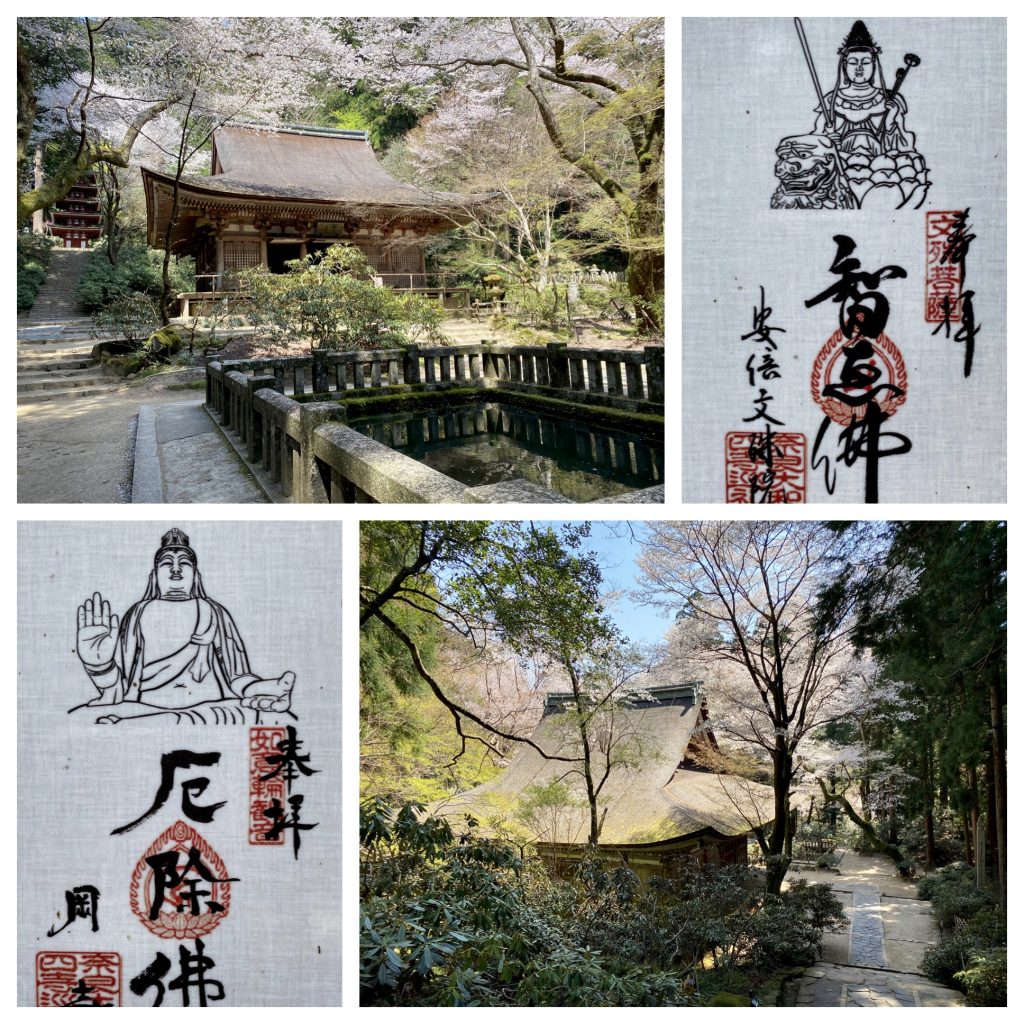 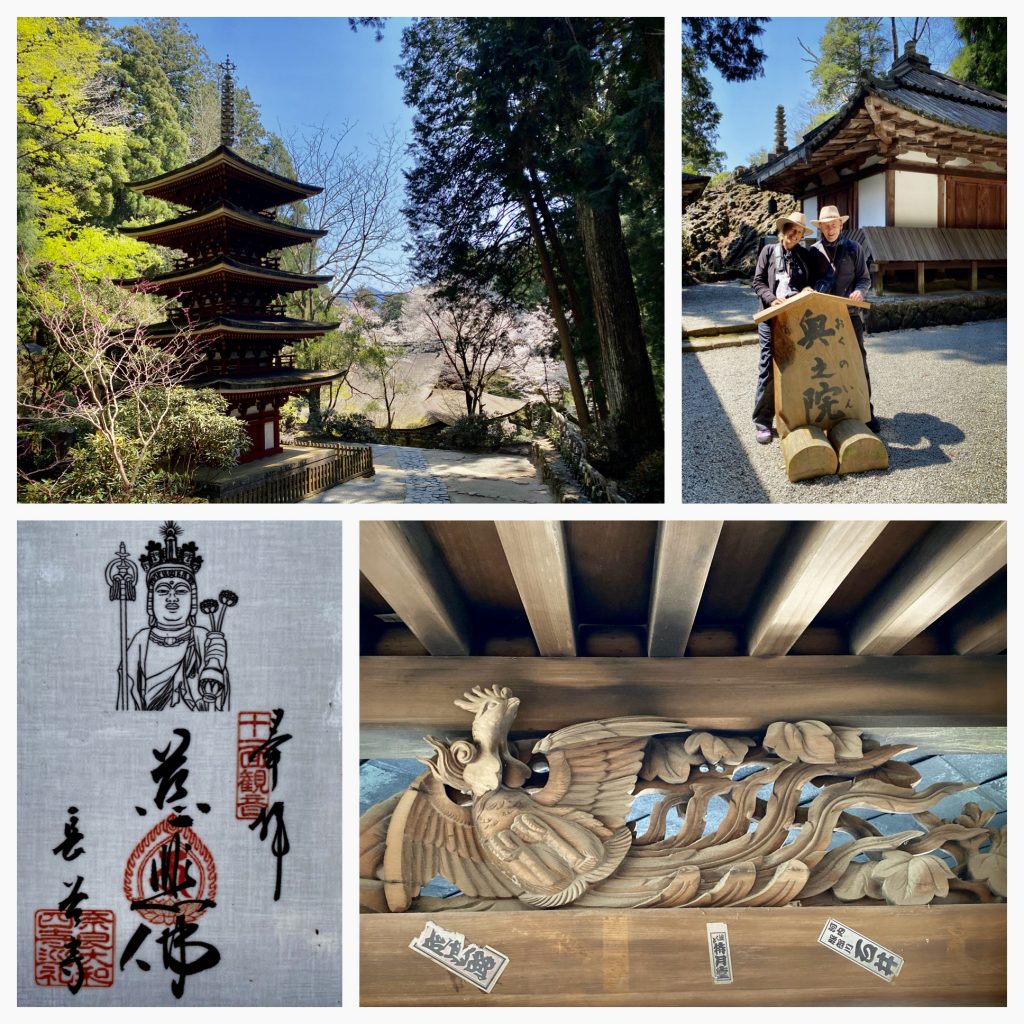 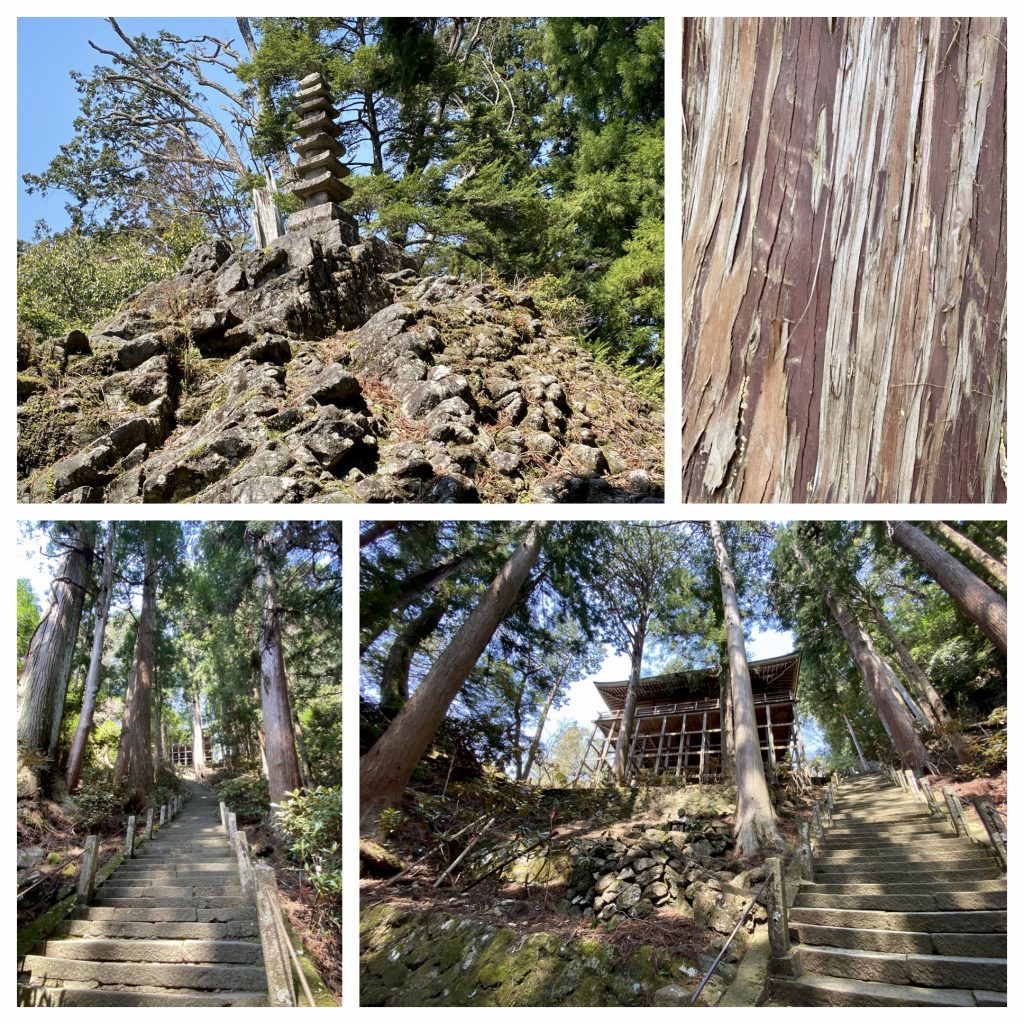 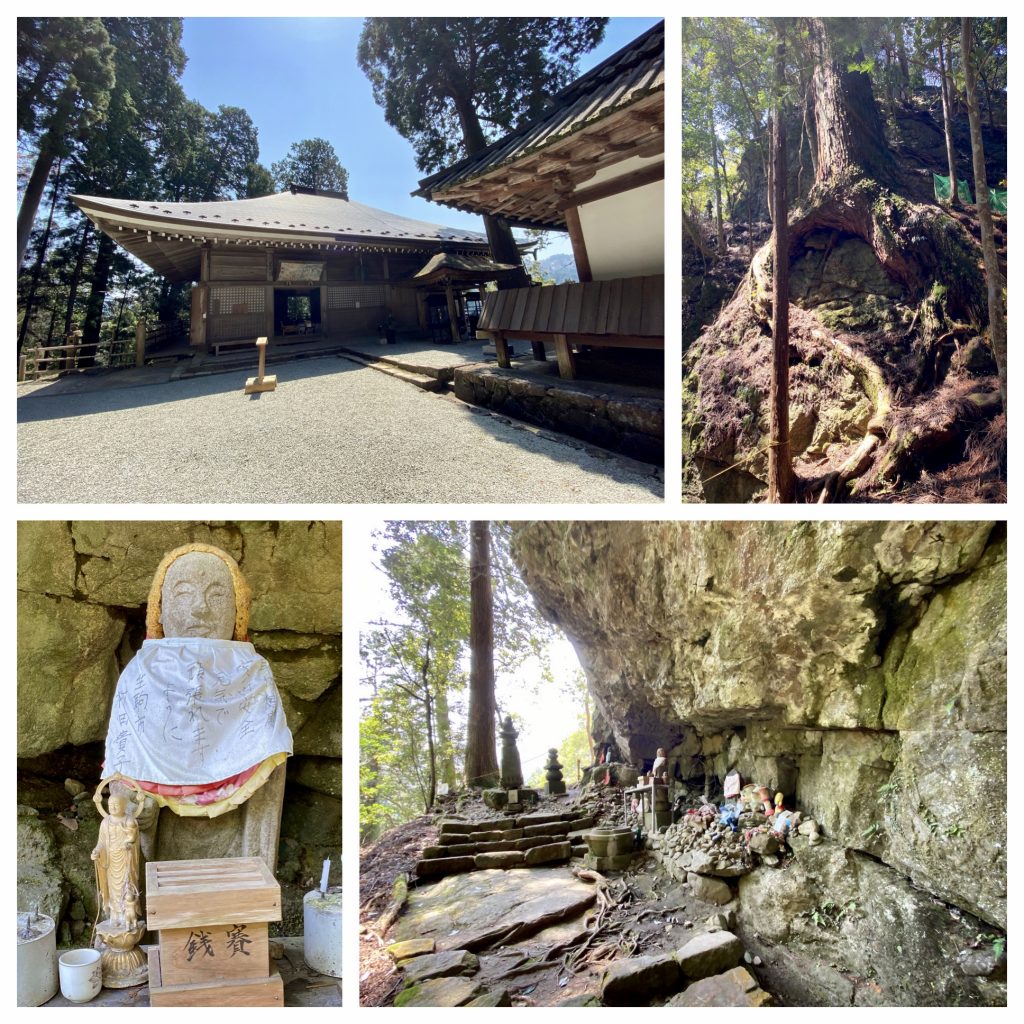 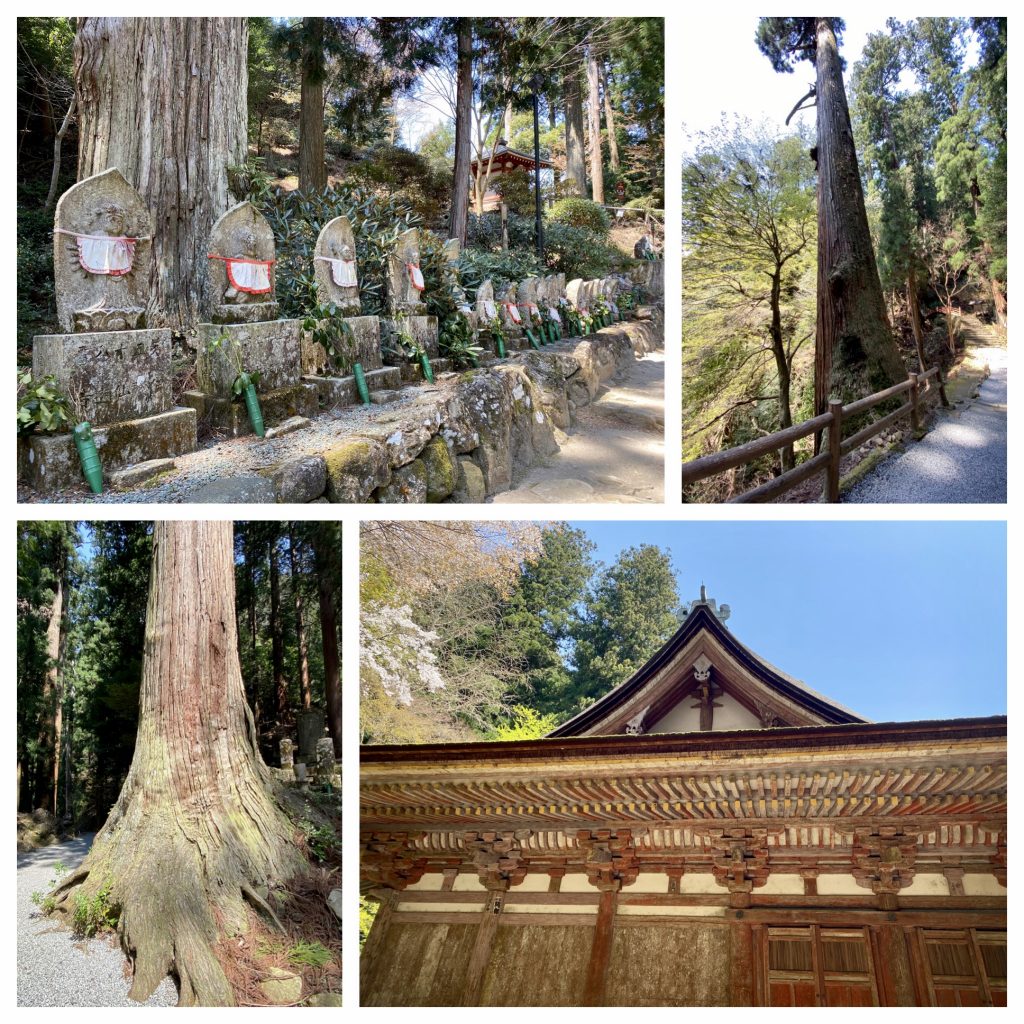 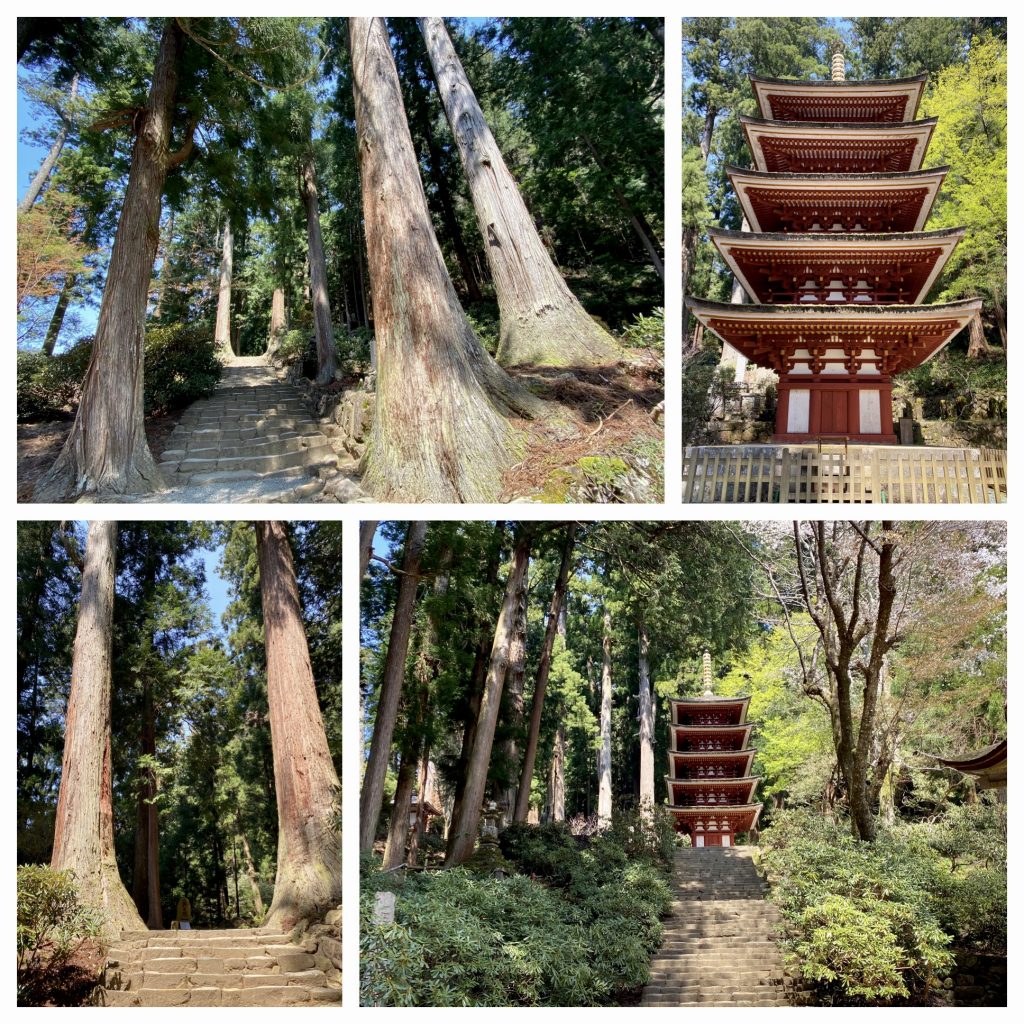 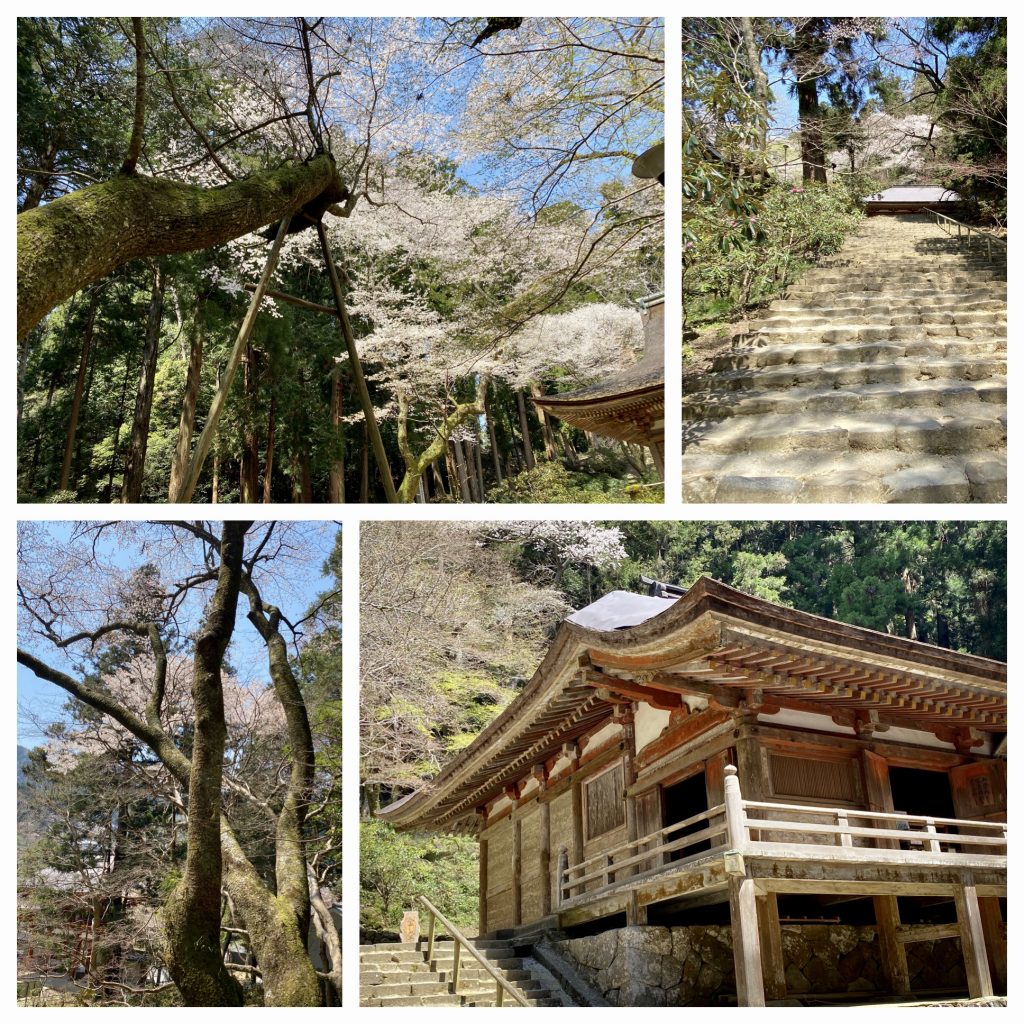 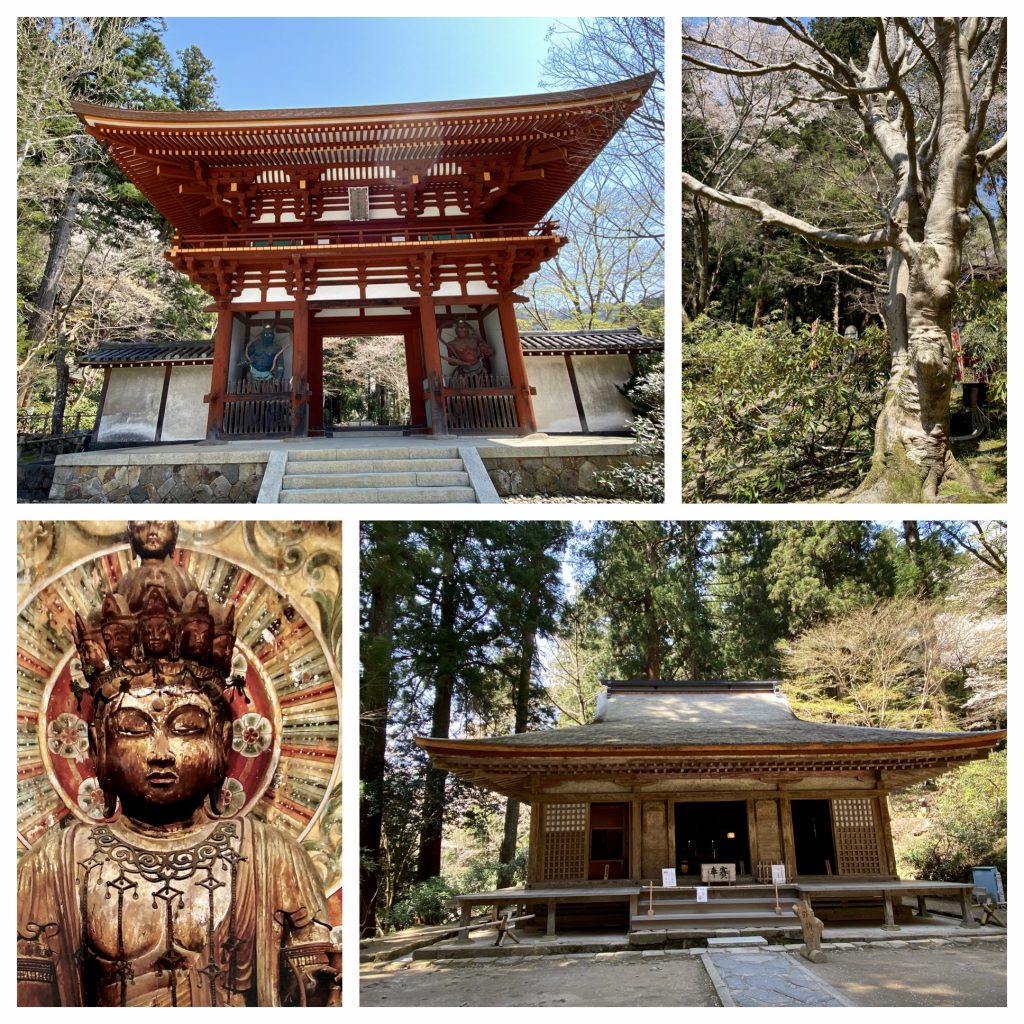 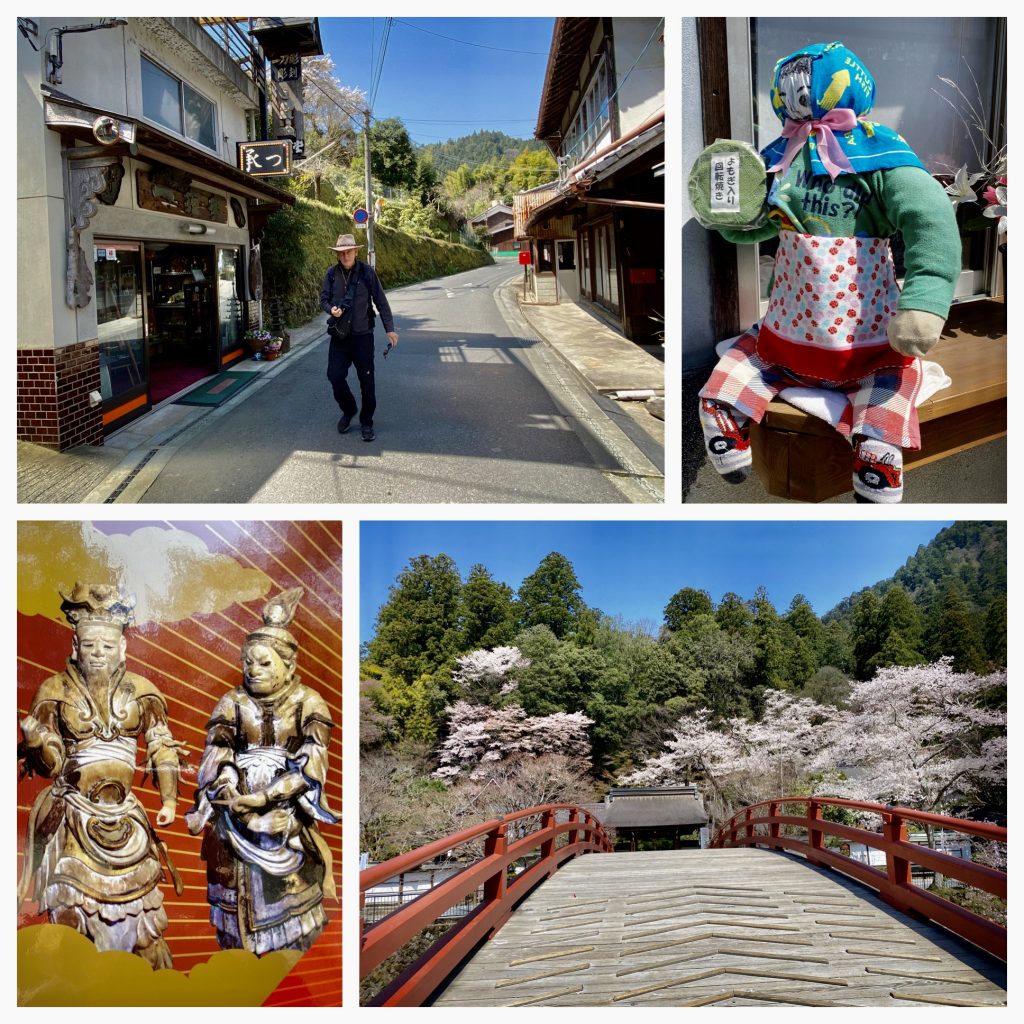 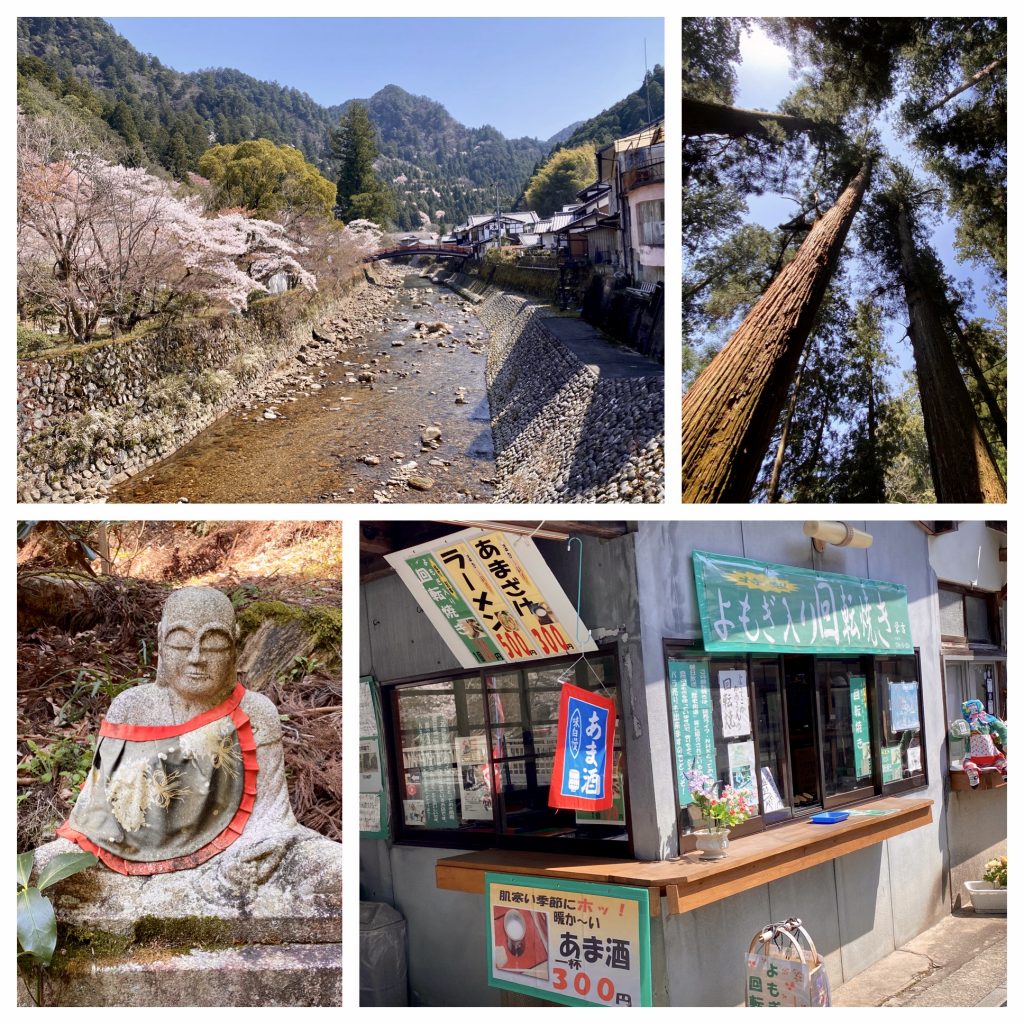 Today, we decided to take a rest and sightseeing day.

But instead of really resting in our onsen hotel, soaking our overworked feet and our fatigued legs, we decided to visit two historic temples, Muroji Temple and Abe-Monjyuin Temple, in the area where we are staying in southern Nara prefecture.

Muroji temple is a mountain temple, and the climb to the Okunoin (the inner sanctum) was up 700 stone steps, with a return via the same 700 steps down.
As most walkers will attest, descending and ascending steps are equally challenging.

So instead of a rest day, it felt like we went to the gym.
Joking aside, the truth is that by now we are pretty fit, and we did the steps with no problems.

It is just that running around all day every day, visiting temples and walking for hours, gets to be a bit fatiguing, and normally a rest day is meant to be just sitting in a cafe to clear out the inevitable fatigue.

Muroji temple is known as “The  Women’s Kōyasan.”
The name refers to Koyasan, a mountainous sacred town that is full of ancient temples.

Koyasan did not allow women to study, nor even to visit its holy temples until not long ago.
This “No Women Allowed” policy prohibited women from entering any of the temple grounds, because it was believed that the presence of women would disturb the monks’ training.
This policy lasted at Mt. Kōya until the 20th century.

But here at Murōji temple, female worshippers have been welcomed since the Kamakura Period (1185-1333), following  a generous donation by the mother of a Shogun called Keisyoin, who insinuated that she would like to visit.
Even today, about 80 percent of the visitors to this remote temple are women.

The road to the temple passes by a small village situated on the river.
Blooming cherry trees lined the river bank, and there are a few shops and eateries that provide lunch or a snack.

We paid the entrance fee, which goes toward maintaining the old temple, and went in to visit.
Most of the staff at the temple were nuns with shaved heads.

They do not allow photography inside the halls, and to enforce this, a nun sits by the main Buddha or Kannon image and looks around.
In the main hall, a friendly young nun talked to us, using a mixture of Japanese and English.

She was curious about what we were doing in Japan, and was in awe of our Heart Sutra chanting and our Saigoku pilgrimage walk.
She gave me a gift of an out of print book in English, with photos of all the statues in the temple and a description of each and history of the temple, written by the head of the temple.

I was so touched by her generosity, and thanked her many times.

She told us that it must be hard to walk the pilgrimage now with so many places closing down, but that the fact that there were no tourists in Japan right now, must be a real blessing for our journey.
“Less tourists is much better for you!,” she said confidently.
We did not disagree.
The lack of tourists only means that we can get a table anywhere we want, there are never lines anywhere, and there is less noise and fewer crowds.
It has been quiet and peaceful everywhere.

Next to the main hall there is a five-story pagoda that is 16 meters high.
The sign said that it is the smallest outdoor pagoda of its kind in Japan.
I thought it was cute, not to be boasting about the biggest and best, but the smallest.
It wasn’t that small, and it was destroyed when a typhoon caused an old cypress tree to fall on it.
It was reconstructed with donations from all over the world, including money from Christian groups.

Next to the pagoda, the path climbs up to the Okunoin at the very top of the mountain.
When we arrived, the monk working at the top selling souvenirs was really happy to see us.
He opened wide the window of his room where he sat by the heater, and motioned us to come and talk to him.

We said he must be very fit, to be climbing up and down 700 steps every day, perhaps even a few times per day.
We commented about how peaceful and beautiful the top is, and admired the views of the valley below.
He laughed and agreed, but said that he was feeling a bit “Sabishi.”

Sabishi is a Japanese term that means lonely, lonesome, homesick or missing someone.
I smiled warmly at him.
I mentioned that the walk up here reminded me of Hagurosan, where the stone steps are placed between tall and ancient cedar trees.

He knew immediately what I was talking about, and said that Hagurosan has 2643 steps, which you also have to walk both ways.
I told him we had walked the three sacred mountains of the Dewa Sanzan, which includes Mount Haguro, Mount Gassan and Mount Yudono.

We sat on a wooden bench overlooking the verdant valley, and had our tea and packed lunch.
Then we said our goodbyes to the sweet monk who seemed sad to see us go.
We climbed down the stairs, surrounded by the thick forest.
It is said that sacred dragons dwell in these forests.

The main Buddha of worship in Muroji is the Shaka Nyorai (Shakyamuni), or the Buddha of Enlightenment.
The statue, with its meditative expression, was made in the 8th century, and was originally an old style Healing Buddha.

The Kon-do Hall houses the Shaka Nyorai, the Twelve Heavenly Generals, and other statues.
The Kon-do hall was built in the mid-9th century, and is one of the oldest buildings in this temple.
Its roof rafters and thatching are very beautifully and meticulously built.

The temple also houses a seated healing Nyoirin Kannon statue with a gentle face, and is said to be one of the best Nyoirin Kannon statues in Japan.
The statue has 6 arms, each of them holding sacred objects such as a wish-granting jewel and a Dharma wheel, which grant prayers for health, longevity and an easy childbirth.

The Miroku Bosatsu statue is known as the Buddha of the Future (Maitreya).
This Buddhist statue, created in the 8th century, is one of the oldest statues in this temple.
He has a relatively big head which makes him look a bit childlike.

We prayed for the healing of the planet and for the return of light to all sentient beings, and left the temple.
While waiting to the bus, we drank hot Amazake, which is a very tasty hot Koji rice drink that is often served with grated ginger.

The old lady who owned the stall also made green tea mochi filled with sweet bean paste. They were warm and tasty.

Next we visited the Abe-Monjyuin Temple, following the same road that we had walked on the day before.
The temple was founded in 645, and is one of the oldest Buddhist temples in Japan.

The Monjyu Bosatsu, or the Buddha of Wisdom enshrined in the main hall, was created by Kaikei, who was one of Japan’s main sculptors in the 13th century.
The statue is wonderful and big.

The Monjyu Buddha is represented riding a lion and holding a raised sword in his right hand, symbolizing the cutting away of ignorance.
In his left hand he holds a lotus flower, symbolizing love and compassion.
He is surrounded by four attendants.

Benzaiten is a deity who is believed to bring good luck.
She has eight arms and 15 boy attendants.
she is enshrined in the  floating hall that is situated in the middle of a pond, and is accessible by a colorful bridge.

Every year, the temple creates the symbol of the new year from bds of flowers.
This year (2020) they created two rats (it is the year of the rat) from flower beds.
The full view is only available from above.

We climbed up the hill to see the symbols, and met an Indian woman sitting there.
She seemed not to be a tourist, but to be living in Japan.
She started a conversation with me, and I regretted later not taking the time to talk with her at length.
Perhaps she was Sabishi or just needed somebody to talk to….

But it was getting late and I wanted to get to our hotel before dark and with some time to soak in the hot springs and truly rest.
The temple grounds has two old Kofun Mounds with a cave below.

In one of them we saw a carved stone statue of Fudou Myoo, the Unmoving Guardian that was carved by Saint Kōbō Daishi, the founder of esoteric Shingon Buddhism in Japan.
The walls and ceiling of the Kofun caves were made with one huge piece of grey stone each.

The temple also explained that in ancient China, there were two philosophies, “The Yin and Yang” and the “Five Elements,” which tried to explain all things in the universe.

“Yin and Yang” refers to the relative world, in which all things are said  to have their counterpart, in order to create a harmonious balance.

The two opposing energies, like positive and negative, the heaven and earth, the sun and the moon, a male and a female, create a moving current.

The “Five Elements” explained all things and all phenomena in terms of the movement of the five elements of wood, fire, earth, metal and water.
This means that if there is a rise of fire energy, it can be recognized and balanced by applying water, etc.

The philosophy was introduced to Japan in the 6th century, and was an accepted method to forecast personal and national fortunes, and was developed into a uniquely Japanese system known as “Onmyō-dō”.

Wishing you love and blessings,