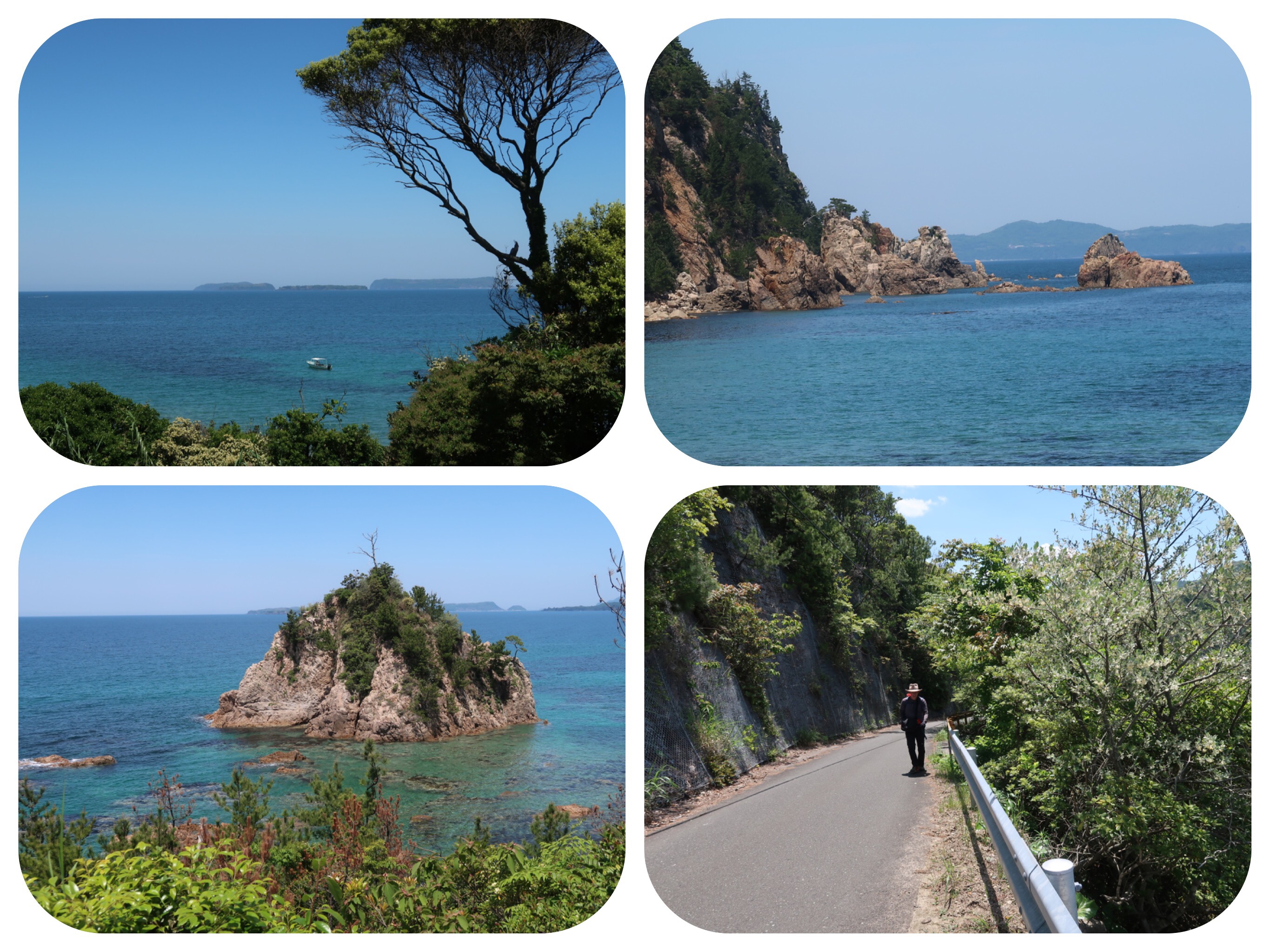 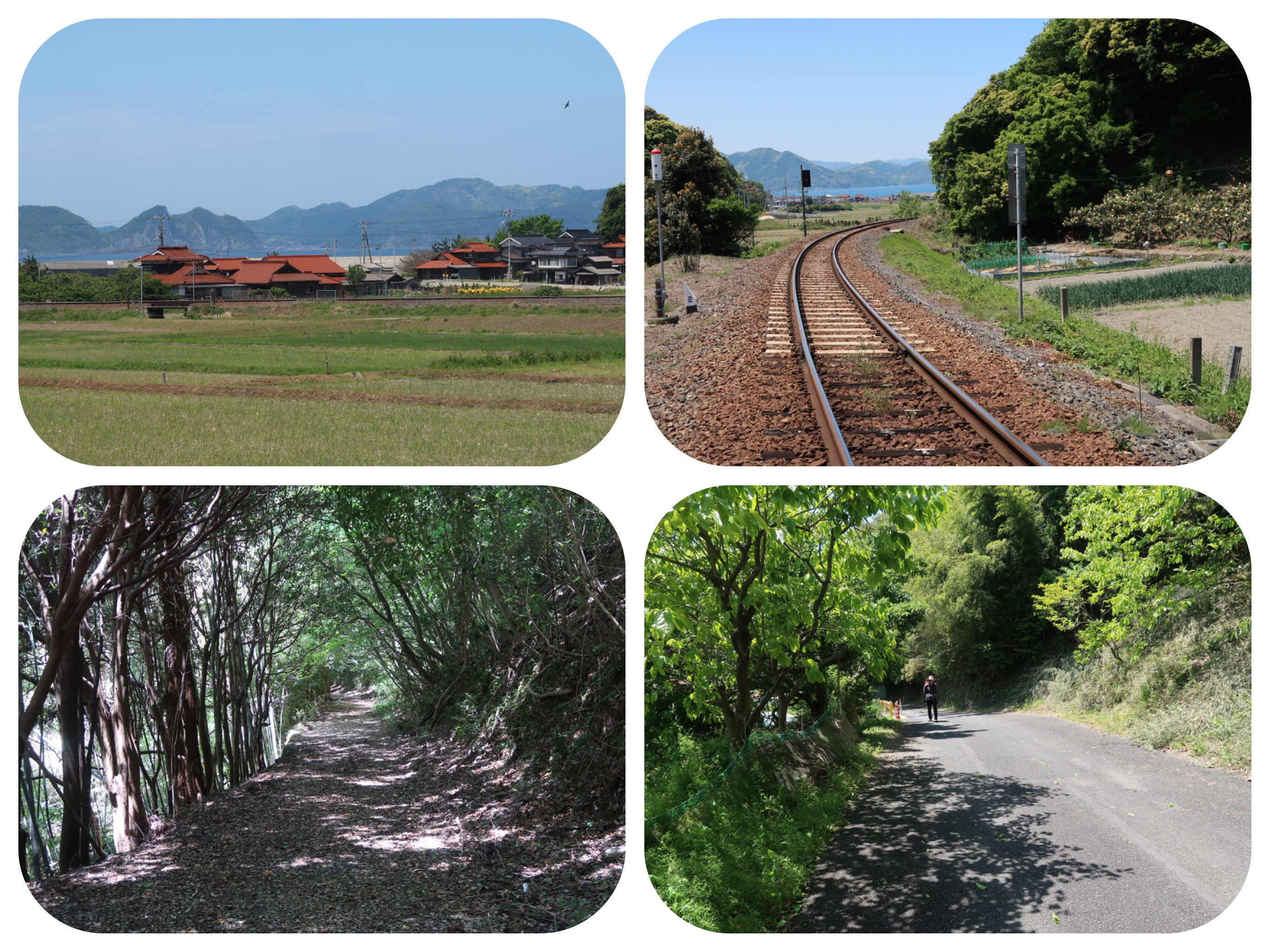 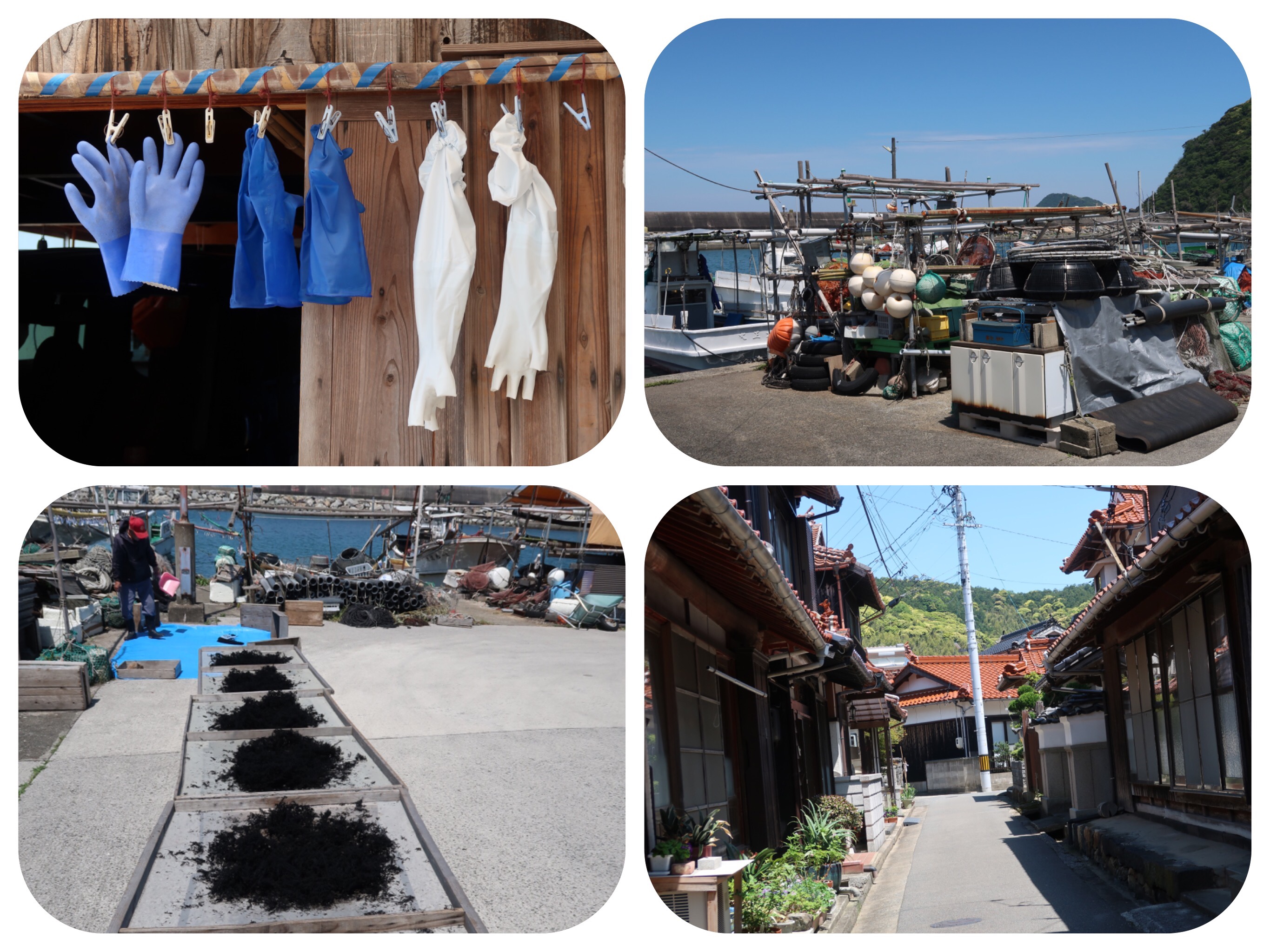 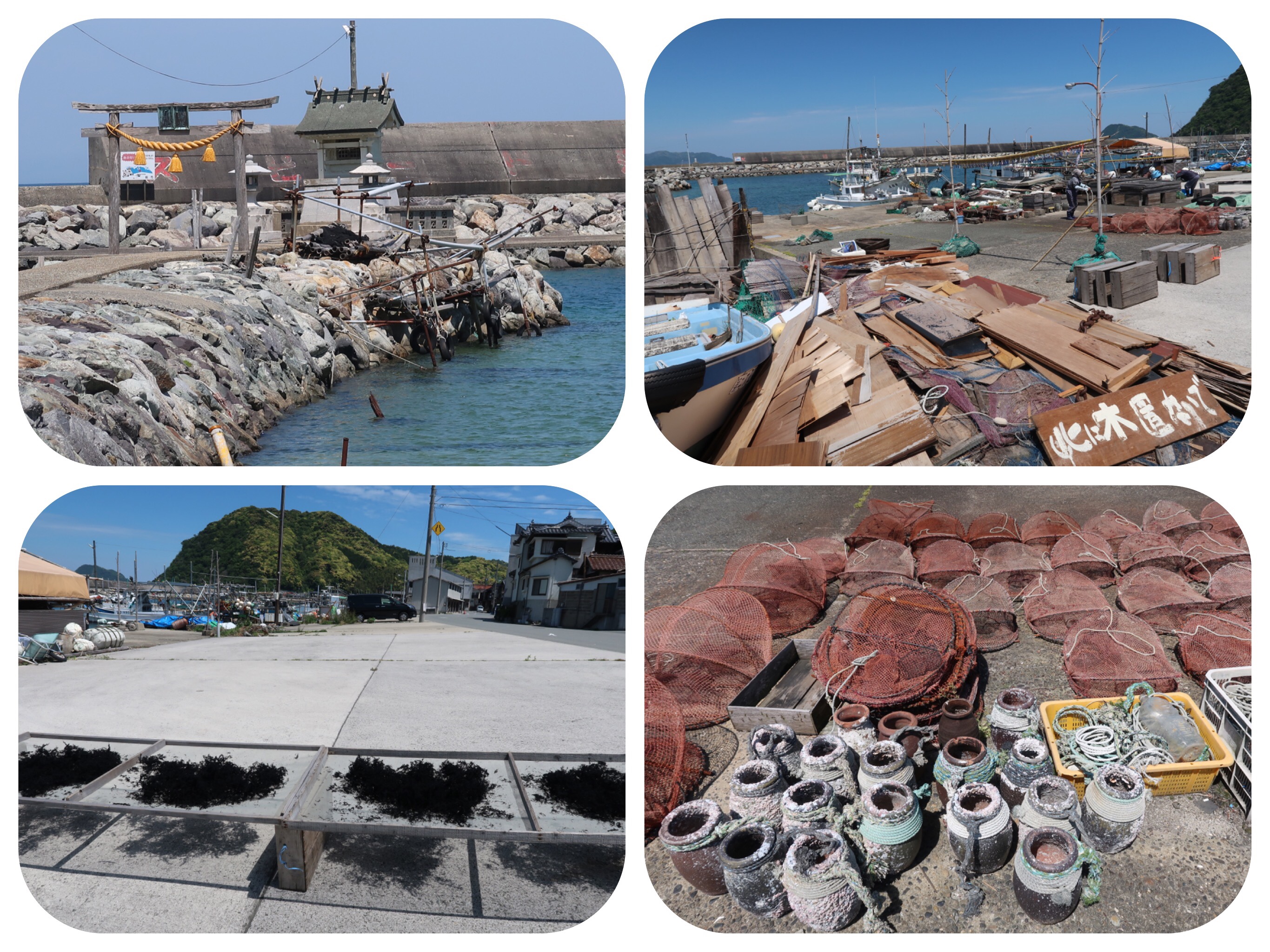 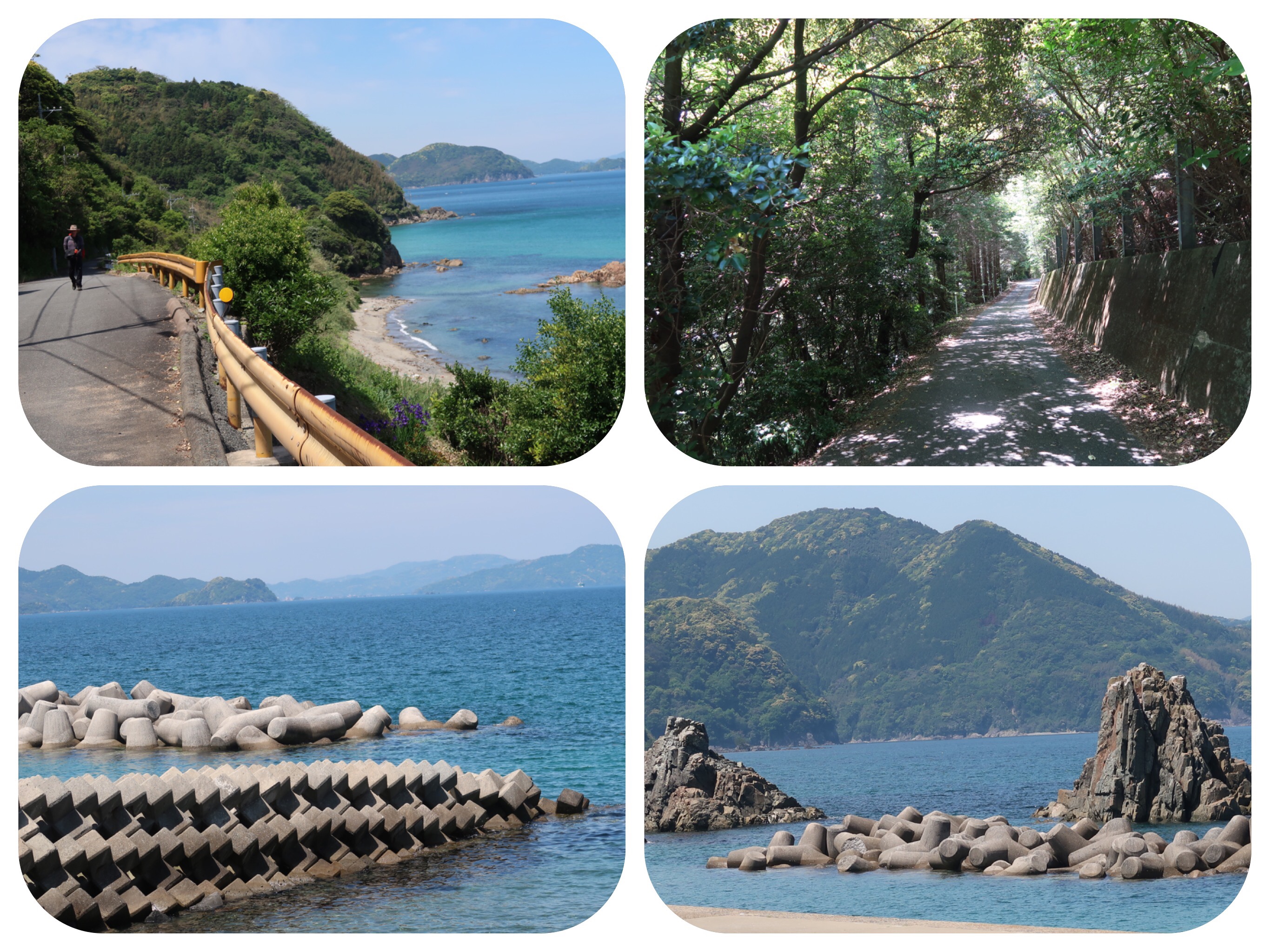 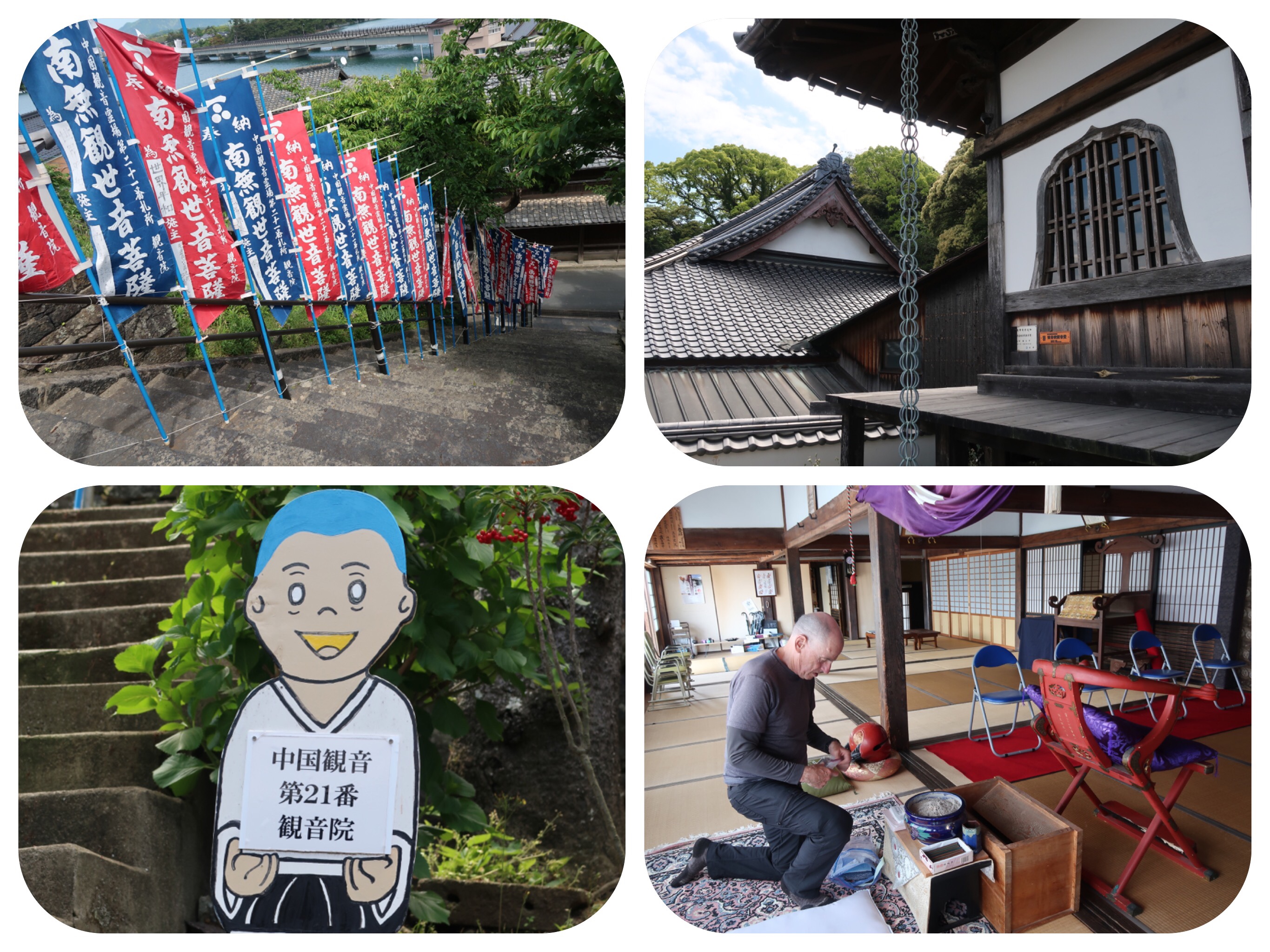 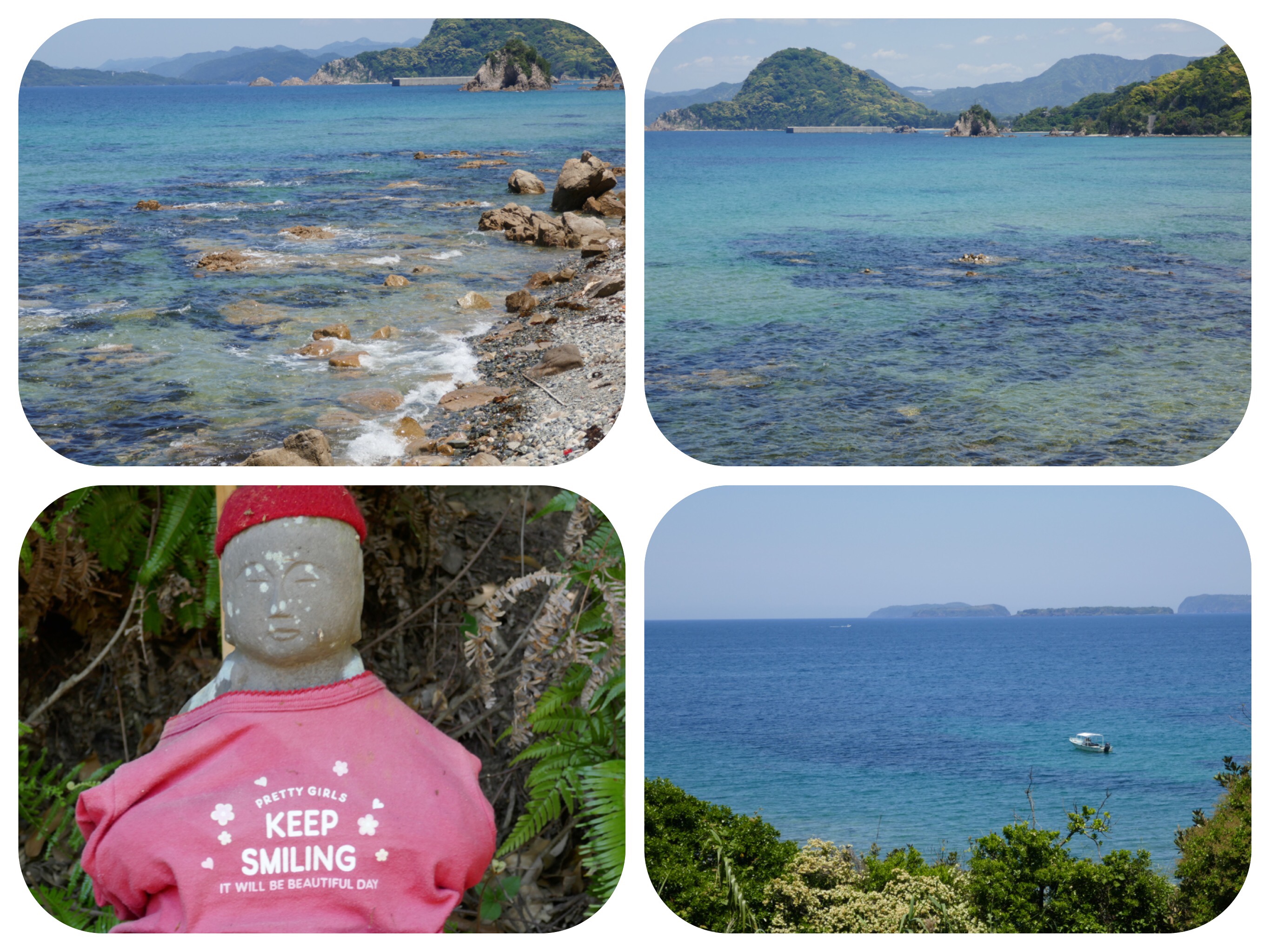 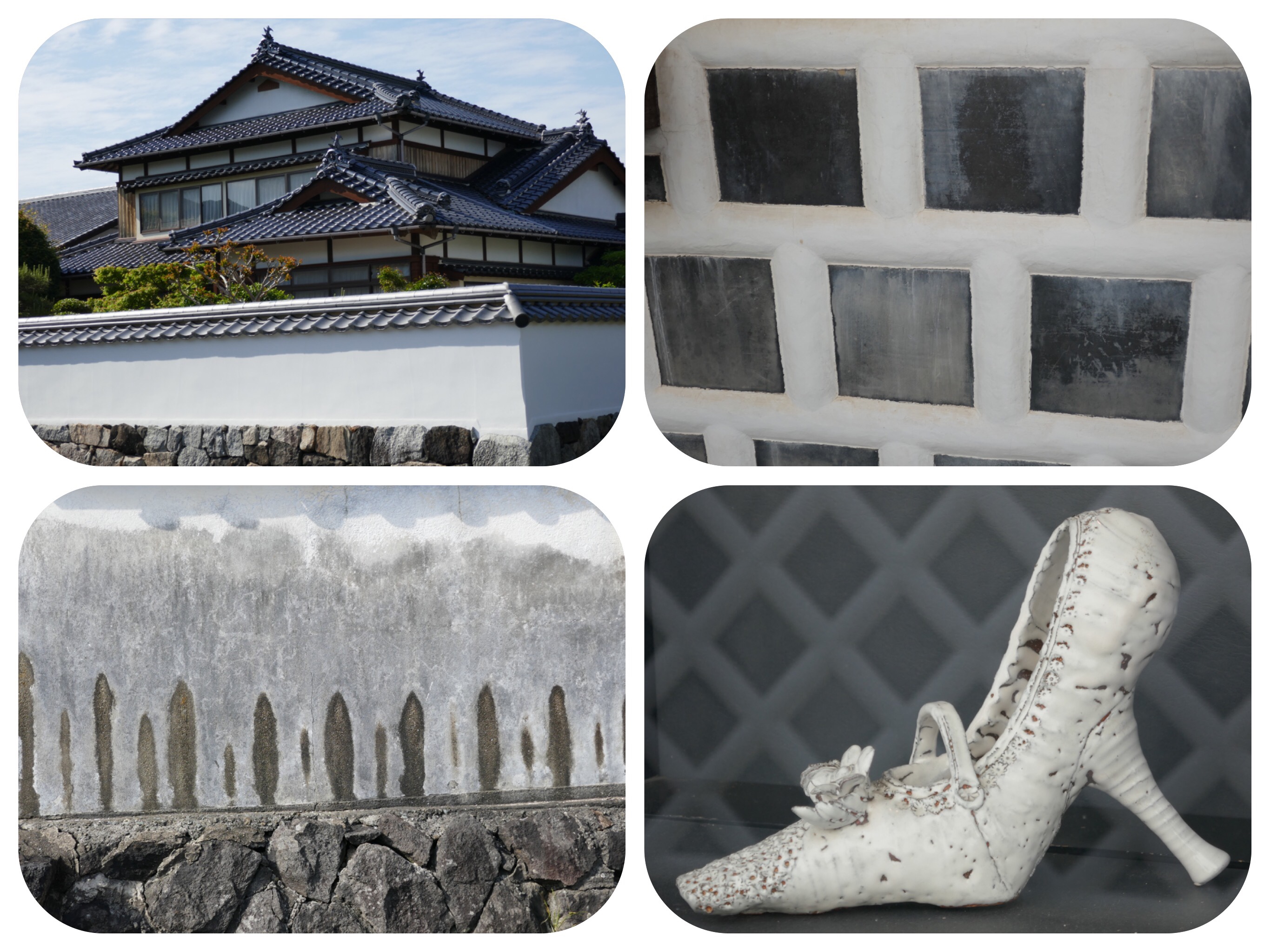 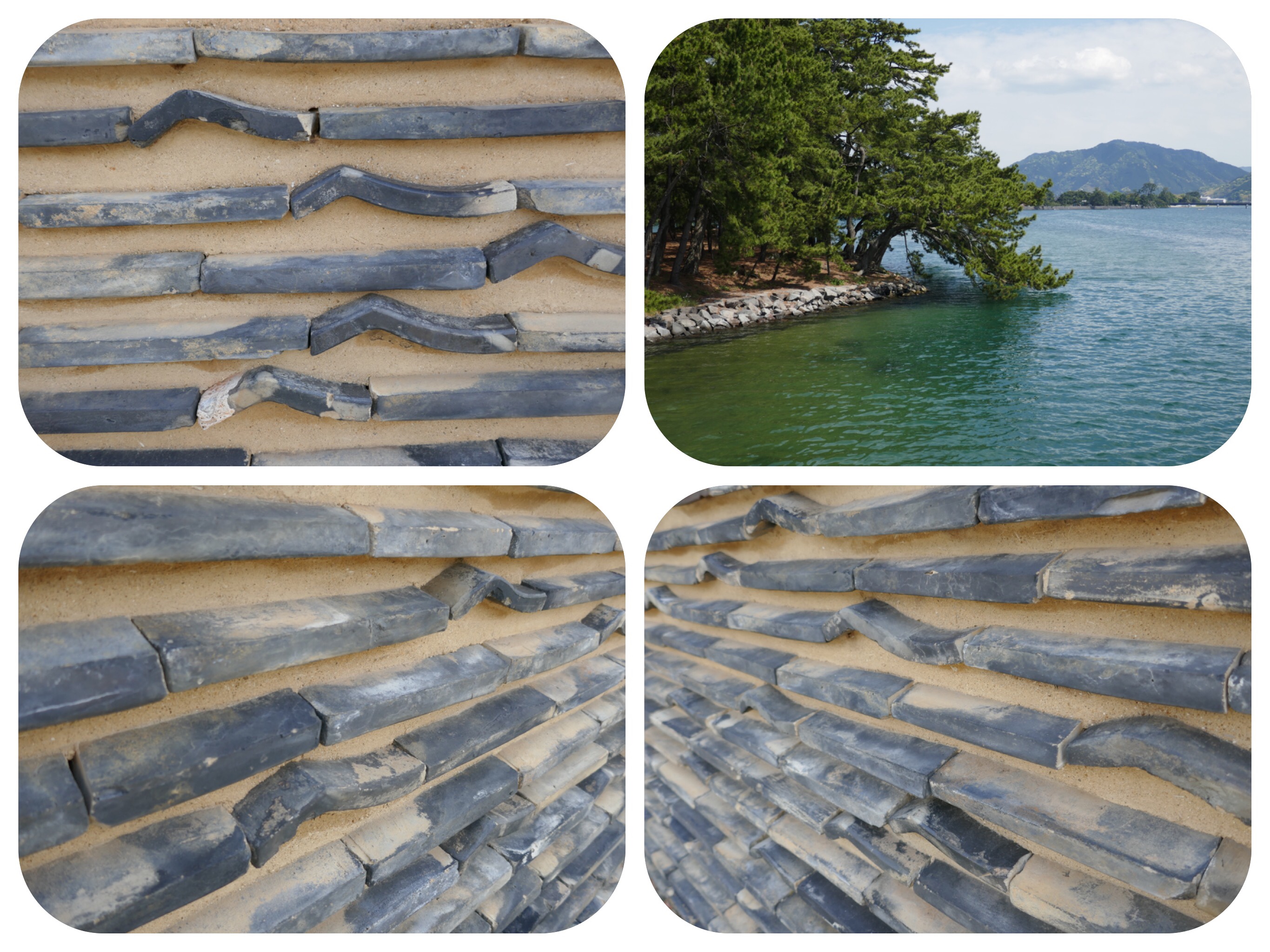 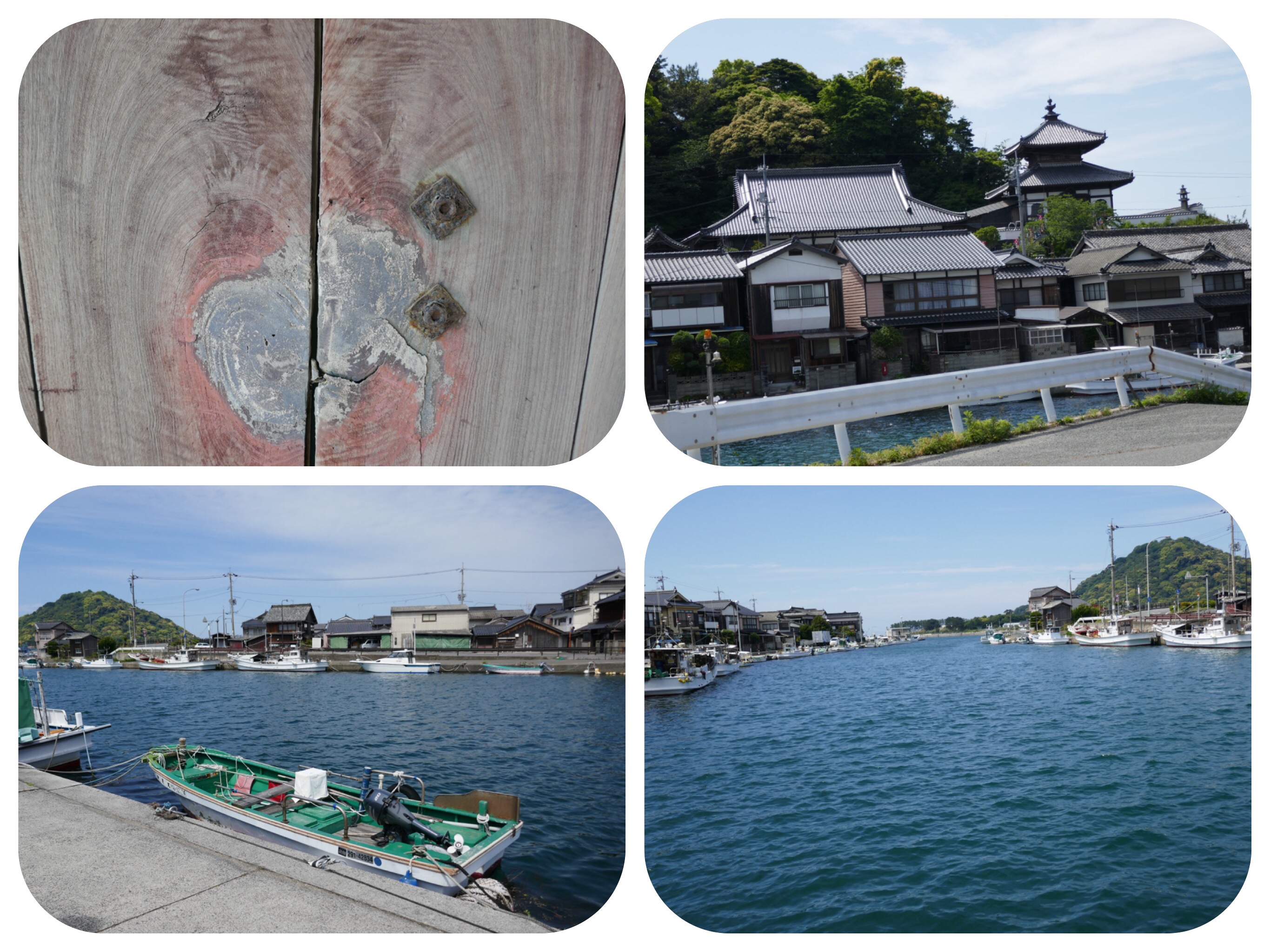 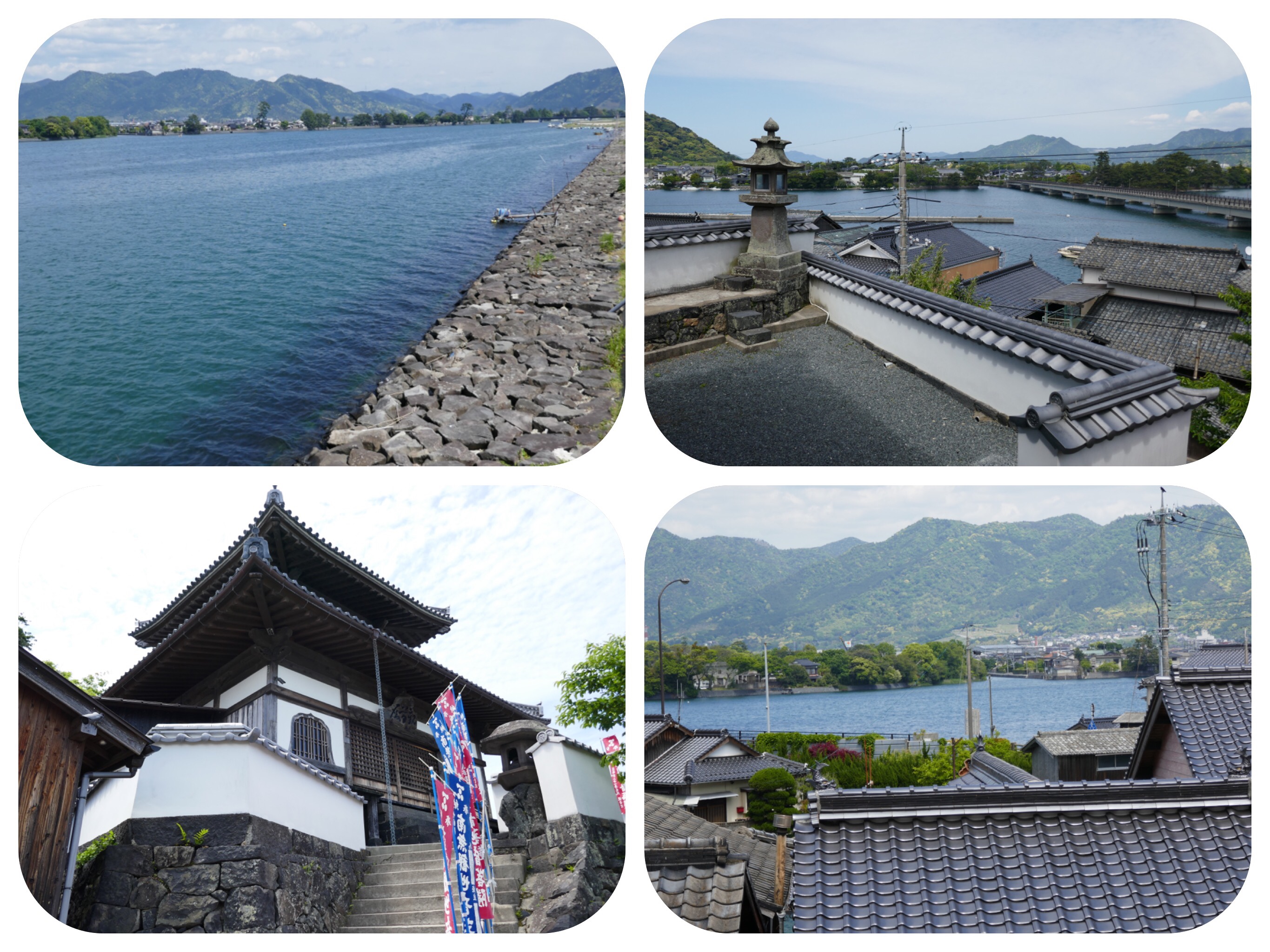 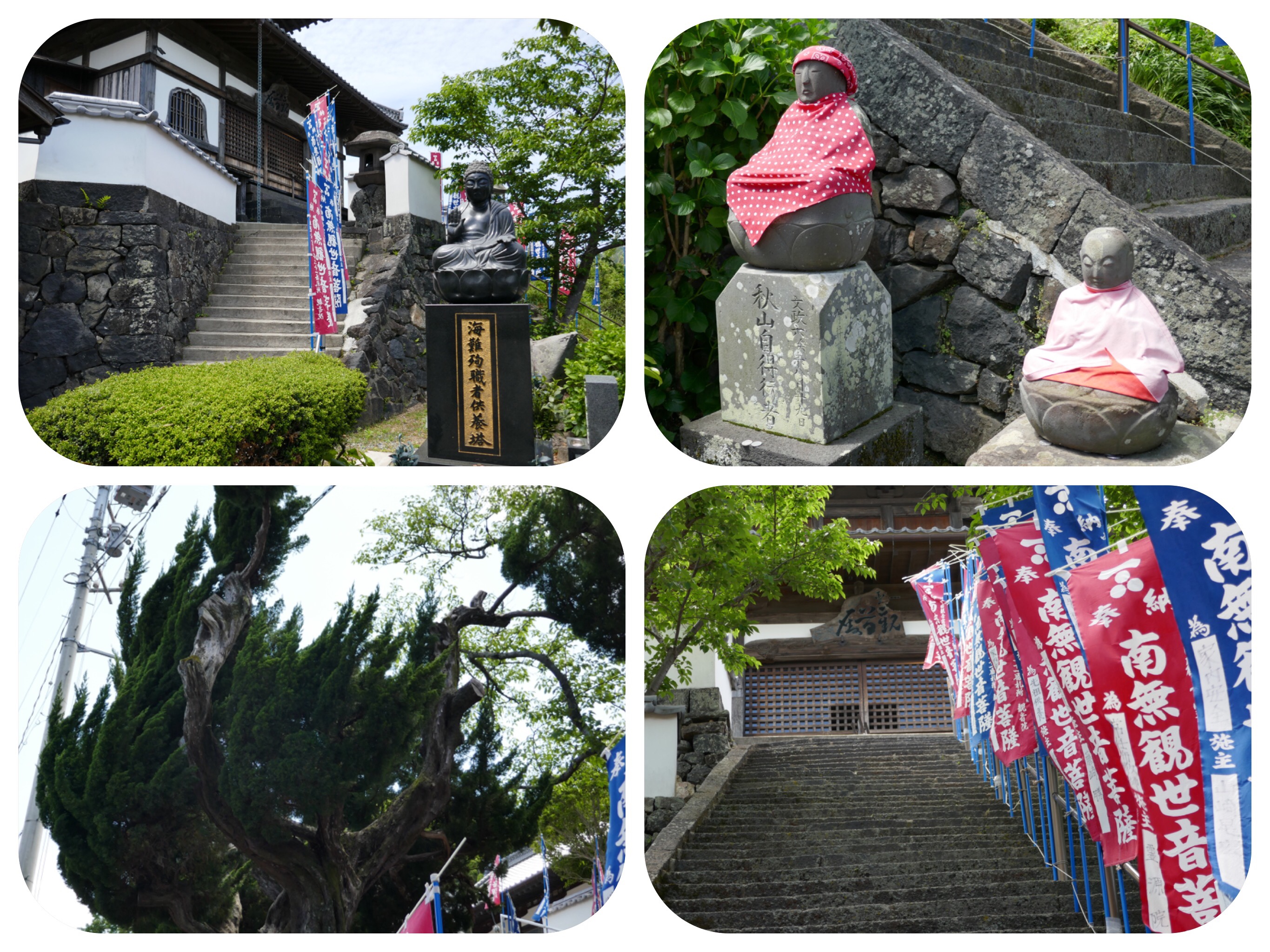 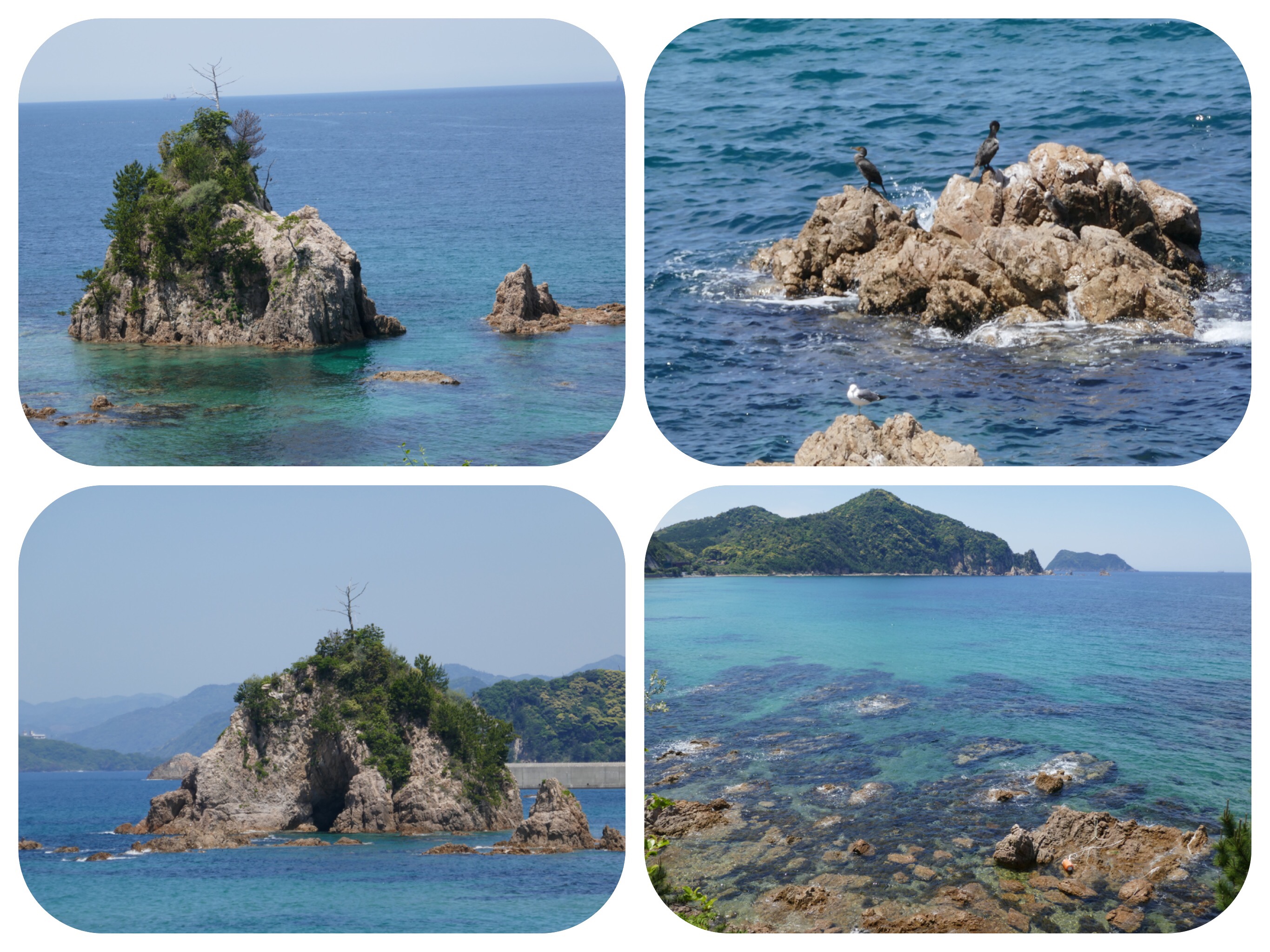 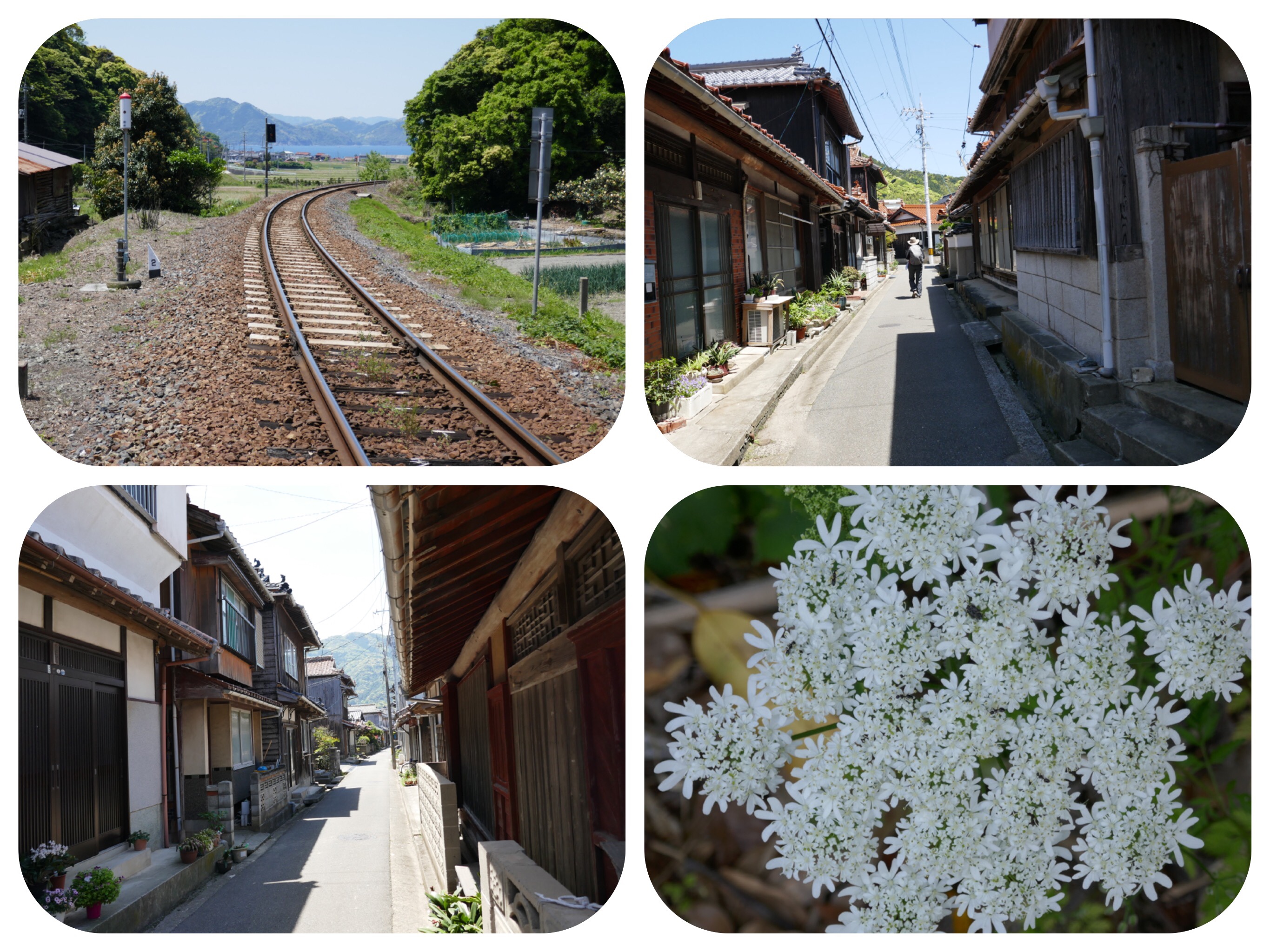 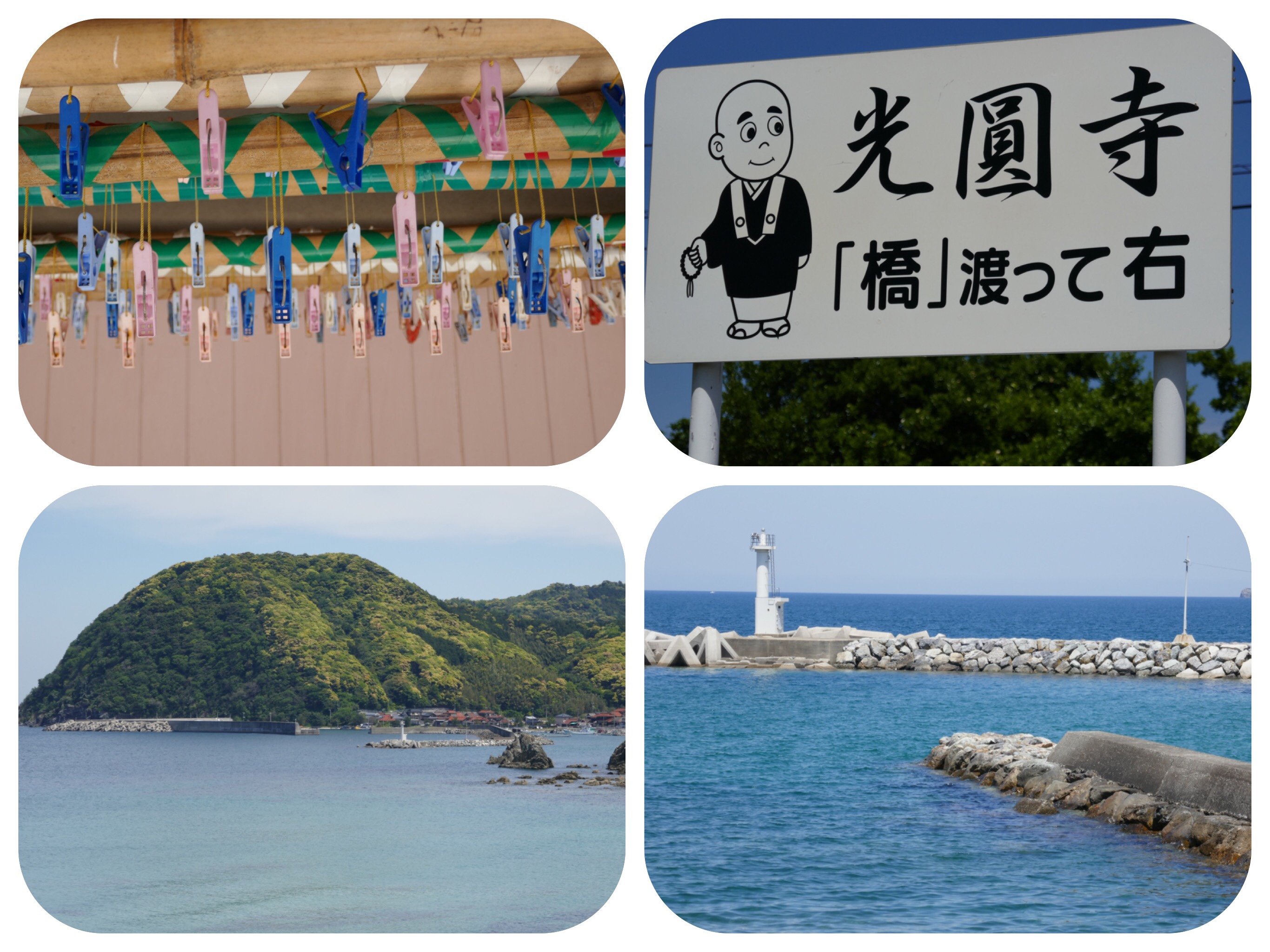 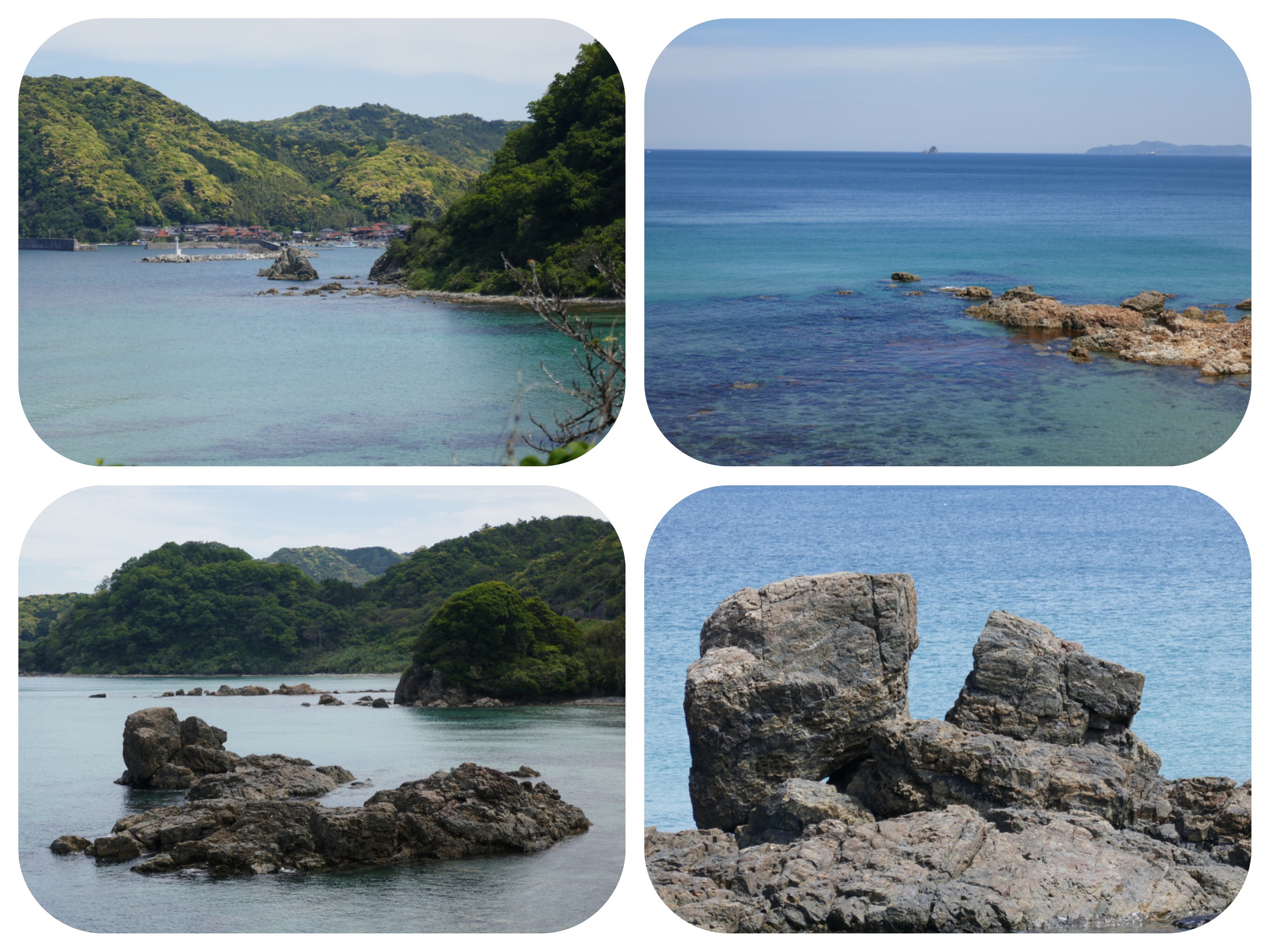 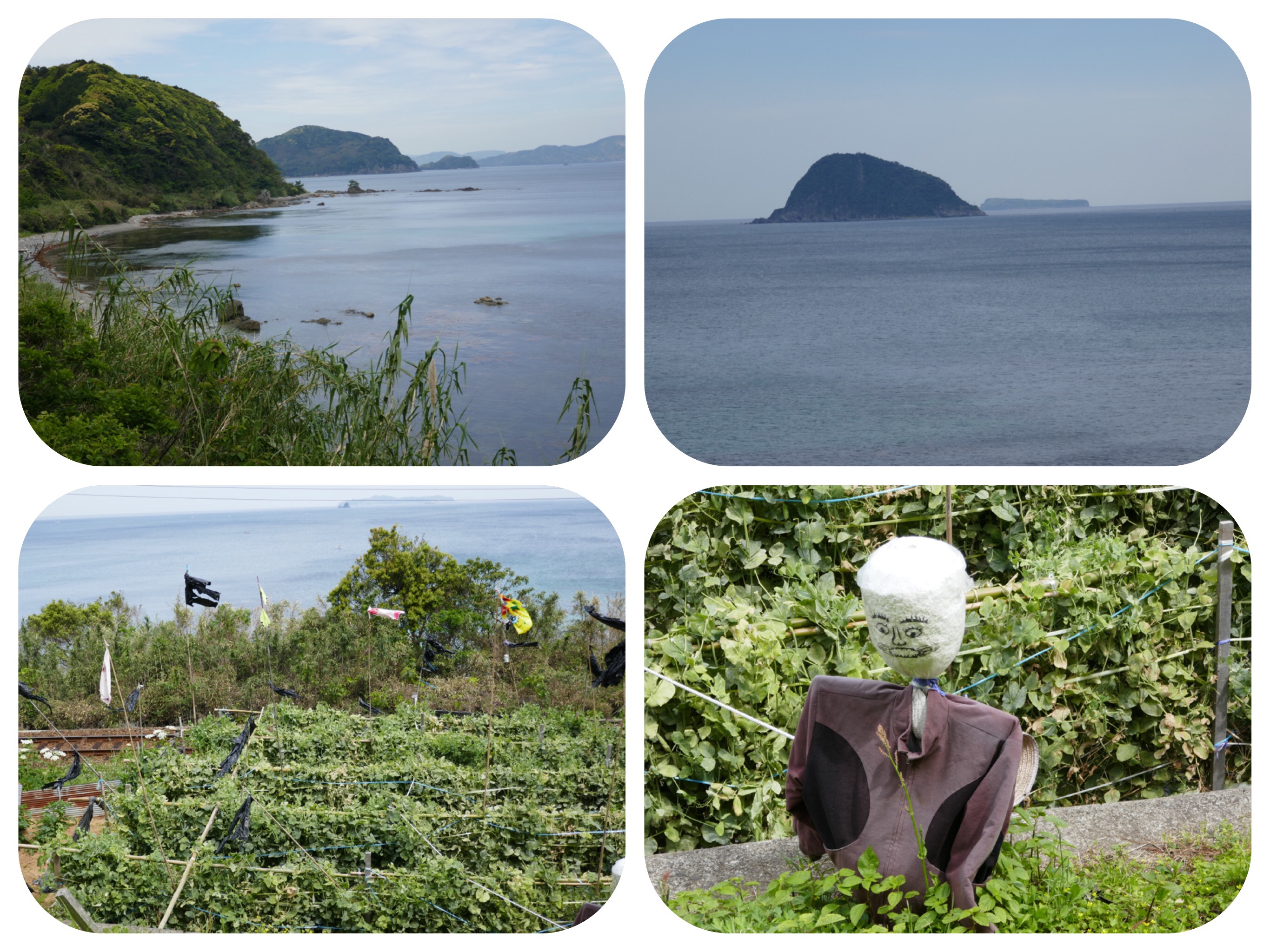 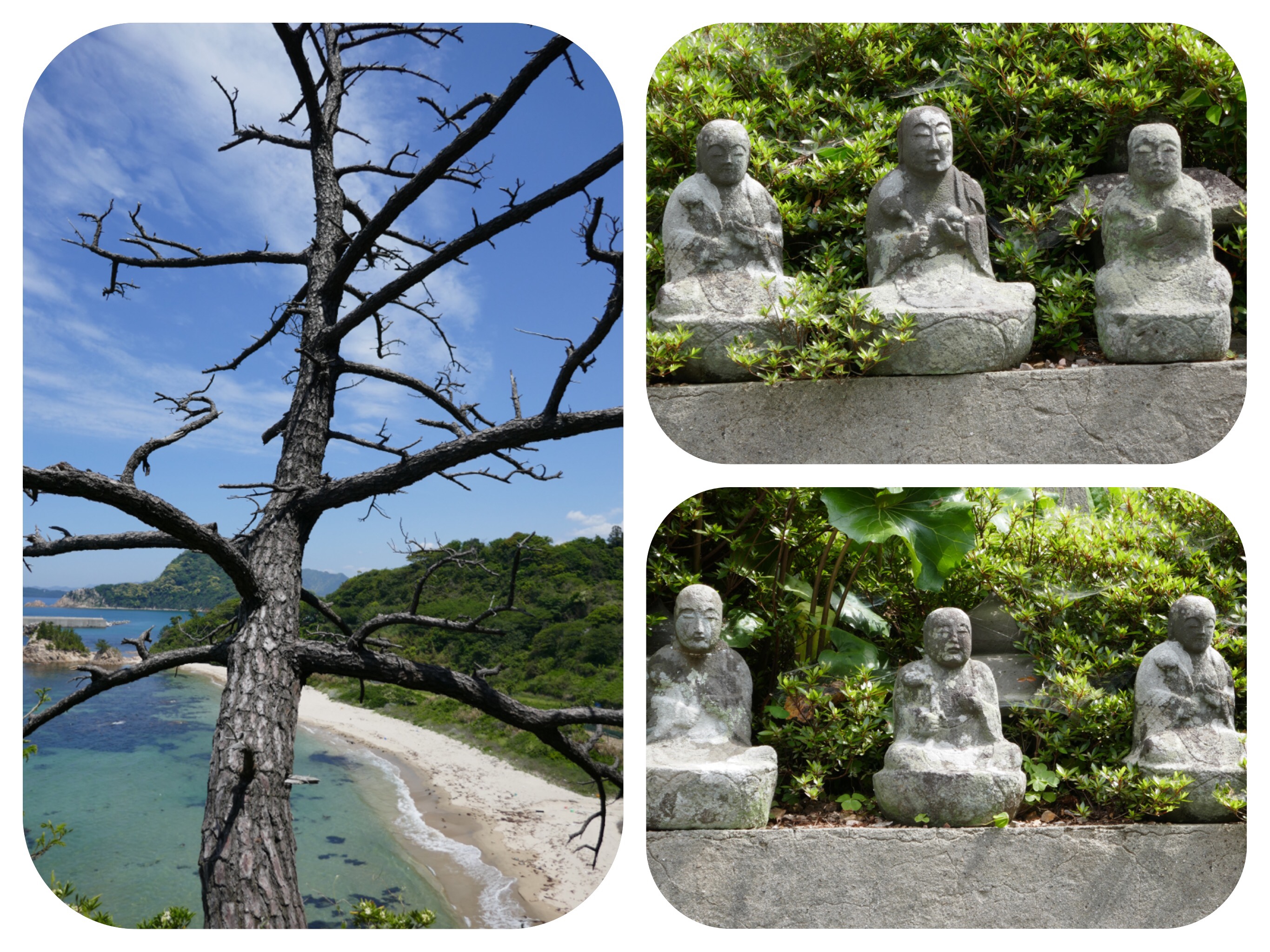 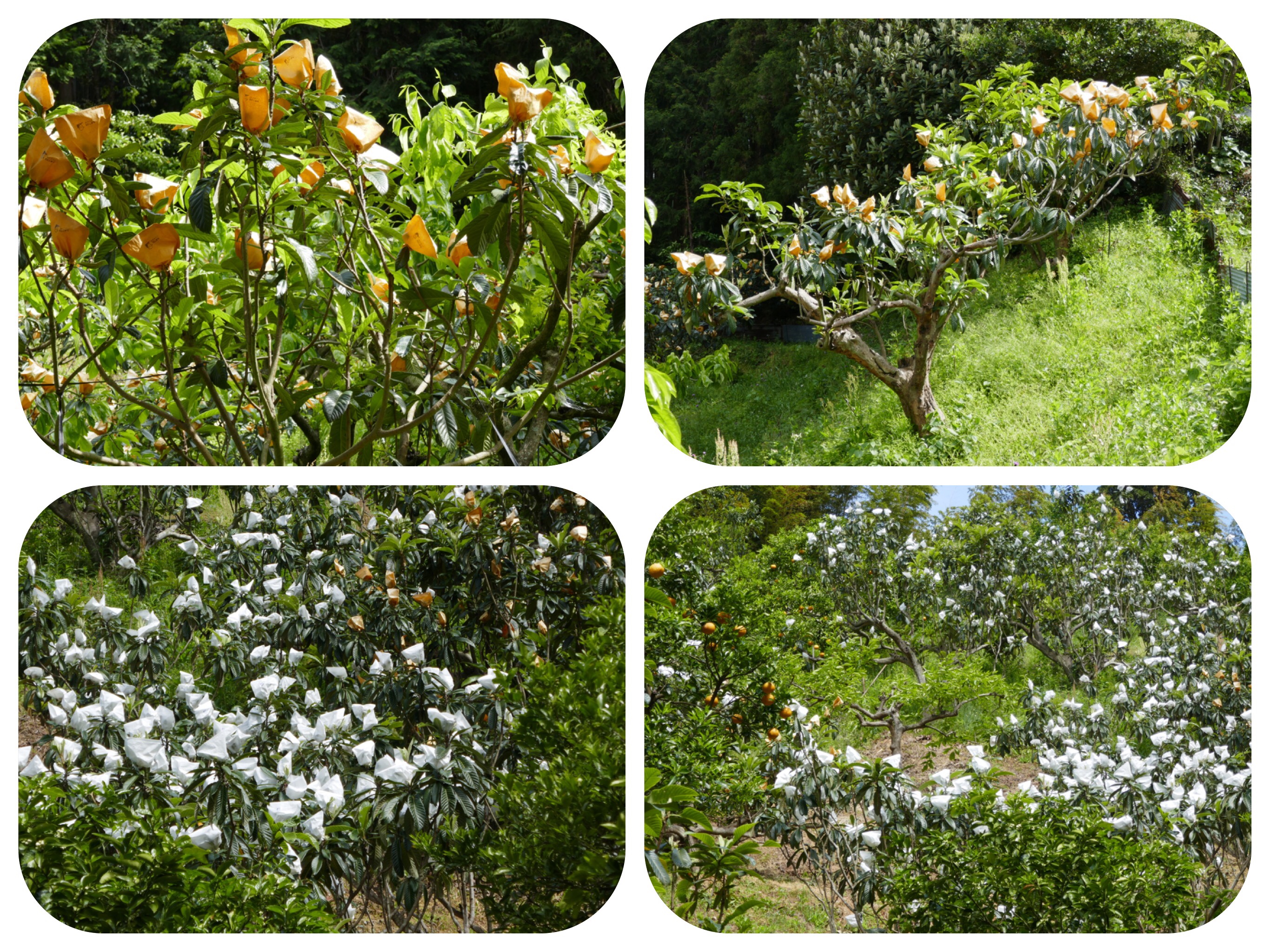 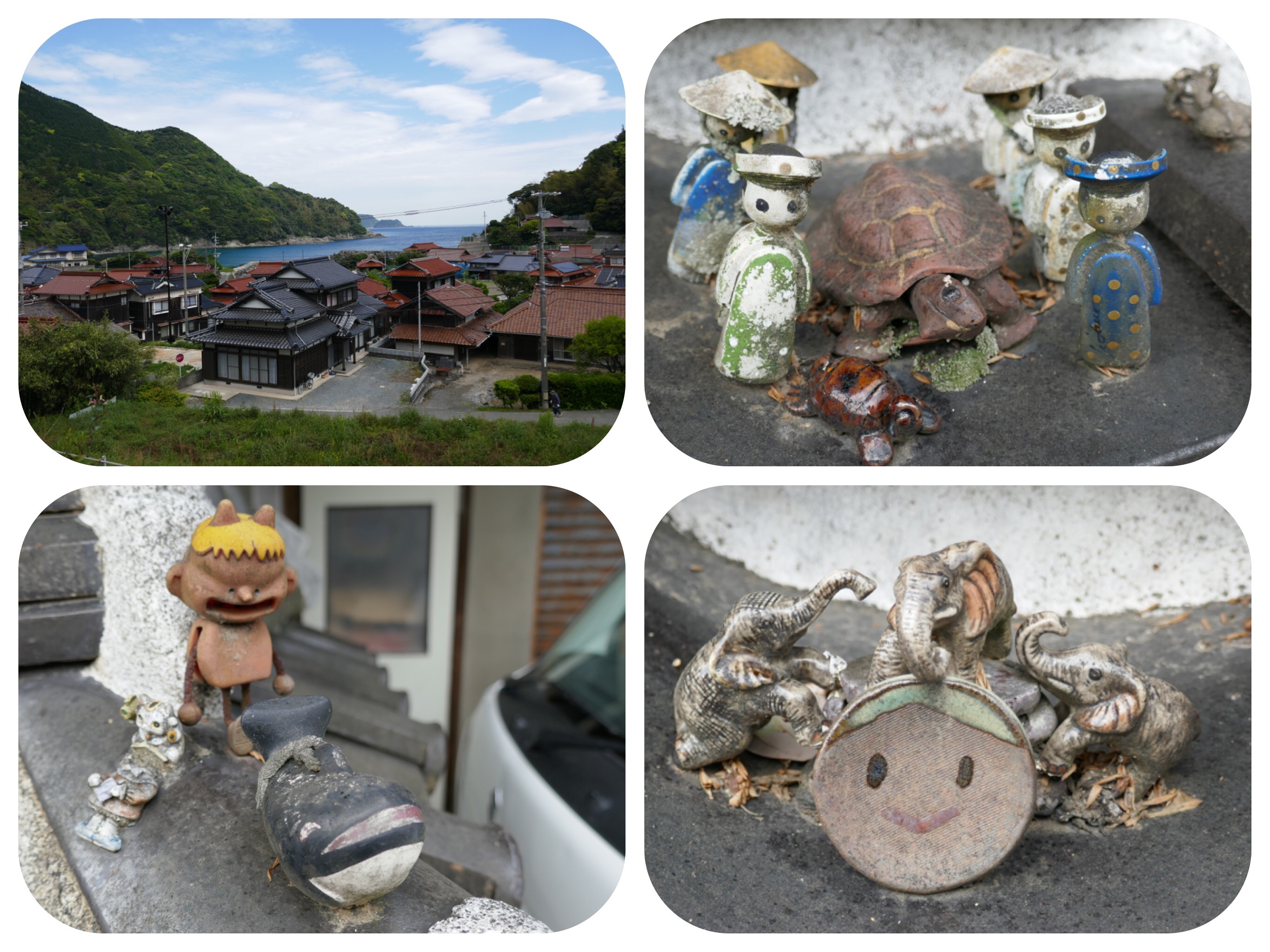 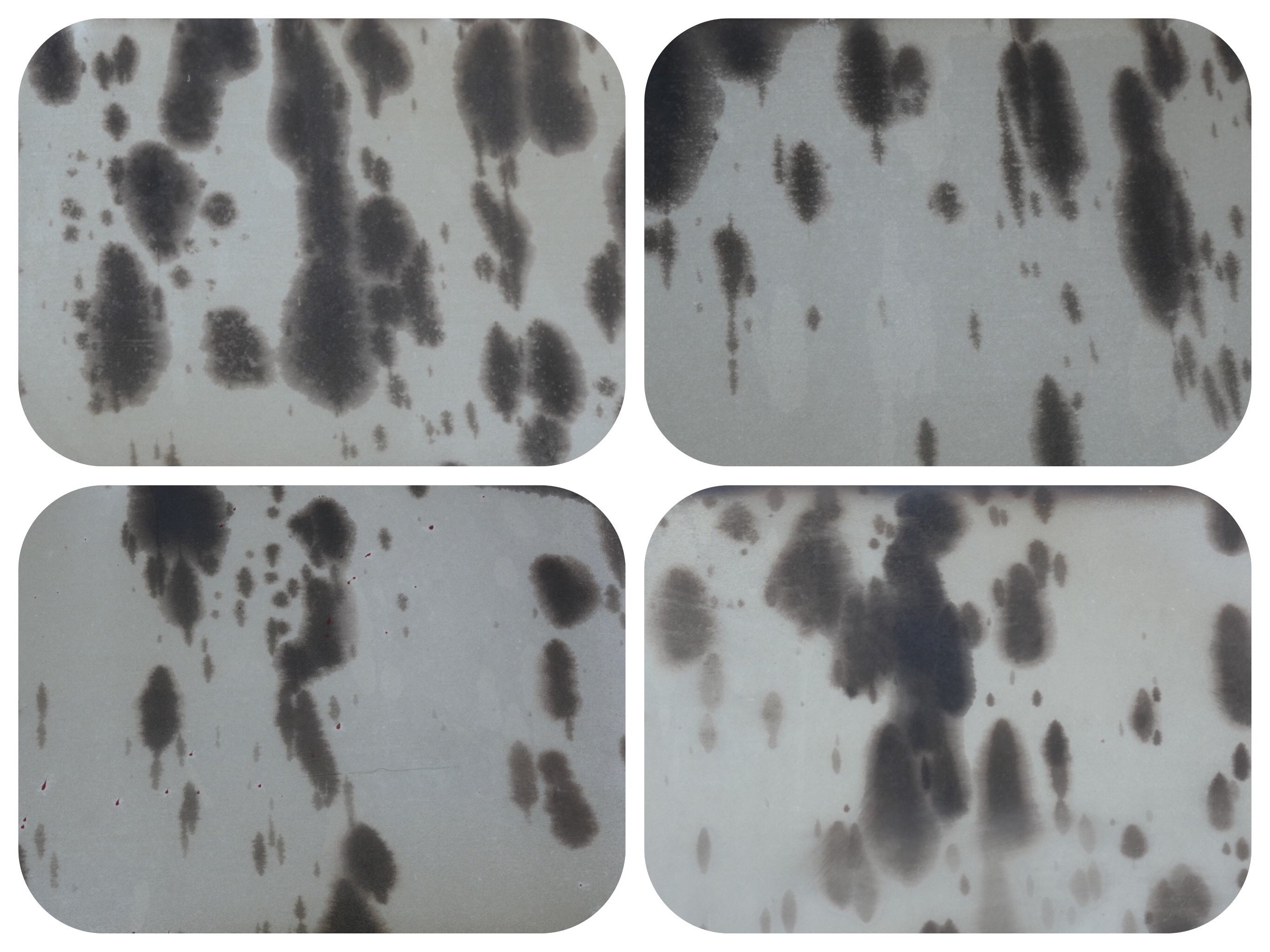 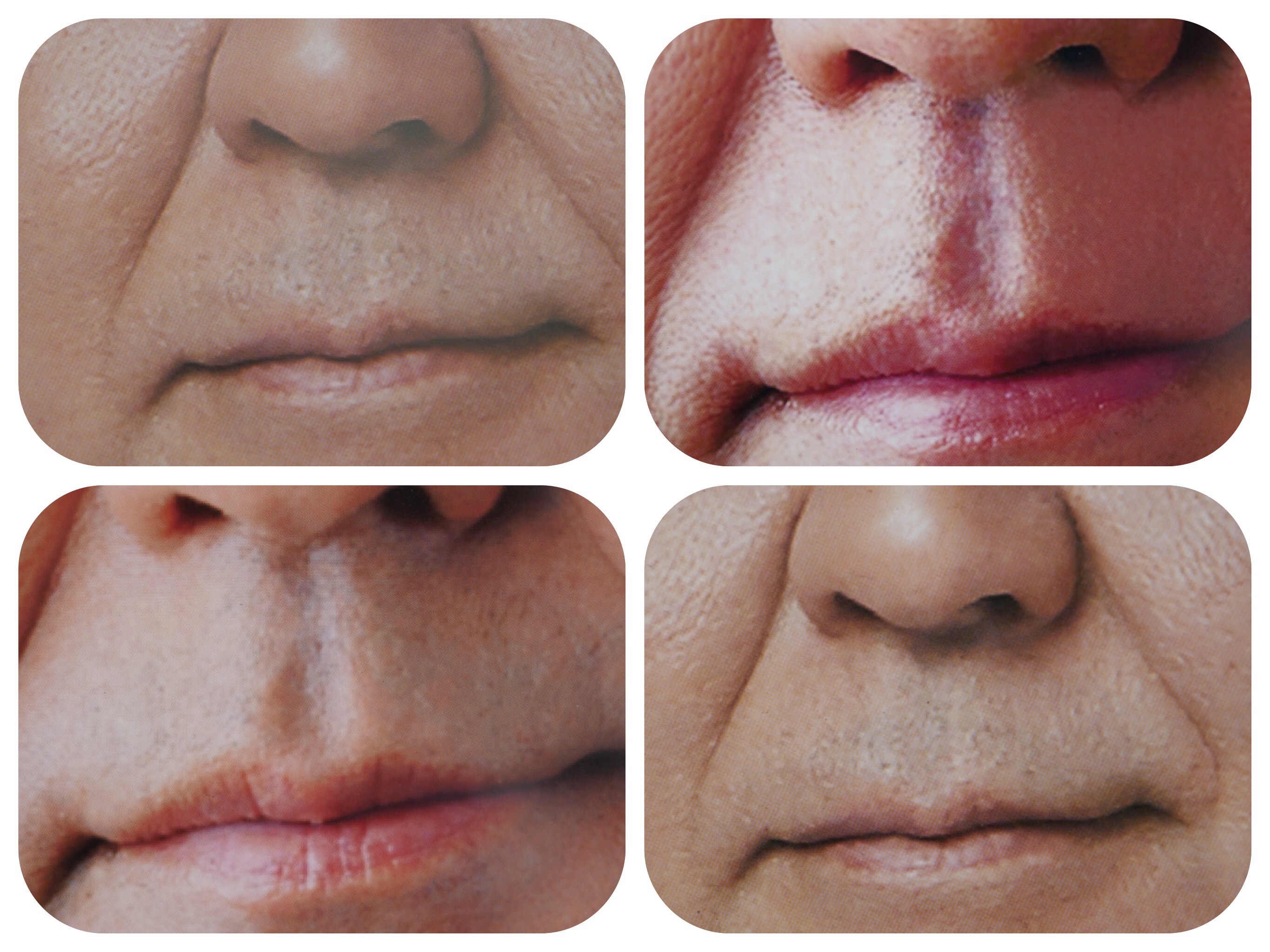 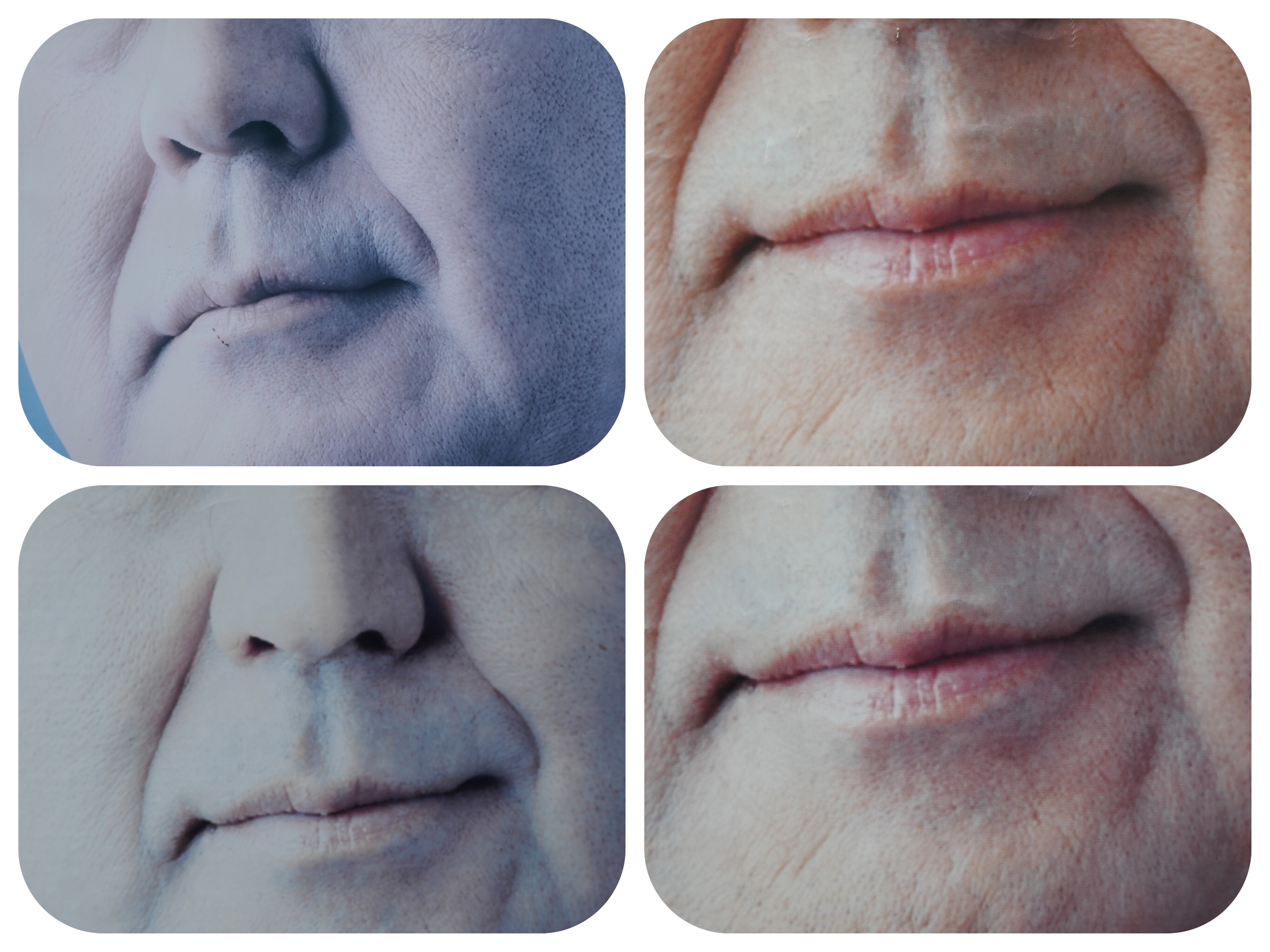 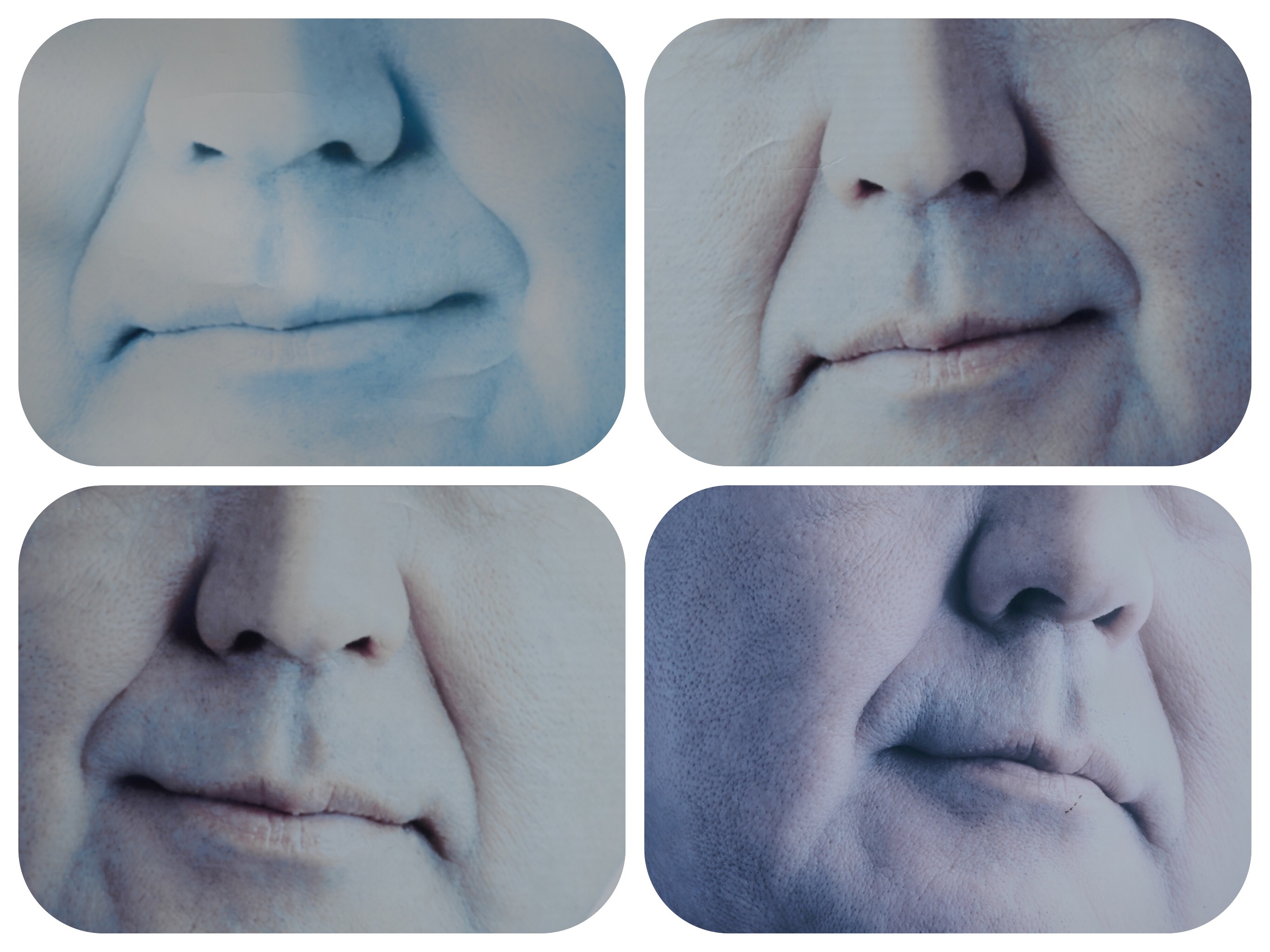 Back home in Colorado, when we were planning the route of this pilgrimage, we saw that it often passed through areas that had no accommodations.

We planned to book a few nights’ stay in a place, and walk forwards along the route, and then return to our hotel or guesthouse in the evening.

In other words, we planned to rely on the train to provide us with transportation at the end of a walking day, and the next day to take us back to the same starting point.

In general, trains in Japan are very reliable. In this rural stretch of the country, the train is a single car, a slow thing, that comes once in the morning, once in the afternoon and once in the evening, making it easy to rely on the train for the commutes to our lodging.

But we have never experienced before a case in which the train line was closed altogether.
In this case, the train ran once in the morning and then it closed for the day, for three days.
The announcement said that you should take the bus instead.

This morning, we checked out of our hotel in Yumoto Onsen, and caught the only morning train leaving that day towards Hagi.
We got off the train where we had stopped walking the day before.
I think nobody, including the friendly conductor who earlier had given us commemorative stickers of JR trains, understood why we were getting off in the middle of nowhere, at a train station that is just a rusting iron and concrete slab in the middle of an empty field.

We began walking along the northern coast, going east.
It was not a sea level costal walk.
Our narrow road meandered through the hills, overlooking the rocky coast below.

There were almost no cars on the road all day.
The sea views were stunning and there were no factories, no car dealerships, no gas stations, no convenience stores, no restaurants, no shops of any kind, just the beautiful blue sea, the lush mountains, the train line that we crossed many times, and some scenic fishing villages and farmland.

We walked to the sounds of birds, the running creek water, and the waves of the sea.
The northern coast of the Chūgoku region is much less industrialized than the southern coast.

The air was balmy and warm, and we could see a few free divers in wetsuits picking up Uni, or sea urchin, that love to sun themselves in the shallow rocky sea.

Soon our beautiful walk took us to a few villages with orchards.
The trees were loquats, and the loquat fruit were covered in paper bags, and the trees in a netting, to protect them from the birds.

Then we heard the scary air guns, loud shooting that is done every minute or two, to scare the birds away from the loquat trees.
We were also scared by the booming, and tried to hurry out of this area.

We stopped in a shaded forest to rest and eat the two grapefruits we were carrying with us.
The air gun shooting to scare the birds really disrupted the harmony of the place.
We talked about how the shooting would bother us, if we lived here.
As pilgrims, we were just passing through, and we could see that the crows were not as scared of the sounds of the shooting as we were.

All day long, the scent of the air was so fragrant, I often stopped to breathe it in.
It was a mixture of Jasmine, honeysuckle, wild roses, the flowering blooms of Mikan oranges and grapefruit.
It was a wonderfully intoxicating, sweet smell.

In some places, the rocky beaches were full of debris that had washed onshore.
There was lots of plastic, styrofoam, fishing buoys, fishing ropes, and all sorts of other crap.

We emerged from the mountains in a small, quiet village, located on the northwestern side of the town of Hagi.

The area is called Tamae, and it is home to Kannon-in, temple #21 on our pilgrimage.

We still have not yet visited temple #20, also located in Hagi, but Kannon-in temple, #21, is located right on our walking path, at our entrance to Hagi.

Kannon-in has been called “The Tamae Kannon,” and has been revered as a temple guarding the sea and the fishermen venturing out into the sea.

It is said that in the final years of the Edo Period, the scholars used the temple frequently as a meeting place, to exchange heated arguments about the “Bakumatsu” (between 1853 and 1867), when Japan ended its isolationist foreign policy and changed from the feudal Tokugawa Shogunate to the pre-modern empire of the Meji Government.

The major ideological-political divide during this period called Bakumatsu, was between the pro-imperial nationalists, and the Shogunate forces, which included the elite Samurai swordsmen.

The temple stands on a hill, overlooking a basin, surrounded by mountains on three sides, and the lower part of the Abu River and the sea.
It was completed in 1604.

Hagi is a castle town, and the temple overlooks the mountain that has the remains of the castle ruins.
From the main hall, you can see the open waters of the Sea of ​​Japan.

A friendly young man manning the temple’s office welcomed us in.
He was a charming young man, easy to laugh and with a cheerful heart. He proudly told us that his temple was one of the few with an ocean view.
He couldn’t believe we were walking the pilgrimage, and offered to take us in his car to Daishoin, temple #20, which he said is just 10 minutes away by car.

He refused to accept money for stamping our book and scroll, but seeing that the temple does not get many visitors, I insisted.
After all, the fees are a source of revenues for these old temples, that are always in need of maintenance and upkeep.

We chanted the Heart Sutra, and lit three sticks of incense.
The young priest was impressed and told us that we had chanted it very, very well.

Instead of going to our hotel, we walked to a cafe to have lunch.
Our backpacks were heavy, but we thought it was better than doing a detour to the hotel and missing the cafes, which close by 4 PM.

We found an open cafe and ordered cheese toast and Earl Grey tea.
The cheese toast came with sliced bananas and marshmallows on the melted cheese.
Jules looked at the toast with confusion and almost disappointment, but the odd combination still tasted good, so we left nothing on our plates.

Hagi is a town rich in Edo period history, with many restored period houses that you can visit.
The streets are wide and many houses have beautiful mudbrick walls dating from the Samurai era.
The old residences include houses of merchants, doctors, politicians and influential families in Hagi.

Our hotel is right on a beautiful stretch of clean beach, and although it does not look like much from the outside, it is a lovely place to stay.

The Onsen hot springs waters are salty- magnesium and mineral rich.
Our Japanese style room is spacious and light-filled.

Our room rate includes dinner and breakfast, served in a separate private room.

Today’s photos are mostly from Jules’s camera and include his ‘Abe’ (the current Japanese prime minister) art project.

Wishing you much love and light and a Happy Mother’s Day!
Tali

Total distance walked on the pilgrimage so far: 687 Kilometers

2 Comments on “Day 34 – The Chūgoku 33 Temple Kannon Pilgrimage, Japan – From Yumoto Onsen to Hagi, and Visiting Kannon-in Temple in Hagi”