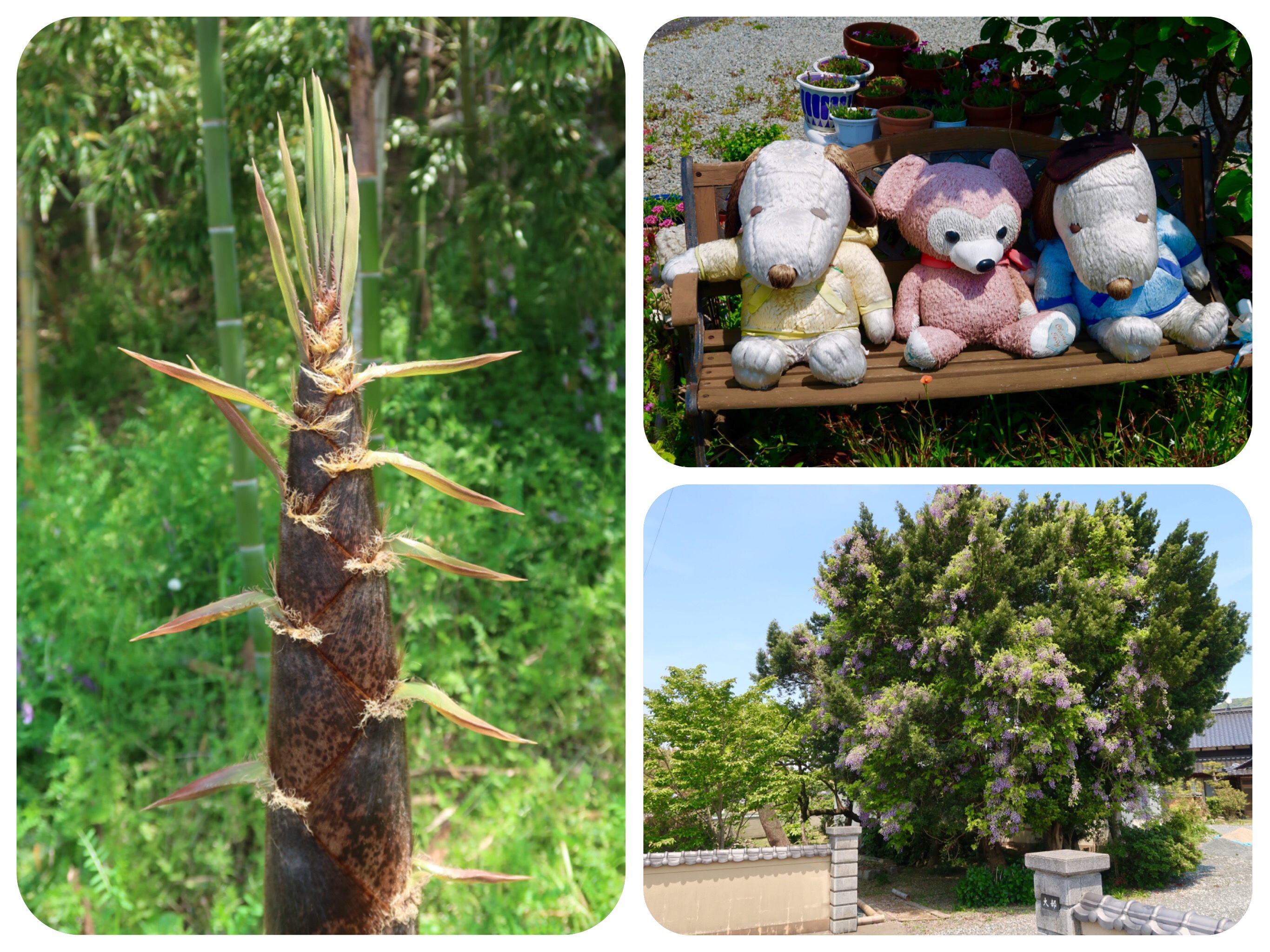 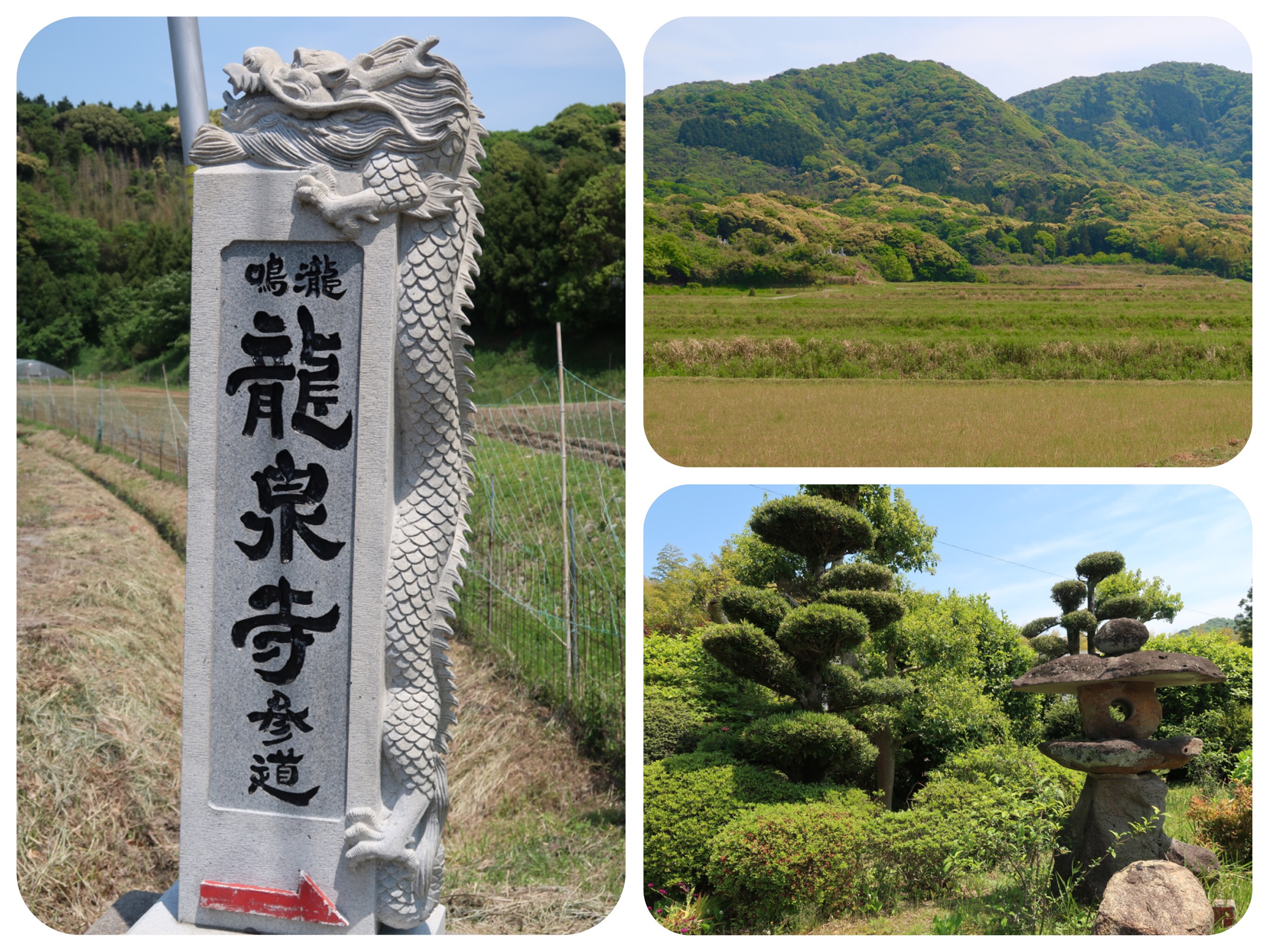 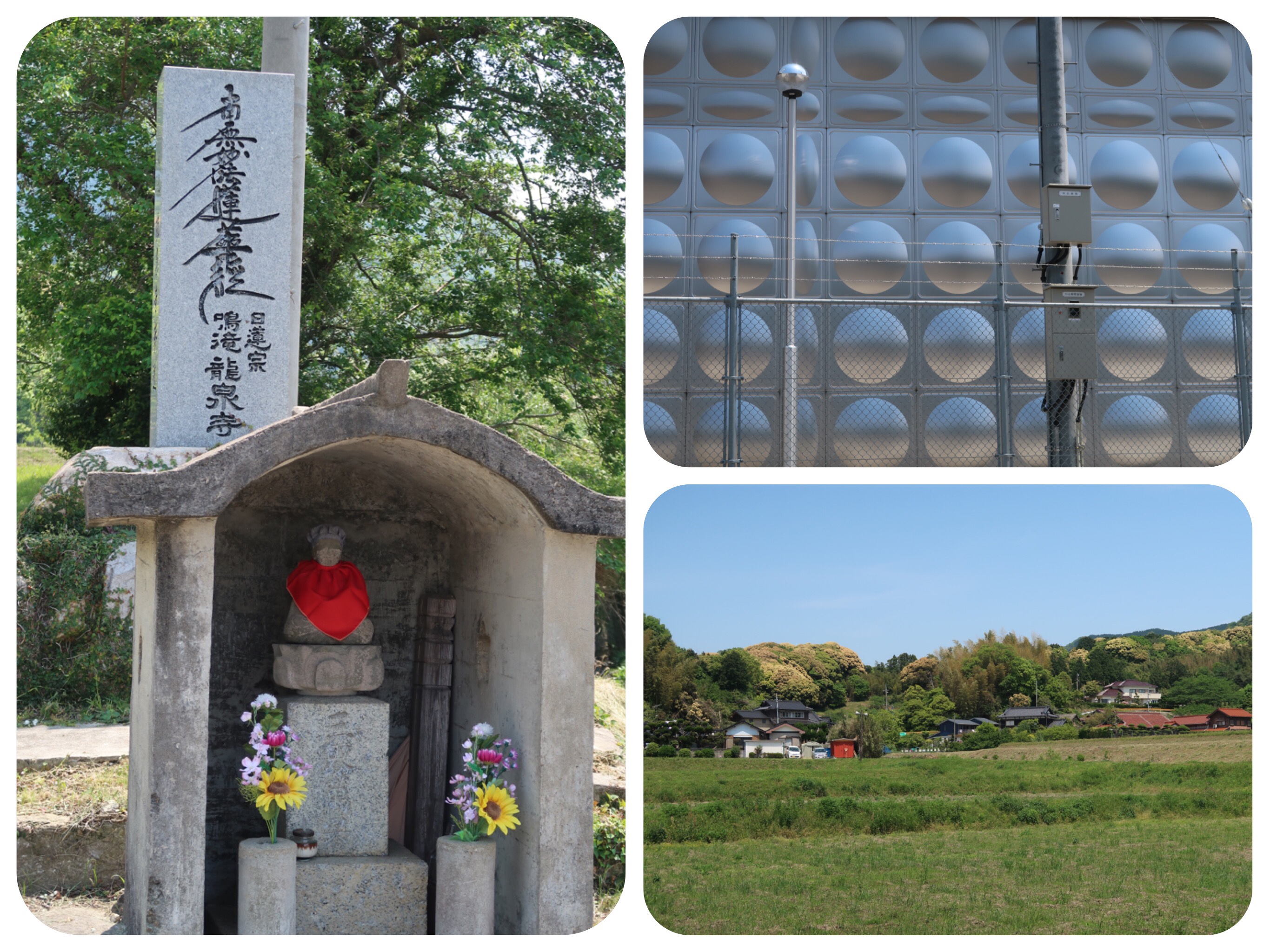 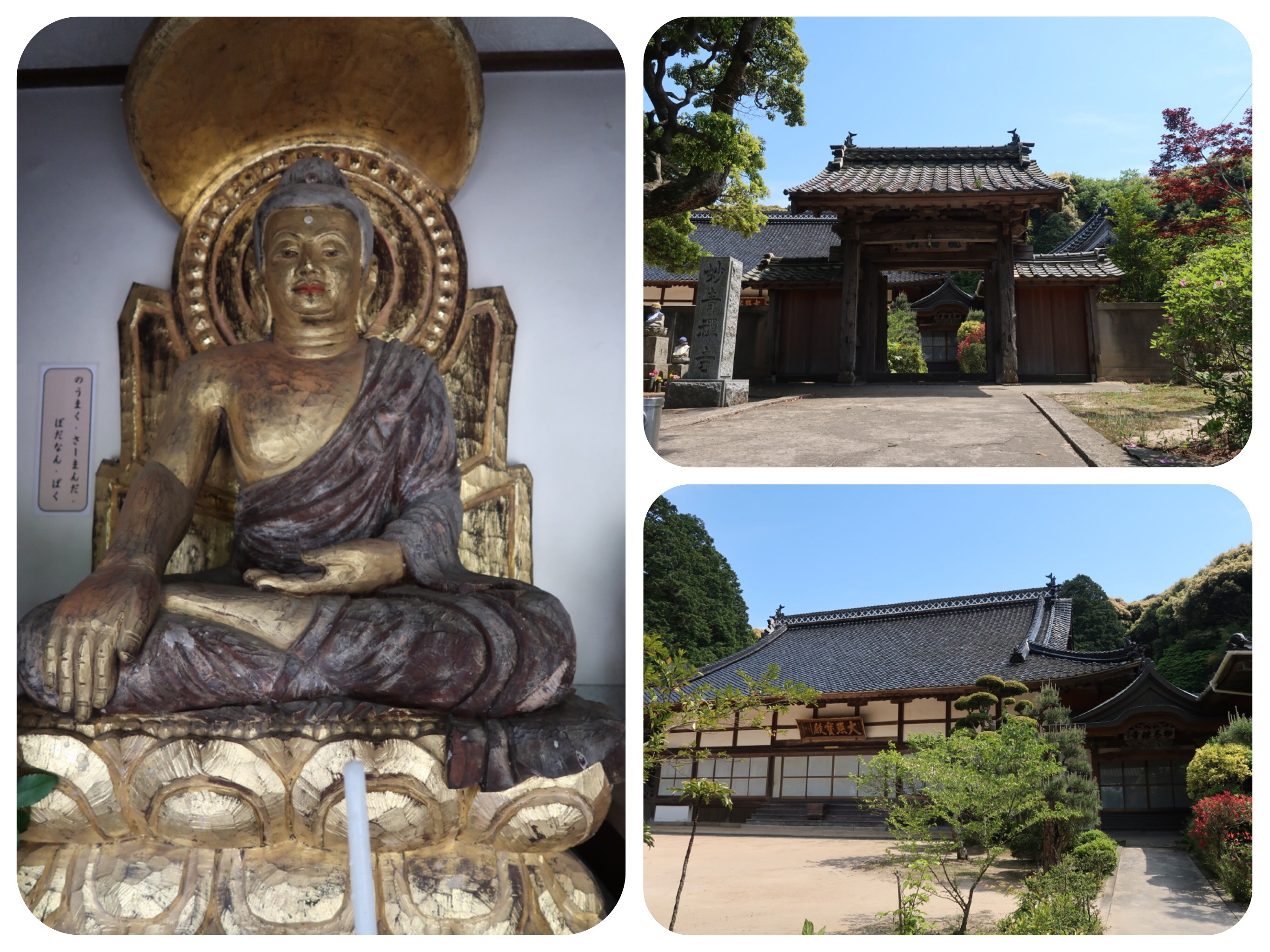 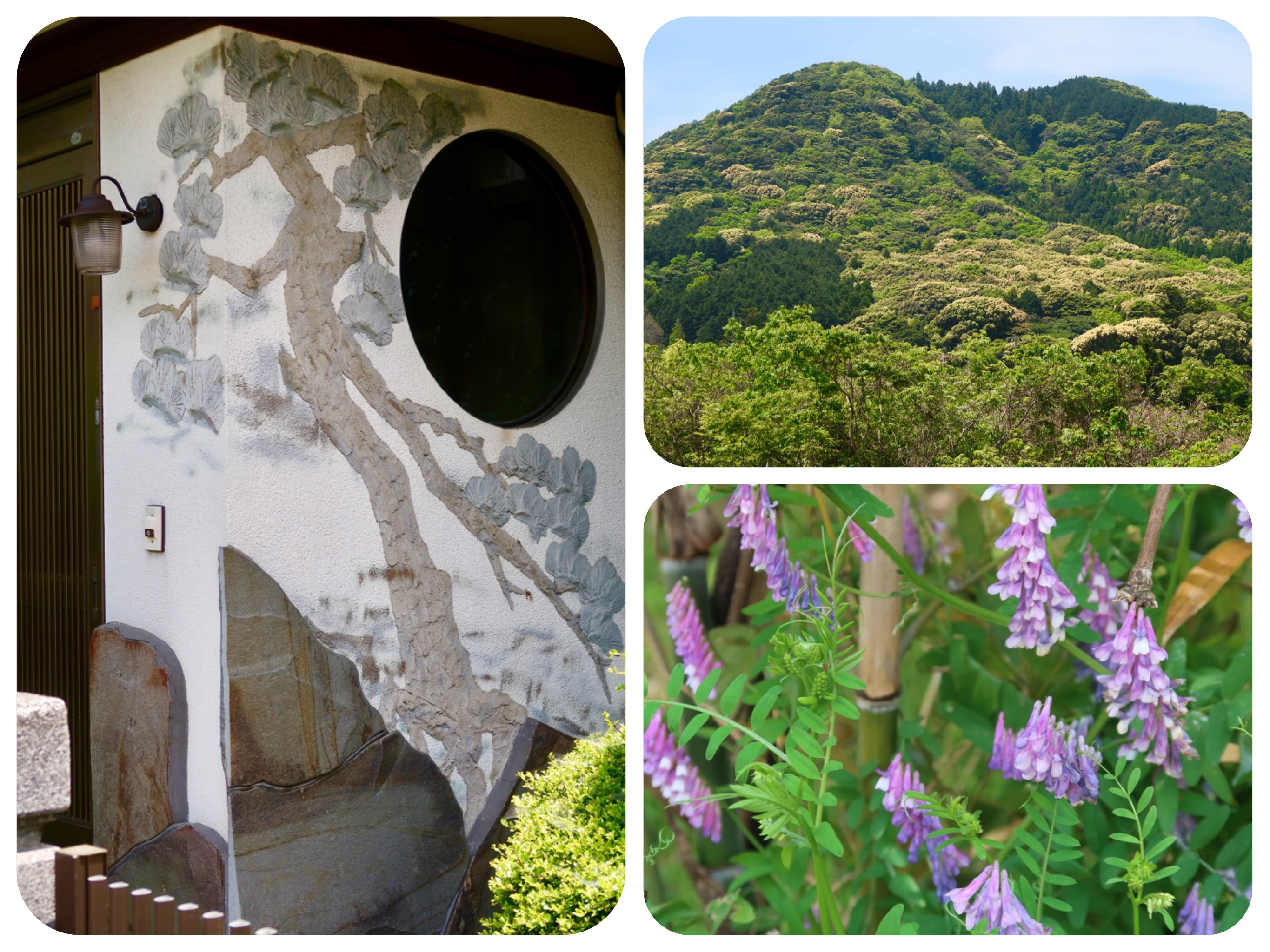 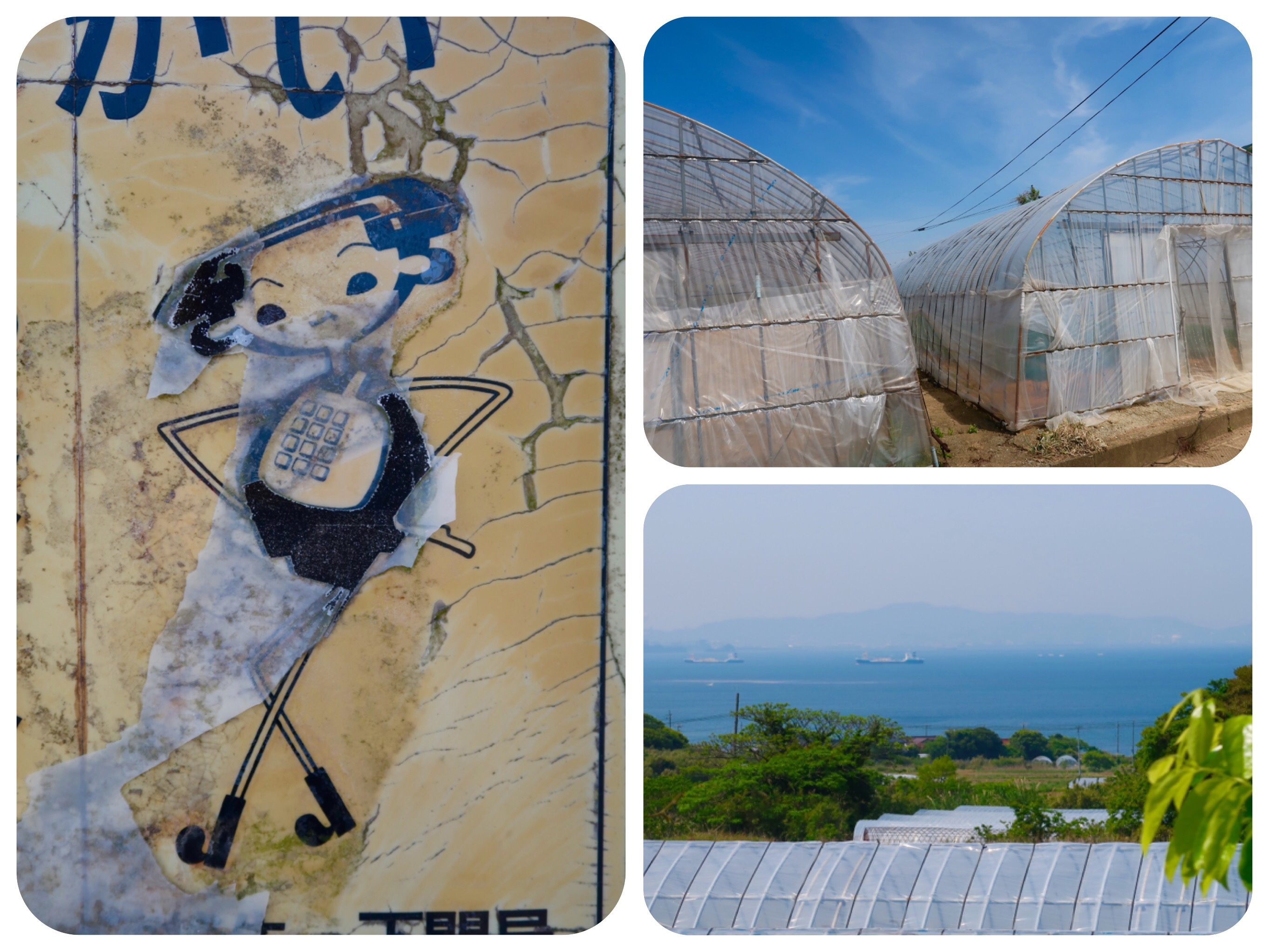 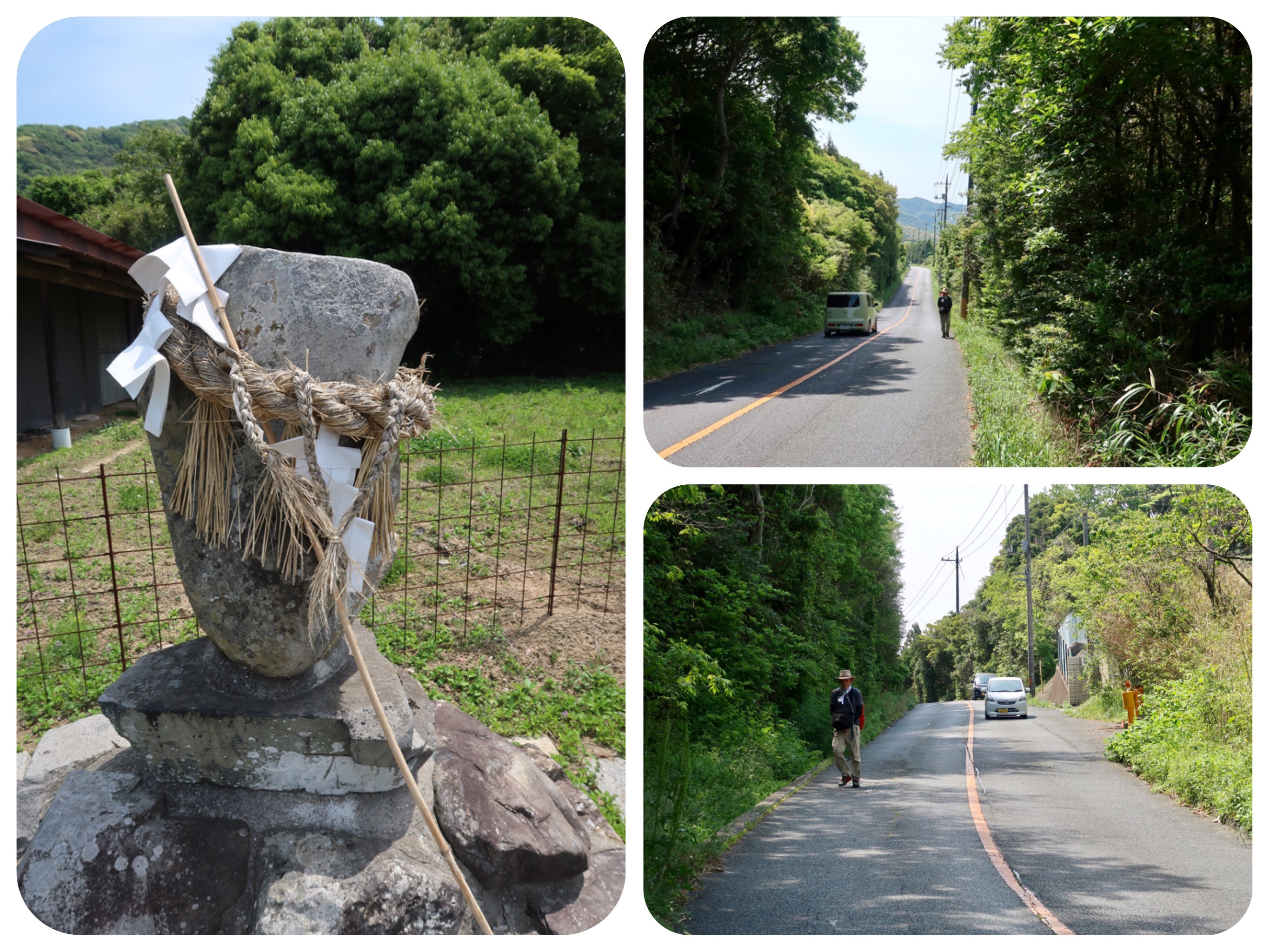 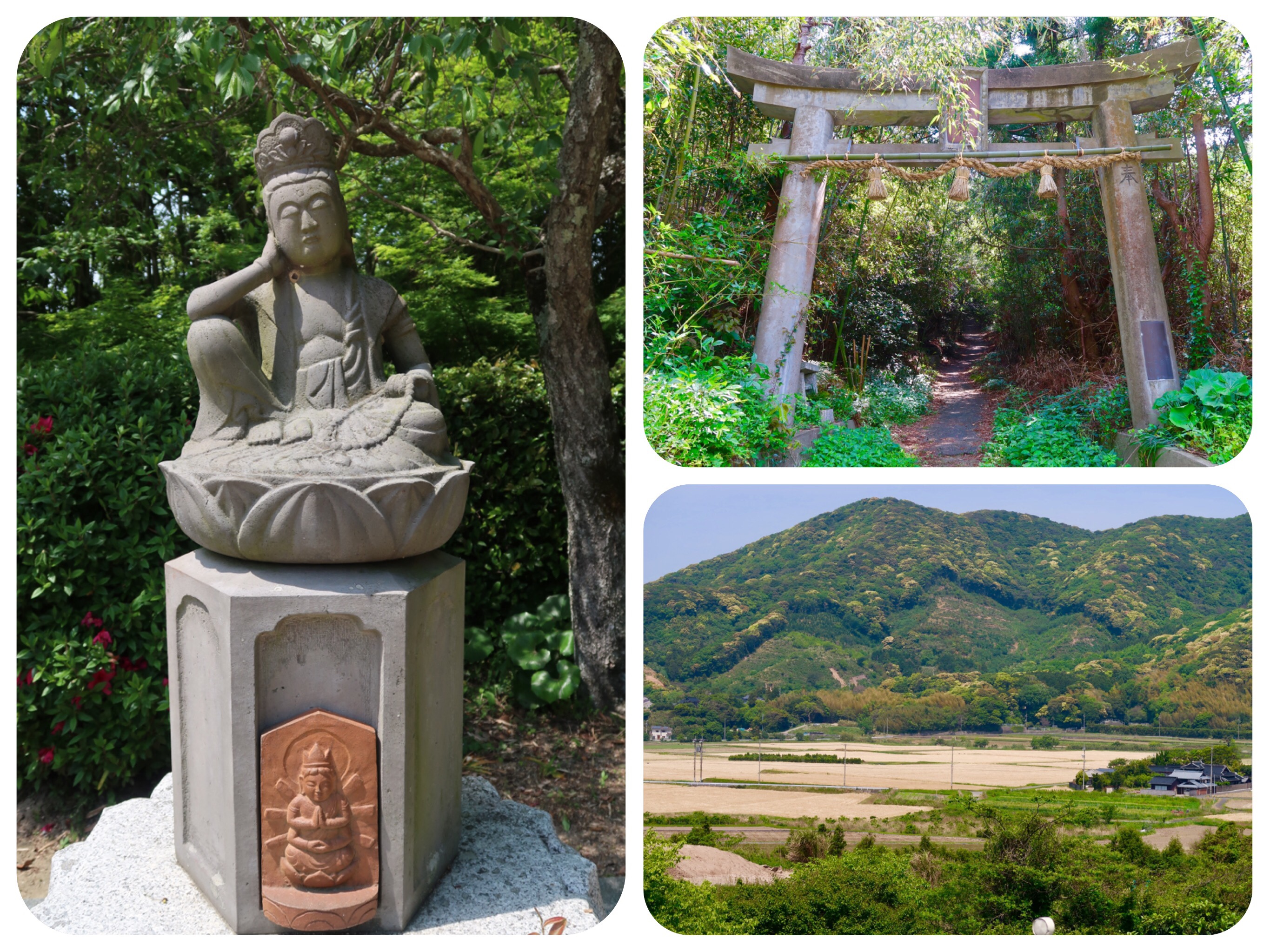 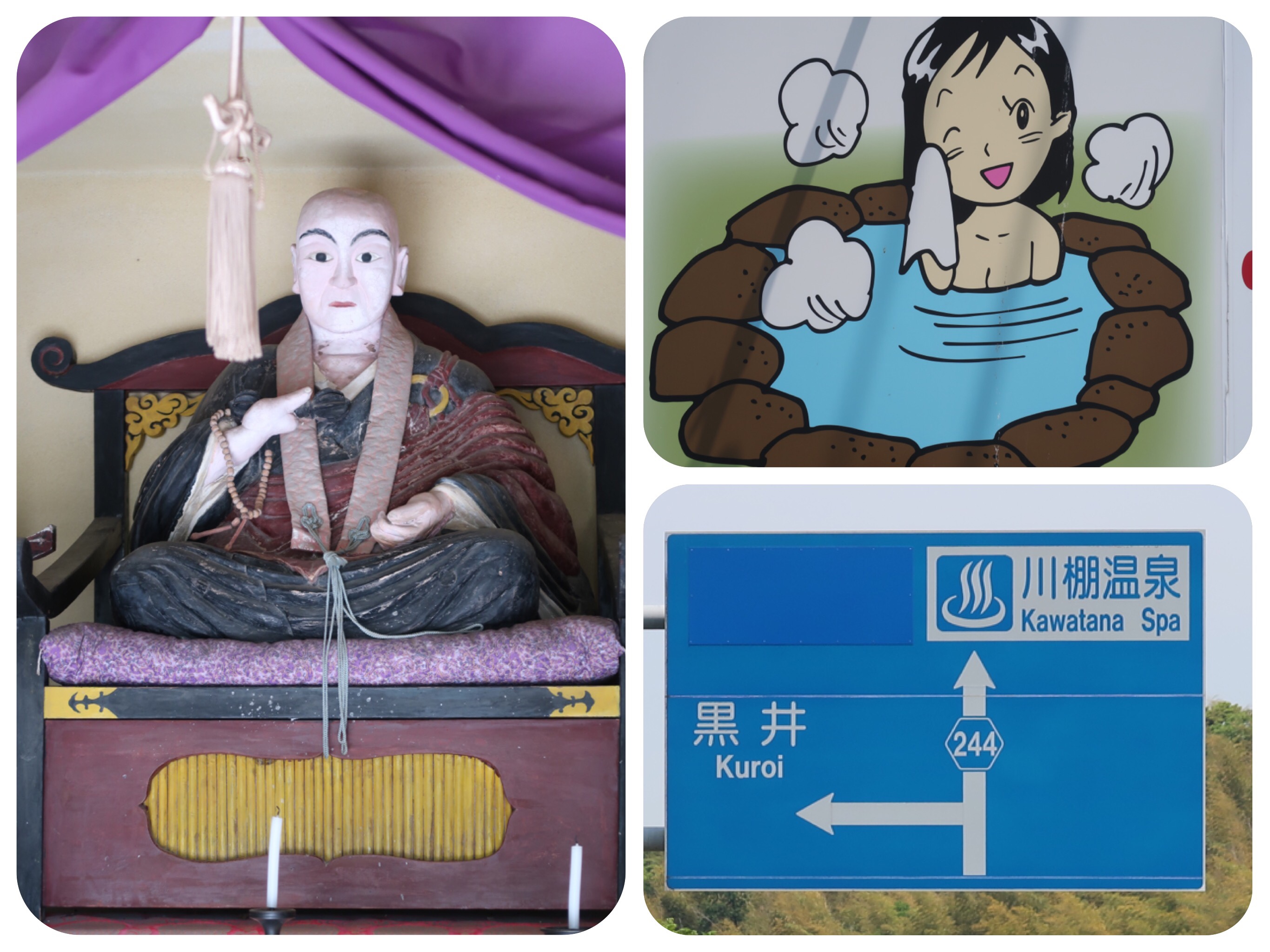 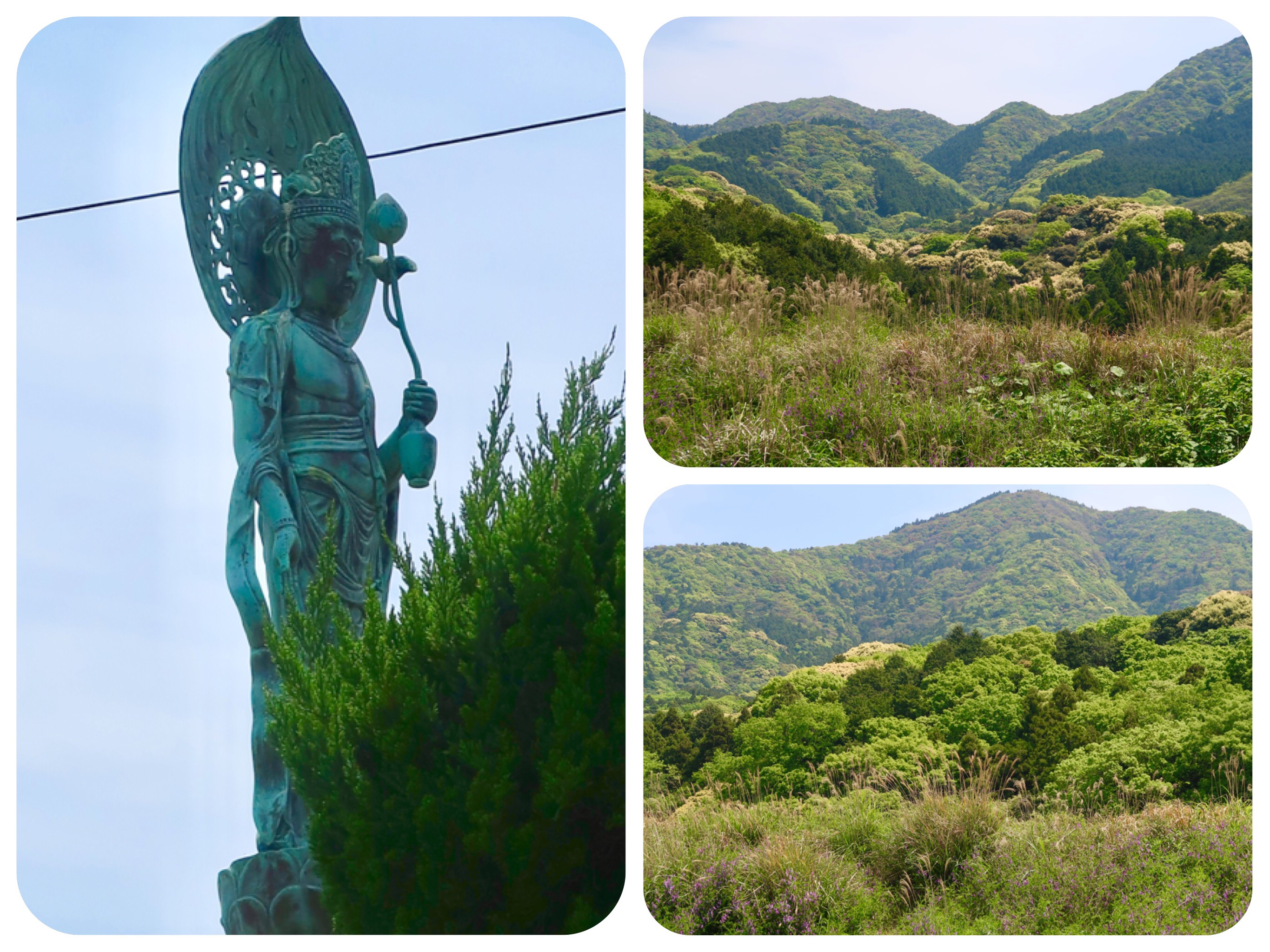 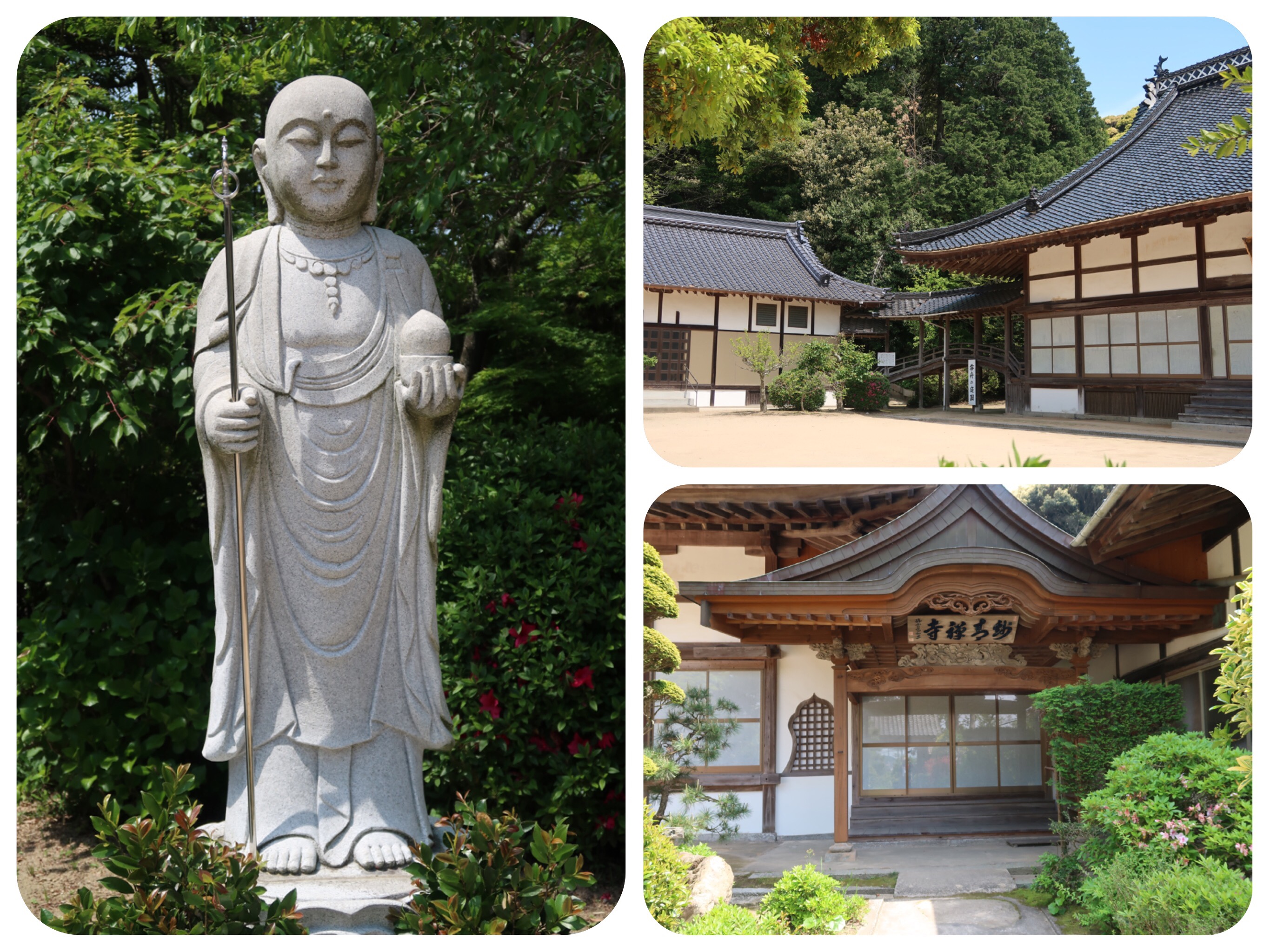 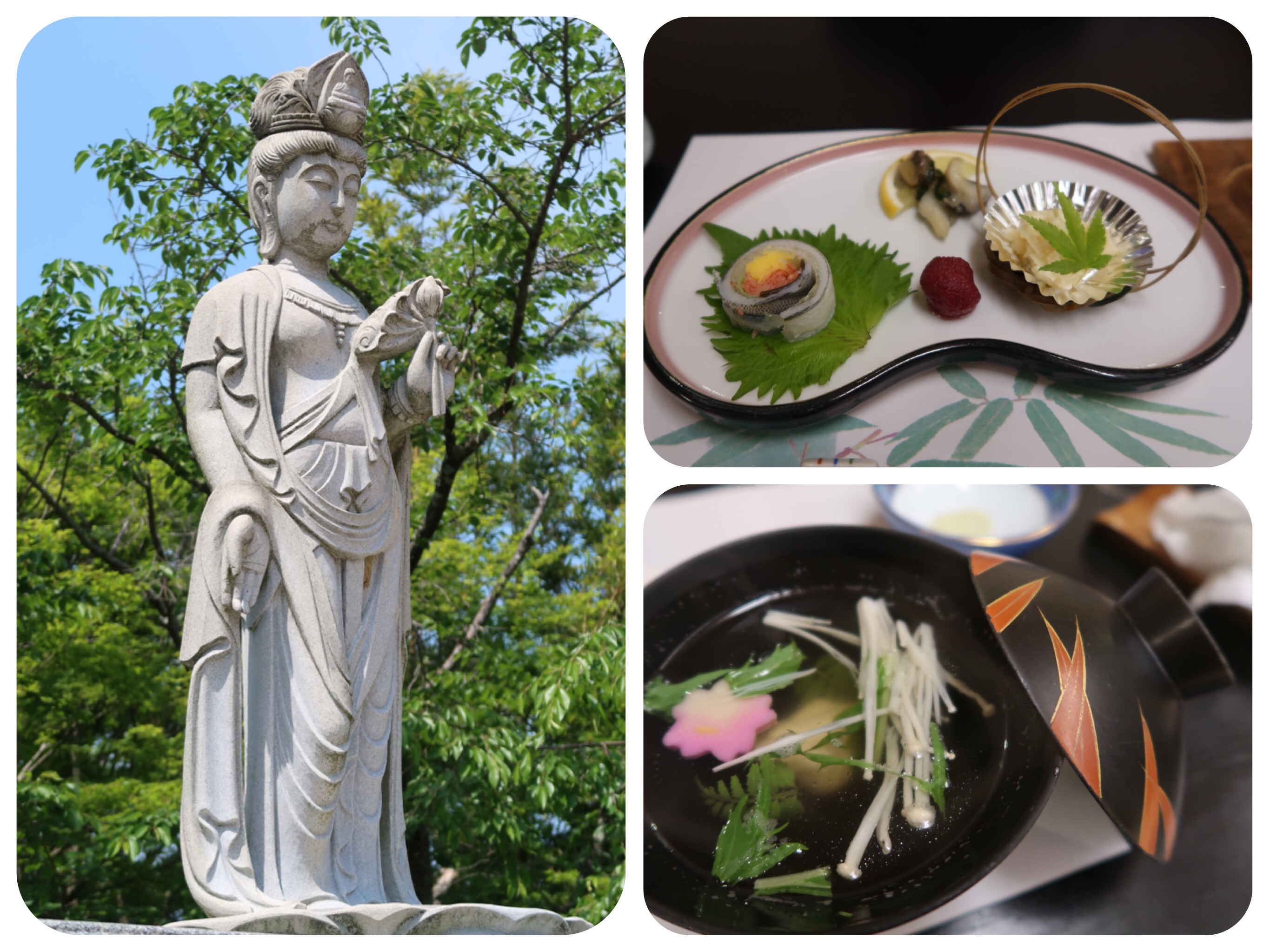 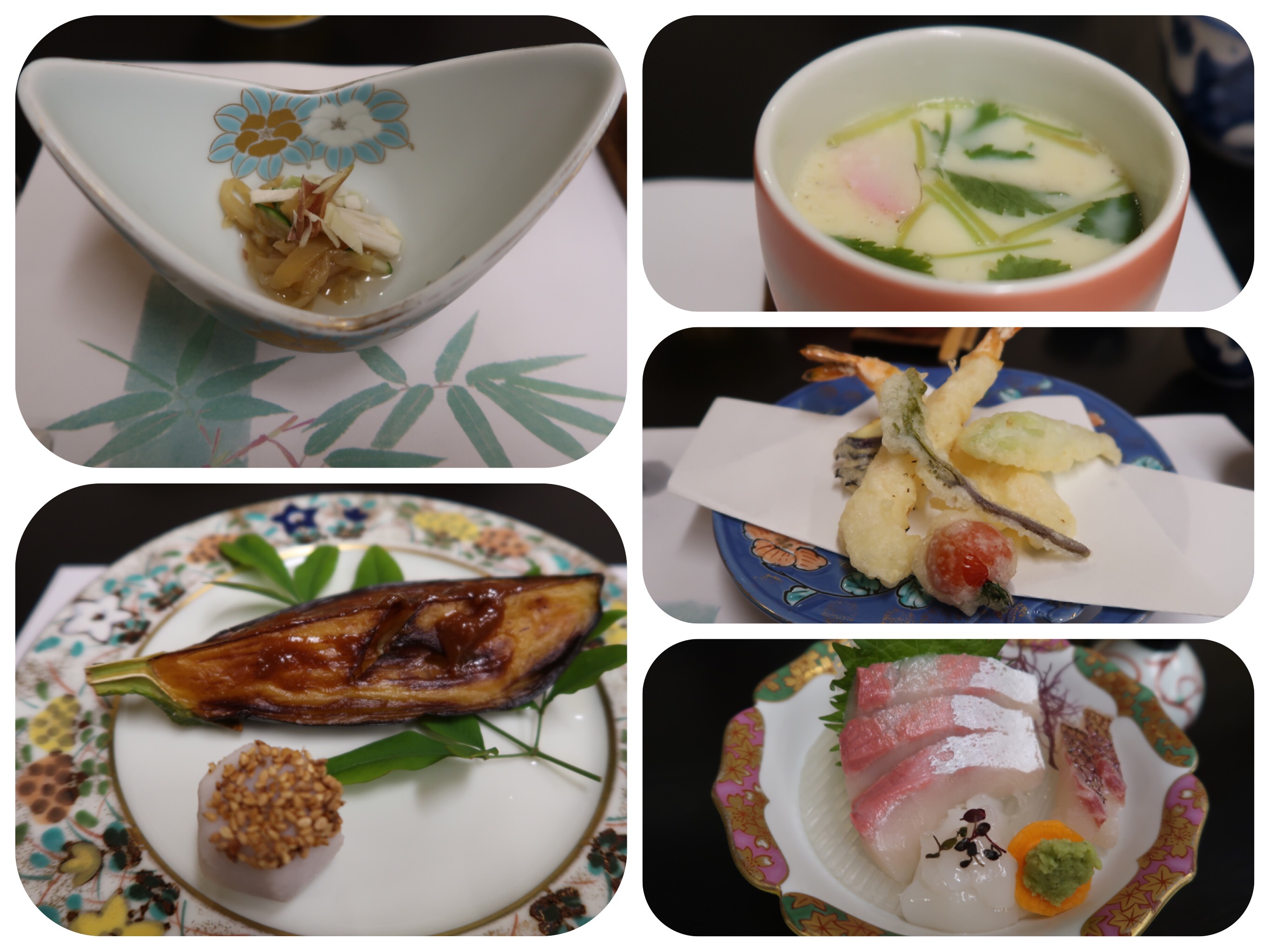 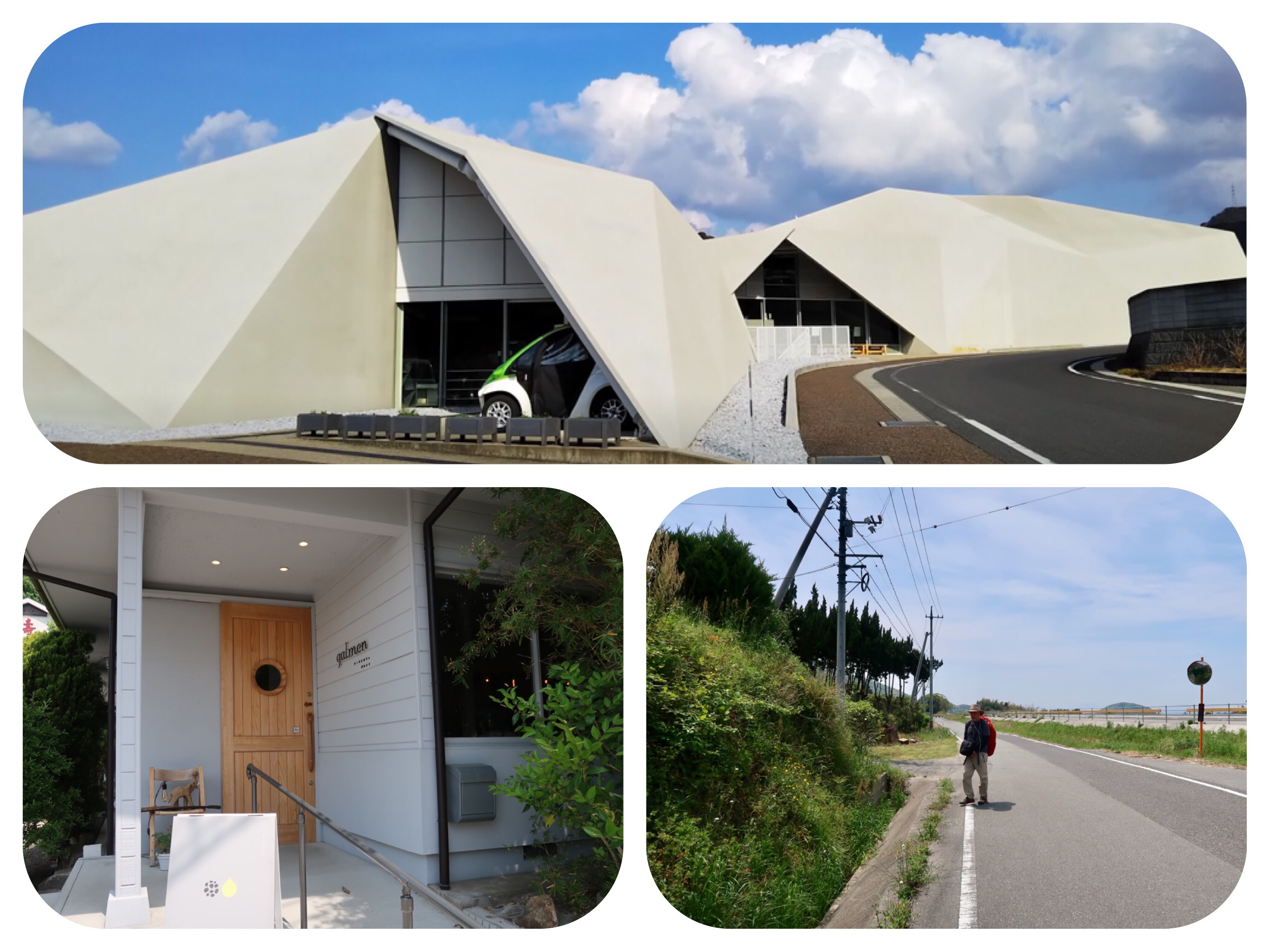 Today was a very hot day.
We did not have long to walk, since we had already covered half the distance the day before.
So this morning, after checking out of our hotel in Shimonoseki, we took the train to Fukue, where we ended our walk yesterday.

There were two ways to get to Kawatana Onsen, the flat road by the sea, and the mountain road.

We started walking on the sea road.
It was busy with traffic, and soon our sidewalks disappeared, so we were walking on the narrow edge of the road.
Instead of continuing on, walking close to the fast cars, I veered into the mountains to walk on the narrow mountain road instead.

Just as we started walking by the farms and greenhouses, a farmer in his truck asked me where we were going to.
I told him we were walking to Kawatana Onsen town.
He said it is a long walk, and that we should take the sea road, which is shorter and flatter.
The mountain road had lots of up and downs, and is also longer.
“Better take the bus.” He said.
I explained that we preferred to walk, and continued on towards the mountain road.

This time, my gamble did not work out well.
The mountain road did indeed climb up and down, but it was not a quiet road.
It was narrow, with speeding cars on both sides, and no sidewalks.

We walked for a few kilometers, trying to squeeze ourselves over to the side of the road.
As we walked on the side of the narrow busy road, some cars gave us a wide space.
Others slowed down and drove very near us, which made sense when they were wedged themselves between us and the oncoming traffic.

But some drivers simply did not give us any room, even though there was no upcoming traffic.

I was getting upset at the drivers who did not give us a bit of room for walking.
In my anger, I felt that there was no reason for them not to drive in the middle, when there were no curves and good visibility to see that there were no oncoming cars.

Very soon I told myself that I really shouldn’t be walking for hours feeling angry at my brothers and sisters in the world.
The reason that they do not drive in the middle, is that some people are so used to following the rules, that they can at times act in a rigid way.

They do not wish to harm us, but they are not able to move to the other lane, because they believe that by following the rules to the T, they will avoid an accident or disaster.
They are unable to see and quickly assess, that there was no danger for them in veering a bit over.

The anger left me, but I still wished that I had taken the sea road.
I am sure that the sidewalk situation would have been better there.

The sun was hot and I was sweating.
There were not many places to stop and rest, until we reached a new road that had sidewalks and a shaded bench by a tiny village.
We drank our water and continued walking.

When we reached Kawatana Onsen, we visited an old temple on a hill called Myoseiji.
Behind it, farther up the hill, was a Shrine.

There are a few traditional Ryokans in the village, and a bigger and very nice hotel.
The community Center is a striking, modern piece of concrete architecture, by a famous Japanese architect called Kengo Kuma.

Kengo Kuma is known for his modern architecture.
He is also a professor in the Department of Architecture at the University of Tokyo, and is also notable for his prolific writing.

It was a big contrast to see the massive concrete triangular shapes in a tiny traditional onsen village.

The day onsen’s parking lots were filled with cars of local people who had come to bathe in the hot springs.

Before making our way to our small guesthouse, we stopped in a modern cafe in the village called “Galmen.”
When we entered, the place was packed with people, but the Japanese are very considerate people, and people shifted around to give us room to sit at the bar.
The air conditioning felt heavenly and the spotless cafe, with its modern design, felt like a sanctuary for road weary travelers like us.

We took off our backpacks and ordered two iced coffees, two fruit tarts, two caramel cookies, two sandwiches and two hot teas.
I felt like a little piggy, especially since I was not even hungry.

It was a big lunch, and we hoped that we would be able to delay our dinner at the guesthouse, as much as they would let us.

The young lady who owns the cafe is an excellent baker.
She also brews each cup of coffee to order and makes and decorates every dish meticulously.

A stream of people came to her cafe while we were there, which meant that she had a long line of people at the counter waiting to place their orders.

It was a relaxing and refreshing break to sit in her cool cafe, decorated with nice art and crafts.

Our guesthouse is very charming, with traditional Tatami mat rooms.
We asked the owner for a late dinner, and he told us that seven PM is the latest time available.
Then we asked if they have a washing machine to do our laundry.
He said that they do not, but that he will make an exception for us and that they will do our laundry for us for free.

We quickly took off all our sweaty clothes and socks, dressed in our Yukatas and went to shower and bathe in the hot springs.
The hot springs bath was small but very nice, with mineral waters that had a touch of saltiness to them.
I enjoyed soaking alone in the pleasant hot springs, before any other guests arrived.

Dinner was a feast of major proportions, featuring local ingredients and local cuisine.
It was the first time on our pilgrimage that I left half of my food uneaten.
Everything was delicious and well made, but I just could not eat it all.

Total distance walked on the pilgrimage so far: 600 Kilometers

Temple Visited: Myoseiji – not part of our pilgrimage