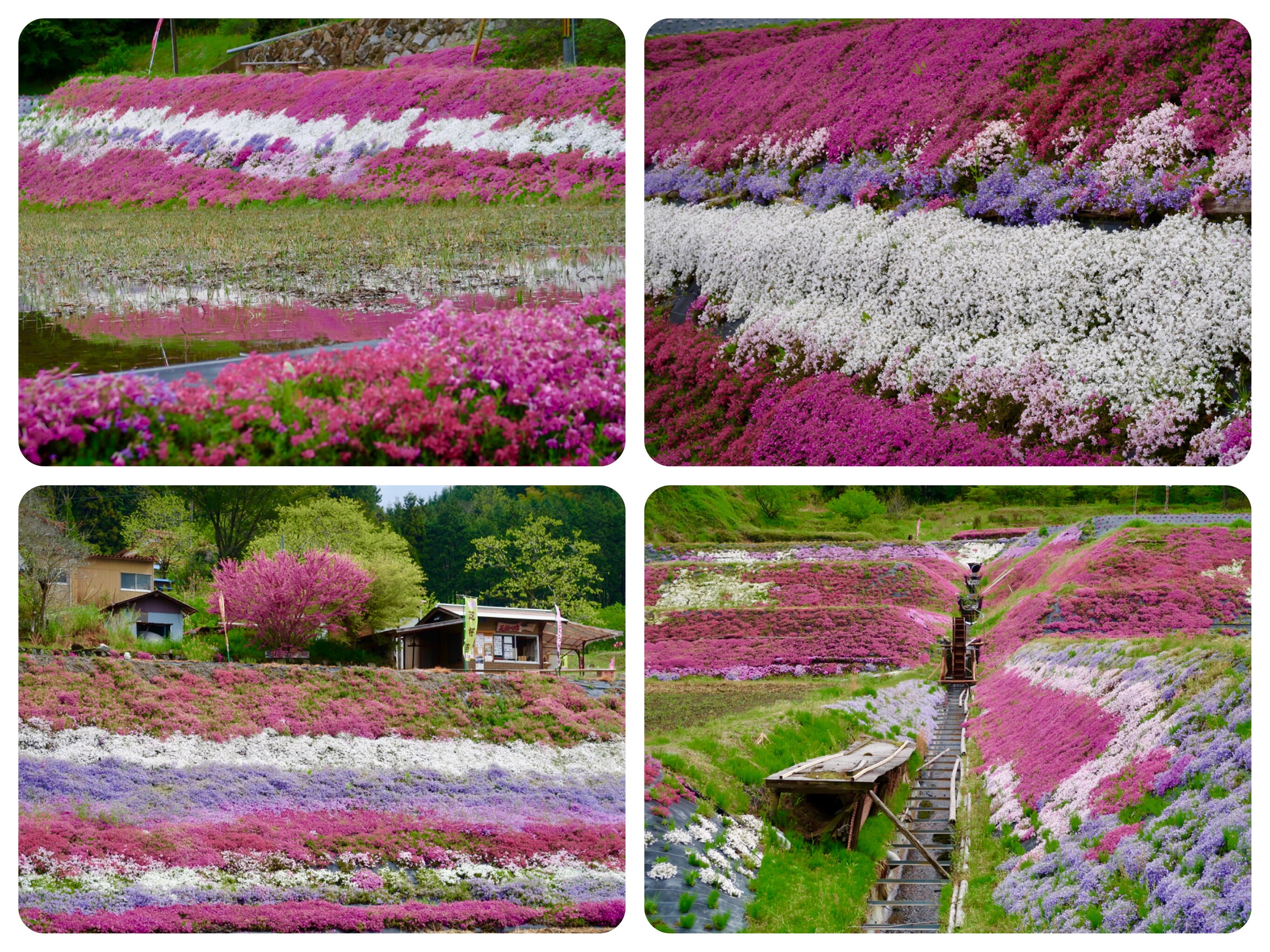 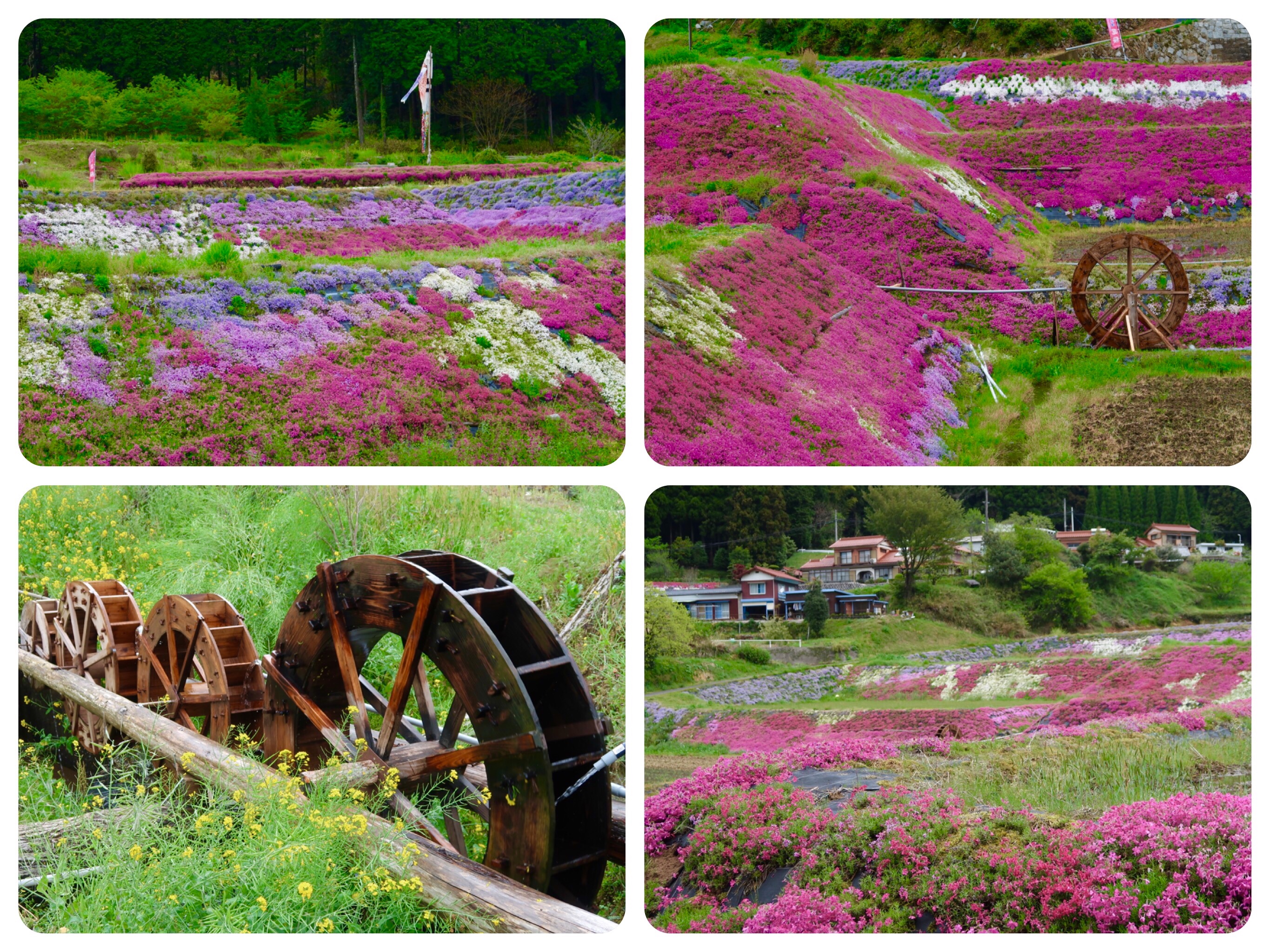 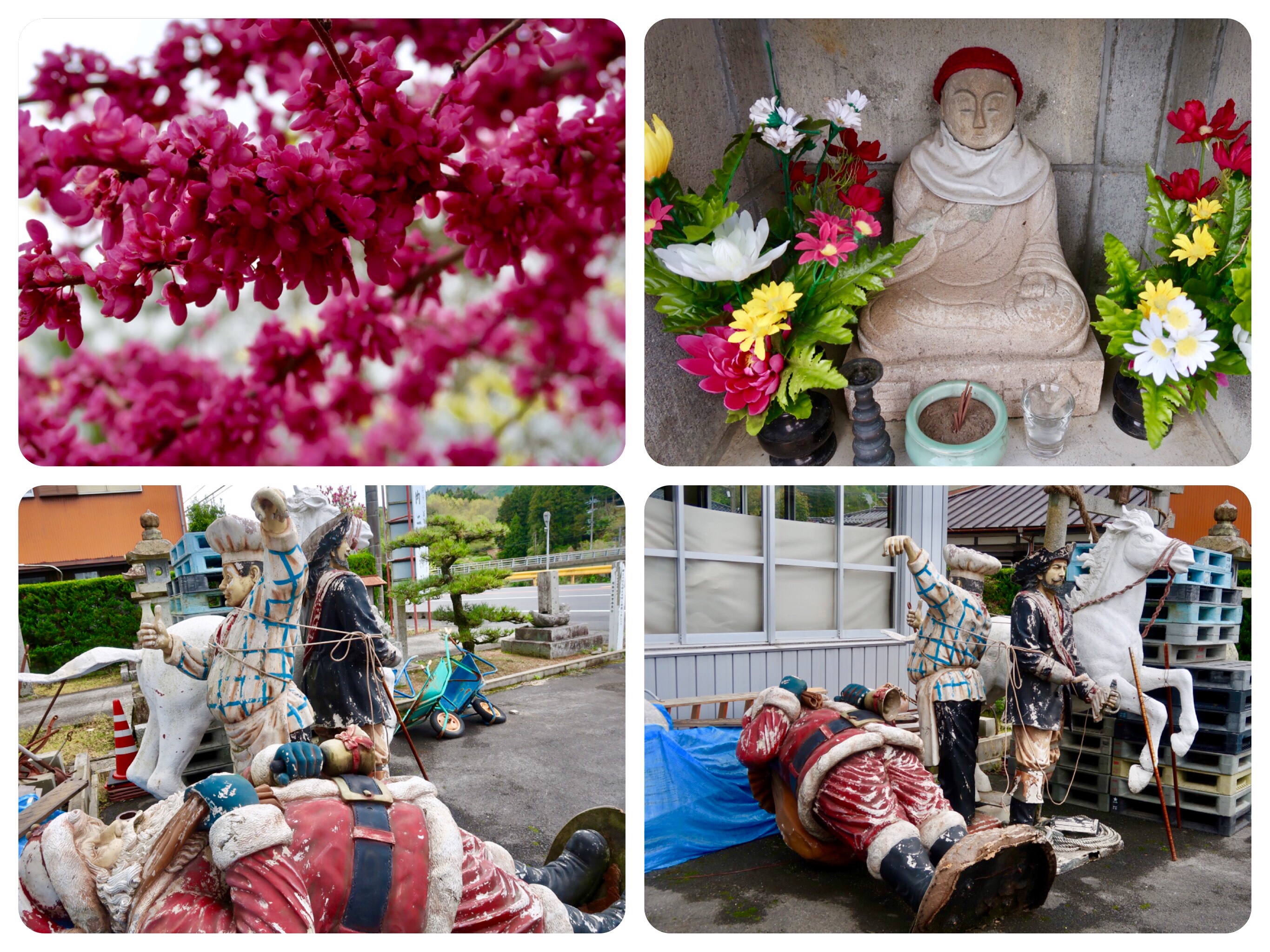 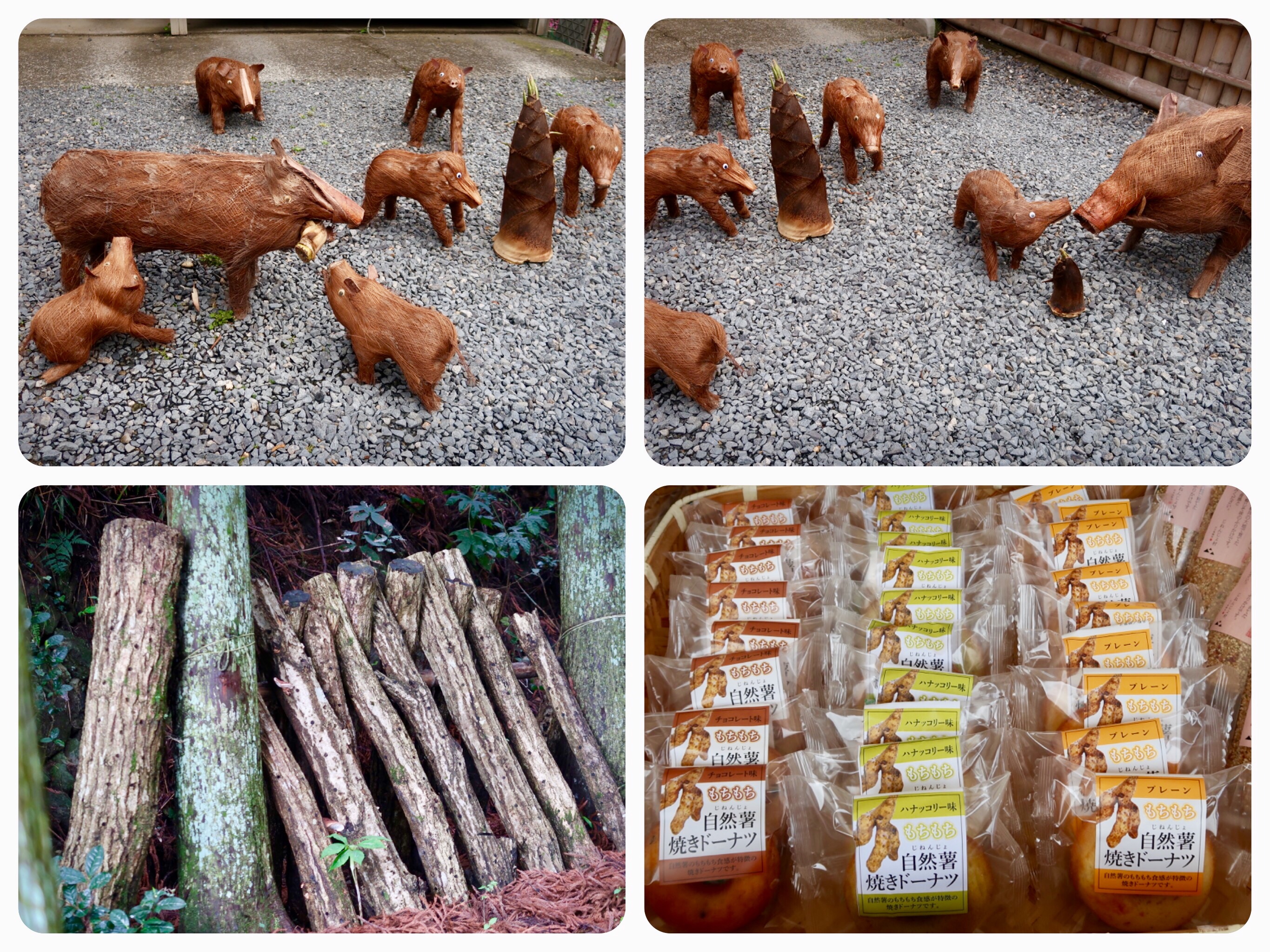 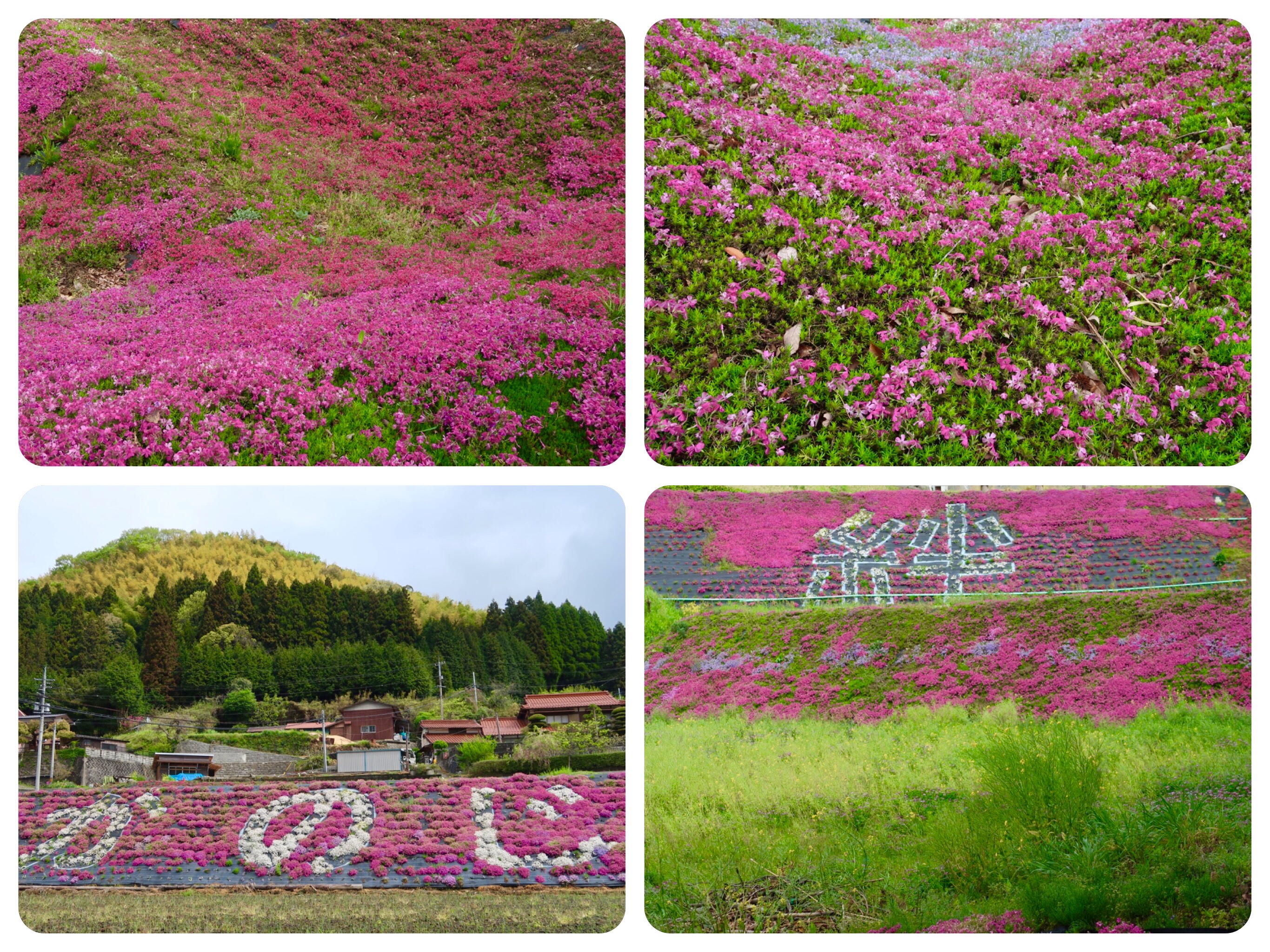 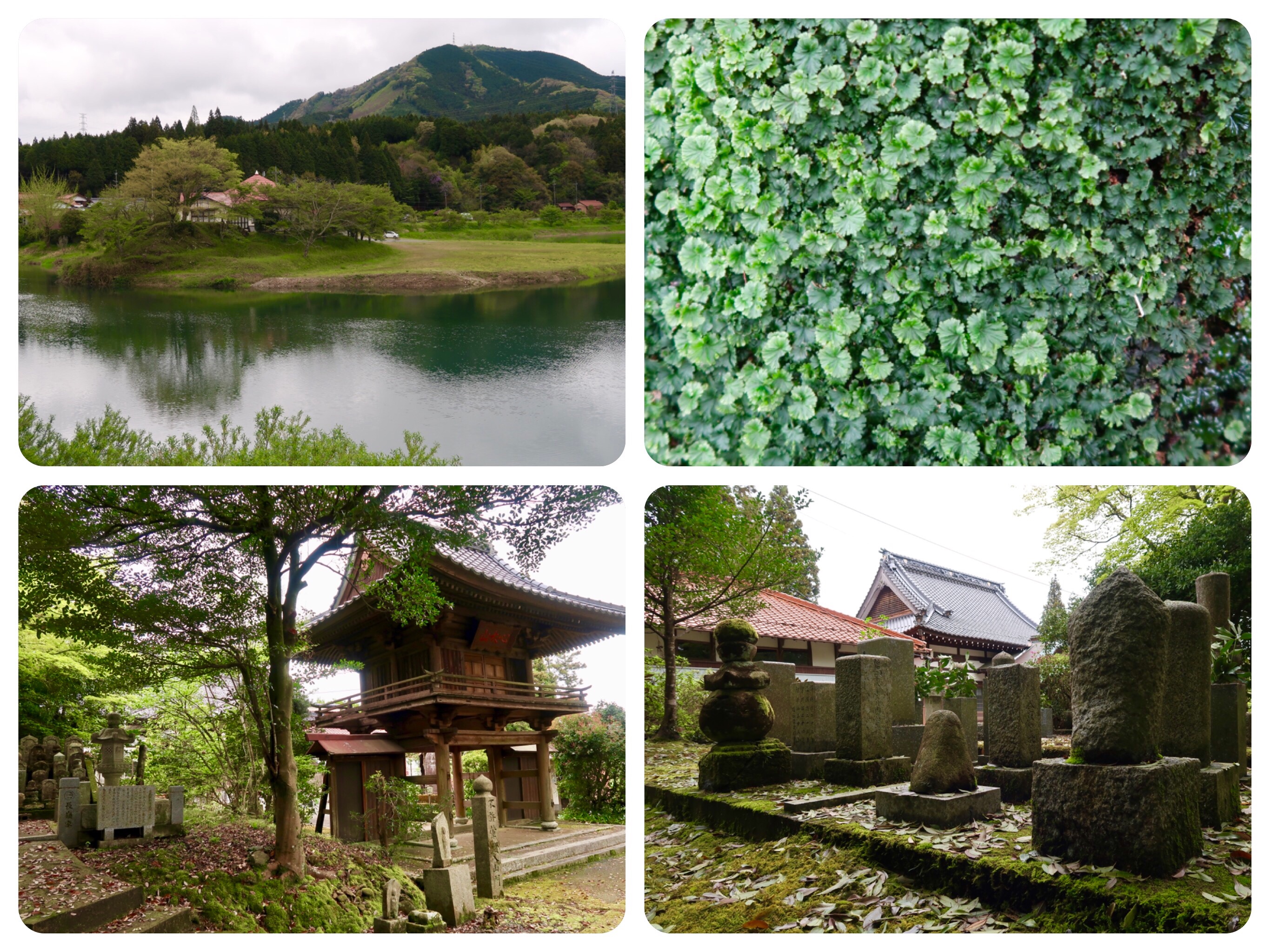 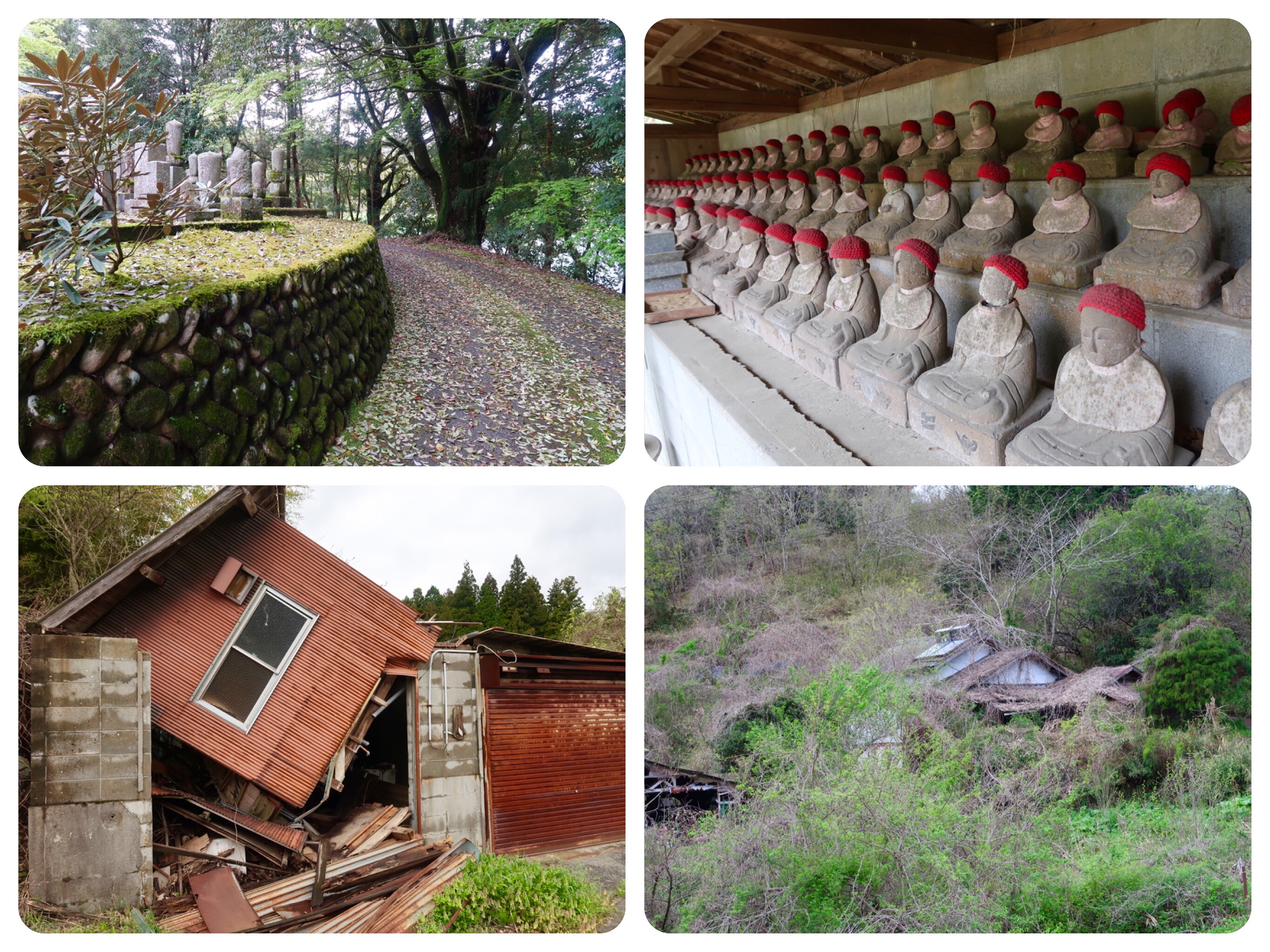 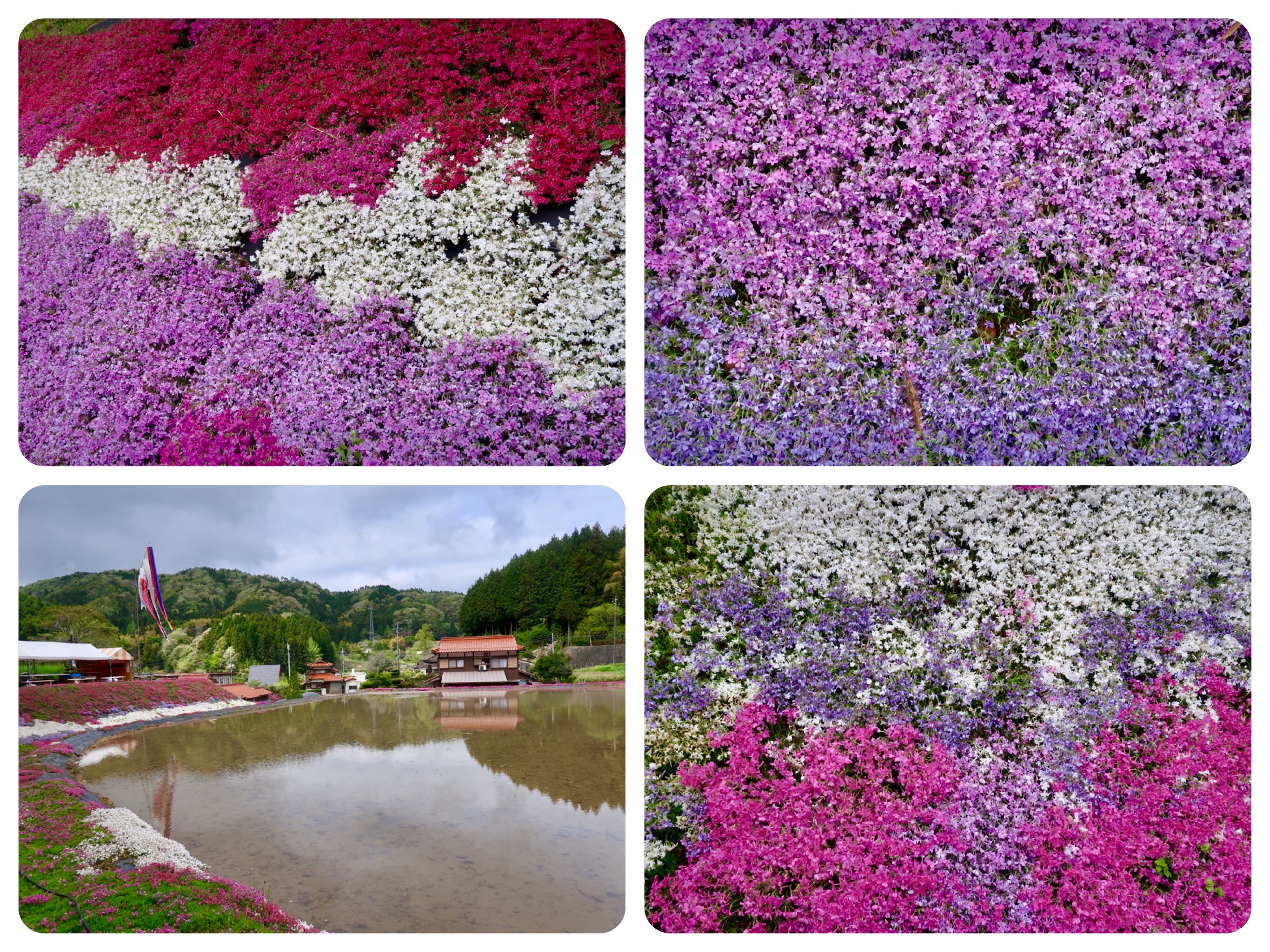 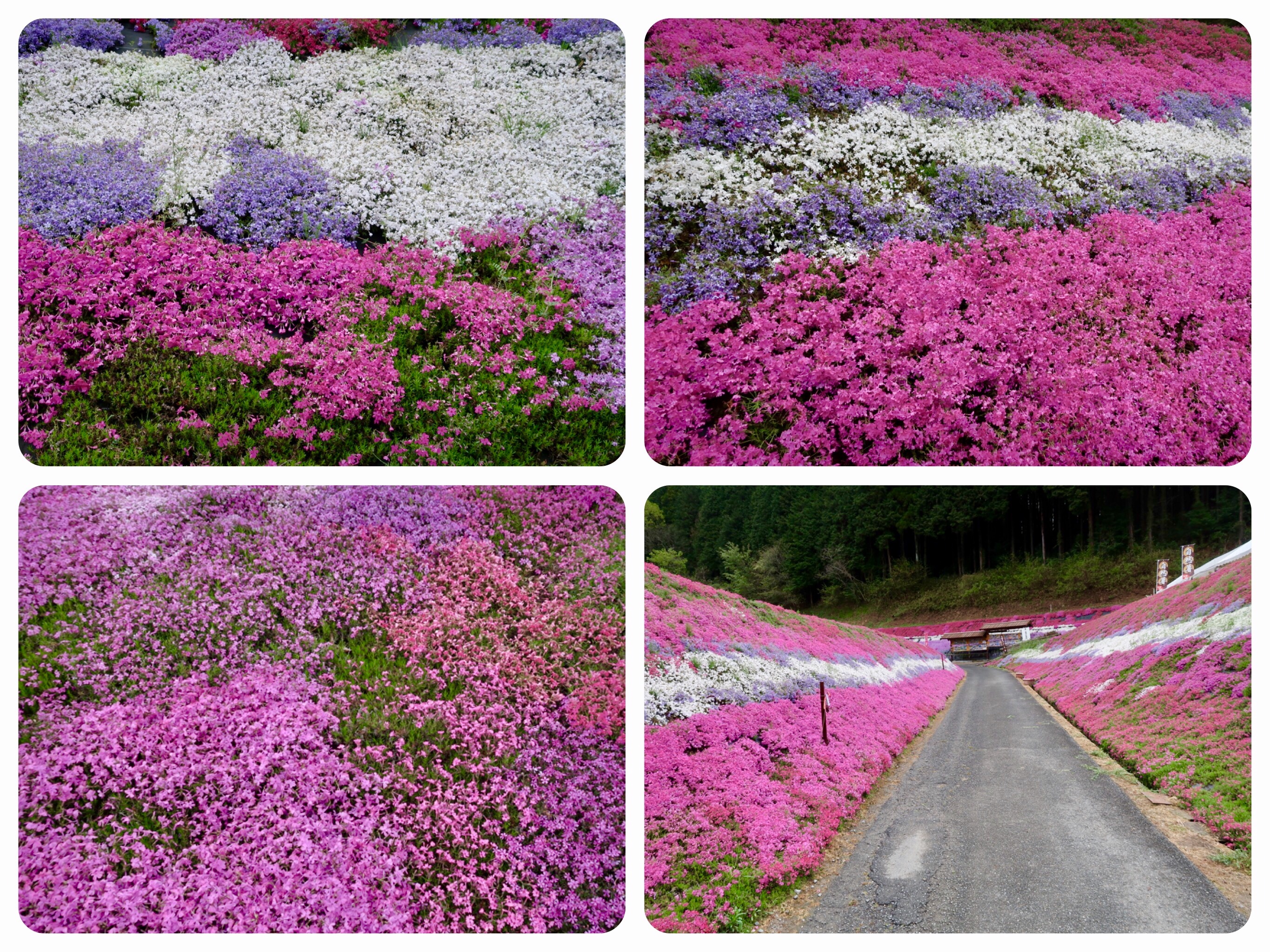 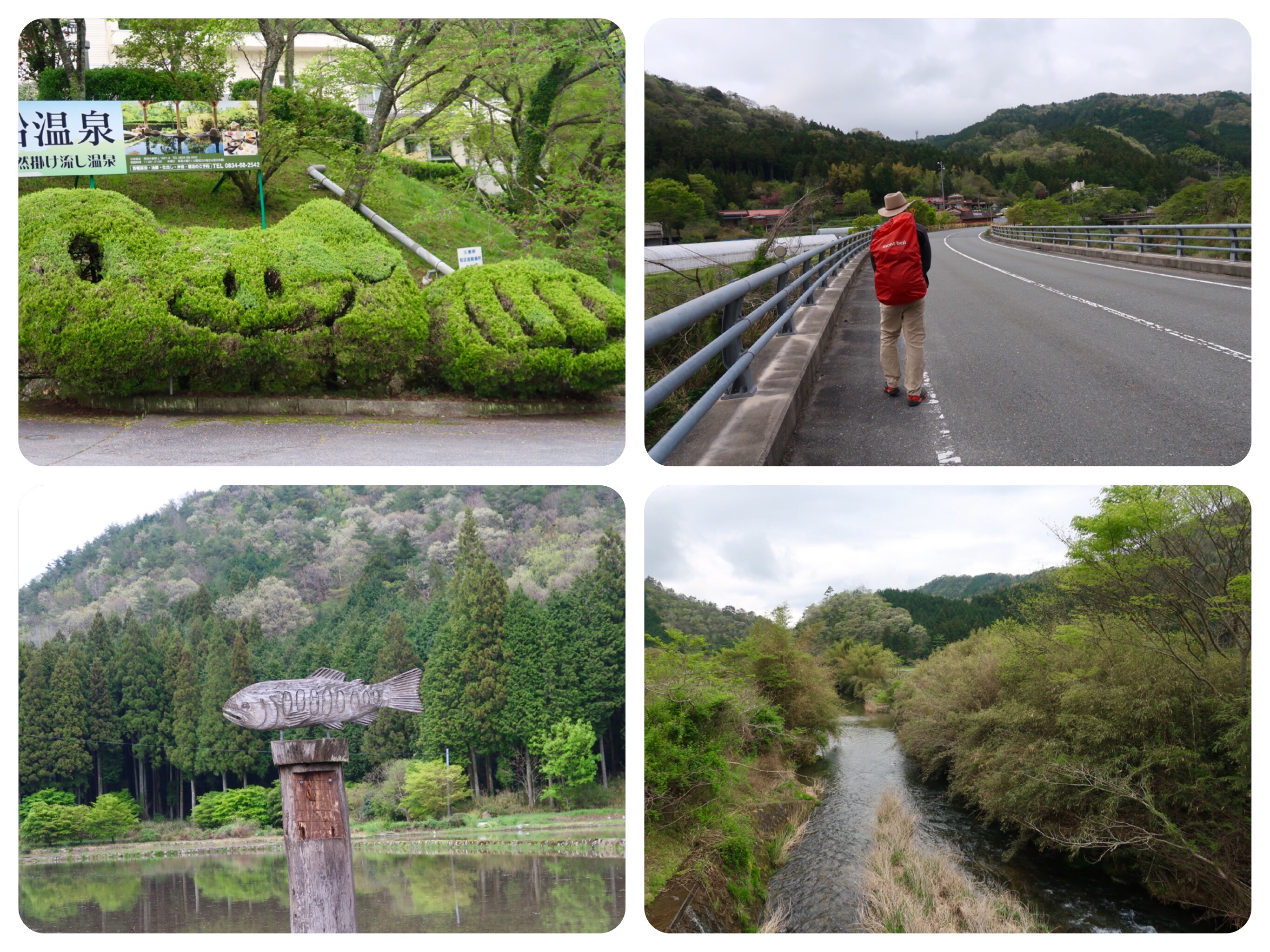 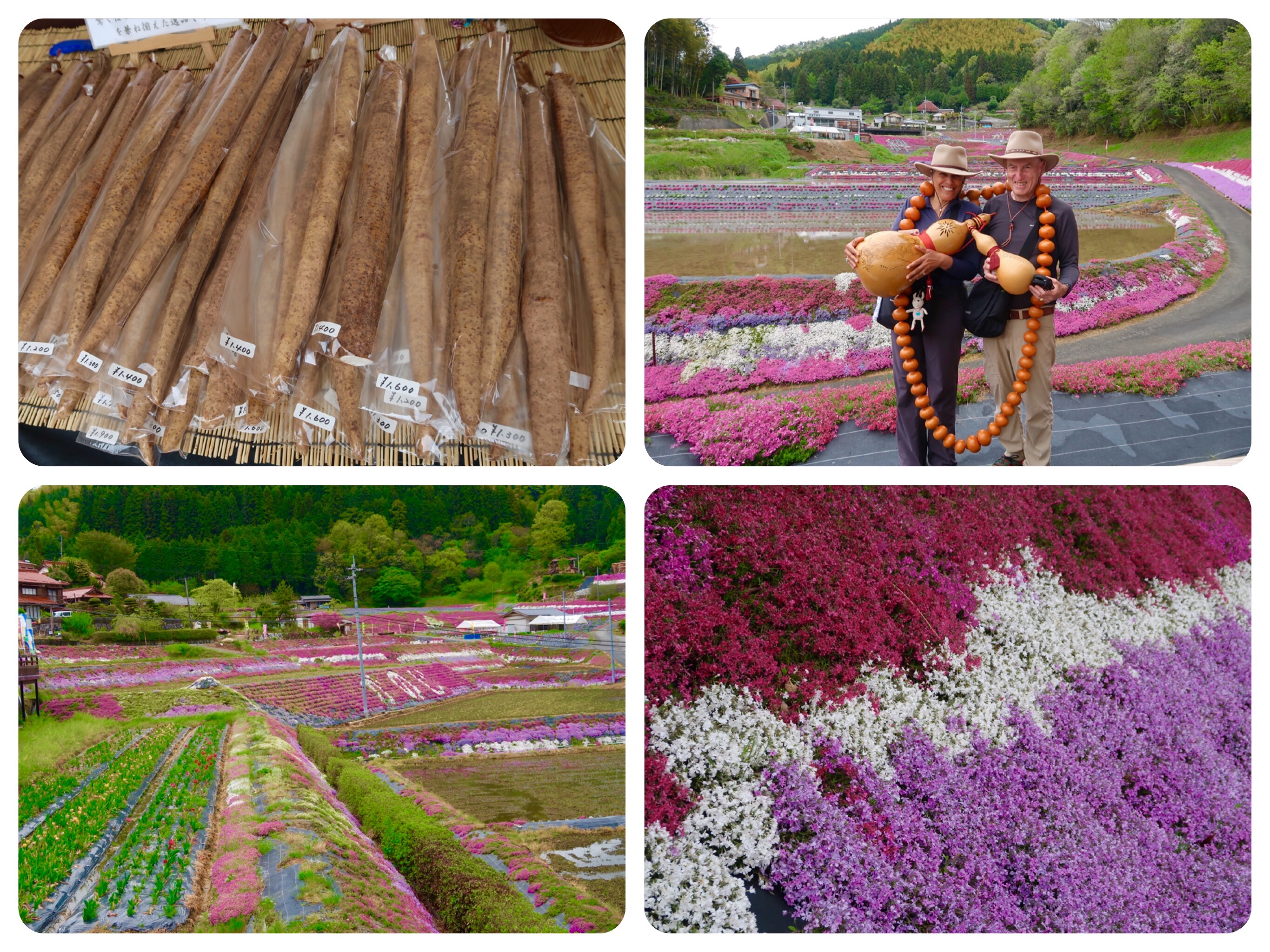 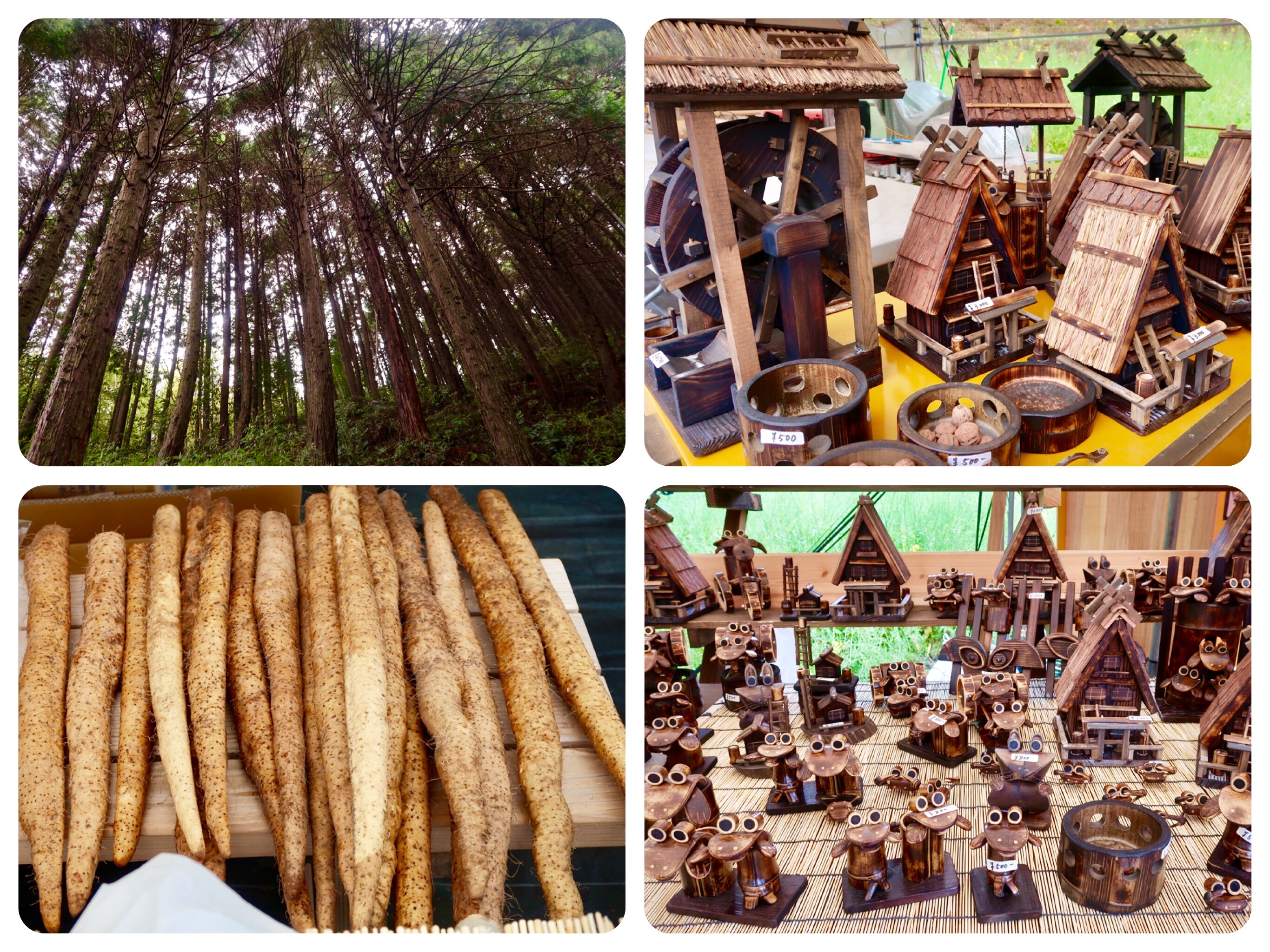 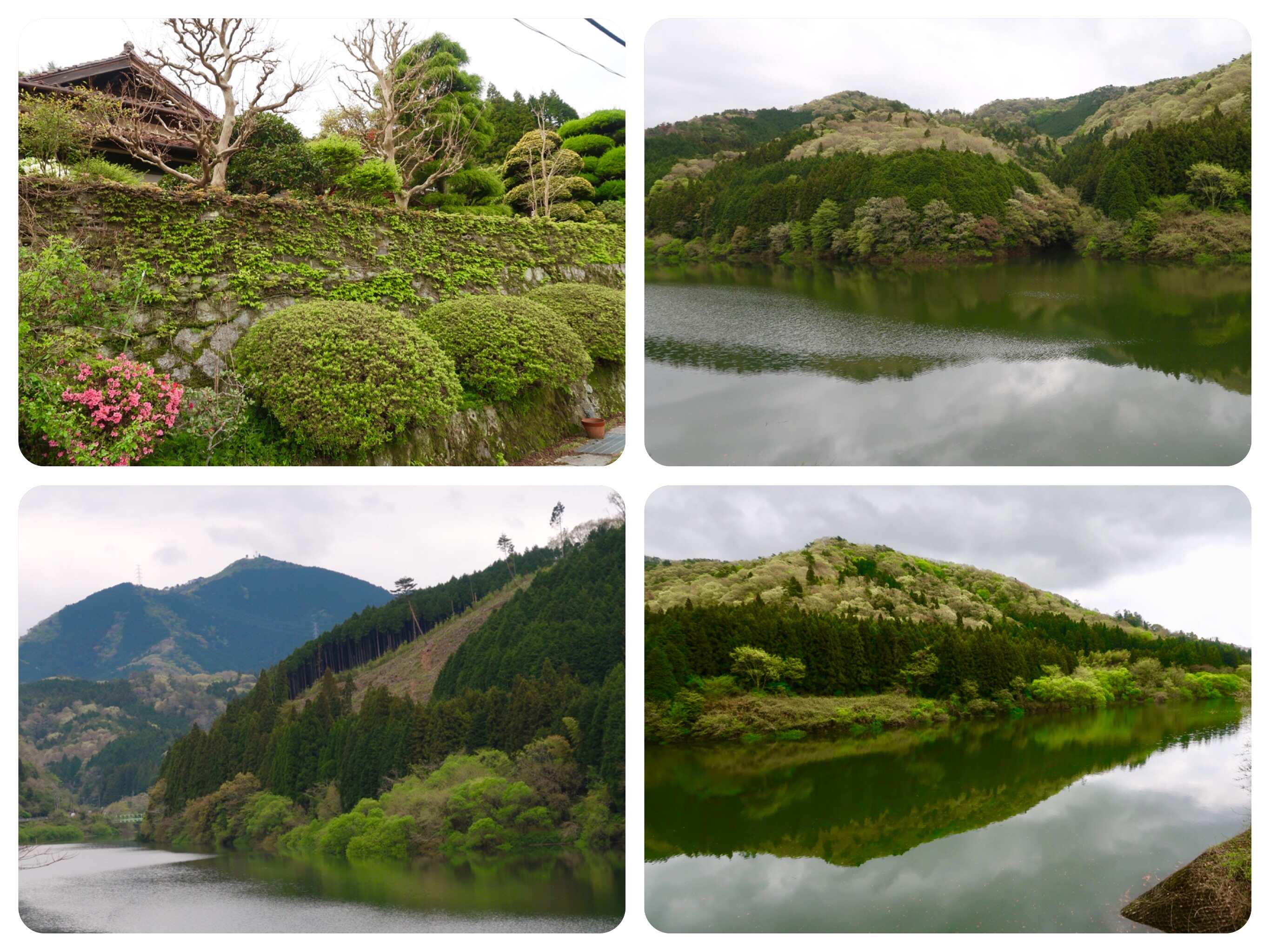 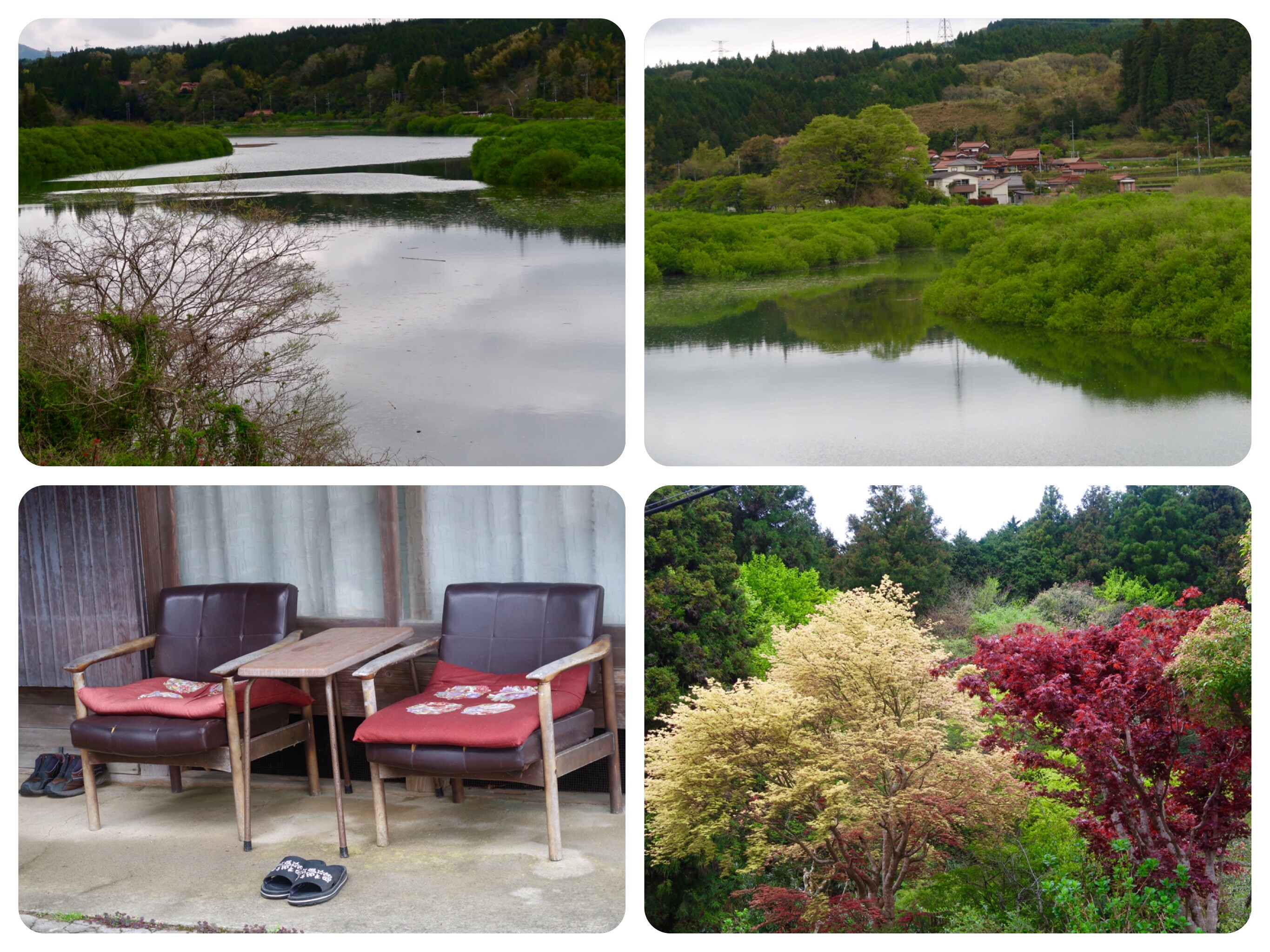 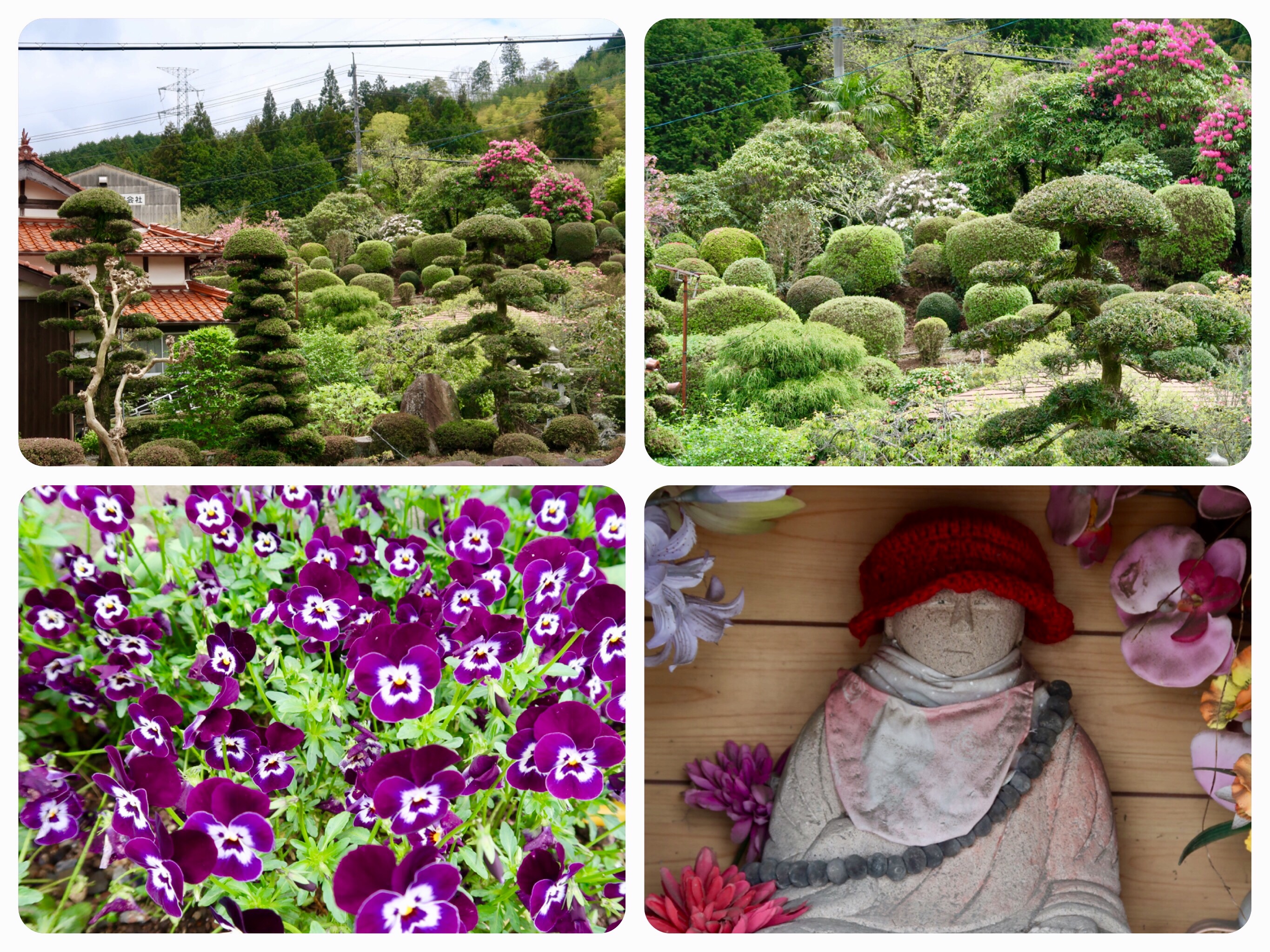 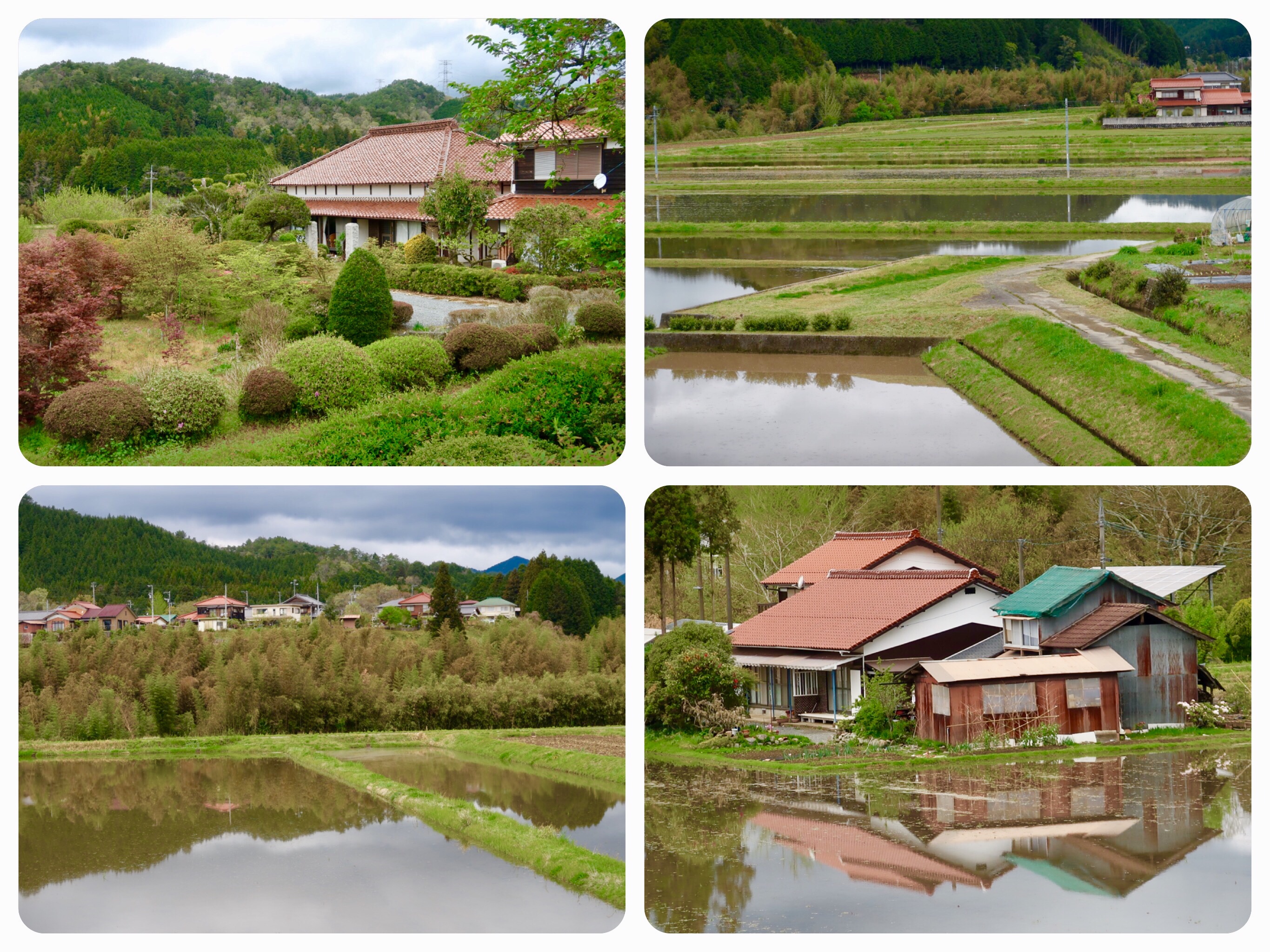 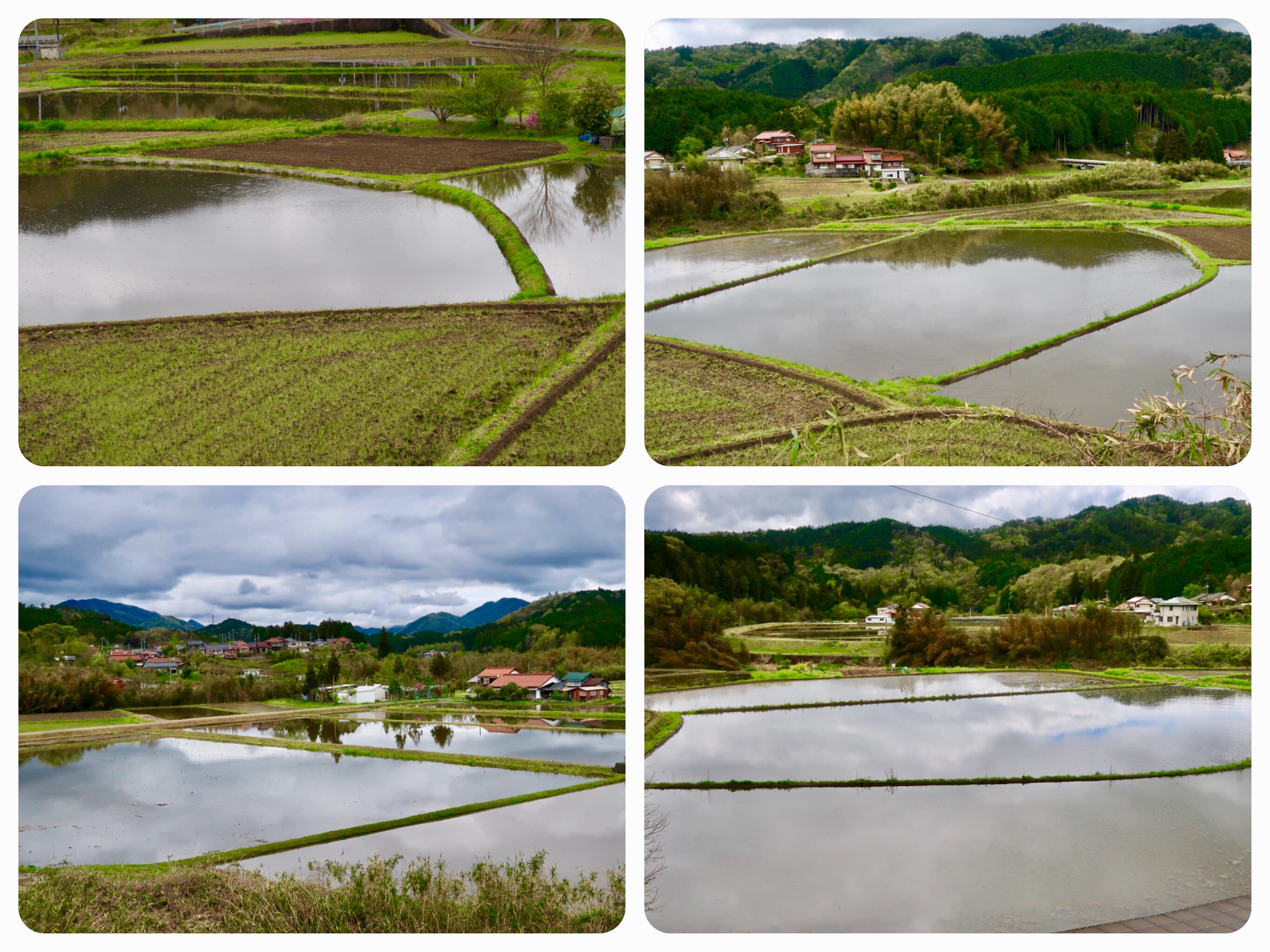 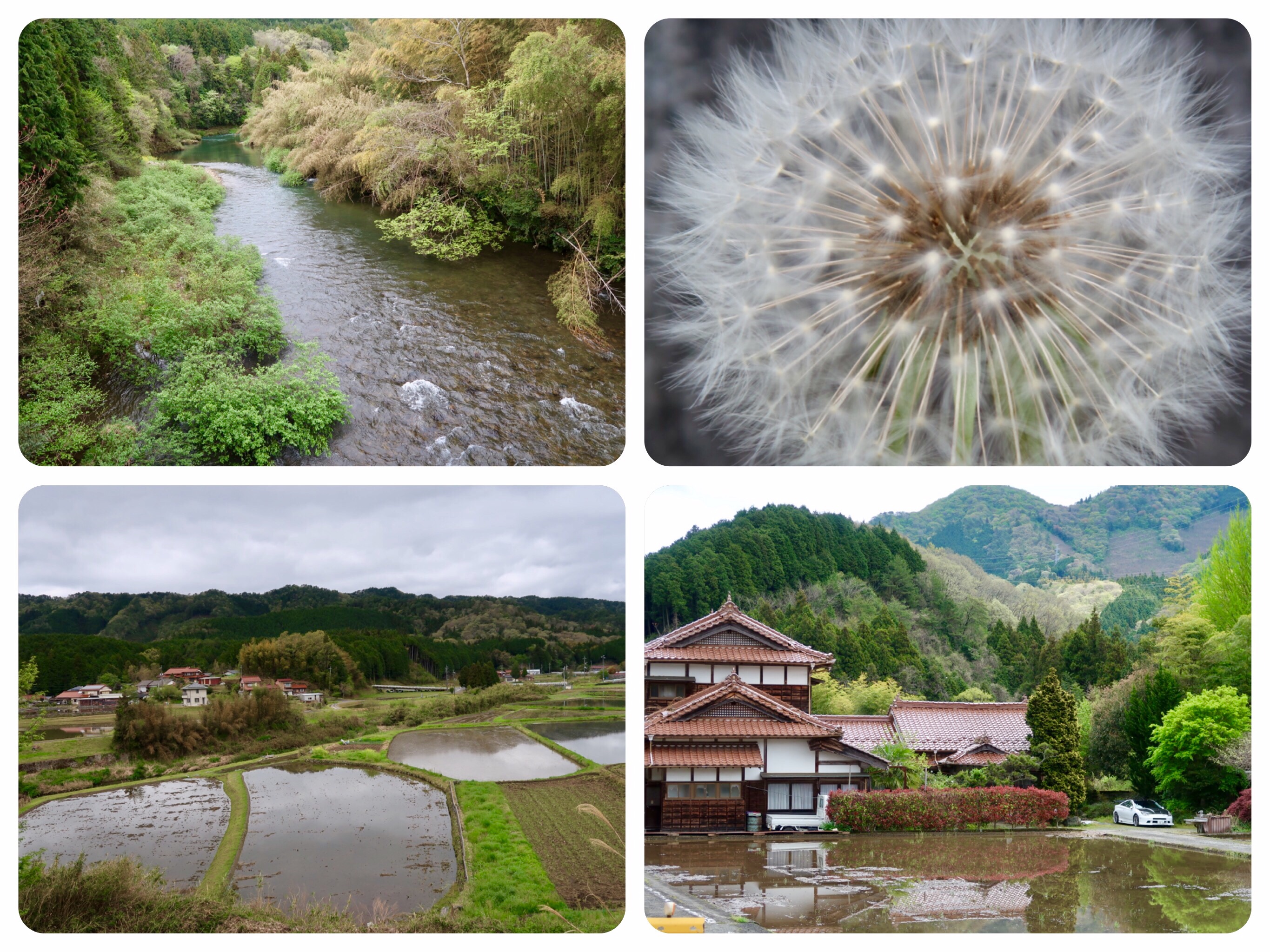 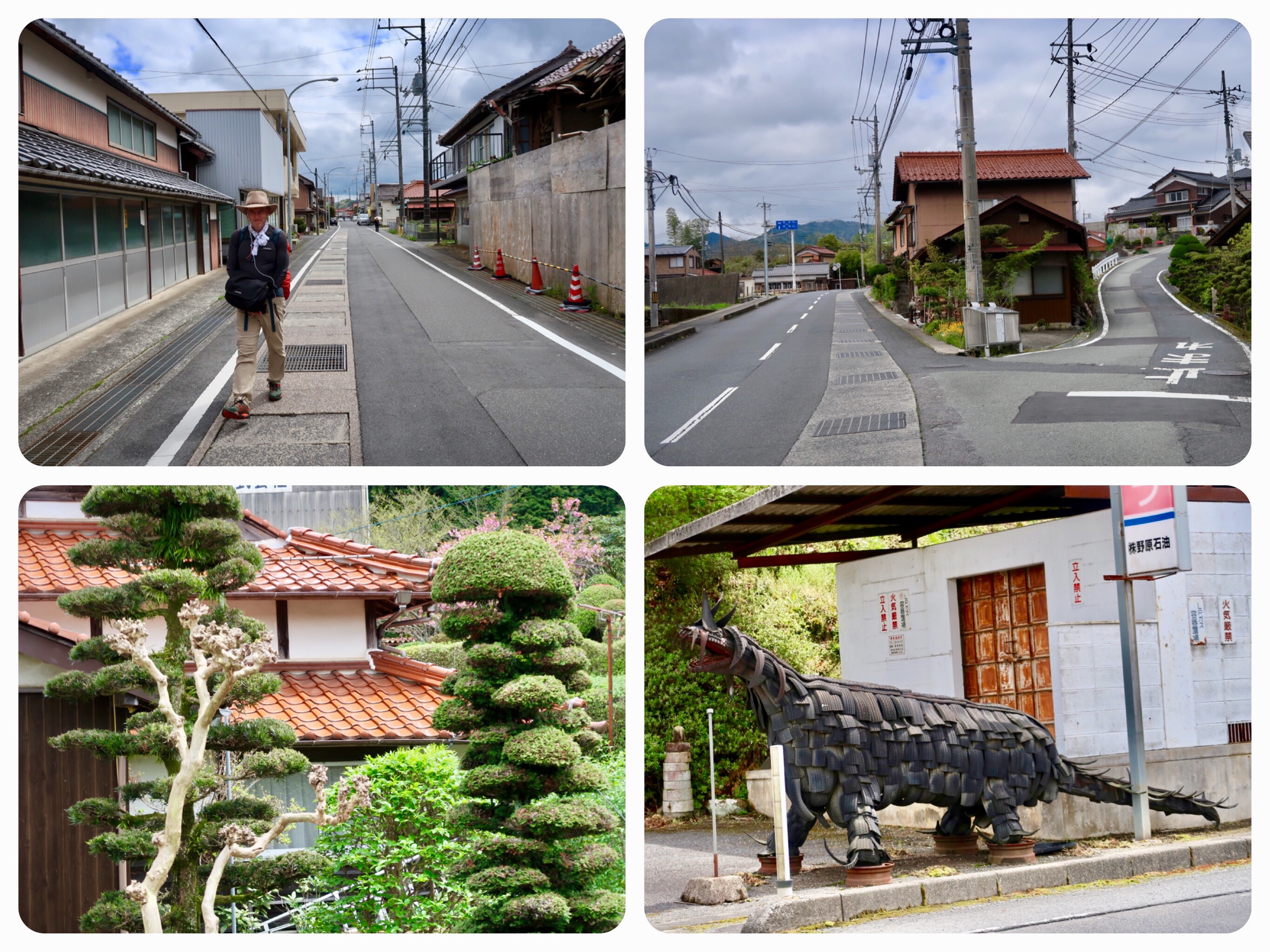 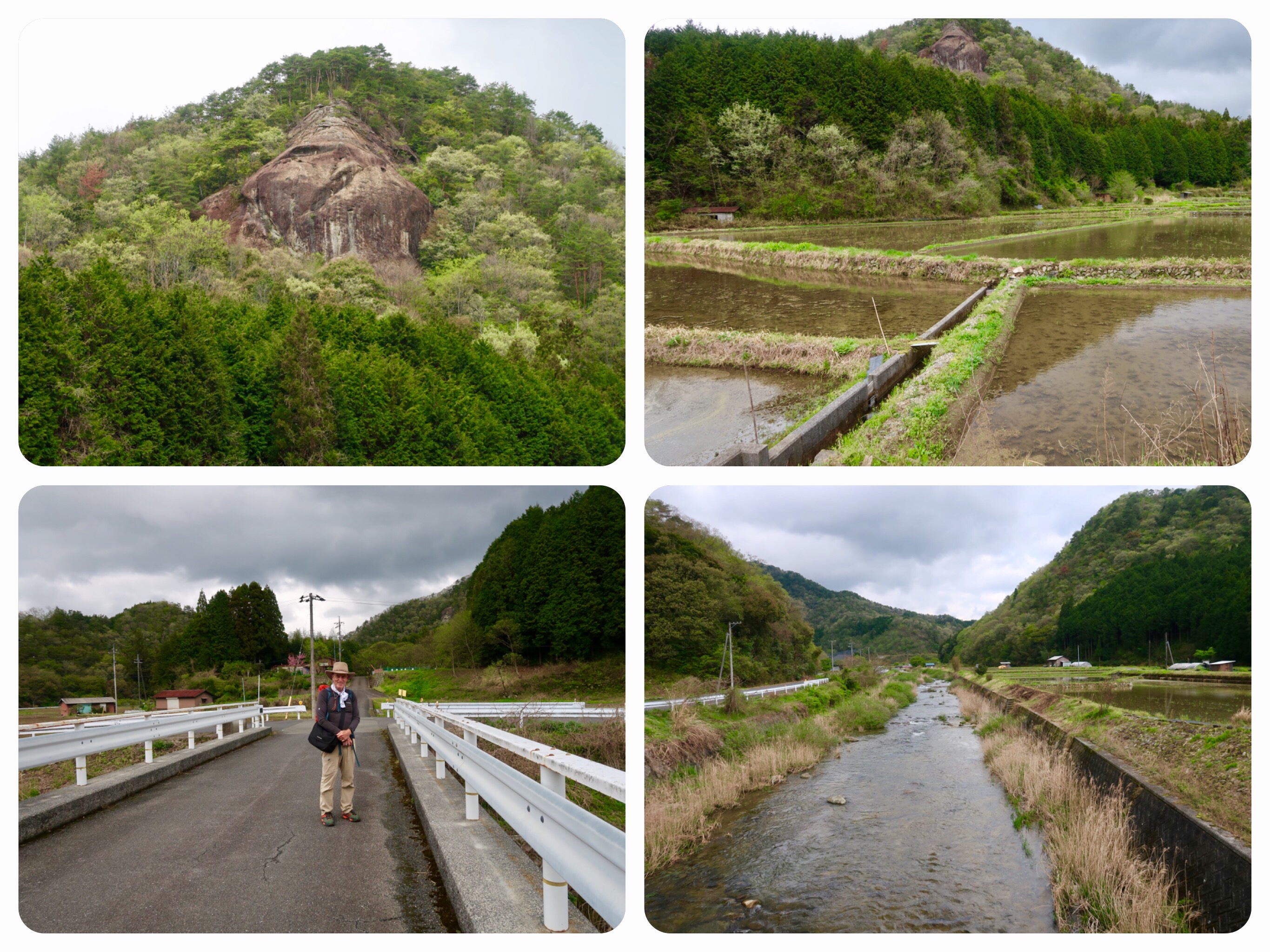 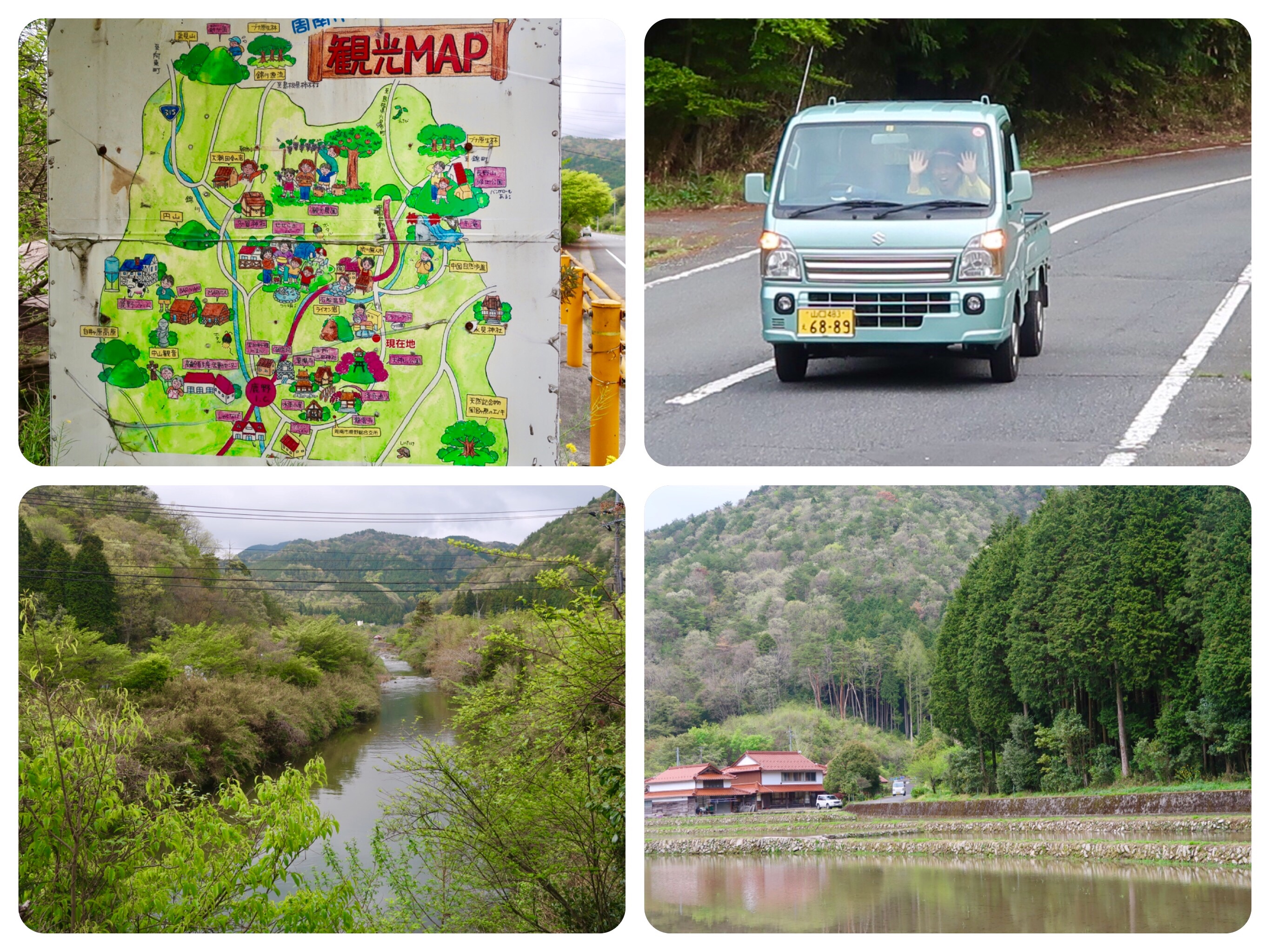 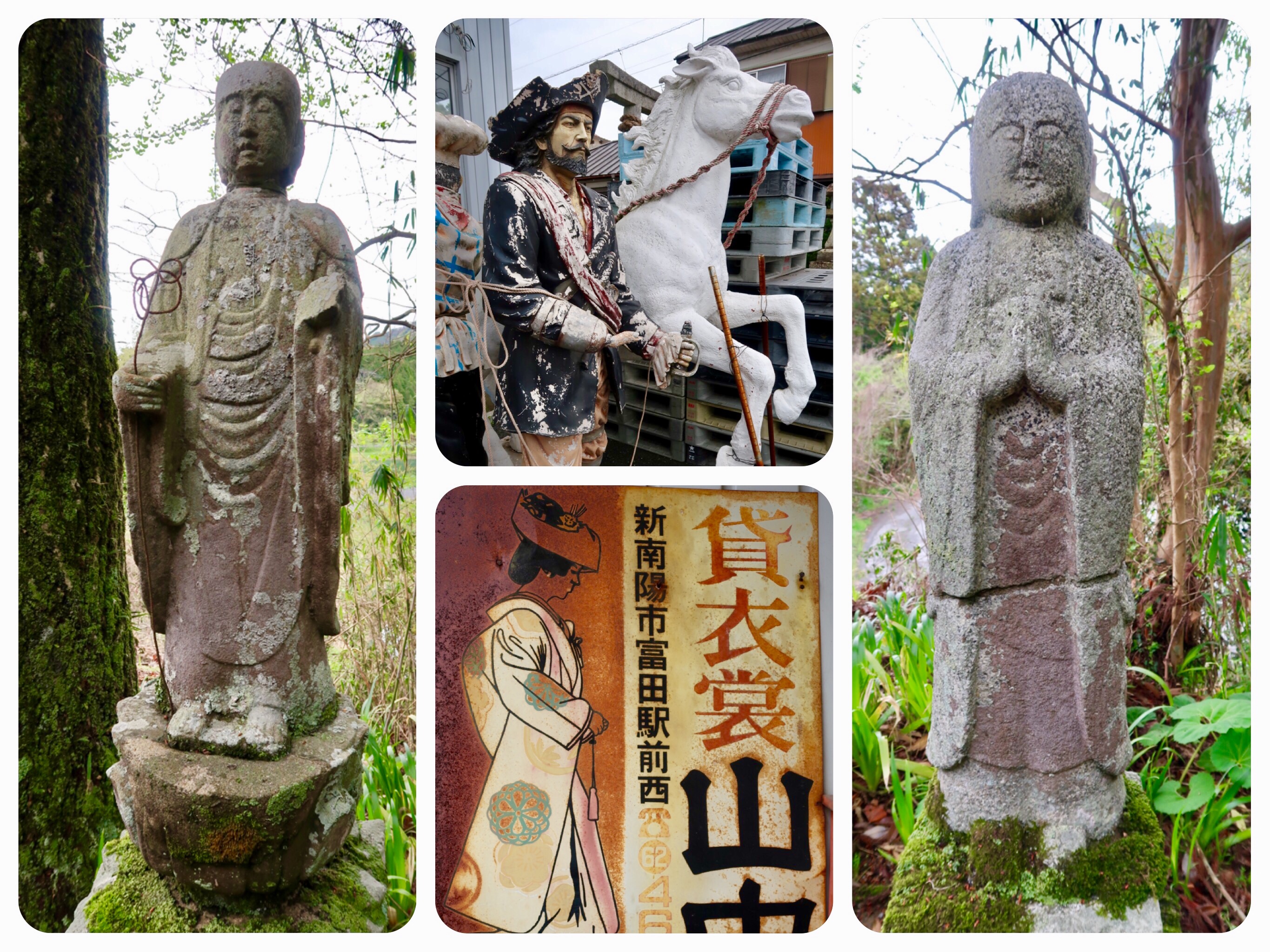 Breakfast at our hotel was a busy affair, with every seat taken and lines of people waiting with their trays at the small buffet.

Our plan was to visit Kanoji, the land of flowering moss, before starting our walk north towards Kano, where temple #15, Kanyo-Ji, is located.

We took the bus from downtown Tokuyama to the moss park.
Situated between the hillside rice paddies, this is a large community effort that flowers only once a year, in April.

They start planting flowering moss on the banks of the rice paddies in early April.
The water for the moss comes from the same natural mountain springs that are directed to the rice fields.

The full bloom occurs for one week, around April 20-27.
After that the flowers start to wilt.

We left our backpacks at the entrance to the park with the three sweet people who collected the admission fee, and walked along the paths between the rice fields to admire the gorgeous multi-colored flowering moss plants.

It was a lovely stroll around the colorful moss, so lovingly planted by the community and which flowers for only a week each year.
From the looks of it, they were expecting a crowd.
There were two cafes offering coffee and food, an ice cream shop, an Udon noodle stand, and tables for local artisans.

There was an old man who made beautiful houses, animals and water wheels from bamboo, and the stand of a friendly couple who sold mountain yam products.

The mountain yam looks like a thick and very long Burdock.
For those of you who do not know what a Burdock looks like, imagine a very long carrot, almost four feet long, brown and thick.

They explained that you take the yam, grate it in a specially made ceramic bowl that has serrated sides and bottom, and let it stand.

After a few moments, it will foam up, and it is then ready to use.
It can be used to make anything from savory to sweet foods.
I know and love mountain yams, but it is definitely an acquired taste.
I also have at home that same ceramic bowl, that I use to purée raw vegetables.

We bought from them some small chocolate muffins made with mountain yam flour, which were very delicious as our lunch, which we ate along with some fruit, while we sat on a bench by the Shrine.
They also gave us some Yam jelly to try, which was very Yummy (get it? Yam-Yummy.)

Our visit to the park took about an hour.
We then put on our backpacks, thanked the friendly people at the gate, accepted a gift of some postcards of the flowering moss that they gave us, and politely declined the gift of two small moss plants which we could not carry, and started walking to Kanyo-ji.

Google Maps is a very useful app, but it is not perfect.
The walking route that it showed led us around the mountain, making it much longer.
But there was a steep road going right though the moss land and over the mountain, which shortened our walk by five kilometers for the day.

It was a very steep climb, but it was not long before the forest road had flattened out, and then we had a long descent, and began walking by the riverside.

We stayed walking along the river all day.
We passed by calm and beautiful farms and forests, listening to the birds, the water gushing from the mountains and the frogs.

We stopped in another temple along the way, just to soak in the serene atmosphere and see the moss growing on the trees.

It was a peaceful, beautiful countryside, with very little traffic.
There were also no places to eat, drink and no convenience stores until we reached the outskirts of Kano.

The only place to stay in the area of the temple is a basic cabin rental or a tiny hot springs hotel, called Ishibunė Onsen.

It is a very small hot springs hotel and restaurant, featuring delicious buckwheat soba noodles.
The soba noodles have only the most simple ingredients, the locally grown buckwheat and the pure mountain spring water running down this chain of mountains.

We walked to the onsen, skirting a sacred mountain called “The Lion Rock.”

The Lion Rock was named many hundreds of years ago, because it resembles the face of a Lion.
The place where the eyes of a lion are located, is called Kannon-do, and a Ruyin Kannon is enshrined there, as the main deity, guarding the people from the mountain.

At the edge of Kano, we stopped at a wooden bench in the shade to take our first break of the day.
Across the street was a small and nearly empty grocery store run by an old lady.
We bought some bananas, an orange and some water, and sat to eat it with our small yam muffins.

The weather was nice for a mountain walk.
Not sunny, but cloudy and without rain.

From there, we walked along more rice fields swarming with bugs and mosquitoes.
The area is very lush and there is water running everywhere.
Water was gushing in canals, creeks, and in small waterfalls, and standing in the rice fields, which makes them a mosquito haven, but we did not get one single bite, which made me feel like a welcomed visitor

On a rural road, a small pickup truck stopped ahead of us, and a couple was sitting inside, waiting for us to approach.
The woman, who spoke very good English, asked us many questions, including
where we came from, why we are walking, where we are going to and why.

She told us that she was from the Philippines and that she was married to a Japanese farmer, and that they have a pear farm in this area.

She was almost sad that she could not invite us to stay with them for the night, because we had already booked a stay at the onsen.
They were so sweet and exuded such friendly and human loving energies.

Our Onsen hotel is a small place.
The hot spring baths are small, but they do get lots of local people, who come to bathe at the end of their work day.

I saw young girls coming after school and working women, all of whom knew each other and were used to sitting naked together in the hot bath, chatting as if they were completely unaware of their nakedness.
I loved it and I also feel very natural and comfortable in my nakedness among other women.

There are only five small guest-rooms on the upper level of the hot springs.
All rooms are with japanese style tatami mats and futons.
The toilet is across from our bedroom.

We were served a lovely meal of local mountain vegetables, soba noodles, mountain mushrooms, local tofu, fish and other items.

We kept the screened windows a little open at night, to enjoy the cool mountain air and the sound of gushing waters.
I had lots of dreams at night, and my Spirit was flying all over the region.

I felt safe, peaceful and content in this little rural Onsen.
It might not be in tip top shape, it might have only a humble wood design, but it is run by sweet people who really do their job from the heart, and it feels so harmonious to be here.

With harmony and love,
Tali

Total distance walked on the pilgrimage so far: 400 Kilometers

2 Comments on “Day 20 – The Chūgoku 33 Temple Kannon Pilgrimage, Japan – Tokuyama to Ishibune Onsen, Kanoji, the Land of Flowering Moss, and a Beautiful Mountain Walk to Kano”