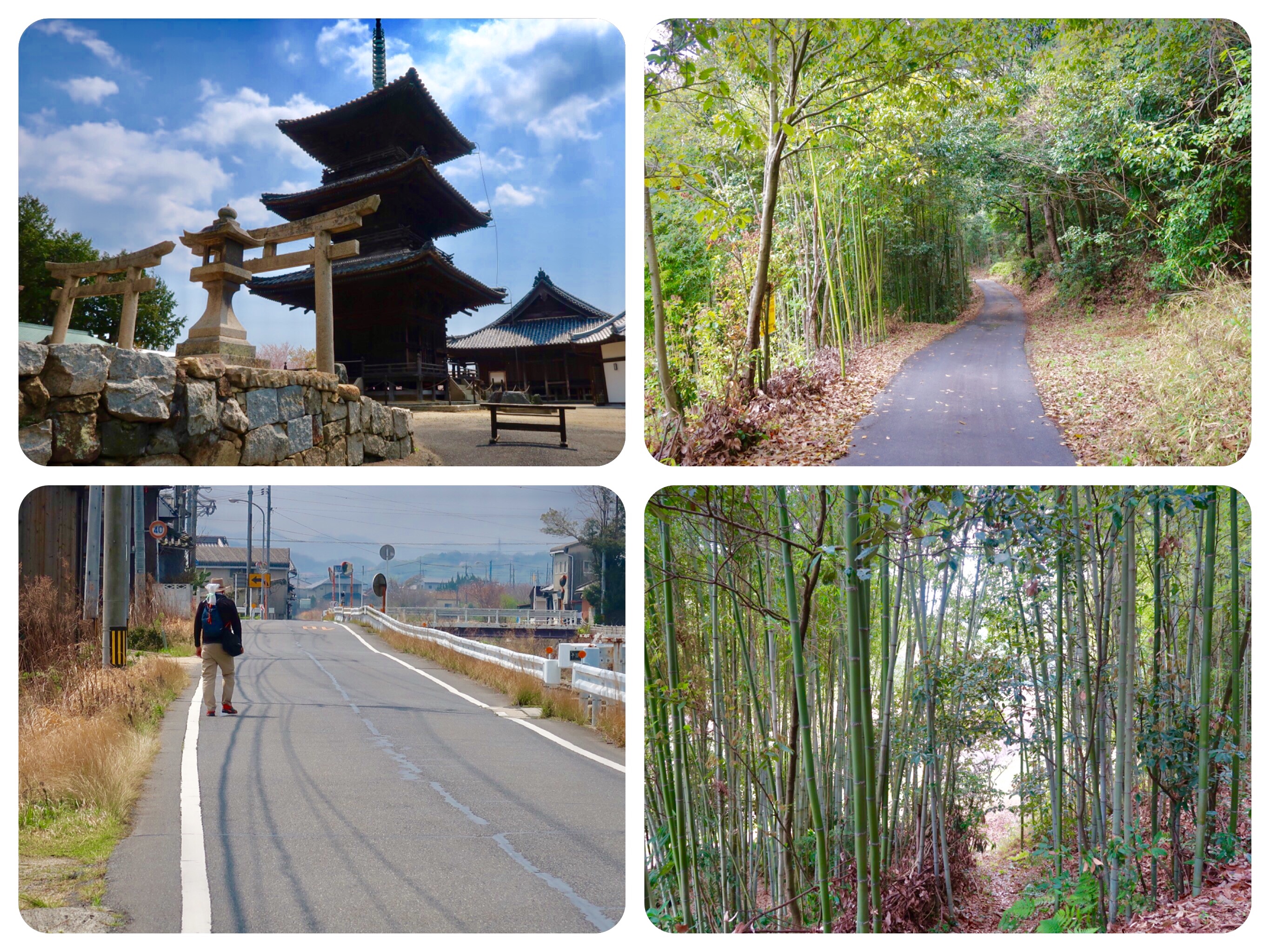 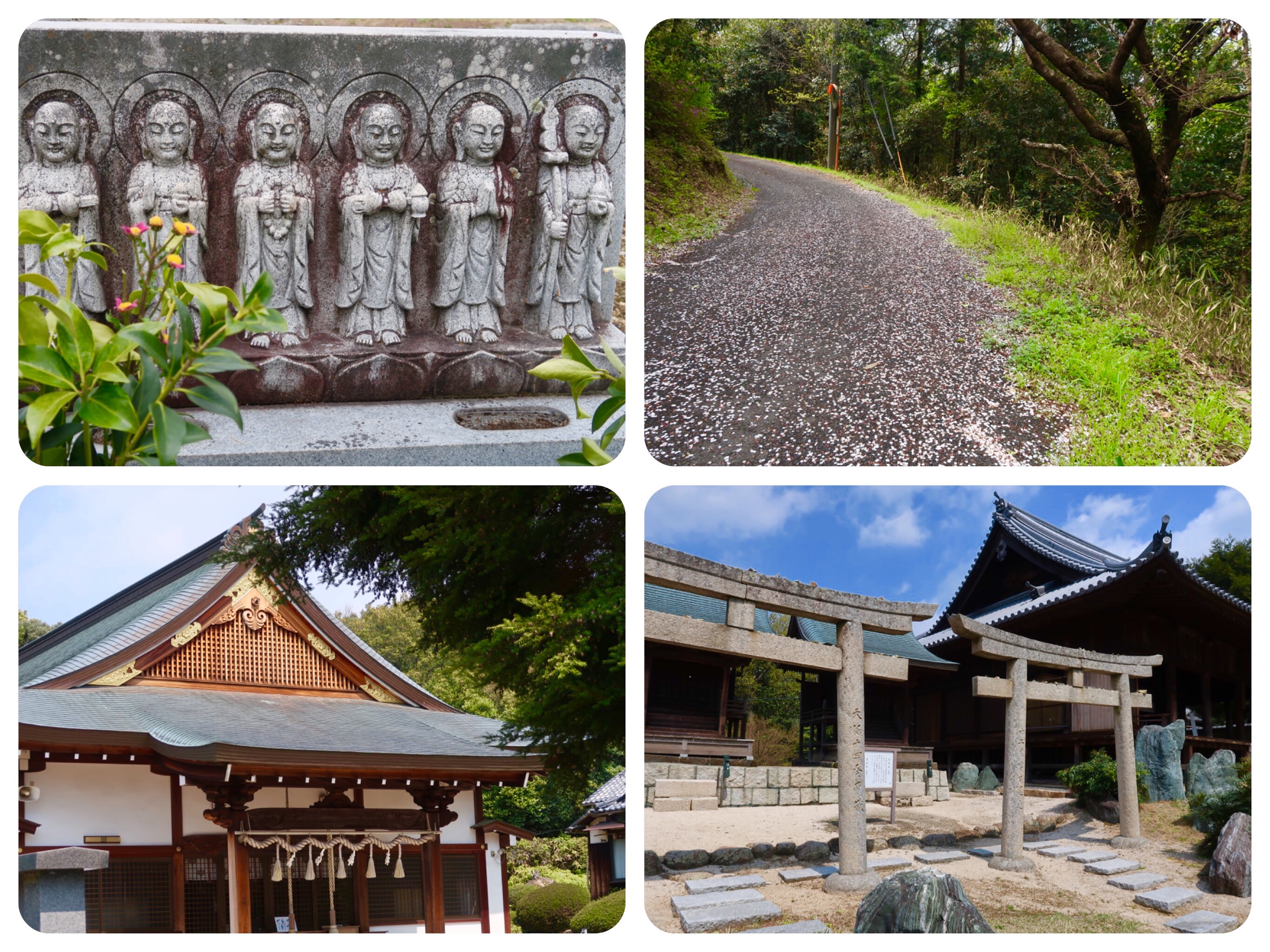 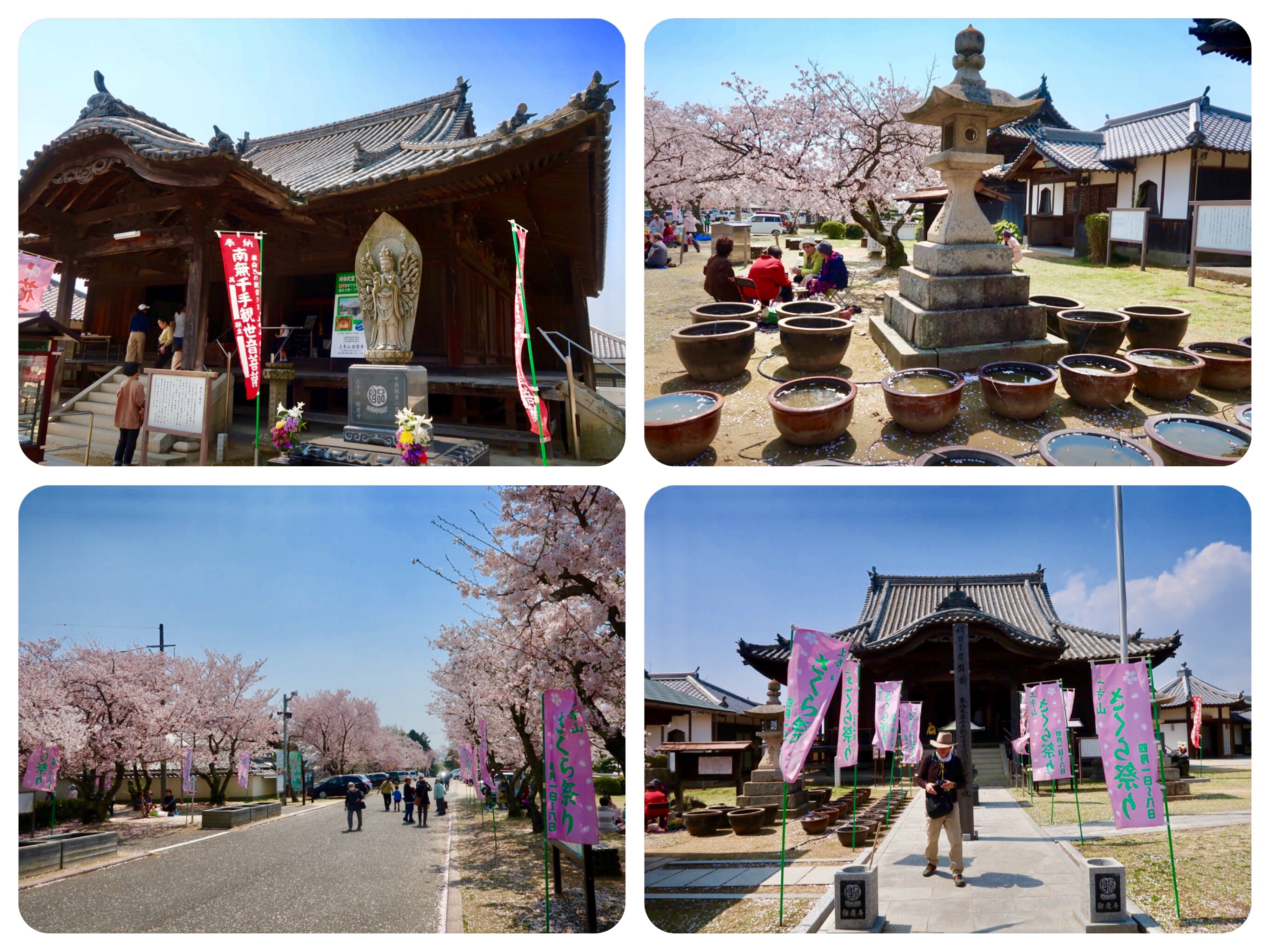 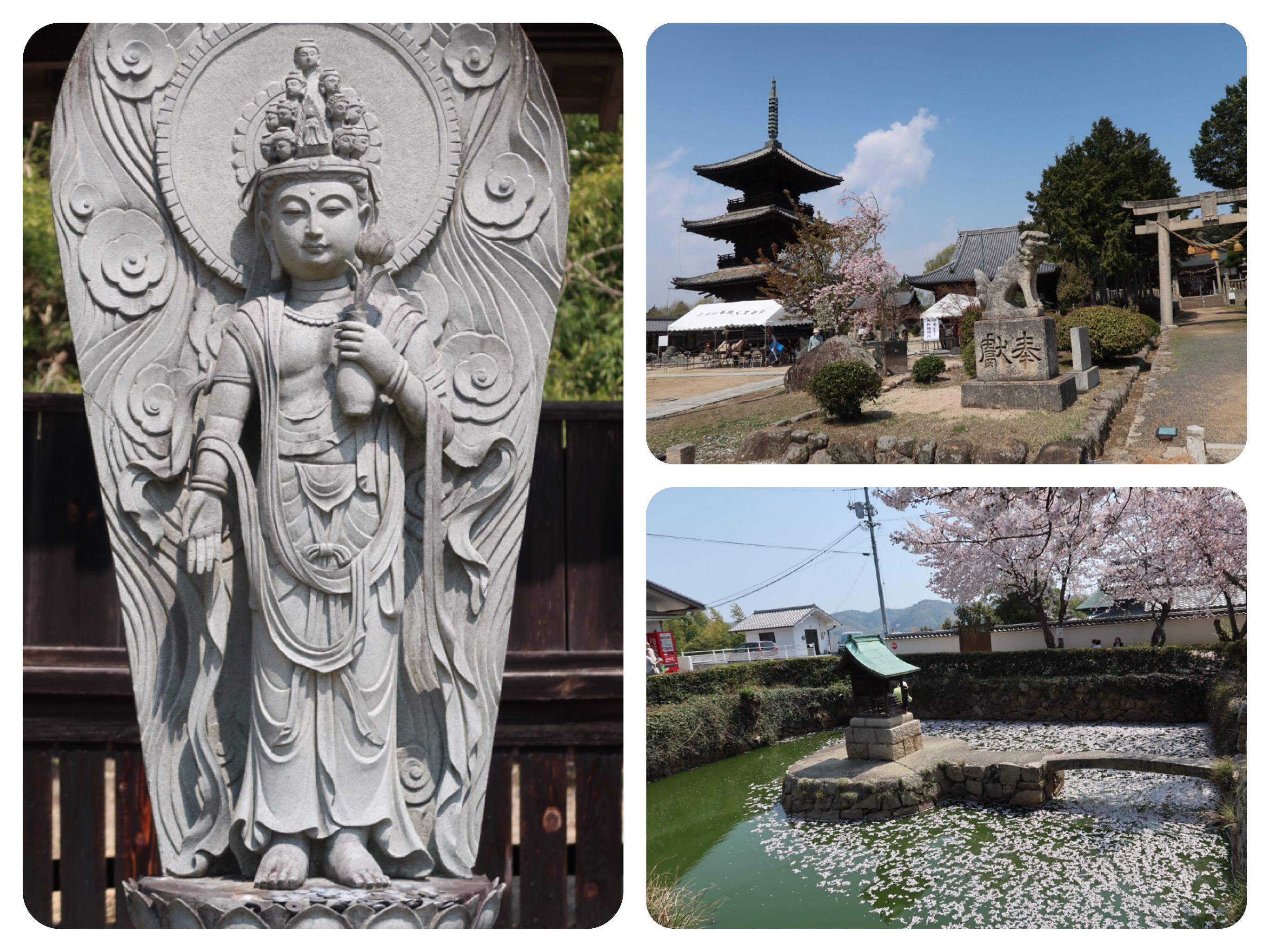 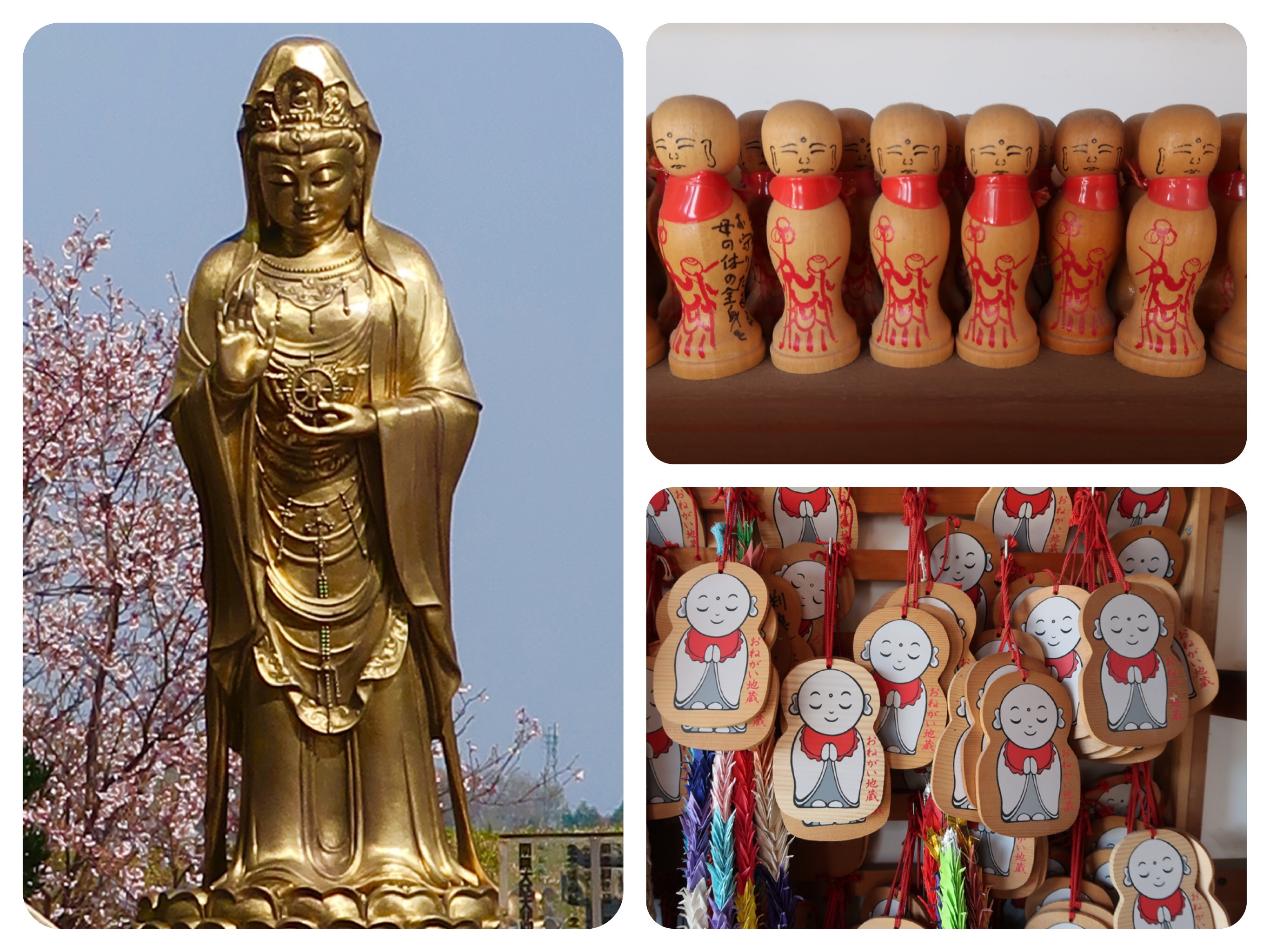 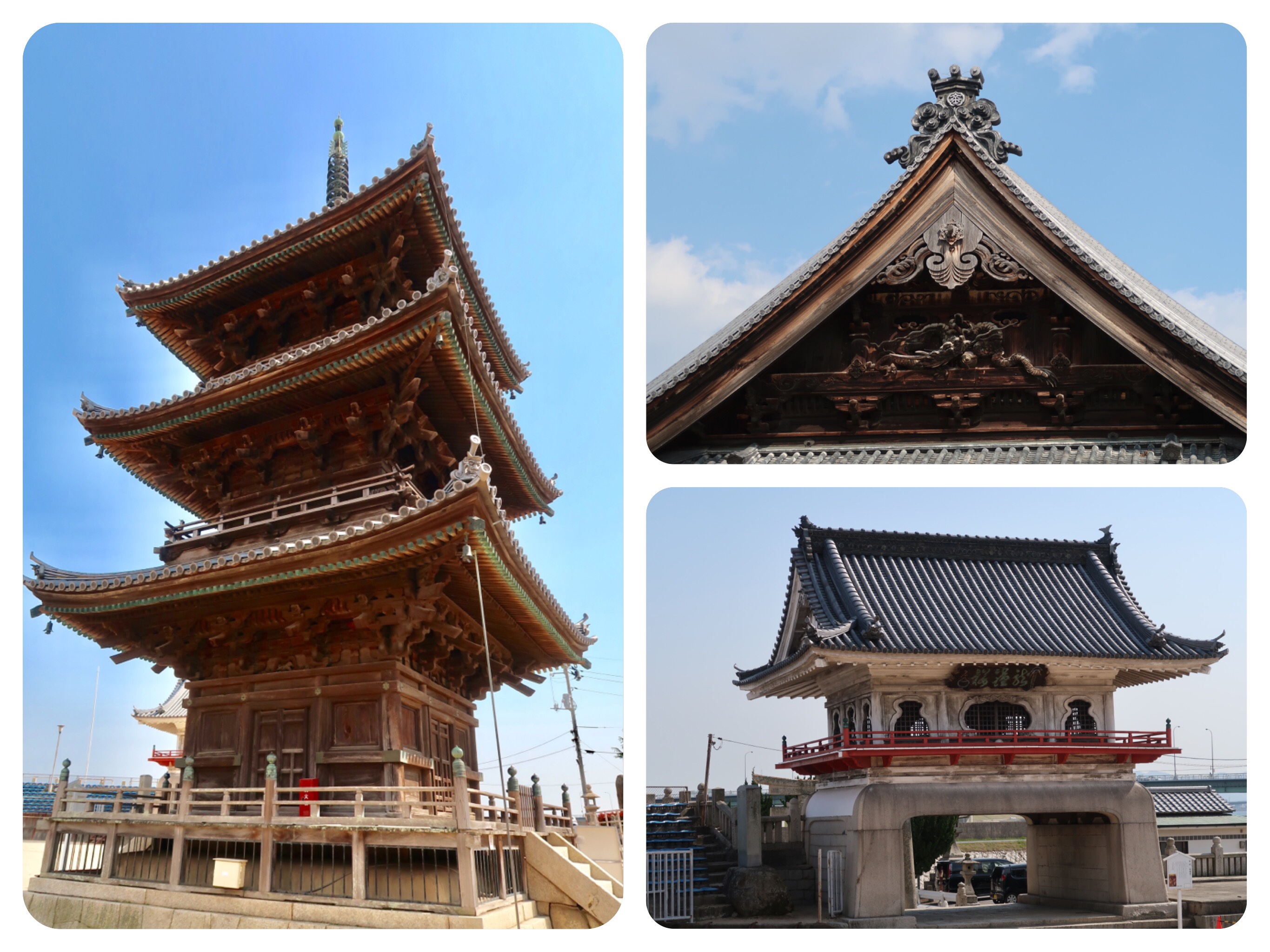 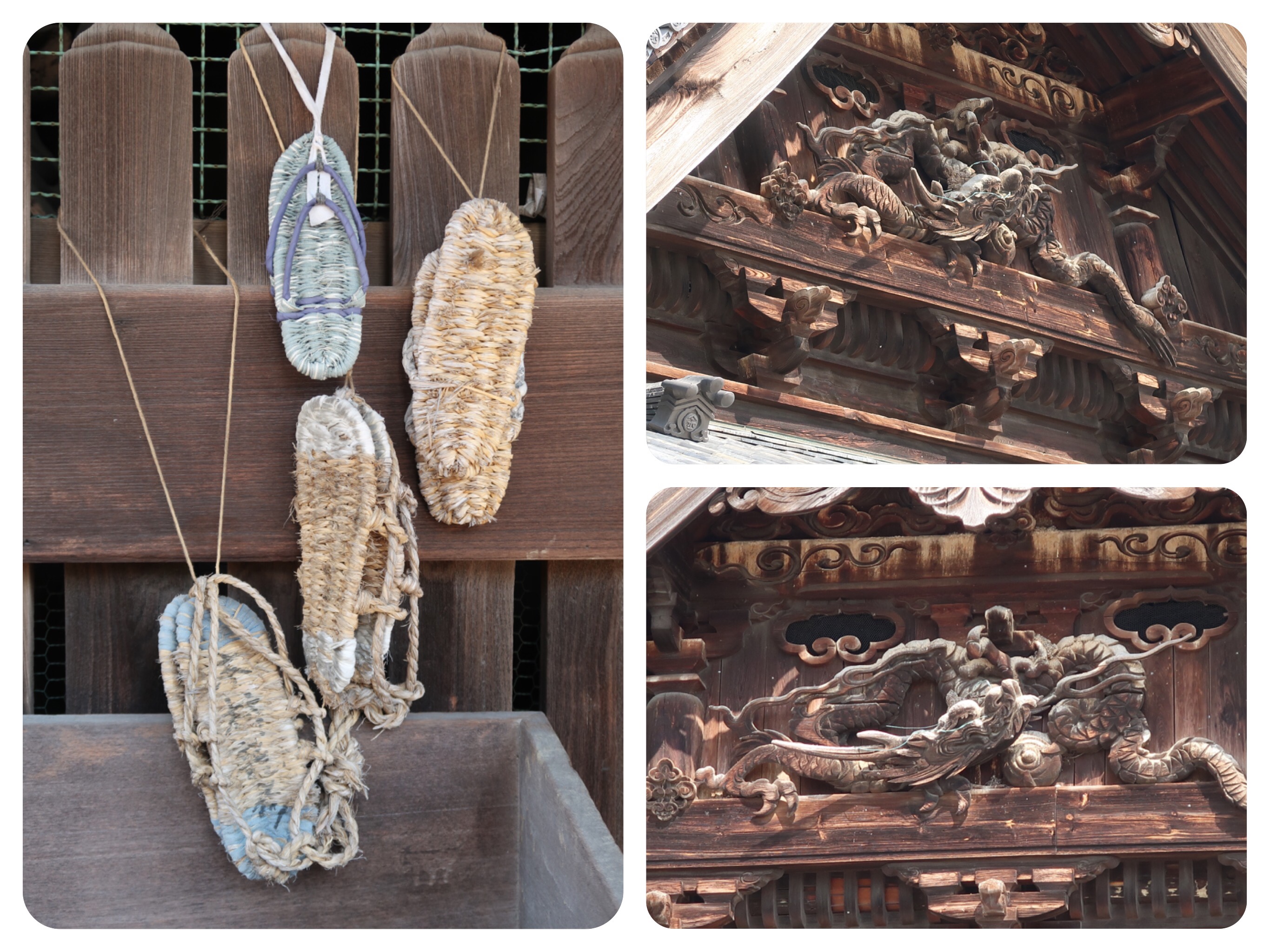 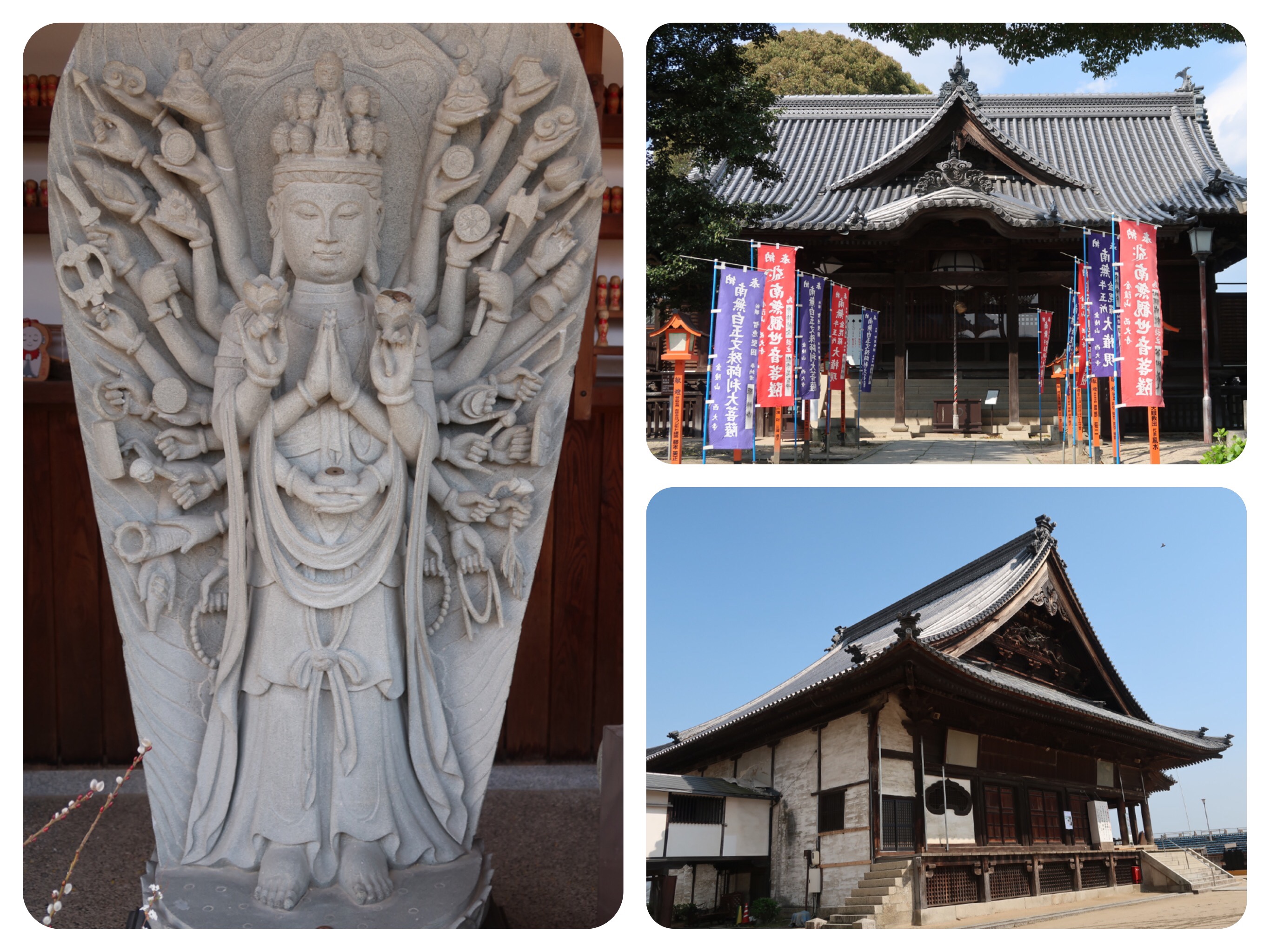 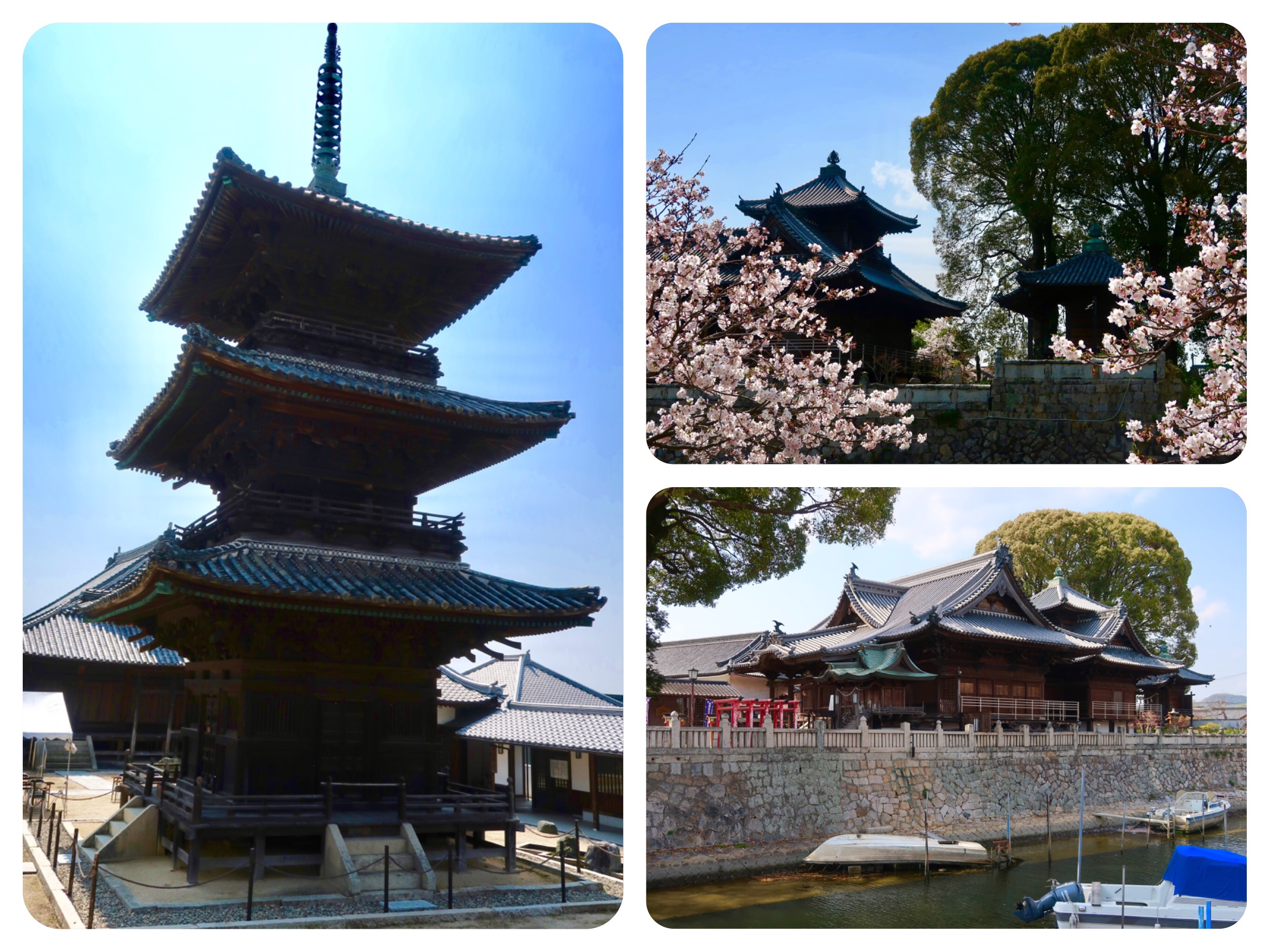 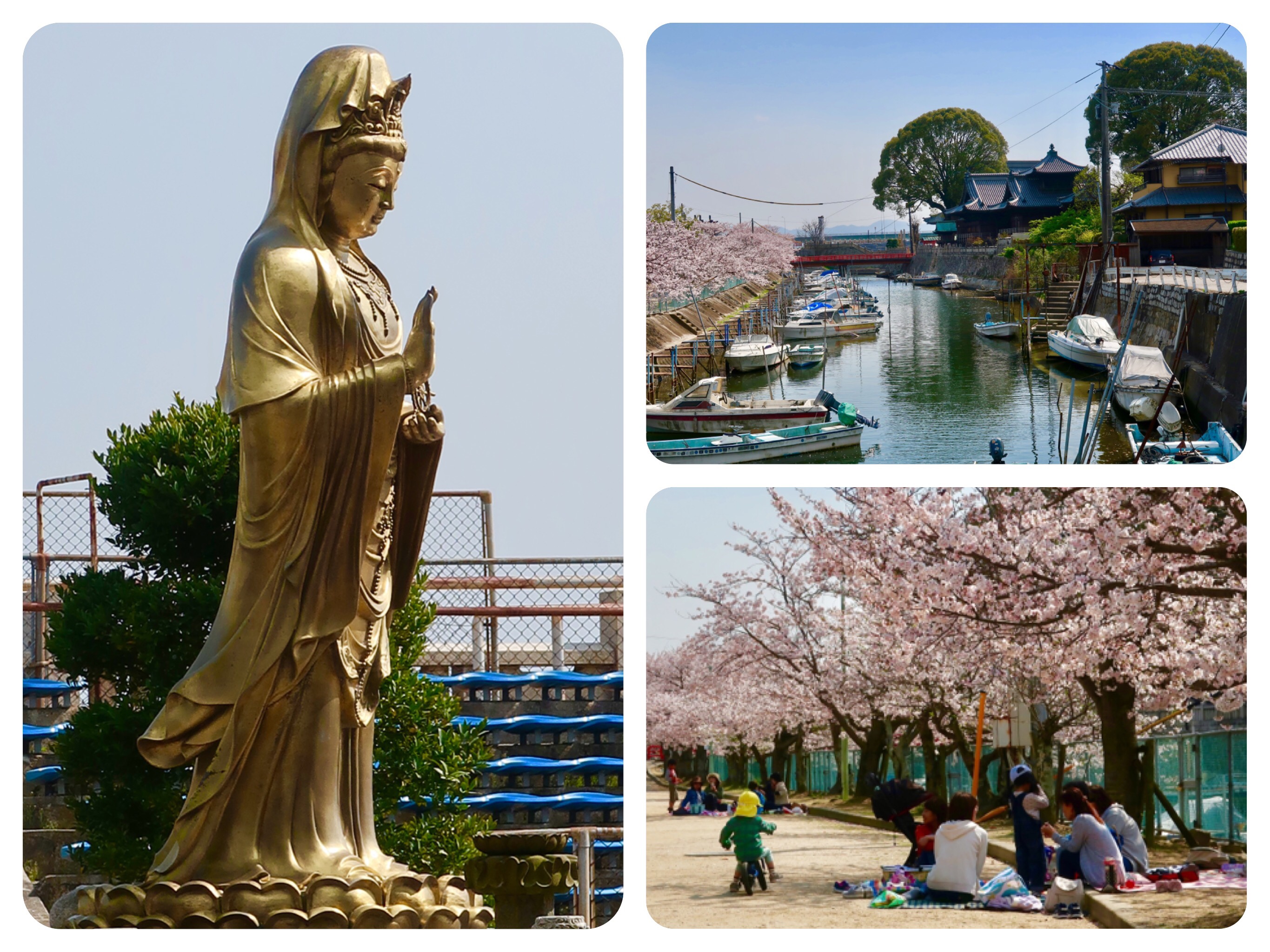 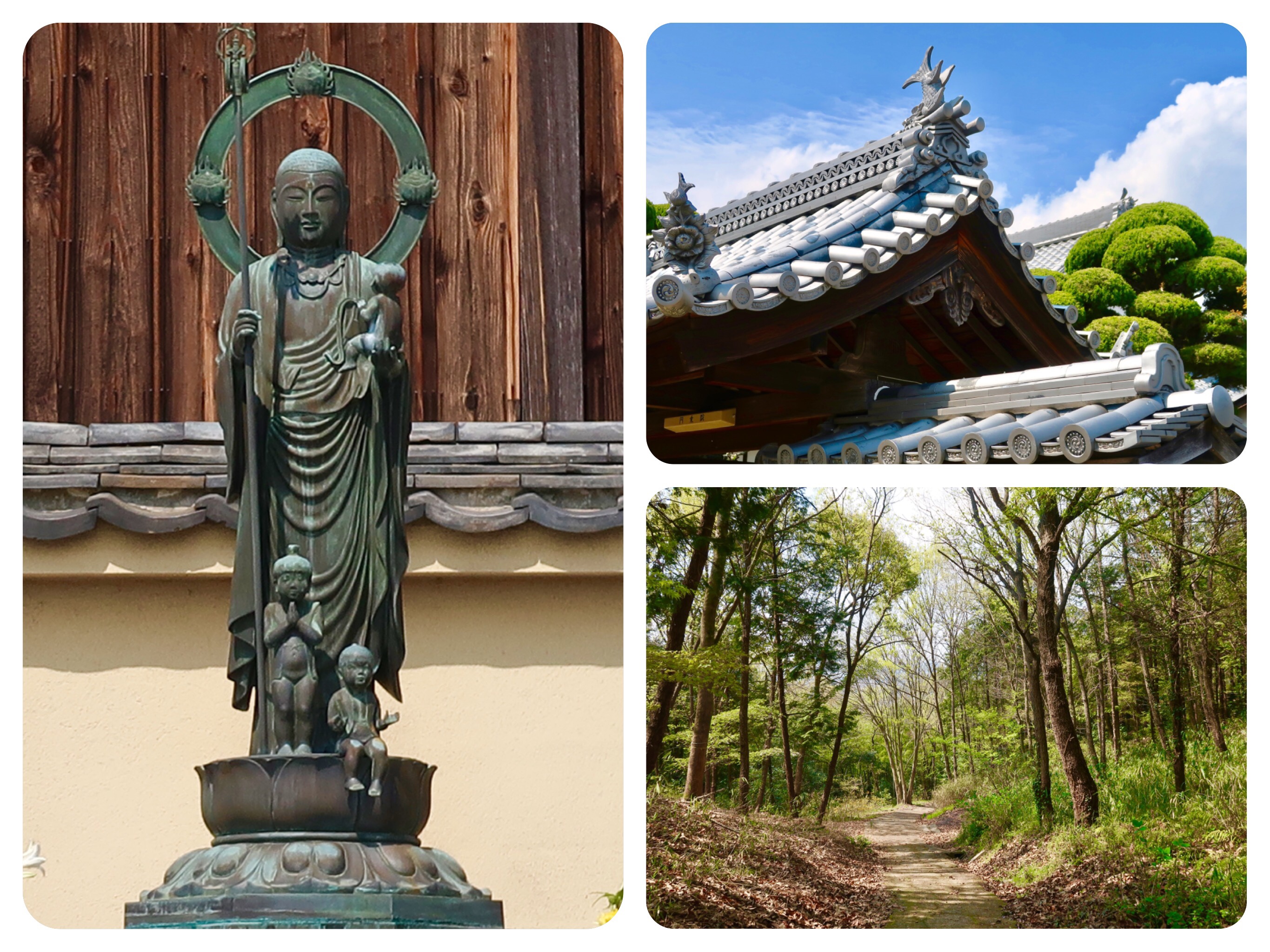 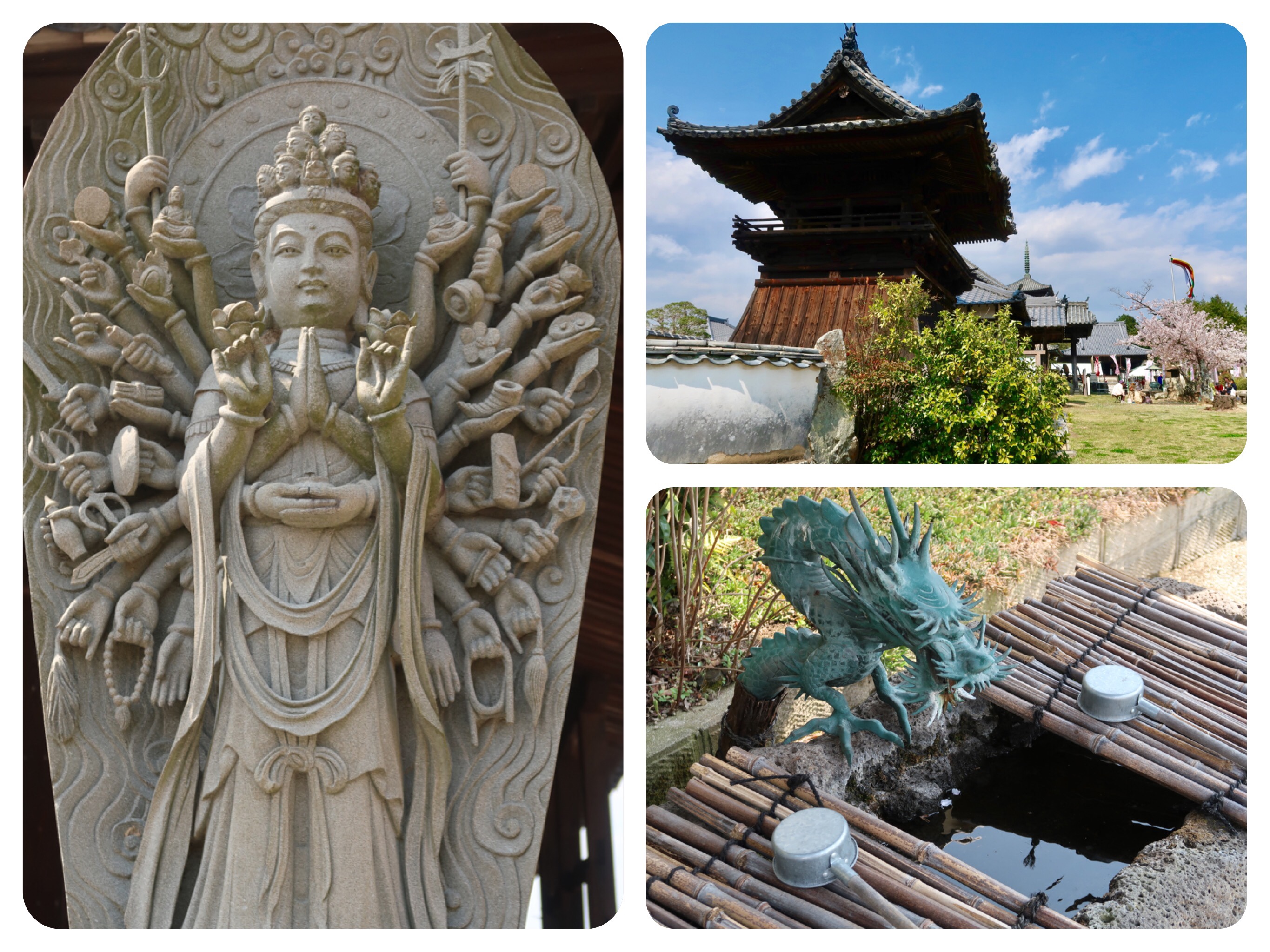 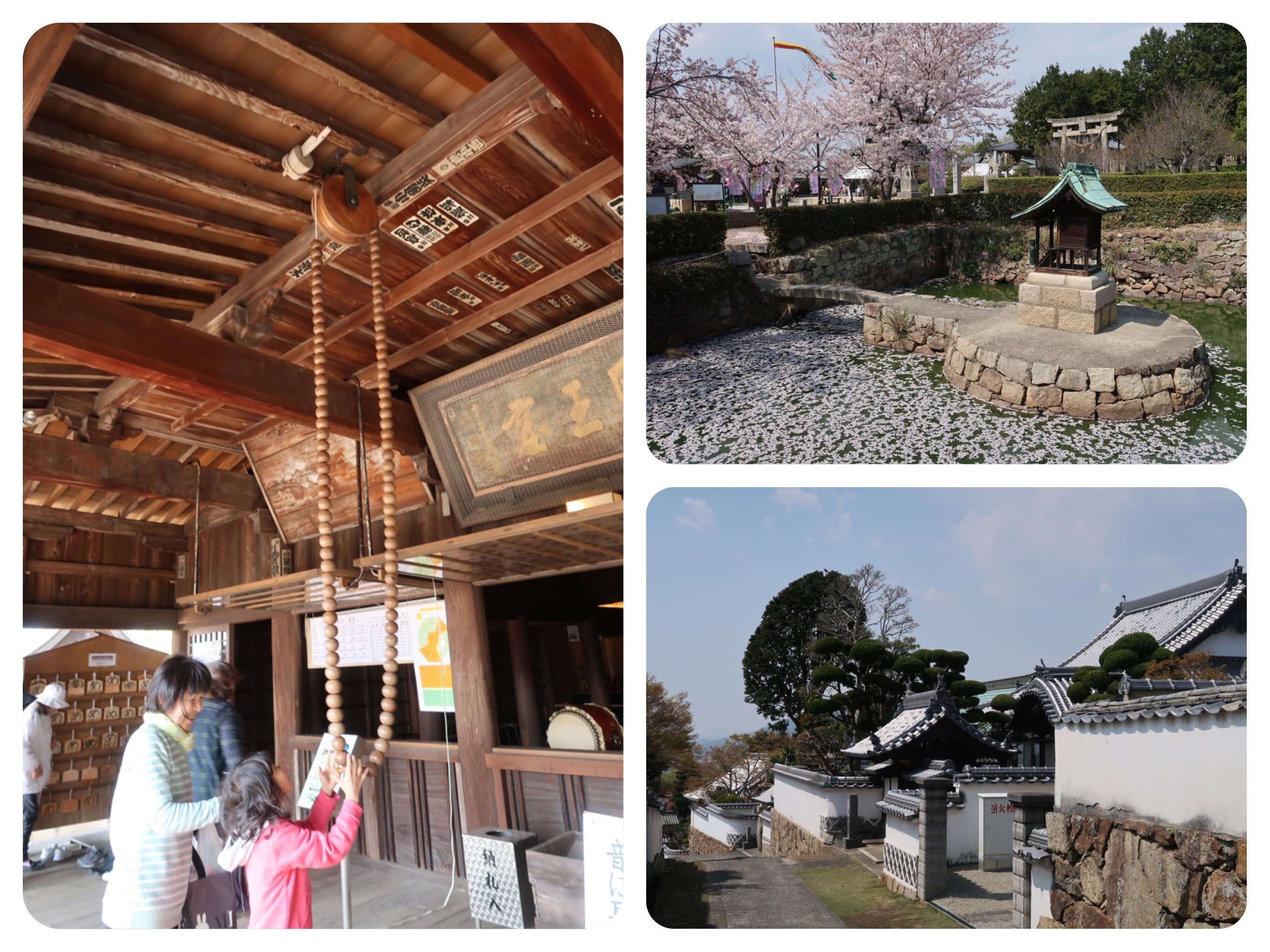 Last night, when I got up to pee, my knees felt so stiff I had to balance myself while I waddled to the toilet.
I felt compassion for all those with knee pains or mobility issues.
It is so hard to live in this world without being able to move freely.

But I was determined to soften my mind, let eternal love FLOW through me, and become less rigid and more gentle, like a FLOW-ER, and walk the pain right out of my mind.

We got up early, had a nice breakfast, checked out of our hotel in Himeji, and took the train to Okayama.

Our plan was to leave our backpacks at our hotel in Okayama, and then take the train back to Osafune station, where we had finished walking last night.

When we checked into our hotel in Okayama, we asked if it might be possible to leave a small bag for safekeeping, while we walk the pilgrimage.
Even with all our careful packing, we ended up with too much in our backpacks.
We thought to cut back drastically on the weight we carry, in order to ease the pressure on my knees.

The clerk was friendly, but after consulting her boss, she came back and told us that the hotel policy was not to hold bags for more than a week.
So the answer was no.

I felt like crying, but a pilgrim must not be so pathetic, so I smiled instead.
I let whatever came up flow through me, without creating any resistance.
We will have to adjust to walking with the weight of the warm clothing we have in our backpacks, even as the season is warming up to a hot summer.
The same chain of business hotels in Tokushima on Shikoku, had been more than happy to keep a big suitcase for us for two months, while we walked the Shikoku Pilgrimage.

We took the local train back to Osafune station, and started walking southwest towards Yokeiji, temple number 2.
Surprisingly, my knees felt much better than yesterday.
We were still walking slowly and with a bit of a waddle, but it seemed like we would be fine.

I enjoyed the path today.
We walked mostly on small paths and between rice fields.
To get to Temple number two, we climbed up a small mountain, planted with a bamboo grove and cherry trees.

It was a very windy day, but the sound of the wind through the bamboo and the songs of the birds were very pleasant.

The temple complex spread out before us as we arrived at the top.
Many people were enjoying both the sunny day, and the beauty of the cherry trees in full bloom.

Two older ladies asked where we were from and if we had Buddhist temples like this one in America.
They then showed us the long string of large wooden prayer beads, hanging from the ceiling at the entrance of the Main Hall.
They said it is known to bless those who need healing of the eyes.

We took off our shoes and walked into the main hall, where we kneeled and prayed in front of the wooden statue of Yakushi Nyorai – The Medicine or healing Buddha.
I prayed for my sister and mother and for all those who need healing of all kinds.

The main hall was built in 1570.
The wooden statue of the medicine Buddha was created in the Heian period (794AD-1185AD)
It is 182cm tall and it was carved from a single piece of wood.

There are many other wooden halls in the temple complex, as well as a pagoda, a bell tower and other beautiful sculptures.

A statue of Kannon, or Kuan Yin, wearing a tubular crown, also dates back to the early Heian period.

The original triple pagoda was burned down in the Genpei Japanese civil war era (1180–1185), and was rebuilt in the late Edo period, in 1815.

The eleven-faced Kannon statue was carved from Zelkova wood, and the lovely and serene face of the Goddess was made in the late Heian period.

At that time, using the rare and sacred Zelkova wood to create the sculptures, instead of the more abundant cypress wood, was an attempt to make the sculptures sacred and holy.

We were offered hot tea by some women volunteering under the beautiful Sakura trees in the temple grounds.

After saying our prayers, we got our book and scroll stamped and made our way down the mountain toward Saidaiji Temple, temple number 1 of this pilgrimage.

It was a nice walk through fields on very narrow roads, mostly used by school kids on bicycles.

It was time for lunch, and Google map showed that there was a bakery nearby.
The bakery was actually a big commercial bread factory, but they had in the parking lot a food truck that was set up as a tiny shop, selling freshly baked products.
We chose small buns with black sesame seeds on them, and sat to eat this delicious lunch on a wooden table by the truck.

We chose to approach temple number one from the river.
We walked by the river which had small boats and a row of blossoming cherry trees along its shore.
We crossed a red bridge and entered into the vast temple courtyard.

Saidaiji Temple 西大寺, Temple 1
The ancient temple was built around 1,200 years ago.
Although normally it is a quiet place, the temple is the site of great excitement every year on the third Saturday of February during the Saidaiji Temple Eyo, a Festival commonly known as the “Naked Man Festival.”

This festival, famous as one of Japan’s three oddest festivals, features about 10,000 fortune-seeking men wearing nothing but a fundoshi (a traditional Japanese sumo loincloth) as they grapple excitedly for two shingi, or sacred wooden sticks, which are dropped amongst them by the Temple monks.

Those who prevail in the fierce competition are called “fuku otoko,” or lucky men, and are promised a year full of luck and good fortune.

The history and origins of the temple are shrouded within a beautiful story.
In the mid-8th century, there lived a noblewoman named Minato Fujiwara.

She was a fervent believer in the Goddess Kannon, and her greatest wish was to have a statue of Kannon in her house, but she was unable to find anyone who could carve one for her.

One evening, a traveller came to her door and asked for a place to stay for the night.
He wouldn’t give his name but said he was a priest and woodcarver from Hasedera, an important temple near Nara, that was a well known center of Kannon worship.

At that time, Nara was the starting point of the Saigoku Kannon Pilgrimage, one of the oldest pilgrimages in Japan.

Unable to believe her luck, she begged the man to carve a statue of Kannon for her, and he agreed.
He placed one condition, that he would work in a private room, and that no-one would enter nor even look into the room.

She agreed.
For a few days all went well, and sounds of a hand held chisel chipping away at the wood, were all that was heard from the carver’s room.

One night, as she walked down the corridor outside the room where he was working, she heard voices and a conversation taking place inside the room.

Her curiosity was aroused.
She was thinking that he might have invited guests, so she peeked into the room and saw the priest having a deep conversation with the statue.
The Kannon wooden statue was participating in the conversation, just as if it were alive.

The stunned woman was unable to hold herself back, and with wide eyes she asked, “Is this Kannon statue your body?”
The Buddhist priest answered, “I have no body and no birthplace, these are only temporary residences.”
Then he disappeared, leaving behind the statue, still unfinished.

Minato managed to convince herself that the man had in fact been a manifestation of Kannon, and she resolved to take the statue to Hasedera Temple.

Travel in those days was mostly by boat, so she set off along the Inland Sea towards Nara.

At the time, her husband was on an official business trip in Bizen, the old name for what is now southern Okayama, and so she stopped her journey there to visit him.

When it came time to depart and continue her journey, a strange thing happened – the boat simply would not move; no matter what was tried, it would not budge.

Eventually the statue was unloaded and then suddenly the boat began to move.
This was taken to be a sign that the Kannon statue wished to stay in this place, and so she had a small hut constructed to house the statue.

This story was told and retold many times, and people came to worship and see for themselves this miraculous statue.
It grew to become Saidaiji Kannon-in Temple.

From the temple, we walked towards the next temple in Okayama.
By the end of the day, even old ladies were able to pass us, as we waddled on the footpaths.

We decided to walk until 6:30 PM, which is sunset time, and then take the train to our hotel, and continue walking from that same train station, tomorrow morning.

After hours of walking, I really wished to rest my feet in a cafe.
Where are all the coffee houses in the city when you want one?
Finally we arrived at a lovely cafe, run by an elderly mother and her daughter.

It was refreshing to sit and have a warm drink and a snack.
I felt rejuvenated after our half hour’s rest, and we continued on to Takashima station, where we took the train back to our hotel.

We were too tired to go out for dinner, so we bought some delicious brown rice balls (onigiri) from a small shop specializing in Onigiris by the station.
We ate them in our room as we waited for the washing machine to finish washing our laundry.

Surprisingly, we did not fall asleep right away, but were energetic until midnight.

Wishing you a blessed day/night,
Tali