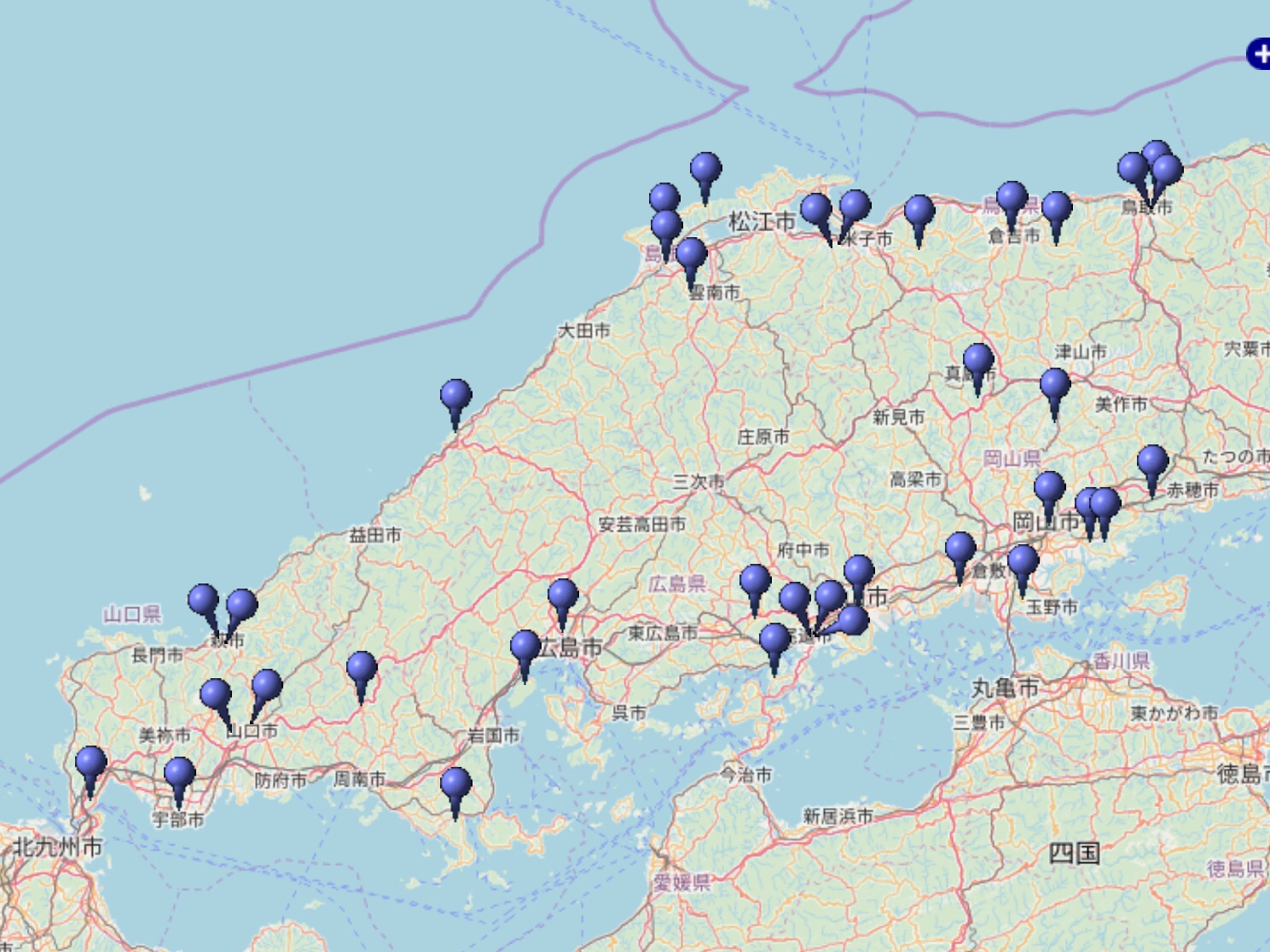 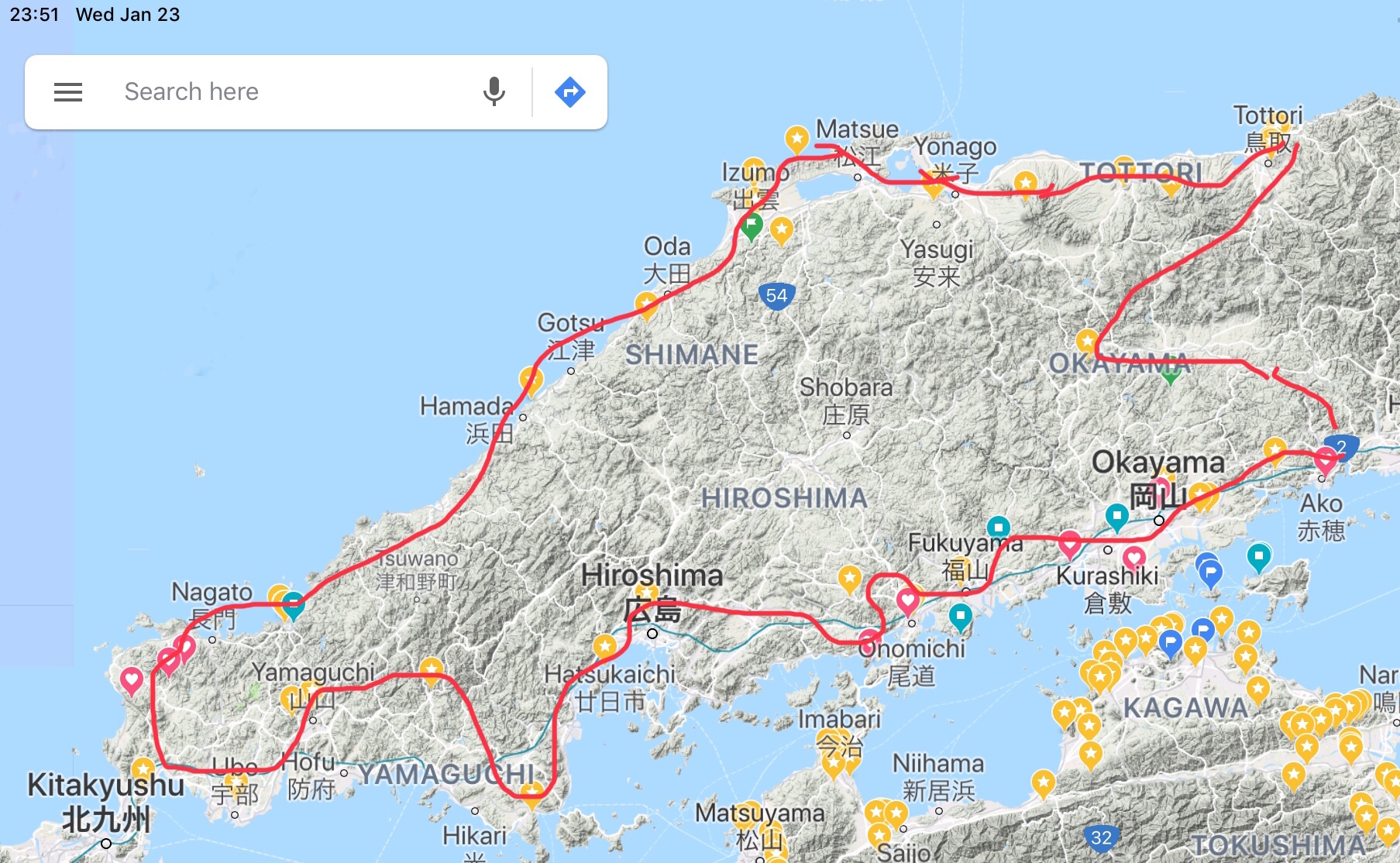 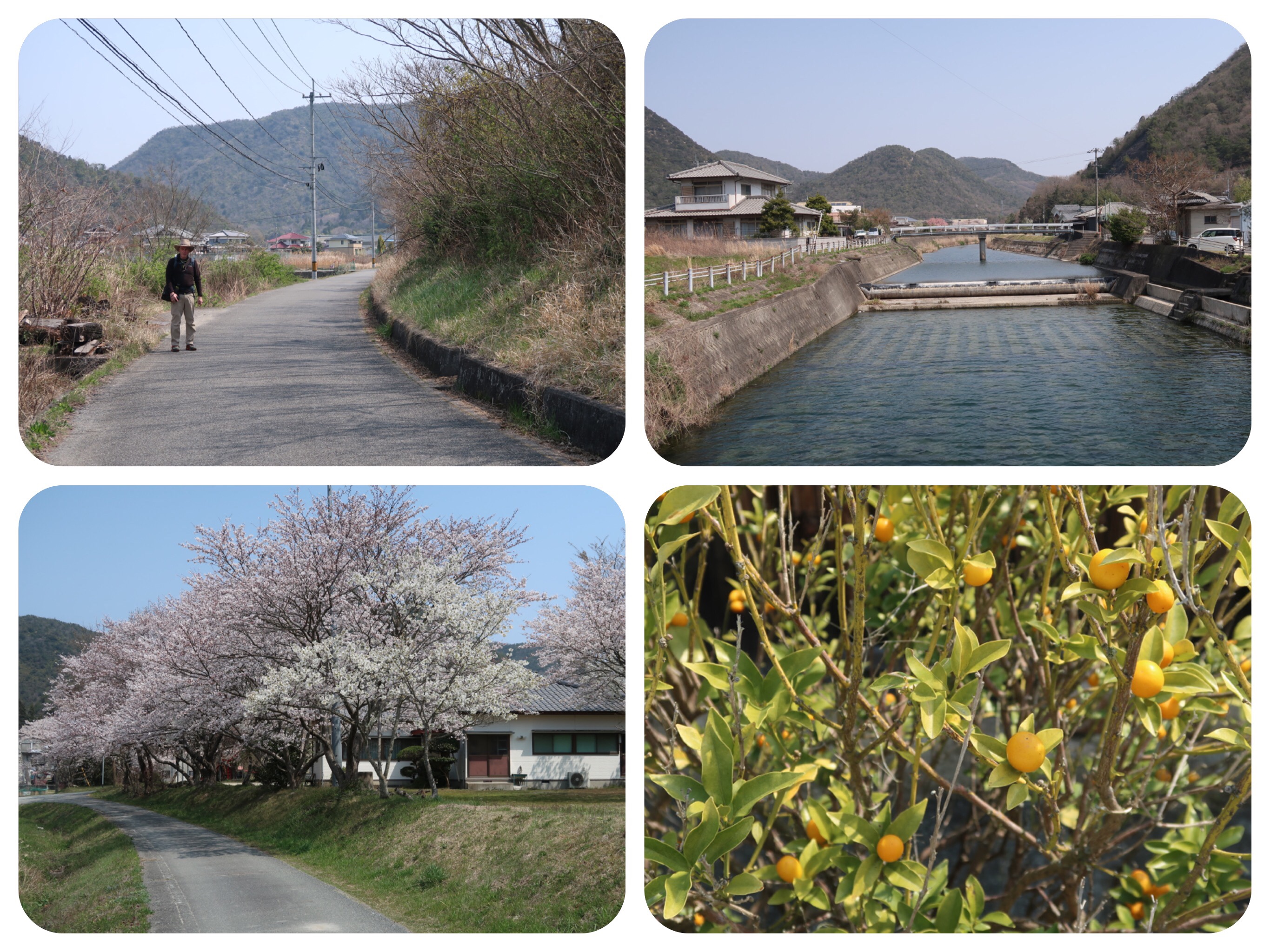 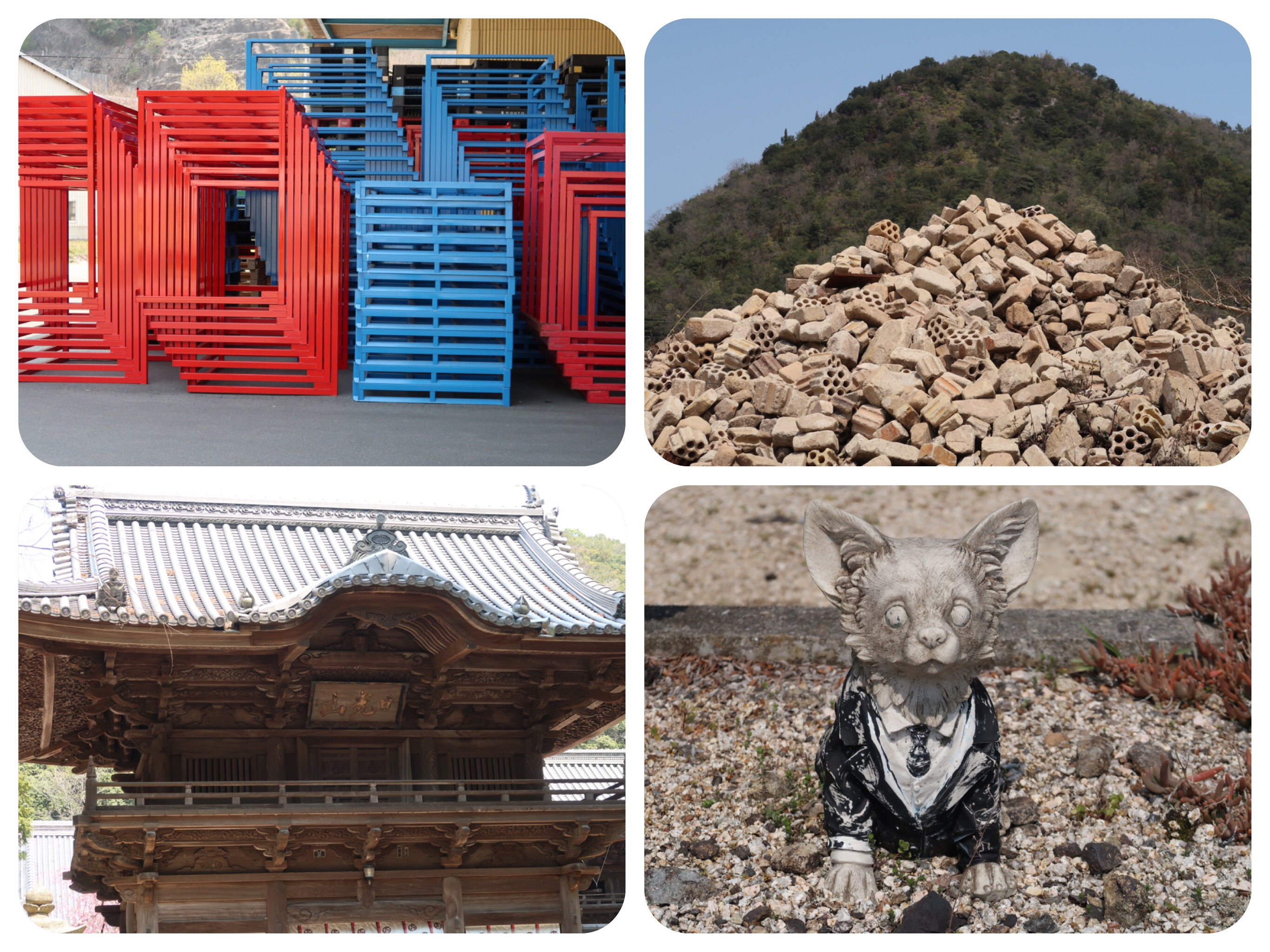 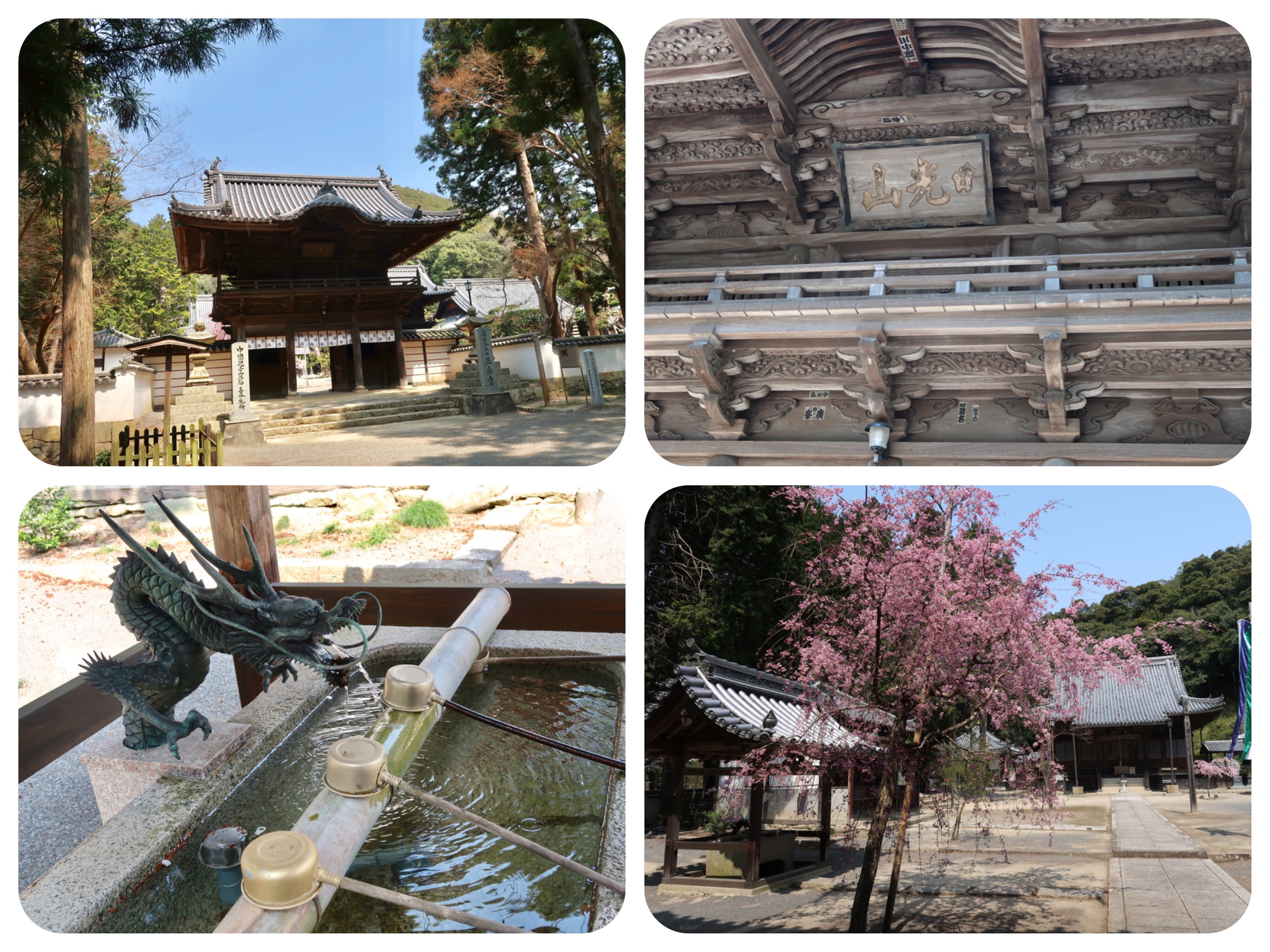 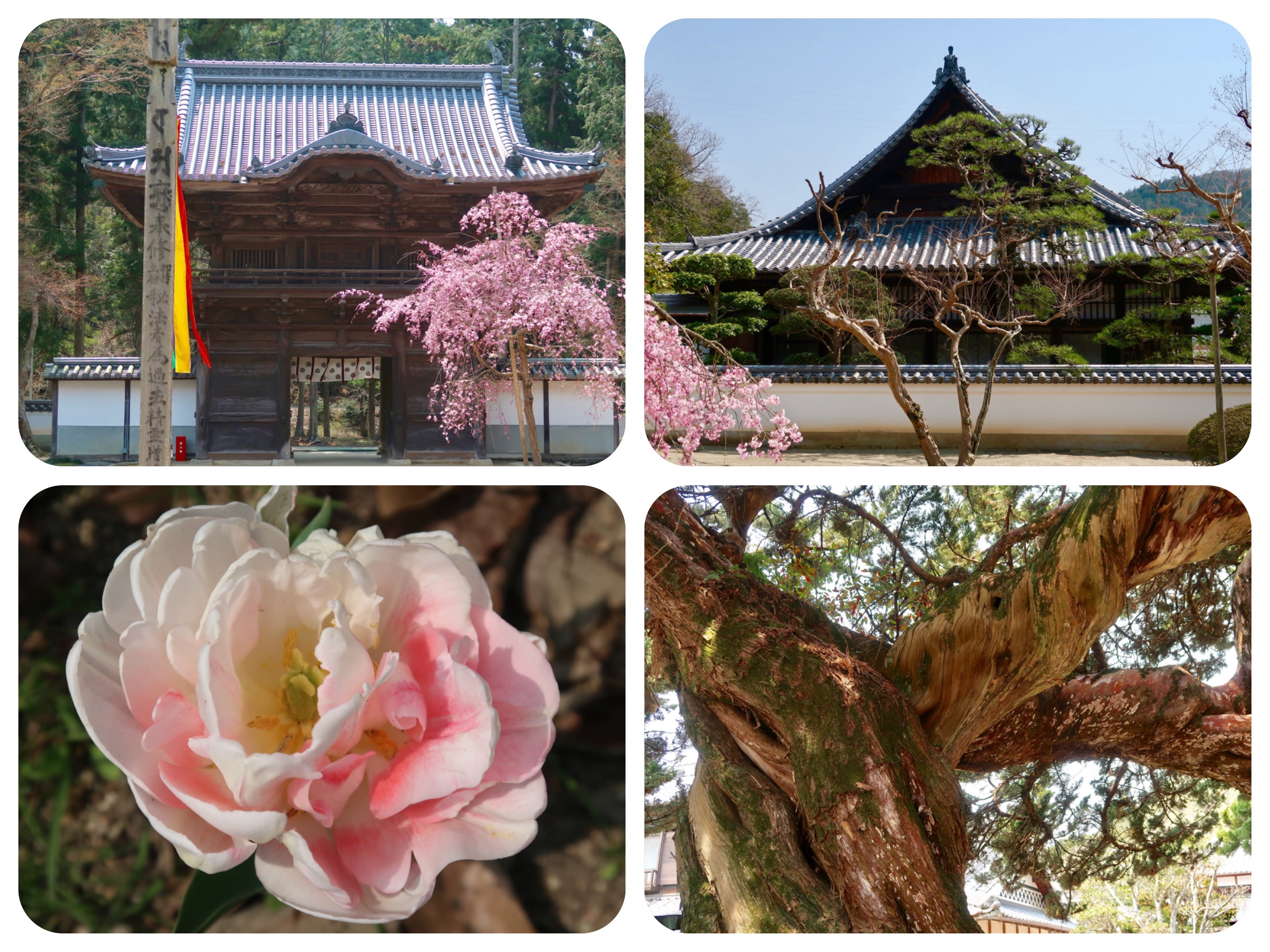 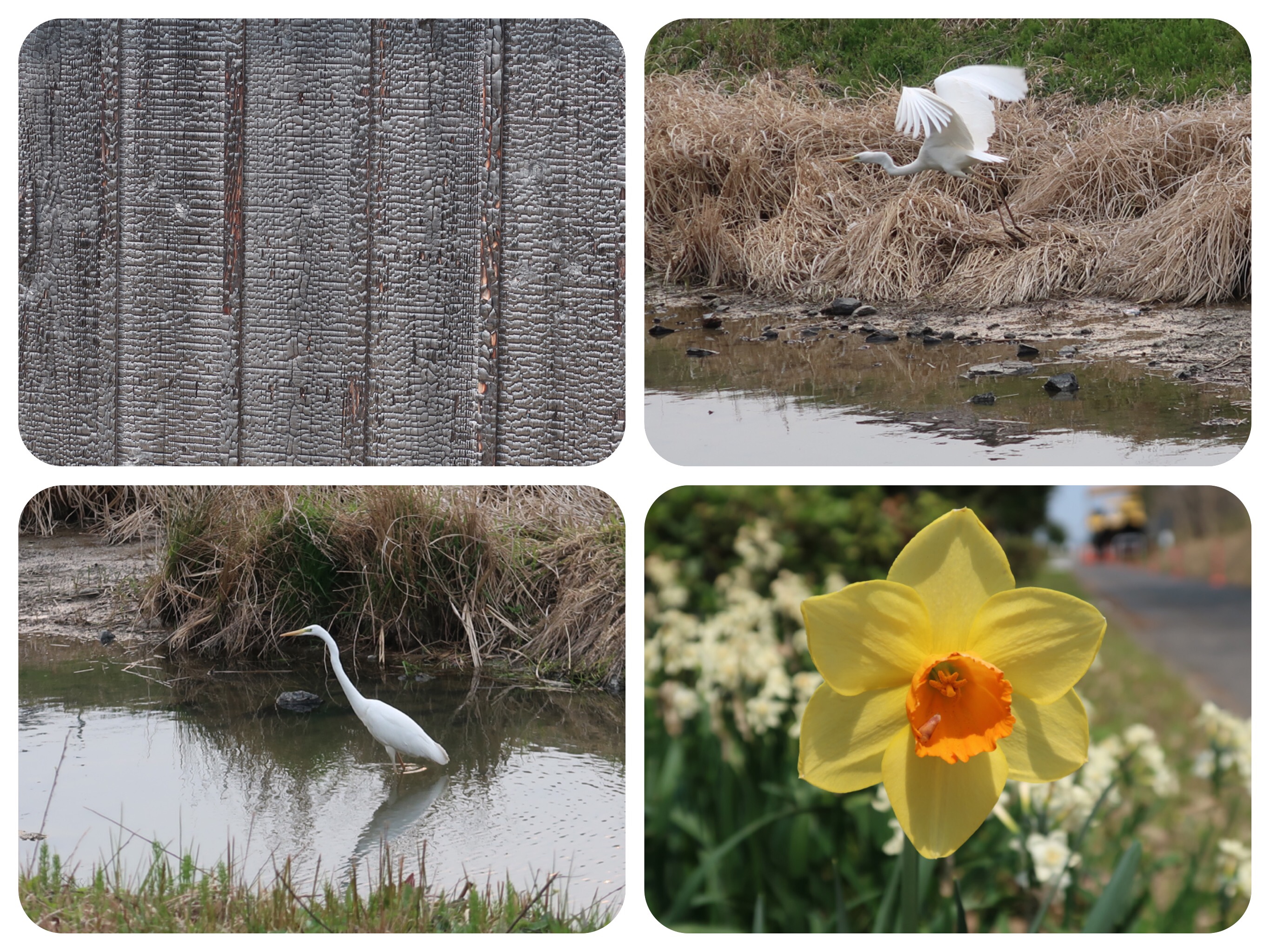 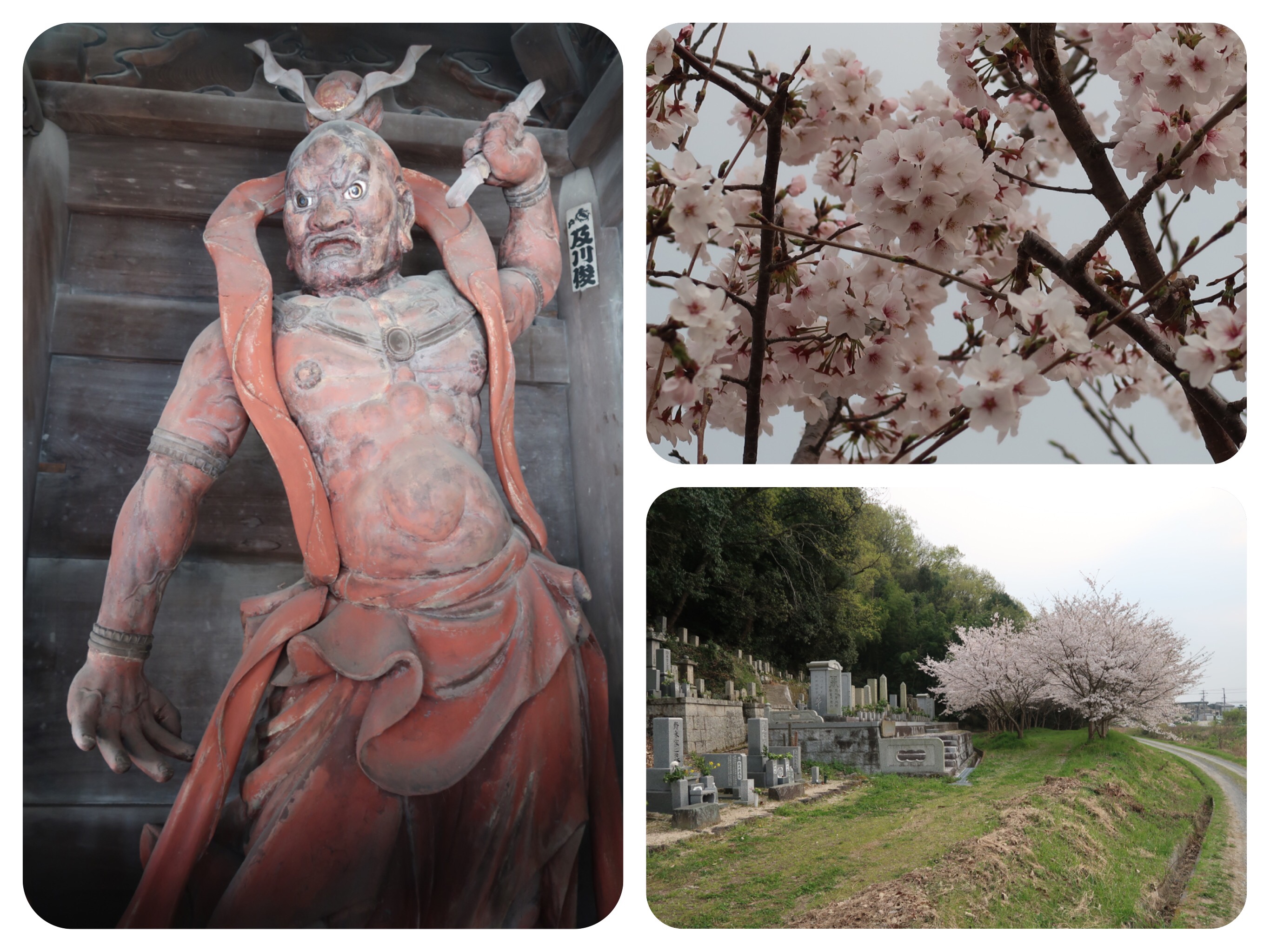 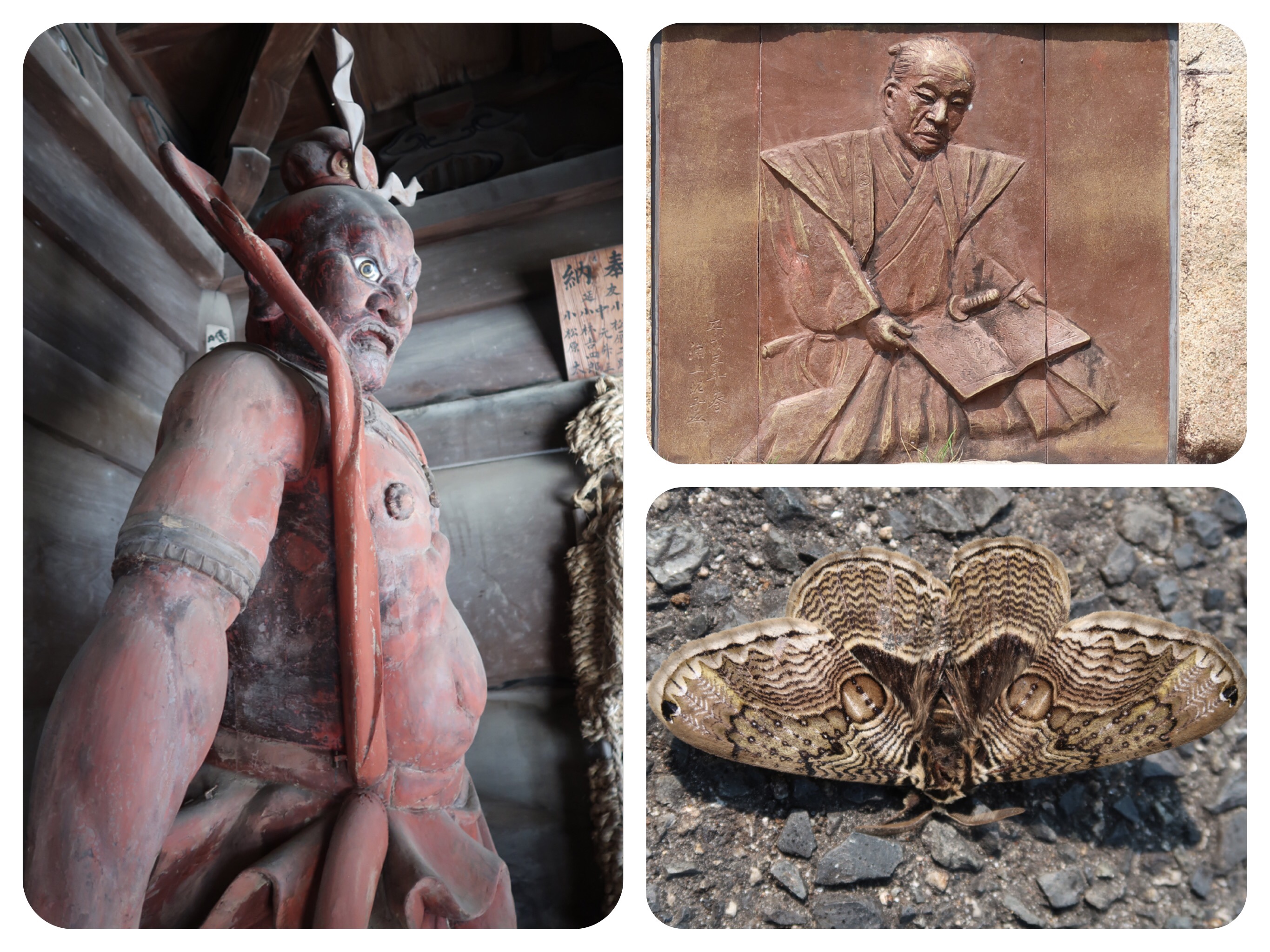 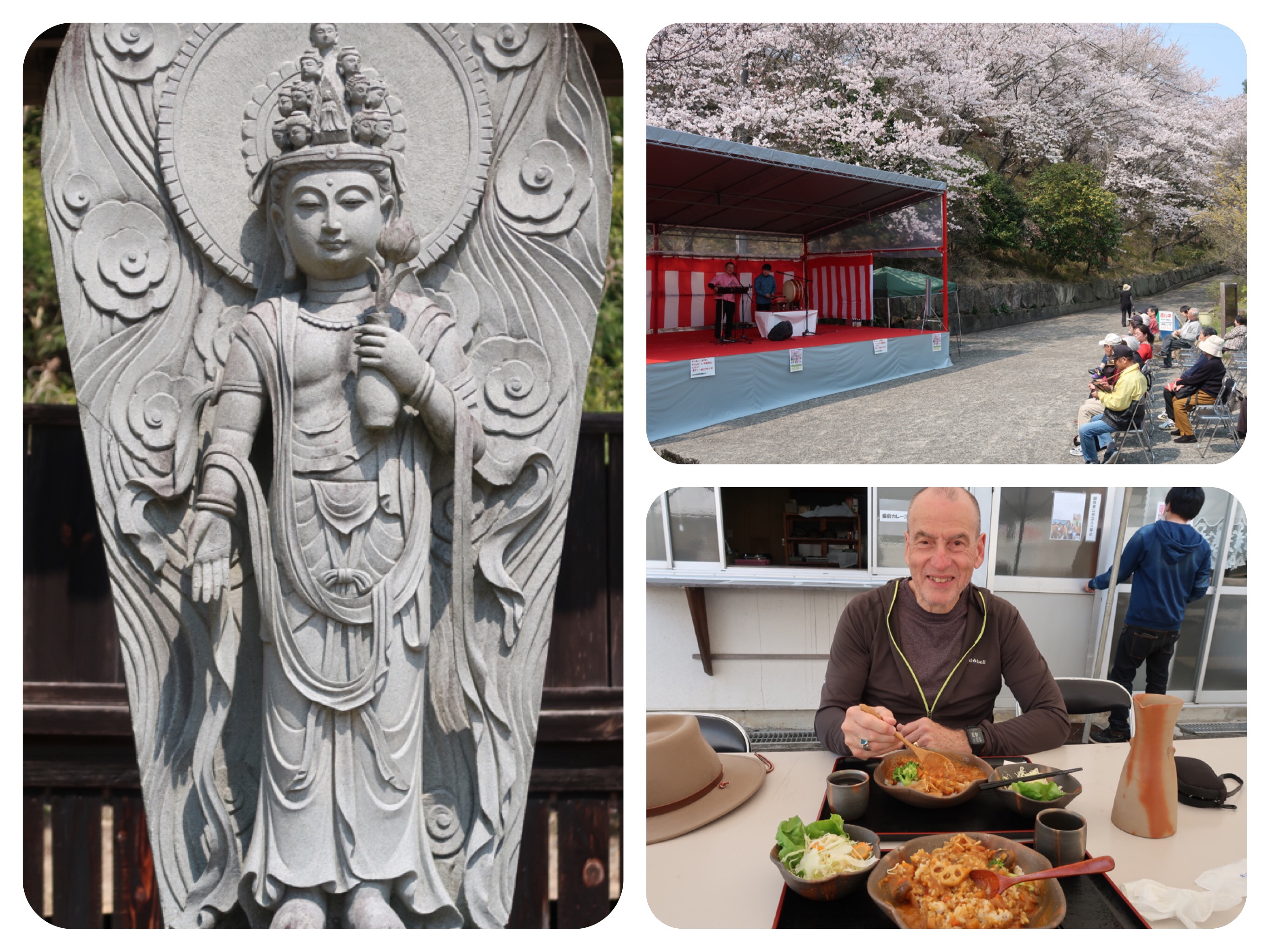 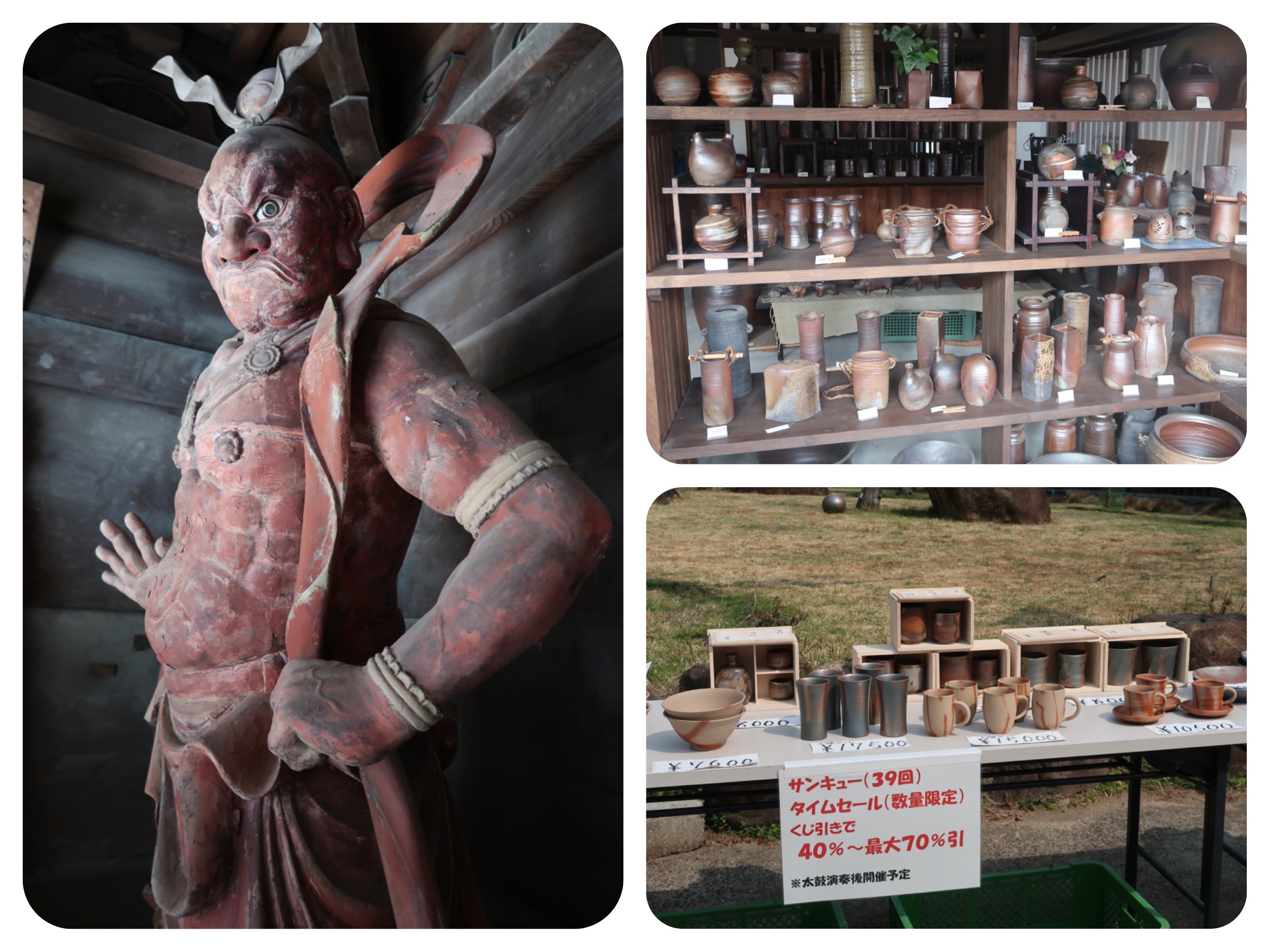 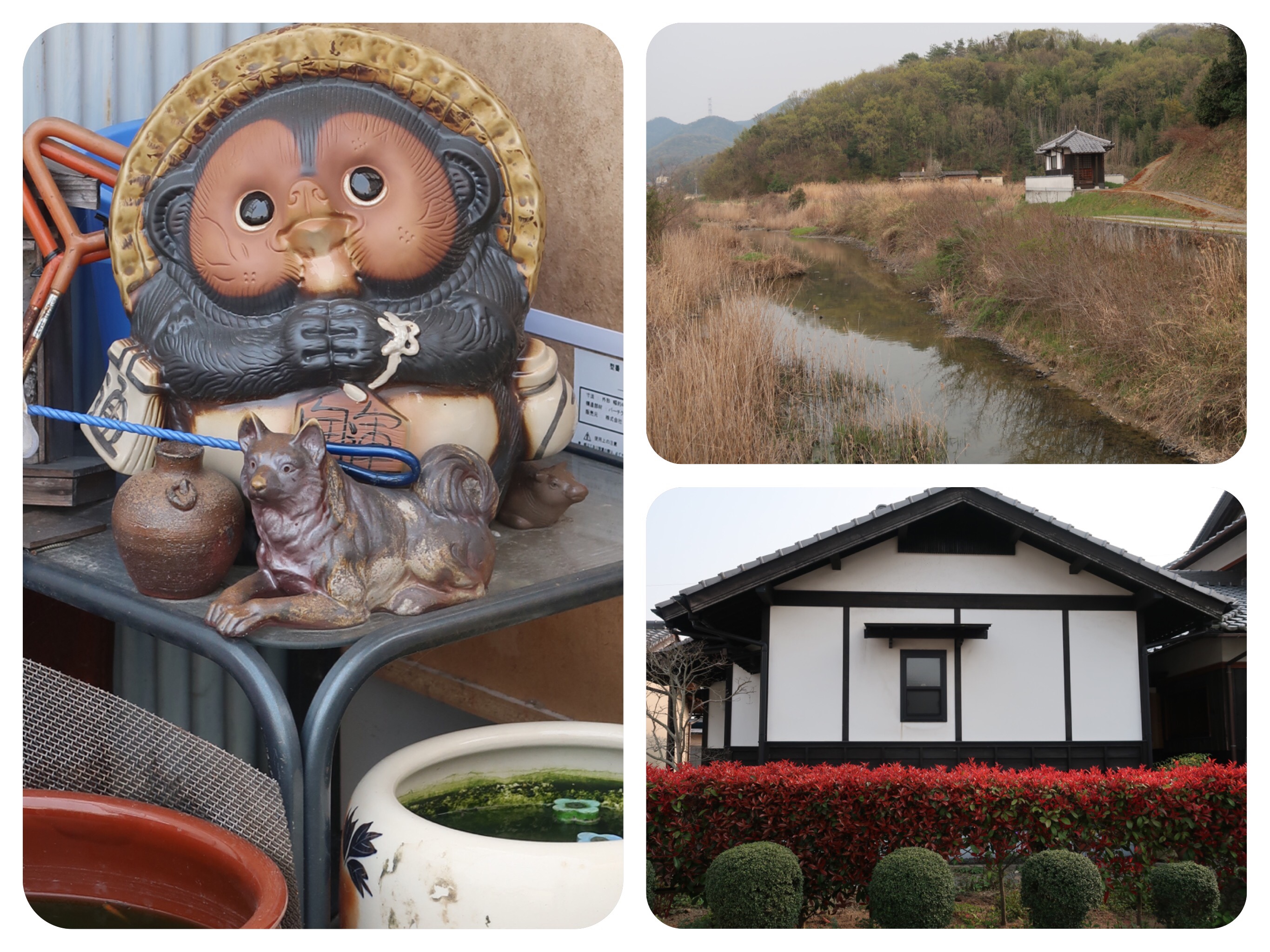 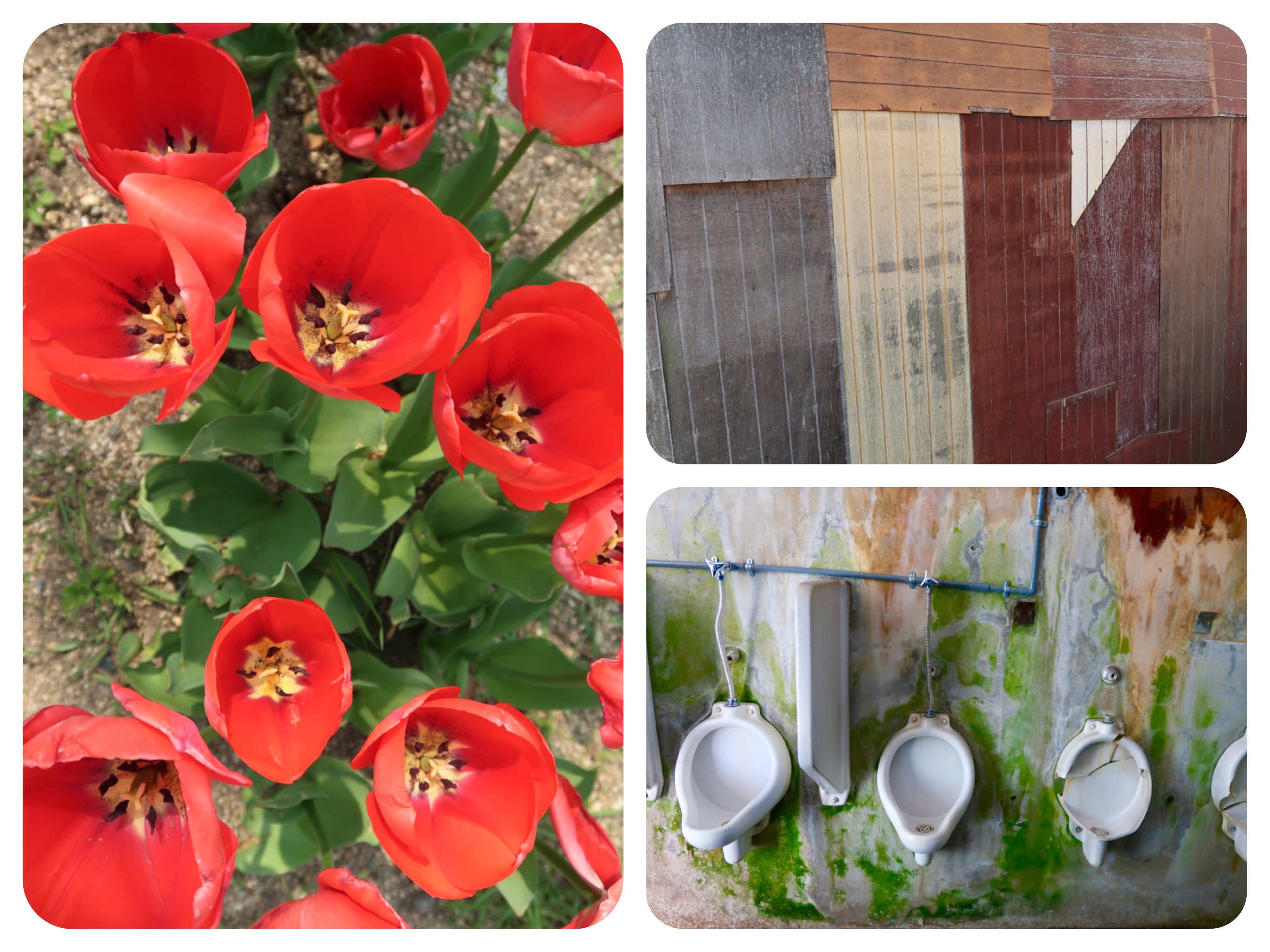 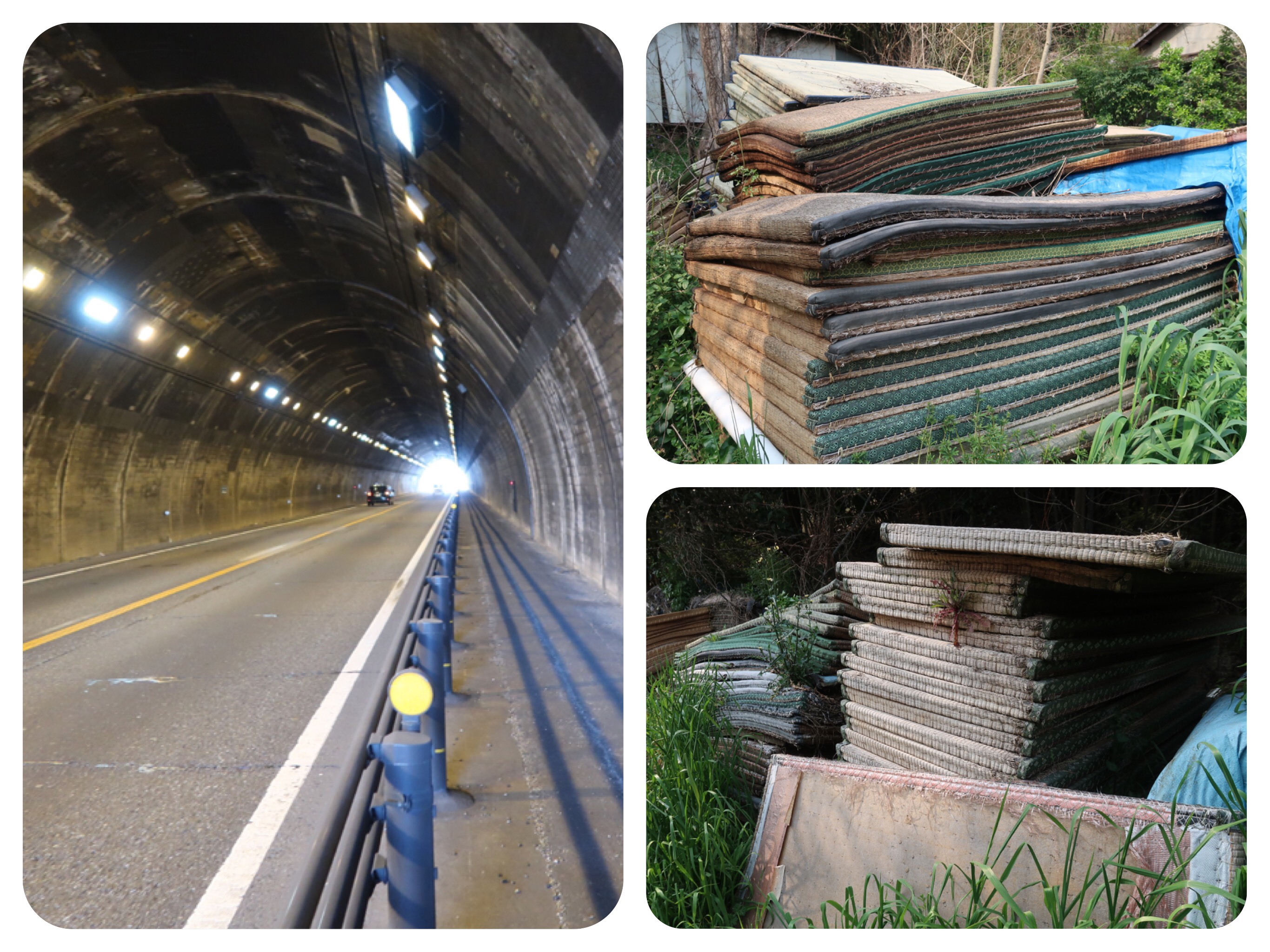 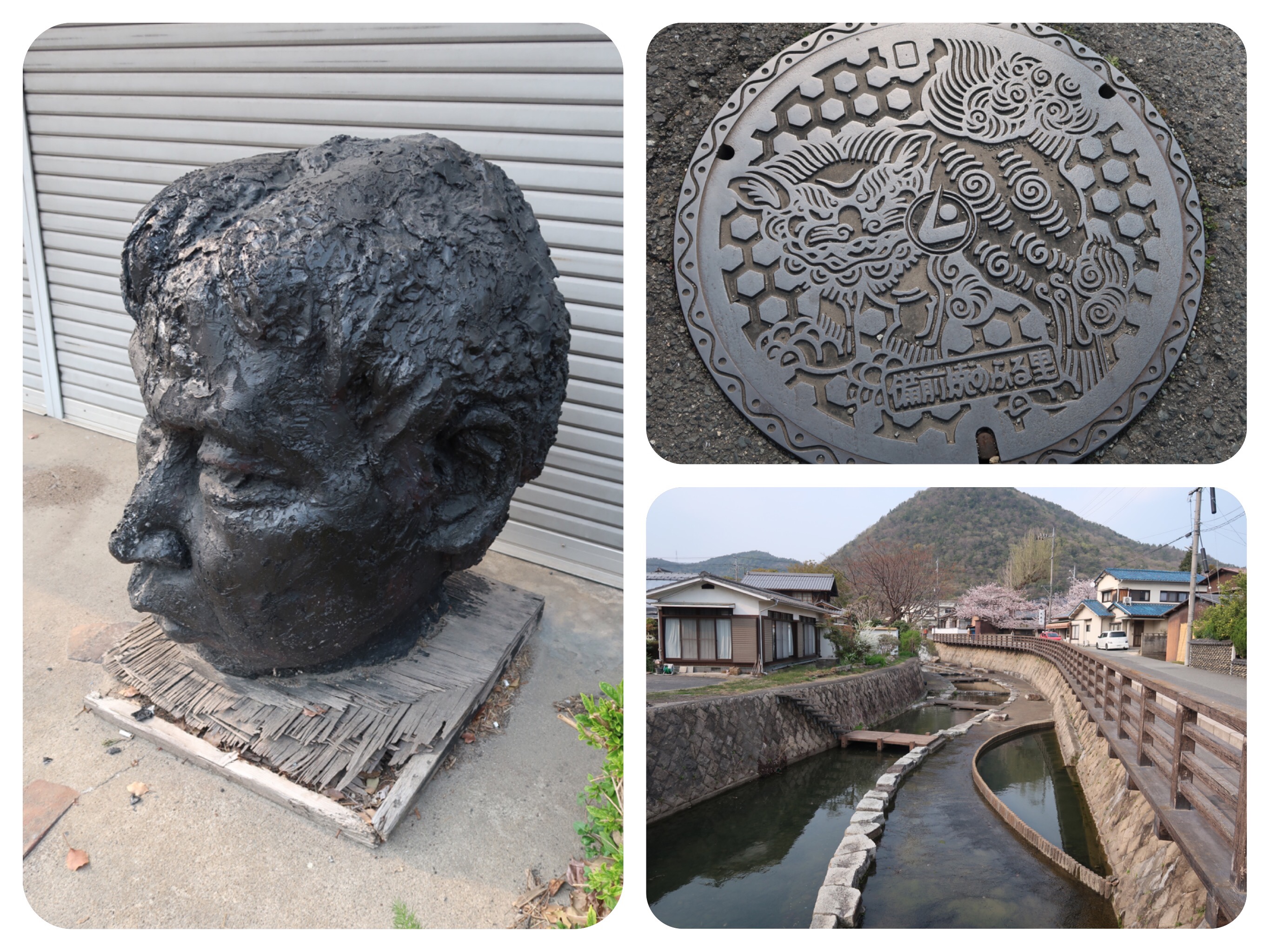 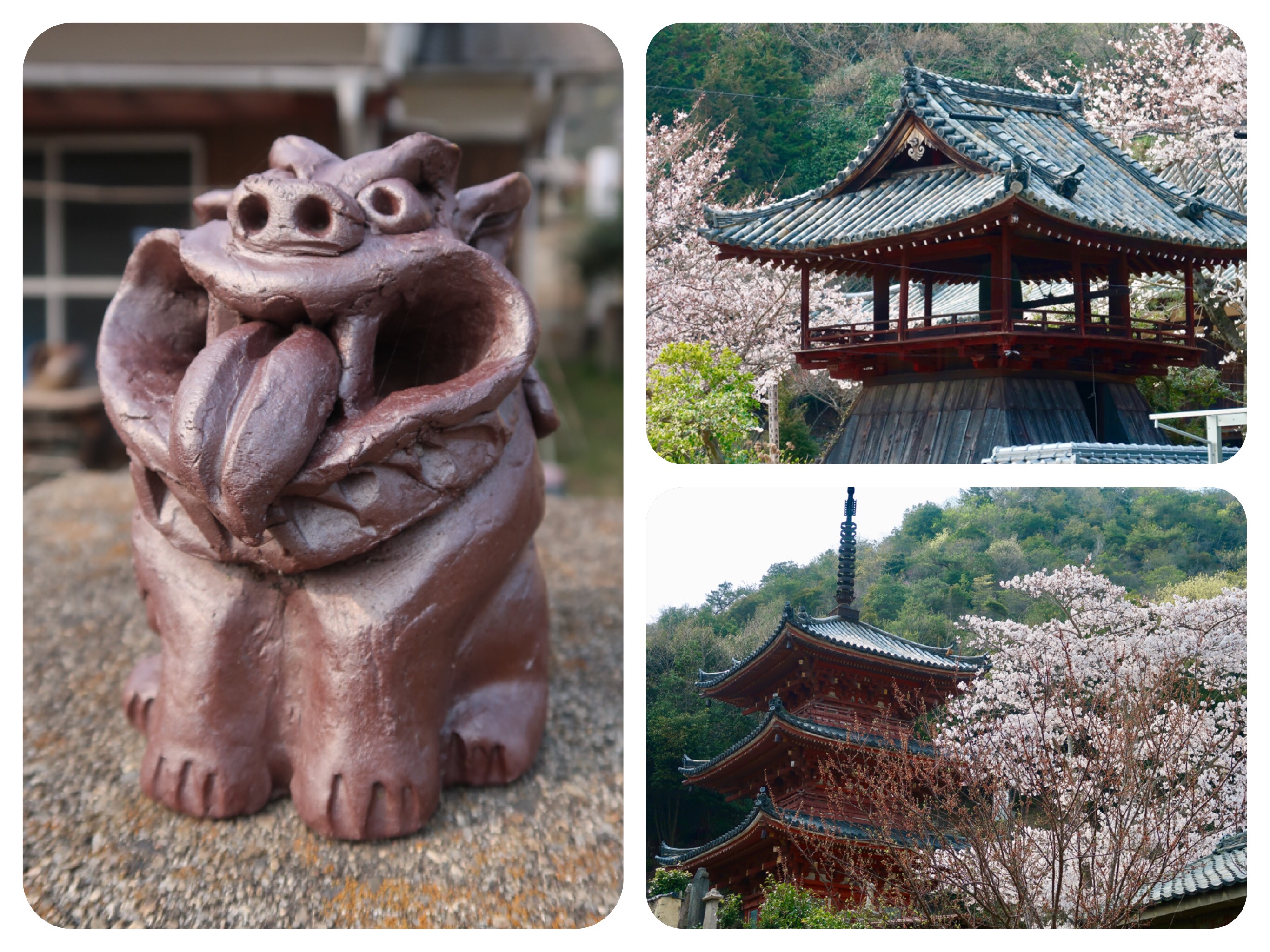 Today was the first walking day of our pilgrimage.
It was a really challenging day for us, but especially for me.

The weather was warm and mild, but the forecast called for a possibility of rain in the late afternoon, so we packed our light umbrellas and raincoats, and left our backpacks at our hotel in Himeji.
We planned to take a train back to Himeji at the end of the day.

We had a nice breakfast in our hotel of miso soup, brown rice mixed with millet with a variety of pickles, cooked daikon in soy broth, warm tofu with ginger, green roasted tea and slices of grapefruit.
I ate joyfully because the map of our route today did not show any convenience stores, restaurants or cafes for a long way, until we get to the outskirts of Okayama.

We decided to start our pilgrimage not at temple number one, but in Bizen, where temple number three, Shorakuji Temple (正楽寺) is located.
This is because we were coming from the east, and Shorakuji temple is the most easterly temple of this pilgrimage.

To get there, we took a train from Himeji to the nearest train station (called Iri) and walked along the narrow rural roads to the temple, which is not located near any bus or train stop.

Almost immediately after we started walking, I noticed that my knees felt hard, inflexible and achy.
I was surprised.
I usually do not have knee pain.

In order to practice walking before the pilgrimage, we tried to walk as much as we could while staying in Boulder Colorado, while we were in Kobe and in Himeji.
We walked 16-20 Kilometers every day, and I had no problem with my knees, yet now they felt achy and stiff.

I was baffled.
The thought of my mother came to my mind.
She is experiencing pain from arthritis in her knees, could I have somehow developed sympathetic pains in my own knees?
Why do I have knee pains and stiffness all of a sudden?

On the airplane coming from Denver, I sat next to a Japanese woman who lives in Utah.
Despite never having met before, we shared so much in common.
We both talked about our love of the Rocky Mountains, about ski season, about living with nature, and about Japan.
Then she told me that her elderly mother, who lives in Okinawa in southern Japan, is having pains in her knees, and is not able to walk much lately, just like my own mother in Florida.

But this pain in my knees was beyond me.
It felt real and very uncomfortable.

I started to feel worried.
If I am so achy and stiff now, walking without a backpack, how can I walk such a long and demanding pilgrimage?… can I make it on determination alone?
Will my knees heal and get lubricated as I keep on walking?
I was very worried.

Shorakuji Temple is located at the end of a small rural village, among tall trees below a forested hill.

The temple has in its main hall an old statue of the Goddess Kannon, with 11 faces.
It also has an impressive wooden gate, constructed in the year 1801, featuring some beautiful wood carvings and two Nio guardian statues, one on each side.
A more ancient temple stood here since 794, but Shorakuji was established in 1304.
It burned down in 1615 and was partially rebuilt by 1704, however it was not until 1801 that the complex was reconstructed to its earlier size.

There are a few wooden beautiful buildings that comprise the temple complex.
I washed my hands at the fountain in the entrance, scooping clean water from the bronze dragon’s mouth, and dried my hands with the towel hanging on a string.

The temple looked empty, with nobody around.
We rang the intercom bell outside the office, and the temple priest, bald headed and dressed in a casual grey Jinbei outfit, came to meet us.

He was surprised to see we were not Japanese but foreigners.
We handed him our pilgrimage stamp book and the scroll that I had painted to be stamped.
He drew in black ink a lovely calligraphy on top of the temple red stamp, dried the ink with a hairdryer and handed back to us the scroll and the book carefully.

We told him that today we started the Chugoku pilgrimage, and that we plan to walk the whole thing.
He looked at us astounded.

Then he told us to wait and he ran back to his living quarters and came back with a gift which he offered to us.
It was a beautiful square painting with a circle in the middle and in it was written in calligraphy, the symbols for “Harmony in A Marriage or Family.”

Then he told us that nobody ever walked the Chūgoku pilgrimage.
He said that everybody simply drives the route between temples, motioning in the air as if he were driving an imaginary car, just in case we did not understand his Japanese.

We already knew that, but his words confirmed that if we are able to complete this pilgrimage, we will be the first to fully walk it.

We carefully fitted the large square painting that he had given us into our backpack and went to the main hall to sing the heart sutra and worship.
We rang the bell, deposited our Osamafuda slip in the designated bin which is burnt once per month, sending the wishes and blessings of the pilgrims into the unseen.

As we got ready to leave, the priest came out again, offered us bottles of green tea and mentioned again, that we were the only people he ever net who are walking this pilgrimage.
I refused the bottles of tea, since we had two bottles of water with us already.
I apologize and thanked him again.

We reversed our steps and started walking towards Okayama.
Even though the Sakura are blooming and we were walking in the rural countryside, I cannot say it was beautiful.
There were signs of decay and neglect in many of the houses, and the area was filled with small factories.

Some of the houses, designed in the traditional way, were beautiful.
Their exteriors were lined with black burnt wood, which protects the houses from termites and looks very cool.

We walked on many different paths, ranging from long asphalt roads under the Bullet train (shinkansen), to narrow but busy roads, passing through noisy tunnels and on farm trails.

We wanted to eat lunch and rest our legs, but we passed by no places to eat or drink and no convenience stores.

On a stretch of a wide road, we passed by a big ceramic factory that had a large shop selling Bizen earthenware.
We heard the beautiful sounds of traditional Japanese music and we saw people pulling into their parking lot.
The banners on the roadside said it was a good place to view the Sakura trees in full bloom.

We knew that wherever there is Sakura viewing, there is a chance to find food, so we crossed the busy highway and walked up to investigate.

The music was a live performance by two male musicians, and a few dozen people were sitting to listen or roaming around the pottery studio’s workshop.
I asked the sales lady at the store’s tea shop, if they also sold any food.
She said that yes, they offer a daily dish of curry rice.

She took us up the hill behind one of the workshops, and introduced us to a friendly man.
I said that we don’t eat meat, and he reassured me that the curry had no meat, just carrots, shiitake mushrooms, leeks and daikon.

We were served our meal in beautiful Bizzen ceramic pots, which are grey with tons of gold, silver and warm orange splashes, depending on what they threw into the fire to create these effects, that look like burn marks.

The lunch was a nice portion of steamed rice with a delicious veg curry and a small salad.
There was also a stall of fair food, offering a traditional sweet made in a molded grill, of pancake with a sweet bean paste filling.
We bought two and ate them as dessert.

We chatted with a retired couple from San Francisco, who had retired a few months ago to live in Japan.
The wife is Japanese and we talked about adjusting to life in Japan, and the pluses and minuses of rural living.

Bizen is a very well known pottery town, and there are many small kilns and workshops, making and selling the distinctive Bizen earthenware.
It seemed like so many potters have lived in this rural town for over a thousand years.

We tried to walk away from the main road, not because it had no sidewalks, but because it was noisy and we were breathing car exhaust fumes and our hats were nearly flying off with every speeding truck.

The small road that passed through the streets of houses, was quiet and we saw many small pottery shops, all attached to the houses the potters lived in.
We saw much wood collected for the burning of the kilns, but no cafes or restaurants at all.

I finished the day almost waddling, with pain now in my lower back, hips, legs and at the bottom of my feet.

After dinner, I showered, rubbed my feet with a balm and was asleep before Jules got out of the shower.

It is hard to believe that I will feel good enough to walk tomorrow.
But I will give it my very best…