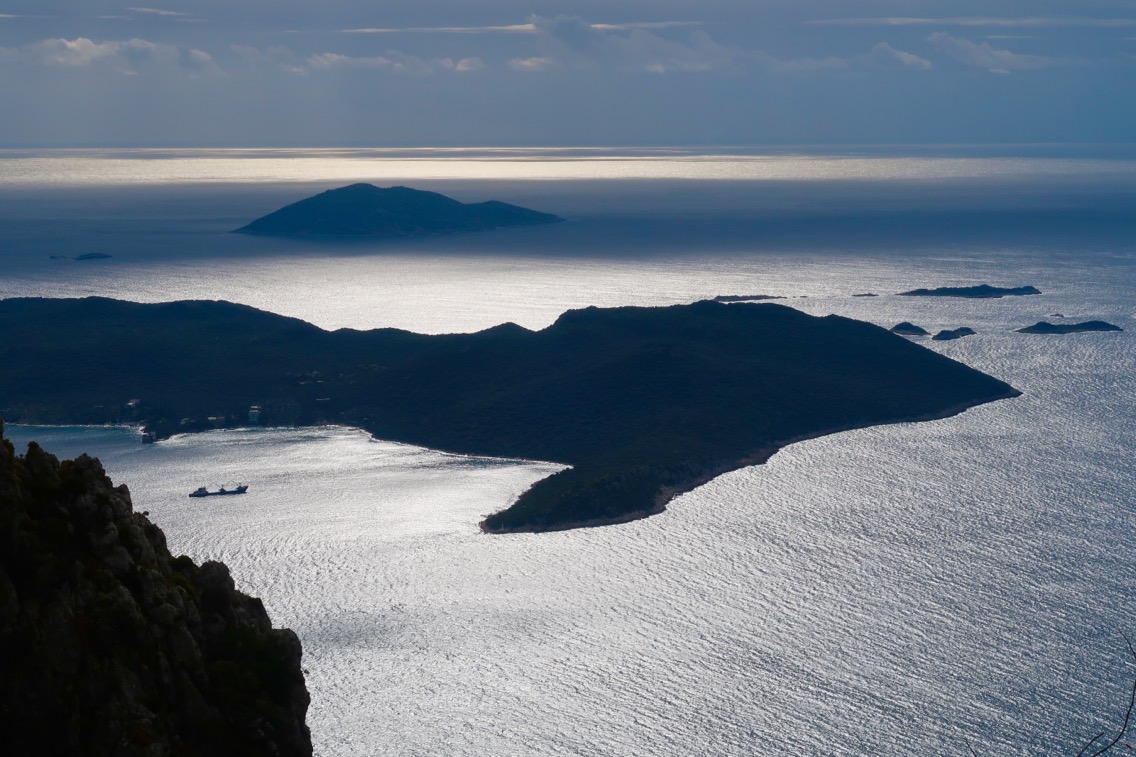 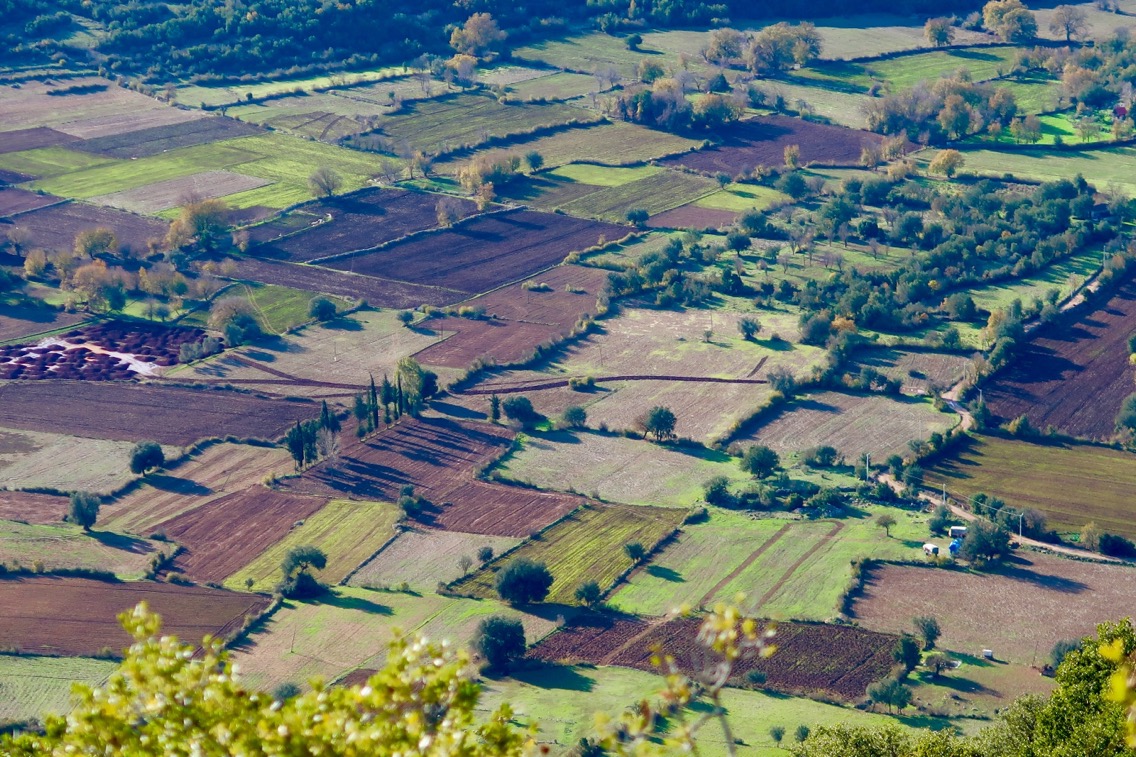 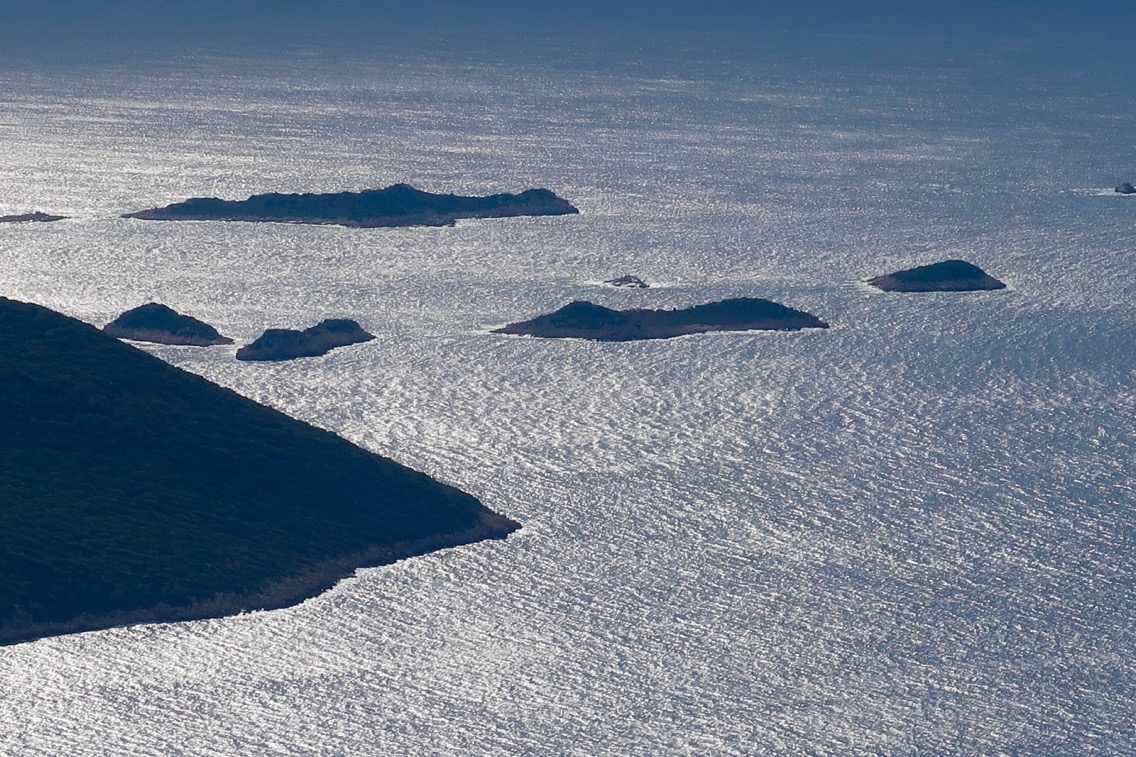 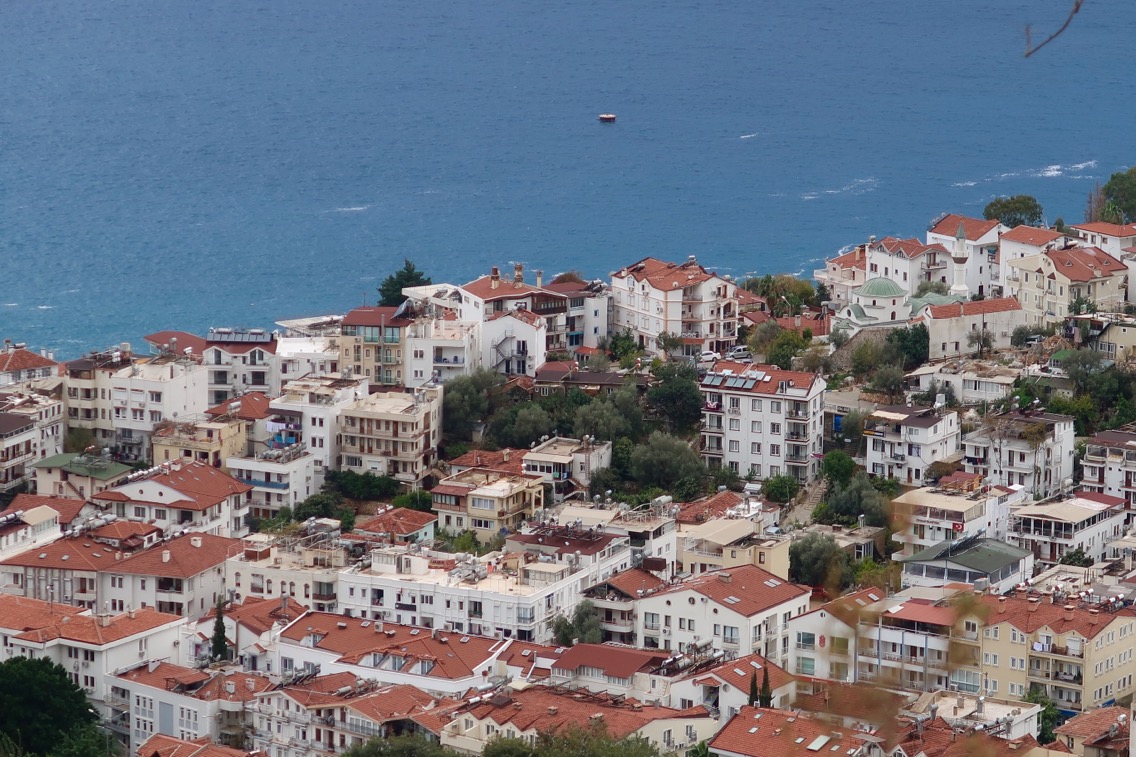 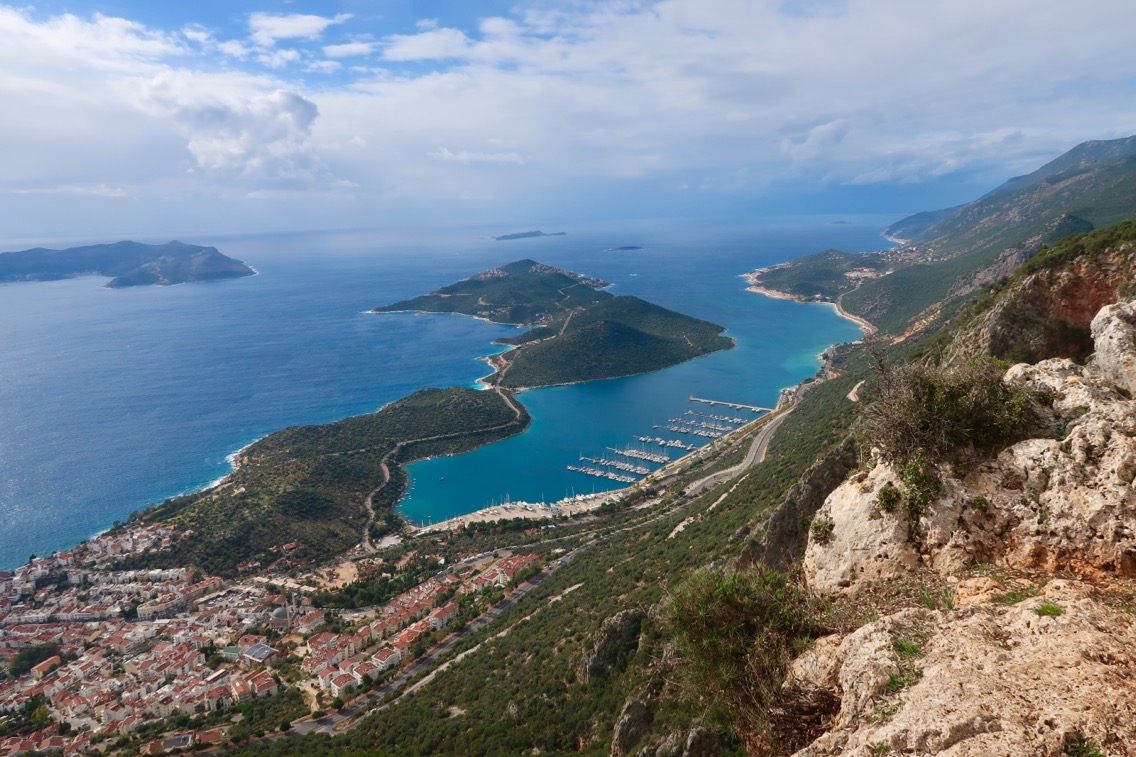 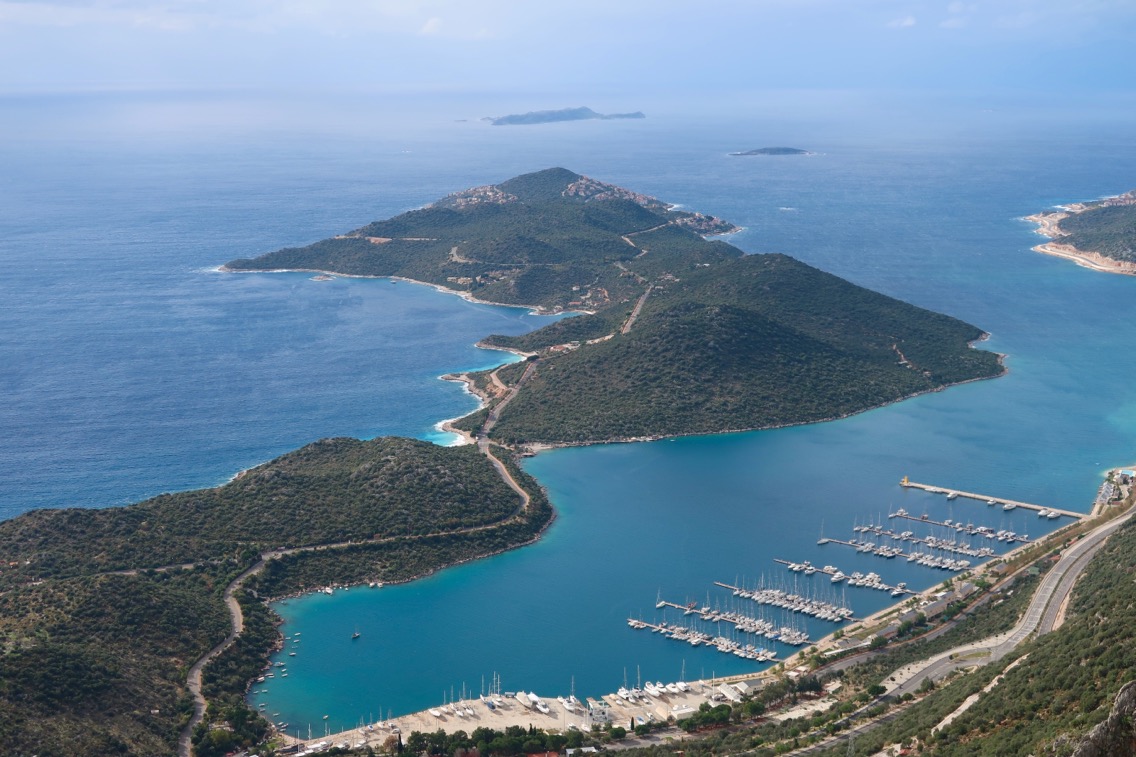 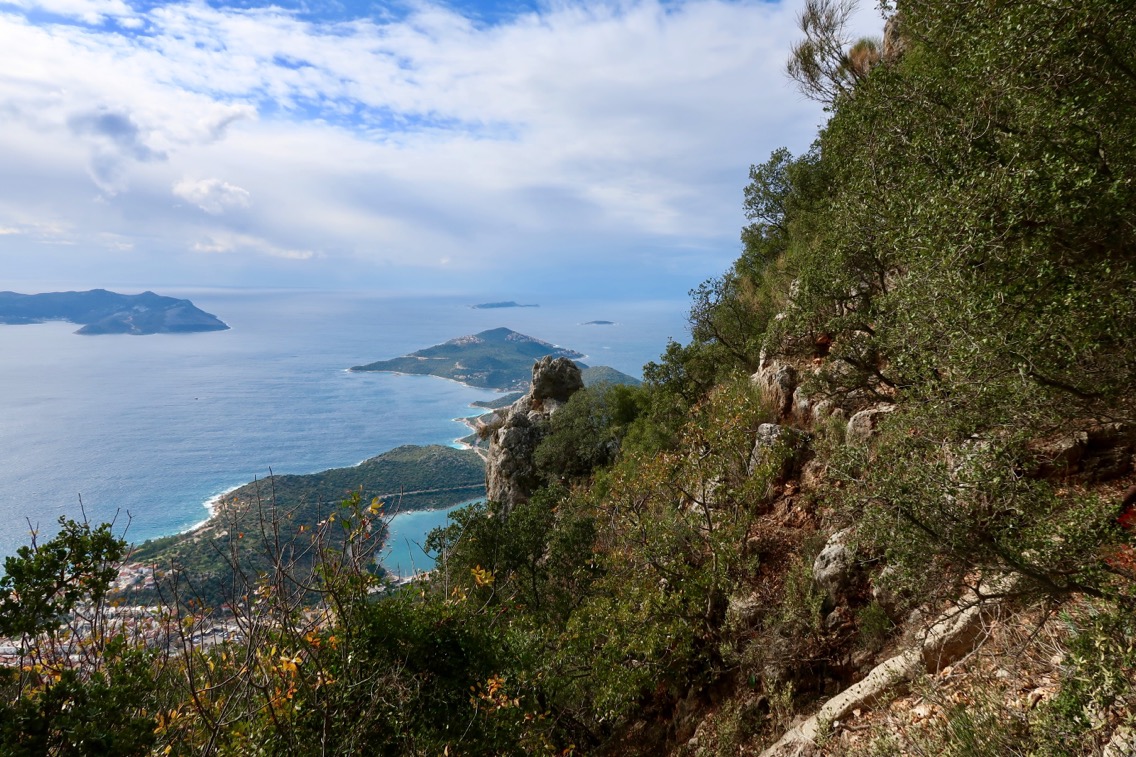 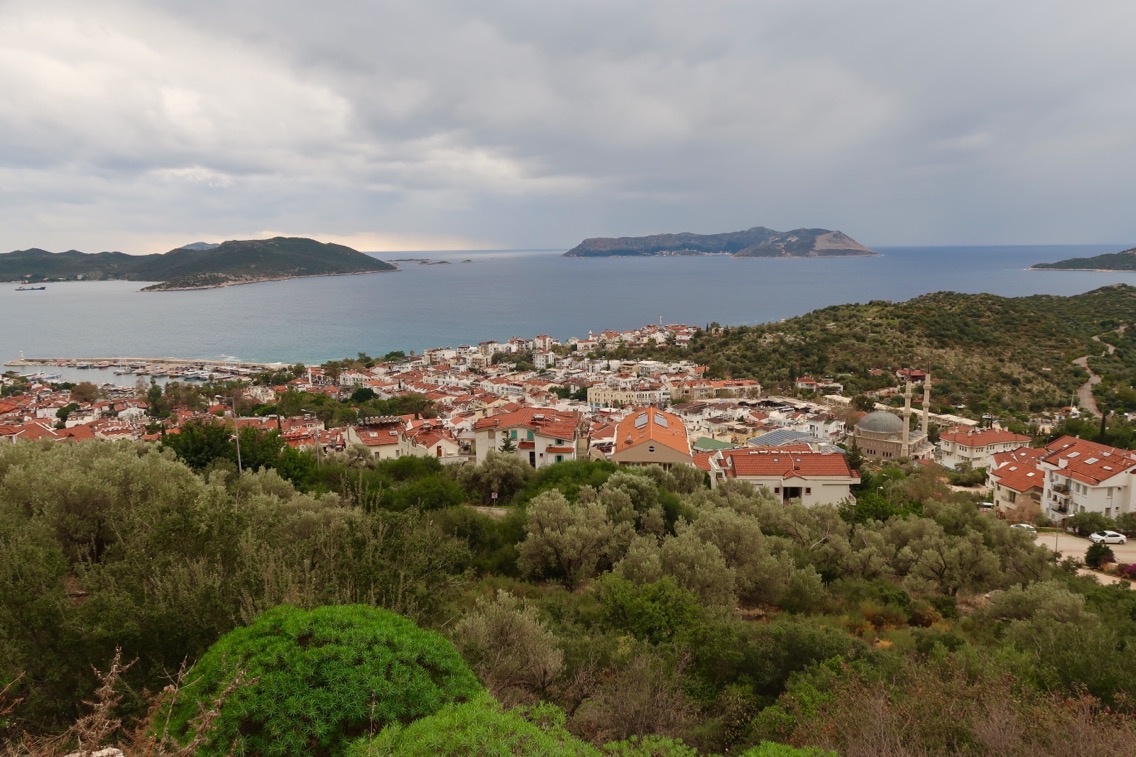 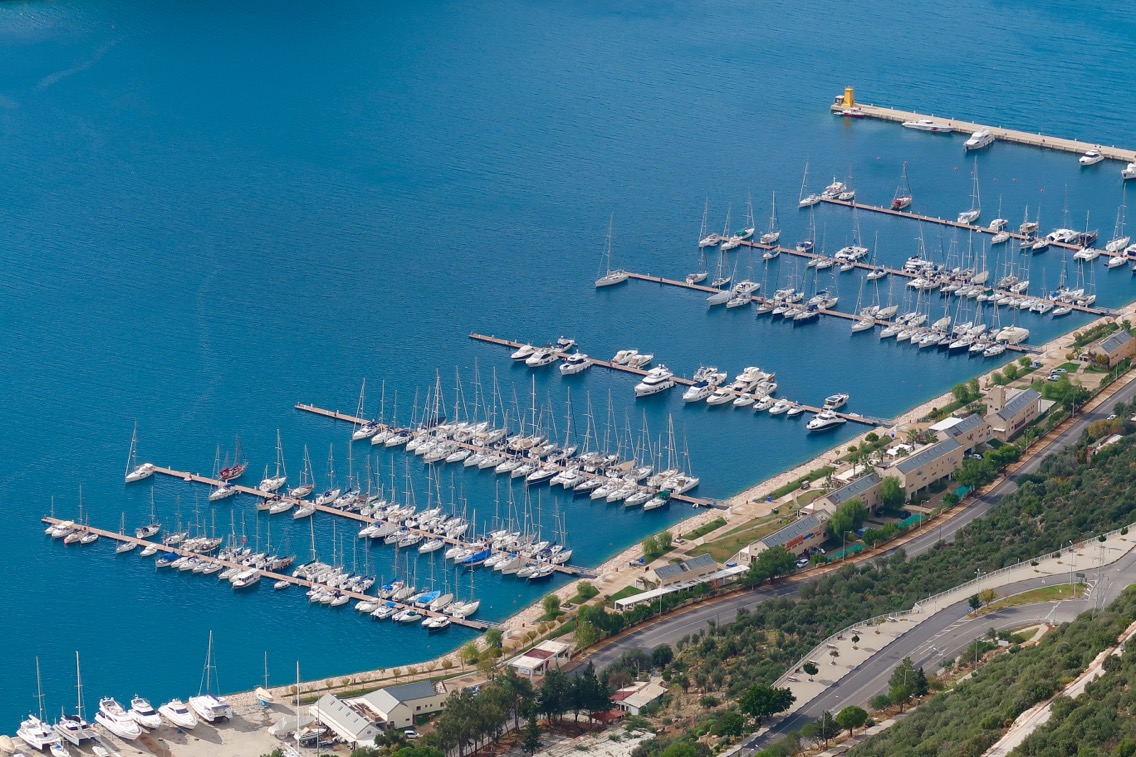 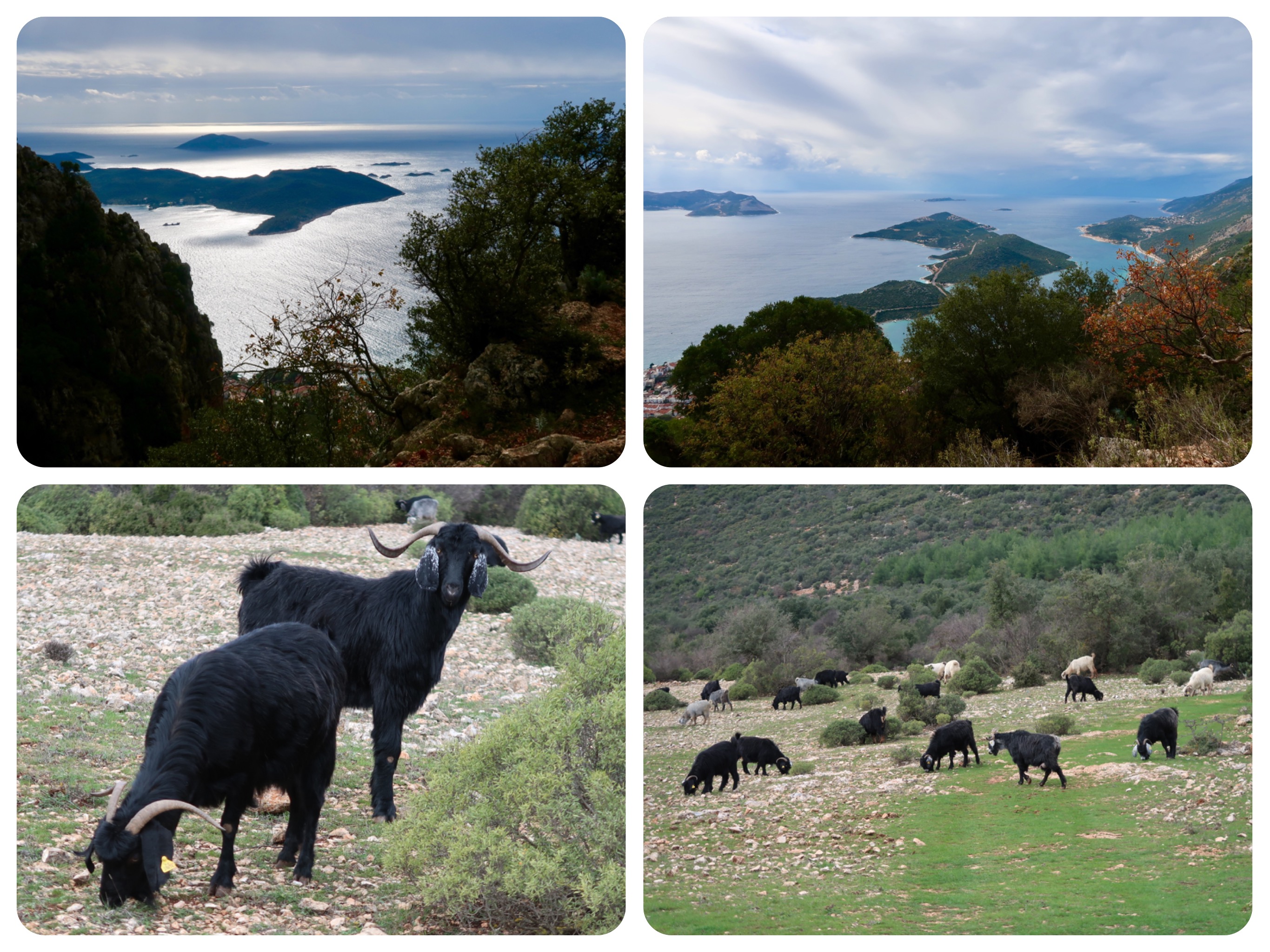 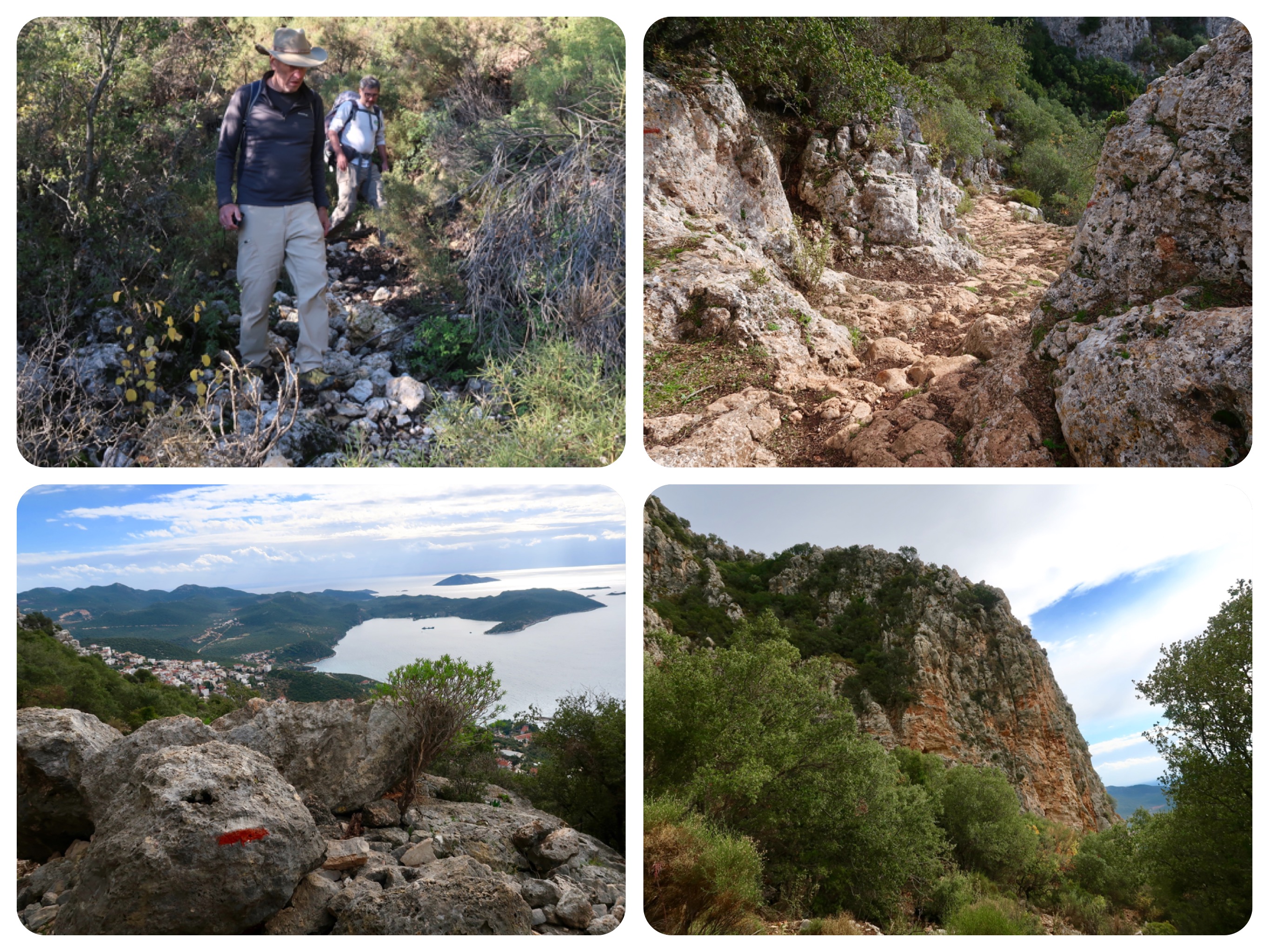 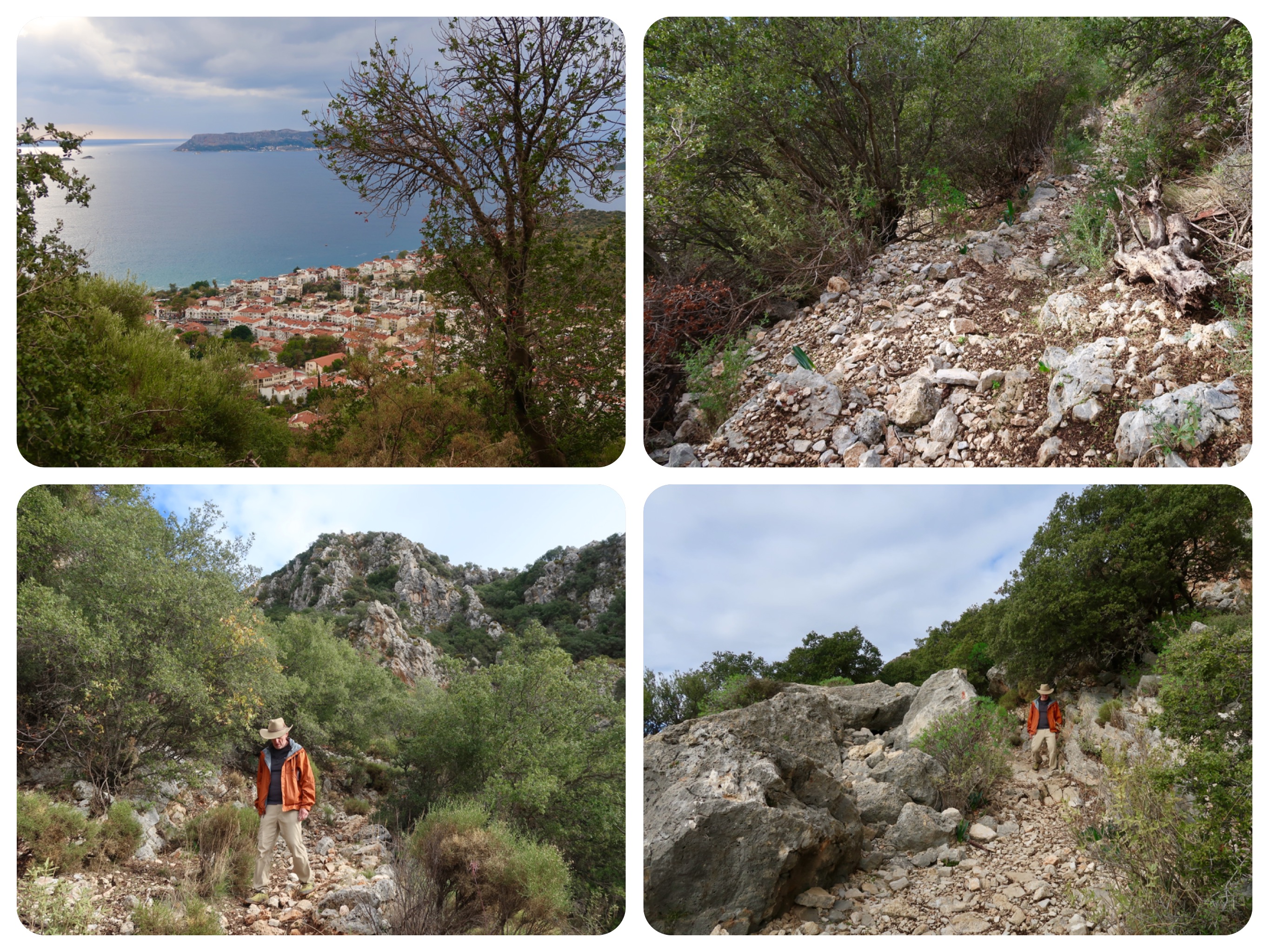 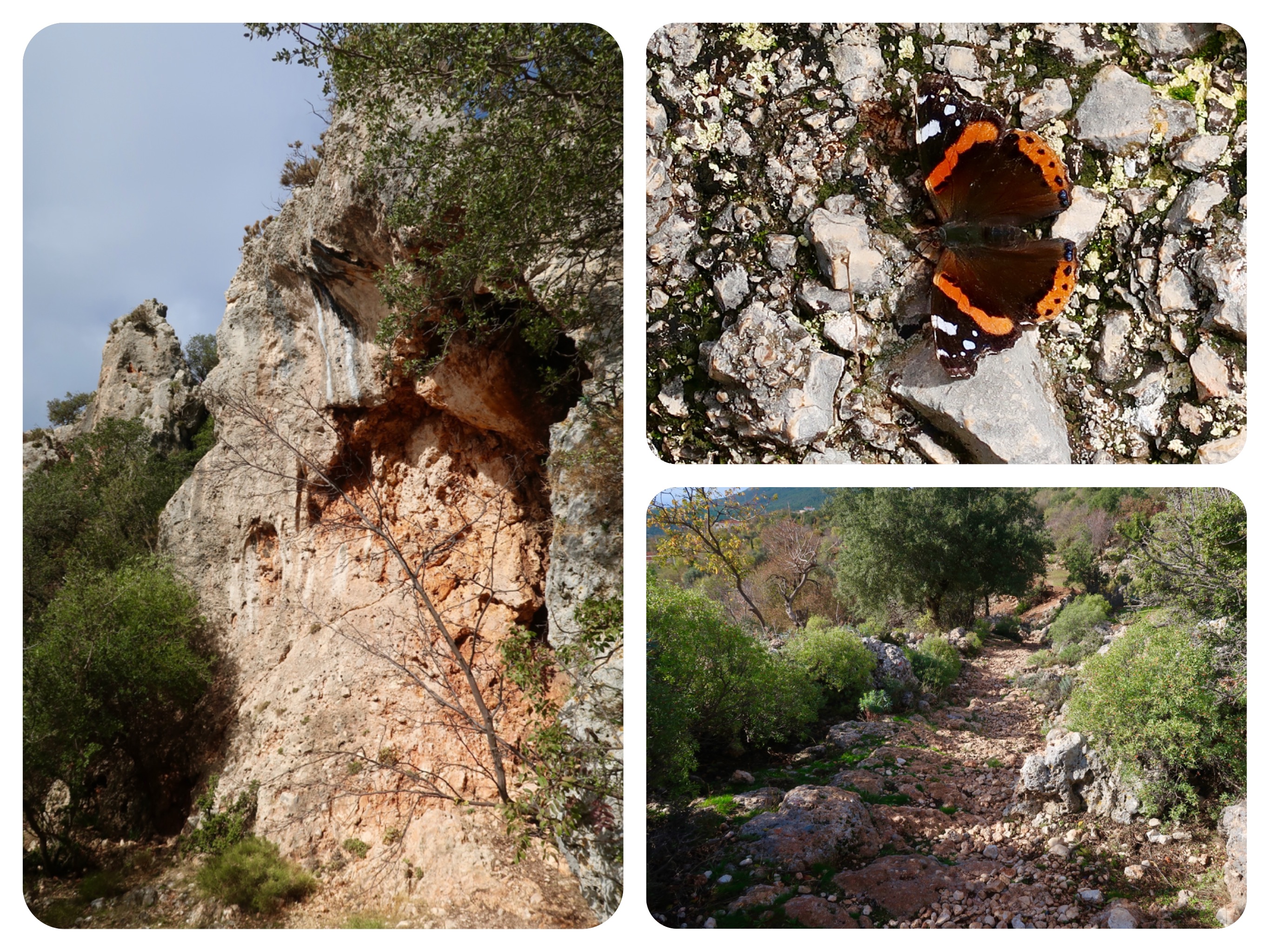 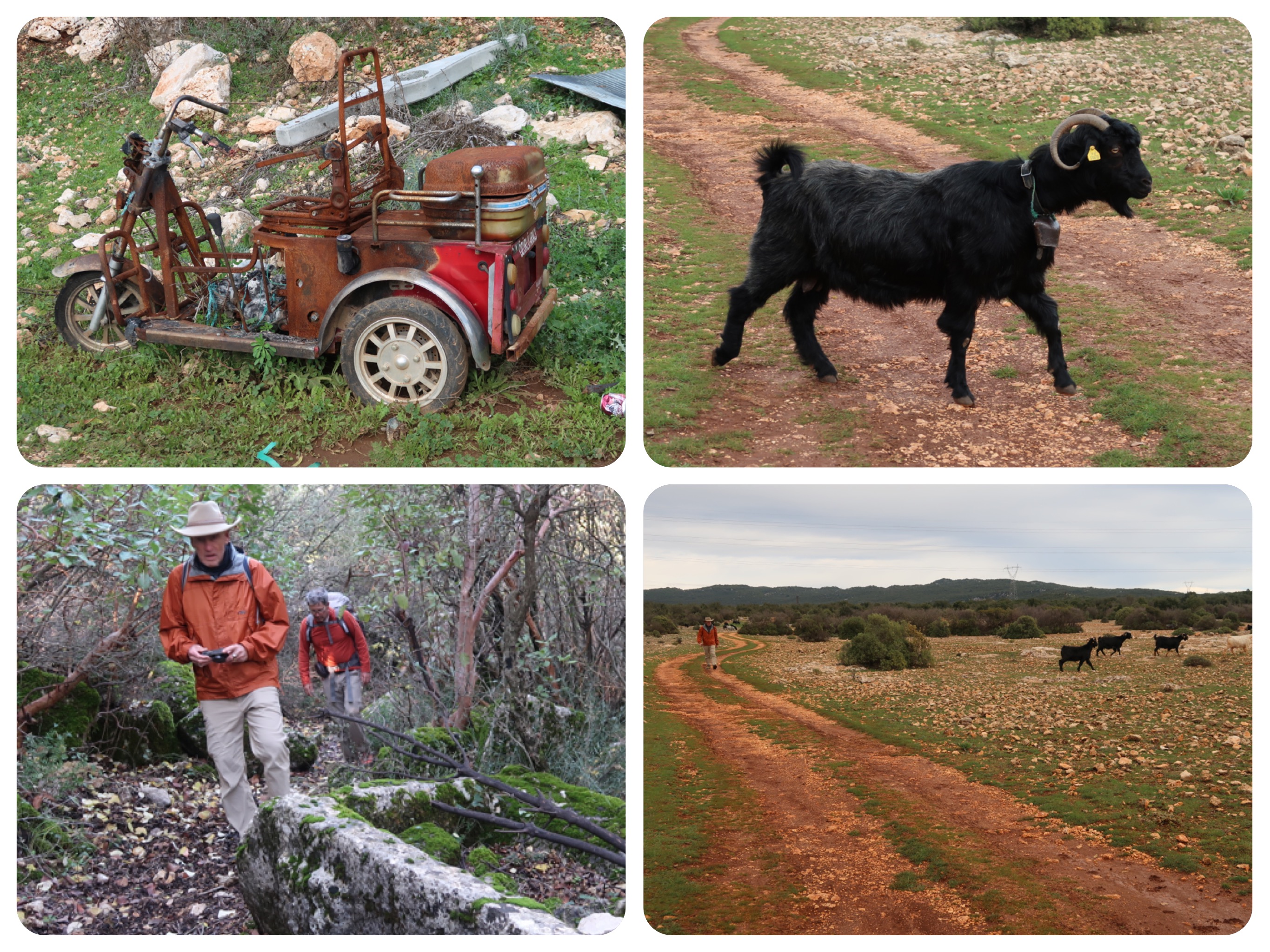 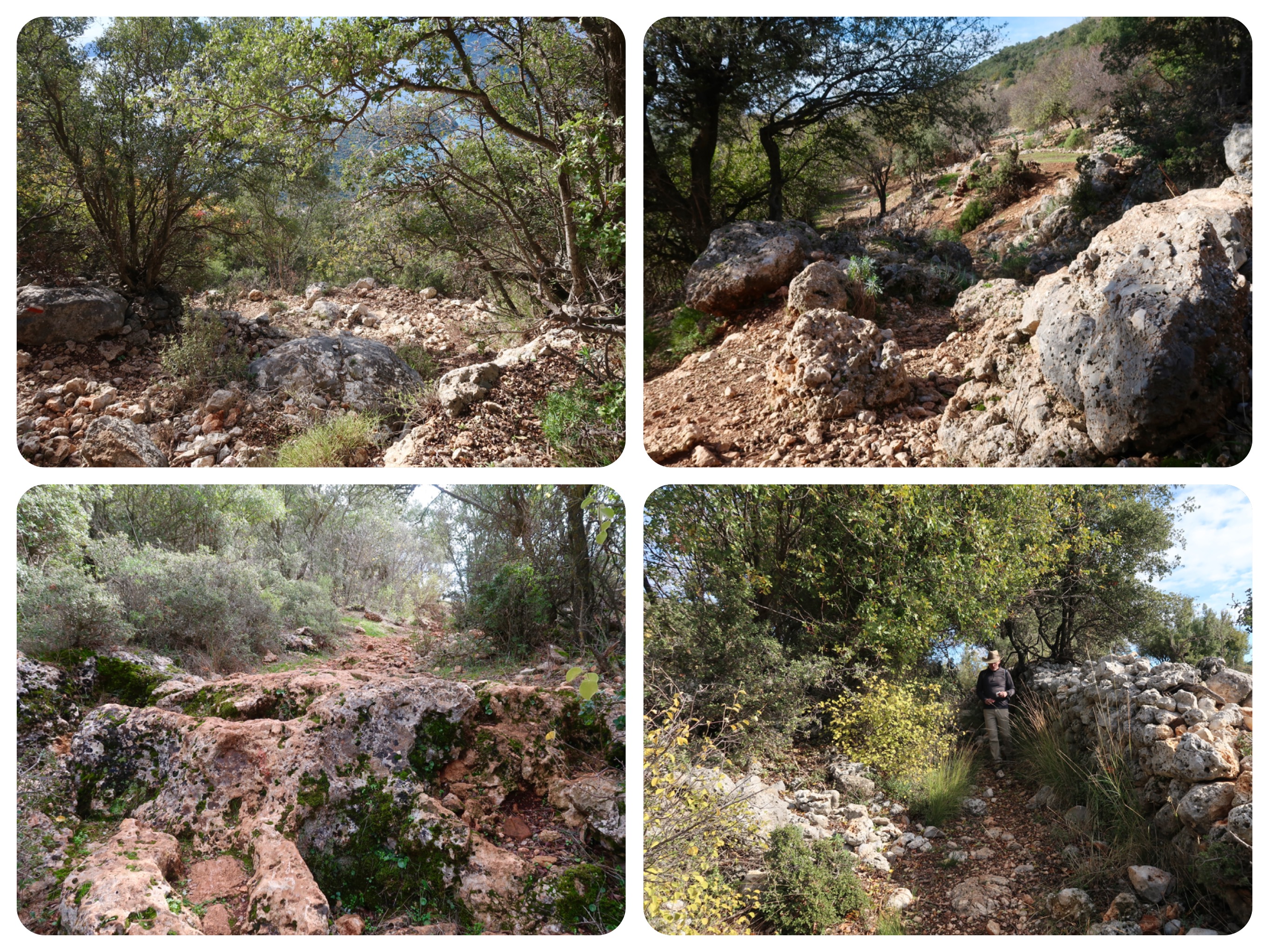 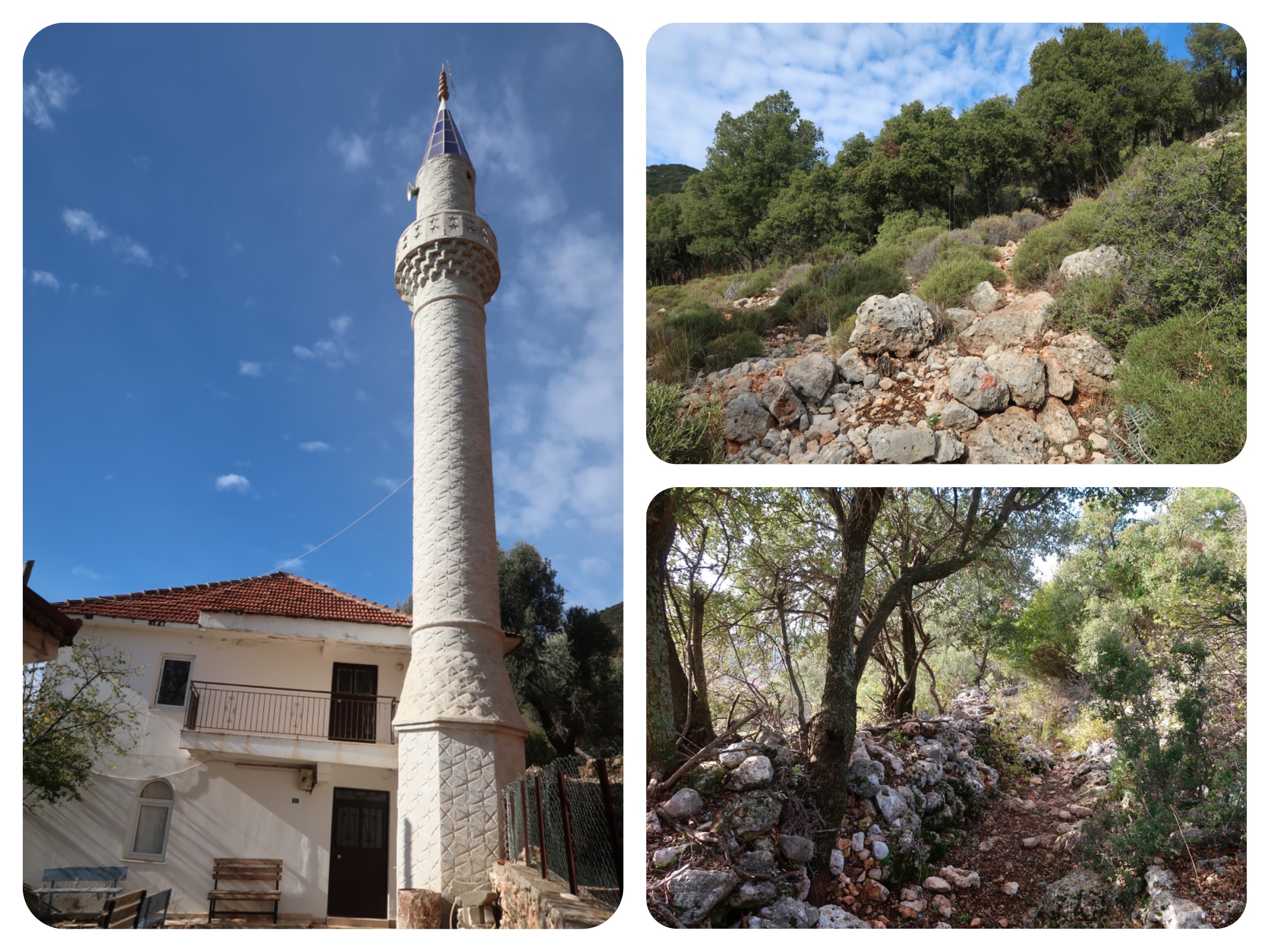 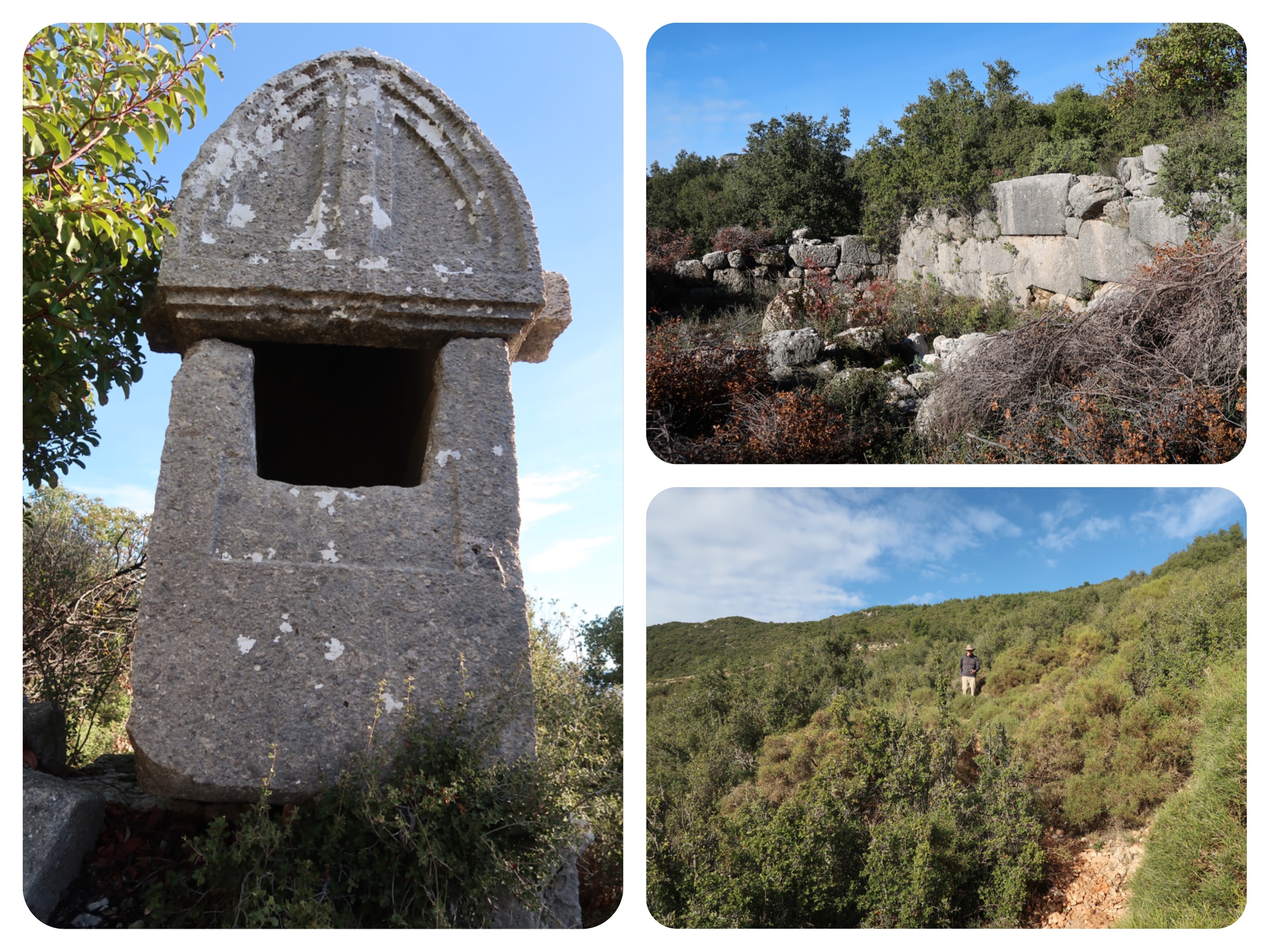 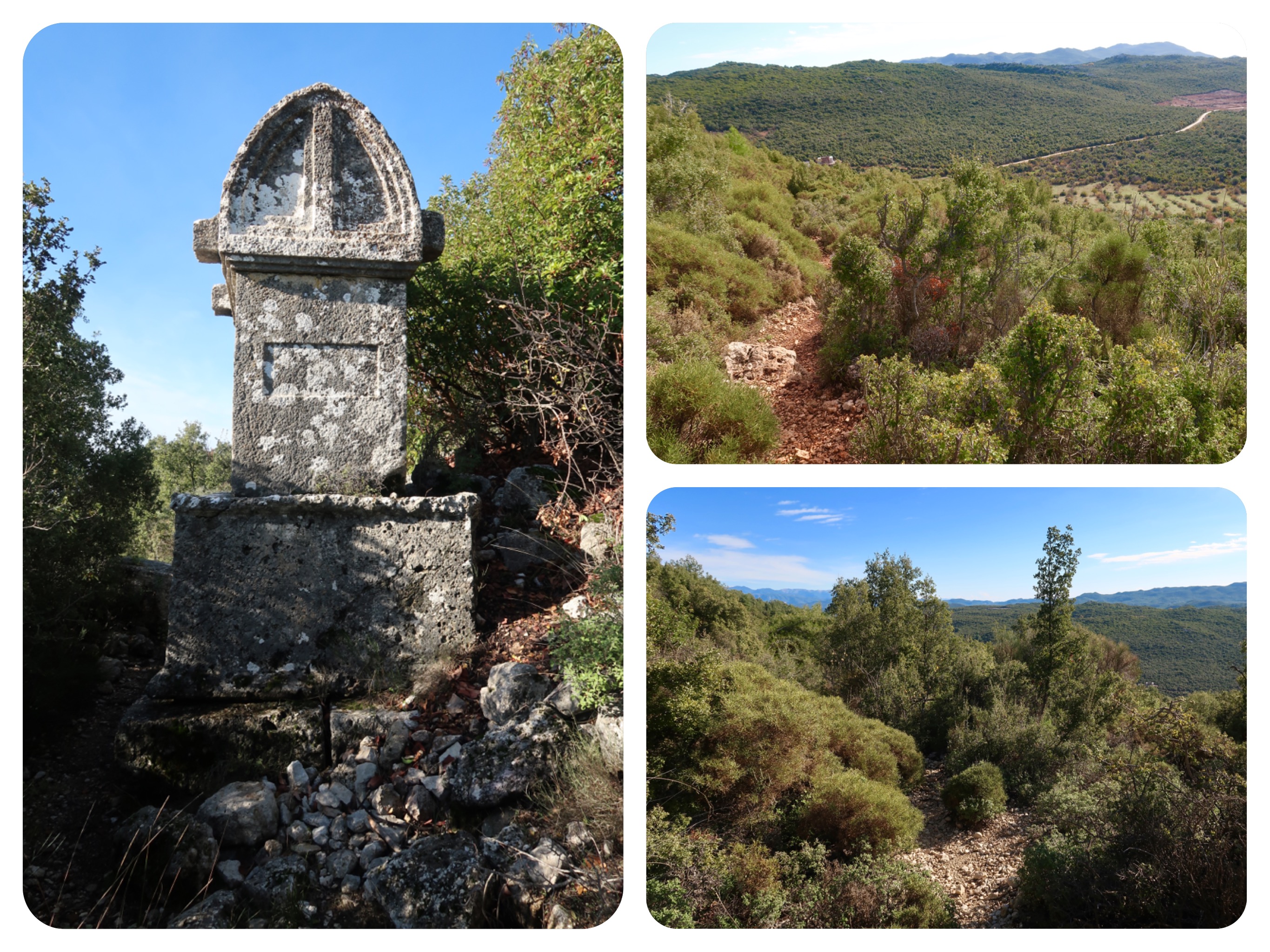 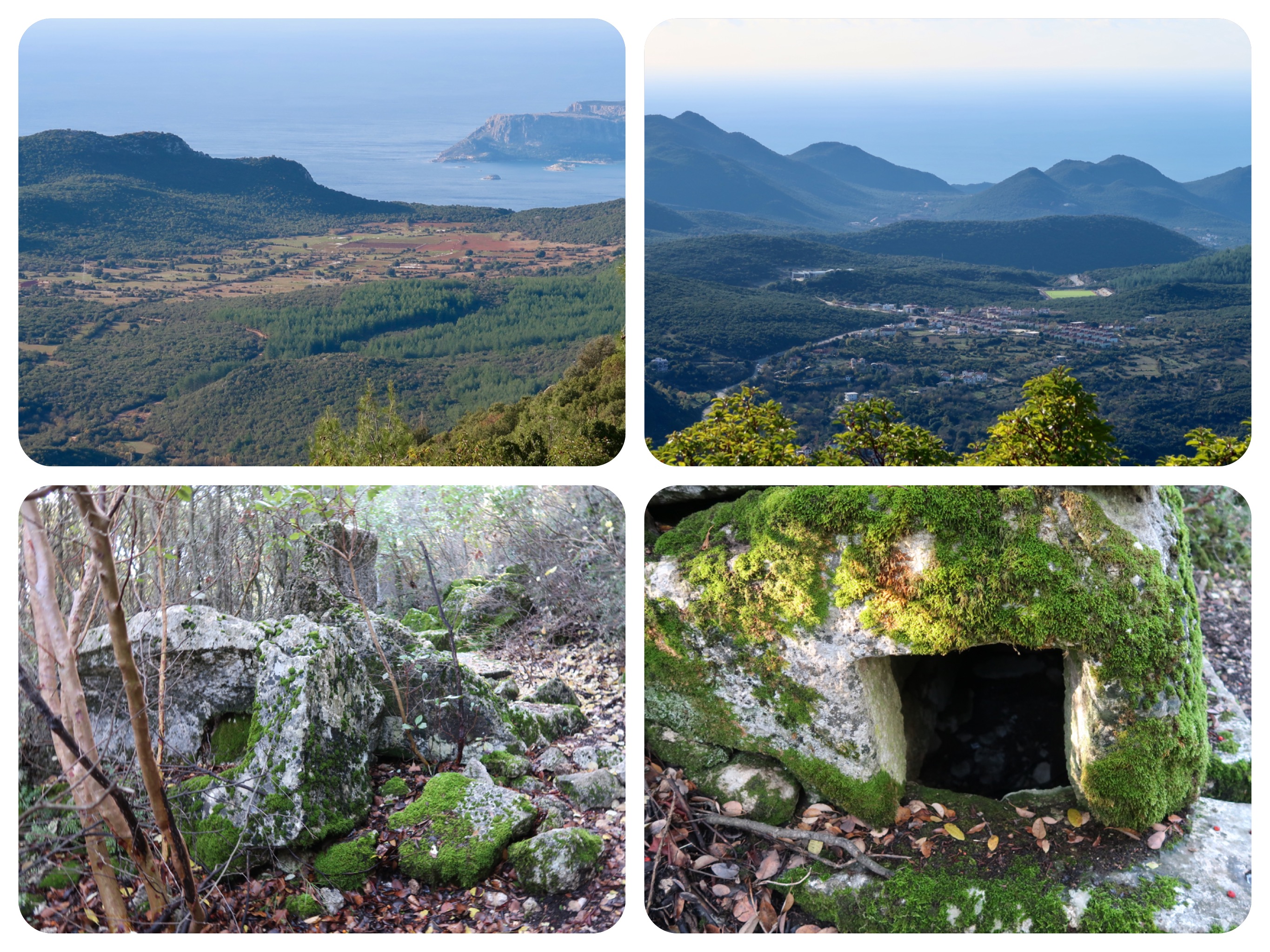 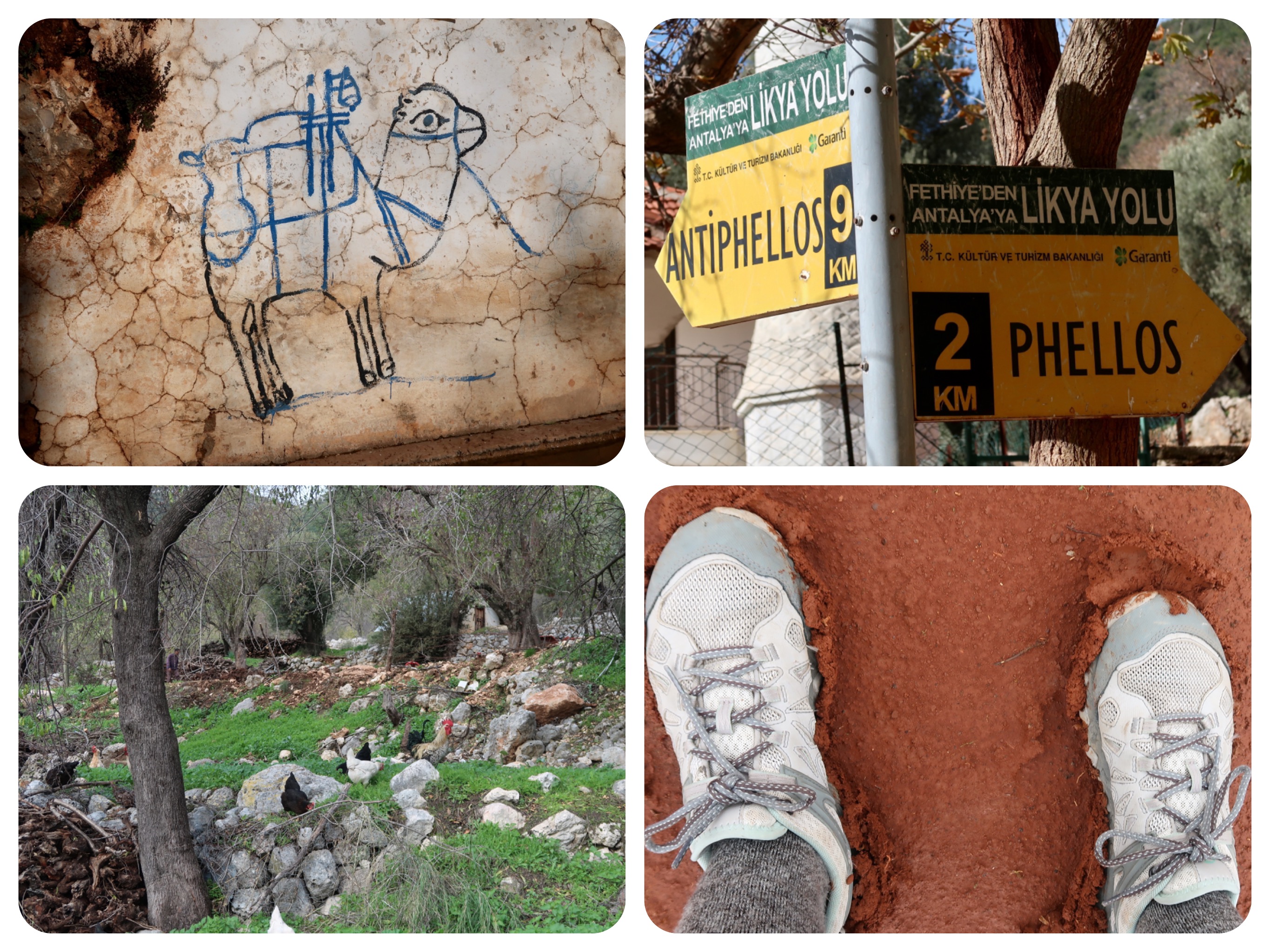 After another stormy night, the sky was clear this morning.
But the weather forecast called for some rain in the afternoon, so we wore our raincoats, packed some extra water in our day packs, and some snacks that we had bought yesterday.

Today’s hike is over a mountain ridge and a tall mountain, crossing two small villages, but only one of them with a cafe, which might or might not be open in the winter.

We had walked only about a kilometer, when we met another hiker walking the Lycian way.
He was lost and asked us if we were walking towards Phellos.

We said that we were, and he joined us.
He said he was originally from Oregon in the USA, but that he has been living in Shanghai, China for the past thirty years.
He was in London on a business trip when he heard about the Lycian Way, and he decided to take six days’ vacation to walk some of it.

He had been caught in the rain and lightning storm last night, and the farmhouse he found shelter in lost its power and had no heat, so he left early in the morning and started walking until he lost his way.
The map, the app and the book that he had, were not good in helping him chart the right way.
He said he had lost the path many times in the past five days and had to walk on paved roads instead of the Lycian Way.

Again, I felt grateful for the Pocket Earth app, which has served me well in navigating the path.
Either the rocks with path markings have washed away, the road got flooded or covered by rock avalanches, or bulldozers have made modifications to the path, to access nearby construction sites.

We walked together for a large part of the day, and he told us about some long distance walks he has done in Portugal, which sounded very exciting to me.
He said he did a small portion of the “Fishermen’s Trail” in Portugal and that he liked it.
Then he added that it was a well marked village to village network of day walks, where you can stay and find places to eat, and that the hardest part was walking on the sand.
It was hard, but not as hard as walking on the rocks of the Lycian Trail all day.

He also mentioned “The Heritage Trail” in Portugal, as something we might enjoy doing.
We talked about different mountains we had climbed, including some in China which he knew and had visited.

He was carrying a very big backpack, not because he was camping, but because he had all of his clothes and even his business suit with him, from his recent business trip.
I asked him if he liked living in Shanghai.
He said sometimes he does and sometimes he doesn’t.
“It is a big city with no mountains to hike…,” he said sadly.

The ruins of Phellos are near the top of the mountain.
The remains of the stone walls and the tombs are surrounded by brush and thick, thorny vegetation.
The trail was a rocky narrow path, cut in the thick brush.

Then we started the steep descent down the mountain.
It was again steep and very rocky.
The two small villages we passed had no places that were open to have tea or to eat, so we sat on the rocks and ate some dried fruit, a small pomegranate and a few nuts.

Below the villages, we walked over muddy fields full of long haired goats.
They were beautiful, with their large bells and small horns.
Our new friend had picked up some stones to throw at the dogs, accompanying the herds.
He said that his guidebook warns against aggressive dogs herding flocks of sheep and goats.

I have also read this in the guidebook, but I was not about throwing stones at aggressive dogs.
I much prefer to work energetically.
I mentally and emotionally send them love and respect, and keep my distance.

At the end of the muddy fields, my shoes were completely covered in red mud, as well as my socks and the bottom of my pants.

We had lost our new companion, who had veered off the path in the wrong direction.
We called and called, but he was lost.
We left him to figure out the path markings on his own.
On the top of the flattops, we had stunning views over the city of Kaş, the marina and the islands across the sea.

Then we began the steep descent on the rocky mountainside.
Our muddy wet shoes were slippery on the broken rocks, and we had to walk very slowly and carefully.

When we stopped to rest and drink some water, we finally saw our friend again.
He said he had gone the wrong way but finally retraced his steps and followed the path that we had taken.
There was no other path down the ravine into Kaş.

We walked together some more and he told us that we were the only people he had met on the trail in the five days he has walked.
He was expecting more people around.
Kaş was the end of his walk, and I thought to myself that he might be disappointed at this beach resort town that is also mostly closed for the winter.
Most cafes and restaurants were closed, with only a few places, mostly around the main square or those serving the locals, open.

When we reached town, we changed our clothes at the hotel and took another bag of muddy clothes to the laundromat.
While our clothes were being washed, we ate at a local cafe some Gosleme, very thin flat bread filled with potatoes and cheese, made to order on an old griddle by a friendly mama.
Her husband took me to the local rustic toilet, when I asked to use the toilet, and waited to escort me back to their place.

It was rang when we finished the day and made our way to our hotel.
That night the rain intensified.
I was thinking it will be muddy tomorrow on the Lycian way…
Just us and the goats, will be walking on the muddy narrow trails….