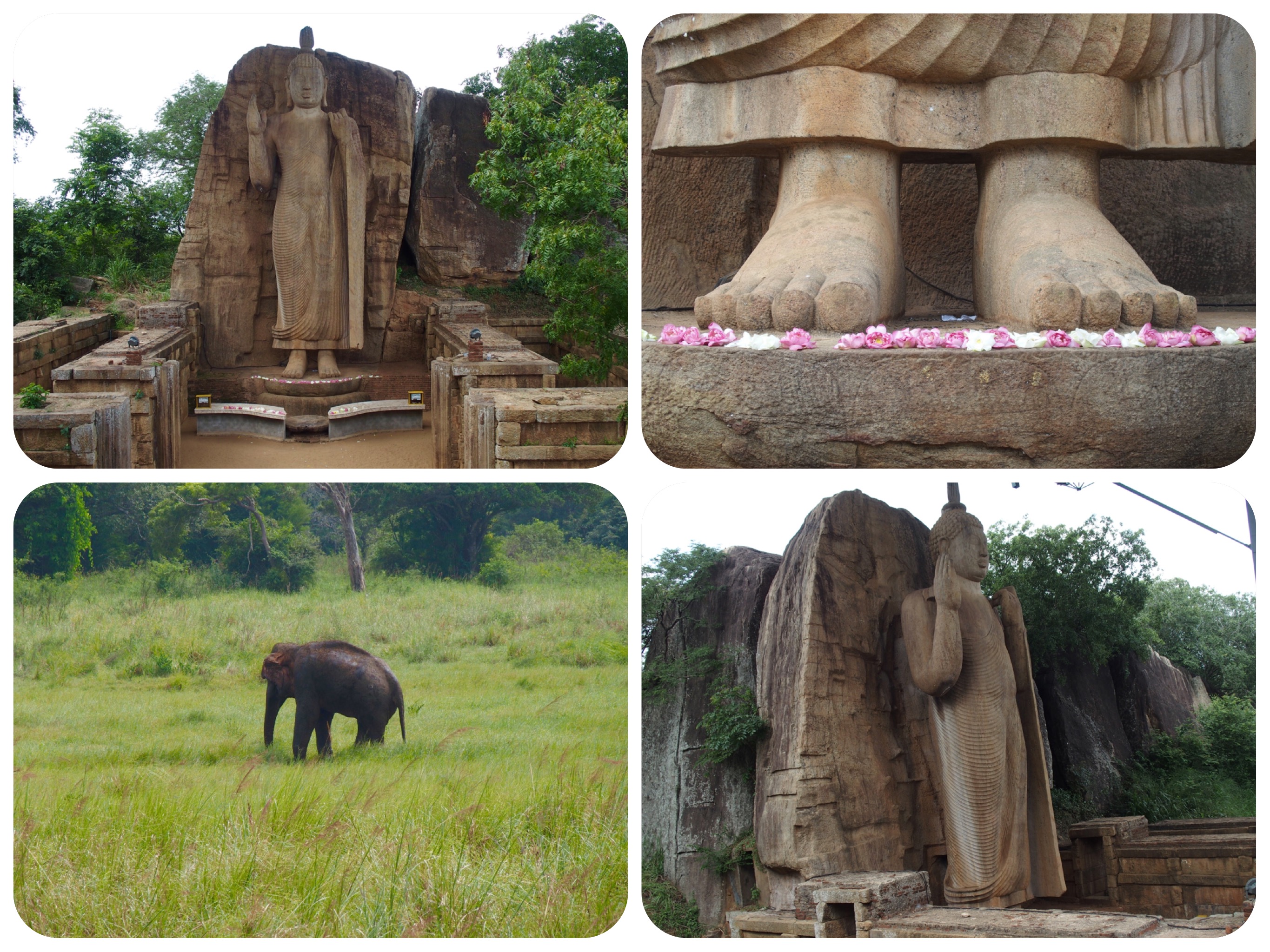 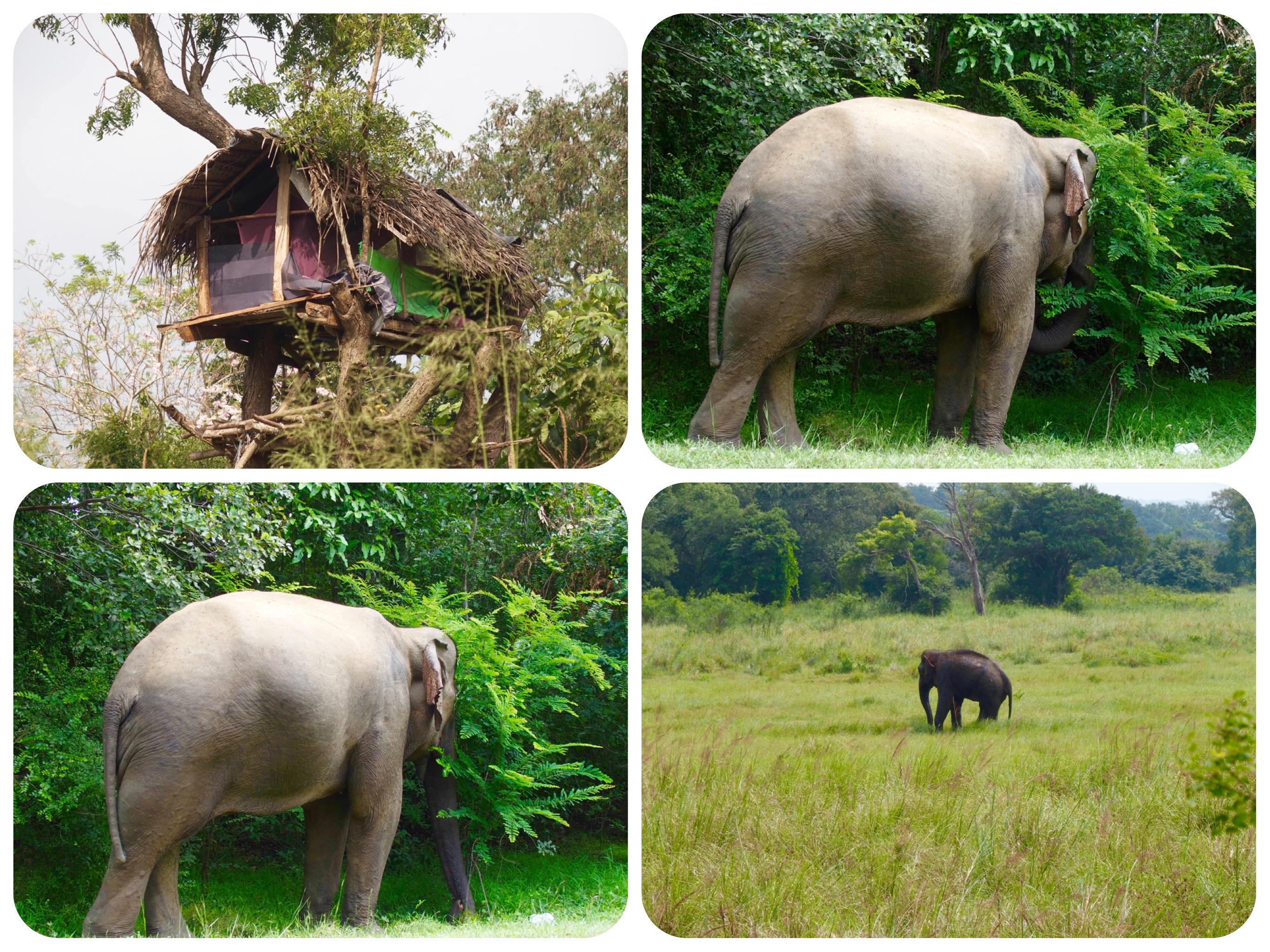 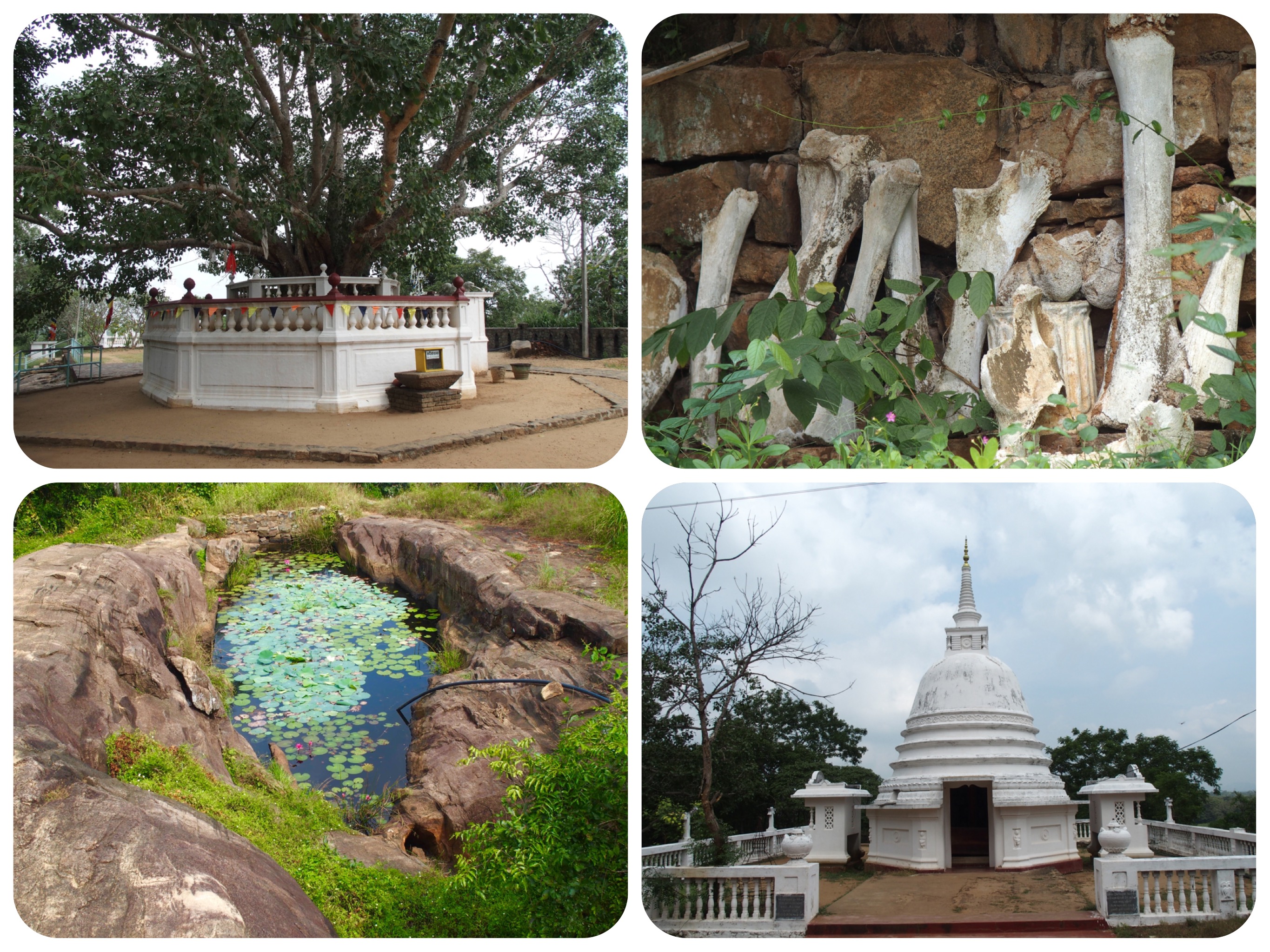 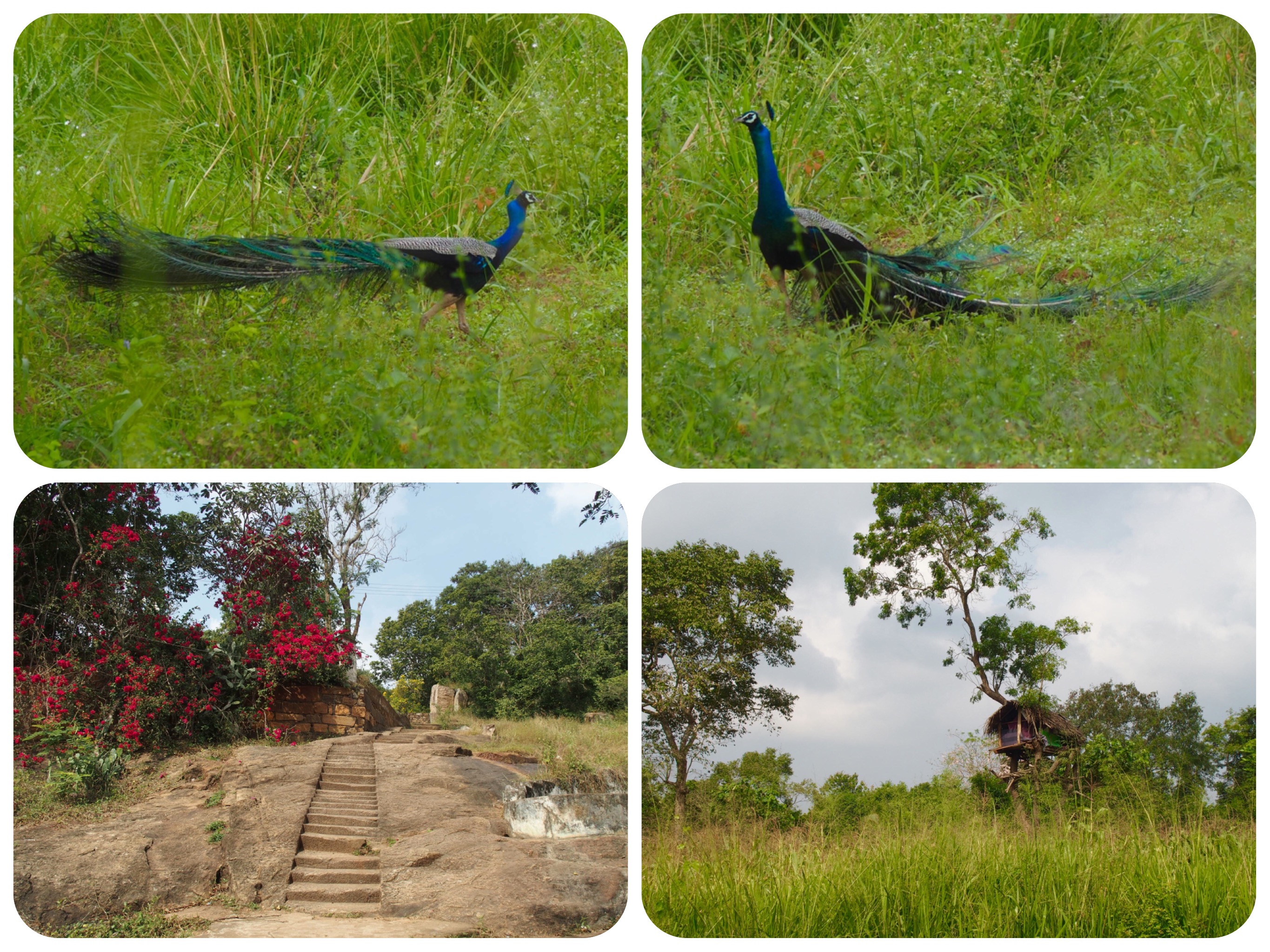 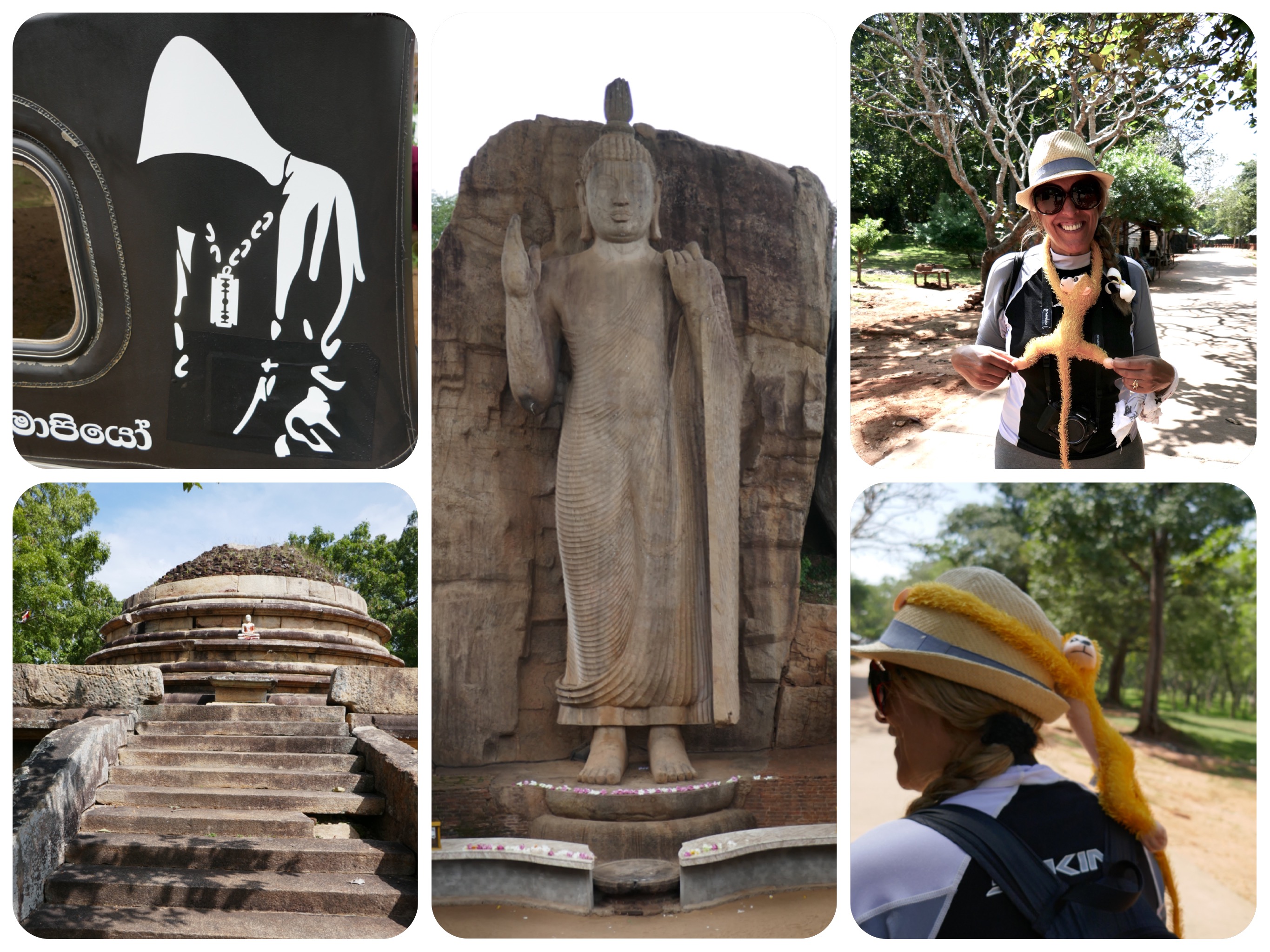 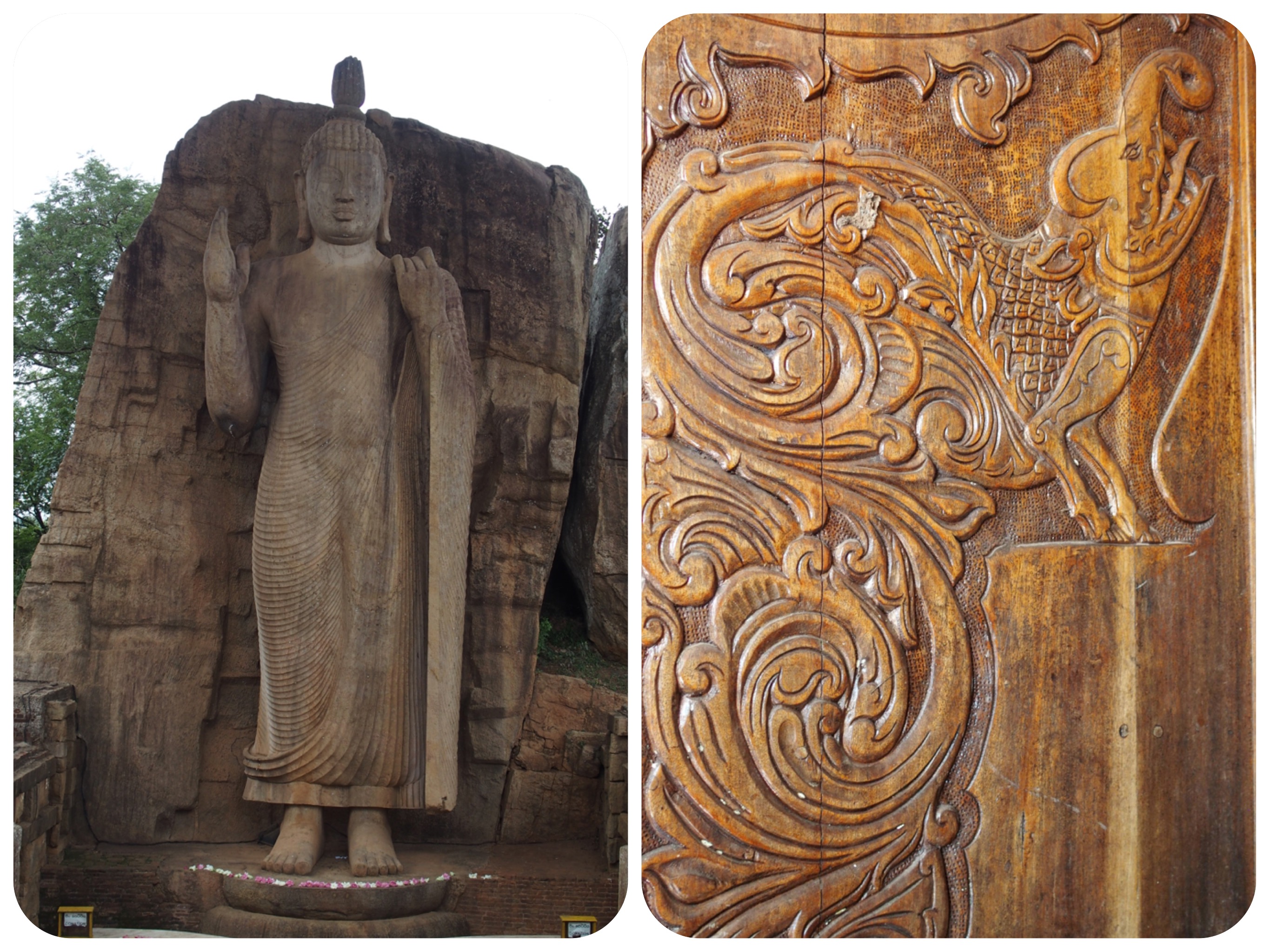 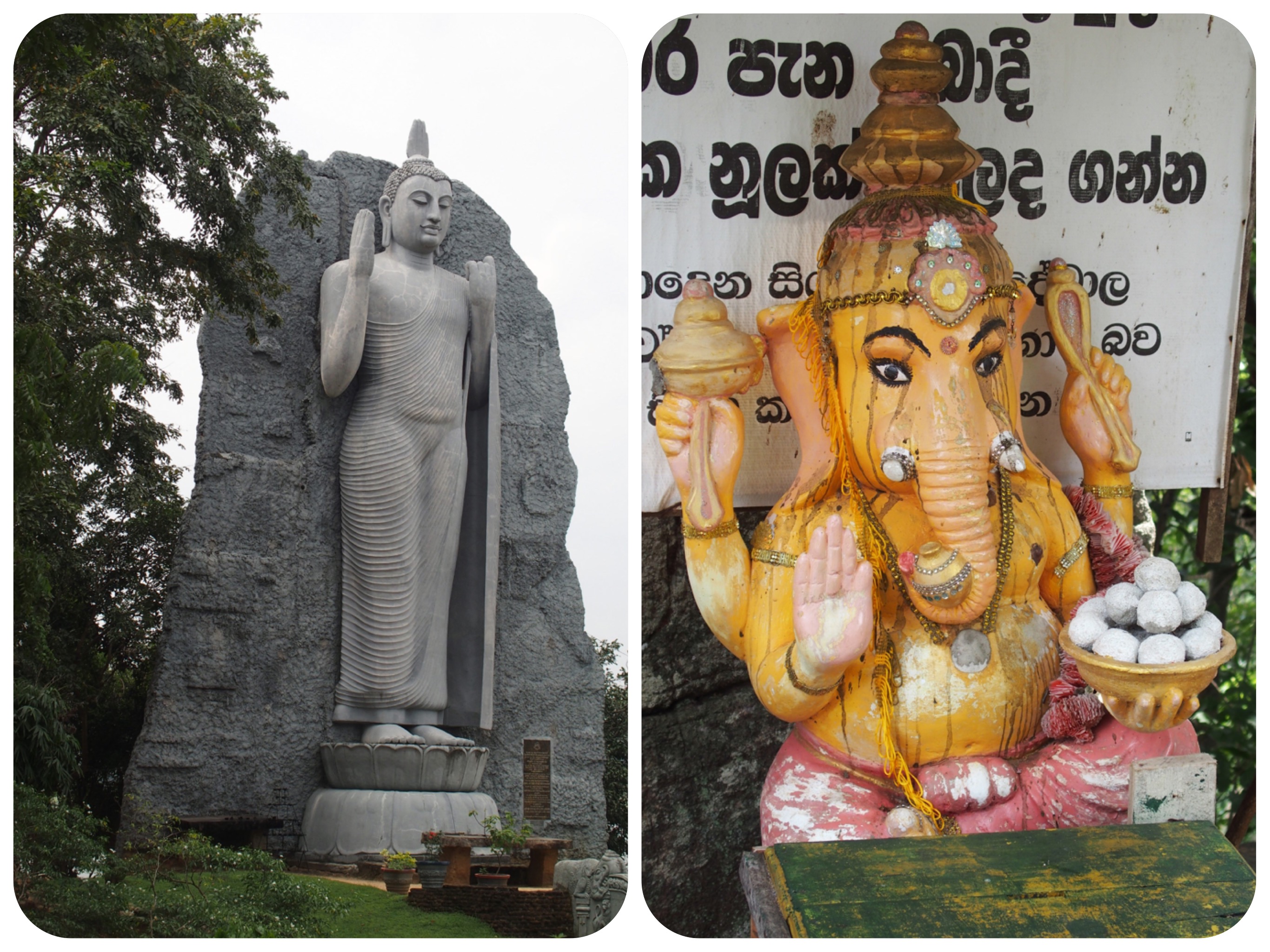 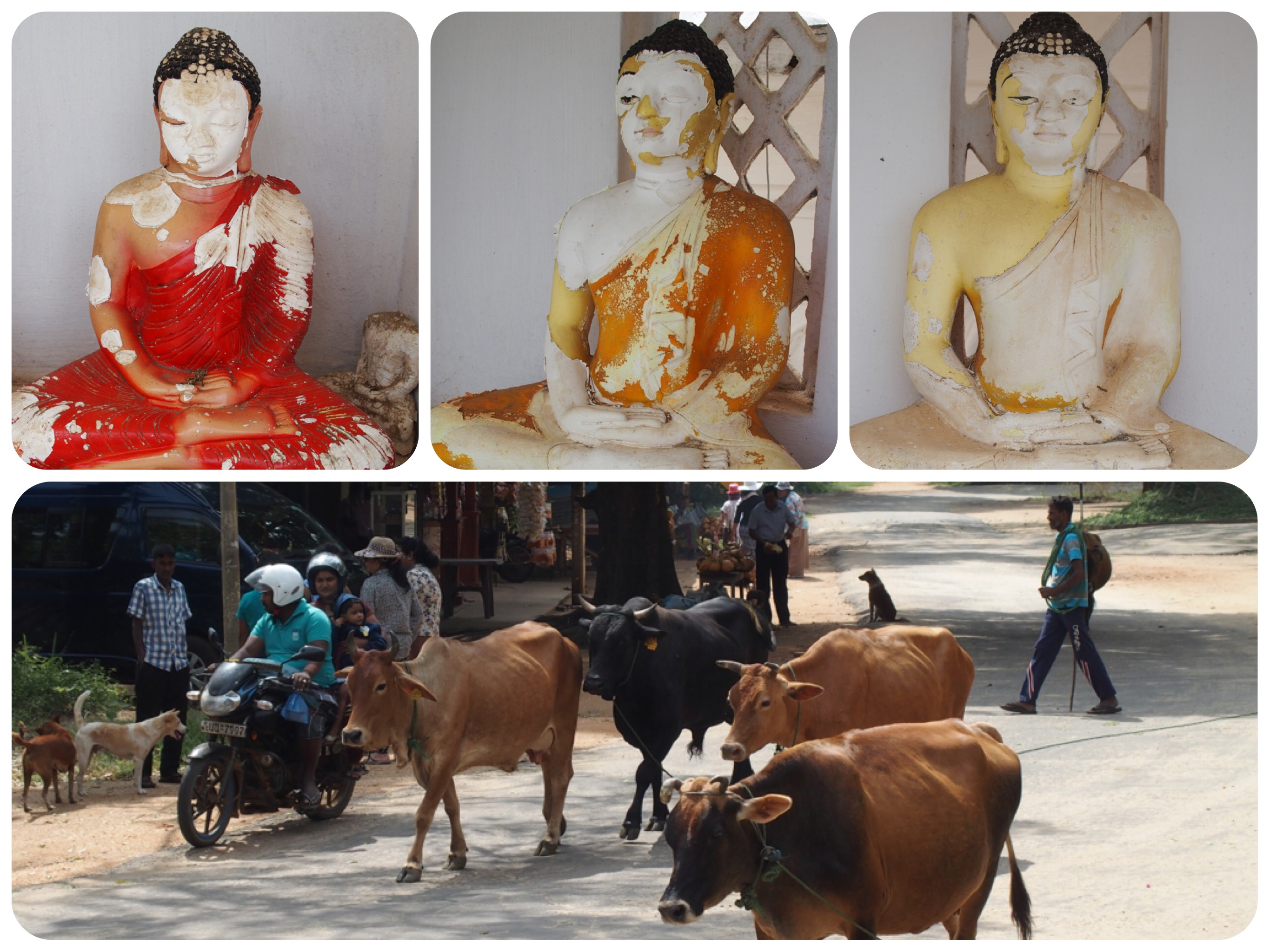 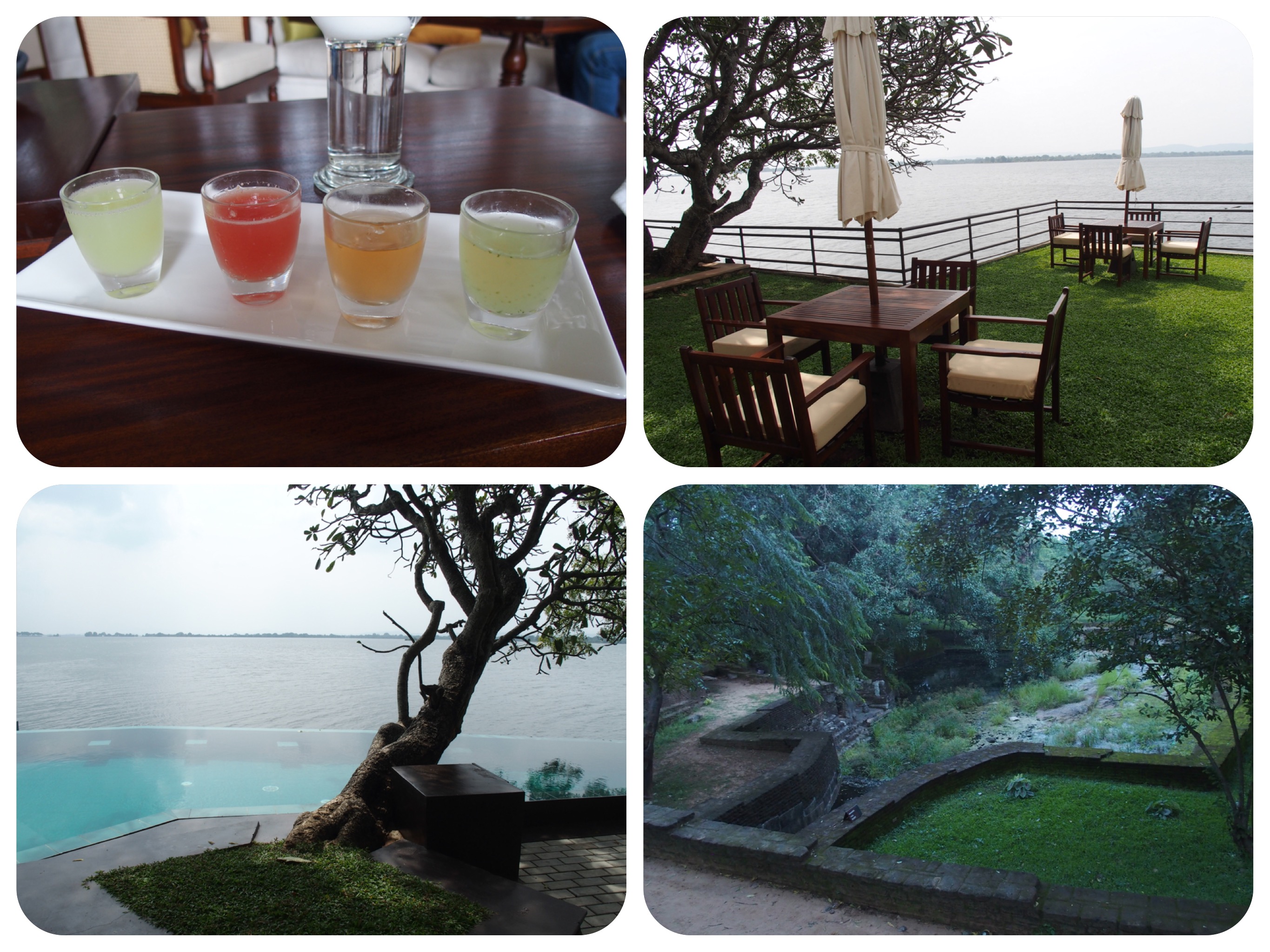 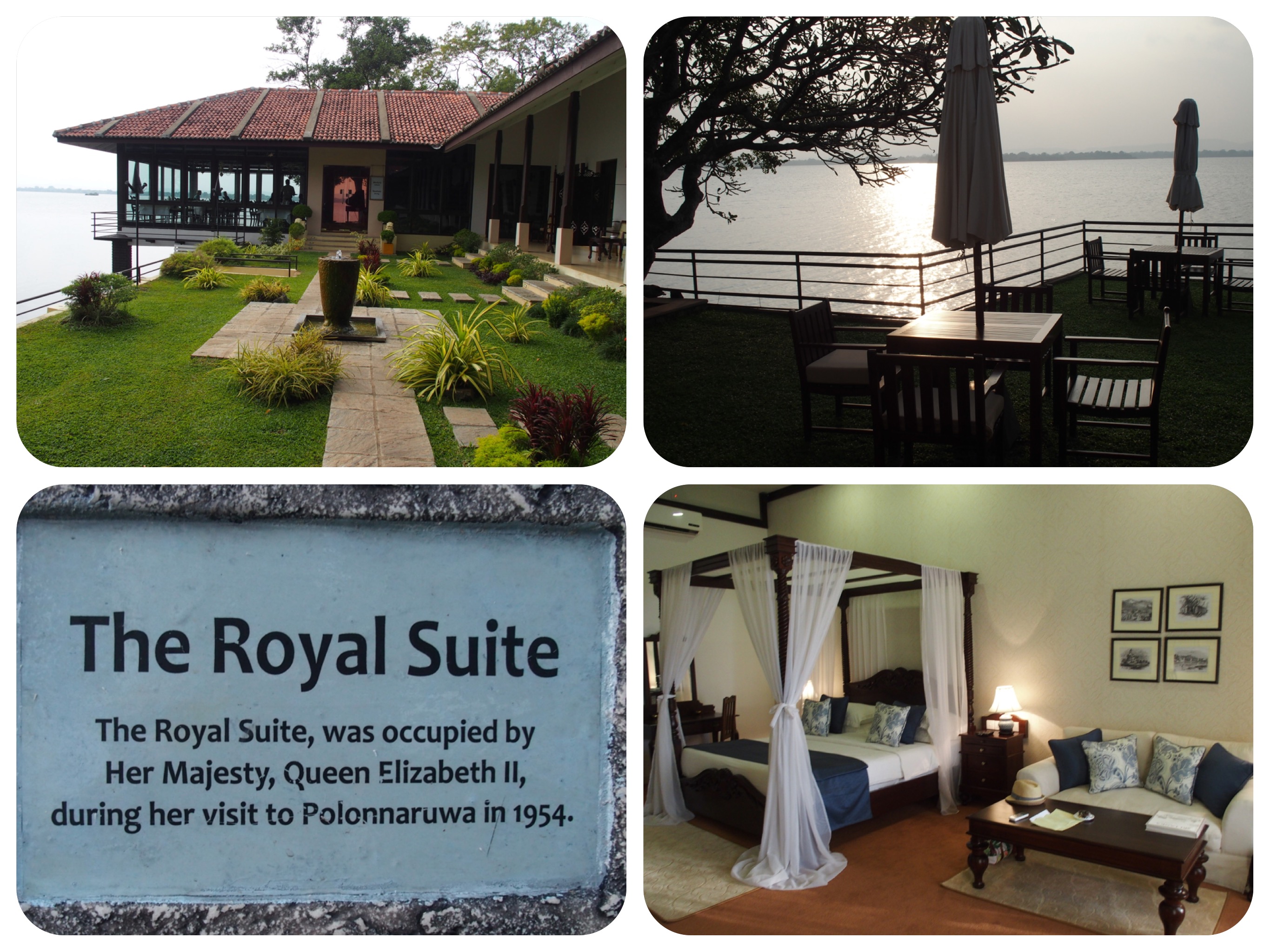 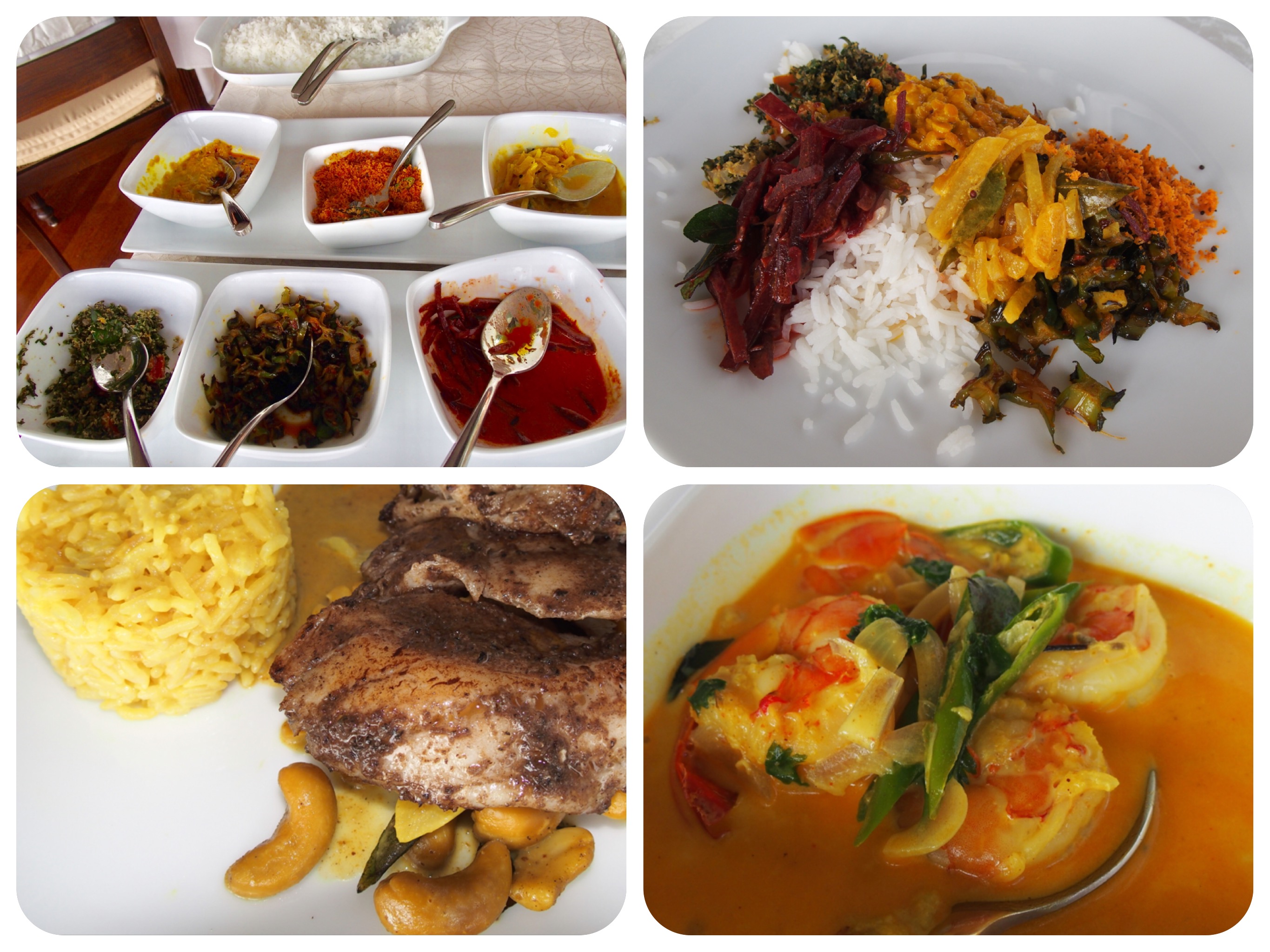 In the morning, I woke up to the sounds of monkeys jumping on the roof of our hotel room.
Through the window, I saw the hotel owner making an early morning puja to the gods, to bring success and abundance to his business.
He was using a wand made of flowers, a wood stick and incense, twirling it around the stone god he had decorated with flowers.

I couldn’t help but think to myself that he would have better luck ensuring the success of his small guesthouse by using better quality towels, not rough, overly used ones, better white bed linen, a better mattress that is not lumpy, offering a good quality afternoon tea for a fair charge, and finishing the construction zone around the pool and rooms.

In other words, before we pray to the gods for blessings and success, we must do all that we can to ensure success ourselves.

He might not have a good business sense, but he was no doubt a very sweet man.
He gifted me a small Buddha when we checked out.

We drove south towards Avukana, to see the large stone Buddha temple.

The Avukana statue is a full body standing statue of the Buddha near Kekirawa in North Central Sri Lanka.
The statue is a bit more than 40 feet high.
It was carved out of a large granite rock during the 5th century.
It is truly a magnificent statue with a beautifully carved face and lips.

The temple that used to be near it is now all gone, but the rock pond is still there as well as a stupa.
We bought lilies and placed them at the foot of the Buddha with our gratitude for all the many blessings in our lives.

Our next destination is the ancient city of Polonnaruwa.
The drive there was through green rice fields edged with banana plants and coconut trees.

We passed by a very old irrigation reservoir that still irrigates a massive amount of rice fields, as it has done for a very long time.

In a small town, we saw white banners all over the main Street and many people dressed in white.

I asked our driver what was going on.

“It is a funeral, Madam.
They are all coming for the funeral.
It is the funeral of a government minister’s daughter.
There is her photo on the banner there.
Yes, she was young.
It is the dengue, Madam.
She died from Dengue fever from a mosquito bite,”
said our driver.

“How do you know all this,
When we just drove into this town?”
I asked with amazement.

“It is the Facebook, Madam.
We are all on Facebook.
We know everything in Sri Lanka,”
said the driver with a smile.

Farther down the road, we passed by two large lakes and natural wildlife reserves.

On the road by the large lakes, we saw makeshift stalls selling dried red chilies and bags of dried lake fish.

There were also stalls selling coconut juice, lime juice and corn on the cob.

Perhaps the most exciting thing was to see elephants roaming in the wild.
They came to the road from the wildlife reserve and attracted much attention from the passing cars.

We passed by many fields that had small tree houses perched in the trees.
These tree houses were more like simple huts.
I asked our driver what they were for; do kids play in them, or do poor people who have no houses use them as dwellings?

We asked our driver about marriage in Sri Lanka.
We asked if marriages are arranged or if the majority are Love marriages.

“It is both, Madam.
Some people, they have love marriages, but most are arranged marriages.
We do not use a match maker.
We put an ad in the paper.
For example,
Let’s say I have a daughter.
I put in the newspaper an ad that says I have a daughter who is 25.
She has a degree in accounting, I put it in the ad.
I offer her to a suitable family and groom.
I put how much money I offer as a dowry,
If I can give her a house,
Or how much money and gold jewelry I can offer,
And I ask only for families with similar boys to write back or call me.

Let’s say a family has a boy who also has a degree or a good job.
They also have the same amount of money, or gold or a house,
They call me and they come to my house to meet my daughter.
The boy and the girl, they get to know one another.
They can go out a few times, and if they agree, we arrange the wedding.

Most people marry people of the same religion.
They almost never mix religions.
Hindus marry Hindus,
Buddhists marry Buddhists,
Muslim marry Muslims.
I am a Catholic, Madam,
Catholic marry only Catholics.
If fact, we do not put a marriage ad in the national newspaper,
We put it in the Catholic Newspaper only.

Next Sunday she came for lunch.
My father, he loves her more than I do.
So it was all good.
My father, he paid for the wedding and reception.
My mother, she loves her too.
Very much loves her.
Now my parents they are both gone.
Passed away.”

We arrived in Polonnaruwa in the late afternoon.
Our hotel is a historic lakeside hotel with large spacious rooms decorated with Victorian touches.
It has an elegant restaurant on the lake with windows from which I could see large salamanders swimming among the kingfisher birds.

The shower was divine and it was refreshing to sit by the lake, eat good food and enjoy a good pot of tea.

I think people who sightsee, tend to rush too much.
A big part of traveling is the rest and the quiet times, which I try to build into our traveling days.

Wishing you a wonderful day full of blessings,
Tali

← Mihintale, A Holy Buddhist Mountain In Sri Lanka
An Amazing Hindu Temple, and other sights in Trincomalee, Sri Lanka →