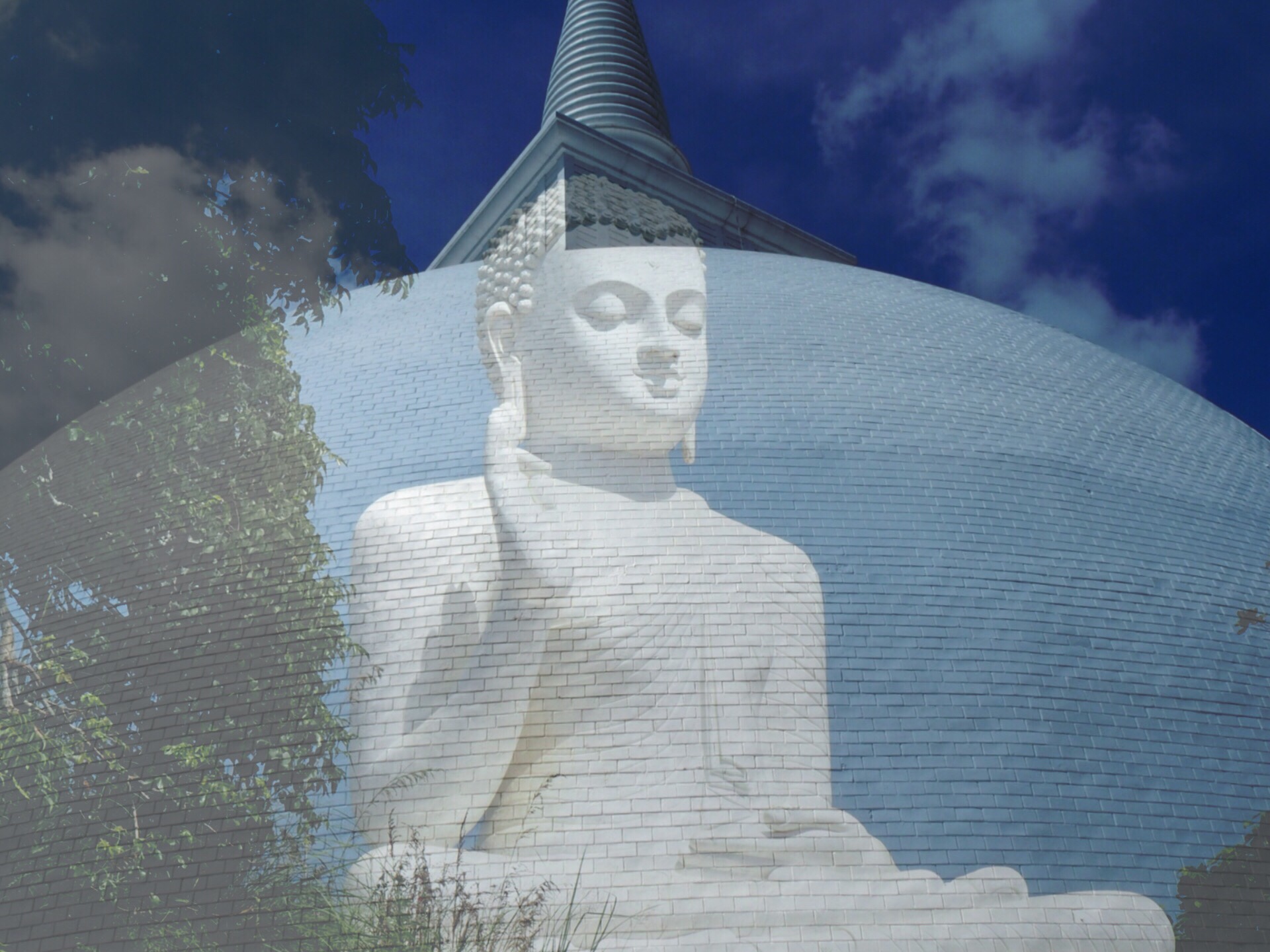 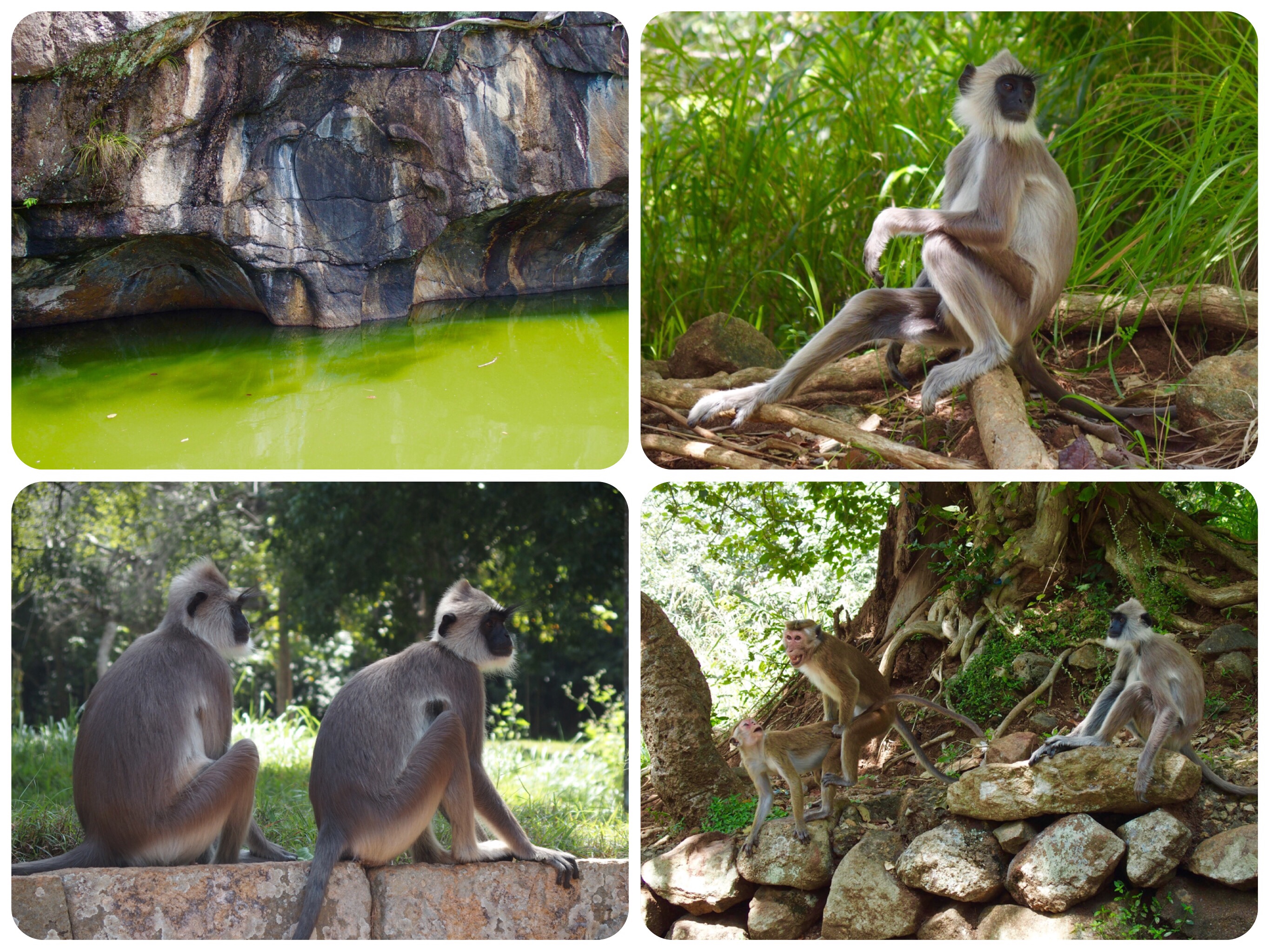 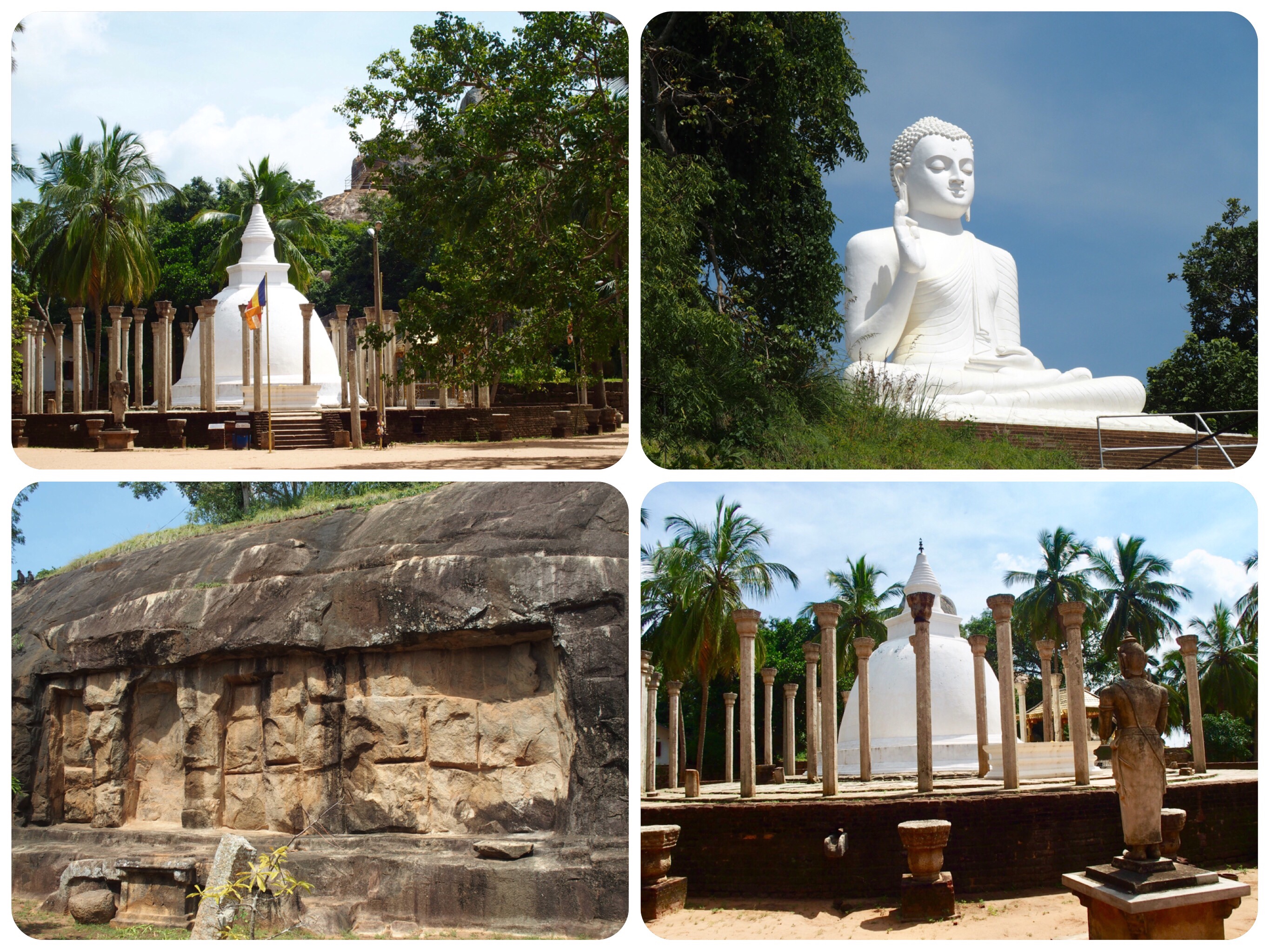 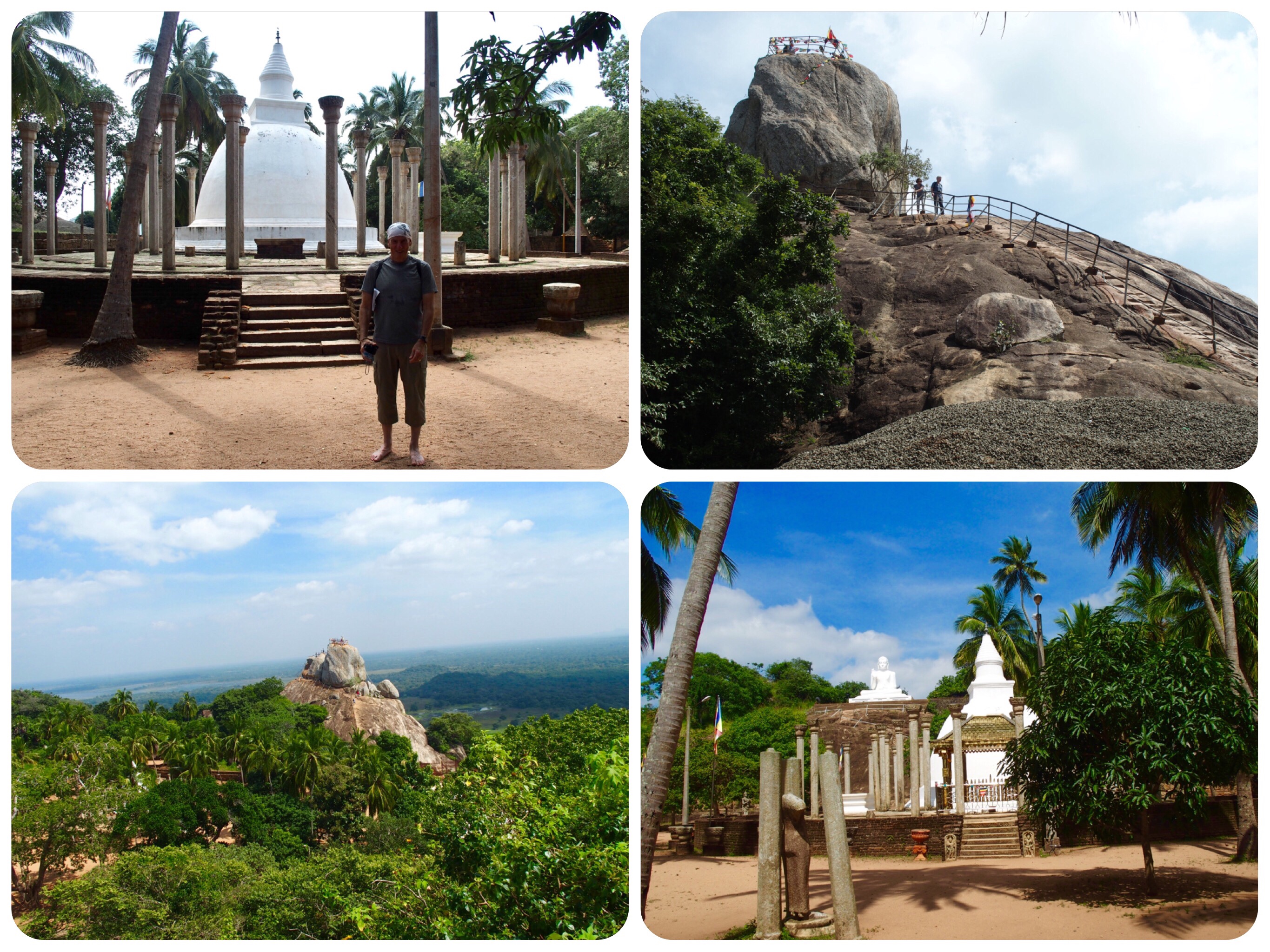 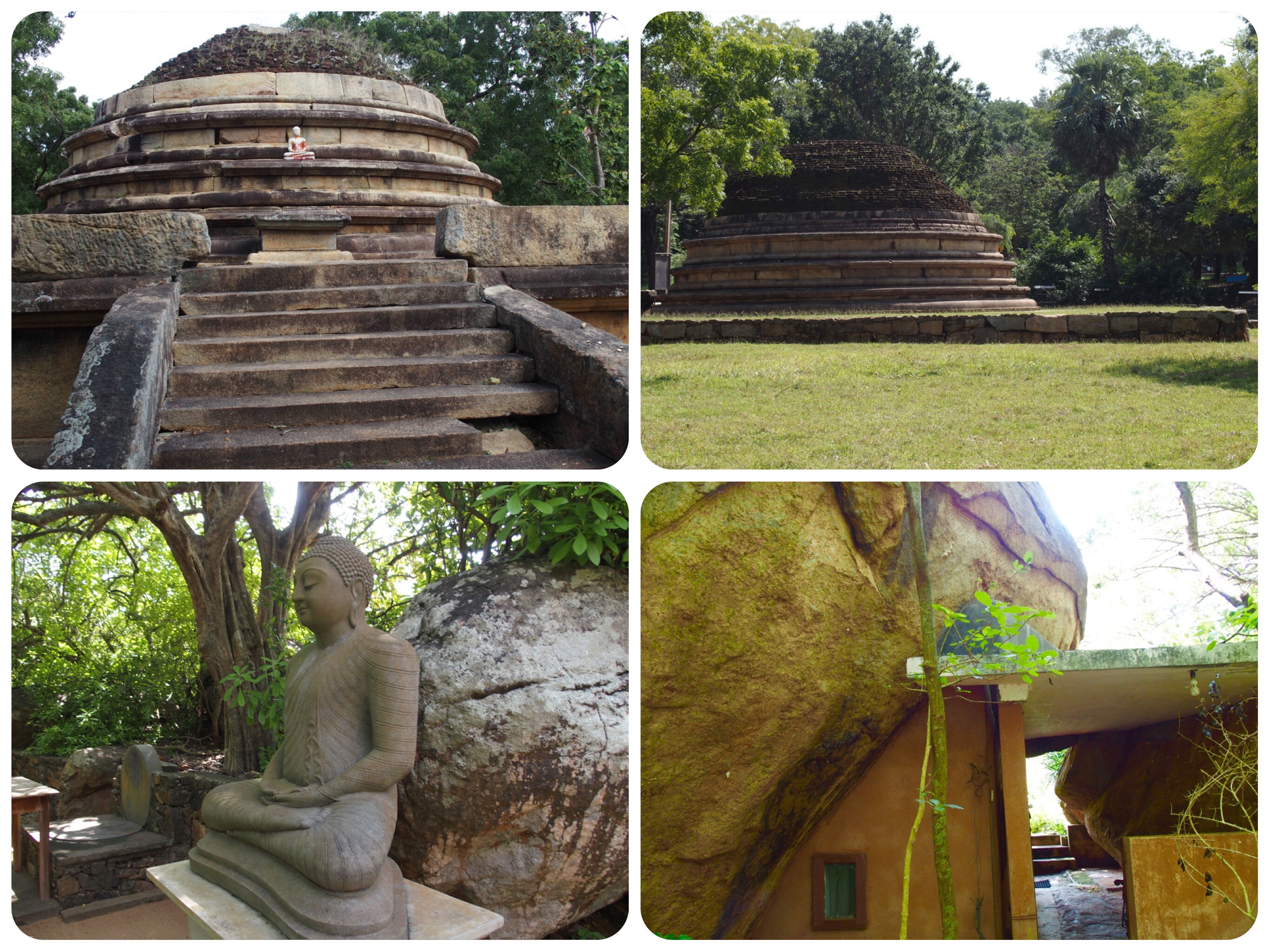 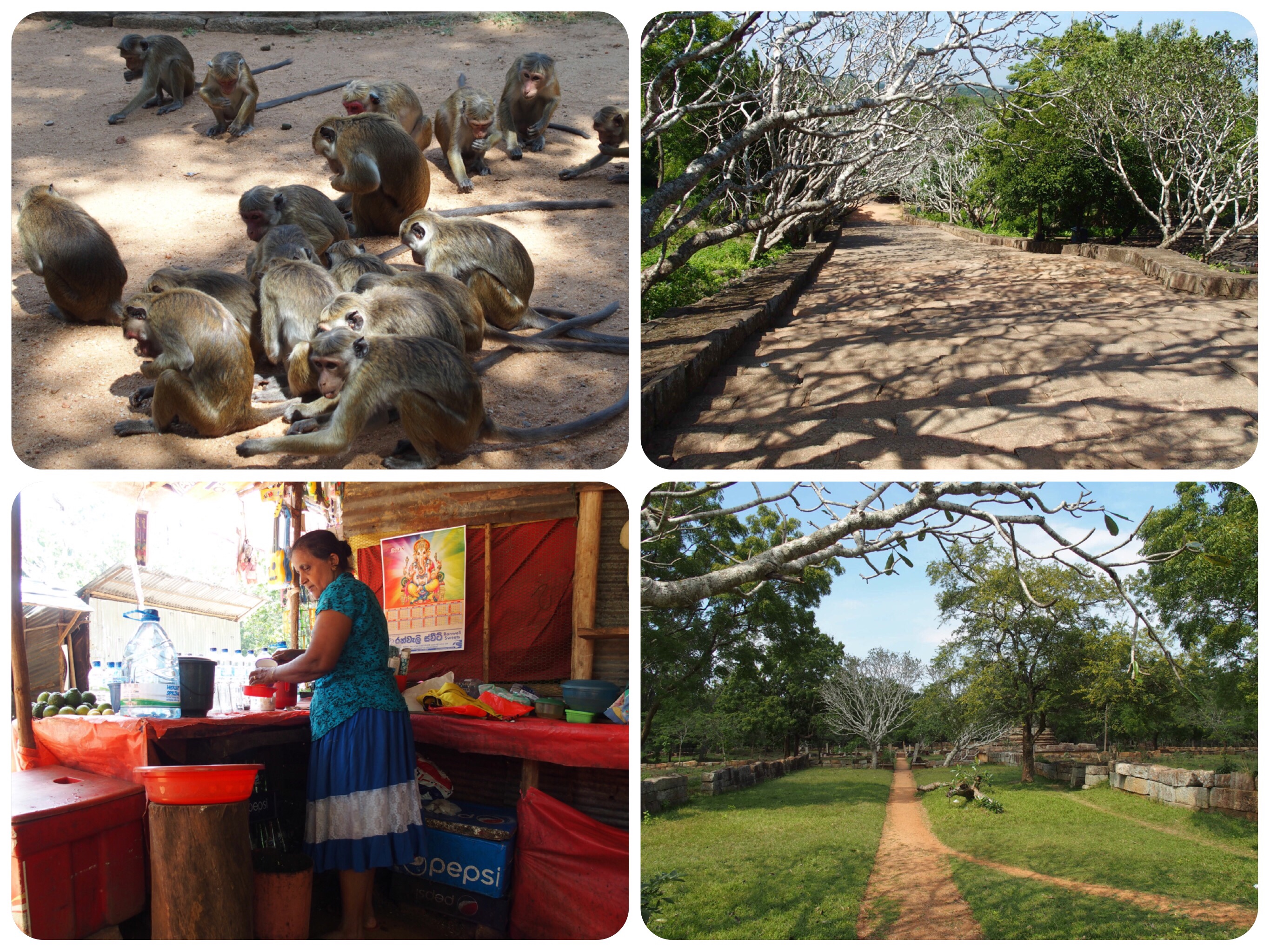 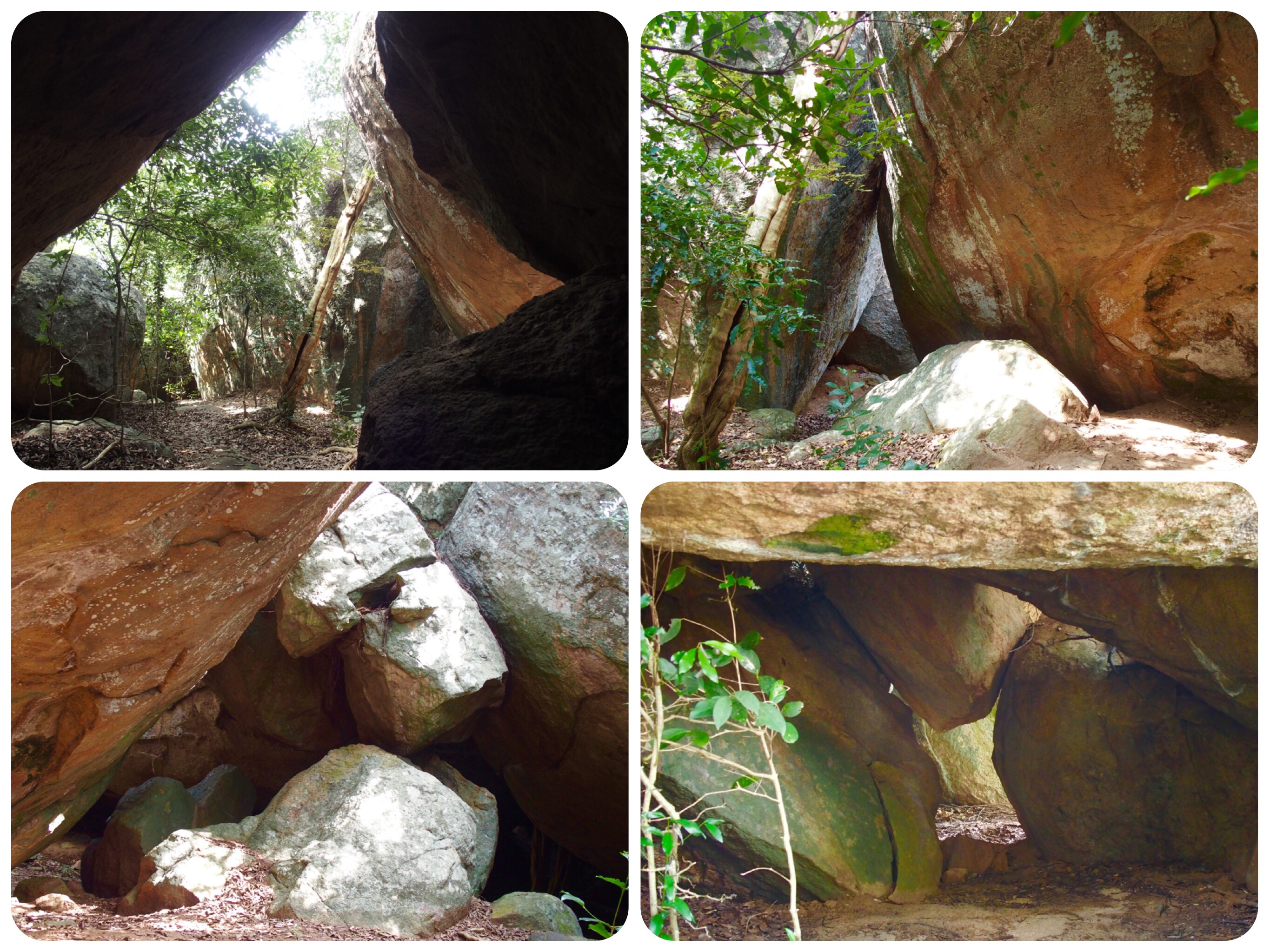 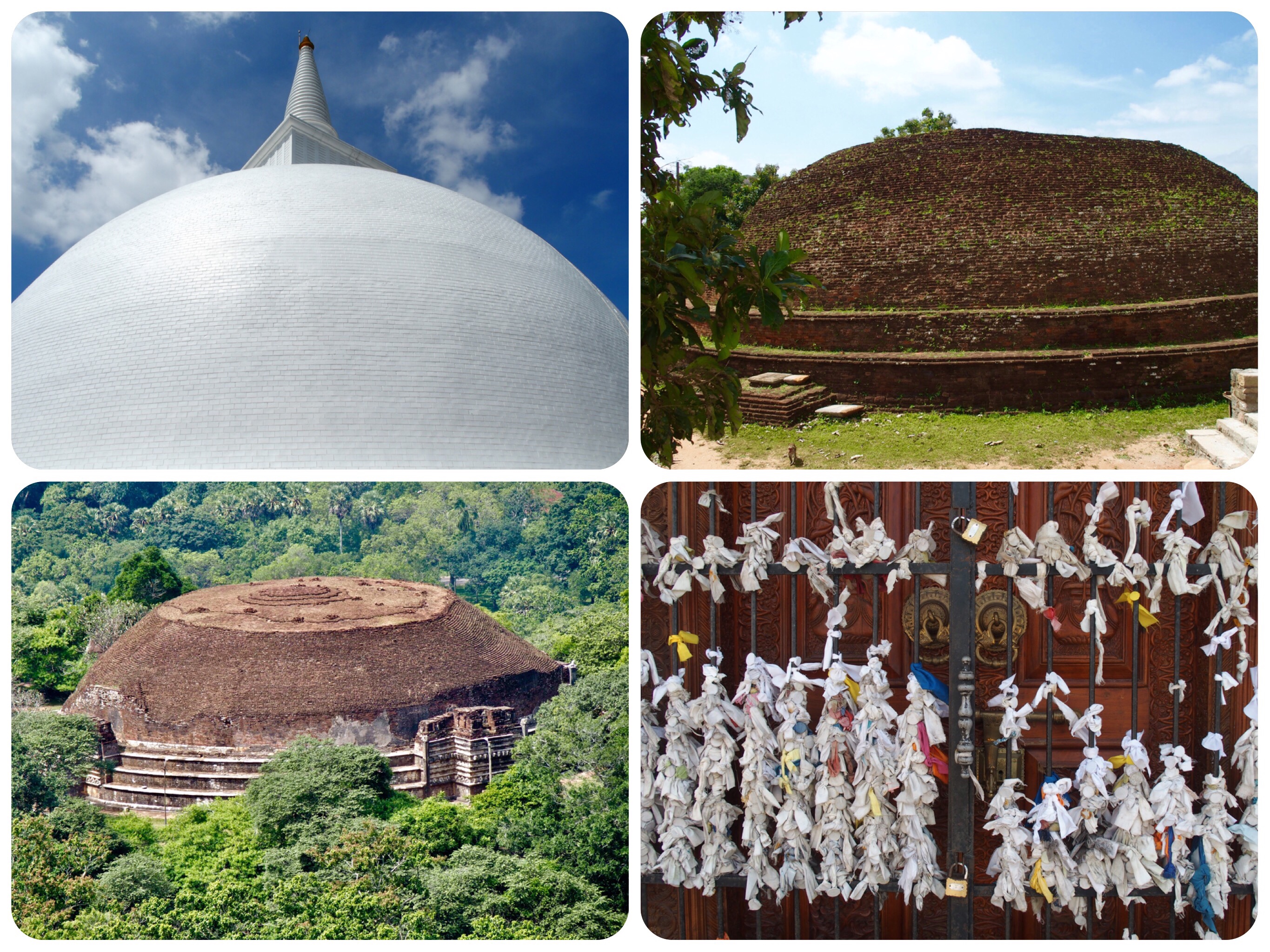 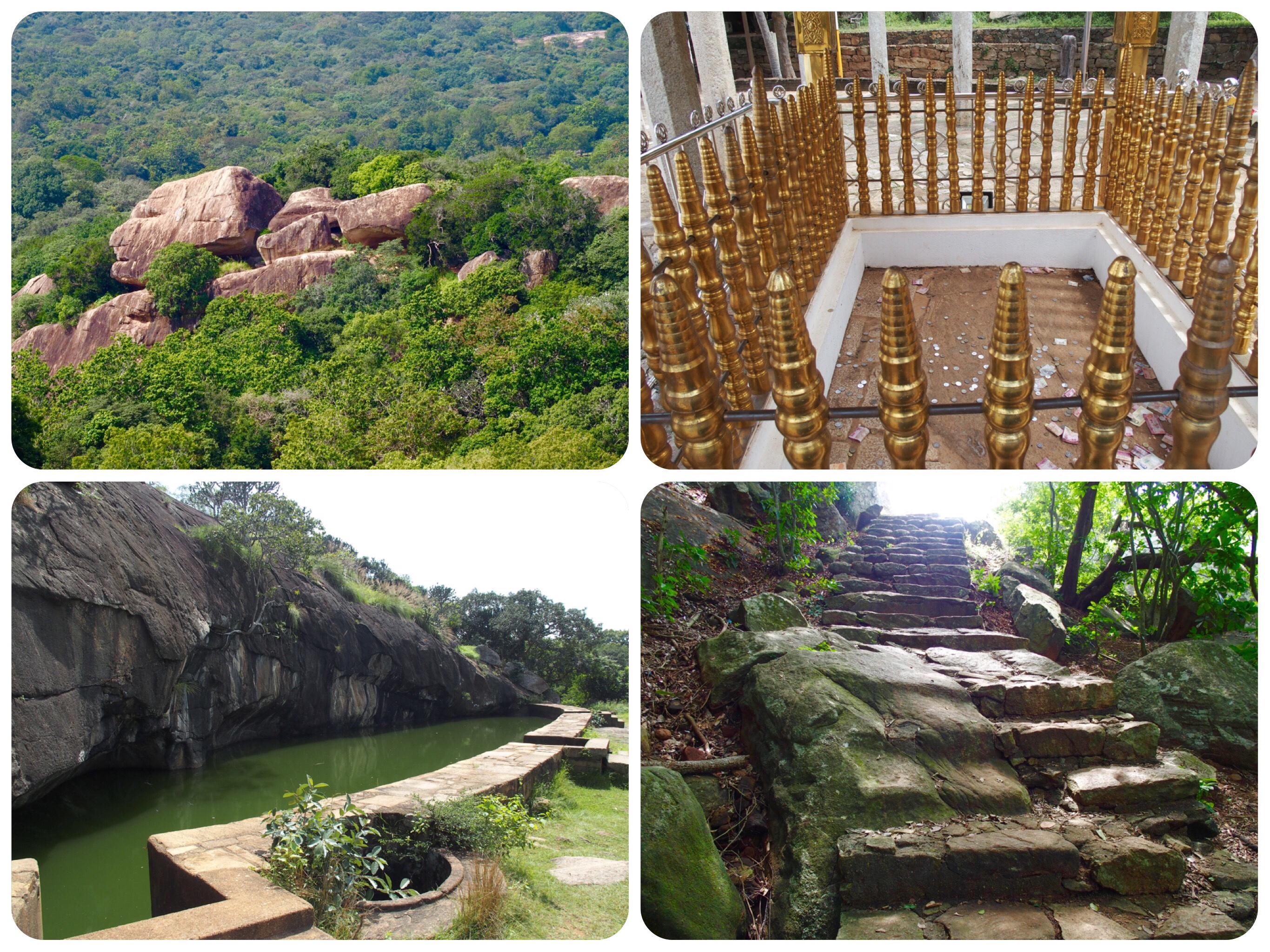 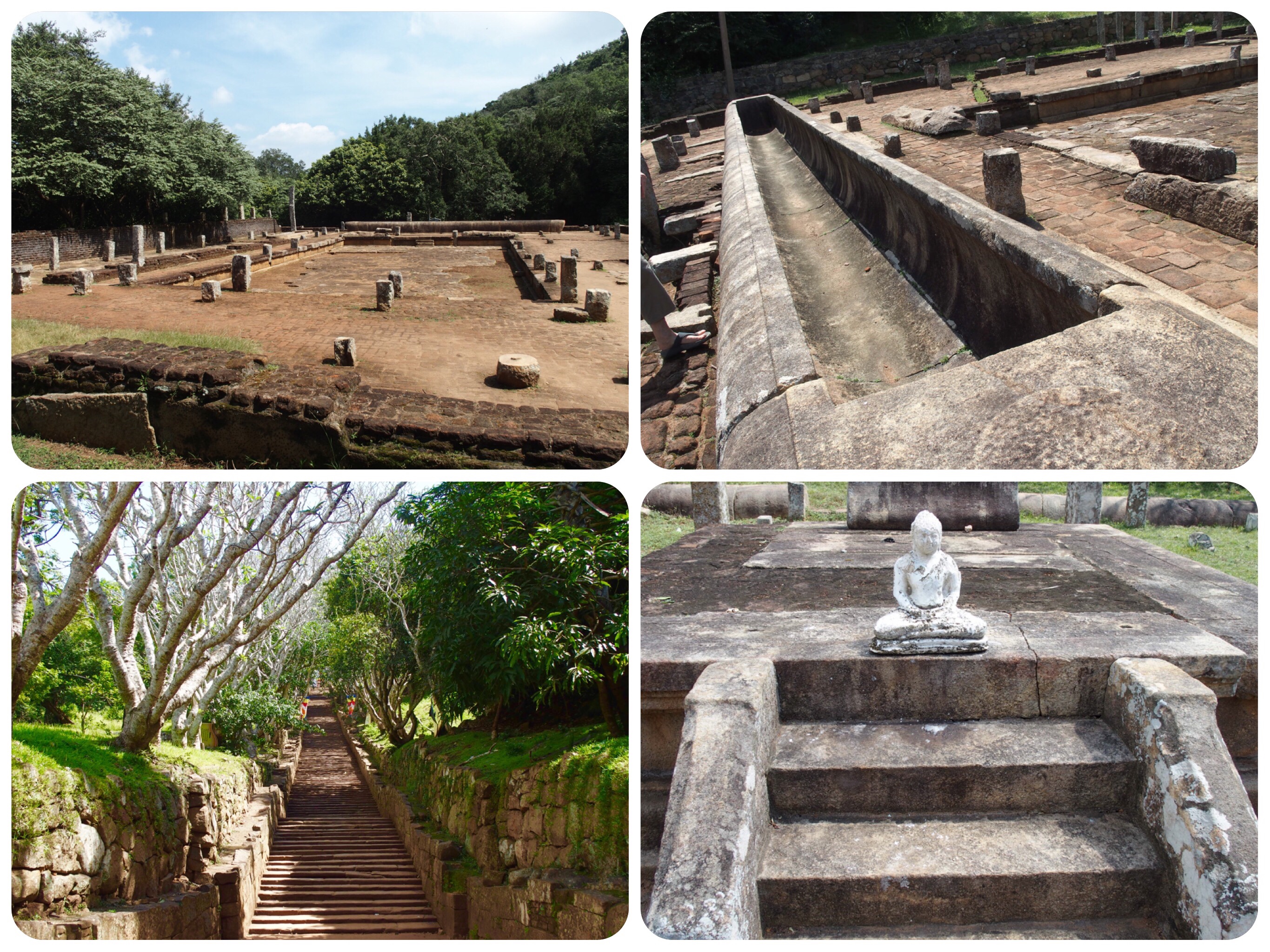 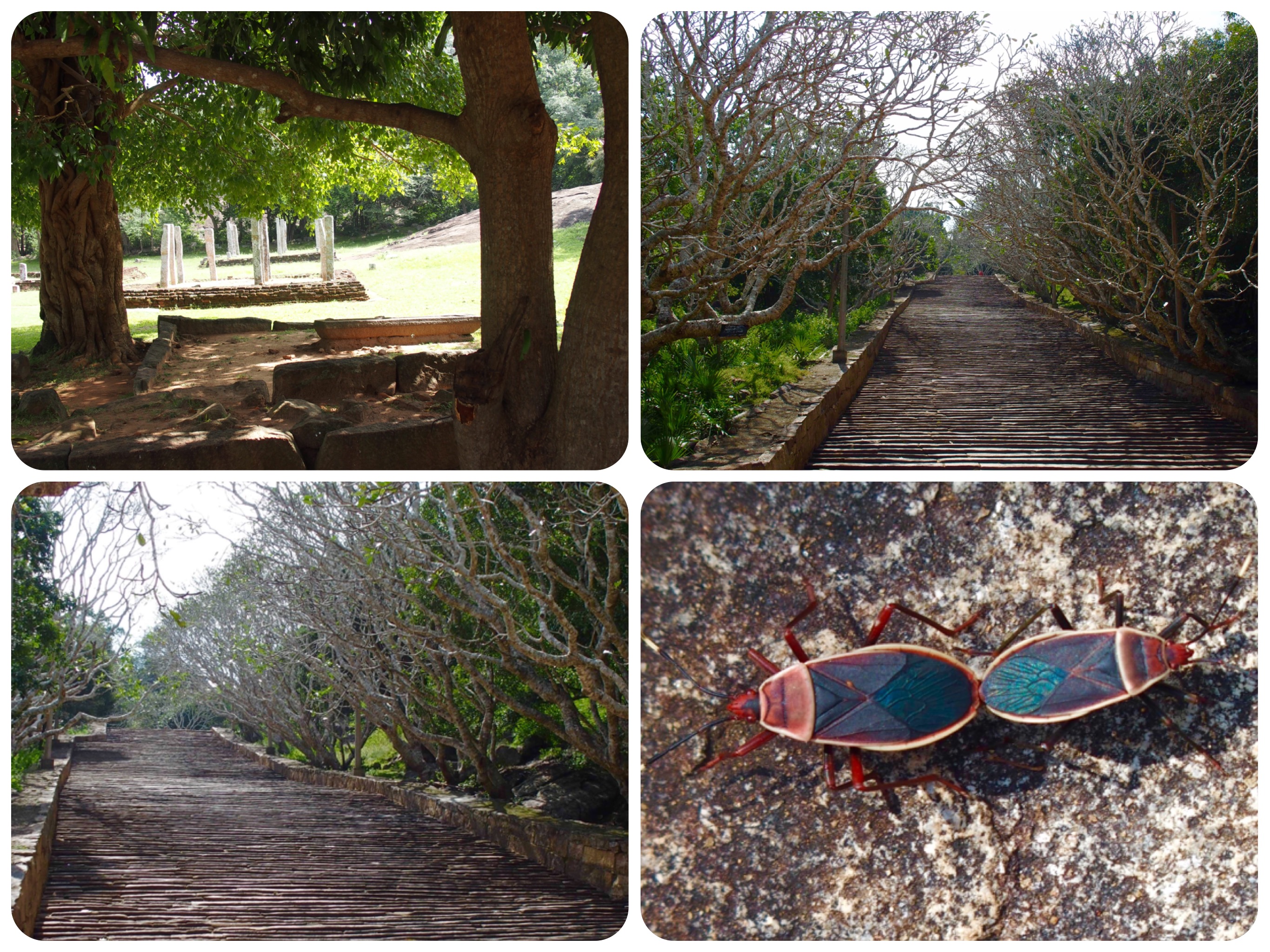 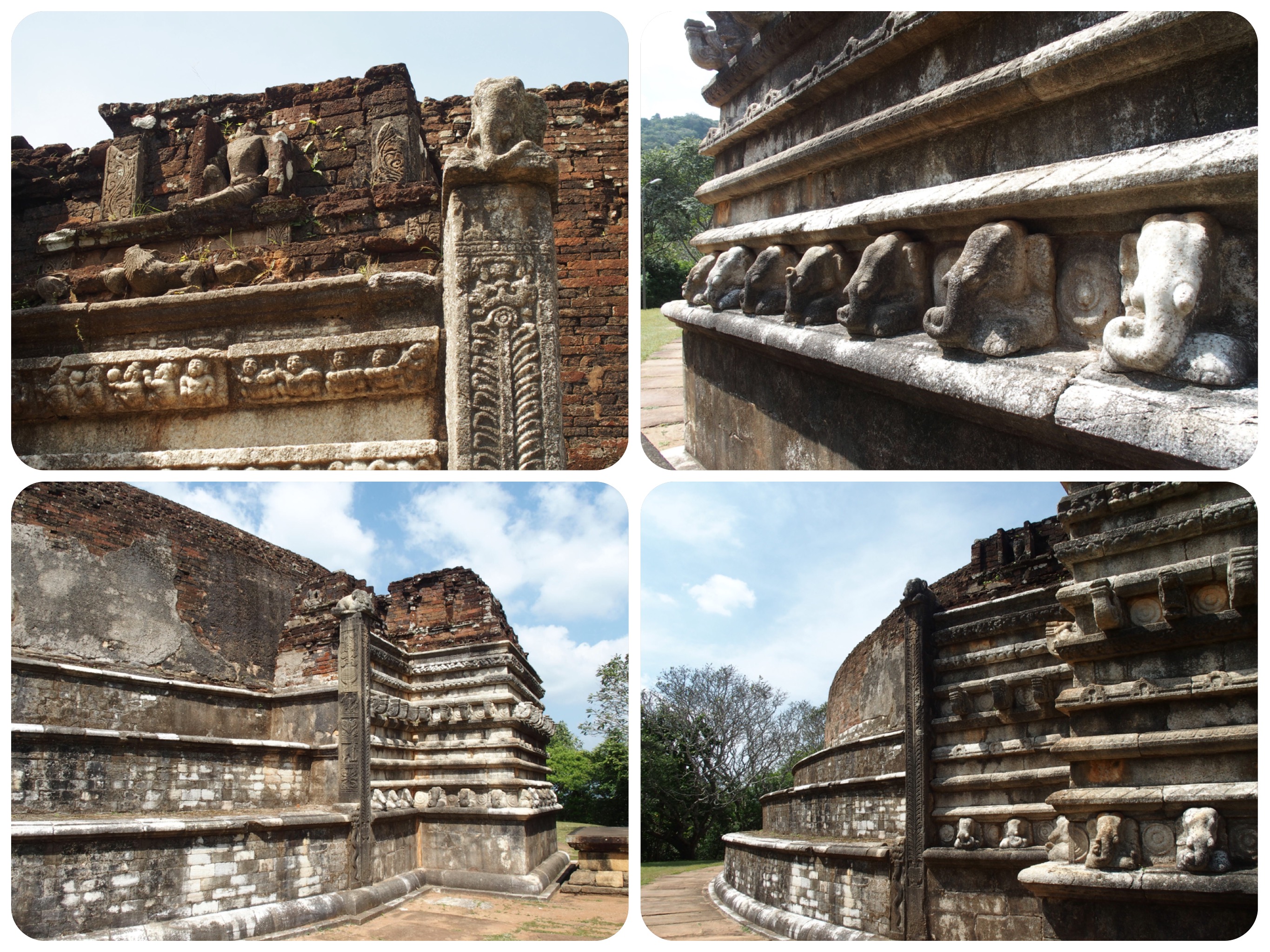 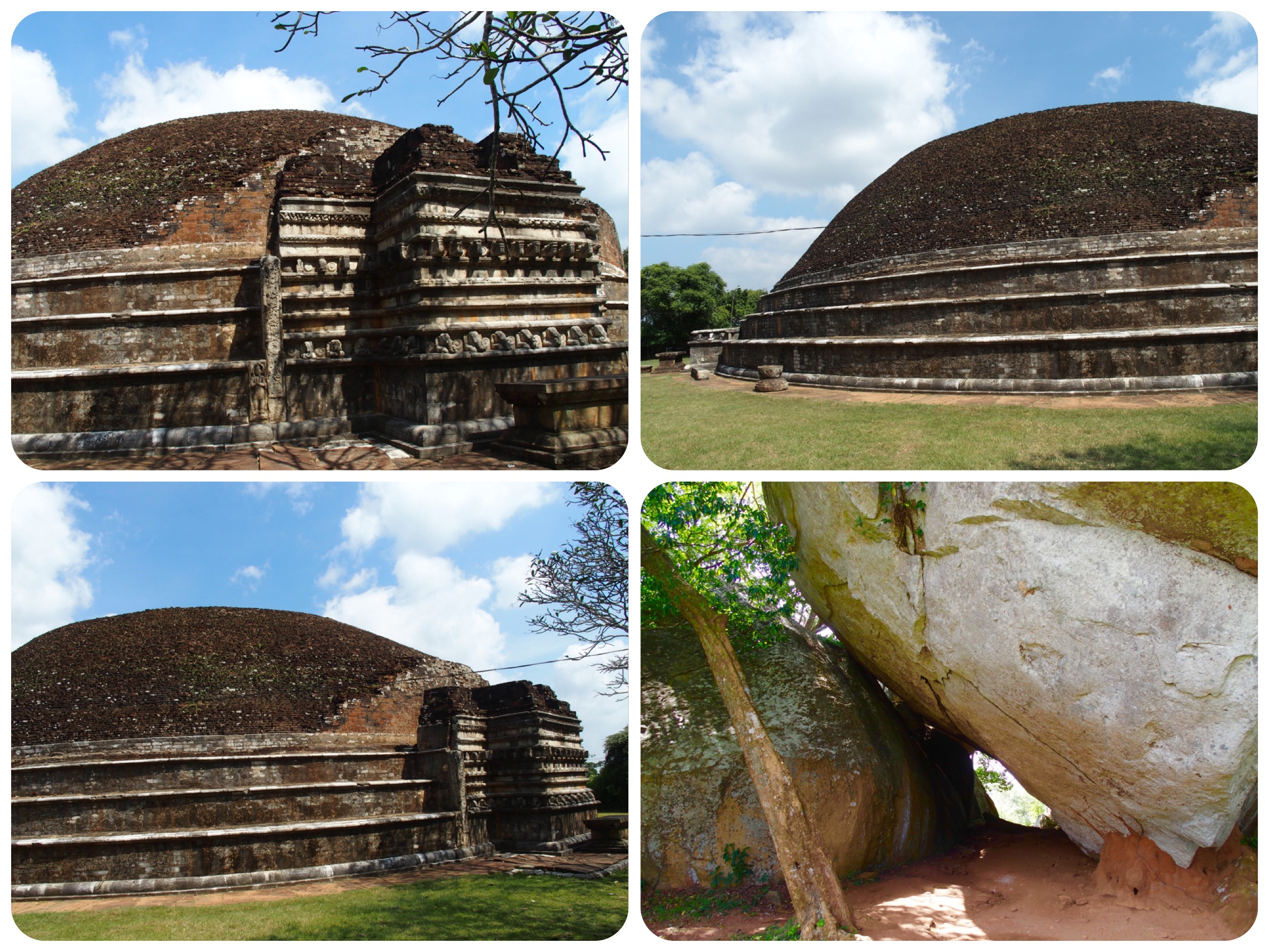 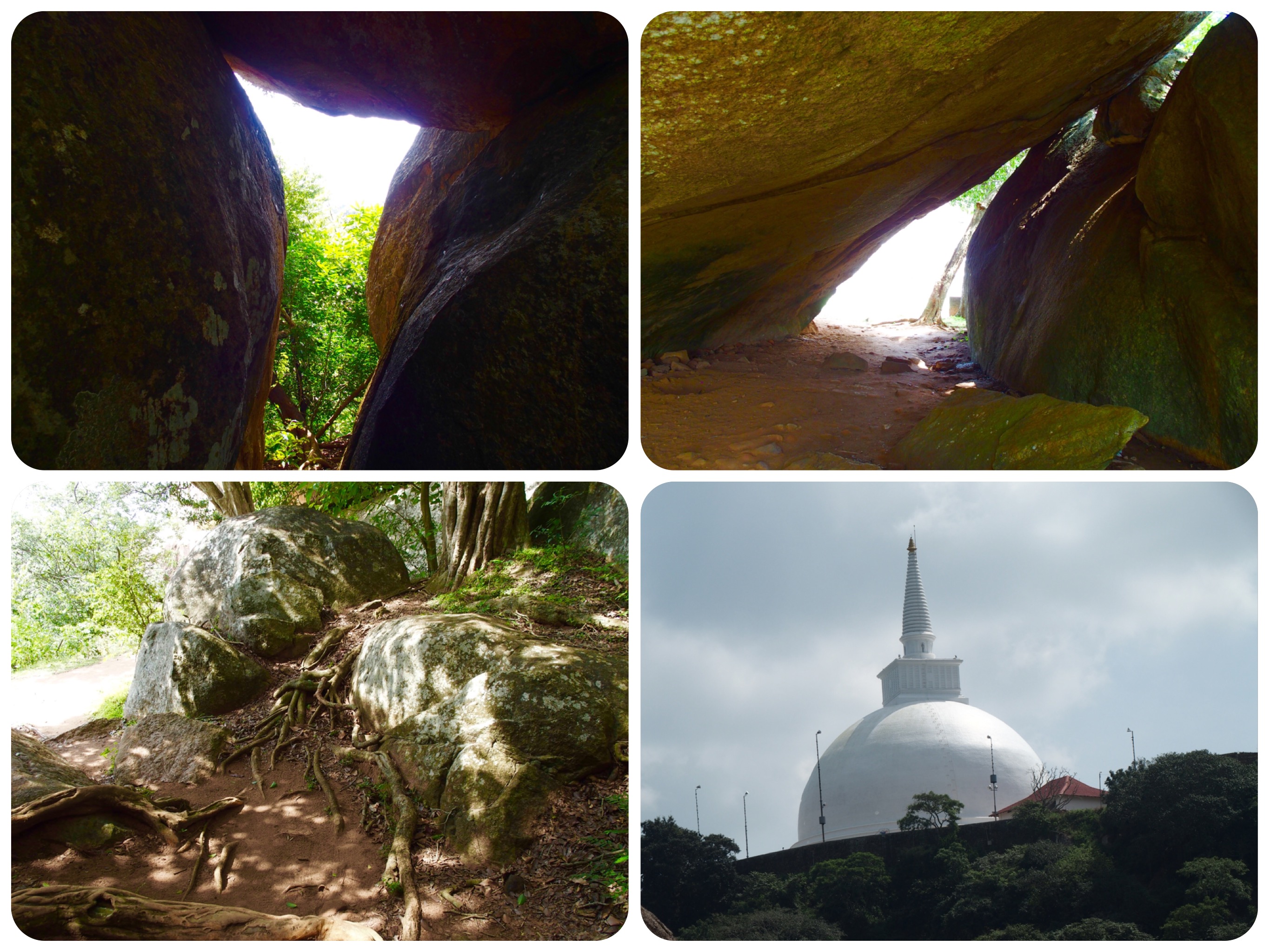 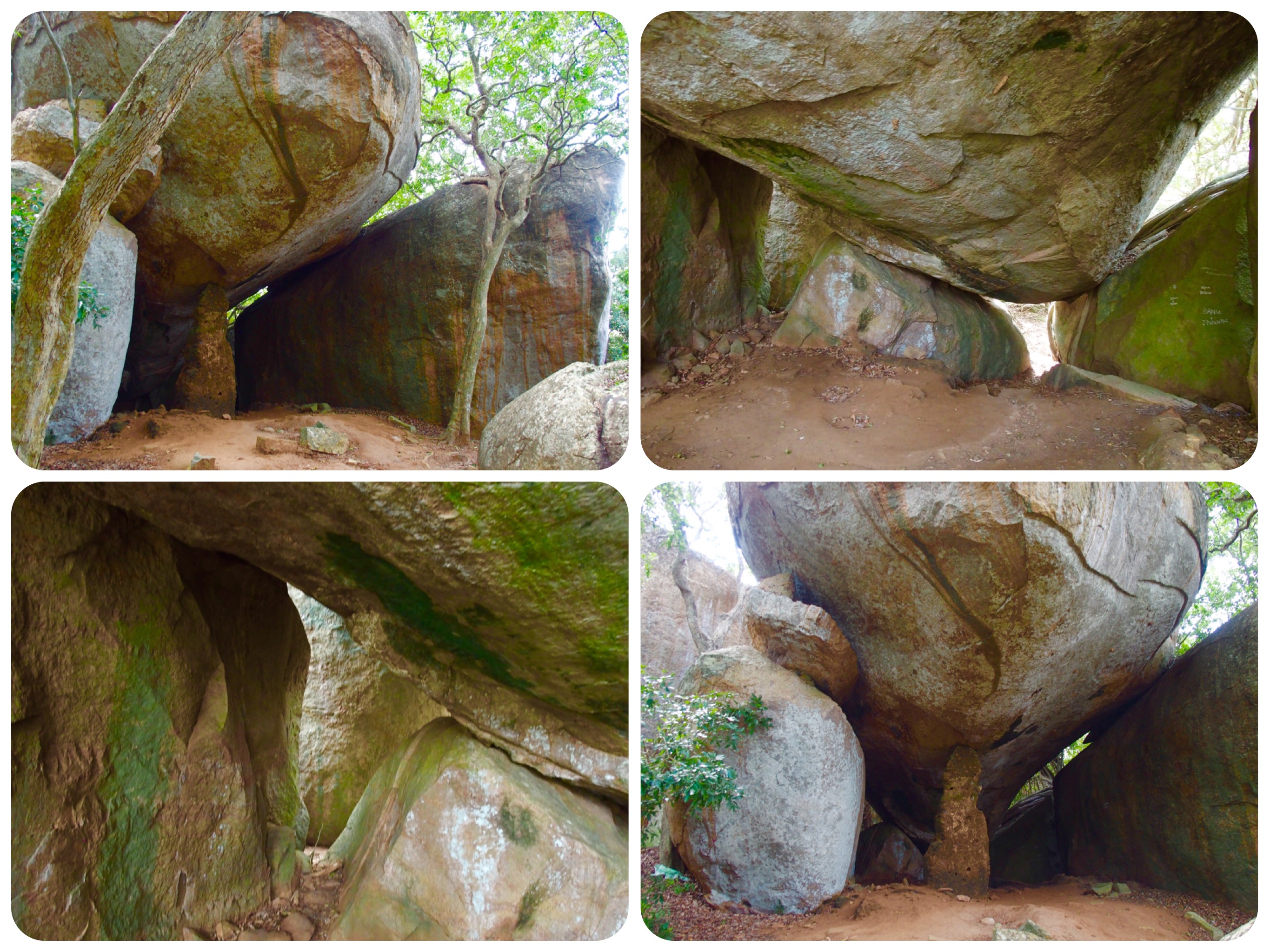 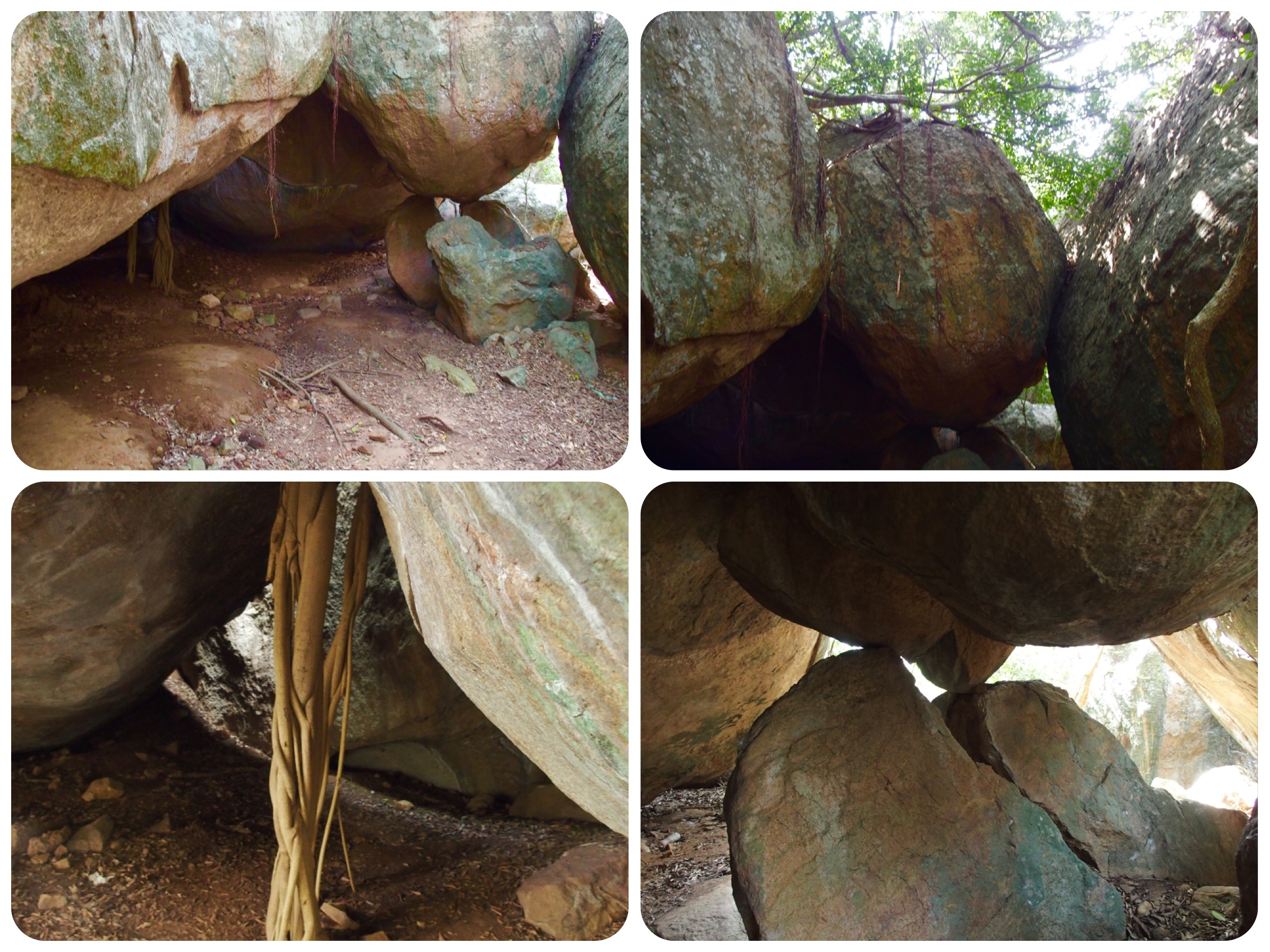 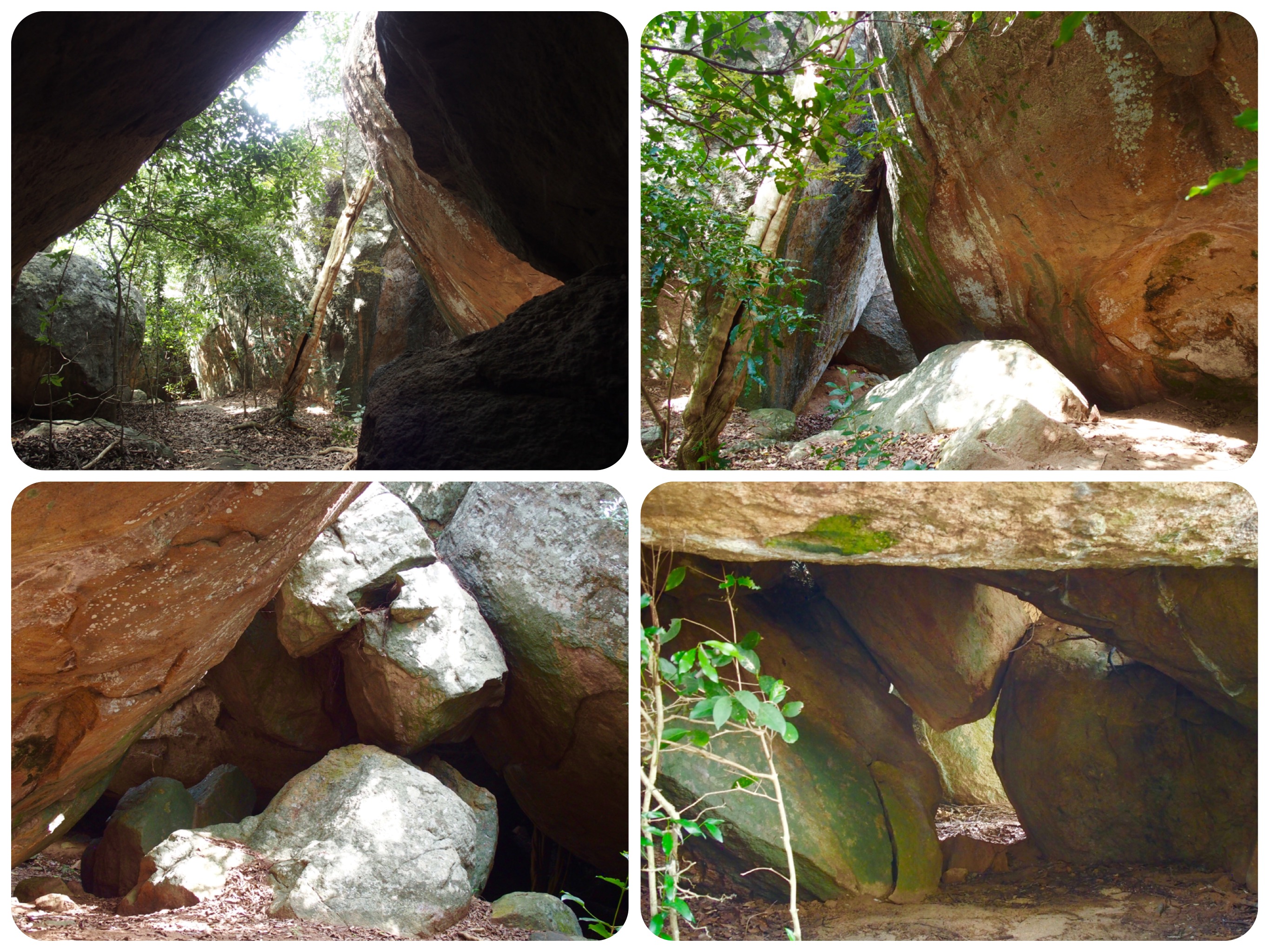 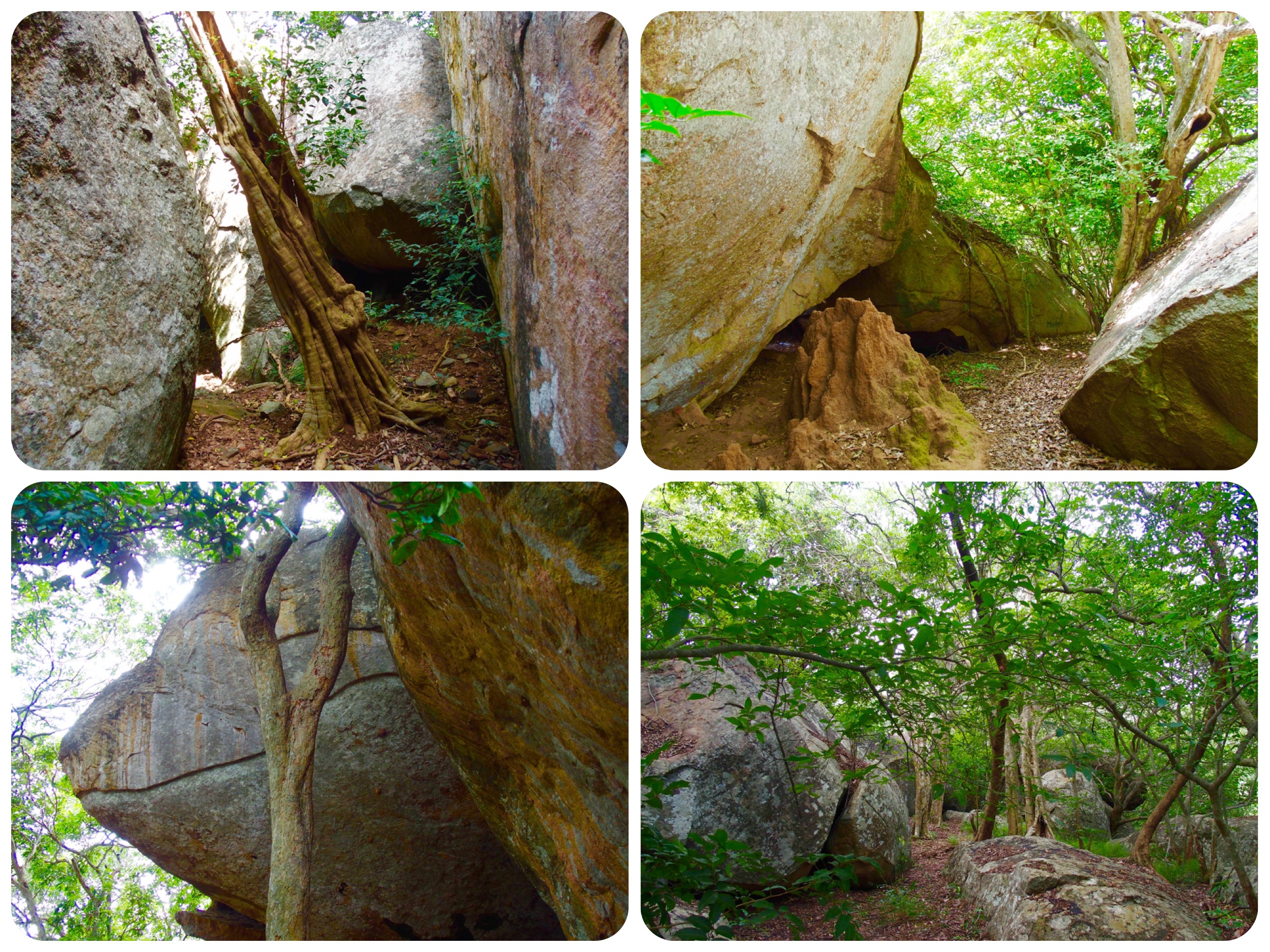 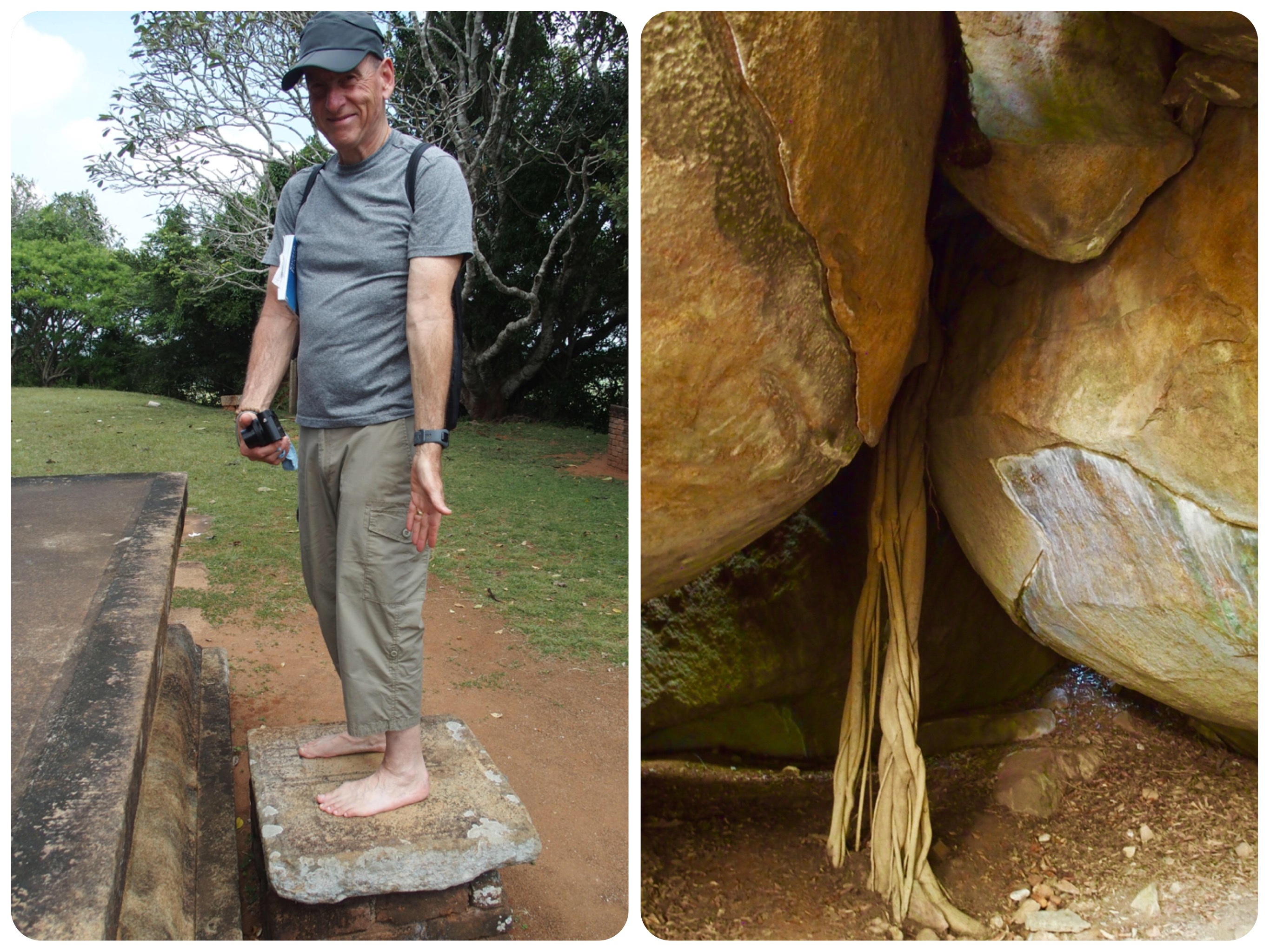 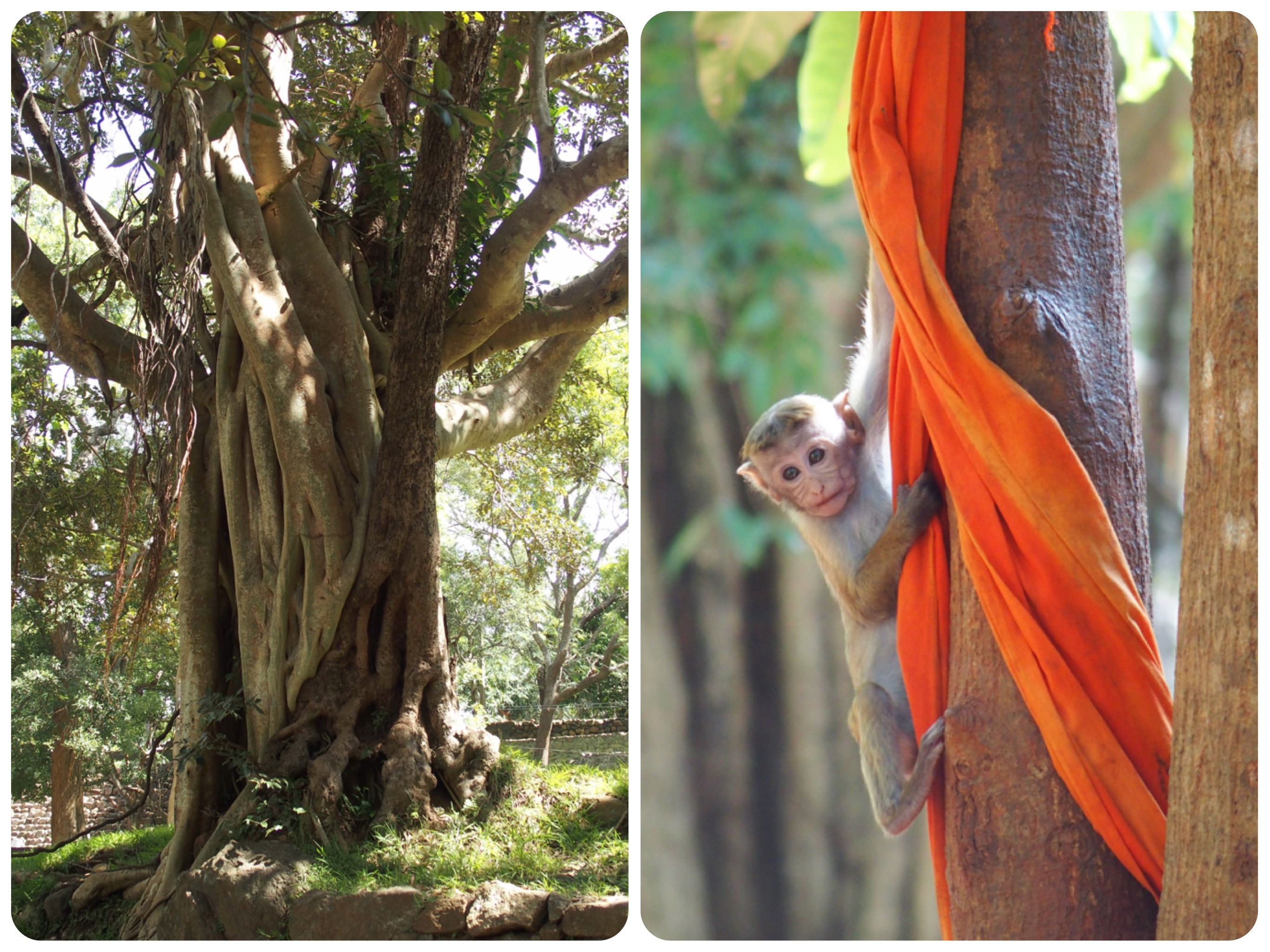 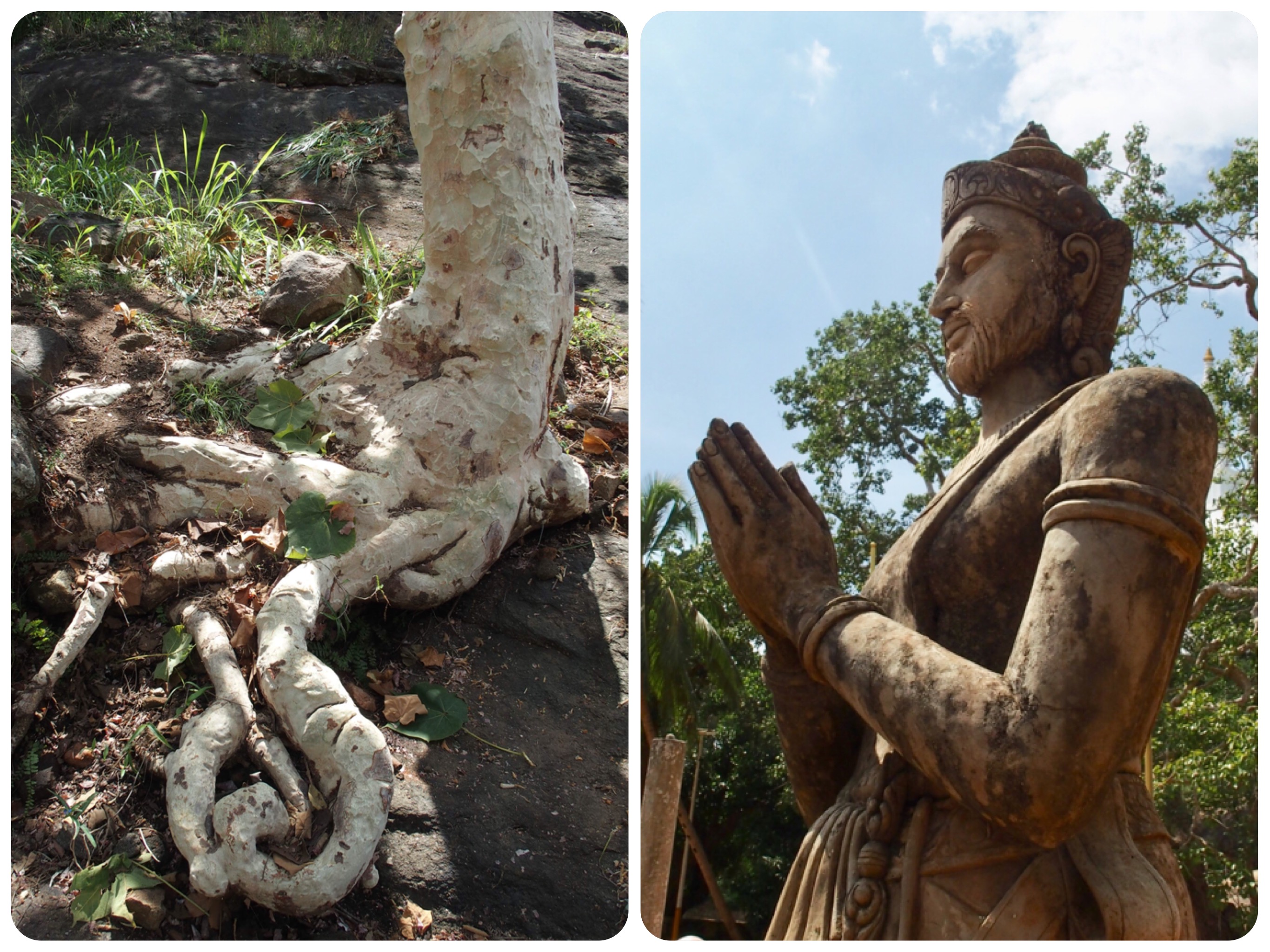 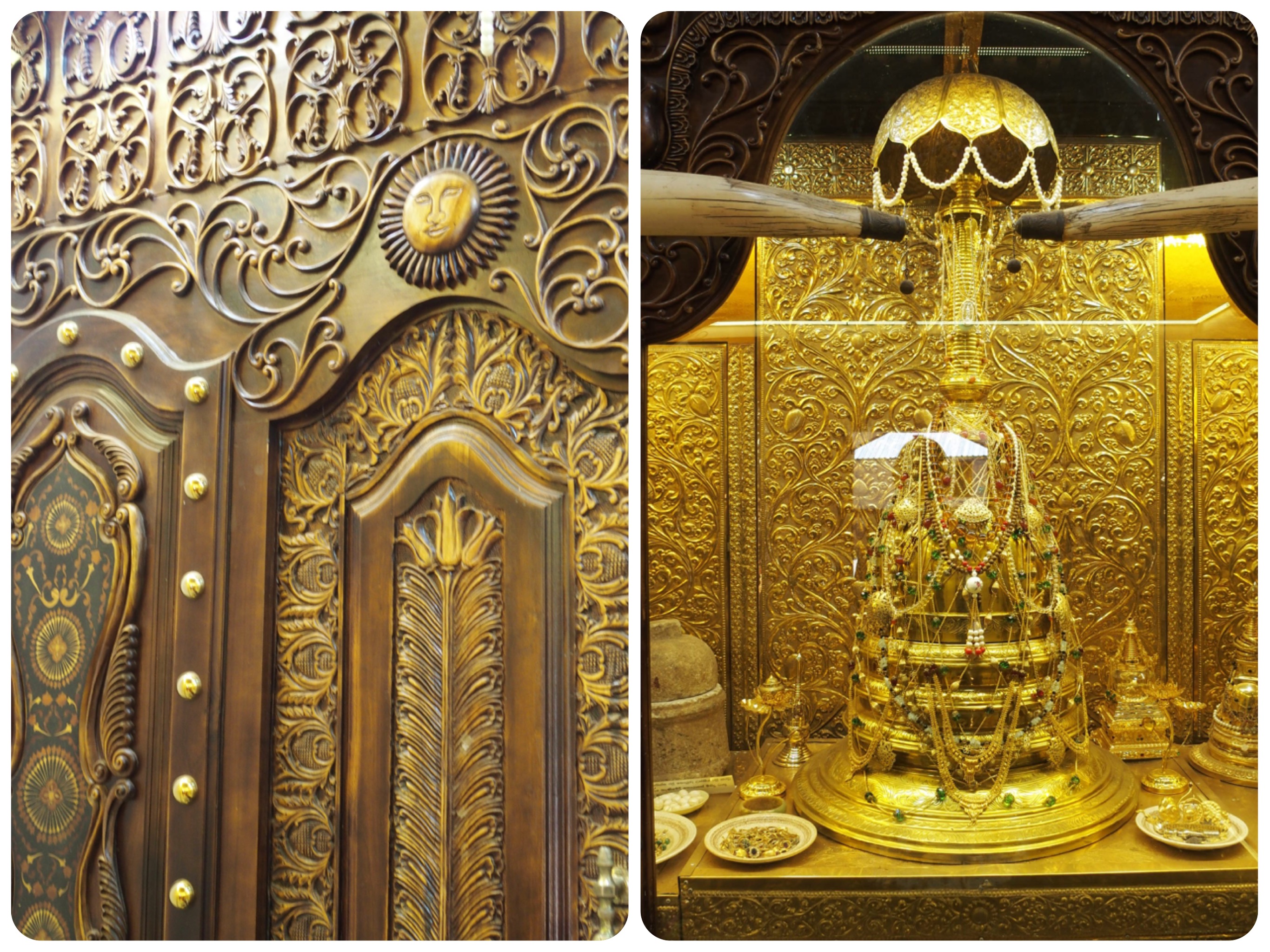 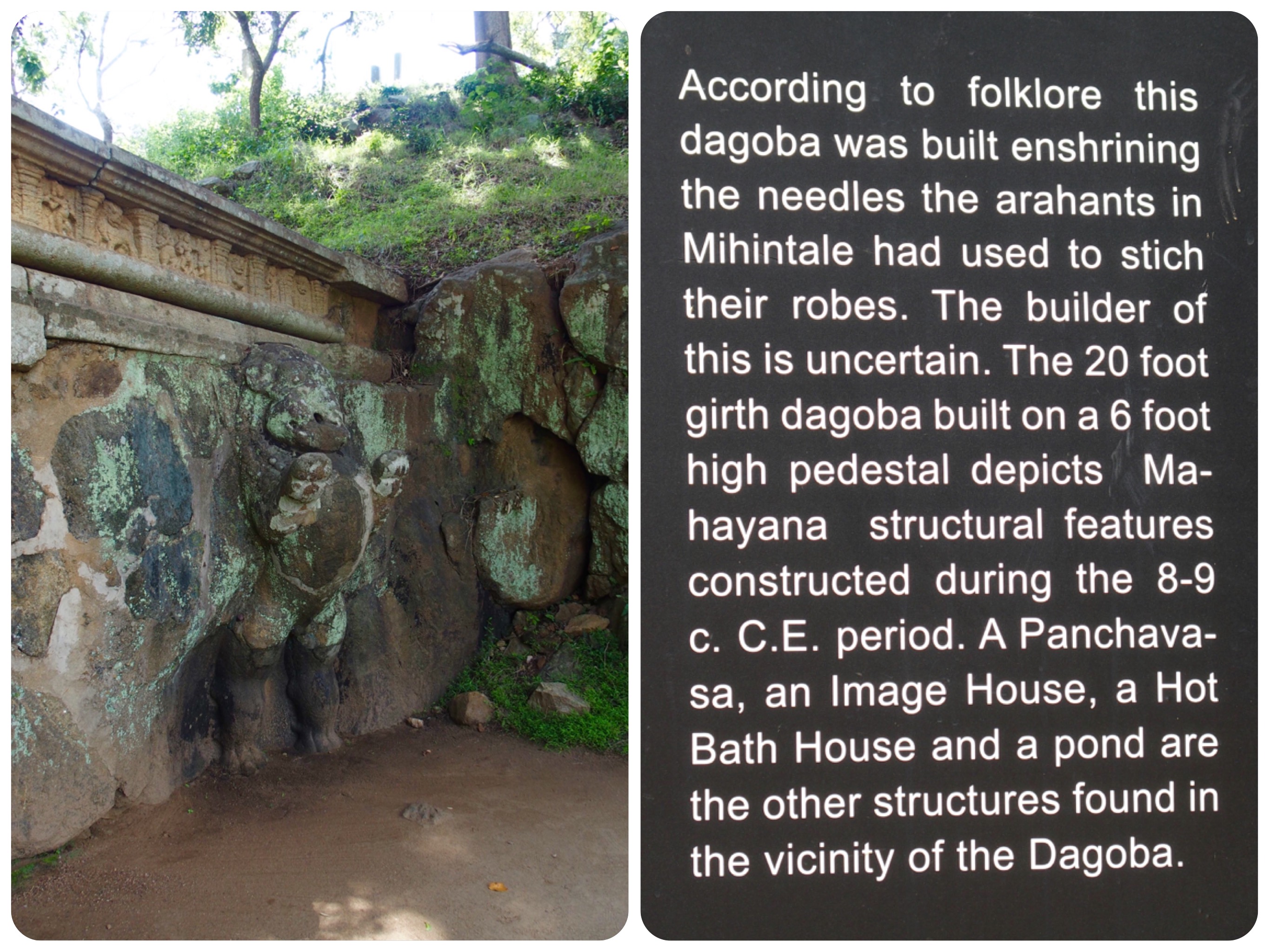 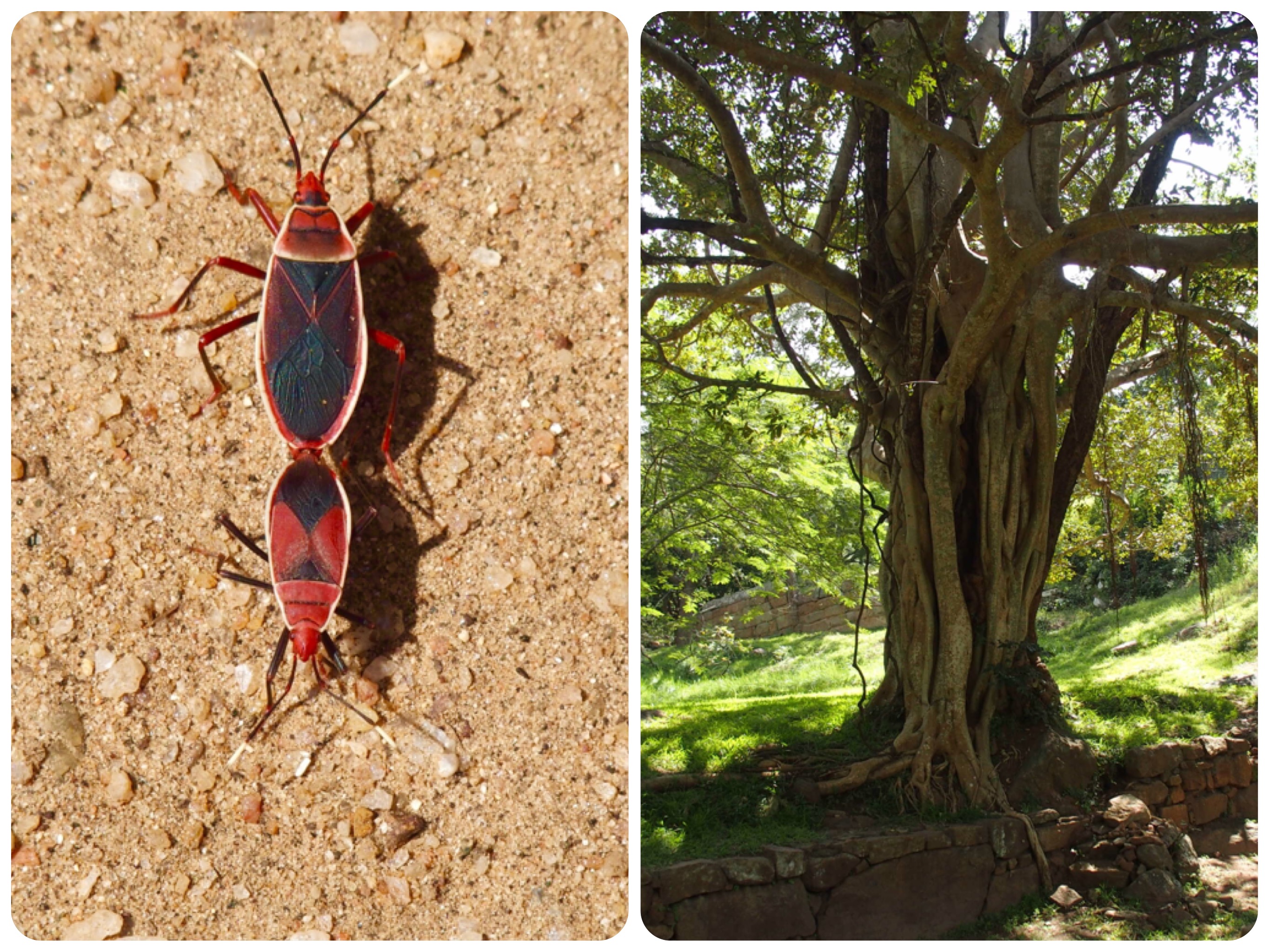 When we booked our three night stay in Anuradhapura, we intended to use it as a base to visit many nearby Buddhist sites.

Mihintale is a sacred forest mountain located only 12 km. east of Anuradhapura city.
It dates back to the 3rd century B.C.E.

It is believed that In 247 BCE, King Devanampiya Tissa met the Arahat Mahinda here.
Mahinda the Arahat was the son of the famous Buddhist emperor Ashoka.

An Arahat is a Buddhist term for a Saint, or an advanced Spiritual Master who has achieved full enlightenment and possesses some of the Siddhis, or spiritual powers.
Mahinda the hermit monk radiated so much love, that inside his cave a snake and a mouse lived in harmony for years.

When I heard this, I thought about all the yogis and yoginis I have met who claim spiritual advancement, but have so little love for people who are difficult or are not yet spiritually developed.
I know that they are not practicing love and forgiveness, but are still following the path of the ego, believing they are separated and perhaps superior to others.

It is said that the Lord Gautama Buddha himself visited Mihintale on his third visit to Sri Lanka (the place was then called Missaka Pabbatha).

Being one of the sixteen places that the Lord Buddha visited in Sri Lanka, Mihintale is thus regarded as a holy mountain.

Mihintale spreads out from the lower villages and extends all the way to the mountain’s summit.
At the bottom, there are the ruins of an ancient hospital, believed to be one of the oldest ruins of a hospital in the world.

According to records, doctors administered leeches, mixed and ground herbal medicines, and treated patients by soaking and submerging them in fragrant bath oils.

Up the grand stone staircase, a pilgrim must climb thousands of steps to visit the most sacred parts of Mihintale.

The long and wide staircase is lined with frangipani trees spreading their white flowers on the steps.
Large and healthy mango trees grow among the forest trees and coconuts and banana plants are abundant.

These fruit trees were no doubt part of the diet of the the hermit monks who lived in the many meditation caves that dot the mountain.

There is also an Alms Hall, to which ascetic hermits and reclusive Bikkus came to receive food, before returning to their meditation caves.

As we climbed up the mountains we saw many monkeys jumping among the temple ruins and among the old stupas.

The meditation caves are set among very large rock formations.
Some of them were enclosed with red bricks, but most of them are simply sheltered naturally, by the massive boulders which lean on one another and naturally create perfect airy caves.

Near the meditation caves stand the Kantaka Cetiya, a very old stupa.
It is about 425 feet in circumference and was constructed of red bricks with four protective gates in the four cardinal directions.

All stupas are hallow Inside and usually enshrine important relics which are buried inside with no access.
There are usually no gates nor entrances to the stupas.

Those four gates that I have seen everywhere in Sri Lanka, do not protect actual openings, they are just cardinal markings and each has stone decorations and an altar for worshippers to place flowers on.

The gates of this stupa were beautifully decorated with sculptures of elephants, dwarfs, lions, horses and other animals, humans, deities and floral motifs.

Our driver parked at the bottom of the mountain, and we walked up the many steps to visit all the places along the mountain, all the way to the summit.

At the summit’s courtyard, we had to leave our shoes at the gate and walk barefoot.
Climbing the granite rocks barefoot, was a bit of a challenge for those of us who are not used to walking barefoot on the hot sand and somewhat slippery granite rocks.

There is a large stone Buddha sitting on the top of the granite rock.

We climbed to visit two large stupas and we were surrounded with many monkeys.
The monkeys come to eat the flowers that the worshippers had bought and placed before the reclining Buddha that is enshrined in one of the stupas.

Along the mountain, there are ancient Slab Inscriptions, massive flat boulders of granite engraved with the records of names of donors and their gifts, painstakingly carved with chisels.

The meeting hall of the monks is where the monks used to meet to discuss the Dhamma and the Vinaya. Today, all that remains is an open space which is 62 feet (19 m) square, and the 48 stone pillars which once held the wooden roof.

In the center of the summit, there is a Dagaba, (a stupa) which is surrounded with stone pillars.
The pillars show that there once had been a house encircling the stupa.
The Dagaba itself is said to enshrine the relics of the great Arahat Mahinda.

There is also a steep rock at the summit with iron railings to help pilgrims to climb to the top.
In the ancient books it is written that Mahinda came to Sri Lanka by travelling through the air, and he landed on the top of a rock (called the Aradhana Gala) where he met King Devanampiya Tissa for the first time.

On our way down, we took a narrow path through the forest to visit the famous Naga pond at Mihintale.

The Naga, or serpent, is carved into the rocks of the stone pool, in the shape of a Cobra with five heads.

It is said that this Naga Pokuna pond was once a natural stone pool filled with rainwater.
In the years 575-608 AD, the natural pond was converted to a man made pond by King Aggabodhi.
Since then the Naga pond supplied water to the Lion pond, the Alms hall and for the daily needs of the Mihintala monks.

The Lion Pond is located in the lower mountain, and it has a statue of a lion standing on two legs.

On our way down we stopped and had some fresh lime juice made by a nice lady running a street stall made of corrugated iron and sticks of wood.
We sat in her plastic chairs and drank the fresh juice which she seasoned with a pinch of salt.
She kept asking us if we liked it.
We did like it.
Her friend came over and offered us free mini bananas that tasted delicious.

Later we visited another small cave in Mihintale, located nearby.

It didn’t really take the whole day to visit Mihintale.
Unfortunately, there are no great and relaxing hotels in Anuradhapura.

Because of the heat, it would have been less tiring and very lovely to go back to the hotel in the middle of the day, swim in the pool, have an afternoon tea with finger sandwiches and then continue sightseeing.

Our guesthouse did have a pool, but it was not the kind of pool that I could get into.
Behind the pool they still had ongoing construction work of more rooms, and it was a small pool with no comfortable seats.

They also had no good place to sit and drink tea.
Their garden was full of mosquitos and had only hard wooden chairs.

Jules and I gave them our laundry to do.
It came back a little less than completely clean, and it smelled a bit worse, because the water used for washing is not itself filtered clean.

Instead of feeling upset, we couldn’t stop laughing.
We remembered how, many years ago, when we travelled in rural India and rural China, we used to look for places to do our laundry.

On occasion, we found a laundry shop displaying a washing machine and drier.
We asked them to use a “good smelling soap powder” and only warm water, not hot, and to use the gentle cycle and only fluff the laundry in the drier.

They looked at us with smiling faces and fascinated looks and nodded in agreement.

Later when we walked by the shop again, we saw our precious laundry hanging on thorny tree branches and spread on bushes, amidst the roaming goats and swarming flies.

We have learned not to care if our travel clothes get ruined.
In China we even got our clothes back with holes in them.
They were scrubbed too hard on river rocks with hard soap.
But it was absolutely hilarious.

With many laughs and many smiles,
All my warmest regards,
Tali

← The Sacred City Of Anuradhapura, and the Rock Carvings in Thanthirimale, Sri Lanka
Avukana, The Largest Stone Standing Buddha in Sri Lanka →

5 Comments on “Mihintale, A Holy Buddhist Mountain In Sri Lanka”