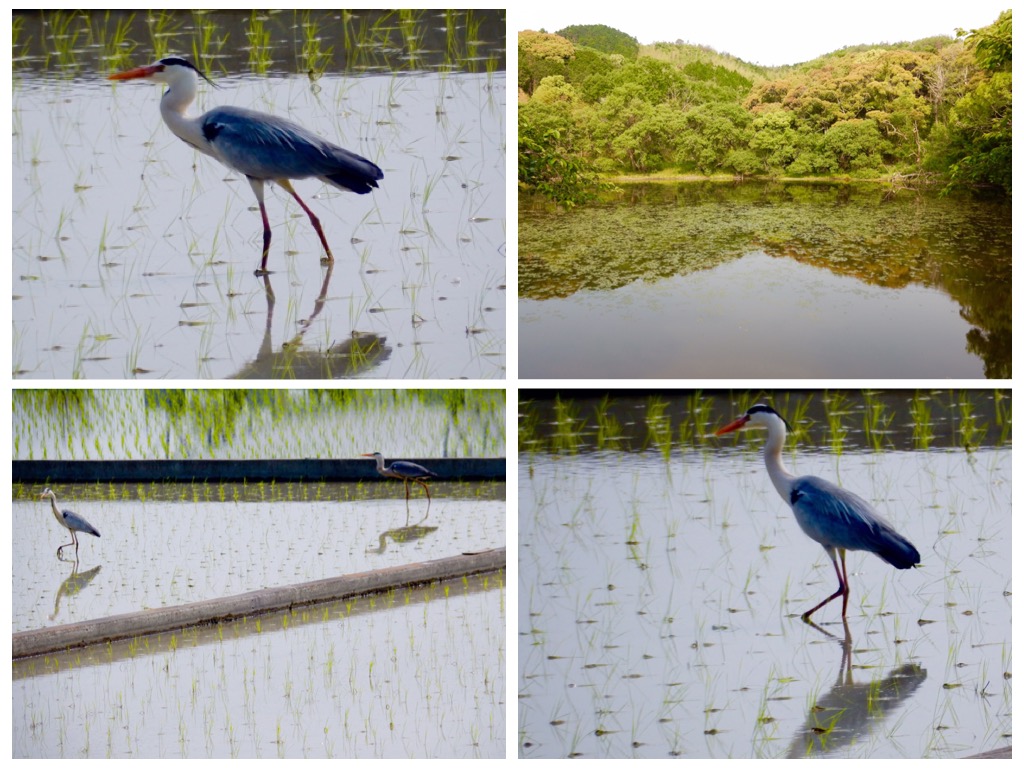 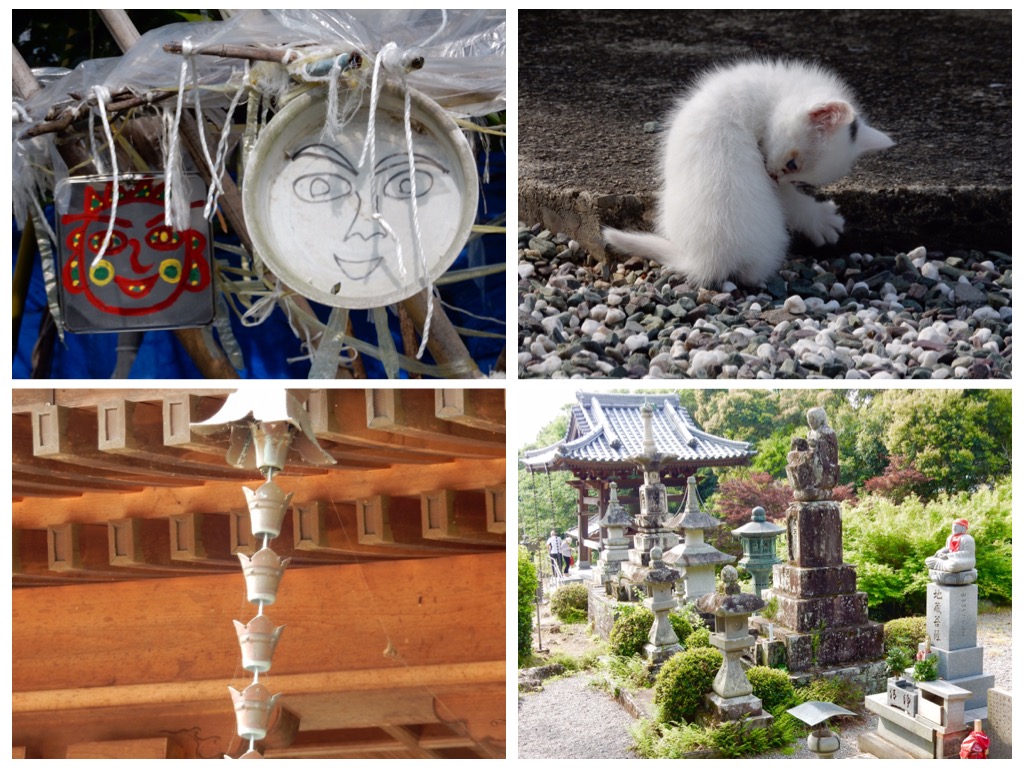 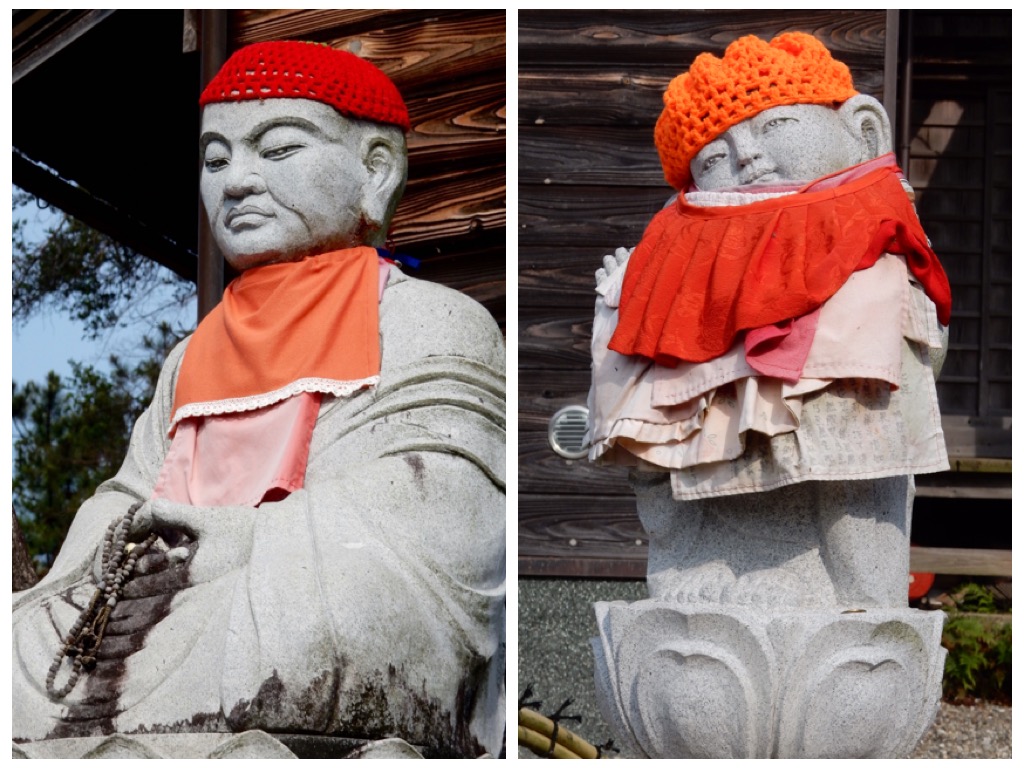 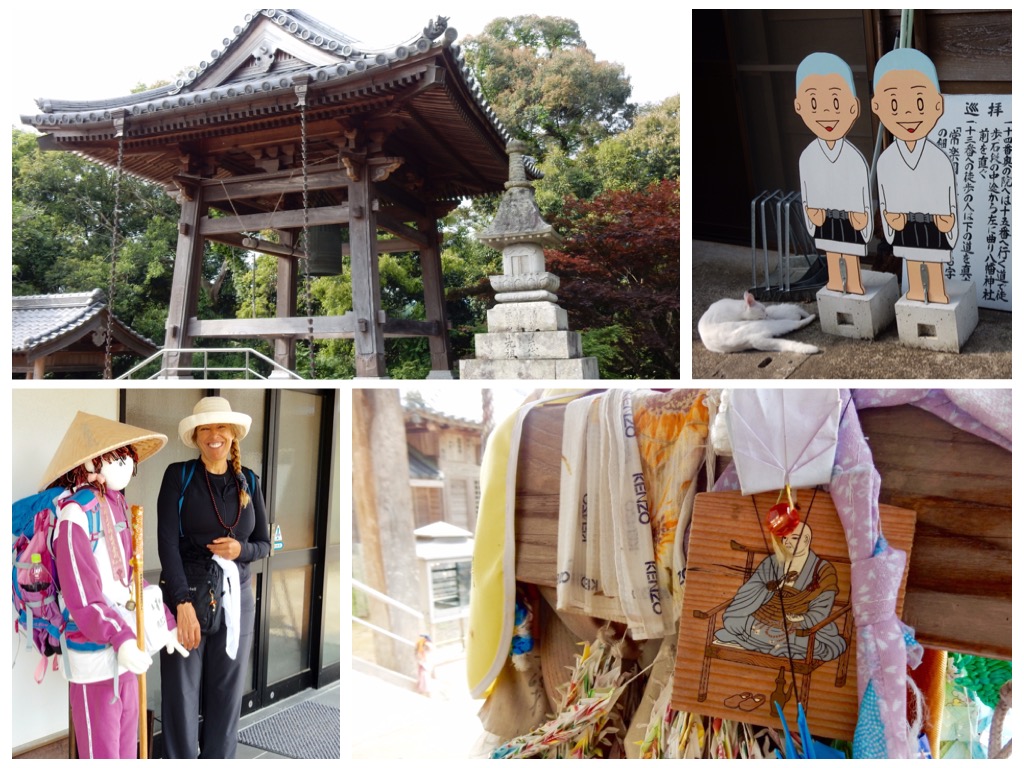 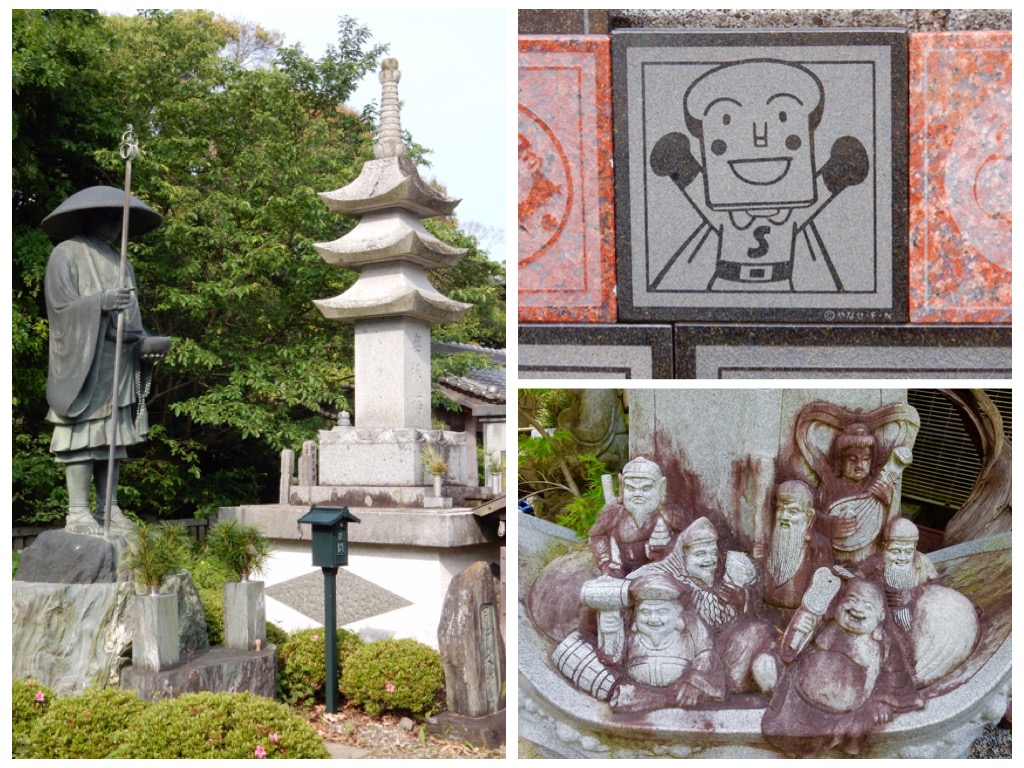 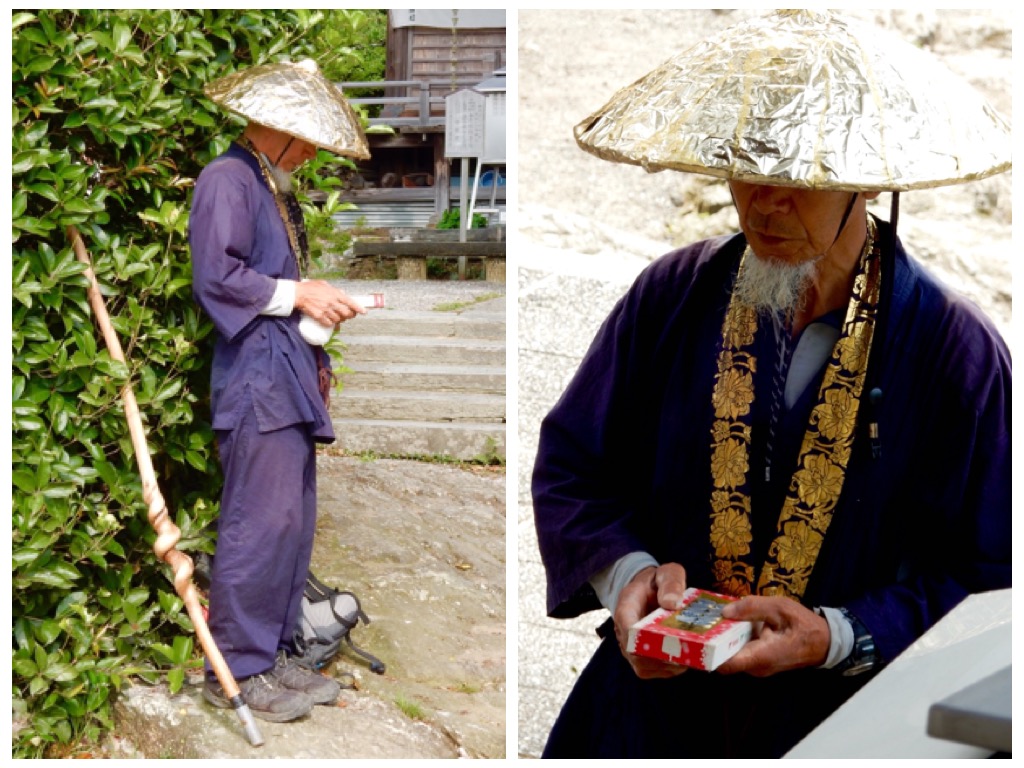 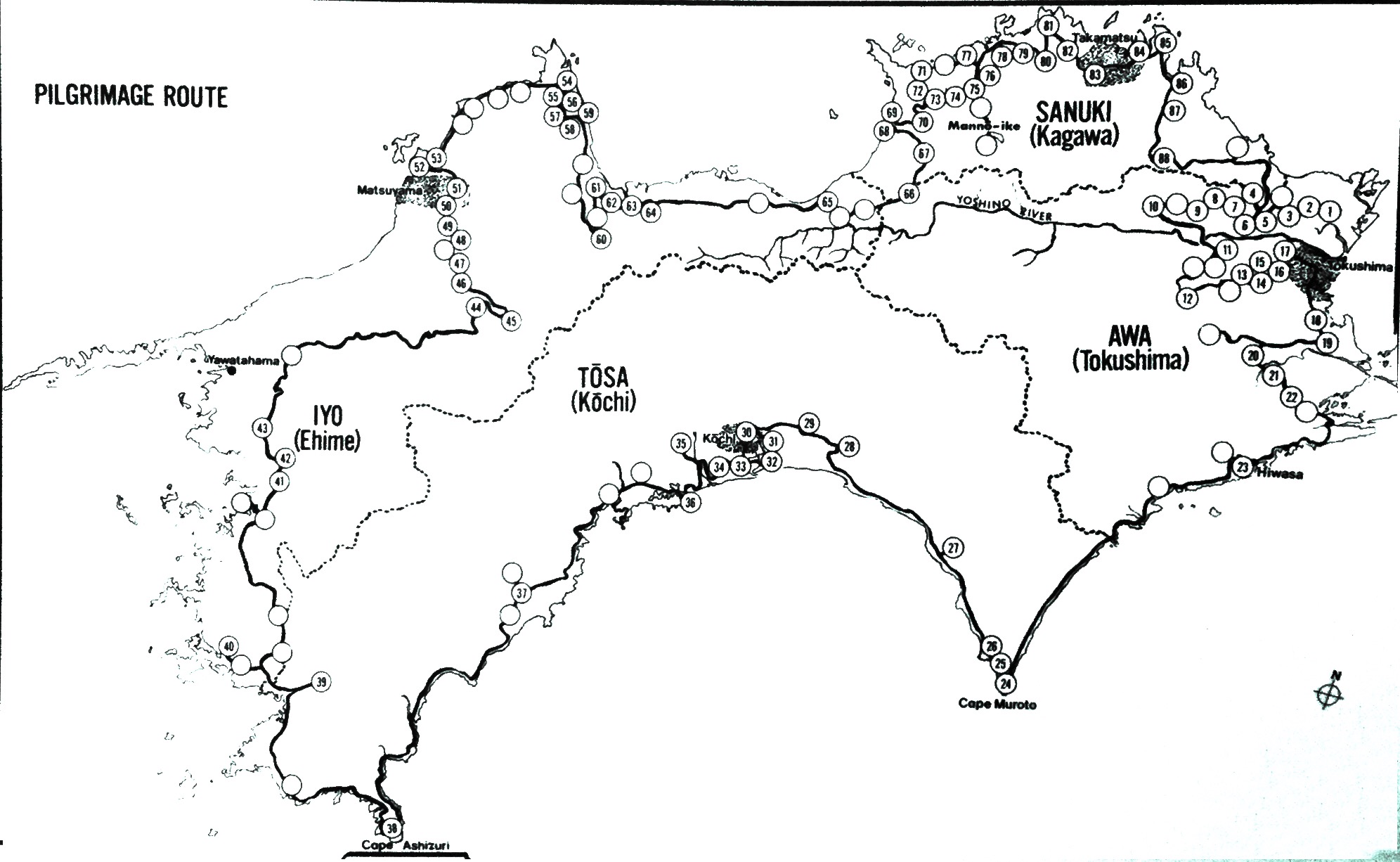 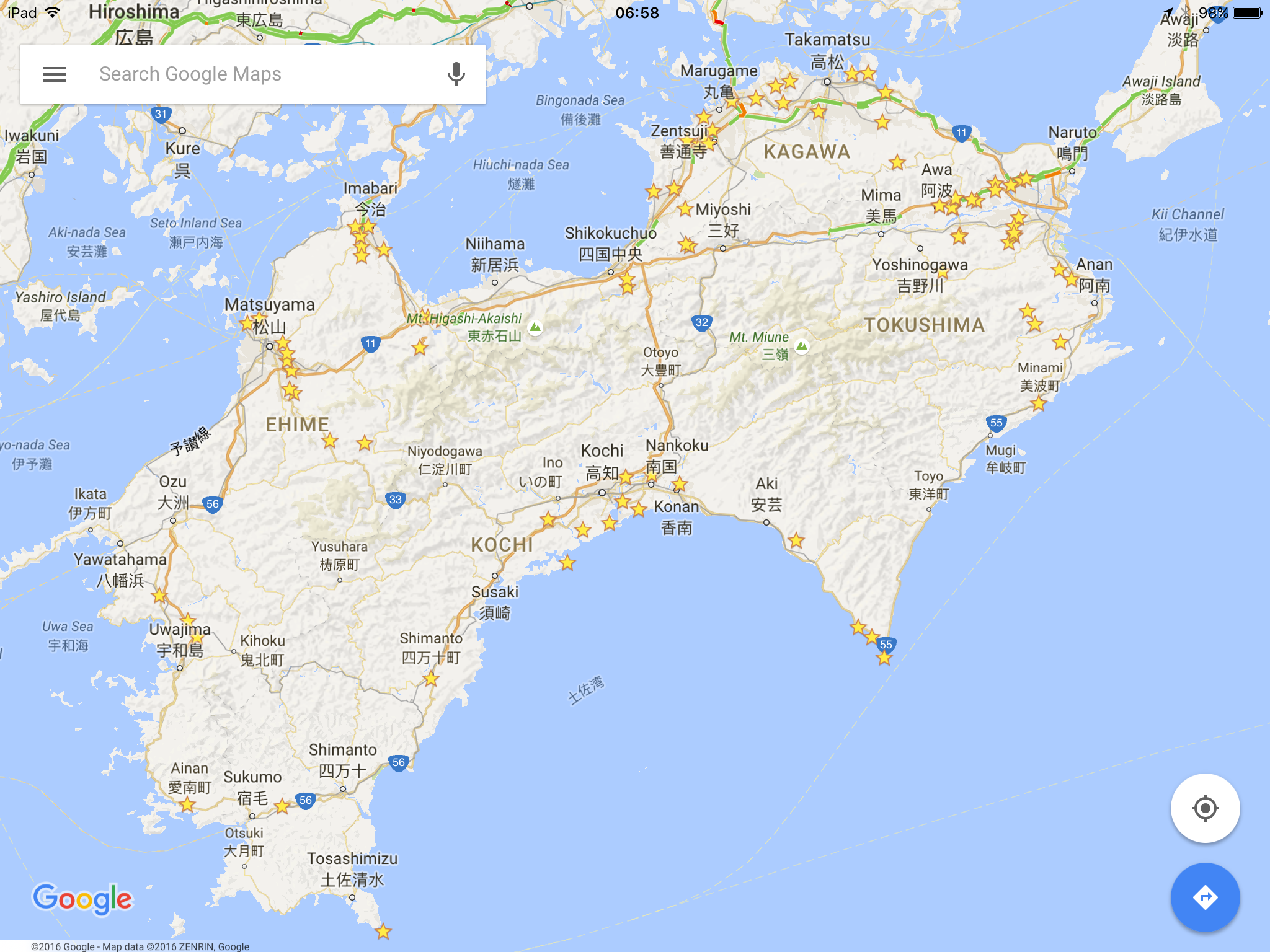 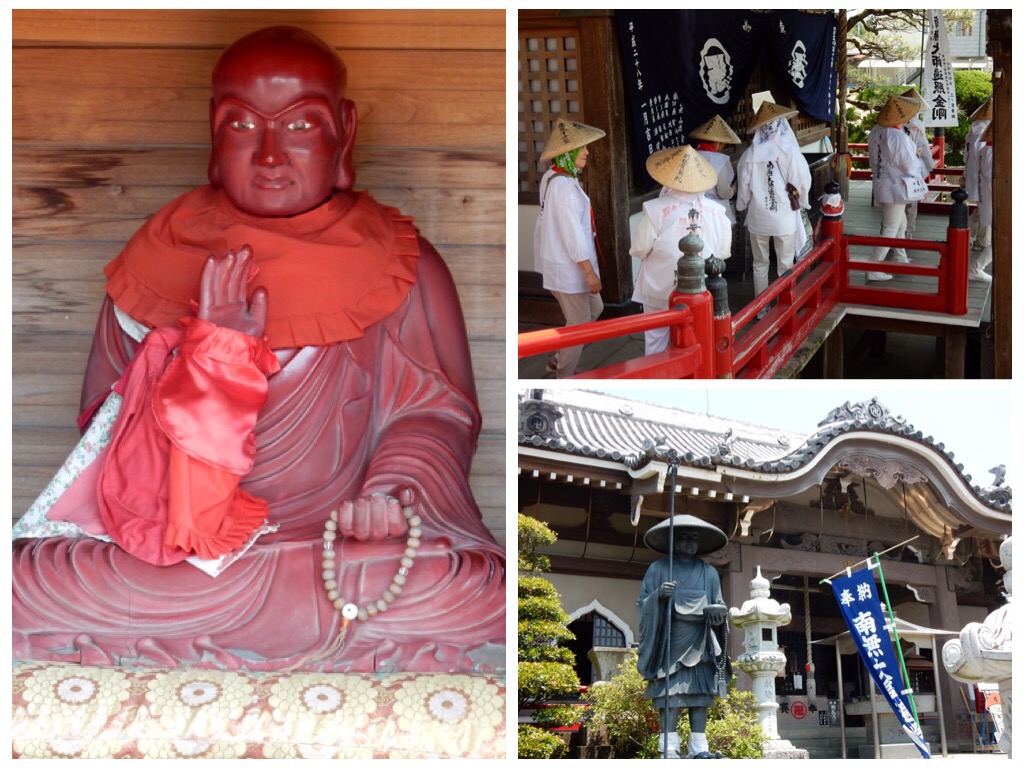 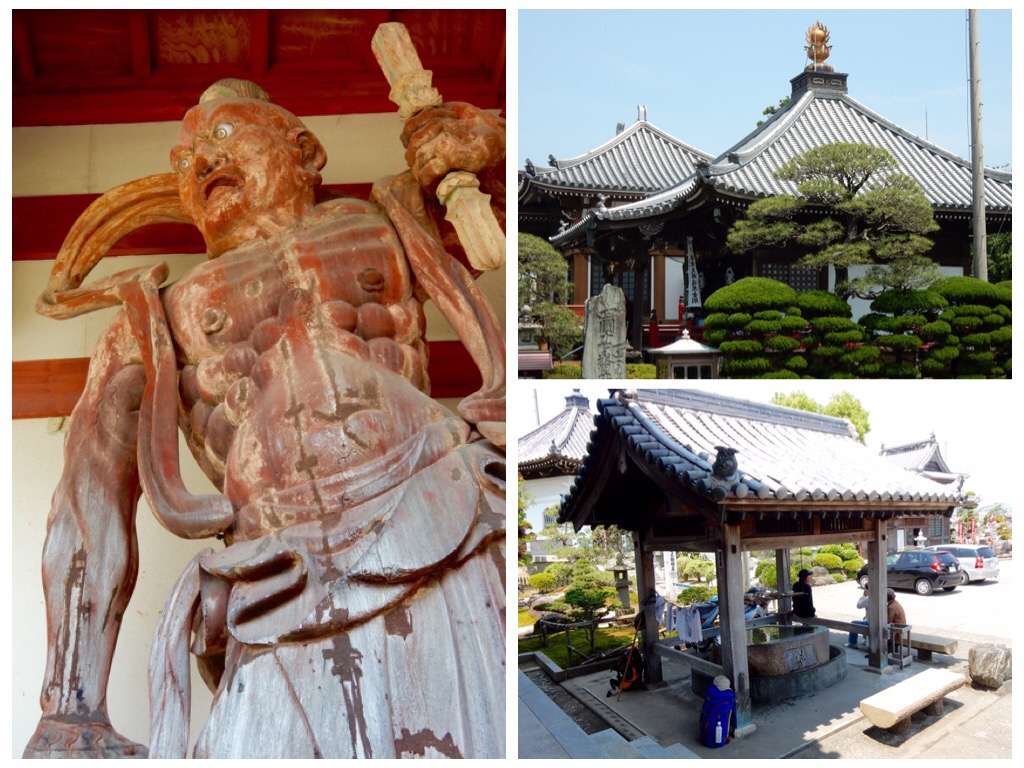 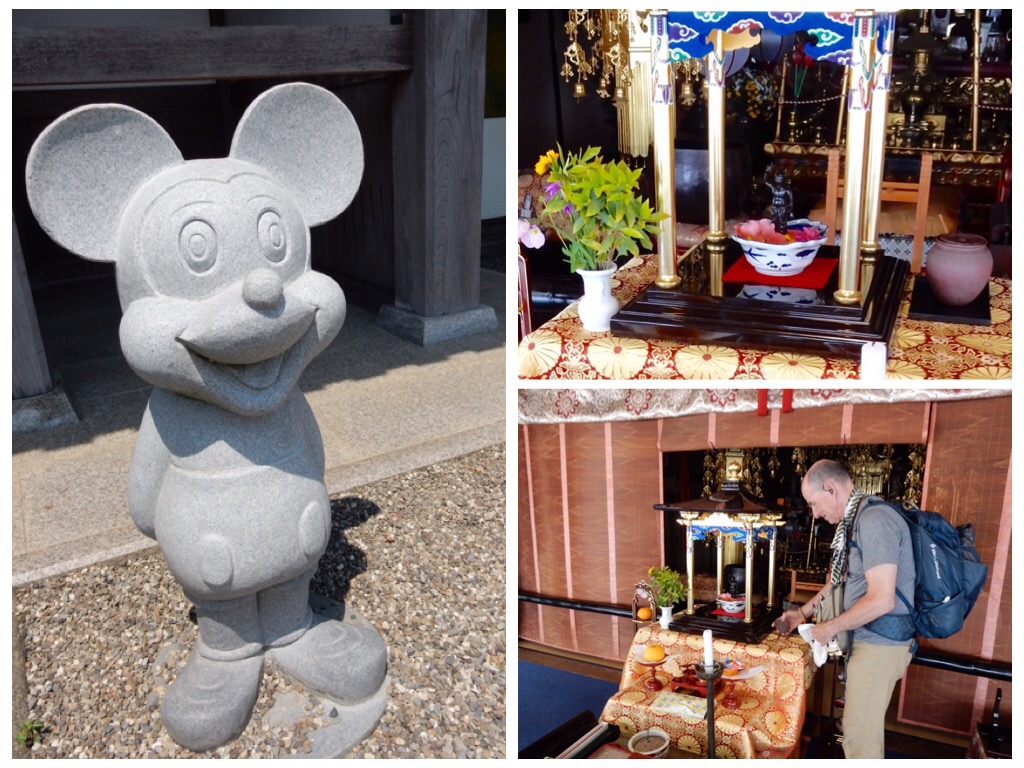 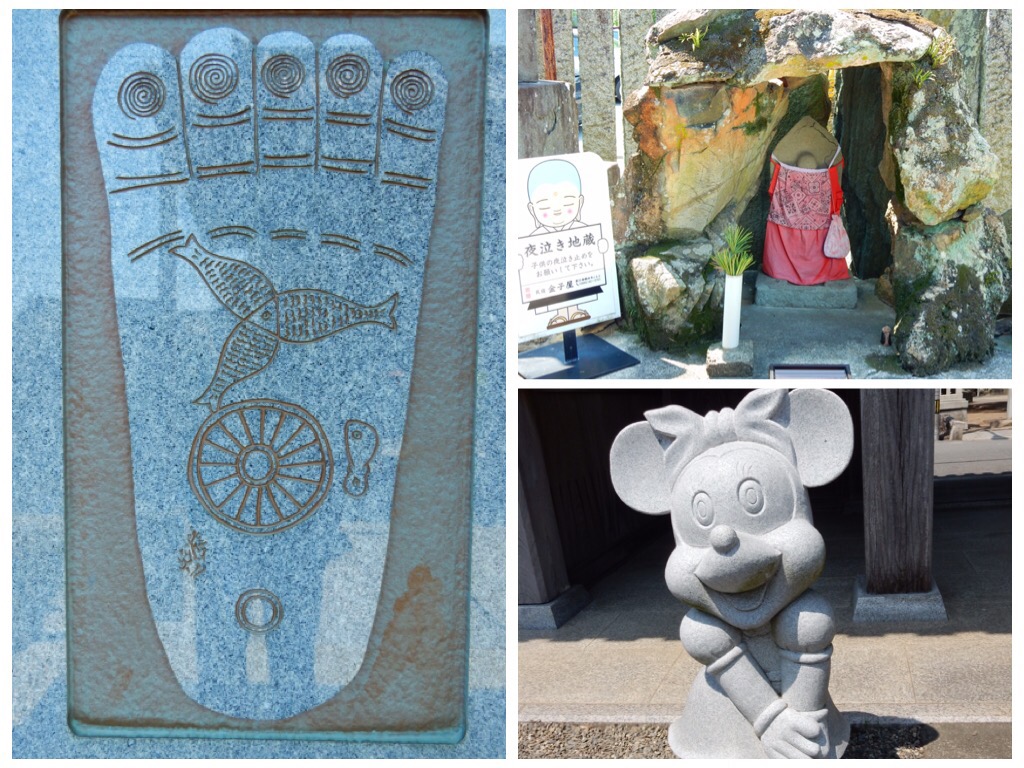 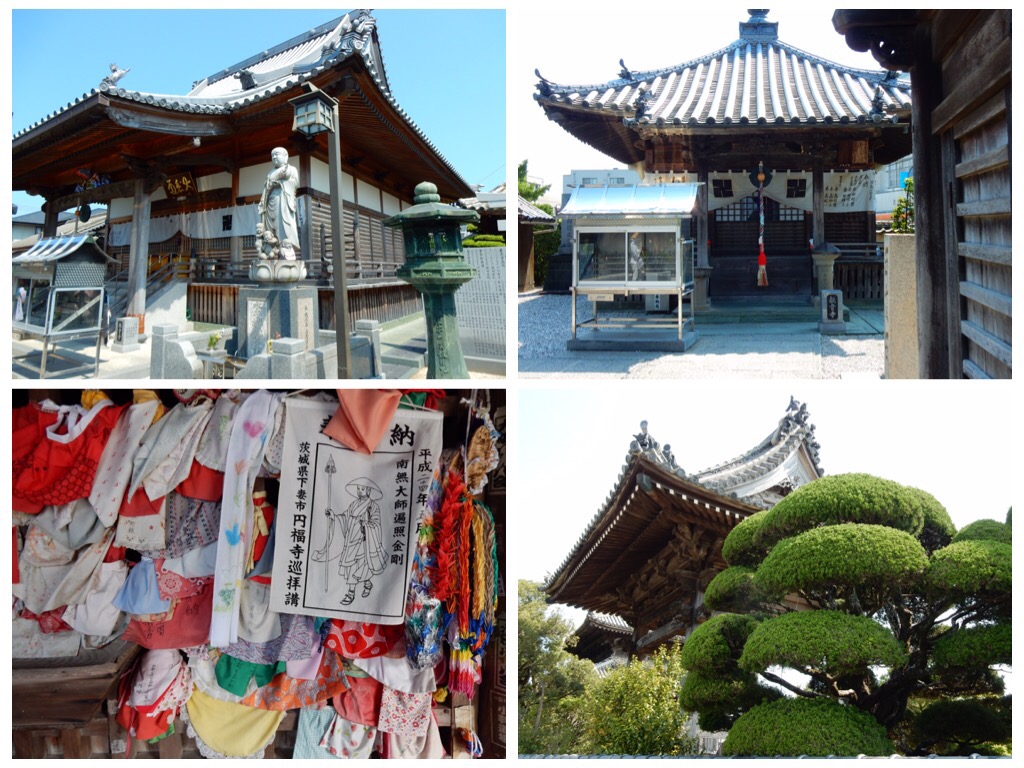 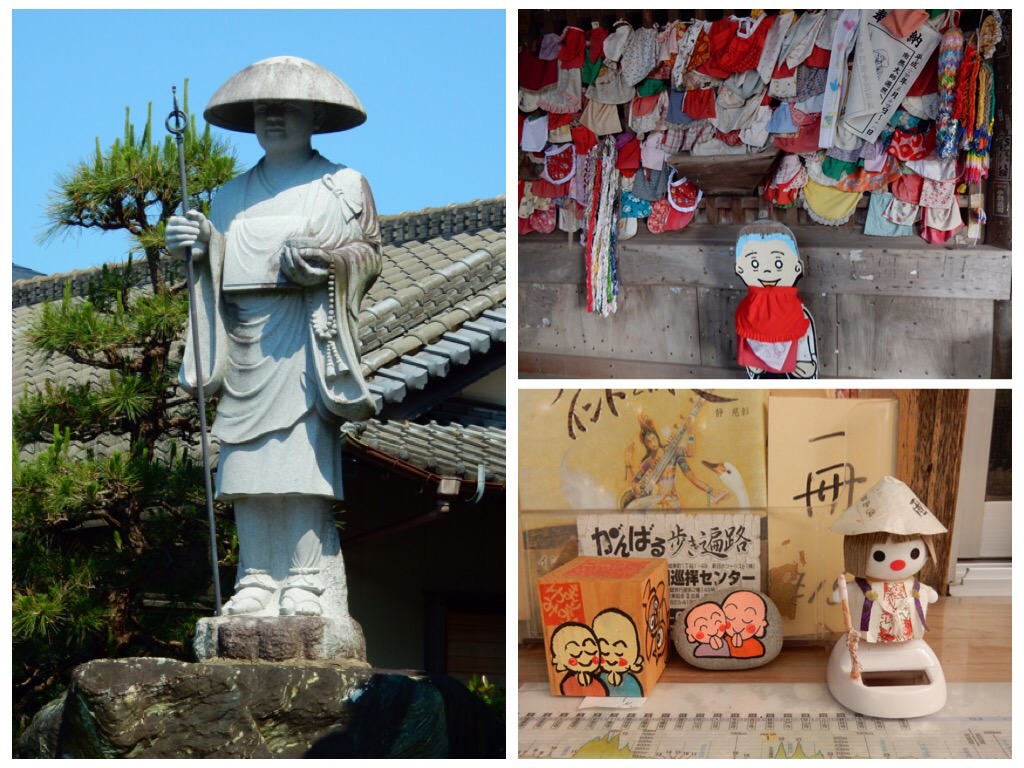 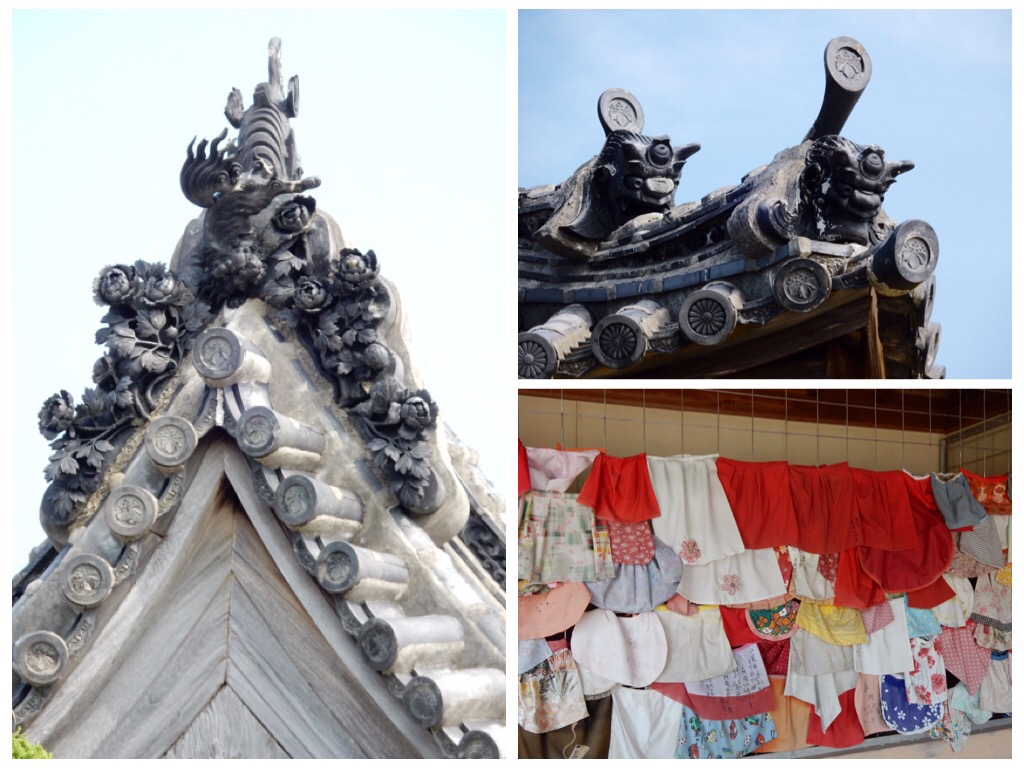 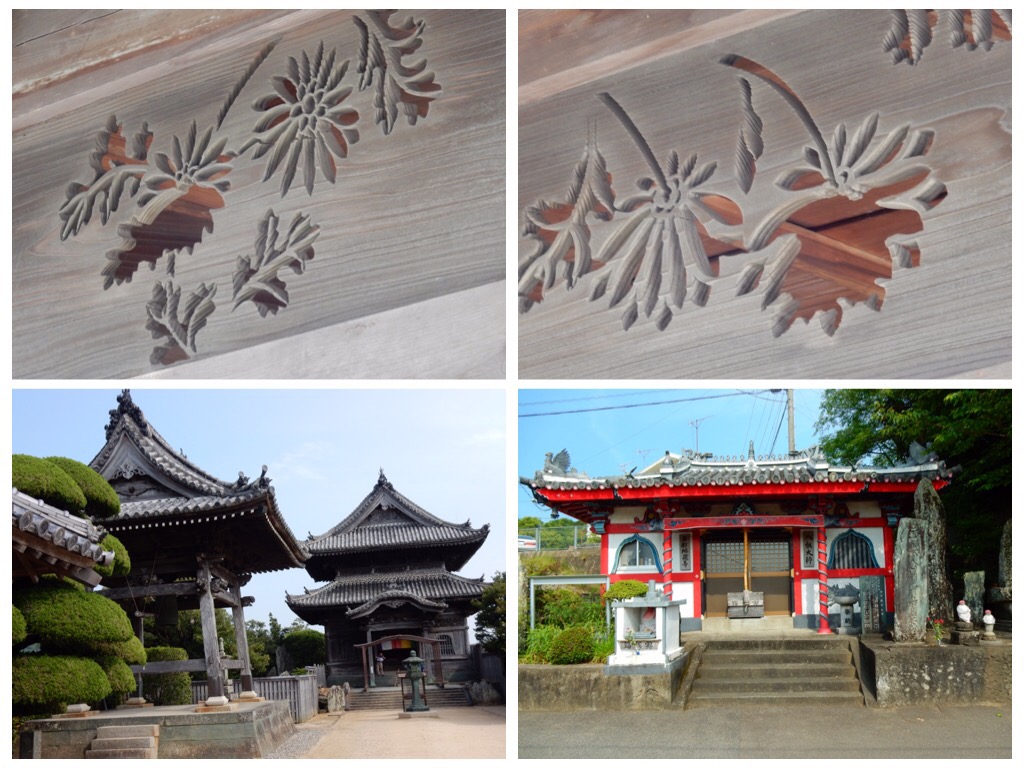 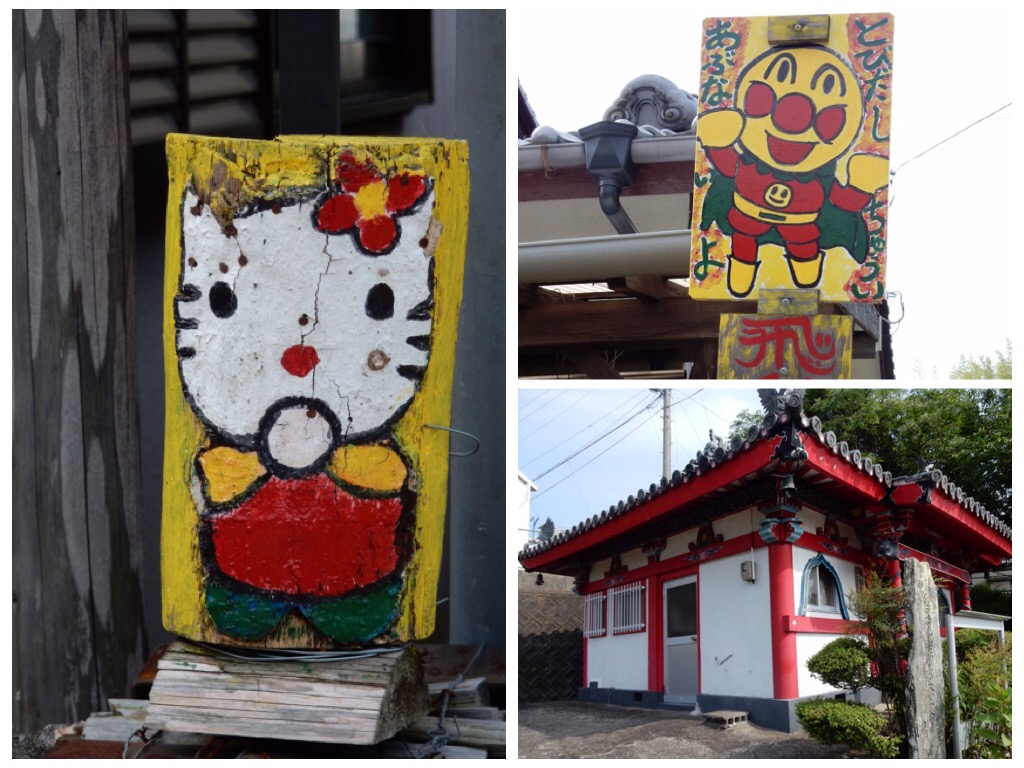 It feels surreal that we can be on a remote forest in Shikoku island Japan, and at the same time file our tax return in the US.

But this is exactly what we have done.
We received a PDF of our tax return from our accountant in Boulder Colorado, read it over and authorized her to file it online.

This morning we had breakfast in our guesthouse, “Kadoya,” with Paul from Portland that we had met yesterday on the mountain hike.
Paul had switched his accommodation to Kadoya, after feeling horrified at how dirty and dingy the guest house that he had booked in advance looked.

Paul does not speak any Japanese, so we gave him some useful words to say to other Henros that he might meet on the trail, like: “Kiotsukete,” which means “Walk carefully!,” or “Ganbatte!,” which means something like “Fight Harder” or “You can do it!”

Henros often greet one another with “Ohayo gozaimasu!” (good morning!), or
“Konnichiwa!” (Good day!), and then say an encouraging word as we depart.

Breakfast was a simple affair but fresh and tasty.
Pickles, steamed rice, miso soup, a slice of salty Salmon, a raw egg (which we did not eat) and narrow strips of spicy nori seaweed, which are eaten with the rice.

Today’s walk was all on flat narrow roads.
We visited 4 old temples, some dating back to the year 741 AD.
An easy day with lots of sun, very warm.
We saw lots of bus and weekend pilgrims, perhaps because it was a Saturday AND also Buddha’s birthday.

Kobo Daishi (Kukai) taught that enlightenment is attainable in this lifetime, and present-day Shingon Buddhism, the predominant sect on Shikoku, maintains this teaching today.

We do not need to struggle through countless lifetimes in order to attain Self Realization and enlightenment.
After all, all you need to do is to REMOVE THE BLOCKS that stand between you and your awareness of the Light that is already within and all around you.

We all have the seed of “Buddha Nature” inside us.
Our minds are beautiful and unlimited and much like a lotus seed, they will grow with great compassion and bloom if you let them, if you just provide a bit of moisture and some loving care.

If you don’t let your mind bloom, the seed will still be there, waiting for the right time to germinate and grow in your consciousness.

There are four prefectures (counties) in Shikoku island, each symbolizing one of the “Dojos” or stages on the path to Self Realization, Enlightenment and Nirvana.

Stage one is called “The Awakening”- in which one becomes fully aware that he/she is not a mortal rigid body moving in a structured space and time, but that we are spirit, luminous beings, pure energy, one with all of infinity.

This realization is hopefully sensed by walking the temples of Tokushima (Awa) Prefecture, between Temples 1-23.

Stage two is called “The Discipline-” in which one must develop and strengthen his/her energetic subtle body.

Usually this is achieved by practicing asceticism and discipline.
One must learn to be in control of his/her cravings, feelings and self indulgences.
One must learn to control his/her thoughts and to calm the mind, learn to focus the mind so it can become a good servant, instead of being unruly and wild.

The discipline and asceticism stage is practiced in Kochi (Tosa) prefecture, between Temples 24-39.

In Kochi prefecture, there are long stretches of the path with no services, no villages, no food and no water, except what a pilgrim can carry with him/her.
We will be entering Kochi prefecture this coming week, so we will be practicing the self-discipline and asceticism required by this part of our pilgrimage.

Yet discipline does not have to be hard.
Yes, Jules and I have learned to fast, drinking only a few fruit juices a day for weeks at a time.
We have learned to sit crossed legged in meditation for long stretches of time, and to ignore all discomforts in our minds and bodies.

Discipline can be lots of fun once you master the lower cravings.
There is a term that I like to use, it is called “Blissipline”- and it means “Bliss Discipline.”
It means that you are not actually depriving yourself, only overcoming your body’s lower cravings so you can experience true bliss.

Stage three is the stage of “Enlightenment.”
When the body is no longer constantly held in the mind, one can experience immense realizations of one’s True Godly Nature as a Child of God and Co-Creator of his/her own Universe.

This is hopefully achieved in Ehime (Iyo) Prefecture, between Temples 40- 65.

Stage four symbolizes the Dojo (stage) of entering Nirvana, in which one is able to enter the state of Samadhi during meditation and dissolve her ego completely into the infinite.
This dissolution of the singular identity into immortality, occurs after a few stages of enlightenment and realization.
Hopefully this will occur in Kagawa (Sanuki) Prefecture, between Temples 66-88.

Now…. What if all this does not occur in a pilgrim’s reality?

Many, many pilgrims do this pilgrimage many times, walking for many years around the island with the hope of discovering the Buddha Nature within.

An “Osama-fuda” is a slip of paper on which an image of Kobo Daishi is printed, along with a saying that one must have “Dedication to the goal!”
A pilgrim writes his name and his ultimate goal for the pilgrimage on the Osama-fuda.

Osama-fudas are deposited in special boxes at each temple, and also given to anyone who offers a kindness to a pilgrim, so hundreds of these slips are used by each traveling pilgrim.

The Osama-Fuda are color coded, depending on the number of times that one has done the Shikoku pilgrimage.

White Osama-Fudas are for pilgrims who have completed the pilgrimage 1-5 times
After 5-7 pilgrimages, the paper is green.
After 8-24 – the paper is red.
After 25-49 it is bronze.
After 50-99 it is gold
After 100 times around, one uses a nameslip that is made from woven fabric (called Nishiki.)

The colored nameslips are a source of pride for many pilgrims.
Even if one has not achieved the ultimate goal of enlightenment and Nirvana, doing such a demanding pilgrimage is bound to advance a person (assuming one walks the whole pilgrimage and does not drive it.)

The gold, bronze or Nishiki name slips are viewed as a protective amulet, and able to bring good fortune if received from a veteran pilgrim that you have met.

Today I met a pilgrim who had gold Osama-Fuda name slips.
He had a sweet and humble demeanor, as befitting a man who has gone through many hardships and learnt not to resist what comes.
The hard sun, the snow, the rain, the long walks, the mountain climbs, the muddy downhills….. His eyes were kind as I handed him some rice balls and a thousand yen bill.

Some of these gold and Nishiki color pilgrims have no home to return to, and they roam the path continuously.
They move slowly, raising donations from other pilgrims or visitors to the temples who help them to fund their endless pilgrimage.

So how do I know that he was not just a homeless beggar, but a holy man on the pilgrimage path?….
I could tell by his demeanor and his eyes.
Beggars have a rough hunger in their eyes, while this man had a warm glow in his core that one does not acquire by running after material goals and struggling in the world of dreams….

Along the way we were invited into a Shinto shrine by a friendly man.
Inside the shrine, we met a woman who invited us to take off our shoes and come inside.

Shinto is the ancient animism tradition that originated in Japan.
It is believed that everything has a soul, be it an animate or inanimate.
There is a spirit and soul in each lake, each flower, the rain, the moon, each tree, etc.

Today was not only Buddha’s birthday, it is also the birthday of a flower and rain Shinto goddess, and her shrine was filled with flowers, sweets and food offerings.

Jules and I were invited to scoop water with a small bamboo ladle and pour it over her head like a fresh rainfall.
After the mini ceremony we were offered a refreshing cup of Sakura tea which tasted lovely.

Jules shared with me an experience he had a day before while we hiked:
“The orange trees are in bloom, and their fragrance is intoxicating, arriving to the senses before the white flowers can be seen.
With the bright sun and their powerful scent, I become a bit dizzy walking the pilgrim’s path through a meadow.
In an instant, the trees become suffused with a golden light that softens their details. As I slowly continue walking, the edges of the trees become less defined, then begin to slowly melt, like honey.
In just a few moments, the sensation has left, but the feelings of this world’s hard edges not being real, remain….”

Tomorrow we leave Tokushima city and walk south.
Still in the Awakening dojo (stage) of our pilgrimage…..

14. Jōrakuji (常楽寺) –Temple of Everlasting Peace
Beautiful rocky floor at the temple.
Founded in the year 815 by Kukai, with a presiding main deity named
Miroku Bosatsu.
It is believed that diabetics can pray here for healing.
I prayed for my Mom’s health and healing.

There is a story/ Legend being told that a woman had a paralyzed husband.
She did the whole Shijoku pilgrimage five times, carrying her husband on her back, seeking healing for his paralysis.

After five rounds with no improvement, they swore that the sixth time will be their last.
If he were not healed on the sixth pilgrimage, they will commit suicide together.
In this temple, he was fully healed and they walked together for the rest of the pilgrimage.

15. Kokubunji (国分寺) –State-Sponsored Temple of Tokushima Prefecture- the temple now belongs to the Zen Soto sect, and has the foundation stones of a pagoda that dates back more than a thousand years.

16. Kannonji (観音寺) –Temple of Kannon
Founded in the year 741
The temple has a stone Jizo sculpture that cries at night and people come to pray here for good health to their children.