Bronze Age Deer Stones, Morun City, Why Mongolian People Love Fox Fur Hats, And Why It Is Customary To Cut Off And Sleep On The Tail Of A Beloved Dead Dog 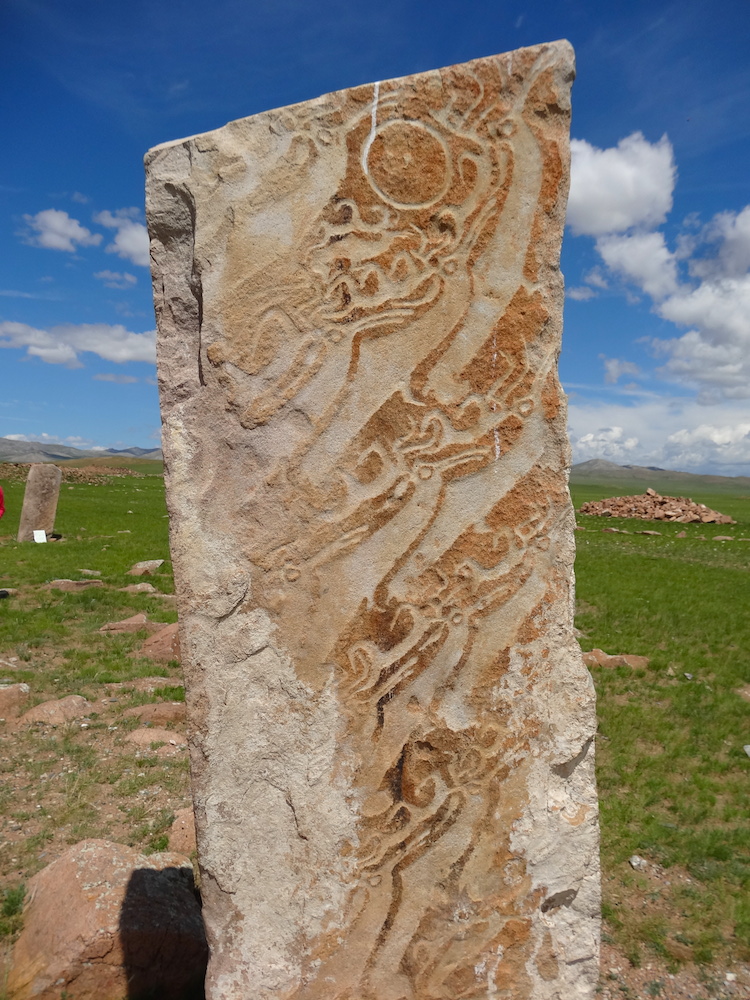 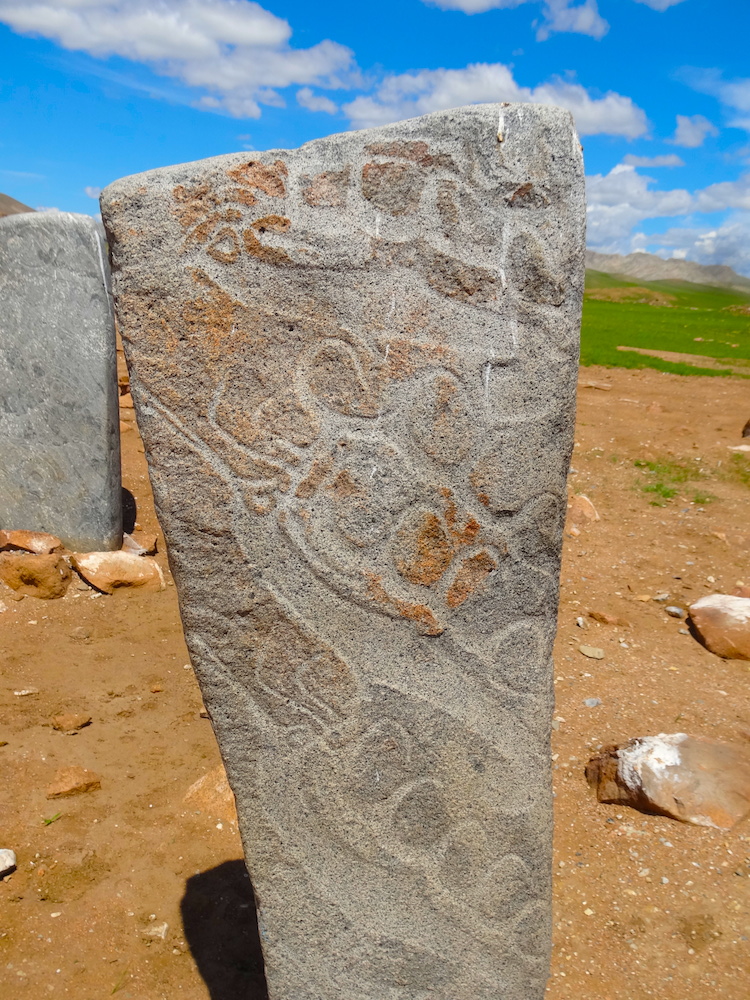 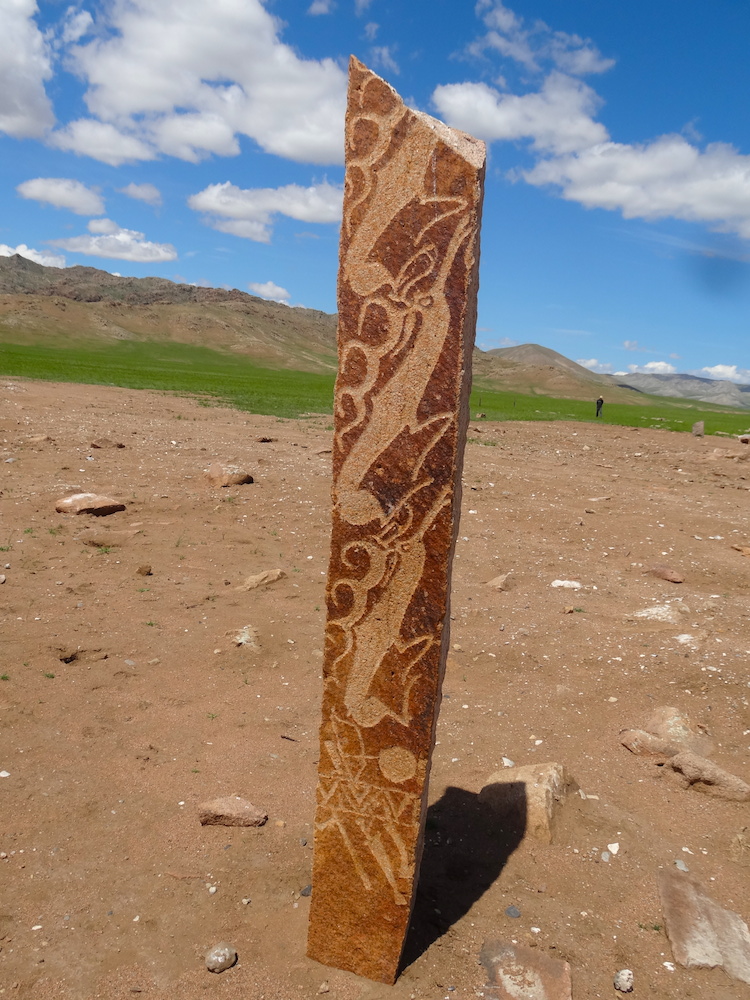 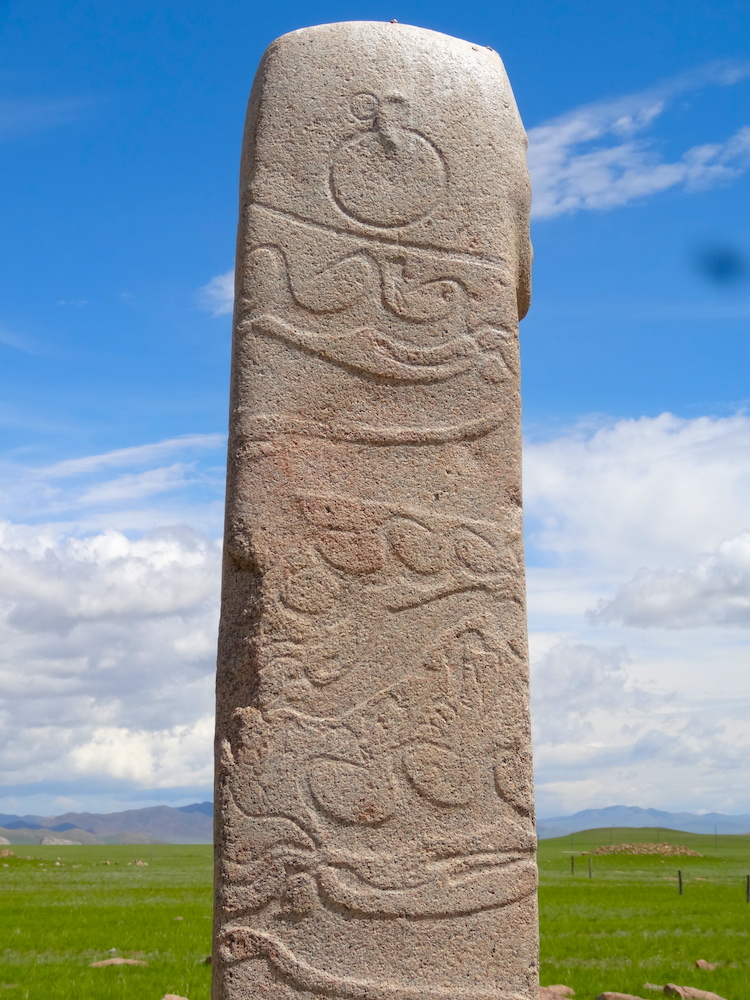 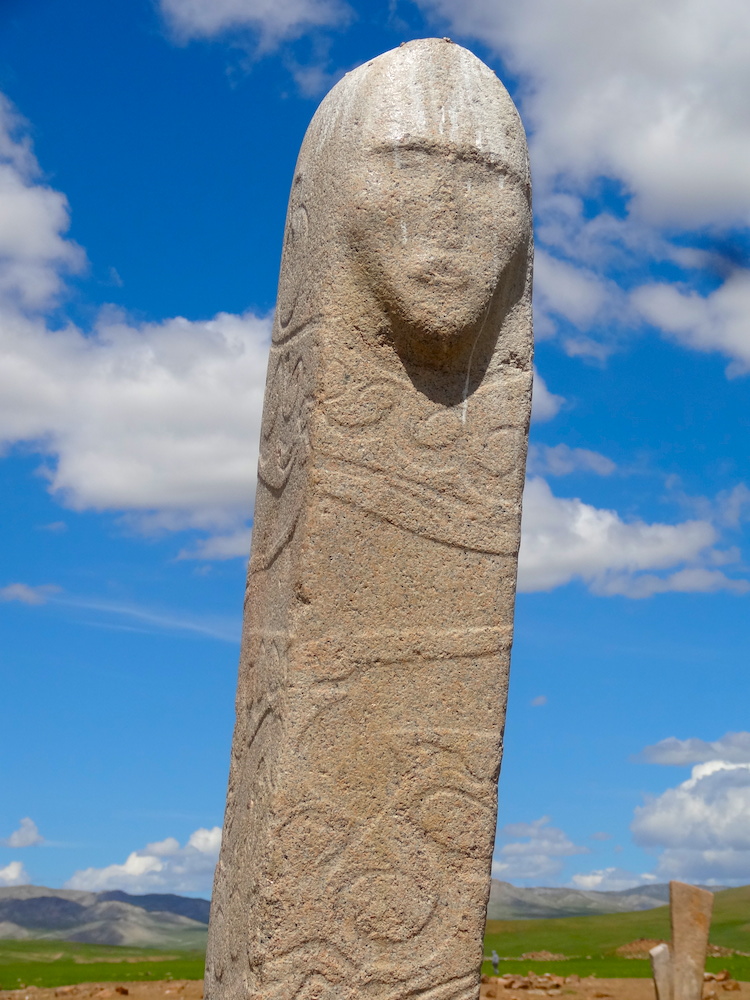 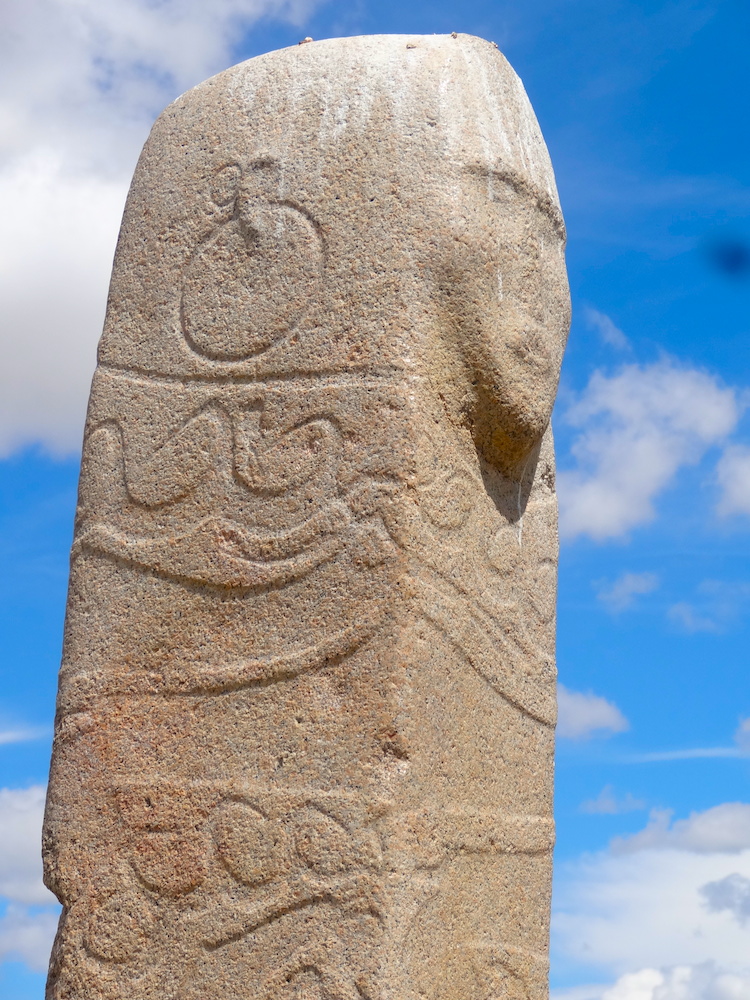 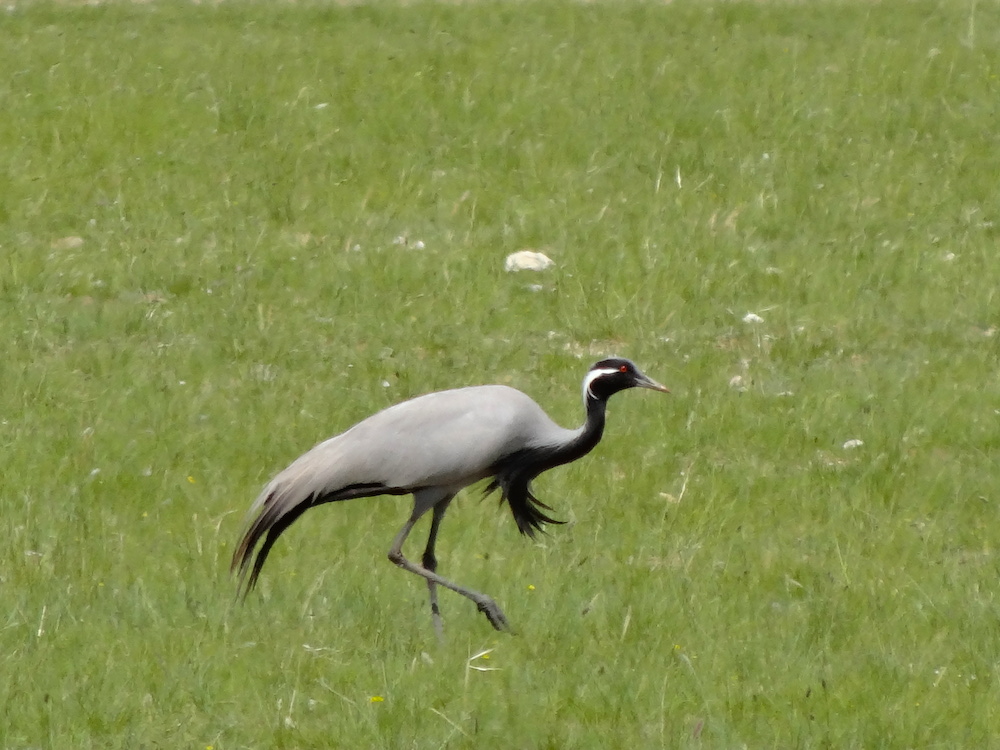 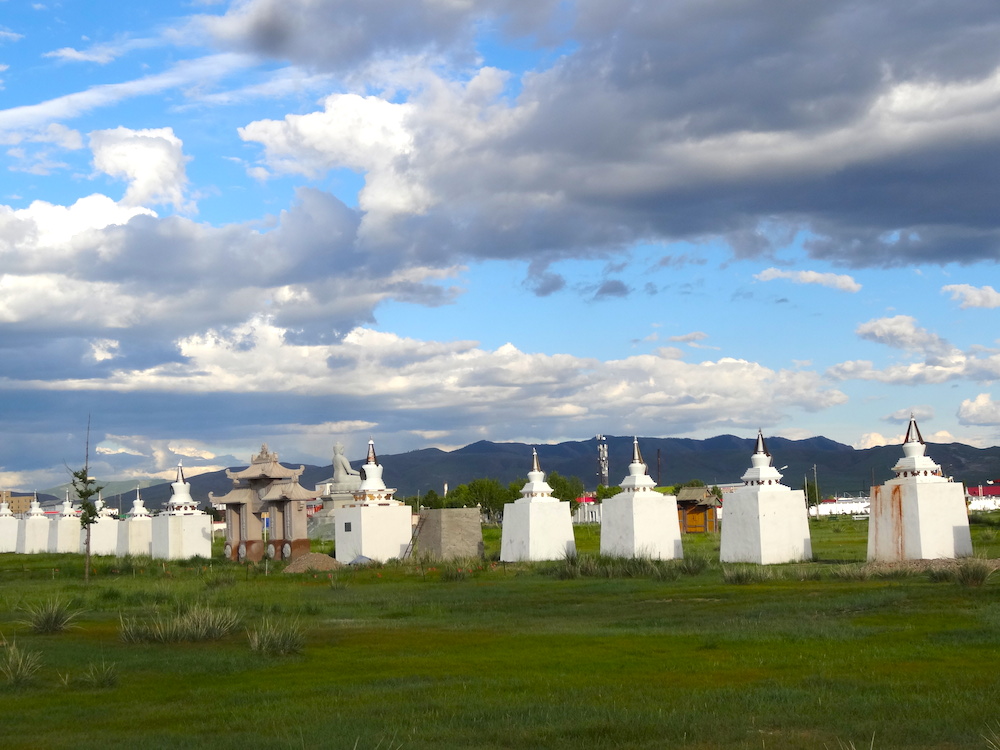 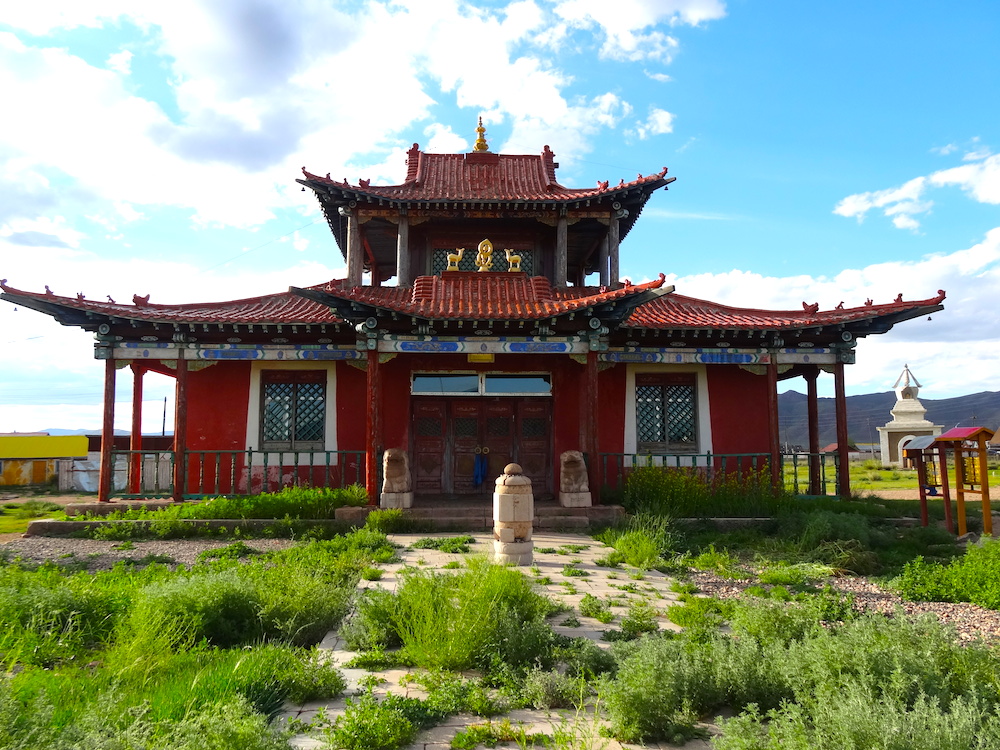 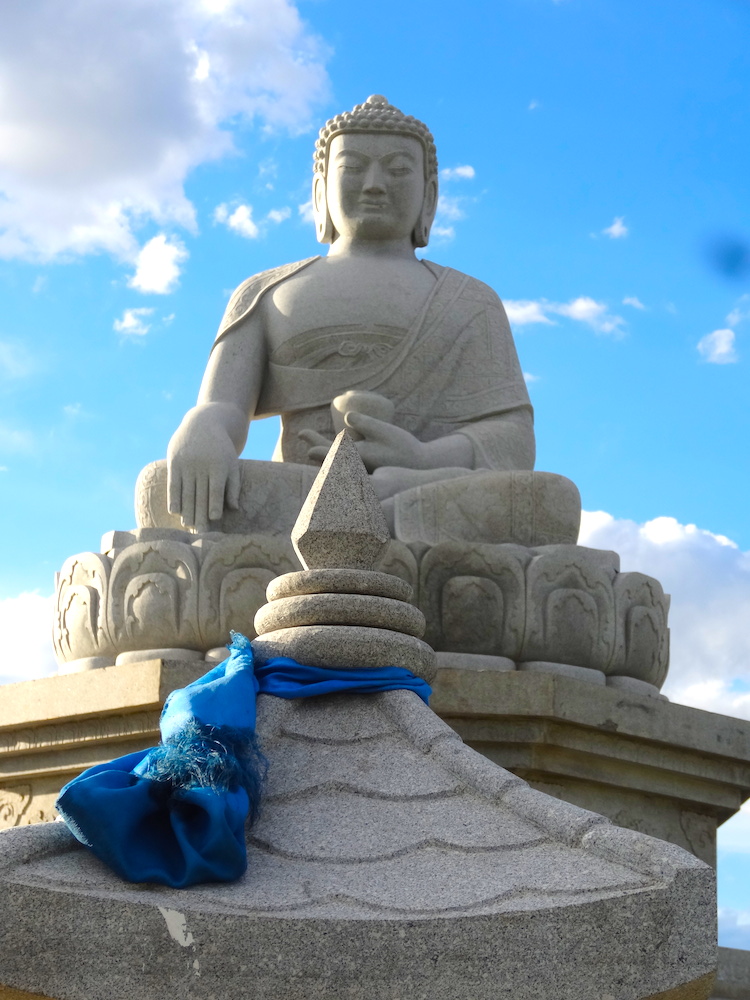 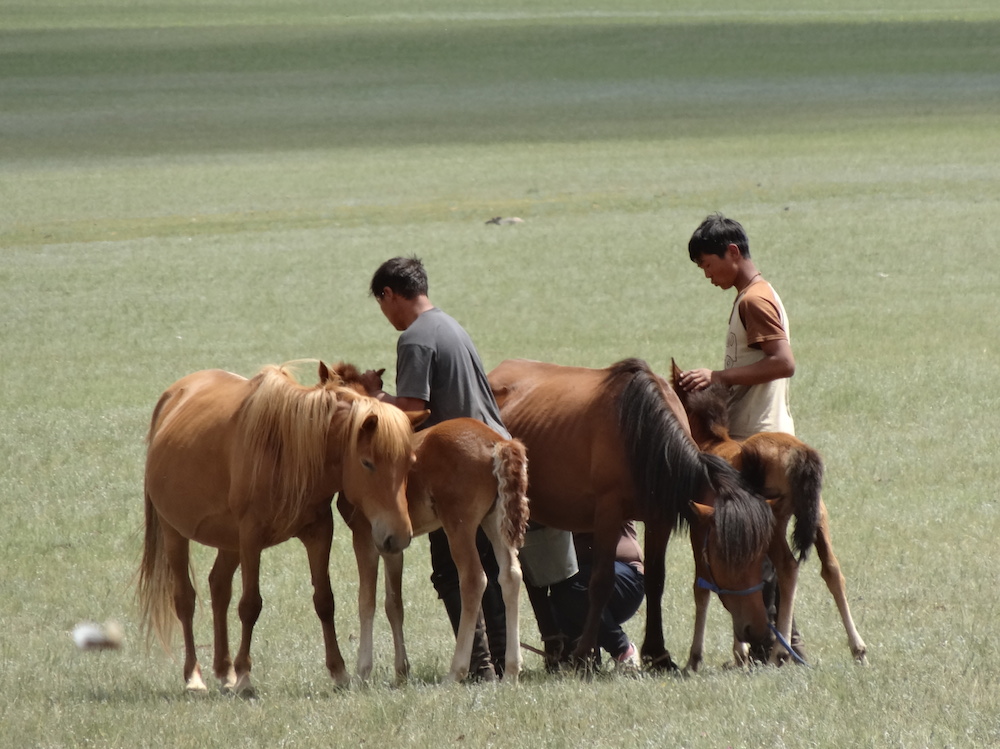 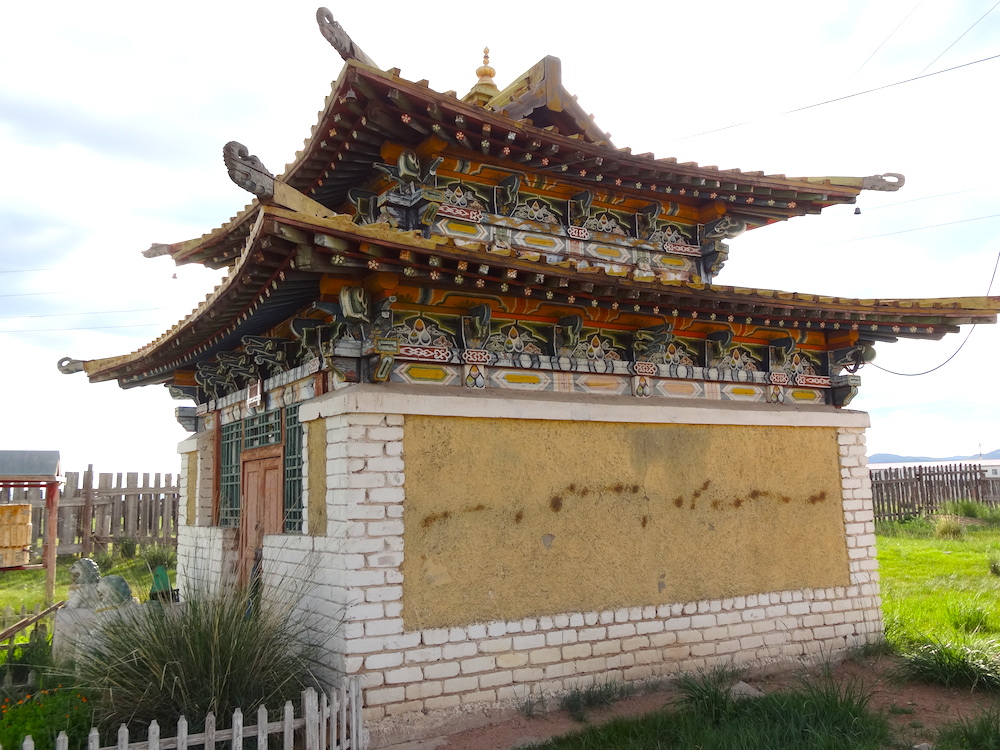 From Huvsgol Lake, we drove south towards the city of Morun (also spelled Mörön).
We first stopped again at the port village of Hatgal to buy some lunch as we planned to find a nice picnic spot and eat our lunch along the road.

We were very excited to go to see the ancient Deer Stones located about an hour northwest of the city of Morun.

Very few ancient monuments exist today dating back to the Bronze Age that are as well preserved as these Deer Stones.
Maybe the dry climate has helped to preserve the Stones, or possibly their remote location has protected them from archeological bandits, but I was surprised to find so many beautiful and tall Deer Stones just standing, untended, in a vast open field.

Deer stones (also known as Reindeer Stones) are ancient megaliths carved with symbols.
They can be found all over the world, but are concentrated largely in Siberia and Mongolia.

They are constructed from granite or greenstone, which are both abundant in the area.
Some were just a few feet tall, and some reached a height of 15 feet.
The stones are rectangular or rounded in shape, and are carved on all sides with symbols of reindeers, a sun and a moon, a belt of tools, and some were even carved with a face with earrings, looking towards the east.

The exact origin and purpose of the deer stones is unknown.
Those standing here in Mongolia are thought to have been constructed during the Bronze Age, around 2000- 1000 BC, and may have marked the graves of important people.

Most deer stones stand at the edge of ancient grave sites, and since the stones’ symbols are rooted in Shamanism, it is believed that the stones are the guardians of the dead.

There are about 700 deer stones around Mongolia of the total of 900 such stones that archeologists have found in Central Asia and South Siberia.

Back in Mörön, we noticed that there was a Buddhist monastery at the edge of town, and we decided to visit it after we had checked into our hotel.

The receptionist at our hotel looked like a woman who is not easily moved or bothered.
She has learned to deal with waves of demanding tourists with equanimity and indifference.
With only a hint of apology in her eyes, she notified us that there was no electricity in the whole city and no water, since there was municipal work being done on the main power and water lines.
We were promised that after dinner the power and water might be restored,… maybe yes, maybe no….

We decided to go for a walk around town, and visit the Buddhist monastery we had seen on the outskirts of town.

It was a beautiful old monastery, but most of it was undergoing reconstruction.
It was dedicated as the “Temple Of The Protectors Of The Dharma” (protectors of the Truth and the Way.)

A large statue of the Buddha had been donated by a local elected official.

Corruption and misappropriation of funds is very common in Mongolian politics.
Large sums of money simply disappear when entrusted to the hands of local politicians, instead of being directly used by the government for public needs like improving the living conditions of the constituents.

Often when local politicians get elected, instead of spending money on improving roads, schools, the sewer systems, fixing the sidewalks, etc, they spend the money to erect impressive monuments to the Buddha.
I guess the prevailing idea is that one must get “right with God” first, and then later, if any money is left over, help the people who had trusted and elected them.

On the grounds outside of this modest little temple, the Buddha had been erected at a high cost, sitting on a marble podium while the streets of Morun city were in dire need of decent concrete walkways.

We walked down the Main Street and chose to eat at a local Korean restaurant run entirely by Mongolians.
The place seemed very popular with the locals, and they made us a dish of wild rice with vegetables, which was very good.

It seemed like the place doubled as a combination late night Latin night club and Karaoke bar.
The owner of the place, a heavy set Mongolian man, walked around the tables with a proprietary look, a money belt full of cash tied to his waist, and a pencil behind his ear, which he used when asked to add up the bill.

Over dinner, Tuya told us another Mongolian folktale, about why Mongolian people love fox hats.

“Once, way before the opulent times of the wealthiest Mongol rulers, at a time when even dirt roads did not exist, a traveling Buddhist Lama came upon the ger of a couple who had been married for many years, but had not been able to conceive a baby.

The couple were very friendly, and they invited the Lama to stay over in their ger and offered him tea and food.

Their conversation was about the sadness of the couple, over not having had any children.
The lama listened carefully, and before his departure, he handed the woman the fur of a fox that he had, and a small pouch filled with some herbal magic pills, with the instruction that the woman should take a pill a day until she finished all of them.

At first, everything seemed fine, but the baby began getting weaker and weaker as the winter months came, and the snow was falling daily.

Another lama passed by their ger on a rare winter pilgrimage, and the couple rejoiced to invite him in.
They conversed late into the night, expressing their concern for the health of their tiny newborn.

Suddenly, as if by Divine guidance, the lama asked them if they still had the fox fur that had been given to them months before.
The couple was surprised that the lama knew about the fox fur, and they said that yes, they still had it.

They took the fur out of the sack that it was packed in, and handed it to the lama.
The lama told them to make the fur into a hat, and to place the baby inside the hat, and to hang the hat at the center of the ger, above the fire where it was warm.

The couple followed the instructions of the lama, and their baby grew to be a healthy young boy.”

This is a well known folktale, and Tuya told us that even nowadays, Mongolian people believe that if they have a premature baby, they should wrap him or her in a fox fur hat.
They do not hang it from the rafters of their ger, like in the folktale, they just wrap it in a fox fur hat for good luck.

Many old Mongolian beliefs are a mixture of Shamanic tradition and Buddhism.

Tuya told us that her grandmother, who is a devout Buddhist who fully believes in reincarnation, told her that when the family’s dog dies, it is customary to cut off its tail, wrap it in a blue silk scarf, and sleep with it under your pillow.
By doing so, you are helping the spirit of the dog to reincarnate in its next life, as a human.