Preparations for our trip to South Korea… Are we flying into a potential war zone? 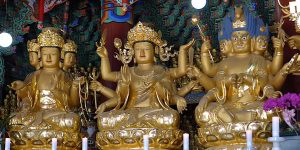 Our ski season in Colorado has ended.
Most of the mountains will be open until mid April, but we are heading towards New Zealand and farther on to explore South Korea.

We skied down the wide slopes of Vail for the last time this year.

We washed all our ski clothes and put them away in our “Sports” closets where we store our biking, hiking, diving and kayaking gear as well.

We hang our skis and boots in the corner of our garage and we hang our renewable ski passes in a place where we could find them again next year.

Recently, I have been following the weather reports in three countries.
On my iPad browser, I have three windows of weather reports, permanently open.

Here in Colorado I have been following the snow and weather report, so we can decide on which days to ski.

The other weather report that I glance at daily, is the one for the city of Kaitaia, located in the Far North of New Zealand about an hour and a half from our home.
The dry weather there for the past two months is finally giving way to a few much needed rainy days.
This means that our water-tanks that we left nearly empty will be a bit fuller for our arrival.

The third weather report that I follow nowadays, is the one for Seoul South Korea.
In a little over two weeks we head to South Korea for a five weeks trip.

The weather in Seoul is crispy with mostly dry days and cold nights.
I am hoping that spring will warm the days a bit more before our arrival.

Every day when I read the news, the papers are filled with the threat of war from North Korea.

I cannot avoid asking myself if it is smart to embark on a leisurely five weeks trip in a potential war zone….

I have no answers…
Today I read that the embassies of Thailand and the Philippines in South Korea, are preparing an emergency evacuation plan, for all their employees stationed in Seoul.
Not exactly good news….

And yet… The USA embassy along with Japan and the British embassies have not issued any warnings and make no evacuation plans.
Is it good news?
Who can tell…

I usually do not give in to fear.
We once rushed to the airport to catch an earlier flight to Okinawa Japan, right before a mega Typhoon was about to hit Okinawa, and we wanted to make sure that we will get there before they canceled all incoming flights.

We hardly felt the typhoon and had a fantastic time and continued on to the island of Miyakojima.

I lived through dozens of Hurricanes while living in Florida, not to mention wars and falling bombs in my earlier life in the land of Israel.

I am not afraid and I also do not have a sense (or an intuition,) of an eminent personal danger. (that is a direct danger to me or to Jules)

When I talked over the matter with Jules, he seemed to feel the same.
I also added that as a fail-safe plan, if a war did break while we were touring South Korea, we can always drive to the nearest airport and take the first flight to Japan.

Japan is only a short flight away and we can make a quick change and travel through Japan instead.

As always when planning a long trip, there are a lot of decisions to make.

The first question when considering our trip around South Korea was:
How do we move around the country?

The country has a very advanced and modern train system.
They also have a very good, clean local and long distance bus system.

But after getting out our yellow marker and marking a circular clockwise route across the map of the country, we realized that the easiest way will be for us to rent a car and to drive around the country.

Yes… I Know that we do not speak a word of Korean and that we cannot read a single sign….. but despite pessimistic opinions about driving in Korea and despite what we read on travel blogs, our rental company claimed that they do offer an English language GPS in the car.

In fact, they even offer what they call an “Egg” which is a Korean invention of a fast speed WiFi internet car device that we can use for Internet access.

So we rented a car for a month and if we will get lost, let us hope that we will discover instead better places than the ones we intended to visit….

The second question which we faced, was how to string all the dozens of exciting places we wanted to visit and see….
In other words, what will be the “Theme” of the trip…

After much thought we decided that we will make it a mountain-hiking-trip, in which we will hike in many of Korea’s wonderful national forests and climb up as many mountains as we can.

Between and around the mountains, we will visit and explore as many historical sites, museums, art, culture, villages and places we could see.

Then came the question of where to stay along the way.

In the cities, this question was simple and easy to answer.
You can stay in the middle of Seoul in one of the modern hotels.
You can choose between international brands that guarantee a certain familiar quality, rent a room in one of the many hotel- residence- condominium which all looked comfortable enough with modern showers, or you can head into the older neighborhoods around Seoul where you can stay in a HANOK.

A Hanok is a Korean traditional house.
It is built with the principles of Feng Shui in mind, which aims to bring harmony between Nature and human habitation.

Many of the old Hanoks around Korea are now converted into guest houses.

The room you will get if you were to stay in a Hanok, holds similarities to a Japanese Ryokan.
The room has a wooden floor and absolutely no furniture.

In many of the photos that I saw, there was not even the customary low legged tea-table and cushions which you will almost always find at the center of a Japanese traditional guest room.

On the wooden floor a thin mattress will be laid at bed time, and it will be made into a comfortable bed for your (hopefully) restful sleep.

After exploring all the choices of accommodations around our route, we chose an eclectic mix of places to stay.

Some places we chose for the comfort and convenience of their location and rooms, some because of their quirkiness and uniqueness (like a Hanok that is shaped like a huge mushroom with rooms that were built like smaller mushrooms inside) and others we chose because we thought they were funny (like an all yellow cutesy room in a doll house guesthouse) or for the irresistible appeal of staying in a room in a modern contemporary art museum with unparalleled views of the sea.

We have stayed in a similar place on Naoshima Island in Japan, where we were one of the first guests to stay in the newly opened ultra modern museum on a tiny fishing island that was converted into a living art installation.

Beside the pleasure of roaming the museum at night and sitting alone with the fabulous art exhibits, we also explored the many stunning garden sculptures, sat in a sunken hot tub installation under the stars and walked to the fishing village where every second house was converted into an art installation of light and form.

Because of our unforgettable experience in Naoshima Japan, we decided to pay the high price of staying in a similar modern art museum in Korea as well.

We also made reservations to stay at a humble traditional Hanok located in an ancient village which UNESCO recognized as a World Heritage Site.
The booking was a series of comical emails which I attributed to “Google Translation” because it all sounded like Haiku poetry.

In fact, it was immensely entertaining to read through some of the descriptions of restaurants and places to stay in rural Korea.

This is an example of a rural restaurant which I found located near one of the Mountains we intend to climb.
I was looking for possible places to eat after our hike:

“Pollack dried in the sun during winter
And the spring turn yellowish.
They become a nice food.
We offer broiled Pollack
Prepared with a special recipe
No one else can imitate.”

Or this restaurant description:

“Dalgi Yaksu (Dalgi Mineral Water)
was found in the Joseon period
under the reign of King Cheoljong.
Rich in iron, the mineral water is known to be good
for gastric disorders.
There is an old Korean saying which say: “What is healthy, tastes bitter.”
It is not true at Sonamu Sikdang!
Because the mountain vegetable soup boiled in Mineral Water,
is healthy and tastes great at the same time!
Enjoy the food in a clean, beautiful environment.”

Or this wonderful description:

“This restaurant serves the FDA approved
Seaweeds and seafood growing in the area
With strong sea wind.
The restaurant owner has fishing boat
And commercial fishing license
To use gill nets and fish traps.
The guests of Chubong Pension and Hoetjip
are welcome to rent the fishing boat named ‘Chubong Pension’
at a low price (just pay for the gas).”

Anyway…. I am getting excited and very happy to go.

I have some regrets that we did not allow more time in Seoul, which appears to be a fabulous city full of exciting thing to see and do….

More to come as our journey will start….

← Why do couples in long term relationships stop kissing….
Reflections on our upcoming trip to South Korea →