The Night Blooming Barringtonia Of The Ryuku Islands, Miyakojima, Japan 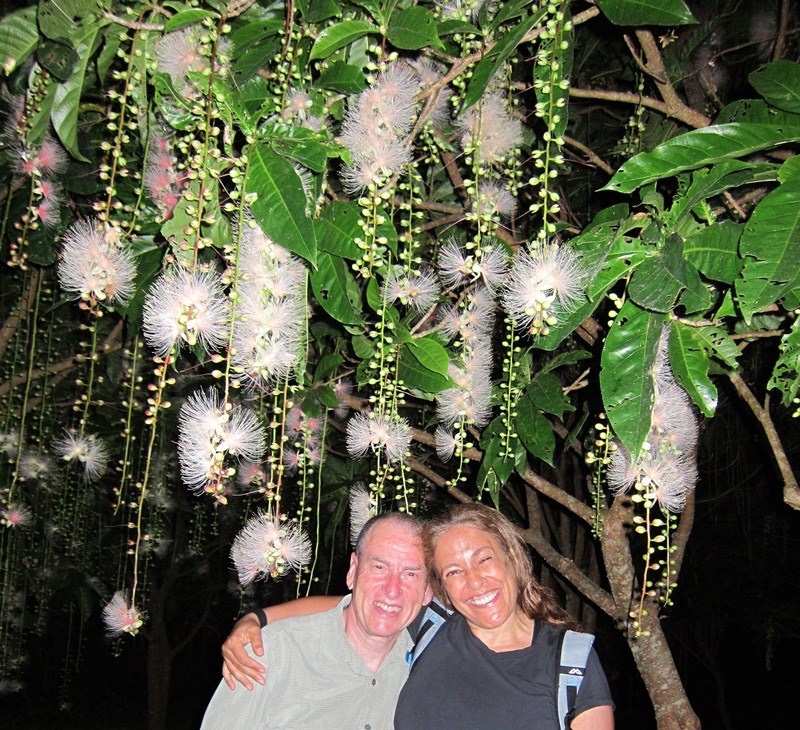 This morning breakfast consisted of fourteen small unique and delicious local dishes.
Among the more exceptional ones, was a dish of “fiddle heads in passion fruit dressing.”

Fiddle heads are the tender tops of a fern plant, and they are eaten raw or cooked.
In this dish, the fiddle heads were lightly steamed and served as a refreshing salad with fresh passion fruit.

We did our daily meditation in our room, said warm goodbyes to the other guests, and thanked the people running this wonderful guesthouse.

Other people also checked out, and the cleaning lady was airing the small bean-pillows and the thin mattresses on the coral rock wall outside the guest house.

We previously made plans to switch to anther guest house, on the north-eastern part of Miyakojima, right by Sunayama beach.

In contrast to our previous humble yet fantastic guesthouse, our new guesthouse is one of the two most luxurious guesthouses on the island.

It was another hot day in Miyako island, and as we turned the corner in the narrow parking lot in the city of Harira, Jules misjudged the available space and he scraped the front bumper of the car against the concrete.

Even though he was inching his way, the scrape with the concrete wall created an ugly dent in the bumper.
Both of us knew that this accident is going to cost us…
Jules’s spirit went plummeting down.

We talked about being extra mindful and choosing to take the extra turn when you are not sure, instead of trying to save time….
And then I tried to cheer up Jules by reminding him that all the hundreds of dollars we saved by not taking the extra insurance, meant that at times, you have to pay out of pockets for the deductible when accidents do happen…

But honestly….both of us were a little shaken, and the accident, albeit cosmetic, still cast a shadow on our day.

We drove to see two small islands that are connected to Miyakojima by bridges.
One is called Kurima Island, and the other is called Ikema Island.

On Ikema island we stopped for a lunch at a cafe in a luxury resort.
We were not really hungry, we only wanted to unwind and to enjoy the scenery from their patio and to get some drinks.

As everywhere else in Japan, Italian food is considered the height of sophistication, and the modern thinking Japanese people LOVE Italian food.
The only problem is…. That they have no idea how to make it tasty.

The lunch menu at this cafe, offered only Italian food, which for the Japanese, means pizza and a spaghetti.
The pizza is alway soggy with low quality cheese, since in Japan dairy products are not usually eaten, and it is always mediocre.
The pasta came swimming in butter and garlic and every time I tried it around Japan, it was bad.

This cafe was no exception, and I vowed NEVER to try Italian food in Japan again.

It was too early to check into our hew guest house, so we decided to go to the nearby beach.
It was an interesting beach with places to shade yourself under the large limestone and coral formations.

While swimming in the water, I noticed a shiny orange object.
I reached for it… It was a car rental key.
I asked the man floating next to me if it was his, but he said no…
I asked some girls on the beach who looked like tourists, but they also said no…

We decided to walk back to the parking lot to see if the car was parked there.
The car was a Nissan and the car rental’s tag, had the car’s plate number on it.

Indeed we found the car parked right by the toilets and showers.
We waited a little while for the driver to show up, but nobody came.
I was not sure what to do…

I decided to leave the key in the car’s door, for the driver to find it, when he/she returns.
I was a bit worried about doing that, because I noticed that they had left their clothing inside the car, and sometimes people lock their money in the car also, so they do not have to take it to the beach……

Ultimately, we decided that this is a fairly quiet and remote beach, on a tiny and friendly island and that we should trust the goodness of the human race and assume that nobody would break into their car….. and that when the people who lost the keys start looking for their car key, they would find it in the car’s door.

I hope I did the right thing…. I left it in the hands of their own personal karma and the loving protection of the Universe…

At Uplausagi guesthouse, we were welcomed by Yoko and her husband Naoki.
Both are friendly and humble people who traveled the world, Left behind the mayhem, stress and noise of Tokyo and moved to the island.
They designed and built this fabulous modern guesthouse, and they run it in a first class and very luxurious manner.

The rooms are “Western Style,” which means that they have regular beds, and not tatami mats.

The shower is high tech with a Toto toilet that warms up the seat, washes your butt when you’re done, and dry it up like in a carwash.

We asked Yoko, to recommend a good place to eat dinner.
She had made reservations for us at a local Japanese restaurant for seven o’clock.

Naoki took us in their minivan to the restaurant.
The chef was waiting outside the restaurant for us.
He was wearing a blue Japanese chef clothing, and a white bandana wrapped around his head instead of a chef hat.

He bowed to us very low, and guided us inside, where we were invited to sit in one of the only two private rooms that this place has.

The meal was one of the most unique ones we had on the islands.
It still offered many of the local vegetables, wild plants and local ingredients, but everything was done with a poetic touch.

We tasted some of the native plants, which they made into salads or tempura dishes.
It included the flower of the dragon fruit, which tasted a bit like an artichoke…..a local seaweed named “Assa”…..And a tempura of another fern’s flower which was also delicious.

With each dish we got an explanation of what we were eating, and each time the chef left the room, he bowed his head and touched the mat we were sited on.

After dinner we were served the traditional “Macha tea,” which is a foamy green tea made the by whisking the green powder with a wooden whisk.
All the instruments used to make the Macha tea, are bamboo, or ceramic, so it will not have a metallic overtone.

When we were done eating, the restaurant called Yoko and her husband Naoki to pick us up.

They came with their minivan, and inside it were the other guests staying at the guest house.
They were all jolly and bubbly with excitement and happiness… Something was going on…

We were told that we were going to see some flowers that only blooms during the night.

It was already very dark outside, and they used the navigation system to drive through the narrow paths going through the tall sugarcane fields.

I could not understand what was going on, but I felt the excitement of a mystery and an adventure coming….

When the car finally stopped, we were handed some lanterns, and were offered to be sprayed with a mosquito repellent.
The Japanese family that was with us and Jules as well, sprayed themselves generously as if they were taking showers…

We walked into what seem to be a nature preserve with mangroves and a swampy lake filled with the call of cicadas, the cries of frogs, fruit bats, large moths and trees.

The path was lined with Barringtonia trees, that grow only in coastal mangroves or swampy area in the tropics.
They flower ONLY during the night.

By early morning the next day, all the flowers that bloomed during the night, fall down and become part of the mosaic of the forest floor

These night-blooming flowers are pollinated by night-flying creatures and can be found mostly in tropical coastal habitats around Australasia, (but some variations also grow in coastal forests in Africa)

We walked along the forest path, admiring the fragrant flowers that hung down from vines ropes….. Each ending with a white or pinkish pom-pom cluster of flowers resembling puffballs.

We were like children, drunk with the intoxicating fragrance of those flowers.
The experience was enhanced by the dark night and by the bats zooming above….

We cried from joy when one of us spotted a tree that was exceptionally laden with a large amount of flowers, and each one of us called the others who rushed over to see it….

It was a magical night indeed… And one which the guidebooks does not mention, and if we did not stay in a small guesthouse, we probably would have never heard of it….

A one point, the chef from the restaurant came running into the forest.
Apparently his waitress made a mistake with the bill, and overcharged us by ten dollars.

Despite the fact that he knew we would be coming back to his restaurant for dinner the next evening, he still drove all the way through the sugarcanes and walked into the
forest, to give us back the ten dollars…

He showed such a display of care and concern…… it made us feel so grateful and so happy to be human….
His concern and also his careful cooking, stands in such a big contrast to the indifference service and attitude that some people in other parts of the world, display towards one another or toward their jobs….

In fact, the next morning this chef called our guesthouse and told Yoko that he will be making an all new and interesting menu for us tonight.

He asked Yoko to ask us if there was any special dish that we exceptionally loved, so he will prepare it for us again…
Even though we LOVED the island jumbo shrimps that he served with REAL grated wasabi, we told him to make his own choices and promised that we will be happy with his new menu.

The Japanese family we came into the forest with, suggested that we all go to sing in a Karaoke club, but we were a bit too tired and refused.

They accepted our decision, and overcame their disappointment by reminding themselves that we would probably not be able to sing anyway….. because all the songs will be in Japanese and they will not have English subtitles…

A day that started with a shadow cast by the damaged car, turned out to be a most blissful day….. I feel so happy to be alive and so grateful to be here!

← Japanese beach culture in Miyakojima Japan, and a bit about tattoos
The blessings of work, and our last day on Miyakojima island Japan →