Japanese beach culture in Miyakojima Japan, and a bit about tattoos 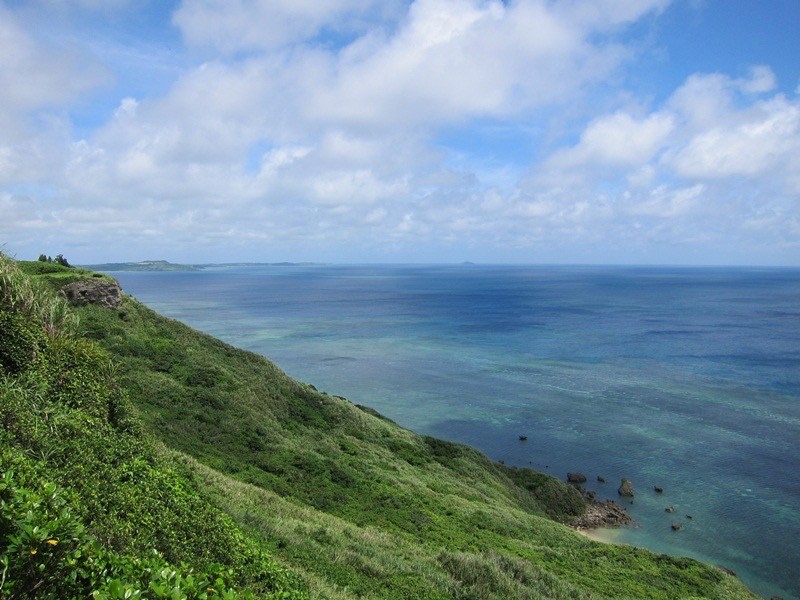 The beaches of Miyako-jima are sandy white and beautiful. (Jima is also pronounced Shima, and it means an “Island” in Japanese)

There are also beaches with a lot of coral reef… they are not so good for swimming, but they are wonderful for snorkeling.

The water at this time of the year, (end of June) is warm and pleasant.

Last night I slept very good.
I got adjusted to the thin mattress, and I think that I was tired after getting a bit burnt by the sun, from eating all varieties of good food, the surf and going for a run…. It all made me tired and sleepy.

We drove around Miyako island to sass it out.
We stopped at the town of Hirara, Miyakojima’s biggest city.

Hirara is a tiny city with a small amount of streets and businesses.
(tiny in Japanese standards)

We bought some mini mangos from a farmer’s market and enjoyed their refreshing sweet taste.

It took us about three hours to leisurely drive around the island, with plenty of stops to enjoy the view and the scenery.

The island has many fields of sugar cane, and the roads are mostly narrow paved lanes through the sugarcanes.

The road to one of the capes disappeared into an overgrown vegetation, but we were able to make our way until we reached a small parking area and the beginning of what looked like a hiking trail with an English sign saying that this was a wildlife reserve.

We decided to go for a hike down this lovely path and in a short distance we reached a crescent of beach that was totally empty of people.
I threw off my clothing and run to the water.

We spend a lot of time sitting in the shallow waters, talking and enjoying this deserted beach which nobody uses.
We marveled at how soft the sand was and at how people always like to congregate together in the busy beaches…… While space and quiet are such a luxury….

I also reflected about how people love to buy guidebooks and feel secure when they travel to foreign countries with a guidebook…. While my experience is that so many wonderful places and things to do and see, are NOT mentioned in any guidebook…

This magnificence cape beach we rejoiced in, along with other sites that we visited in Okinawa, were not in any guidebooks.
The guidebooks and even the internet guide sites, suggested all the touristy things that you can see and do, and none of these beautiful places which requires a bit of off road exploration.

When we run out of drinking water on our deserted beach, we continued our exploration of the island.

We came back to the swimming beach (called Yonaha Maehama,) that is right by our guesthouse and found it packed with cars and people.

It was a Sunday and many people came to the beach to drink beer and to eat fried octopus balls.

This beach offers jet-ski rides, waterskiing, and a banana ride, (in which a jet ski is pulling people sitting on an inflated banana float,) which seemed to delight people to no end.

Despite the crowd, we decided to stop and to observe the Japanese beach-culture.

We saw many girls at the beach with all of their cloths on, touching the water only with their toes.
Traditionally in old Japan, getting a suntan and looking brown, was considered very unattractive.
Only peasants and lowly farm workers had brown skins, while those who considered themselves to be more refined, kept their skin white and even applied white powder to their faces.

Nowadays, the young women no longer powder their faces with white powder to look pale and white, but some girls are still very concerned about keeping their skin white.
It is not because they fear skin cancer, it is still a measure of beauty.

Being white, in Japanese is called Omoshiroii, which is the same word used for “interesting,” “beautiful” or “exciting.”

We also noticed that some of the young women as well as the permanently tanned beach boys, had tattoos.

Years ago, the only people with tattoos around Japan, were those who belonged to the Yakuza (Japanese Mafia).

These days, young people travel the world and they see that in many countries, decorating the body with tattoos is commonly done and is even a mark of “coolness” and progressive style, and so they too get tattoos.

But it is still NOT accepted in Japanese culture.
The only place where we saw a handful of women with tattoos, was here in Miyakojima and on Okinawa island.

Next to our guesthouse, there is a luxury resort.
We looked them up on the Internet, because Jules broke his sunglasses, and we were wondering if they had a sport shop inside the resort, where we can find a pair of sunglasses to replace his broken ones.

Jules looked up the luxury resort online, and he mentioned to me that they have a warning on their website, saying that people with tattoos, are not permitted to use the pools and the beach, the cafe, the dining rooms or any other communal area in the hotel.

In any other part of the world, this would be considered extreme discrimination…

It made me wonder if a foreigner wearing an evening dress showing her shoulder tattoo at this resort, would be approached by the management and asked to cover up or leave…

This is a very different kind of discrimination…
It is not based on the color of your skin, nor on your race, religion, nationality, your gender or economic status… It is a discrimination based on your past decisions or aesthetic choices.

You may have gotten a tattoo when you were young and careless, or simply because you thought it looked cool…. And here in Japan you would be looked at as a potentially dangerous person with questionable morals and with a possible connections to the mafia…

Many people do not know this, but tattoos are as old as human civilization.
It was initially done as a measure of protection.

People made skin tattoos, as a badge of tribal membership, to indicate that they belong to a certain tribe.
This way, when they traveled to do trades or ventured away from their home in search of water or food, they knew that their tattoos would protect them.

The way a tattoo protected a tribal member, was because any person considering to rob or to harm them, would think twice because their whole tribe would come after the attacker and would avenge their death by killing everyone.

In those primitive early days, when human consciousness was low and people lived short violent lives, focusing on survival and food, tattoos were membership badges that everyone HAD TO wear on their skin.

Never mind all that… We never went to the resort to check for sunglasses.
After a fabulous dinner at Tukayama Sou, that featured twelve small vegetable dishes, we drove to the 24 hours minimart to buy ice cream, and we found a pair of sunglasses for Jules.