Reflections about our physical design 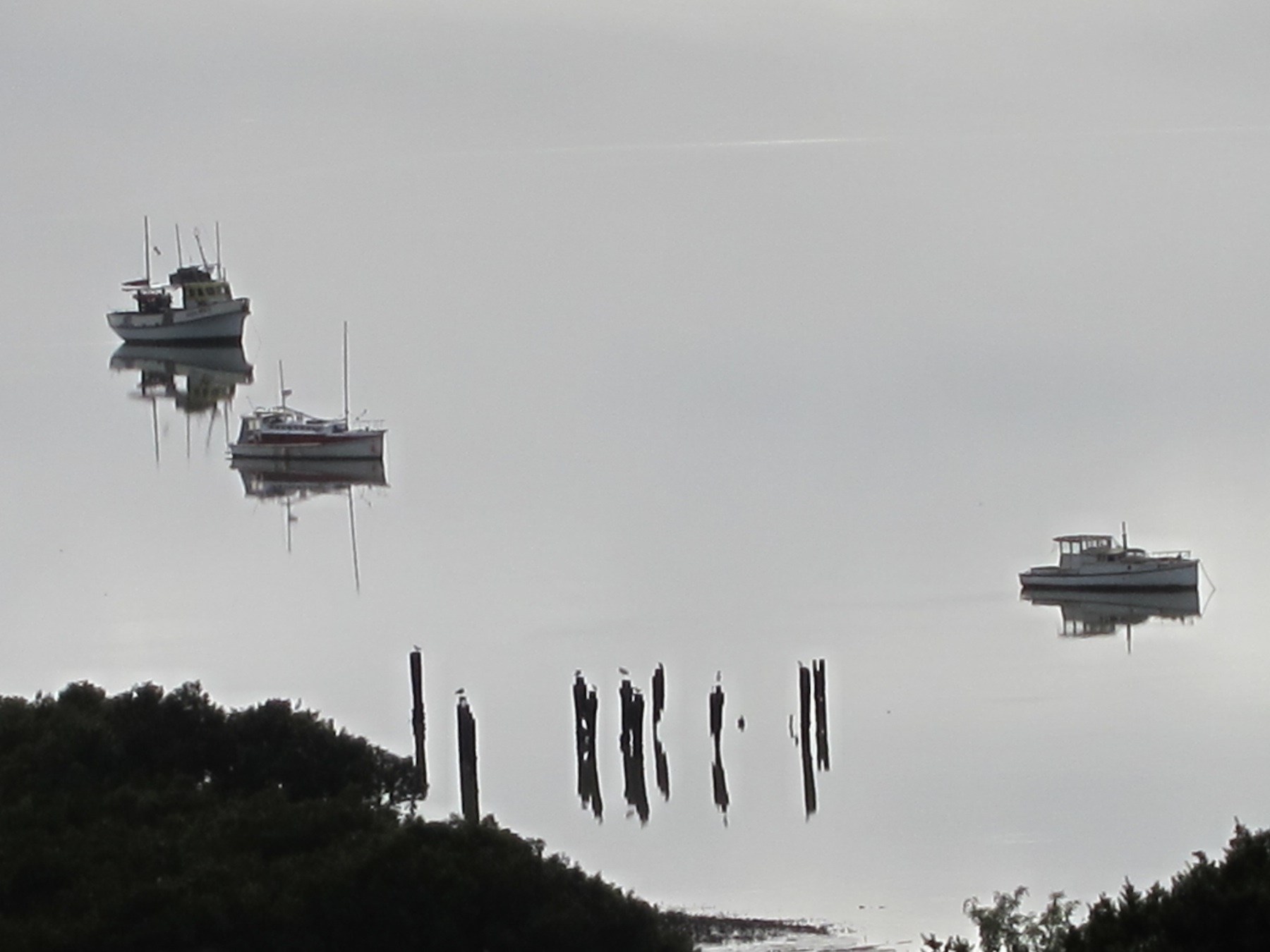 I enjoy so much being here on the shores of the Tasman Sea in NZ.
It is so beautiful, and from every window and door I can see vast views of the harbor, or my eyes can rest on our lovely garden, so full of flowering plants, trees…. Butterflies and birds.

Life is so quiet, easy, stress-free and fun……

Days can pass by, and the only thing that casts a tiny shadow on my day is how well I did in the studio….
If while painting in the studio I did something I was less than happy with, I usually carry it with me as if it really matters…..

Of course all of those tiny dissatisfactions with the progress of my work are all fixable and easy to change the next day, yet I find that I allow the feelings of dissatisfaction to stay with me a little longer than I should…
I should shake them off and dismiss them into the nothingness from which they came…

I sit in front of the water and dream….
This morning the mist on the harbor made the boats look like they were floating in mid- air….
Later in the day, the mist cleared, and the sun promised a wonderful day ahead….

I often wonder about things when I sit in front of the water…
I think about how little we know about the real world…. About the nature of our bodies….and about Life in general…..

Take for example the beauty and grace of the life of Lobsters….

Do not think about how they end up boiling in a pot in a restaurant…. Allow me to tell you about how advanced they are as physical creatures…

Lobsters do not grow old.
In fact, the older the lobster, the more it increases in its capacity to reproduce.
Older lobsters are MORE fertile than mature adult ones.

Lobsters can regenerate new legs, claws, and antennae.
In fact they can amputate their own claws and legs (autotomously) to escape danger.

The term ‘amputate’ can be used in the passive sense as well.
Some lobsters were seen to spontaneously drop a claw for no apparent reason…….. Maybe it was not perfect, or had grown to be too heavy, and it impaired their speed….since they know that they can regrow it again soon anyway…

After dropping or losing a leg, claw or antenna, a lobster will grow it again the next time it molts (sheds its shell).

When the time comes to Molt, they secrete enzymes that soften their hard shell and connective shell joints. The shell splits open along the back and the creature backs out of it, leaving it behind……

During molting, the lobster will emerge out of its shell completely whole, including the membrane that covers the eyes.

Lobsters increase their size by about 20% at every molt.
By the time a lobster achieve adult size, it will have molted about 20-25 times, averaging 4-5 molts a year.

After a molt, the crustacean is vulnerable because the new shell is very soft.
It will hide among the rocks on the bottom for 6-8 weeks until its shell hardens enough to offer some protection.

Lobsters come in different colors.
There is the usual brown, dark red, light red, orange and pink, but there are some which are bright yellow and bright blue, as well as faded blue and even some which are nicknamed ‘The Jokers,’ because they are half black and half orange.

Lobsters, like snails and spiders, have blue blood.
Their blue blood is due to the presence of haemocyanin, which contains copper
(in contrast to vertebrates and many other animals which have red blood from iron-rich haemoglobin).

In general, lobsters are 25–50 centimeters (10–20 inches) long, and move by slowly walking on the sea floor.
However, when they flee, they swim backwards quickly by curling and uncurling their abdomen.
A speed of 5 meters per second (11 mph) has been recorded.
(This is known as the caridoid escape reaction.)

Recent research suggests that lobsters may not slow down, weaken, or lose fertility with age.
In fact, older lobsters are more fertile than younger lobsters.

This longevity may be due to telomerase, an enzyme that repairs DNA sequences.

Scientists have claimed that lobsters could effectively live INDEFINITELY, assuming they suffer no injury, disease, or are not captured and end up on a restaurant menu……..

Their longevity allows them to reach impressive sizes, and the fact that they molt, allows them to periodically repair any injury and physical imperfections…
According to the Guinness World Records, the largest lobster was caught in Nova Scotia, Canada, and weighed 20.15 kilograms (44.4 lb)

Lobsters are not the only living creature which science admits could biologically live indefinitely:

Tardigrades
Tardigrades, otherwise known as “water bears”, are highly resilient microscopic animals.
Capable of surviving extremes conditions such as heat, radiation, drought, and even the lack of air and space by going into suspended animation, when their metabolism slows to near zero and they simply wait out the harsh conditions until the environment is more favorable.

Jellyfish
Turritopsis nutricula is a small (5 millimeters 0.20 inches) species of jellyfish which uses transdifferentiation to replenish cells after sexual reproduction.
This cycle can repeat indefinitely, potentially rendering it biologically immortal.
It originated from the Caribbean sea, but has now spread around the world.

Planarian Flatworms
Planarian flatworms (both sexual and asexual) appear to exhibit an ability to live indefinitely and have an “apparently limitless [telomere] regenerative capacity fueled by a population of highly proliferative adult stem cells.”

Bacteria
Bacteria are said to be biologically immortal, but only if they live within their colony.
An individual bacterium can easily die.
The bacteria has the capacity of cell division.
The divided cells can be regarded as “rejuvenated” cells, because the damaged macromolecules have been split between the two cells and diluted.

Hydra
Hydras are a tiny fresh-water animals, possessing radial symmetry and no post-mitotic cells.
The fact that all cells continually divide allows defects and toxins to be “diluted”.
It has been suggested that hydras do not undergo senescence (aging), and as such are biologically immortal.

Leaving all the scientific terms aside….
I think about how nice it would be if we could molt like lobsters….
Just drop the aged or damaged physical body and take on a fresher version of our bodies, with a new finger to replace a missing one, or a new fresh leg….

At times, I do think that this could happen…. If we only move away from the big illusion of reality, into our spiritual bodies, and leave behind the hard shelled physical bodies of our past…. The ones we imagined ourselves to live inside,….. While we held a lot of limited and fear based ideas….

Maybe this transition is so gentle, as not to be noticed by others….. Maybe even by us…
Perhaps we are constantly transforming our bodies…..

Some people who have described having out of body experiences, spoke about how they saw the body as a shell, laying on their bed……… (or while pronounced dead on the operating tables)
They felt that they were observing all of it while standing in their REAL Body, which was much the same, only spiritual, perfect, light-filled and luminous with energy…..

Still, they described seeing their own hands and legs, but that they had the capacity to fly and move through space effortlessly…
They all described the physical body (which they had molted?) as an empty shell, and said they felt no connection at all to it….

Anyway….. Just something to share and to think about…..
Wishing you a most wonderful day in the studio or wherever life takes you!

(Above are photos of my studio in NZ, and the way the harbor looked today)

← Reflections about longevity, good health and vitality
A Short Trip To Auckland NZ →