Venice Carnival – Believe it or not, but we are STILL just getting there 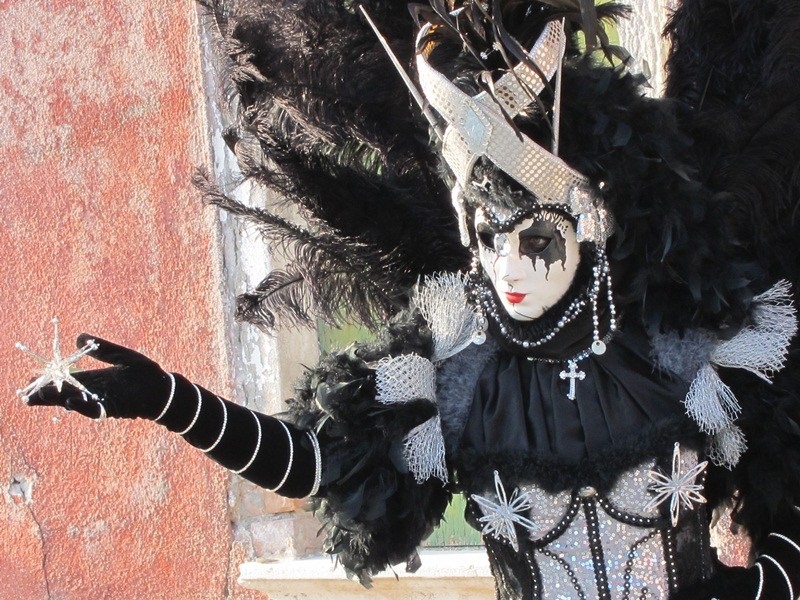 Our plane from New York landed into a snowstorm in Rome.
We only had one hour to make it from the time our plane touched the snowy runway in Rome, to the domestic terminal to board our flight to Venice.

My mind conjured up long lines of customs, immigration or passport control,…… plus taking the train to the domestic terminal, needing to pass through yet another security checkpoint… I was not sure that we will make our flight…..

By the time our international flight reached the gate and we disembarked, we had only 35 minutes to make it to our next flight.

The train to the domestic terminal, was a breeze…. The security checkpoint was short and since we did not have to remove our shoes, we passed through it quickly.

The passport control was a joke… The kind of jokes that I LOVE….
The immigration officer looked at us, saw the outside blue and gold of our American passports,…….. he did not even open… nor looked at the front page, which contains the photo and validity date………he simply opened the passport to a page that had an empty space, and he stamped his ink stamp on it.

I could have traveled with a small notebook covered with blue and gold masquerading as a passport, for all he cared…

We made it to the gate with ten minutes before boarding.

As we were running to make it to our gate, we passed an Internet shop and I stopped and asked the nice guy if he thought he could fit our iPads with an Italian Internet micro sims, in LESS than five minutes… And he said SURE…

€20 later and still with five minutes before boarding time, we made it to our gate, only to find…. That our flight to Venice was two hours delayed…

Two hours later we boarded the plane.
The pilot announced that due to the snow storm, they were running a stormy weather procedures, and that as soon as ground crew will de-ice our wings and tail, we will be ready for takeoff…

FOUR frigging hours later, the de-icing machine finally made it to our plane, and we took off.

When we arrived in Venice, it was already very dark, but luckily it did not snow.

Our bags however….. Did not make the long journey from Colorado to Venice at all…

After standing in a long line to report our lost baggage, we were told that Alitalia had NO idea where the bags were…

We were sent into the freezing city, with no information about when to expect our bags, along with many other angry vacationers who also did not receive their bags.

Venice does not have any car traffic in it, so to get to the city from the Marco Polo airport, you need to take a boat ferry.

Since we had no bags, we simply walked to the ferry terminal, where we were told that our online pre-booking and payment for the ferry, was not valid, and that we have to buy the tickets yet again…

I wondered how many MORE things could go wrong on this trip…. And why all this was happening…. Usually our travels are not at all like this…….

I was very happy that I wore my warm boots, my thick coat, my gloves, my hat and a scarf.

Jules on the other hand, did not wear his gloves or a scarf, he left them in his checked in bag.
In fact, he only took his warm hat and coat, upon my insistence at the Colorado airport.
I told him to take them out of his check-in bag, just in case our bags were delayed…. Did I have a premonition that our bags may not arrive on time…. Or was I just being extra cautious…

We stepped out of the Alilaguna ferry boat, into the cold and windy night.
The waterfront of Venice, is wide and I could spot people wearing carnival costumes and masks.

Silvia, the lady coordinating our rental apartment, waited for us at the San Zaccaria Ferry Terminal, to guide us to the apartment that we rented.
Venice is a maze of narrow streets, bridges that crosses the narrow canals, and many twisting alleyways.
A wandering and disoriented tourist, can easily get lost in the maze…

It was already 9:30 at night, and Silvia was waiting for us since eleven in the morning…. We had called to inform her of the continual flights delay, but still we felt terrible knowing she was waiting for us, since the weather was so freezing cold.

Our apartment is located in the Costello neighborhood, in a quiet yet central location, and it is spacious and lovely.
It actually looks and feels better than I expected.

The hardwood floors are warm and the kitchen is modern and open.
There is a lovely sitting area and a very contemporary feel to the place.

We left the apartment to have dinner at Ten at night… Luckily they do eat dinner late in Venice.

Right around the corner we found a small and welcoming Osteria called ‘Oliva Nera’ where the owner Dino, and his wife, fed us a most lovely and creative fresh seafood meal.

The walls of the restaurant were covered with photos of the owners.
One of the photos featured them vacationing in Hawaii, which they confessed was their favorite vacation place.

We chatted about the economy in Venice, about the cruise ships depositing four thousands (mostly American) people on the island four times a week, about tourism in the area, about the Italian economy since converting to the Euro, and about this and that…

Dino folded his arms on his chest, and said that there is an expression in Italy, that says that they are “Sitting by the window,” which means that they are observing….waiting for the next summer, to see if things will pick up and get better….

The quality and flavor of the food was a shoulder above everything that we can get in Vail or in Aspen.
It was not chef- inventive as we get at home, but more a creative twist on the local traditional cuisine.

The fresh artichoke sauce for the fish, and the creamy polenta were dreamy…

Dino painted for us the dessert choices on a brown paper.
He drew a large sunflower with seven petals, and in each petal he wrote the choice of dessert for the day.
After such a creative effort, we chose a dessert even though we initially thought to skip it.

He also gave us two shots of his home made Lemonchelo, and Orangechello, which were liqueurs that he made from the peel of each fruits.
When I thanked them at first but refused, thinking that it was too late to drink alcohol, his wife Isabella, said: “Try it… Your apartment is just down the streets, two houses down… It is not like you have to drive…”

We slept well that night and were woken up by the lovely church bells, to face a new day…

4 Comments on “Venice Carnival – Believe it or not, but we are STILL just getting there”