A wet day in Tokyo Japan 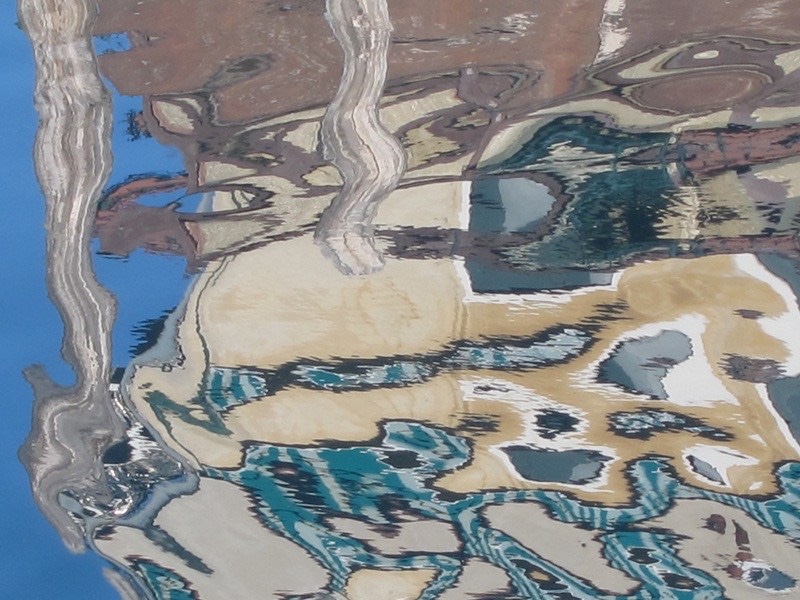 The first snow of the year in Tokyo fell over the trees outside our windows.
We were sitting in front of big glass windows having breakfast, and the snow was blowing as if in slow motion.
It melted almost immediately.
There was no snow accumulation on the ground.

We debated what to do with our day.
It seemed like the best way to spend a wet rainy and snowy day in the city was to visit a good museum.
In a funny twist of faith, a few of the museums that I wanted to visit were closed for renovations or were closed because they were installing new exhibitions.

We decided to go to the MOT, the Museum of Contemporary Art.
Situated in a small neighborhood, the museum is said to host a good collection of contemporary art, as well as changing exhibitions.

The concierge at our hotel printed for us the directions via the subway- the fastest and easiest way to move around Tokyo.

We took the subway to the museum, but just as we arrived and braced ourselves for the twenty minute walk in the cold, Jules spotted a small English sign on the subway wall.
It said that MOT will be closed until February for installation of a new exhibition…

I did check their website before we made the journey here, but their website had no sign saying that they were closed for a few weeks.

So back into the subway we went and we took another train to see the Ueno neighborhood.
Ueno is home to a major park that has in it a few major museums.

When we got out of the subway at Ueno, the wind and rain were so strong, that the prospect of walking through the park was unappealing.
We strolled behind the crowd exiting the subway.
I decided to join the herd of people and to see to whichever direction they went.

The crowd of people walked straight into a fish market.
The Ueno fish market was not as impressive as the famous Tsukiji fish market of Tokyo, but still it offered a fabulous selection of things we’ve never seen.

The vendors were calling out their offerings, praising their goods and announcing their discounts and sales.

The fish market was edged by other markets selling clothing, shoes, bags and thousands of other goods.

After Ueno we visited the famous underground area of Ikukuburo.
The subway station of Ikukuburo has three major department stores, many restaurants, stalls offering food, and many shops, all occupying a large area of covered shopping delight.

We needed to buy some things.
For one, Jules was walking with a pair of gloves that we’d bought in a remote Tibetan town in the summer.

It was unseasonably cold when we visited that Tibetan town, and in a small shop the attendant pulled a small bag filled with hand knit gloves.
Those gloves may have been good in the cold spring, but they were useless for this trip in the winter in Tokyo.
Jules needed a new pair of gloves.

I needed a coat.
My coat was warm, but as ugly as a gremlin.

I also bought it on the fly.
I bought it years ago when we visited Jules’ daughter in Maine in the Spring.
Maine had a very cold spring that year, and we went to LL Bean, Maine’s major outdoors outlet, to buy a warm coat.

Because it was off season, all I could get in Freeport, was last season’s leftover ski jackets…….and they were ugly and……purple.

I felt it was time for a new Japanese fashionable puffy winter coat…. One I can also take with me to Venice in a few weeks, when we go to see the Venice Carnival.

Oh…. The agony…..I’ve already written about the difficulties of trying to buy a dress in an Asian culture, when you are NOT a small Asian girl….

Almost nothing fit me.
Most of the coats that I tried were so tiny, that they would only fit teenage girls in our culture.

The ones that did fit me, had a price tag that almost made me faint….
I was not ready to invest a thousand dollars or more on a department store coat.

I also had to admit to myself, that I DO HAVE a lovely designer winter coat in my closet in Colorado…. OK…. OK……….. I have TWO fabulous designer coats…

Just when I was ready to give up on the search for a lovely and fashionable winter coat, I found a coat that I liked.
It was not a practical coat.
It was light colored, almost off white, and it had a funky design.

After two months of nothing but hard work in the garden of our property in New Zealand, and practically living in sweatpants, I was tired of practical clothing, and wanted something with a flare…

This frilly non practical winter coat was the antidote that I needed….
And I bought it.
OK……OK…..I will admit it…… I bought TWO.

← Another day in Tokyo, and a bit about Japanese Shinto
Japanese Shibuya and Harujuku fashion styles, the teenage culture and equal rights for women →