Thoughts about cycling in China 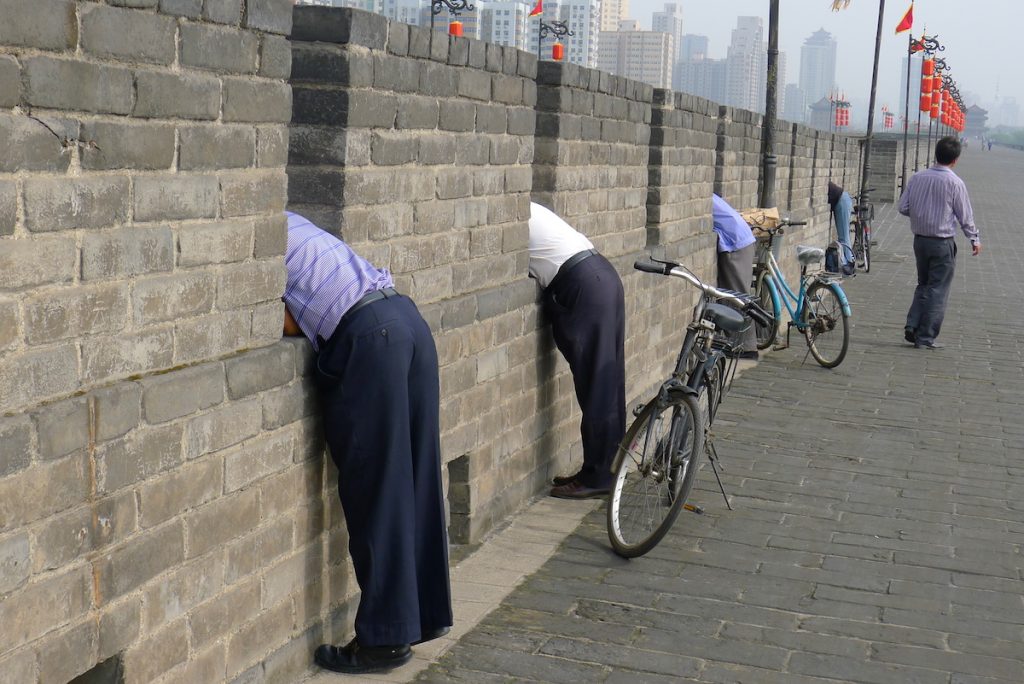 On a quiet and narrow road, at the edge of the desert in China, we were cycling quietly.
It was a hot day and there was a band of green trees and plants on the side of the road, where it was irrigated, but beyond it was a large stretch of a flat dry desert.

Anyone who cycles long distances, knows that it can get very monotonous if there is no change in terrain or scenery. You stay in the same gear and your legs just take over and pedal seemingly automatically and without thought.

We had our support vehicle behind us, carrying our language and provisions, but instead of asking them to follow closely behind us, we told them to find a nice shaded spot under a tree, and to meet us on the hour every hour, so we can replenish our water supply.
It was so hot that we were drinking two big bottles of water every hour.

We saw a huge eighteen wheeler truck parked in the middle of the road.
The shirtless driver was fixing his truck.
When it is extremely hot in China, even in the cities, many drivers remove their shirts and drive bare chested.

As we passed his truck, parked in the middle of the road, the driver waved at us enthusiastically and asked us to stop….

It was so hot and we were moving in speed, plus our shoes were locked in the clips to our pedals, so we just waved hello back to him and cycled past him.

The driver collected his tools and his shirt, got into his semitrailer and drove behind us.
He passed us dangerously close and came to a screeching halt right before us, blocking our road.

He jumped out of his truck and waited for us, waving with both arms.
We had to stop.

He was so excited to see us there, in the middle of nowhere… with no bags or provisions….
He checked out our bikes, squeezed our horns and examined our GPS…. He explained that he wanted to give us a ride….
He can throw our bikes in the back of his trailer, and give us a ride to the next town…or wherever we wanted to go to……

Our Chinese was non existent…but we tried to explain that we did not need or want a ride….we were there to cycle for fun…. A joy ride…

The driver looked puzzled….. How can anyone choose cycling, which is so strenuous, over a car ride?……… And to do it here in the desert….. in this heat?……. Were we crazy?….

We assured him that we were OK,……We showed him that we had water and all the snacks we needed….
We refused his invitation to take a sip from his bottle, which probably contained some home made alcohol….and we said goodbye…..leaving him looking confused as to the peculiar habits of the strange “Lowai”….. (foreigners)

Many years ago, the people of China were mostly mobilized by bicycles, or if they needed to carry things, on donkeys, horses and camels.
Now with the affordability of the motor vehicles, it is all cars and scooters, almost NOBODY is cycling.

Even six years ago, I still remember large groups of bicycles, but no more.

Over breakfast in Beijing, I looked at the newspaper, and on the bottom of the front page (still high news) was a photo of a Scandinavian ambassador, (I do not remember now from which country) who was cycling to work every day.

In a country in which wealthy people and politicians move ONLY in black sedans, this was front page news.
The interview said that he cycled on most sunny days and that it was fun and good for his health.

To me, the fact that people express awe at choosing to cycle for fun, is like someone being surprised that you swim for fun, if your boat was not shipwrecked……
You do it because it feels so good…

Well…. These were my thought this morning…. I dreamt about bicycles last night…. I have no idea why…. Sorry for boring you…. I am off to start my day.
Wishing you all a great day!

← Fun water-sport memories from Greece
My beef with Mother Teresa →