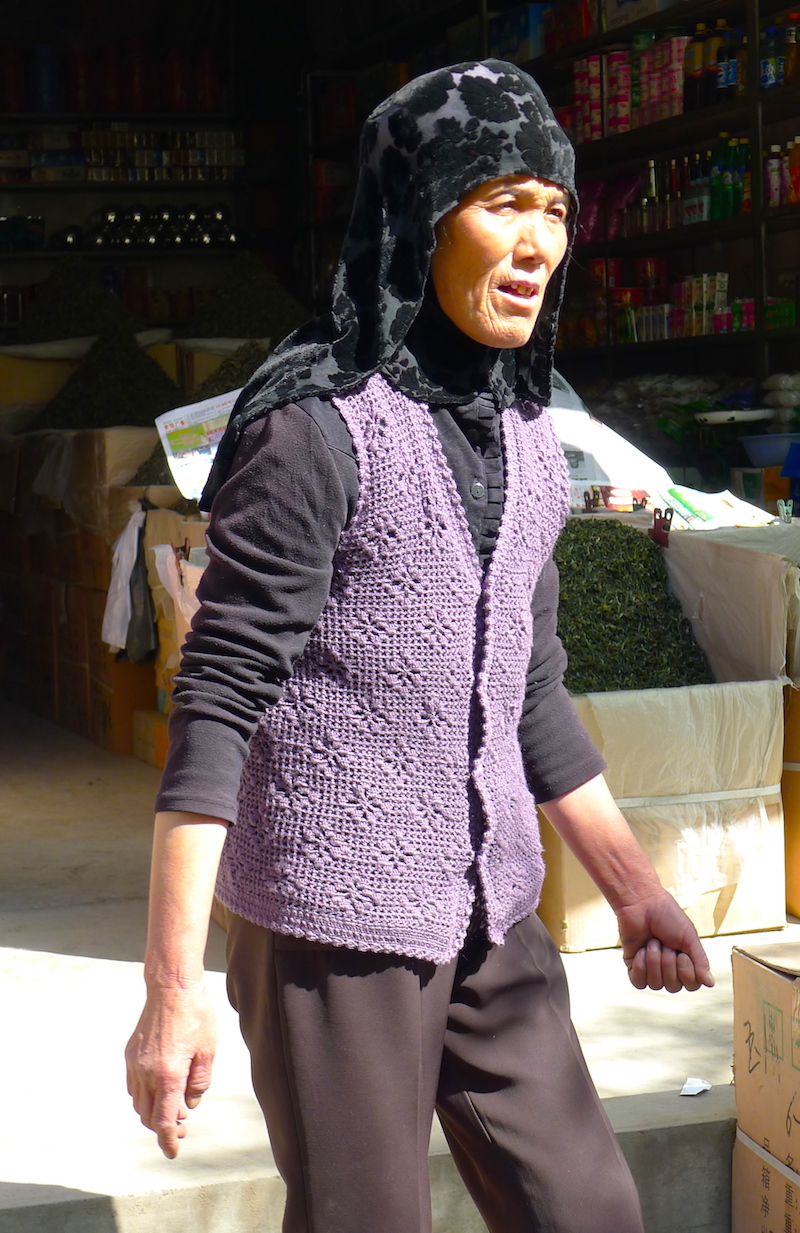 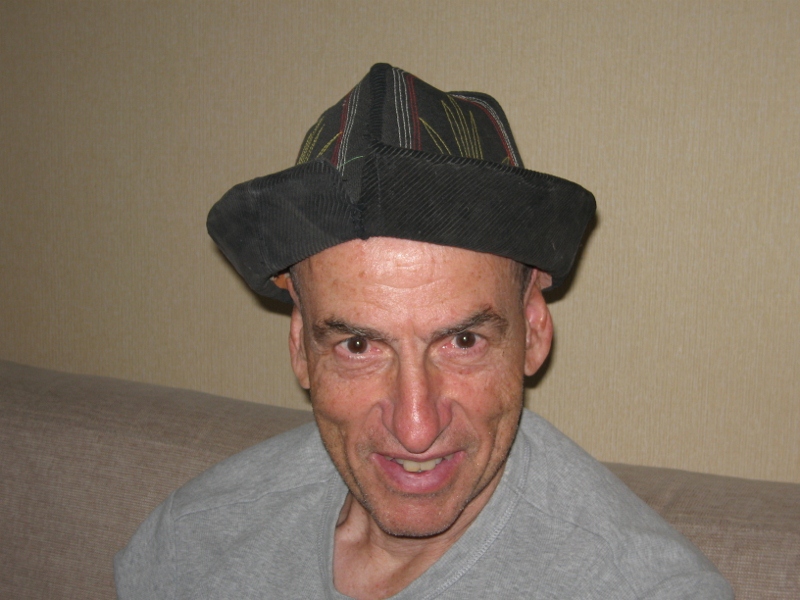 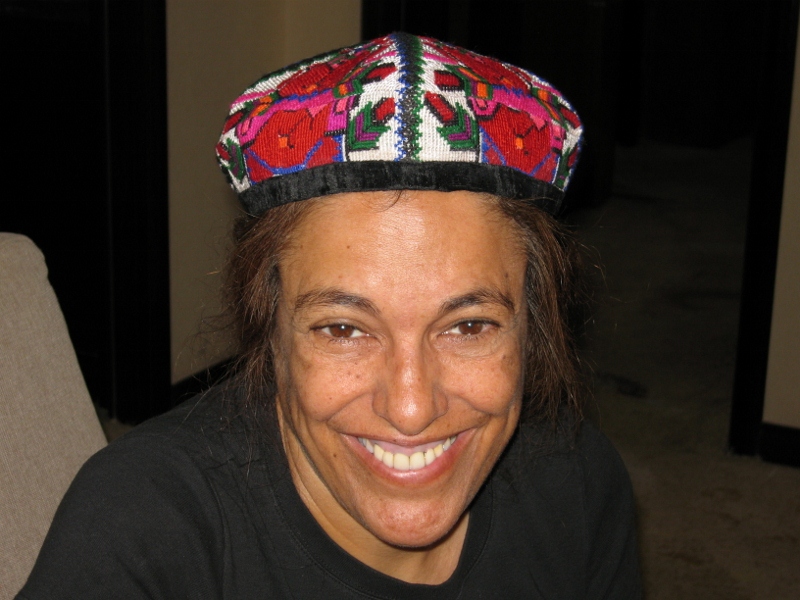 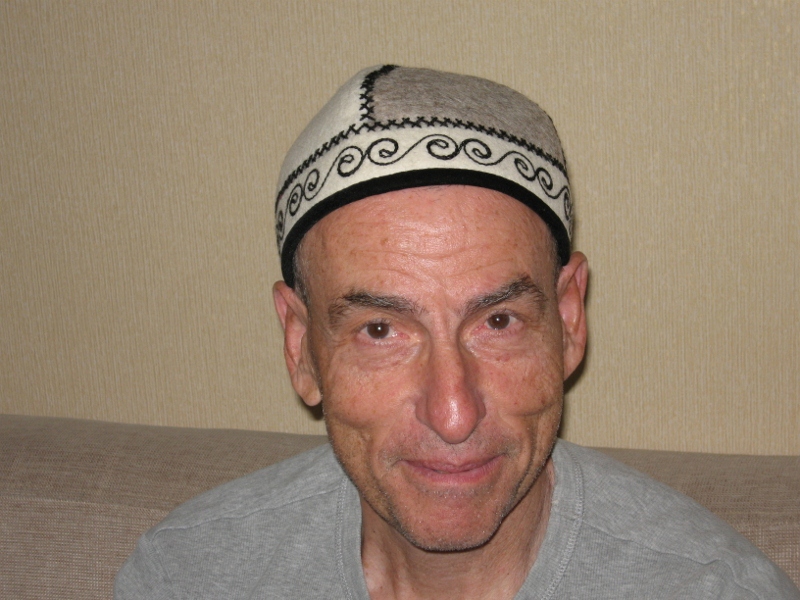 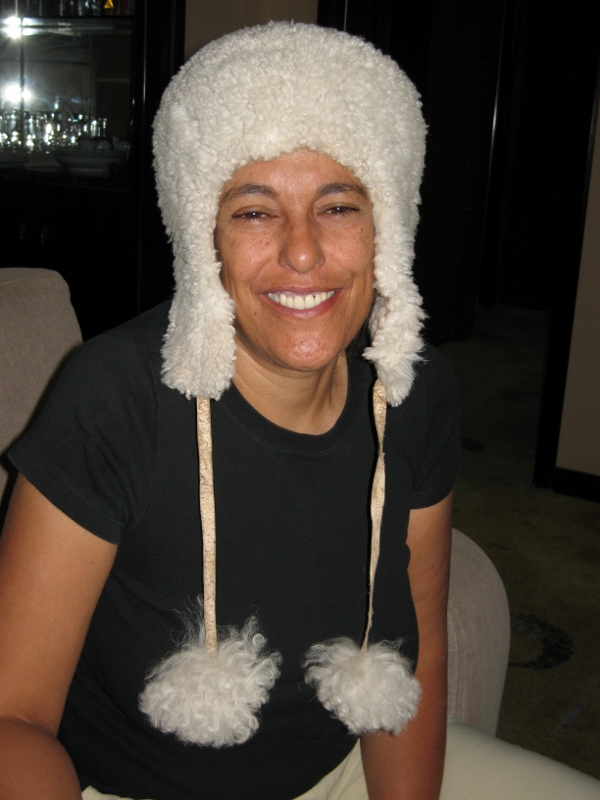 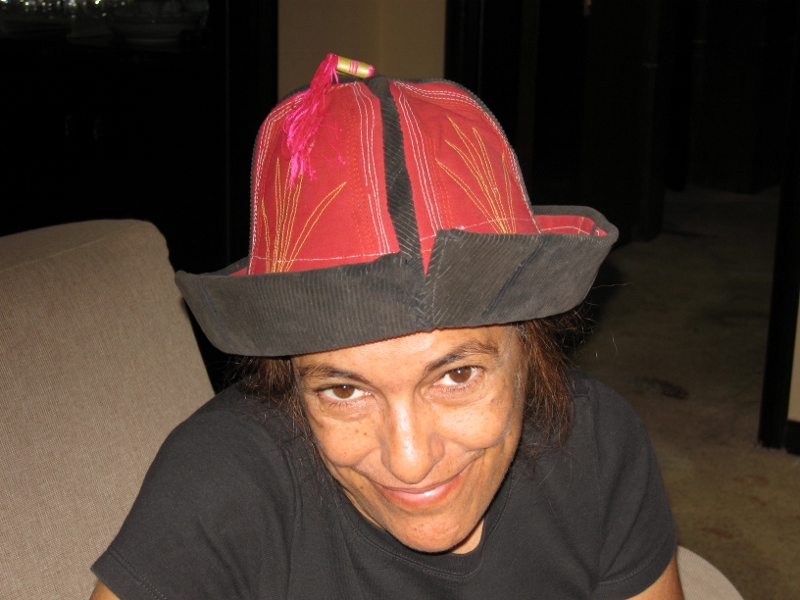 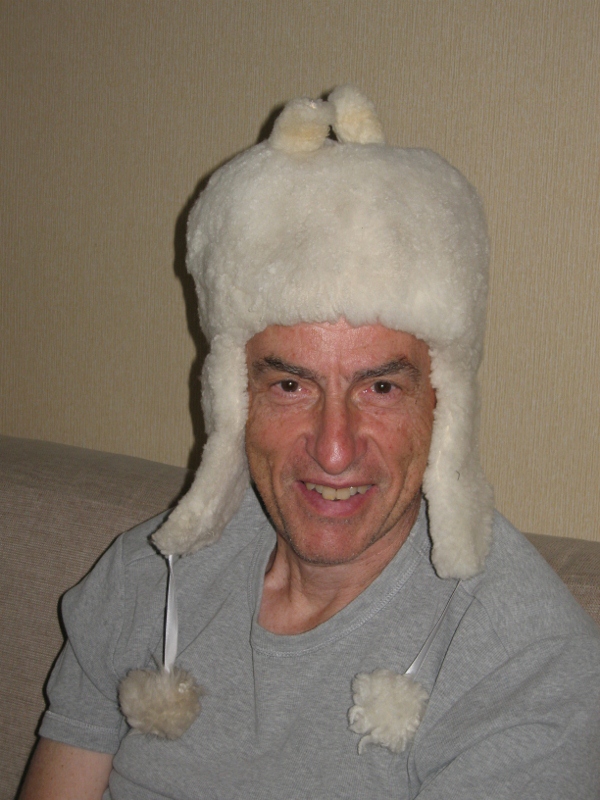 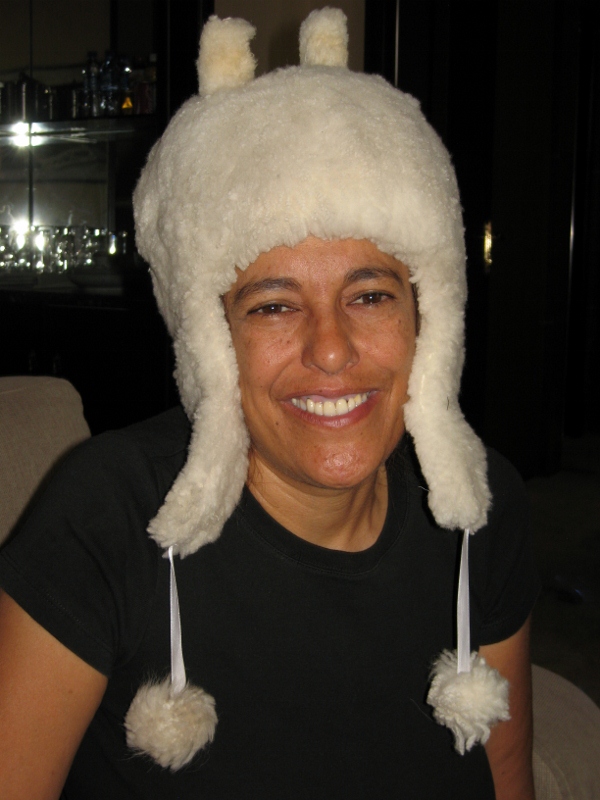 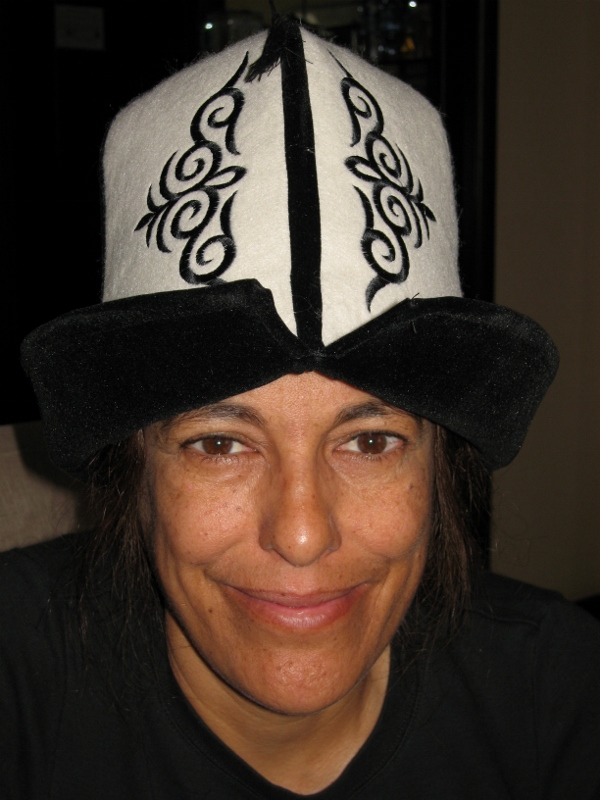 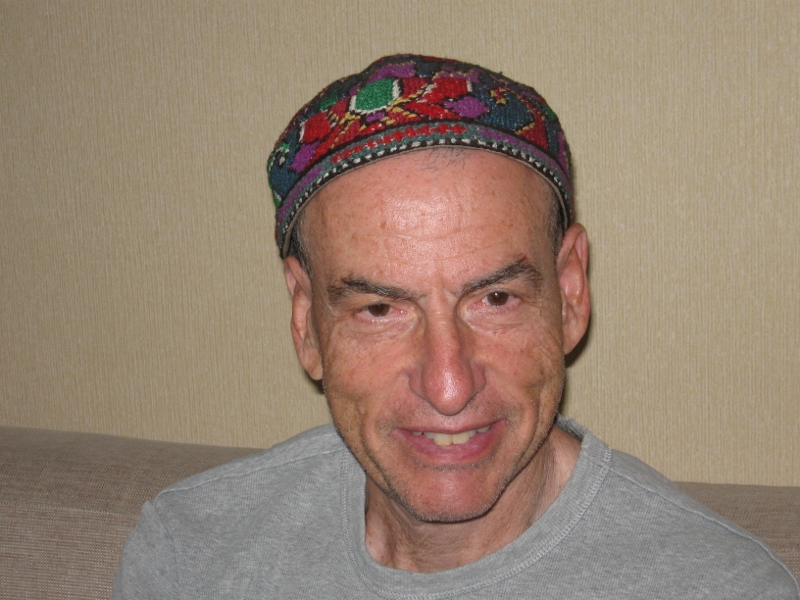 We cycled 62 KM, and arrived in Wushi by 6 PM.
The first thing we did was to go to the bureau police (a different place than the traffic police station and the regular police station.)

A very friendly policemen, copied by hand, what seemed like every page of our passports.
We were told NOT to photograph anything while we were in the area.
I was glad I had taken some photos before we arrived there.

We drove around town looking for a place to eat.
We have not eaten anything beside fruit and bagels, which we bought in a roadside stand.

Lunch was tasty, although it always feels a little strange and disheartening to eat while the cooks and servers are hacking, coughing, spitting….or swatting flies.

After Wushi we loaded the bikes and drove to Kaqi.
The road meander through beautiful small villages, with people of Kyrgyzstan ethnicity.
The men wore white hats with a black inner lining folded upwards.
The women had red cheeks and the elderly women wore headscarves.

There were almost no cars, trucks or buses, only motorbikes, donkeys, horses and bicycles.

The landscape took our breath away….. It felt so idyllic…. Yet we stuck to our promise not to photograph anything.

We arrived in Akqi late and looked for a place to stay.
We had zero expectations, because small town do not have good hotels, and indeed our hotel have seen better days….
But the best suite in the place did have a king size bed with good clean white sheets and a nice comforter.
The shower was nothing to write home about…. But we managed two quick showers and walked into town.

I wanted to buy for Jules, who loves hats, one of these super cool looking Kyrgis hats.
The town in tiny, with one main road and a small amount of side market streets.

We asked around town and mimicked with our hands a hat.
We learnt that a hat is called “Mouaza” in Chinese.
But all the hats they showed us, were regular hats, and not the traditional cool ones.
Funnily enough, even though so many men wore these hats, just when we were looking to buy one, no one was wearing them, so we could not point to the correct kind of hat and explain.

A young girl, about eight years old, with blue eyes and very dirty cloths, understood what we wanted and she gave us the word for it.
Apparently we were looking for a “Kalpak.”

By now, a group of ten kids gathered around us and about five adult.
One very kind and helpful man, spoke a small amount of English.

We’ve collected an “entourage”, which followed us, trying to be helpful, as we walked around the town.
By consensus, it was agreed that there was a store selling “Kalpakas” on the second floor of a dilapidated building, but it was closed now.

China, despite its huge size, does not have time zones, which means that North-Western places like Xinjiang Province, have the same time zone as the east coast of China.
Here, by 9PM, you can still wear your sunglasses.

Anyway….. We climbed to the second floor of the building, and there was a mobile phone number written on the closed door.
One of the adults called the owner, and regardless of the late hour, informed her that there were two “important” people from “Megua” (America), who came to buy hats, and that she must come.

She arrived dressed in high hills and a perfect dress, within fifteen minutes.
The store had dressy hats and clothing, for special occasions.
But we knew that with all this production, and getting her out of her home and back to the store so late, we must buy two hats.
We bought one for me and a lovely one for Jules.

As a ‘thank you’ to everyone around, we bought some sneaker bars from a closed cabinet that she kept, (apparently they were considered to be a luxury item in this remote village), and gave them as gifts to the helpful kids.

Back on the street, we strolled around town to look for places to eat and observe the people, when a police van pulled by us and two policemen asked in Chinese, for our passports.

They pointed to their van and asked us to come with them to the police station to register.
We got into the van.
In the back seat of the van was a naked drunk man, mumbling in drunken Chinese.

They drove us to the station, where we were welcomed to a room with bank beds.
We were kindly told to seat down, as this will take awhile….

Out passports were copied from front to back, and a non uniform policeman, tried to communicate to us, that we are not suppose to stay in this town.

It was time to call Jason.
I handed the policeman the phone and they talked.
Within moments, Jason was there, politely pleading on our behalf.

Akqi, is a sensitive closed area, where no foreigners are allowed to visit, we were told.
They called for the higher officers, to come.
She was a uniformed officer with kind eyes and a warm smile.

They said that it was NOT personal, but the border area is sensitive, and they requested that we leave TONIGHT.

I pointed to the clock, hanging above the door, showing that it was closed to midnight by now…..and I asked Jason to plead and to ask if we can stay overnight in the hotel that we already checked into, if we promise to leave first thing in the morning….. Even as early as 7 am….. Before breakfast….

Jason was charming and diplomatic….
He told them we are NOT journalists, but that I am just an artist.
He asked me to show them photos of my art on my iPad.

The policeman loved my art, said that he also loves to draw and allowed us to stay for the night.

We exchanged a million thanks, shook hands and were given a ride to the door of our hotel.
We breathed a deep breath of relief, although I have to admit that I had a strong sense that we will not be forced to drive out of town at midnight, because the nearest town was 300 KM away, and they seemed so kind to us…..they even offered us food and drink (which we refused).

We thanked Jason and went to bed.
We slept well that night, in this quiet friendly town.