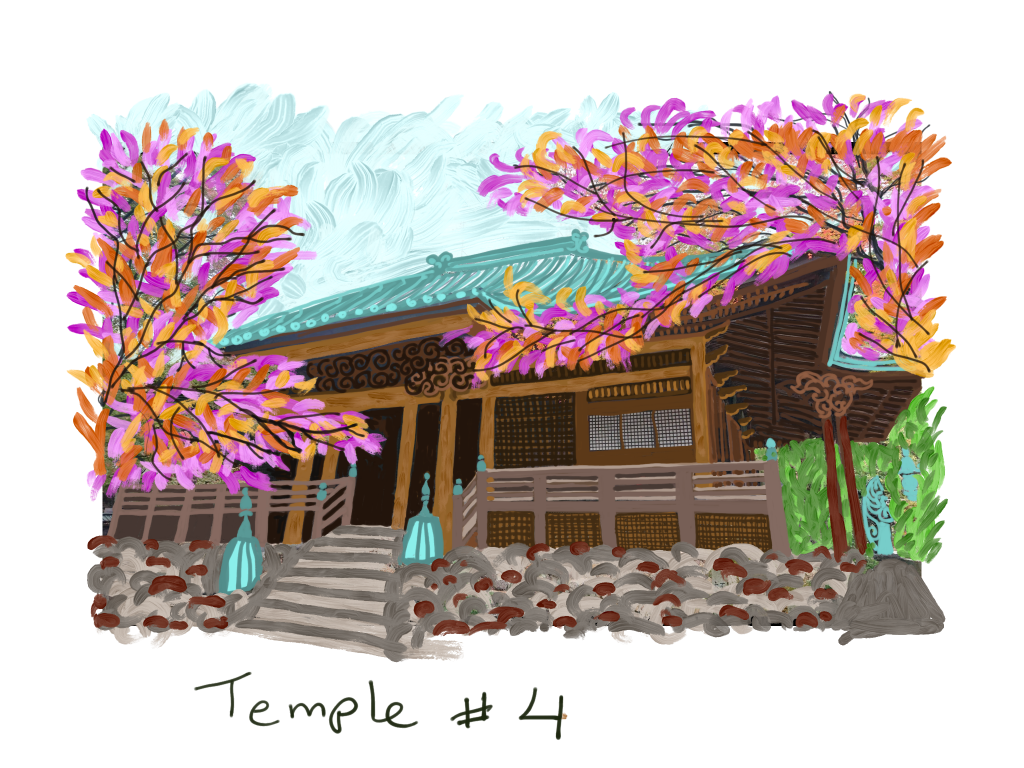 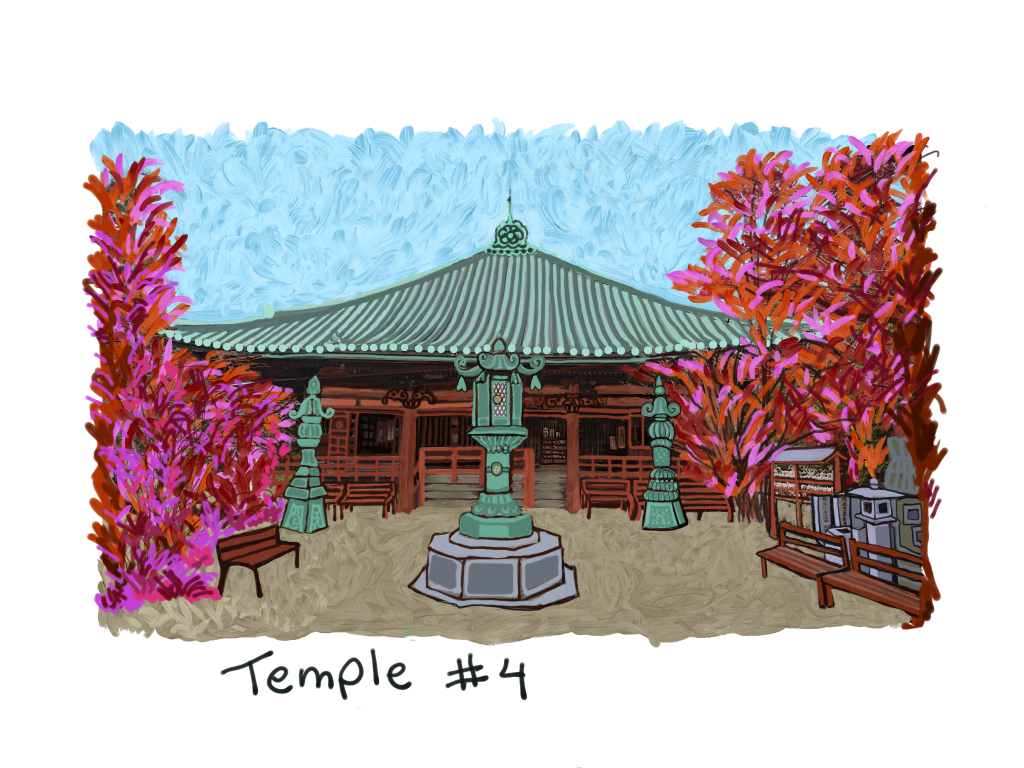 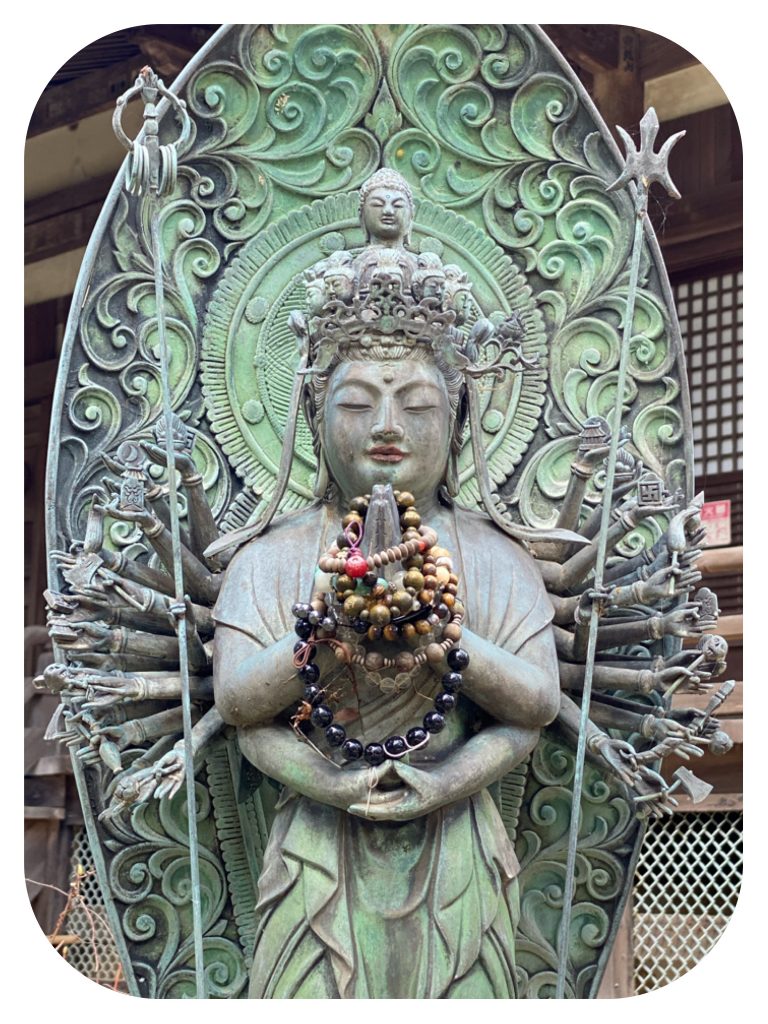 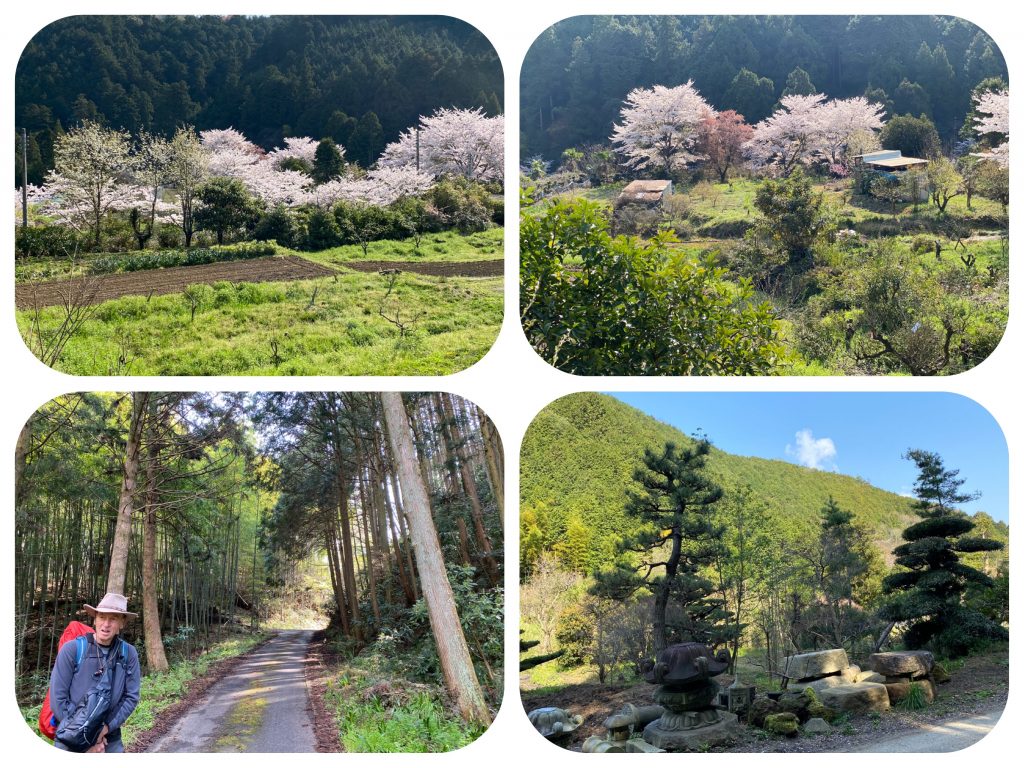 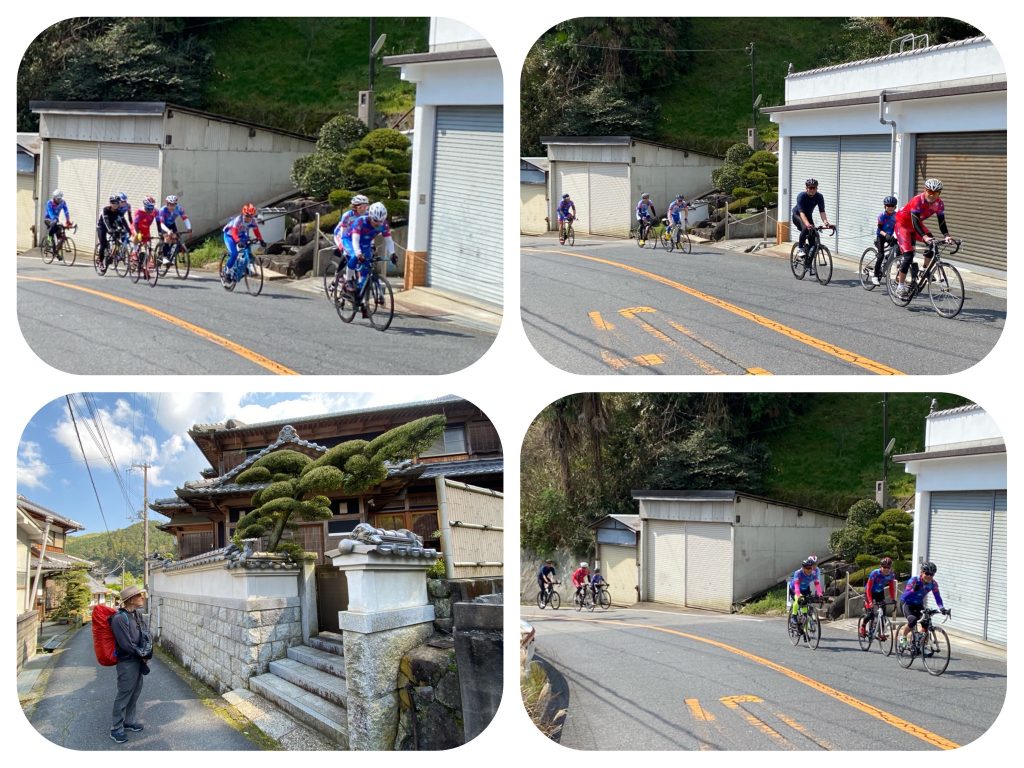 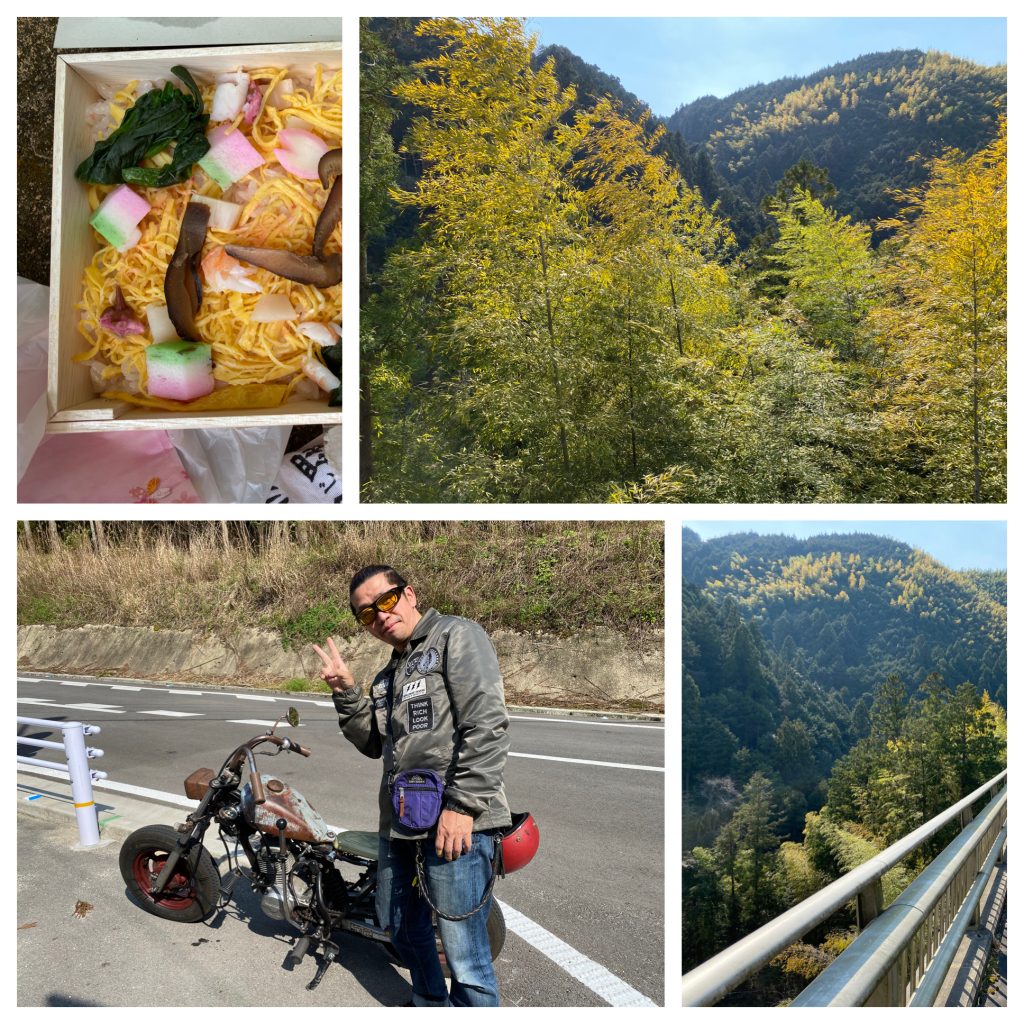 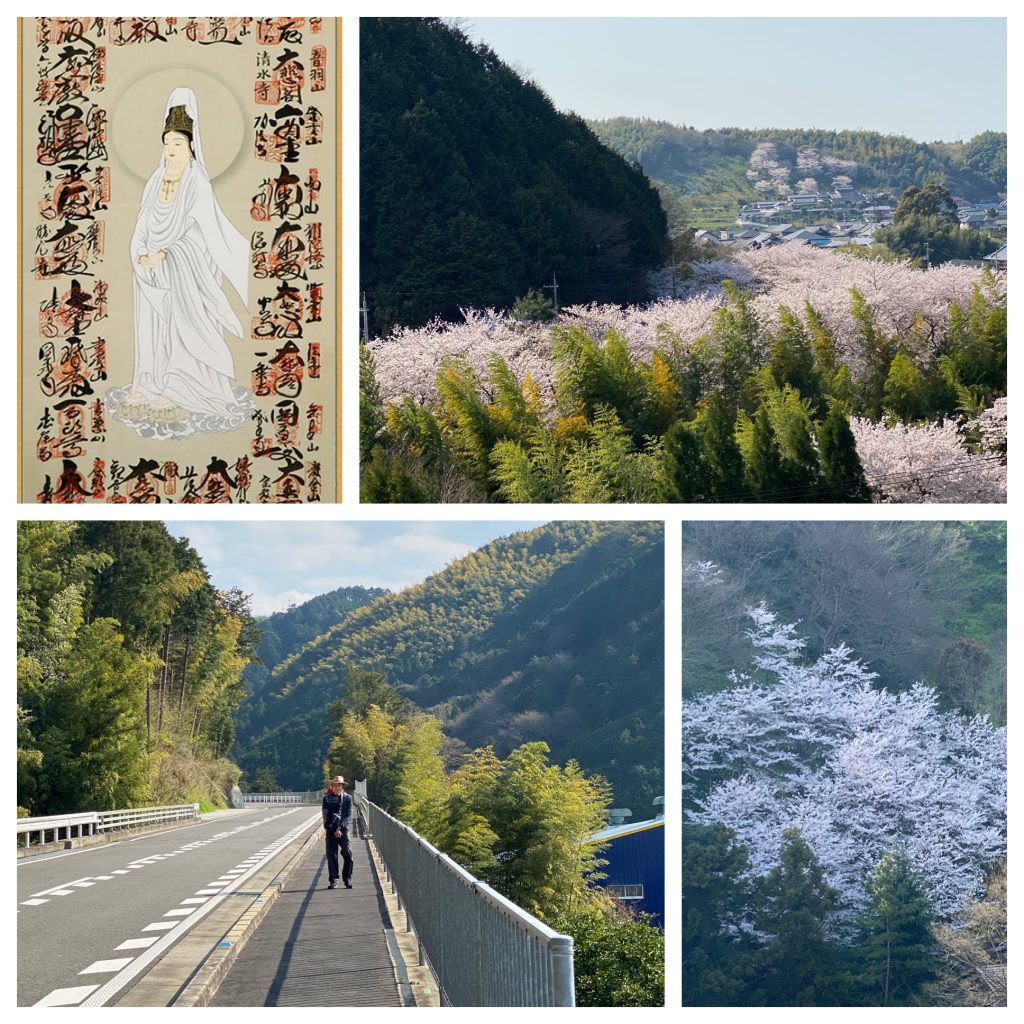 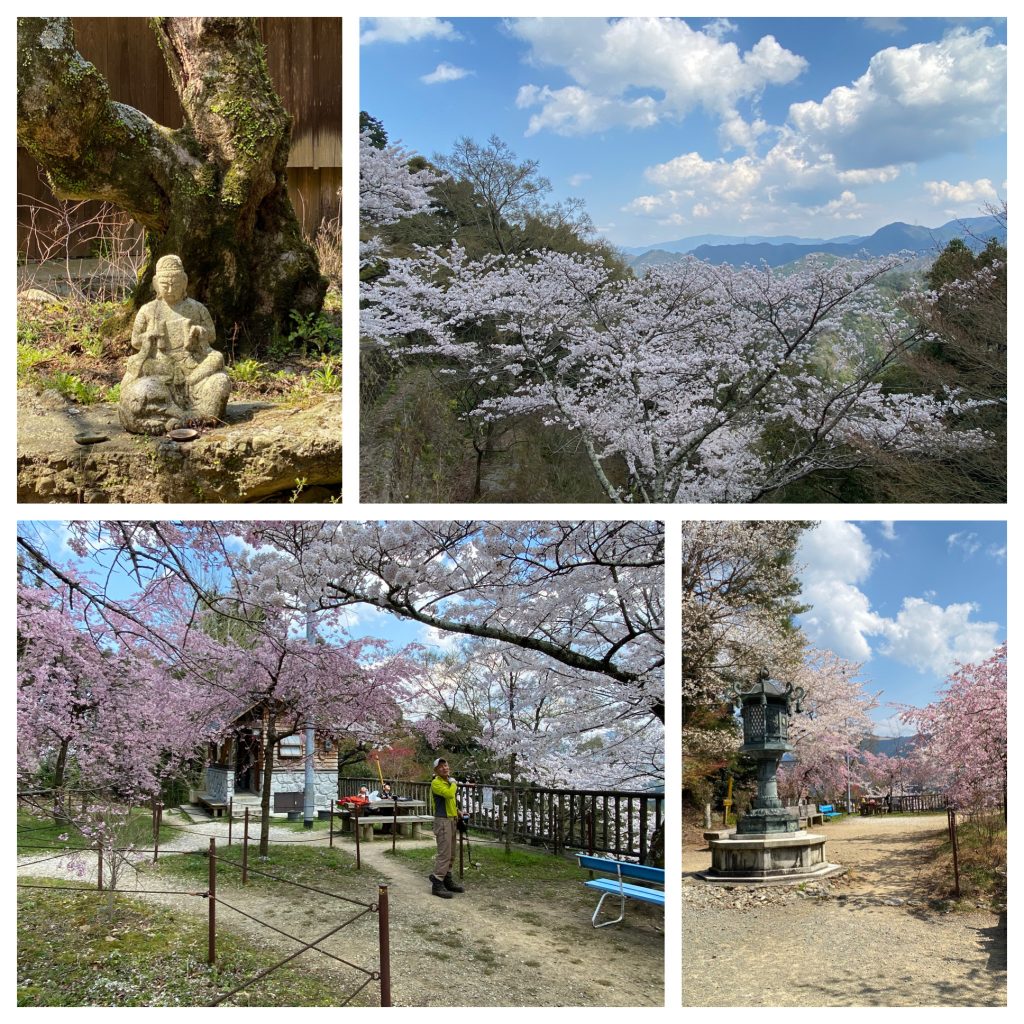 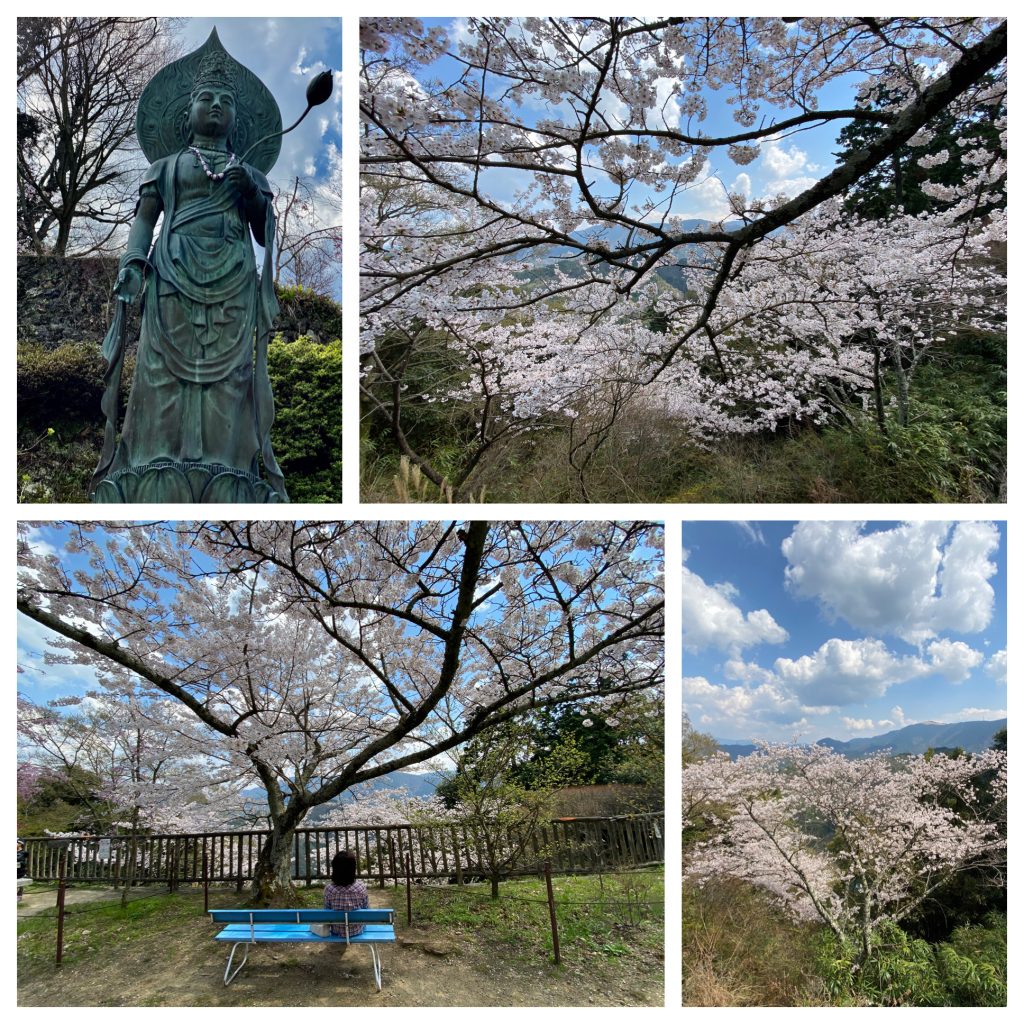 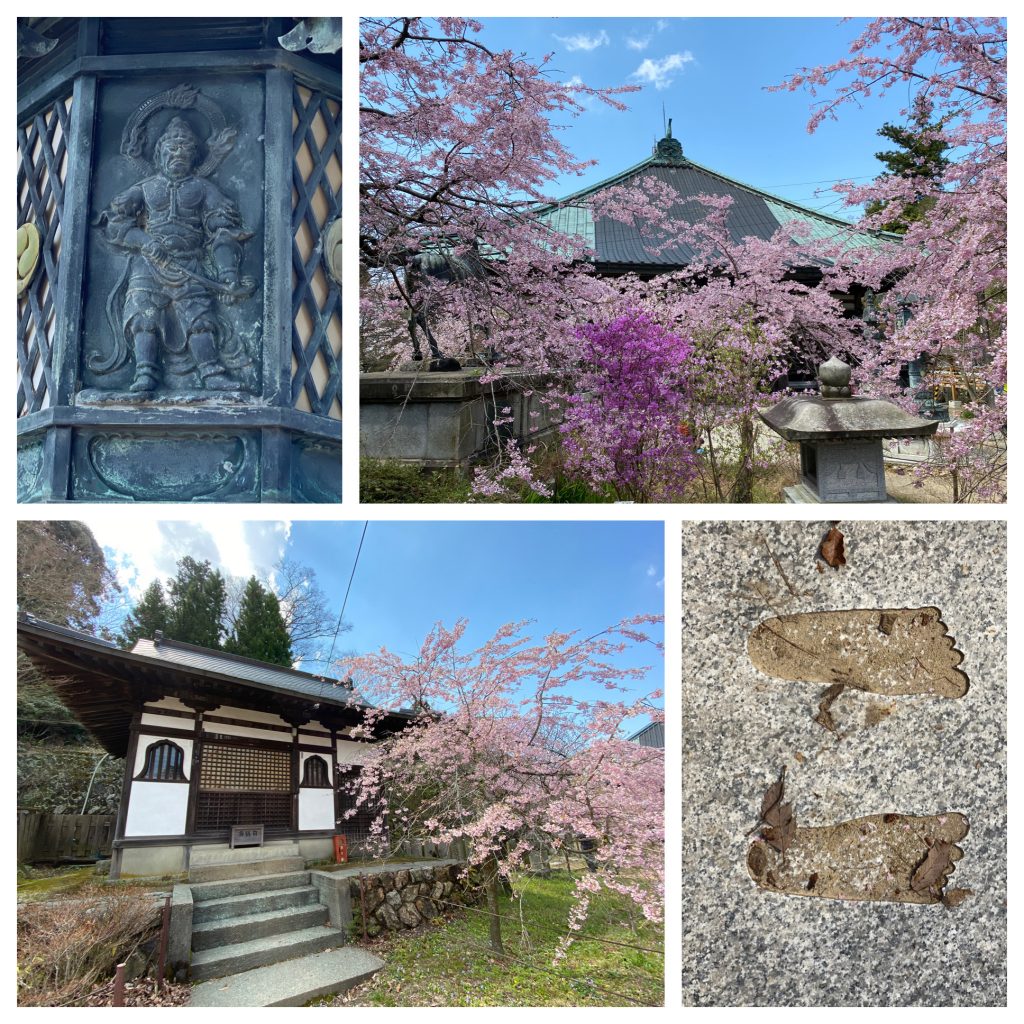 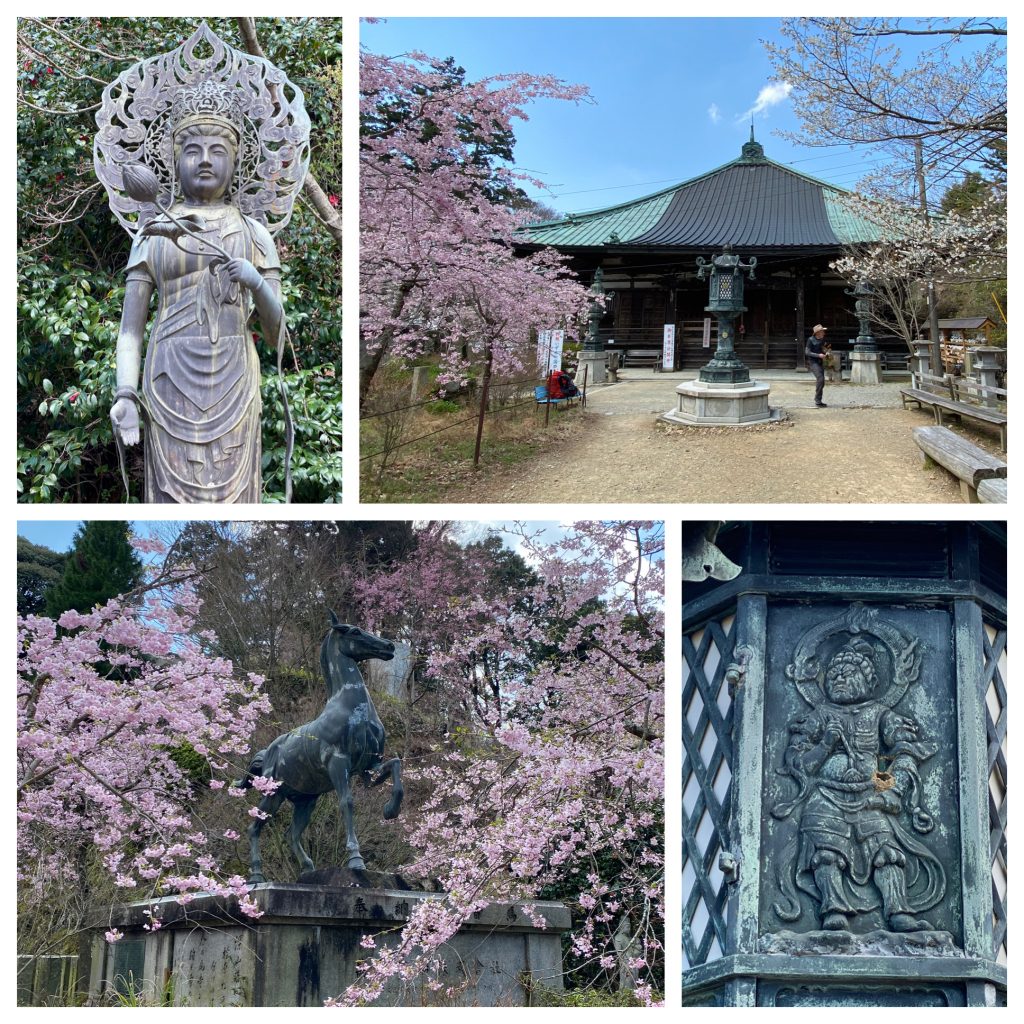 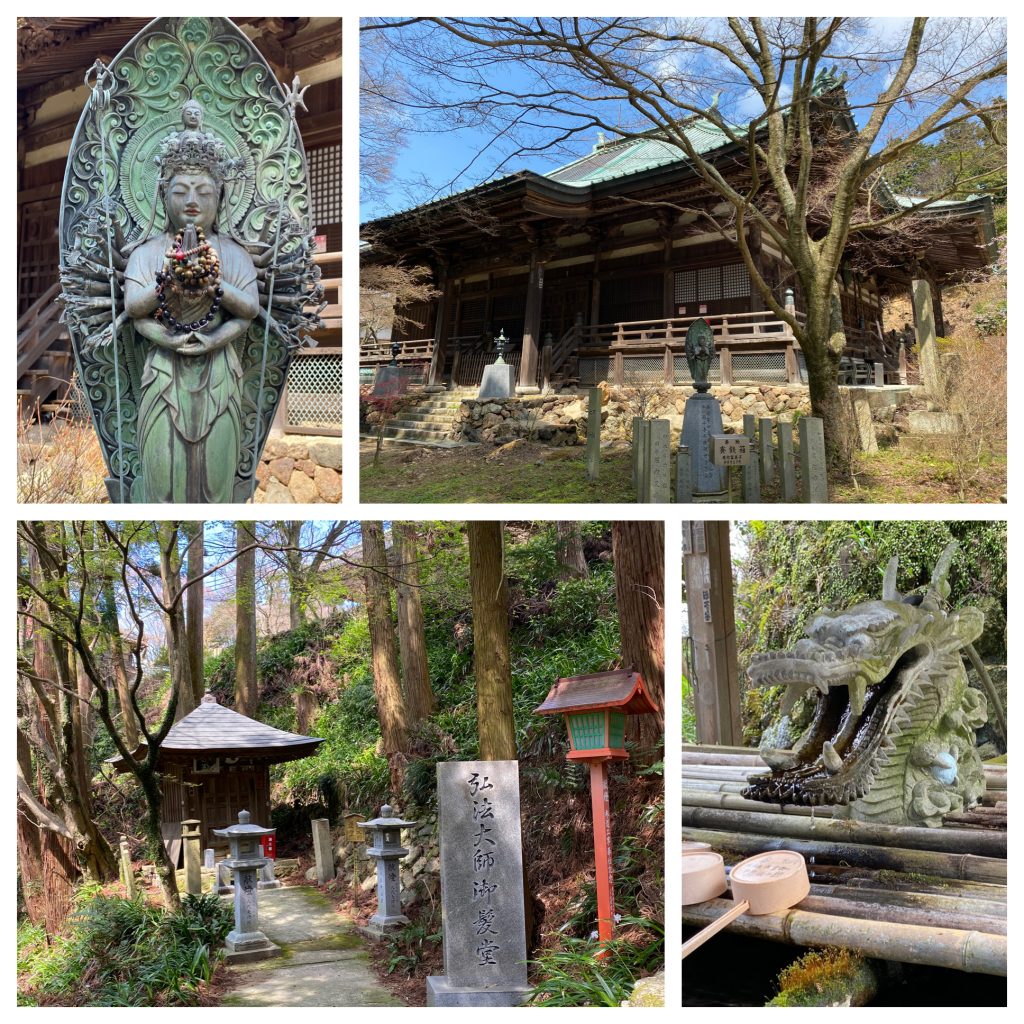 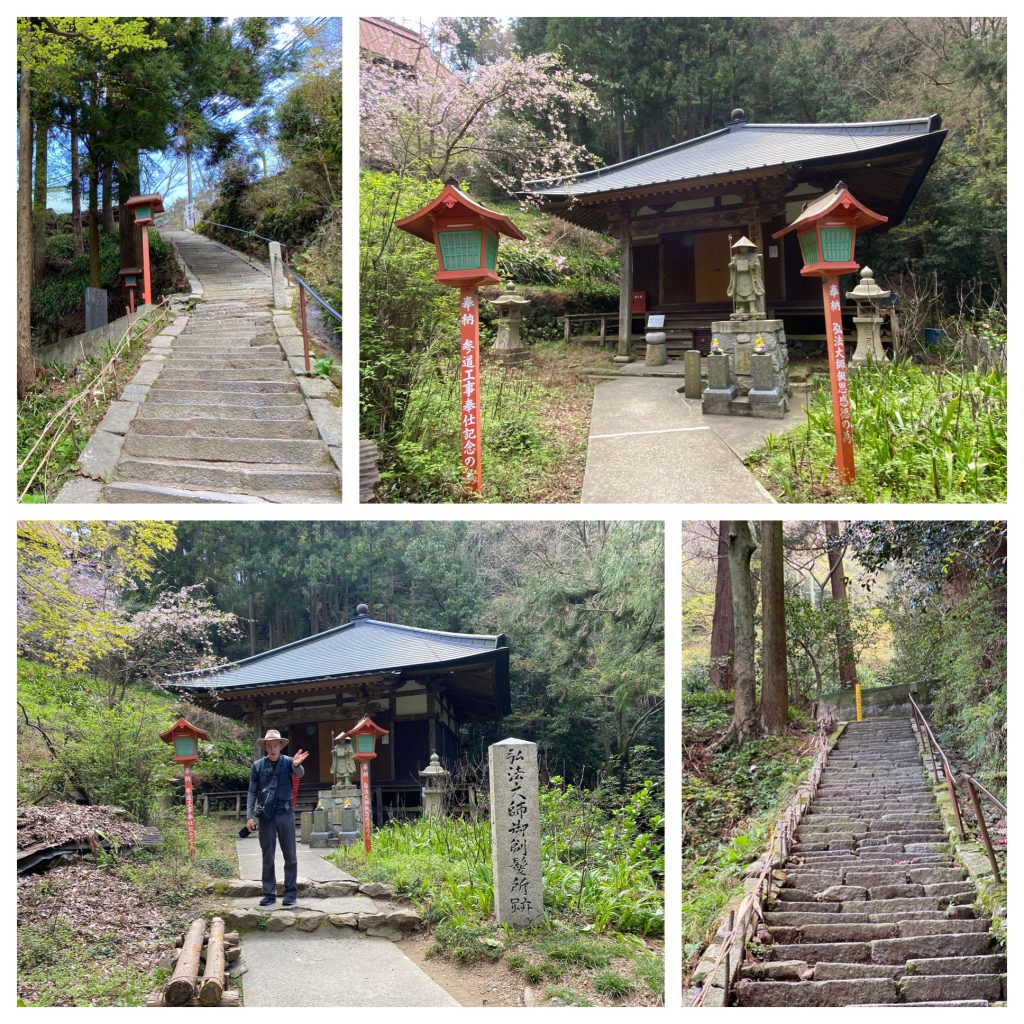 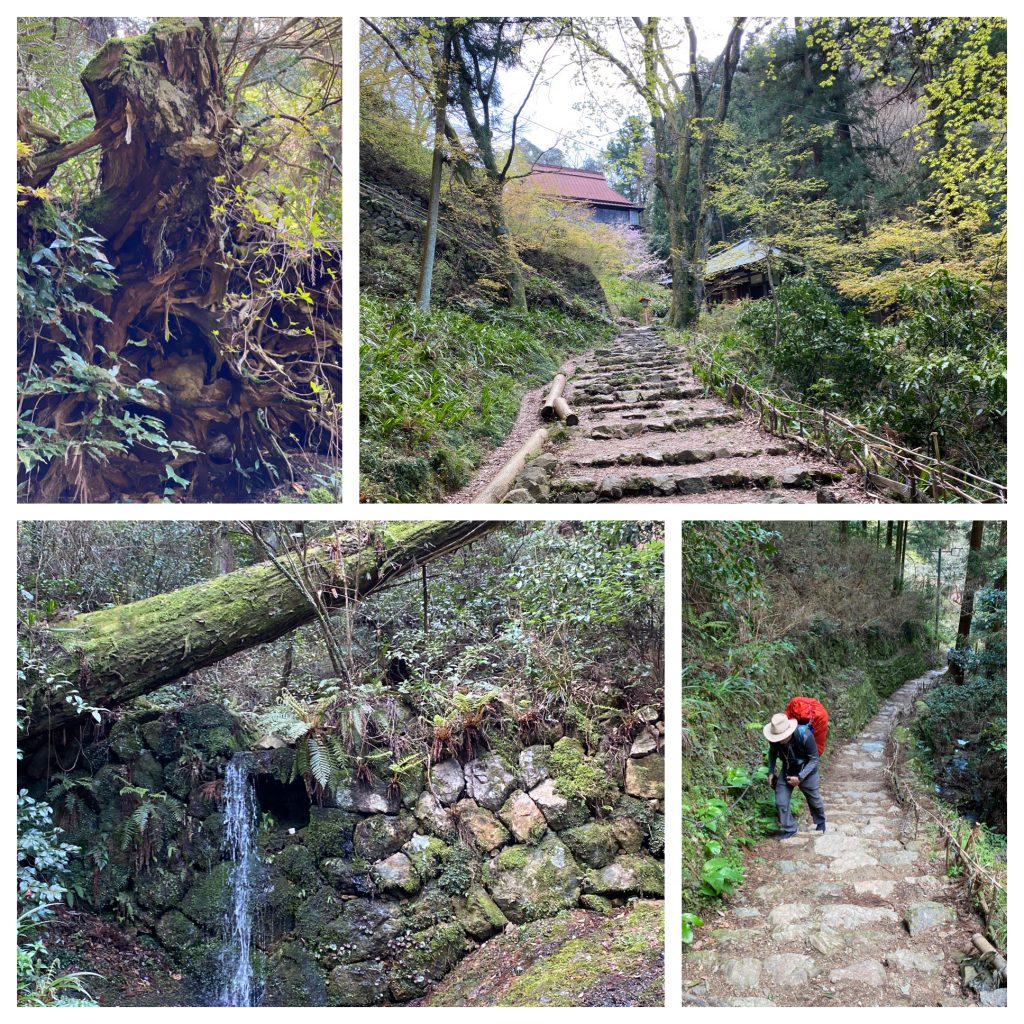 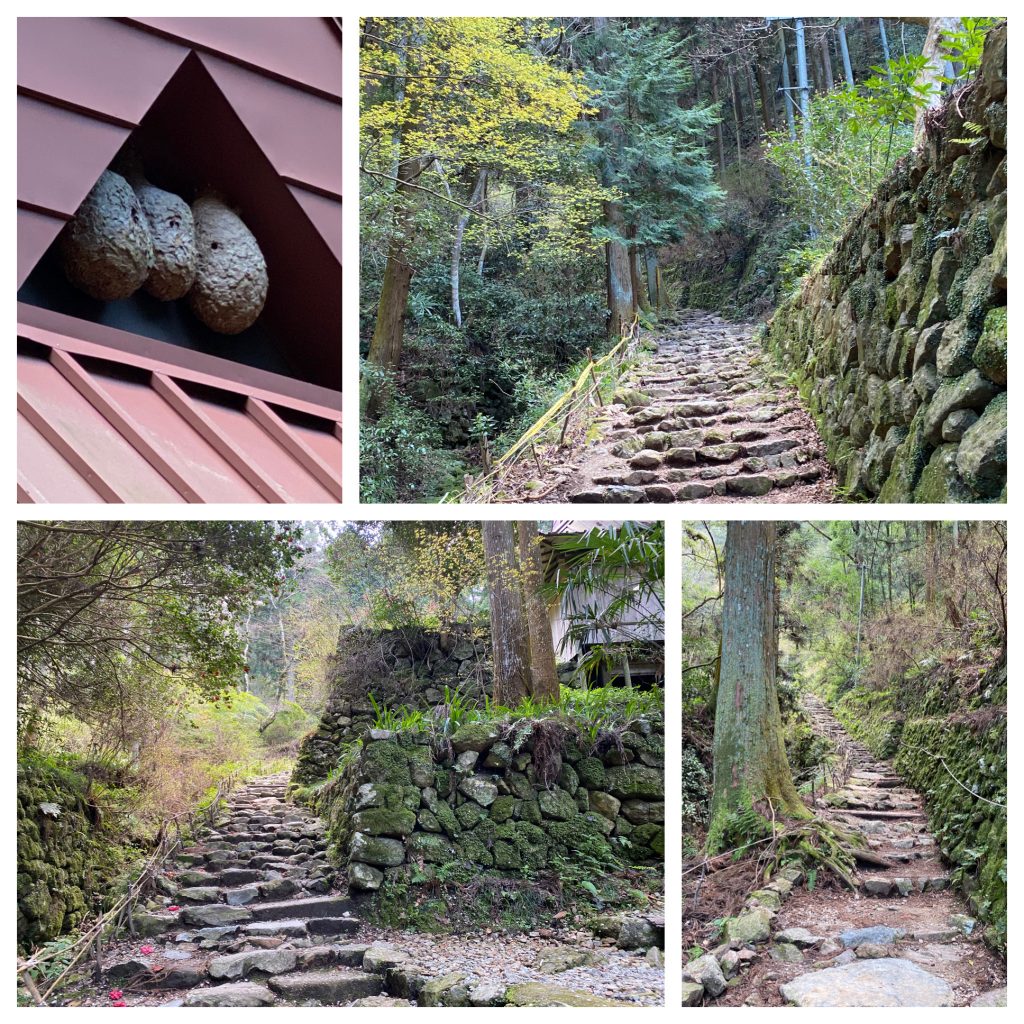 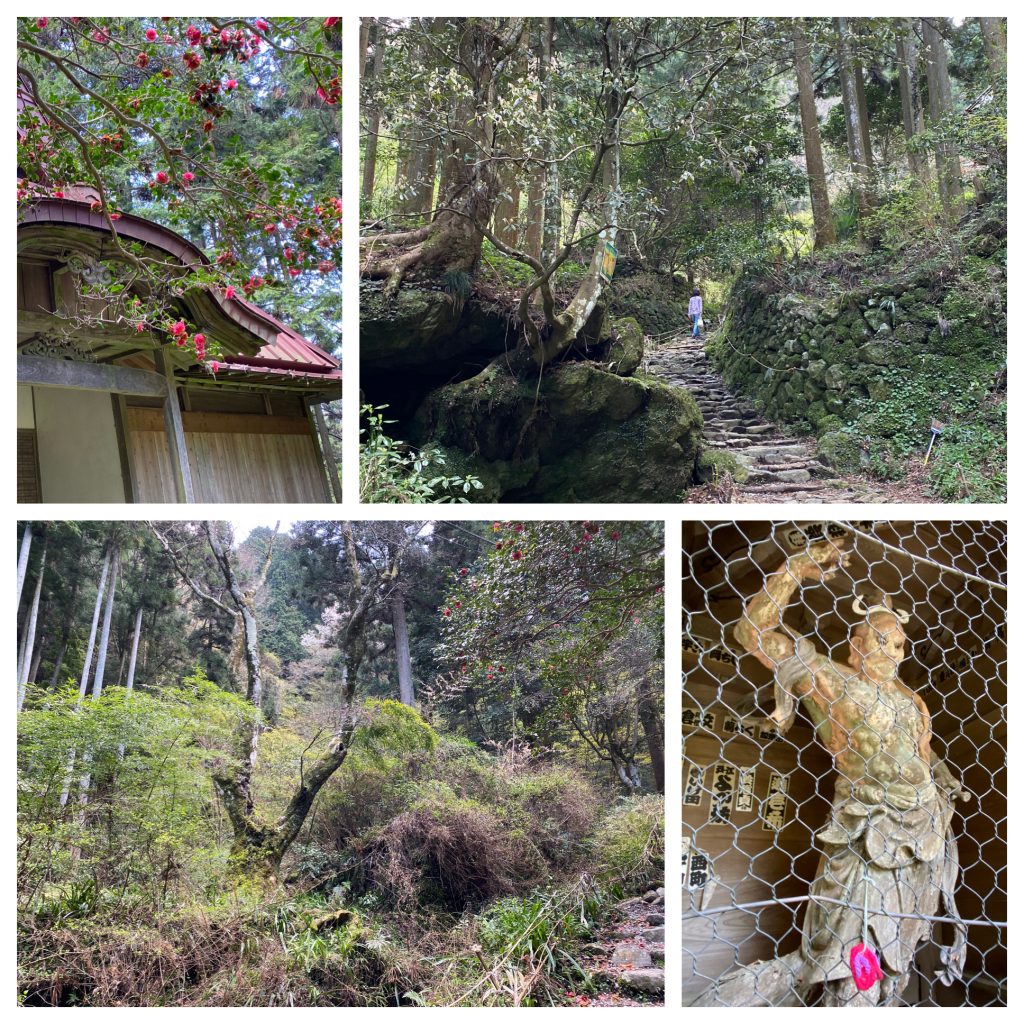 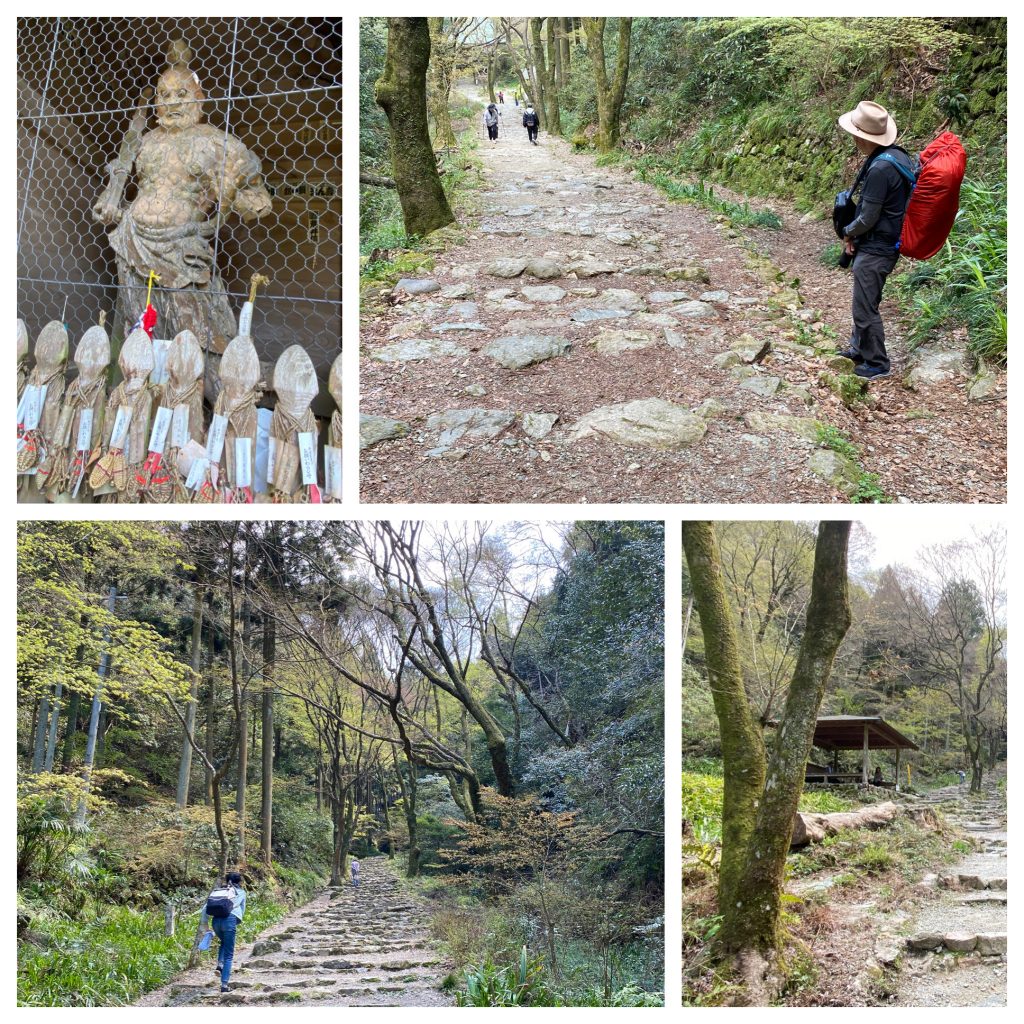 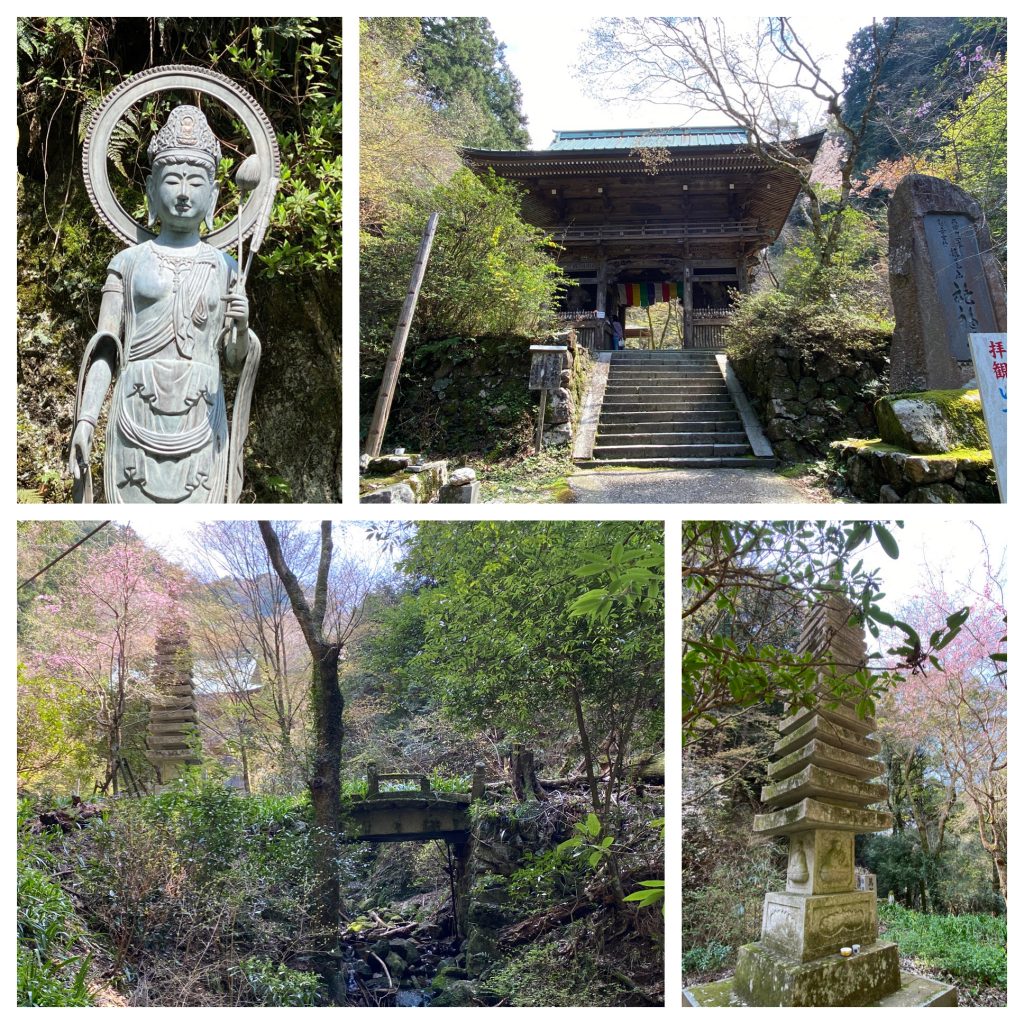 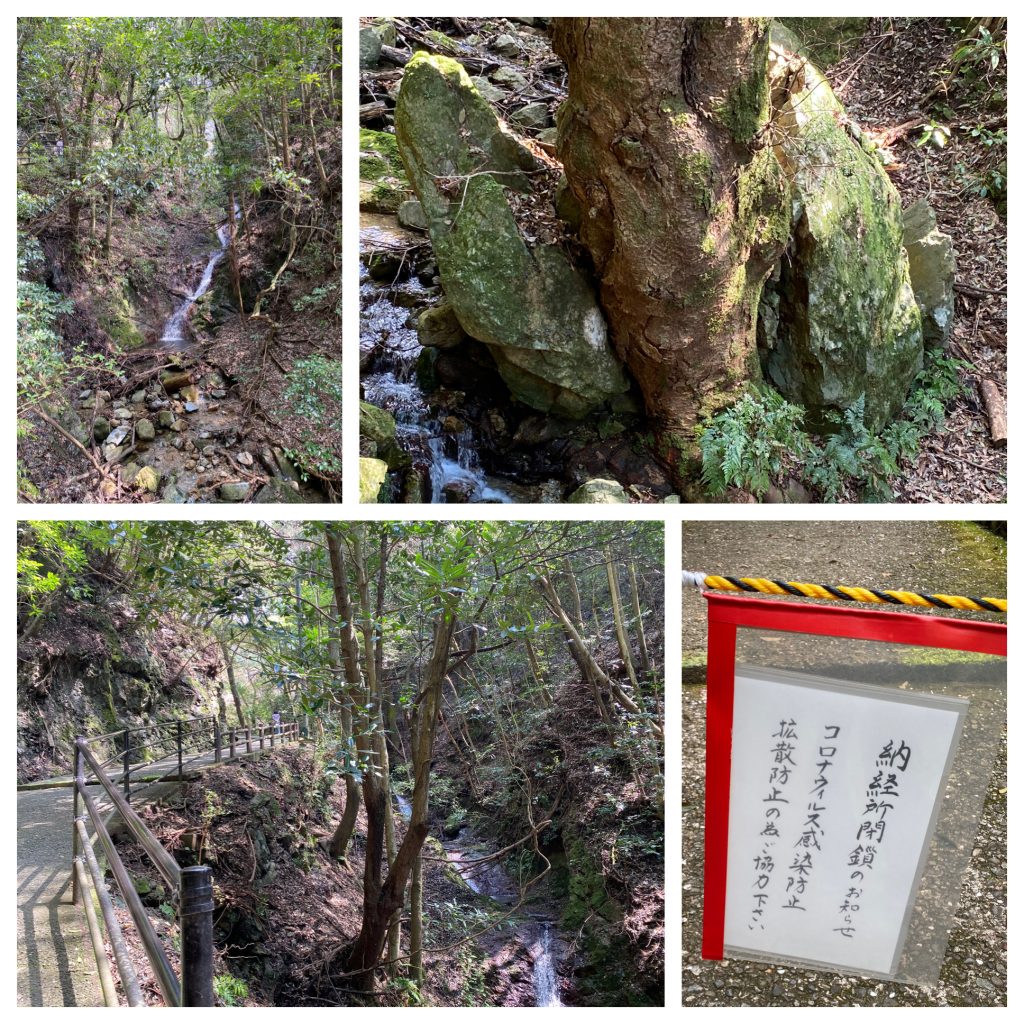 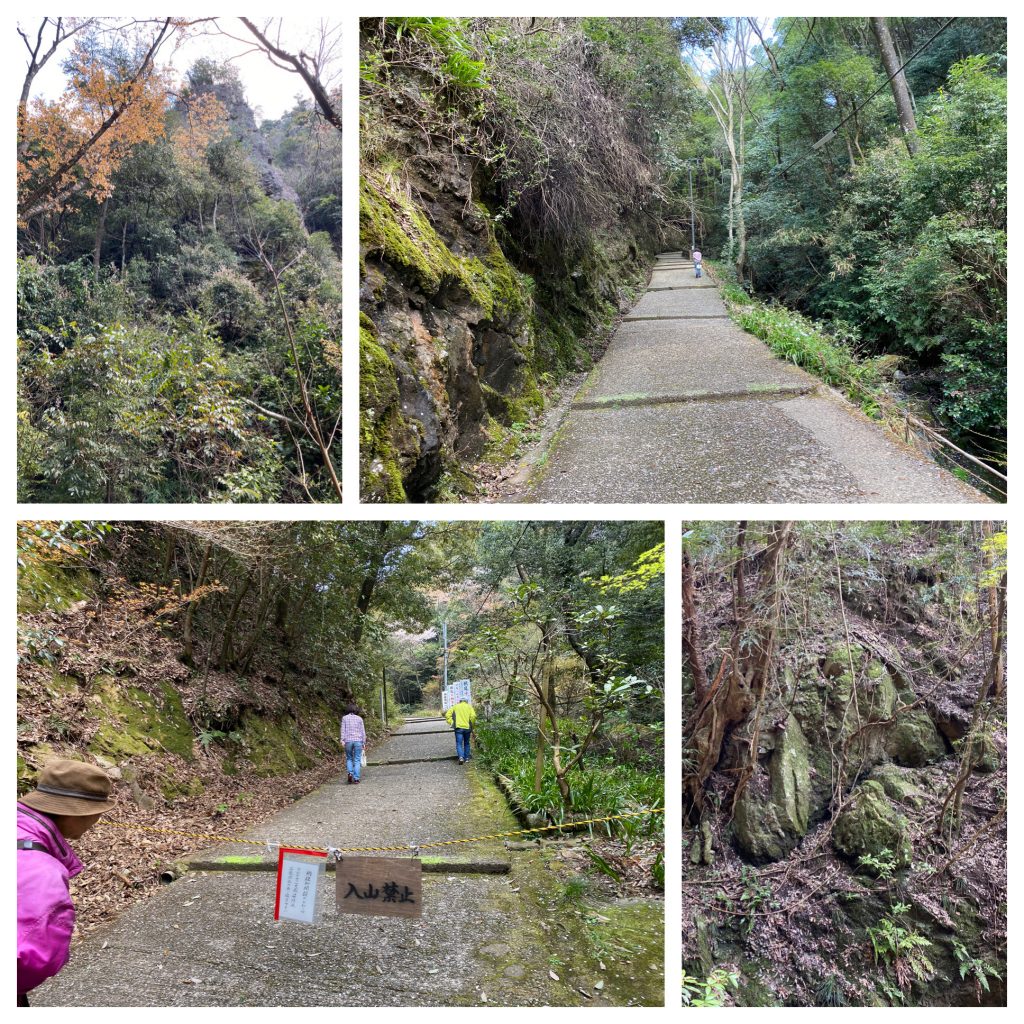 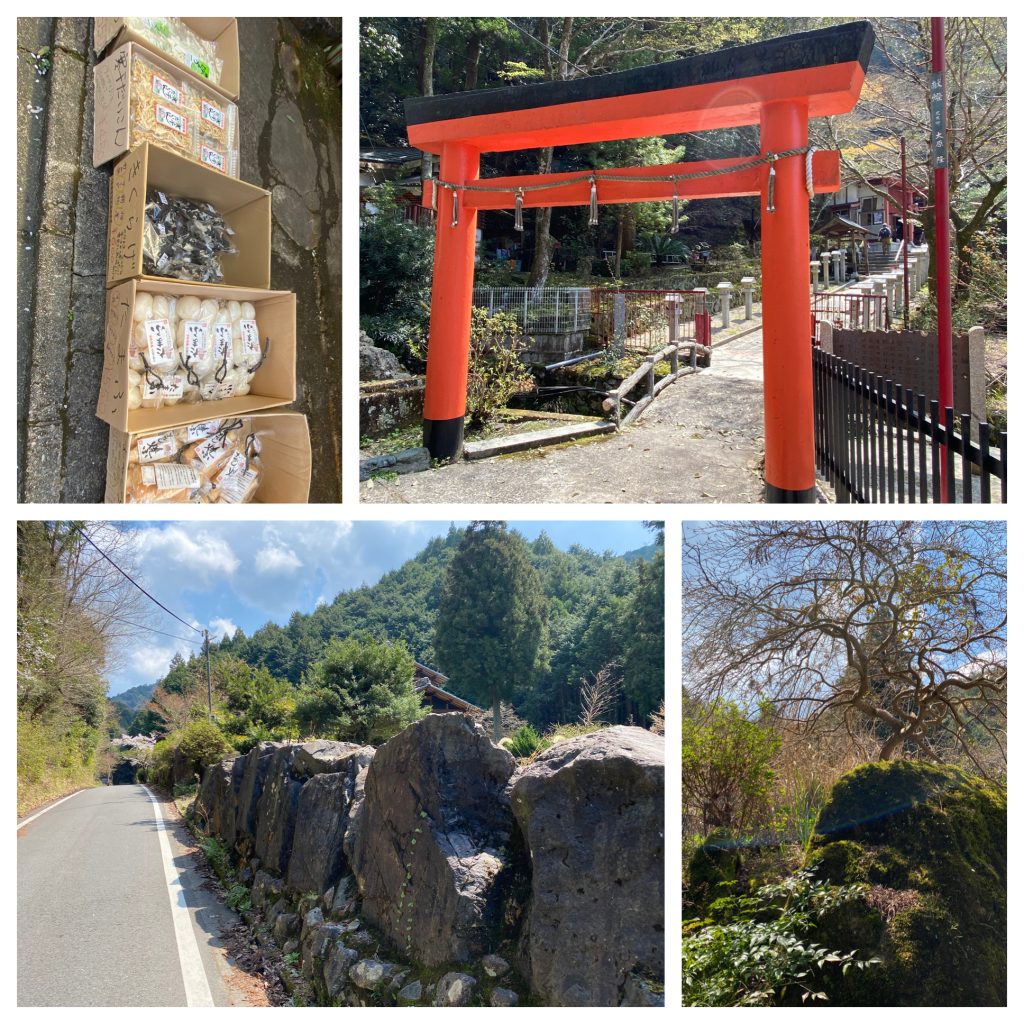 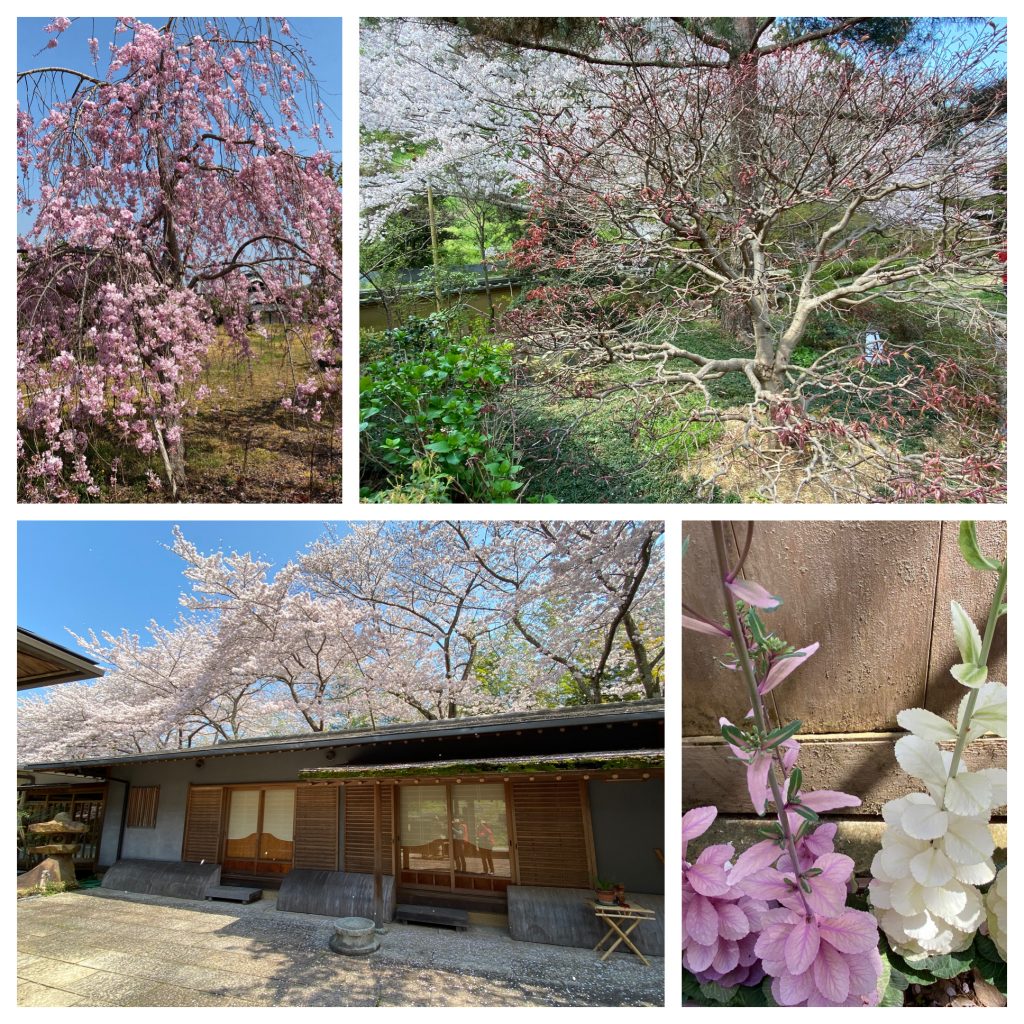 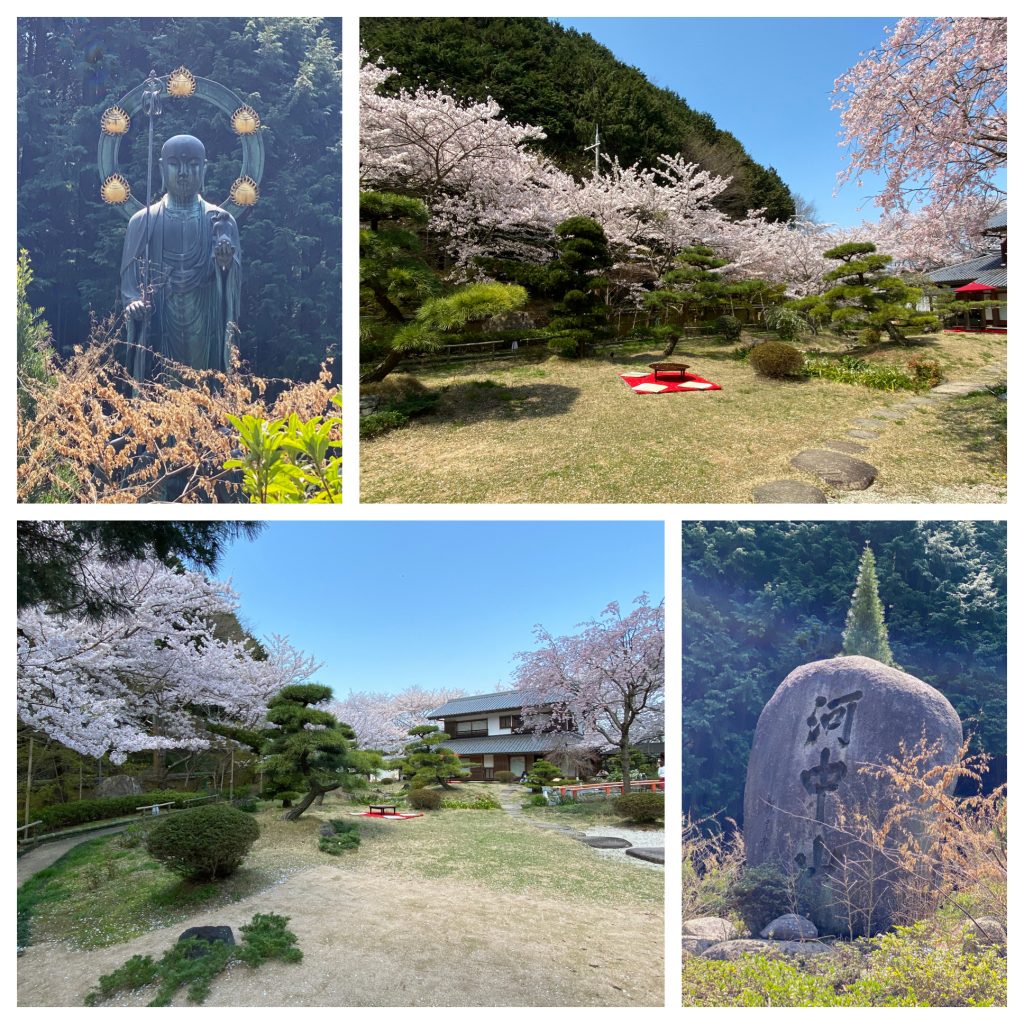 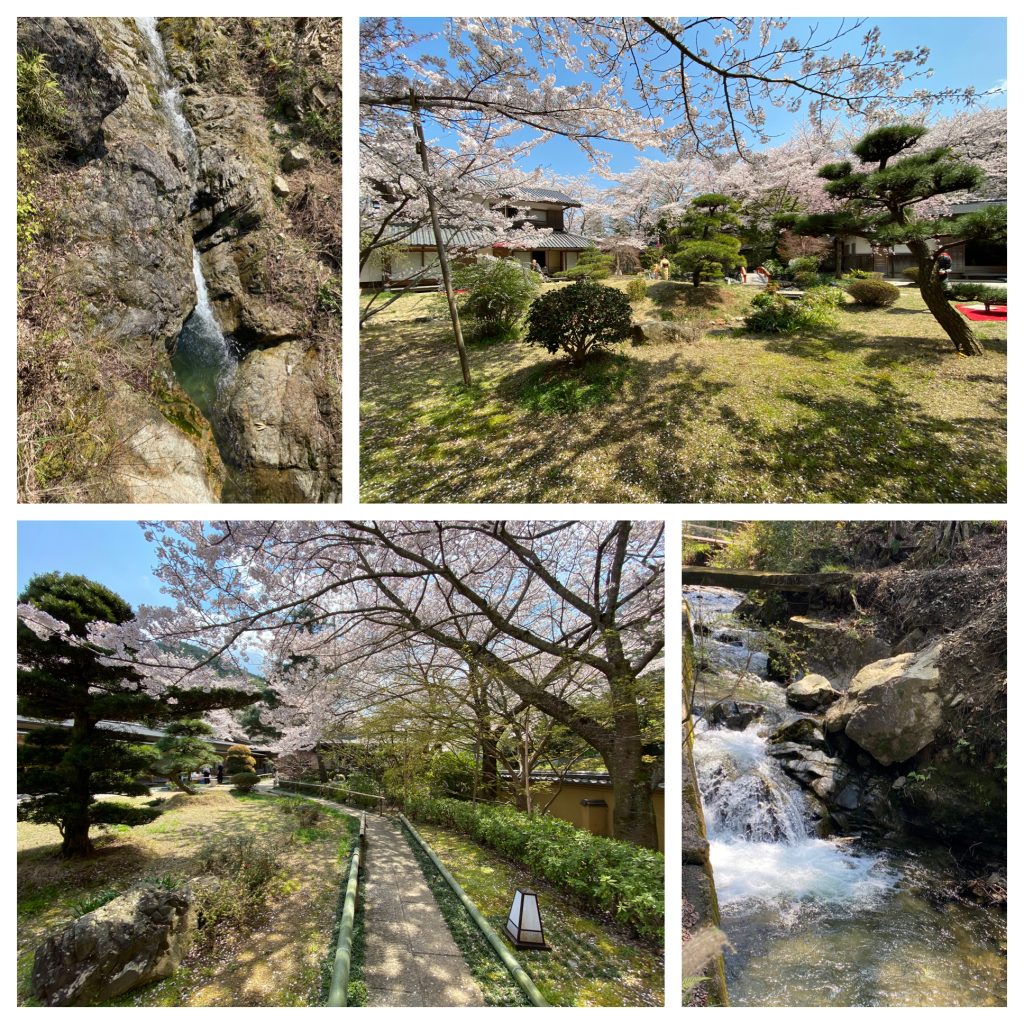 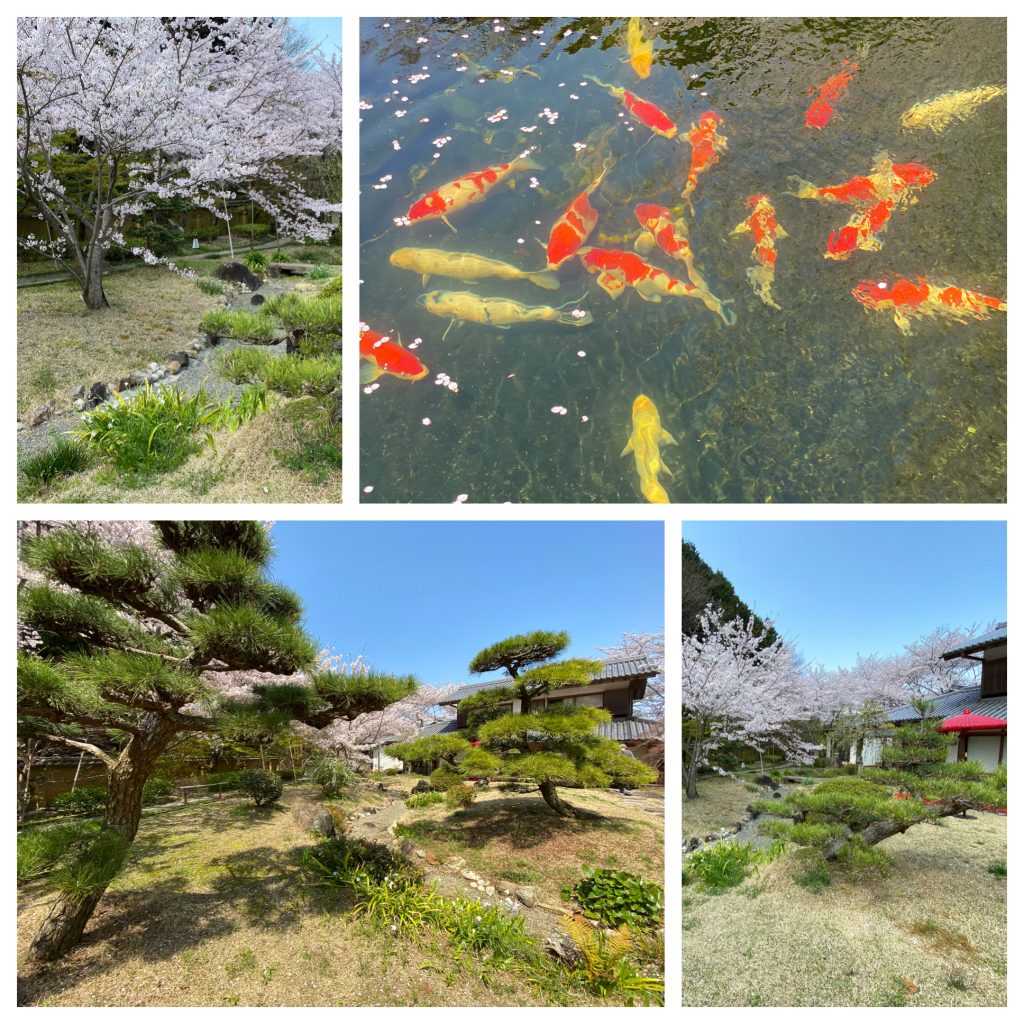 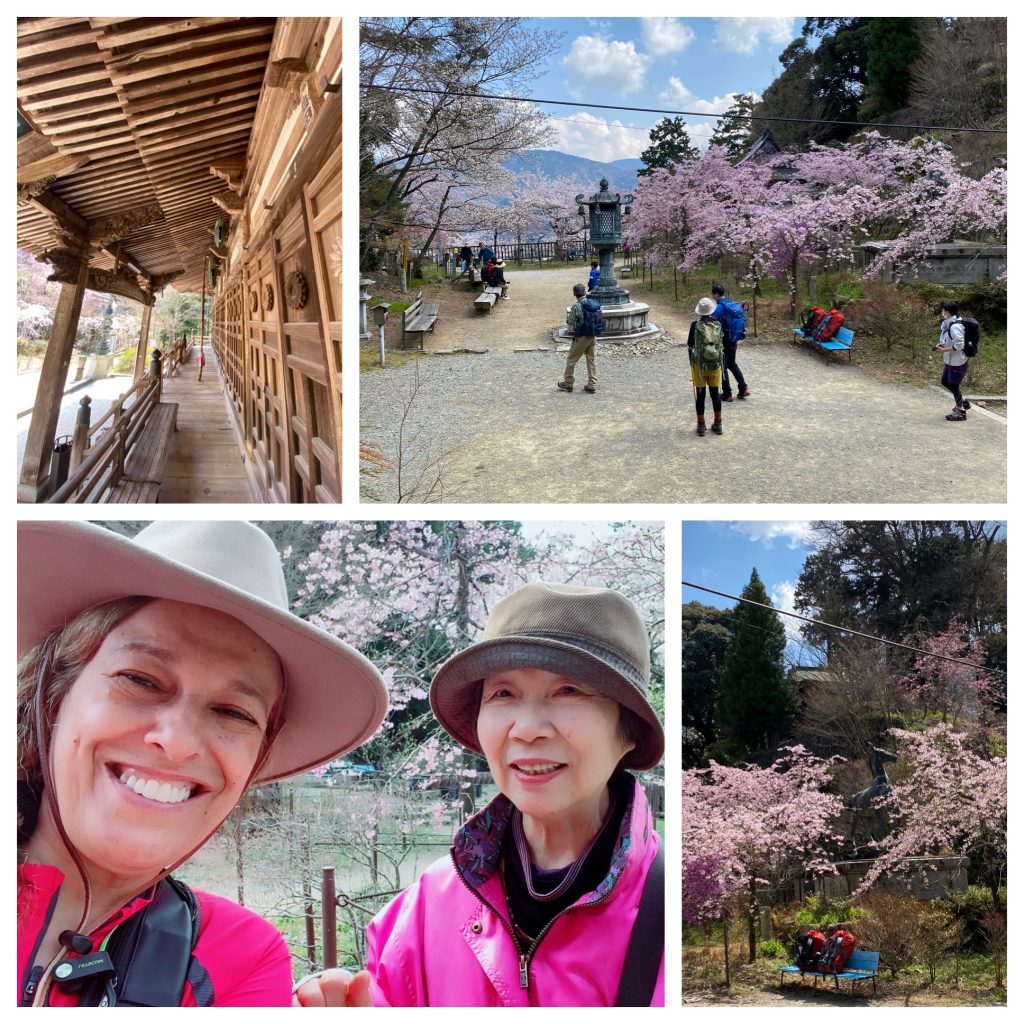 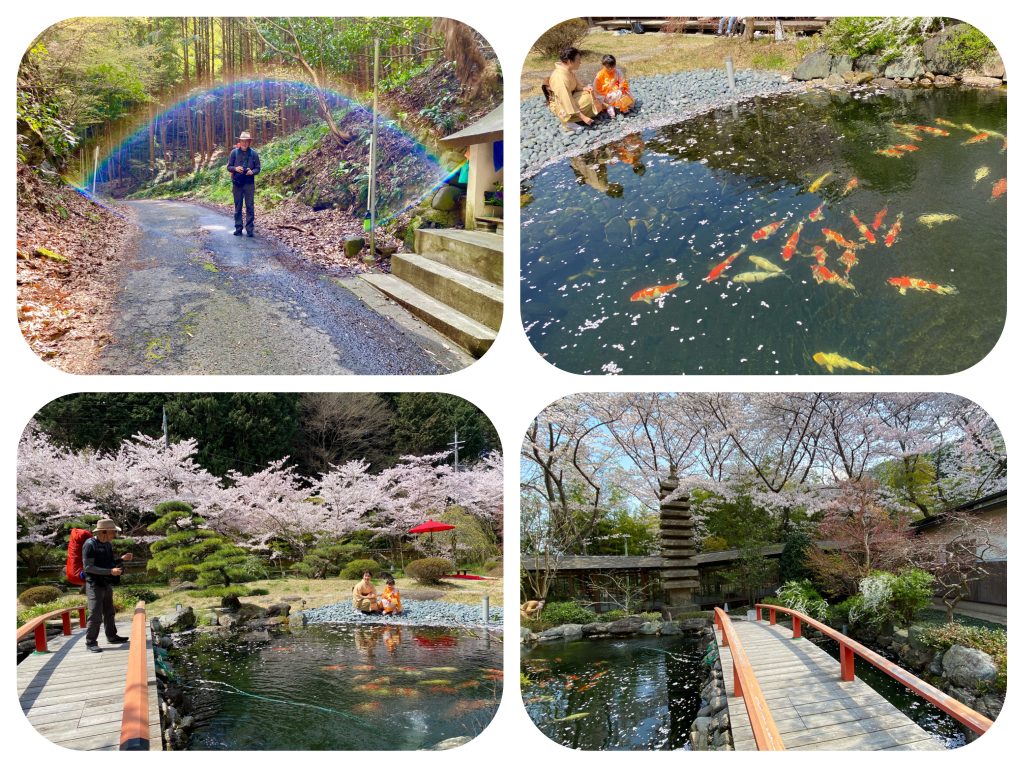 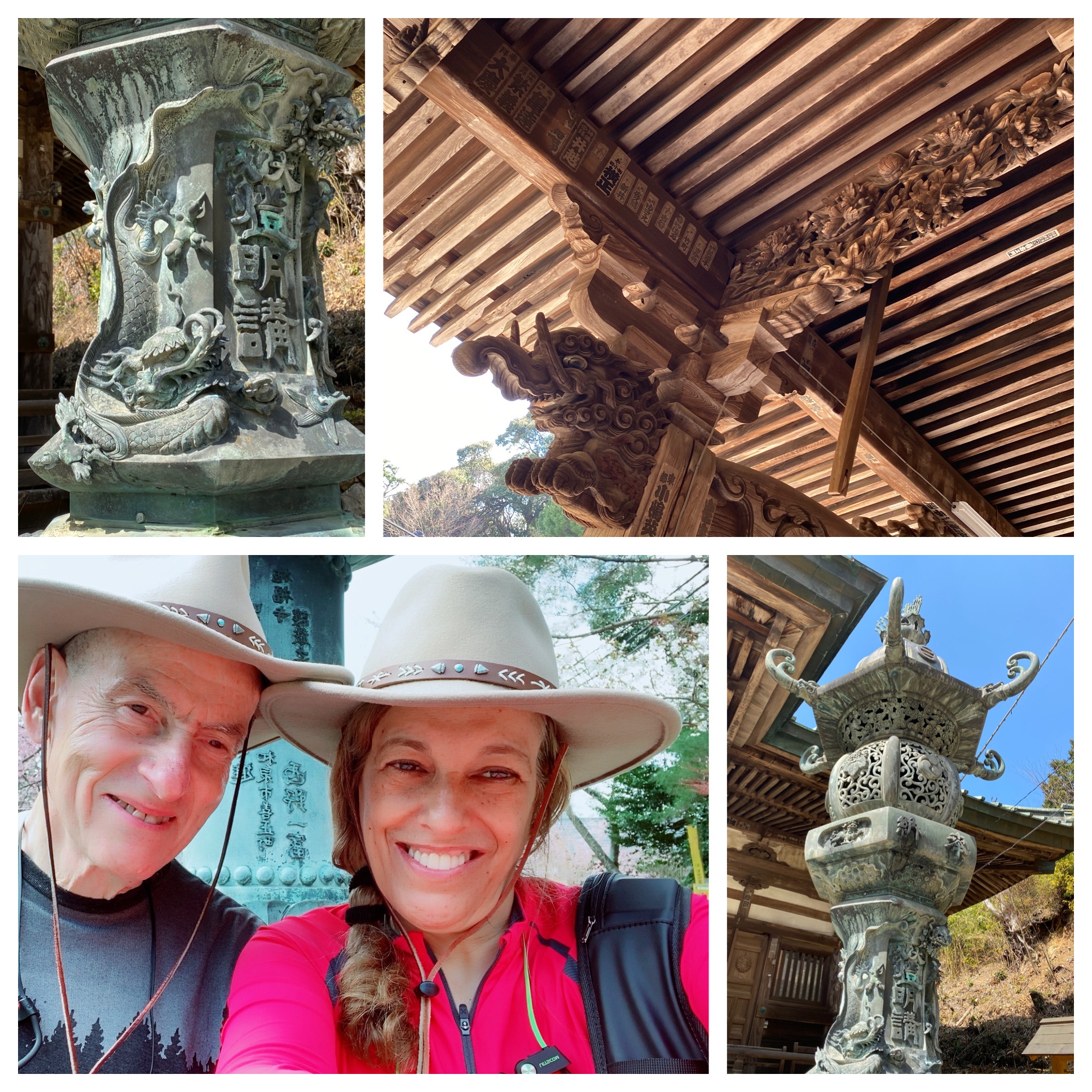 Today was a long day of climbing up Mount Makio-San, where Sefukuji, Temple #4, one of the most remote and hard to access temples of the entire Saigoku pilgrimage, is located.

We had to start walking early in order to get there, and then to continue walking from there to our hotel in Izumi-chou.
In the morning when I woke up, I was still feeling tired from the last two days of climbing, so I decided to go to the hot springs for an early morning soak.

I washed my body thoroughly and sat in the hot water and meditated.
A friendly Japanese woman was soaking next to me.
Suddenly, she got out of the bath, went over to her basket of cosmetics, and came over to me with a tube of her conditioner treatment.
She said that the hot springs conditioner is not rich enough, and that I should use her hair conditioner treatment, and sit with it on my hair for five to ten minutes.

I was very touched by her kindness.
She held my hand and squeezed some of the treatment into my open palm and motioned for me to run it into my hair well.

We sat together in silence, enjoying our morning bath.
We ate breakfast at the hotel and left early.
The walk to the temple was long, and included some steep hills in a forested area among fields of citrus fruit and flowering trees.

After about three hours of hilly walking, we came to a a beautiful old traditional Japanese villa with many beautiful Sakura trees in full bloom in their manicured garden.
.
We were invited in to view the incredible blooming Sakura on the grounds of the Oukai Villa Izumi, an upscale guesthouse that was having a photo contest of the Sakura blooming from April 9-15, which is the full blooming time.

We walked around the stunning grounds, bought a bento lunch box from them and then continued on our way to Sefukuji.
I was thinking about how beautiful synchronicity works.
On my map, I did not see a place for us to buy lunch today.
The road was rural and we did not pass one convenience store or cafe.
But we had with us some cookies and two old sour plum rice balls, so I was not worried.
But here we found a place to buy a lovely bento box for lunch with a Sakura motif, and were even offered to sit in their stunning garden to eat it.
We did not eat it in their beautiful gardens, but asked to take it with us to eat later.

We took a tea break a few kilometers later, in a Sakura Park, and saw a few people who were out for the day, picnicking under the cherry trees.
Many cyclists were on the road, enjoying the weekend and the great weather.
We also passed by some day hikers, especially when the road became very steep as we neared Sefukuji temple.

Sefukuji temple is said to be the most remote of all of the Saigoku temples.
Centuries ago, many of the temples of the Saigoku Kannon Pilgrimage were very challenging to access.
Often located deep within forests or high on mountains, the remoteness of these temples was part of why they were so sacred.

The construction of the railroads and other modern forms of transportation has made getting to most of the Saigoku temples an easier journey.
That being said, there are a few that are still hard to access. One such temple is Sefukuji Temple.

When we reached Mt. Makio-San, we saw many hikers either coming down the mountain or preparing for their climb up.
We chatted with one man who suggested we take another route to the temple, rather than the official entrance.

At first, we did not understand why, but as we approached the official entrance, we saw a chain across the road and a sign in Japanese.
The only word I understood was “coronavirus.”

Luckily, a friendly couple walked up to us at the same time.
They told us that the sign said that the temple was closed because of the coronavirus.
I expressed our disappointment, and explained that we were walking the Saigoku pilgrimage.
I pointed to our heavy backpacks on our backs, and they seemed so sad for us.

They went down the road to chat with the couple who owns the tea shop and snack bar by the road.
By now, a small crowd of people had gathered, all of whom were planning to walk up to the temple.

The lady came back and said that the temple was closed, so there was no one there to stamp our book and scroll, but that it was OK to just lift the chain and go under it, and walk up to the summit.

Most people did just that.
They lifted the chain and started up the long set of hundreds and hundreds of steps up to the summit.
Jules asked me if I thought we should go up or not.
Our backpacks were heavy, and nobody was there anyway.

We talked it over and decided that the journey was the most important thing.
The fact that we would not have a calligraphy seal and stamp to prove that we were here, was not important.

It was more important that we visit all the temples on the pilgrimage, chant and pray in each one, and have the experience.
We asked ourselves humorously if Kukai Kobo Daishi was collecting stamps when he walked to many of these same temples.
Of course not.
He was making miracles, healing people and sprouting fountains of sweet water out of rocks.

We decided that instead of worrying about the stamps, if at the end of the pilgrimage we have too many missing stamps because of the coronavirus, we will simply buy a completed Saigoku scroll with all its stamps in place.

Meanwhile, we adjusted our backpacks on our shoulders, and prepared for the climb up to the summit.
Sitting at the summit of Mt. Makio, Sefukuji Temple has no nearby station and requires a long hike, including many stone and rock steps, up the mountain.

It was a beautiful mossy path.
Sefukuji Temple is quite an old temple, even for a temple that is part of the Saigoku Pilgrimage.
The temple’s origins seem to date back to when Buddhism was new to Japan, around the early 700’s, the era of Emperor Kinmei.

According to the temple legend, a monk named Gyoman built the temple to enshrine Miroku Bosatsu Buddha in the hope of curing the emperor’s illness.
Later in the Nara Period, Hokai, a high ranking disciple of Gyoki, came to live and practice at the temple.
Gradually, the temple prospered and it is said that a few thousand monks practiced at Sefukuji Temple.

Some of those monks included Kukai’s teacher, Kinso, as well as Kukai himself.

Unfortunately, being famous also meant being powerful, and Buddhism in Japan has known its share of power wars.
In 1581, Nobunaga set fire to Sefukuji Temple.
Toyotomi Hideyori rebuilt the temple shortly after it was burned down, but a mountain fire in 1845 burnt it down a second time, dramatically reducing the temple’s overall size.

After the mountain fire, most of the temple remained in ruins until the late Edo Period, when it was rebuilt again.

We walked up the mountain with several other visitors.
The temple closure did not mean anything to these people, who were out to enjoy the hike and the beautiful summit.
We climbed up into the forest.
The main hall is at the summit, set among beautiful cherry trees.

We took off our backpacks and chanted the Heart Sutra.
Then we walked around all the temple buildings, hoping that the temple had left some stamped sheets that pilgrims could buy and leave money for in an honesty box, but there were no monks nor any staff members around.

Lots of people of all ages came up to the temple, just to see the gorgeous sakuras and eat their lunches at the summit, regardless of the fact that all the temple buildings were closed.
We chatted with some hikers and took photos with the couple who helped us at the entrance, where the closure chain was stretched across the path.

Then we put on our backpacks and slowly walked down fhe steep path.
We took another break, this time to eat our bento lunch, once we had descended the hundreds of stairs down to the road level.

We were tired, and we still had a long three hour hike to our hotel.
We knew that there was a Starbucks next to the hotel in a big mall, and an outdoors shop plus a full food court with lots of restaurants for dinner.

When we arrived, tired and sweaty, we hurried to the mall to eat our dinner, because the mall was closing early, by 8PM, because of the coronavirus.
The Starbucks was completely closed over the weekend.

Osaka prefecture is under more coronavirus restrictions than the rural areas of Japan we have been walking through.
The mall closed early, and some stores were closed, but only during the busy weekends.

Fortunately, the Tully’s café chain was open.
I actually love Tully’s cafés.
They have soy milk and very comfy seating.
We had a quick and somewhat rushed dinner, because the stores and restaurants were all closing by eight.

We went back to the hotel where I soaked in their hot public bath, did our laundry and went to bed very tired.
My legs were throbbing and so were my back and shoulders.
But we did it.
We have crossed the mountains from Wakayama and are now in Osaka prefecture.

With love and light,
Tali and Jules

2 Comments on “Day 18 – The Road To Enlightenment – Walking The Saigoku Kannon Pilgrimage – From Kishiwada To Izumi, Japan”