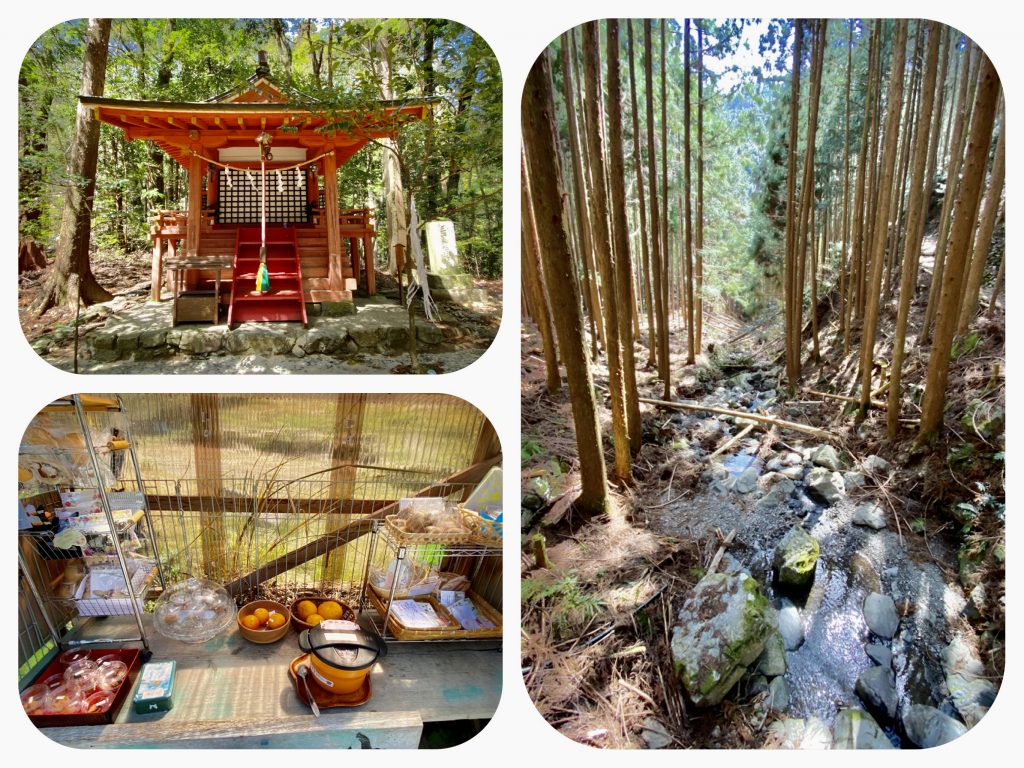 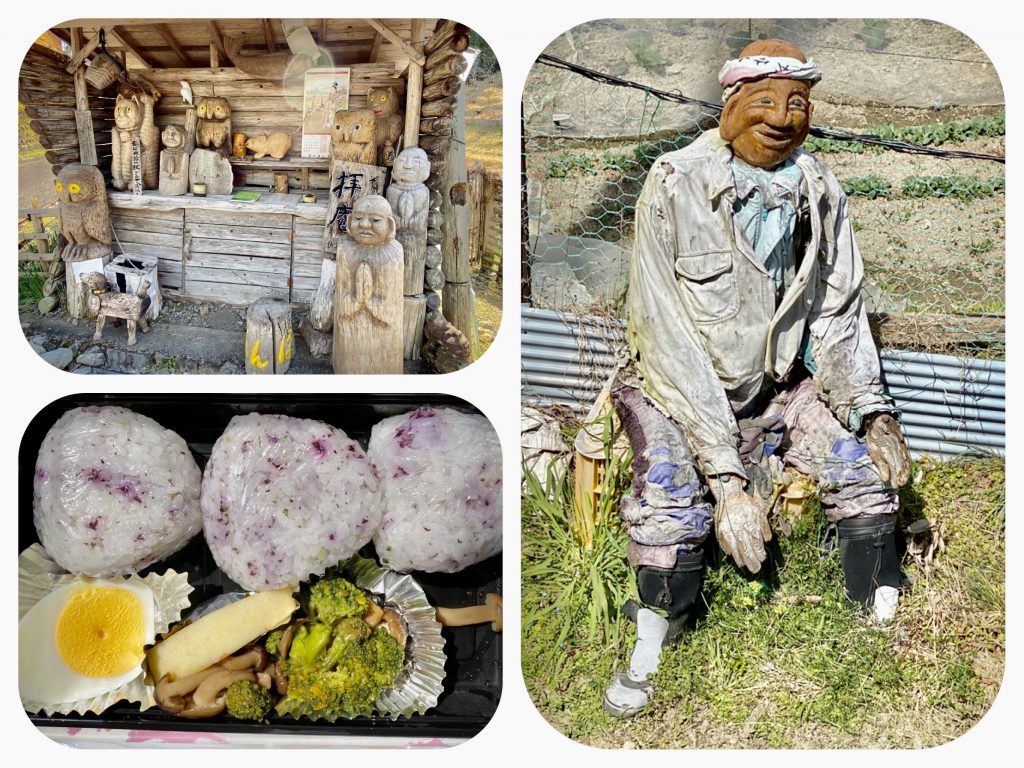 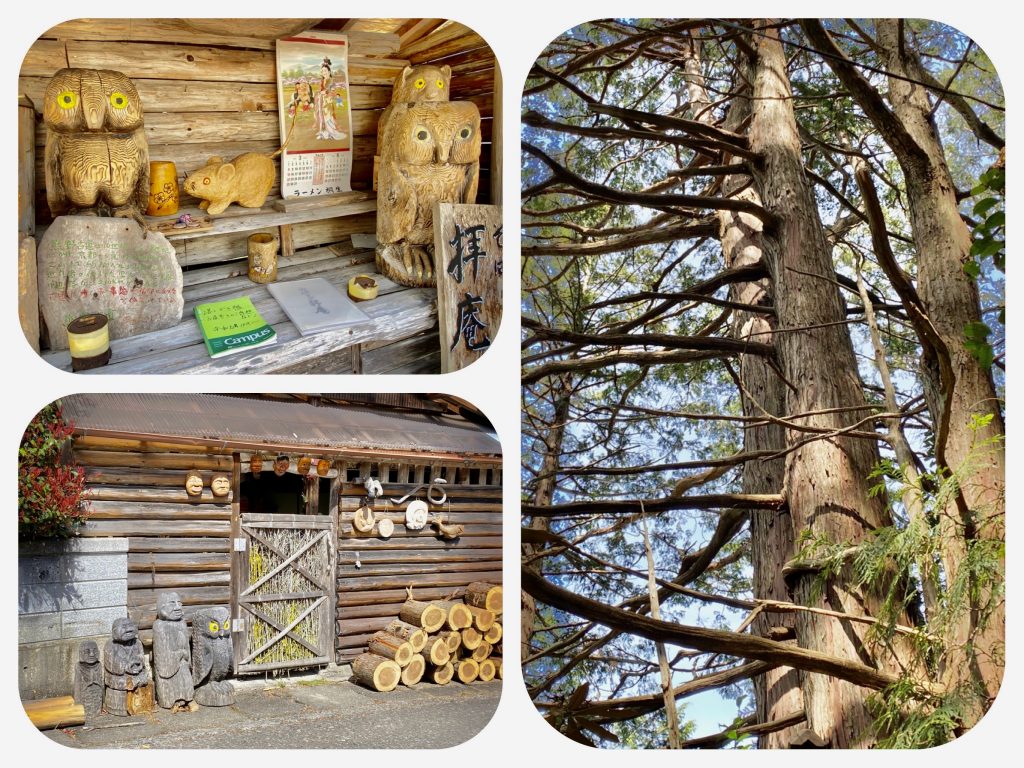 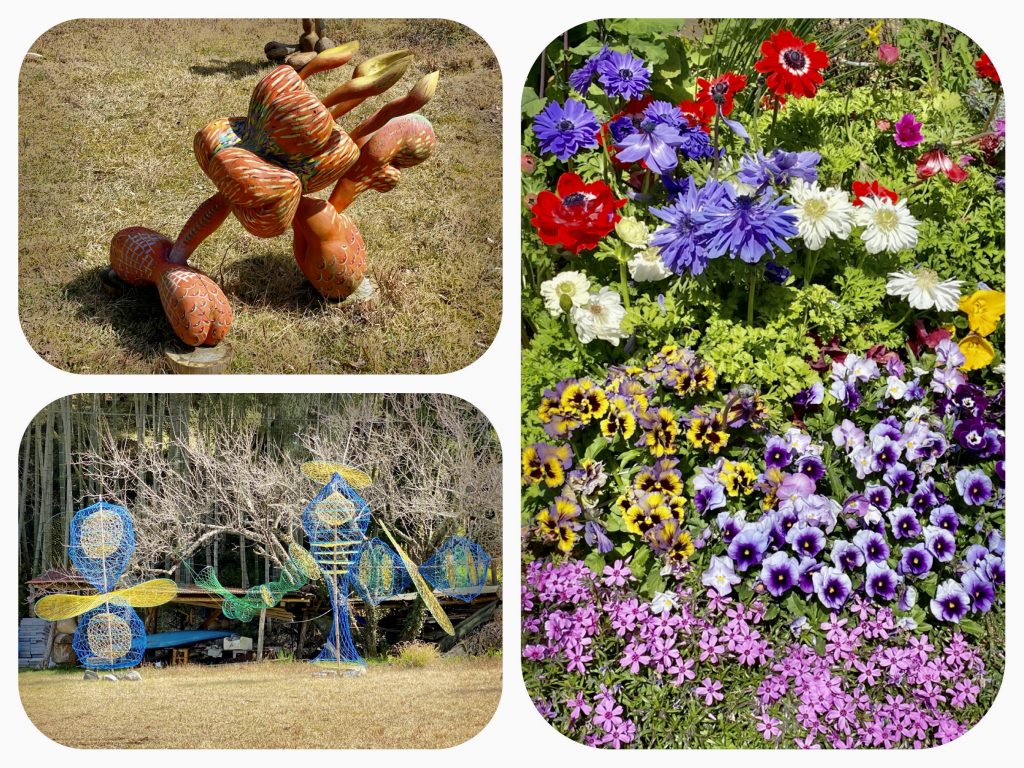 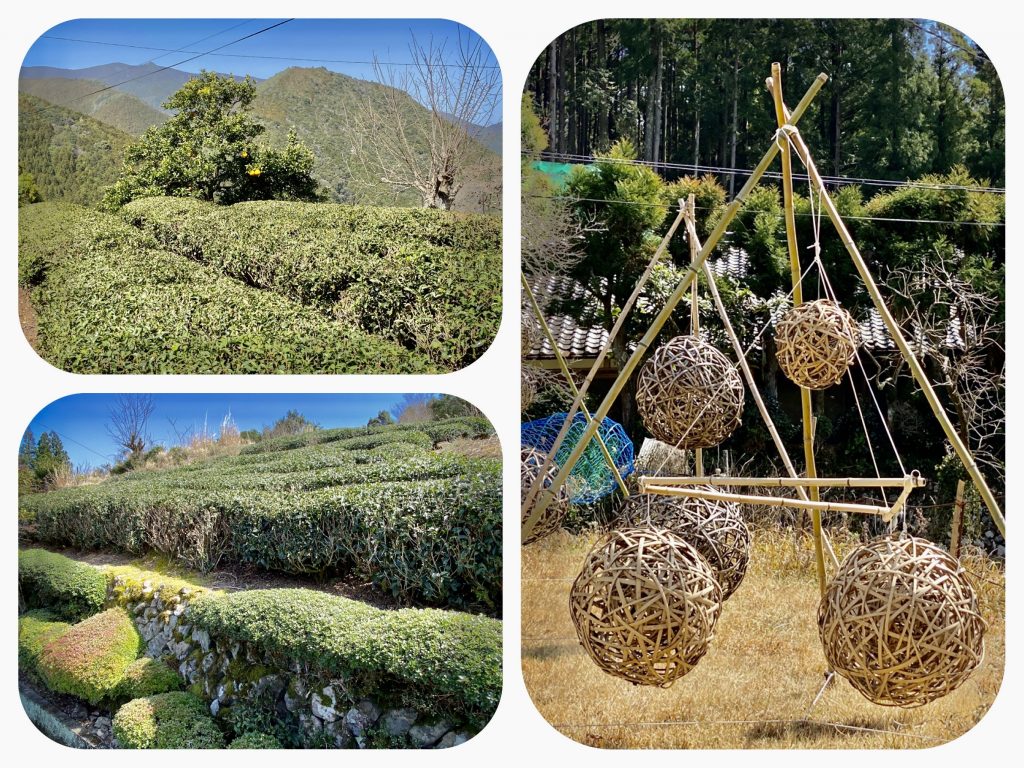 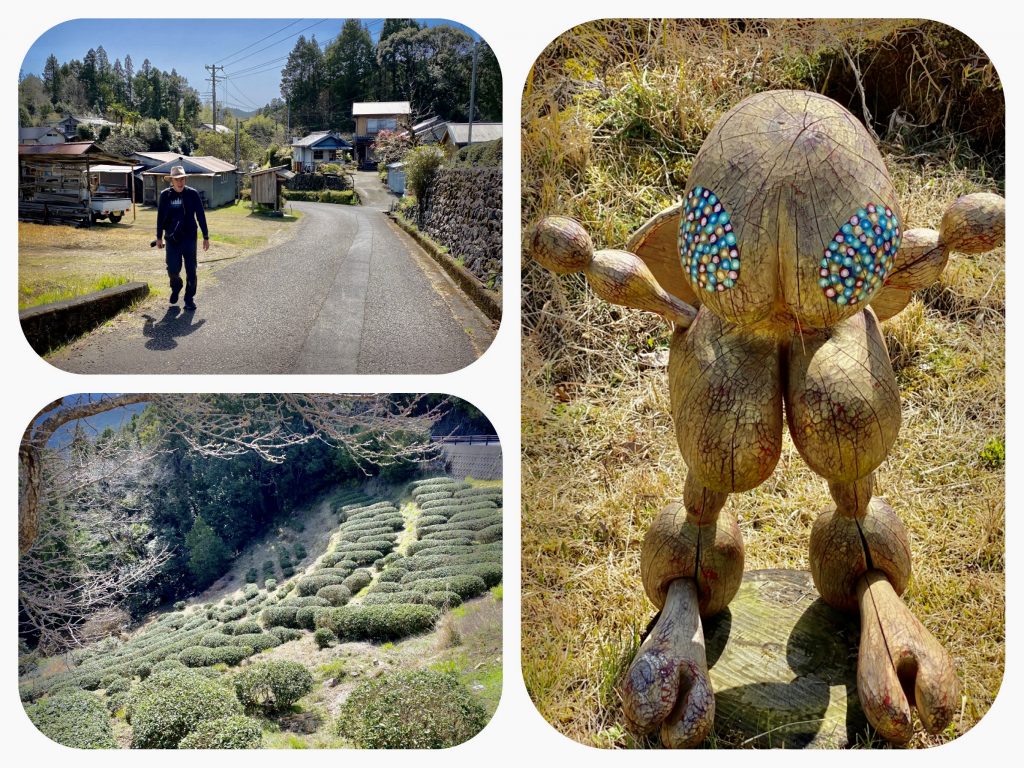 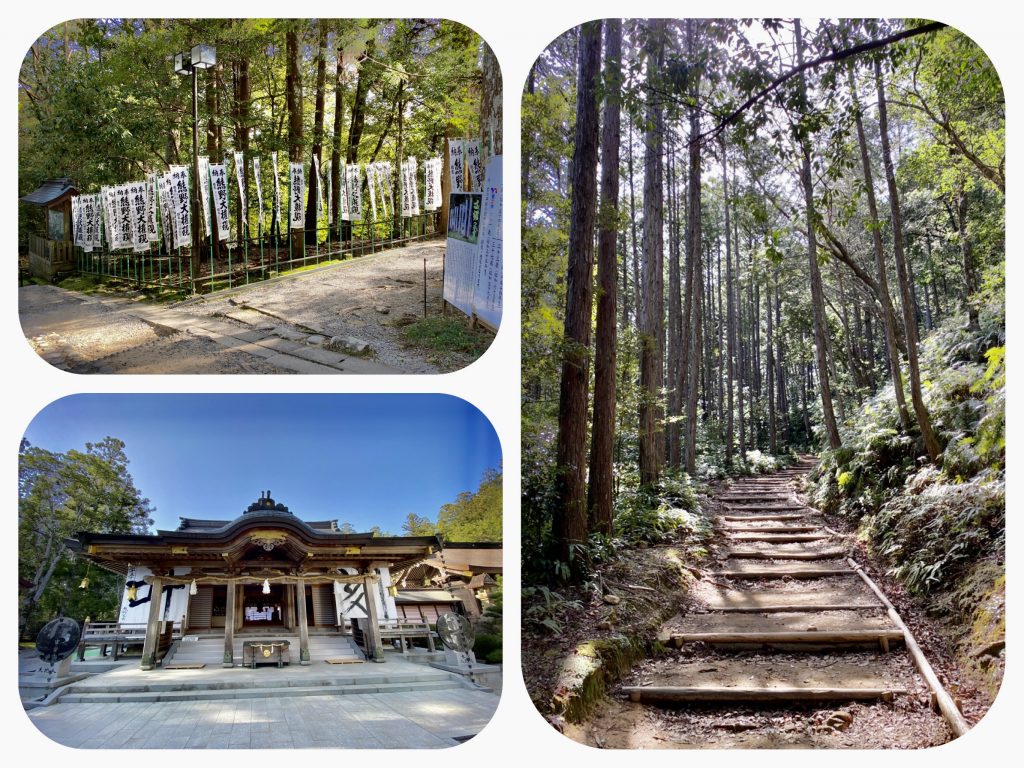 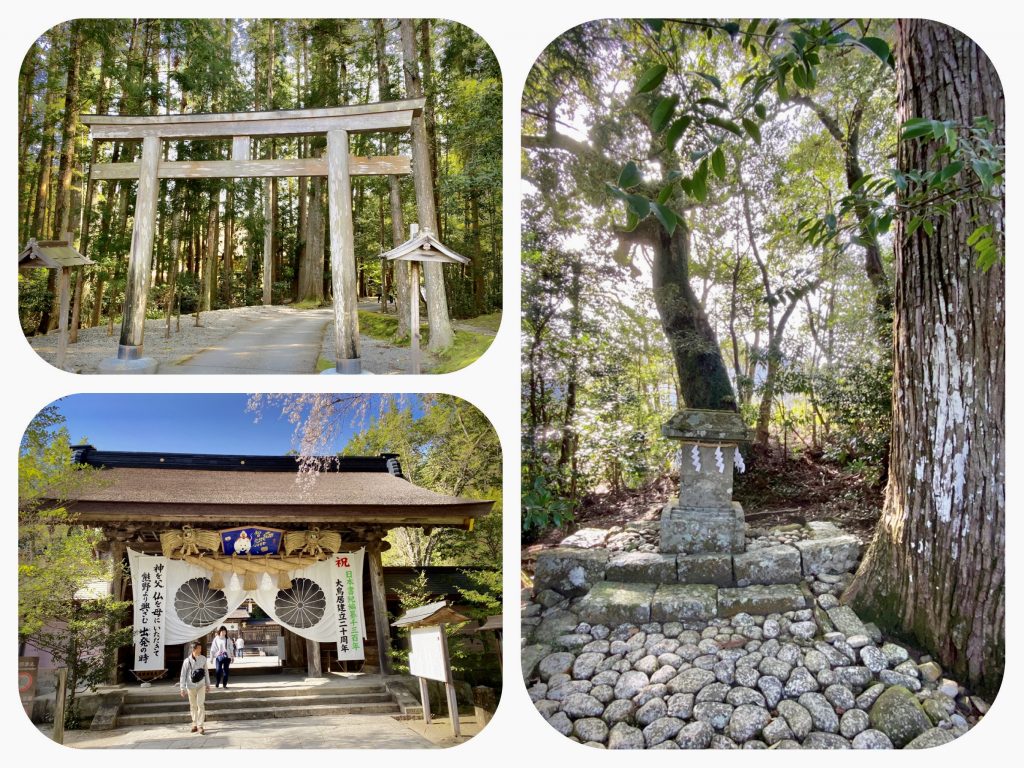 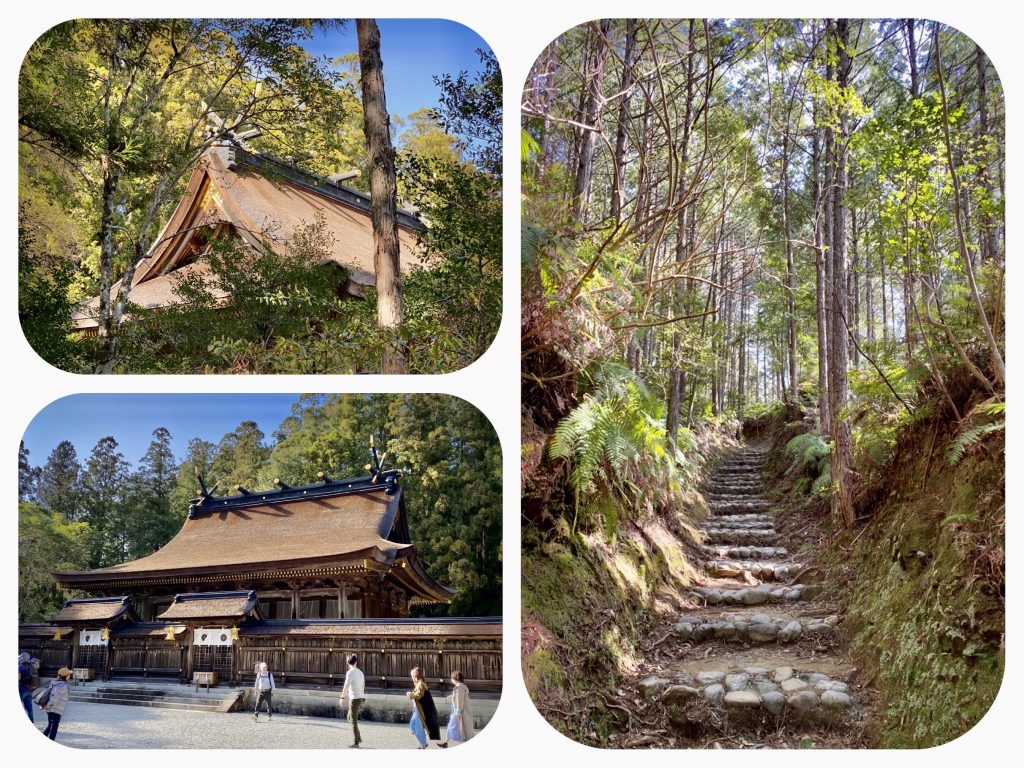 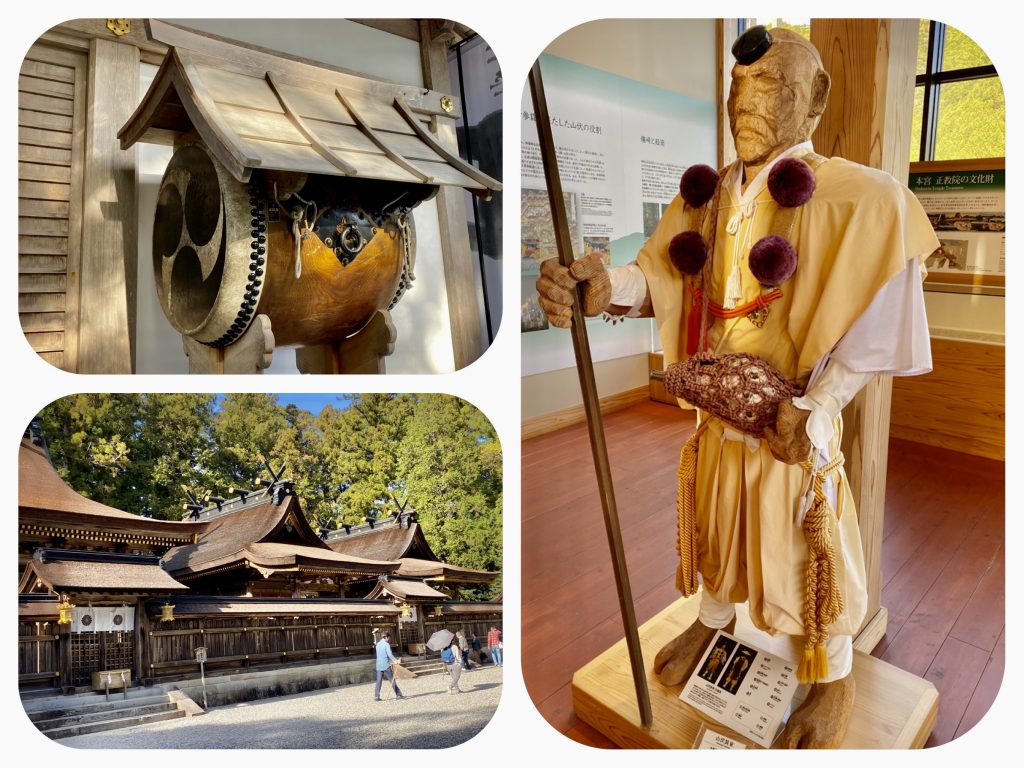 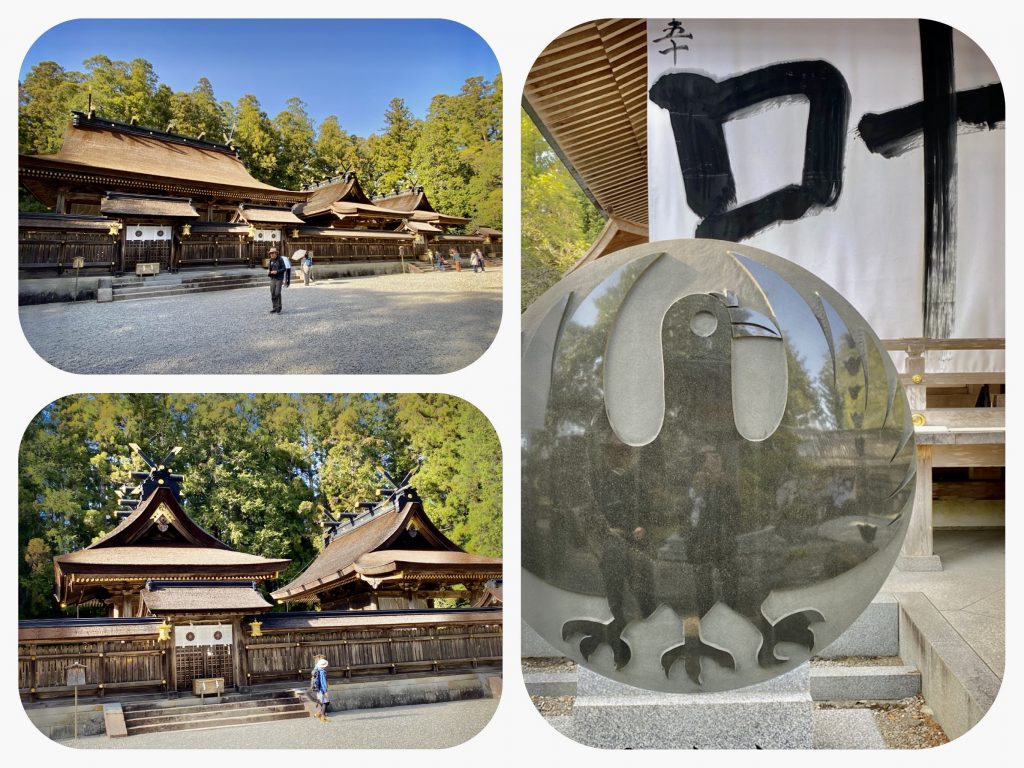 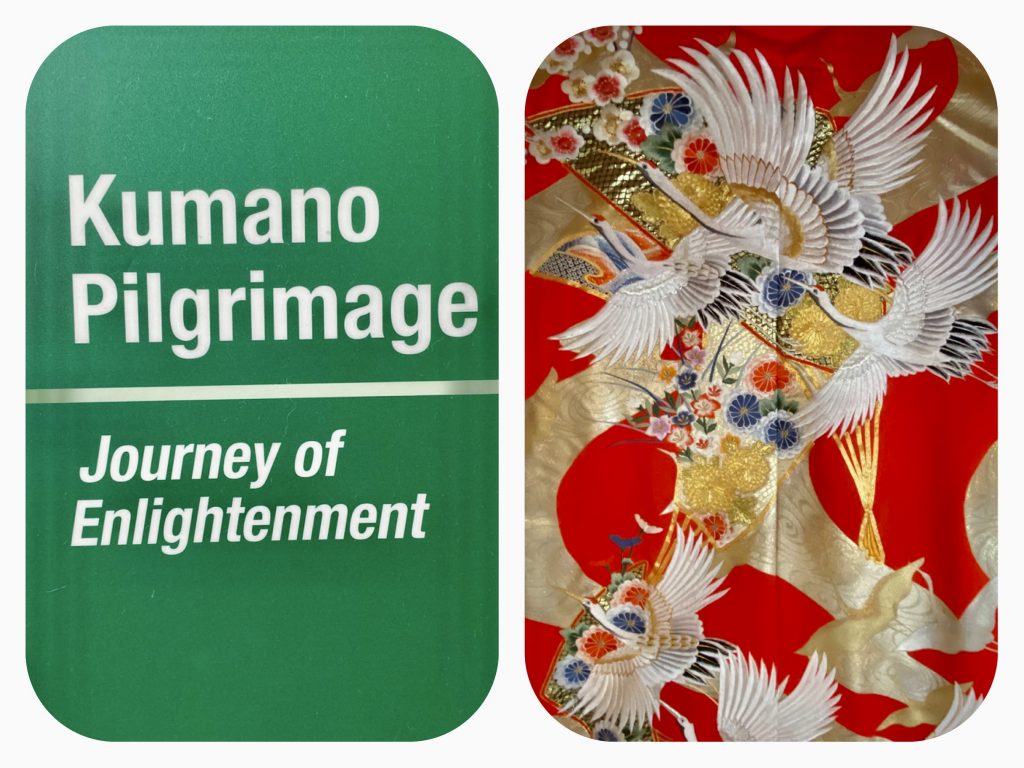 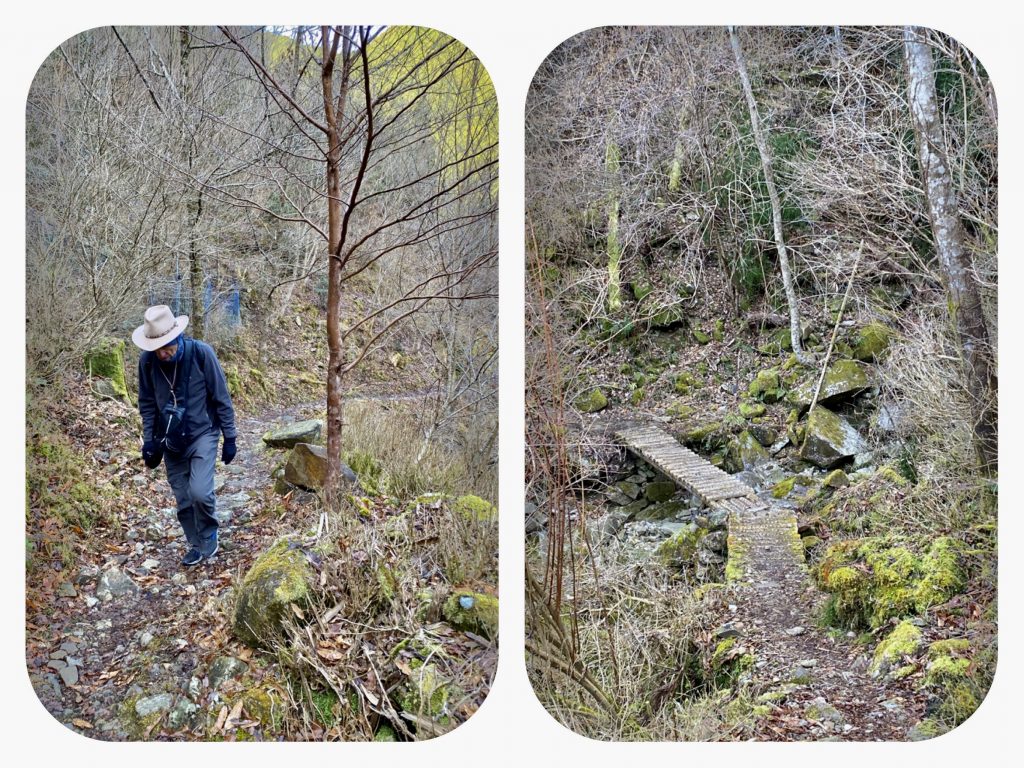 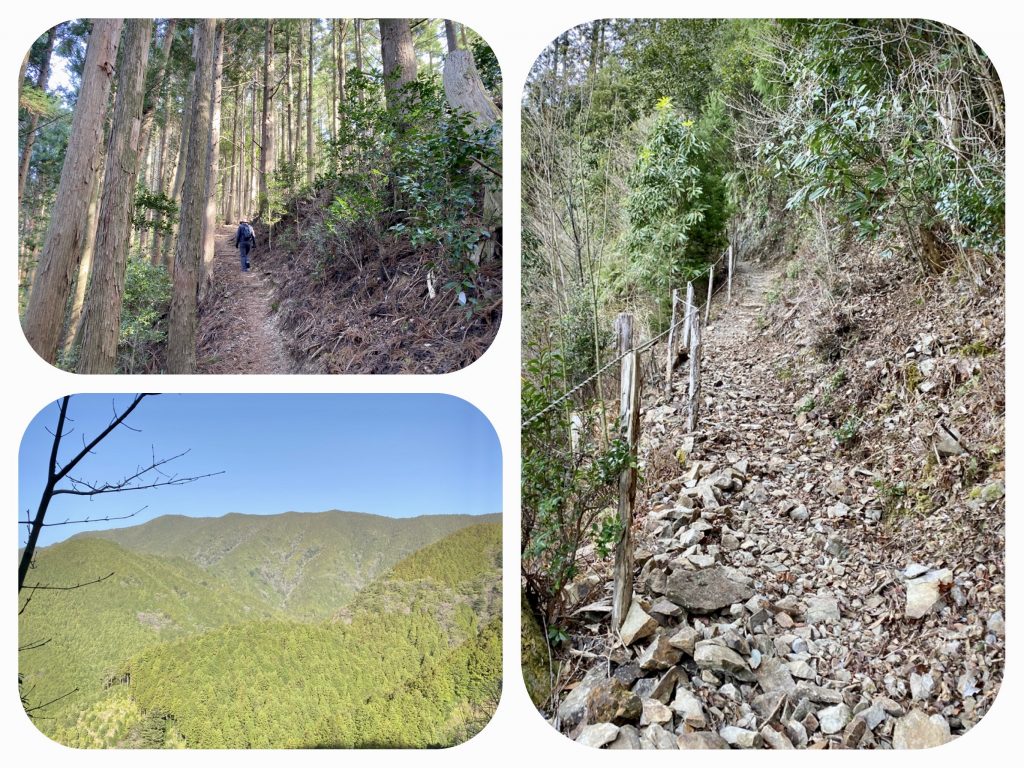 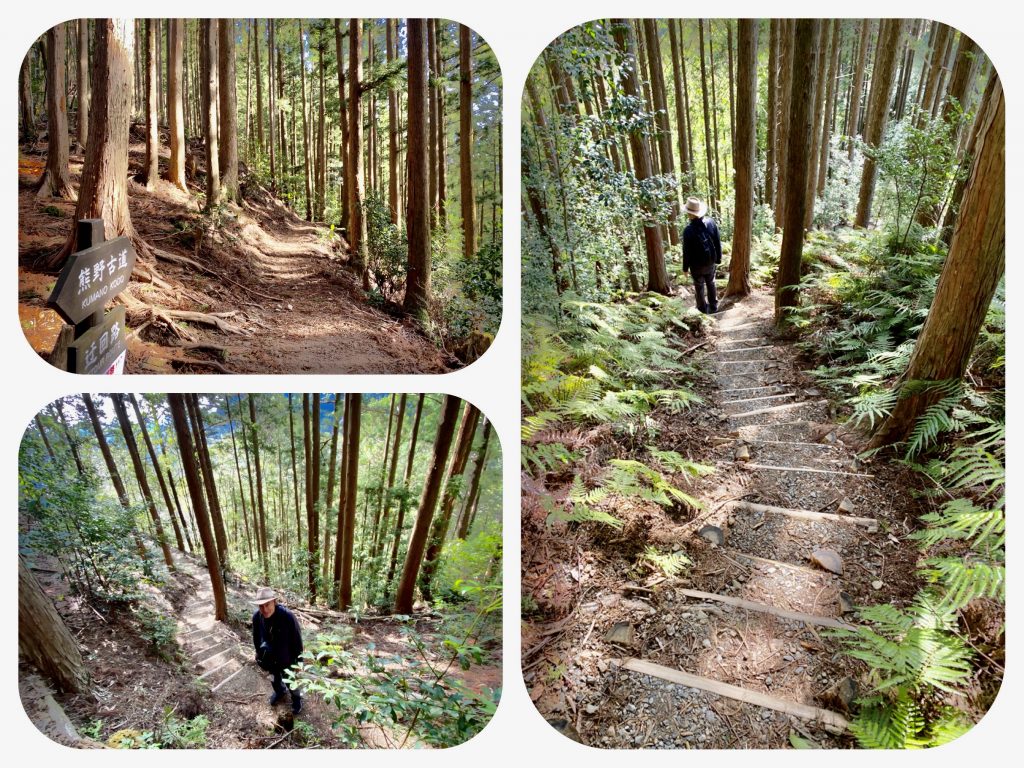 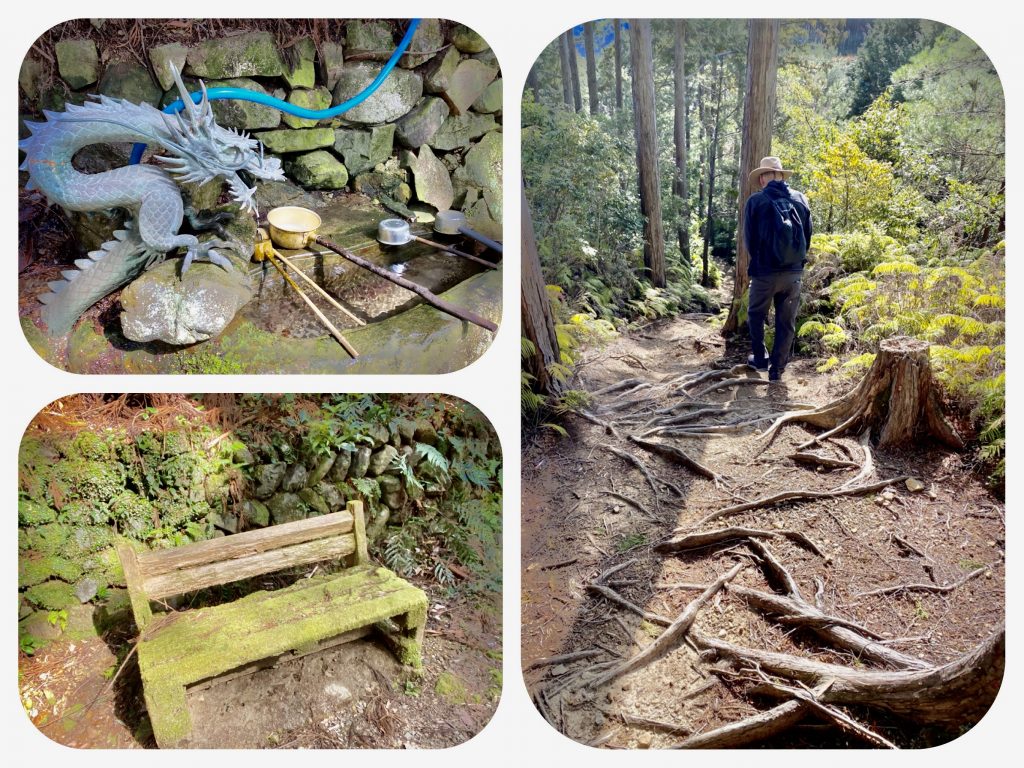 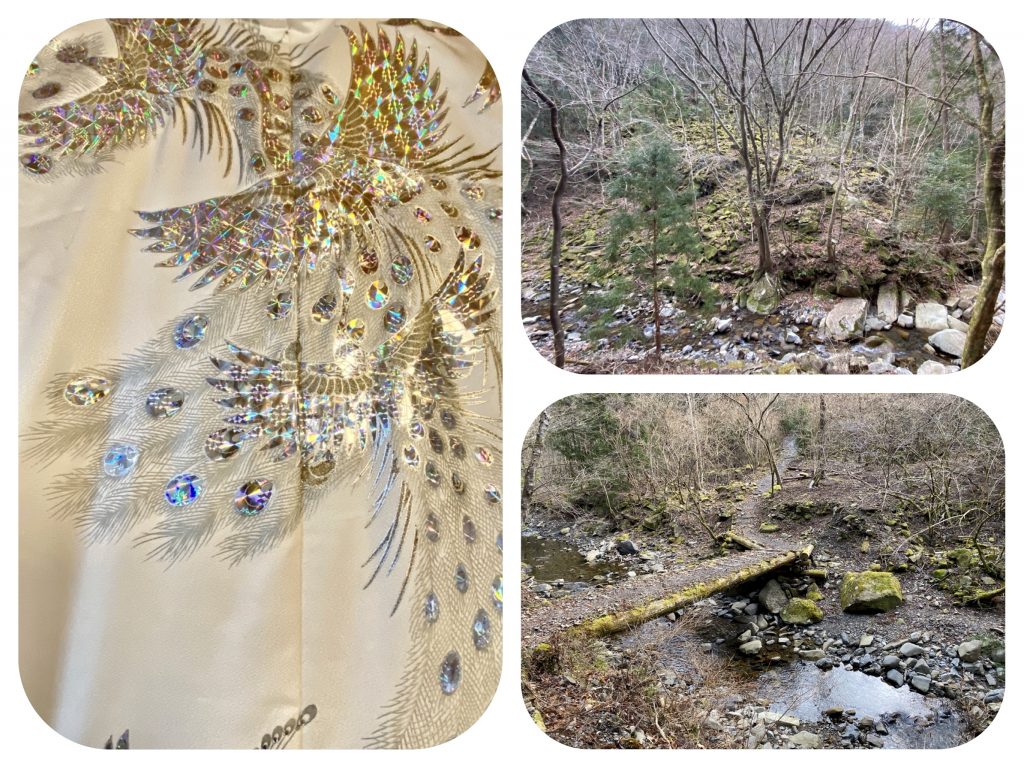 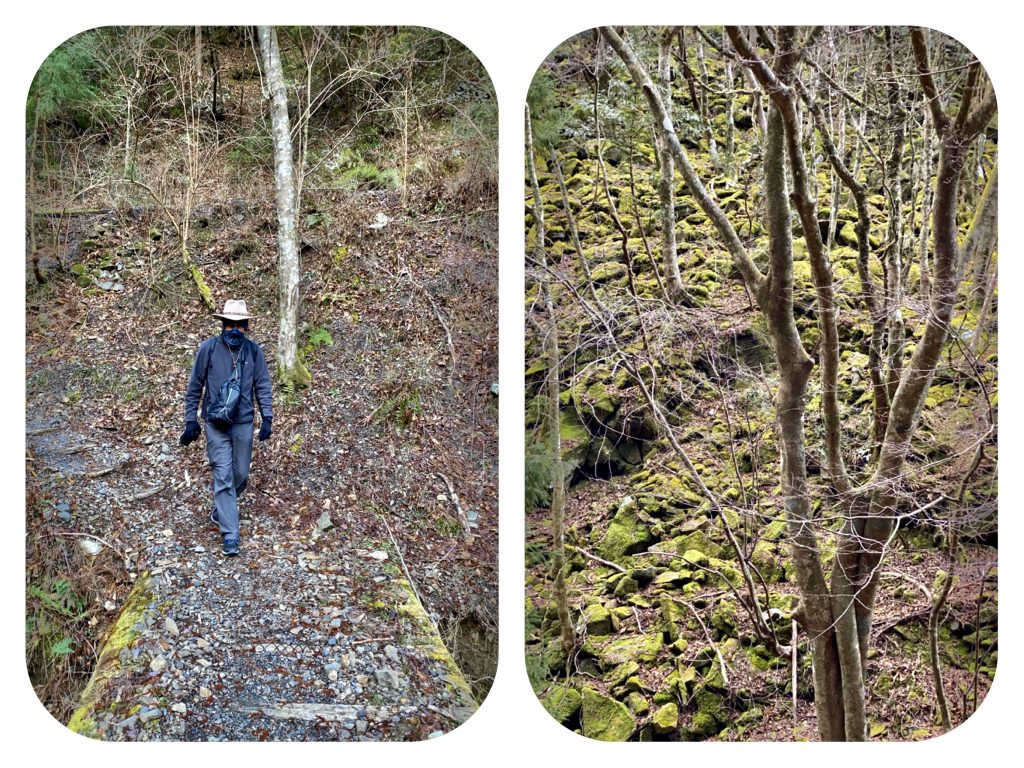 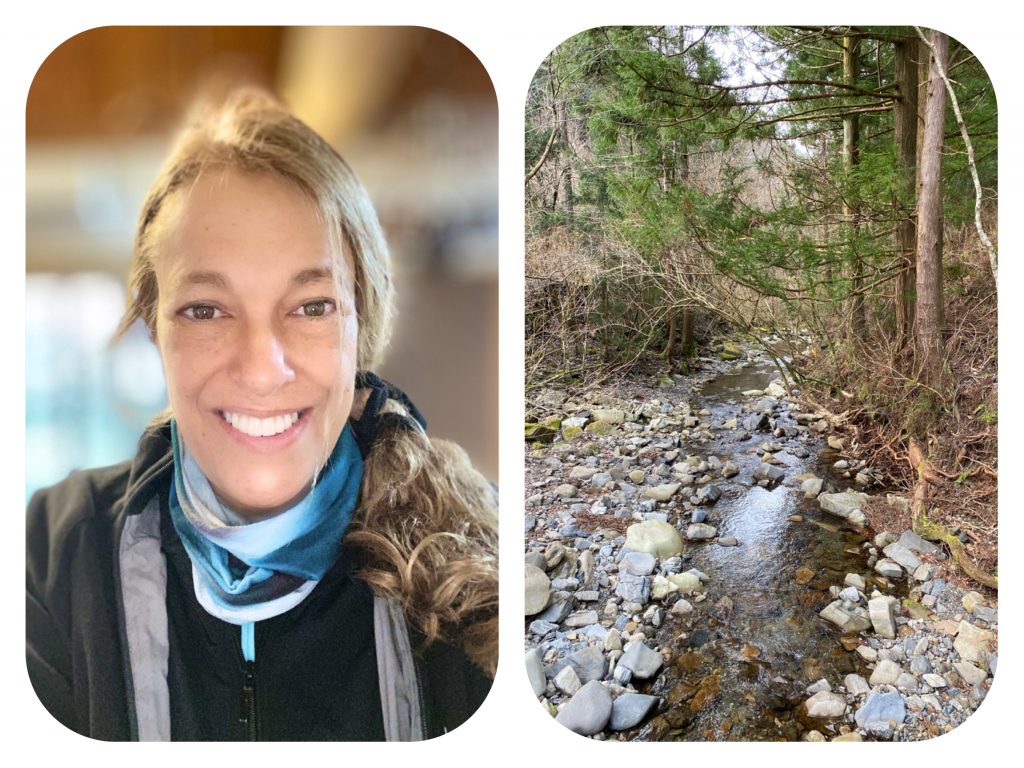 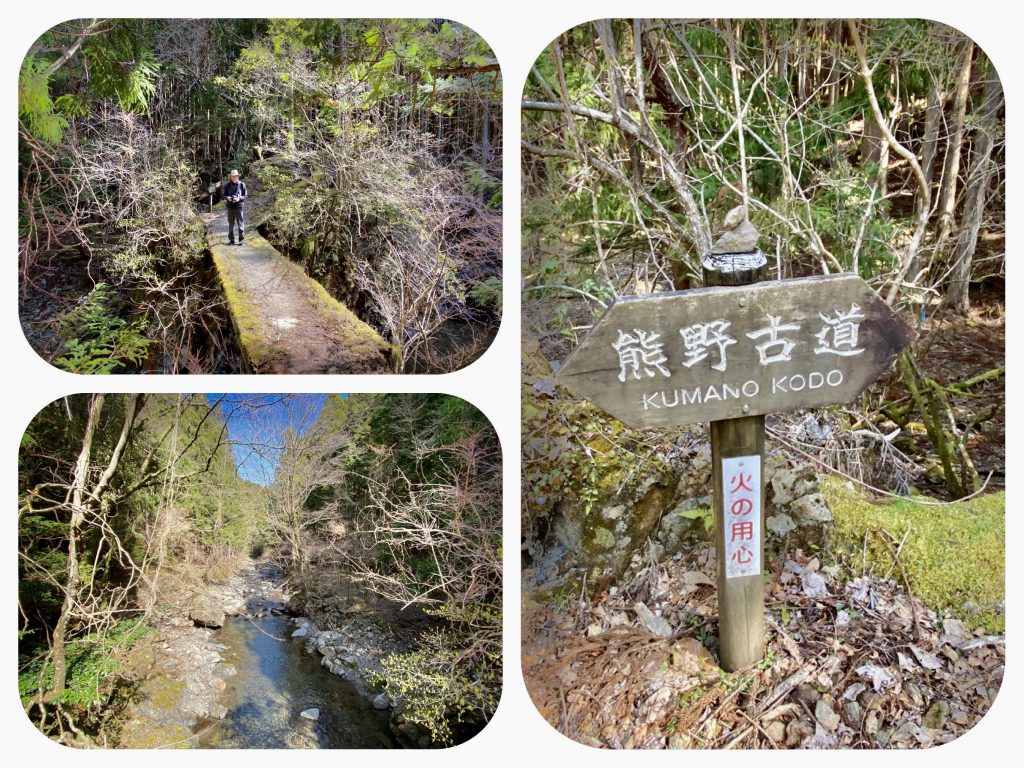 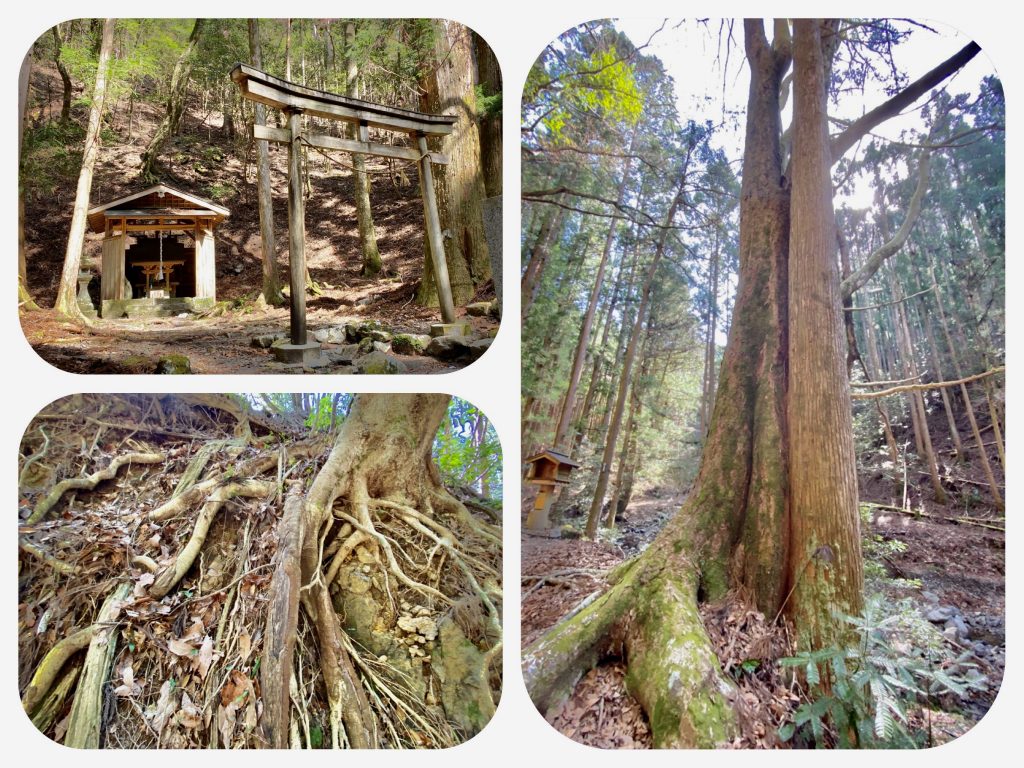 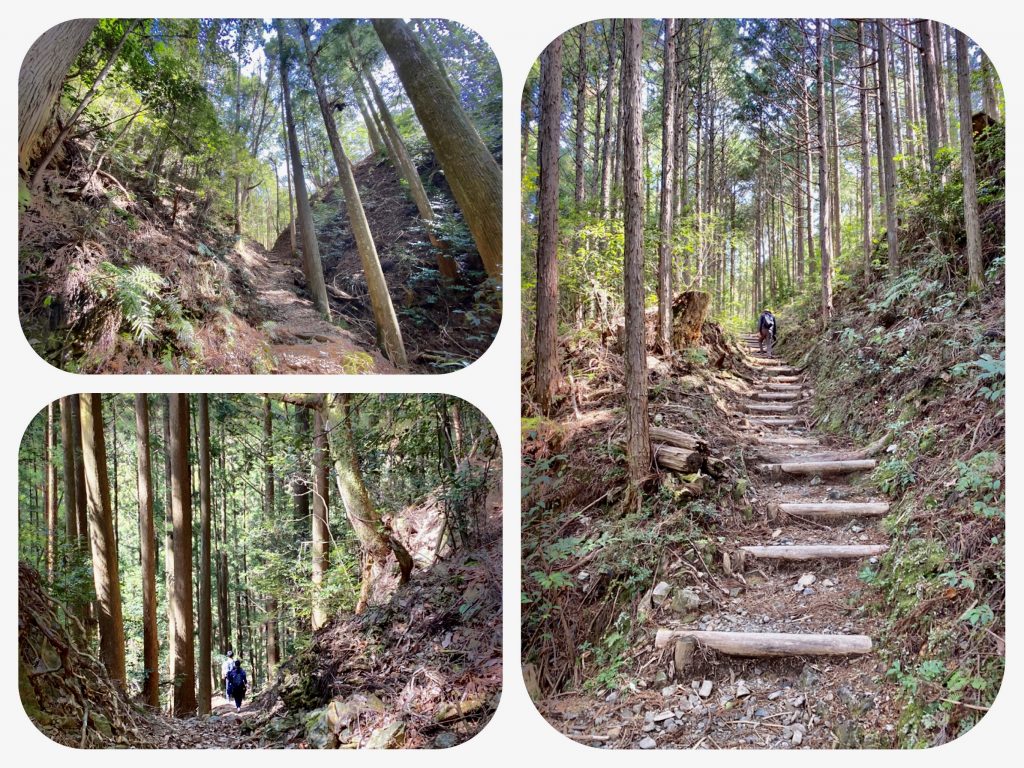 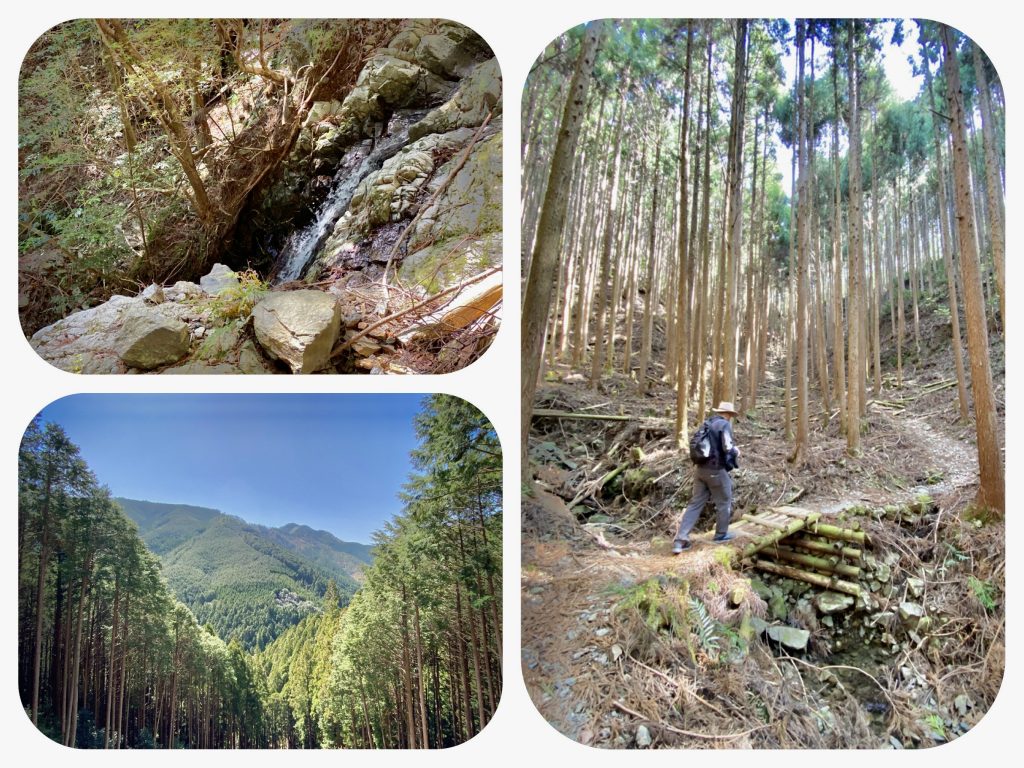 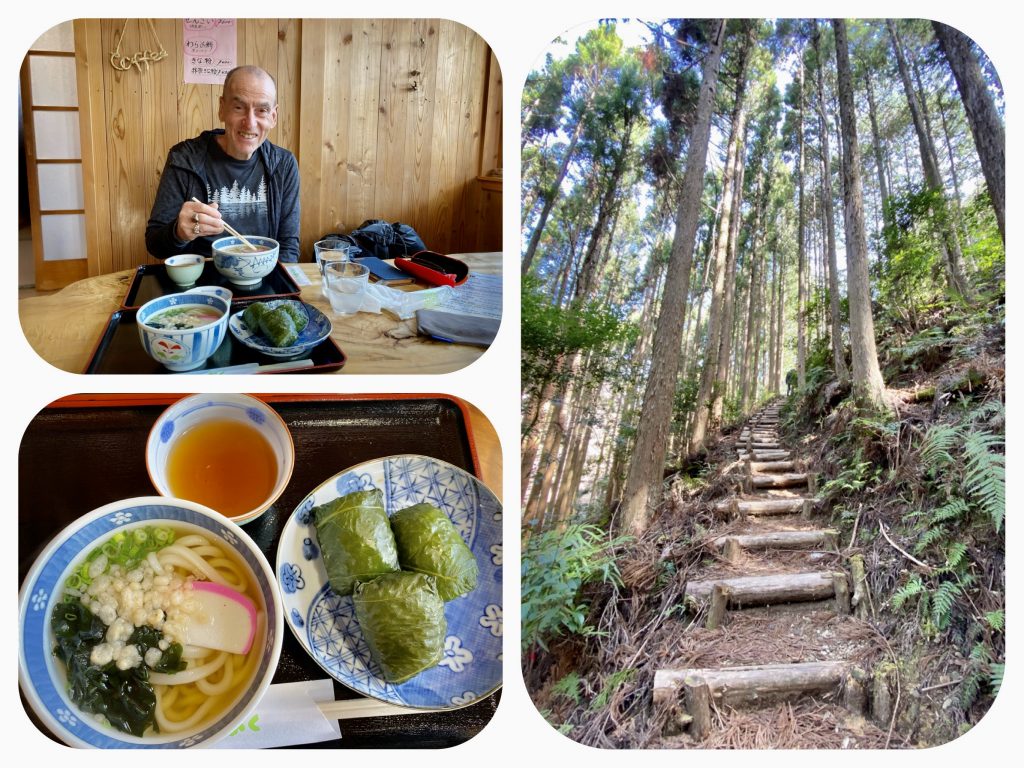 All along the forest paths of the Kumano Kodo are Oji, small shrines dedicated to the Kumano deity.

These are important sites of historical significance, in which pilgrims performed religious rites and made offerings.
Several pilgrims from the early thirteenth century kept written diaries of their Kumano travels, which are available today to read.

I can see why the Kumano Kodo pilgrimage is called the “Journey To Enlightenment.”
It is a rigorous forest hike with many mountain passes and very steep descending slopes on rocky, difficult paths.

We started today very early, as this was to be one of the two very long and difficult hikes on the Kumano.
We ate an early simple breakfast of one piece of toast and one fried egg with a small cup of tea.

Our guesthouse was very comfortable.
They rent out the whole house and like the other guesthouses, there was a full kitchen, a laundry facility, and a very comfortable living space.
But they do not make meals.
Instead, they make arrangements with a nearby cafe to provide their guests with a delivered dinner, and breakfast is served at the cafe in town.

We started walking at 7:40 in the morning.
It was a cold morning, and Jules wore a warm winter hat underneath his wide brim Stetson hat.
But as we climbed up and up for nearly two hours, we warmed up.

Today we had two big detours on the path, caused by typhoons that had washed away the narrow path.
One detour was on a narrow and challenging forest path with lots of climbing, while the other directed us to wide logging roads, and to an old car road with no cars at all.

Near the small Oji shrines along the way, there are usually places to sit, which pilgrims use to rest and have something to eat or drink.

We stopped for a mid morning tea and to eat the freshly made rice balls that we had bought from the cafe owner who also owns the guesthouse that we stayed at two nights ago.
They were still warm and very delicious.

We were happy to support her by staying at her place and buying food from her, as she is such a hard worker.
She is running two small rental guesthouses and a cafe.
She told us that she was recently divorced, and that she works alone and all day long.
Despite the well known distance keeping Japanese decorum and the more recent instructions to keep social distance, she was leaning on my knee, warmly holding my hands, and hugging me.

The forest climbs were hard on my leg muscles and the downhills were hard on my knees, but I made it.
Jules was doing well.
His legs are very strong and always have been.
For me, the only thing that is very strong about me, is my spirit.
Everything else I need to train and get into good shape, my legs, my arm muscles, my back muscles, etc.

At Hosshinmon Oji, less than ten kilometers from our destination, we stopped to eat our packed lunch.

We saw about a dozen pilgrims in the forest today, and many more dozens of people who came on the bus to start their walk at Hosshinmon Oji.
These people only hiked between Hosshinmon Oji and the Kumano Hongu Taisha Shrine.
At the Hongu shrine, we saw more than a hundred people who had come to worship.

The path between Hosshinmon Oji and the Hongu Taisha was very scenic and much less demanding than the earlier part of our walk today.
It also passed through small villages growing tea, where the locals had placed honesty boxes selling home made jams, local tea, oranges, pickled plums, and garden produce.

Hosshinmon Oji was a very important spot along the way to the Hongu shrine.
“Hosshin” means “Spiritual Awakening, “ or “Aspiration To Enlightenment.”
“Mon” means a “Gate,” and so the significance is that a pilgrim now leaves behind his old ideas and ego identity, and enters through the Mon gate, into a new light-filled land of paradise and rebirth.

At the end of the hike, our path took us straight into the Kumano Hongu shrine.
It is one of the three major shrines of the Kumano Kodo Sanzan.

This Hongu Taisha is made up of three main temples.
Legend has it that the Kumano gods sent a messenger in the form of a crow with three legs.

The crow descended into the branches of a giant oak tree in this clearing, and is now a symbol of the gods residing in the three Kumano shrines.

Normally, a crow is considered to be a bad omen, but here, the three legged crow is engraved into black marble and rock monuments.
I bought a small ceramic crow as a memory of our journey.

Today, it is said that in each of the three temples buildings in the Hongu Taisha, dwell the spirits of the gods, representing Earth, Heaven and Humankind.

Many people came today to pray in front of the three temples for a safe passage in life.
We did the same.

There are a few shops, eateries and stalls around the shrine, selling ice cream, water and snacks.
We had a break in a small cafe that served veg udon noodles and Mehari Zushi, a rice ball wrapped with a mustard leaf and filled with pickled mustard leaves.

We met inside the café a couple of Japanese hikers that we have seen several times in the past three days.
They were strong hikers despite being elderly, making good speed over the rocky steep path.

They told us make sure to visit the Kumano Kodo museum and information center behind the café.
They also told us that today was their last day of hiking.
They will be taking the bus back to Kii Tanabe.

The bus stop was full of hikers, all finishing their hike at the Hongu Taisha.
We will be continuing on to Koguchi and then to Nachi-San, where the Nachi Taisha Shrine is located, as well as Seiganto-ji, temple #1 on our Saigoku pilgrimage.

Ahead of us are two days of rigorous hiking.
People say that without a doubt, this section of the Kumano Kodo from Hongu to Nachi, is the most difficult part of the pilgrimage.

After our café break, we visited the museum and information center, and learnt more about the Kumano Kodo and the Yamabushi mountain ascetic monks who used to live and train in these mountains, seeking enlightenment.

I could feel the cold winters they must have endured, the lack of food, the rainy nights….
But on balmy nights they must have seen a glorious moon, smelled spring flowers and hopefully were visited by divine deities, unseen by normal human eyes….

Our guesthouse tonight in Hongu has four small Japanese style bedrooms with private bathrooms.
They were all full tonight.
We went to dinner in a restaurant near the guesthouse.
It had a very cool design, but the food was not great.
We ordered the pasta of the day, but the spaghetti was too crunchy and needed a few more minutes of cooking time to be Al-dente.
They did have a nice selection of local plum wines.

Back at the guesthouse, we laid out our futons on the tatami mat floor and made our beds for the night, making sure to double the thin futon mattresses.
I rubbed some tiger balm and CBD oil on my aching leg muscles, and meditated myself to sleep.

It was a tiring but a very beautiful day in the forests of the Kumano Kodo.