Day 53- The Chūgoku 33 Temple Kannon Pilgrimage, Japan – Temple #29, Daisenji, and a Bit About Food and Its Vibrational Aid To Your Divinity 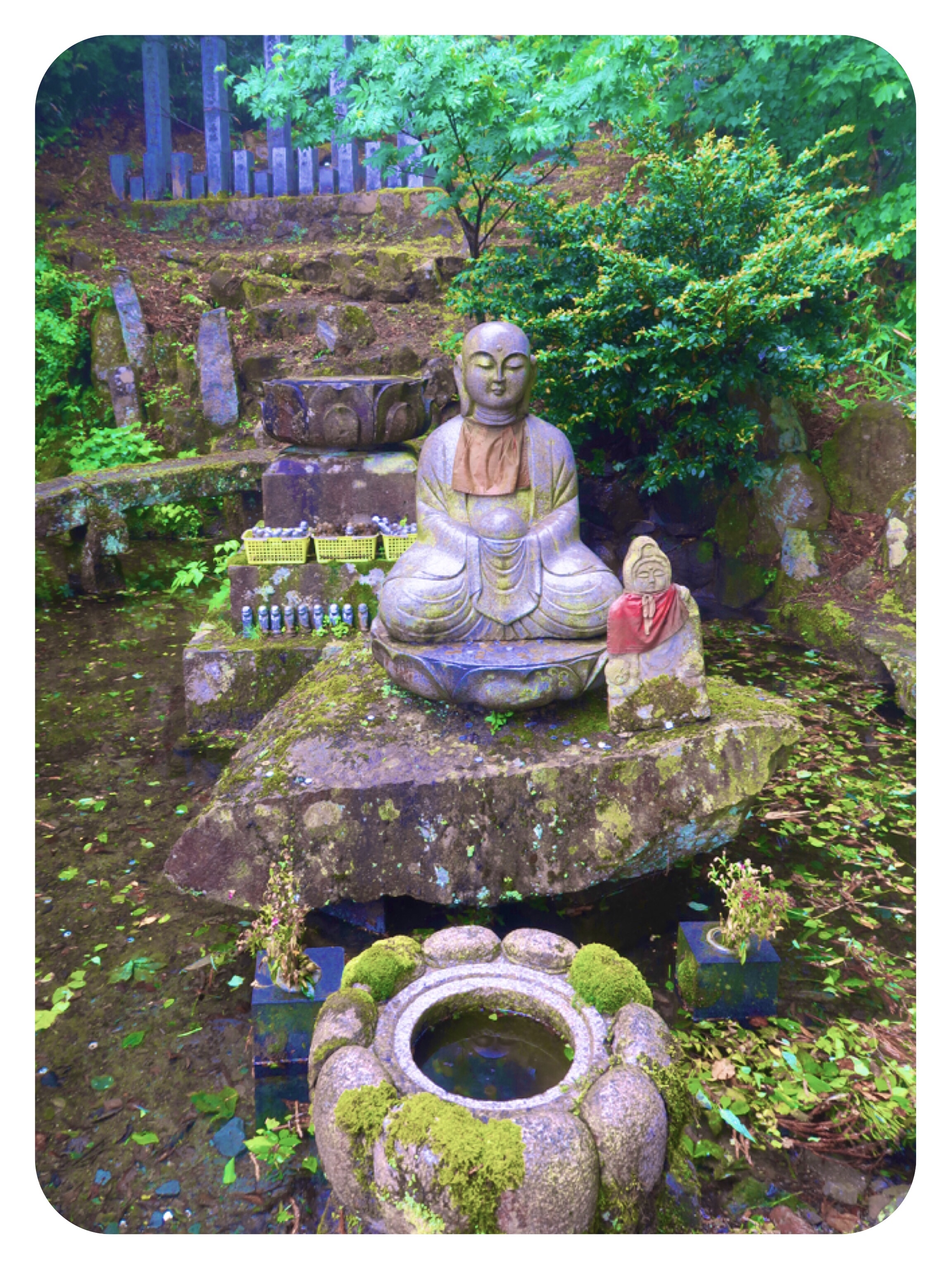 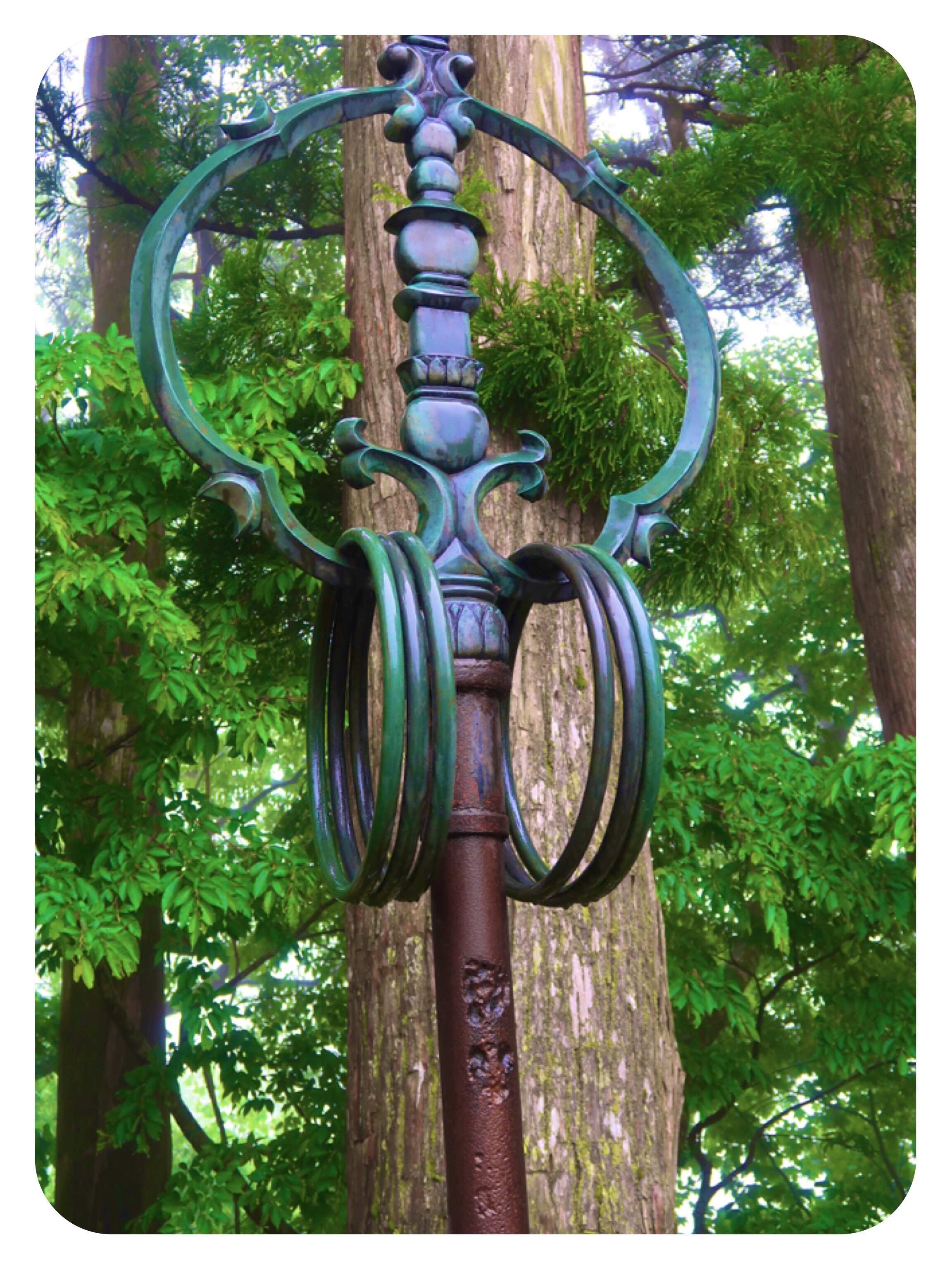 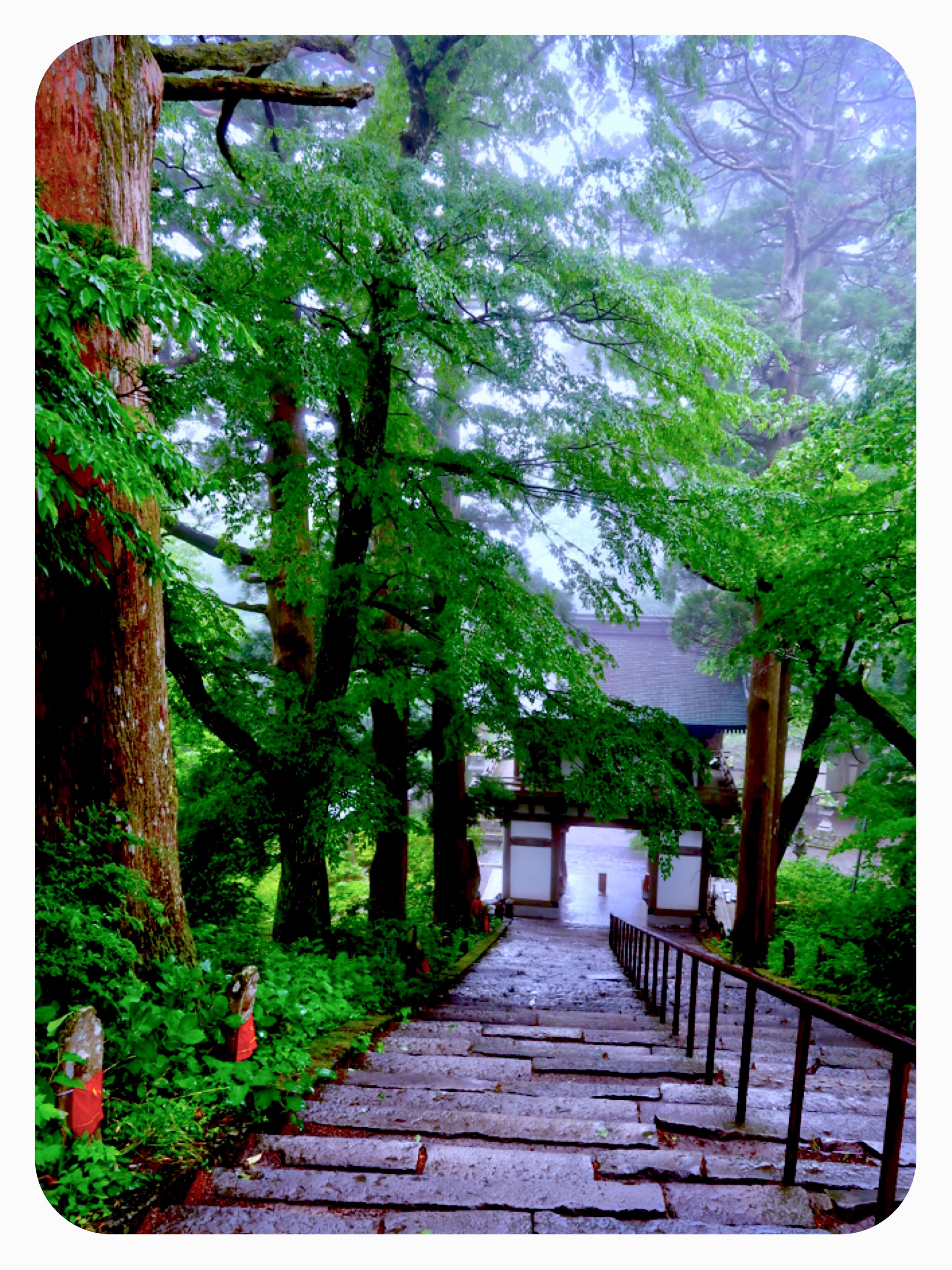 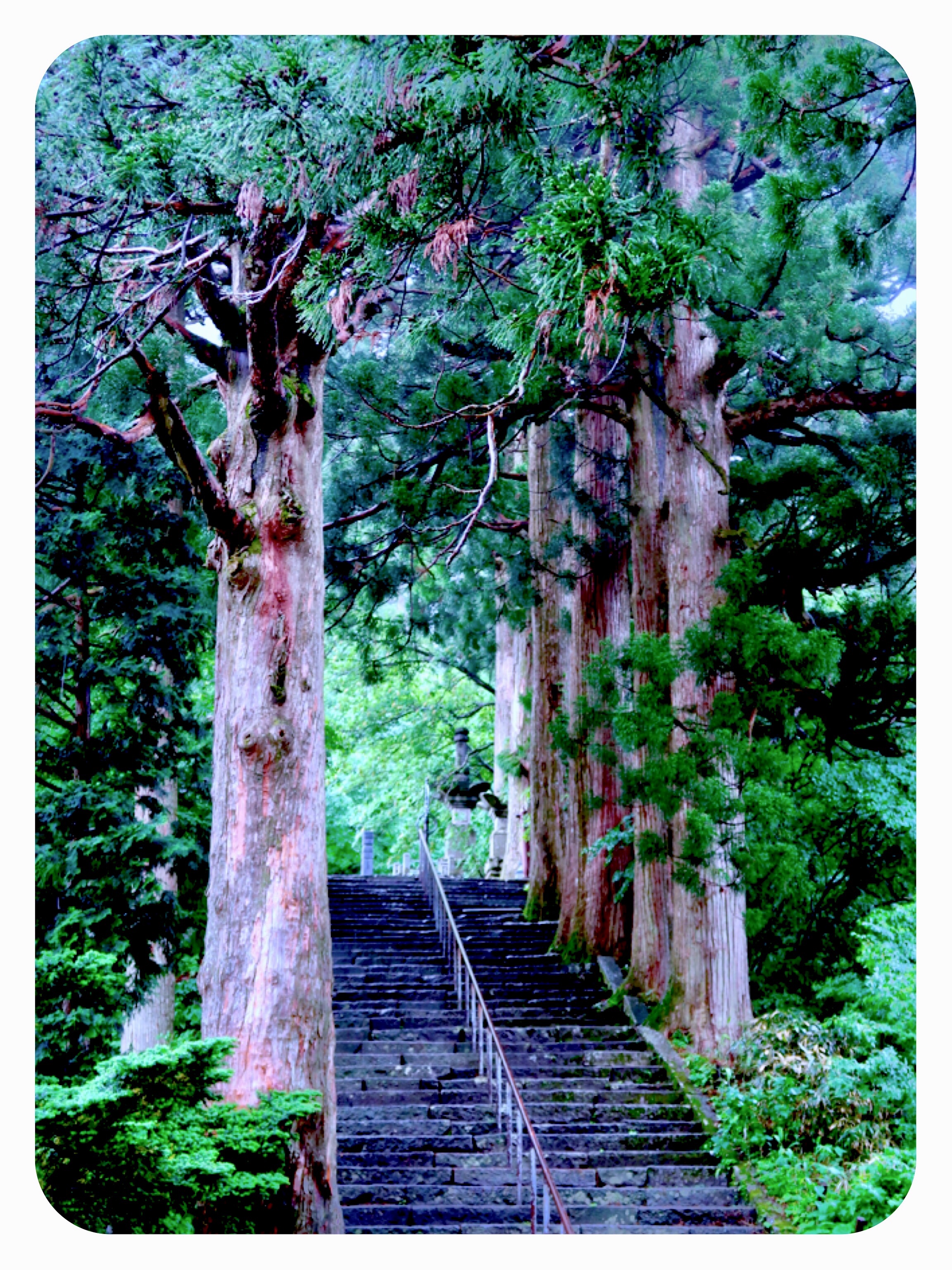 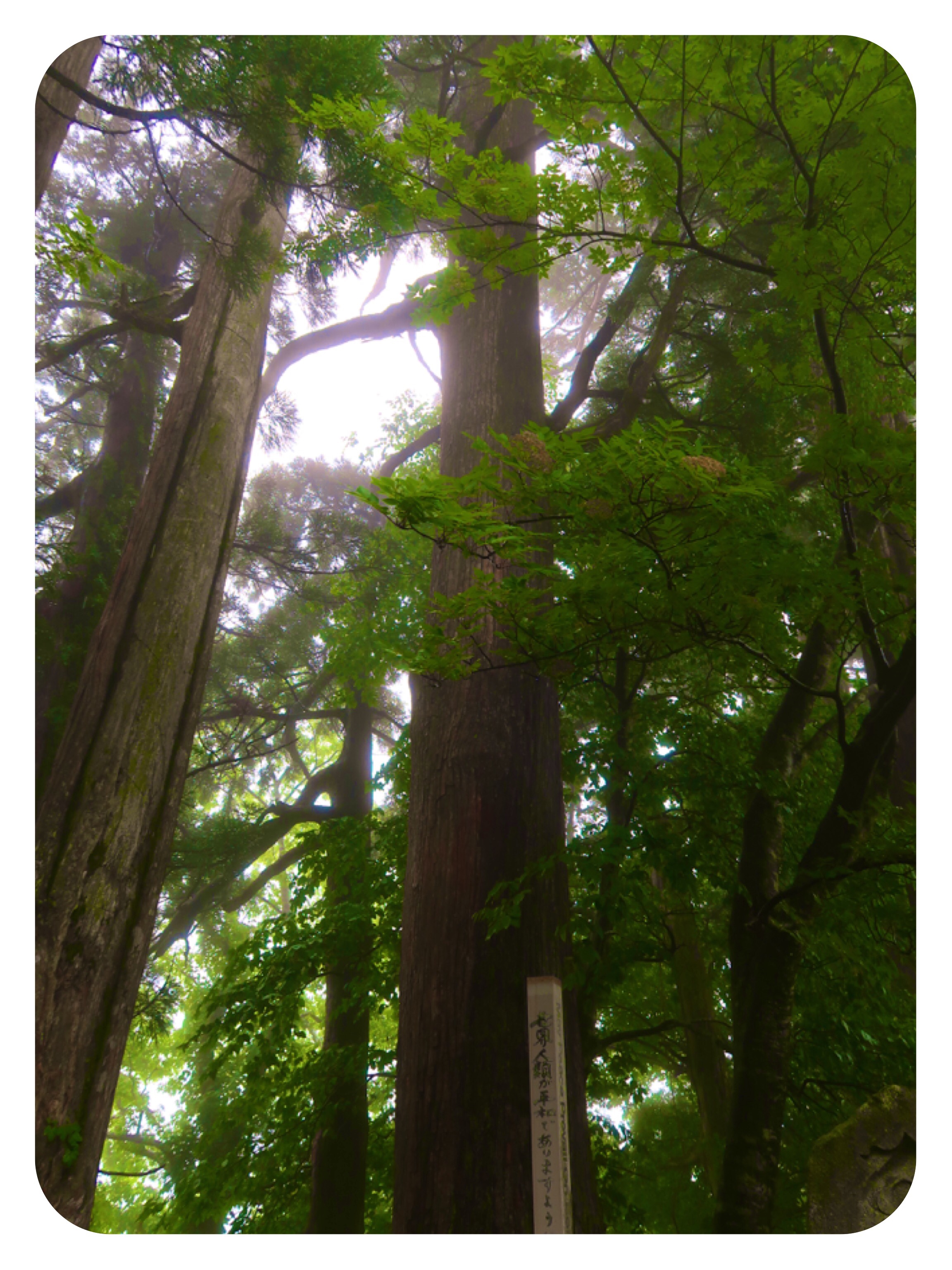 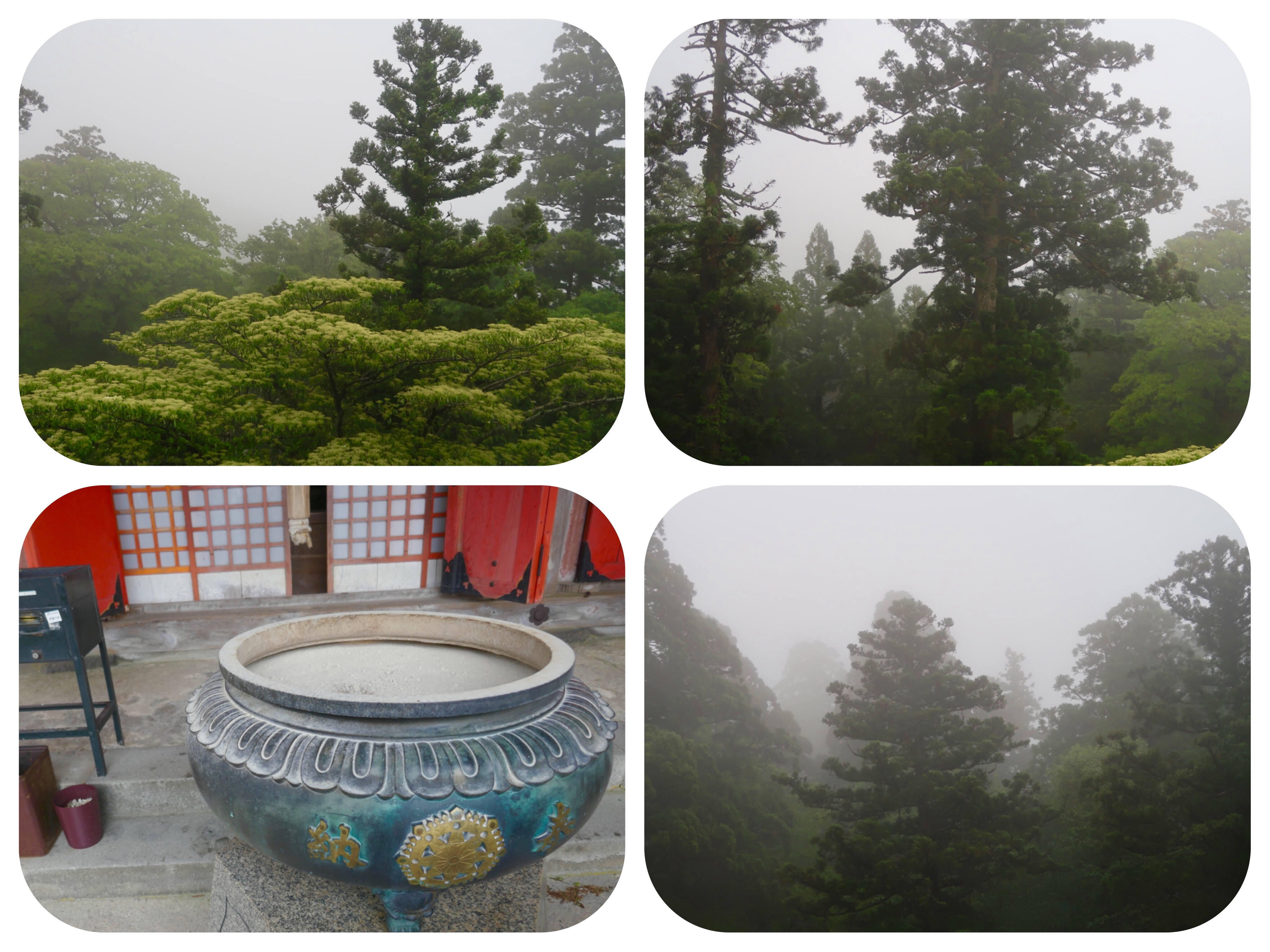 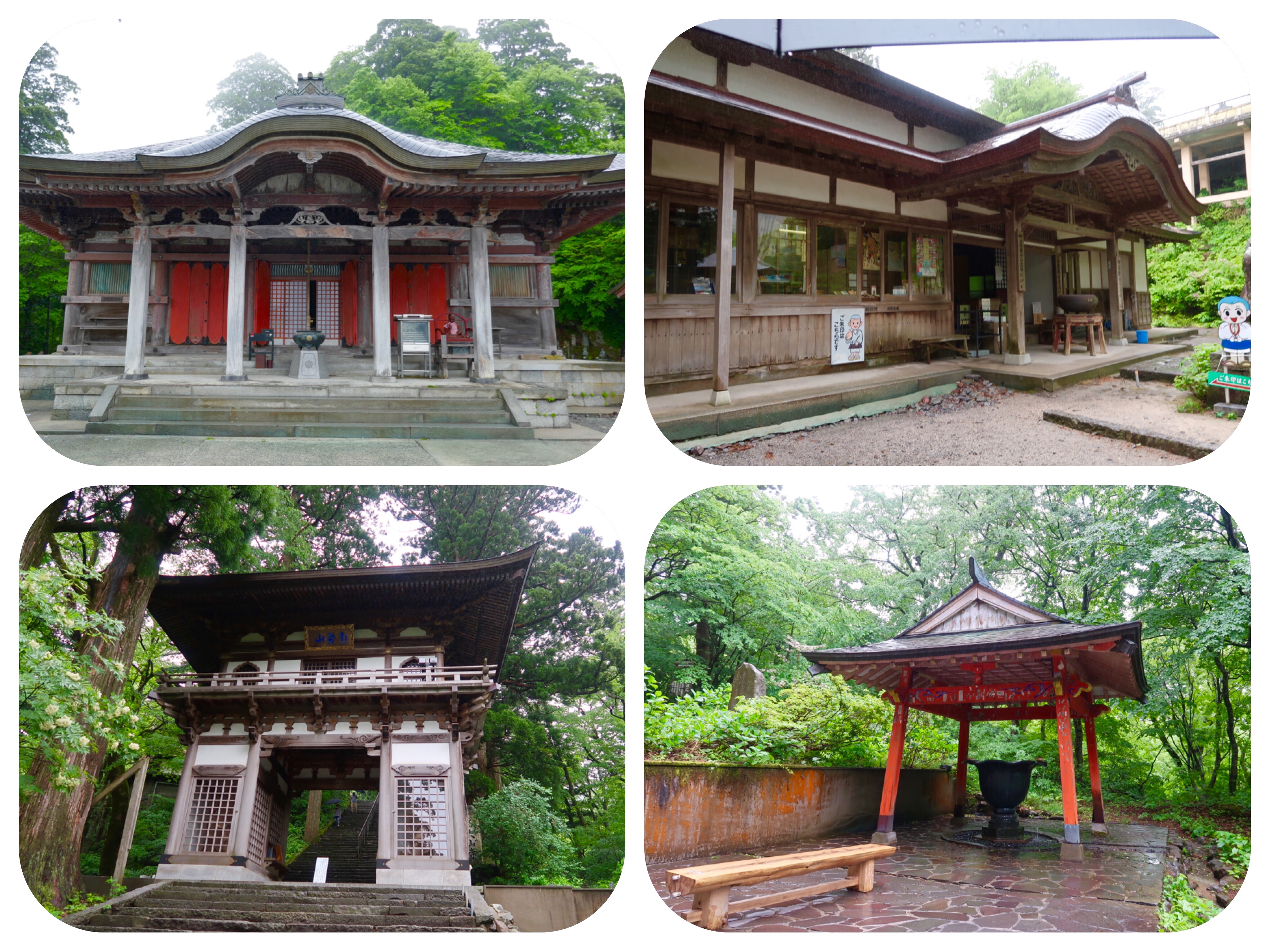 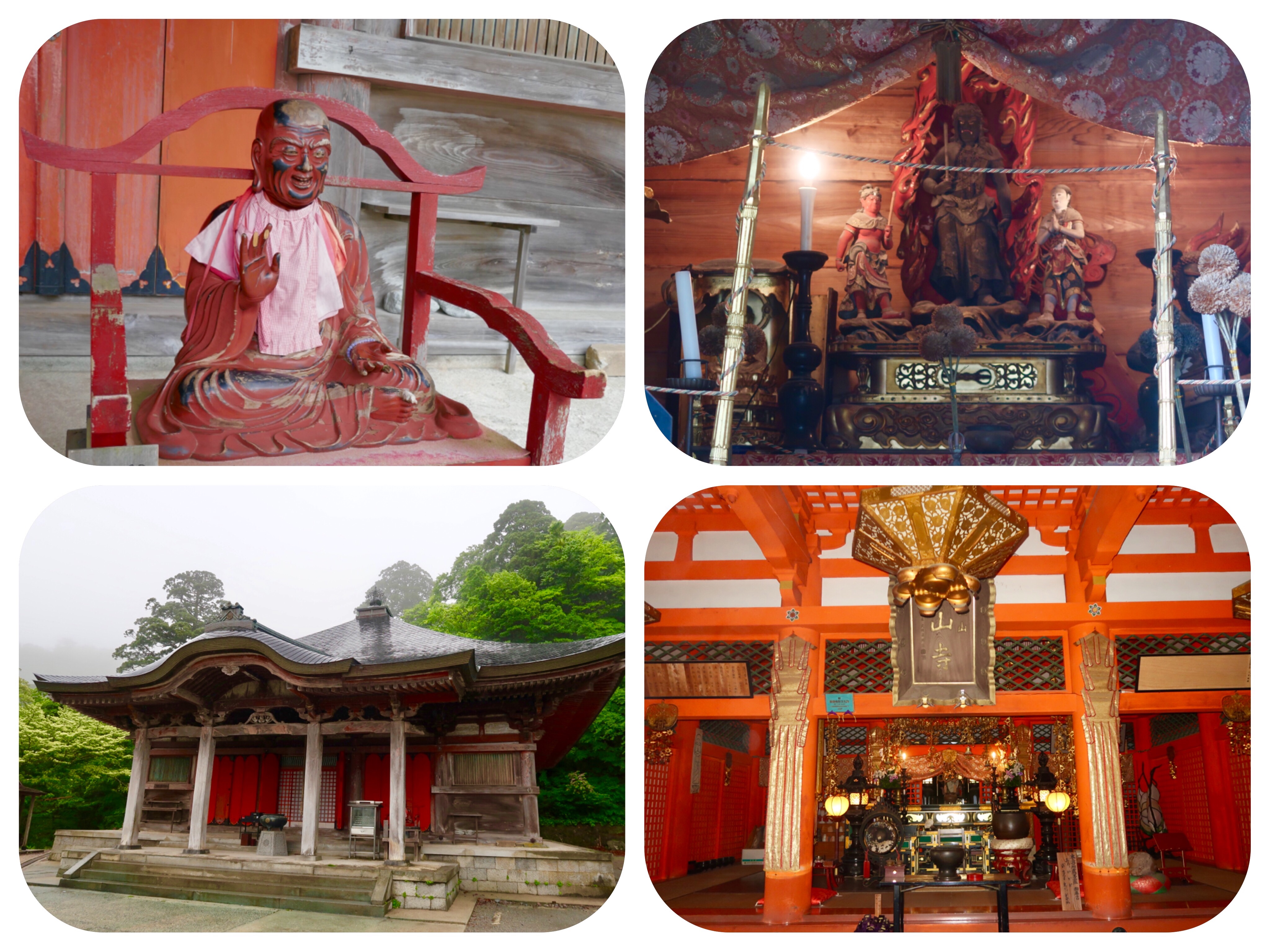 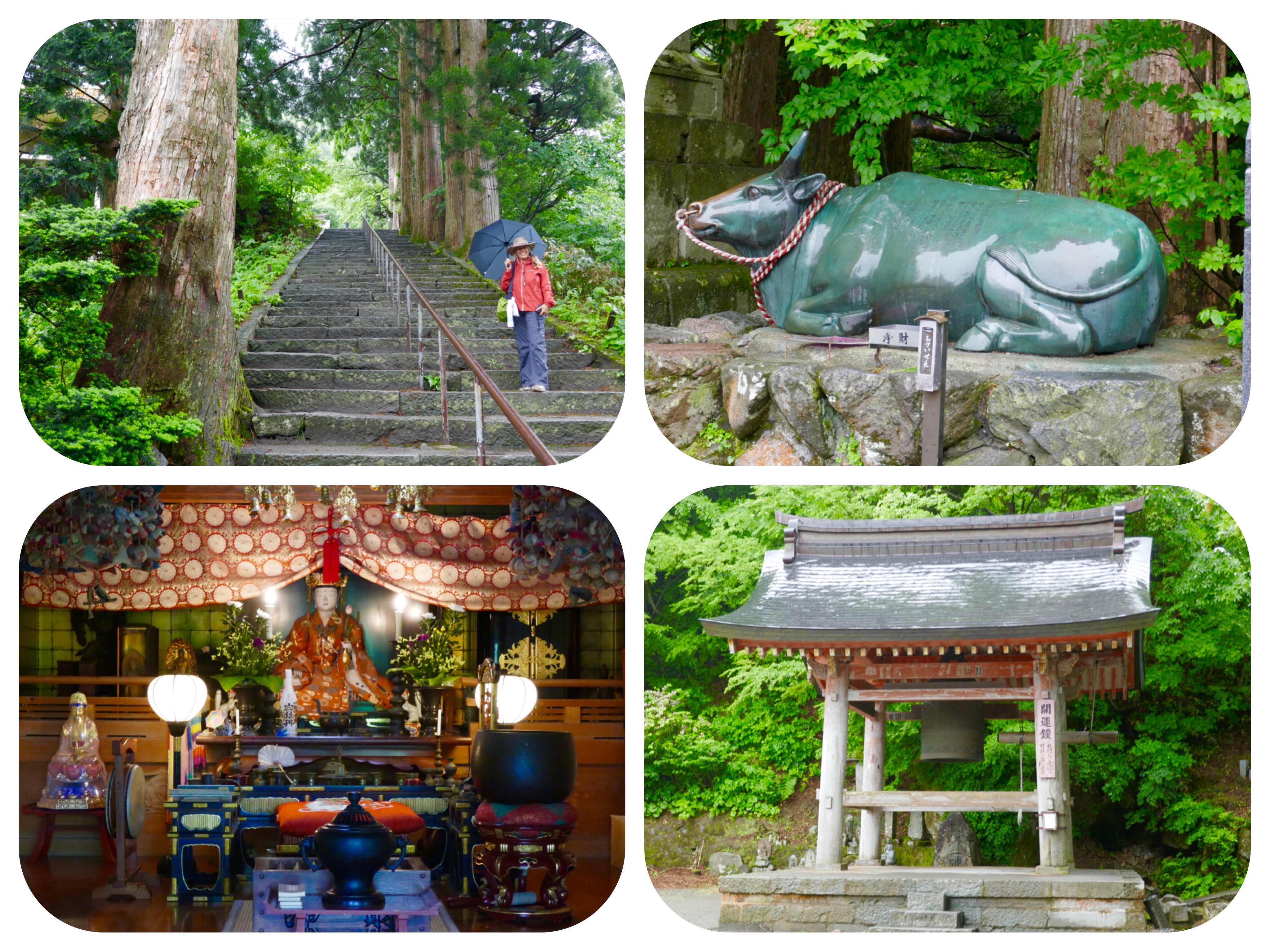 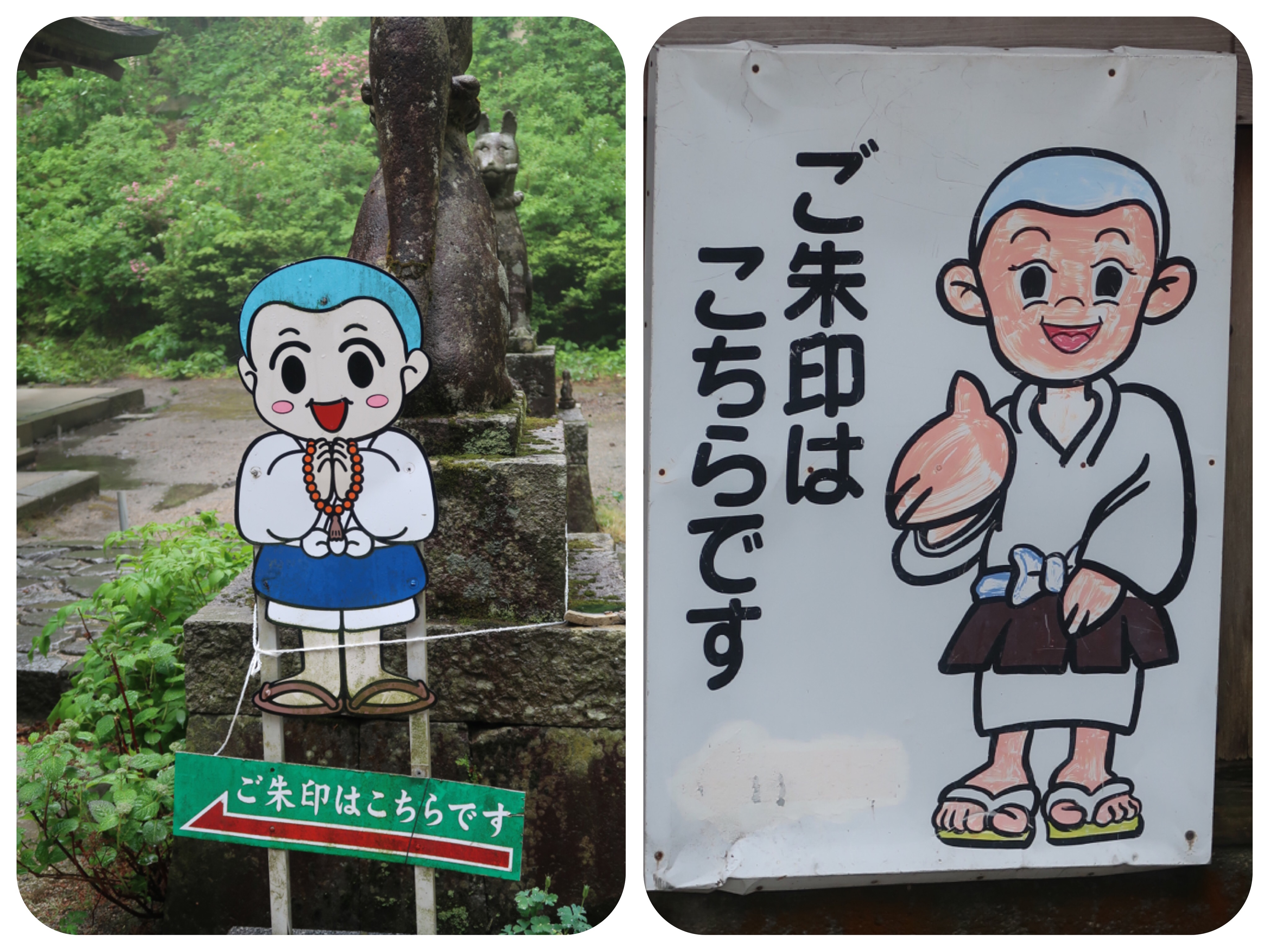 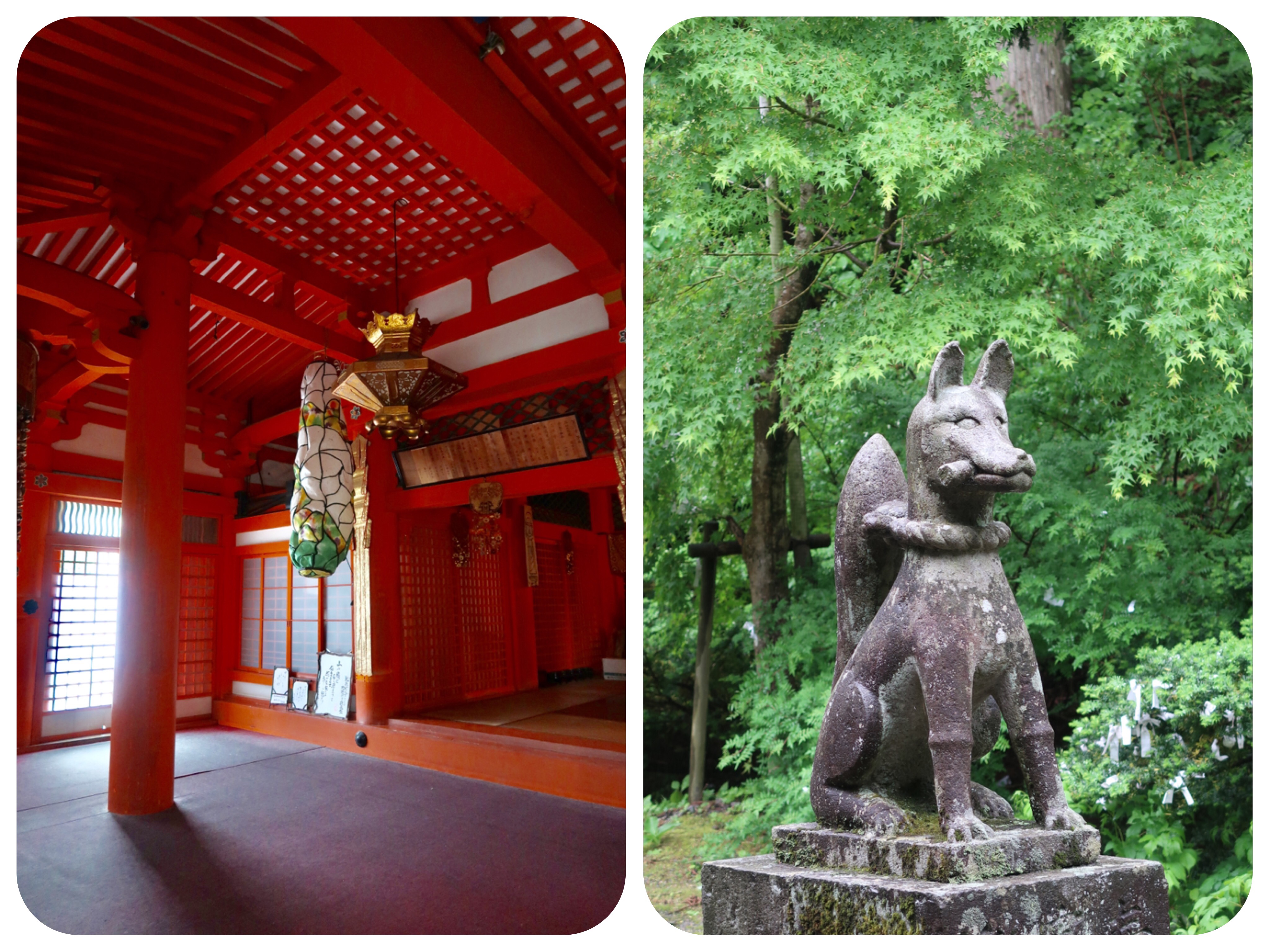 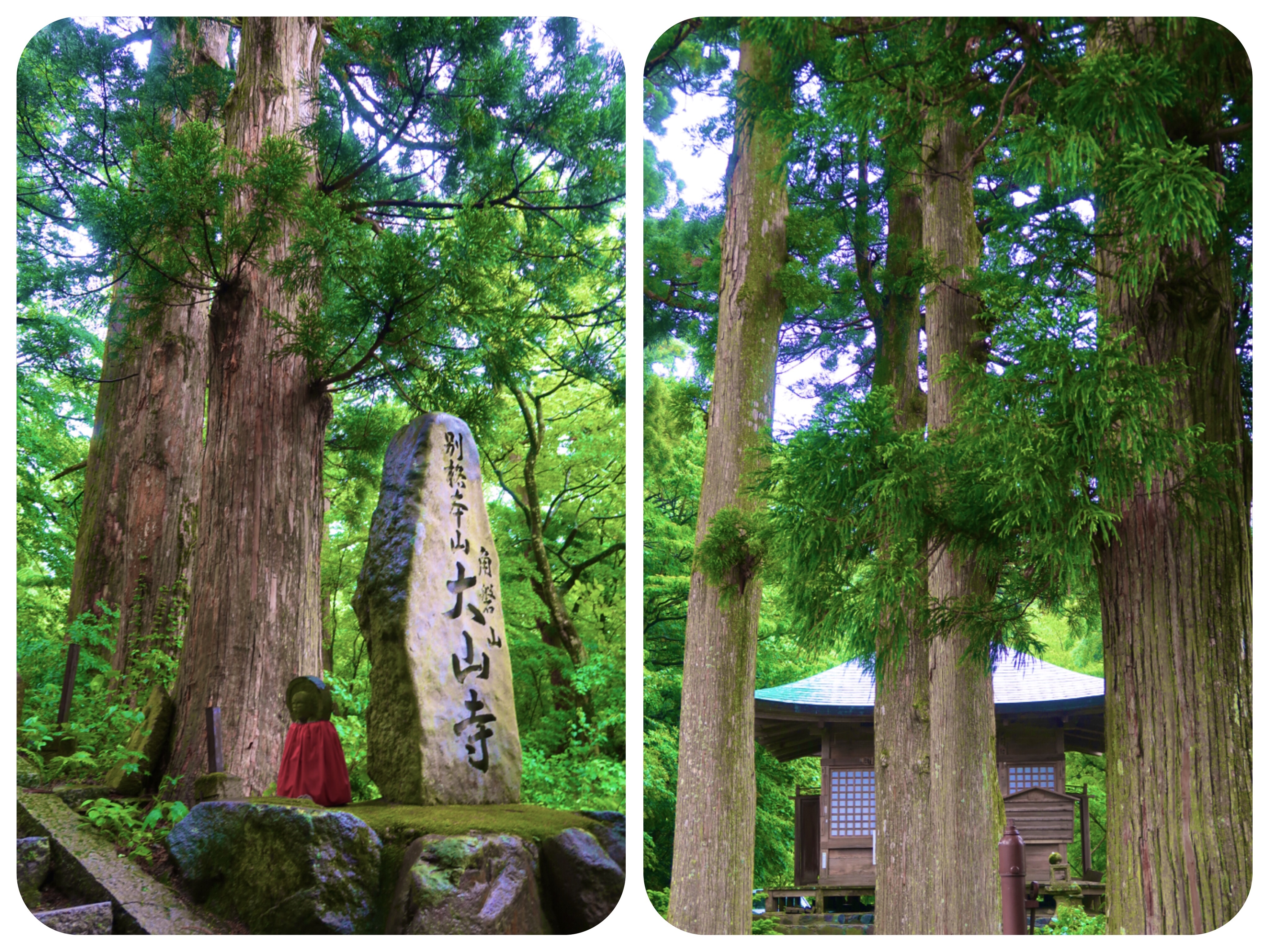 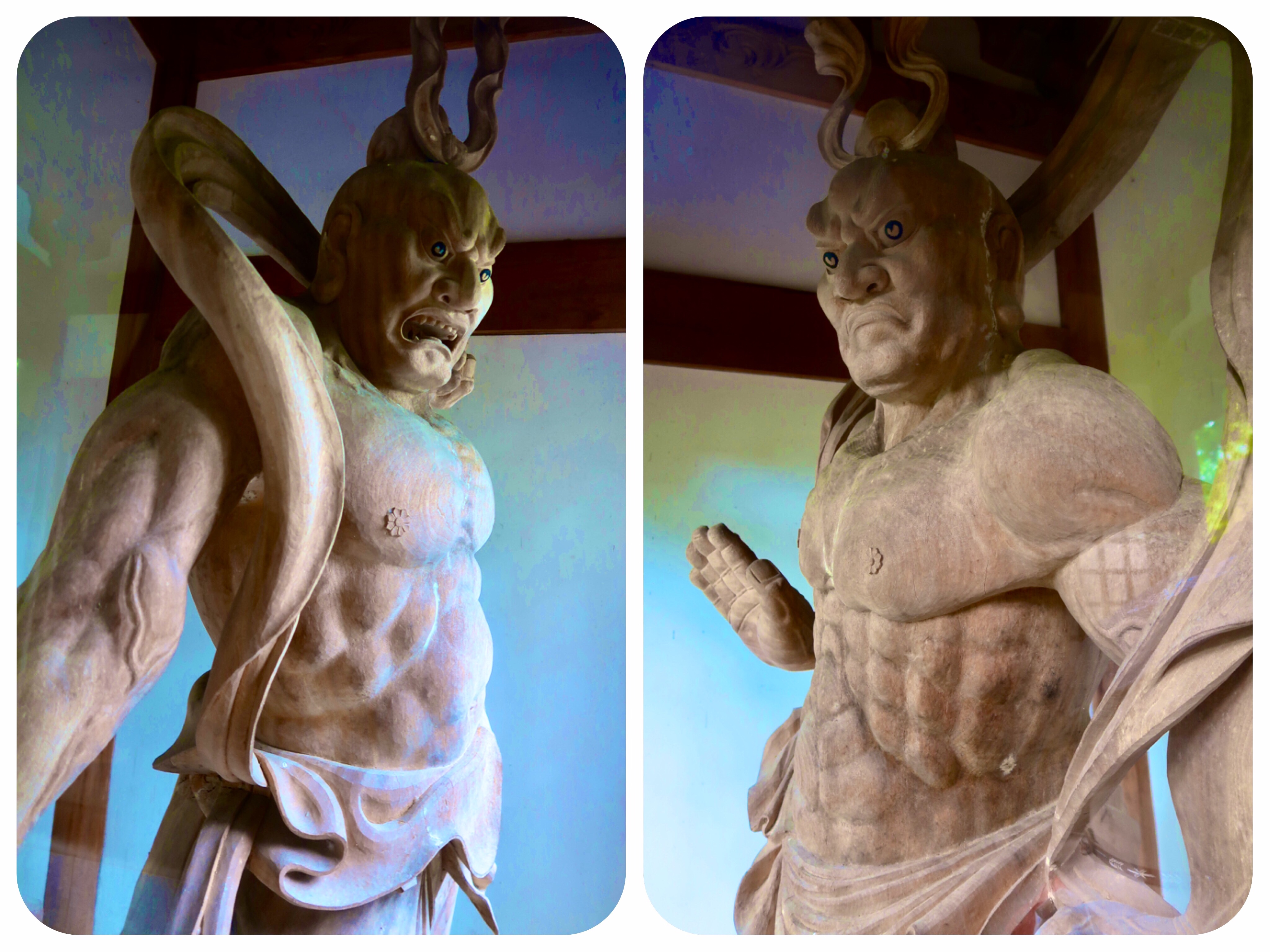 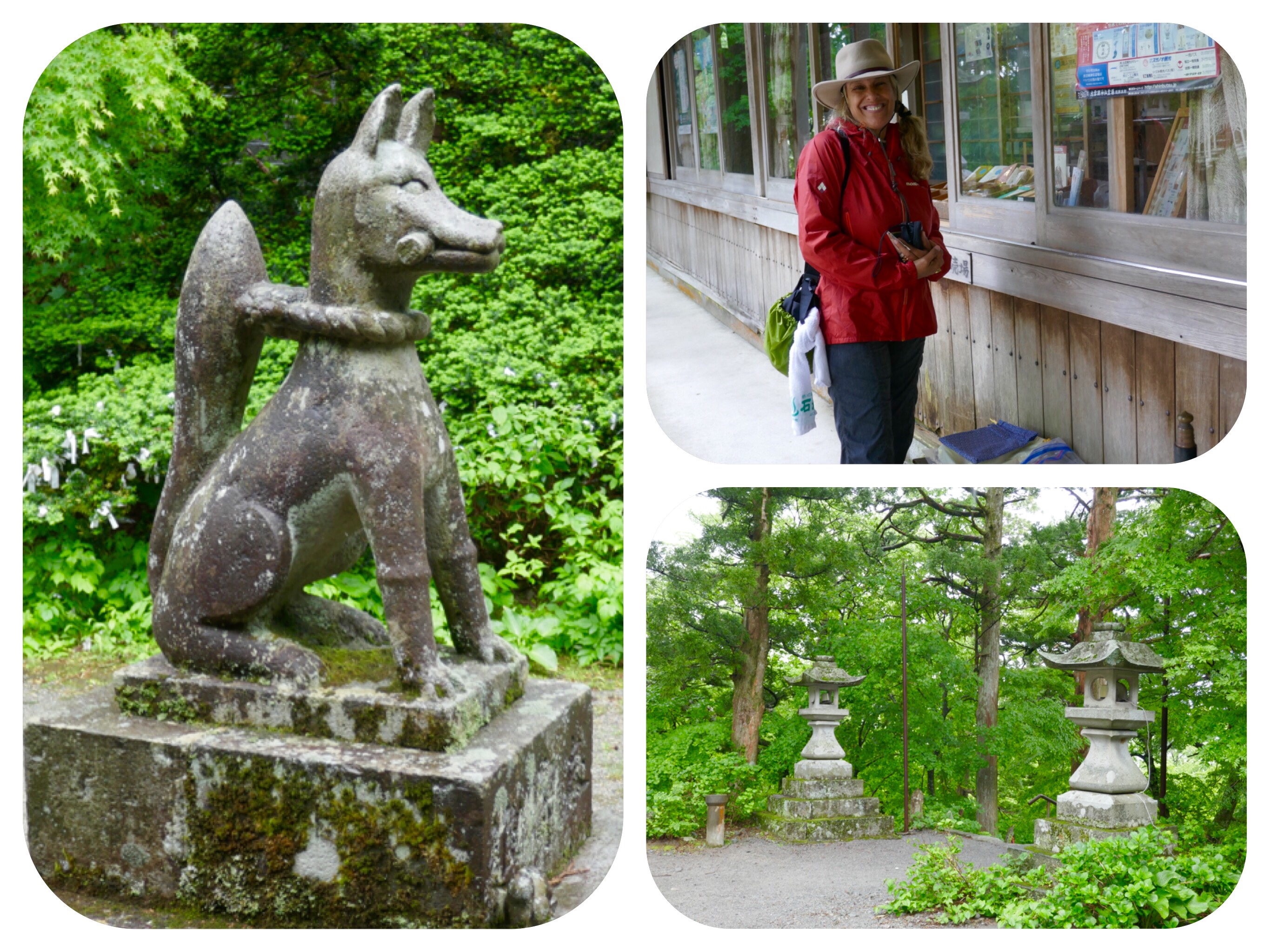 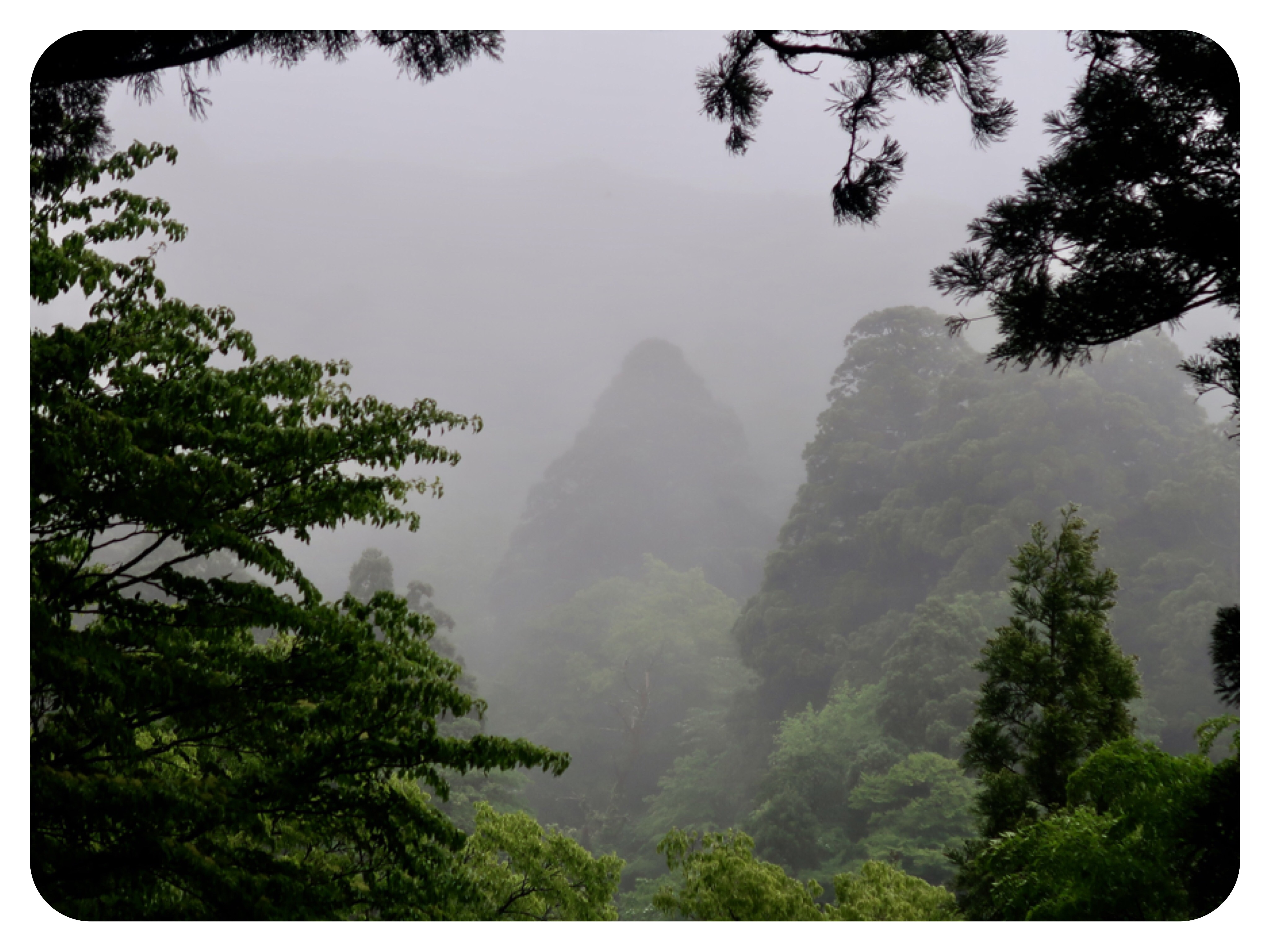 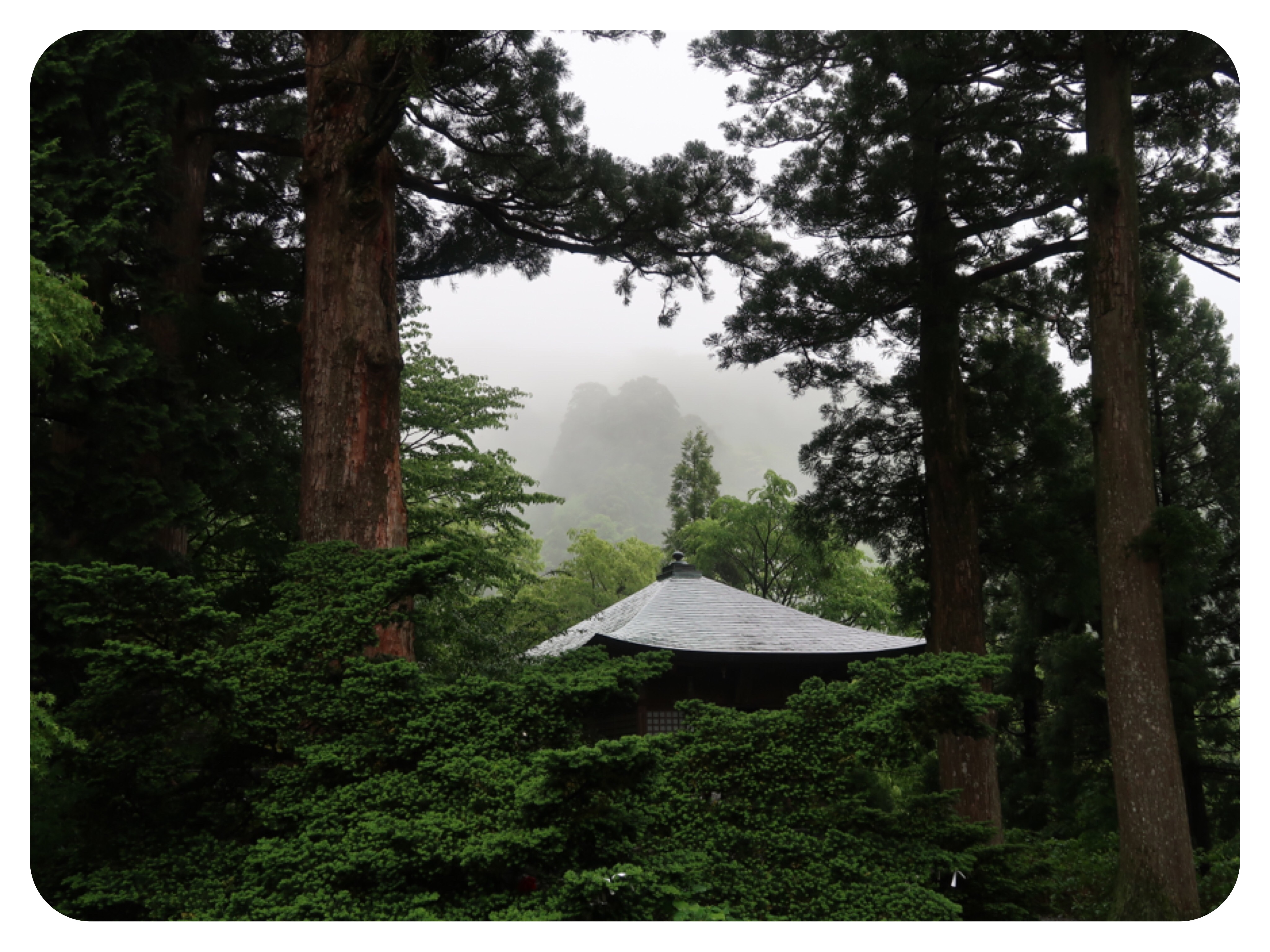 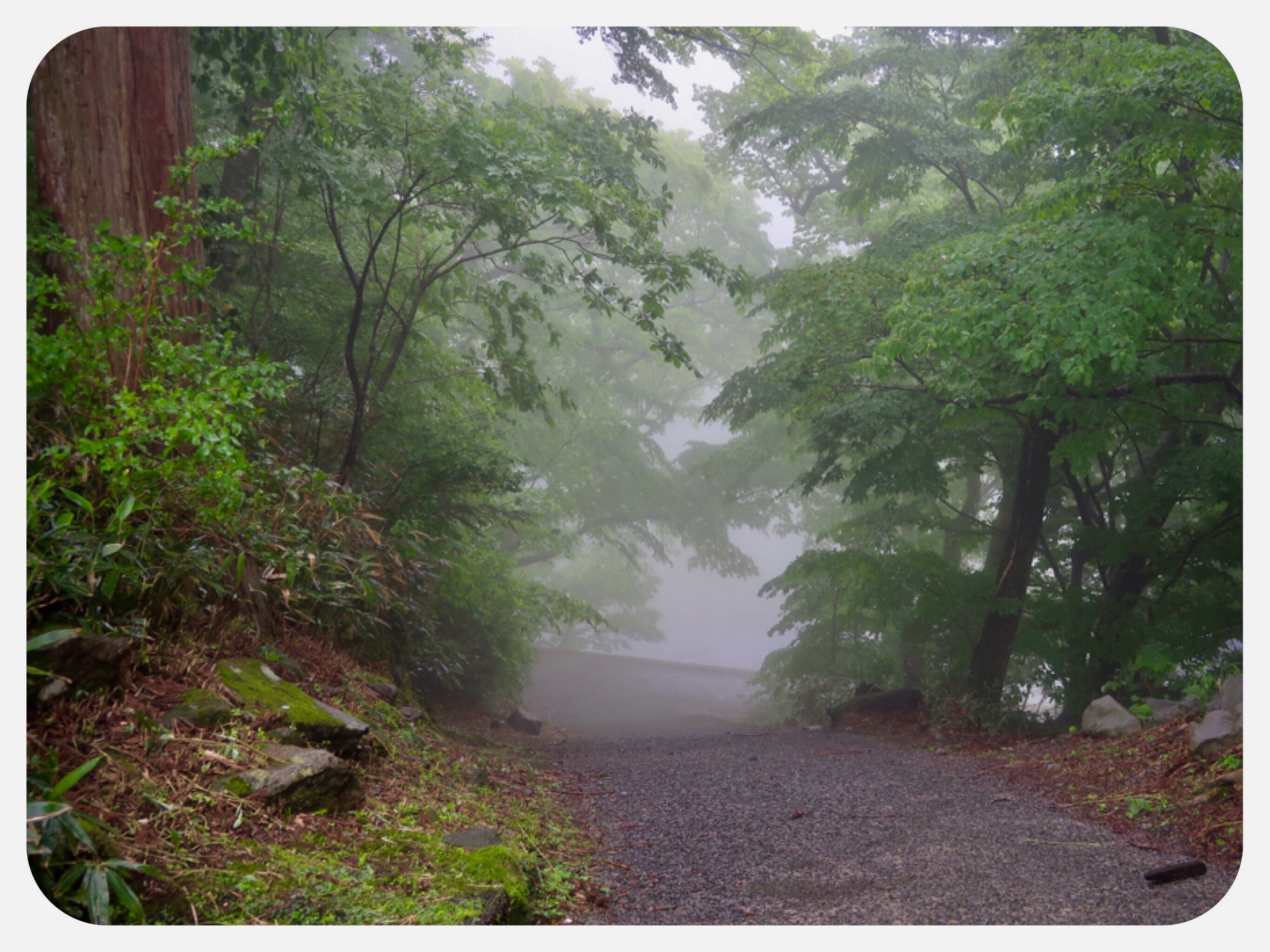 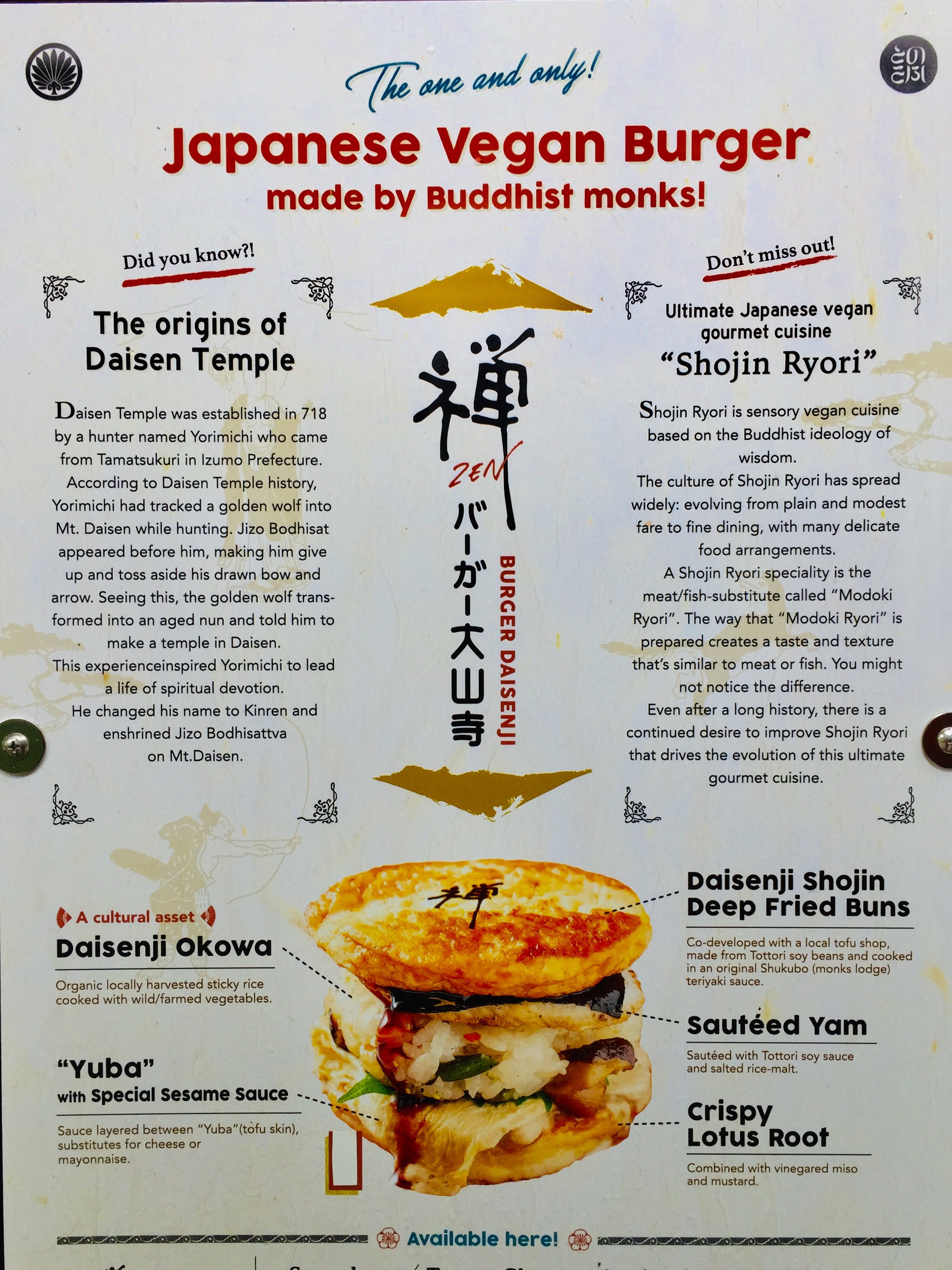 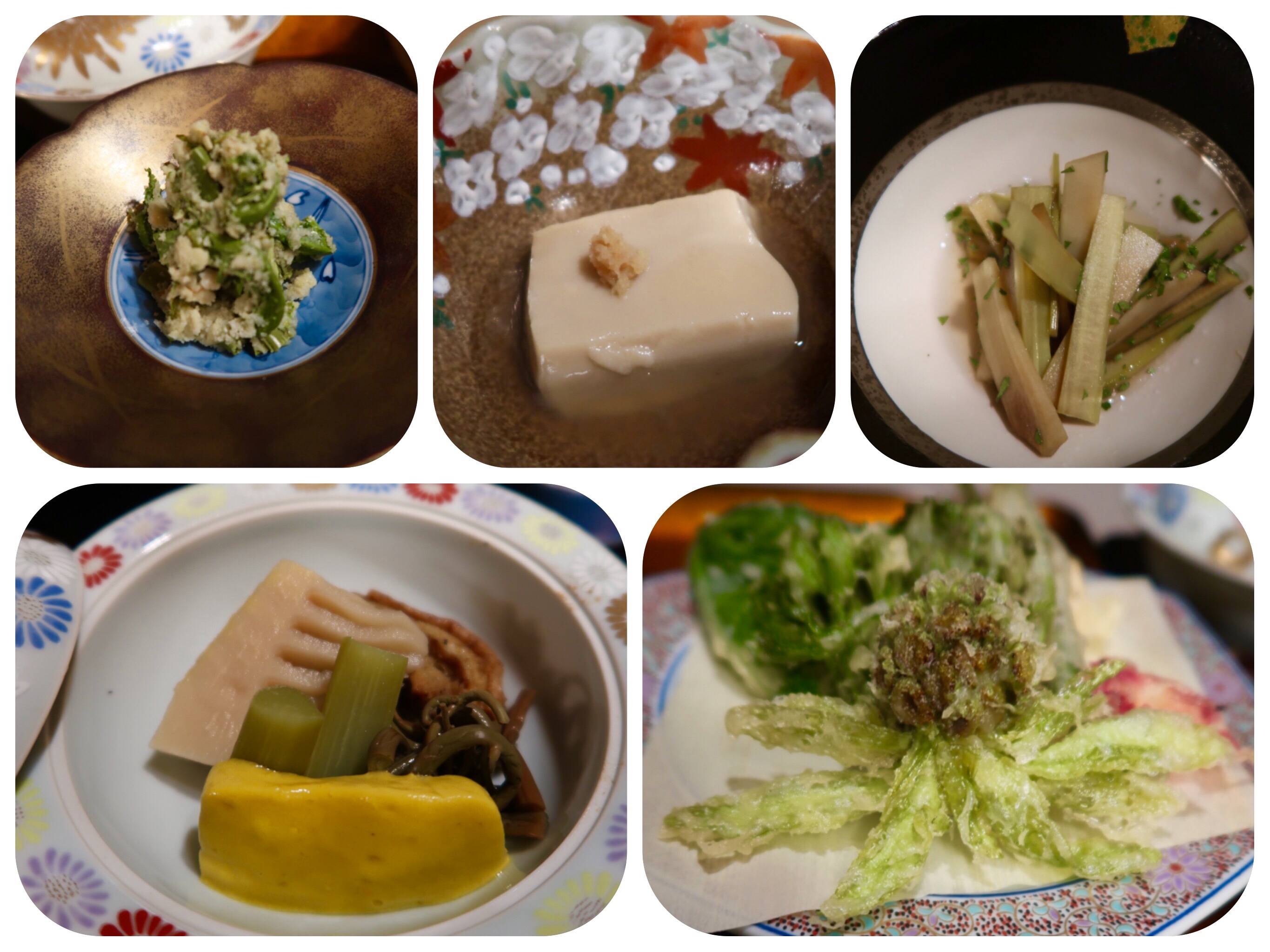 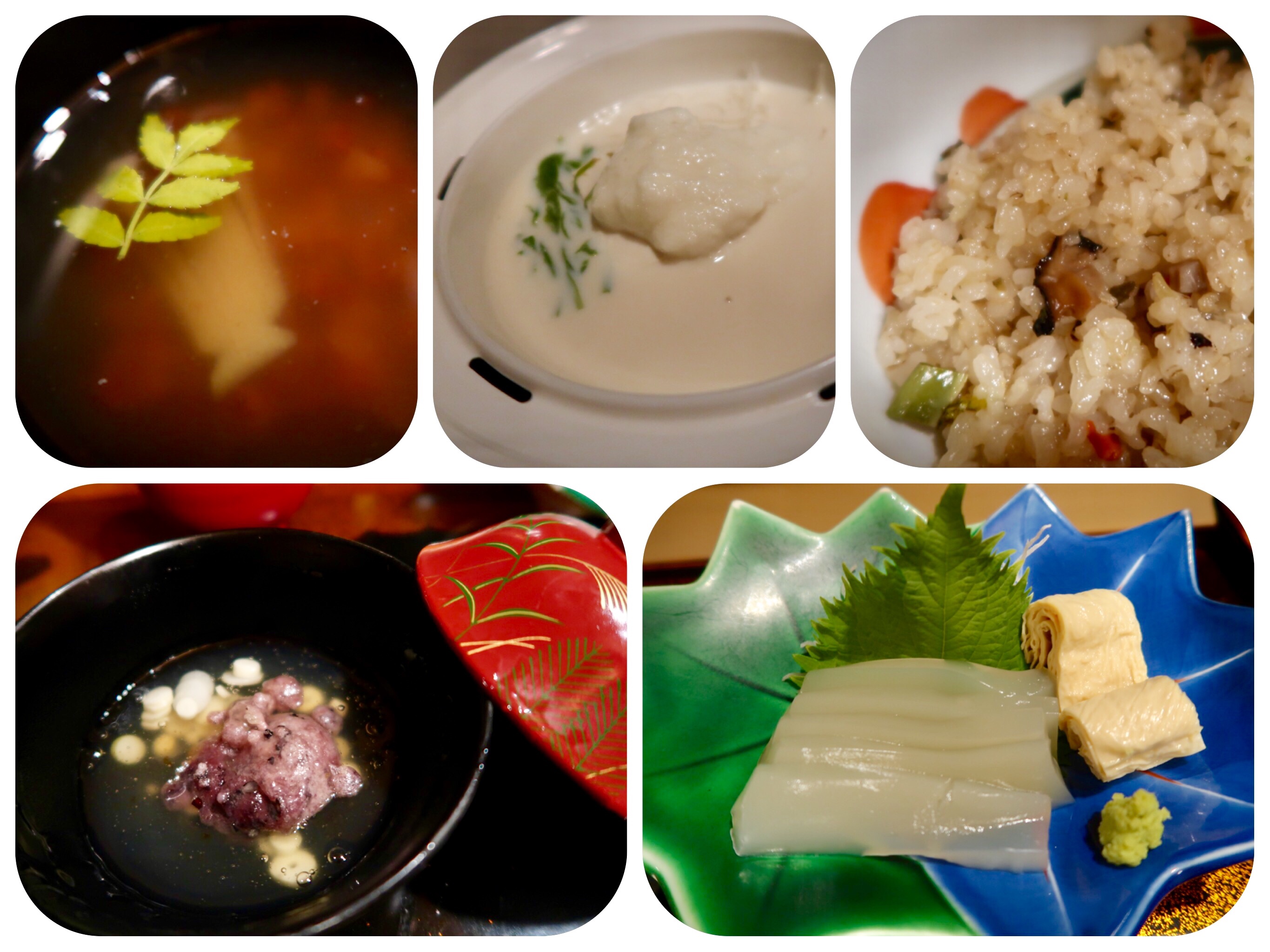 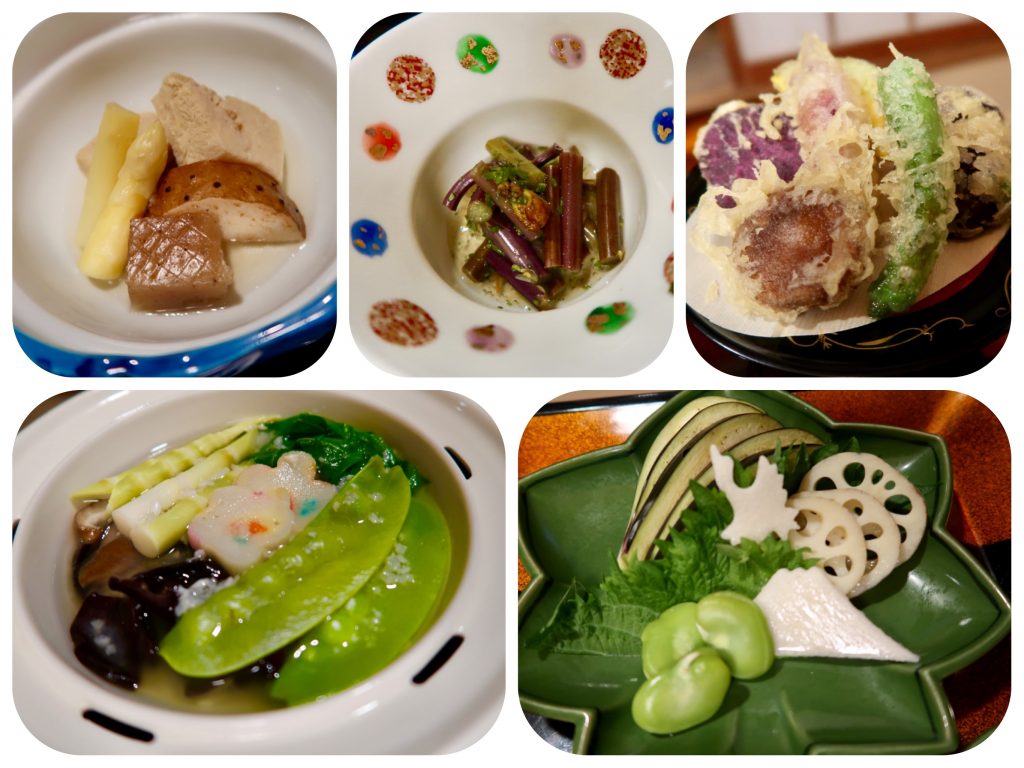 Day 53- The Chūgoku 33 Temple Kannon Pilgrimage, Japan – Temple #29, Daisenji, and a Bit About Food and Its Vibrational Aid To Your Divinity

This morning we woke up to a very rainy day.
The heatwave had broken overnight and temperatures plummeted, to result in a very cool morning.

In order to allow ourselves plenty of time to climb the thousand meters from sea level, up to Daisenji temple, we had asked for an early breakfast.

A taxi was waiting for us to take us to Yasugi station, so we could catch the early train to Daisenji-Guchi.

We had already walked this route, so we were just returning to our last point reached on the trail.
We planned on walking from Daisenji-Guchi up to Daisenji Temple, located on Mt. Daisen.

Daisenji, temple #29, is the biggest Nansho temple on our pilgrimage.
It is also the highest peak in the Chūgoku region, and a much beloved hiking destination.

Mount Daisen is a 5643 foot tall mountain (1,729 meters above sea level), and when we approached it from the west, it looked a little like Mount Fuji-San, with only a single peak.

In fact, when it became a National Park in 1936, it was called Hoki-Fuji because it looked so similar to Mount Fuji.

But when you looked at the mountain from the south or from the east, it no longer resembled Mt. Fuji.
It looked like a big mountain range with lots of smaller peaks.

When we got off the train, we saw no mountain at all.
The peaks were covered in mist, and heavy rain made it difficult to see ten meters in front of us.

It was also freezing cold.
Even dressed in our raincoats with balaclavas around our necks, we were very cold.
It was hard to believe that just the day before there was a heatwave across Japan so intense that several people had died.

Sometimes in life….. you’ve got to accept that there is another plan, that might be better than what you had planned.

The only bus leaving for Daisenji that morning was still parked in front of the station.
Wet and cold, we boarded the bus.

If we had missed this bus, we would have had to walk in the heavy rains, because the next bus left at 15:30 in the afternoon.

From the bus, we could see the road we had planned to walk on.
It was very steep and had no sidewalks for most of the way.
Visibility was very low because of the pouring rain, and it would have made walking along the narrow car road pretty dangerous.

We felt a little guilty for taking the bus after so much planning to walk up, but it really was the safest choice.

There was a very small village on the mountain, that mostly catered to hikers who come to hike to the summits.

There were a few shops, two cafes and a handful of restaurants.
Mont-bell, the Japanese outdoor gear company, has a big store in the village.

Our guesthouse for the night was a temple lodging located next to Daisenji temple.

It seemed like the village came alive on weekends, when hikers come to summit the mountain.
On this cold and rainy day there were no hikers, and only one bakery cafe was open.
We sat there until noon, hoping that the rain would subside before we visited the temple.

Daisenji temple is located at the end of the Main Street of the village, right bellow the Ohamiyama Shinto Shrine.

It is an historic temple that was founded in the year 718, on the Region’s highest mountain.
The founder of the temple was a hunter, who was chasing a golden wolf in the woods.
The golden wolf was transformed into a Buddhist nun, and she instructed the hunter to establish a temple at this location.

During the temple’s golden age in the Heian Era, Mt. Daisen housed over one hundred temples and more than 3,000 monks.

It is now one of only four temples that remain on the mountain.

The main hall of the ancient temple was restored in 1951, after being mostly destroyed by fire in 1928.

Daisen-ji has a small treasure house, which is like a small museum, displaying a selection of Kannon statues, Buddhist art and important artifacts spanning the Hakuhou period to the Kamakura.

If you plan to visit, take notice that the temple is only open from April-November.
Even though many hikers come to climb during winter, the temple is closed.

After visiting the temple and doing our prayers and chanting, we got our pilgrim’s book and scroll stamped, chatted with the priest and sat to have a late lunch in the vegetarian cafe that is also owned by the Shukubo temple lodging at which we are staying.

The lunch was a vegan “Daisenji burger,” which was invented in the area.
The bun is made of fried tofu, from soybeans grown in nearby Tottori.
There is also a slice of yam sautéed in locally brewed soy sauce and salted rice malt, locally grown sticky rice cooked with mountain vegetables, and yuba (tofu skin) in sesame sauce.
It was delicious.

The Shukubo is fairly large and a bit run down from age, but it is full of charm and character and it is able to host a large number of visitors, especially since many Japanese share one or two big tatami mat rooms when traveling in groups.

The hot baths are spacious and comfy and helped warm our cold bodies.
It really is amazing how we went from sweating to cold in one day, but tomorrow is scheduled to be hot again and sunny.

The highlight of our stay was the dinner.
We passed by the main family shrine on our way to dinner.
We were seated in a private room in front of the illuminated garden.

The vegetables were all mountain vegetables, including ferns, leaves and flowering plants.
There were lots of interesting dishes, and more food than we were able to eat.
It felt almost rude not to eat all these well prepared and well presented dishes, but we simply couldn’t eat it all.

I was reflecting about our relationship with food.
Food is not about loving yourself, compensating for emotional lacks, or calories consumed.

It is about energy consumed, but not energy as a means of giving our bodies the nutrition they need to create energy for our movement, but rather, food is about vibrational energy.

Allow me to explain….
We are all natural Creators.
We are creating all of the time.
It is now the time on our planet that we journey to discover how to create consciously, rather than unconsciously.

When eating food, we are aligning our energies with the vibrational qualities of the earth.
Eating lighter food in the form of fruit, vegetables, grains, beans and minerals, is consuming the highest vibrational food.

Before you eat a meal, silently say to the food you are about to eat: “Thank you!
You are a support to my Divine system.
I expect you to support my Divinity, including my health and well-being on all levels.
All that is whole and good, I welcome with gratitude.
All that is toxic or not needed by my body, I now release.”

You can invent your own way or words to express the same idea.

Food is not a matter merely of calories or fat versus carbohydrates.
Those commonly held but wrong ideas distract from the central truth of the matter, which is:

– What is the vibrational quality of what you are about to eat?

– Does it match your own naturally high vibrations, and the vibrations of that which you are quickly becoming?
– Remember that you are a divine Being who is developing your Crystalline Light-body.

– How are you receiving this food? Are you in a relaxed state, concentrating on the aesthetics and each flavor of the food, blessing it with your full attention and intentions and declaring that only what is needed for your nutritional best shall remain with you, and that all else shall quickly dissolve?
–
Anyway…. just some “Food for thoughts”……

With love and deliciousness,
Tali

Total distance walked on the pilgrimage so far: 1057 Kilometers