Day 18 – The Chūgoku 33 Temple Kannon Pilgrimage, Japan – Yanai to Hikari, and a Visit to the Golden Dragon Temple Hanya-ji on Shinpozan Mountain 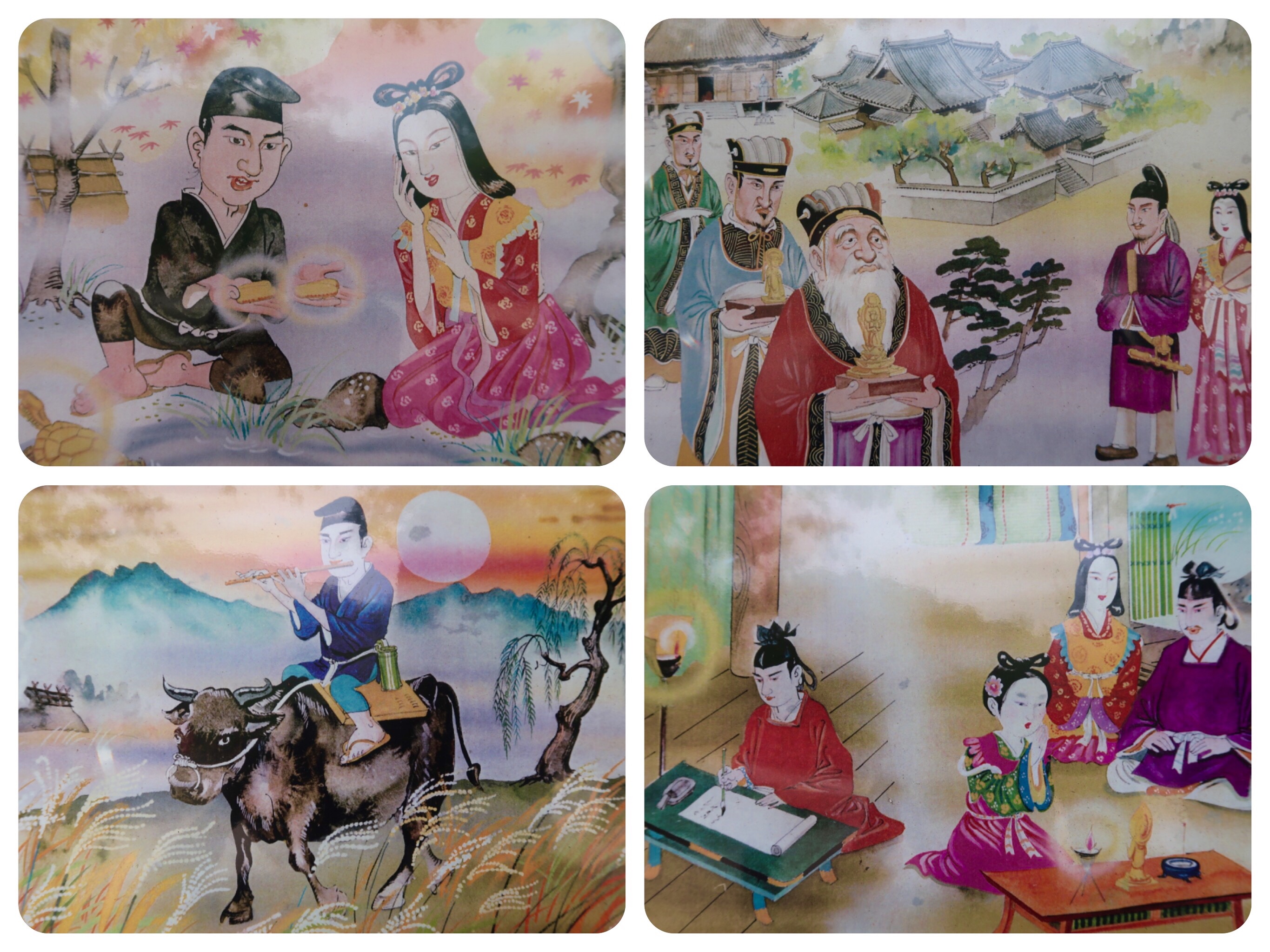 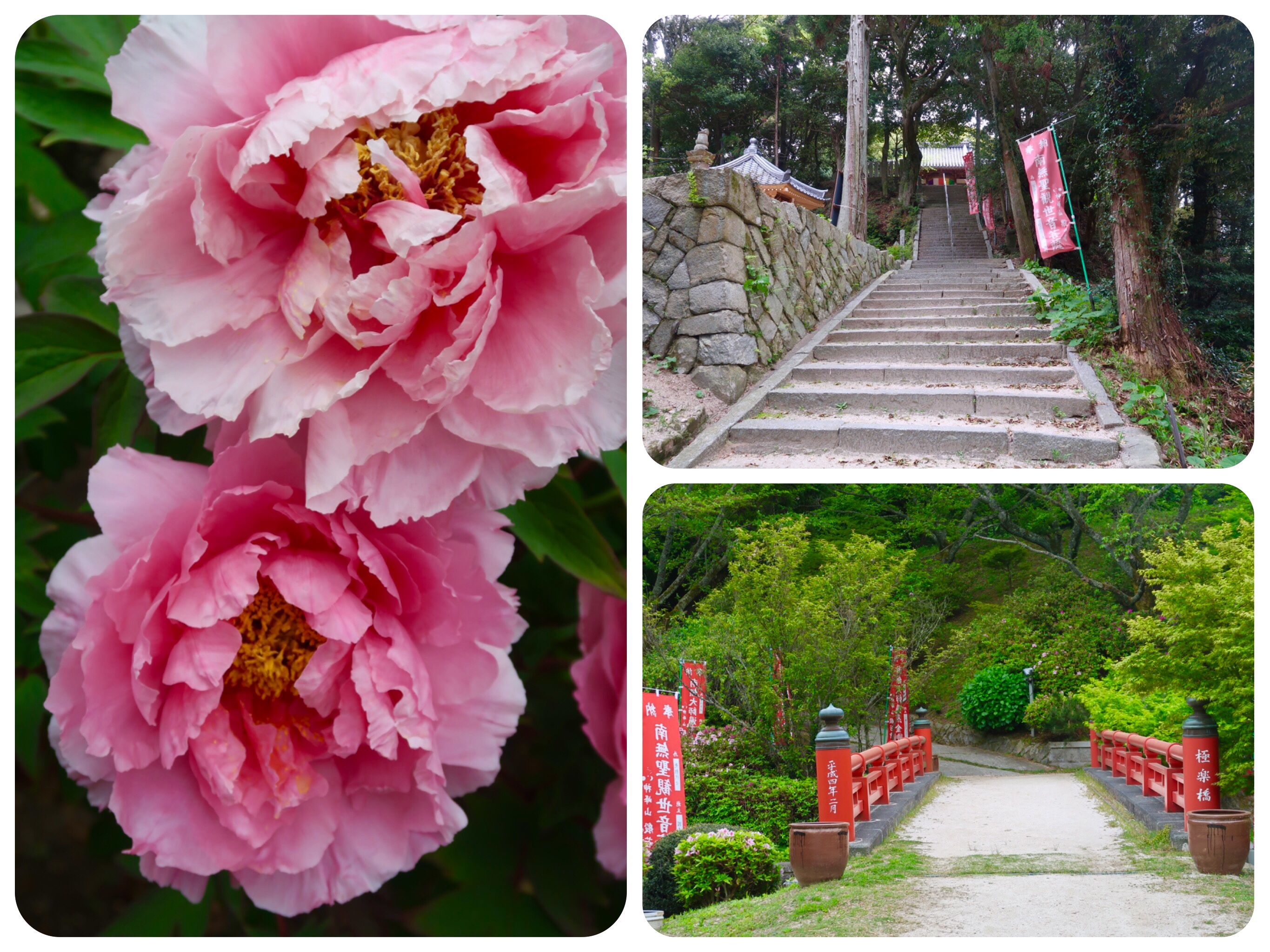 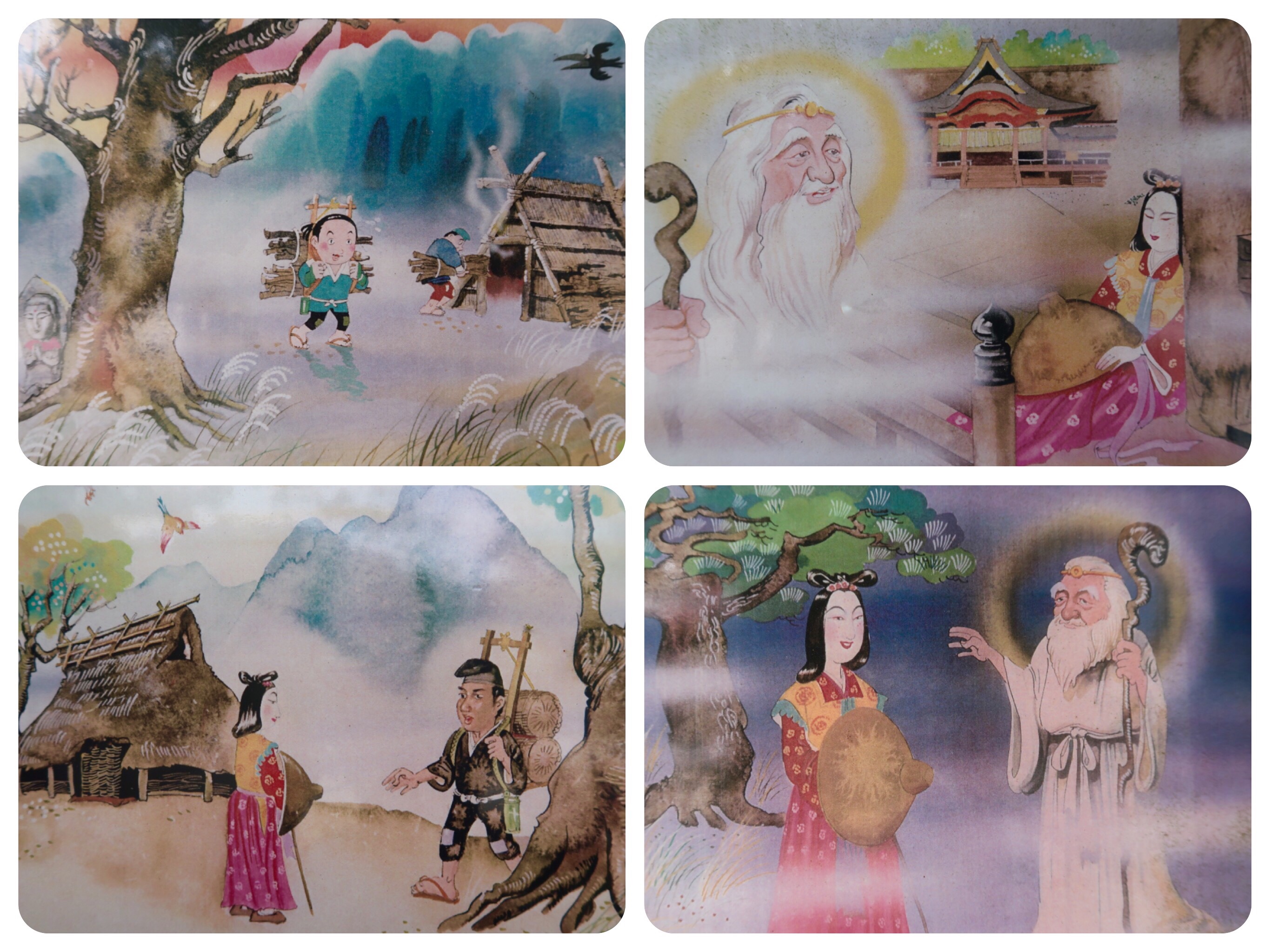 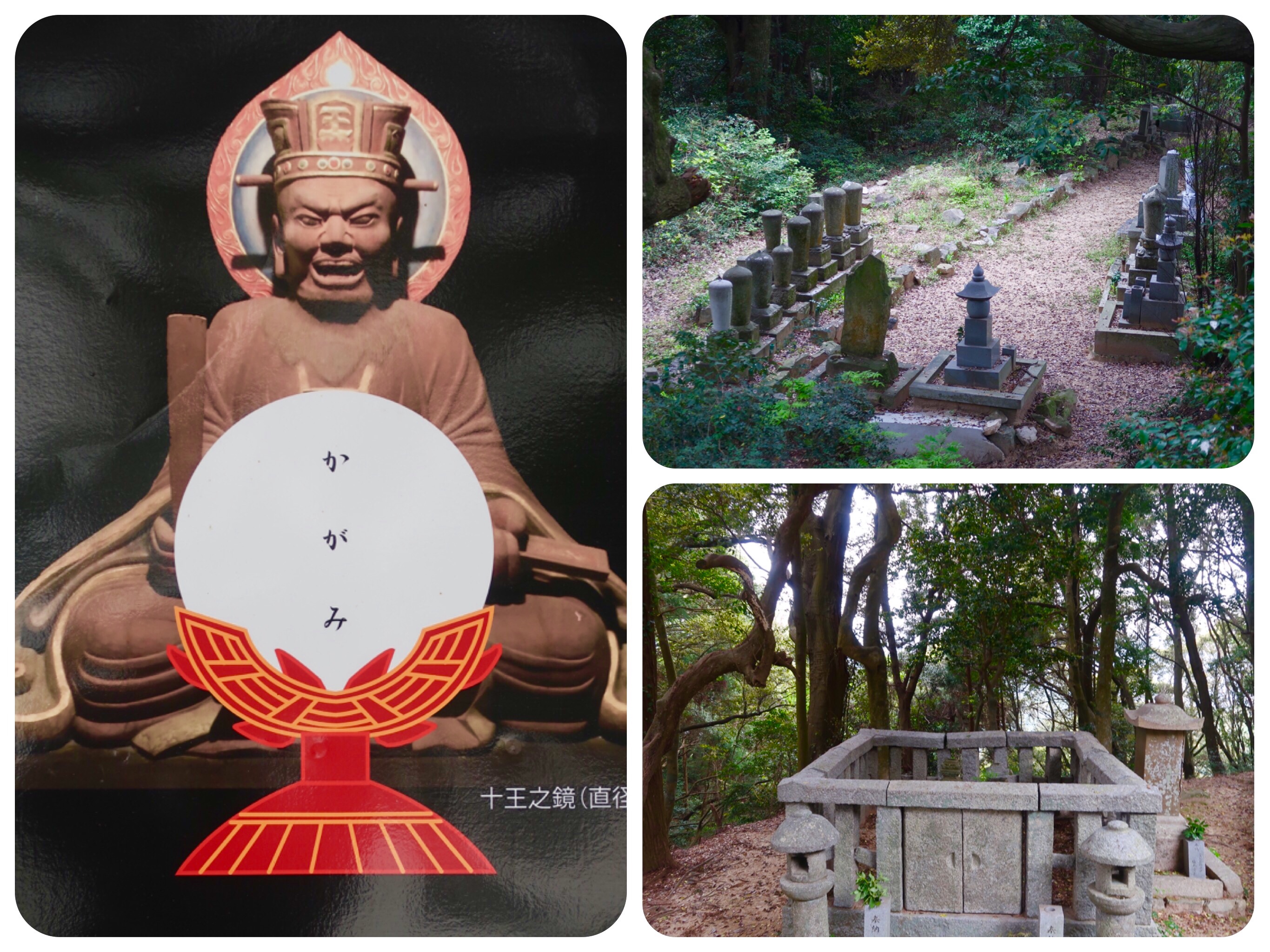 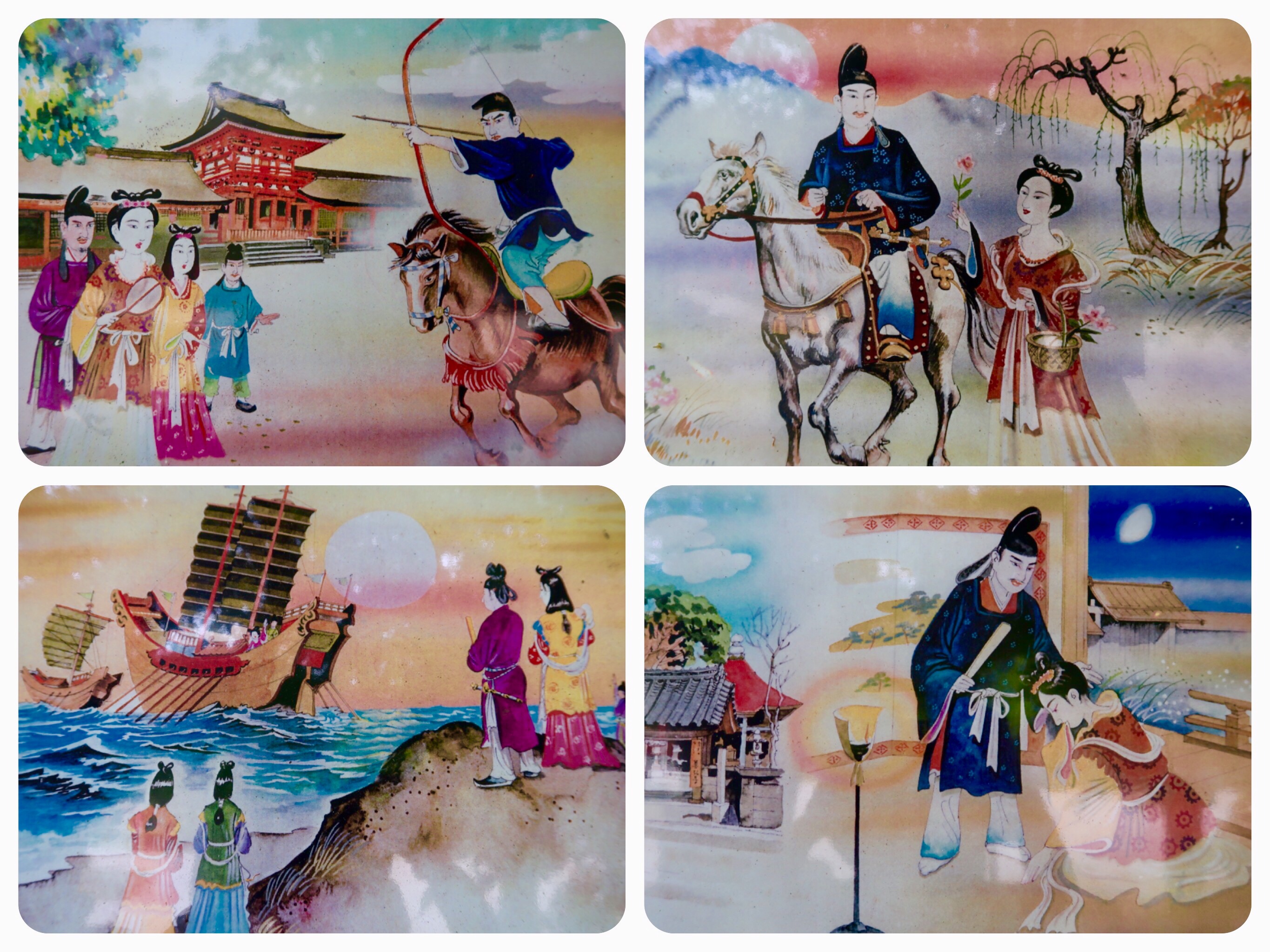 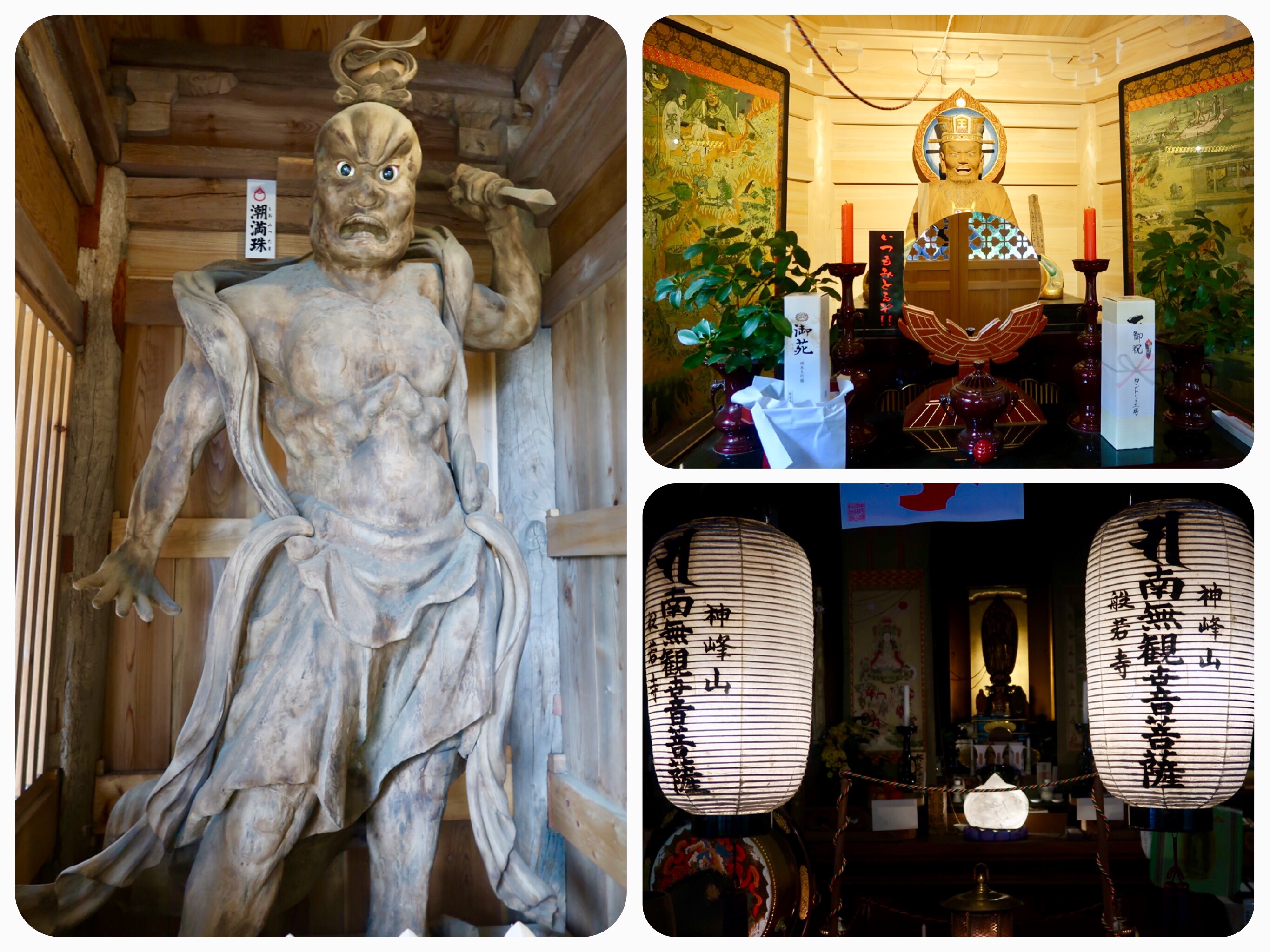 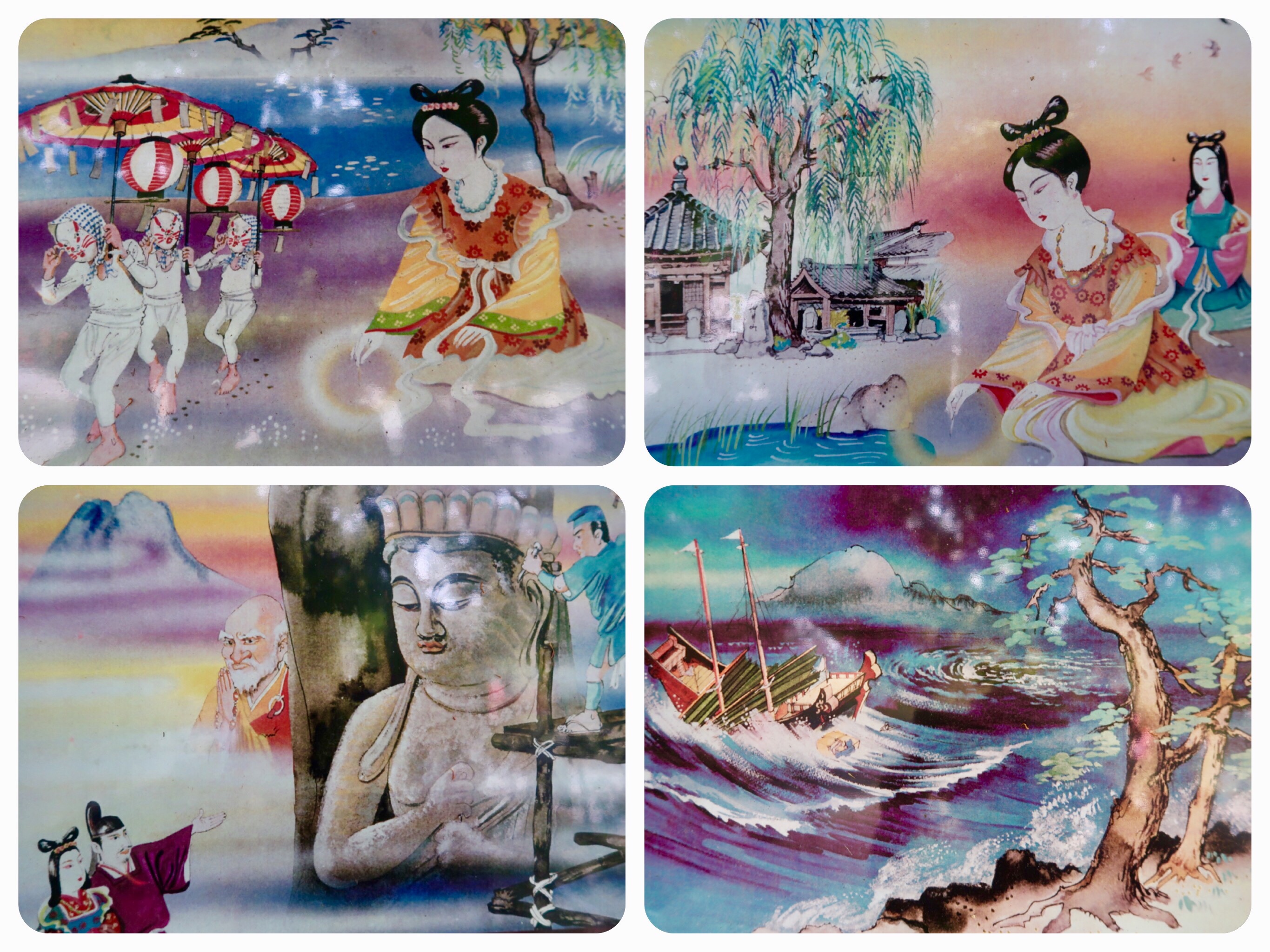 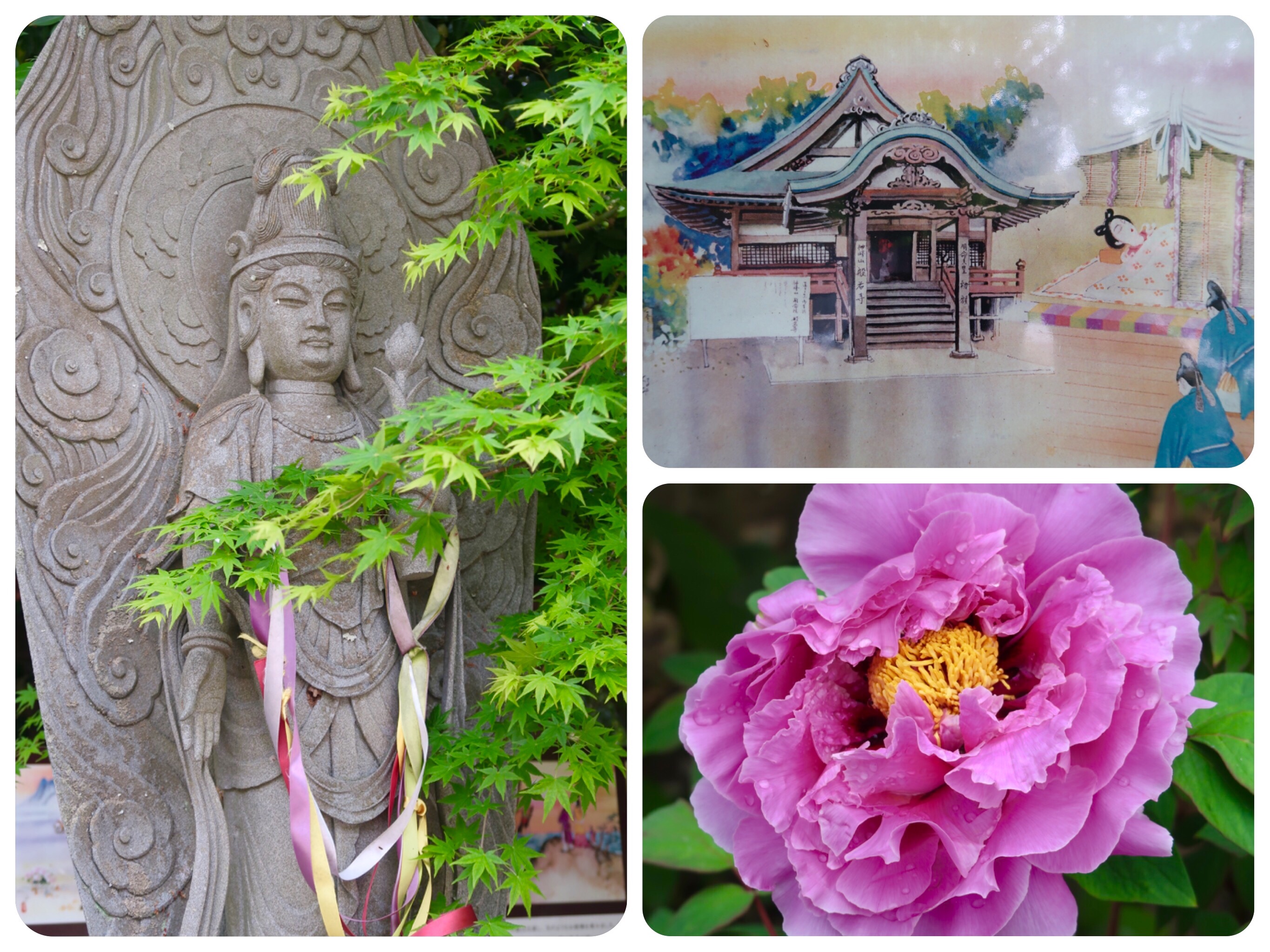 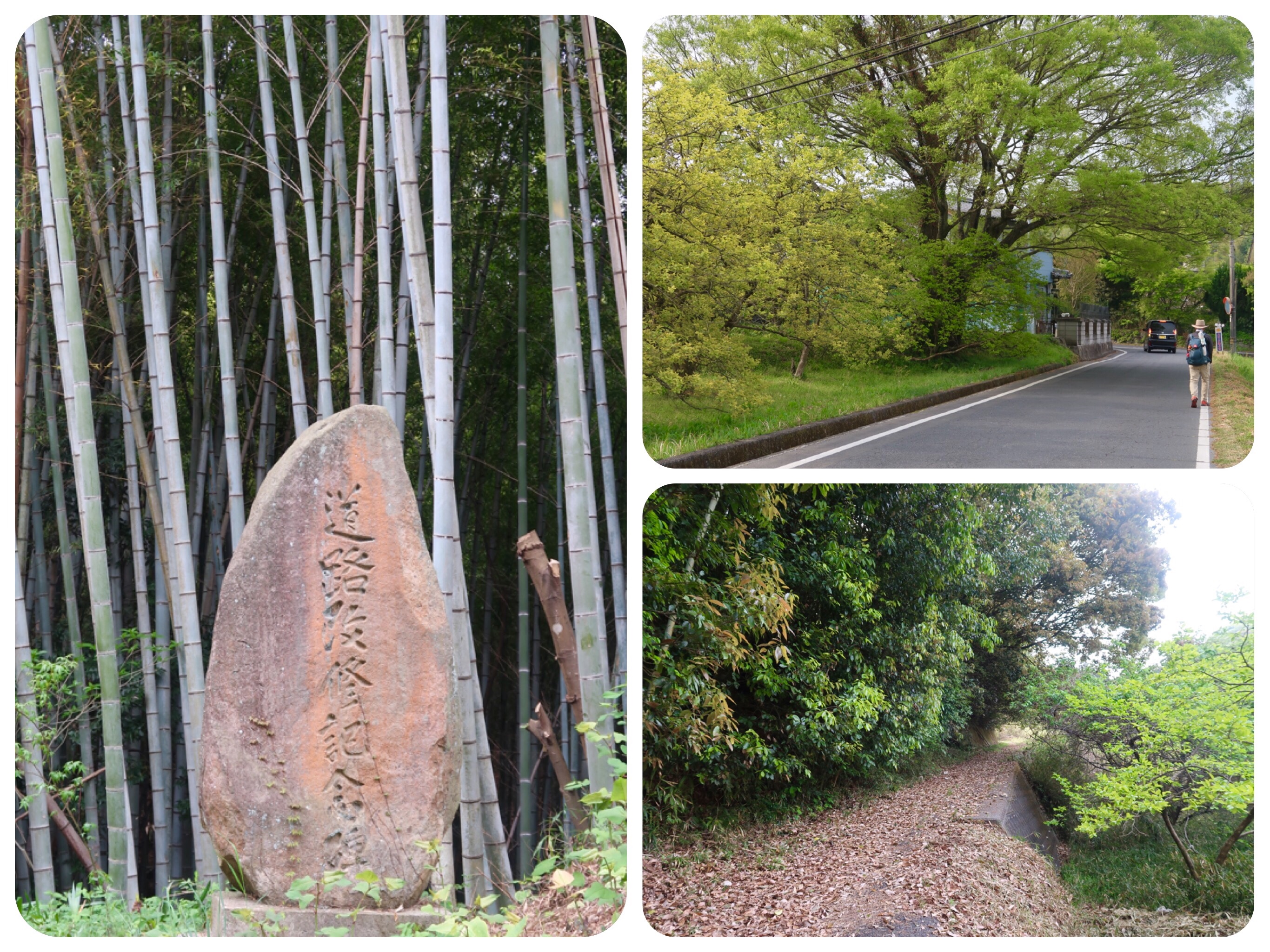 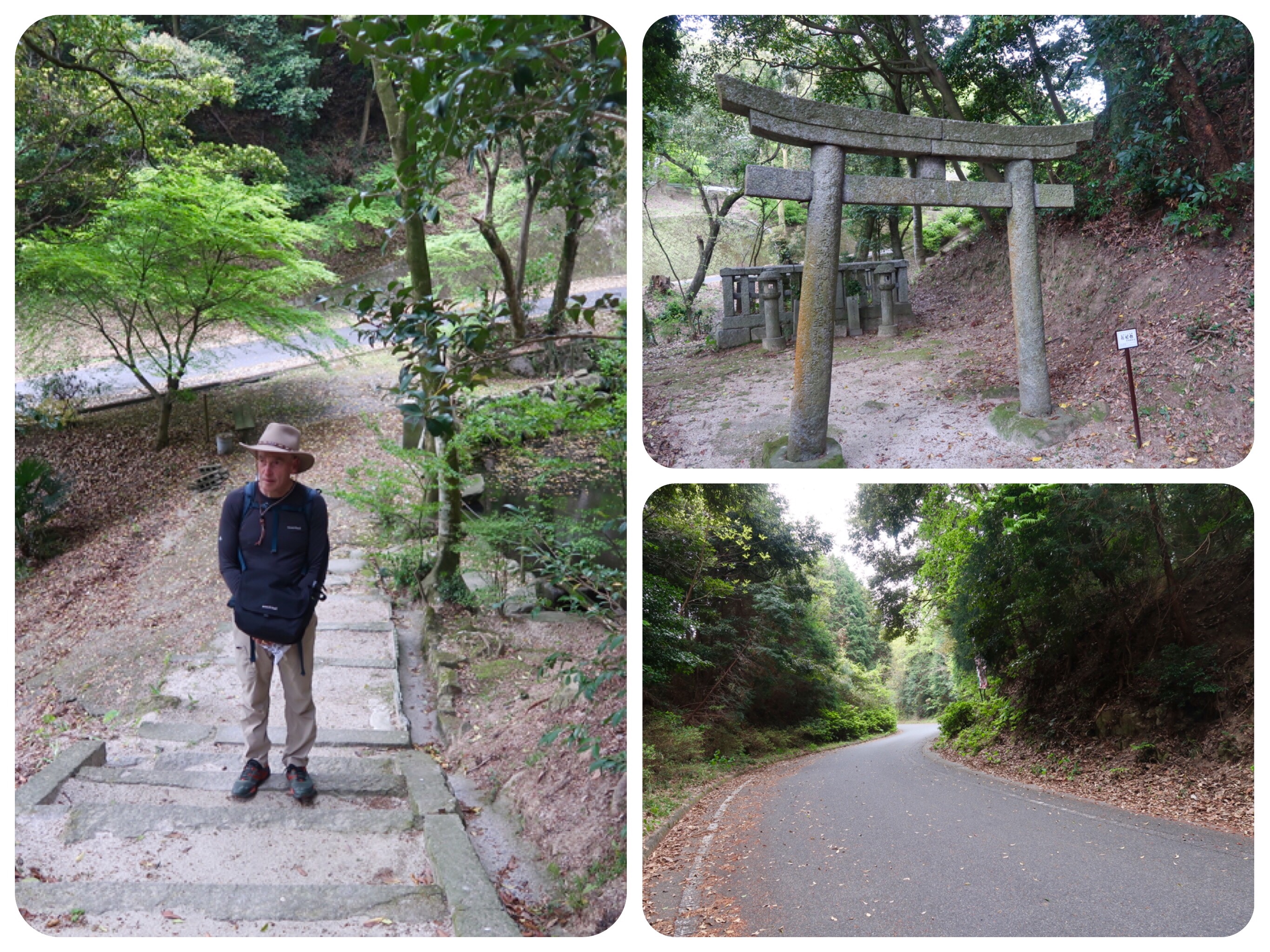 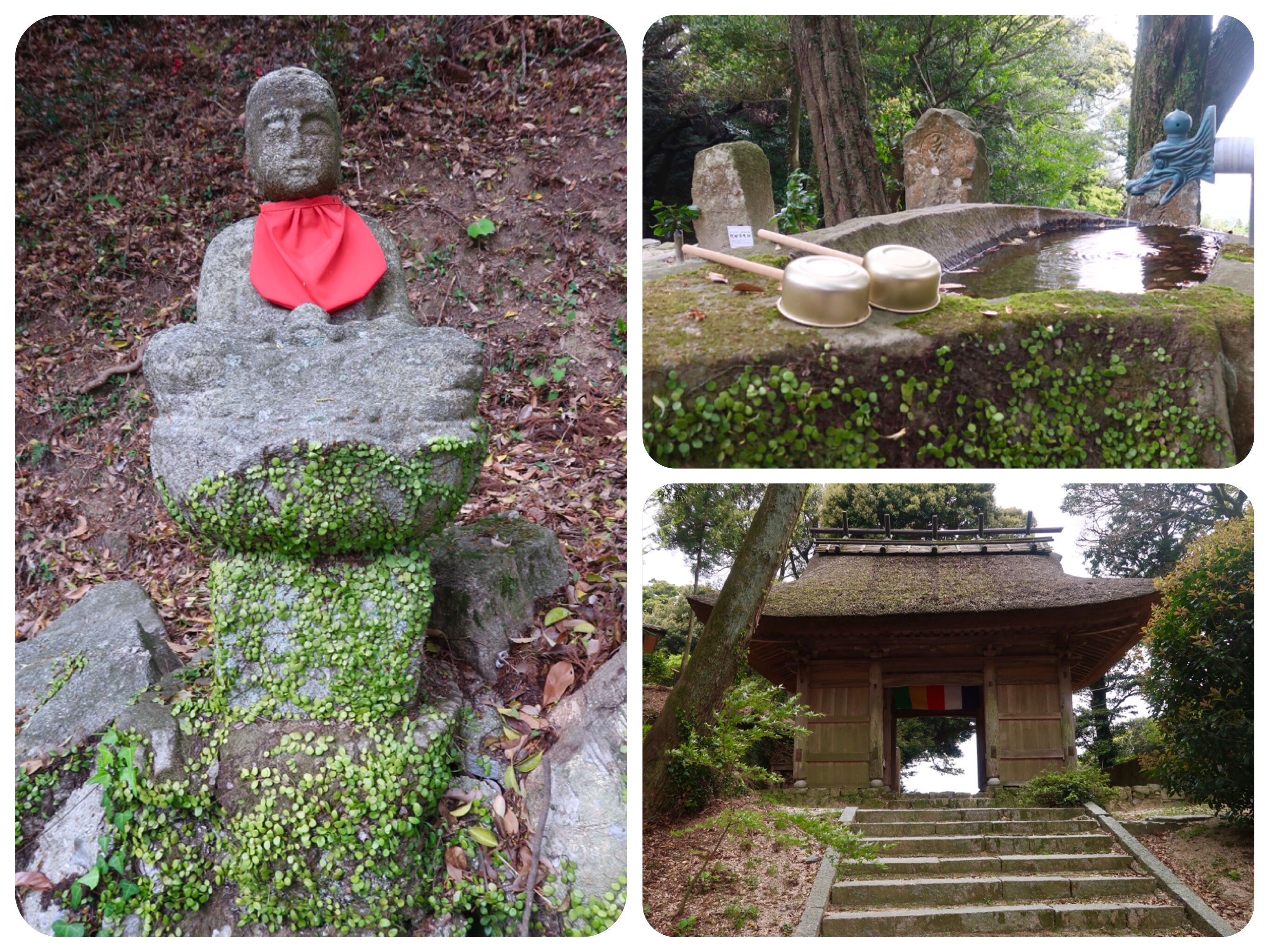 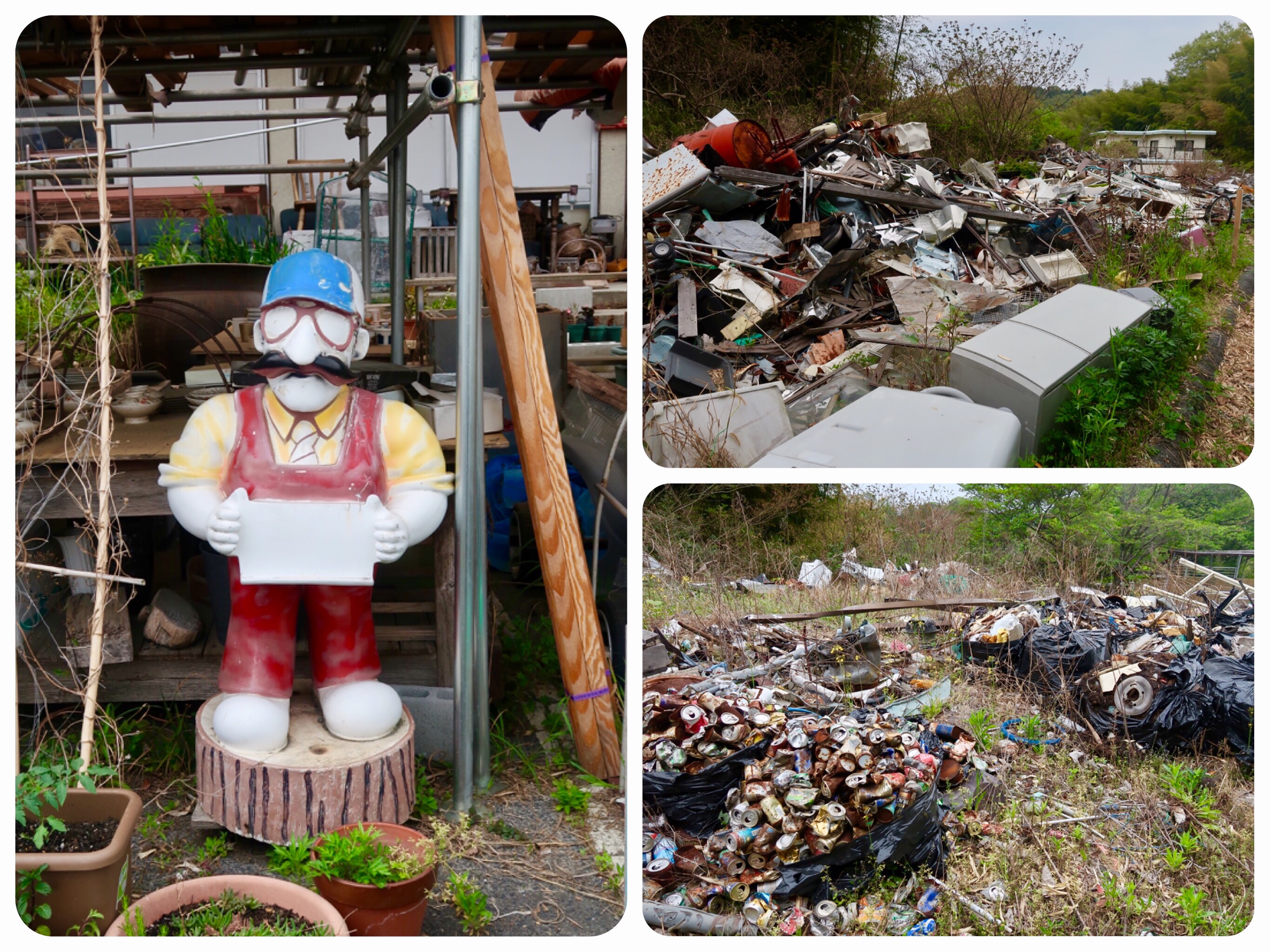 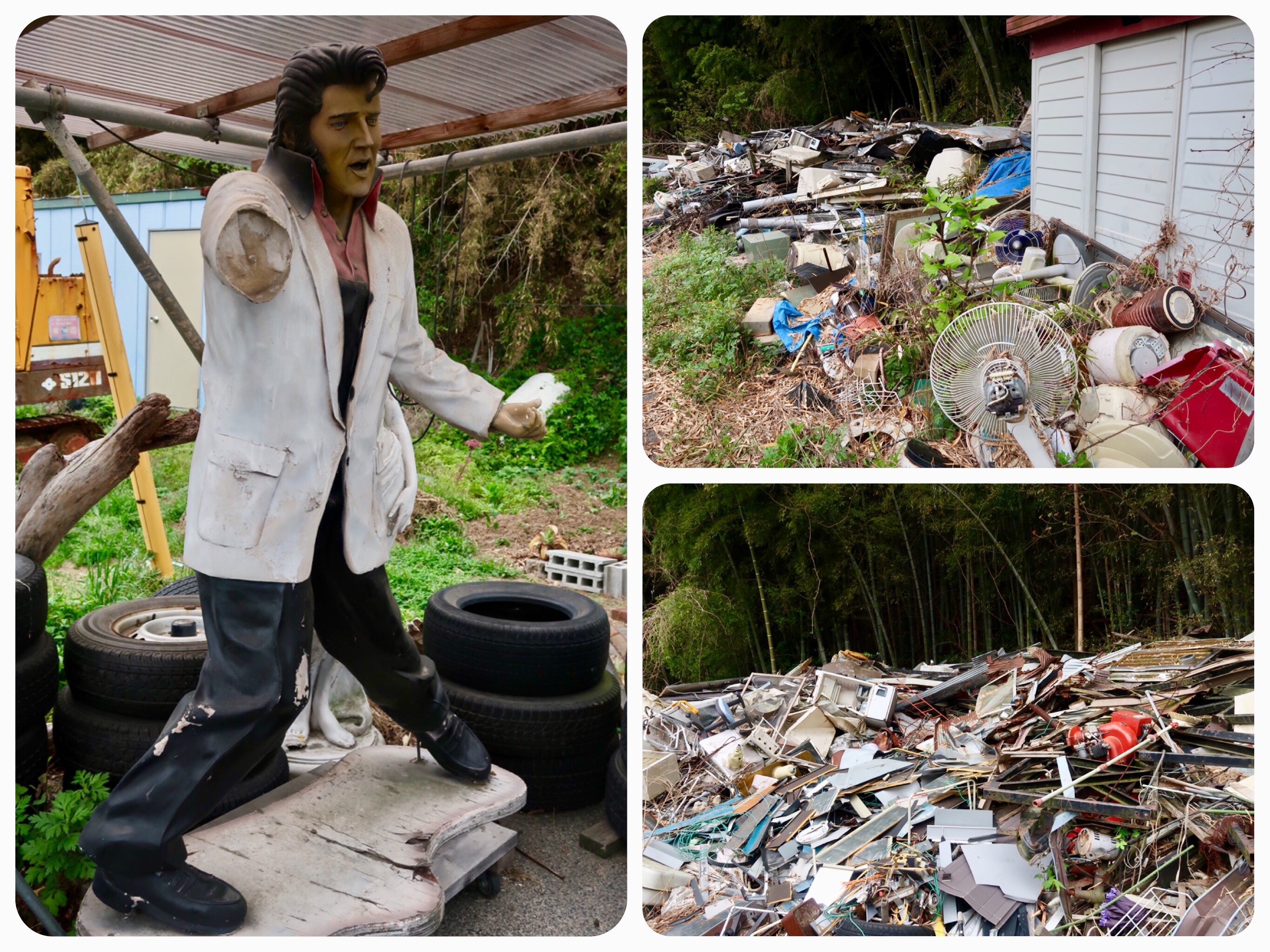 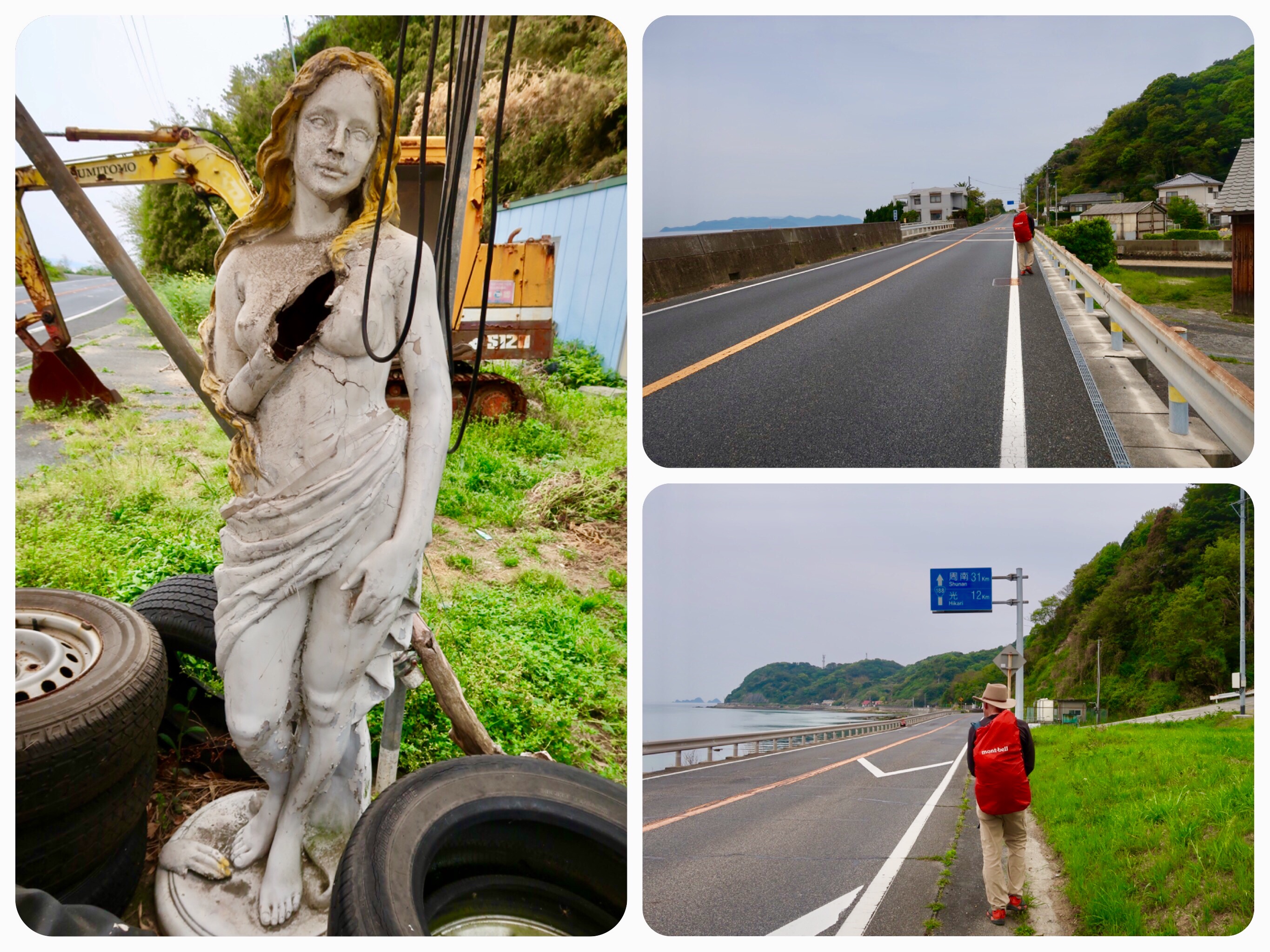 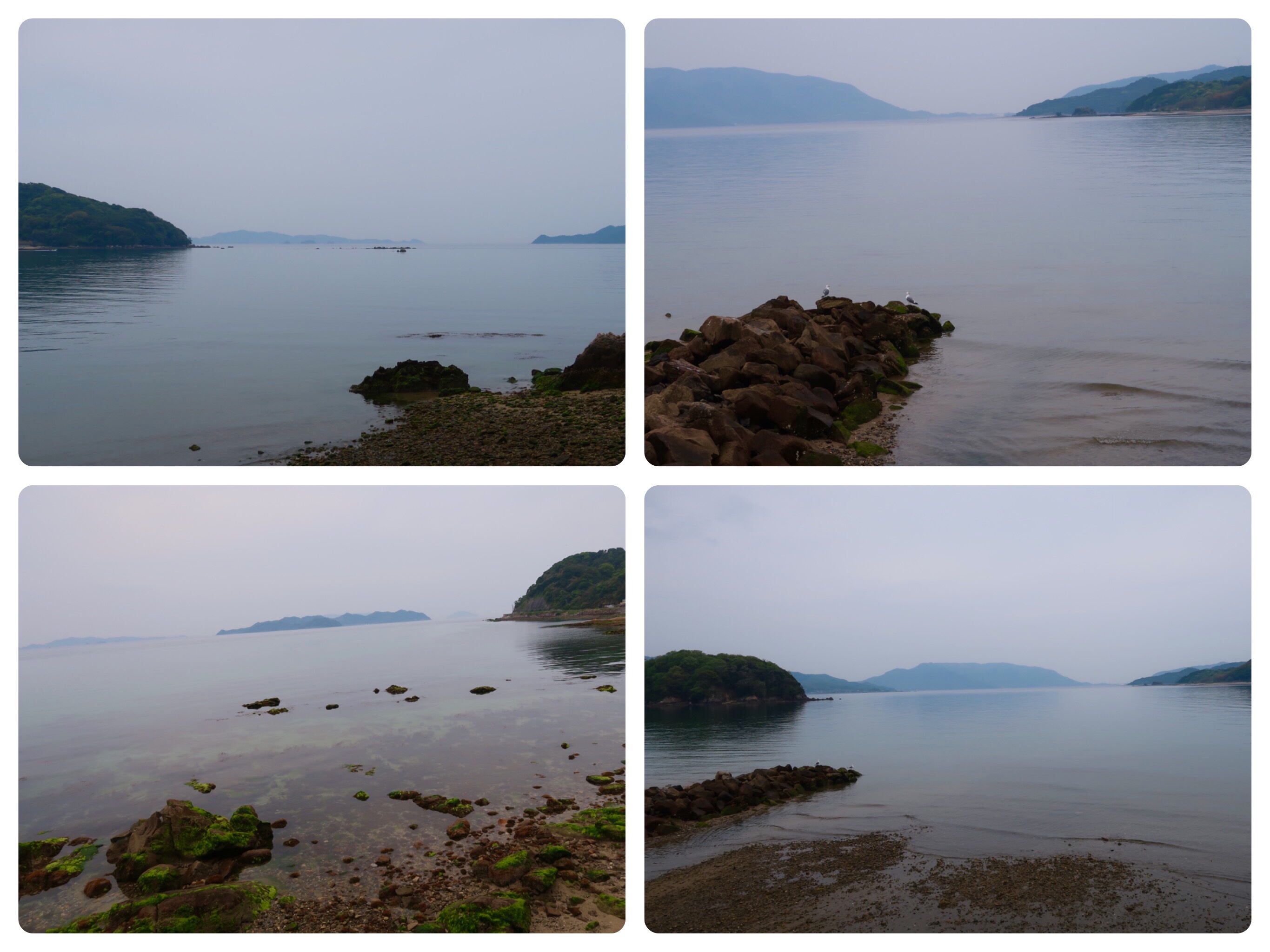 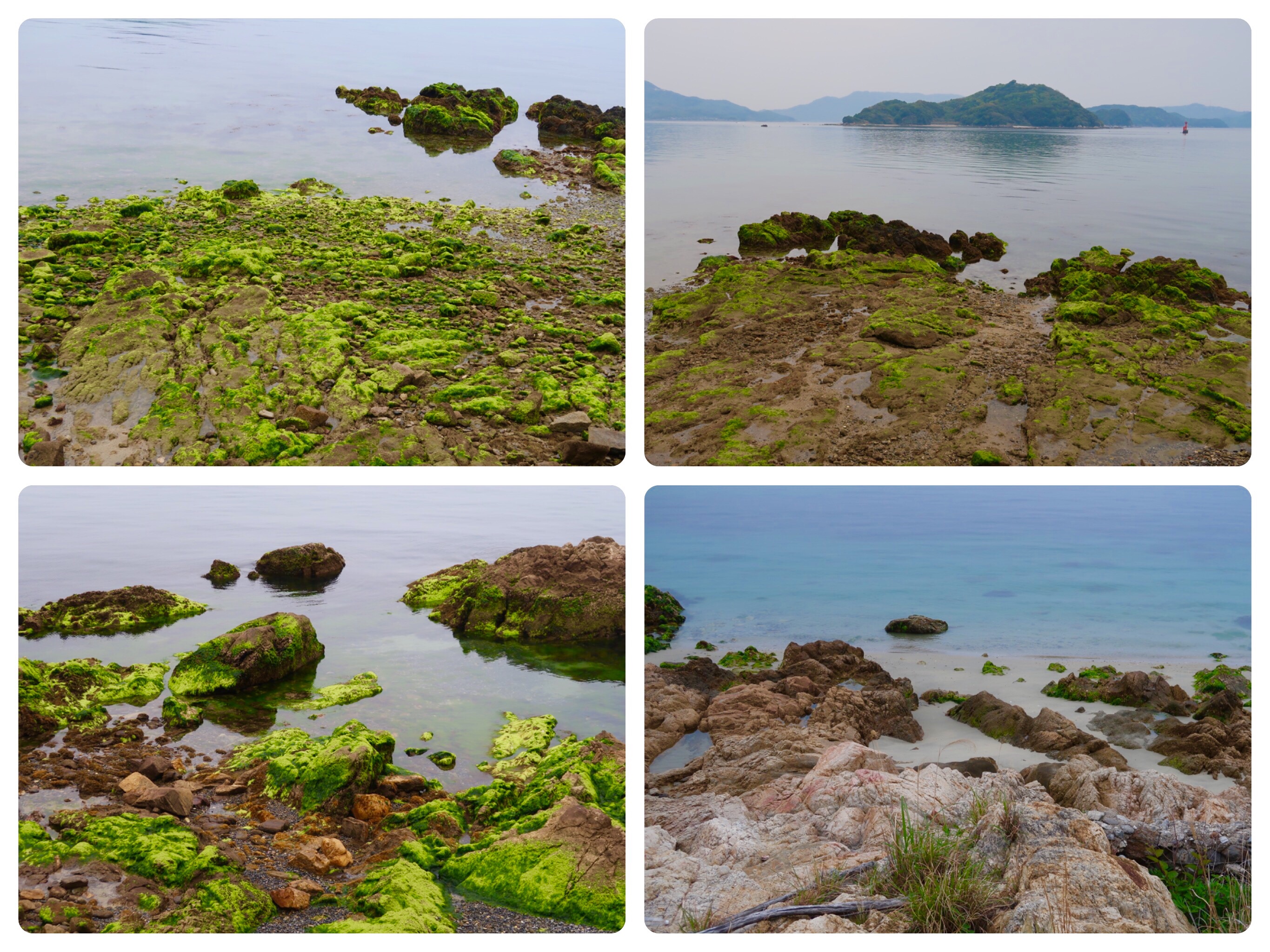 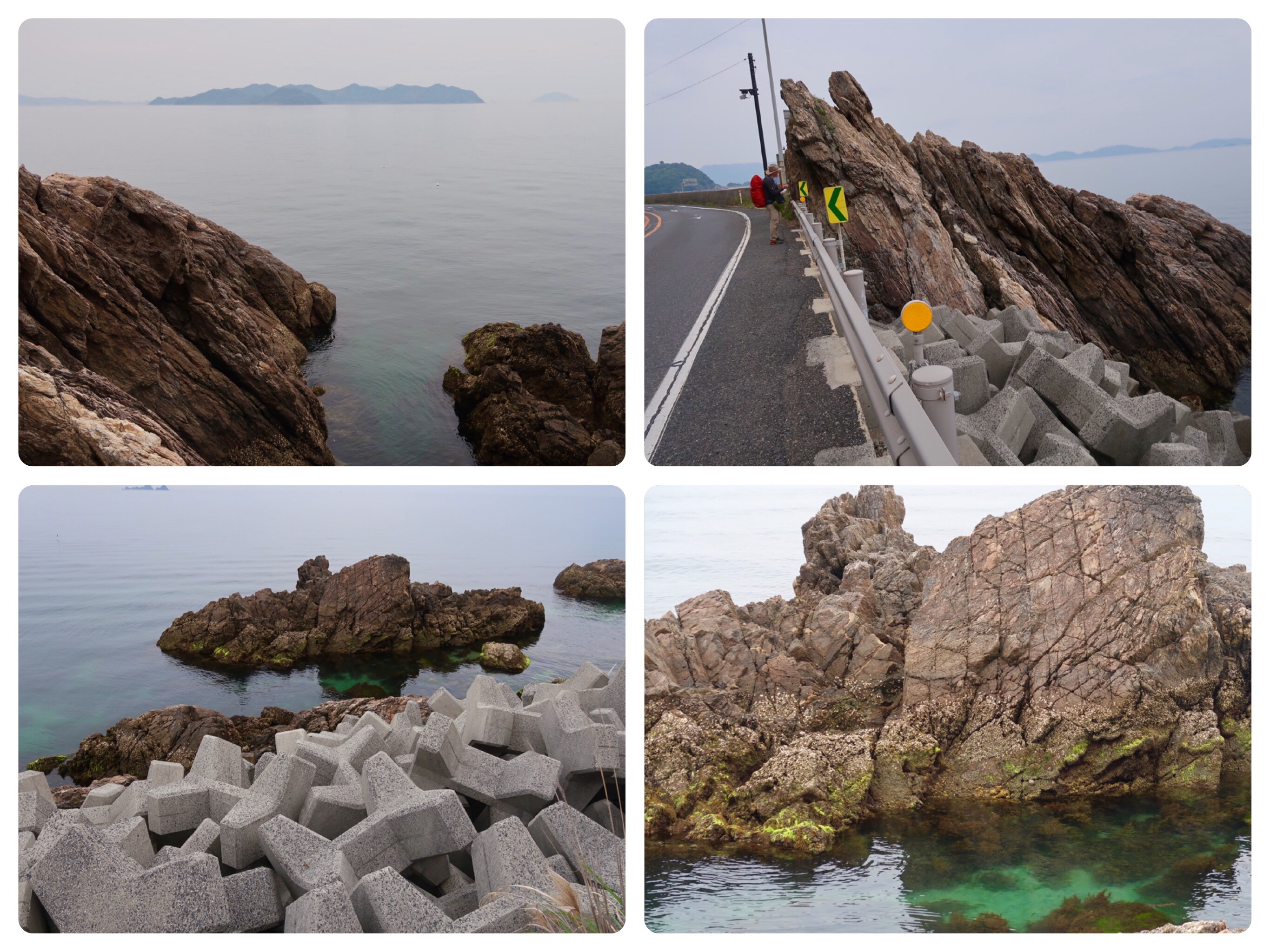 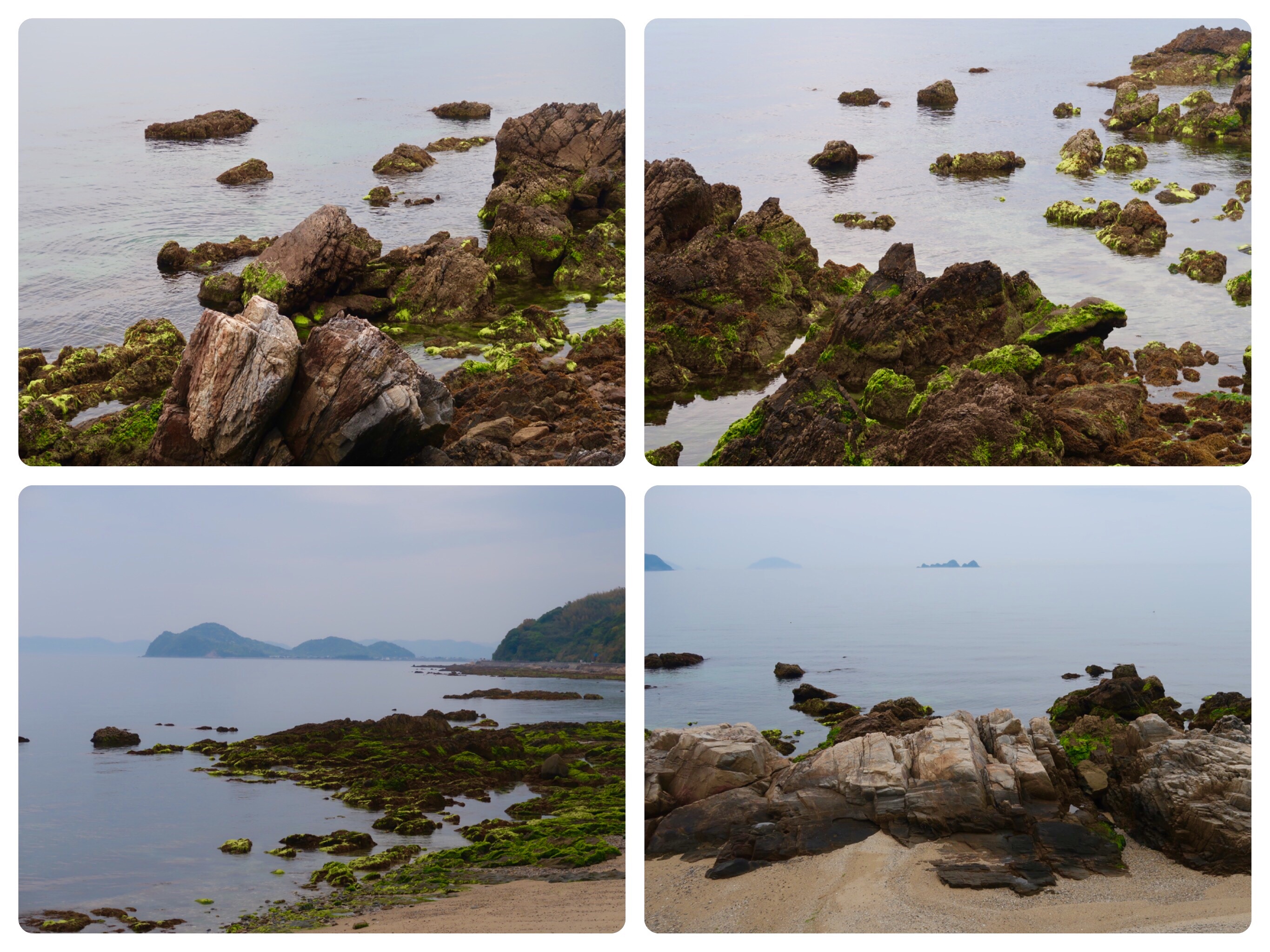 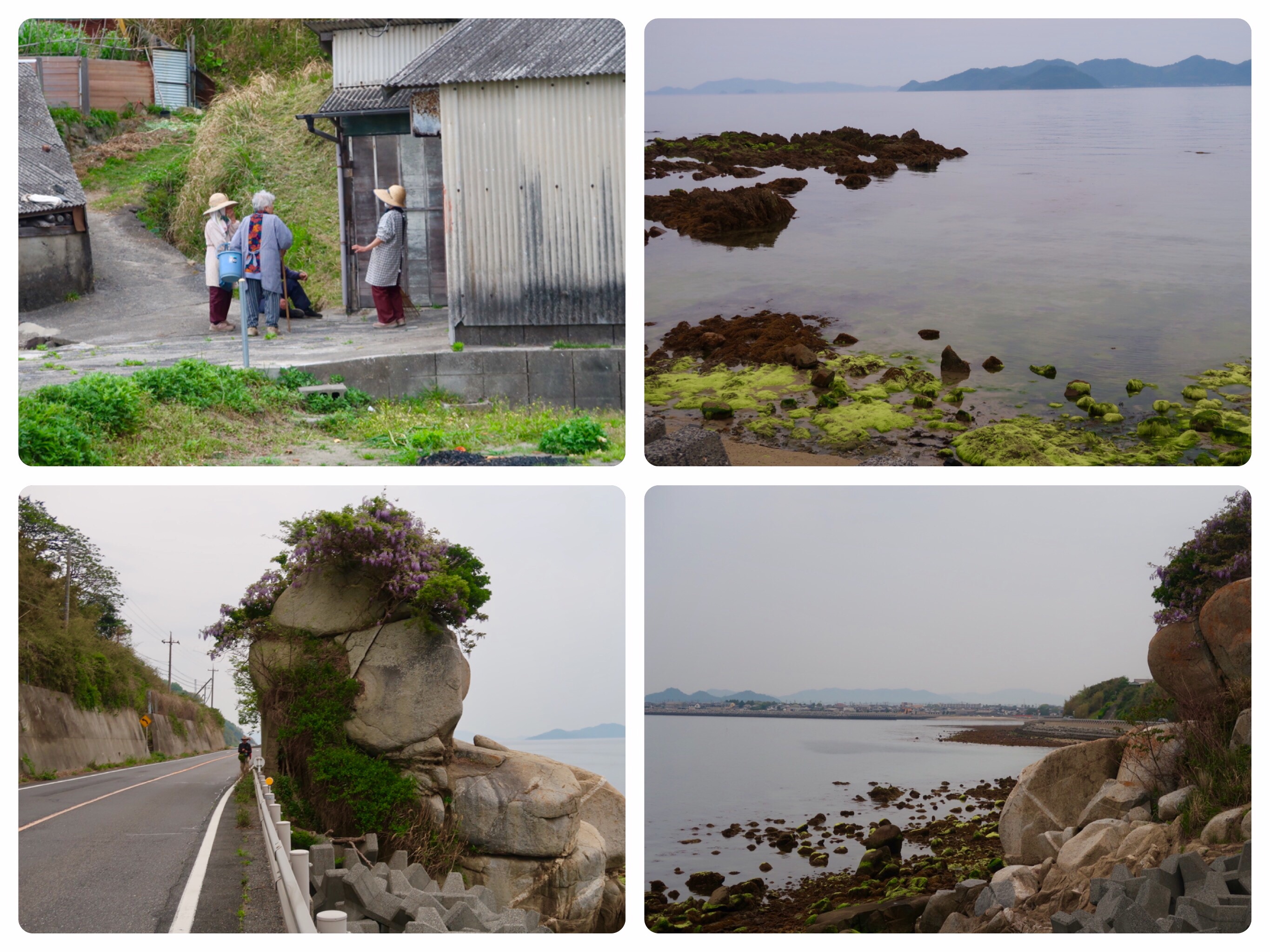 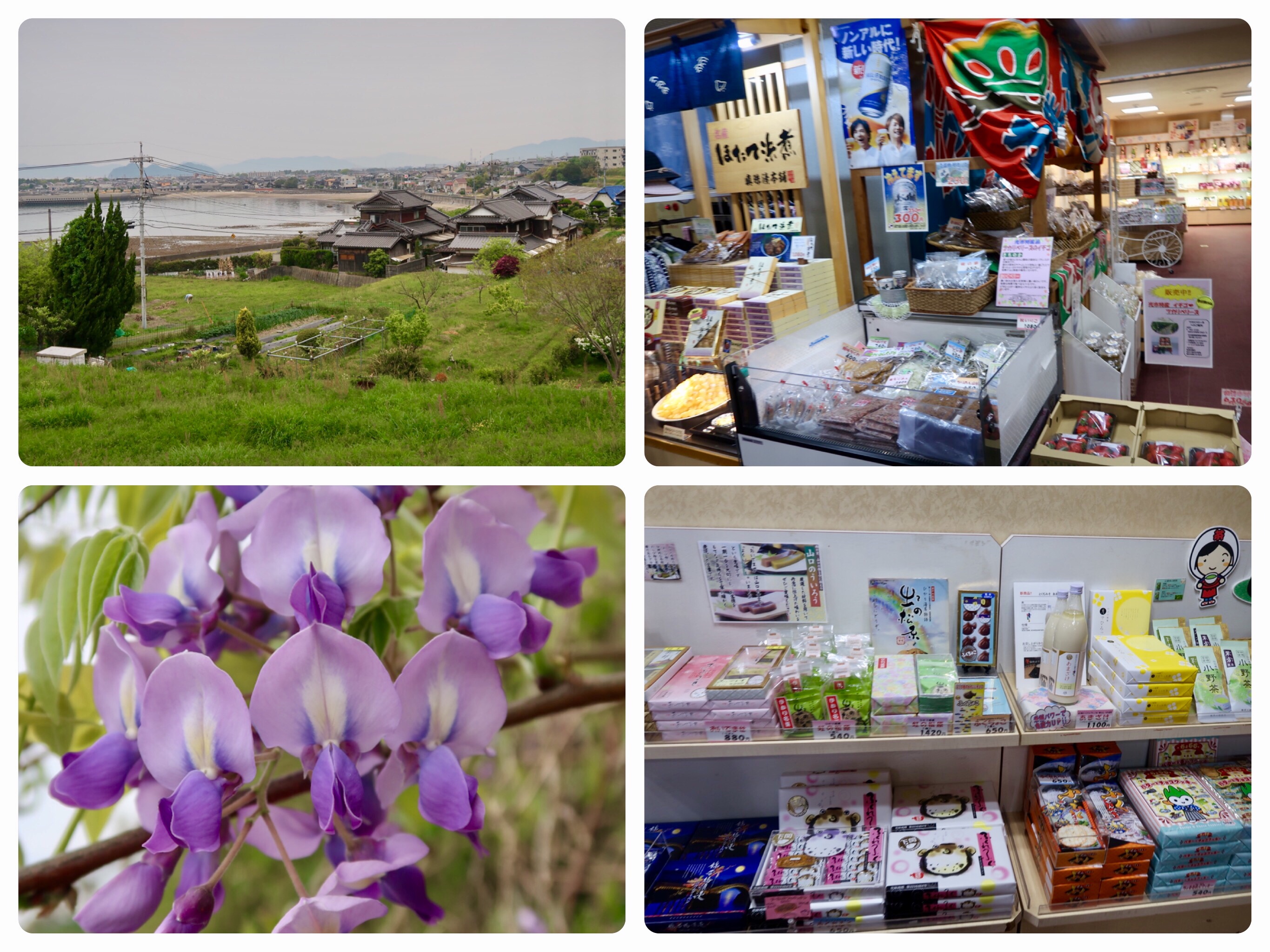 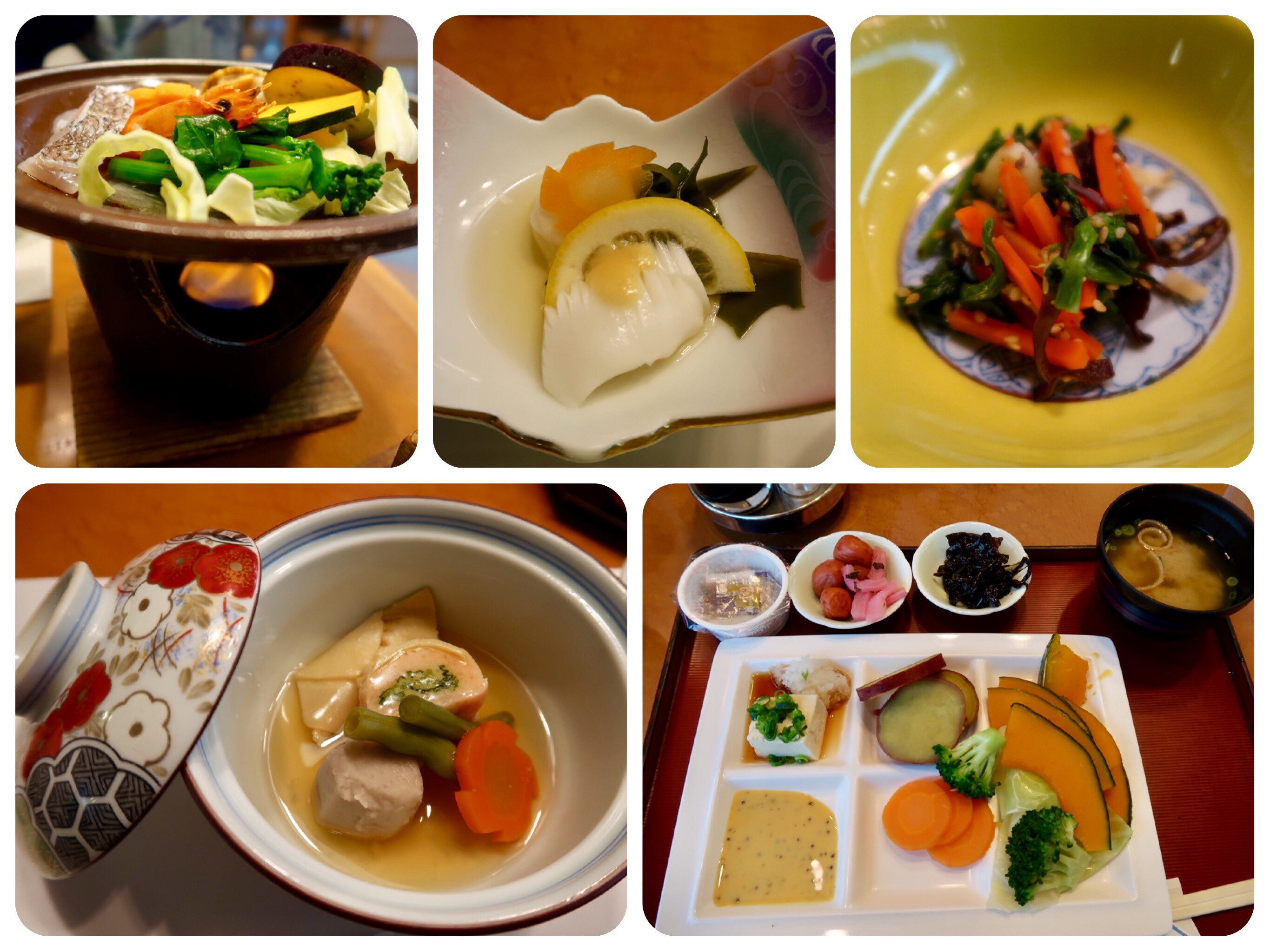 Day 18 – The Chūgoku 33 Temple Kannon Pilgrimage, Japan – Yanai to Hikari, and a Visit to the Golden Dragon Temple Hanya-ji on Shinpozan Mountain

Since we did not arrive in Yanai until the early evening yesterday, we had planned to walk to the mountain temple outside of town this morning, and then to go down the mountain on the other side, and continue walking southwest towards our next hotel, in Hikari.

The climb to the temple was quite steep, and we stopped to take frequent breaks, giving ourselves a moment’s stop every seventy steps we took.
We did not take water or drinks with us, since my map showed that we would be able to stop in a cafe down the mountain and that there were a few convenience stores along the sea road, on our way to Hikari.

I was a bit worried when we climbed up and nobody, not a single car drove up or down the mountain.
This temple is not one of the Kannon 33 temples, but it is one of the four Bengai special temples that are a part of the 37 temples on this pilgrimage.
Would there be anyone at the temple to stamp our pilgrim’s book and scroll?, I wondered.

As it turned out, I did not need to worry.
Indeed no other visitors were at the temple, but the priest, his wife and one of their mothers, was there.
The priest was weed trimming the grass, his wife was replacing the wilted flowers at the feet of the Goddess Kannon, and the mother stamped our book and chatted with us.

The story of this sacred temple is as follows:

Hannya-Ji is a Shingon Buddhism sect temple.
It was built in the year 586 A.D.
The temple is deeply connected to the history of the Seto-Inland Sea.

The rough currents of the inland sea provide an abundant source of food for people, but also take people’s lives as well.
Therefore, for a long time, people have regarded and respected in awe of this ocean current, as a “Ryujin” or a Dragon god.

1400 years ago, lived a princess called Hannya-hime.
She got married to Tachibanano-toyohino-oji (who later became Emperor Yomei), and left her hometown with a group of escort boats in order to live with the prince in the capital.

On the way to the capital, they they experienced a big storm.
The storm killed many of her servants, and Hannya-hime decided to throw herself into the sea, to appease the Dragon god who had created the storm.

The Golden Dragon was believed to be causing the storm, since he was upset with Hannya-hime’s parents filling in the pond where he used to live.

The prince and her parents were saddened by the news, but they followed Hannya-hime’s wishes and built her tomb and founded this temple to enshrine her immortal soul.

The ocean channel between these two gates has been known as one of the most difficult and rough routes to sail through.

The lady at the temple’s office made sure we had passed through the temple’s gate and that we had seen the beautiful wooden guardians.
At sunset, the glowing rays come through the gate and flood the forest around it with a warm light.

It is believed that the spirit of Hannya-hime still resides in the dragon castle deep down at the bottom of the sea, and that today, 1400 years later, her spirit turns into a golden light (called “the dragon light”) and flies back to the temple once every year before the New Year’s Eve.

It is said that people who see this dragon light will be blessed with a large catch of fish, and an abundant crop and fortune.

Today, the spirit of Hannya-hime, enshrined in this mountain, guides those who visit this remote temple to find which is “the true path to take.”

The temple is ancient, and although it was burnt down during the Edo period, it was restored to its original design.

We chanted, lit incense, said our prayers for all who need greater realization of their Divine Holy True Nature to restore them to wholeness, and I rang the old bell to wake up the golden dragon, since after all, this temple is its domain.

By the office, we saw some messages to the temple from New Zealand and Bhutan, the first of which I am adding here:

“Message from Elder of Waitaha People, New Zealand.
We have been the guardians of “Silver Dragons” since very ancient times.

There are several types of dragons.
The senior ones are “Golden Dragons” residing in the land of Japan and the hearts of Japanese people.

However, the power of these dragons, including the golden ones, has gotten weaker as the result of Westernization and having forgotten the wisdom of how to guard them.

This is why we have been here many times, in order to deliver these wisdoms to Japan holding “Golden Dragons” and Temple Hannya.

Especially in this “Temple Hannya: The West Gate of The Dragon” which has kept the energy of “Prince Hannya” who has the power to calm the golden dragons, and is one of the most important places which the Waitaha people have been seeking for.”

On our walk down the mountain, we stopped at a little bakery cafe which seemed to be the only place open.
We had a long walk from there to Hikari, along the sea, and I knew we would appreciate the rest.

The cafe was filled with women dining, but only one woman was making coffee and preparing the food.
She offered a very inexpensive and very high quality set lunch, with soup, salad, toast, coffee and a fresh strawberry dessert.
No wonder every seat was filled.

It took 45 minutes before our ice coffees and toasts arrived, but they were delicious and because we had started the day quite early, we did have plenty of time.

From there, we joined the flat coastal road and walked a long way along the Kandori cape.
The shoreline was rocky with big, green moss covered rocks and views of many nearby islands.

The sea reflected the grey hues in the cloudy sky.
It was supposed to rain that afternoon.

A car stopped at an intersection and a man and his boy got out and waited for us.
He asked why we were walking.
We explained that we were pilgrims on a pilgrimage.

He said, “Oh, so you HAVE to walk.
I thought something was wrong, and I wanted to offer you help in case you needed it.
Be careful on the cape road, it has no sidewalks and cars drive fast.
Walk carefully!
It is also supposed to rain.
Take care and stay strong!”

We walked for hours along the sea road.
The smell of flowers permeated the air, and I took it into my lungs with joy.
I stopped often to take photos, and saw Jules looking at me, wondering if I remembered that it is supposed to rain in the afternoon.
But I had an agreement with the gods of the weather, that the rain would not start until after we checked into our Onsen hotel.

On the outskirts of Hikari, only two miles from our hotel, another car had stopped by the road, and a man was waving at us as if he knew us.
He was an American, and he told us that he had seen us walking, and since the rain is soon coming, he thought to offer us a ride.
Can he take us anywhere?
Maybe even just to the outskirts of town?

We explained we were pilgrims and were intent on walking, and that we do not have much farther to walk.
He asked where we are from.
And when we said Colorado, he said:
“Oh, so you must be used to high mountains, because this area of Japan is very mountainous.
Good luck and stay safe.”

As I had agreed with the rain gods, it started pouring right after we checked into our Onsen Hotel, when we were already in our Yukatas getting ready to soak in the hot springs.
Dinner, which was served in the dining room, was very tasty.

Today, I did well on our walk, my best day of walking so far on our pilgrimage.
Maybe the Golden Dragon, which is my Chinese Zodiac birth symbol, has helped me….

I will end with a message from the king of Bhutan, which was posted at the temple we visited today:

“Our National Flag in Bhutan has a dragon painted on it, and a dragon is the symbol of our country.

A dragon is nothing but our personality.
A dragon exists and lives in the heart of each one of us.

A dragon thrives bigger and stronger as one grows older and accumulates experiences, and one must always be in control of one’s own dragon.

I tell the children of my country to feed their own dragon.
I hope you will feed your own dragon, too.”

With love and many smiles,
Tali

Total distance walked on the pilgrimage so far: 377 Kilometers

Accommodation: Kanponoyado Onsen Hotel in Hikari
A large hotel with rooms overlooking the sea, an Onsen hot springs, and a good dinner and breakfast.