Day 16 – The Chūgoku 33 Temple Kannon Pilgrimage, Japan – From Miyajima to the Castle Town Of Iwakuni 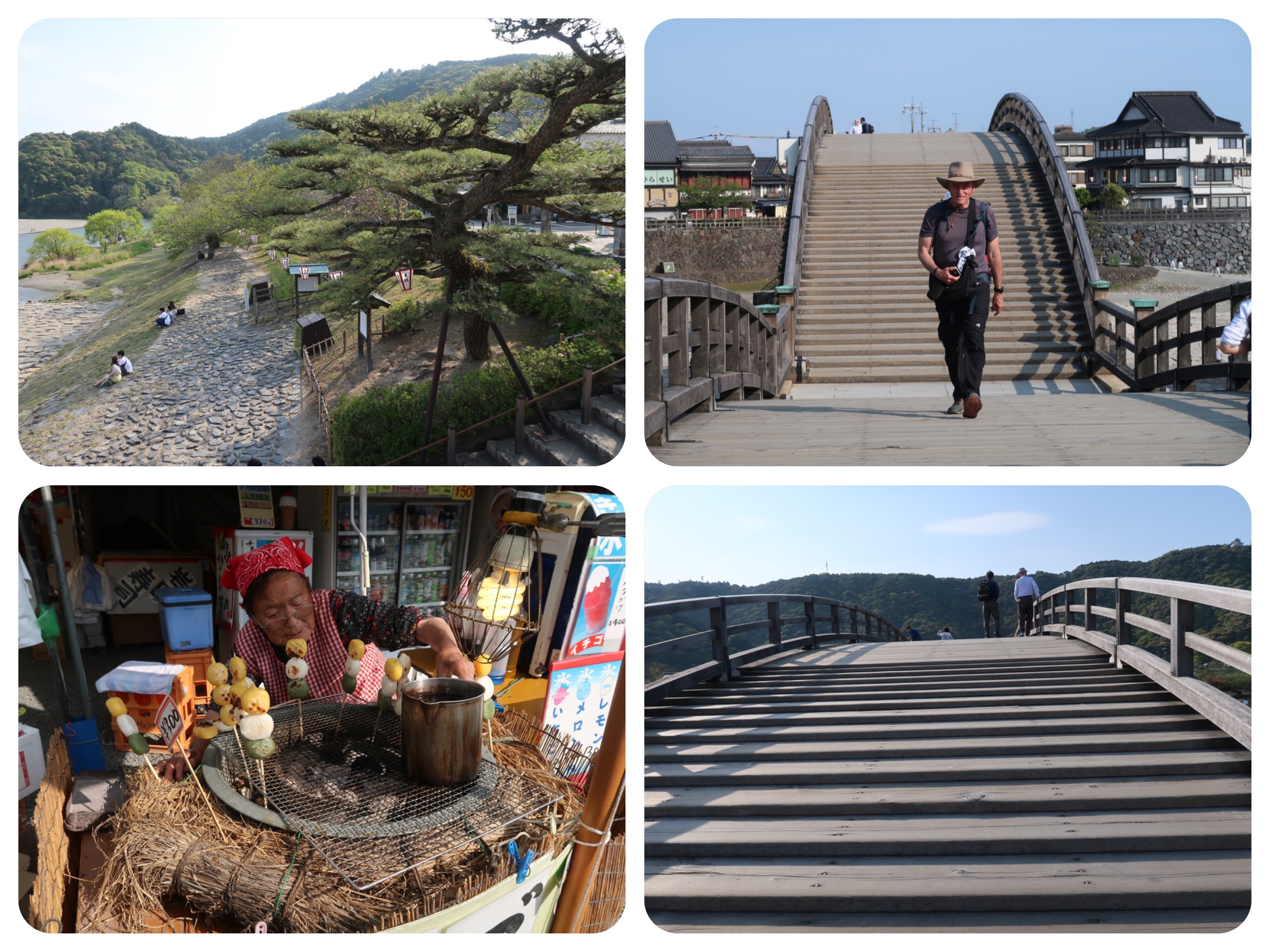 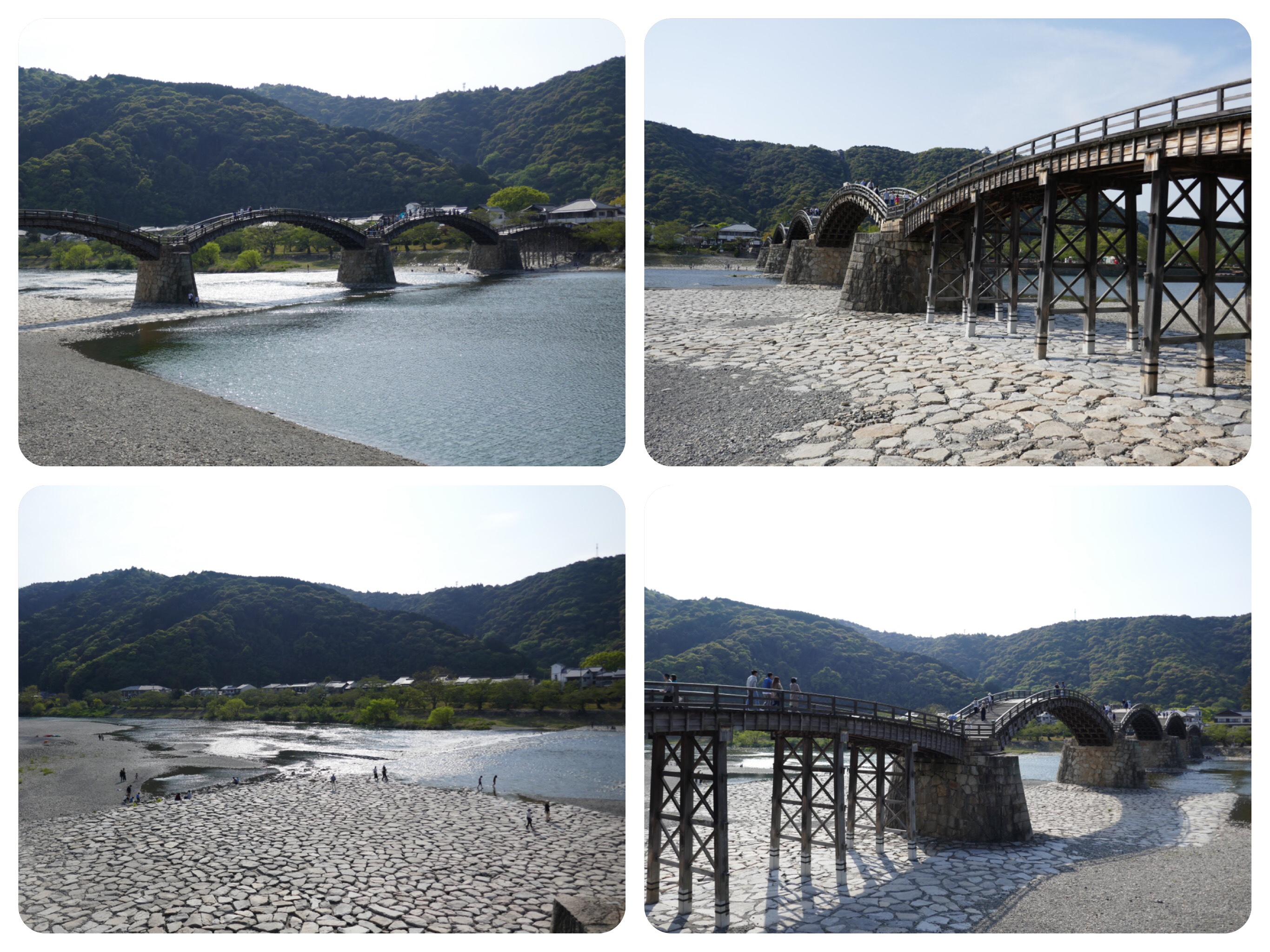 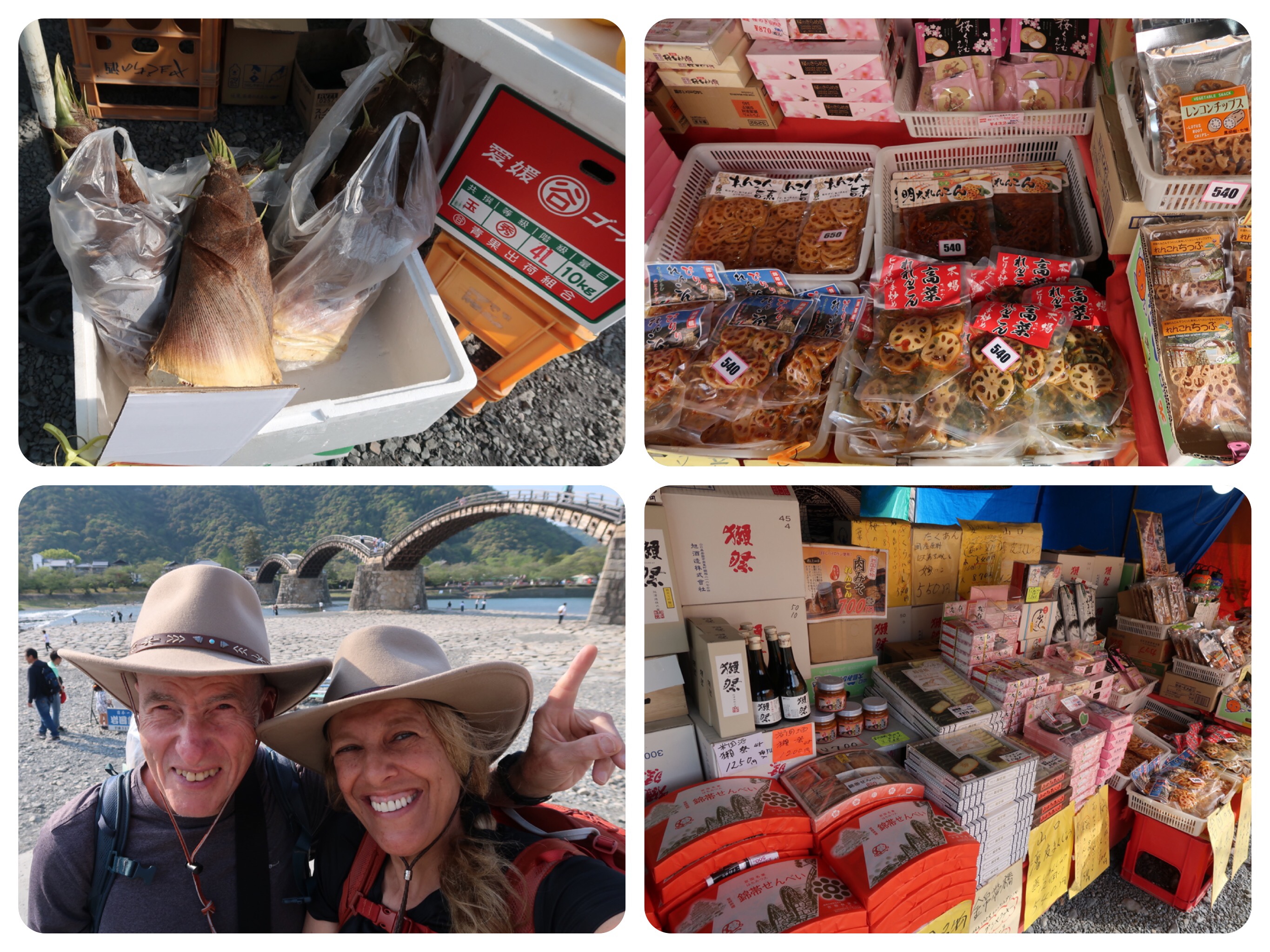 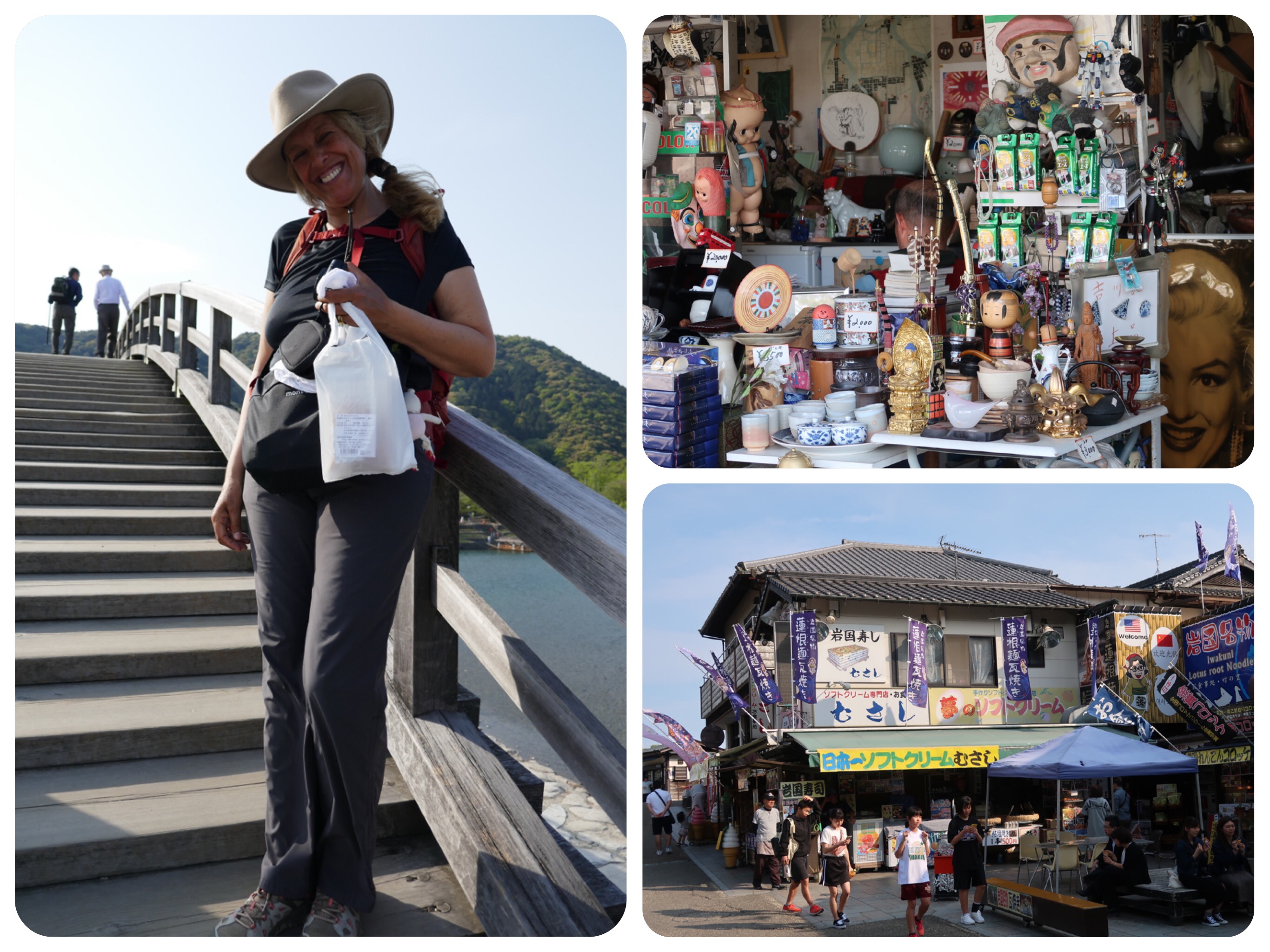 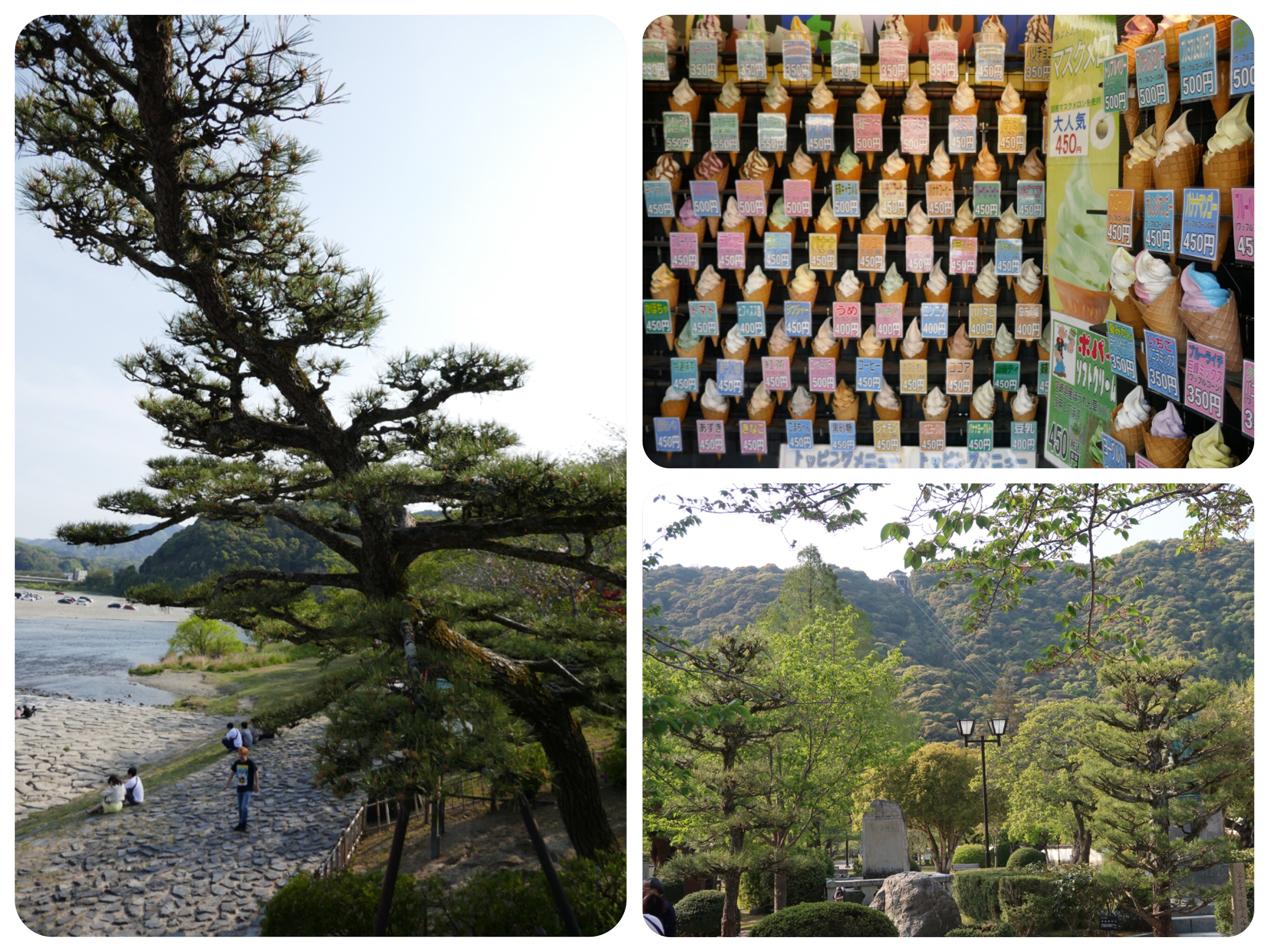 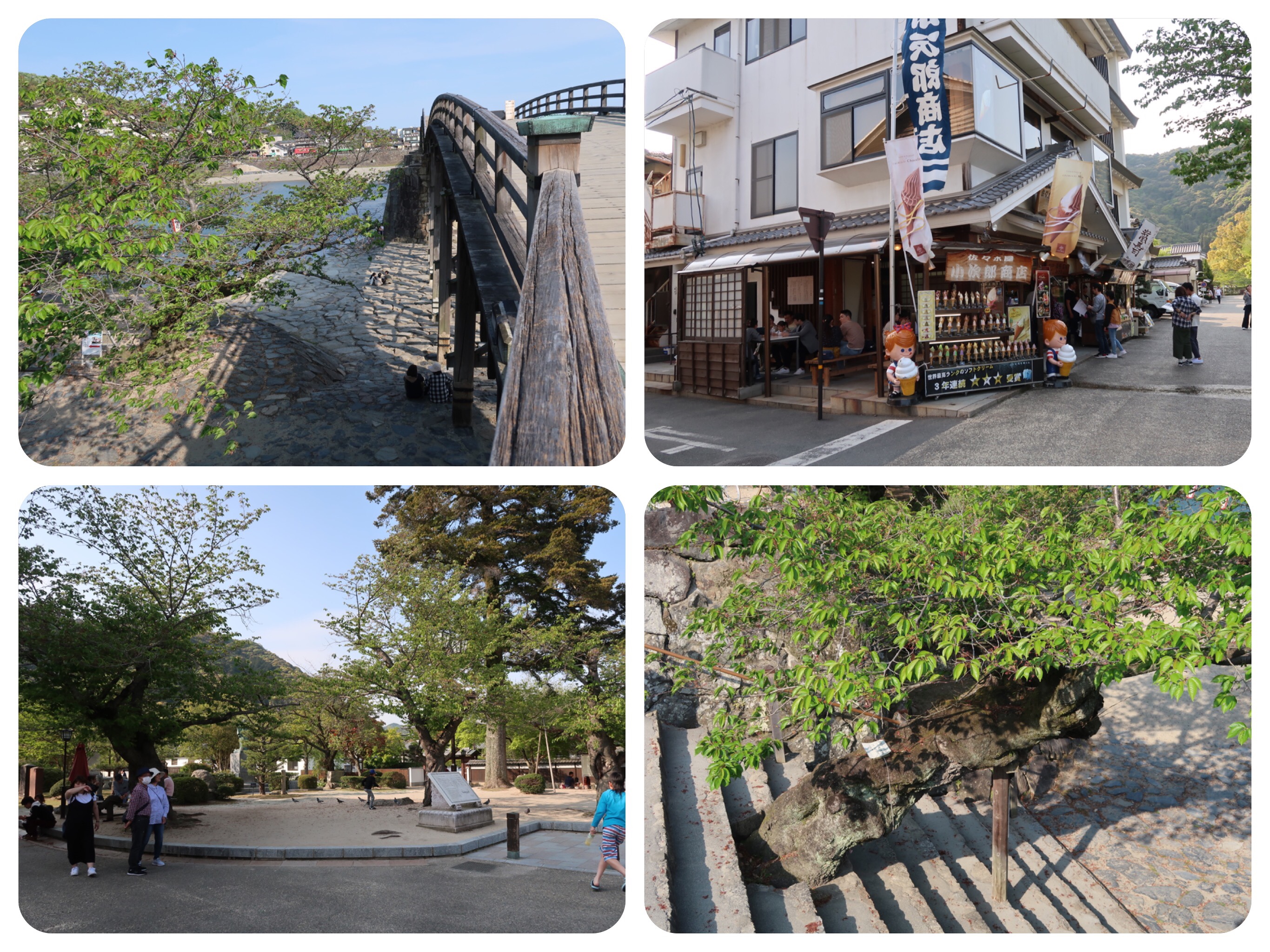 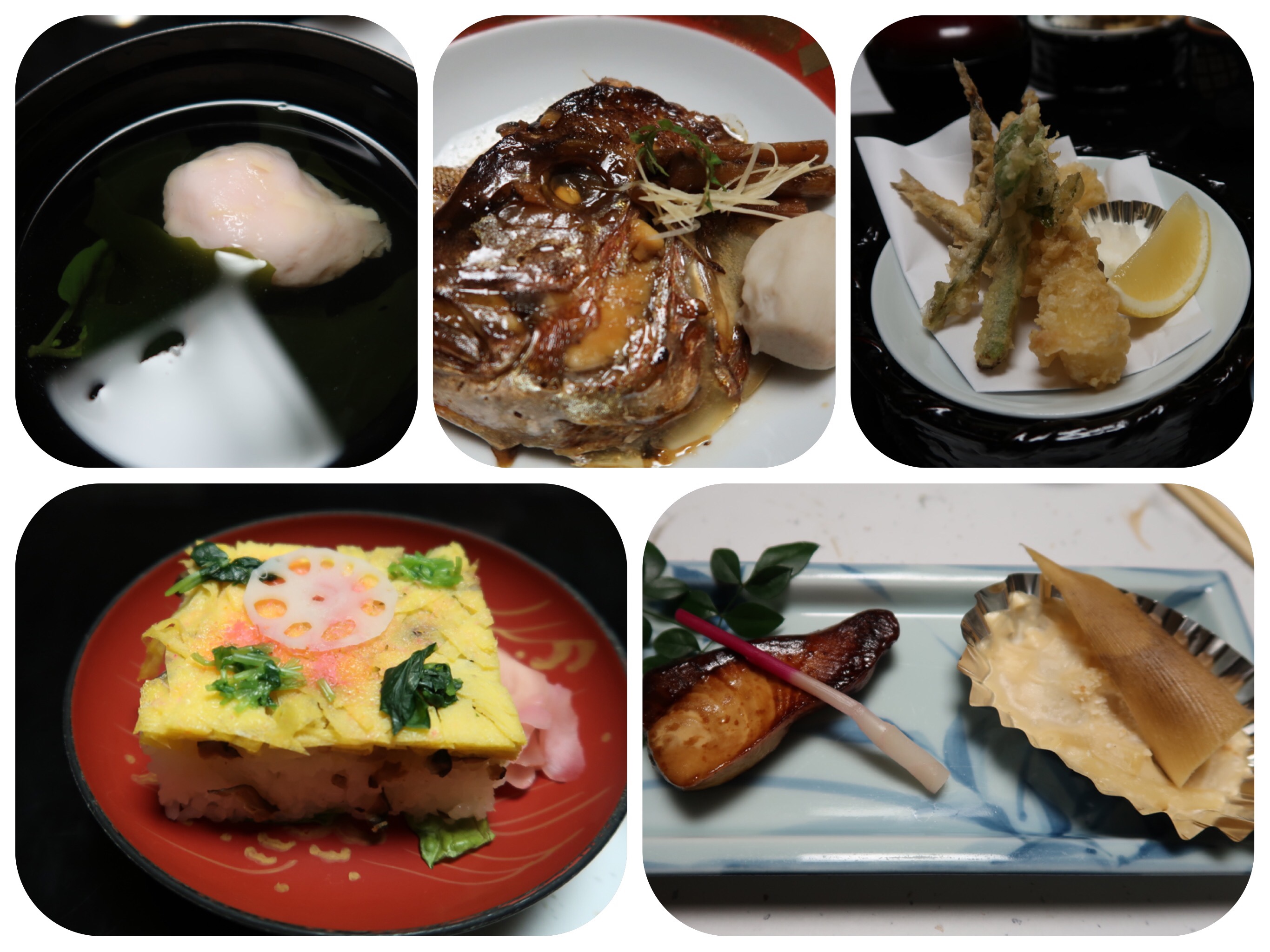 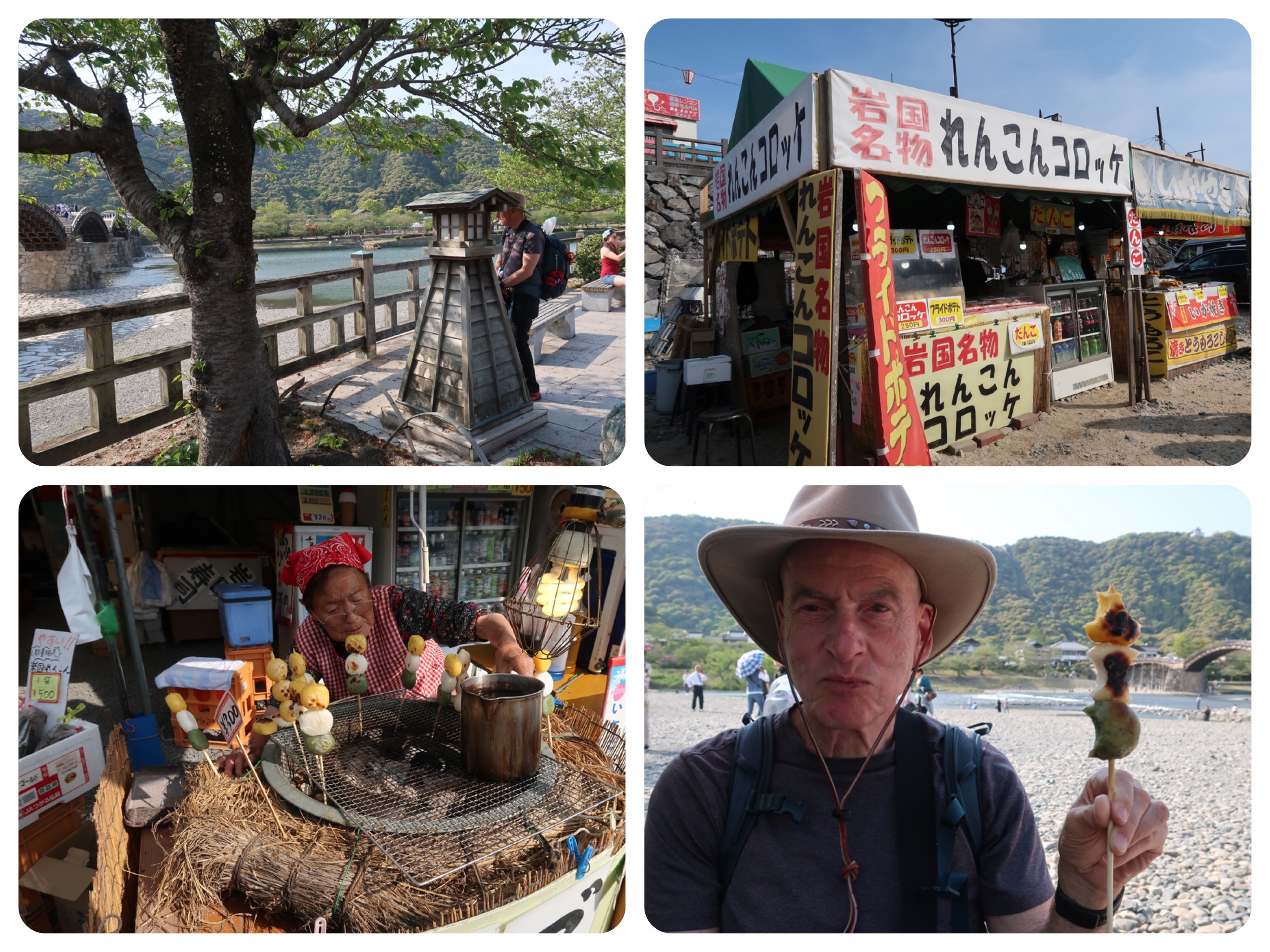 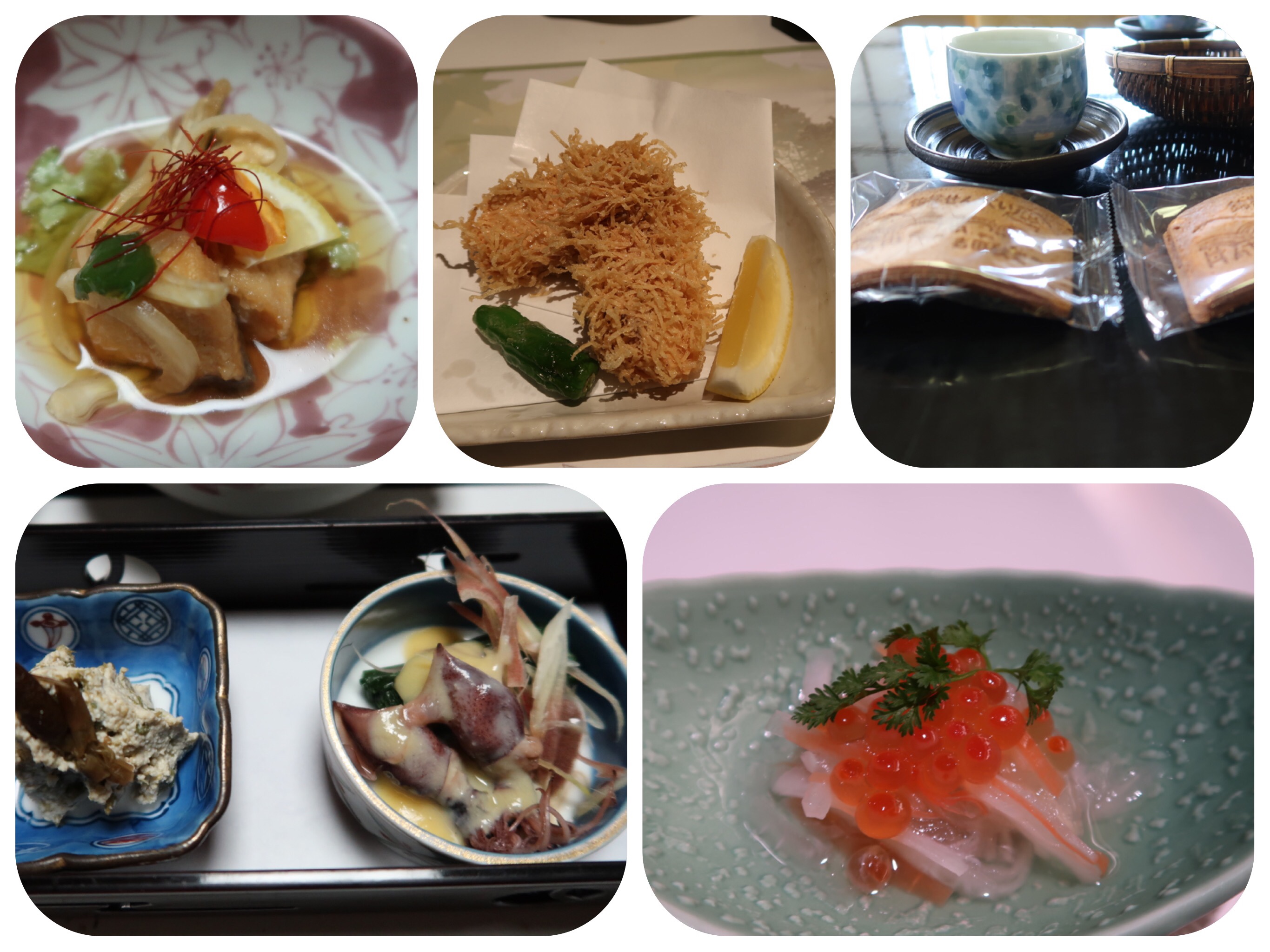 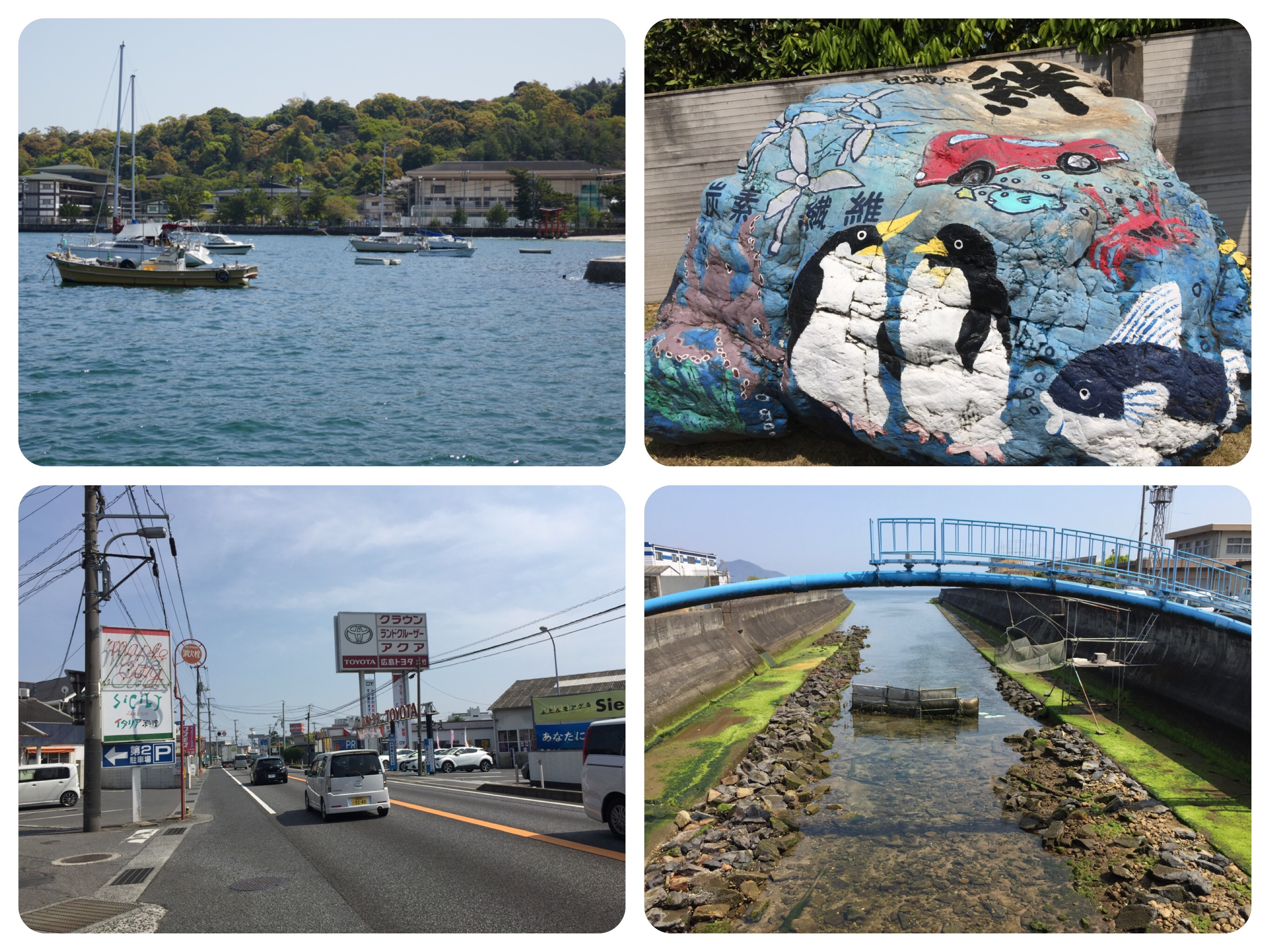 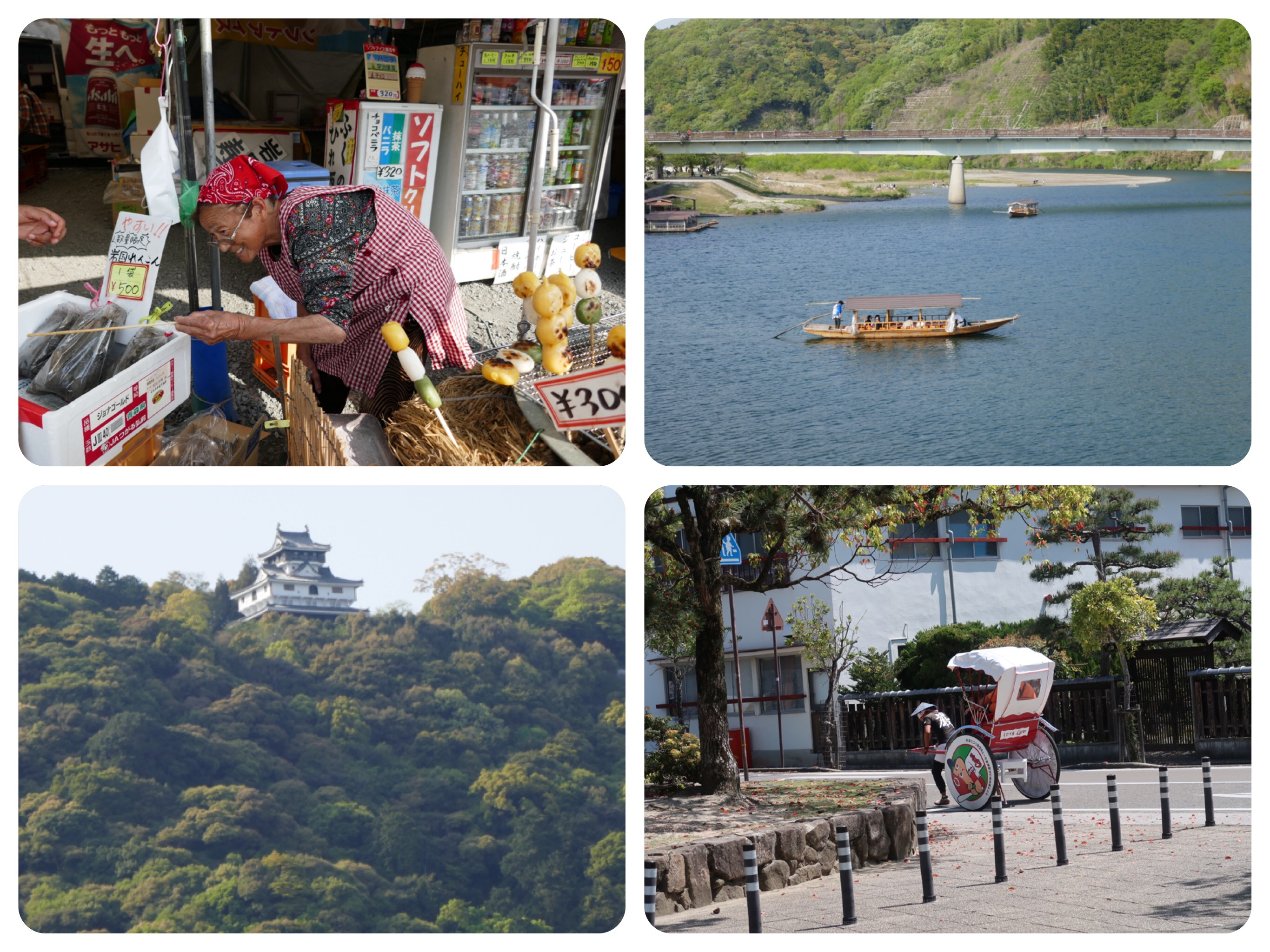 Day 16 – The Chūgoku 33 Temple Kannon Pilgrimage, Japan – From Miyajima to the Castle Town Of Iwakuni

Breakfast in our hotel in Miyajima was a simple but nice Japanese spread of traditional dishes.

We checked out of our hotel early and walked through the village to the ferry terminal.
We stopped for a drink at the large and comfy Starbucks in the middle of the ancient village.

The ferry to Miyajima-Guchi is run by the JR company, and so the ferry is large and well maintained.
From Miyajima-Guchi, most tourists take connecting trains to their destinations.

We just turned left and started walking south along the coast, much to the amazement of the train employees directing the traffic off the ferry, who thought we were lost.

The next temple we have to visit is located on a mountain in the town of Yanai.
But the distance to Yanai is too great, so we planned to break the walk up into two days of walking, and to stay overnight midway, in the town of Iwakuni.

The walk was in the full sun all day long along Route 2.
The weather is getting very hot now, and it is only mid to late April.
“What happened to Springtime?” I asked Jules.
“It’s another sign of Global Warming,” answered Jules, while taking off his light long sleeve hiking shirt and walking with just his T-shirt.

I followed suit and took off my hiking long sleeve shirt and we both felt a little less hot.

As we continued walking, I did begin to feel fatigued and hot.
Nobody was walking anywhere, not even locals were walking on any of the streets.

There was not much to look at most of the day, and no places to stop and rest, except in convenience stores where we got some water and used the toilets.

Occasionally there were nice views of the sea, but there were also the usual car dealerships, manufacturing plants, and other service businesses, without cafes or restaurants.

I wasn’t hungry, maybe because of the heat, but I really needed to just sit down and take a break from walking.

My map showed a 24 hour meat and Udon eatery, and I was willing to buy anything, even if I did not plan to eat it, just to sit in an air-conditioned place and rest for awhile.

I opened the door to the restaurant, but the cigarette smoke was so dizzying, that I could not even see if there were any tables available.
I backed out of the place as fast as I could.

We went next door to a convenience store, bought some bananas, clementines, salted peanuts and water, and we sat outside in the smokers’ corner, that had a bit of shade and a small table on which to place our fruit.

The day before, I had bought some Yuzu Vinegar, which I mixed into my water bottle to make a very tasty sugar-free lemonade.

The way to Iwakuni still involved a long walk to go, even after our short rest. Our plan was to take a taxi from the Iwakuni train station to our hotel, which is all the way west of Iwakuni station, in the touristy part of town by the castle.

But the route south to Yanai passes through Iwakuni station, and we planned to continue walking south along the direct route tomorrow.

Iwakuni is famous for its bridge area, which is very close to our hotel. That area, and the bridge itself, were beautiful and well worth the visit.

Iwakuni Is famous for the Kintai wooden Bridge (Kintai-kyo), and it is by far the city’s most popular sightseeing spot.
The Kintai Bridge over the wide Nishiki River was first constructed in 1673 by Hiroyoshi Kikkawa.

The original bridge stood until September 14, 1950, when it was destroyed by a typhoon.

The bridge was rebuilt using the same techniques as the original, with the same wooden arches and wooden steps. China assisted in the rebuilding, as a sign of Japanese/Chinese friendship.

Nowadays, they charge pedestrians to cross the bridge, and renovations of sections of the bridge are done every five years to keep it in good shape.

Its five arches are a symbol of western Honshū, the region we are now walking in on our pilgrimage.
Under the bridge over the stony river, vendors sell local foods and snacks.
We bought some grilled Mochi (short grain rice cakes) on a stick, in three flavors, sweet potatoes, green tea and original, and enjoyed them very much.

Iwakuni is also famous for fresh lotus roots, which are cooked in different ways such as sautéed, pickled, fried or simmered.

Lots of places were selling lotus root products, and also bamboo shoots.
I bought some crispy salted lotus root chips as a snack for tomorrow’s walk. (lotus is called Renkon).

Kikko Park is located on the other side of the Kintai Bridge, near our hotel for the night.
This area used to be the residence of the Kikkawa family.
The park has a big fountain and contains numerous shops selling ice cream, lotus root and fish cakes and the famous Iwakuni Zushi (Iwakuni Sushi).

Iwakuni Zushi is a special local version of sushi, which is made in a square mold and served cut into large squares.
It is prepared in large amounts, generally enough to feed about 150 people.

We were served Iwakuni Zushi during our Kaiseki meal that was later served in our room.
It was topped with some small pieces of grilled eel and a slice of lotus root.
It was delicious.

We were also served a version of the famous Iwakuni Chagayu, which is a tea-flavored rice porridge, originally created about 400 years ago.

There are other things to see in Iwakuni, like the Samurai residence and the Iwakuni castle (originally constructed in 1608), which can be reached via a ropeway.
But we had arrived in town too late to visit the castle and the museum.

Kikko Park is also home to a sanctuary for white snakes.
These snakes are found only in Iwakuni, and have been designated as special national treasures by the Japanese government.

We got a spacious Japanese tatami mat room overlooking the Nishiki river.
In springtime, traditional cormorant fishing can be seen on this river.

The fishermen dress in traditional clothing such as special headgear, an apron, a straw skirt, and straw sandals, to perform this hundreds of years old fishing technique.

The fishermen ties a rope to the cormorant, and after the bird catches a fish, they retrieve it from the cormorant’s mouth.

That night we soaked alone in the hot spring and listened to the nourishing silence.

So far, this pilgrimage has gotten us to some wonderful ancient temples and very scenic villages, and we are only at the beginning of it….

Wishing you a most wonderful day/night, and with lots of love,
Tali

Total distance walked on the pilgrimage so far: 325 Kilometers

Accommodation: Hotel Kikunoya in Iwakuni.
A small place with mostly Japanese guests, with a public hot bath and a very good Kaiseki dinner featuring all the local specialties, qand breakfast.