Day 7 – The Chūgoku 33 Temple Kannon Pilgrimage, Japan – The Life and Poetry of The Zen Master Ryokan, and Entsu-ji Temple 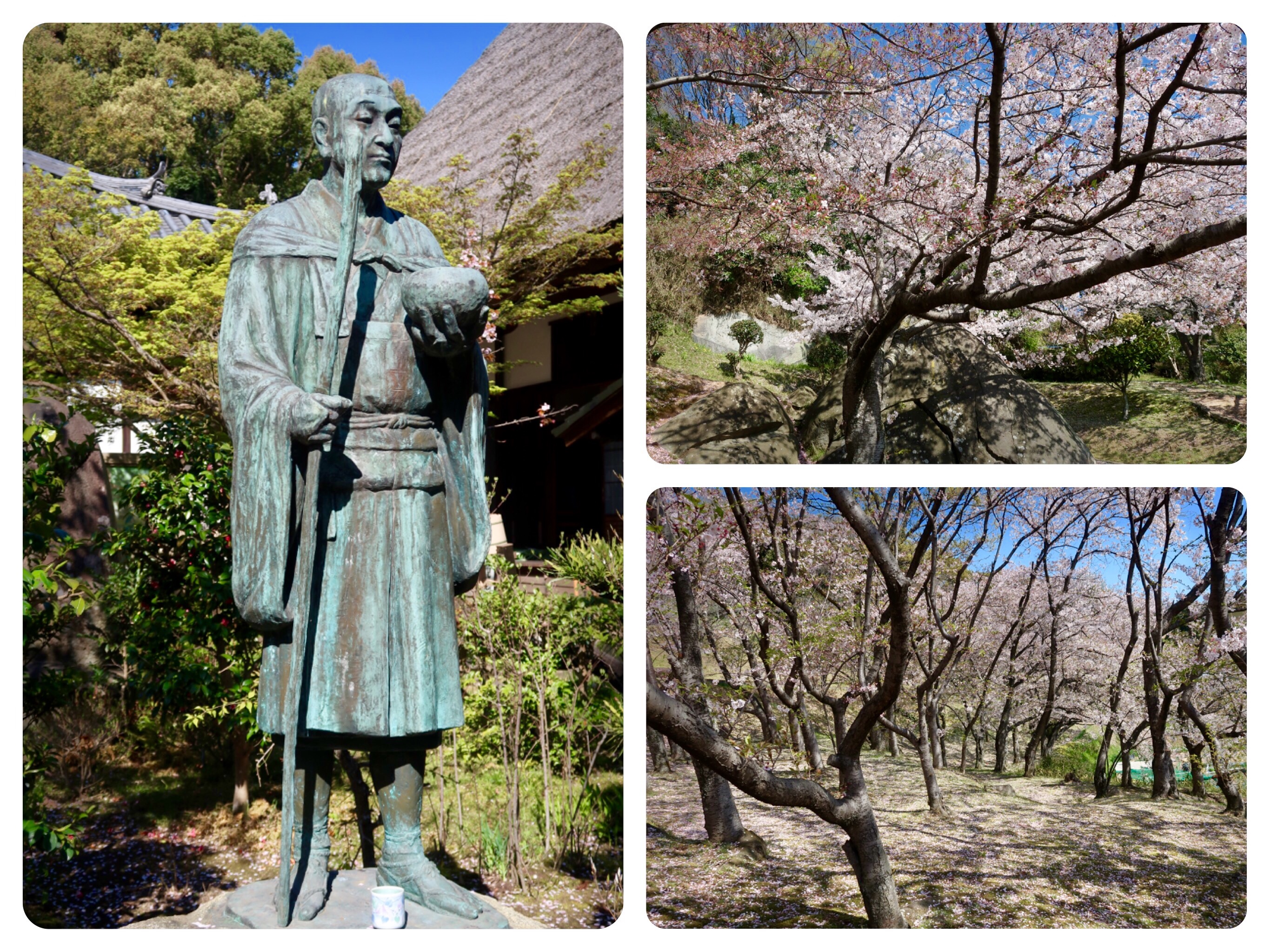 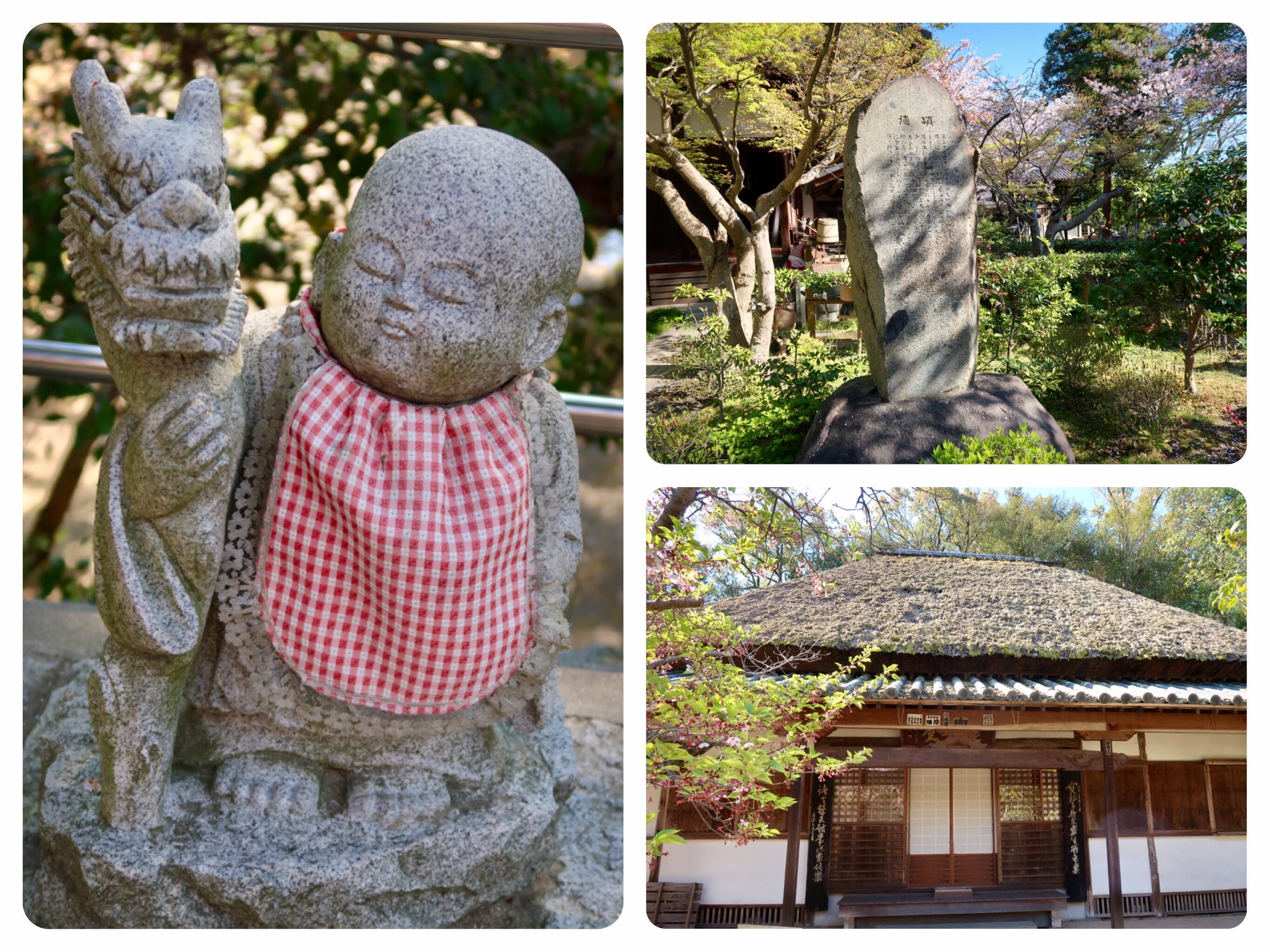 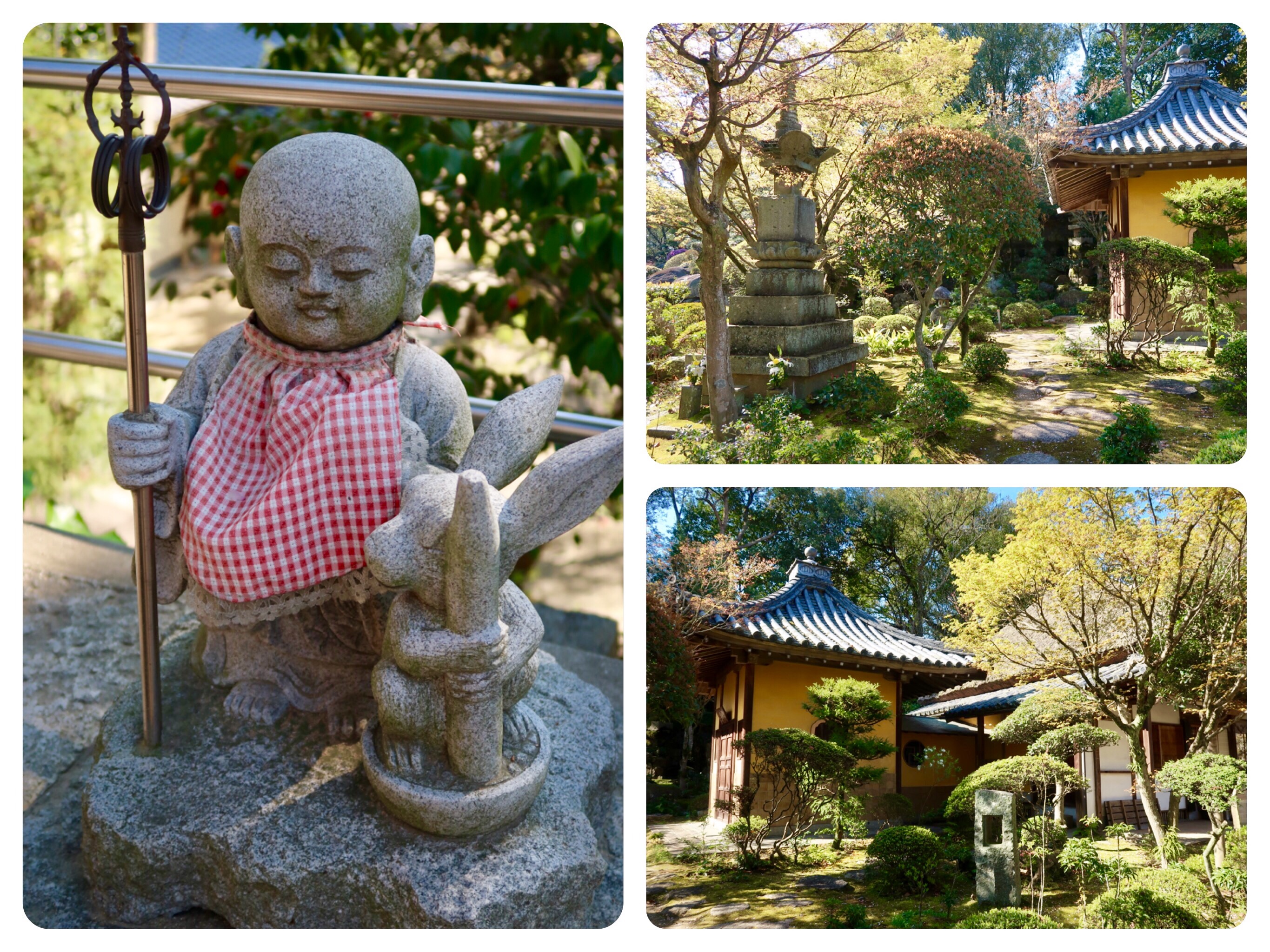 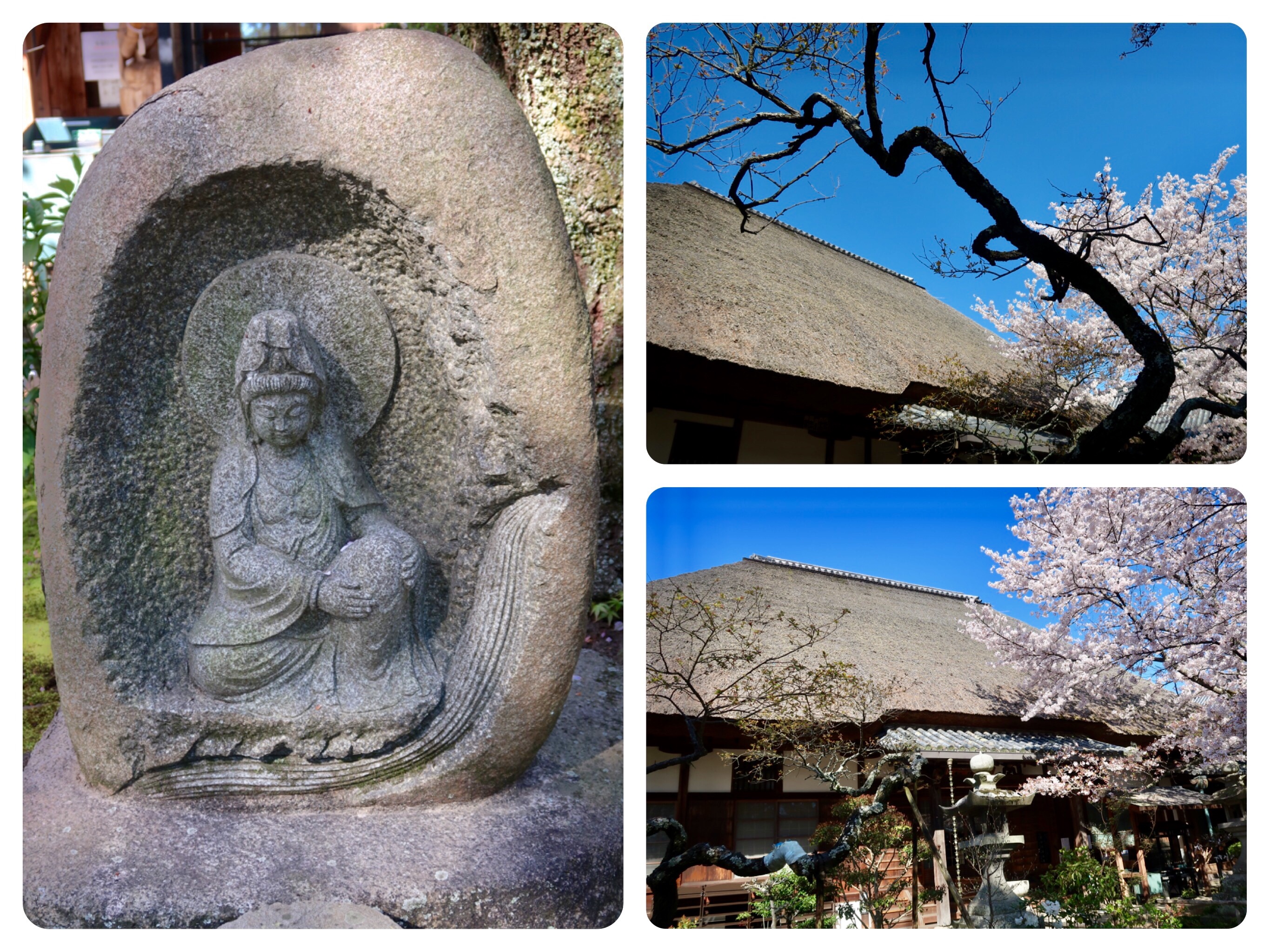 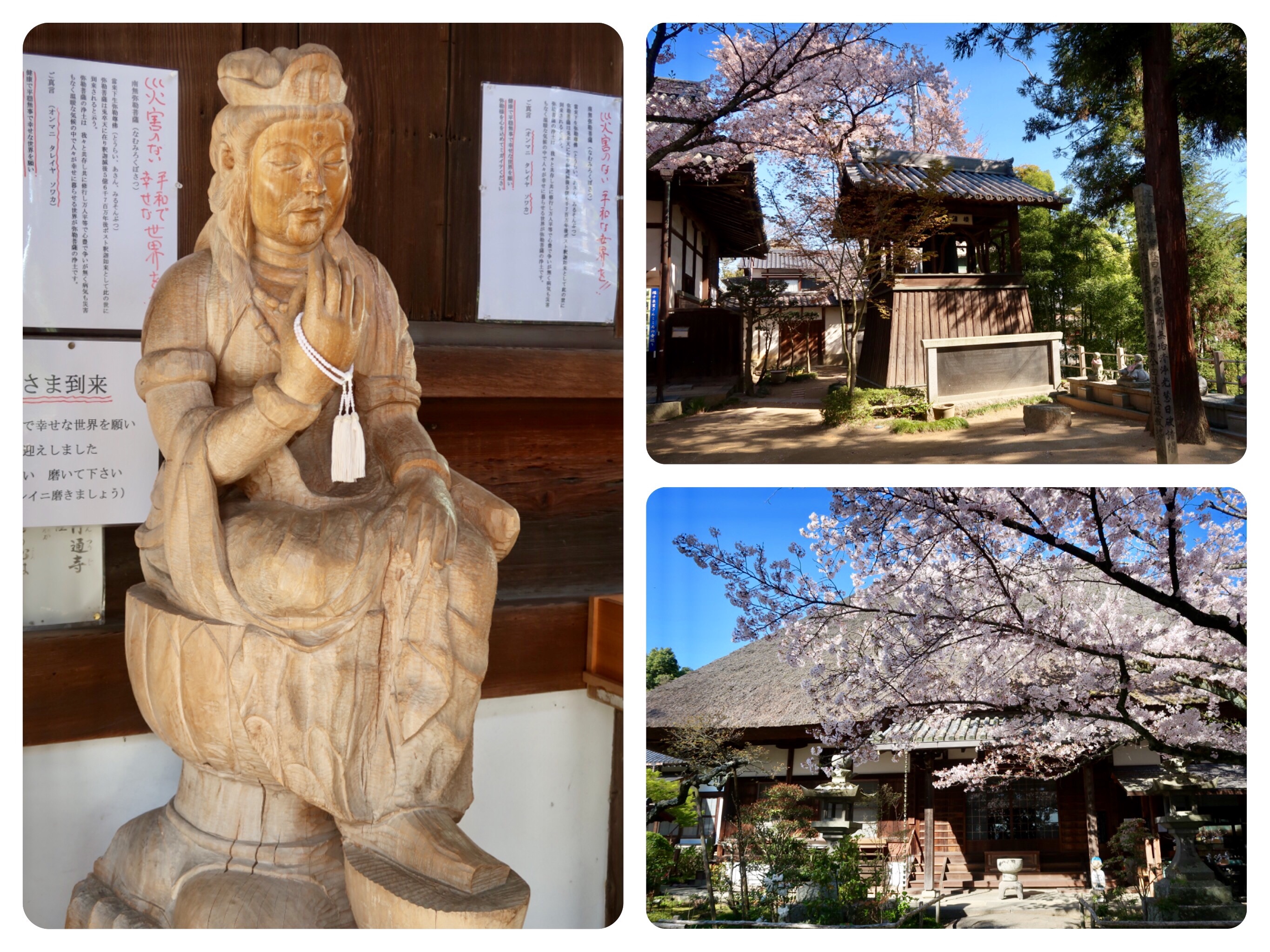 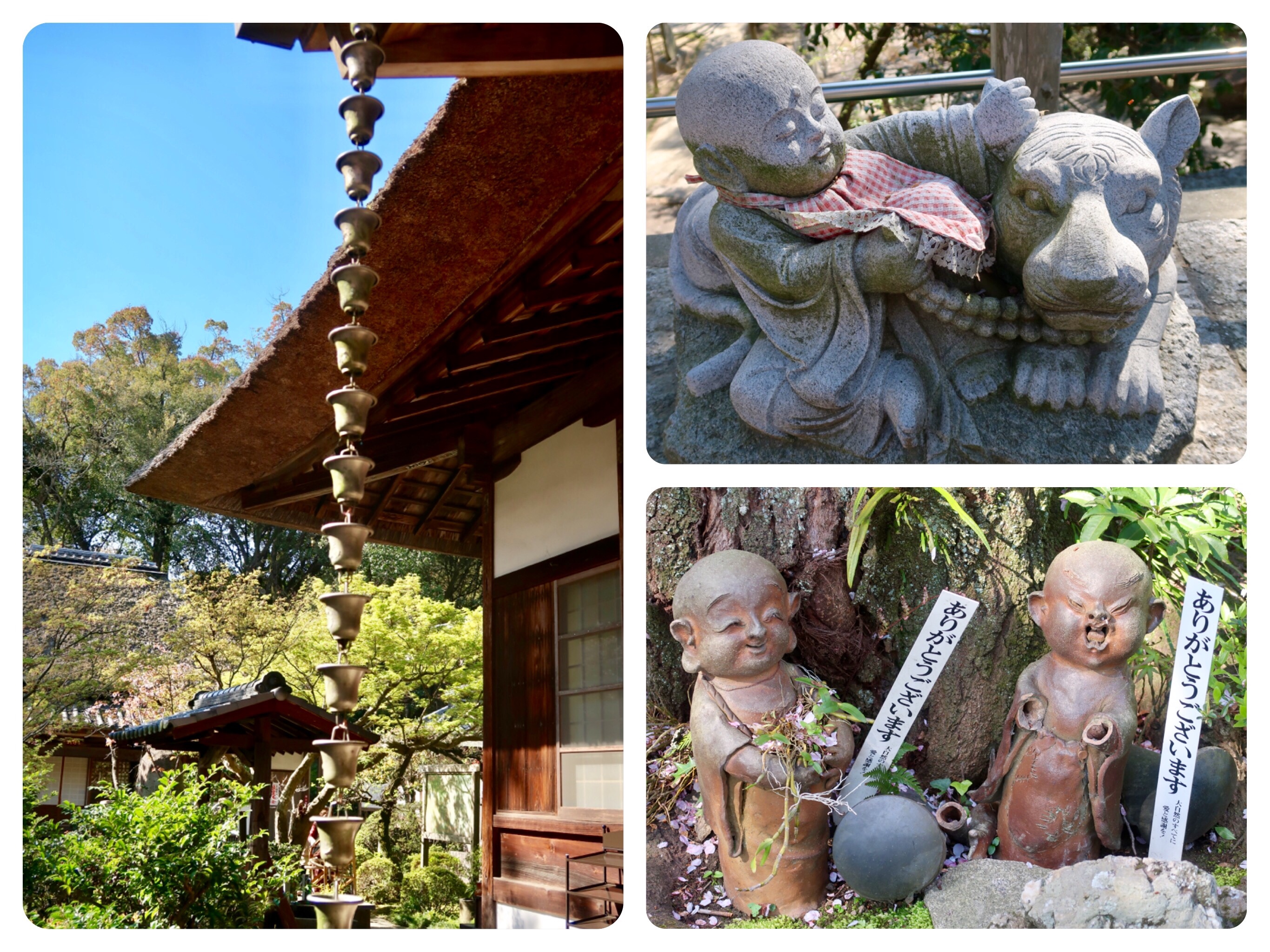 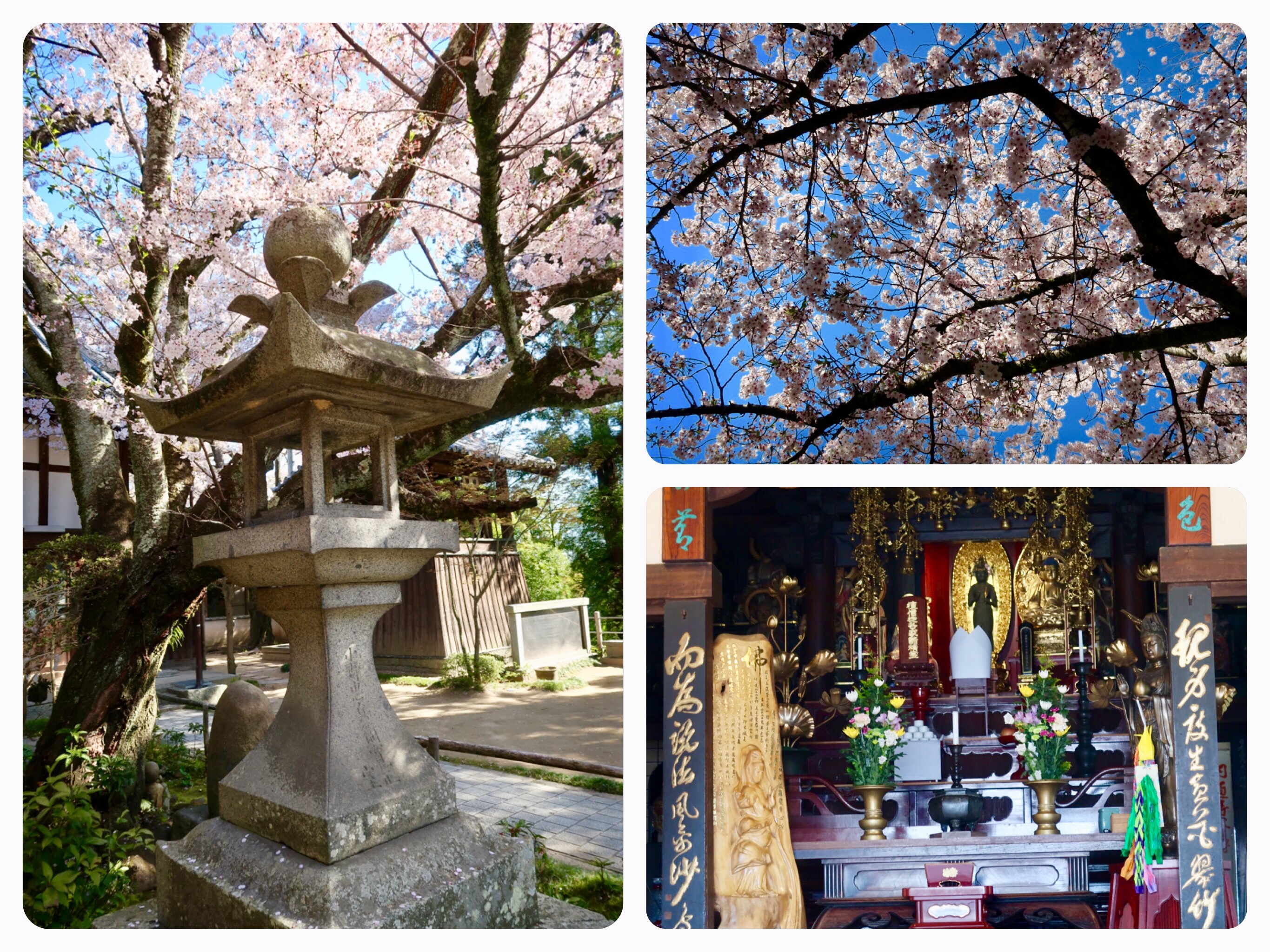 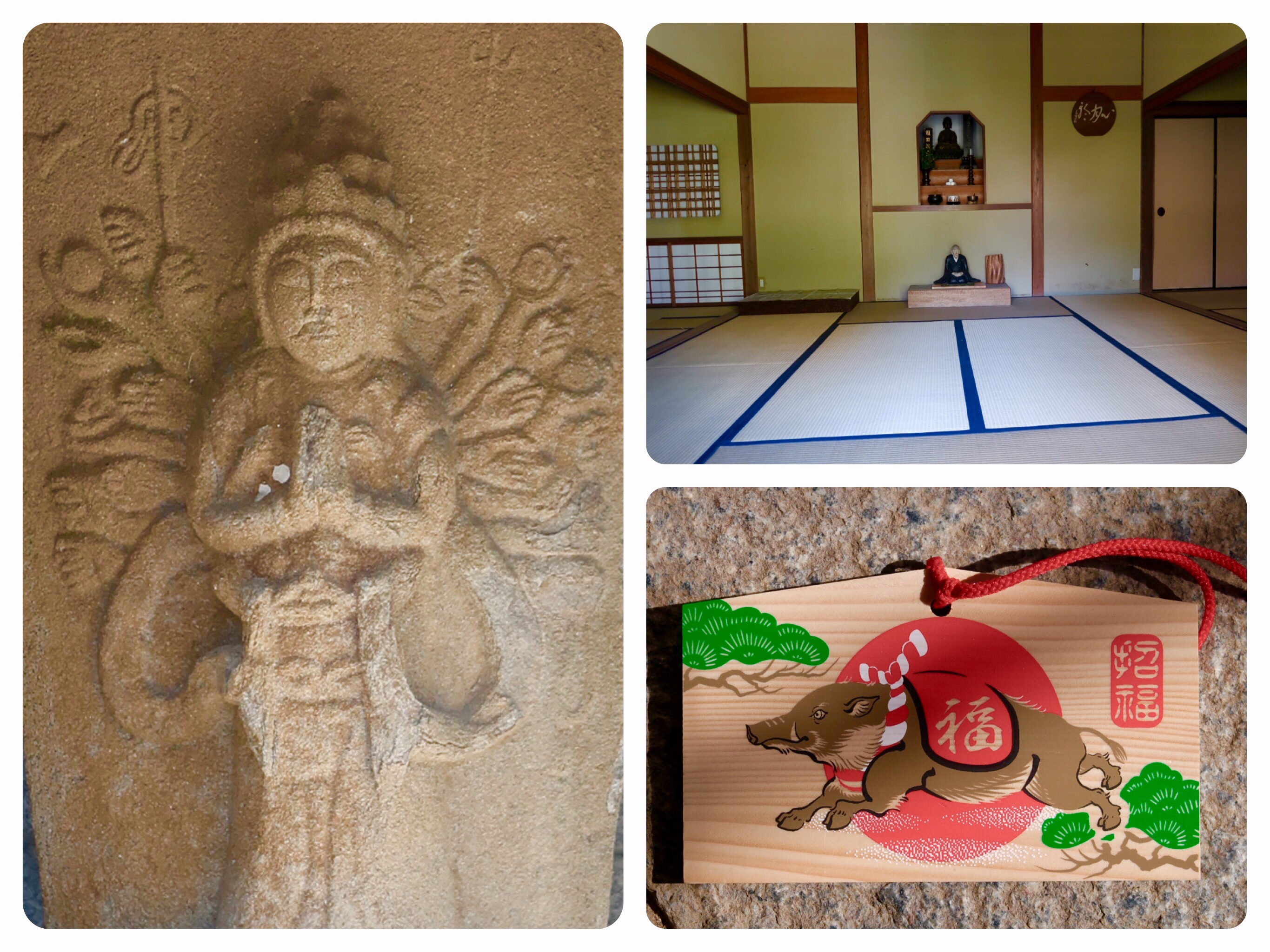 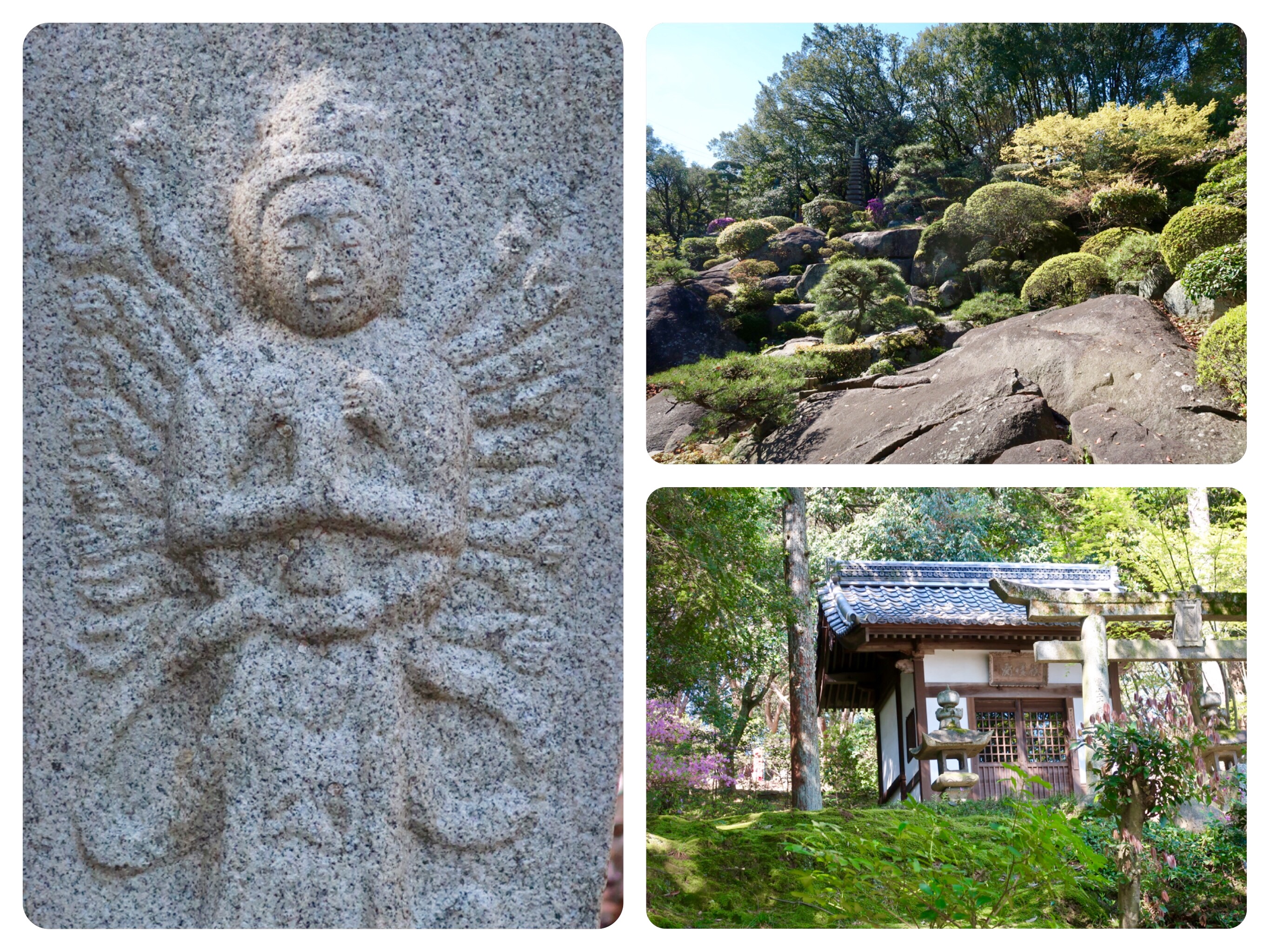 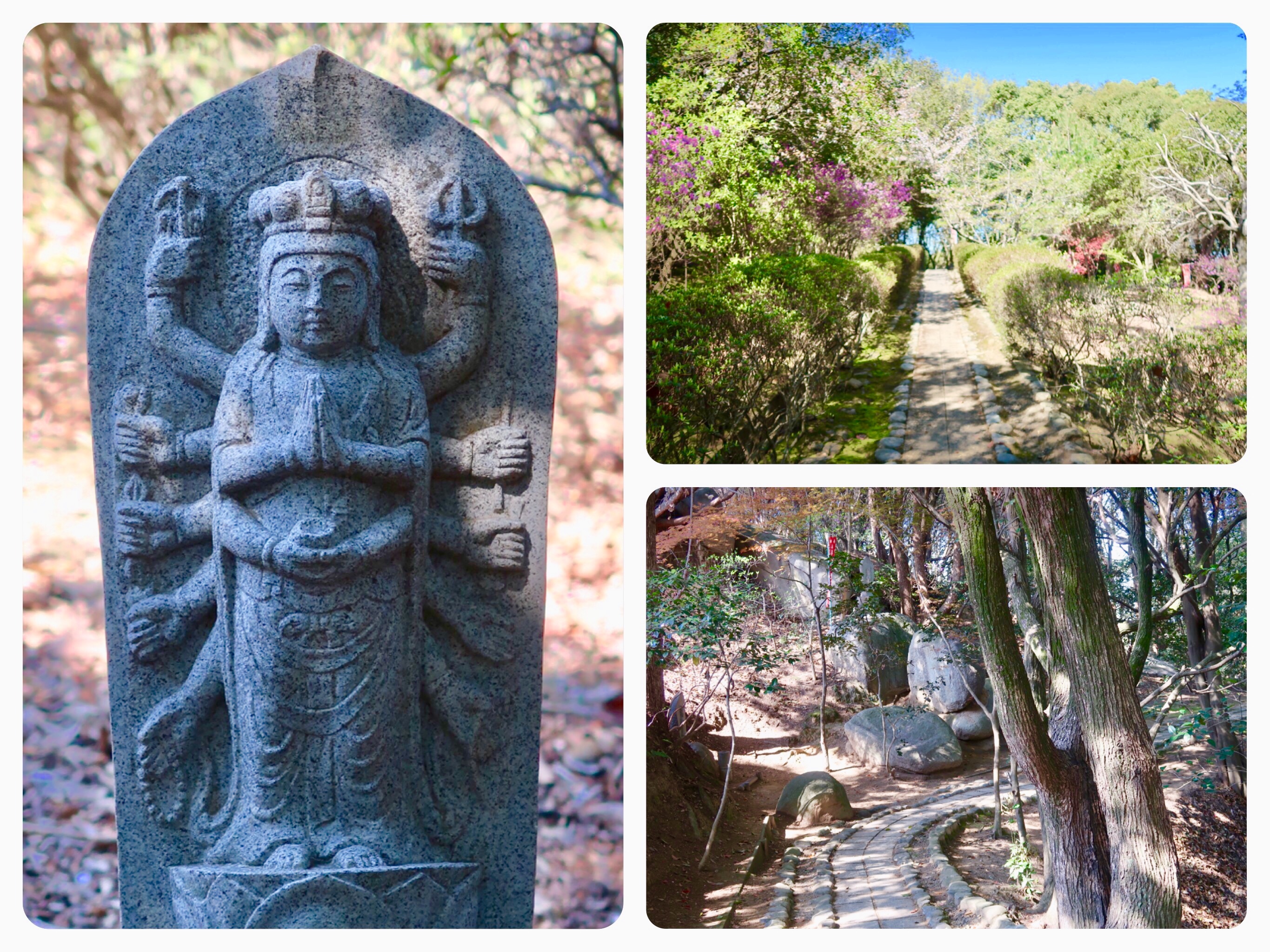 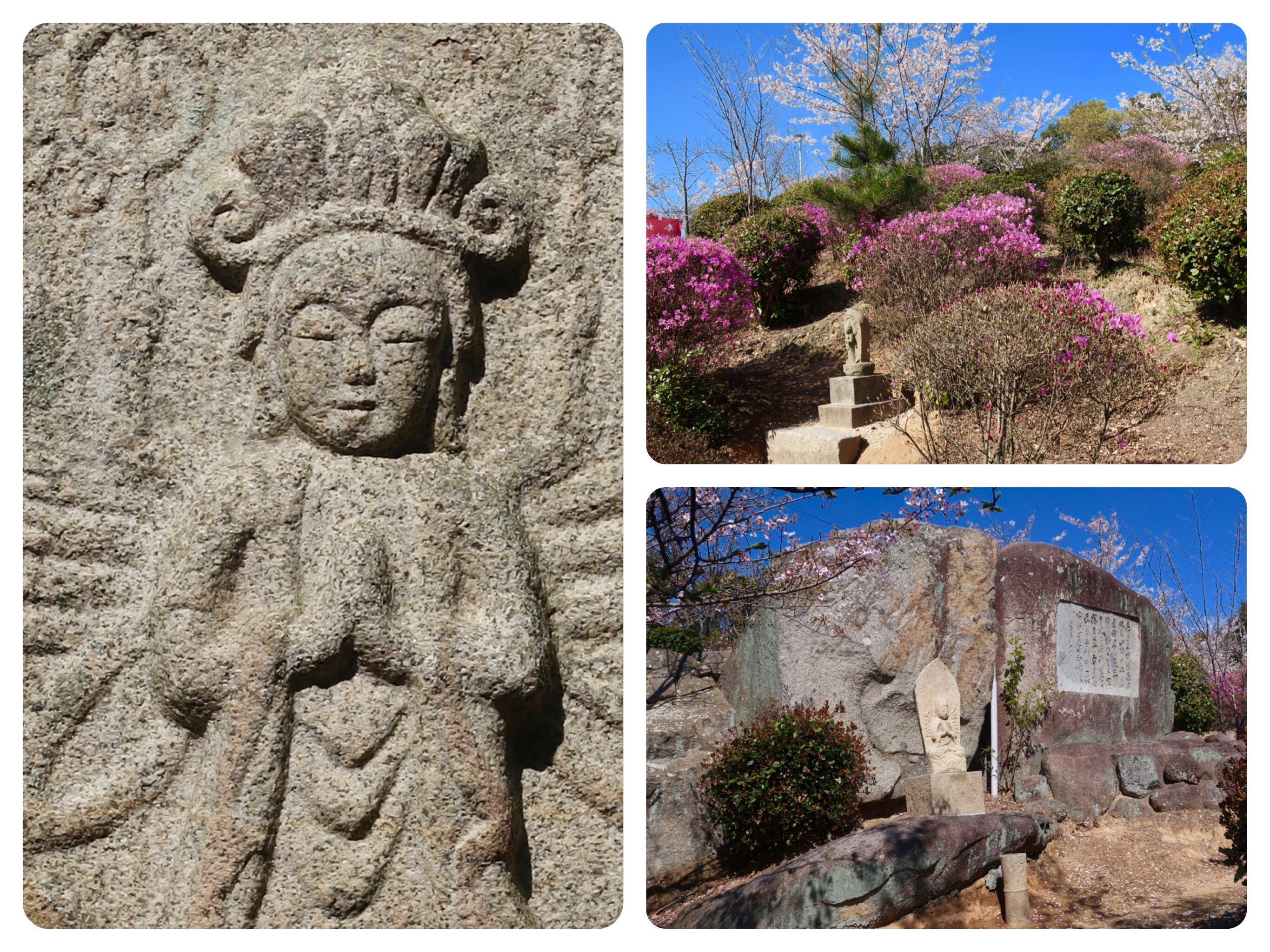 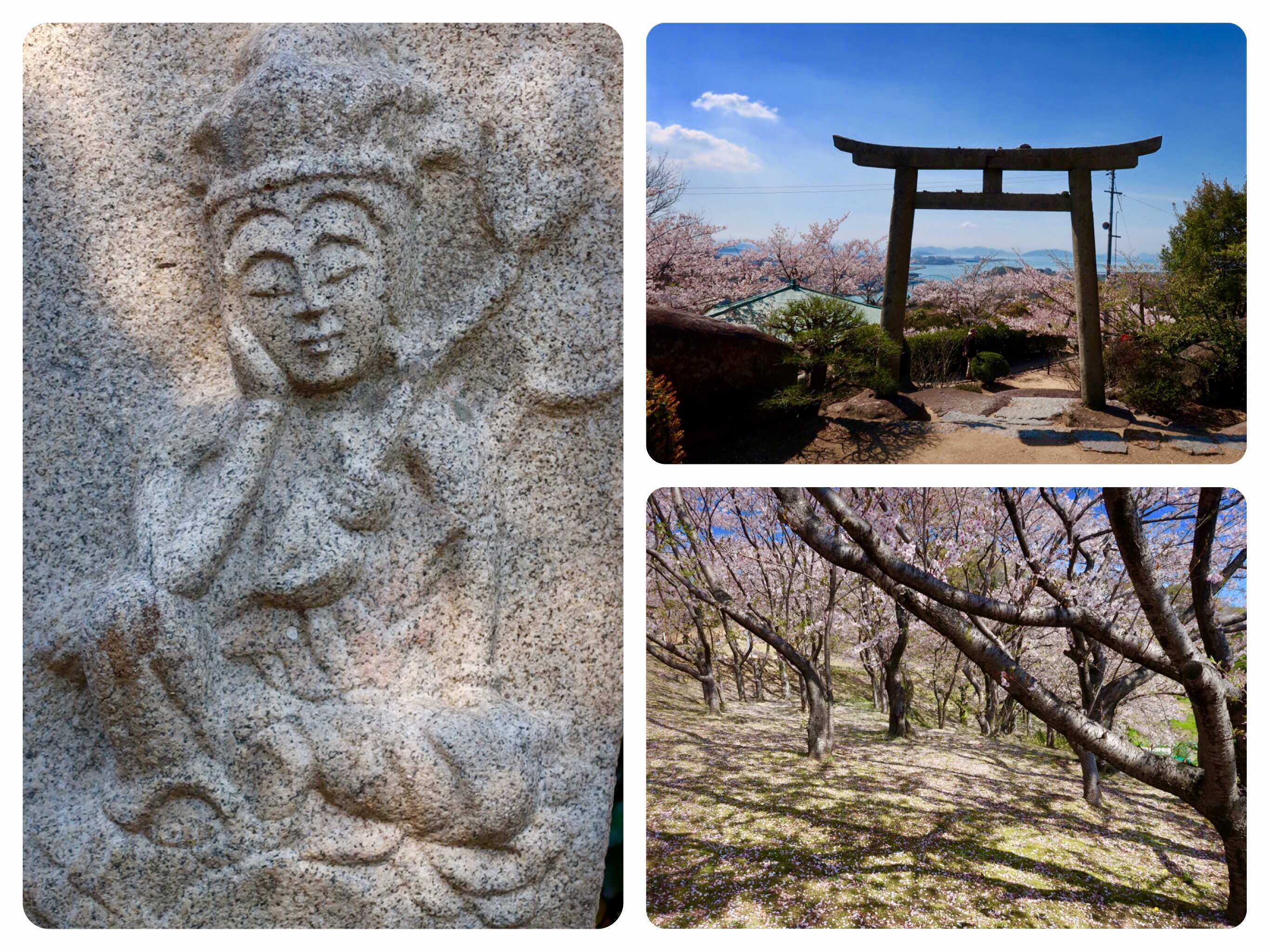 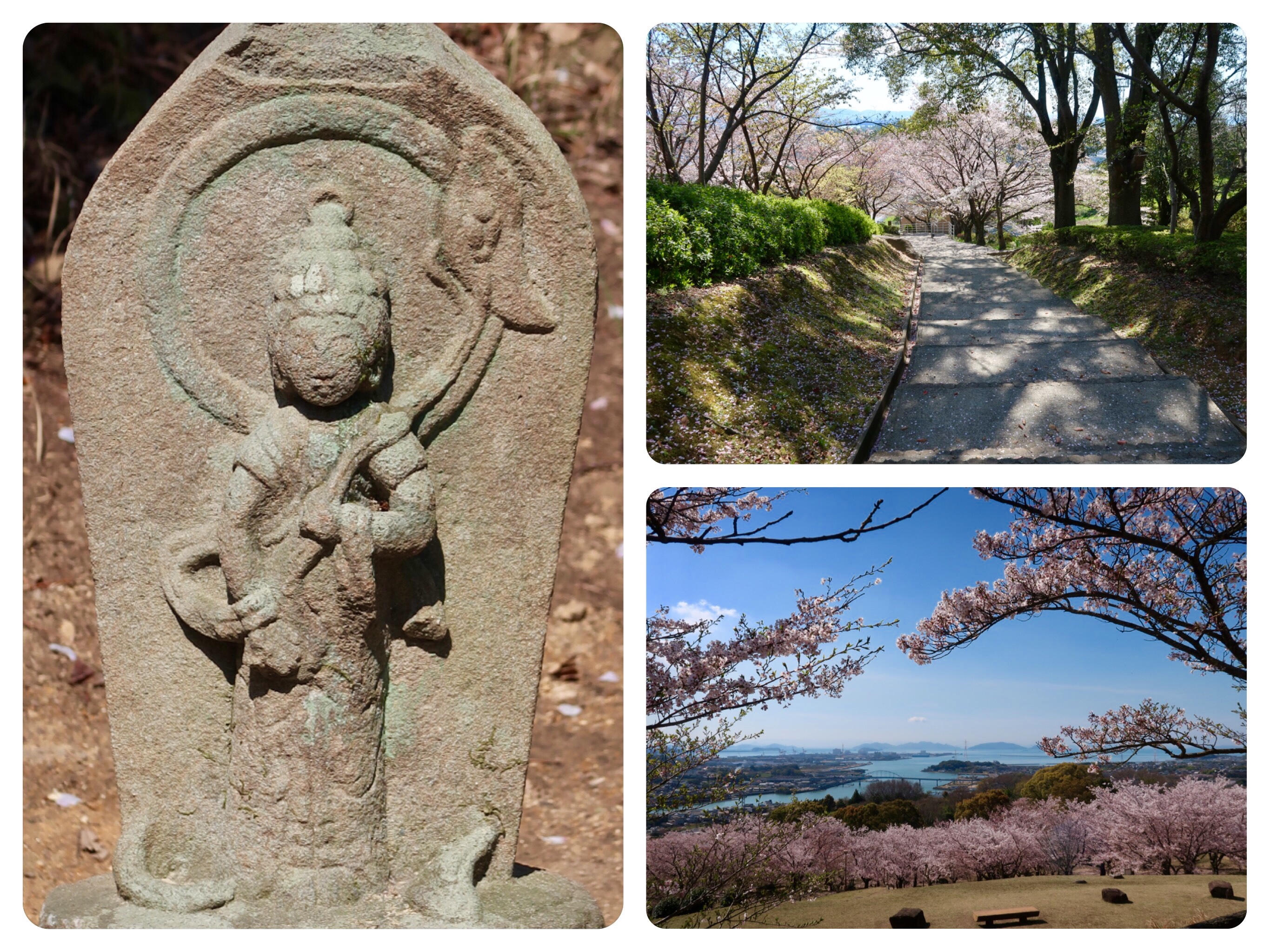 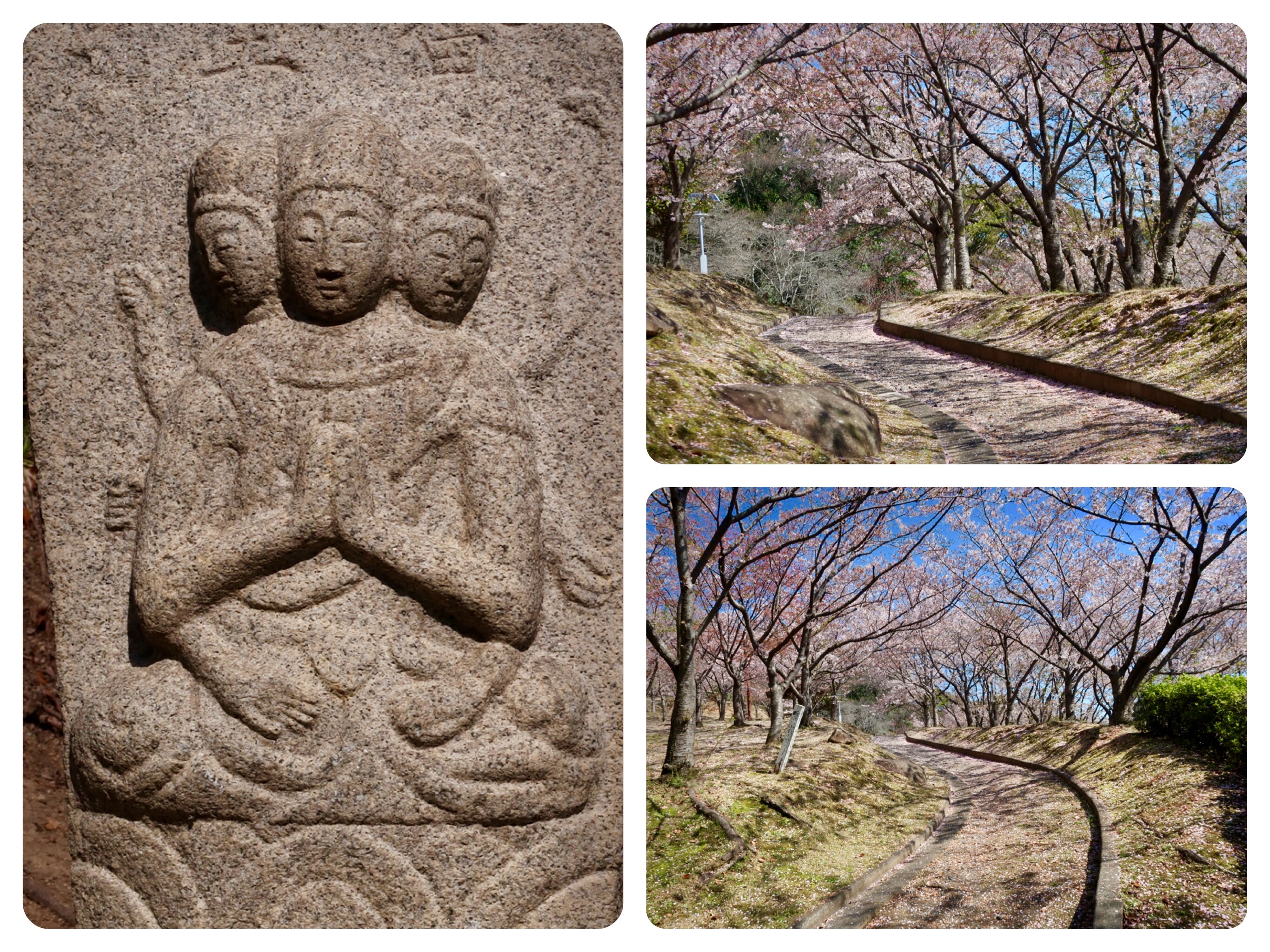 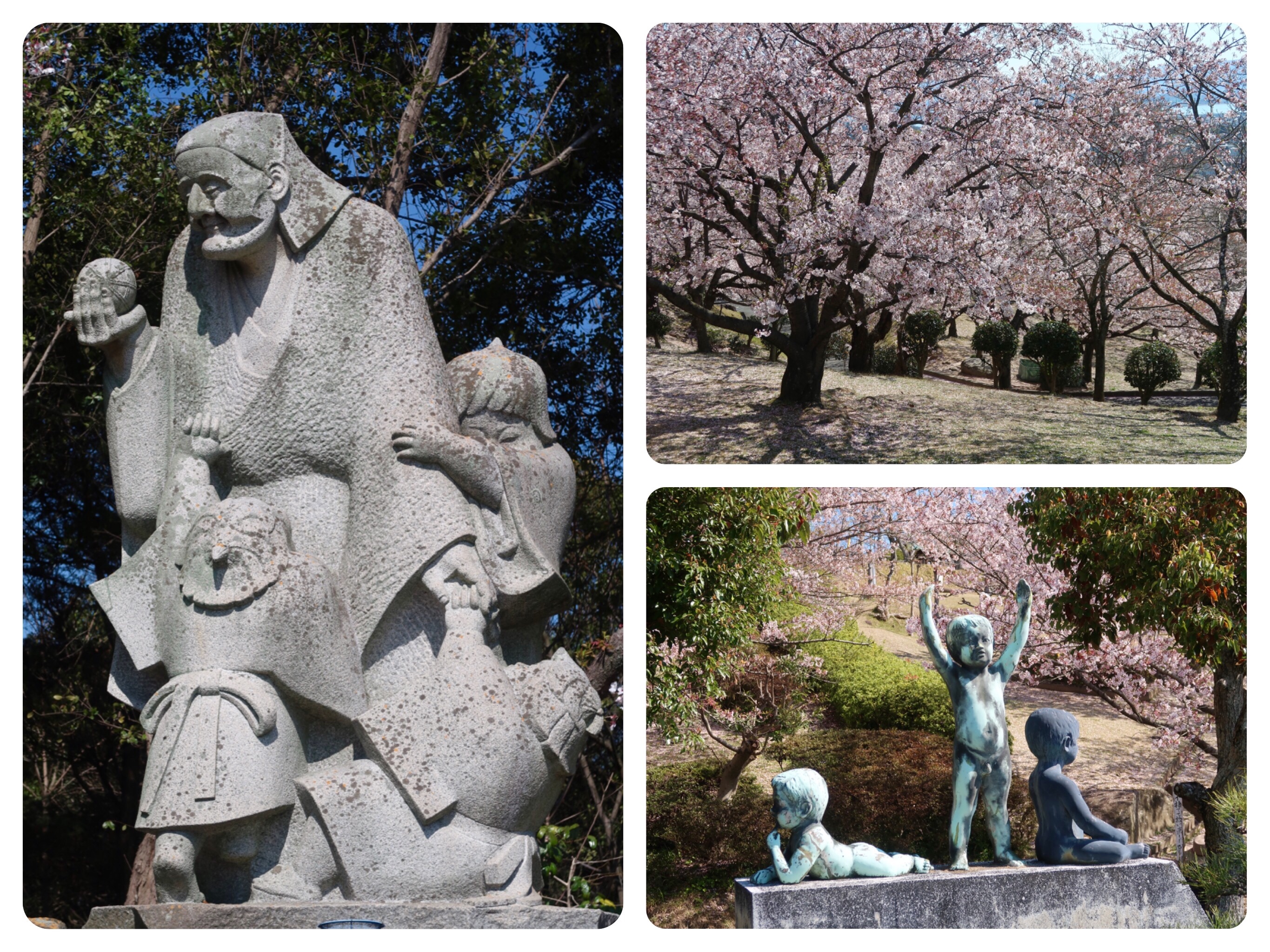 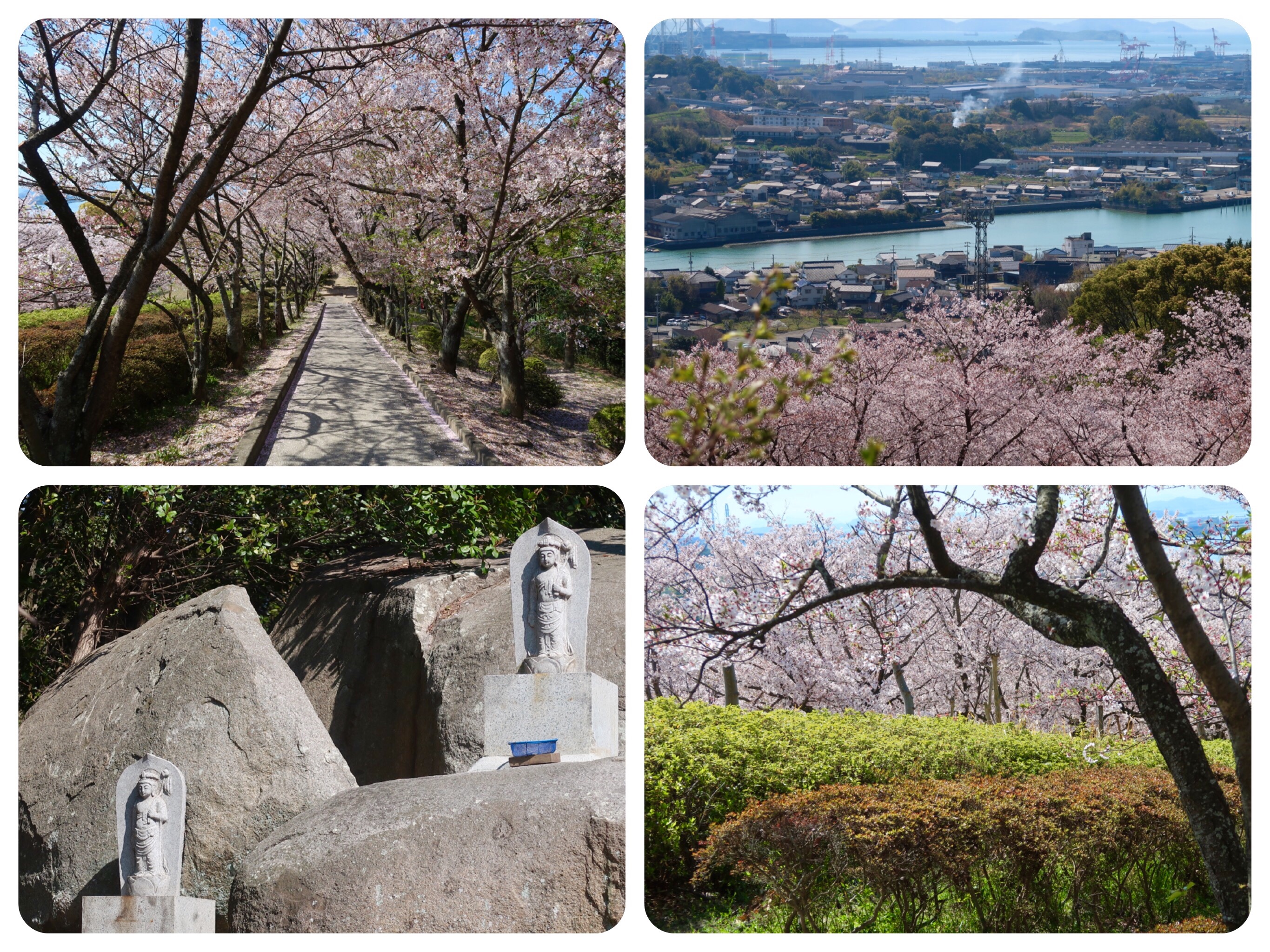 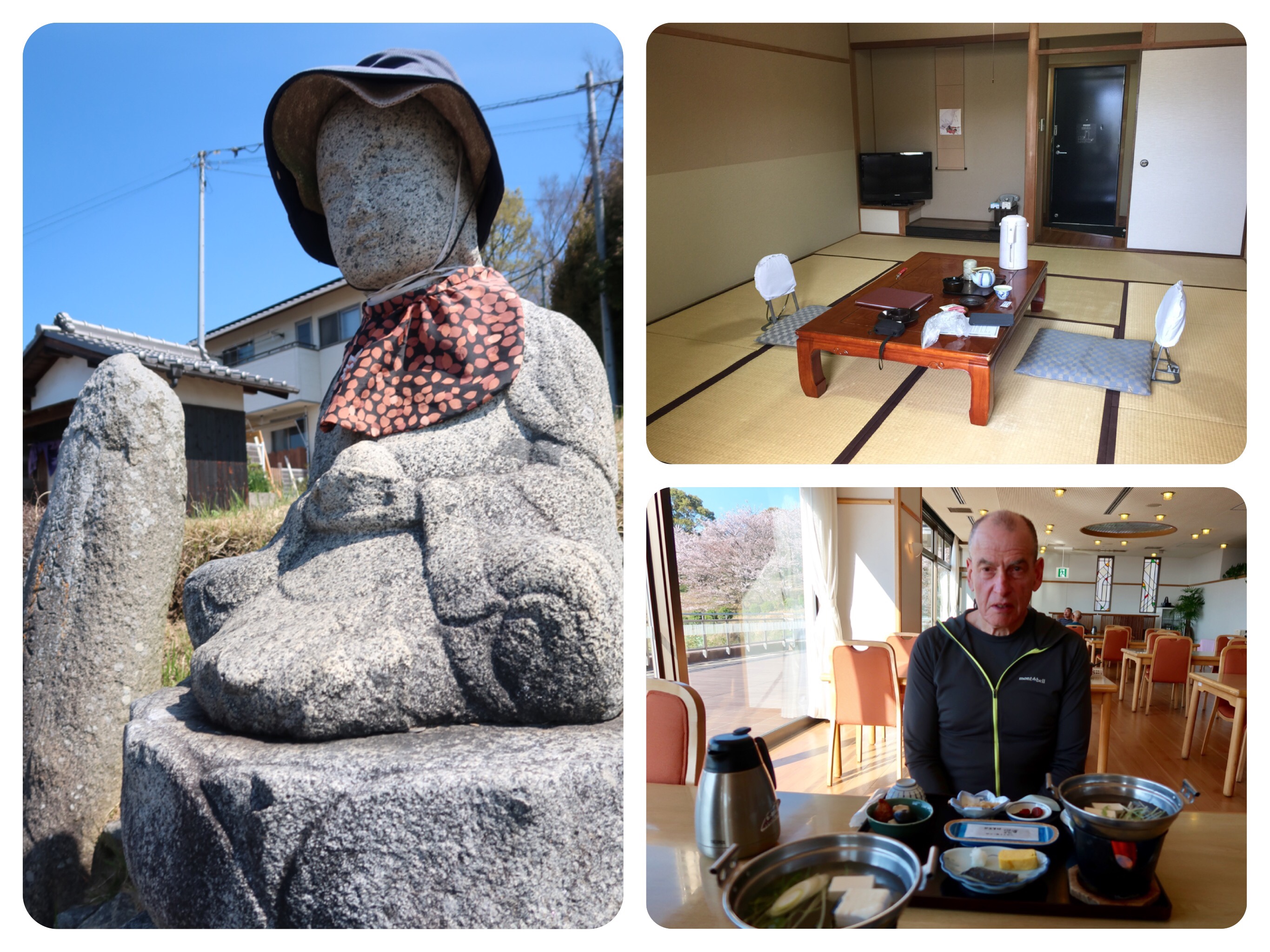 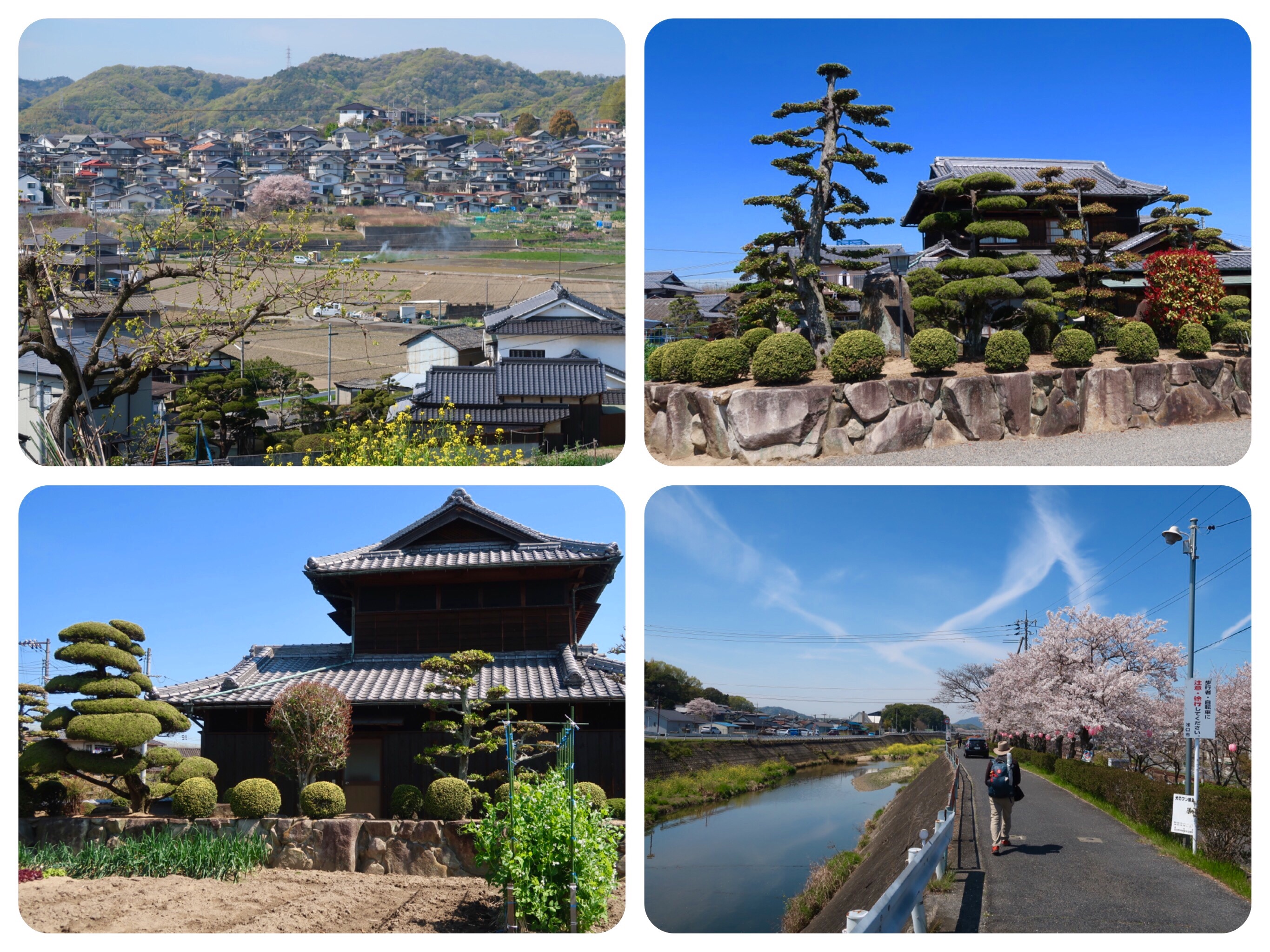 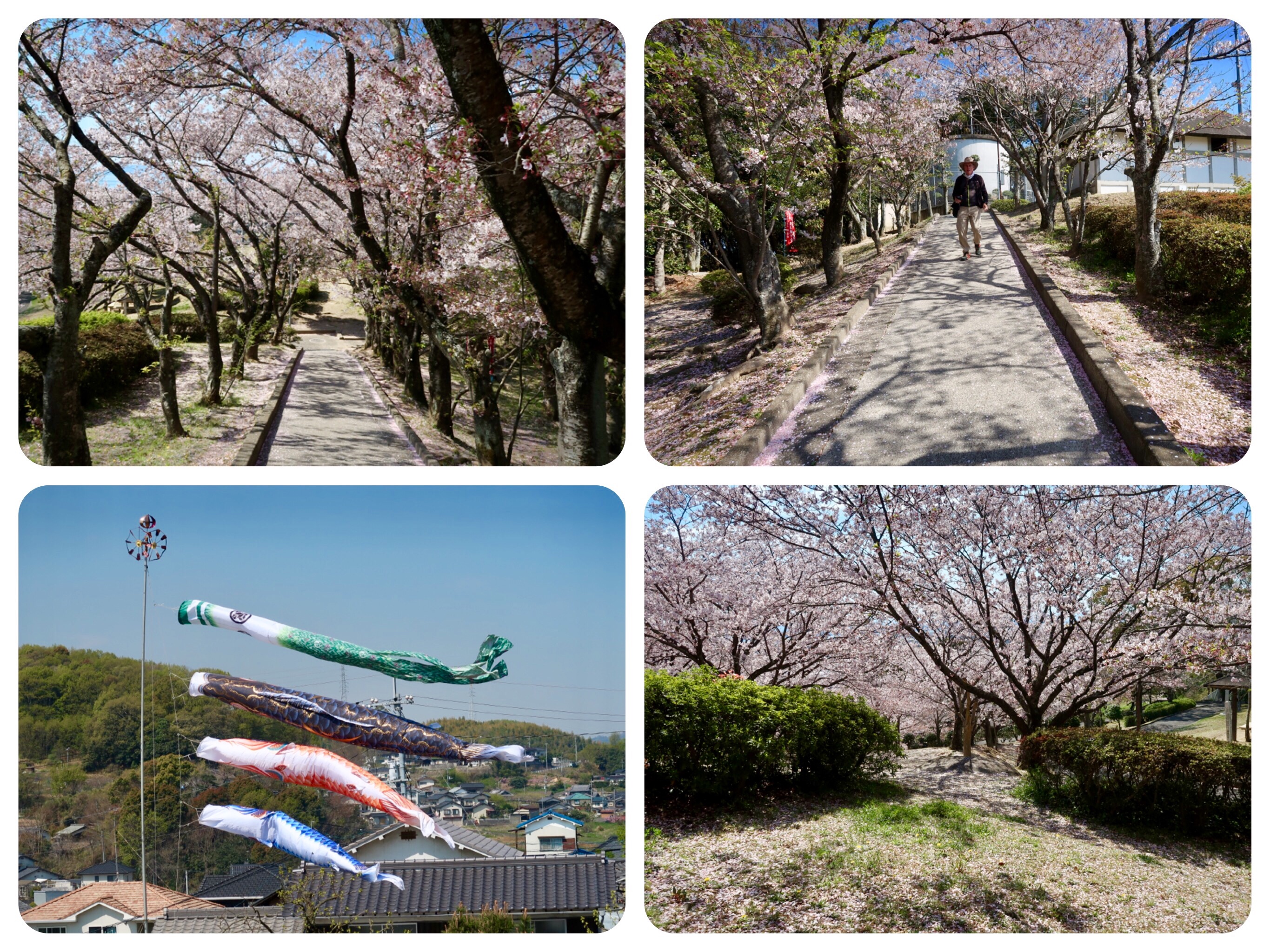 Day 7 – The Chūgoku 33 Temple Kannon Pilgrimage, Japan – The Life and Poetry of The Zen Master Ryokan, and Entsu-ji Temple

Entsu-ji Temple is known as a temple where Ryokan, the famous calligrapher and poetic Zen Master, trained when he was young.

Ryokan was an ascetic Buddhist, believing in the virtues of poverty, in not accumulating, and in relying on the charity of others for his food.

After his training, he did a few pilgrimages to visit famous temples, and finally moved to live in a small mountain hut, in which he meditated and contemplated the Dharma of the Buddha.

Ryokan often went on mountain walks, collecting wood for his fire.
He went down to the villages to beg for food.
Sometimes he wrote calligraphy as gifts in exchange for food.

One story is told that he once asked a poor farmer for some rice in exchange for a blessing he wrote on paper with inked calligraphy symbols, of the sky, the heavens and success.

The farmer gave Ryokan the rice, but he said:
“You keep your fancy symbols.
I am not an educated man.
I am a simple farmer who knows how to till the earth.
I cannot read.
Draw me something that I can understand.”

So Ryokan drew the first few symbols every kid learns how to write first.
He drew the simple symbols for the numbers one, two, and three, which are just parallel short lines (ー 二 三).
This simple piece of calligraphy is now very famous.

We got up early and walked up to Entsu-ji temple, along a path lined with beautiful Sakura trees in full bloom.
The small mountain is filled with stone sculptures and a very large stone statue of Ryokan, playing with young kids, as he used to do.

Entsuji‘s main hall has a beautifully thick thatched roof.
An old priest stamped our pilgrim’s book and scroll.
He couldn’t believe we were walking the pilgrimage and asked twice if we planned to do it by car.
Then he bowed and wished us a good journey.
He went to the back and came back with a gift of an Ema.

Ema (絵馬) are small wooden plaques, common in Japanese Buddhist and Shinto traditions. Worshippers write prayers or wishes on the plaques.
The ema is then hung on a tree or on designated poles where the Kami, (the Spirits or Gods) are believed to receive them.

The painted images on the Ema are usually of animals, or symbols from the Zodiac.
The practice was derived from ancient times, in which people would donate actual animals and horses to the shrines and temples, for good favors from the Gods.

Over time, this practice was transferred to a wooden plaque with a picture of a horse, and later still to the various wooden plaques sold today for the same purpose.
Once inscribed with a prayer, Ema are hung at the shrine until they are ritually burned at special events, symbolic of the liberation of the wish from the writer.

Mt. Sugurusan, where Entsu-ji Temple is located, has been a holy Goddess Kannon site since the old days of Nara.
An ancient Kannon statue from the early days of the temple in the year 700 A.D. is enshrined here, and people have been worshiping it for over 1300 years.

In the middle of the Edo or Tokugawa period, (1603-1868) the Kannon hall was destroyed and the Kannon deteriorated, being exposed to rain and sun.

At that time, it was believed that disasters and plagues, floods and heavy rains, were caused by the neglect of the Goddess Kannon.

A high priest named Tokusho Ryotaka Kazuho, ​​happened to be staying near here.
With the cooperation of nearby temples and the help of 100 villagers, he rebuilt the main hall of the temple, the Kannon-Do.

The temple was called Entsui, then the name was changed to Entsu-ji, and many high monks came to live there.

It was a high ranking temple when Ryokan trained here.
He trained in the Buddhist mountain traditions from the ages of twenty-two to thirty-eight.
When he left to walk pilgrimages and later to become a mountain hermit, he lost the protection of the temple affiliation.

If he was wandering through a village or a city when a crime was committed, Ryokan was often arrested as a suspect, and only released when the real criminal was found.
Ryokan took it all in good nature, never showing anger or frustration, never claiming to be an important priest from a well connected temple.

In former days, in Japan, there were rather many Buddhist monks who led a secluded life. Some lived among the remoter mountains and disciplined themselves in many rigid and severe ways.
Kobo Daishi was one of these Buddhist Masters.

Many other monks were exceptional, but their names have been forgotten by the passing of time.
Ryōkan was different.
He spent a good part of his life among the lonely mountains all by himself, leading a simple life.
Living in this way, he came to see clearly how vitally important it is to love others since after all, love is everything.

In the silence of his isolation, he became one with the mountains, rocks, streams, pines, cedars, bushes, and with the white clouds hovering about the mountaintops.

Ryokanso, the Mountain Inn where we have just stayed, had an exhibition of Ryokan’s calligraphy.
The main hall of the temple has a large bronze statue of Ryokan.

The temple is magnificent, and so is the mountain it stands on.
I read two books about Ryokan before we embarked on this pilgrimage, because I knew we would be staying right on the mountain where he trained.

It was a magical experience for me.
But I wish to let Ryokan say the last words… so I am adding some of his poetry below:

One of the first poems of Ryokan that I read, loved and even thought that it could apply to describe me, is called, “No Change.”

“Last year,
A fool roaming around looking for enlightenment
This year,
No change!”

“Yes, I’m truly a fool
Living among trees and plants.
Please don’t ask me about illusions or enlightenment –
This old fool just likes to smile to himself.

I wade across streams with bony legs,
And carry a bag about in fine spring weather.
That’s my life,
And the world owes me nothing.”

****
In his youth, Ryokan found a teacher named Kokusen Roshi.
He practiced under Kokusen’s guidance and became his favorite student.
Upon Kokusen’s death Ryōkan inherited his temple.
But the duties and confines of a temple life did not fit the wandering monk.

“Down in the village
the din of
flute and drum,
here deep in the mountain
everywhere the sound of the pines.
Wild peonies
Now at their peak in
Glorious full bloom.
Too precious to pick.
Too precious not to pick.”

He traveled as a pilgrim for five years before settling in a simple hut and living as a hermit, alone in the woods in the snowy country of Mt. Kugami.

Slopes of Mount Kugami,
in the mountain’s shade
A hut beneath the trees
how many years it’s been my home?
The time comes to take leave of it
my thoughts wilt like summer grasses.
I wander back and forth like the evening star
till that hut of mine is hidden from sight,
till that grove of trees can no longer be seen,
at each bend of the long road,
at every turn,
I turn to look back
in the direction of that mountain.”

****
“Late at night, listening to the winter rain
Recalling my youth,
Was it only a dream?
Was I really young once?”

****
“My house is buried in the deepest recess of the forest
Every year, ivy vines grow longer than the year before.
Undisturbed by the affairs of the world,
I live at ease.
Woodmen’s singing rarely reaching me through the trees.
While the sun stays in the sky,
I mend my torn clothes.
And facing the moon,
I read holy texts aloud to myself.
Let me drop a word of advice for believers in my faith.
To enjoy life’s immensity,
you do not need many things.”

“Midsummer,
I walk about with my staff.
An old farmers spots me
And calls me over for a drink.
We sit in the fields
using leaves for plates.
Pleasantly drunk and so happy
I drift off peacefully
Sprawled out on the edge of a rice field.”

At the age of 70 Ryōkan met a young female Zen student named Teishin.
Although she was only 28, their bond was deep and spiritual and they wrote several love poems to each other.
Ryokan wrote in one of his letters to Teishin: “if people will read our letters, they might think we are lovers.”

When Ryōkan lay dying, Teishin came to be with him and held him until he passed away.

Ryōkan had no desire for fame, power or recognition and did not seek to publish his poems.

Teishin collected and published them after his death.
We owe her, for keeping meticulous records of what was left of his poems and calligraphy.

Empty and fleeting
My years are gone
And now, quivering and frail,
I fade away.
My legacy…
What will it be?
Flowers in spring,
The cuckoo in summer,
And the crimson maple leaves in autumn…”

From Entsu- ji temple, we walked towards Onomichi, to complete the section of the path that we started walking the day before.

Warm blessings to you,
Tali