The Chūgoku 33 Kannon Pilgrimage, Japan – Arriving in Kobe, a Rat Falls from the Ceiling, and the Art of Kyosai 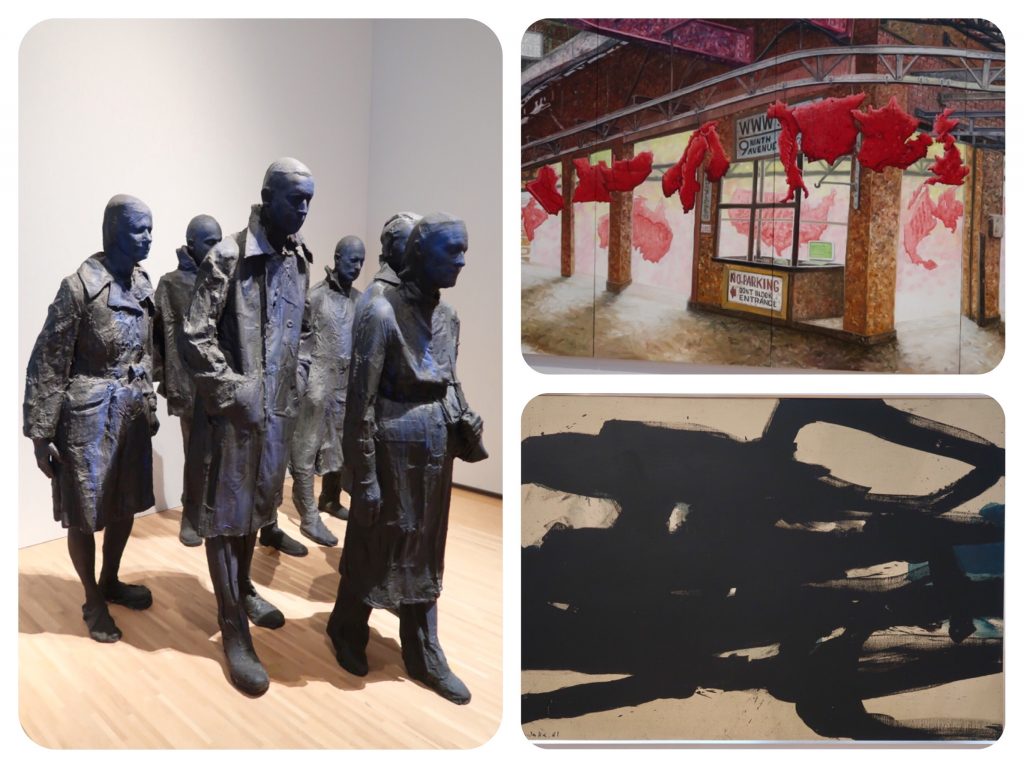 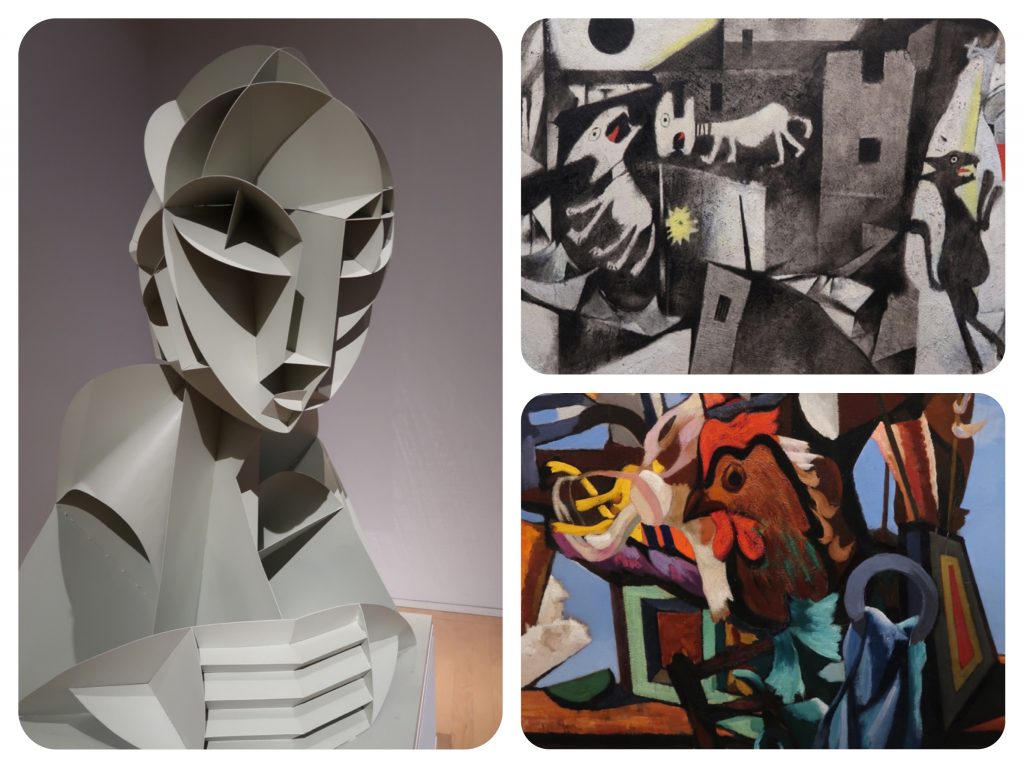 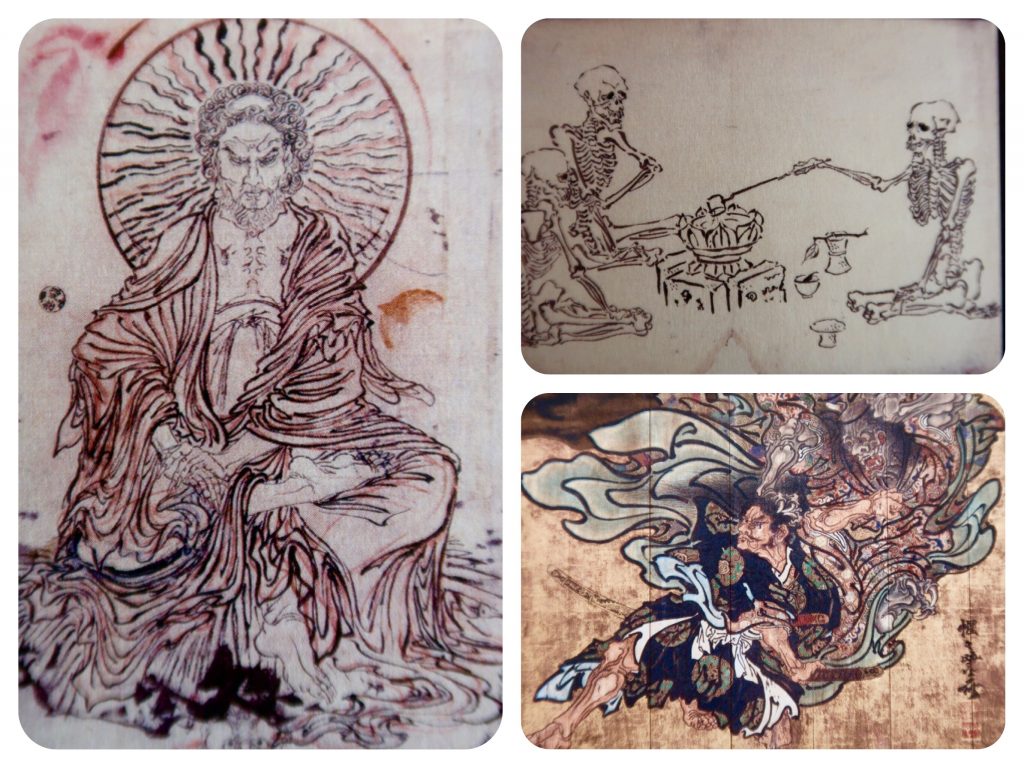 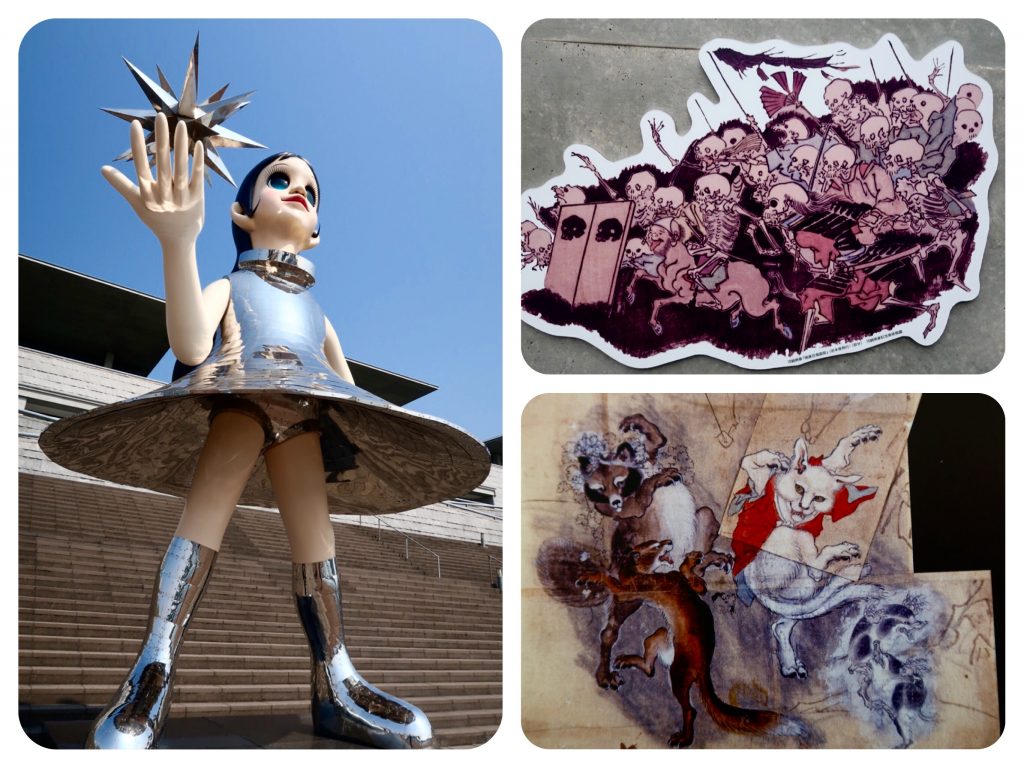 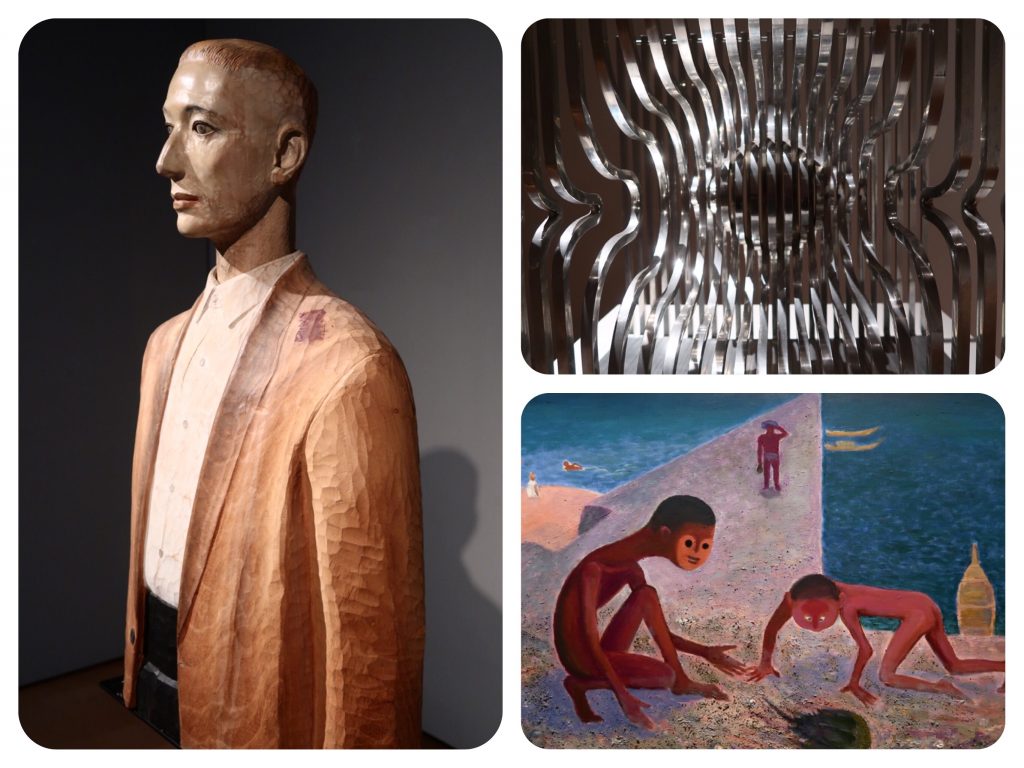 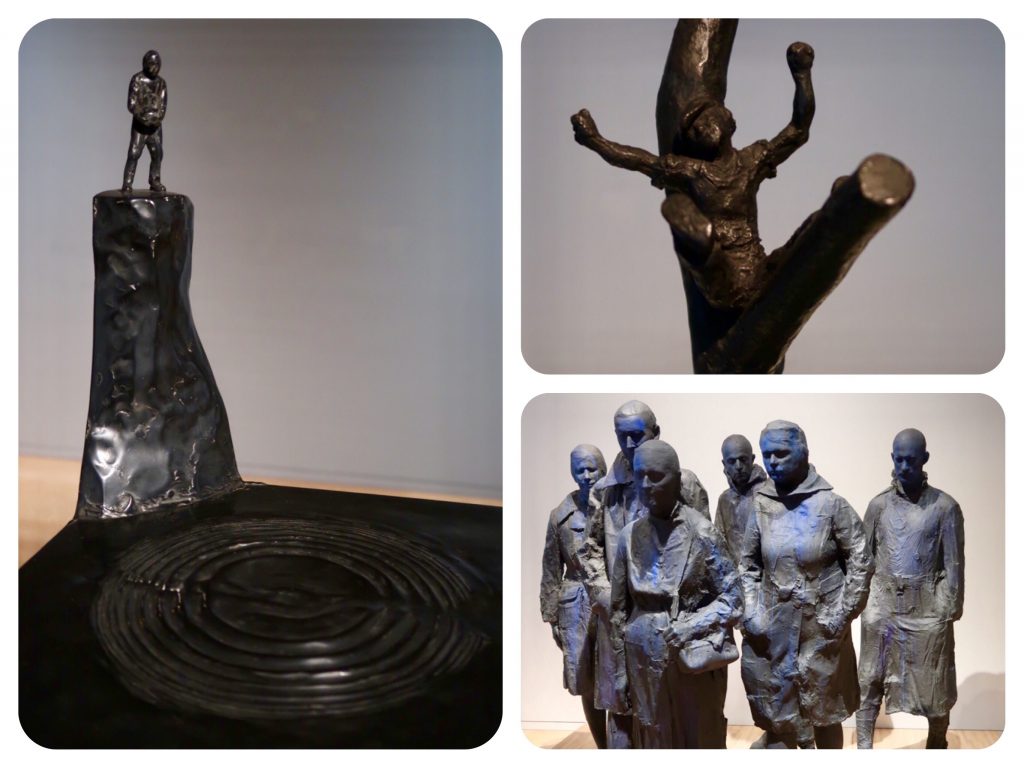 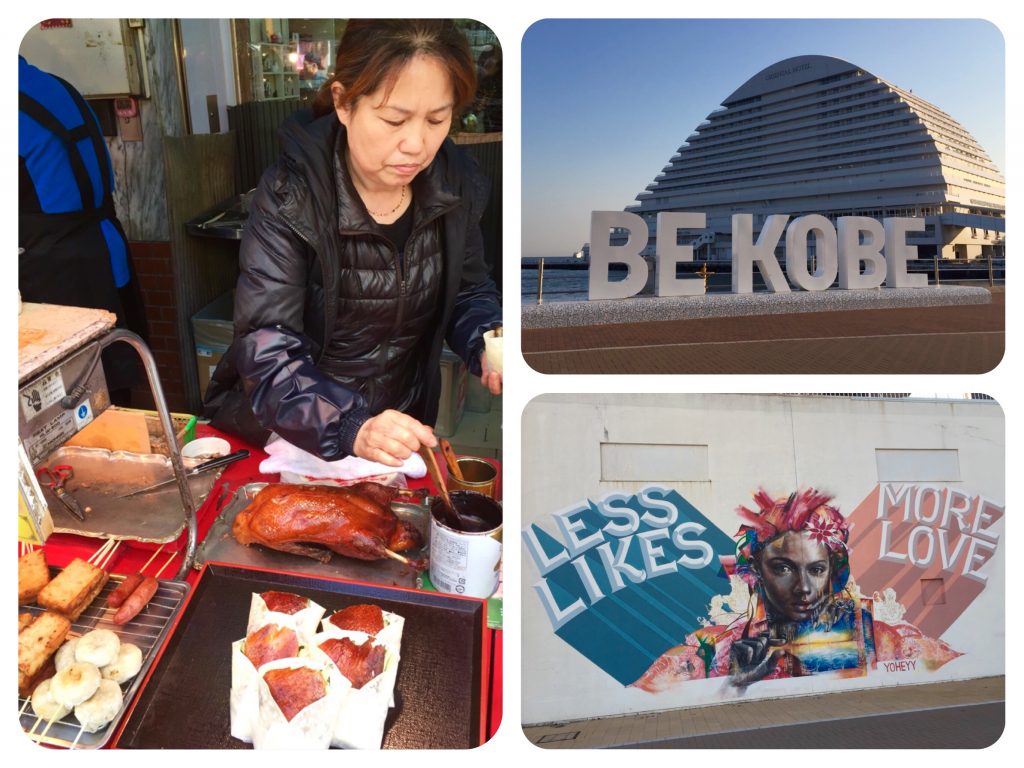 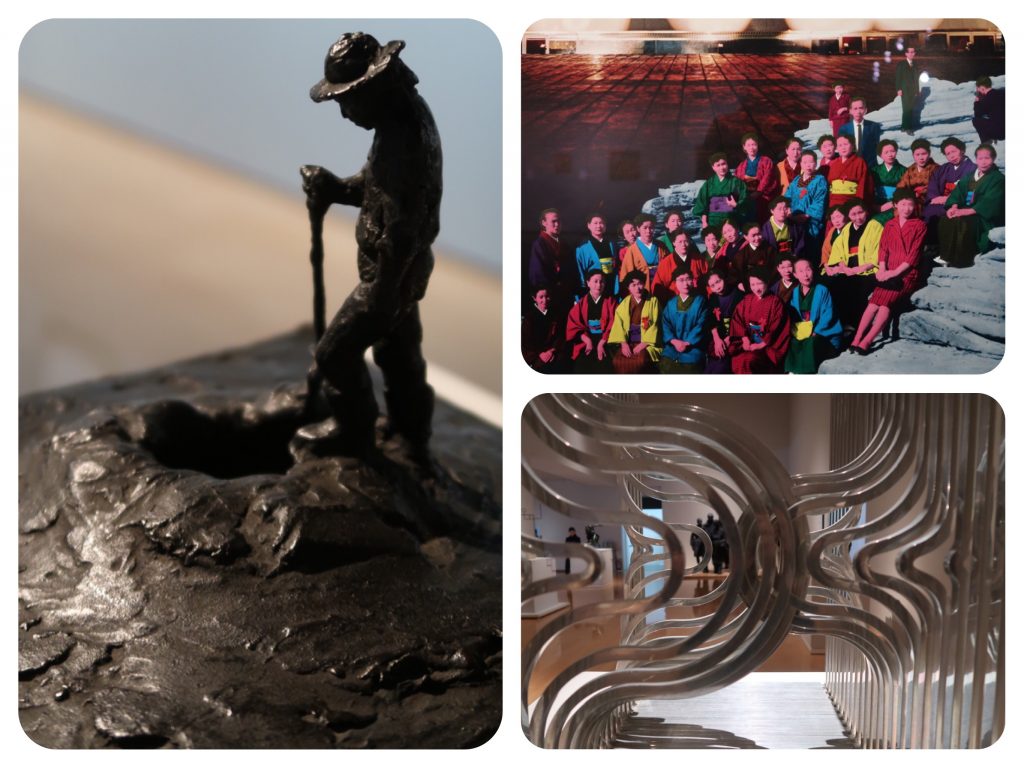 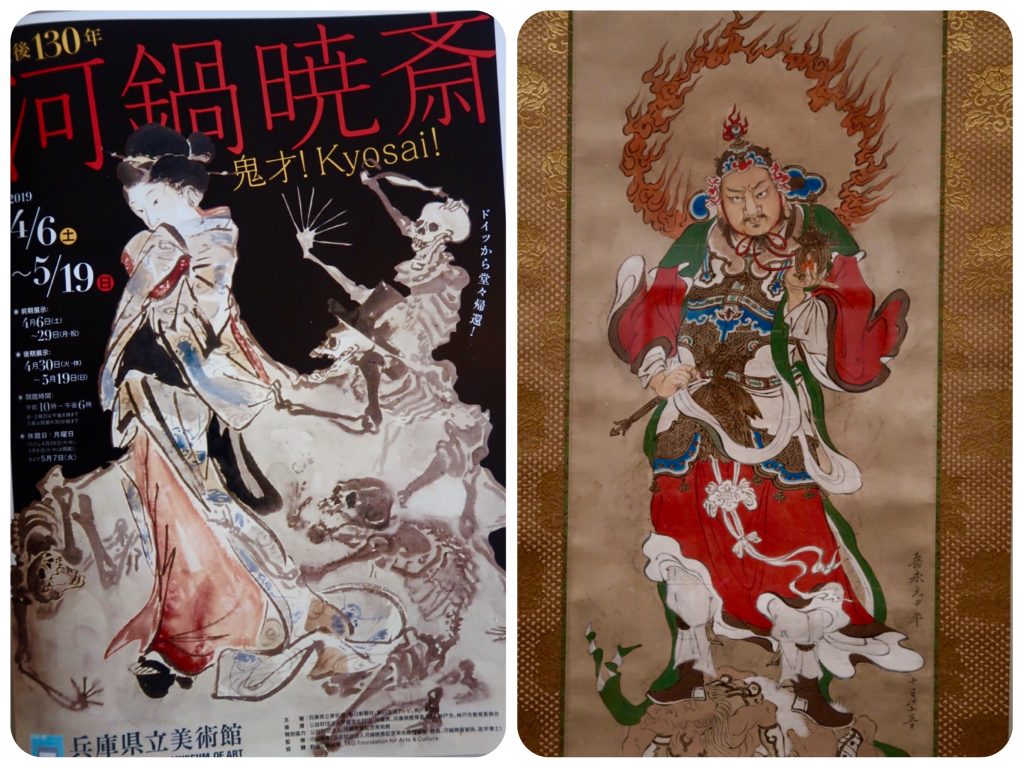 The Chūgoku 33 Kannon Pilgrimage, Japan – Arriving in Kobe, a Rat Falls from the Ceiling, and the Art of Kyosai

Arriving in Japan was a bit disorienting.

Everywhere there are SO many people, all busy and well-versed in navigating busy streets, crossroads, trains and subway stations.

After three months in the isolated, snowy mountains of Colorado, I felt a bit overwhelmed by the hum of the city, the sirens of the emergency vehicles, the loudspeakers announcing political candidates, the noisy Pachinko parlors, and other markers of life in the urban core.

We landed in Osaka and spent one night in the city center.

The next morning we had a delicious Japanese breakfast of all sorts of root vegetables and tofu prepared in many ways, miso soup, steamed rice, an assortment of pickles and other healthy and delicious items.

We made our way to the huge Bic Camera store, to purchase travelers’ Sim cards for our phone and iPads.

At the cash register, the lady cashier handed us a printed sign in English, saying that Sim cards are not refundable and that they offer no exchanges and no support.

This is very discouraging to tourists, but we have done this dozens of times and we knew what to do.

We affirmed that we understood, and after purchasing the Sim cards, we sat on benches in the store and proceeded to successfully register and activate our new Sim Cards.

From Osaka, we took a train to Kobe.

We decided to give ourselves a few days to acclimate to the different time zone and climate, before starting to walk the pilgrimage.

It was a good plan, because every evening we felt sleepy by 8PM and woke up full of energy to start the day, by 3AM.

Kobe is a city known for Wagyu Kobe beef.

There are many eateries around town offering Kobe beef.

We, of course, as pilgrims on a major Buddhist pilgrimage, did not try any of the beef.

But we did visit Kobe’s famous Chinatown.

We walked around the stalls offering small wraps filled with Peking duck, all sorts of Chinese dumplings, sweets and food on wooden sticks.

To be honest, all the restaurants in the middle of Chinatown looked dingy and unhygienic.

But we chose a place to eat lunch anyway, despite our instincts.

We reminded ourselves that while traveling in China, we often had some fabulous meals in places with floors full of dirt, carpeted with cigarette butts, dirty paper napkins and chicken bones strewn all over.

Well, this place had all the minuses and none of the pluses of China.

The food was pretty bad, and after eating and paying our bill, while Jules was in the toilet, I saw a rat fall from the second floor ceiling onto the middle of the restaurant’s floor.

Somehow, despite its loud landing, it was alive and it scurried away.

Two girls, who were waiting for their food order, ran out of the restaurant, explaining to the stunned waiter that they had just seen a rat fall from the ceiling.

I also grabbed our bags and ran out of the restaurant.

I explained to Jules what had happened and we both laughed nervously, hoping we would be able to digest the questionable food.

Jules was OK, maybe because he had not actually seen the rat fall from the ceiling.

I was not so well, maybe BECAUSE I did see and hear the rat’s loud landing.

I ended up vomiting my guts out in a nearby mall’s toilets.

We promised ourselves that from now on and during the whole pilgrimage, we will eat ONLY in clean and harmonious places.

It was not hard to eat in nice and cool places in Kobe, as long as we stayed away from Chinatown.

The city of Kobe is wedged between the mountains and the sea.

The mountains were hazy from the smog, and the sea is dominated by a big commercial harbor.

There are memorial parks along the harbor, commemorating the great Kobe earthquake of 1995 that nearly demolished the entire city.

The highlight of our stay in Kobe was our visit to the Hyogo Prefectural Museum of Art.

They had the opening of an exhibition of paintings by the artist Kyosai.

His art is wonderfully rendered, whimsical and very philosophical, bordering on the cynical, comical, and even morbid.

Kyosai lived an interesting life; he was drunk a lot in his youth, but later in life, he devoted much of his time to his spiritual search..

He changed the first character of his name from 狂meaning “wild” or “crazy” to 暁meaning “daybreak dawn” or “enlightenment.”

The last series of paintings that he did, in the final year of his life, was a series of daily sketch drawings of the Goddess Kannon.

I was very moved by his artwork, and decided that since we will be walking the Chūgoku Kannon Pilgrimage, I will also make a quick ink drawing daily of Kannon, the Goddess of unconditional love and compassion.

Wishing you a great day/night,

← Follow Your Fears
The Castle Town of Himeji, Japan →

2 Comments on “The Chūgoku 33 Kannon Pilgrimage, Japan – Arriving in Kobe, a Rat Falls from the Ceiling, and the Art of Kyosai”