Hiking the Lycian Way, Turkey – Day 1 – Arriving in Fethiye, The Amintaş Rock Tombs and the Village of Kayaköy 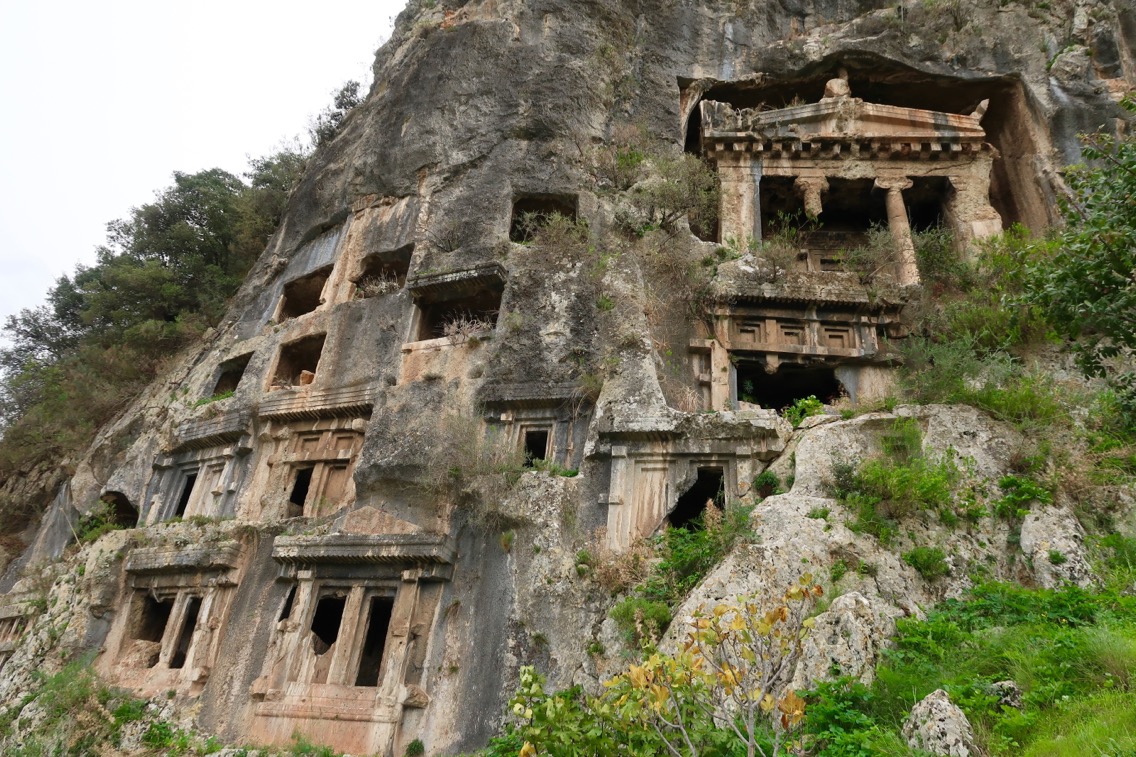 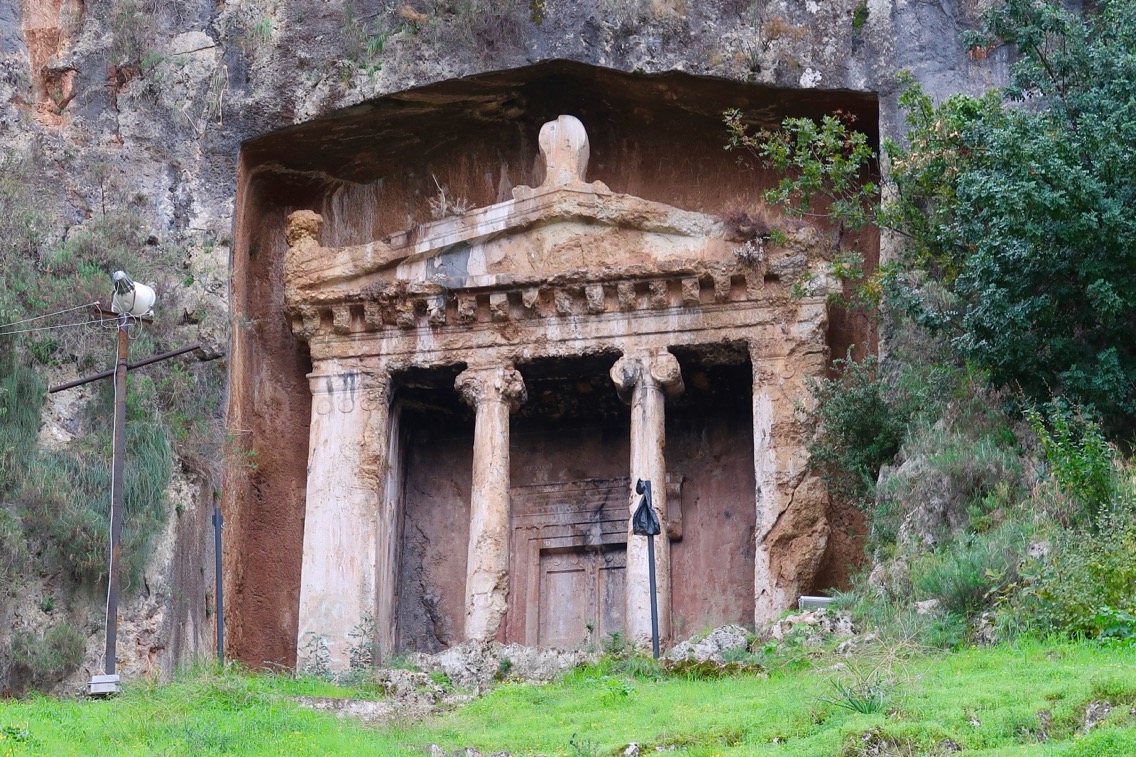 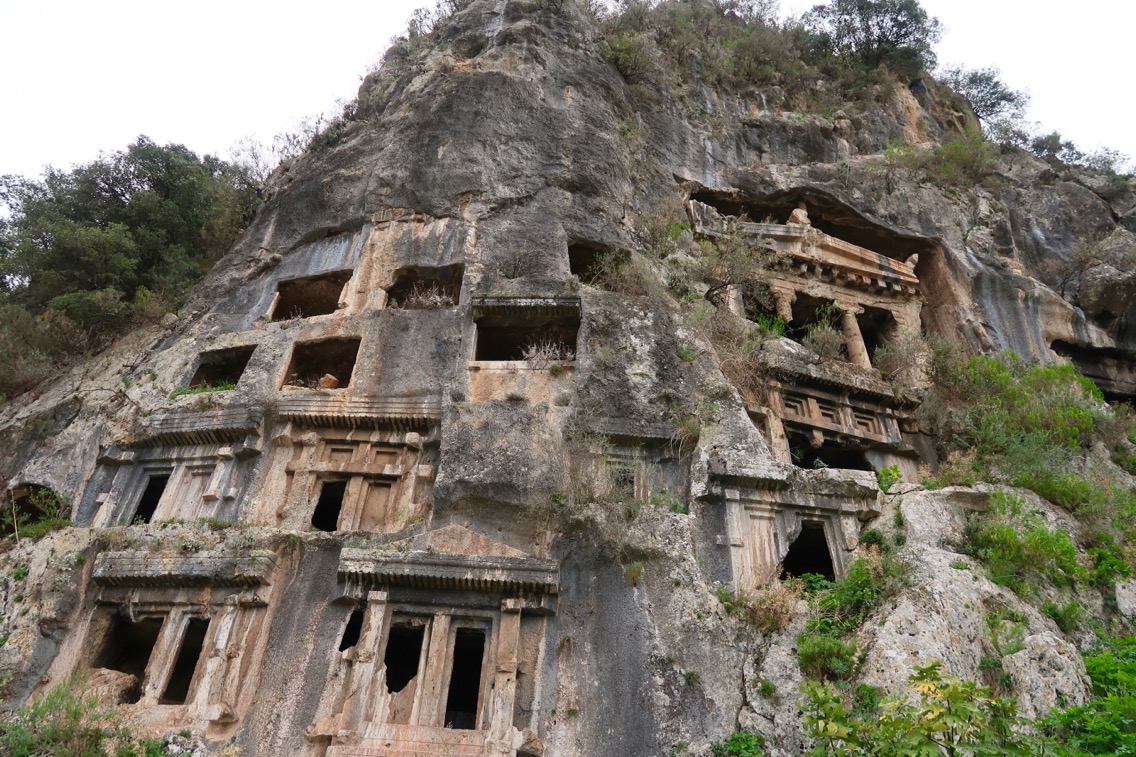 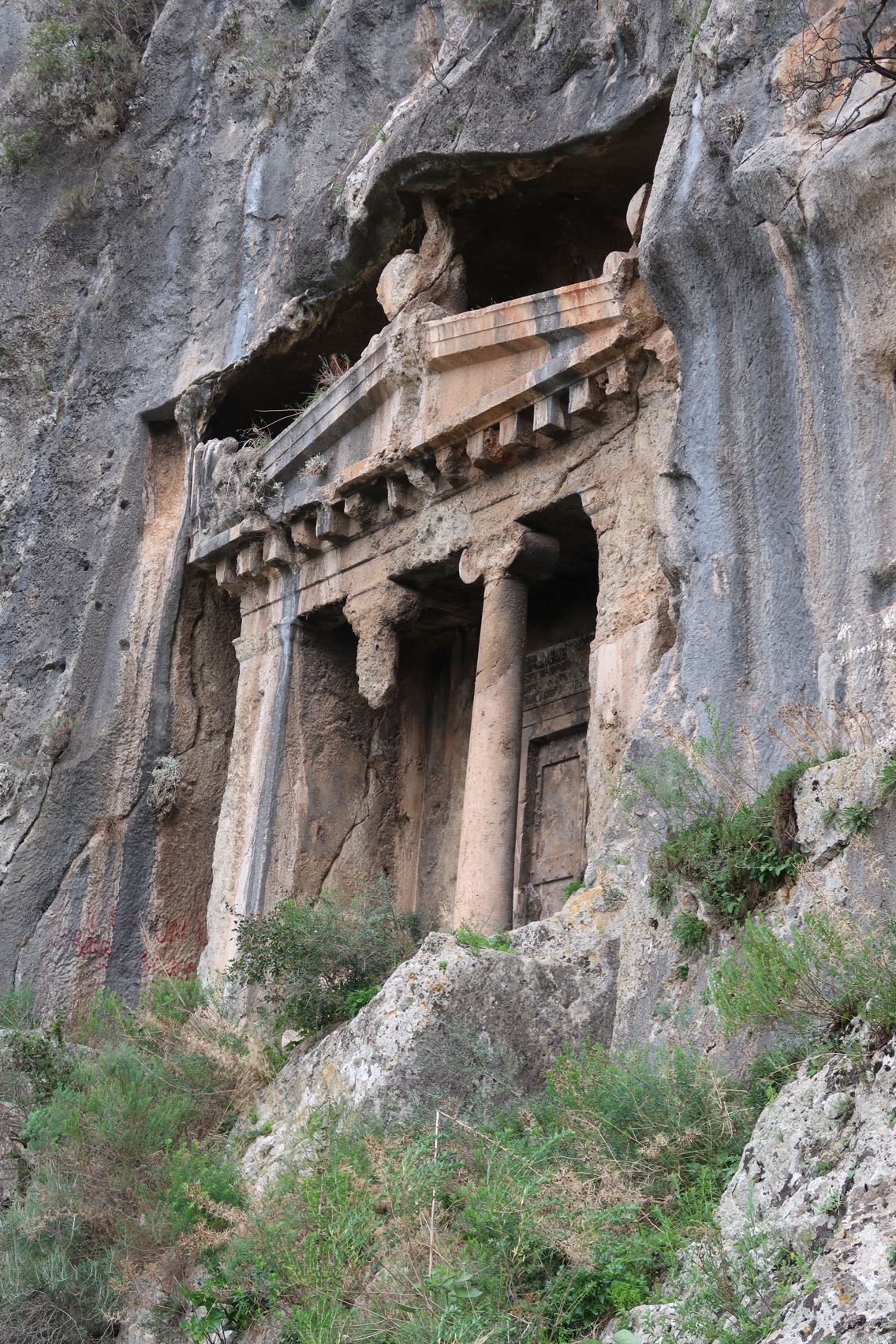 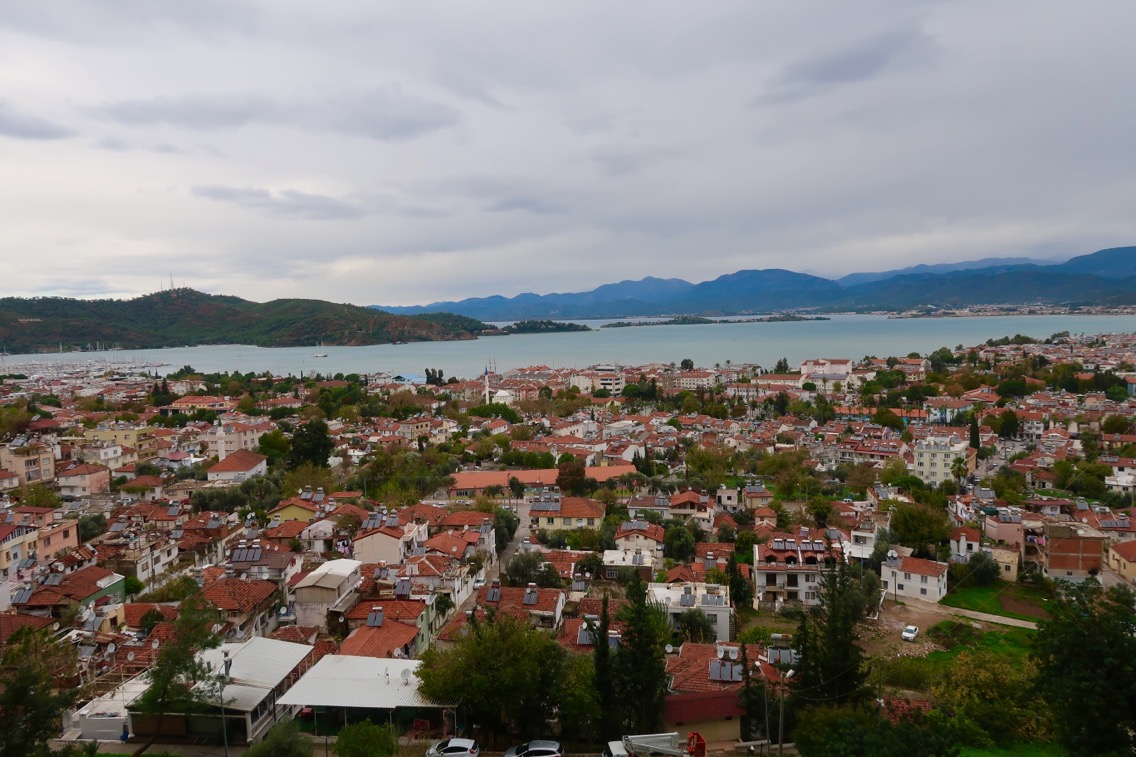 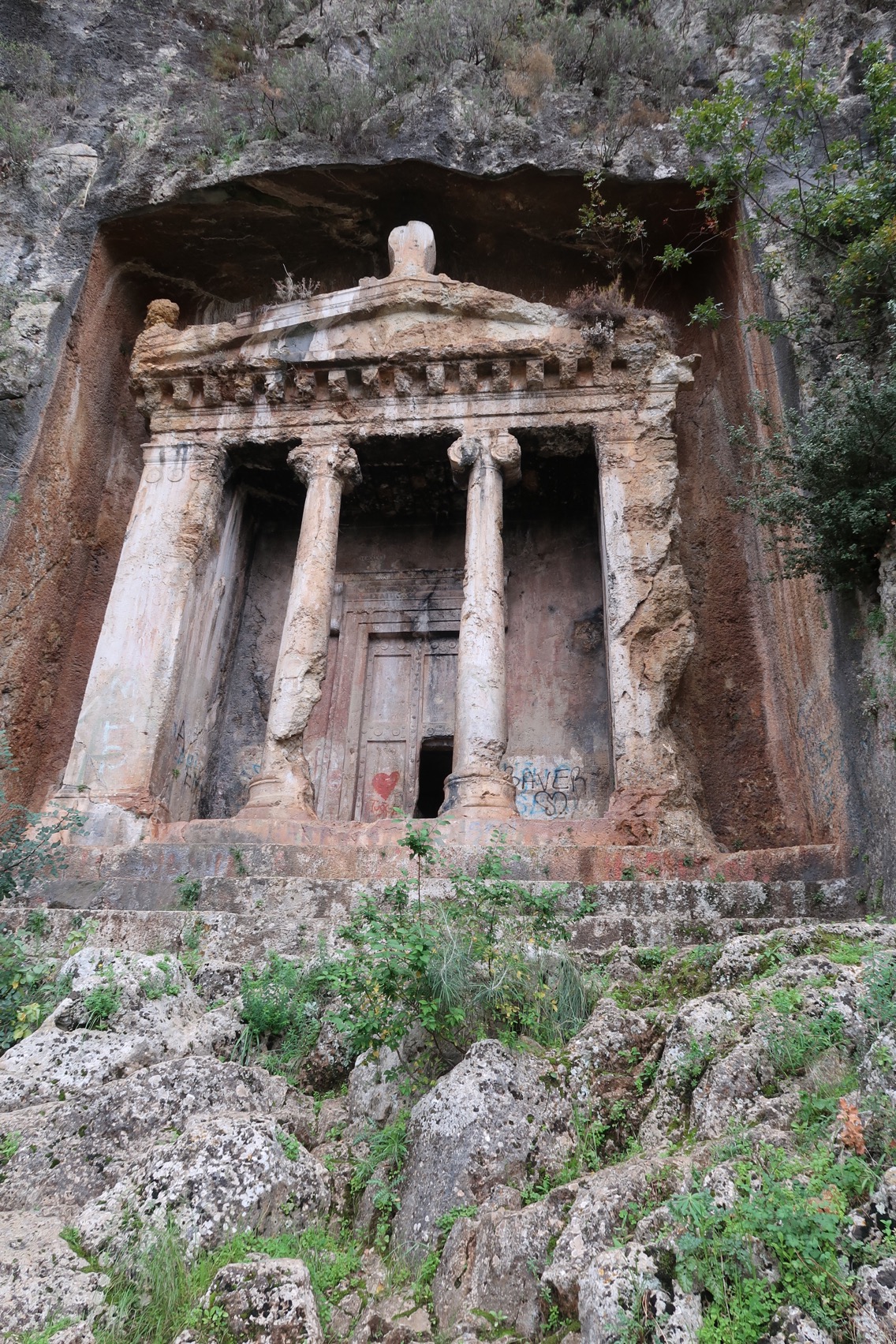 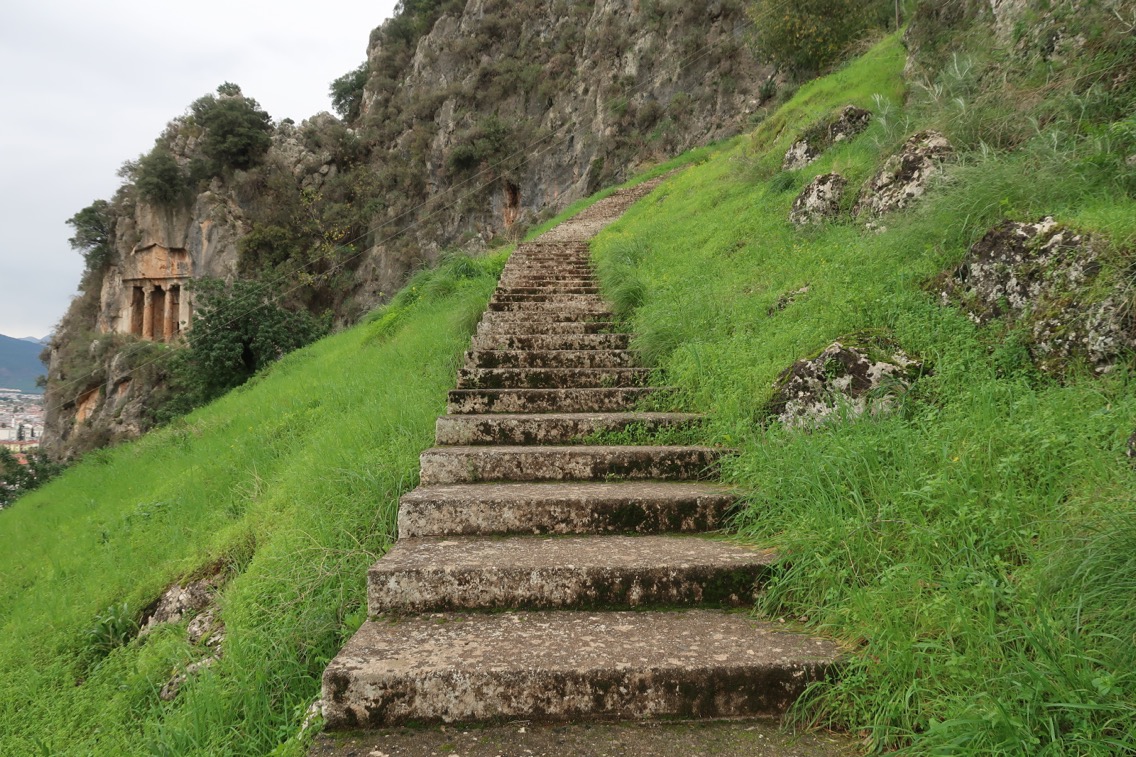 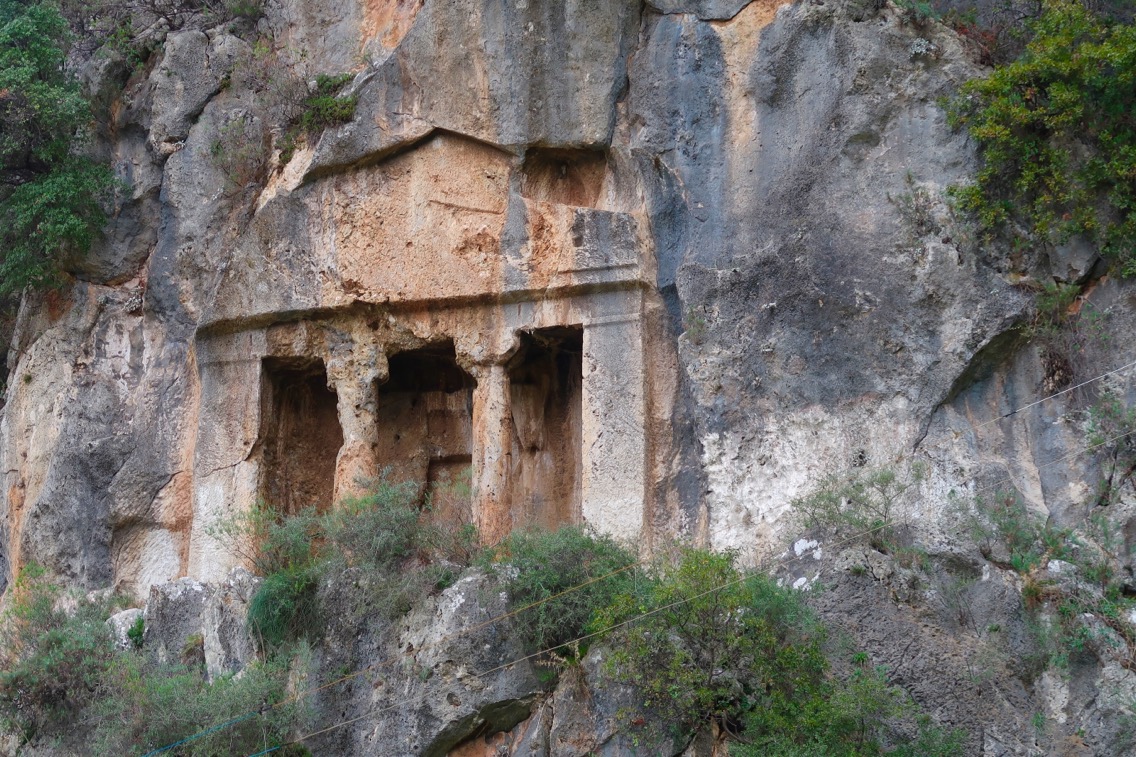 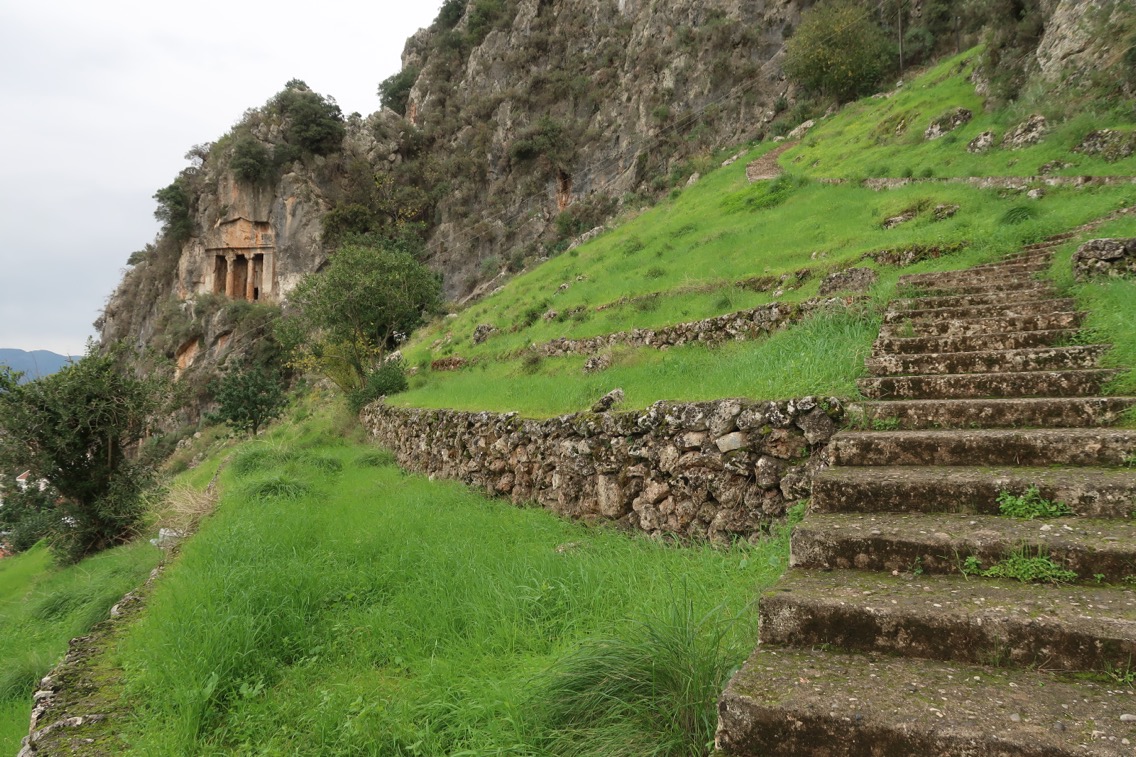 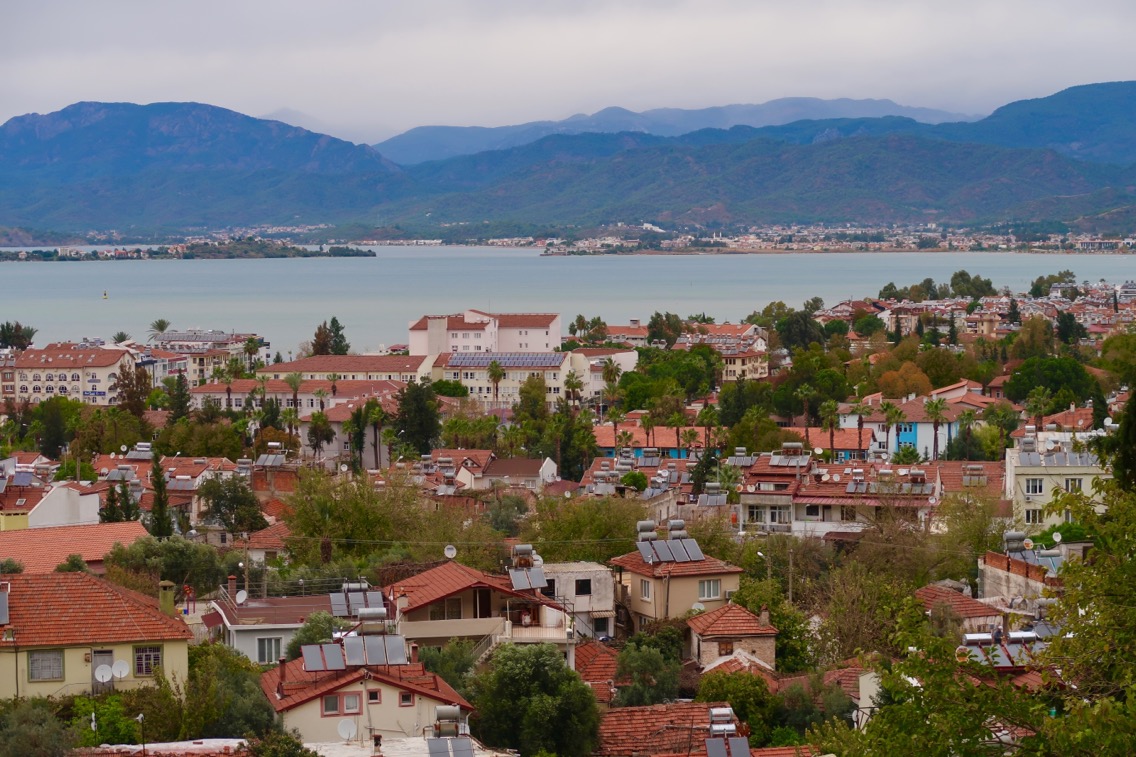 Hiking the Lycian Way, Turkey – Day 1 – Arriving in Fethiye, The Amintaş Rock Tombs and the Village of Kayaköy

Let me start by saying that if you are planning to hike the whole 550 Kilometers of the Lycian Way, these posts will not be of much help to you.
We are only hiking for ten days, as a first “taste” of the hike and to get a feeling for this mountainous, rugged Mediterranean coastline in southern Turkey.

It was not a hike we planned ahead.
We came to Turkey with no plans and no reservations.
While sitting in a cafe in Istanbul, we loosely made an itinerary which included the highlights of Turkey.

We planned to visit the stunning rock caves of Cappadocia for a week, and to visit the hot springs of Pamukkale, with its pink mineral pools landscape.
We also planned to fly to Mount Nemrut, the Mountain of the Gods, and to go south from there to see some ancient biblical sights like Sanliurfa (Urfa), where local tradition says that Abraham (from the Bible) was born in a cave.

We also planned to visit the Black Sea region with its cliffside monastery and remote alpine villages, to visit the saffron fields and the tea plantations of the north, and to visit Troy, with its wooden Trojan horse and some major historical ruins.
We also thought of seeing Konya, where the Sufi Poet Rumi lived.

But life has it own dynamic, and six weeks is definitely not enough time to see this ancient Ottoman Empire.
So we have decided to come to Turkey again in the future, and to see the rest when we return to walk the Phrygian Way.

We looked at our Turkey wish list and decided to cut it down.
The cliffside monastery in the Black Sea is still closed for major reconstruction.
Estimates say it will reopen sometime in 2019.
So that was out for now.

It is December now, and it is too cold to travel to the Alpine region of Turkey and enjoy the northernmost area of the Black Sea.
Many places would already be closed down for the winter.

The area south of Mount Nemrut borders Syria, which is still in the midst of a terrible internal war.
The terrorist organization ISIS is said to have people who might be hiding at the border.
So that is something we can delay as well.

The city of Konya is not the same city in which Rumi lived.
It is now a modern, busy metropolitan area.
They have cut down the ancient trees, and the Sufi school is now a museum.

Then I thought about the Lycian Way.
I have read about people who have walked it before.
It is about 550 Kilometers, and it takes about thirty days to walk.

But in the past, all who walked it had to camp.
Some stayed in guesthouses wherever they were available, but you could not do the walk without camping.

Jules and I do not like camping.
We like to finish a day of hiking with a hot shower and a clean bed, protected from the cold, the rain, the bugs and the winds.

But…….Nowadays, traveling in Turkey is much easier.
You can go anywhere and arrange for everything very easily.

It is possible to walk about twenty kilometers every day, and stay in lovely small pensions and guesthouses.
This way, you can experience this historic region and enjoy the beautiful scenery, eat the local food and swim in the blue Mediterranean sea.

The way to do it is to either take a taxi or a Dolmus bus, or to arrange for your transport at the end of each day to take you to your accommodation.

A Dolmus bus is like a shared minivan and they are very reasonably priced.
To take a taxi for twenty kilometers, costs very little.
But you have to make those arrangements every morning, when you leave your guesthouse.

We found a local outfit that does all that for you.
They offer a self-guided walk of the Lycian Way, that books your accommodations, arranges for all the transfers and provide maps and all the info you need.
All this for a very reasonable fee.

It was just perfect for us.
We already had our hiking gear from walking the Via Francigena, so we flew on an early morning flight from Kayseri airport in Cappadocia, to Dalaman airport.
We were picked up and taken to the ancient seaside town of Fethiye.

In Fethiye, we visited the ancient Lycian tombs, carved into the rock walls across from the sea.
It is amazing that these tombs are still standing.
They date back to the 4th century BC, but they are still here.

The gates look like an entrance to an ancient temple, but they are actually an ornate facade to the tombs.

The Lycians were an ancient culture who lived in this area.
They were warriors and were known to have very high standards of living .
They built stone houses with very high ceilings, and ornate stone carvings somewhat similar to the Greeks.

The Lycians had their own spoken and written language, all still unknown and undeciphered today.
They were mentioned in recorded history as early as 1250 BC, as a known culture, but nobody knows when they originated.

The Lycians were conquered many times before their culture disintegrated.
They were ruled by the Ptolomeians (in 309 BC), who were then based in Egypt.

They were then ruled by the Greeks, and their language was converted to Greek.
Then they were ruled by the Romans, and later, after the split of the Roman Empire, they became part of the Byzantine Empire.
The region was subject to Arab raids, which impoverished the coastline and drove people inland, and later the region fell into Turk hands.

The Lycians believed that their dead were carried to the afterlife by magic winged creatures.
This is why they placed their honored dead in geographically high places like this cliffside in Fethiye, facing the blue sea.

Centuries of weathering and a bit of graffiti have marred these ancient tombs, but they still look very impressive.
The older tombs are small square cells dug into the rock.

Despite the external grandeur, the interior of the tombs are only chambers, cut into the rock, otherwise empty from hundreds of years’ worth of grave looting.

Form there, we drove up into the mountains to the small village of Kayaköy.
We are staying in a small guesthouse with only four rooms, all of them except ours empty.
We are the only guests at this time of the year.

The woman who owns the place, is not here, but we were welcomed in by the cook.
She made us a fabulous vegetarian dinner, including a vegetable soup, a large garden salad with some pomegranate sauce, a plate of mezze with some stuffed grape leaves, roasted eggplant in yogurt, some red rice with a stewed eggplant and green beans.
Everything was delicious.

After our room warmed up enough, we waited for the hot water heater to heat up.
We took hot showers and went to bed, very excited and a little scared….
The Lycian Way traverses a rugged terrain.
It is NOT a walk in the park…. it is a major rock climbing path….
Can we do it?
Mmmmm…. sure we can!

Can we do it in the rain? When it is slippery and muddy?…..
Mmmmmmm……
We shall see….

From the small village of Kayaköy, sending you lots of love,
Tali

← Walking through a Beautiful Canyon, the village of Ortahisar and Kızılçukur Valley, Cappadocia, Turkey
Hiking the Lycian Way, Turkey – Day 2 – Kayaköy to Ölüdeniz →