Day 8 – Walking the Via Francigena- From Auchy-au-Bois to Gosnay, France 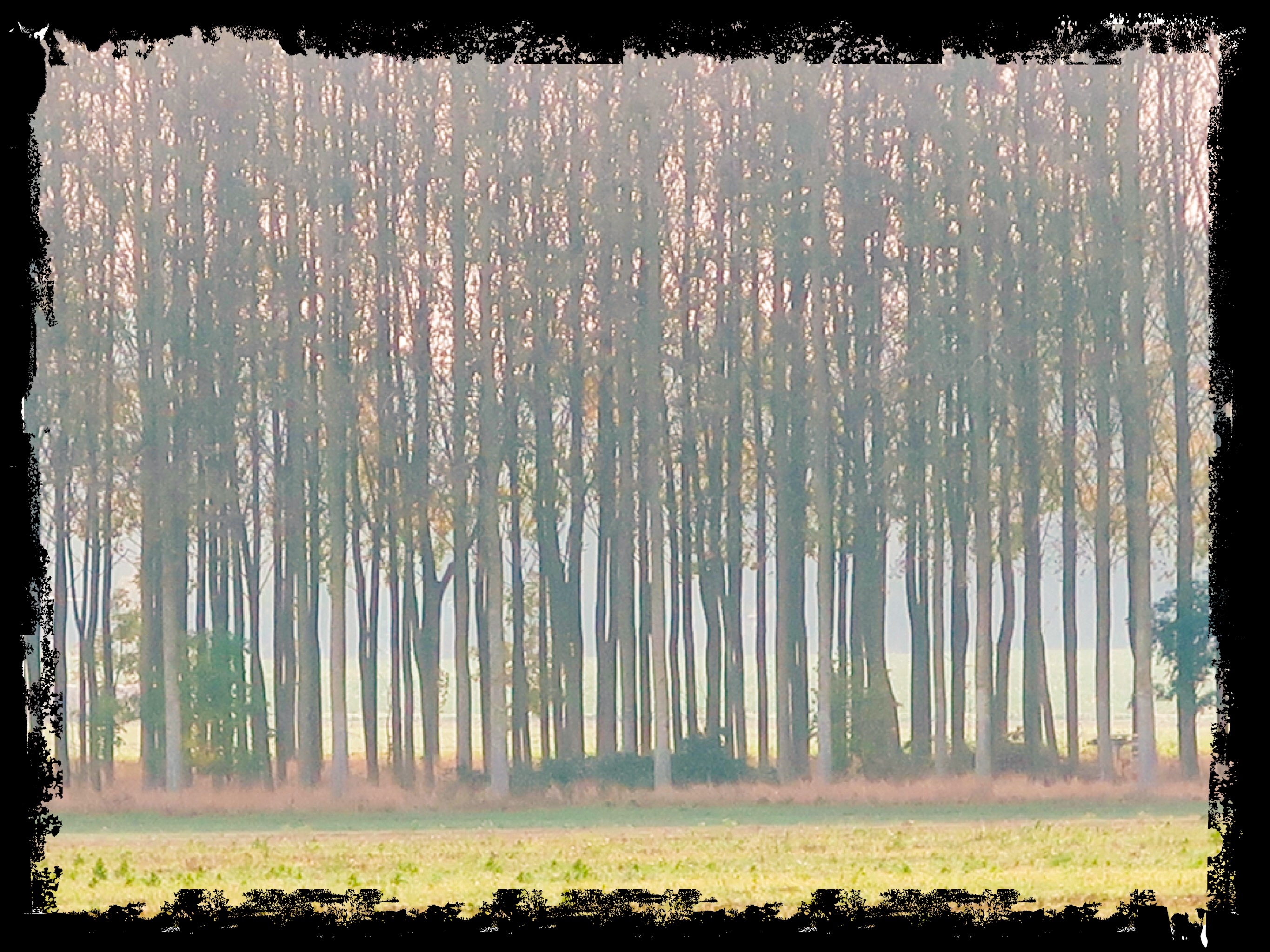 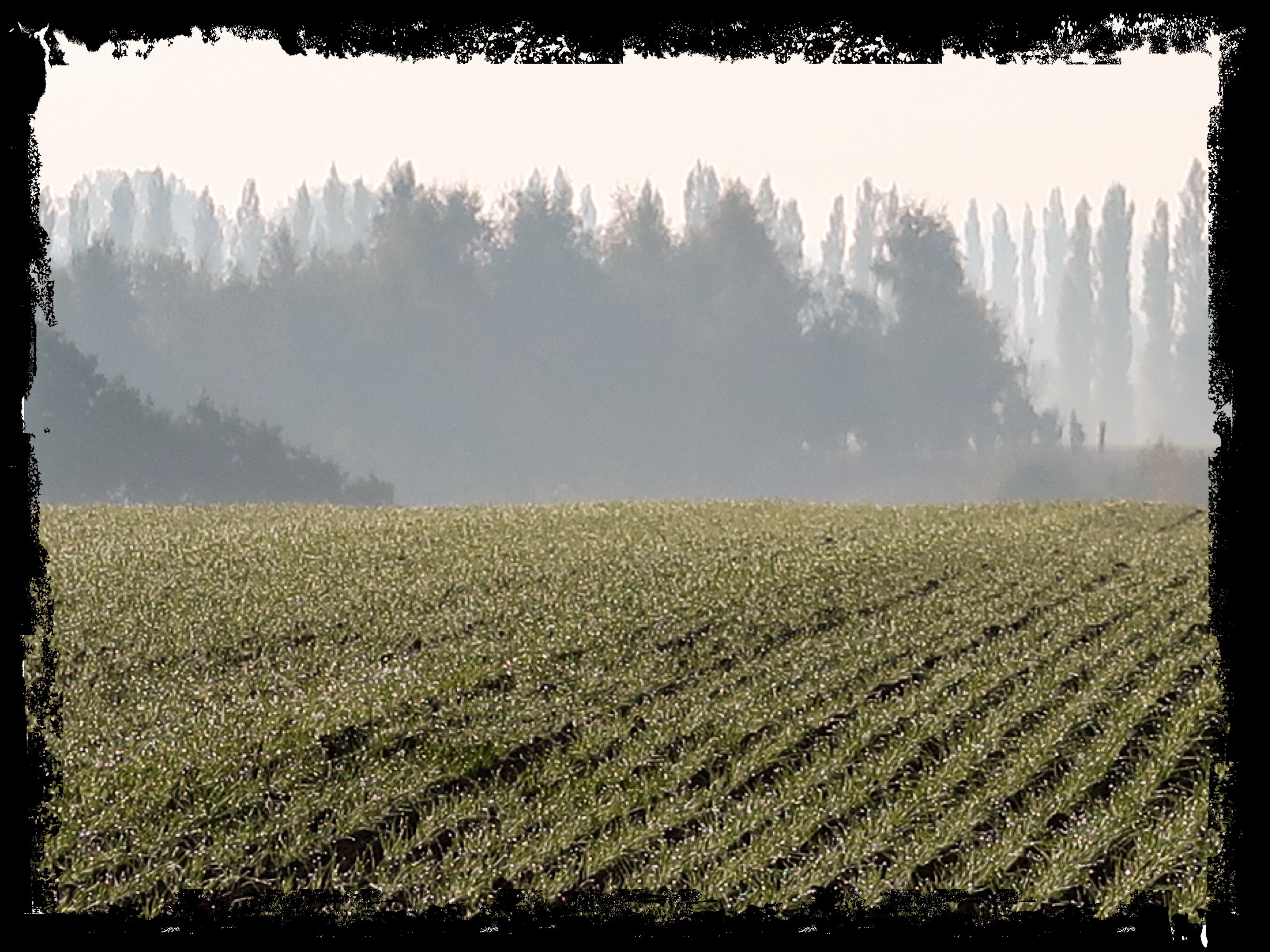 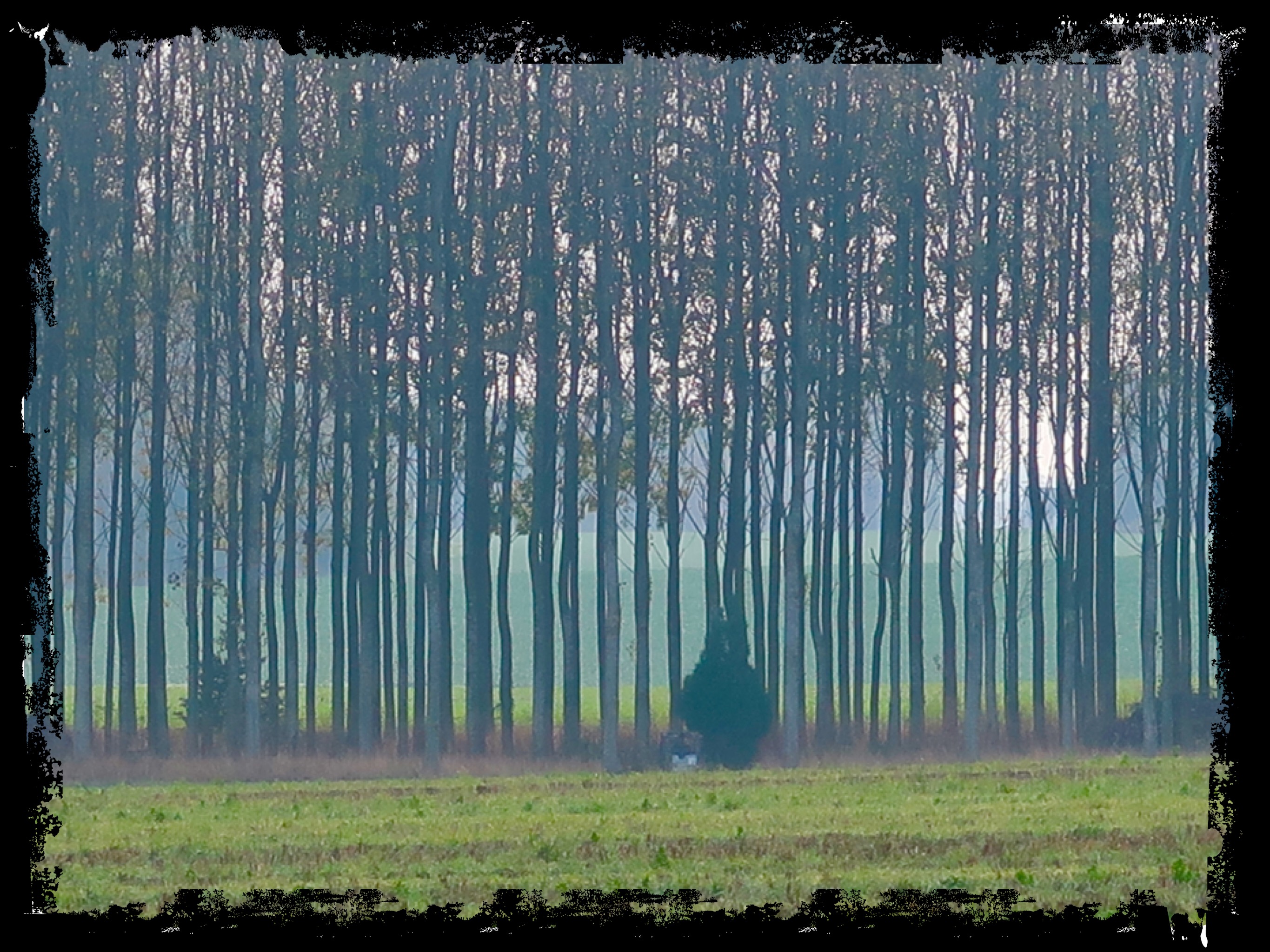 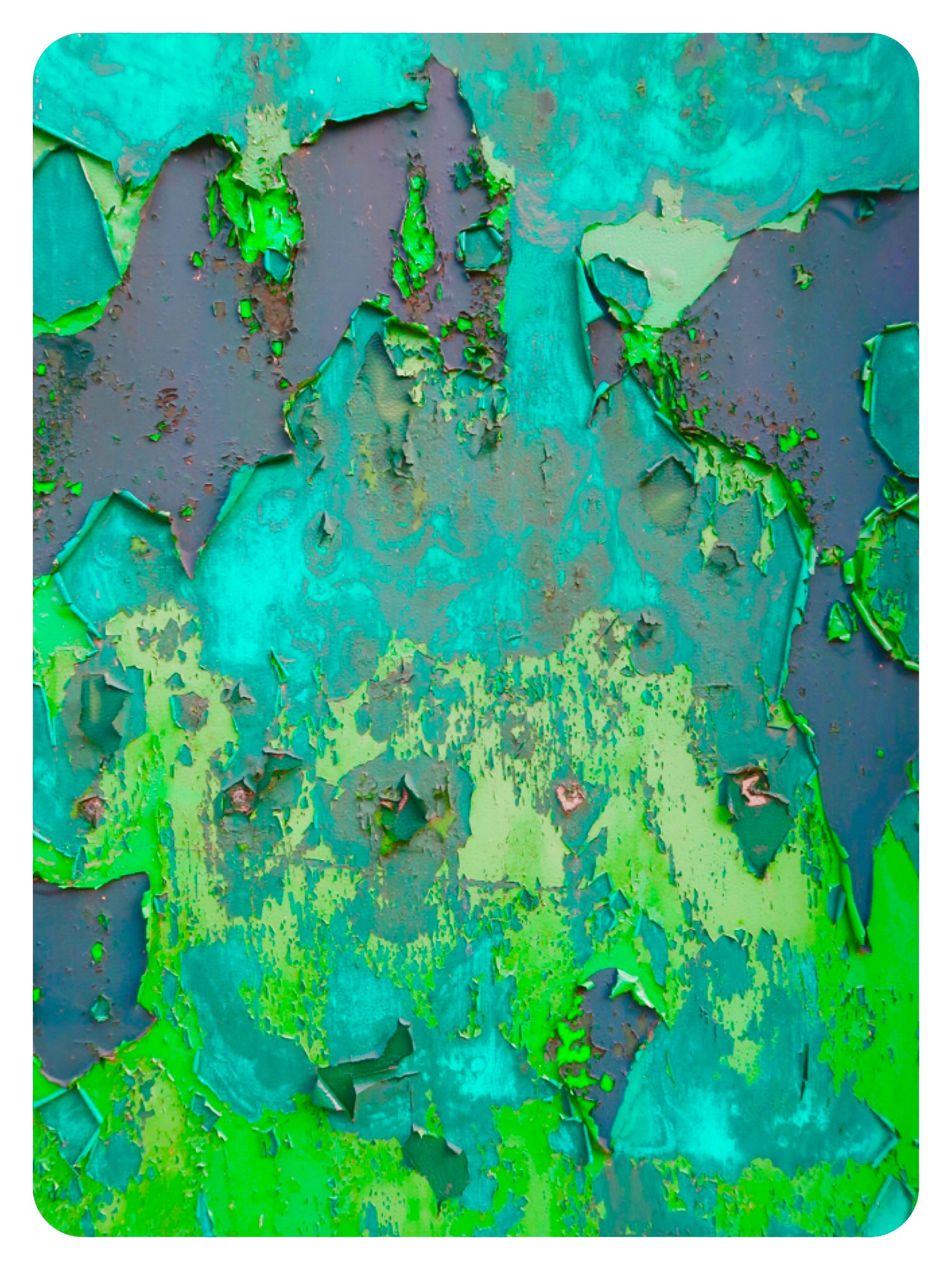 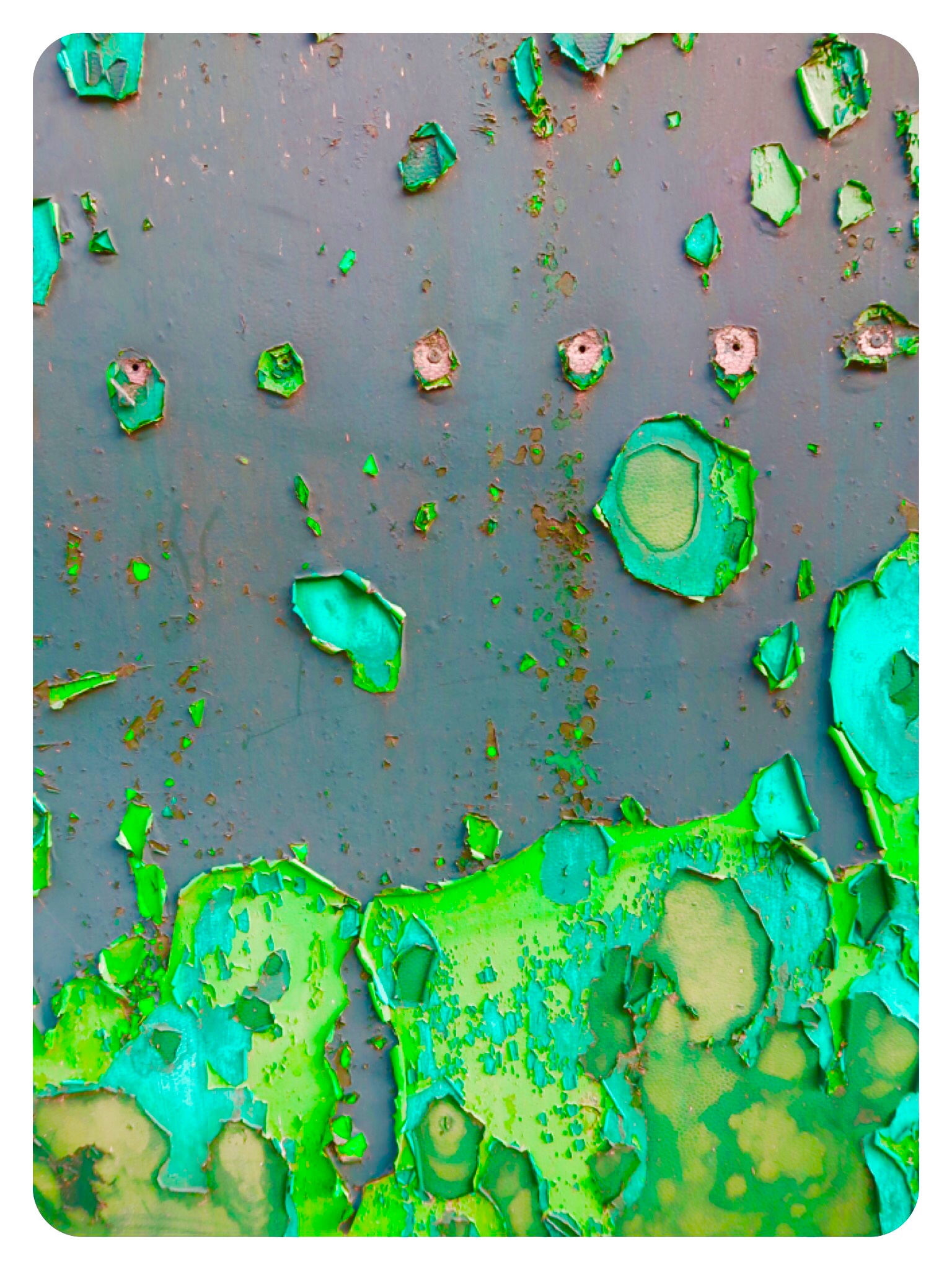 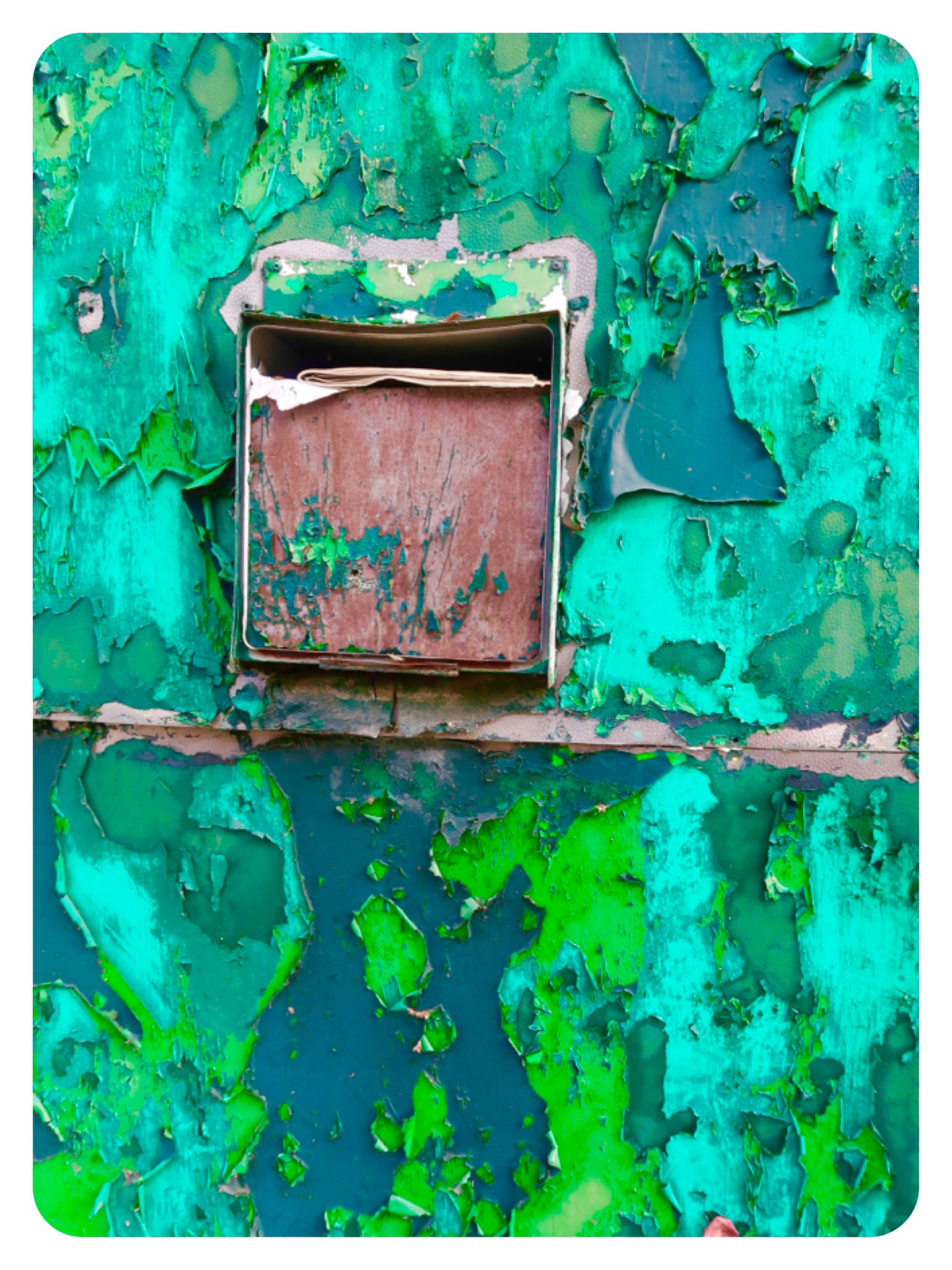 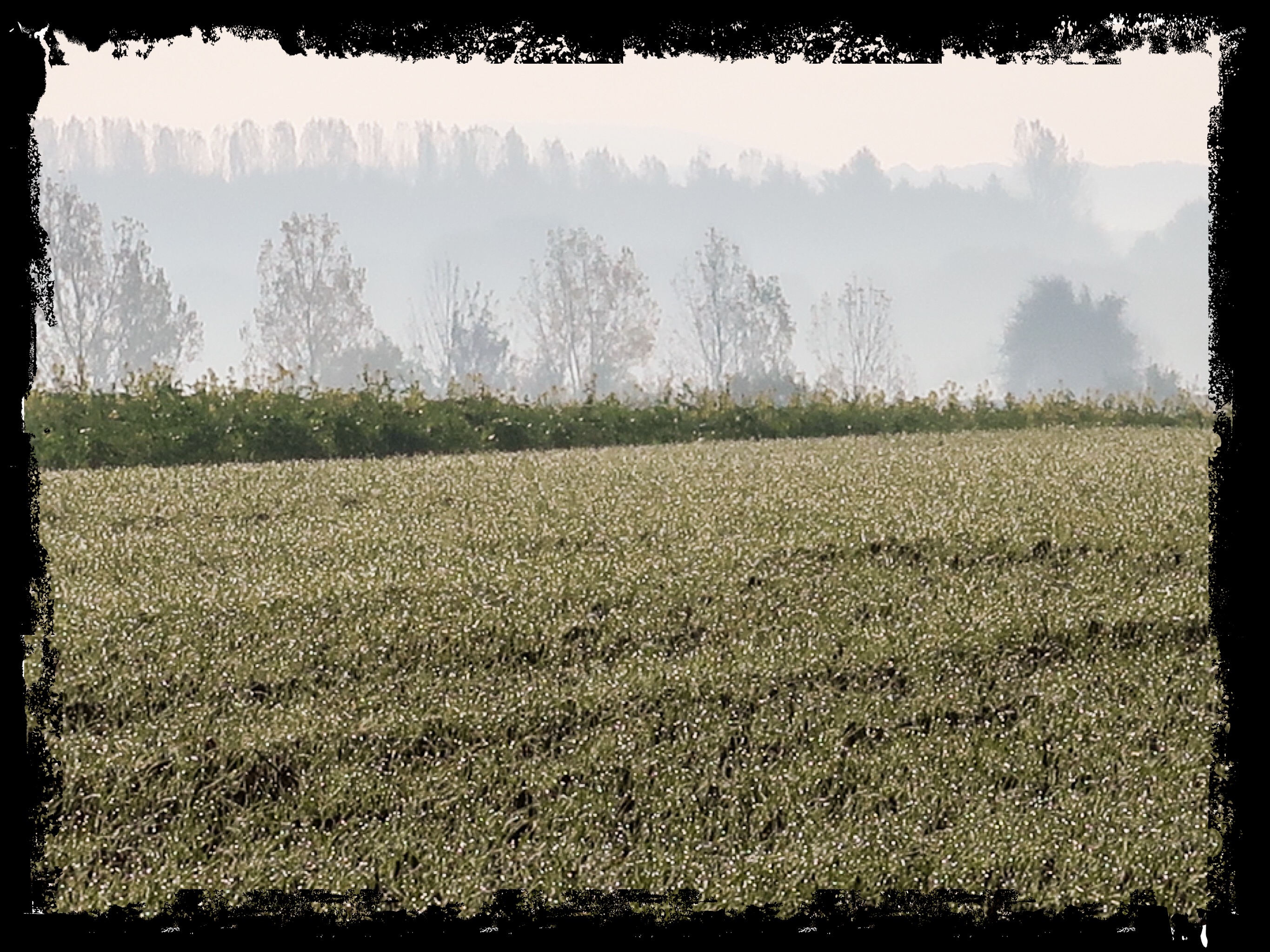 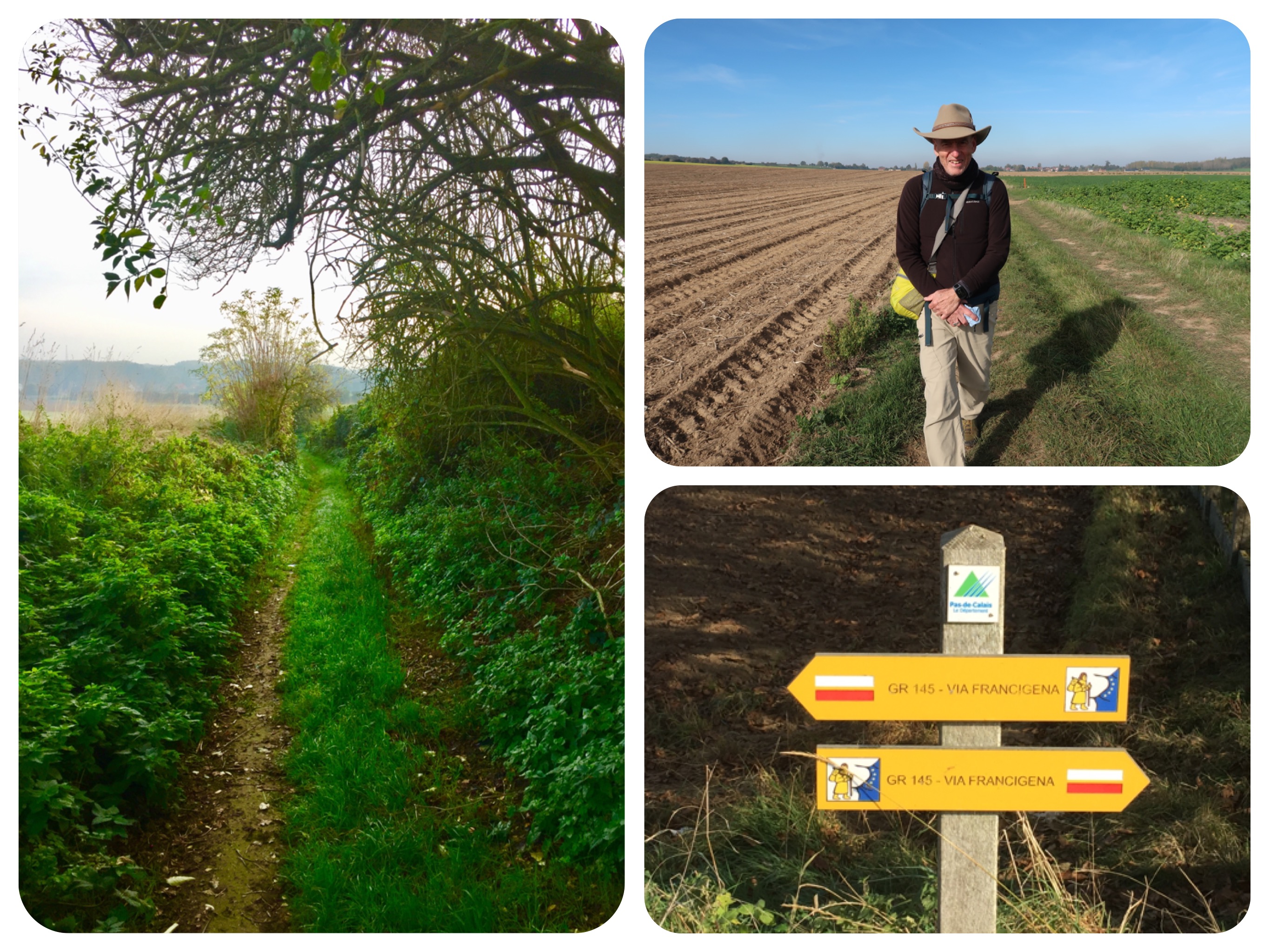 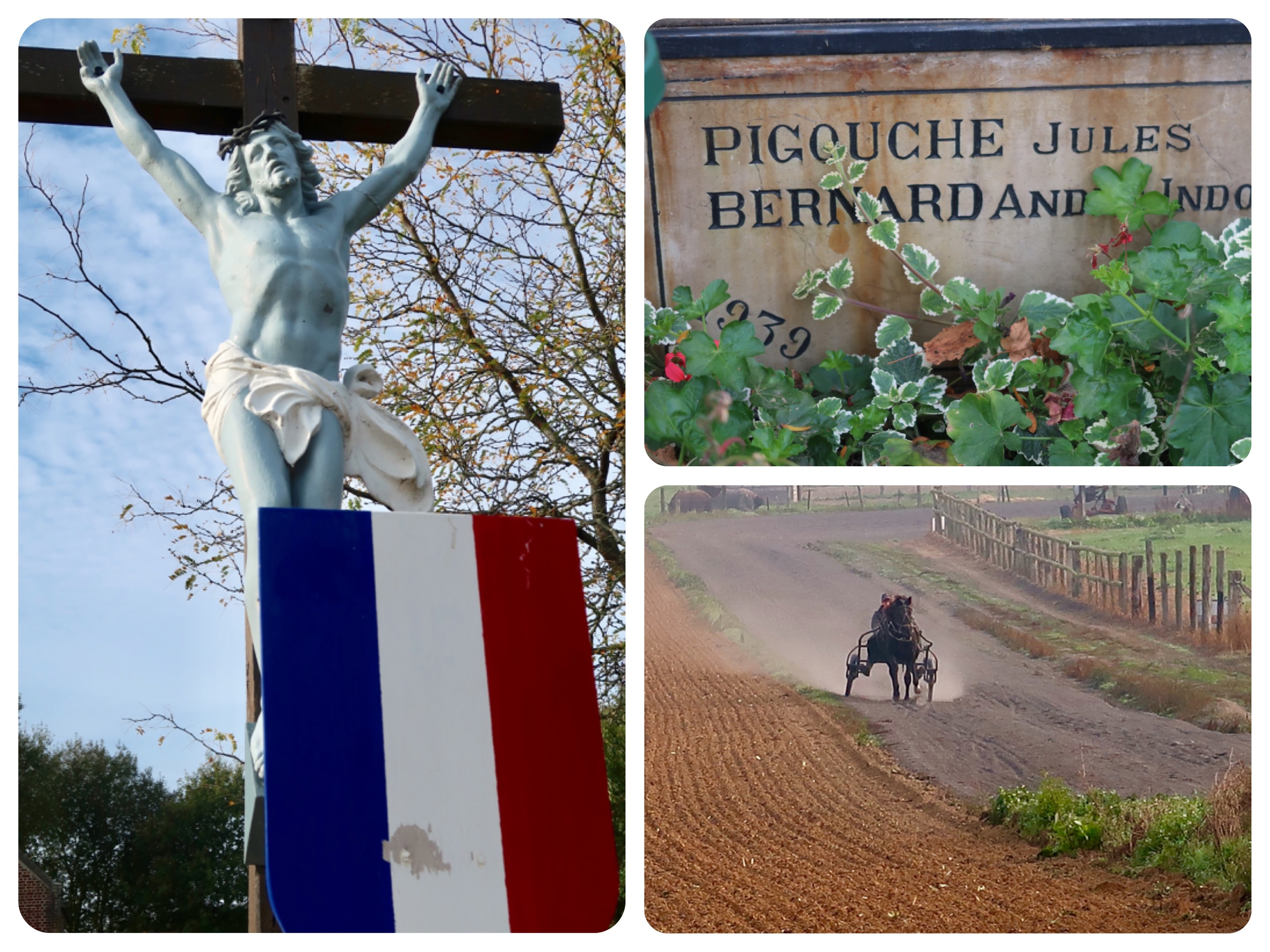 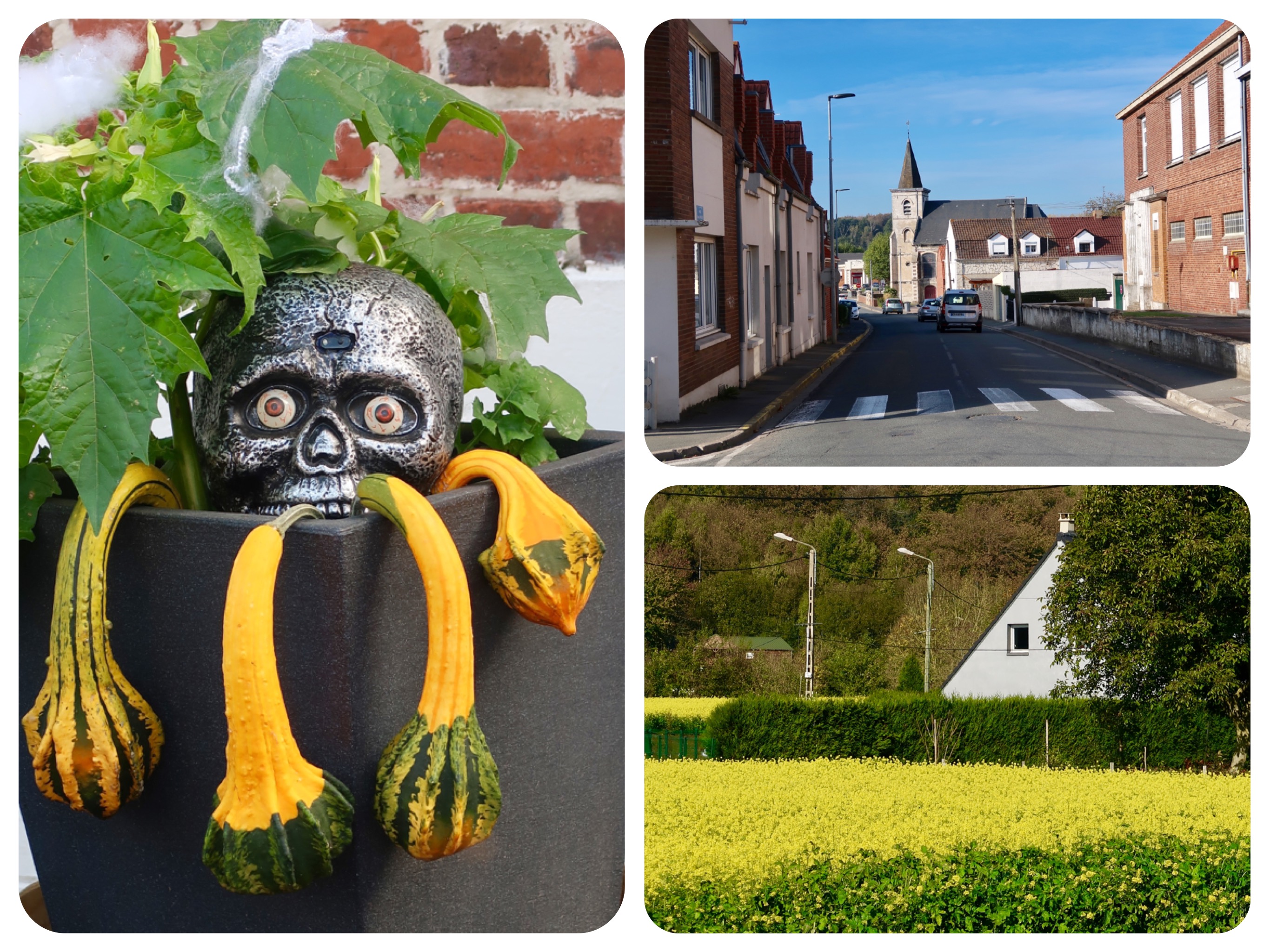 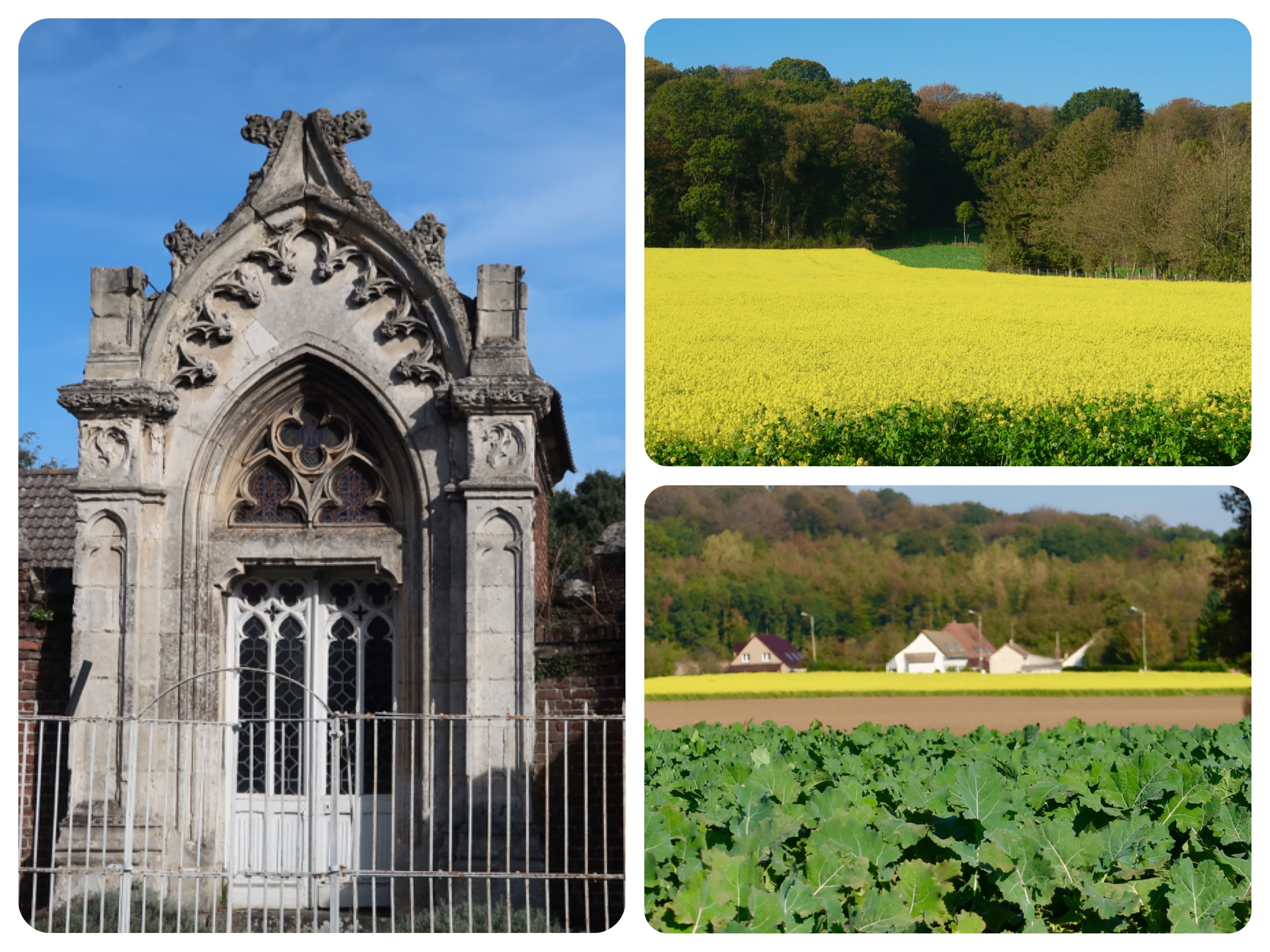 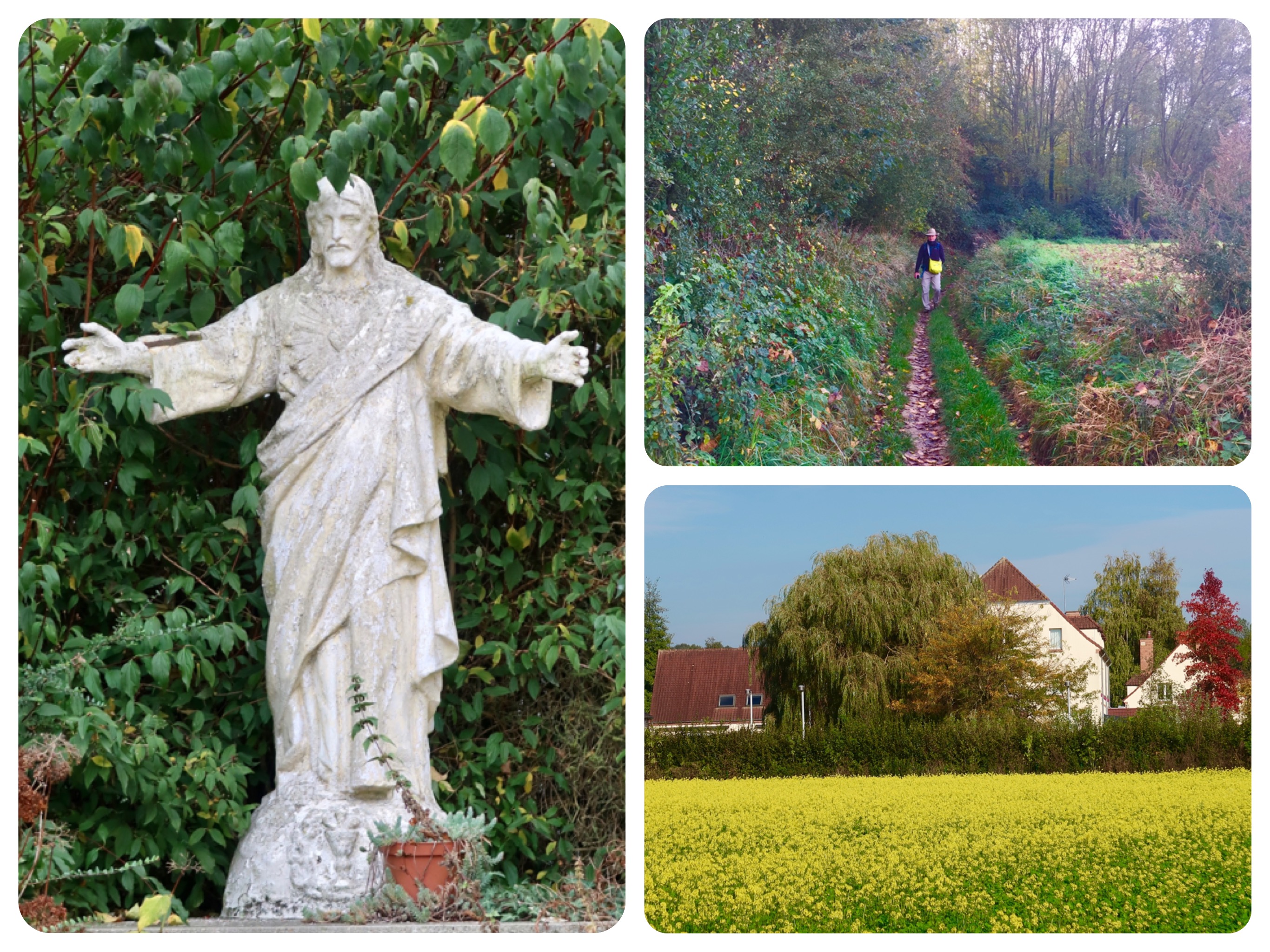 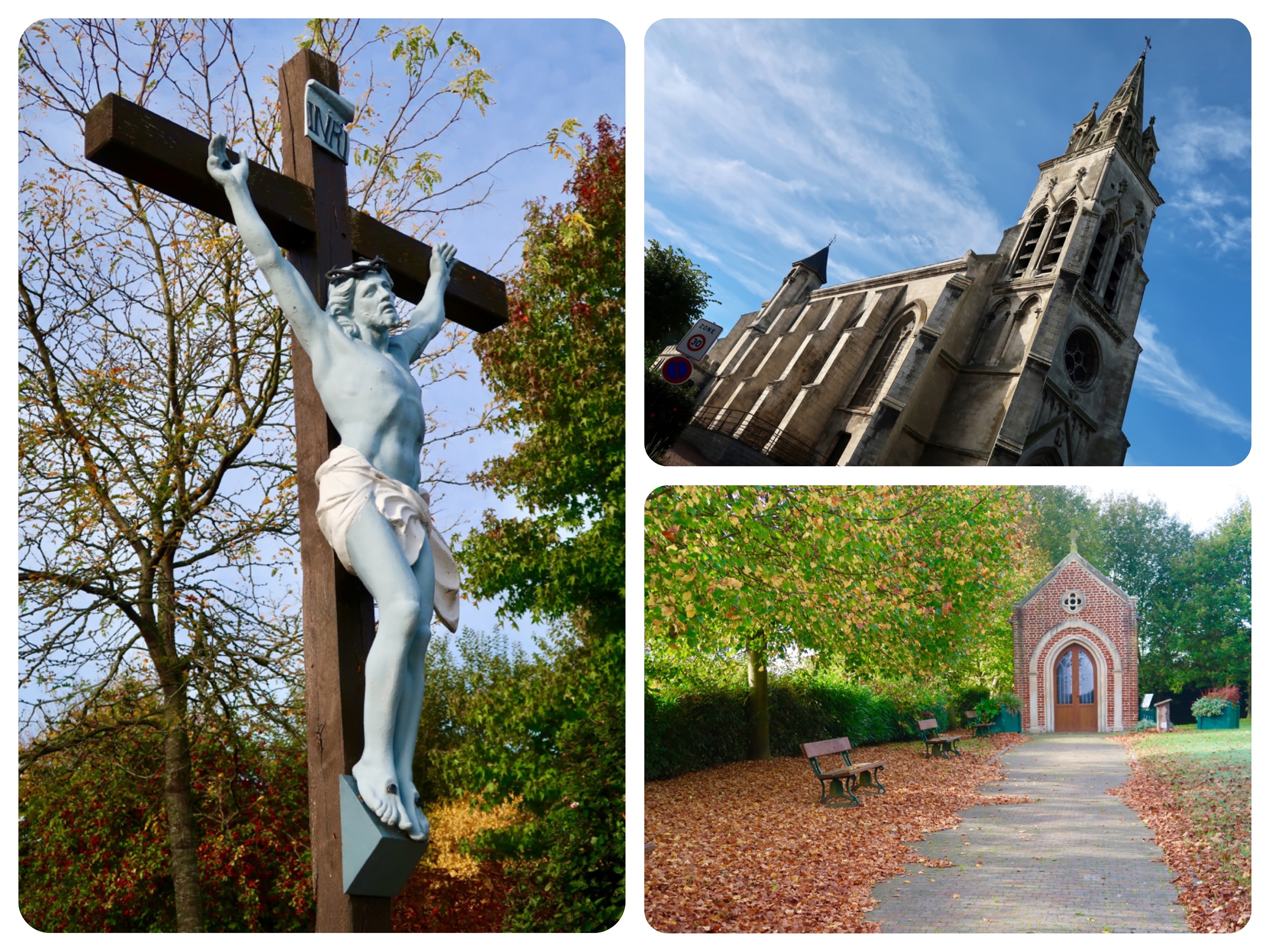 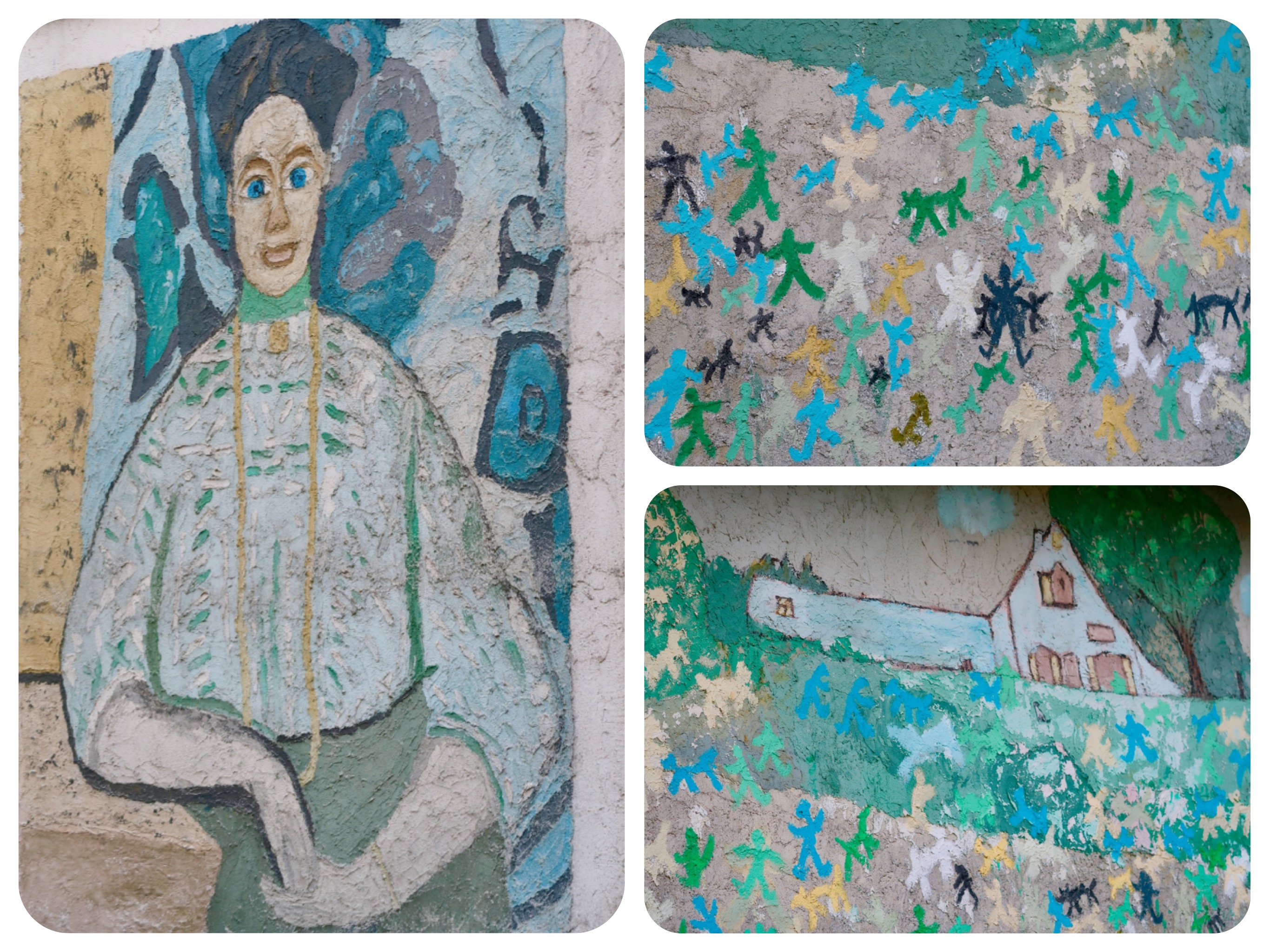 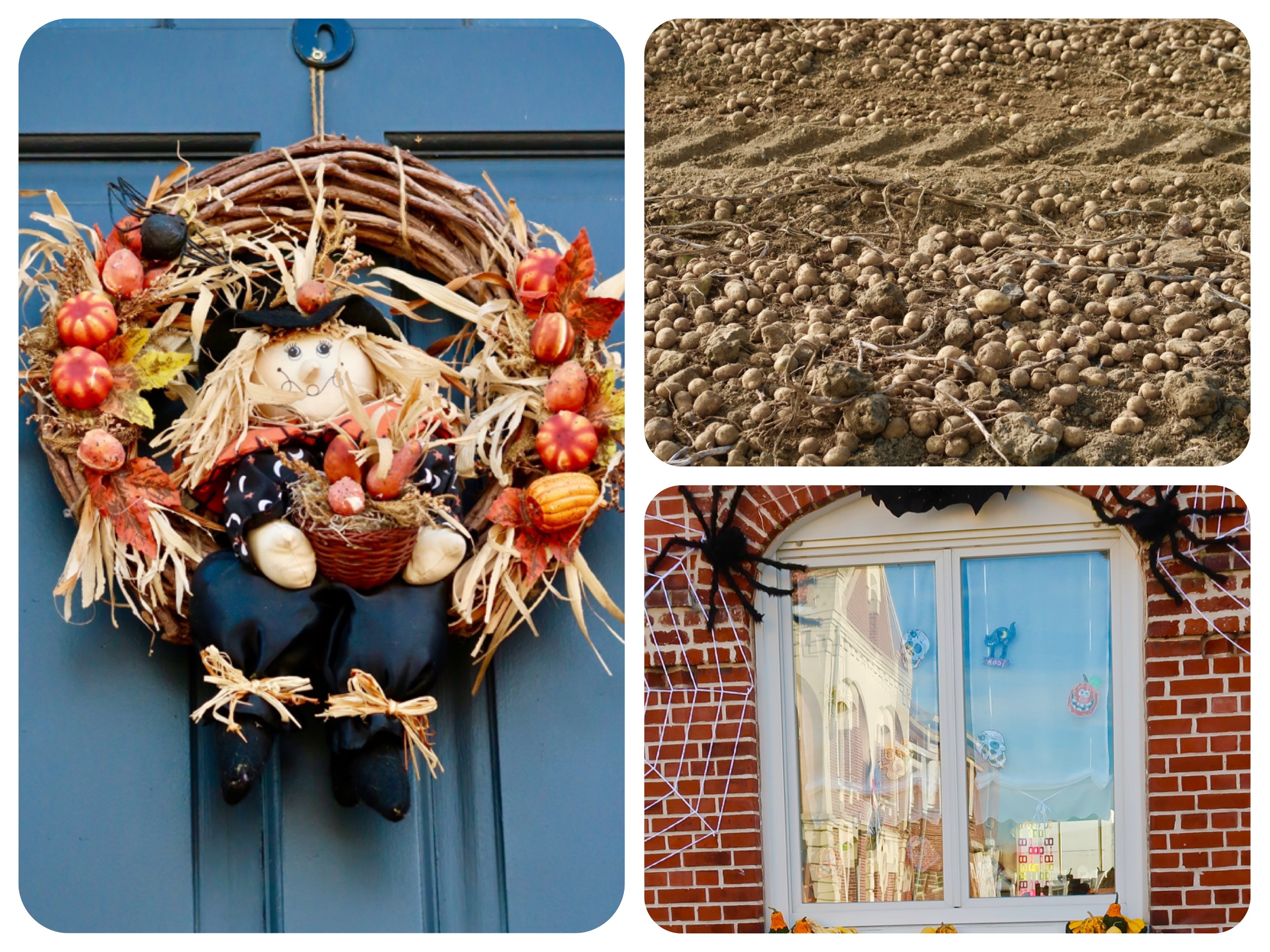 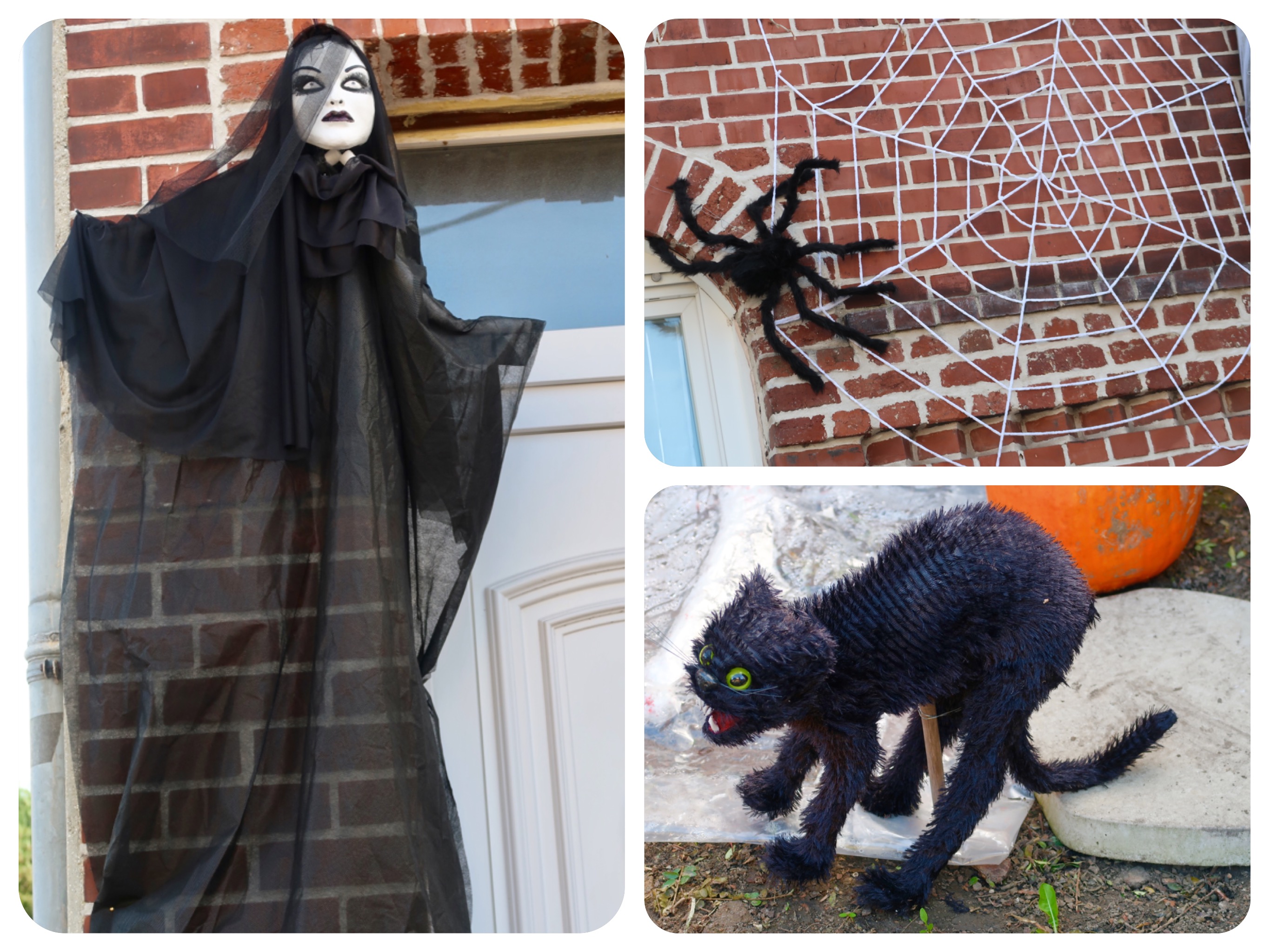 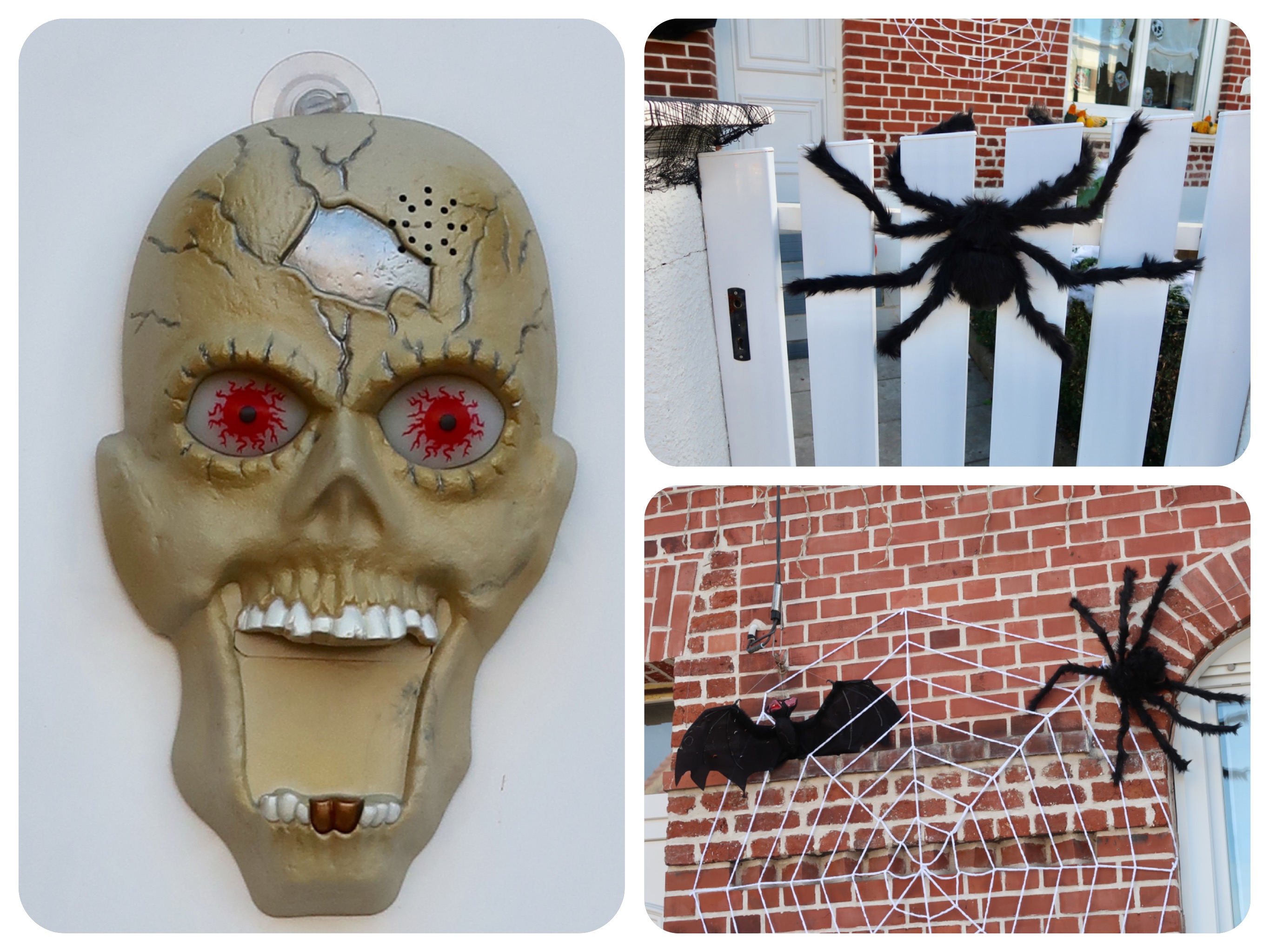 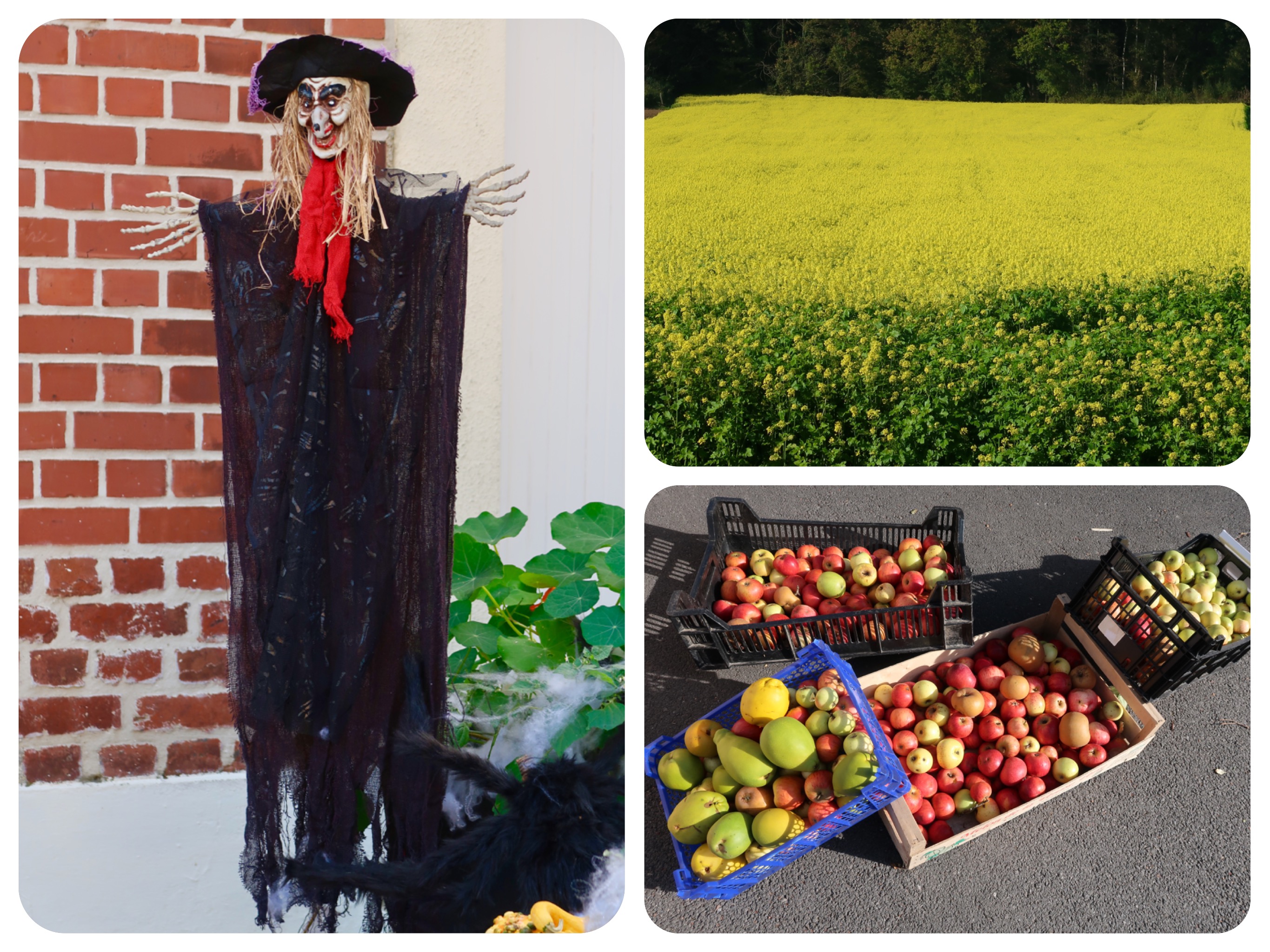 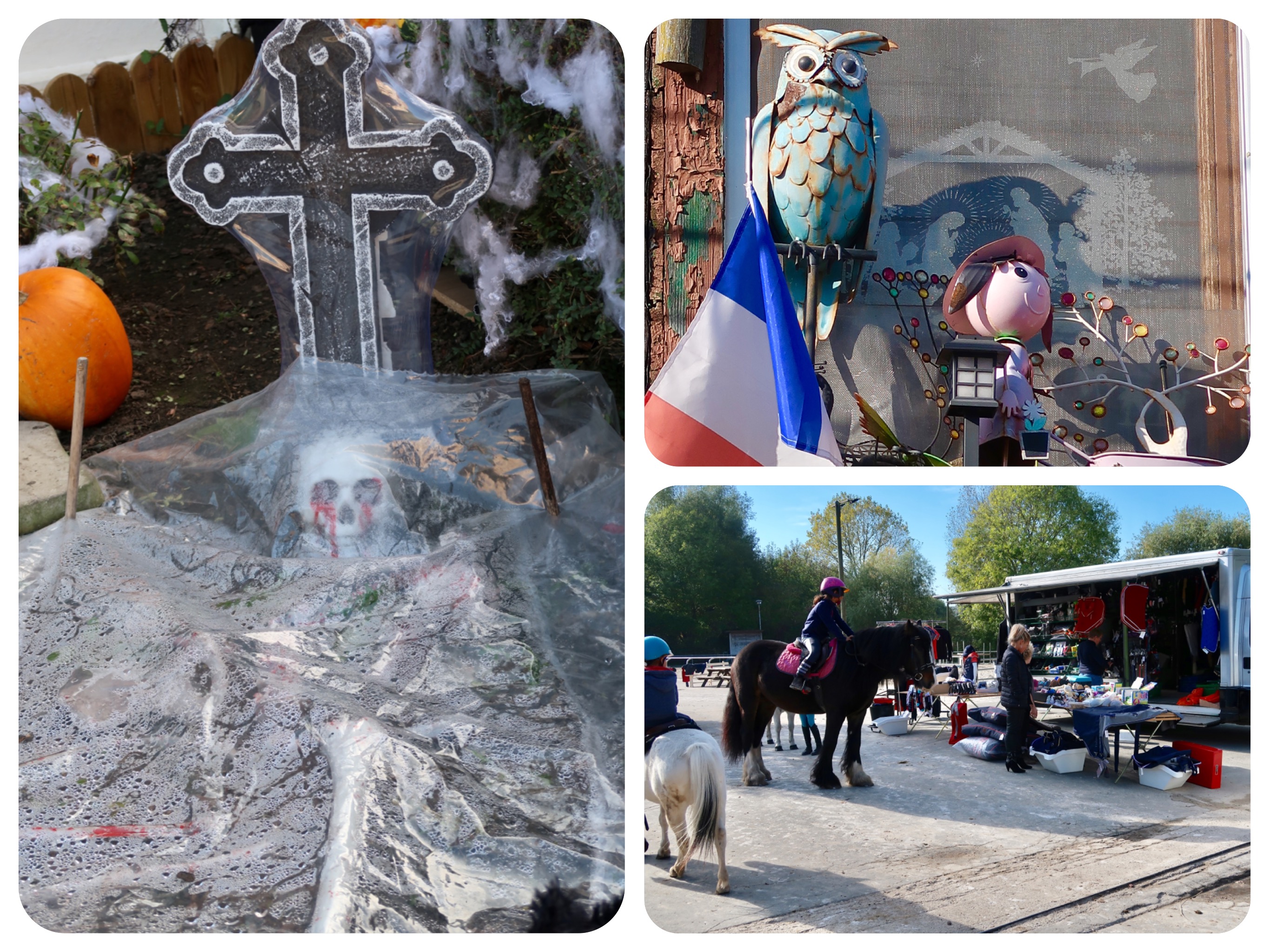 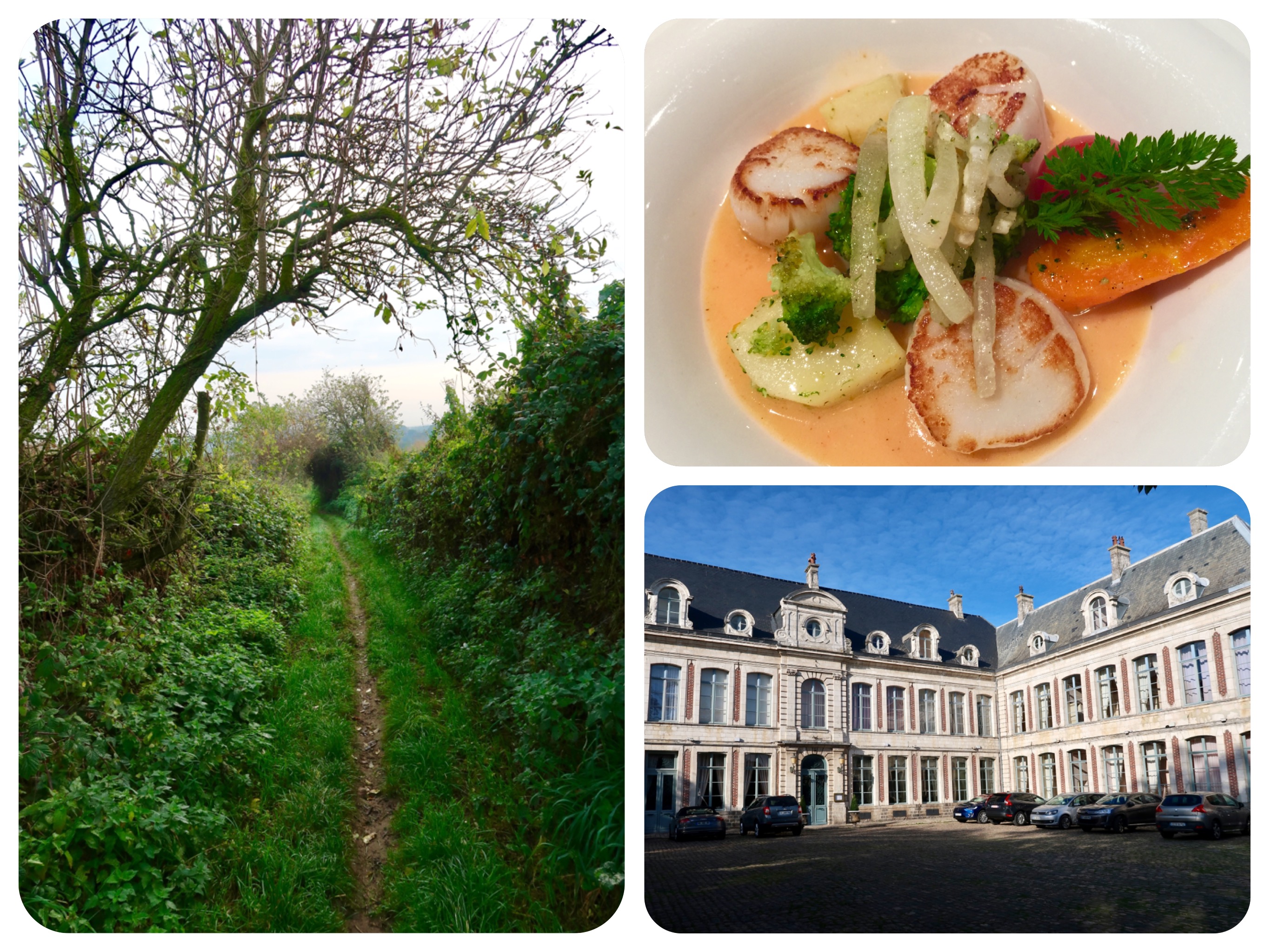 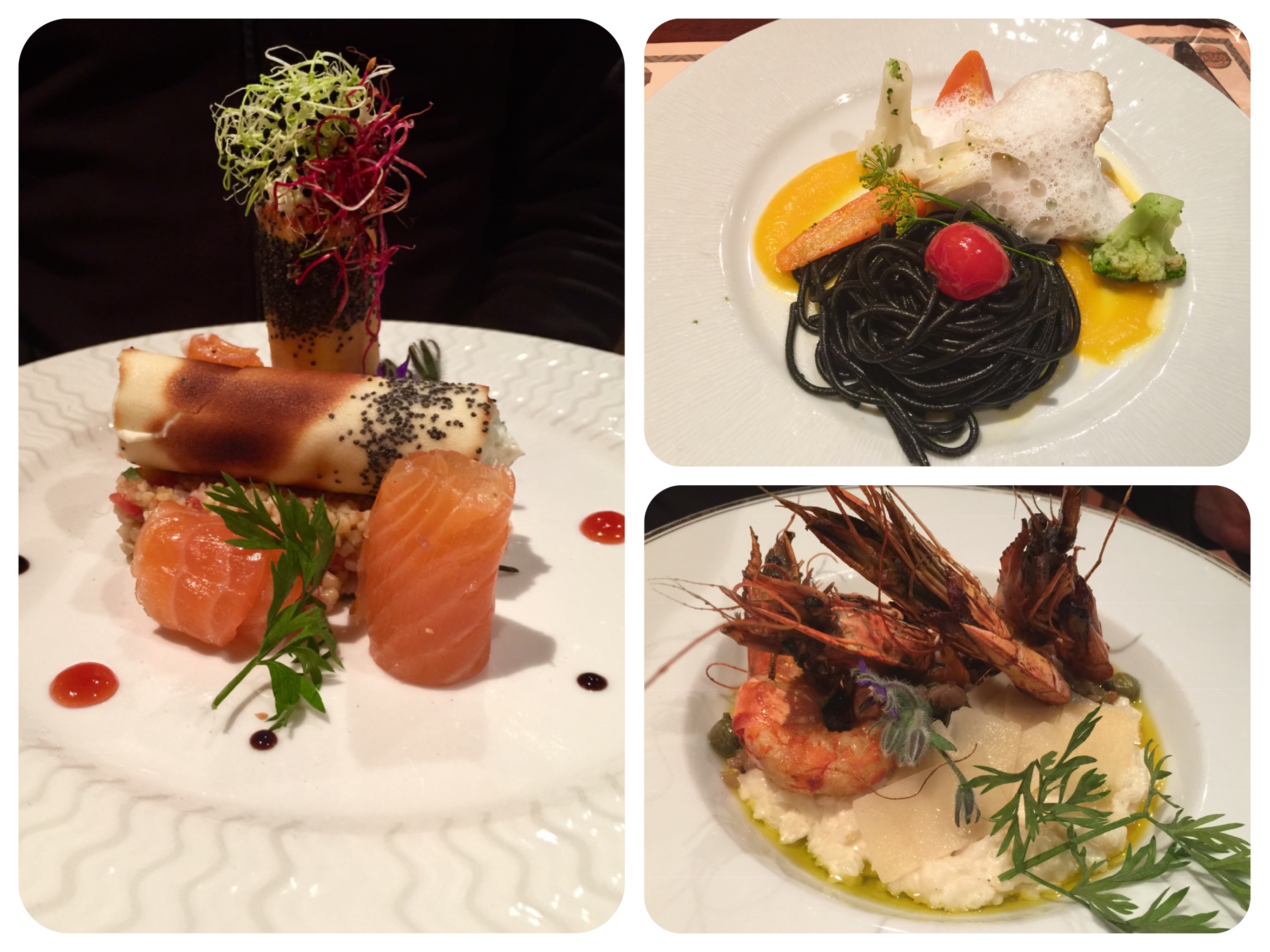 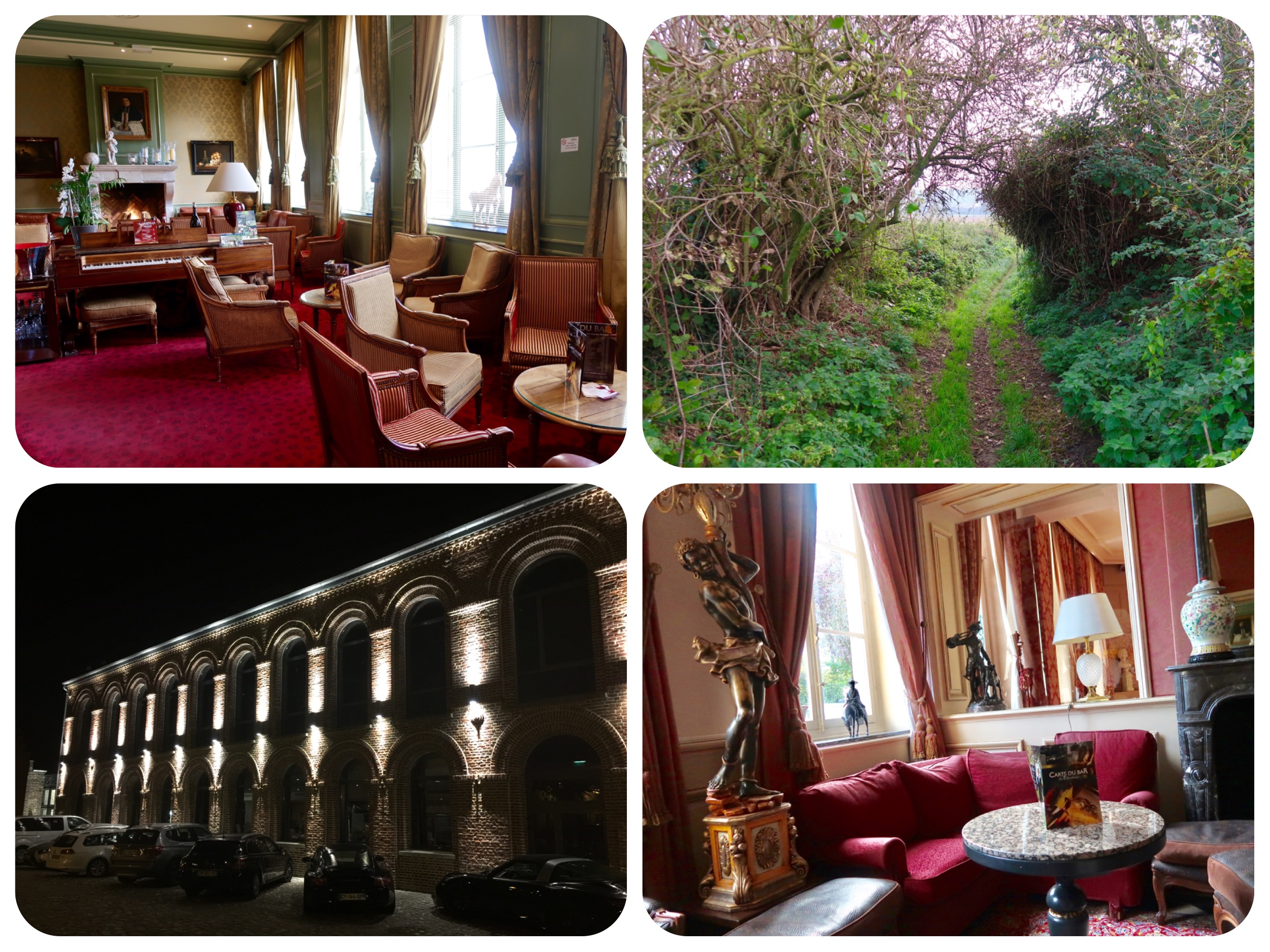 Day 8 – Walking the Via Francigena- From Auchy-au-Bois to Gosnay, France

This morning the owner of the farmhouse at which we stayed made us breakfast, stamped our pilgrims’ passports, and took our photo for her guestbook.

During the night, I did not sleep so well, since the bed creaked every time Jules or I turned sideways or turned to sleep on our backs.
It is surprising to me that I was not dead tired from the long day of walking yesterday.

Almost immediately after breakfast, I developed a very itchy rash on both of my arms all the way to my elbows.
As we were walking in the fields, it occurred to me that the night before I had hand washed my hiking shirt with a concentrated laundry soap, and I must have not rinsed it well enough.
I was having a reaction to the soap.
Normally I have no allergies of any kind so I was baffled, but somehow I was convinced that it was the soap on my shirt that was causing the rash.

It was a very cold morning, but I knew I had to change my shirt.
In the middle of the fields, away from any farm houses, I took off my shirt.
I did not need to put another shirt on, as I was walking with layers of another hiking shirt and a fleece.

I strapped on my backpack and we kept on walking.
In less than an hour all the red rash was gone and the itching had stopped.
My arms looked like nothing had happened.

I decided not to use concentrated laundry detergent again to do my hand washing, and planned to wash my shirt again with hand soap, when we get to our hotel tonight.

The walk today was through small villages and agricultural farms, on a narrow grassy path that was muddy and wet and soaked our shoes.
In the last part of the day, we walked along a busy road full of speeding cars.

By midday, we stopped at a locals’ bar for coffee.
They had no food, but the coffee was good and we got to use the toilets.
The locals all gazed at us curiously and wished us a good walk.

It is beyond me why so many French people keep insisting on not learning English.
It is understandable that the older generation does not bother to learn English, since there was such a bloody history between England and France, but many of the younger generation we’ve met, also speak little or no English.

And when I say they speak no English, I mean they do not speak one single word of English.
One might say that it is a remnant from colonial days, in which countries like England, Spain and France, colonized and annexed many territories around the world.
France spread its territories from the Caribbean sea, all the way to Tahiti in Pacific Polynesia.

The truth is that learning how to speak English, is a good move for any French person who wishes to travel the world without a French speaking translator.
Beside making traveling easier, English is also helpful if you wish to work or live in a foreign country.

This insistence on not learning English is truly foolish.
I have a girlfriend who lives in Switzerland.
Her two daughters, who just finished high school, speak fluently the Swiss dialect, German, French, Italian, Spanish, English and Hebrew.

I have always viewed learning more languages as opening doors of wisdom and more possibilities for yourself.

The day got sunny and warmer and we took off our warm fleeces.
We did not pass by any places to dine, so we stopped at a supermarket and bought some pastries and ate them as we walked.
I looked around for a bench to sit on, but there were none.

By the end of the day, we made it to our hotel for the night.
It is a glorious sprawling Chateau, built in the 1400’s and made into a lavish country hotel in the 1800’s.
It is adjacent to the Best Western Premier hotel which is located in one of the brick buildings on the estate, and the two properties share three good restaurants.

The Hôtel La Chartreuse du Val Saint Esprit, has nice classic French rooms with very high ceilings and beautiful tall windows.
The gourmet restaurant is pricy with set menus from €75-€150 per person for an appetizer, a main dish, a cheese plate and a dessert.

The second restaurant is a Brassiere, serving traditional French food.

We chose to dine in the third restaurant, called Le Vasco, which offers Asian influenced food.
The dining room was covered with old black and white photos of French people who hunted in Africa and Asia.
The hunters always posed with the dead animal like a trophy.
I saw tigers, leopards, alligators and lions, all dead and tied up by their feet to a thick stick that was carried by the natives.

One day the mystery was solved.
As we walked among the fields, a group of five shiny luxury cars pulled into the side of the fields.
After wishing us a good walk, we saw that they were mostly couples, all dressed in hunting clothes.
They open the boot of their cars and put on long gum boots.
Then they put on hunting hats, loaded their rifles and released their dogs into the fields.

The pheasants nest on the ground of the fields, between the very tall yellow rapeseed or the tall corn.
The dogs chase them away and as they fly up in the air, the hunters shoot them.
For days after, I felt eerie while walking in the middle of the fields, hearing gunshots from nearby fields.

The dinner was fabulous.
It was a nice change from the diet of bread and cheese we have been having for lunch, since we entered France.

I am not as good a Buddhist as I should be….
The Buddha taught that one must not love luxury.
I admit that I love luxury.
I loved taking a hot shower tonight with good pressure in the shower and lots of hot water, drying myself with a fabulously fluffy towel and putting on the plush hotel bathrobe.

When I read some other pilgrims’ blogs who walked the Via Francigena, they describe camping often or staying in shared accommodations provided by local churches.
I don’t think I would enjoy that way of walking a pilgrimage.
I find a hot shower and a clean bed at the end of the day, a necessity, NOT a luxury.

Wishing you good night and many blessings,
Tali

Auchy-au-Bois to Gosnay, France
Accommodation:
Hôtel La Chartreuse du Val Saint Esprit, Gosnay – A beautiful Chateau built in the 1400’s and made into a lavish country hotel in the 1800’s.
It is adjacent to the Best Western Premier and has three good restaurants.