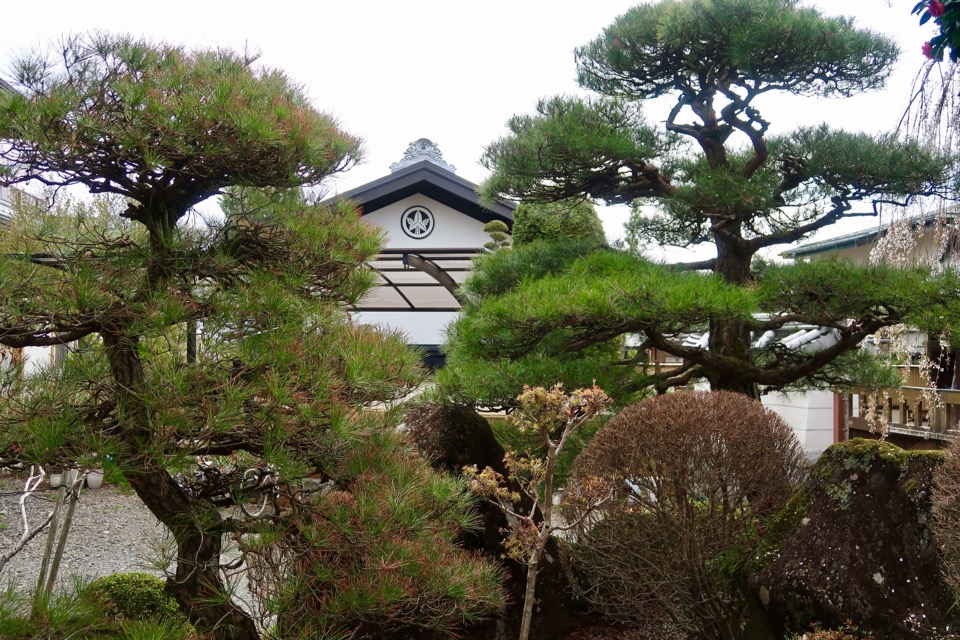 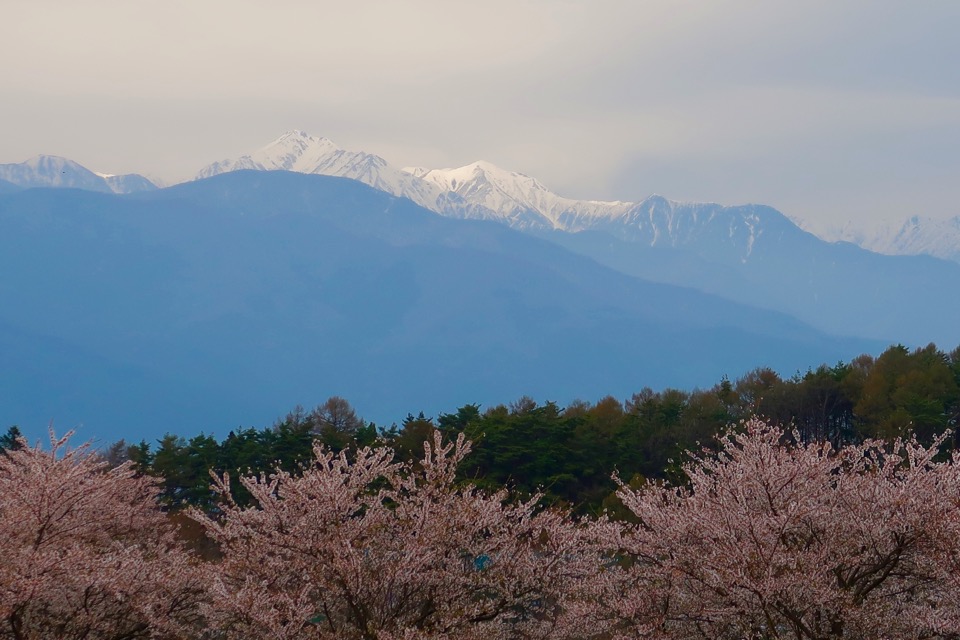 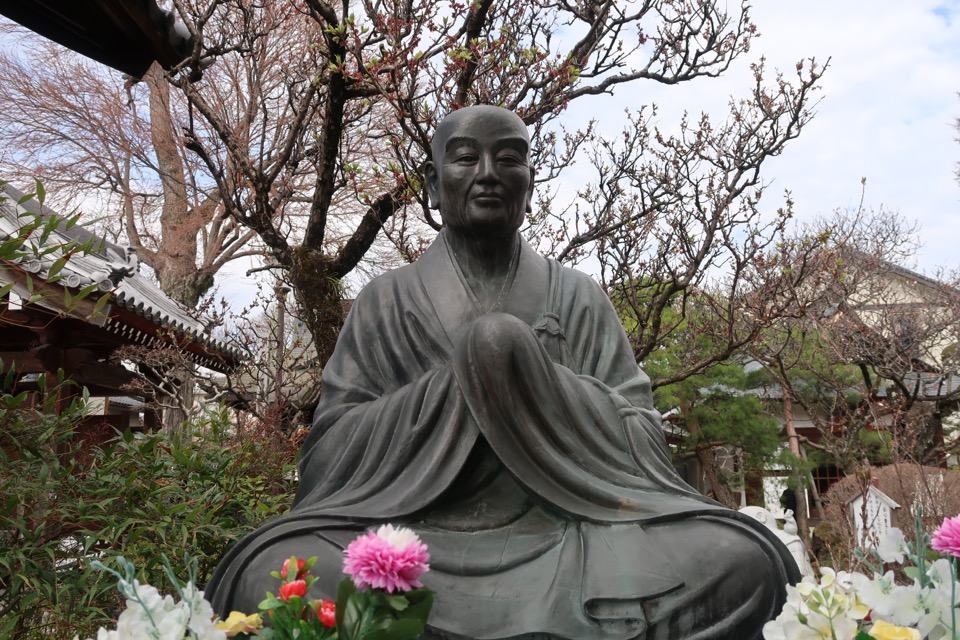 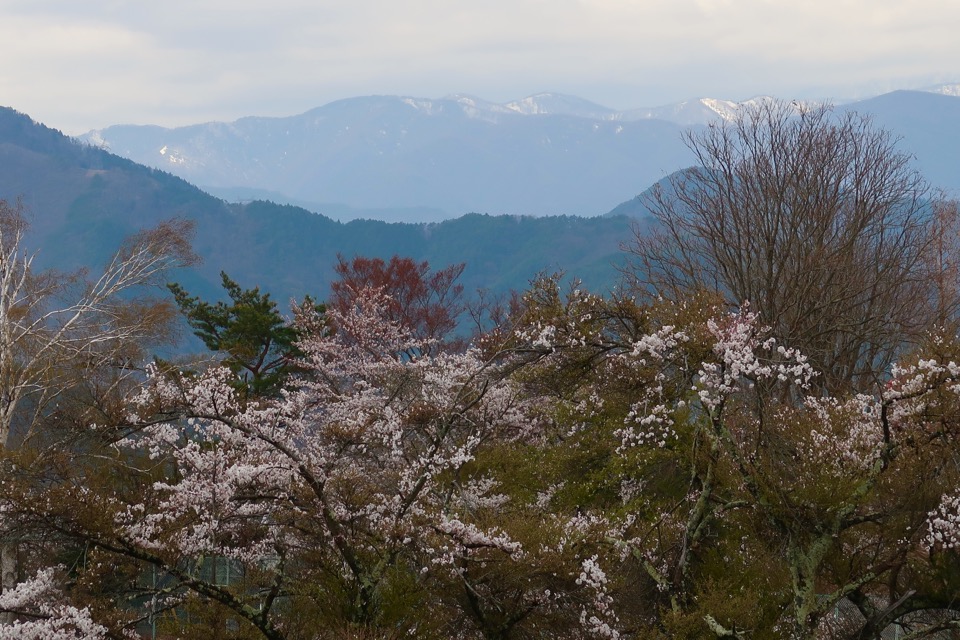 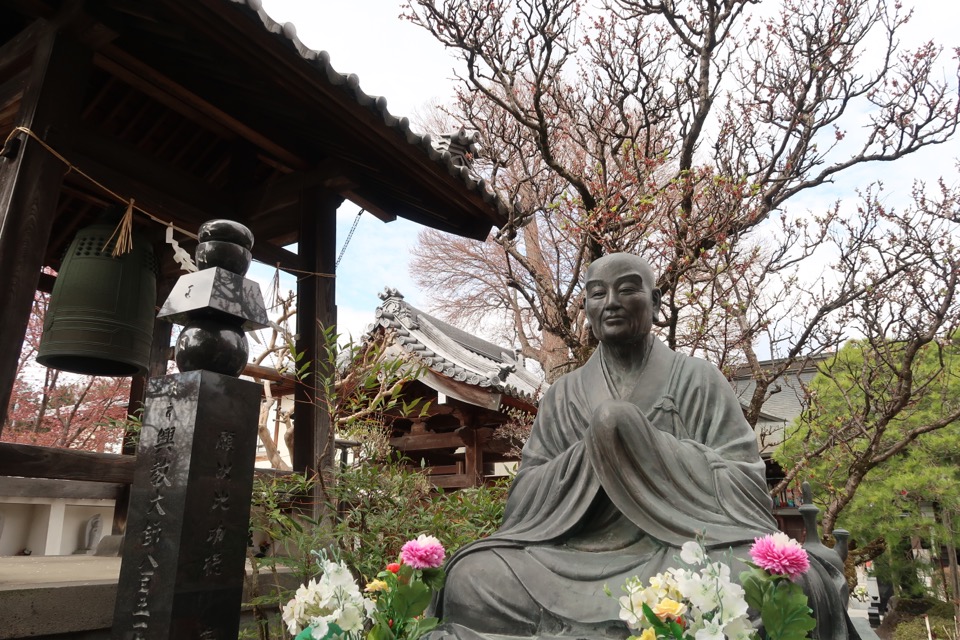 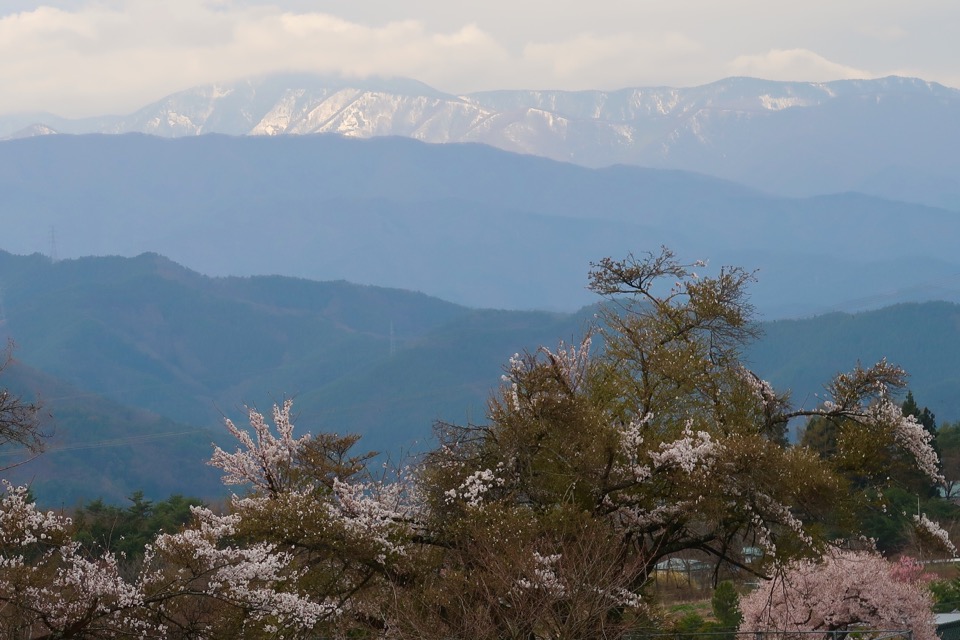 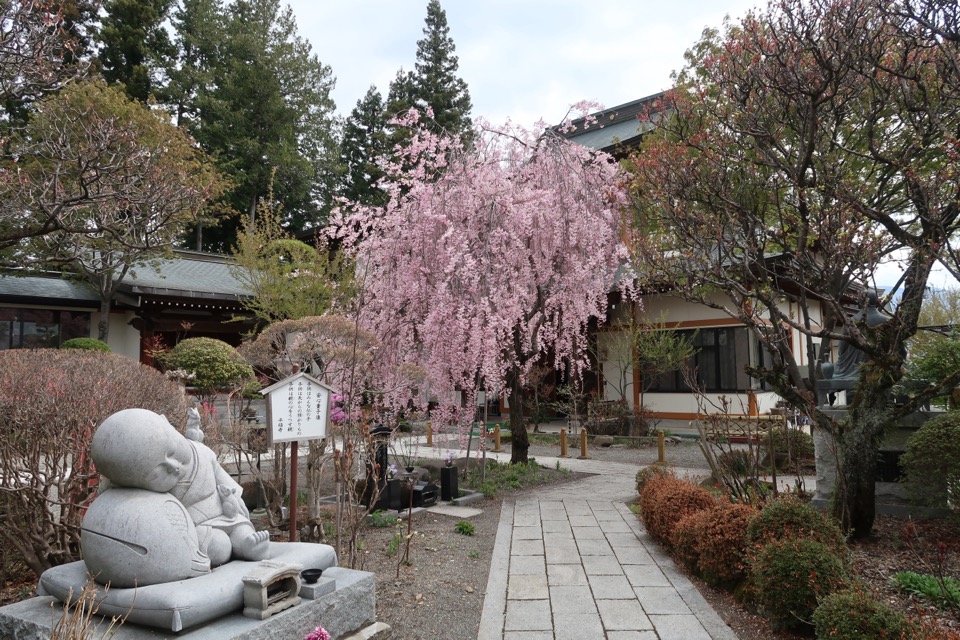 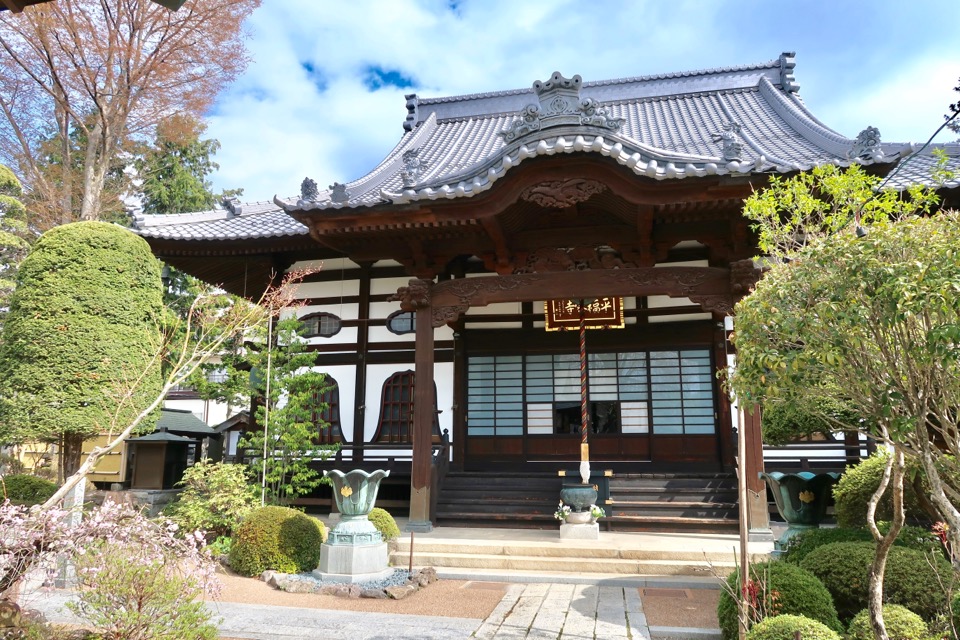 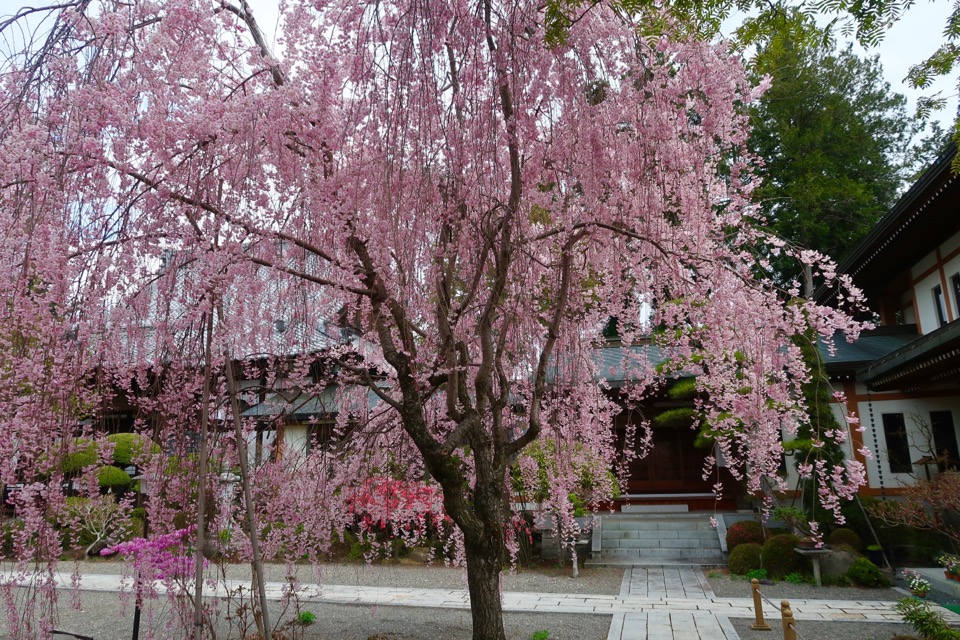 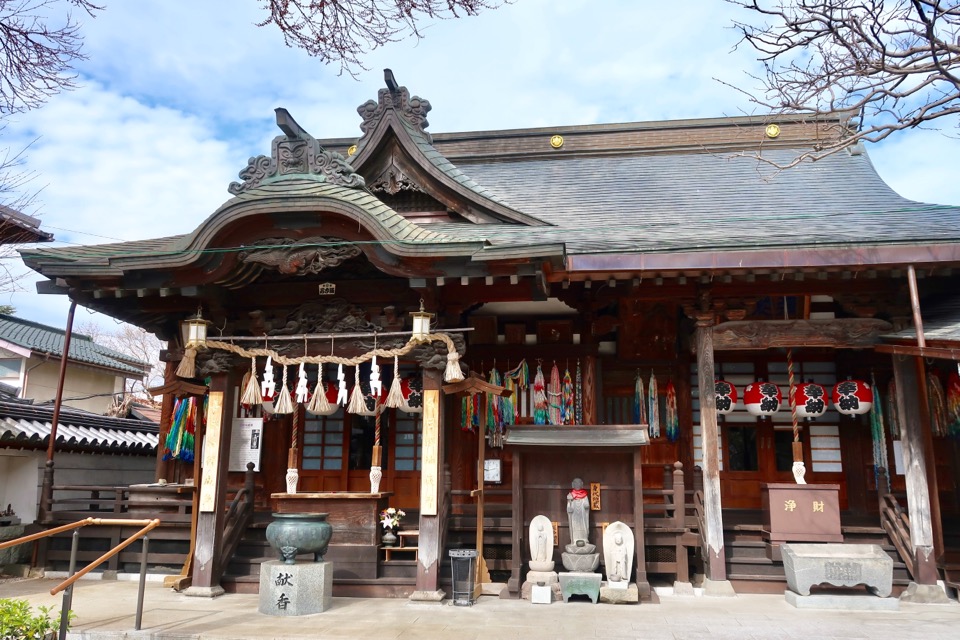 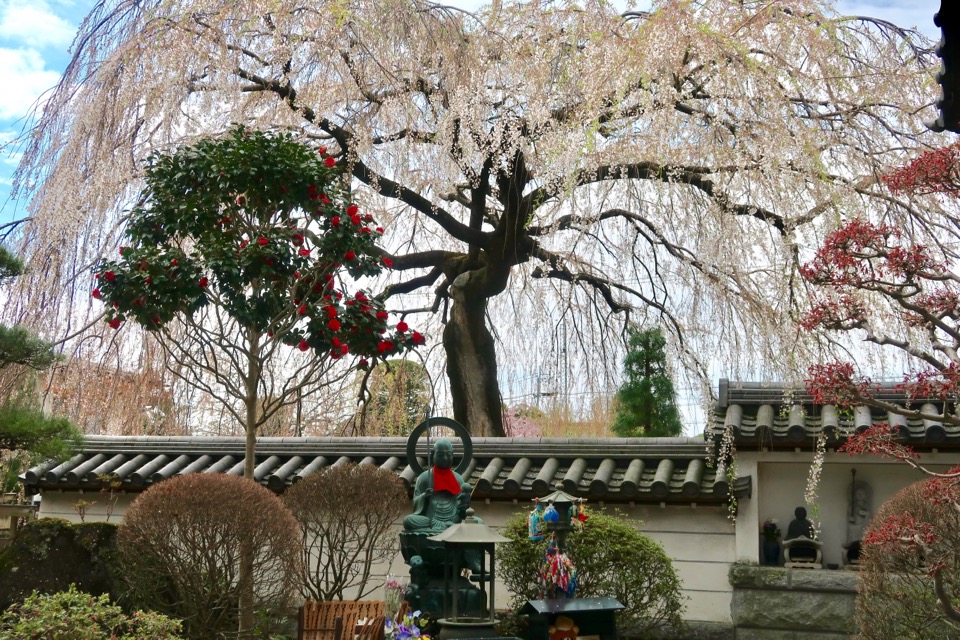 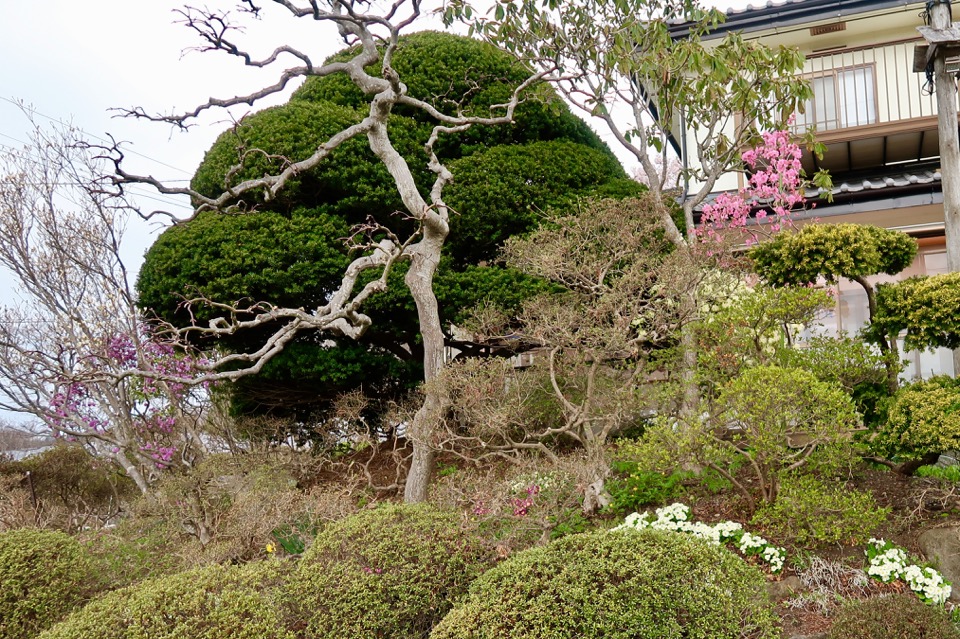 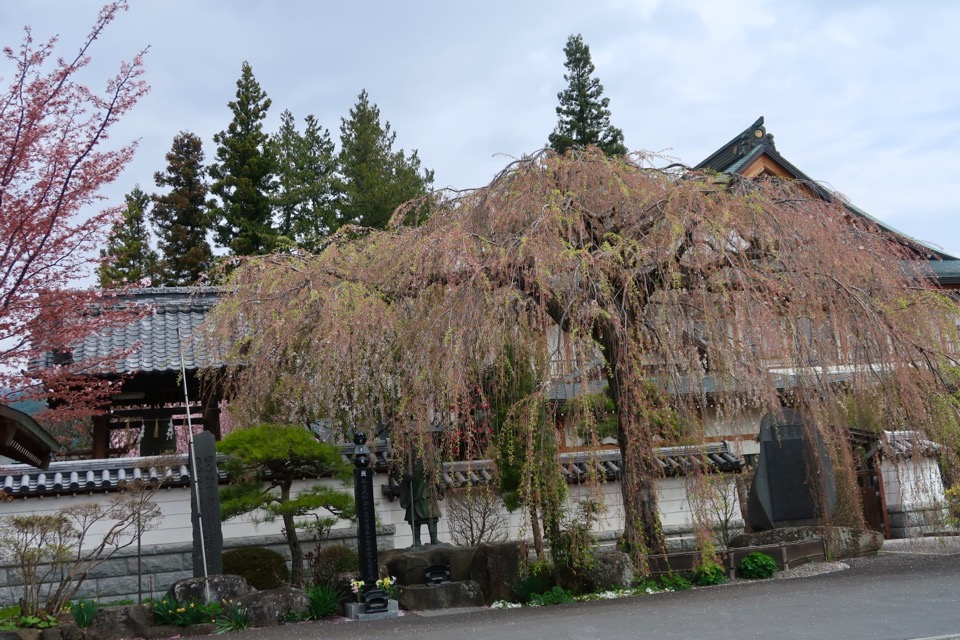 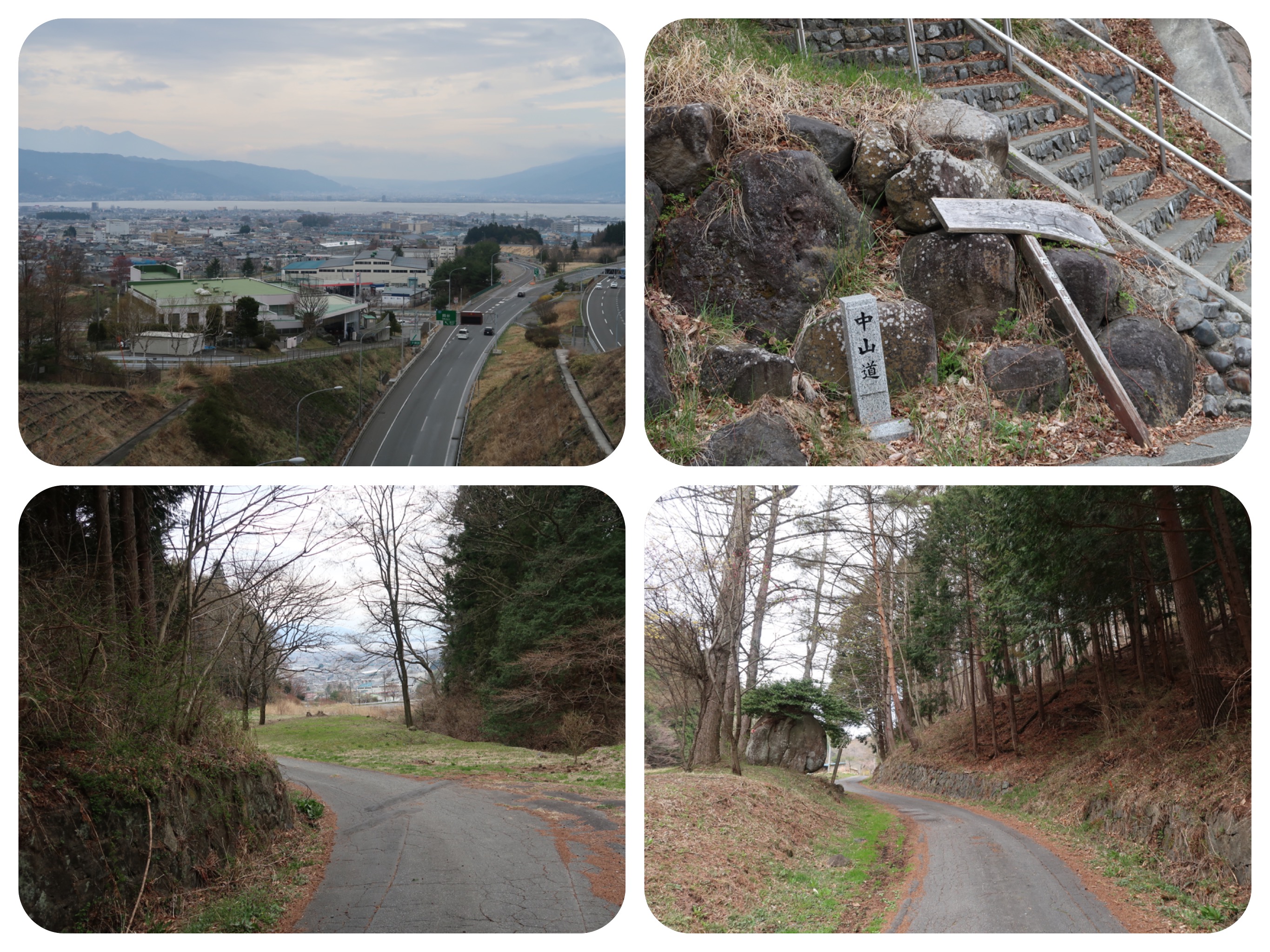 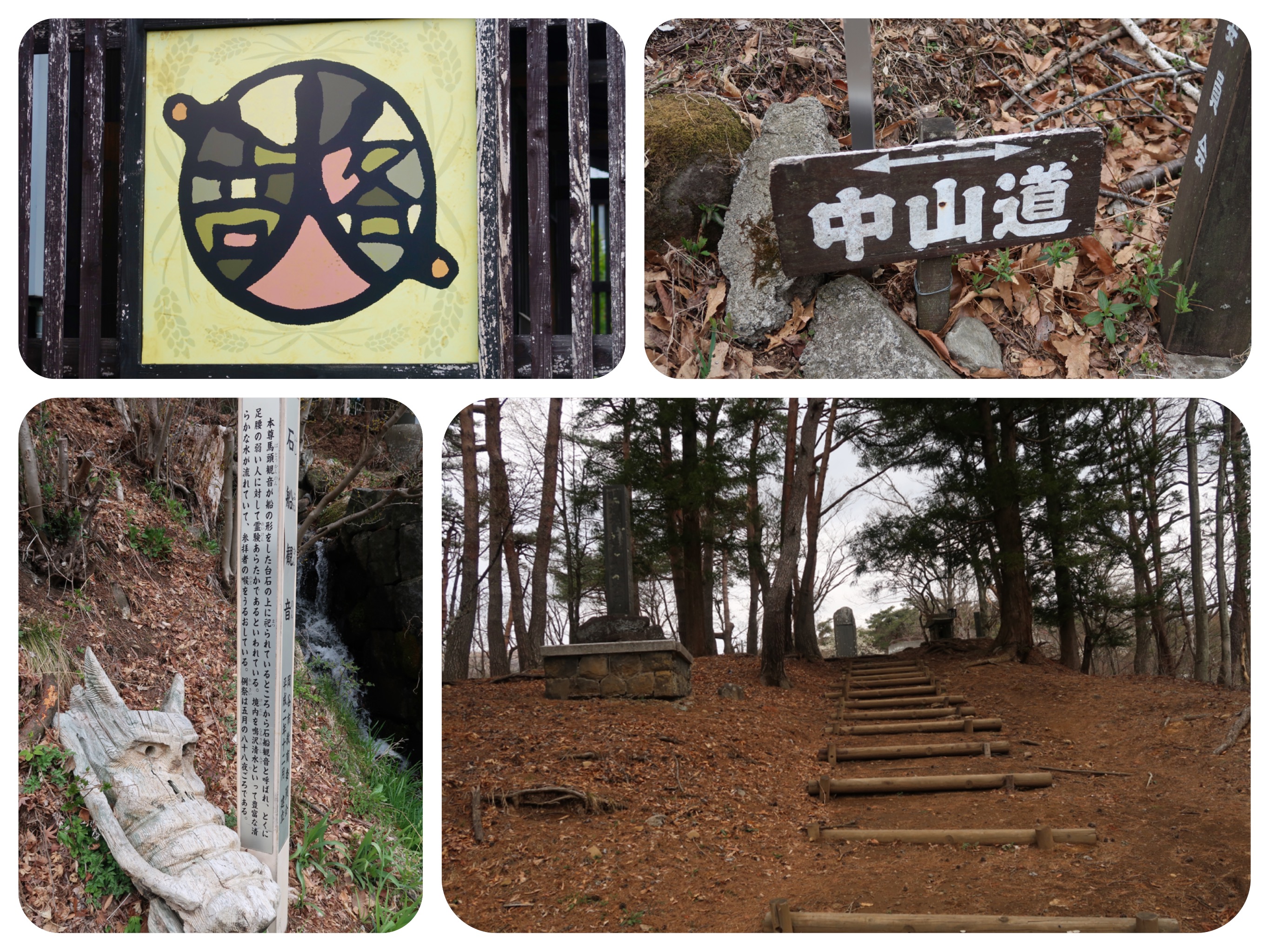 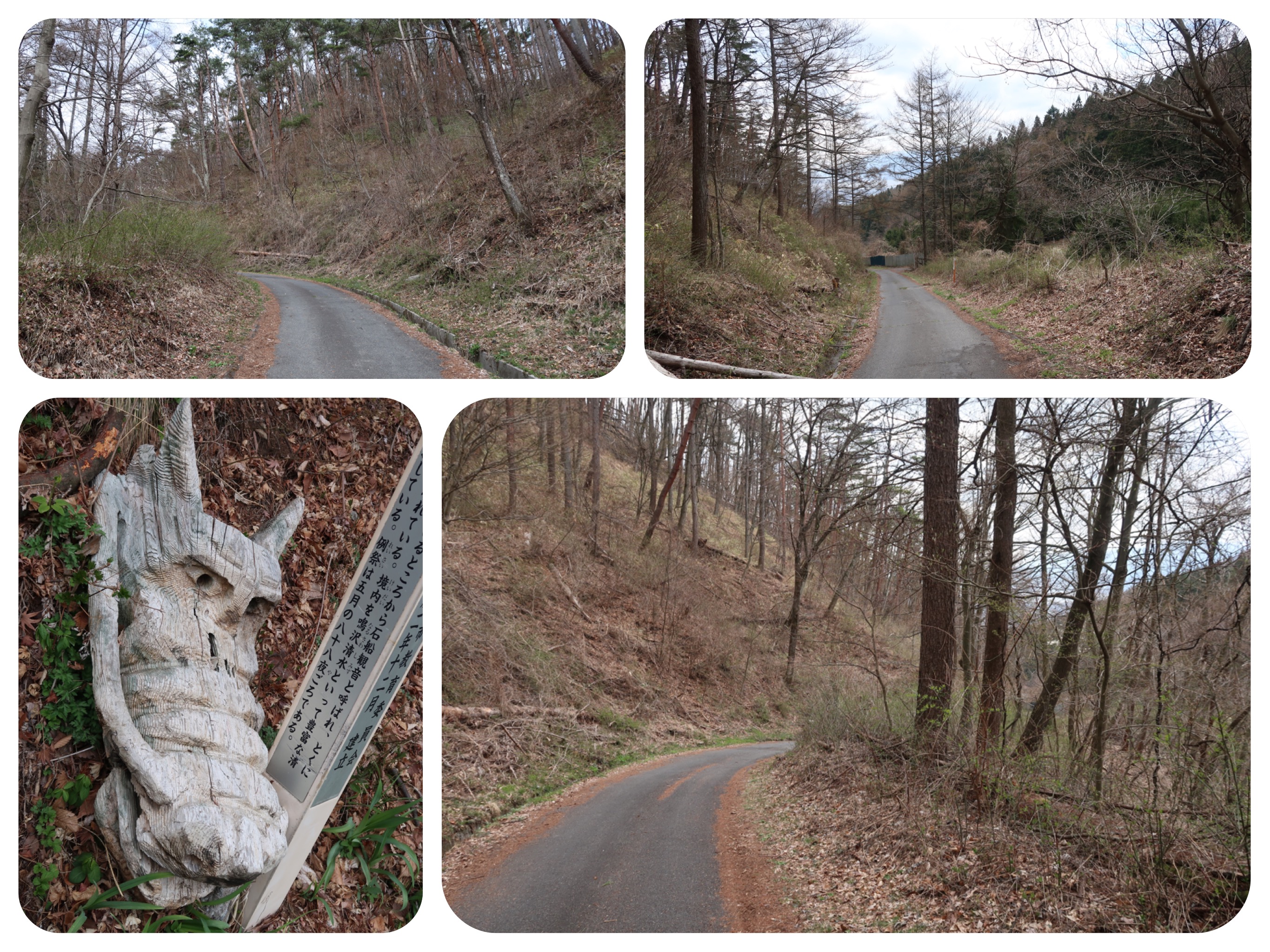 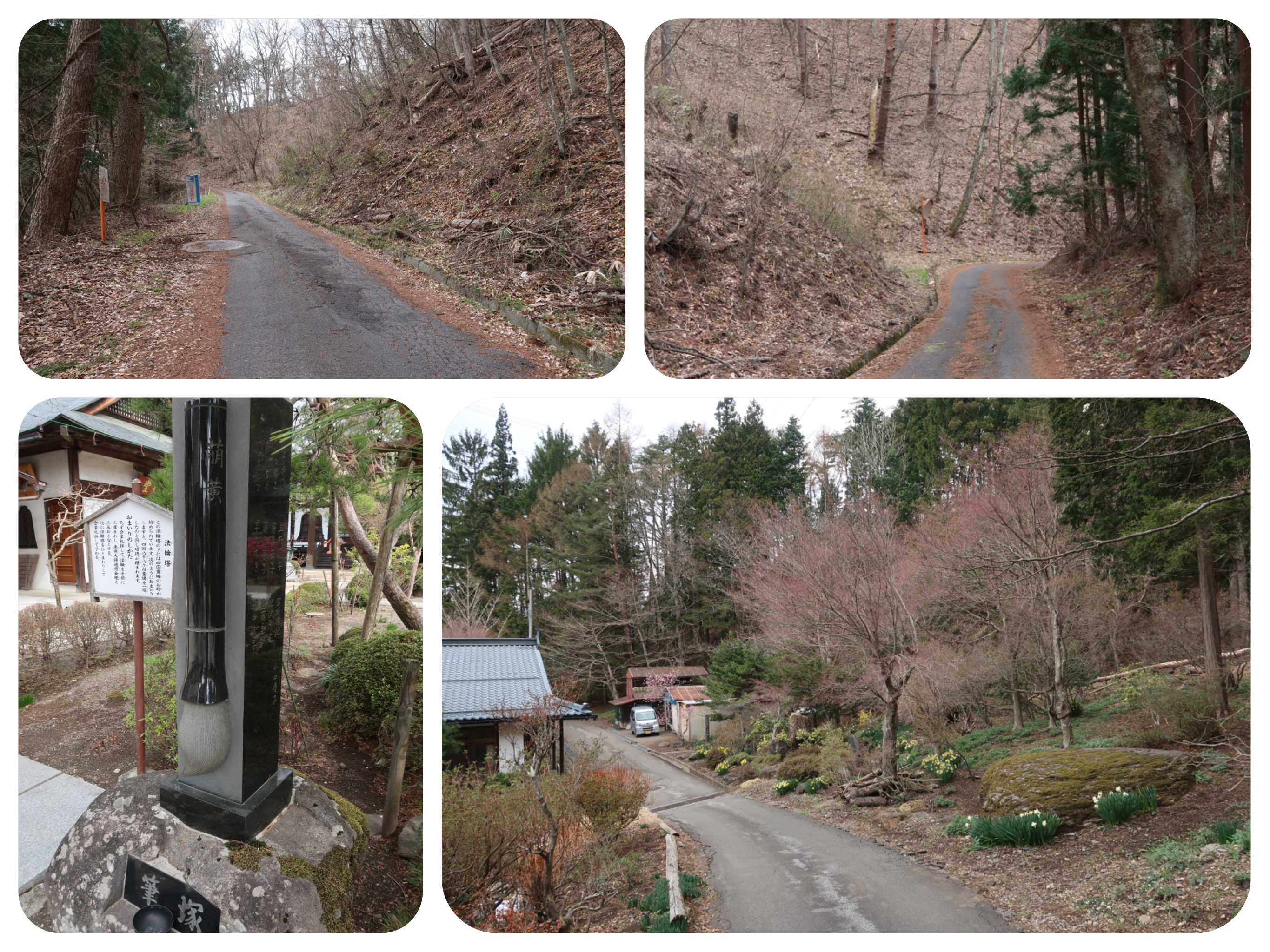 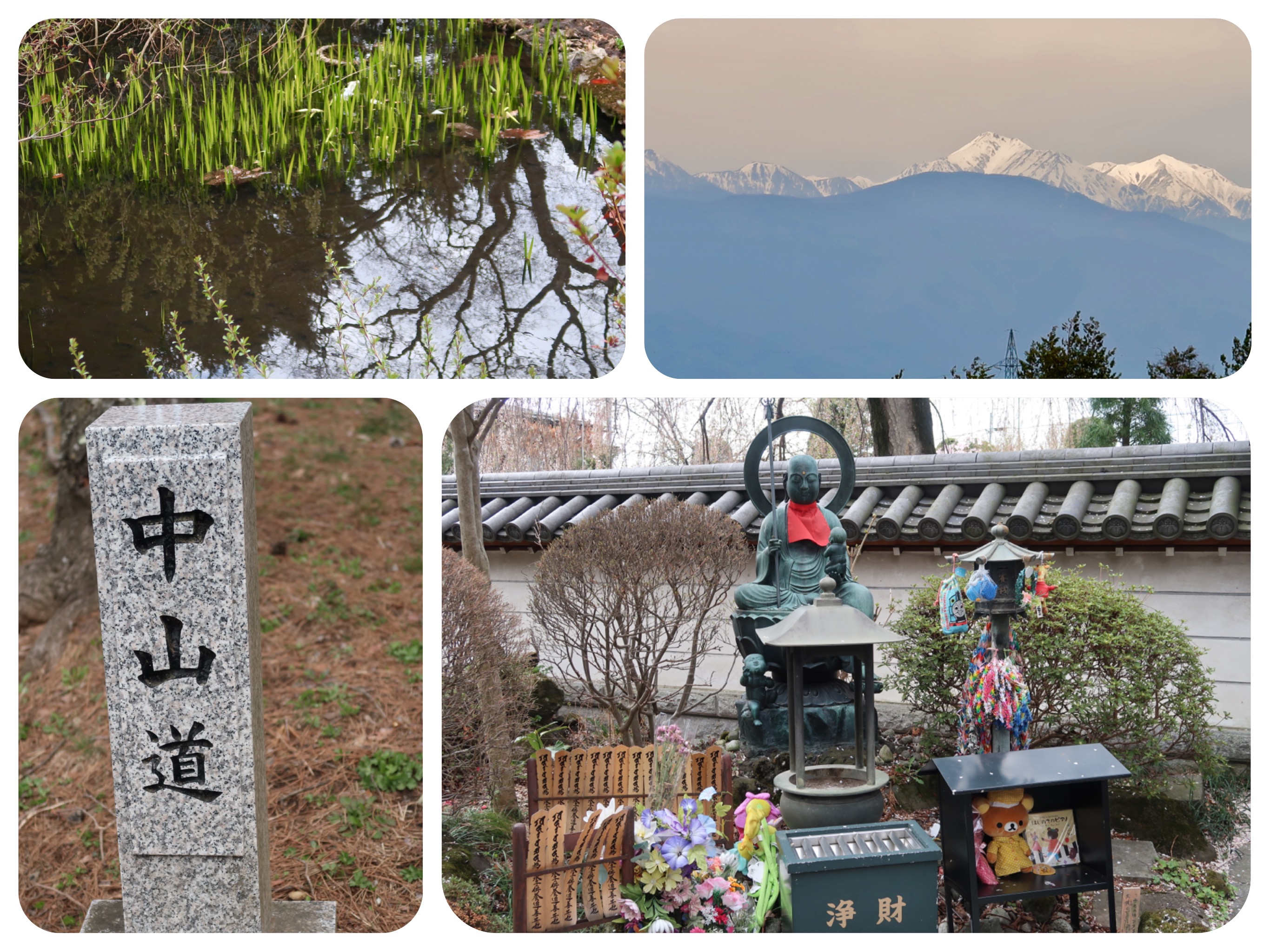 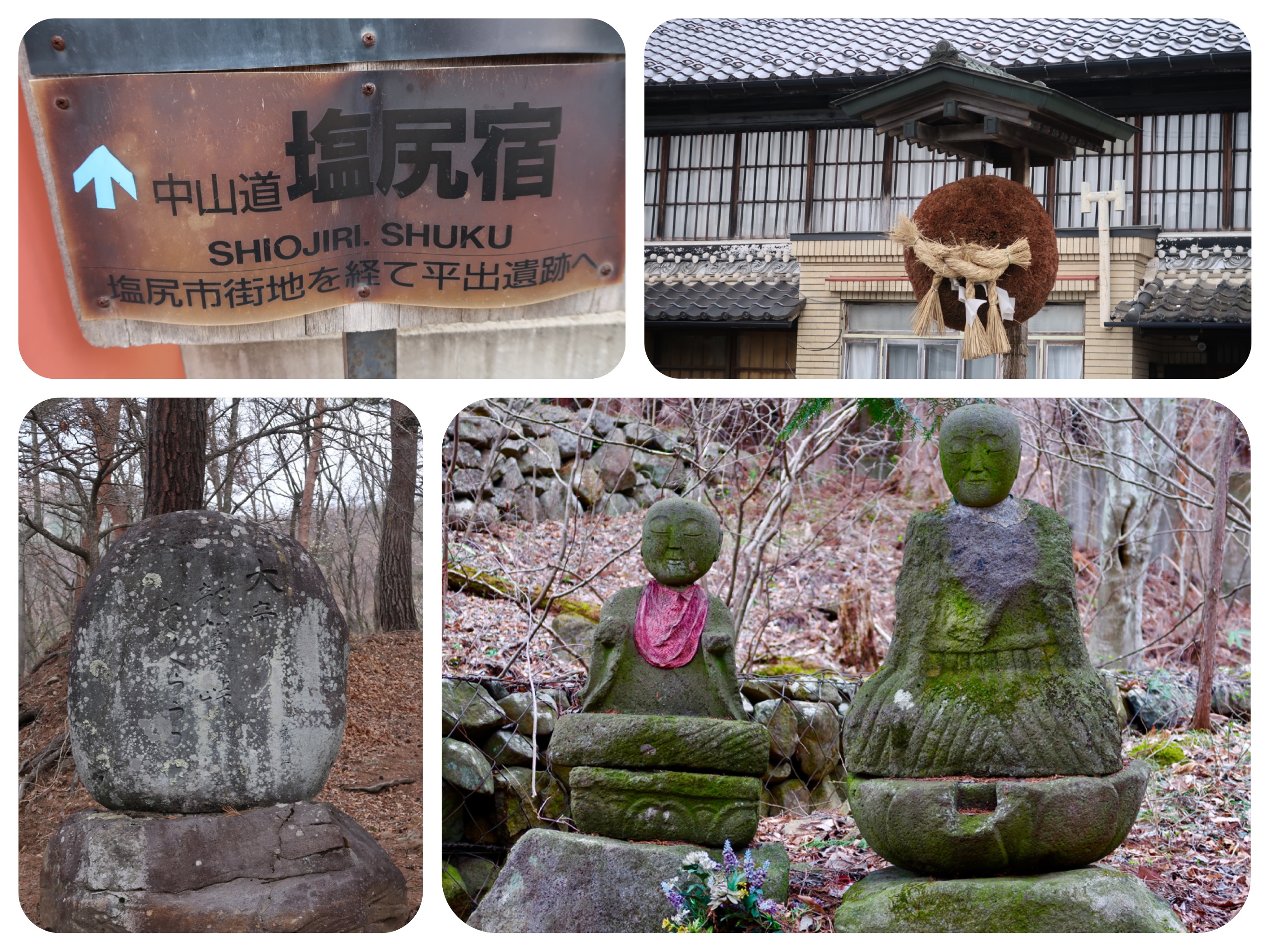 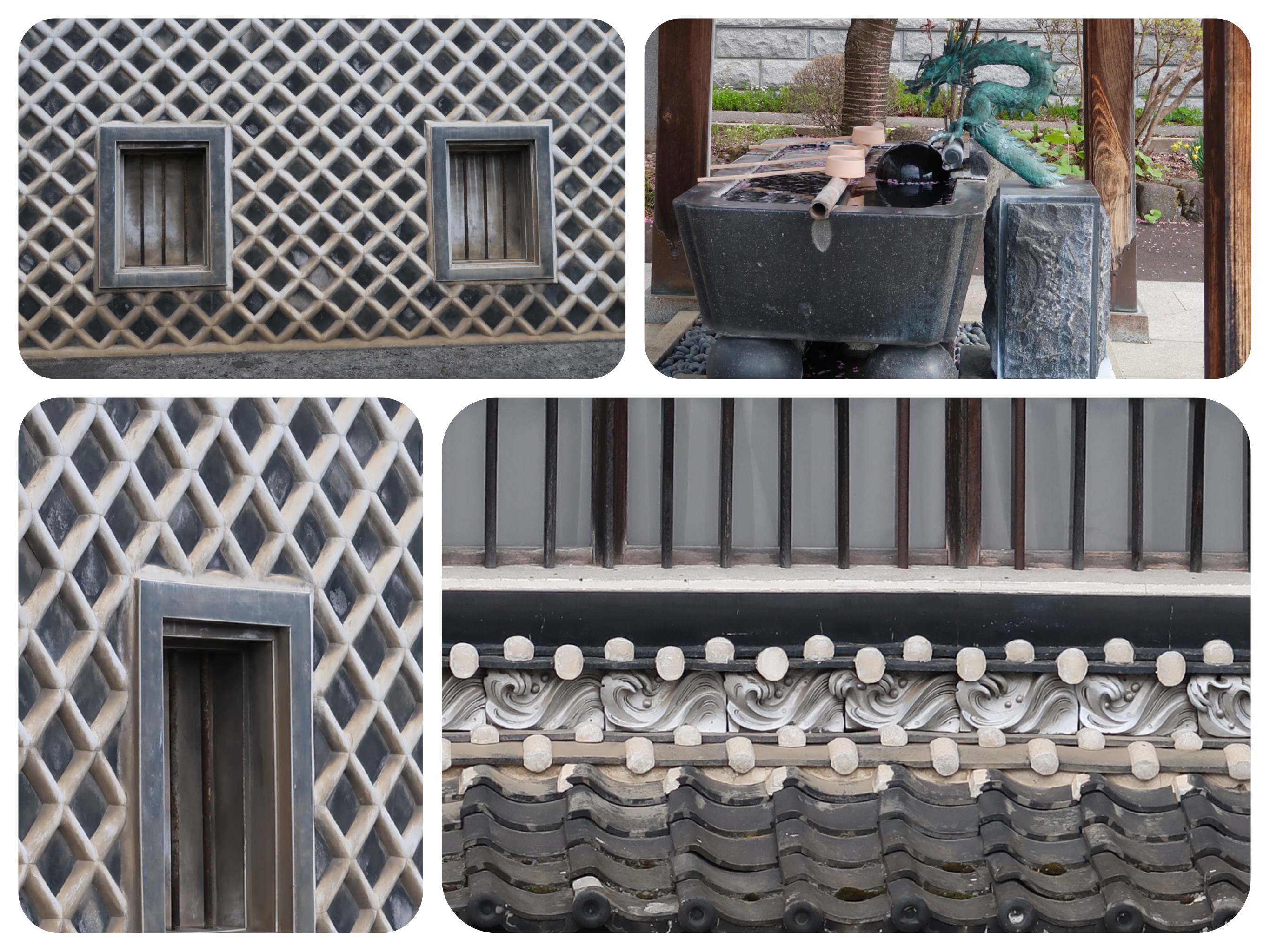 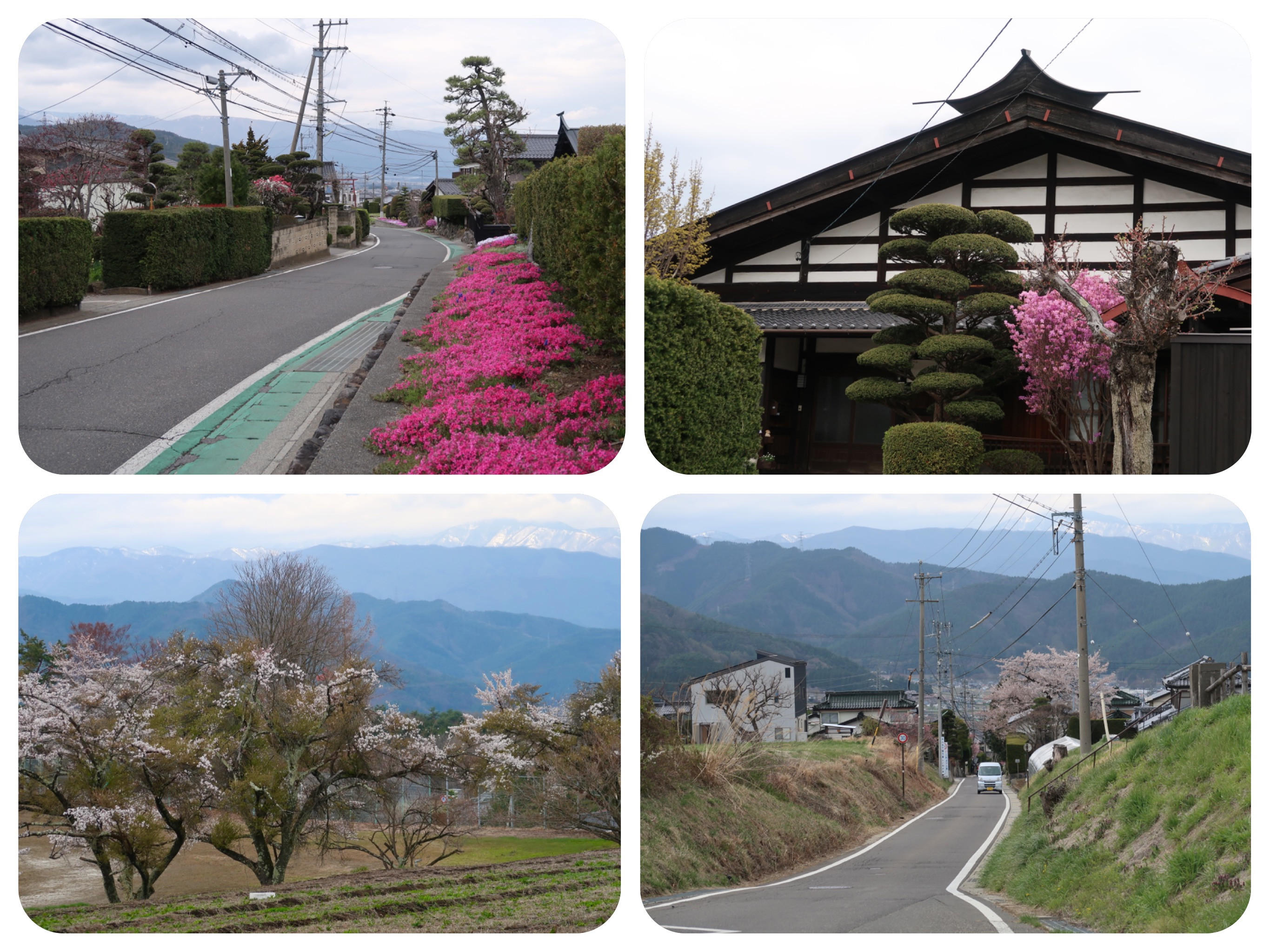 This morning, after enjoying another good Japanese breakfast and the motherly attention of the restaurant waitress, we checked out of the Gingetsu Hotel.

The friendly owners, a husband and wife, asked how my feet were doing and gifted us a toy kimono and a bag of sweets.
“Eat a candy when you are tired from the long walking, it will help give you energy,” she said in a kind voice.

As we reached the outskirts of town, she drove over with her car and ran after us.
For a moment, I thought we had forgotten something at the hotel, but she had come over to give us two booklets in Japanese, about the Nakasendo trail.
We bowed and thanked her many times.
Her kindness, and the gentleness we encounter so often in Japan, are a big part of why we love to visit Japan.

The walk was steadily uphill, which I hoped would take us over the pass without a very steep climb.
We stopped at a Buddhist temple and shrine, to admire their garden.

Then we walked on the road that rises above Shimosuwa.
We had stopped to look at the city stretched out below us, when I saw a couple of Shitake mushroom farmers in their small truck, who had stopped to talk to Jules.
In the back of their car there were some wood logs they were relocating to another shaded forest spot.

“Are you walking the Nakasendo?,” I heard them asked Jules.

“Yes, we are,” answered Jules.

“Well, you have to take the road going up on the right, and keep going up.
Do not cross the highway.”

We were grateful that they had come along, before we had walked too far in the wrong direction.

The we started walking over the Shiojiri pass.
It wasn’t a beautiful road, just an old unused paved road that rises over the city and then over the mountains.
Then it descends down into Shiojiri-Shuku.

I was happy that we were well rested, because the Shiojiri pass was short, but very steep.
In fact, we had to do a small game that I had invented to help us climb very steep trails.

I call it the “counting steps game.”
Instead of stopping whenever we felt like to catch our breath, we have to decide ahead when we will stop.
We walked side by side, deciding ahead to stop every fifty steps for a few seconds to catch our breath.

We were happy that we had decided to start early this morning, because the weather forecast called for rain in the afternoon, and we wanted to arrive in Shiojiri before it started raining.

Finally we arrived at the peak.
A few roads crossed the peak in different directions, but we followed the GPS on my mapping app.
Unfortunately, because it was quite overcast, we did not have the famous view of Fuji-San that Basho wrote a poem about.

The descent from the peak of Mount Shiojiri was much longer than the ascent, and led through an area of farms.
We met a man walking the Nakasendo in the other direction who told us it is a very tiring walk.
We sympathized with him.

The next group we met, looked like a community walking club, out for a day or a weekend of hiking in the countryside.

The rural road led directly to the outskirts of the town, and then we turned right, and followed the Main road to the train station, which was the end of our Nakasendo walk for the day.

The Nakasendō trail is interwoven with the main road, but for the most part we walked the quiet streets of Shiojiri and enjoyed the well preserved architecture of the Edo Period.

Since we were so near to the charming city of Matsumoto, we decided to take an extra day to visit the place and see the sights.
After our day in Matsumoto, we will take the train back to Shiojiri and continue our walk from where we have stopped.

From the summit of Shiojiri-toge, there is a fine view through the trees surrounding Lake Suwa to the distant Mount Fuji .
The summit itself is occupied by a large memorial which commemorates the fact that the Emperor Meiji also stopped here to admire the view during his journey along the Nakasendo in 1881.
The poet Basho also walked this pass and wrote a poem to memorialize his visit.

Shiojiri-Shuku, Station #30.
Shiojiri has long been an important place.
In 1843, it had 75 inns, more than any post-town in Nagano prefecture.
Today, the old village has grown into a small provincial city because it is now a railroad junction and a major marshaling yard for freight trains.

The station, and the new city’s center, stand a little apart from the old post-town which is well preserved.
Shiojiri has long served as a junction town.