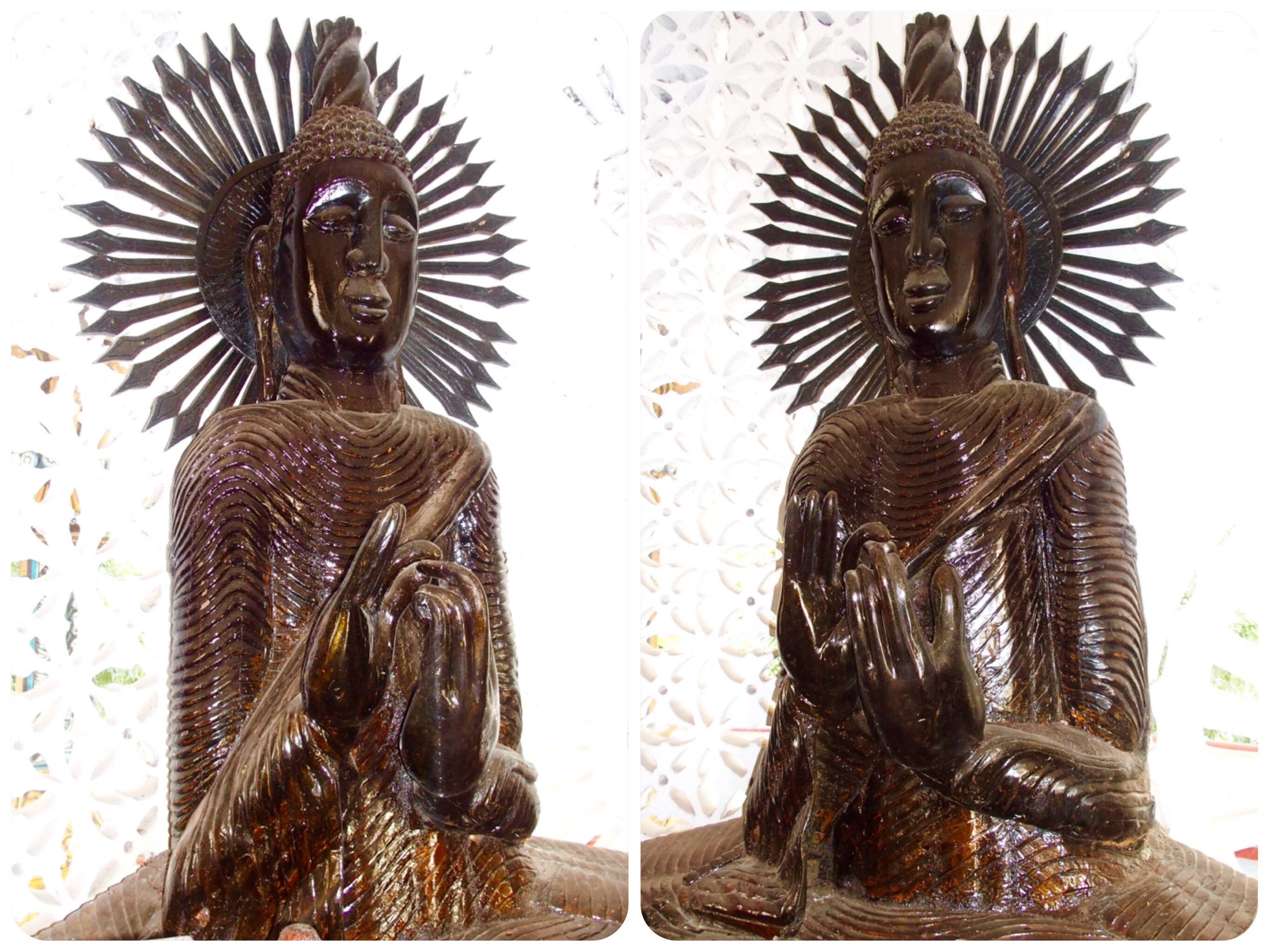 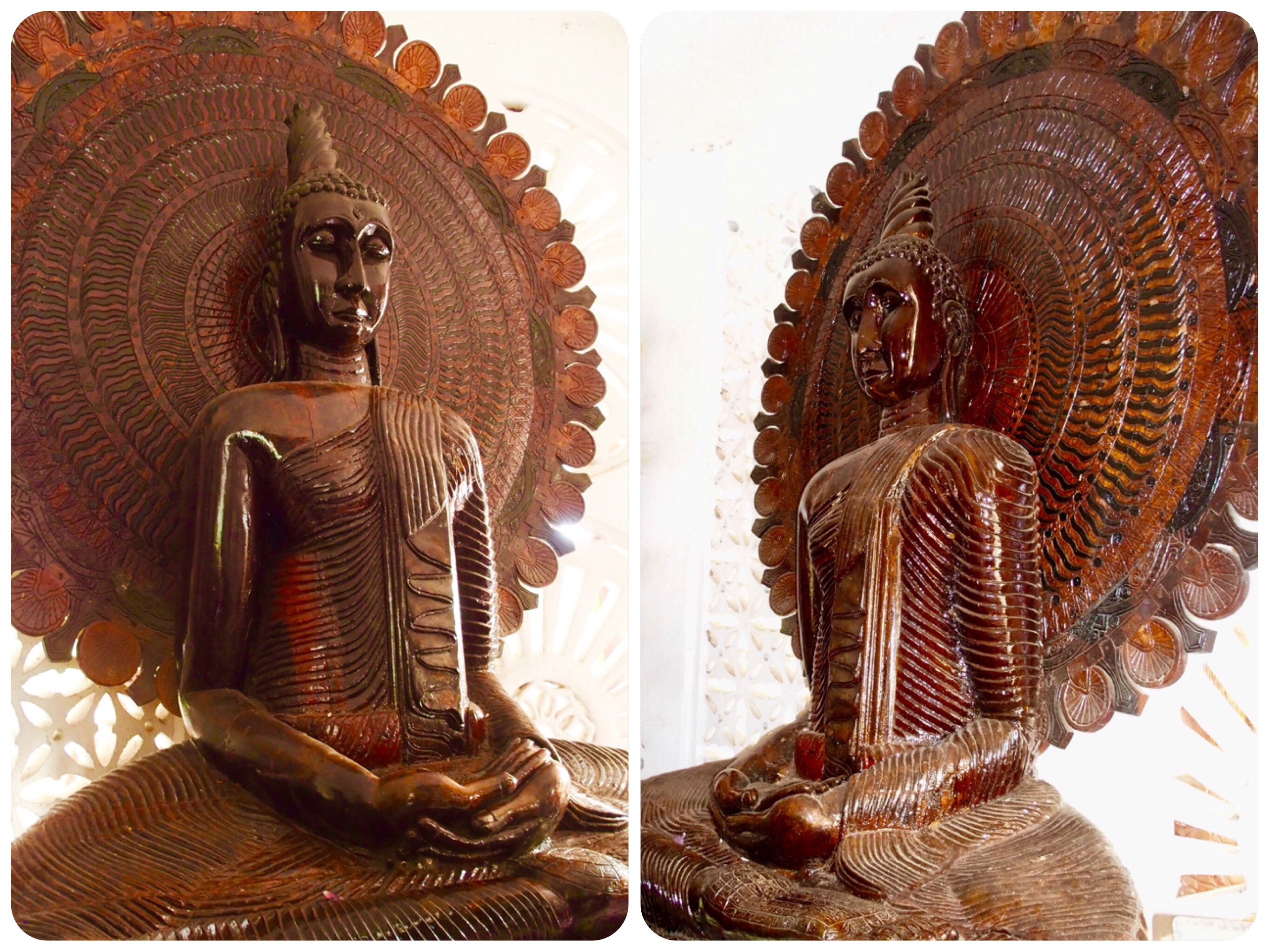 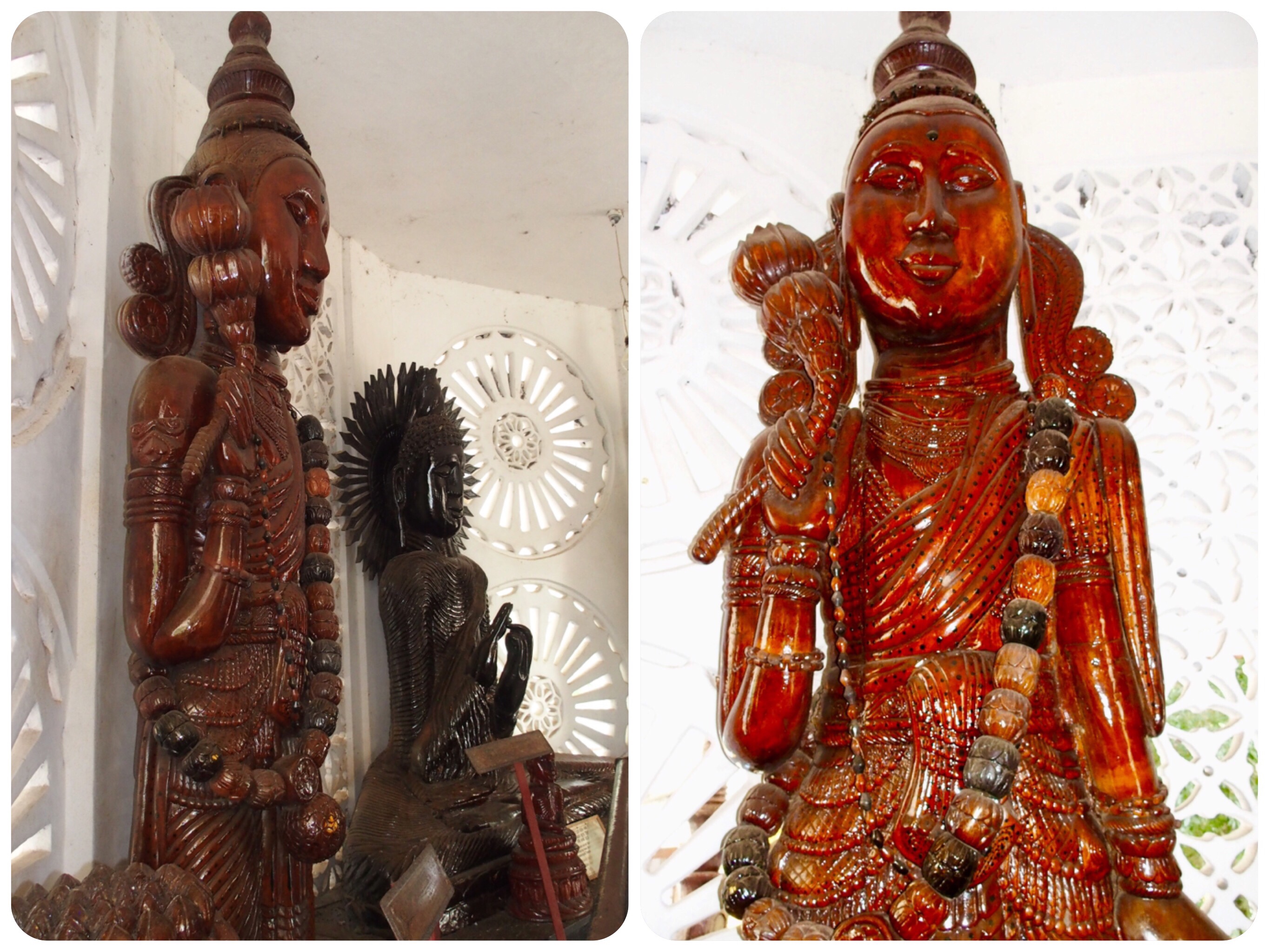 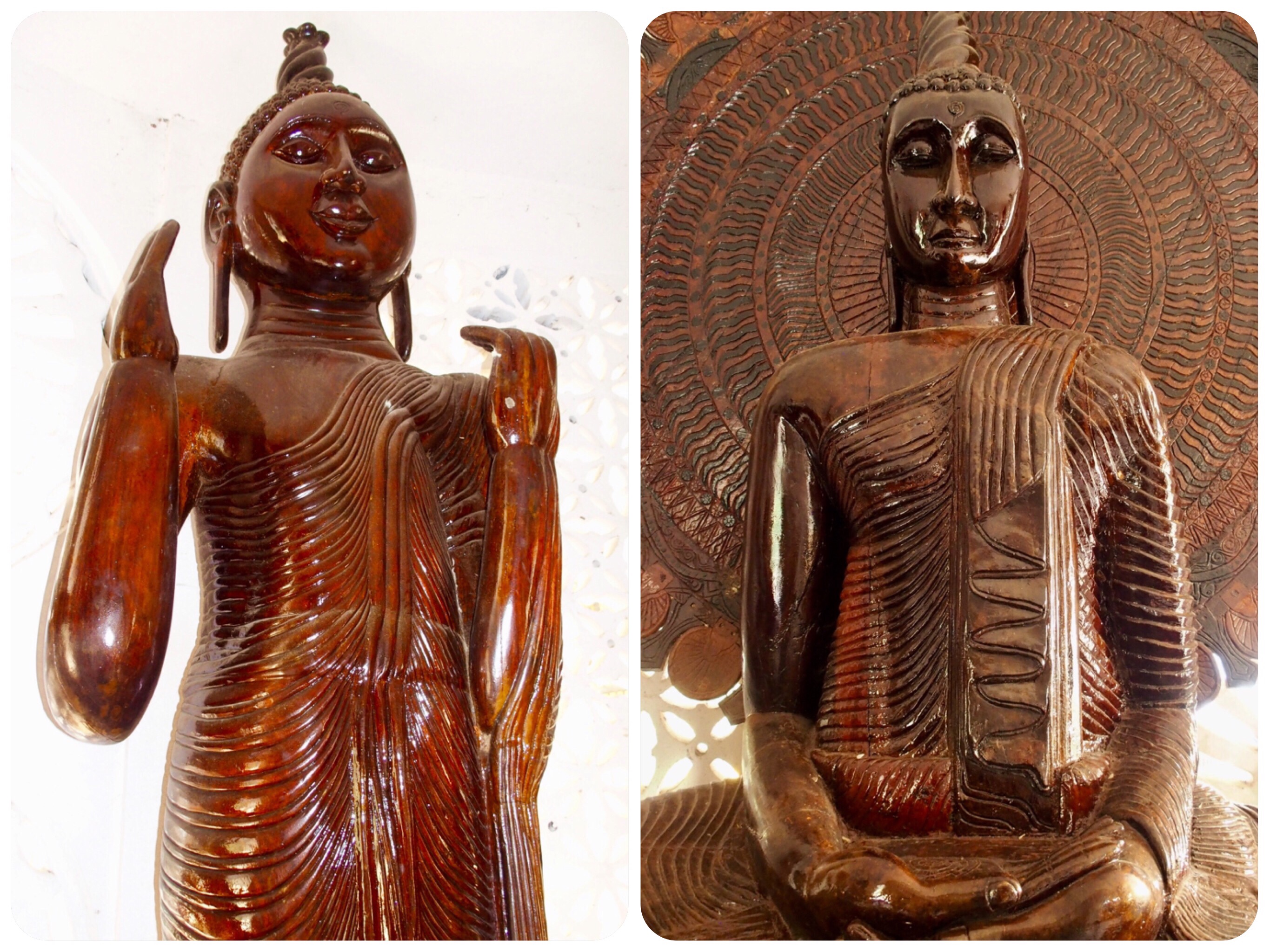 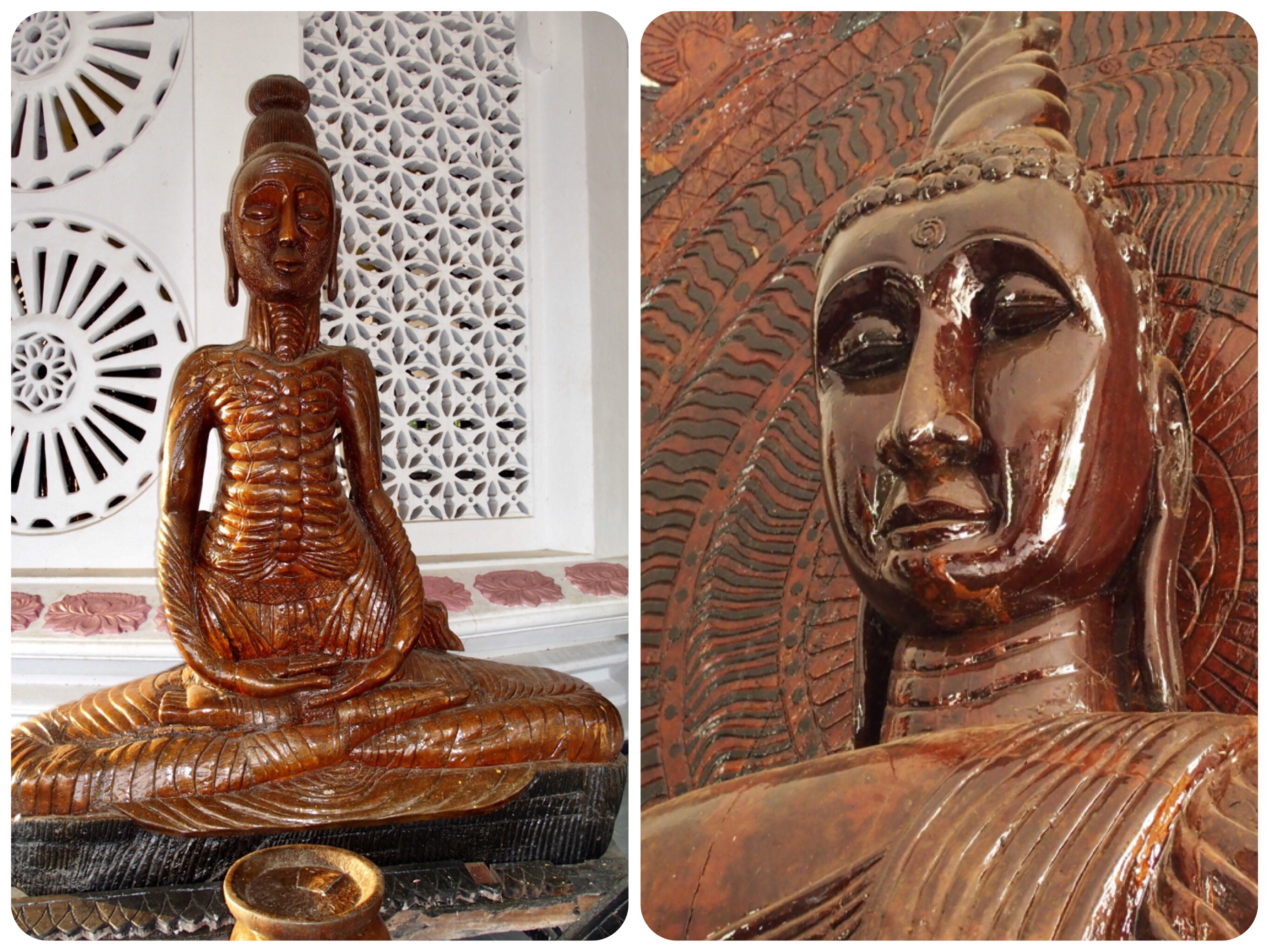 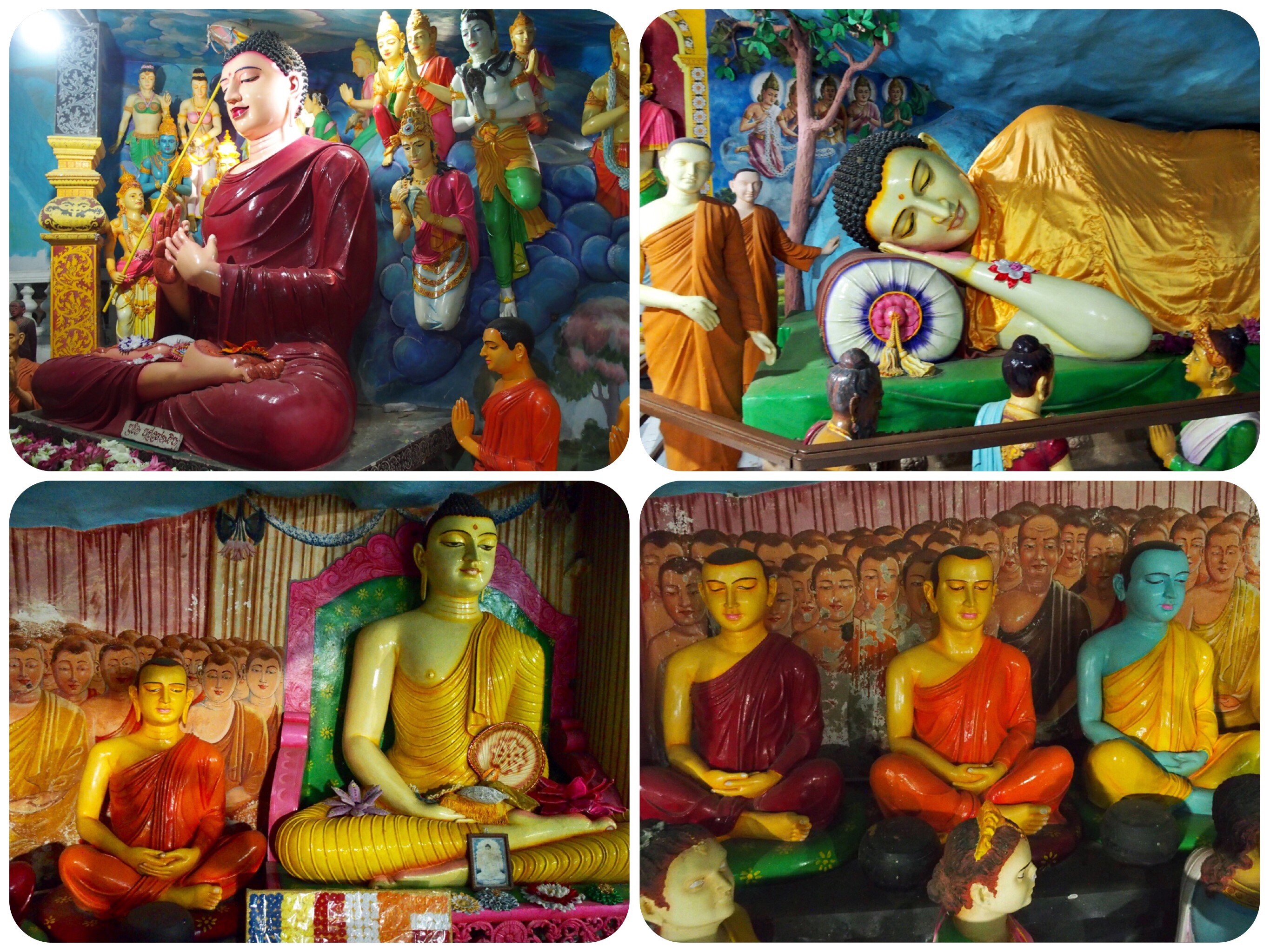 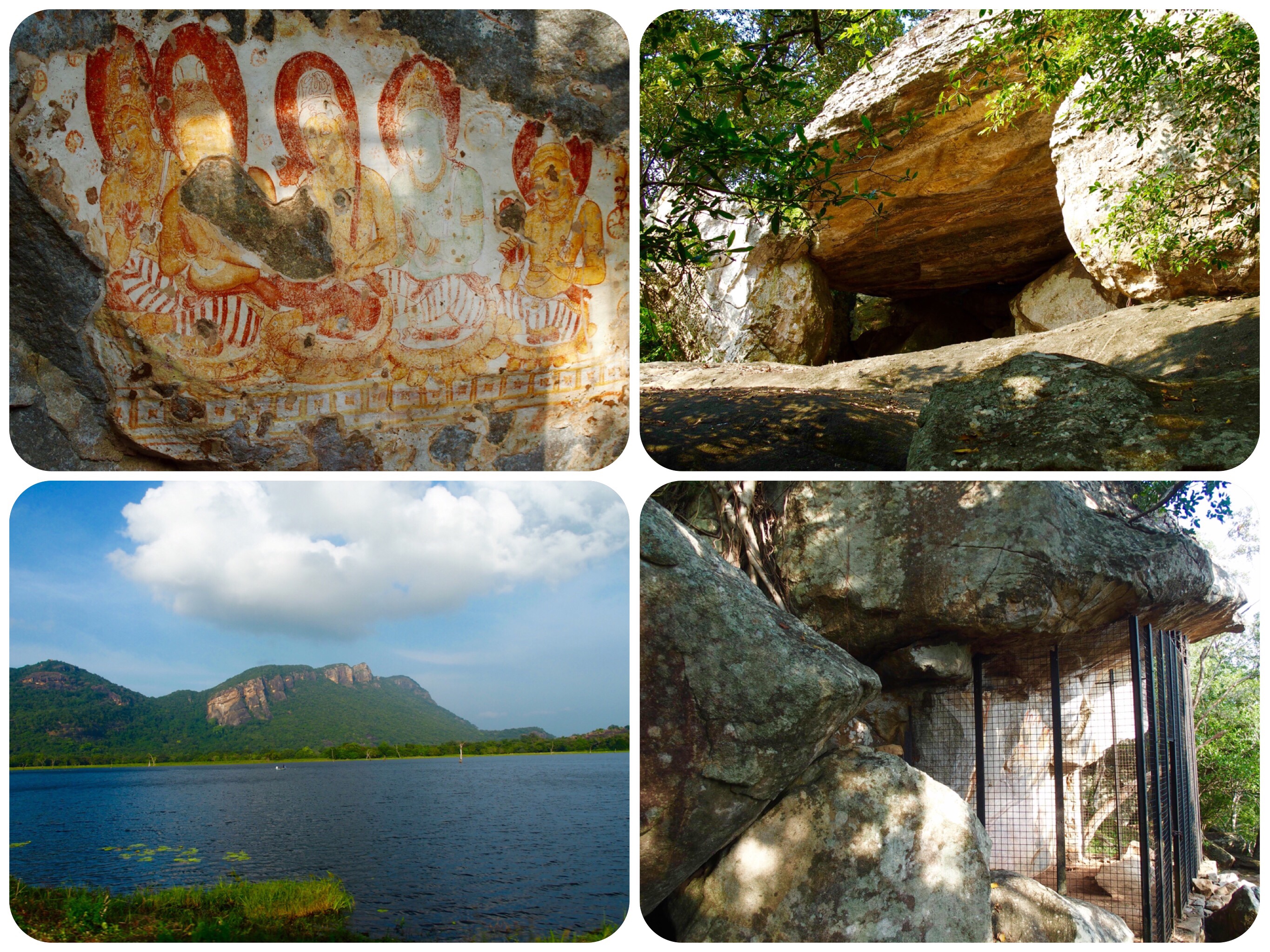 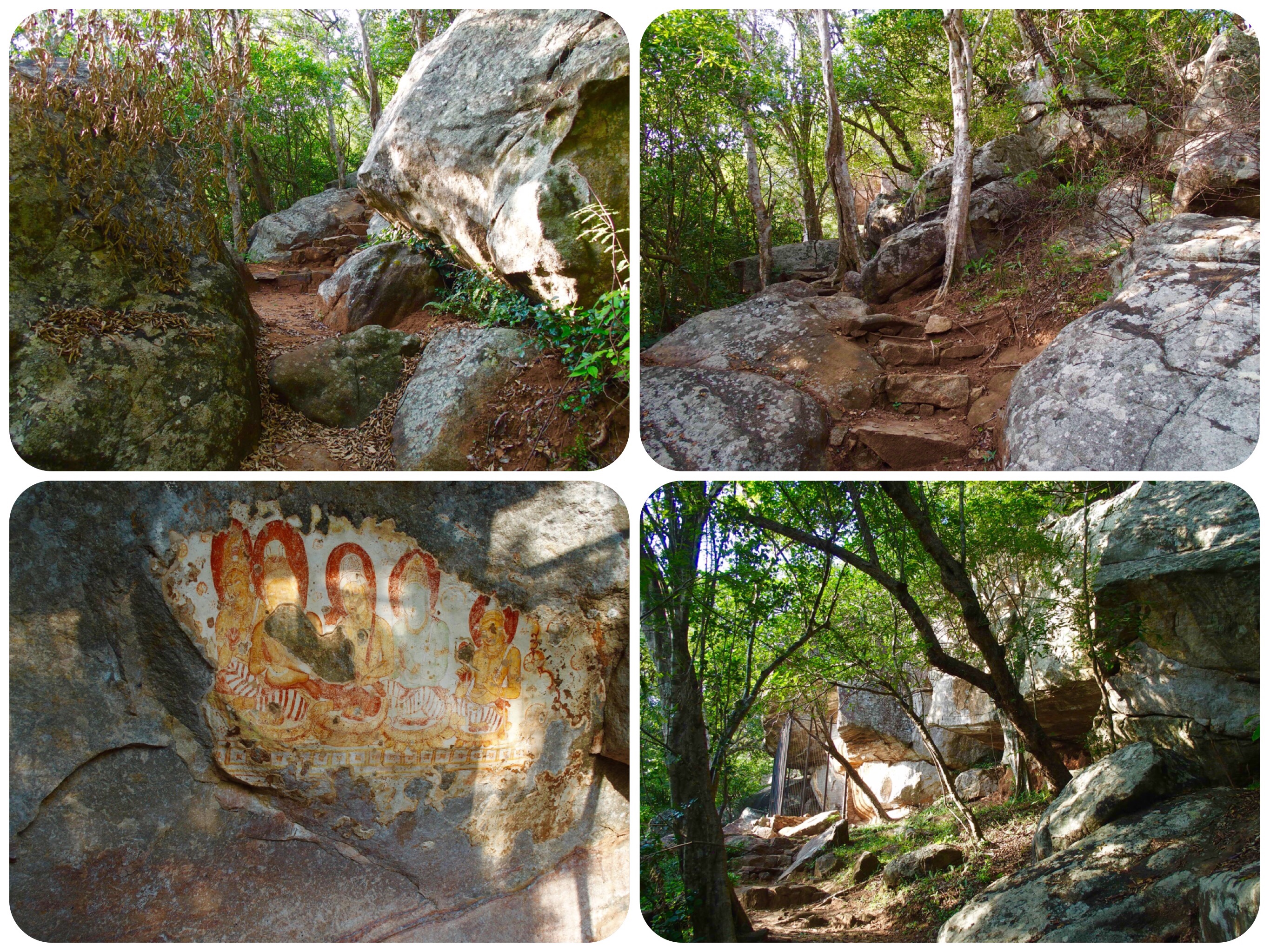 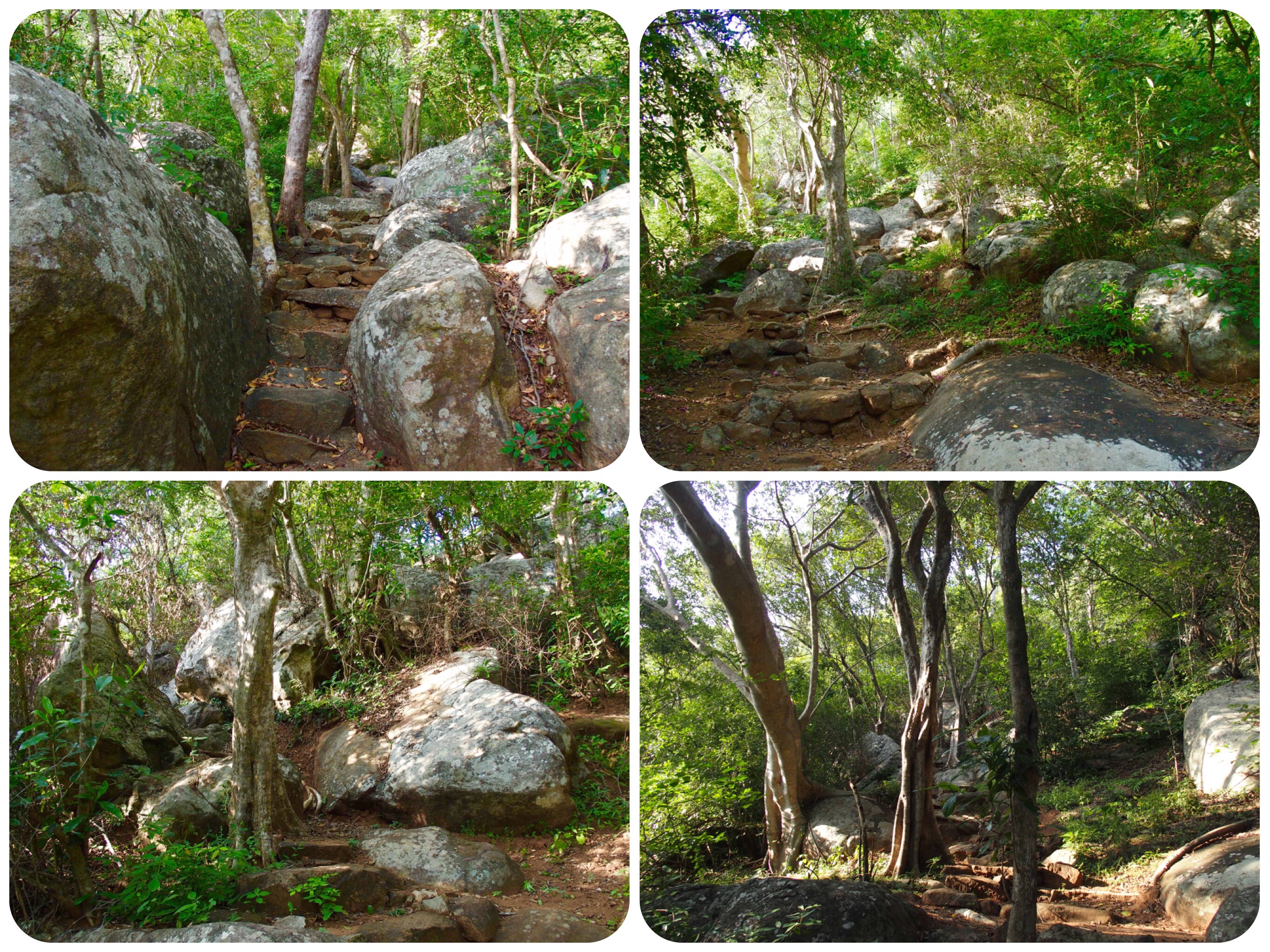 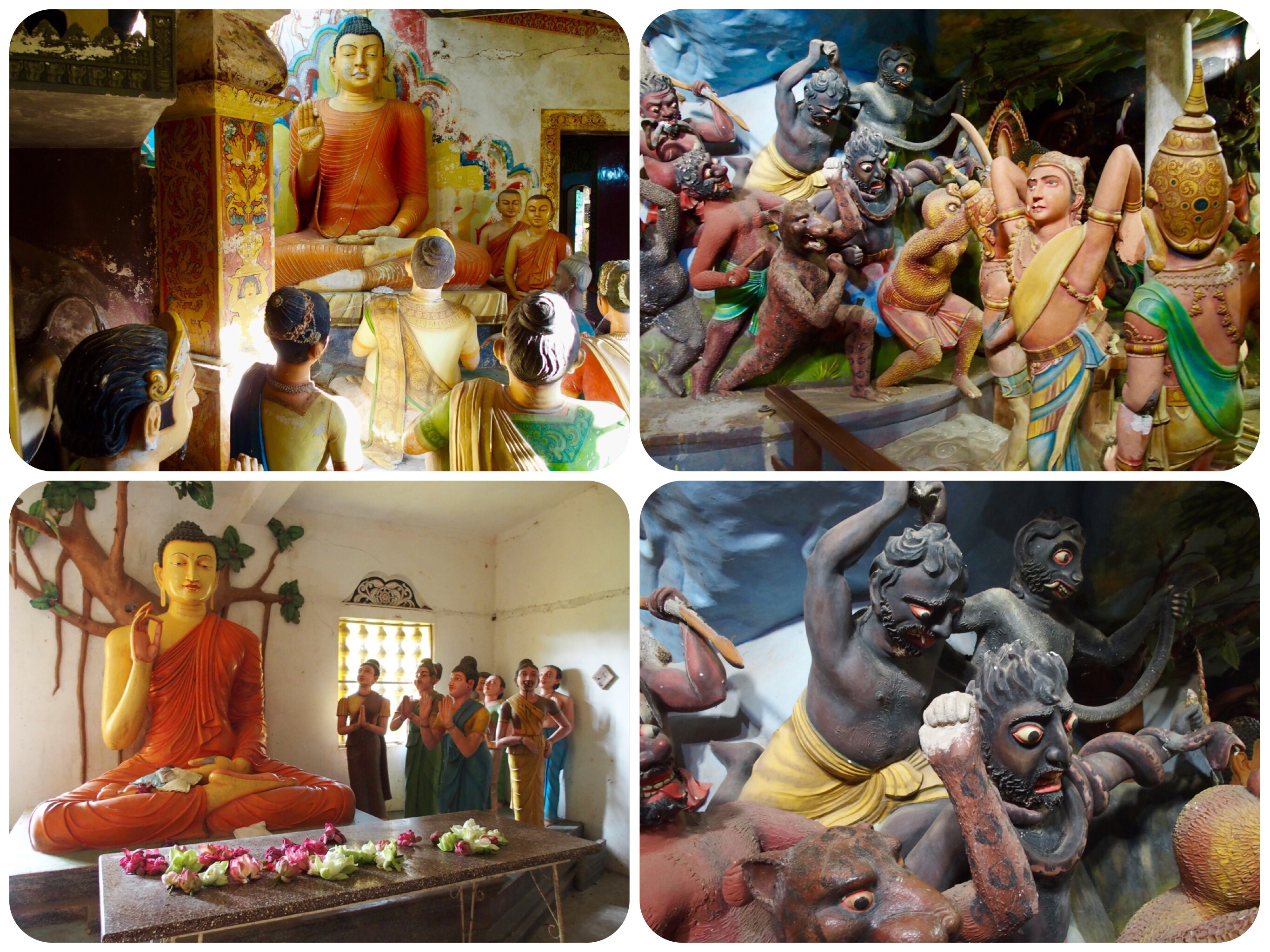 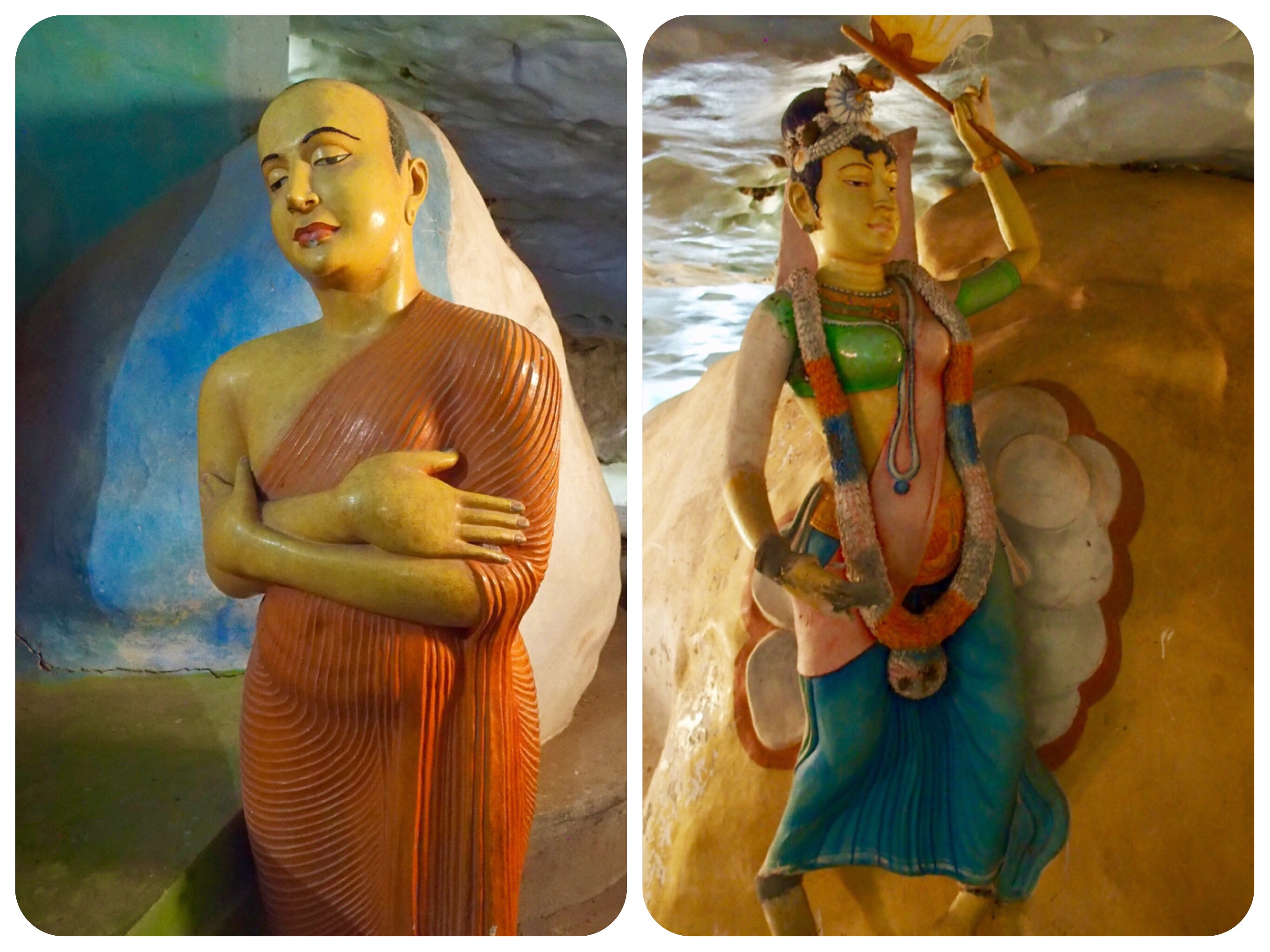 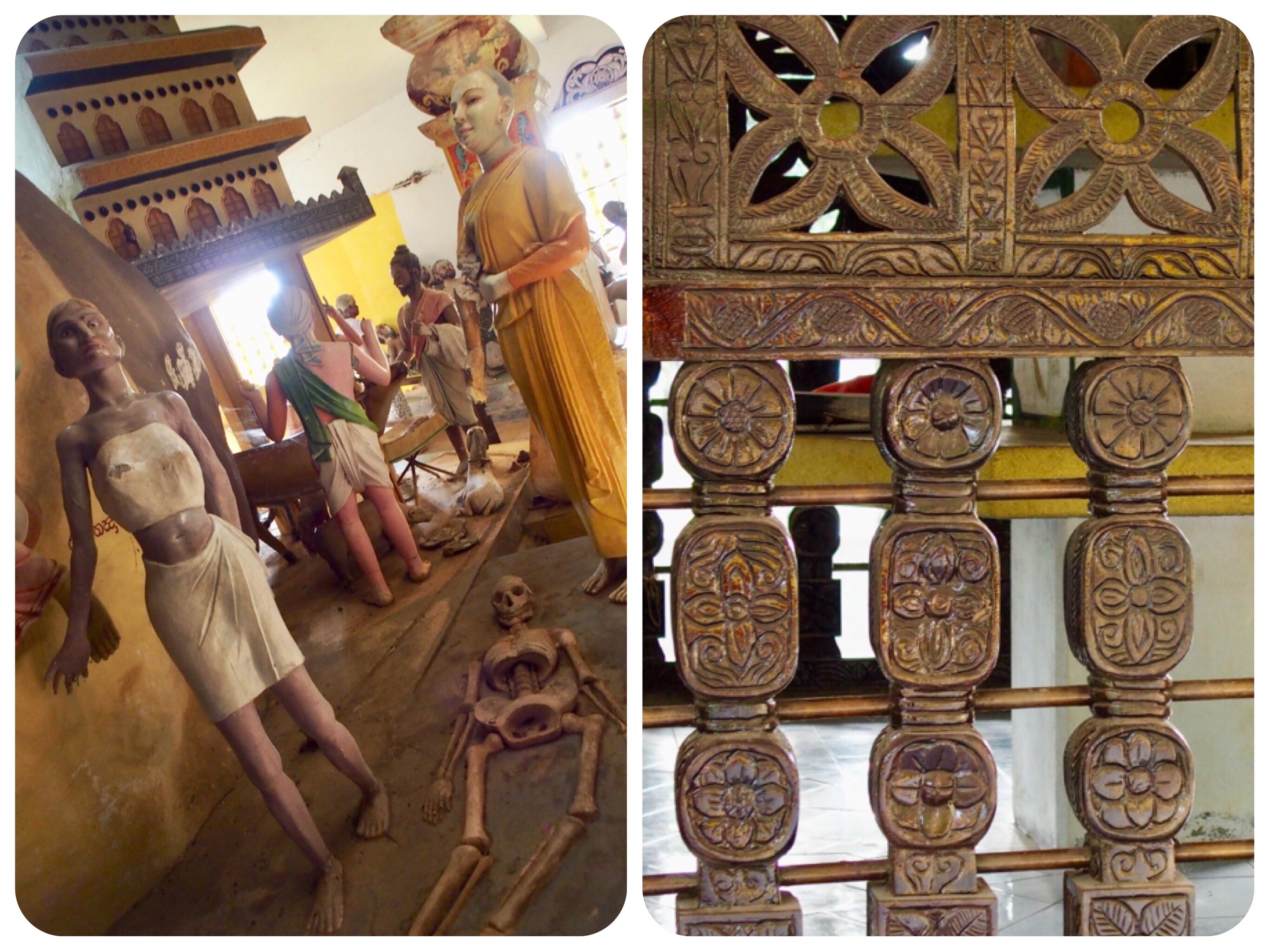 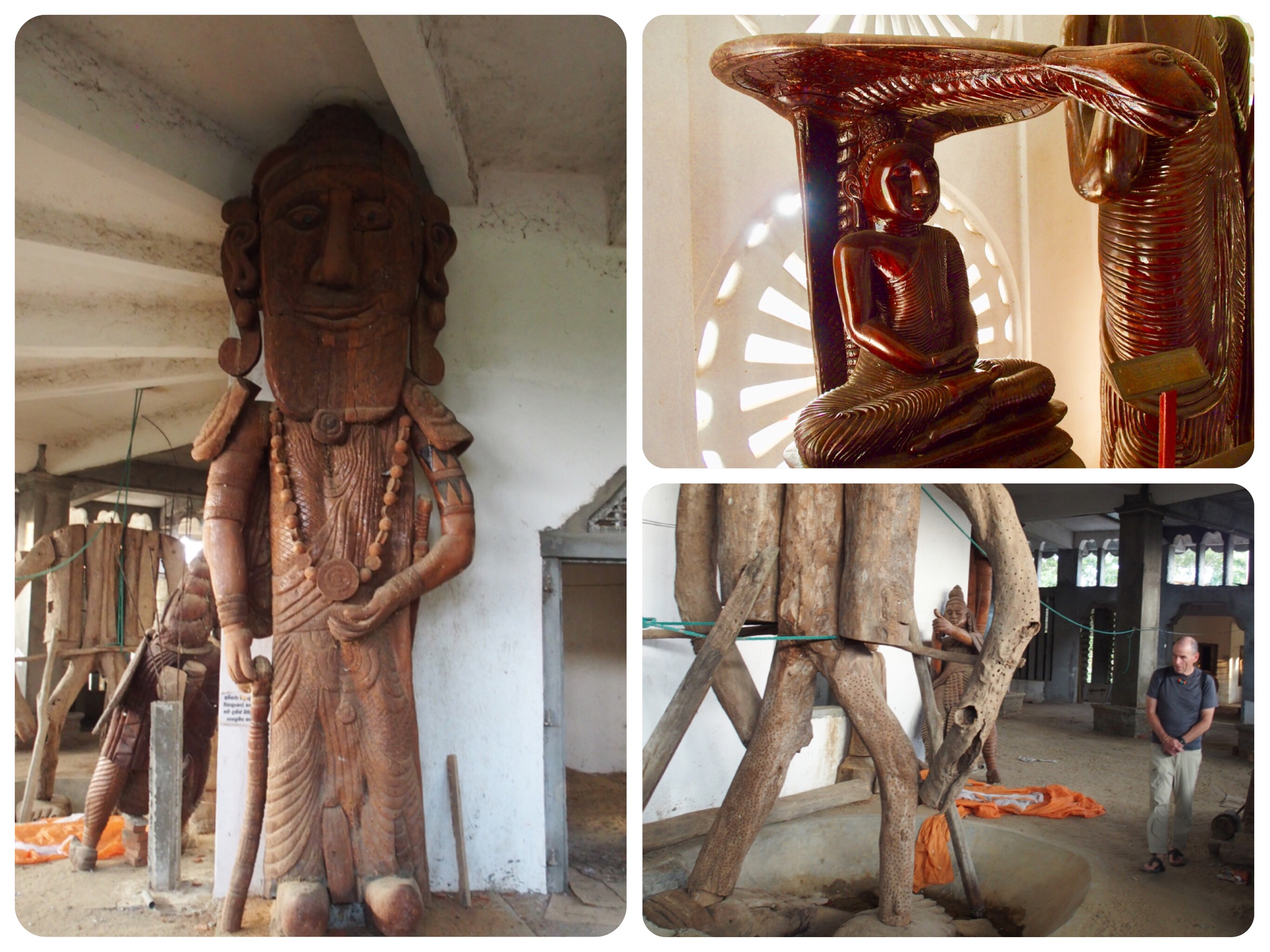 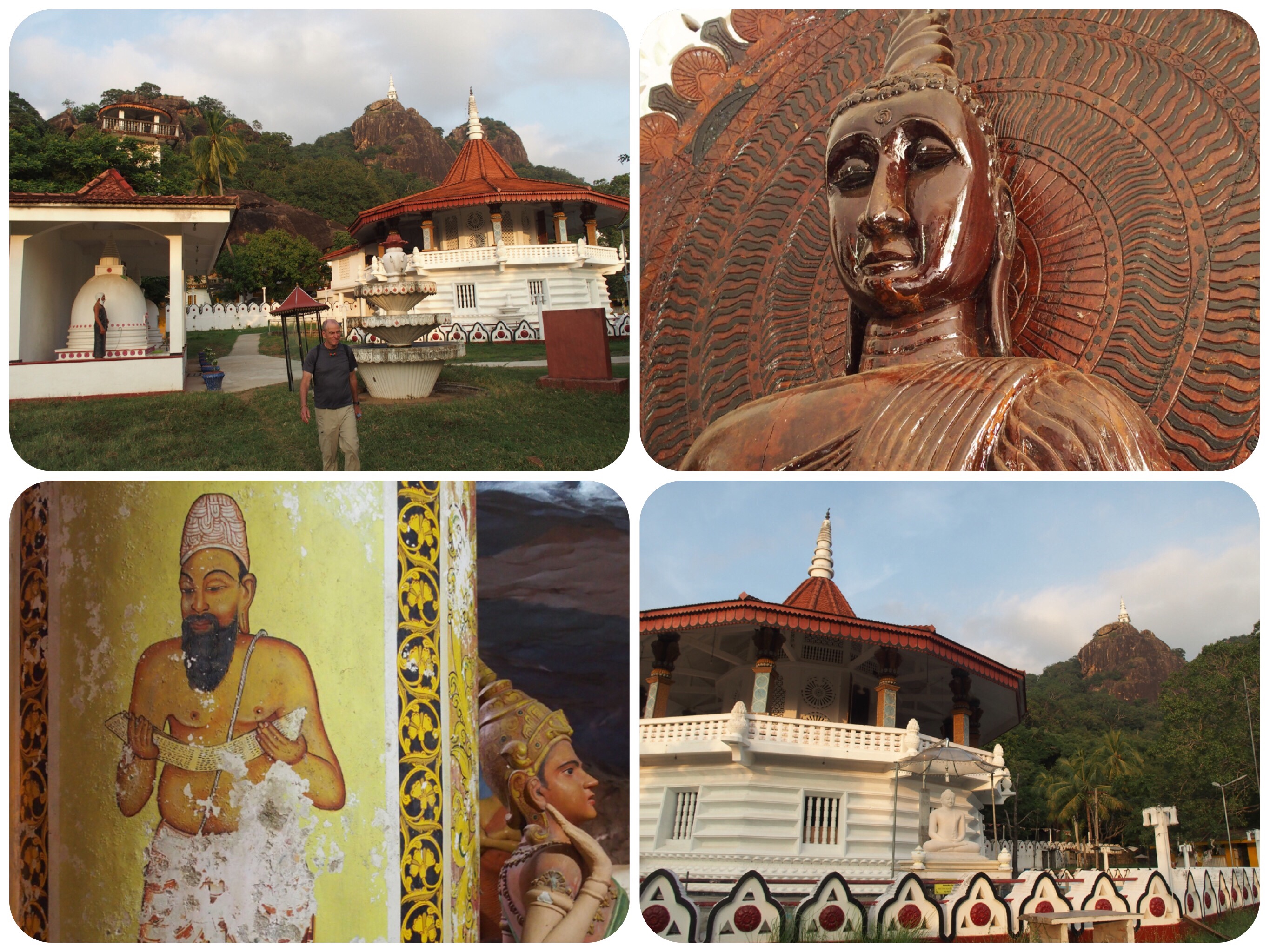 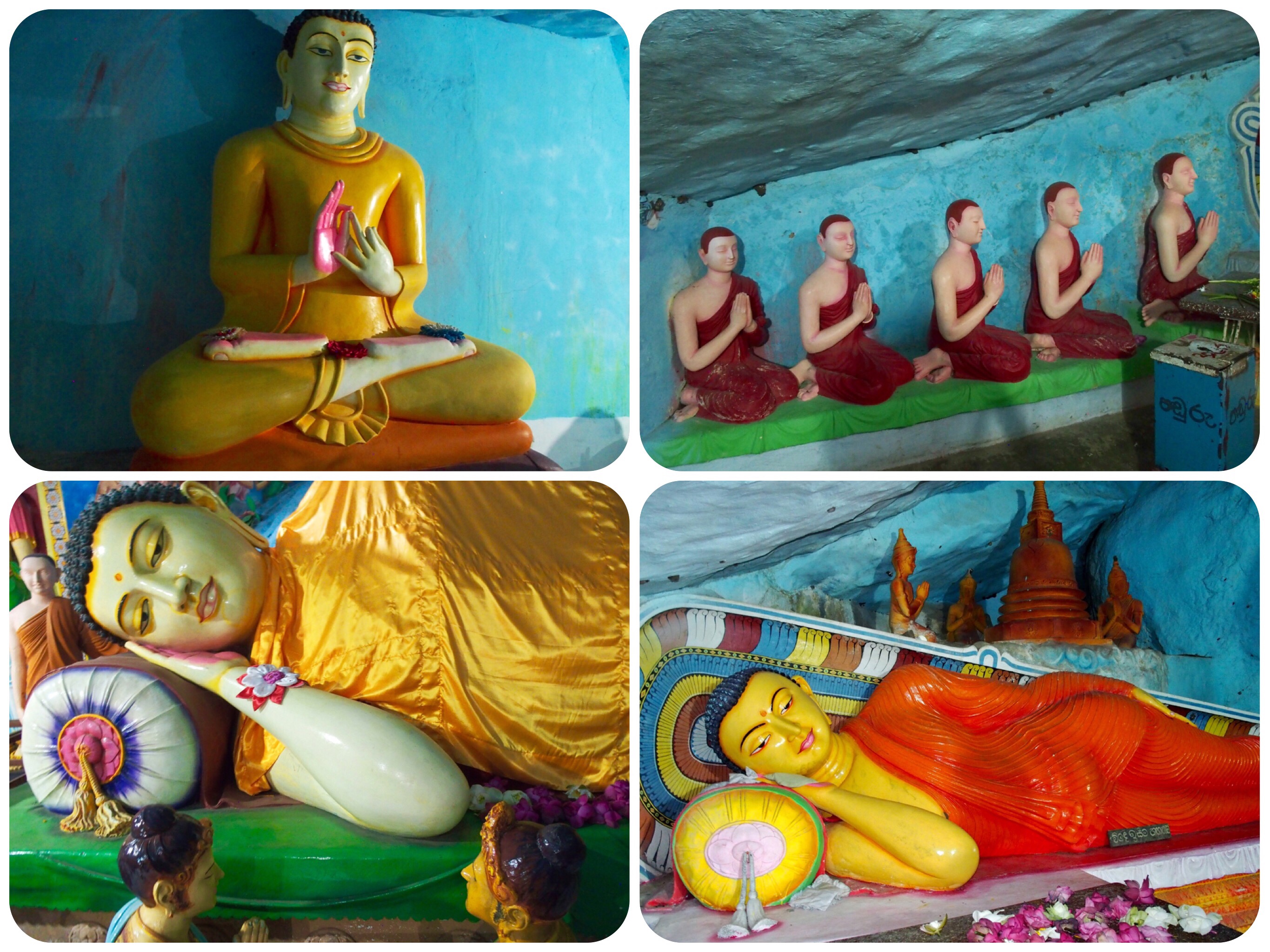 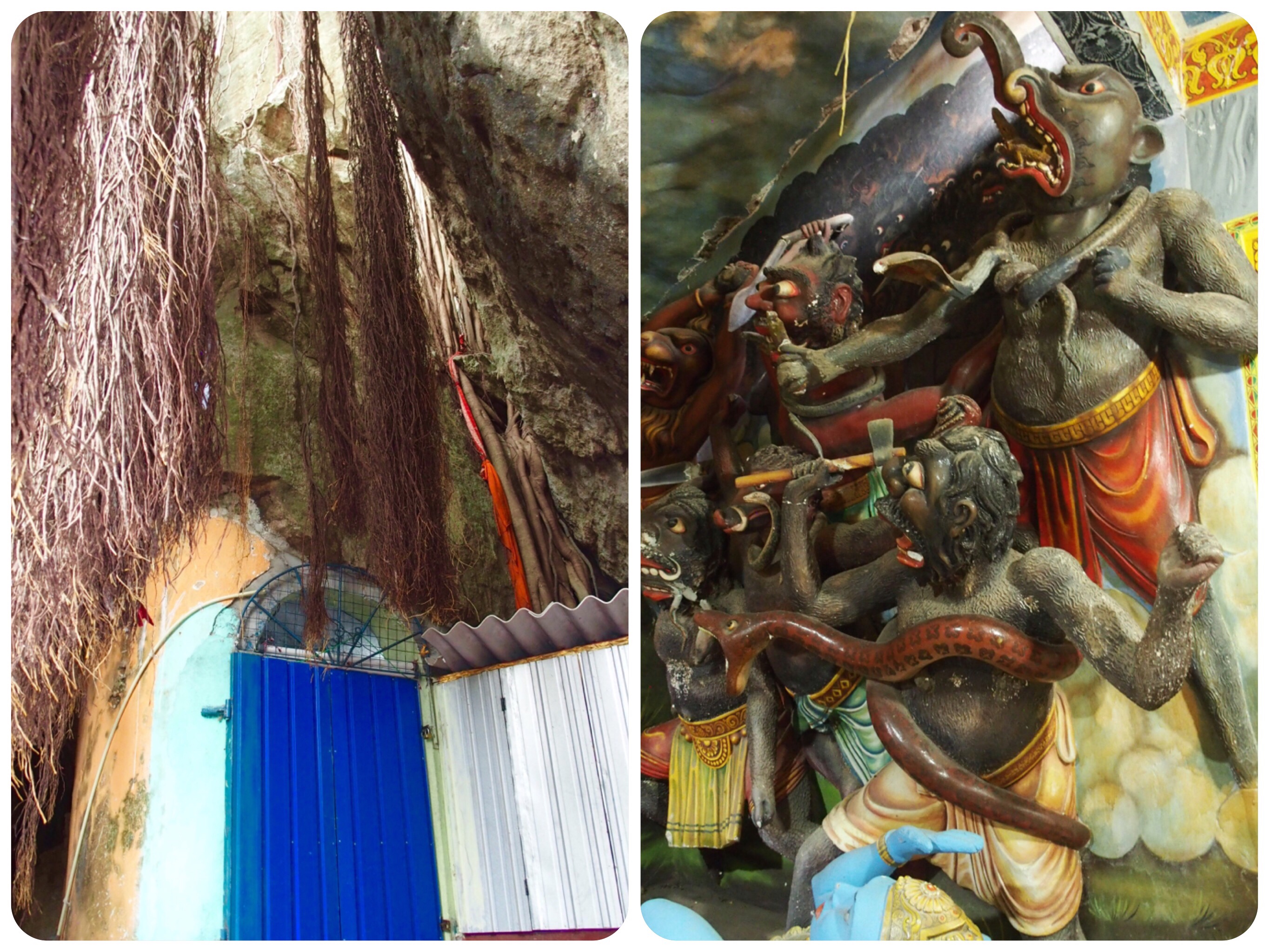 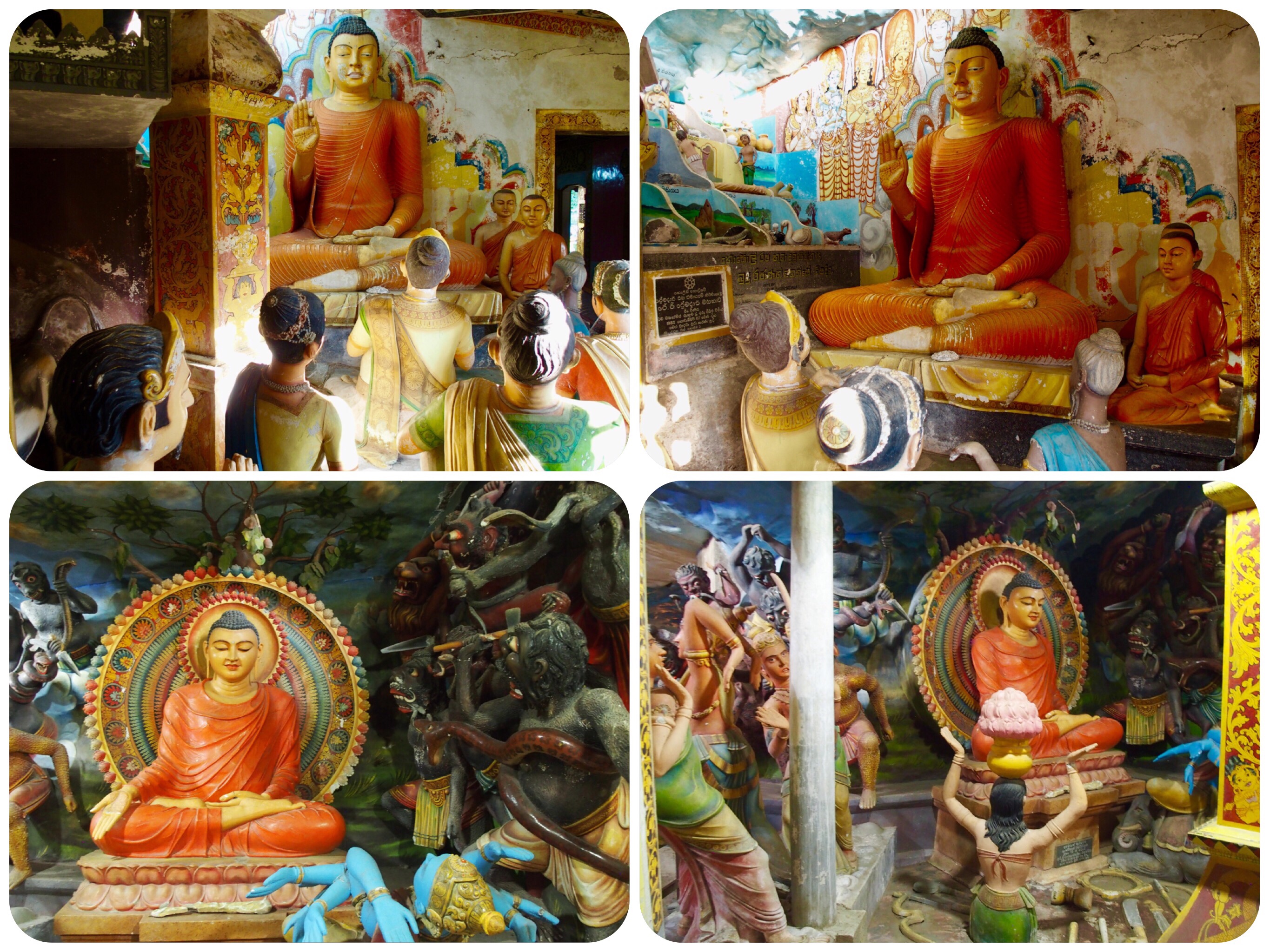 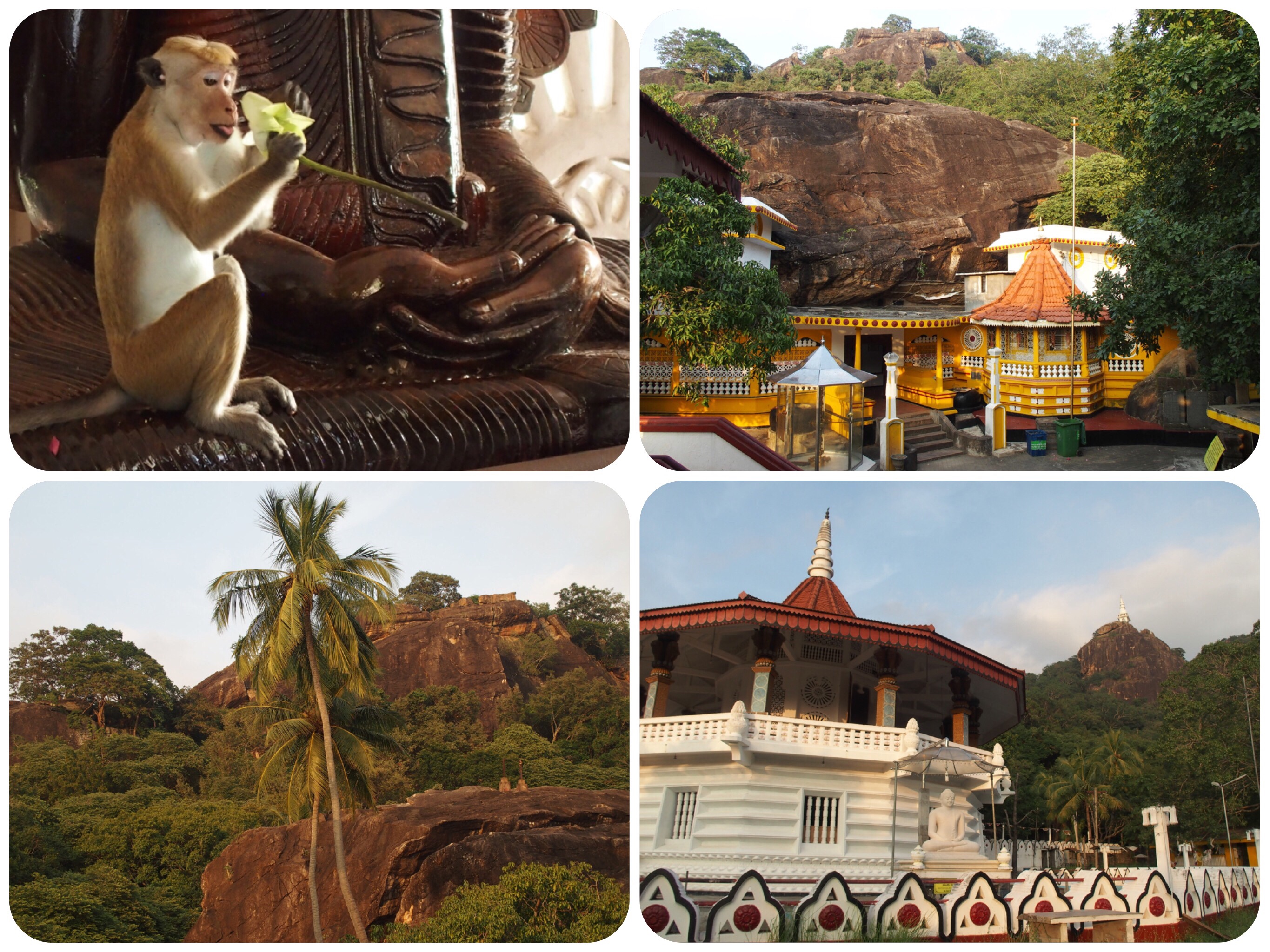 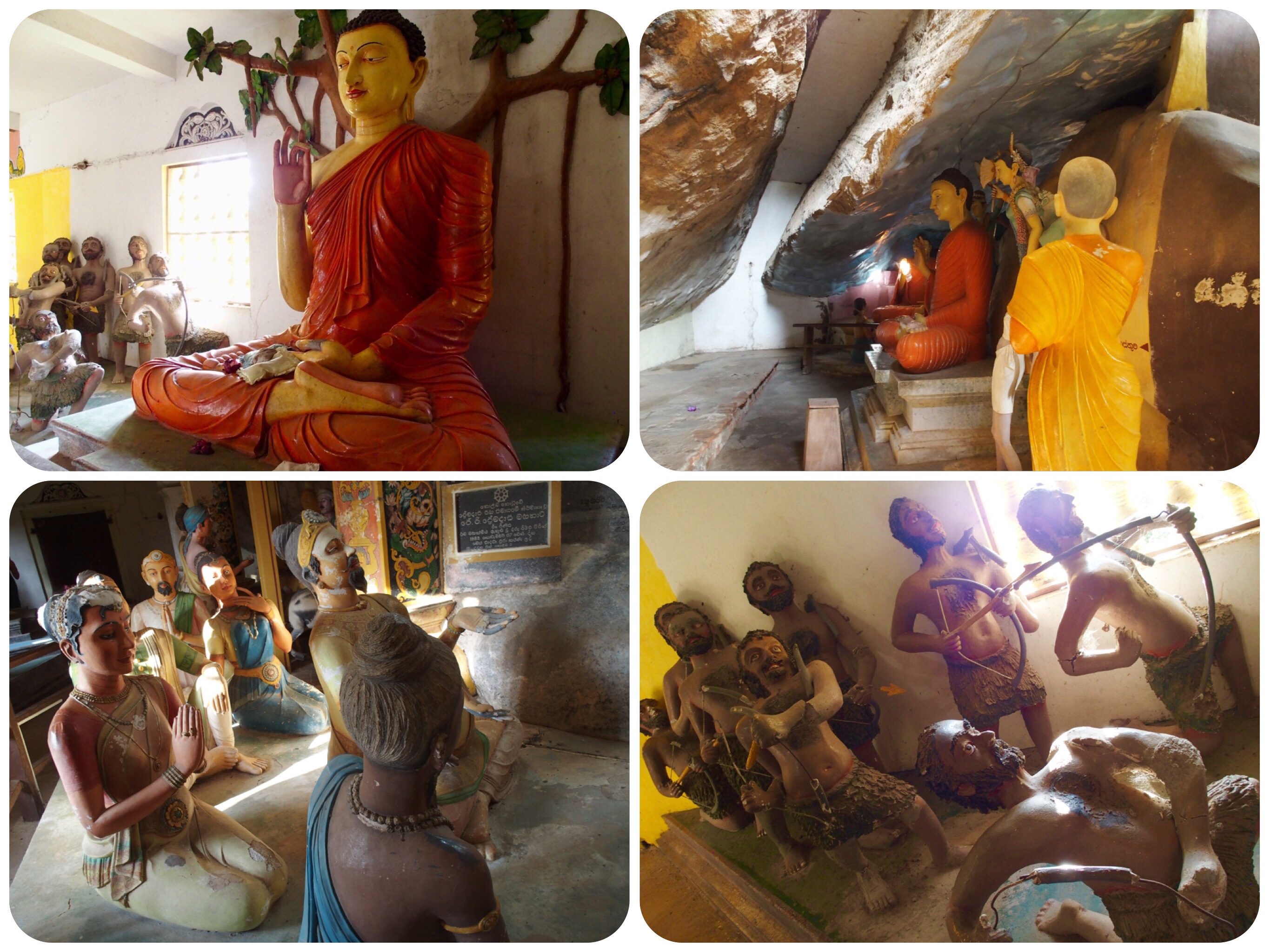 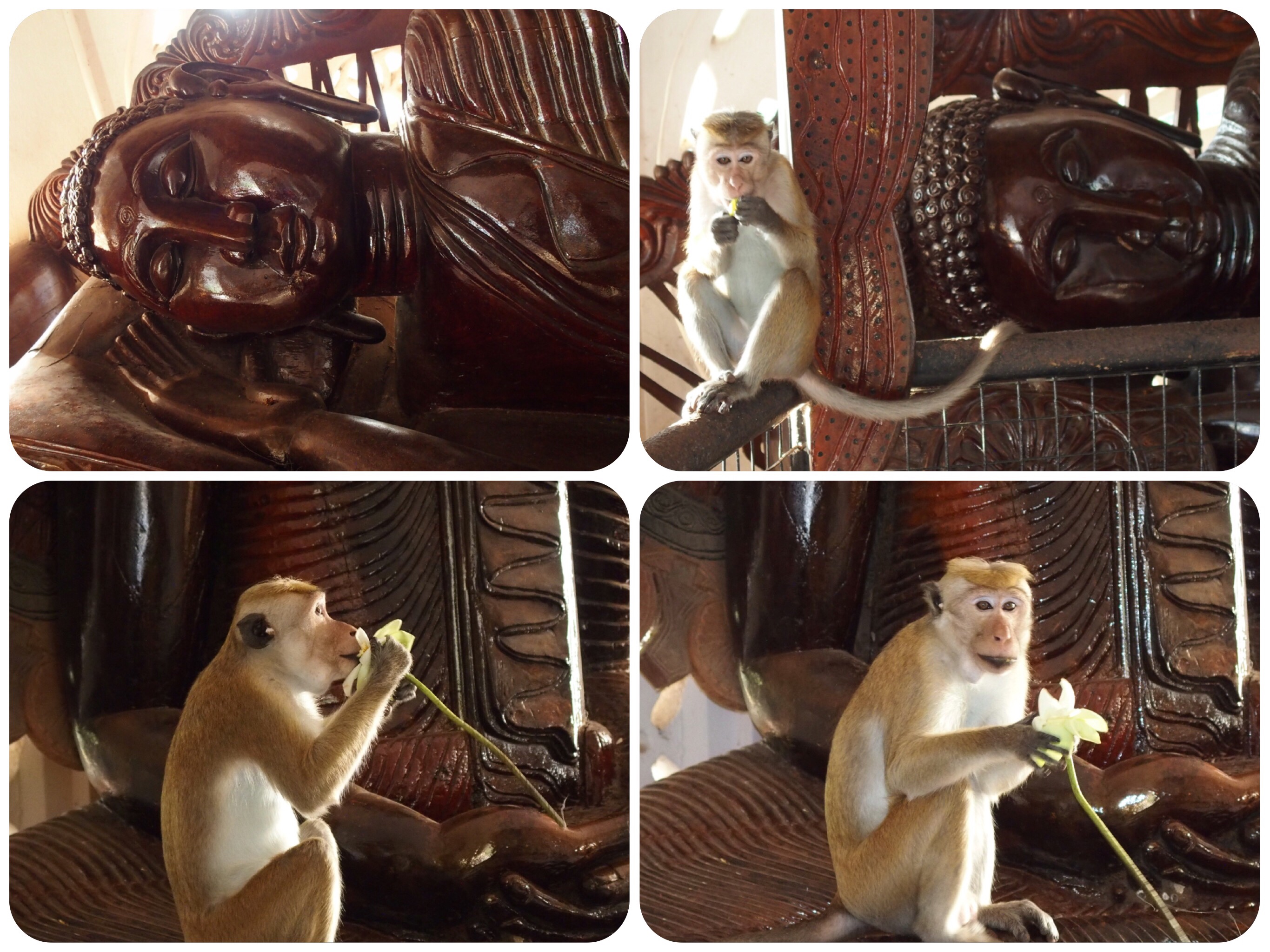 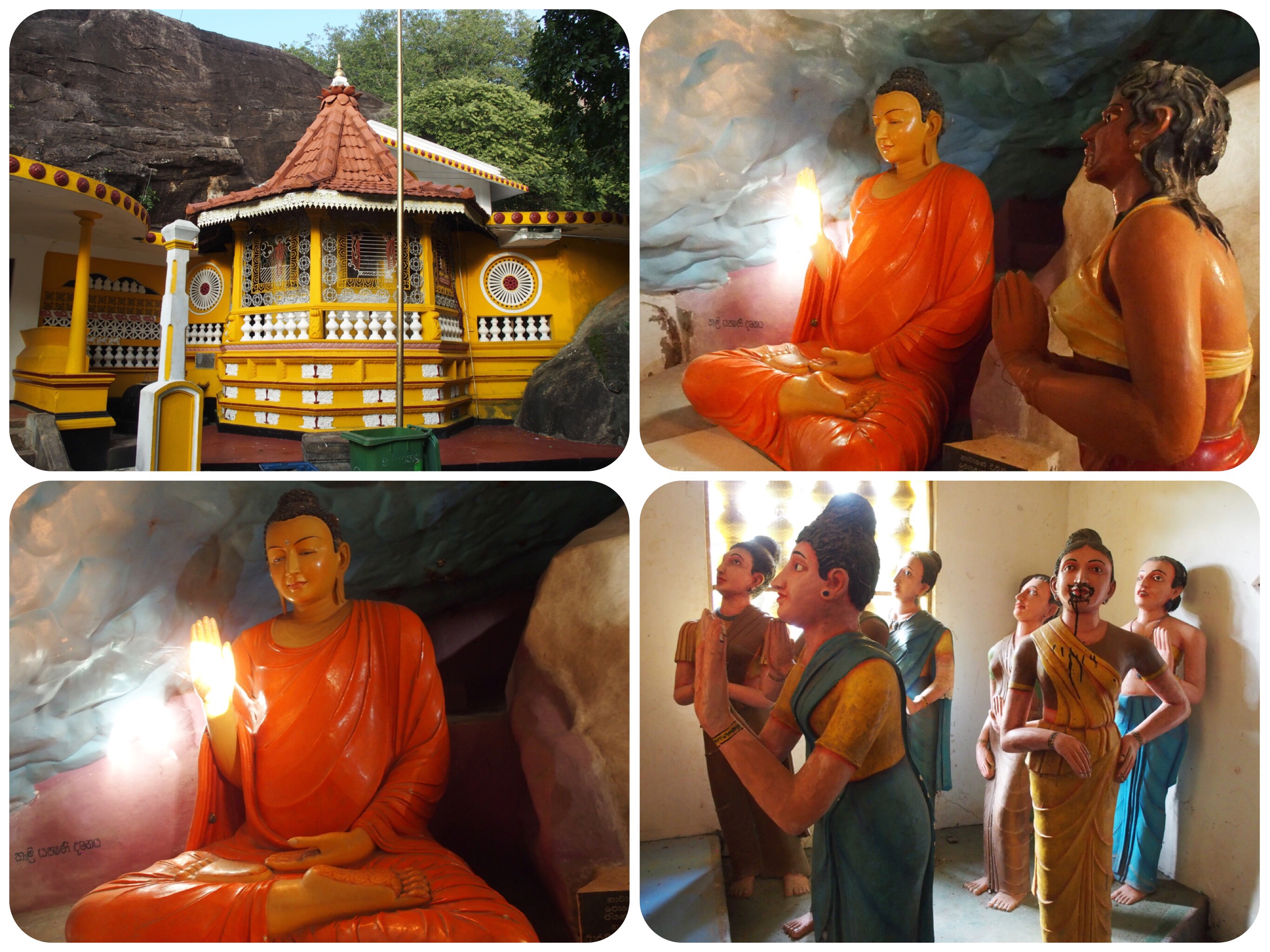 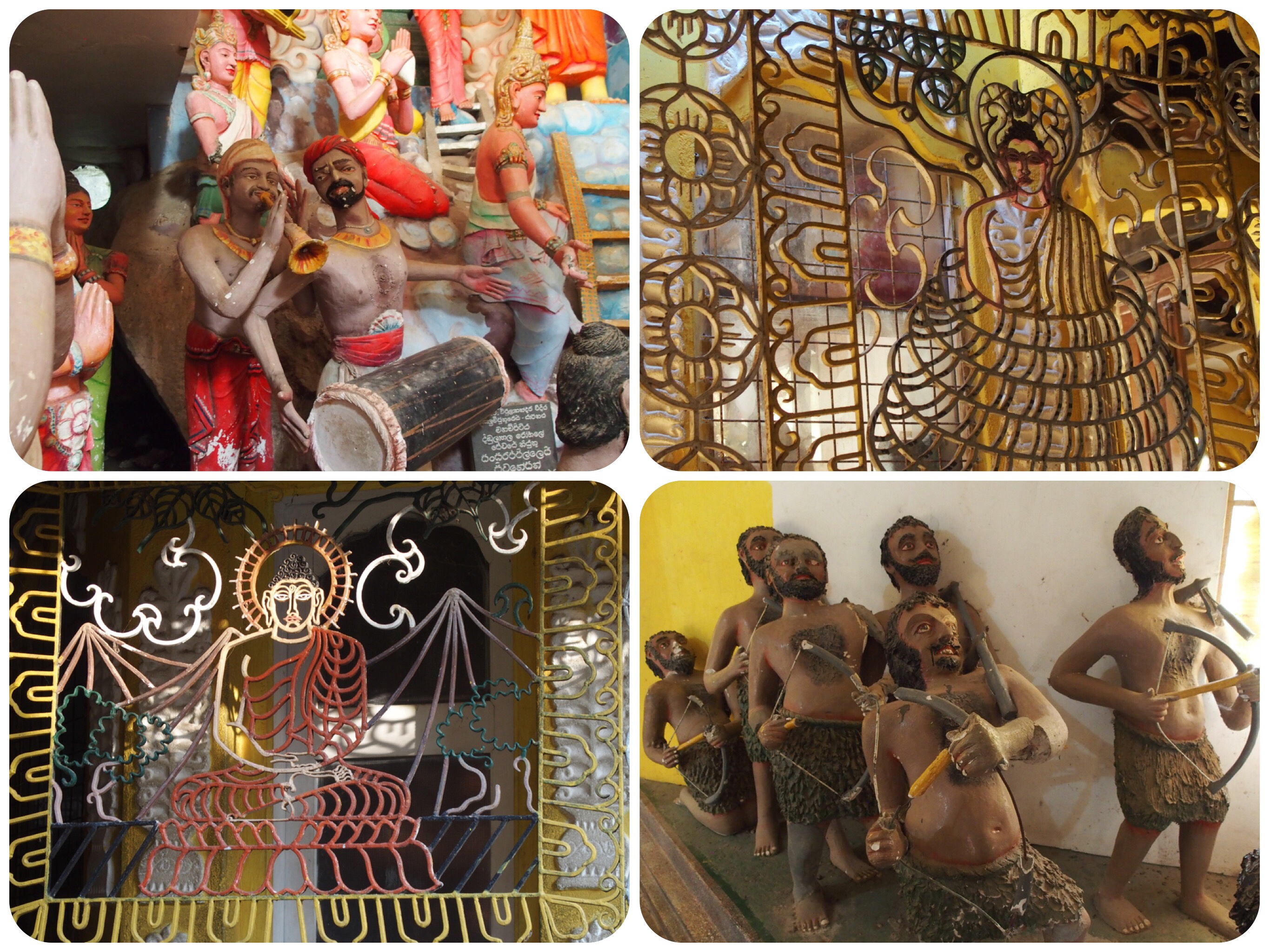 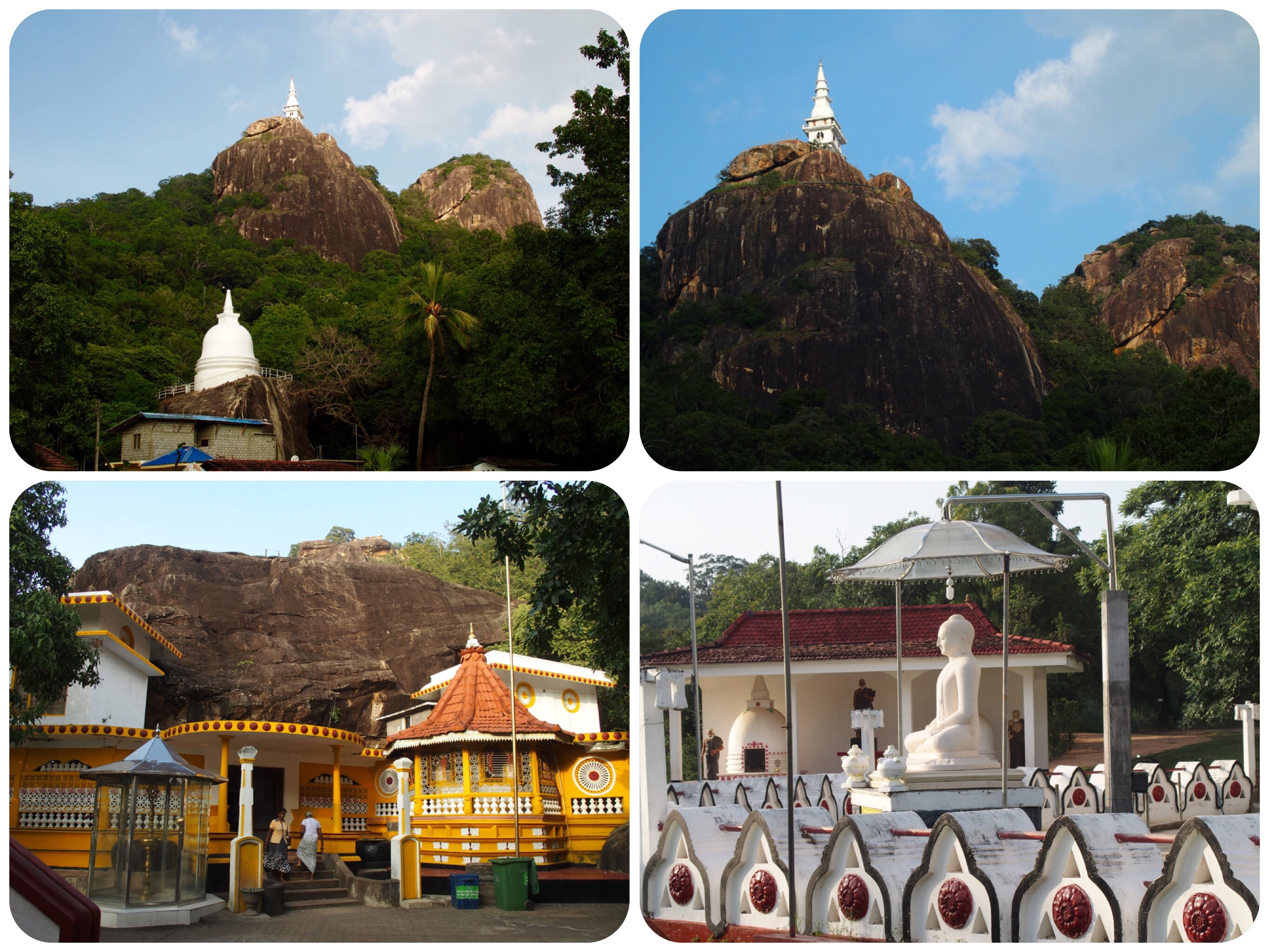 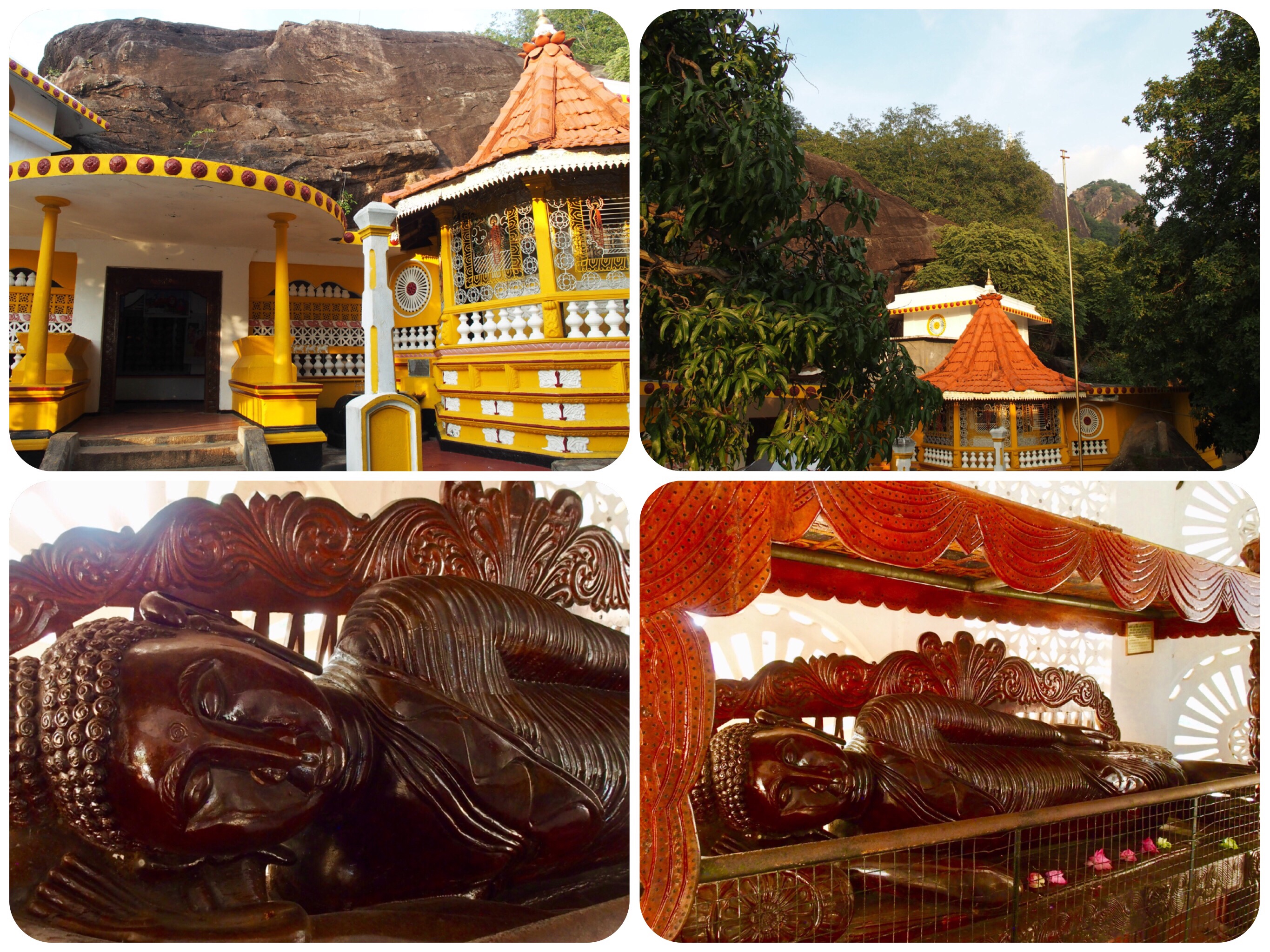 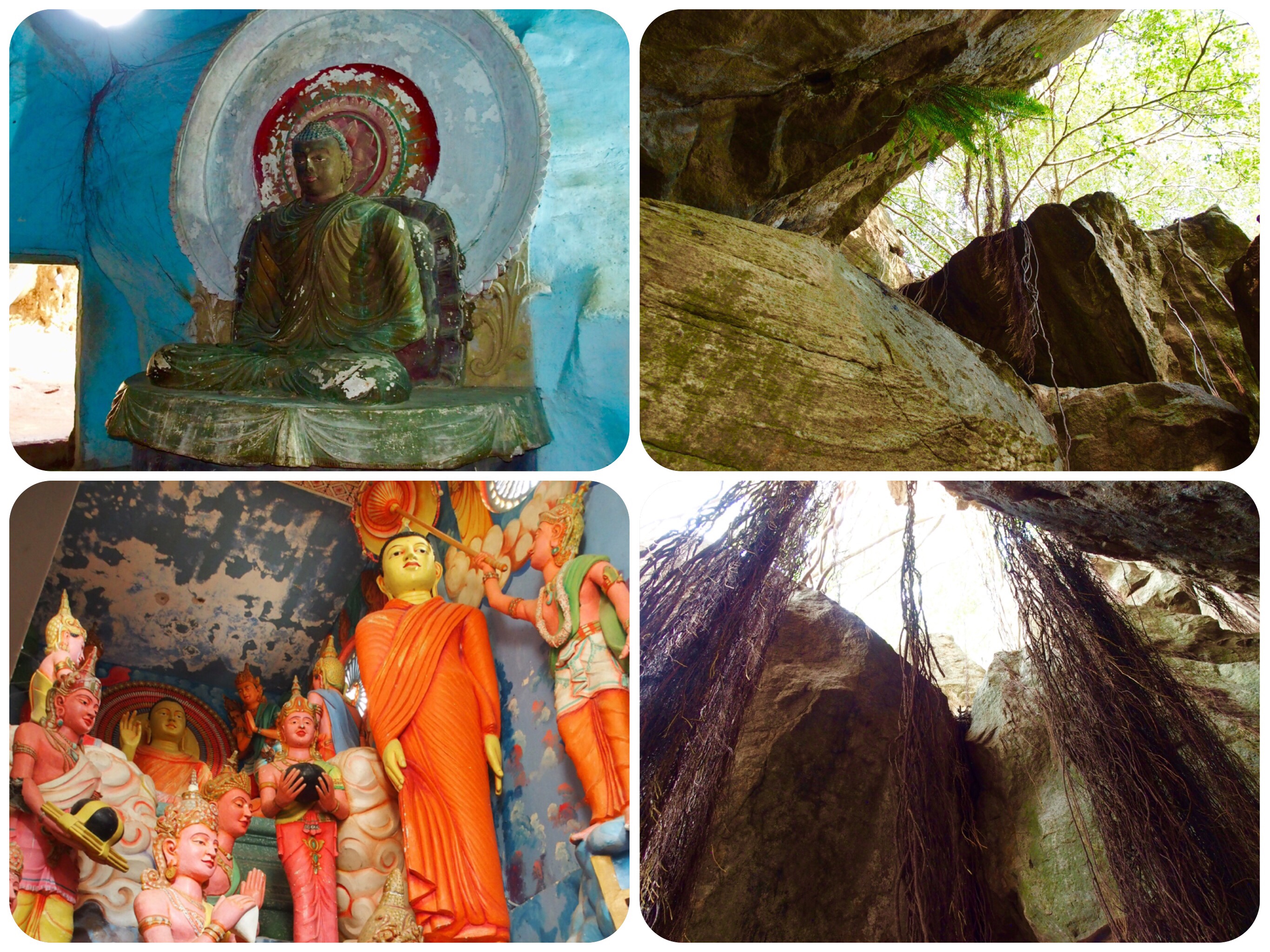 Dimbulagala is located just a short distance from Polonnaruwa, but it does not get many foreign visitors.

But there are two great reasons to visit Dimbulagala.
The first one is an ancient meditation cave with rock frescoes of Bodhisattvas on the ceiling.

A Bodhisattva is the Sanskrit term for a person who has great compassion, and has generated Bodhicitta, which is liberation from illusions, and possession of a light filled mind united with the Universal God.
A Bodhisattva is able to attain Buddhahood for the benefit of all sentient beings.

The Dimbulagala cave with its ancient paintings is called Pulligoda Rajamaha Viharaya.
You can see the old mural painting through the bars that were installed to protect the painting from damage.

The cave is a short hike up a steep, boulder strewn path.
Above the cave, there is part of a much larger rock cliff, with a nice lake below it.
There are other meditation caves along this vast rock, and even a stupa perched peacefully on top of the rock.

If you have time, please make sure to allow enough time to climb up to the top of the rock, to see the stupa and visit some of the meditation caves hidden in the rocks.

But if your time is short, make sure to visit Dimbulagala Raja Maha Viharaya cave temple.

It will take your breath away.
It is an ancient cave temple which is quite large, and inside the cave’s many natural rooms, the monks placed statues depicting stories from the life of the Buddha.
Thee are demons and village people, farmers and soldiers, deities and animals.

The whole thing looks amazing and feels a little like a ride in Disneyland.
I had to look up to the ceiling of the cave to remind myself that this was not a garish manmade creation, but a real ancient cave temple that has been elaborately designed to assist the locals to understand the teachings of the Buddha without words, but by using imagery.

And the locals do come here.
They dress in the all white outfits that are de rigeur in Sri Lanka when locals visit Buddhist temples.
They walked around the sculptures with their palms cupped together in supplication.
They Oohed and Wowed at the scenes that they recognized from the stories they had learned.

They also followed us closely, fascinated by our foreignness.
We seemed so exotic to them and they touched my arms as the ladies squeezed next to me.

The rooms meander up into the upper levels of the cave, where the devotees placed more lotus flowers and prayed.

The wood carvings were done by a single local monk.
They are large and expressive.
The Buddhas look very much like a local Sinhalese person.

Monkeys come into the open pavilion, to eat the lotus flowers that people bring as gifts to the Buddha.
They jump on the laps of the reclining or sitting Buddhas and they eat only the center of the flower, and then they throw the rest on the floor.

There is no entrance fee to visit this cave temple, but it is a good idea to make a small donation at the donation office.
It helps maintain the temple and supports the monks living there.

I am adding a Sri Lankan poem for you that explains the feeling of visiting these rural temples, so full of treasures and offering peace to a yearning heart:

“Ripe mangos hang from trees
Mellow plantains diffuse fragrance around
Scattered are the wild bananas in abundance
Amid all this sparkles the temple
Removing the fear of existence from the hearts of the people.

Ignorance, fear and envy,
Occupy the minds of the people
The learned to speak clever words
And the destitute forever seek their aid,
Such is the region where the temple is located.

When people gather from the four directions,
Piously holding flowers and other offerings in their hands,
O Swan, enter the temple at an auspicious time,
Like a lotus dropped from the sun.

Behold, my friend,
The temple is full of rare treasures,
Which always shine like the face of the Maiden Earth.
Gratify your eyes, mind and heart
As if enjoying a treat of milk and lotus nectar.”

I bow my head in gratitude and grace to your divinity,
Tali