Arankele Forest Monastery and The Ruins Of The Ancient City Of Yapahuwa, Sri Lanka 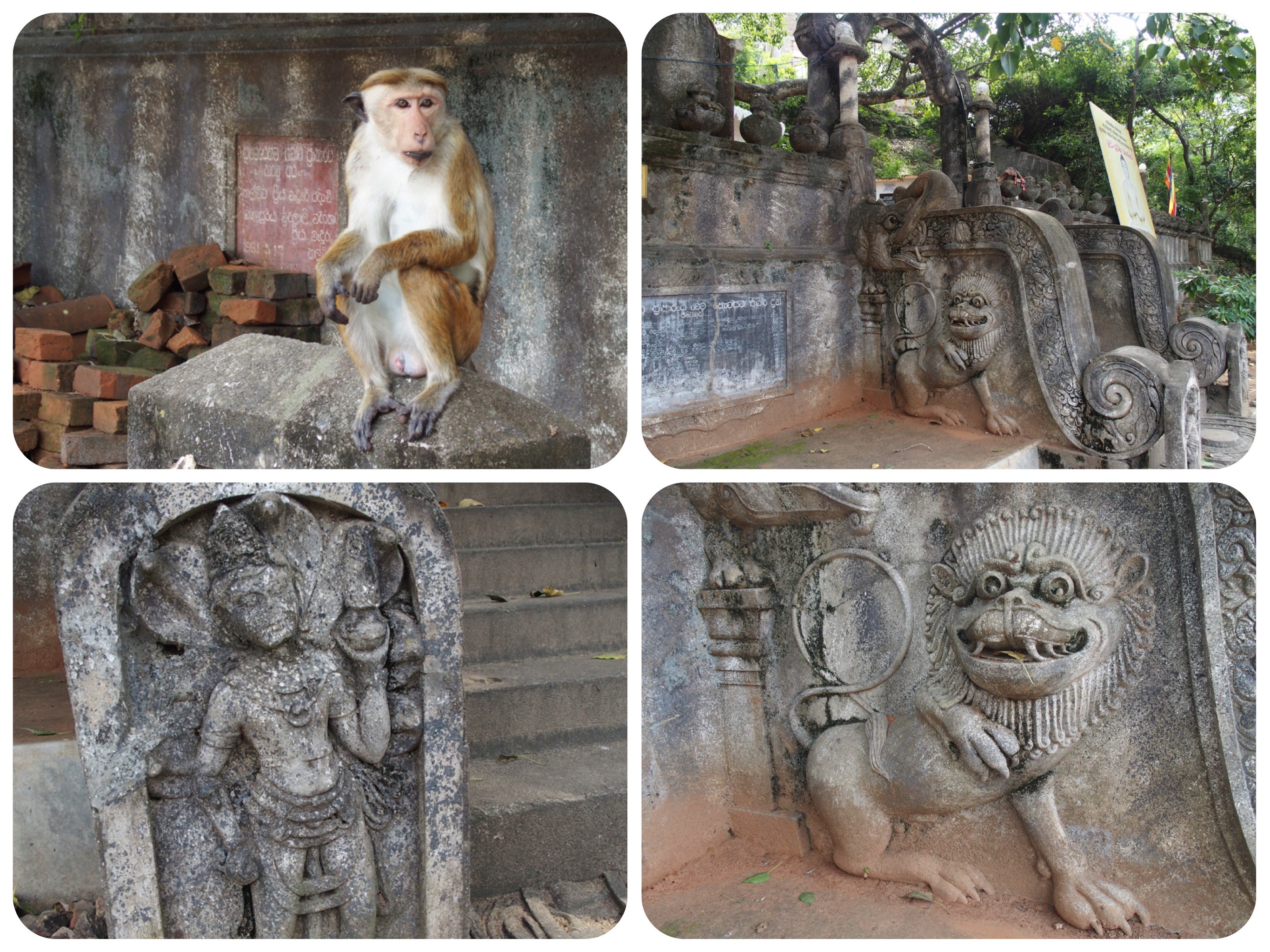 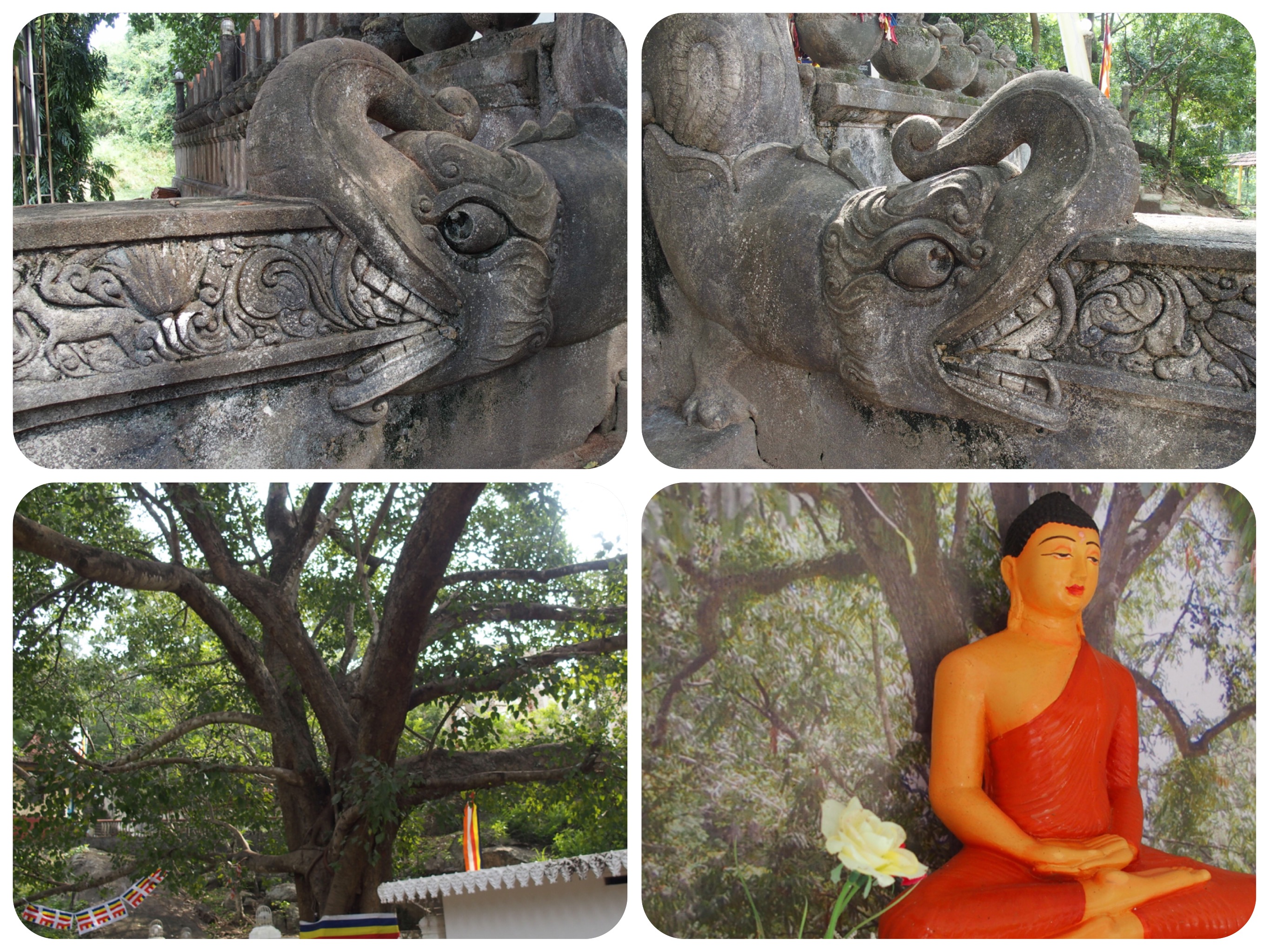 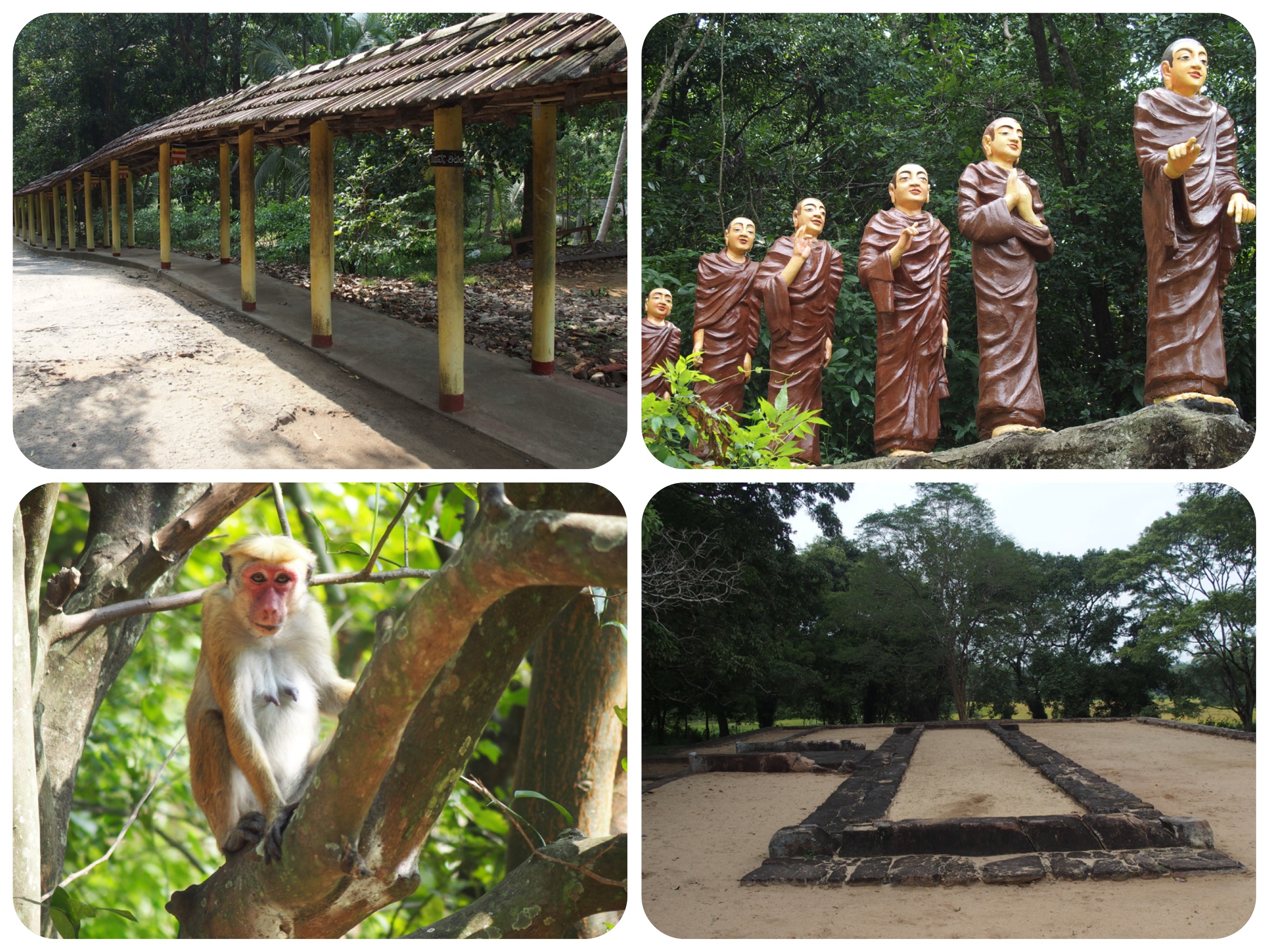 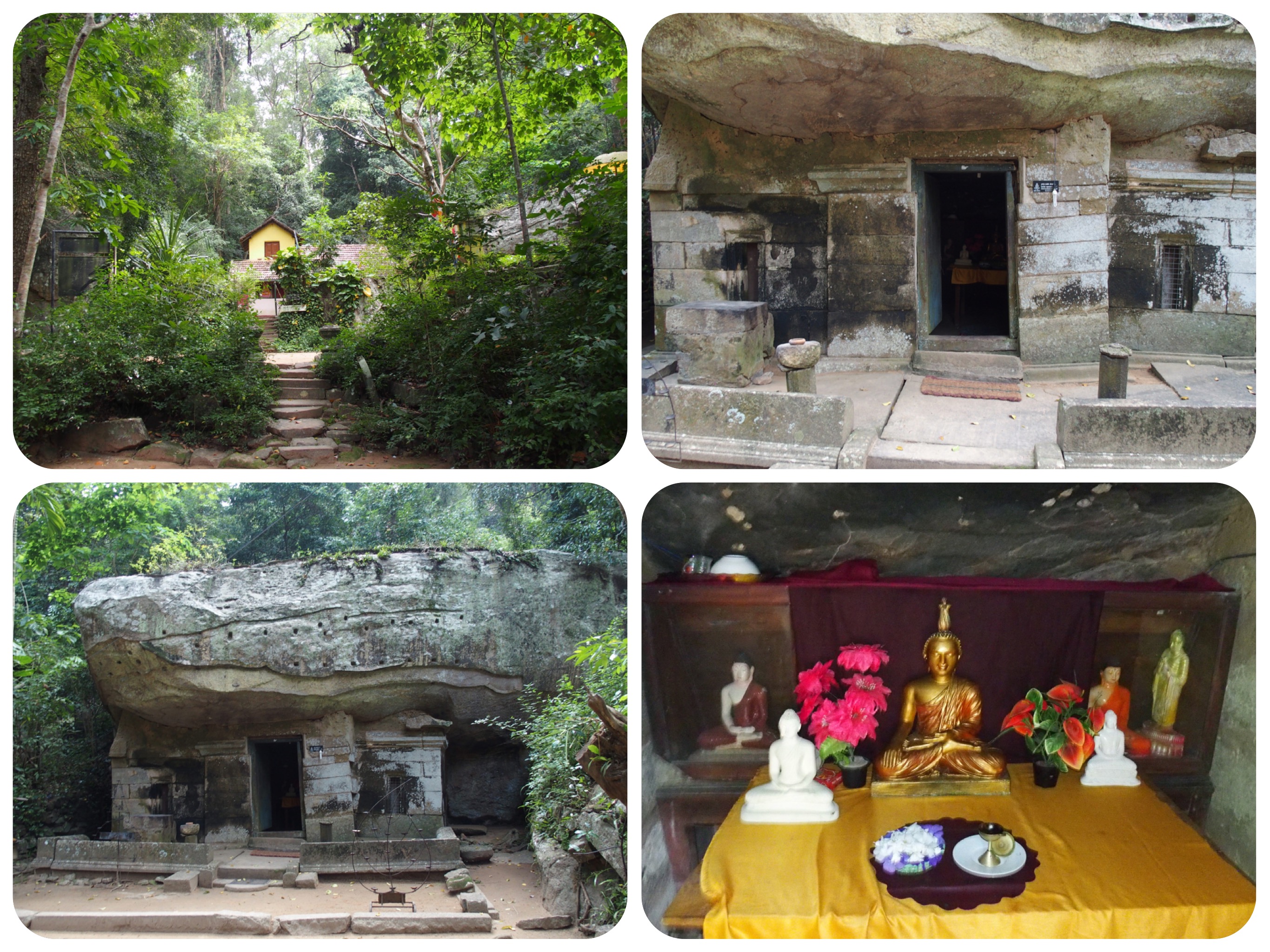 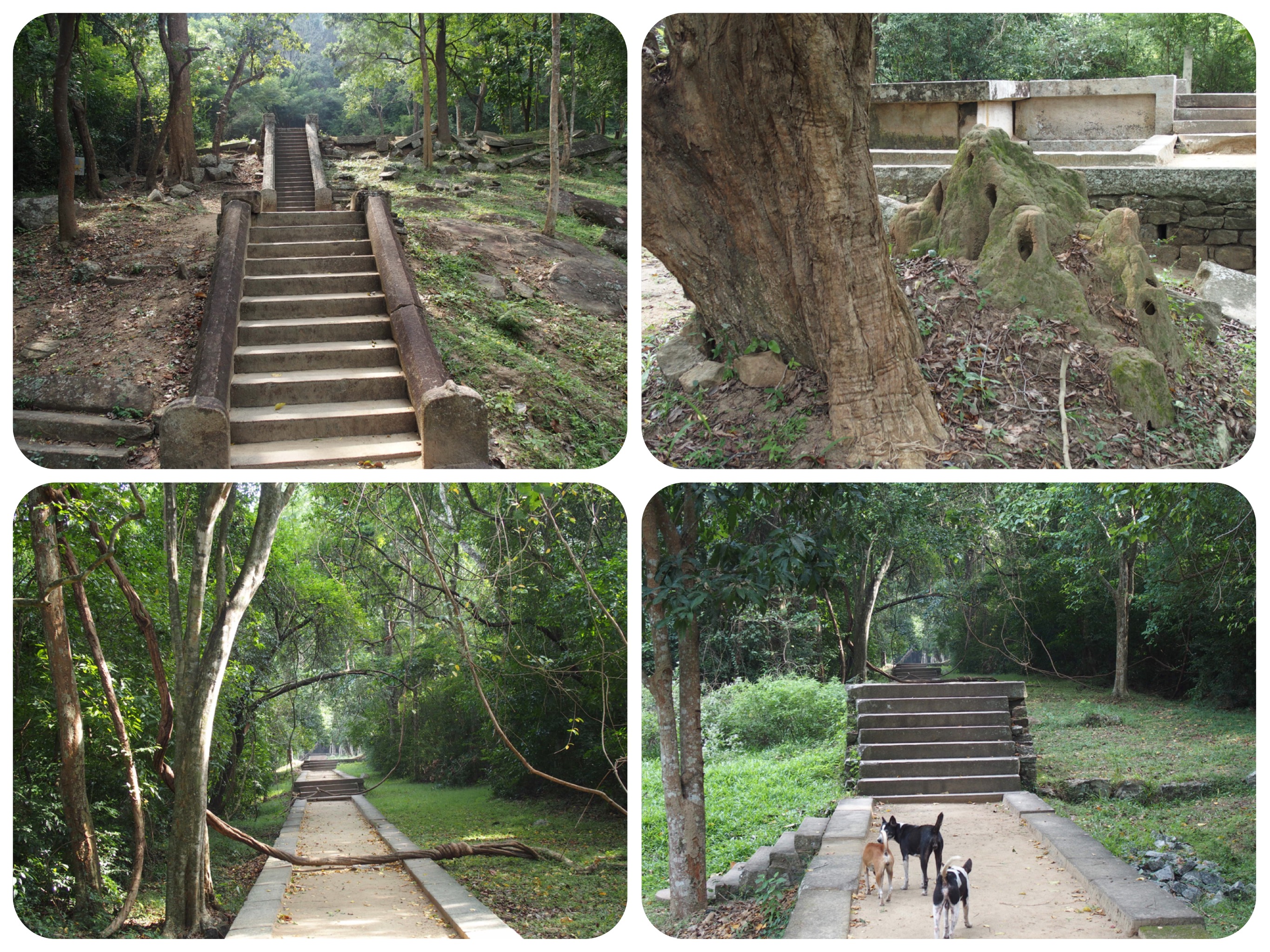 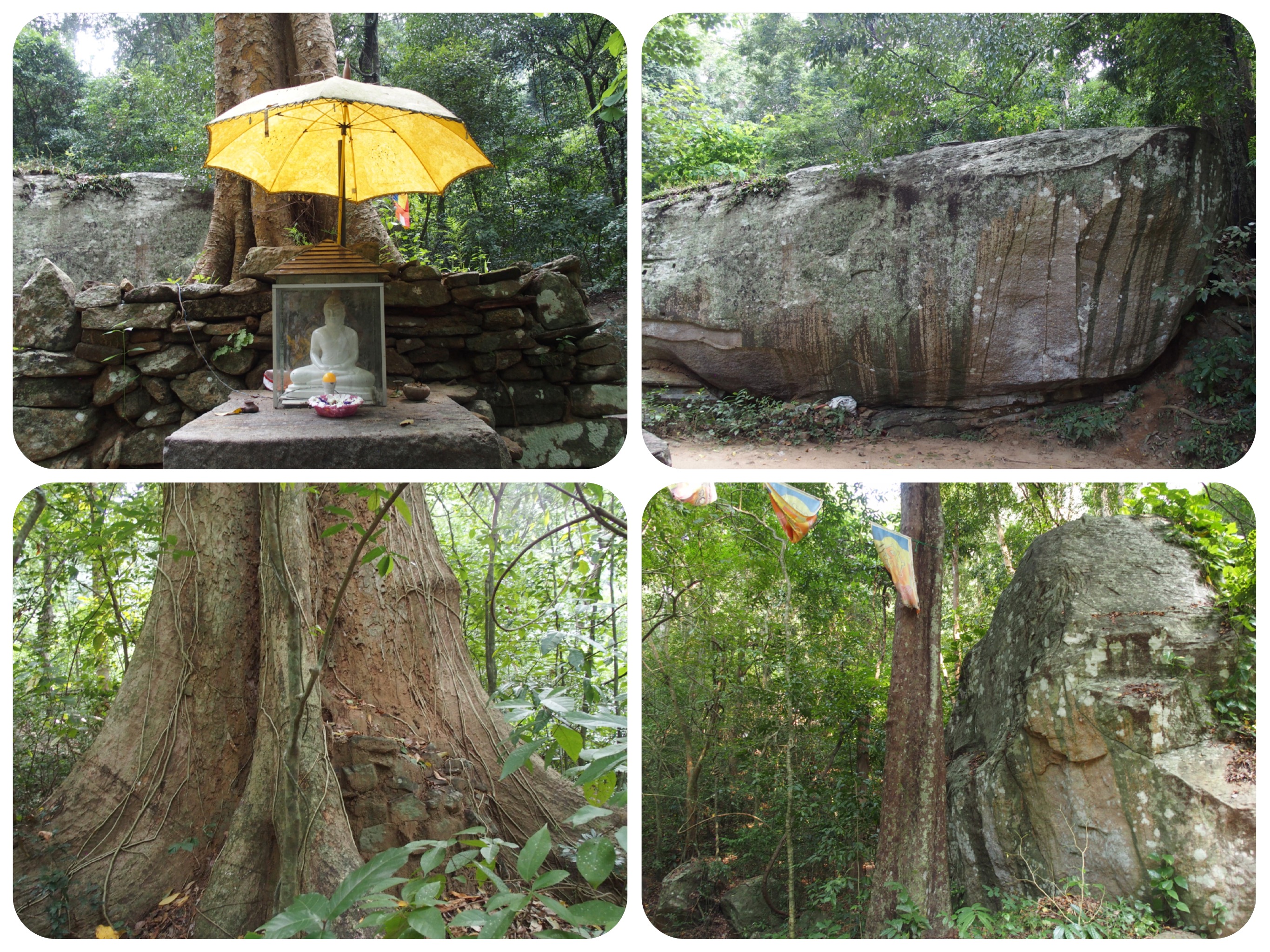 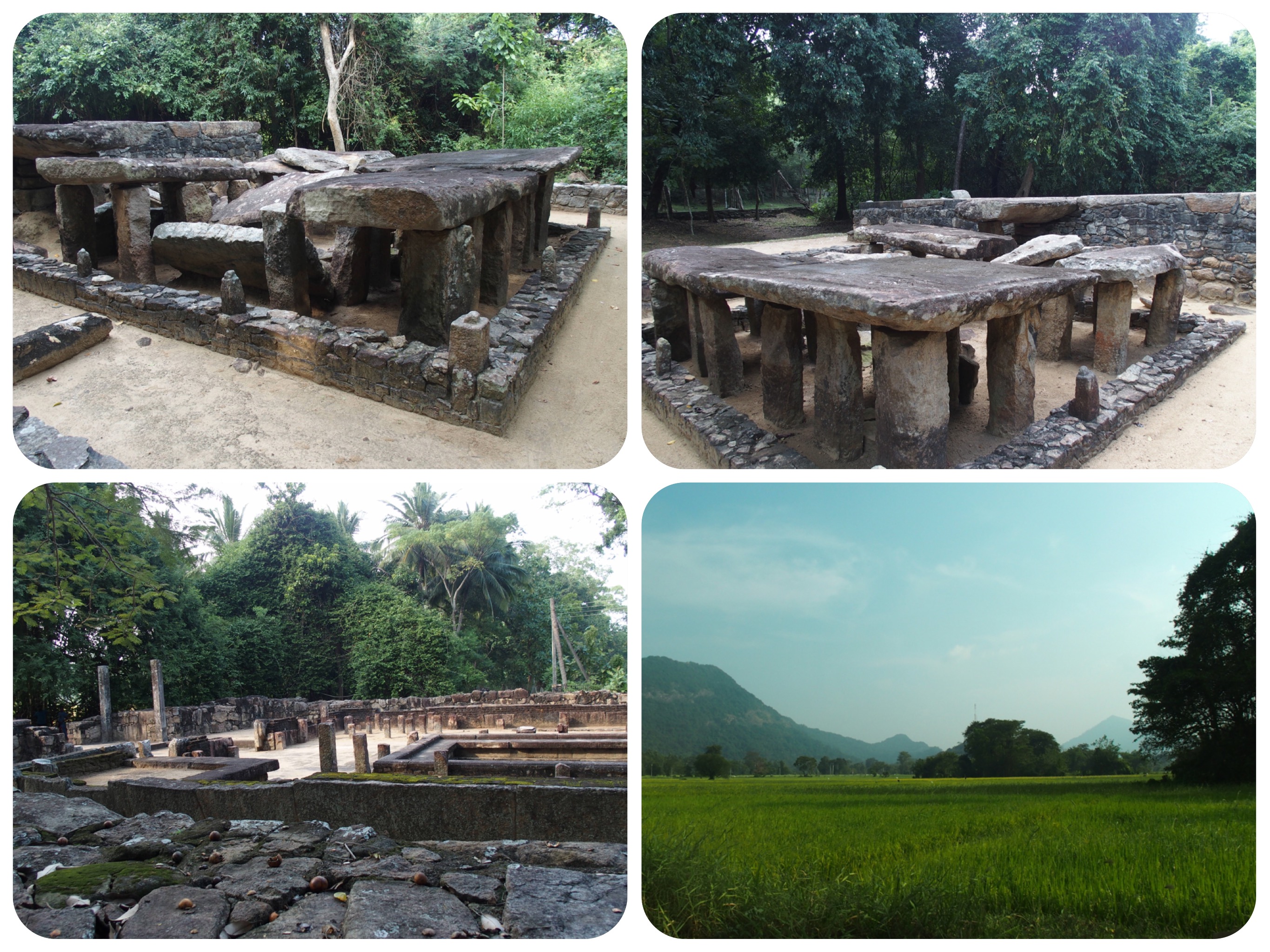 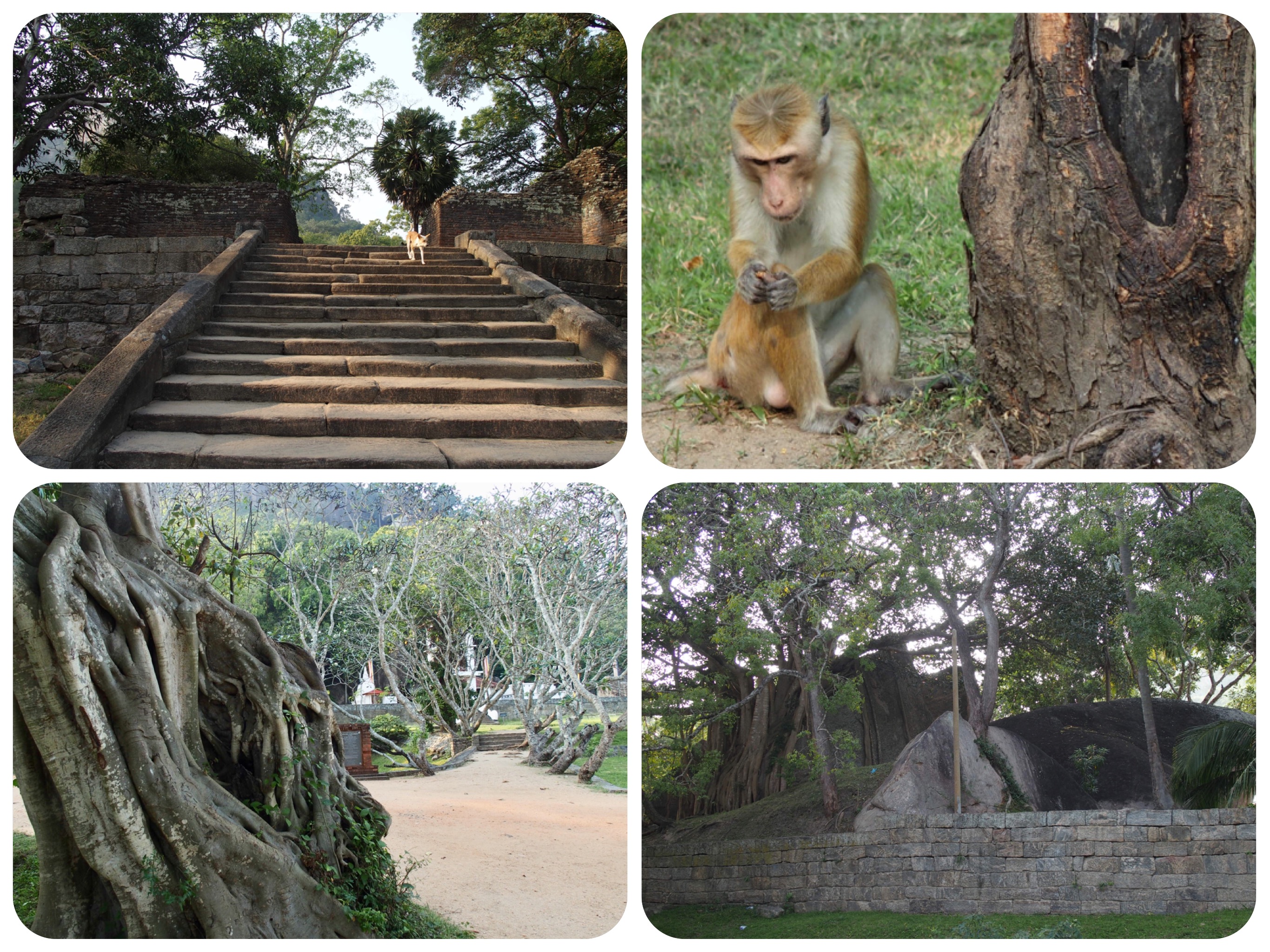 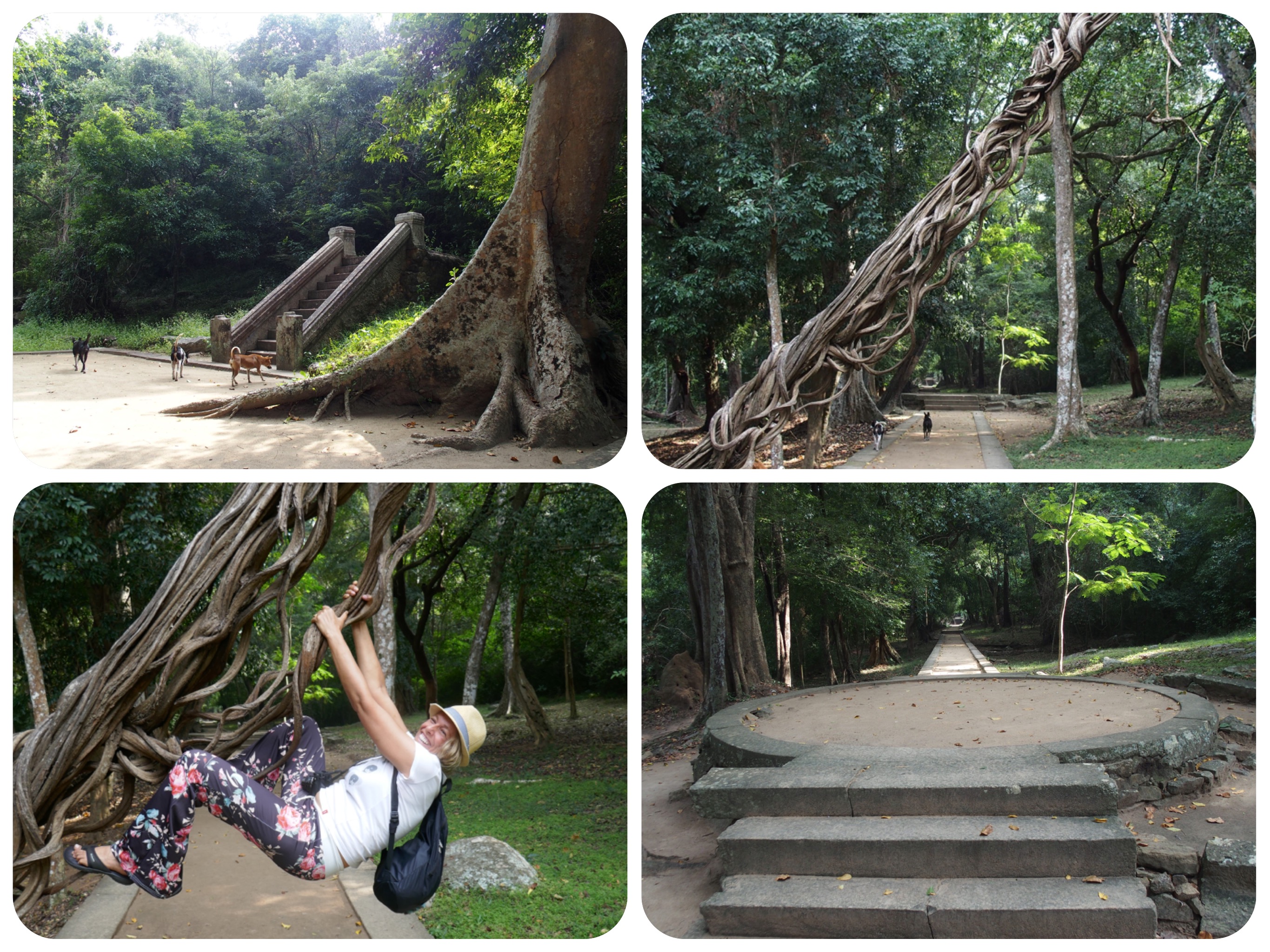 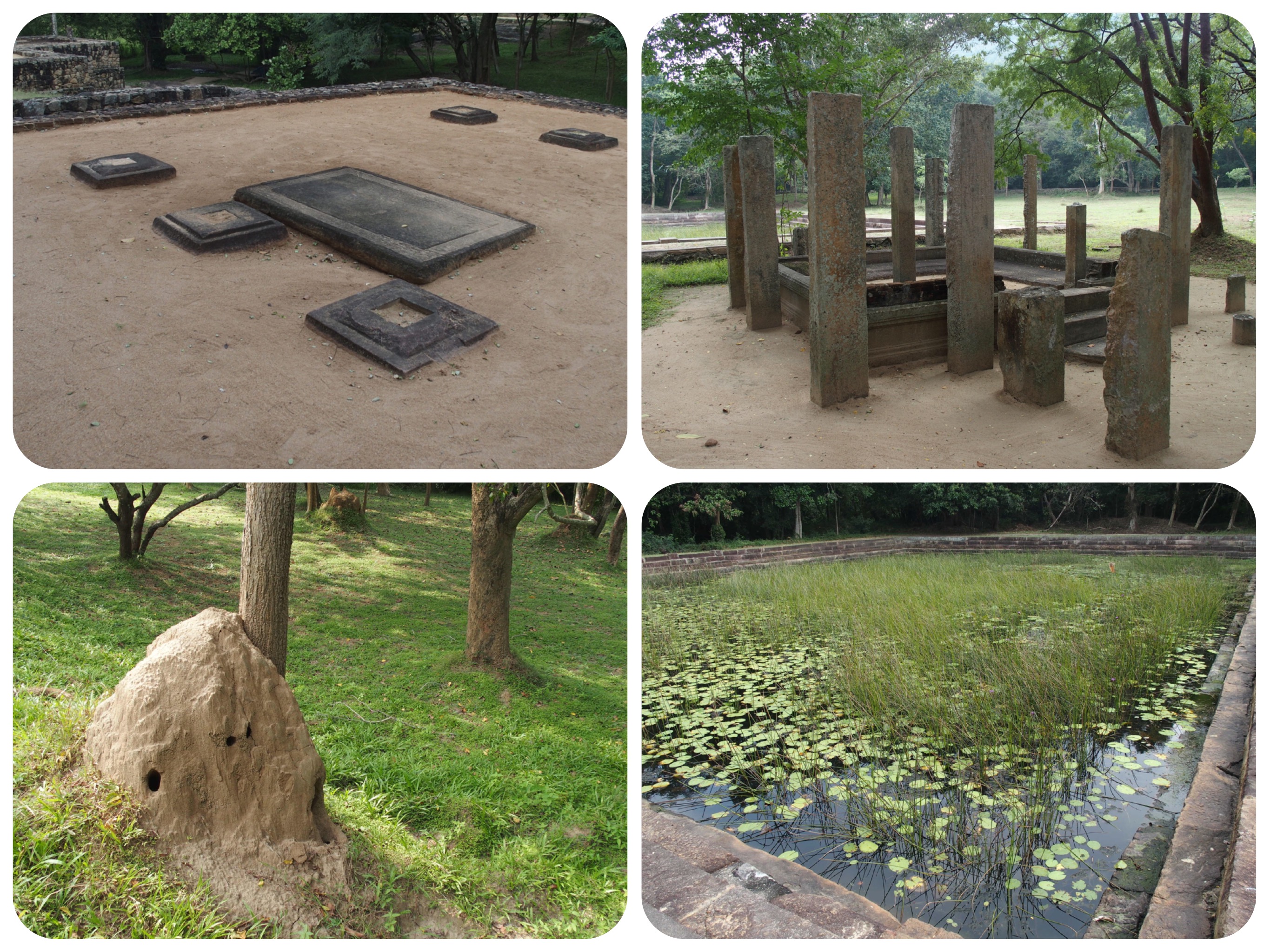 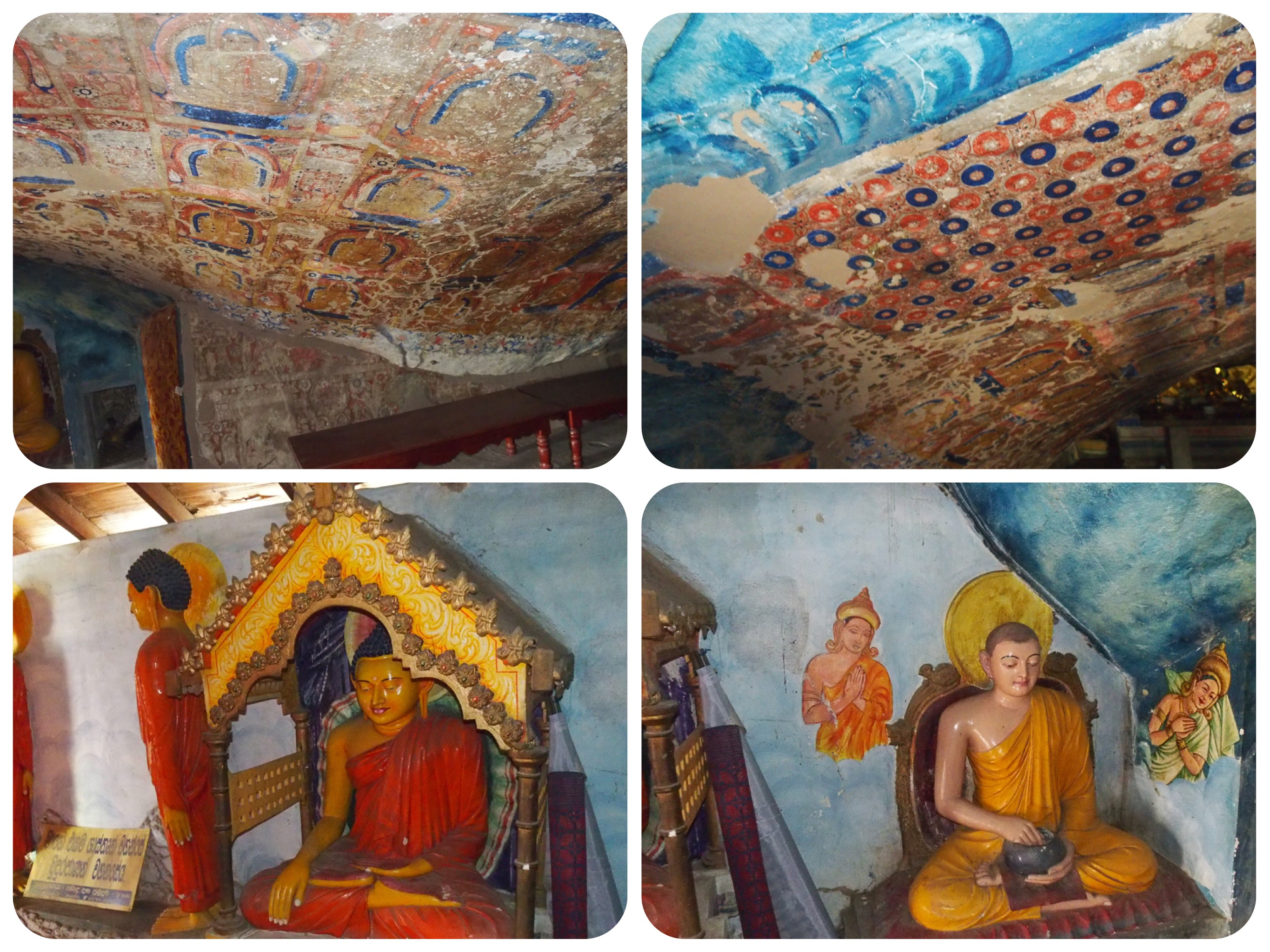 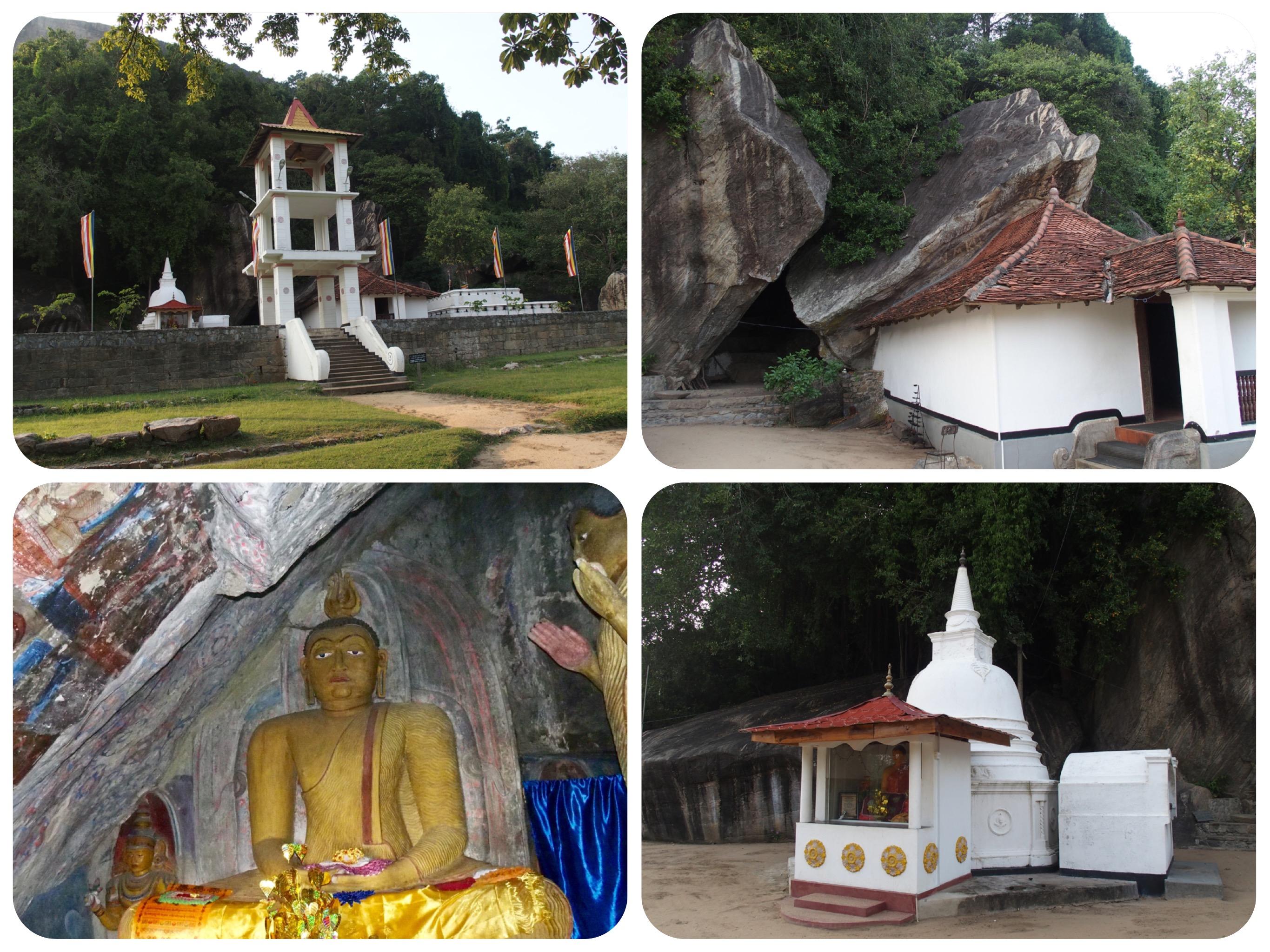 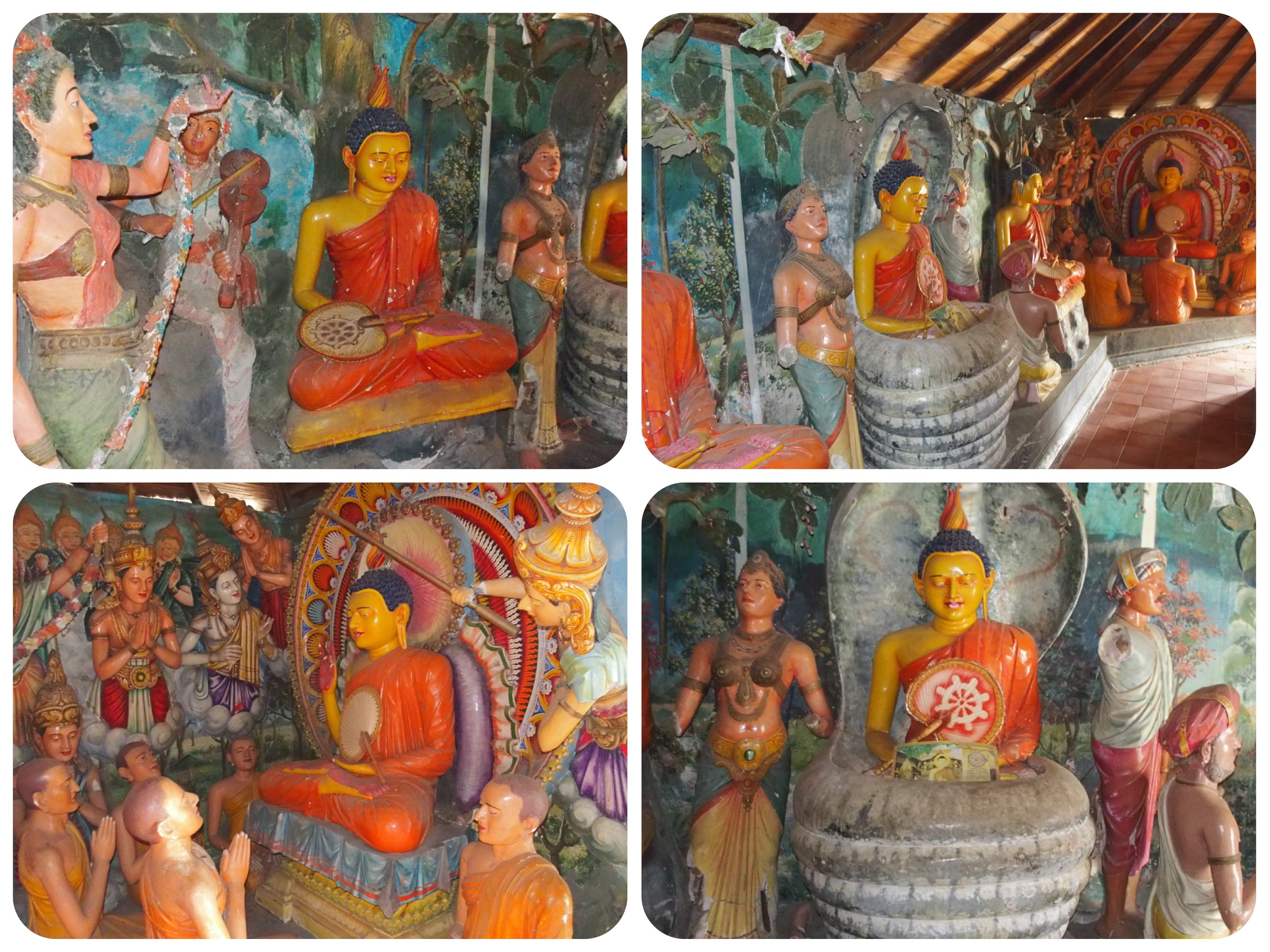 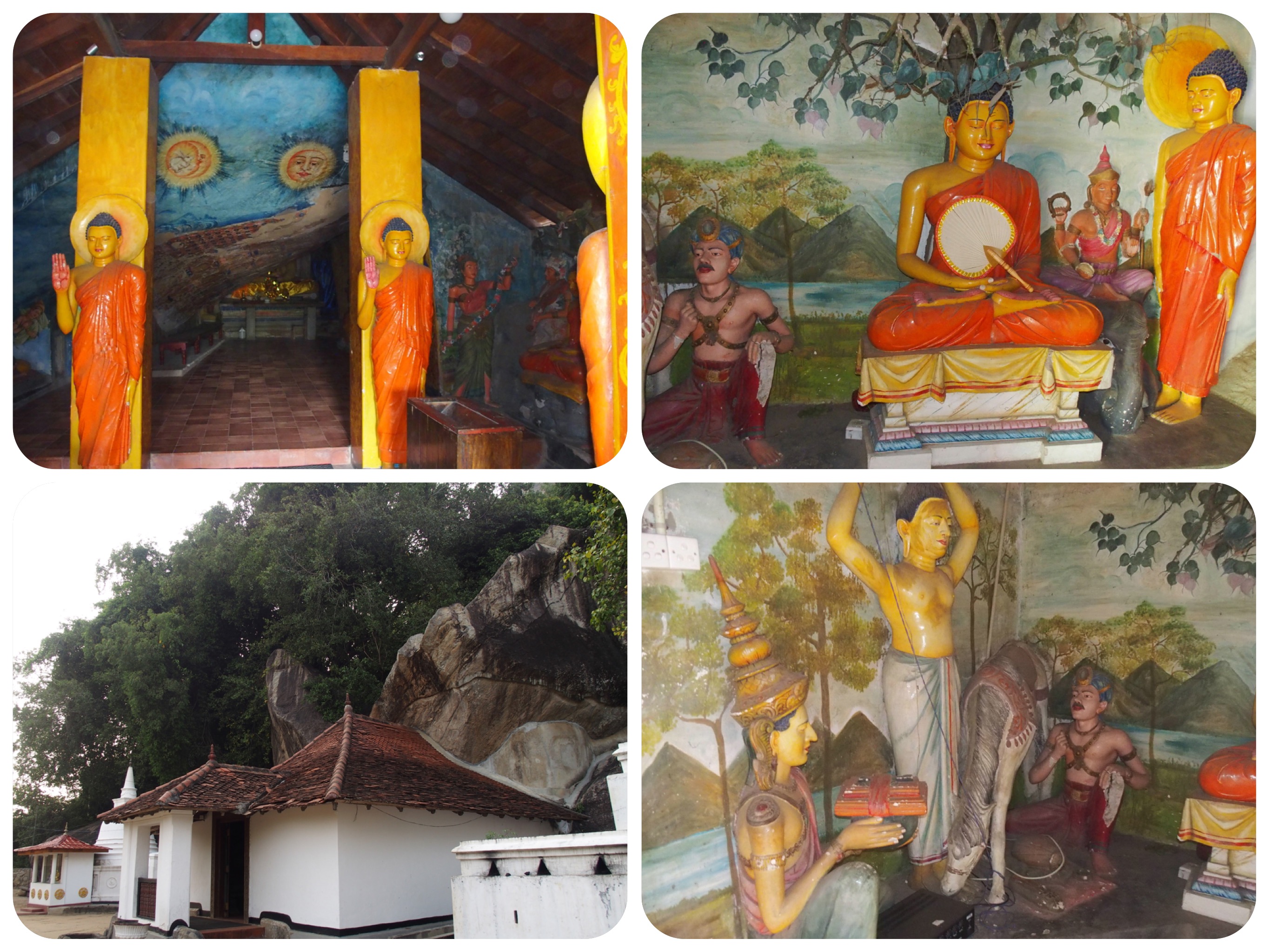 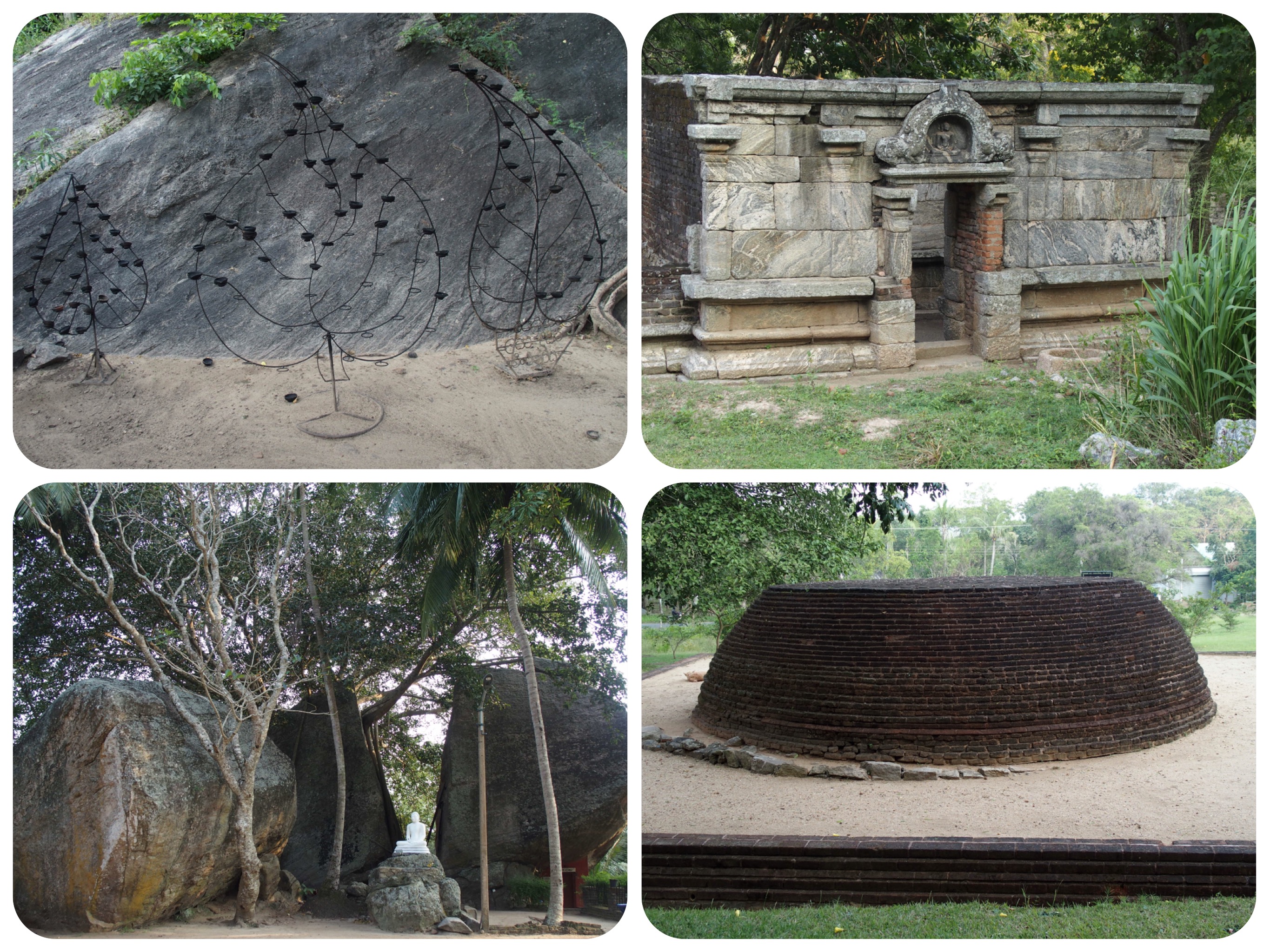 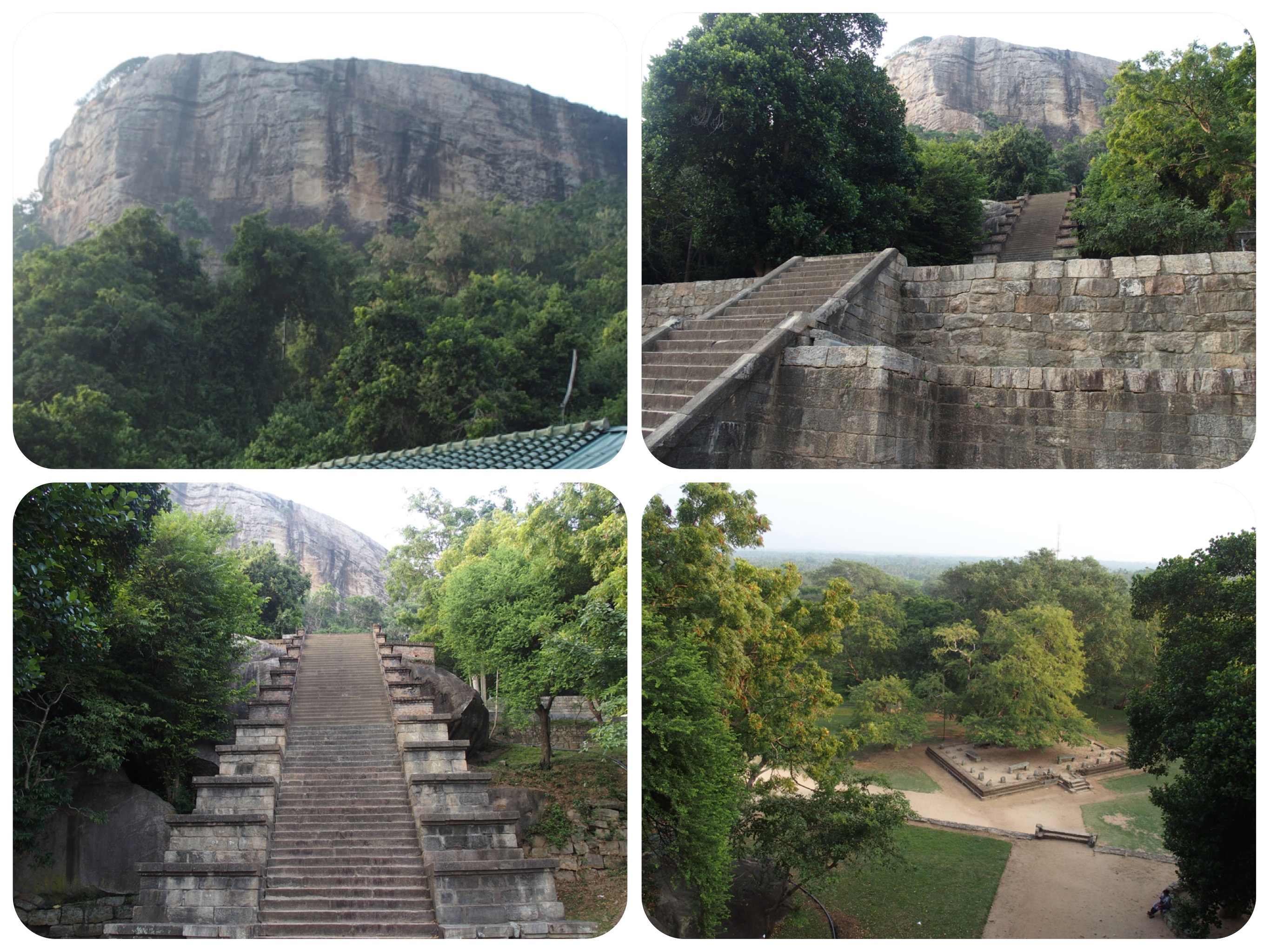 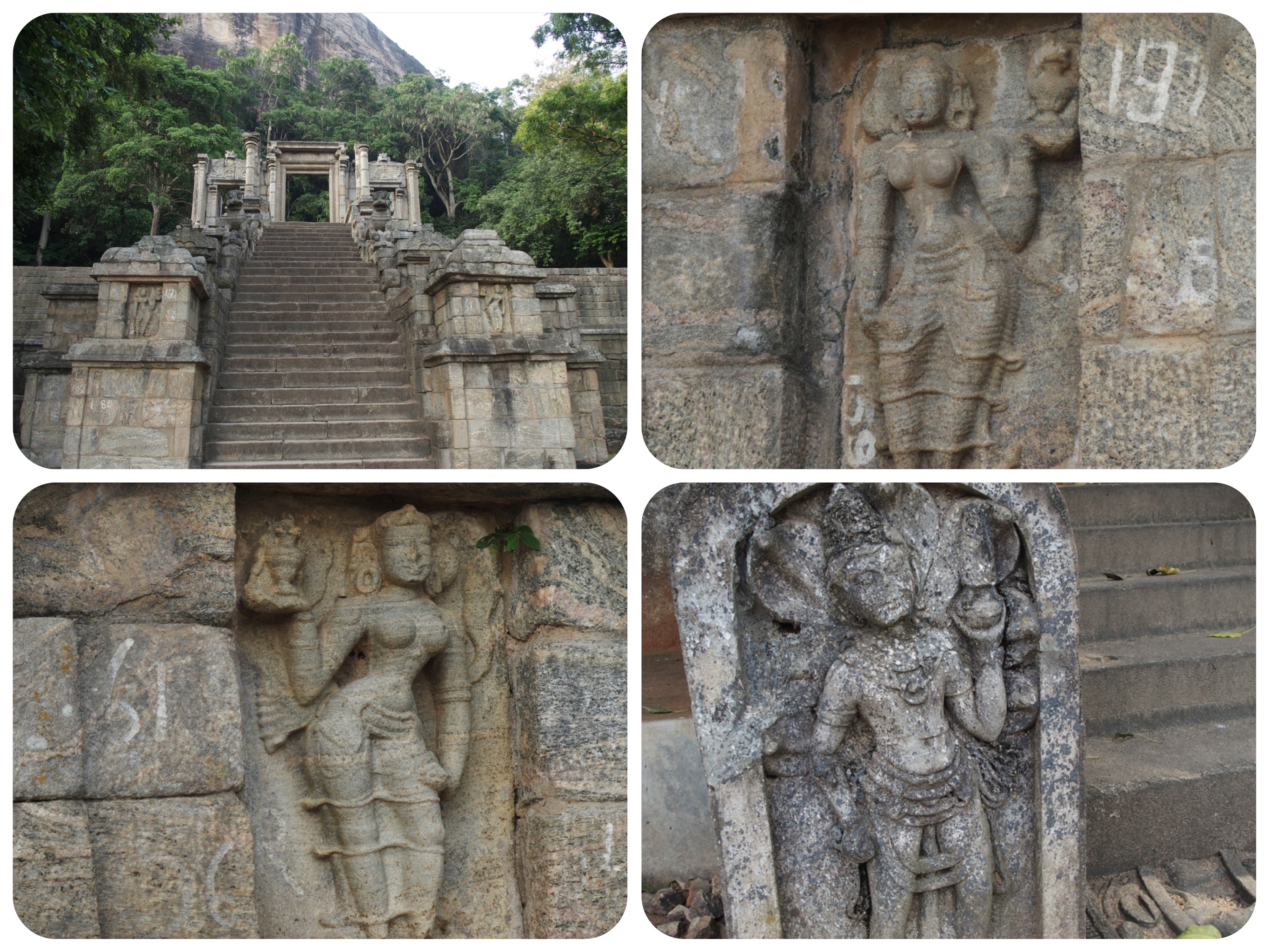 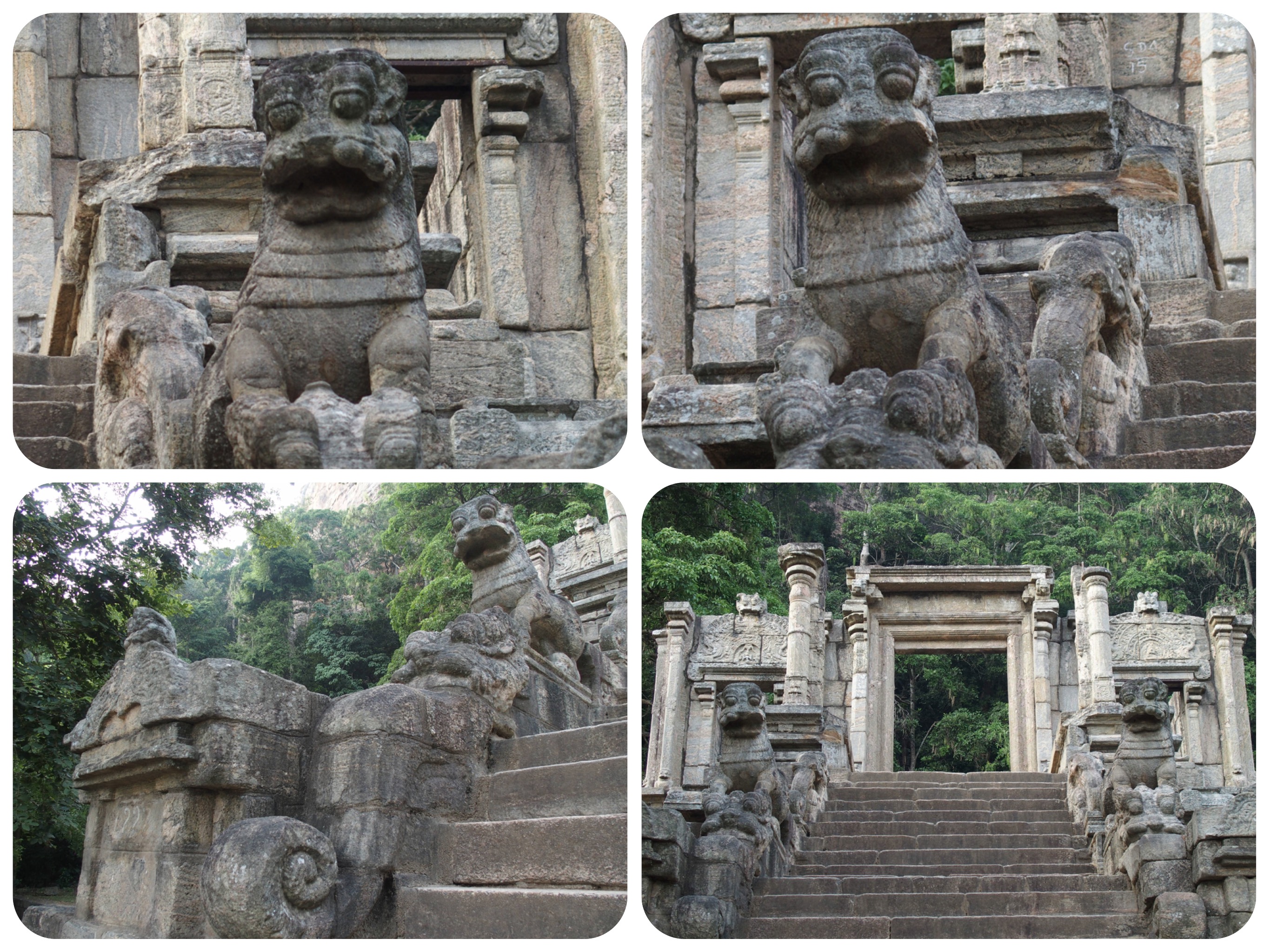 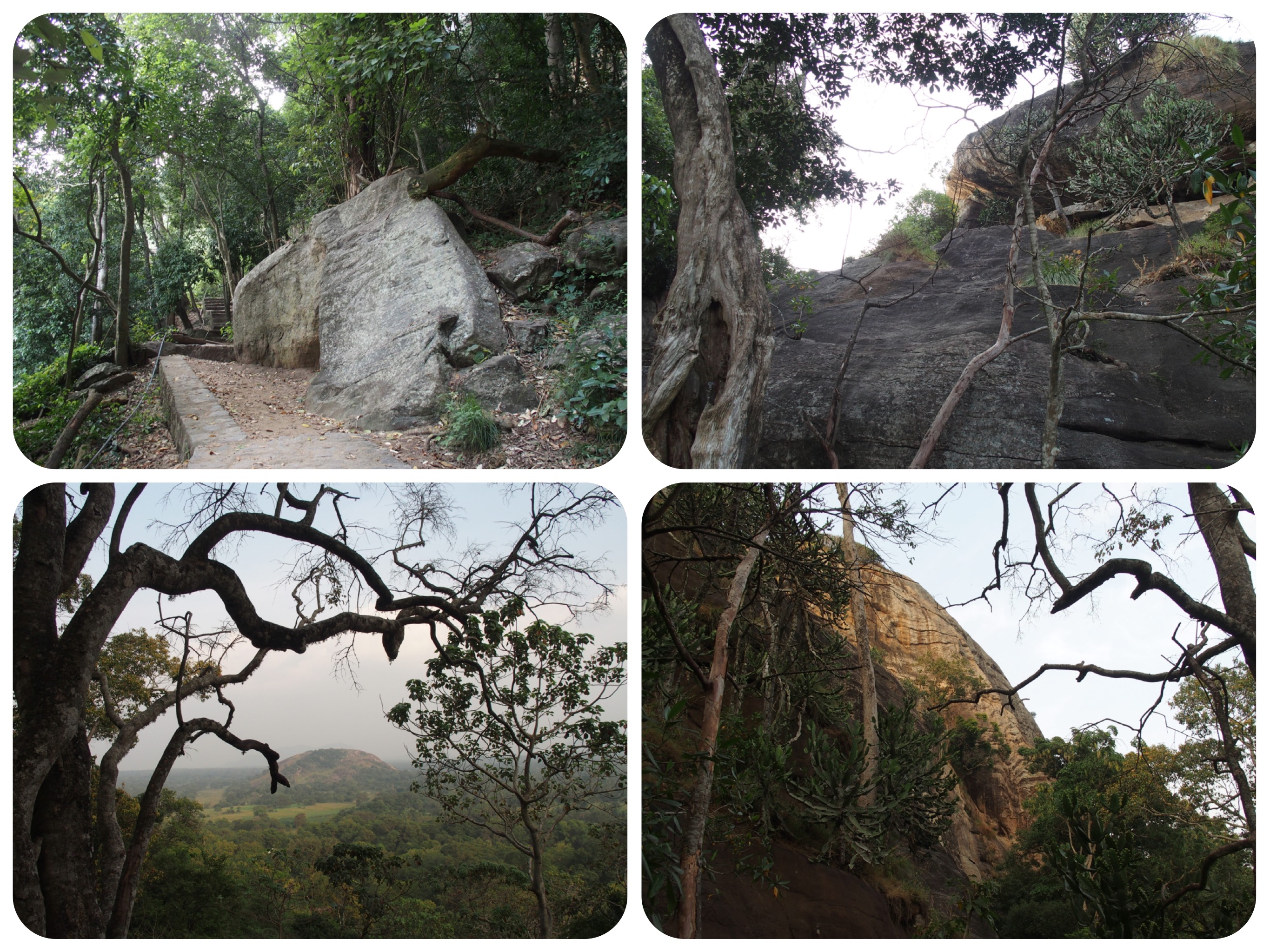 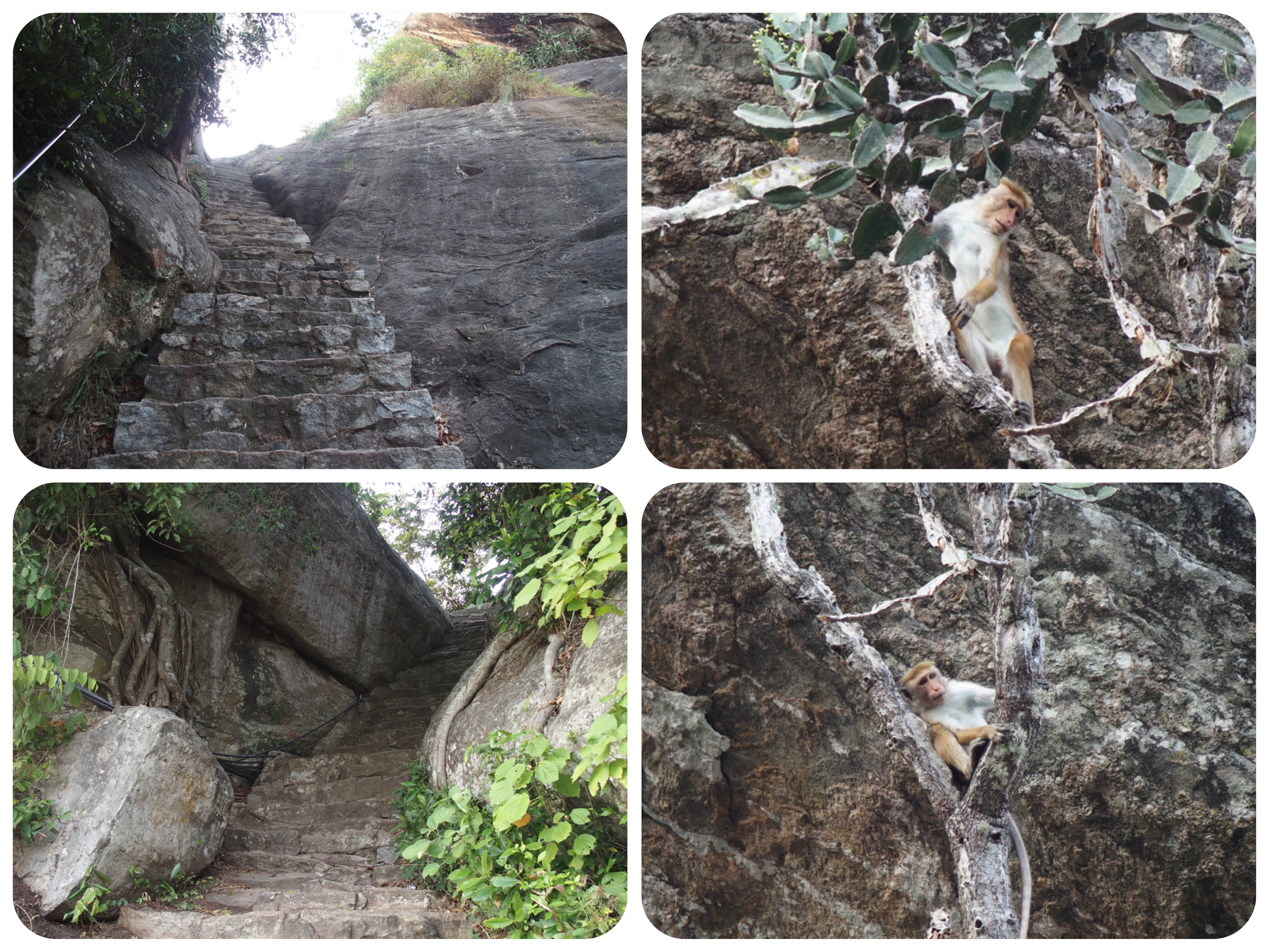 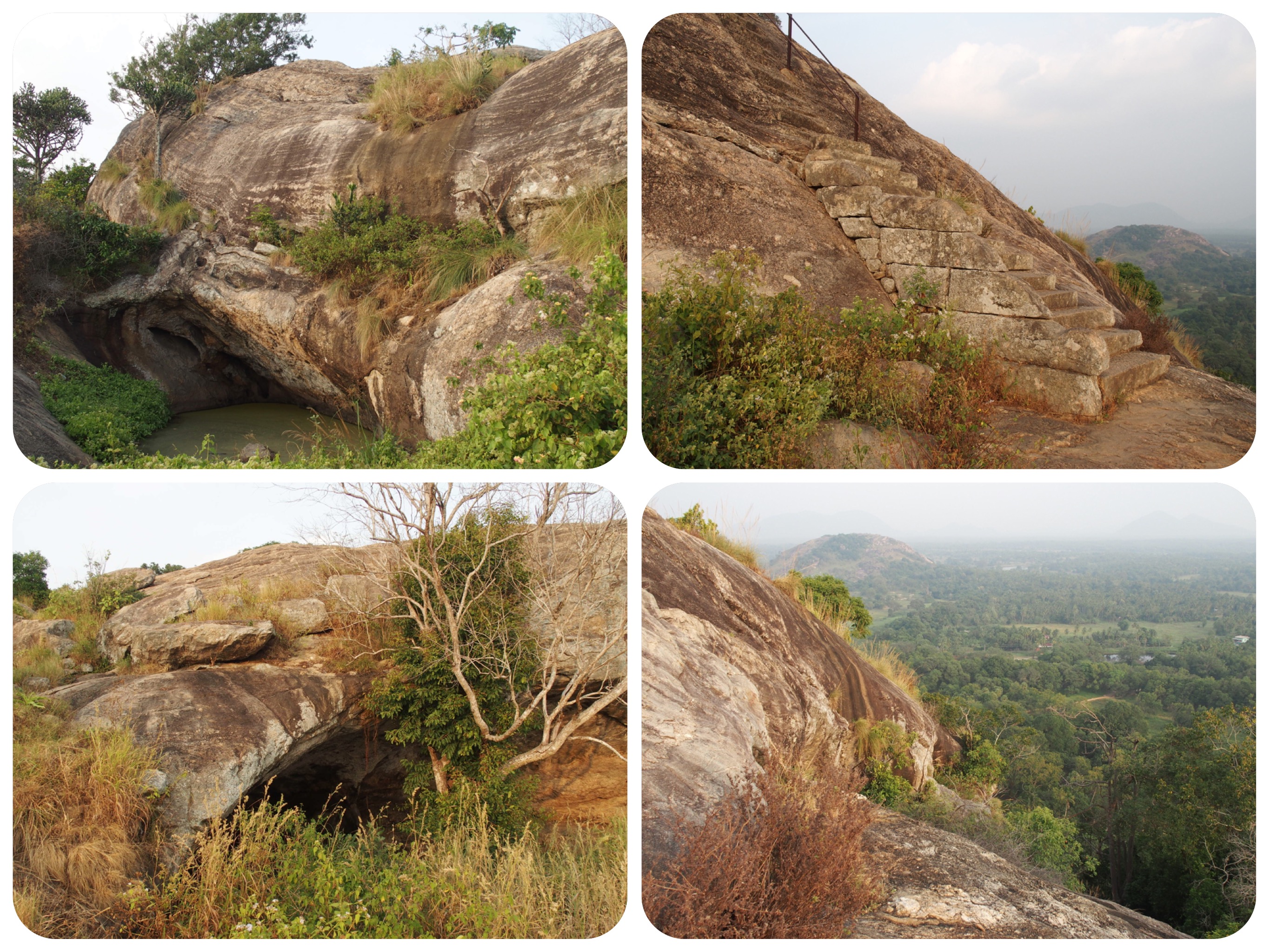 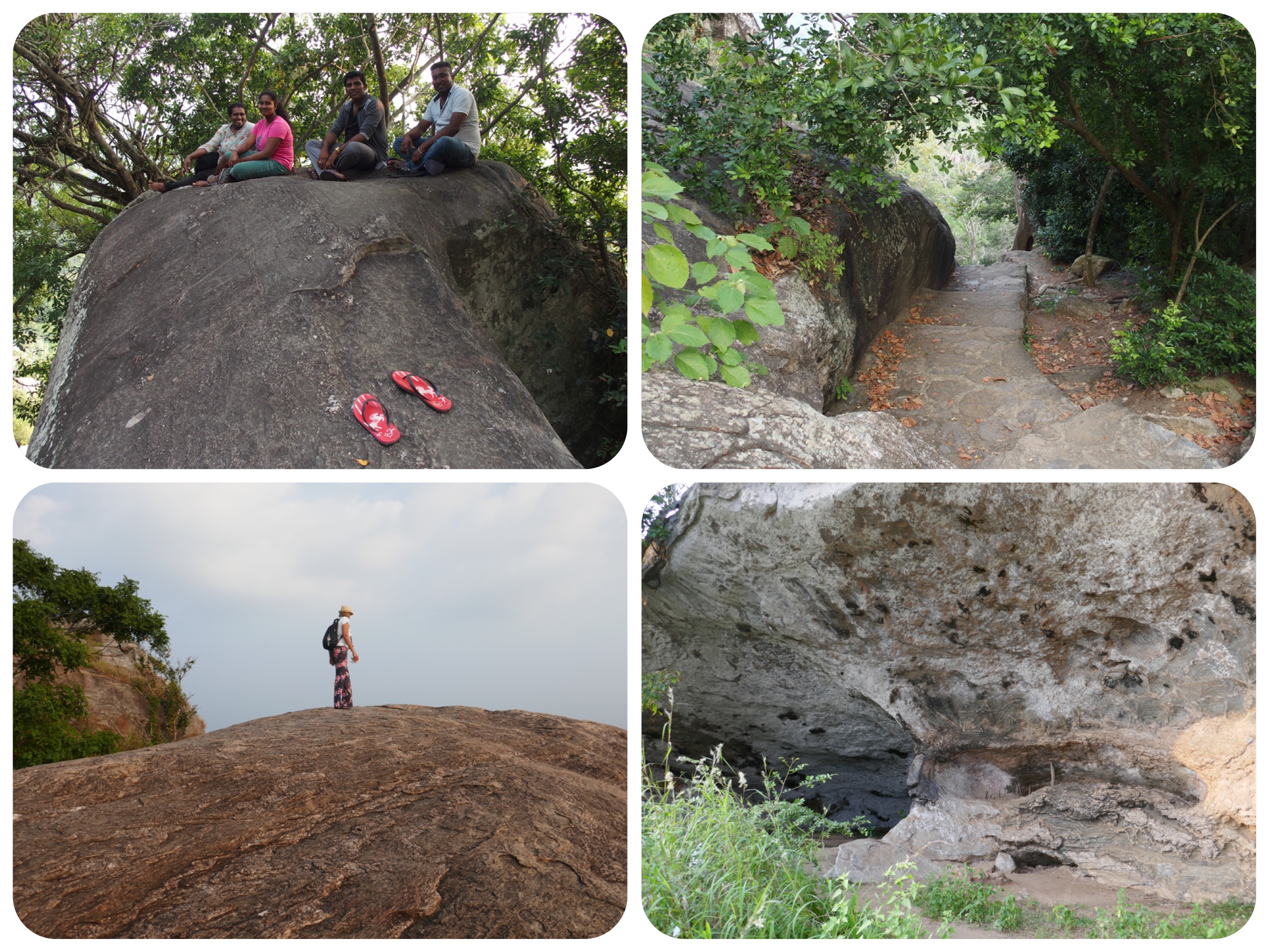 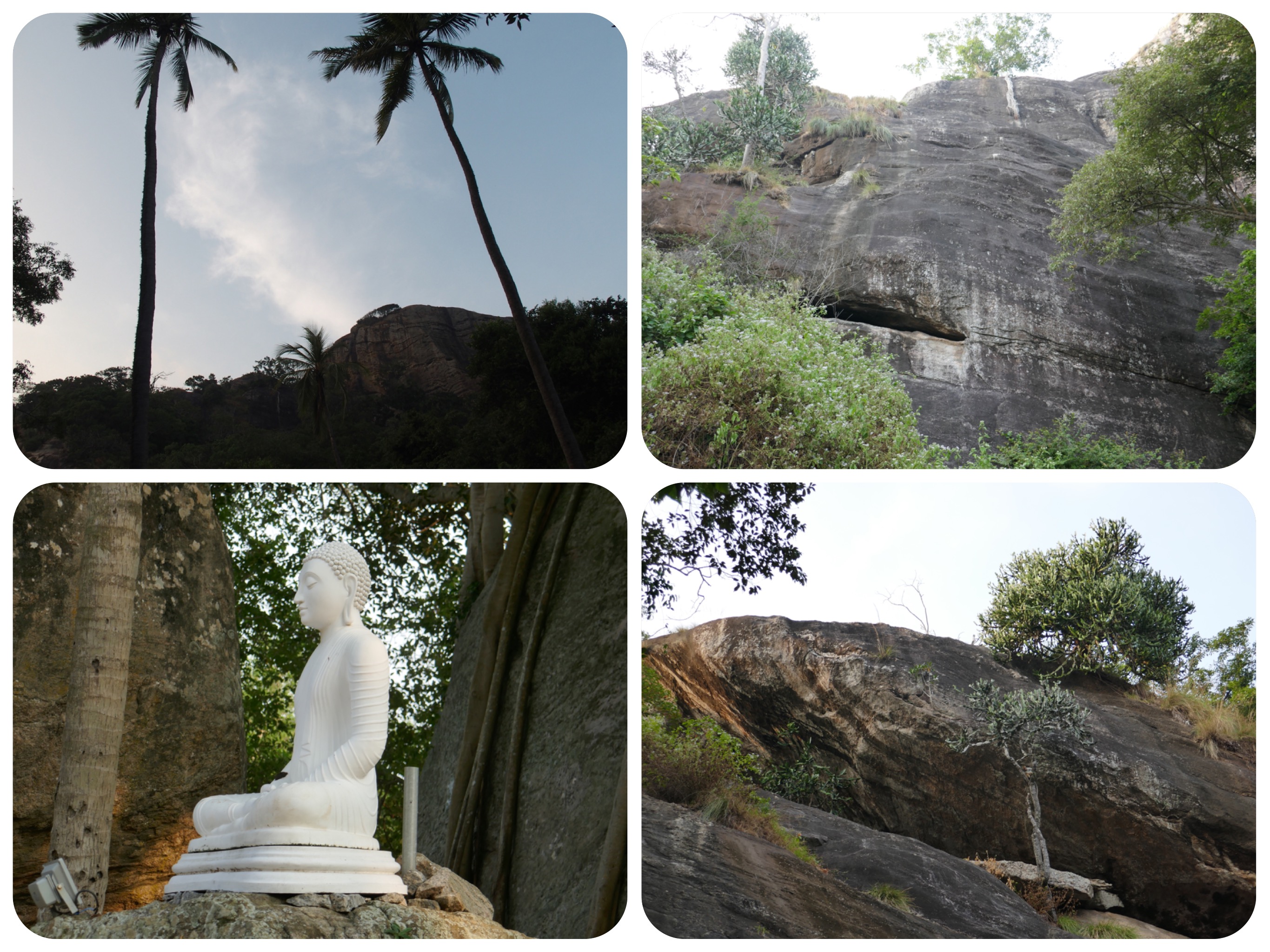 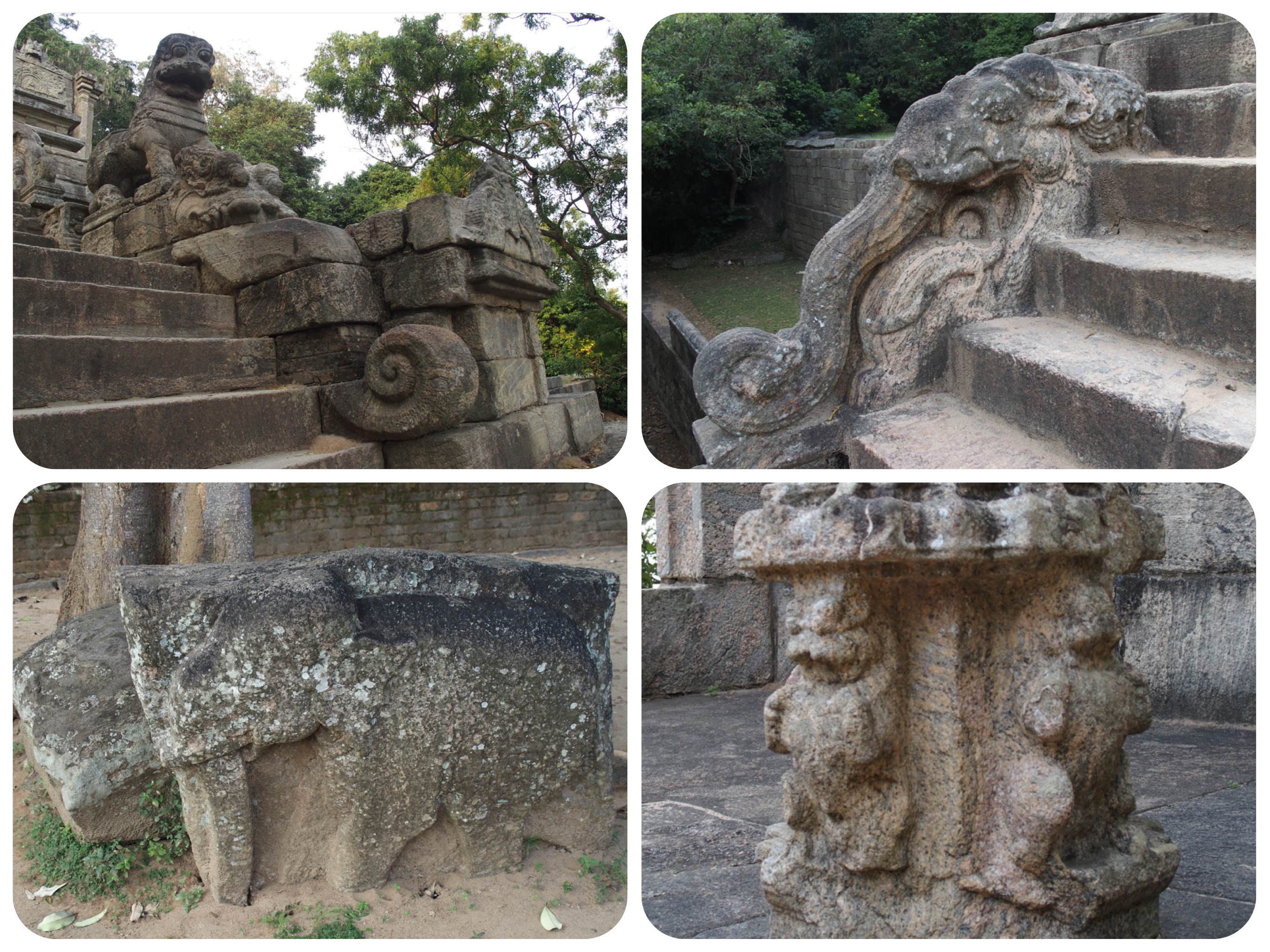 We celebrated our last breakfast in Colombo, knowing quite well that we would not be eating as well during the rest of our trip through rural Sri Lanka.
We had our last soy cappuccinos and tasted all the Sri Lankan specialities on offer, packed our bags and met our driver, who will be with us for the balance of our three week trip.

We left the busy traffic in Colombo behind, as we headed north towards the sacred Buddhist city of Anuradhapura.
The drive was a long one, on narrow two lane roads, and we had planned a few stops along the way.
Our first stop was at Arankele Monastery, an ancient forest monastery that houses a meditation cave under a rock formation, as well as the ruins of a once beautiful temple complex.

The road became gravel as we neared the Monastery.
We passed by small houses in which I could see pretty Sri Lankan girls bathing outdoors in their saris and combing their long black hair.
They looked beautiful.

Grandmothers were cooking in clay pots stacked on top of one another over a fire, and big turtles and skinny dogs tried to cross the road.

The Monastery is located in an ancient forest with towering trees and stone walkways, complete with stone roundabouts and beautiful staircases.

The wooden temples are all gone, all that is left are the stone foundations, pathways and the large scale bathing ponds and water reservoir.

As we walked the grounds of the Monastery, I was overcome by a feeling of peace.
The grounds really did feel holy, serene, calm and so wholesome.
The hot grimy villages that we had passed along the way seemed a thousand miles away.

At the end of the quiet forest path, we reached a small meditation cave situated below a big rock.
A Bodhi Tree grew next to the cave, and inside the cave, there was a small altar and two tiny sitting areas for meditation, one on each side.

It is estimated that the Arankele Monastery was built in the 6th century as a meditation retreat with a cave hermitage for advanced practitioners.

The densely wooded forest around the Monastery is crowded with huge trees and many mischievous monkeys.

The large stone pathways and the massive stone foundation of the temples indicate that the monks were supported by a patron king who helped finance building this ancient forest monastery.

It is said that the monks did much of the actual construction work, which is aligned with the Buddhist practice of supplementing sitting meditation with physical labor, to advance the growth of the monks on all levels.

The austere practices of the recluse monks were no doubt supported by their isolation and seclusion, which even now, feel so serene and holy.

Beside the building sites, there are lily ponds and a stone hot water bath measuring 100 feet long and 60 feet wide.
There are grinding stones which were used to grind and prepare herbal medicines.

From there, we continued north to the ruins of the ancient city of Yapahuwa.

Located on a quiet road, the ancient city of Yapahuwa is large, and is surrounded by an outer and an inner wall, with entrance gates on all four sides.

The green park surrounding it is forested with old trees, creeks and rocks.

The most impressive is the massive black rock formation that resembles an elephant.
Hundreds of stone steps are carved into the rock.
But in order to get to the rock, we had to first climb a very steep stairway that seemed to stretch all the way to the sky.

The stairway was made of stone, with impressive decorations of deities, dwarfs, elephants and Buddhist motifs.

Luckily it was not raining, and almost nobody was around, so we took our time and climbed slowly up the uneven stairs that meandered up into the rock formation.

We could see meditation caves carved into the rock, and open vistas overlooking the plains and forest below for many miles.

In the early 13th century Yapahuwa was the capital of the country, and it housed the Sacred Tooth Relic of the Buddha for about 11 years.

King Bhuvanekabhu, the son of King Parakramabahu, was stationed at Yapahuwa in order to protect the country from invaders.
He built the palace and the temple on the rock.

After the fortress was abandoned monks converted it into a monastery.
On top of the rock they built a stupa, planted a Bodhi tree, erected a shrine and a rock shelter/cave that was used for meditation.

These places gained popularity and renown during the late period as the royal family and the nobility of Sri Lanka strongly supported Buddhism.

I don’t know why we were so tired, but when we climbed down from the rock, I felt as if I had walked all day long.

In the car, as we continued the drive to Anuradhapura, Jules and I both fell asleep.
I think it is the relentless tropical heat and the fact that we are still adjusting to the time zone.

We arrived in our hotel in Anuradhapura by 8PM.
By that time, it was totally dark outside.
You wouldn’t feel it by the temperature, but because it is wintertime, the sun sets early, at around 6:30pm.

There are no luxury hotels in Anuradhapura, just small guest houses.
Our guest house gave us their best room, but the shower did not have any hot water nor water pressure.
We were moved to the family room that had extra beds for kids, but at least there was a decent shower with hot water.

We showered off the heat of the day and gave them our laundry to wash for us.
We ate dinner in the garden, served by a friendly boy wearing a sarong.
The dinner they made us was lovely, and I was able to try for the first time a favorite dessert in rural Sri Lanka, “Buffalo Curd and Treacle.”

Curd and Treacle is a simple dessert made of buffalo milk yogurt which is served in thick chunks, and on the side, you get an amber color coconut honey to drizzle on top of the curd.
It sounds simple, but it tastes divine.

The coconut honey is what we call coconut syrup, but in this land of coconuts, it has a rich and complex natural taste.
Unlike the coconut syrup that we get in the USA or in NZ, this syrup is thick like honey and tastes just like honey as well.

The combination of the sour curd with the sweet coconut honey is very good.

Tomorrow we will tour the ancient city of Anuradhapura.
We were out like a light and asleep before you could say: “Have a good night, sweet dreams…”

Wishing you a good night/day depending on which part of the world you are in now….
Tali

← Colombo Sri Lanka
The Sacred City Of Anuradhapura, and the Rock Carvings in Thanthirimale, Sri Lanka →

3 Comments on “Arankele Forest Monastery and The Ruins Of The Ancient City Of Yapahuwa, Sri Lanka”