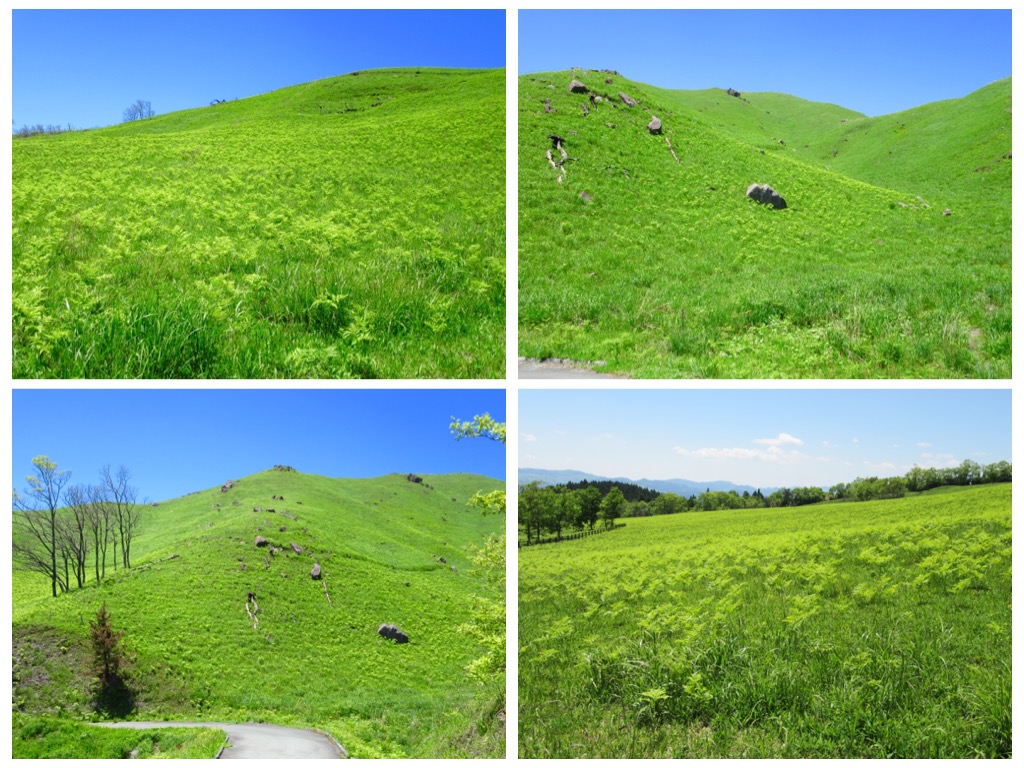 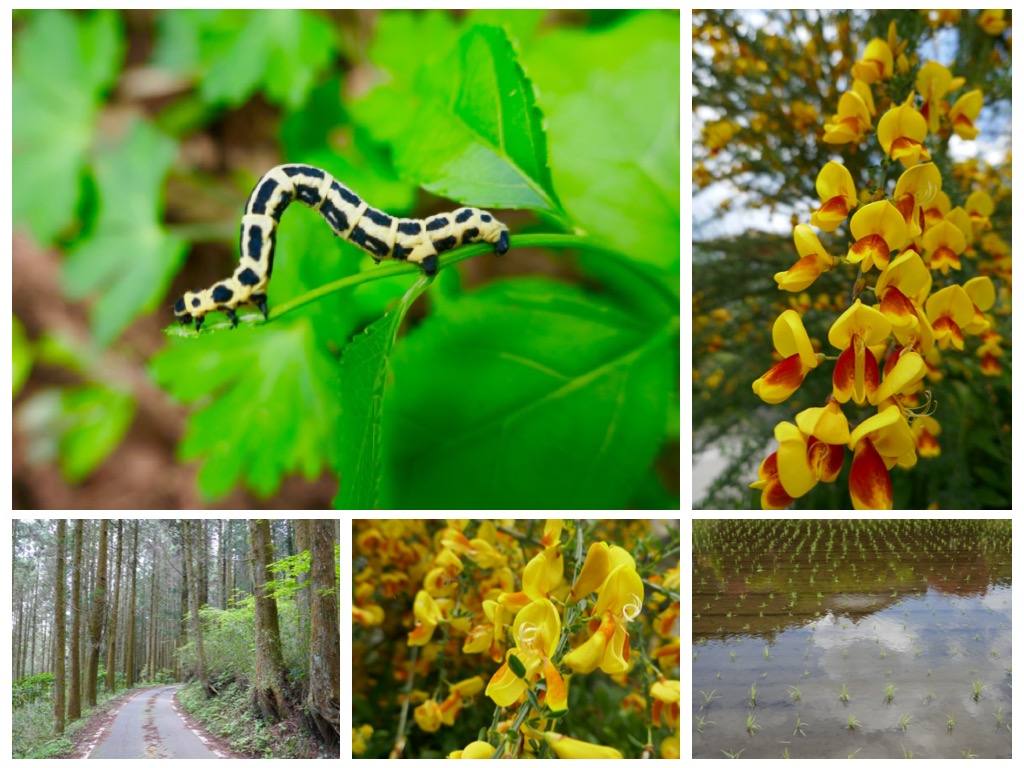 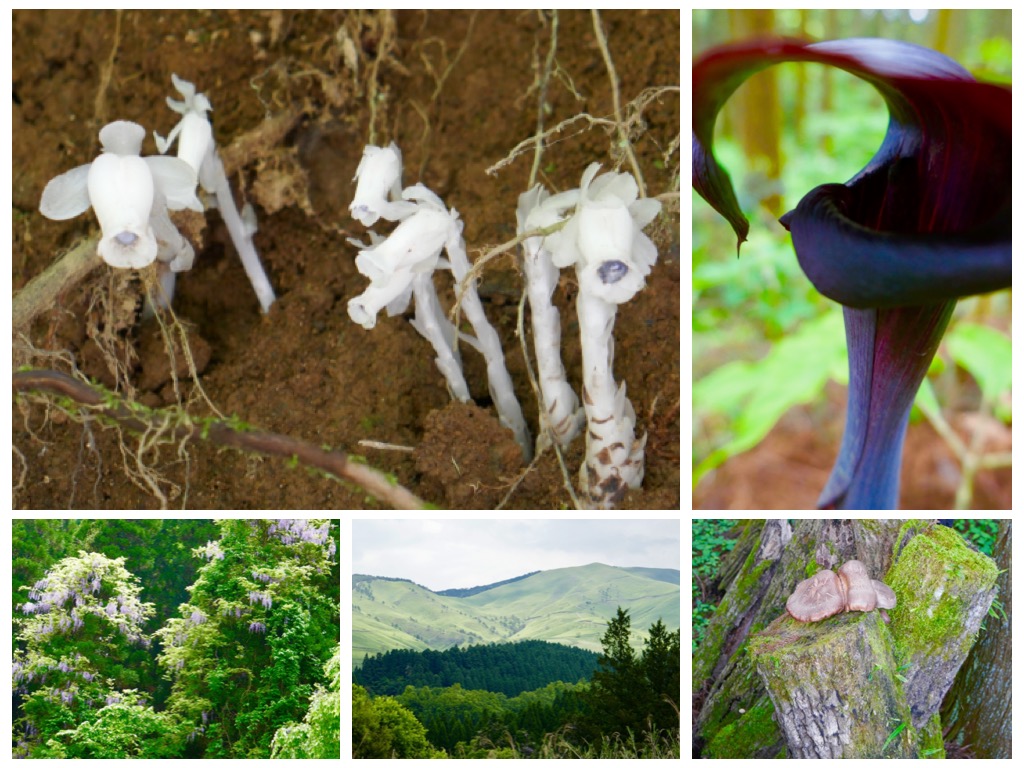 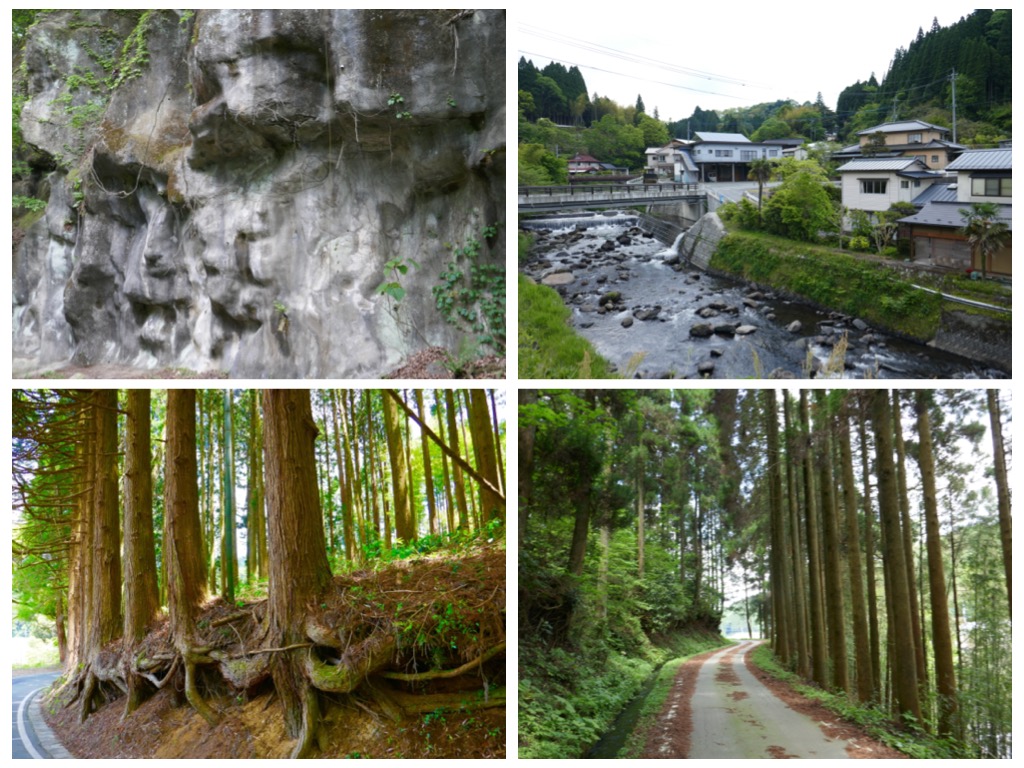 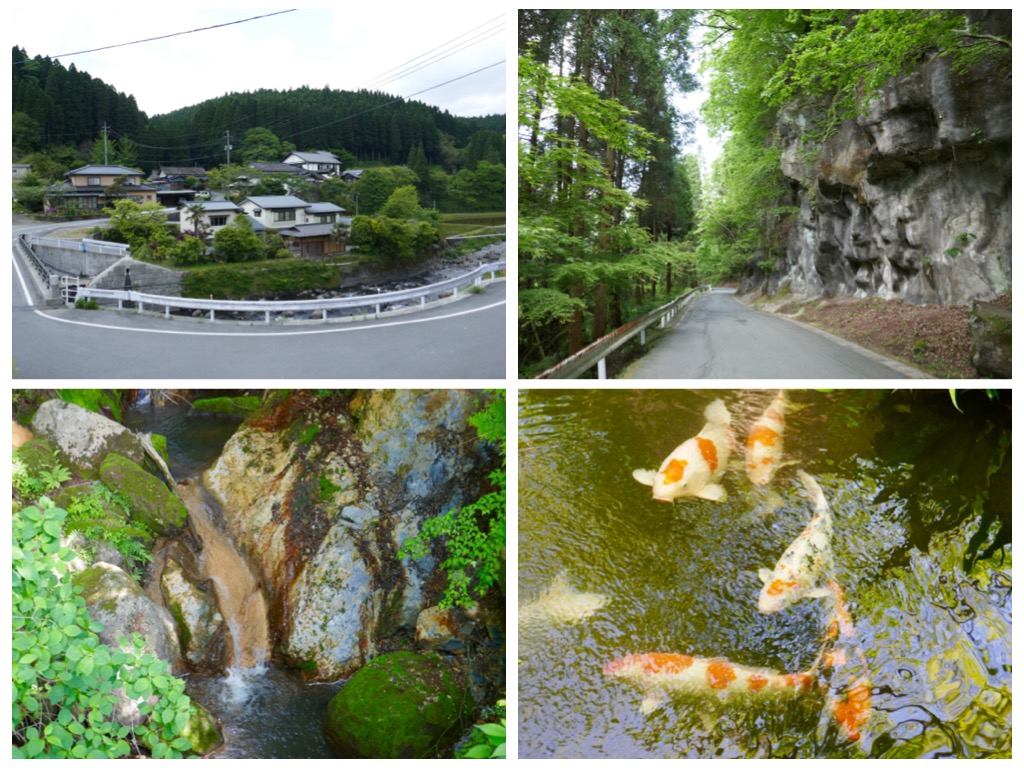 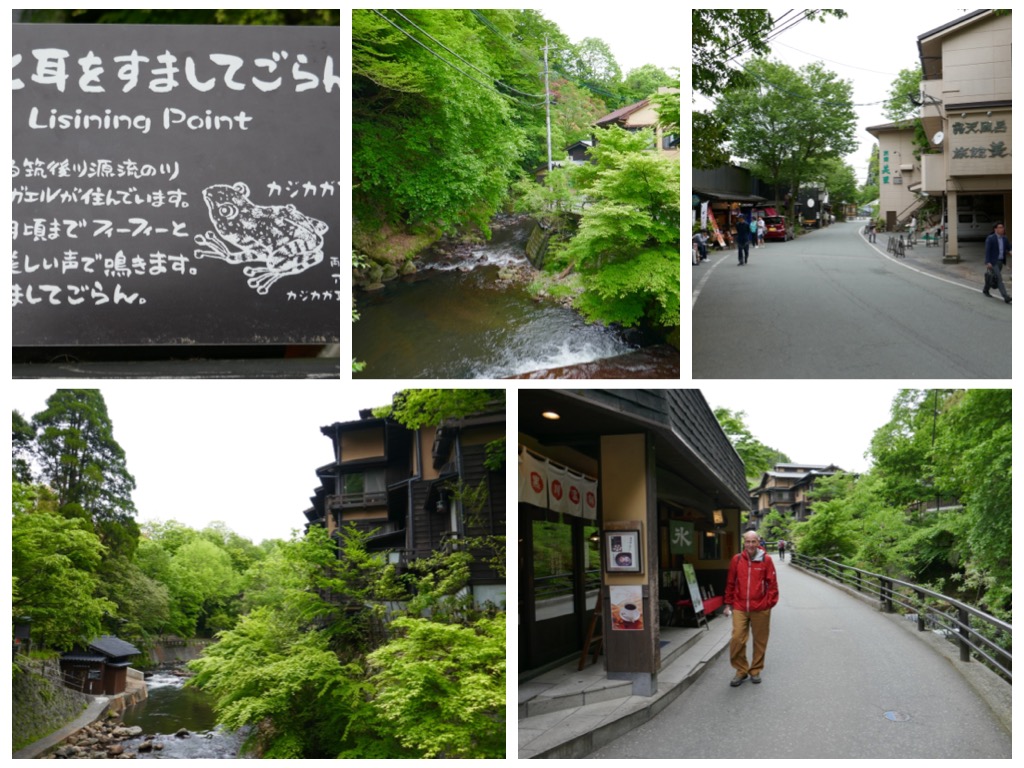 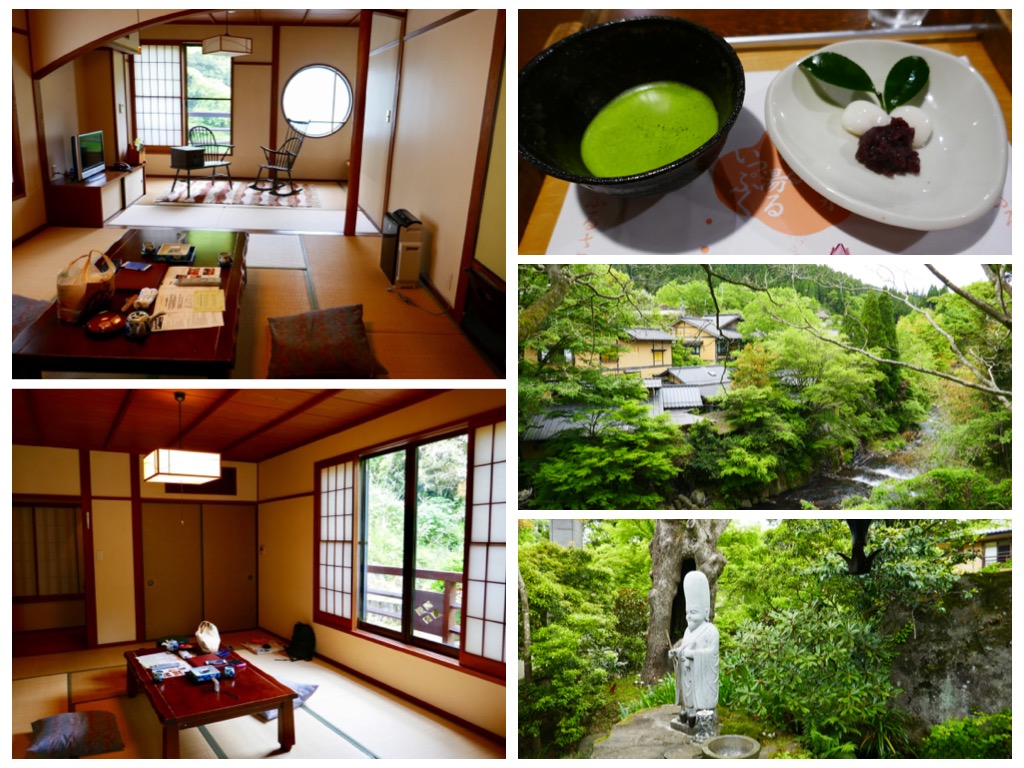 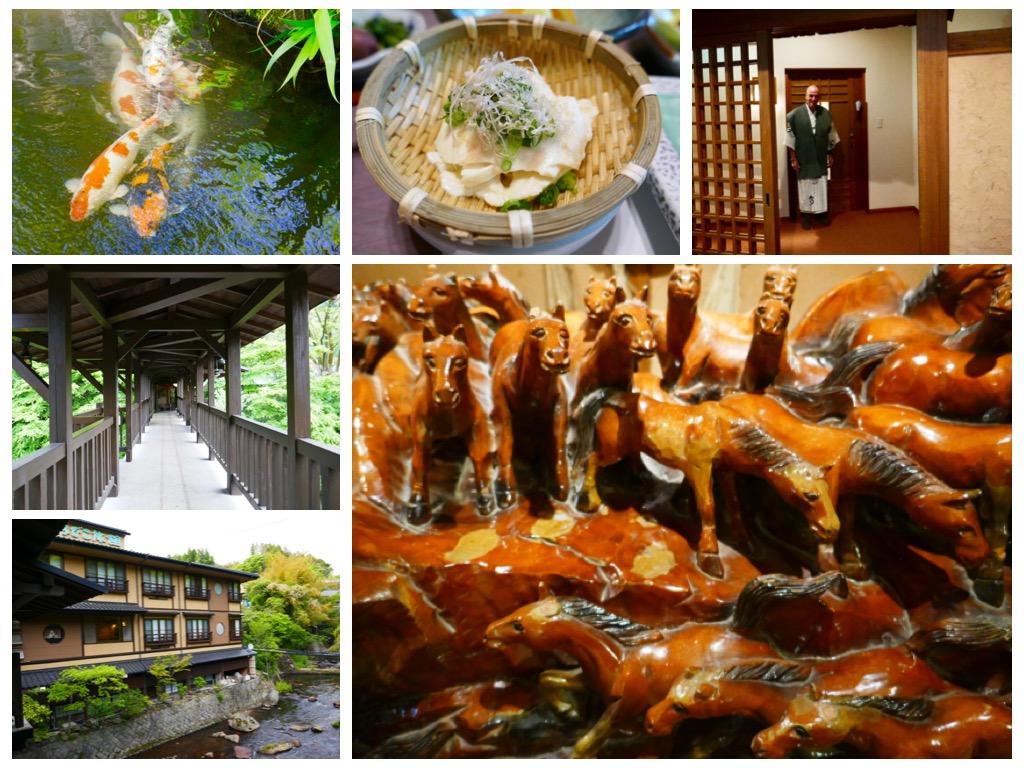 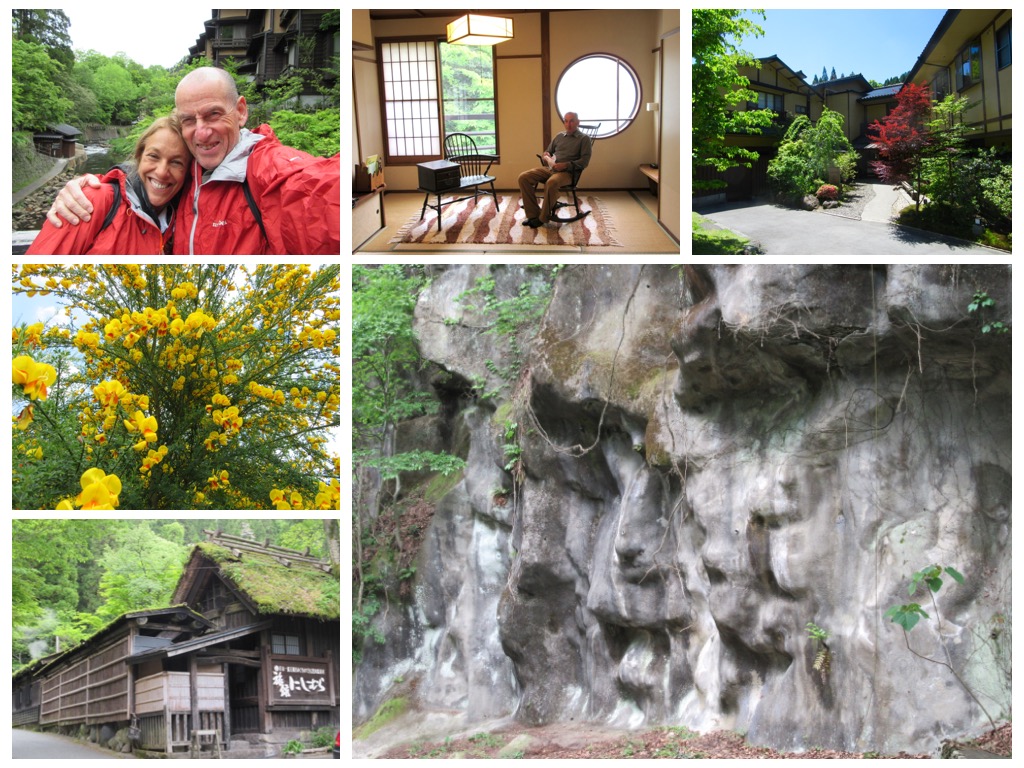 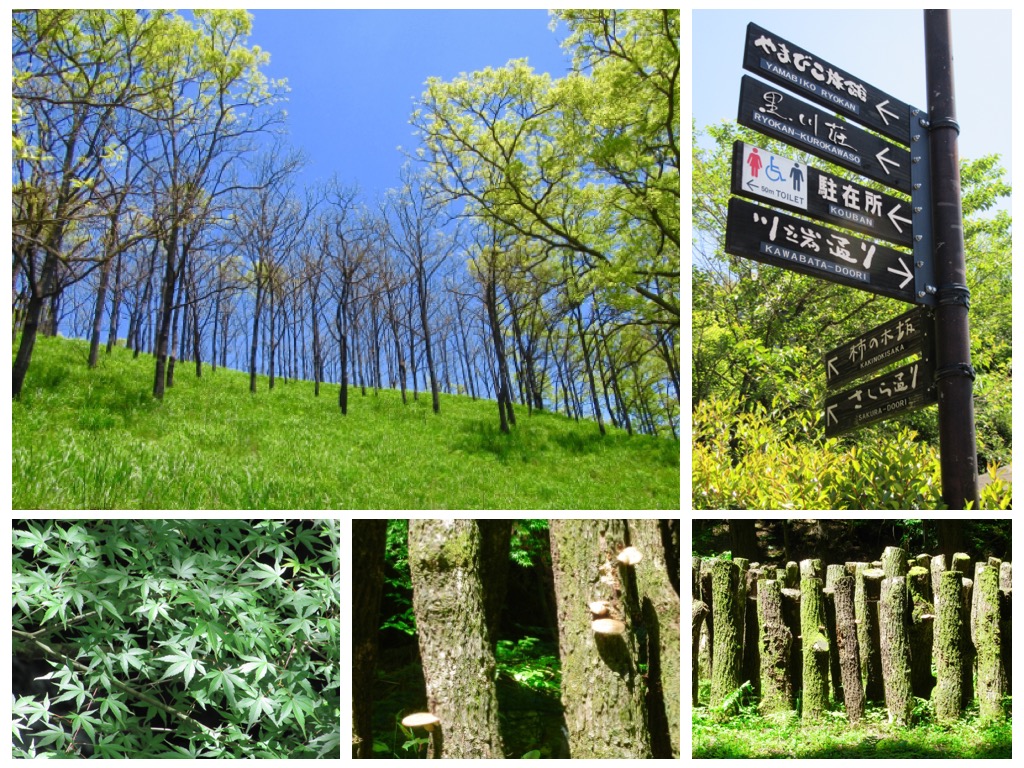 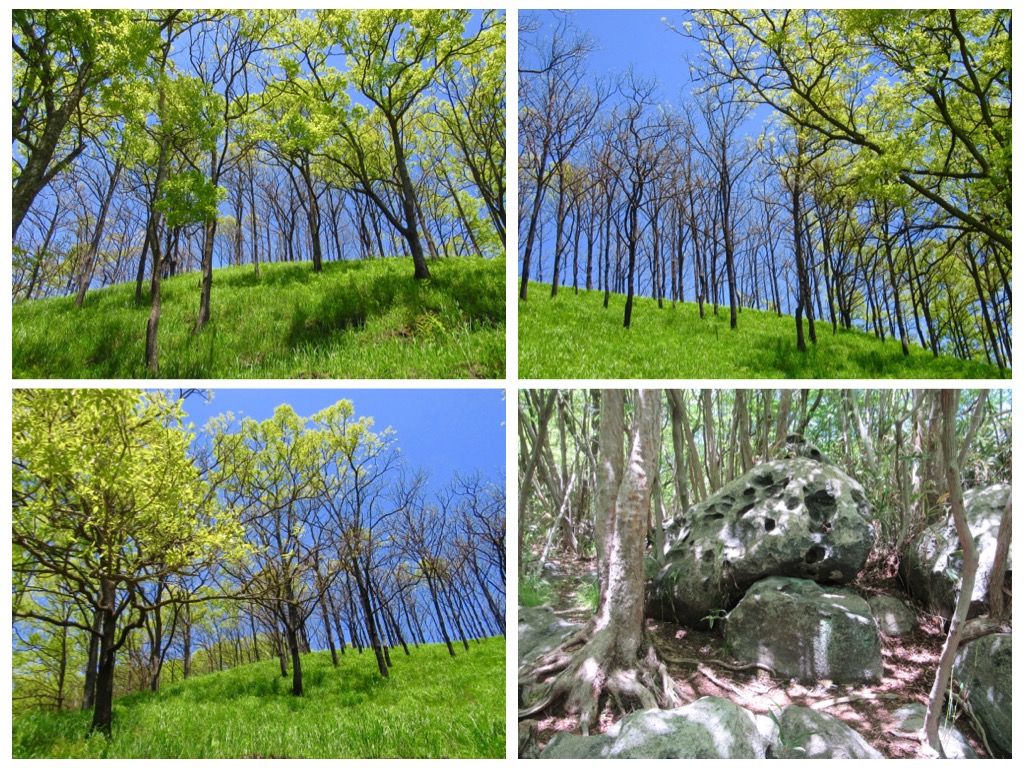 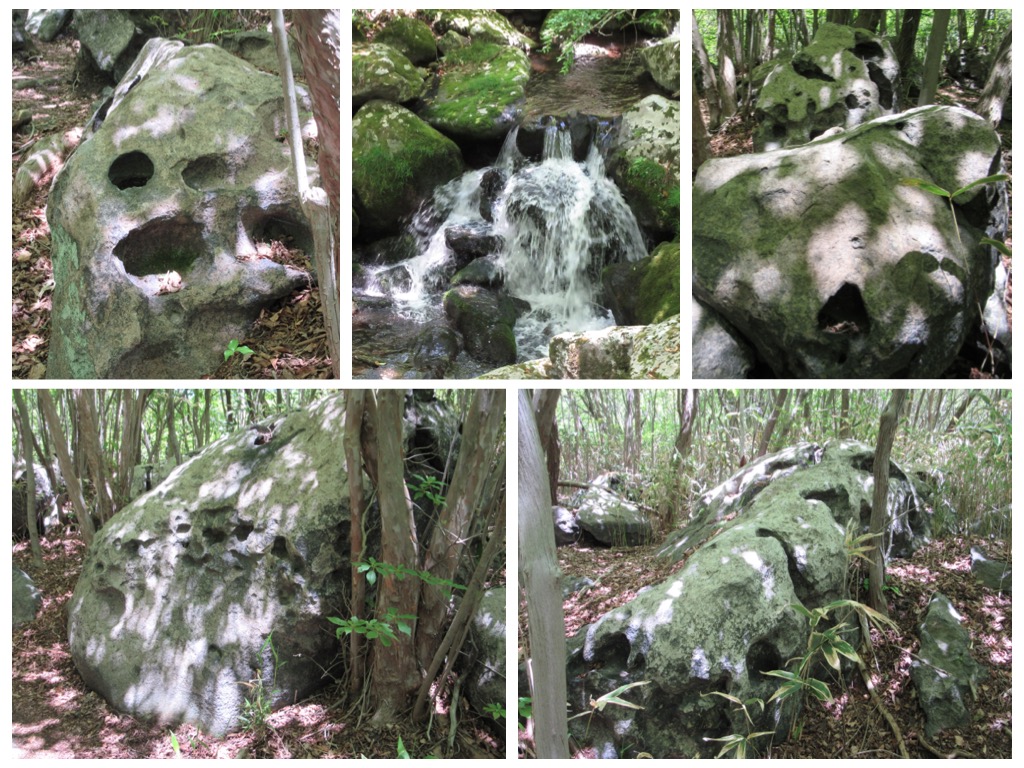 It was a cold morning when we got off the bus at Kurokawa Onsen.
The bus ride from Yufuin to Kurokawa Onsen had been a short, one and a half hour, pleasant drive through the green scenery of hills and rivers.

The hilly village of Kurokawa Onsen intentionally has no big concrete hotels with hundreds of rooms, but only smaller Ryokans set along the river, surrounded by forests.
They have decided to preserve the feeling of a centuries-old Onsen town by carefully restricting any new buildings that are proposed.

There are a few short, steep and narrow streets lining the tiny village, and the morning mist was still blanketing the old guesthouses.

We left our backpacks at the coin lockers next to the bus stop and went for a stroll around the village.
There were only a handful of shops and a few small eateries, all of which were still closed.
Most guests in this small hot springs town eat at their guesthouses.

In order to encourage greater tourism, twenty seven of the town’s Onsens formed a collective that allows visitors to experience the fun of “Onsen Hopping.”

For 1300 Yen ($11.70), you get three entry tickets to use at any of the Onsens in the program.
You do not have to spend them all in one vacation; the wooden medallion you get to hang around your neck lasts for six months.
We saw many tourists strolling through town, dressed in summer kimonos yukatas and wearing getas (traditional wooden sandals) wearing these medallions around their necks.

We did not purchase this medallion because our guesthouse, Yamabiko Ryokan, has many different types of hot spring pools, including private ones that Jules and I could use together by locking the door.

A private couples’ Onsen is a rare treat.
Since you are not allowed to wear bathing suits in the hot springs, most Onsens in Japan are segregated by gender.
The mineral content in the hot spring waters in the area varies from place to place.

Our room was fabulous, located right over the river.
Through the round windows, we could hear many birds chirping and singing – it sounded almost unreal.
We also purchased the Kaiseki meal set for the three nights we stayed there, and had lavish tasting menu feasts every night.

To explore the area, we went on two long hikes while we stayed there.
The first was along the old and unused road that meanders through neighboring villages.
We admired the flowers growing in people’s gardens, the beauty of the quiet hills and the charming houses by the rice fields.

On the second full day’s hike, we went on a nature walk designated on an English map of the area that we got at the information center.
We took with us handmade rice crackers, peanuts and raisins, along with green tea for the day’s walk.

It was a beautiful hike with almost nobody around.
We reached a hilltop observation point and saw the “Sleeping Buddha” on the horizon, formed by three distant mountains that together look like a sleeping man.

We also saw some interesting volcanic rocks and a bubbling sulphuric spring which had cold, rather than hot water.
The forest around us was beautiful, and a few quiet Ryokans were located in remote places.

On our second night, we tried to request that the next two evenings tasting feasts be vegetarian only, but they looked at us with sad eyes, as if we were saying that we did not like their seafood.
We quickly relented and agreed to the regular menu that they had already planned for us.

The Kaiseki tradition requires that not one dish we had already eaten be repeated, except for the plain rice, miso soup and tea at the end of each meal.
Every dish of the twenty five or more dishes that we ate each night, had to be different from everything we had already eaten the nights before.

When it was time for us to leave, they gifted us two lovely porcelain bowls, hand painted with beautiful motifs.

The weather was perfect during the whole time we stayed in Kurokawa Onsen, with cool evenings and pleasantly warm but not hot days.

Kurokawa is located on the northeastern side of Mount Aso near Kumamoto, an area that suffered major damage recently from an earthquake that destroyed whole villages and damaged the rail lines.

We had to switch trains with only three minutes to find the next train and get on it.
All the names of the trains were written in Kanji, which we cannot read.
We ran to the first nearby train we saw and asked no one in particular if this train was going to Yamaguchi, and by the response of the school kids inside, we had to decide without a moment to spare, if this was our train or if we should run up the stairs and then down again to the next platform.

Miraculously, we made it right before the doors closed both times and made it to our lovely hotel in Ureshino Onsen, in time for dinner and a soak in the soft and silky waters of the Ureshino Hot Springs.

← The Onsen Towns Of Yufuin and Beppu And The Stone Buddhas Of Usuki, Kyushu Island, Japan
Ureshino Onsen, Kyushu, Japan →