Visiting Alchi, Lixir and Phyang Gompas In Ladakh and talking with the locals 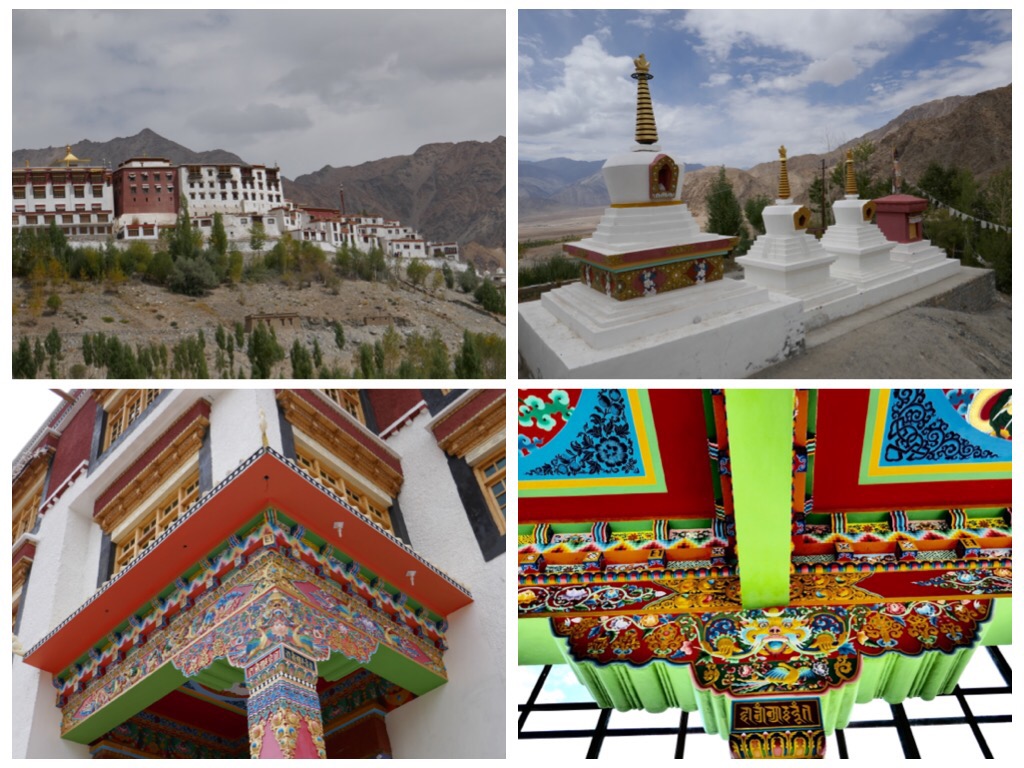 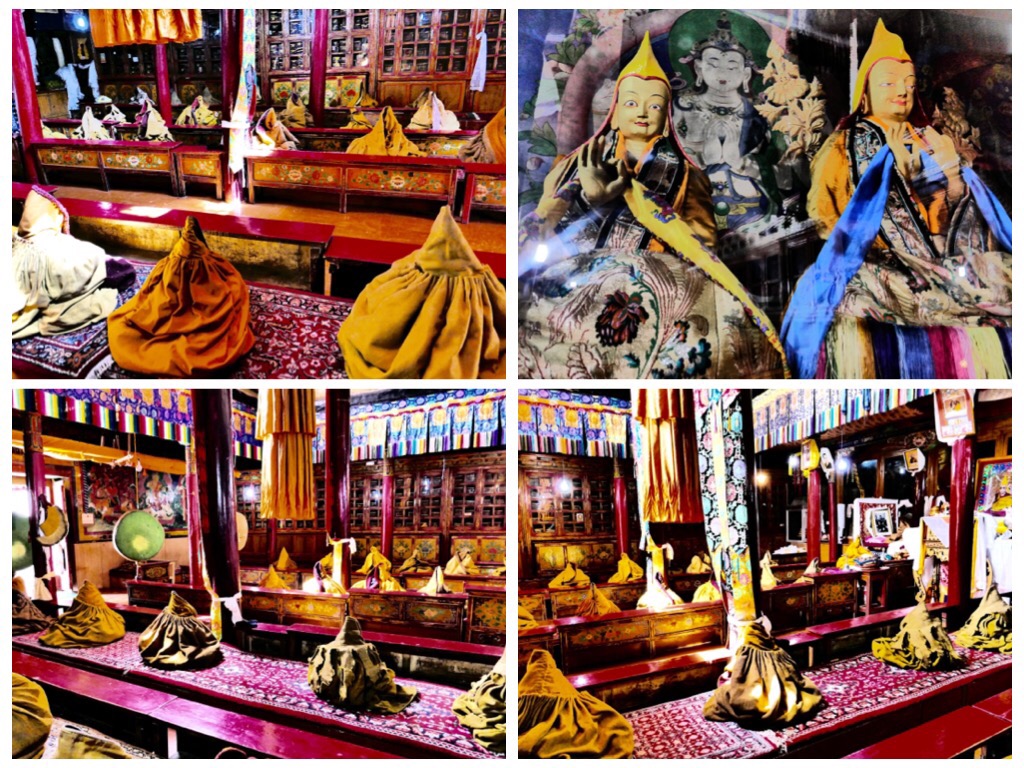 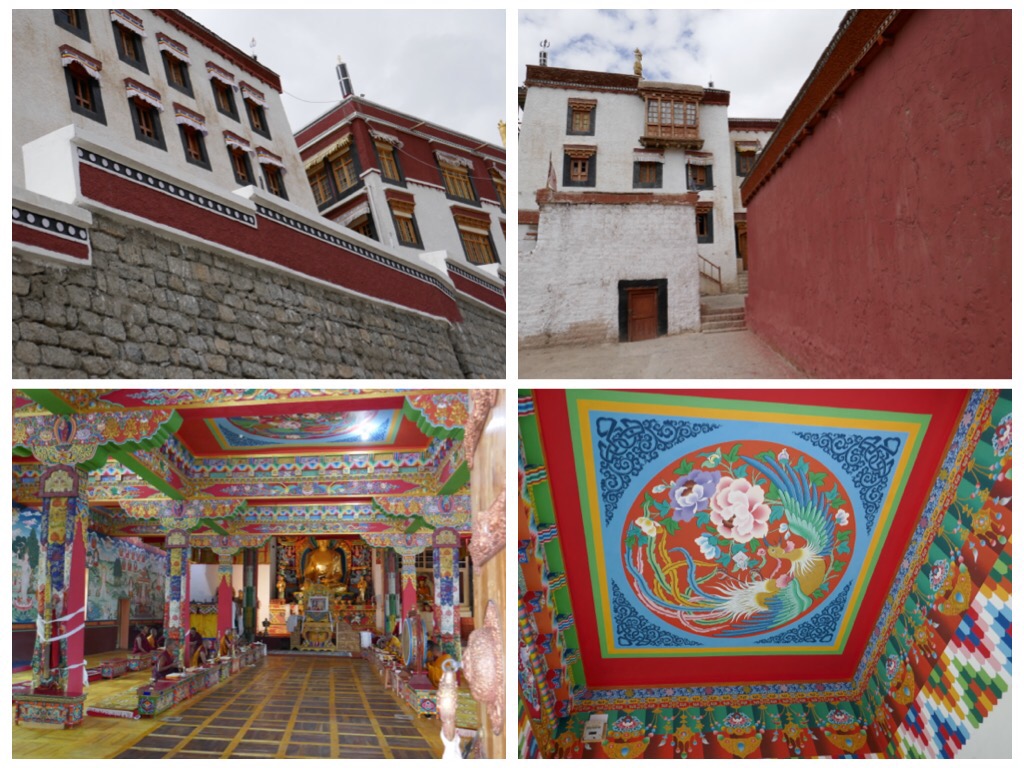 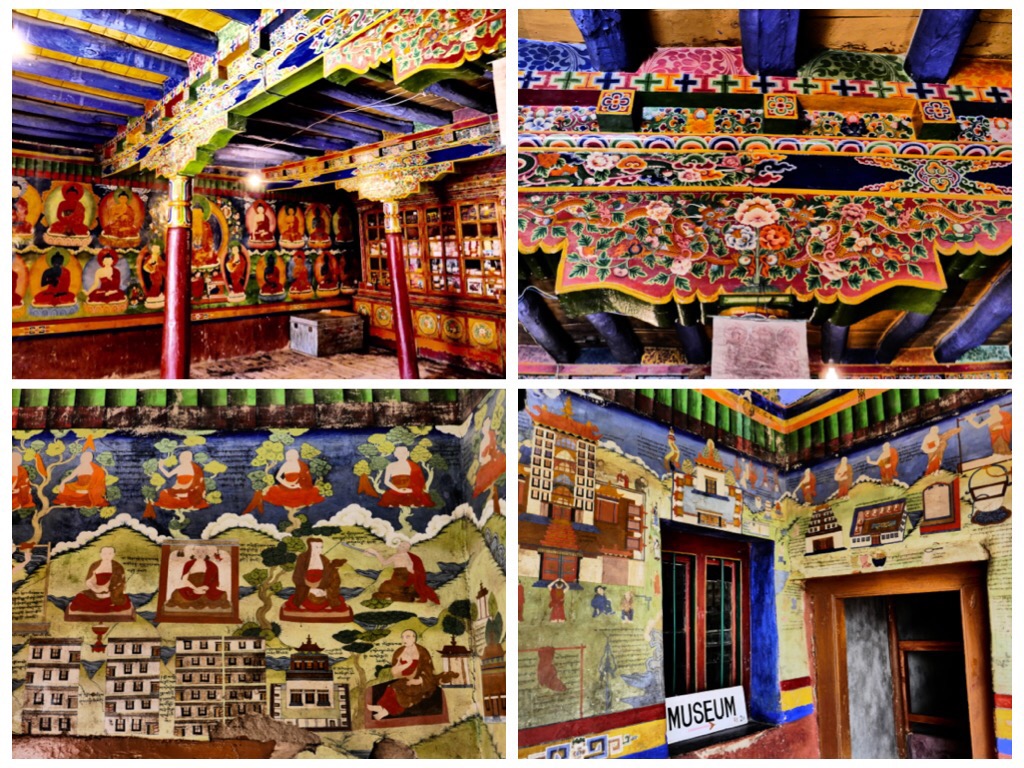 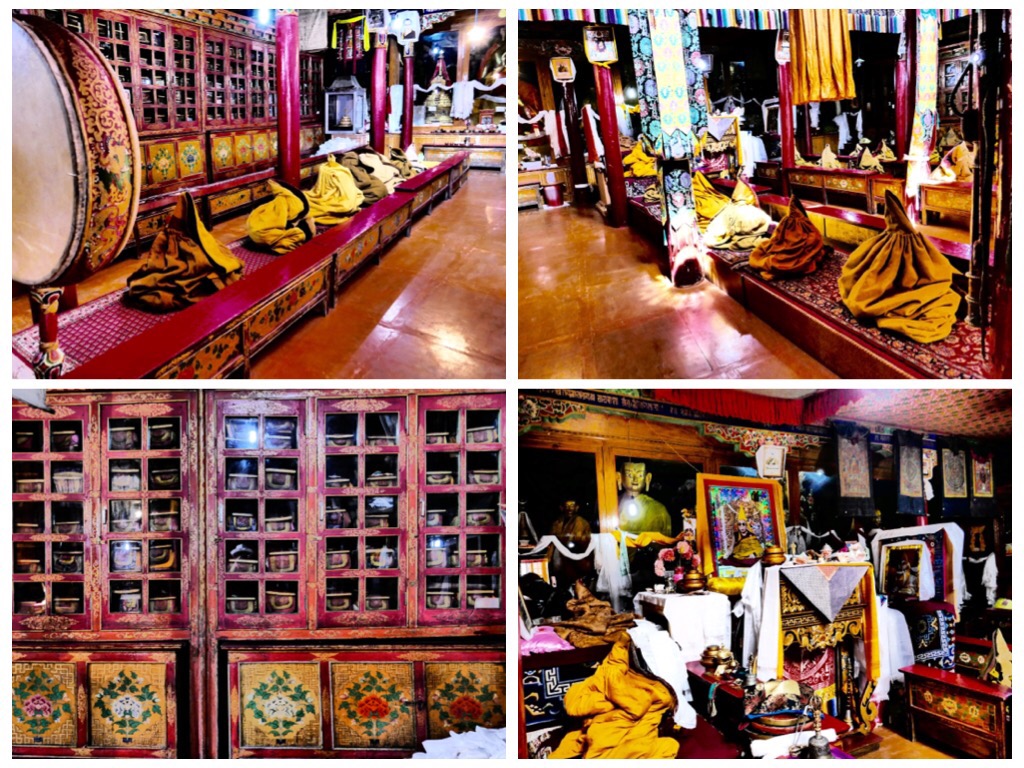 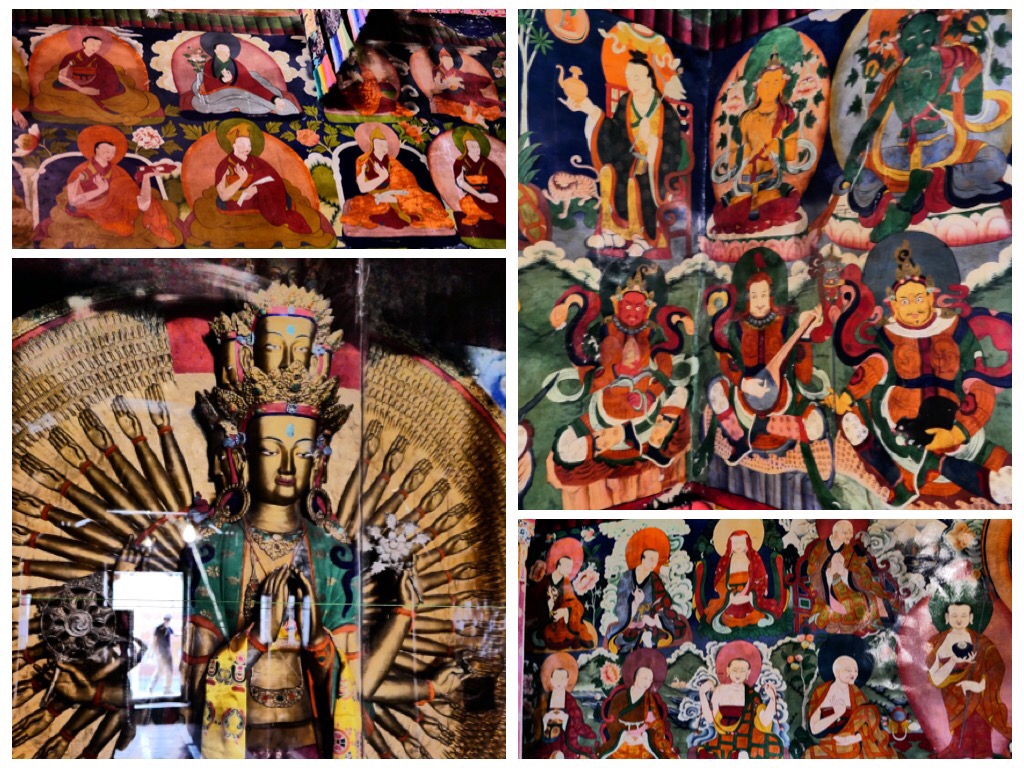 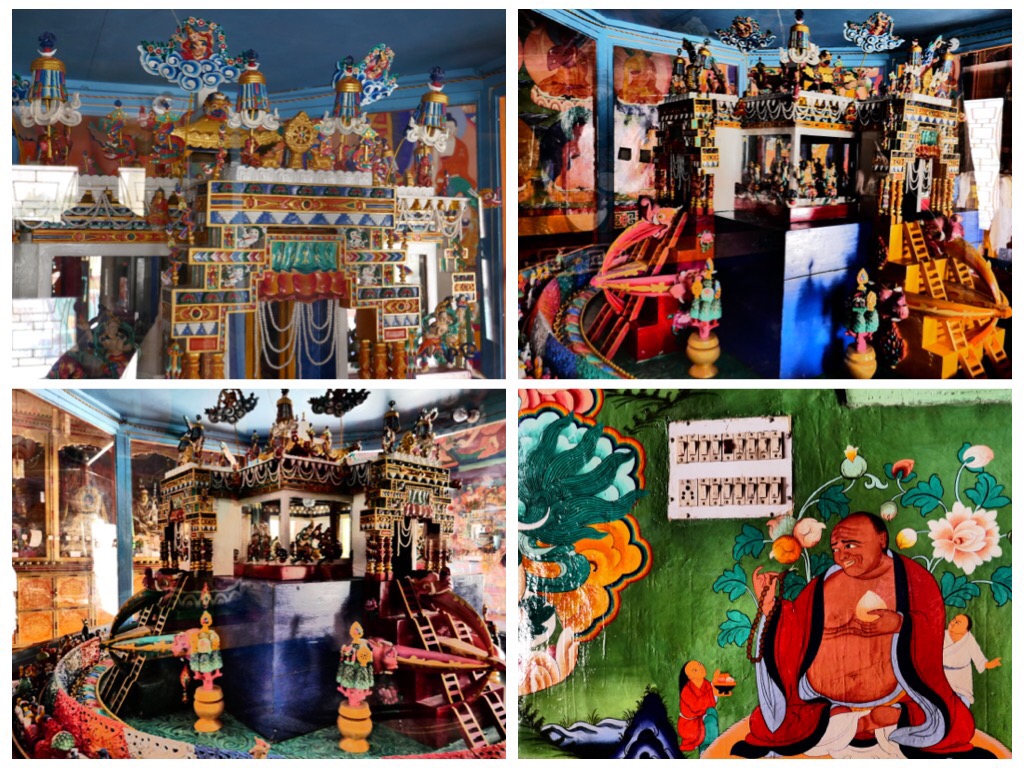 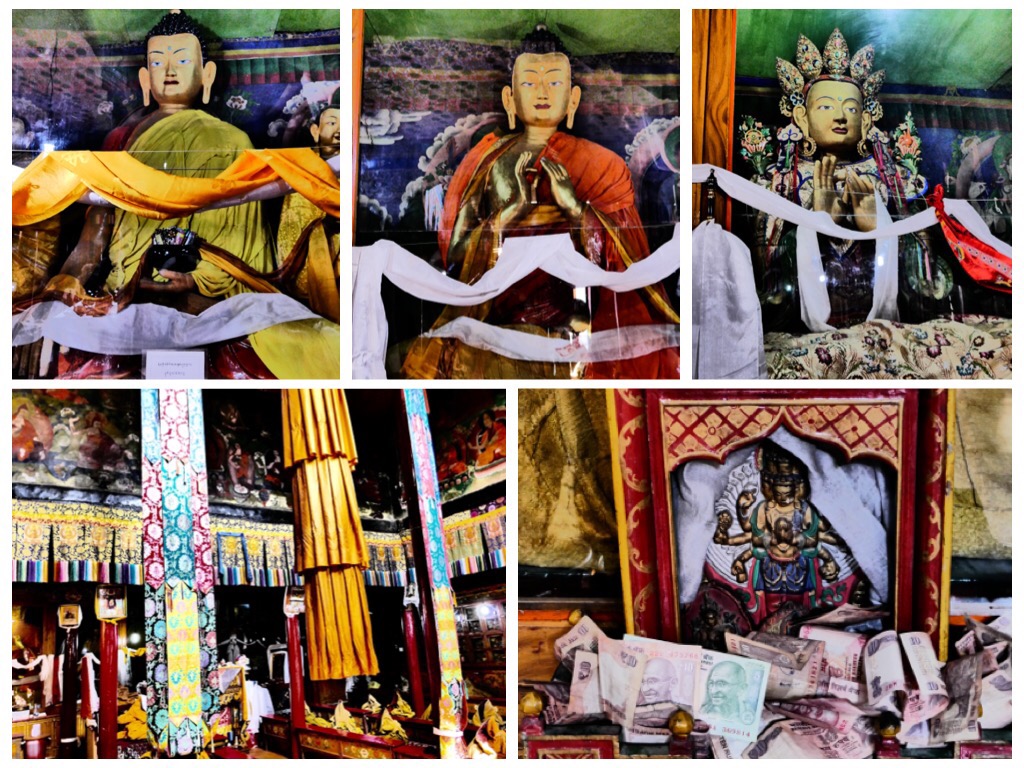 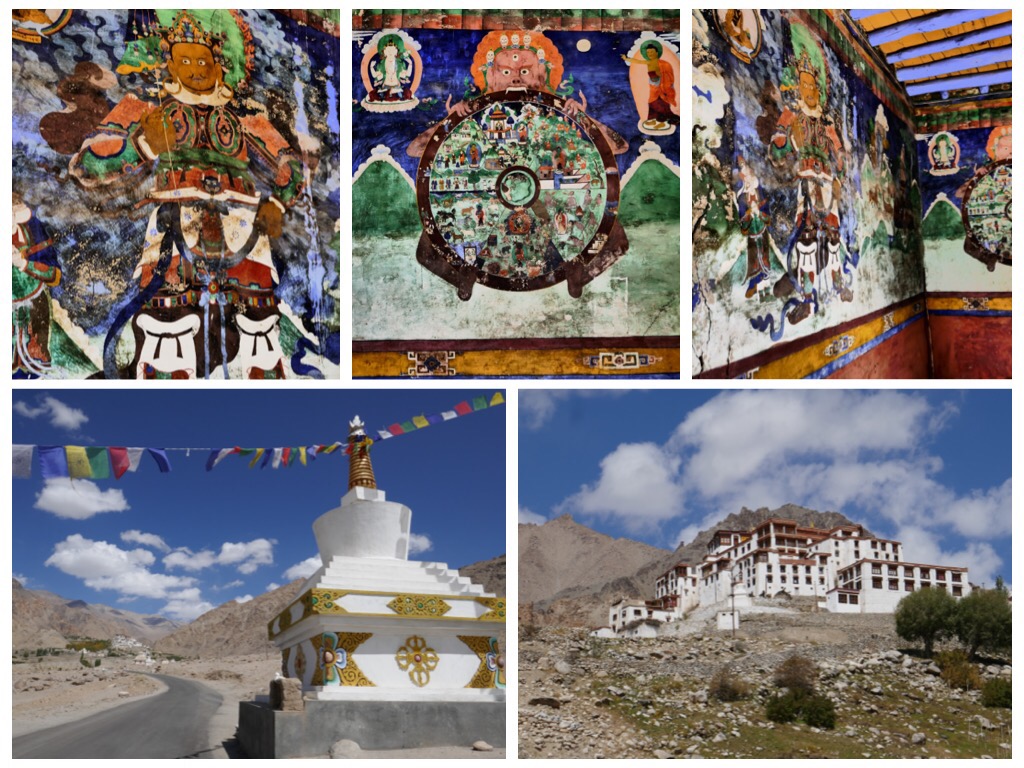 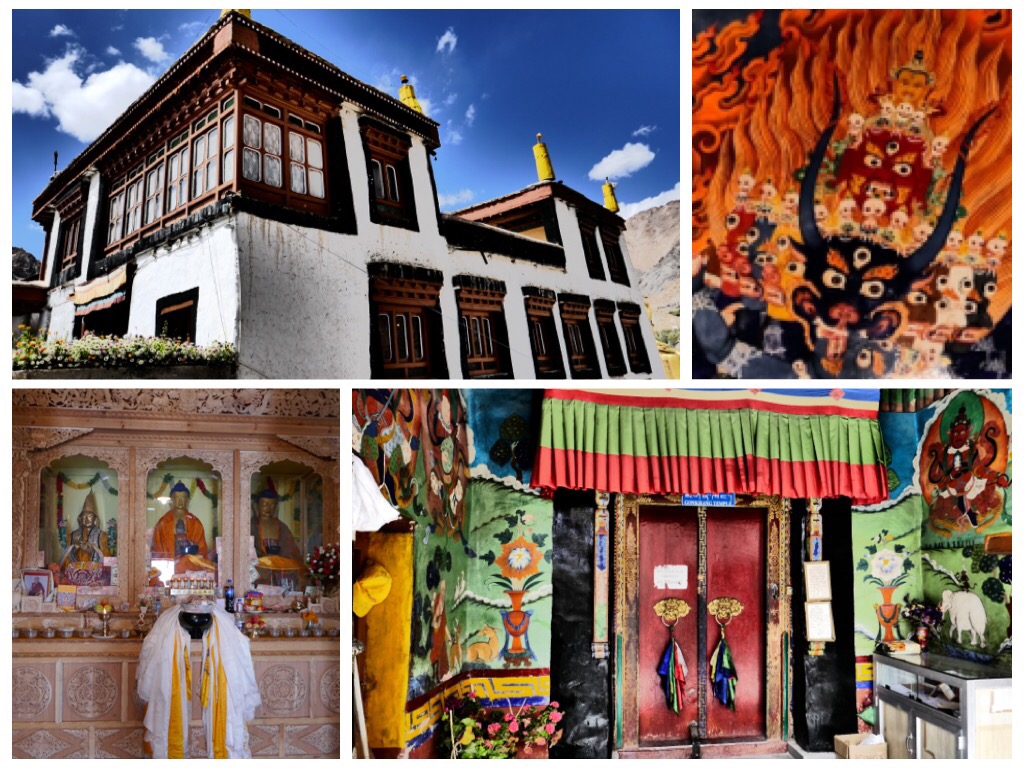 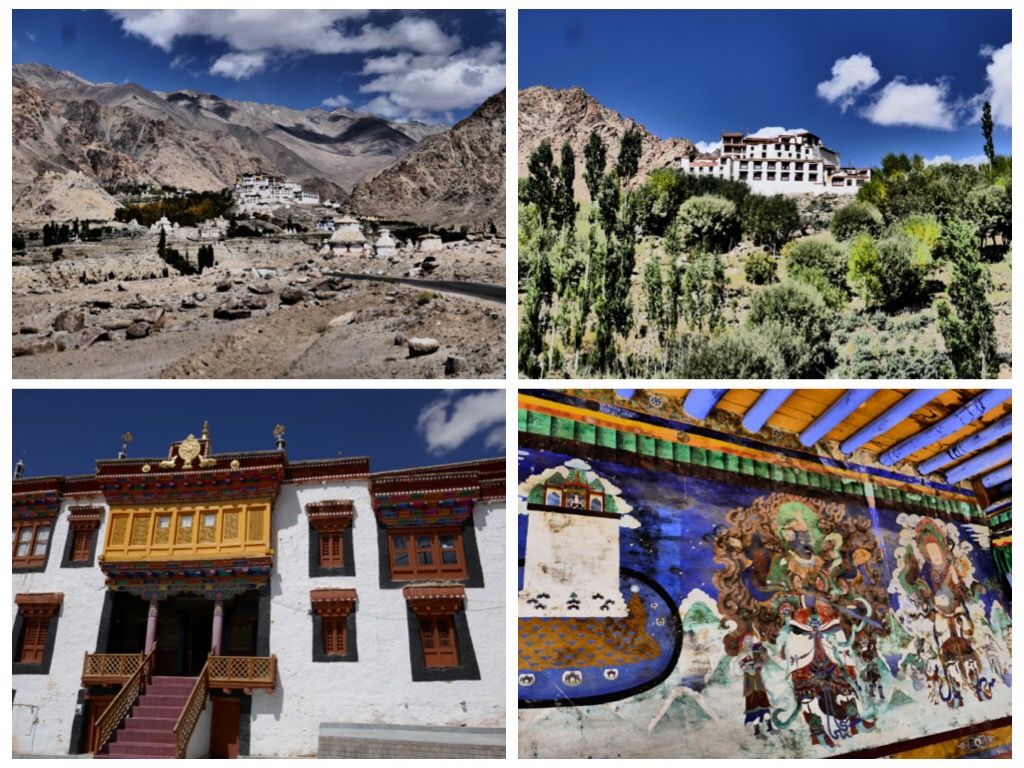 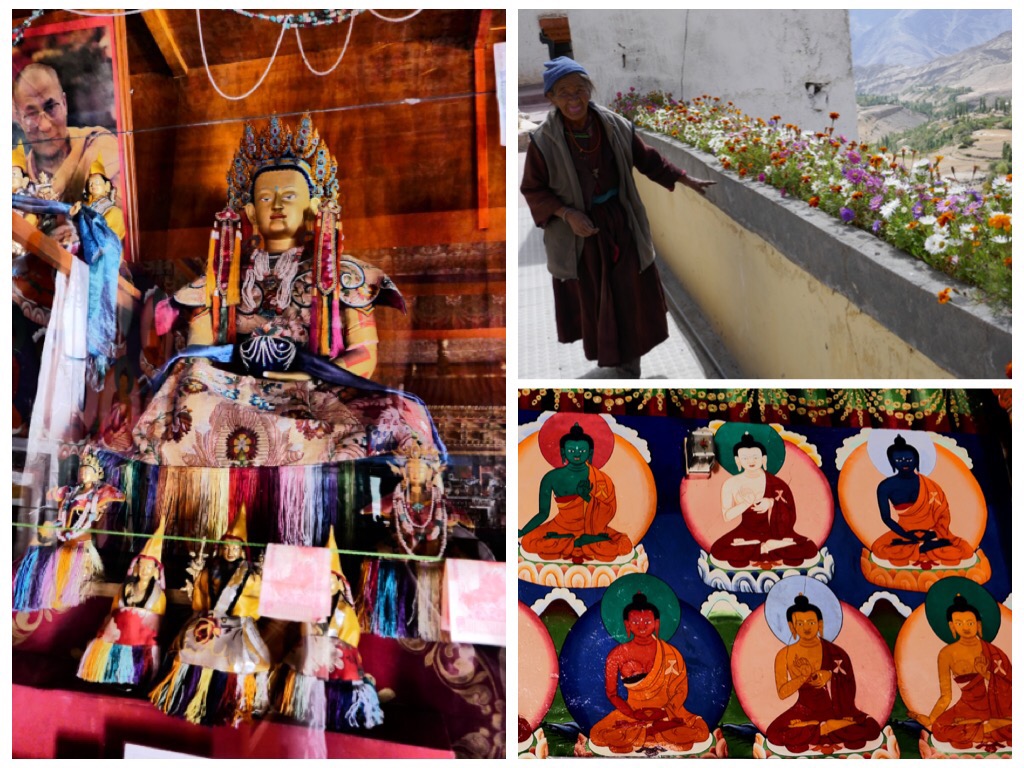 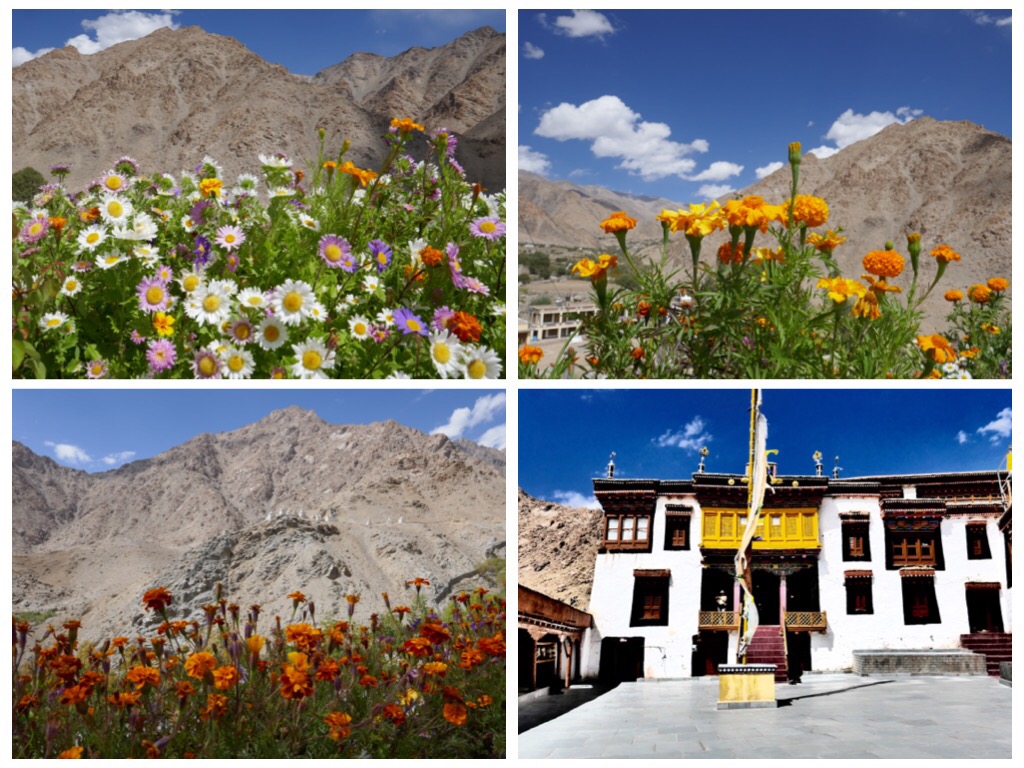 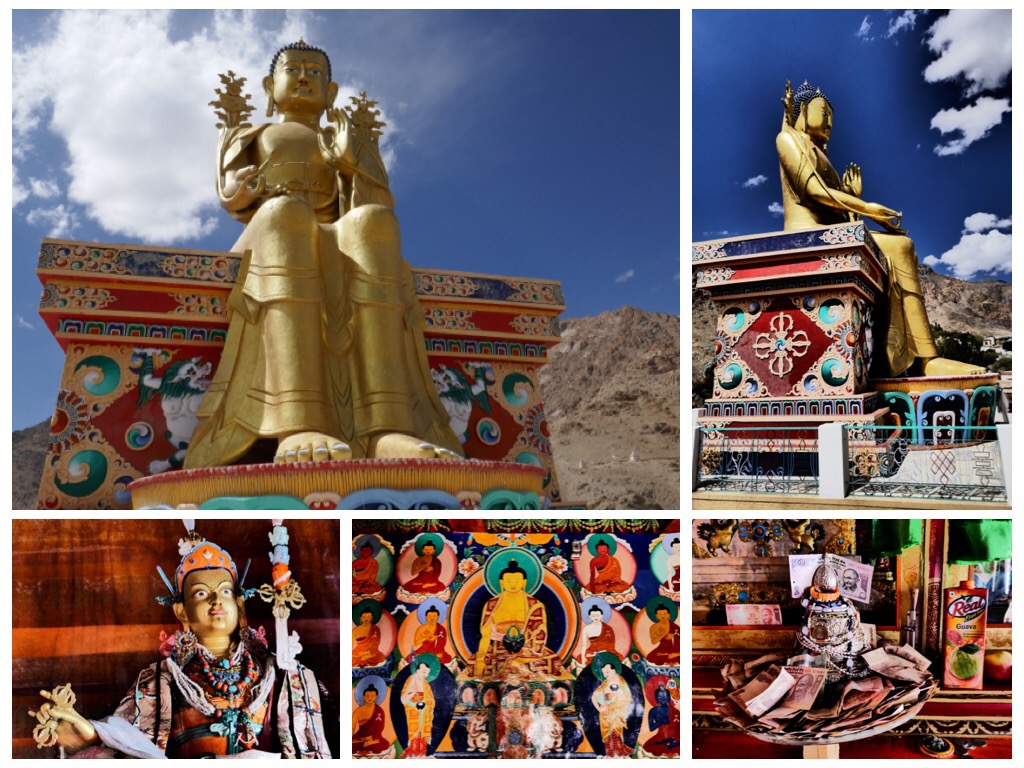 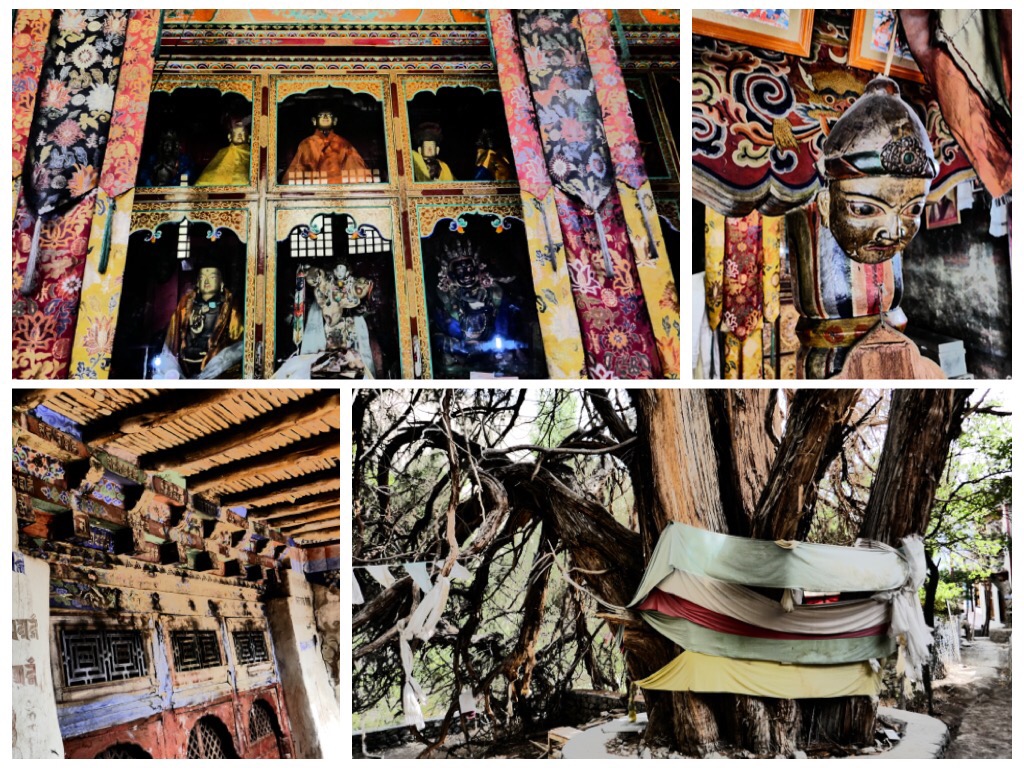 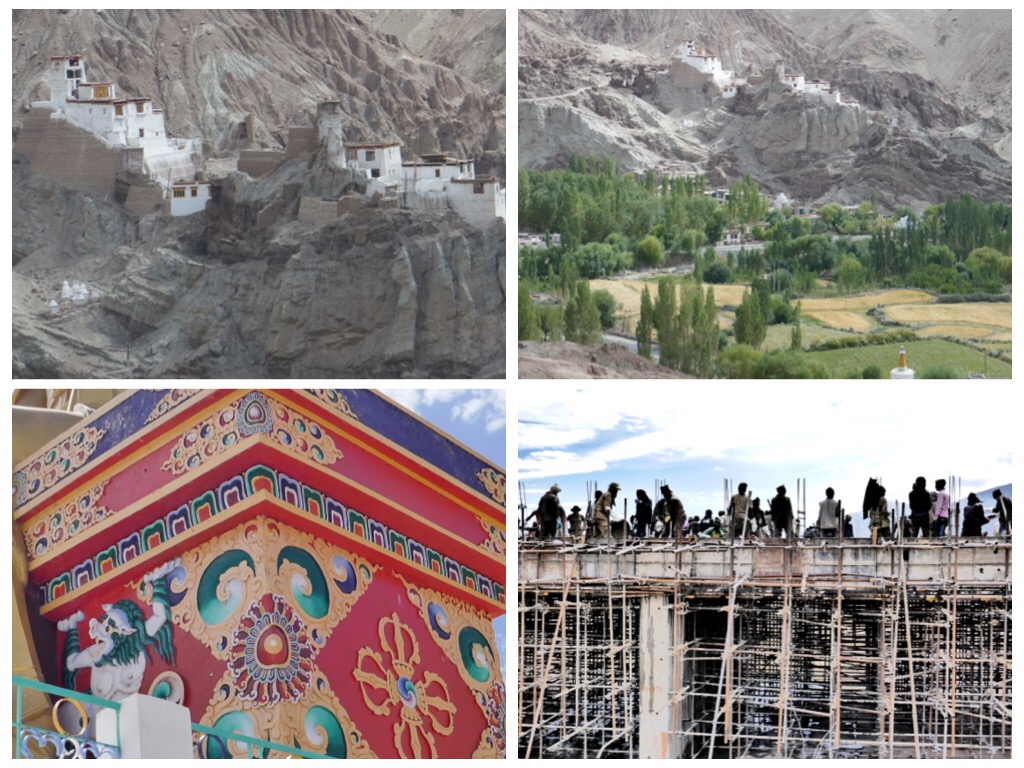 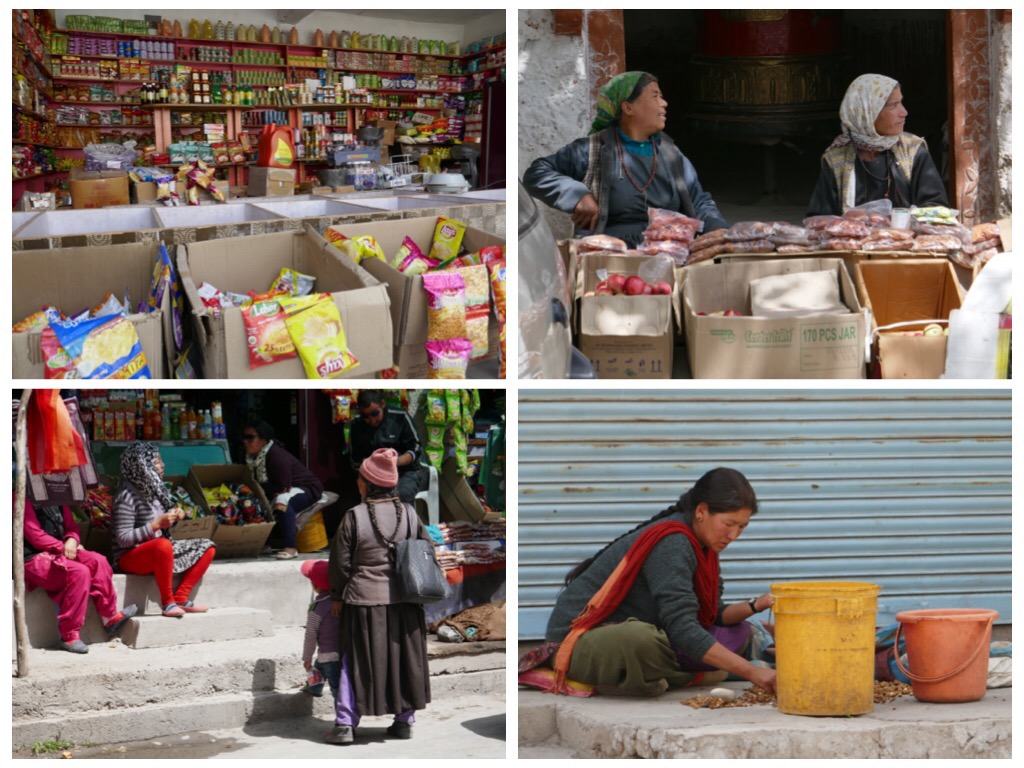 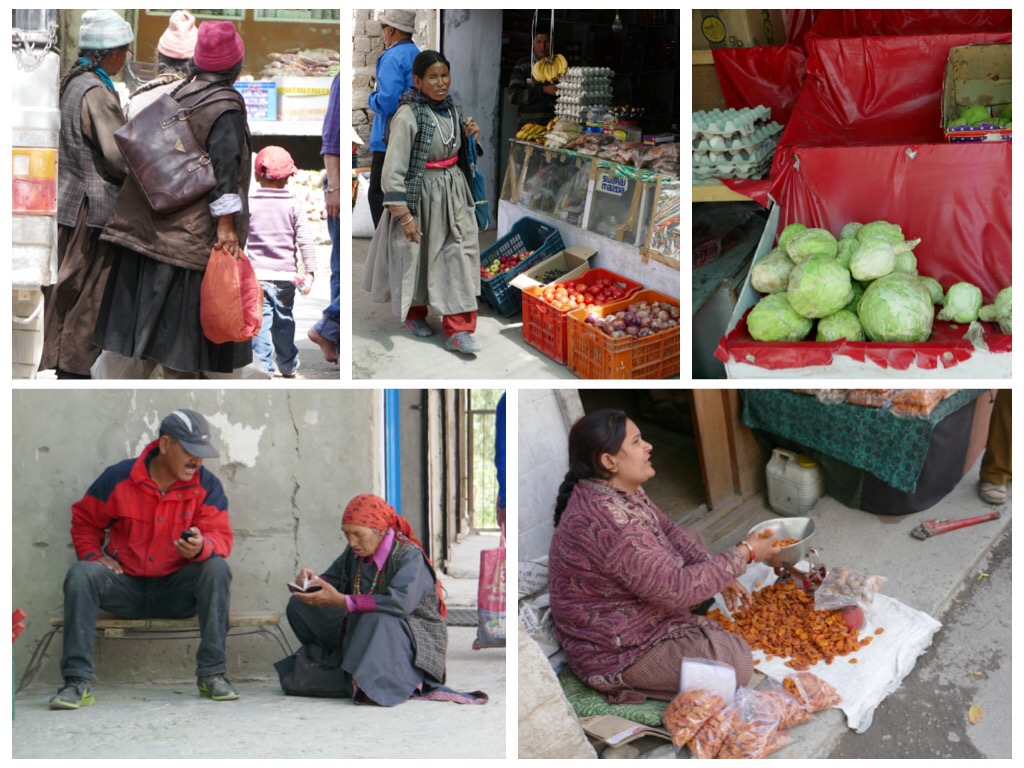 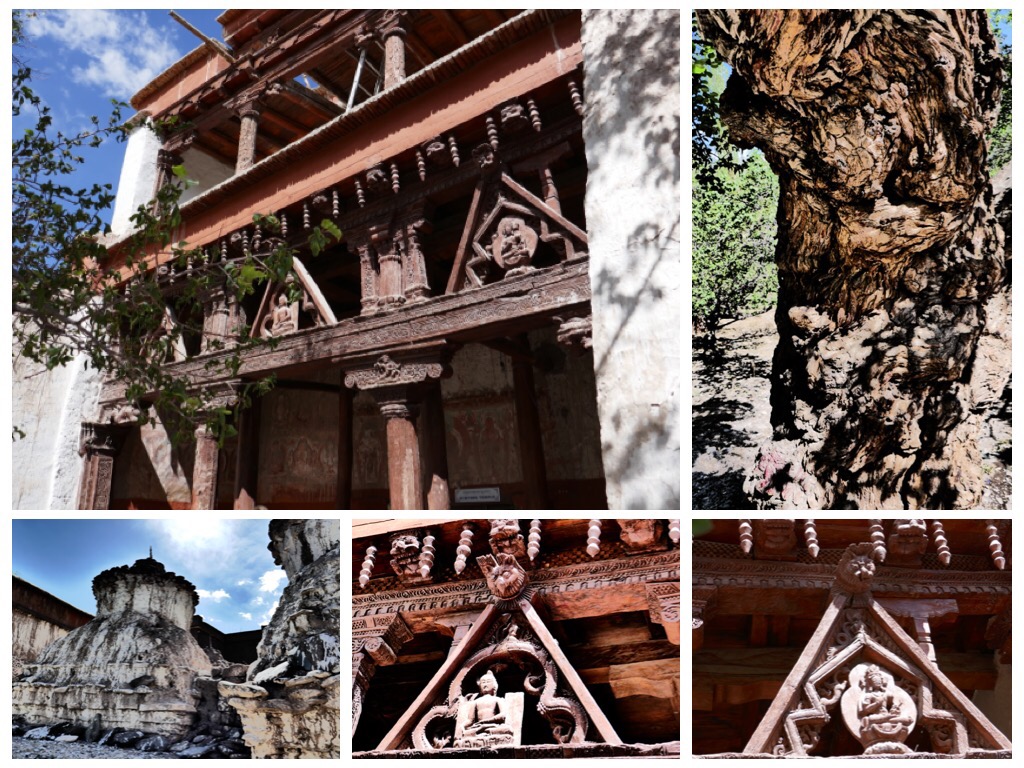 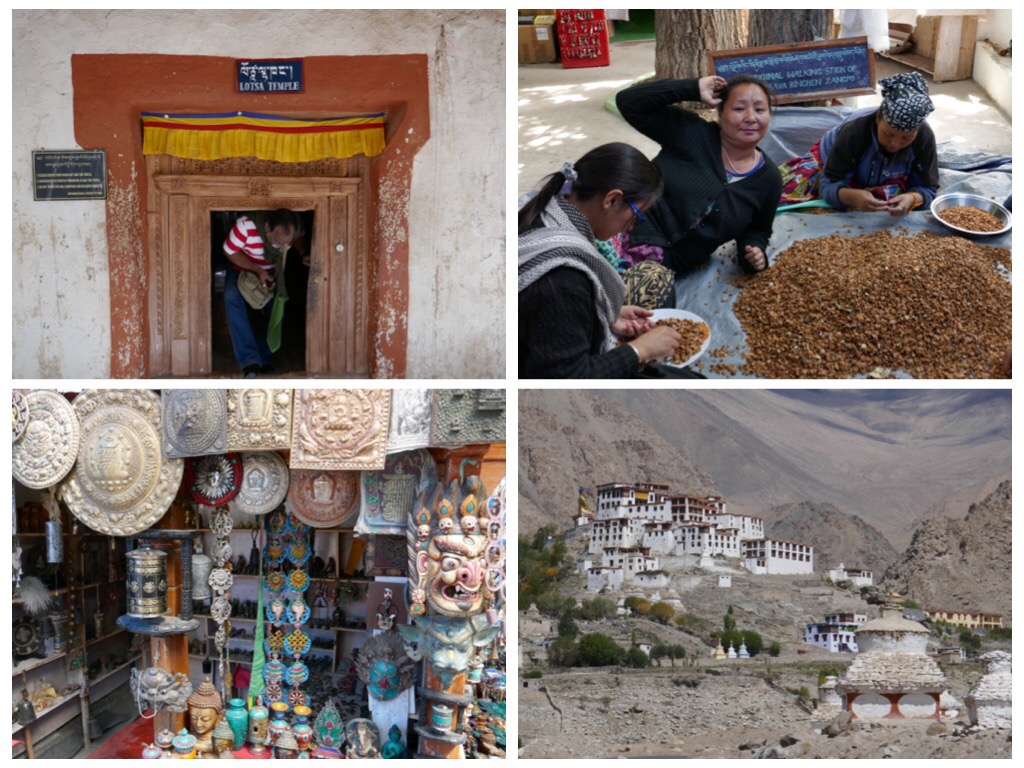 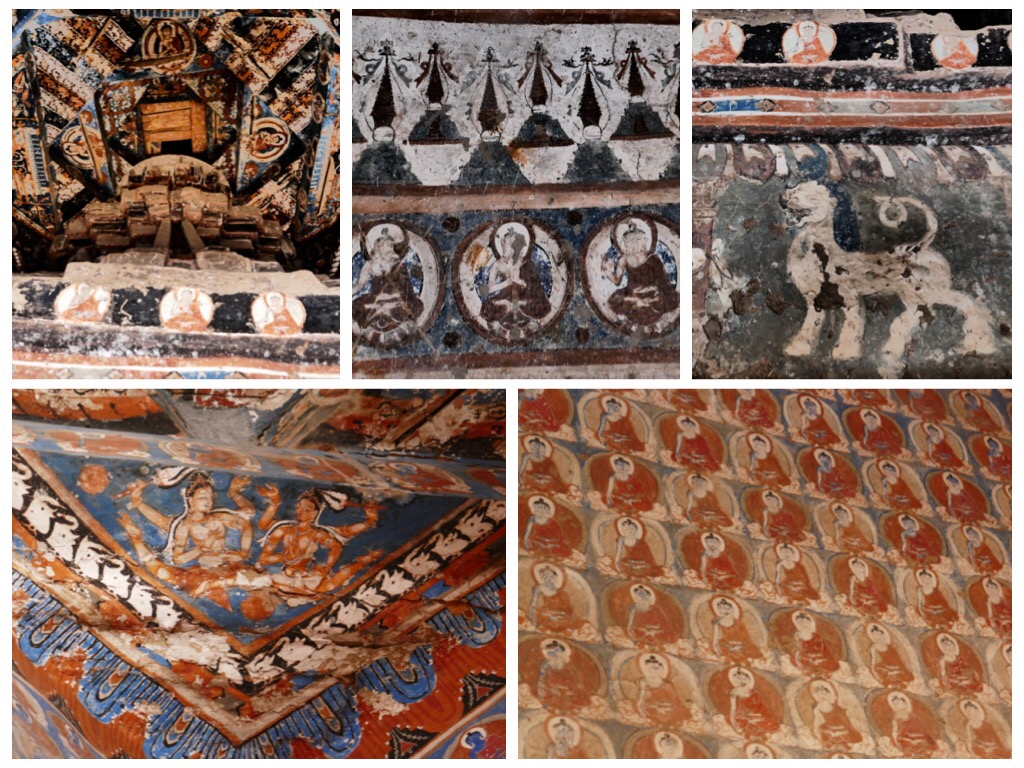 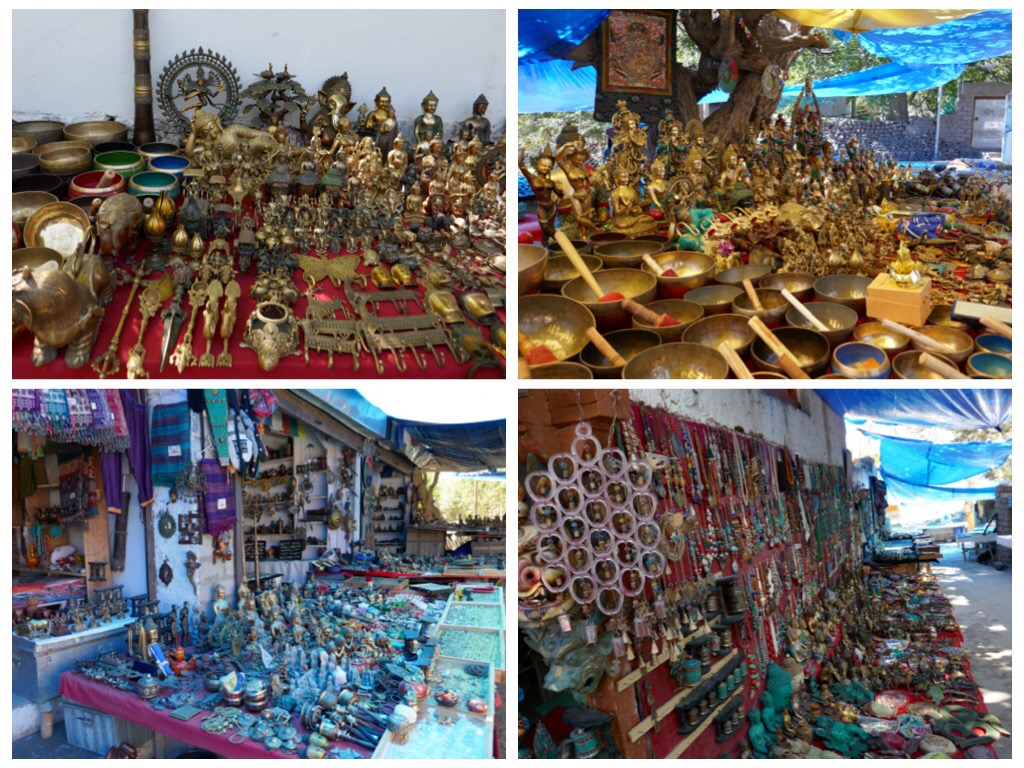 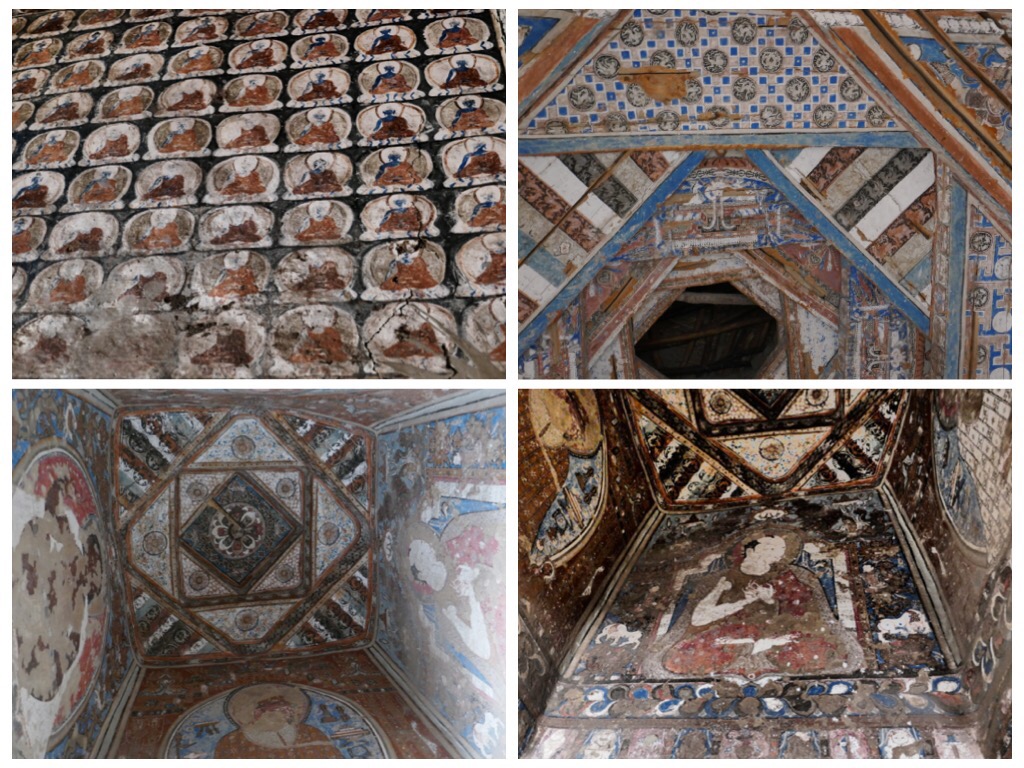 Visiting Alchi, Lixir and Phyang Gompas, and talking with the locals

One morning while we were in Nurla, Wangchuk, the owner of the Apricot Tree hotel, joined us for breakfast.

Wangchuk is a wonderful example of a man who was not limited in any way by the fact that he was born fifty eight years ago in Nurla, a very rural village in Ladakh.

While even today you might see kids with matted hair wearing threadbare clothing living in dusty houses, it does not mean that their destiny is limited.

Wangchuk was born in Nurla, a tiny dusty village in the Himalayas, but he went on to study at a university in Delhi, and further on to a university in Munich, Germany.
He learnt German and has lived in Bavaria for many years.
His mother, a trim and fit woman who is now into her mid eighties, is the reason he came back to Ladakh.

He built this charming hotel on the banks of the Indus River, and has trained the cooks to make better food than is available in many of the simpler eating places in Leh.

Wangchuk said that in the 1980’s, he realized how special Ladakh was and how it had become a hot destination among Europeans.
They came with big, expensive cameras, trying to capture the mystique of this region.
He became a tour guide, guiding groups of Germans on tours of Ladakh.

He said that even now, most of his clients are Germans and other Europeans.
He does not wish to be a snob, but he prefers not to have too many Indian guests.

He said:
“India is changing fast.
People are becoming richer by the day.
But they act like extravagant, nouveau rich.
They drive only BMW 7 series cars, because the 5 series is too small for them.

They buy luxury goods ten pieces at a time, as if money means nothing to them.
Just because they discuss money and drink only Beaujolais wine, it does not mean they have culture nor that they are sophisticated people.
They litter the environment, smoke everywhere, spit and are full of self importance.
They have no humility and are very arrogant.

They might go to enjoy fine dining, but inside they hate it because they do not understand it.
After a fine meal that cost them a fortune, they call home to their mothers saying:
‘Mommy, we are coming home. Please make chapattis and dhal, we are hungry.’

“They of course live with their mothers for life.
Often they live nine family members in one room.
Not because they cannot afford apartments on their own, but because they like living together.
They never have to do the laundry, wash dishes, clean or cook.
They are no more than overgrown little irresponsible kids.

I know that this is a generalization.
I am only talking about the common denominator, below average type.
You know what I mean…”

Wangchuk’s girlfriend Monisha, is Indian.
She is beautiful, with dark, wise eyes and long hair.
She is an Oxford graduate from a very wealthy family, who went on to study textiles at a university in Delhi.

She works at LAMO- Leh Arts and Media Organization, which is located in a beautifully restored mud brick villa, right below the impressive Leh Palace on a steep hill overlooking the town.

She told us about the art scene in Ladakh:
“There not very many artists in Ladakh.
Parents do not understand art and are reluctant to pay to send their kids to study the arts.
They want their children to have a financially secure future.

Thus there are not many artists.
Most are very young, still studying or just graduated.
Their work is good, but not quite there yet.
it is hard to get tourists interested in contemporary art in Ladakh.
They come to see the traditional Buddhist paintings, not a new take from the vision of young artists.
They want to see renditions of tribal people, monasteries, landscapes, and monks in red robes.

We could organize an exhibition of emerging artists in Mumbai, but the local artists’ work is not yet ready for it.
The art world can be harsh and very unforgiving.
If we expose those young and still developing talents to the harsh critics in the big city, they might say, “What is this? This is not much,” and this might ruin the young artists’ future.”

Monisha loves the local culture and works tirelessly to advance it, but she also has a sobering attitude about the tourists who come to Ladakh, glamorizing the old monastic life and refusing to see that this is a vibrant living culture, one that wishes to enter the twenty first century.

She said:
“No disrespect intended, but the Dalai Lama is the biggest PR person on earth, or he has the best PR organization behind him, much better than the Pope’s.
Tourists are so in love with the “Tibetan Cause,” that they are blind to what goes on behind the surface.

I am not denying that the Chinese occupation of Tibet is a cruel and horrendous injustice with many terrible casualties, but that does not mean that the Tibetan culture needs to be blindly glamorized.

There are many injustices within this culture.
Take the treatment of women in the Lamaseries.
Women cannot rise to equal position in the religion, just like it is in the Christian, Jewish and Muslim religions.
There are also stories of physical abuse and beatings in the monasteries along with sexual abuse and cruelties that are being hushed up, as they are in the Catholic Christian schools.”

Monisha continued:
“Take for example the treatment of some artists.
You know that the old traditional Buddhist paintings do not encourage the individual creativity of the artist, because they are NOT really about art.
Painting those paintings is a form of worship, an offering and a meditation.
This is why the artist has to follow an exact way of measuring the distance between the Buddha’s eyes, mouth, or the exact size of the hat or nose of Padmasambhava.

There is very little tolerance of artists who try to add their own spin to their renditions of the traditional paintings.
A famous Tibetan artist tried to add his own vision and criticism of the culture, by making a mandala of the Dalai Lama, and he was completely ostracized.
Those who write books about the cruelty in the monasteries that they grew up in, are ostracized and their books are banned from all Tibetan circles and bookstores.”

Monisha is correct in her observations.
The measure of democracy is no doubt the ability of a culture to criticize itself.
People around the world think that the USA is full of horrendous injustices, but this is only because of the continuous influx of documentaries exposing many of these injustices .
Other cultures are also full of heartbreaking stories, corruption, mistreatment of power and cruel injustices, but those who dare to bring it to the surface, are prosecuted immediately or are otherwise silenced before they can raise even a bit of awareness.

There is a famous joke in India about the prevalent corruption that plagues the country.
The only reason corruption is not stopped is because it does not only occur in the realm of politics, it is the grease that moves daily life.
I was told that in many cities, you cannot get phone or electricity hookups quickly unless you grease the hands of those in office with money.
If you don’t, your application gets buried down the line.

The joke tells about a man from Varanasi (Benares) who died and went to Heaven.
There, in a lavishly decorated office, he meets God.
On the walls of the office, there are clocks which the man thought indicated the time in different time zones of the earth, but the clocks were moving at different speeds, some of them very, very fast, while others were ticking slower.

The man asked God about the clocks.
God answered that those clocks indicated the level of corruption in each city in India.
Those that are moving faster indicate higher levels of corruption than those which are moving slower.

The man then noticed the names of the cities under each clock, and to his chagrin, he sighed in agreement.
Then he noticed that there was no clock for Varanasi on the wall.
He asked God, “Where is the clock for Varanasi? Have you forgotten about our holy city?”

God brushed his hair with his large hand, fidgeted his fingers and twirled his toes in discomfort and said:
“Oh… Varanasi, the clock was moving SO FAST, that I installed it in my bedroom as a ceiling fan.”

On a sunny and hot day, we drove to see the old Alchi (founded 1000AD) monastery with its beautiful small halls.
The walls of Alchi Gompa are painted with beautiful Buddhist paintings and the old Chortens (stupas) are painted inside with intricate patterns.

It is the most visited Gompa by tourists, with about seven hundred cars arriving daily.
Around the Gompa, there are many stalls of traders selling Tibetan Buddhist artifacts.

Likir Monastery is located a short drive up the road from Alchi.
The monastery has two assembly halls, known as Dukhangs.

The older hall at the central courtyard, has six rows of seats for the lamas and a throne for the Head Lama of Likir.

The Dukhangs contains statues of Bodhisatva, Amitabha, three large statues of Sakyamuni, Maitreya and Tsong Khapa, the founder of the yellow-hat sect.

The newer Dukhang is about 200 years old, and it contains a statue of Avalokitvara with 1000 arms and 11 heads.

Phyang monastery was established in 1515. and it contains numerous sacred shrines inside the monastery, frescoes dating from the royal period, and a 900-year-old museum which has an extensive collection of images including a number of fine Kashmiri bronzes probably dating to the 14th century

That day we ate a very late lunch in the village of Khalsi, in a garden restaurant with dubious hygiene which advertised Israeli, Tibetan and Indian food.
In the early evening, back in our hotel in Nurla, we checked our emails with the incredibly slow internet surrounded by dozens of flies, while our driver, the receptionist and his friend, watched action Bollywood movies with great delight.

That night I had a vivid dream.
I dreamt that a golden naked man with real gold skin, was jumping on top on the steep mountains in front of our room.

I was mystified….. But then I remembered that in most Buddhist paintings and sculptures, the image of the Buddha, the God within each of us which we all strive to become, is depicted in gold colors.
We strive to become pure, good, loving, holy and golden like the Buddha that is our very own core…

← Julley from Nurla, Ladakh
Lazying in Leh, and Yak Cheese Pizza in Ladakh →