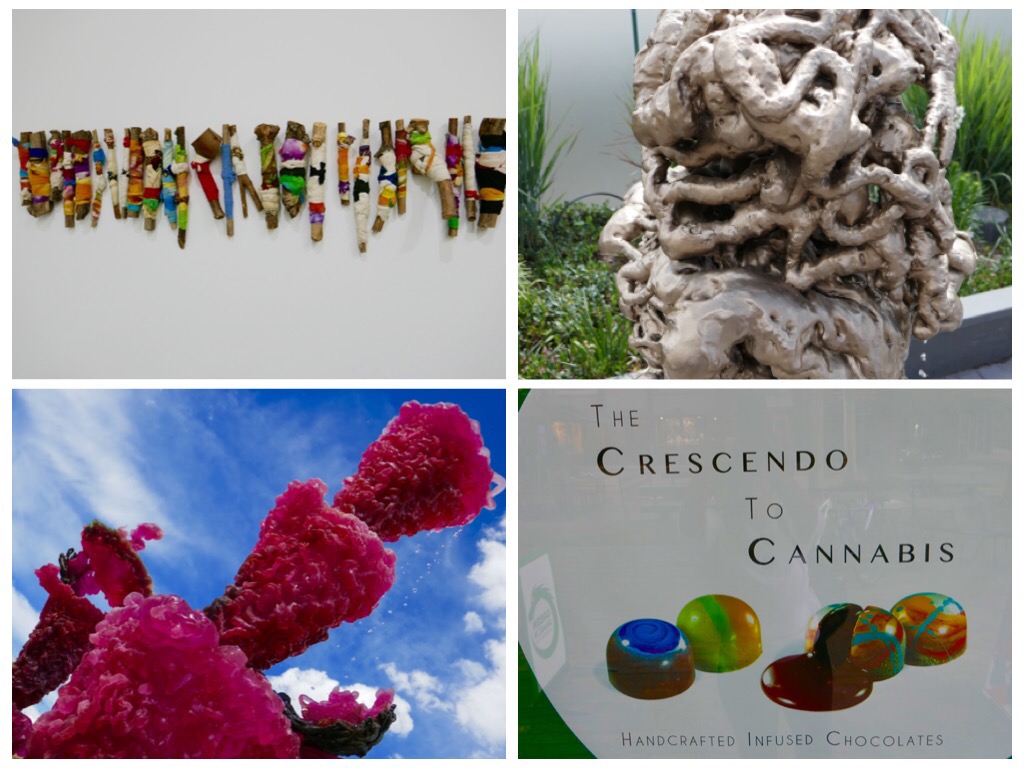 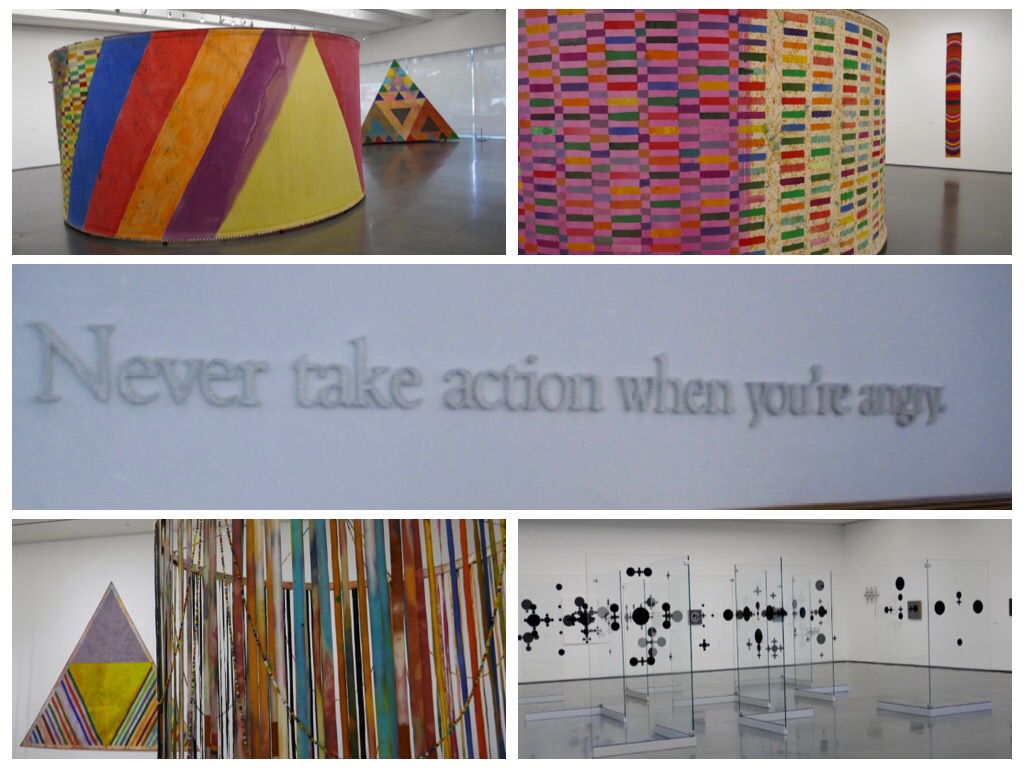 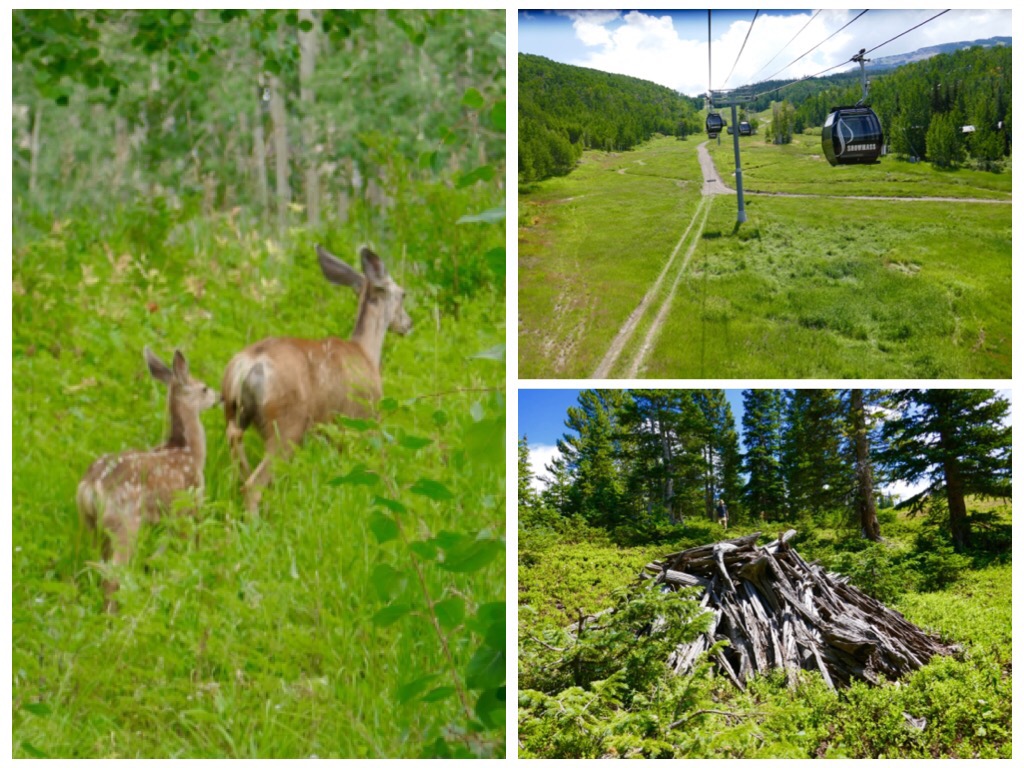 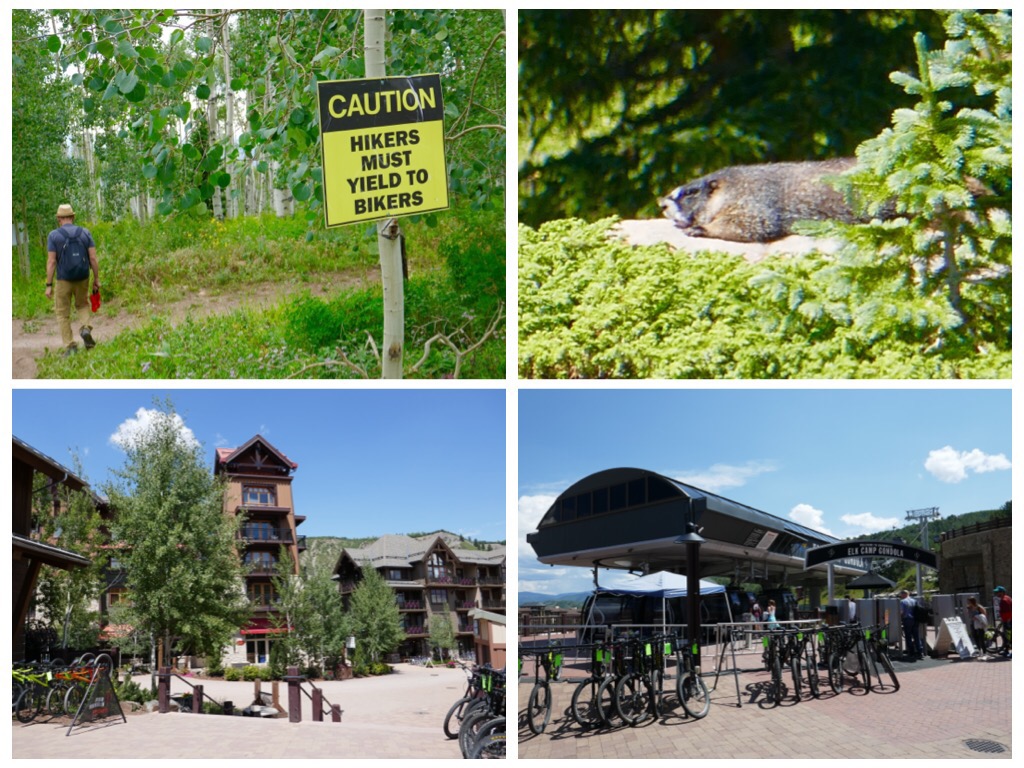 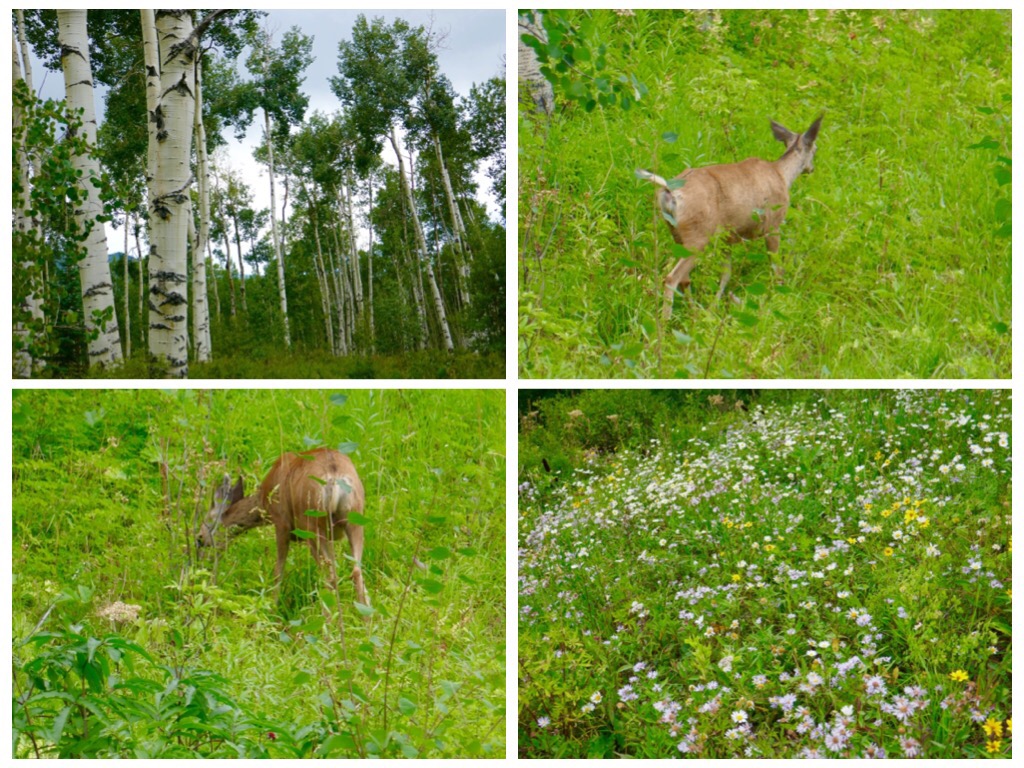 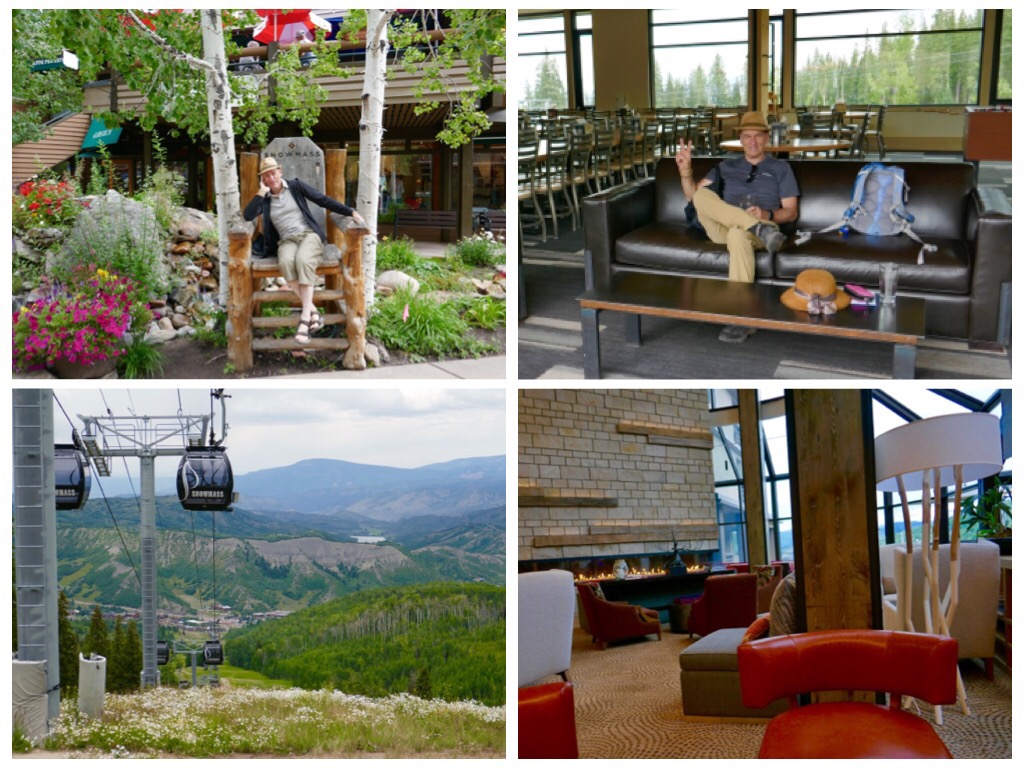 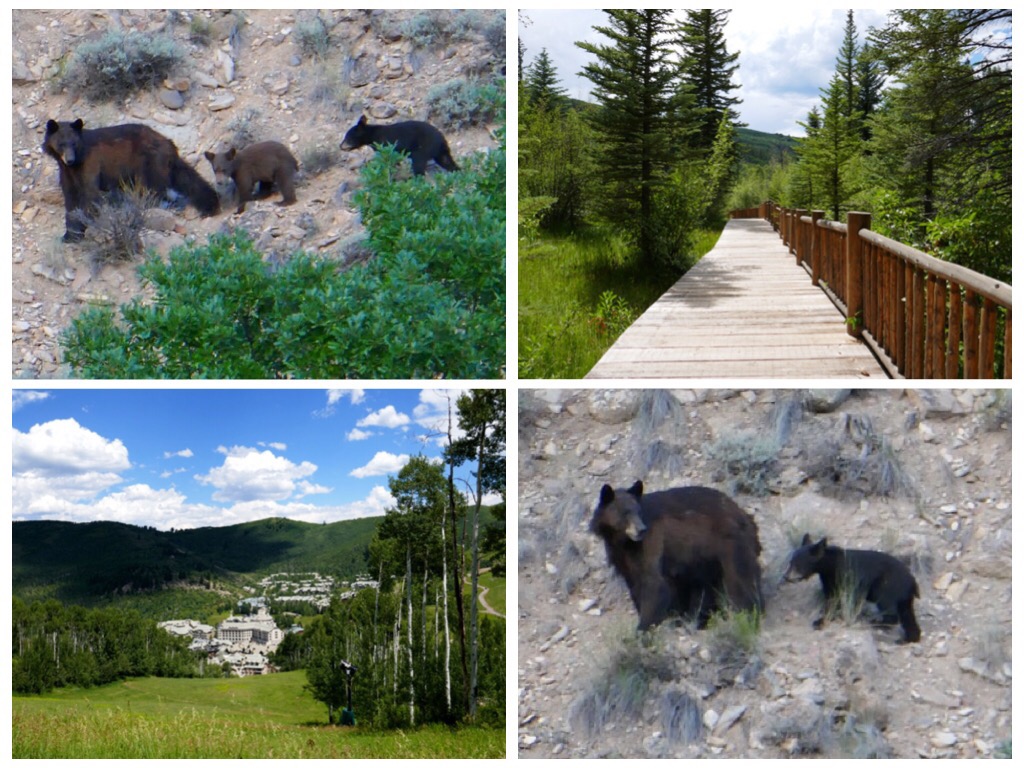 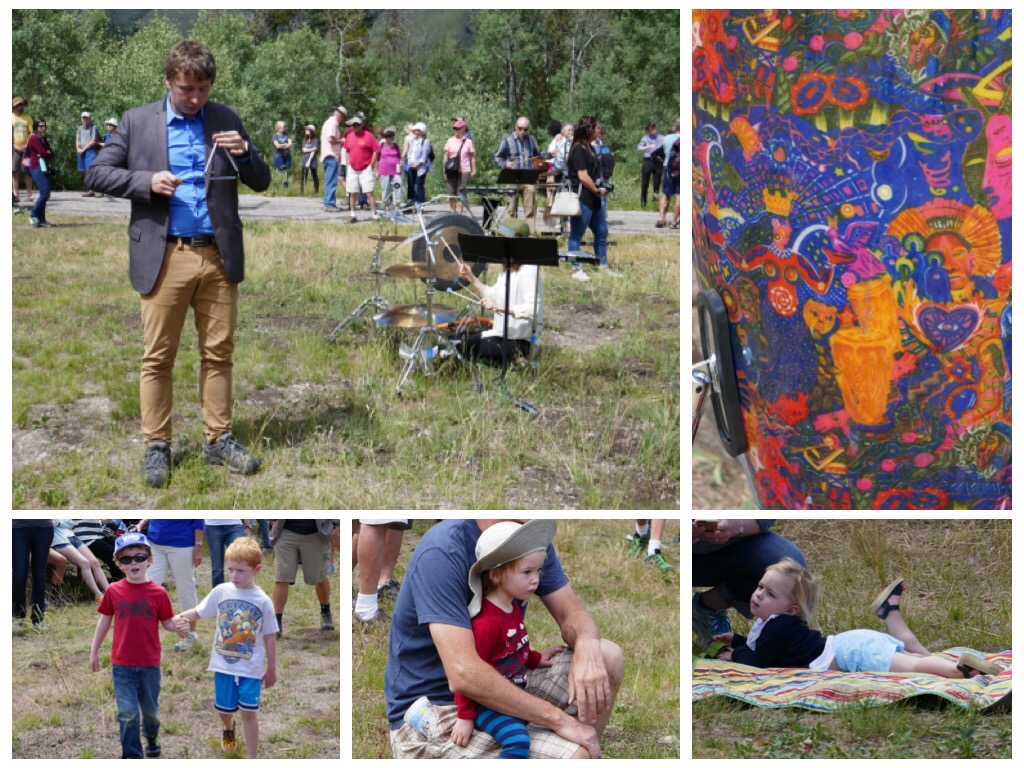 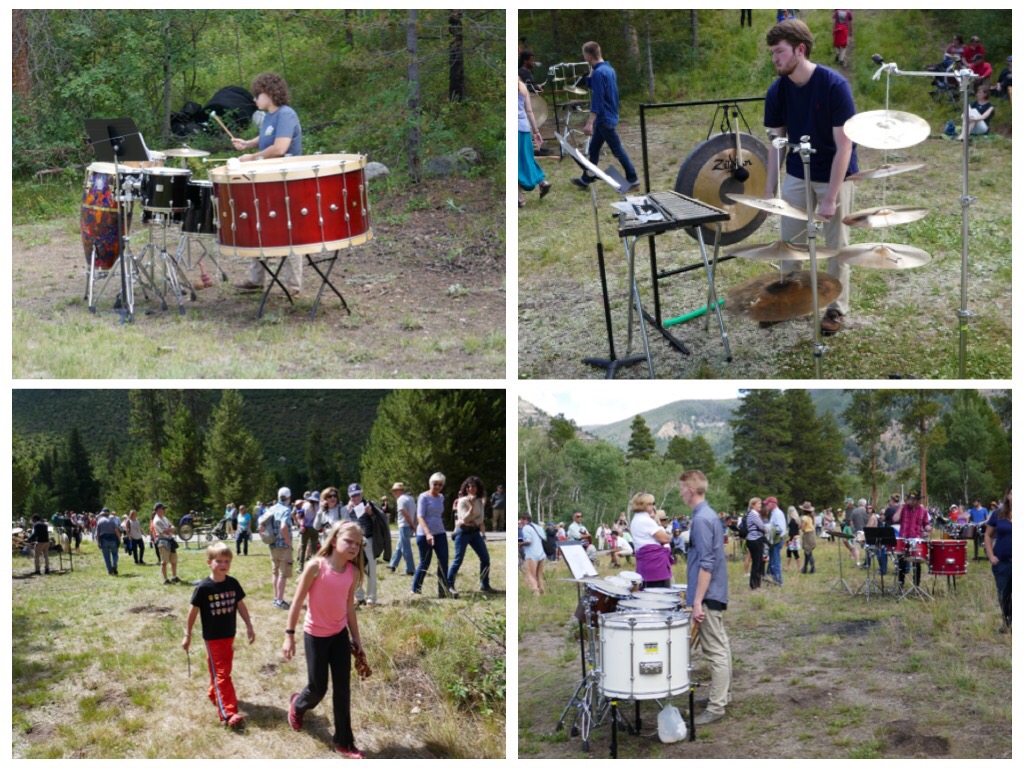 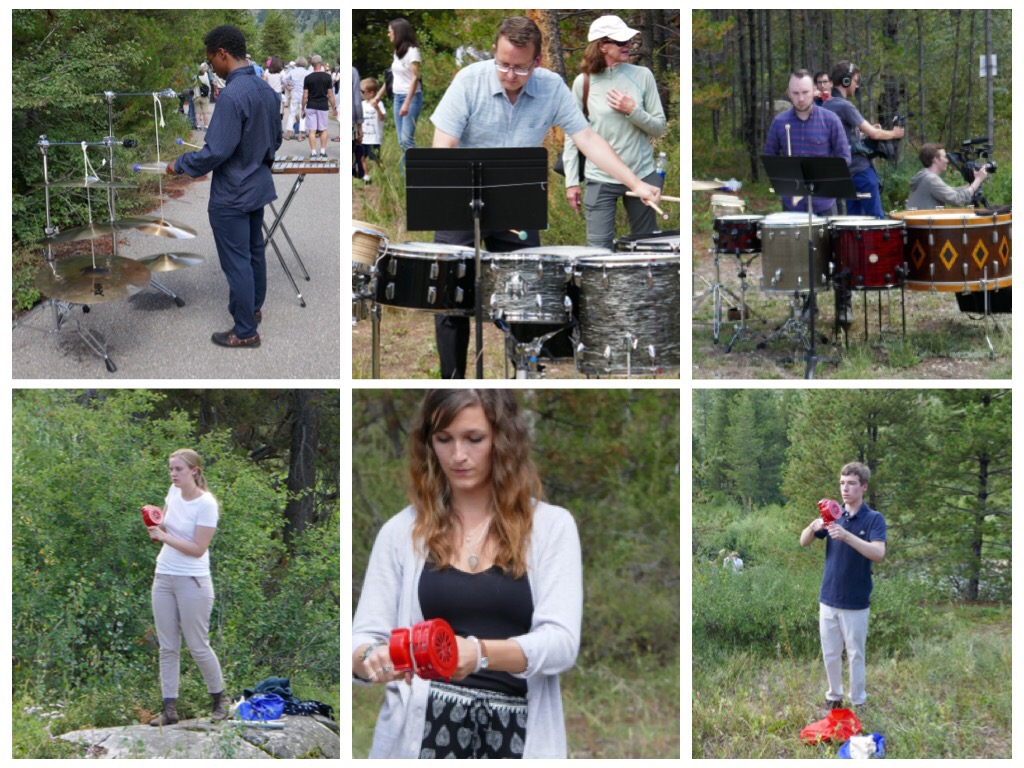 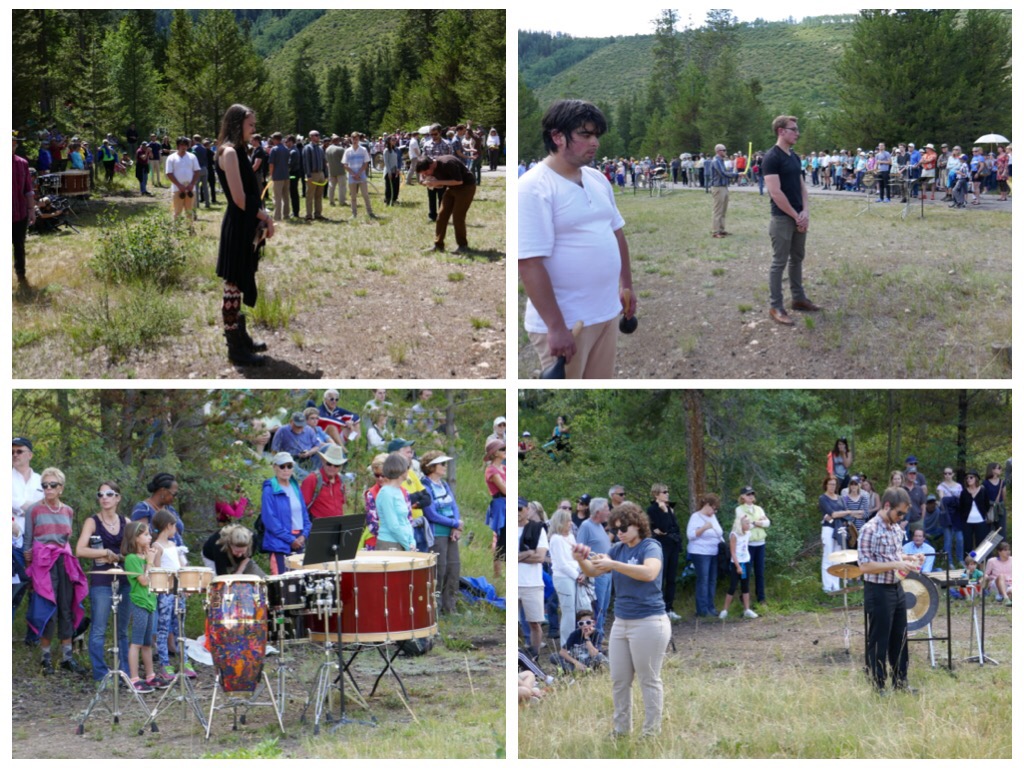 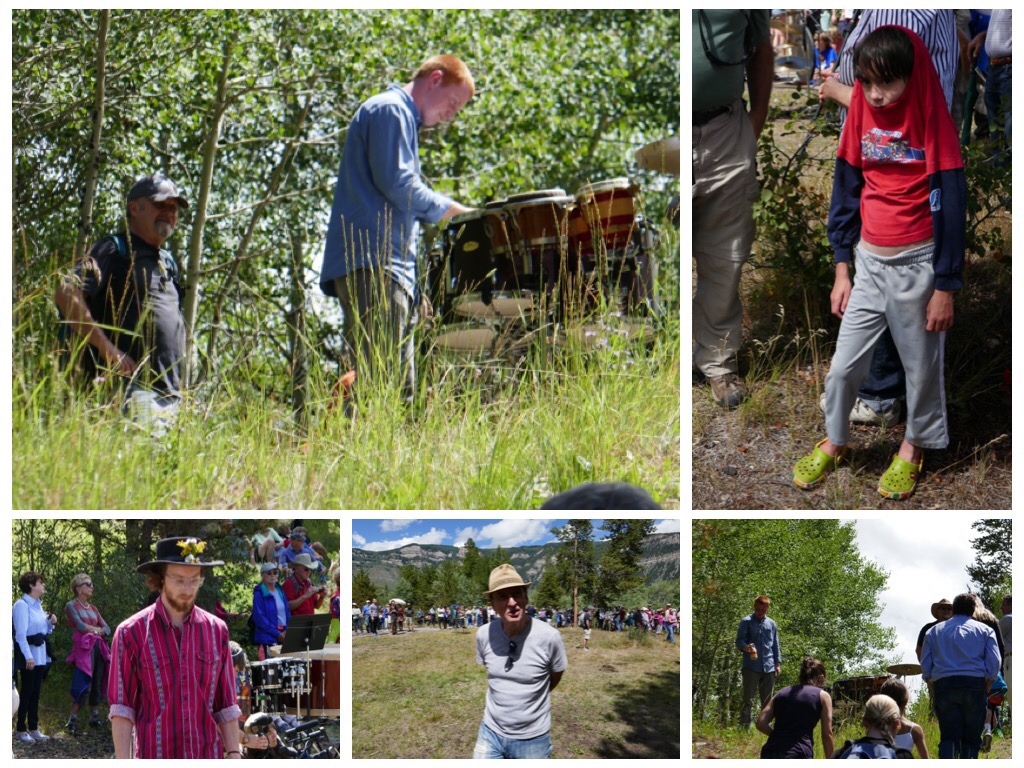 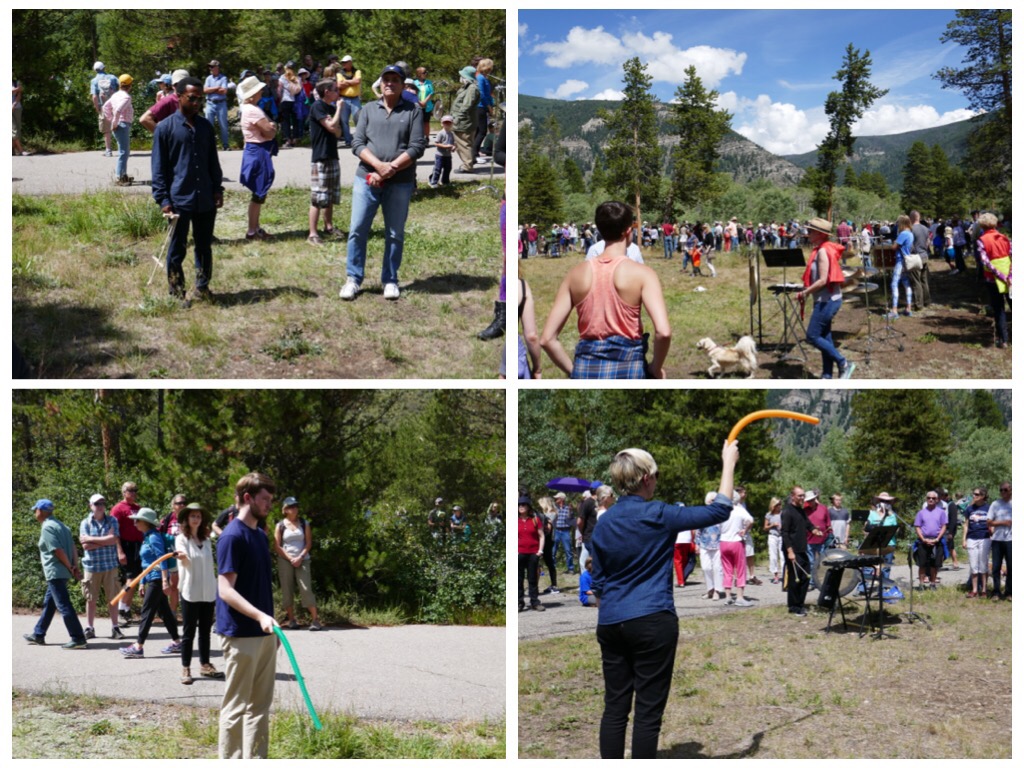 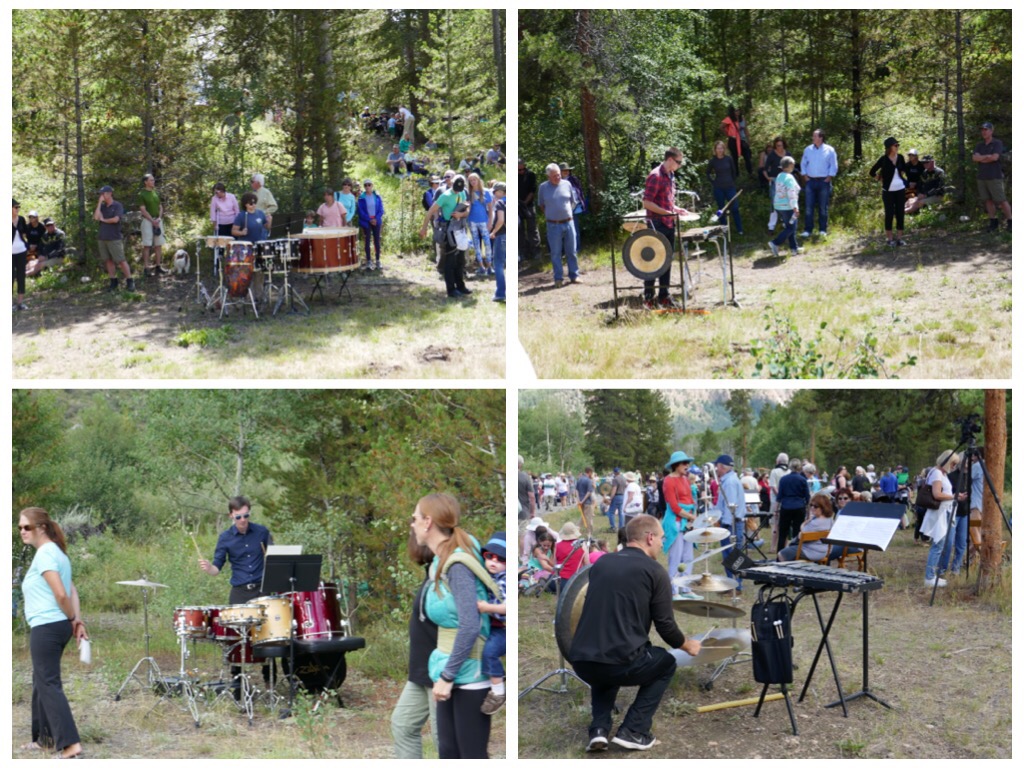 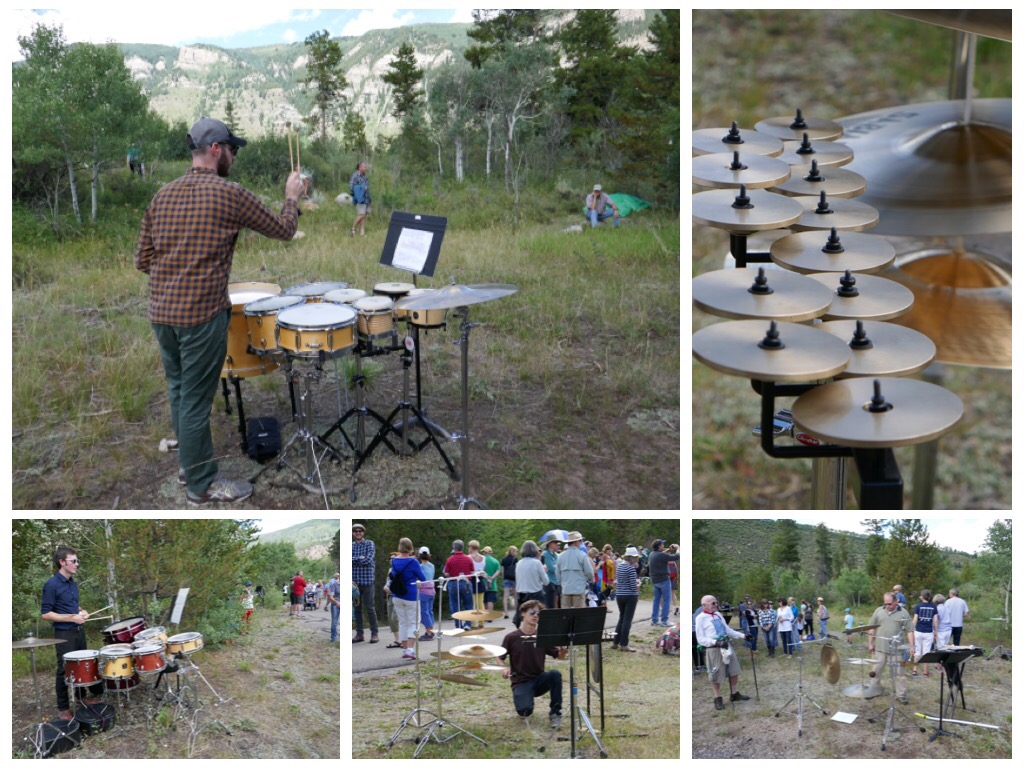 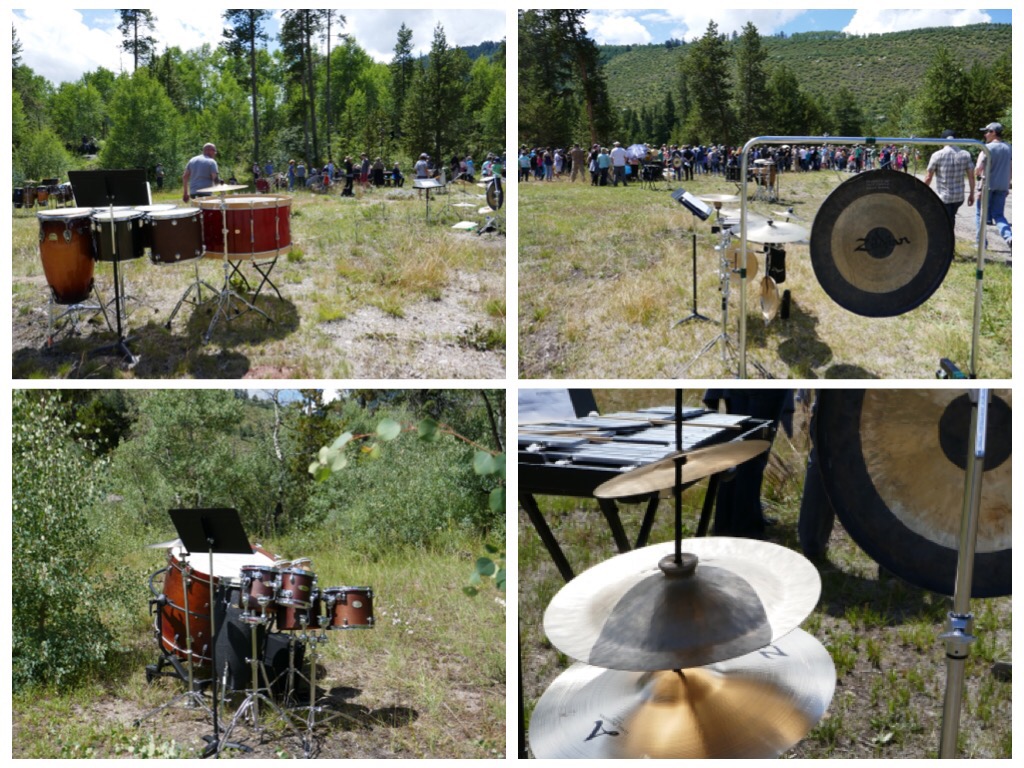 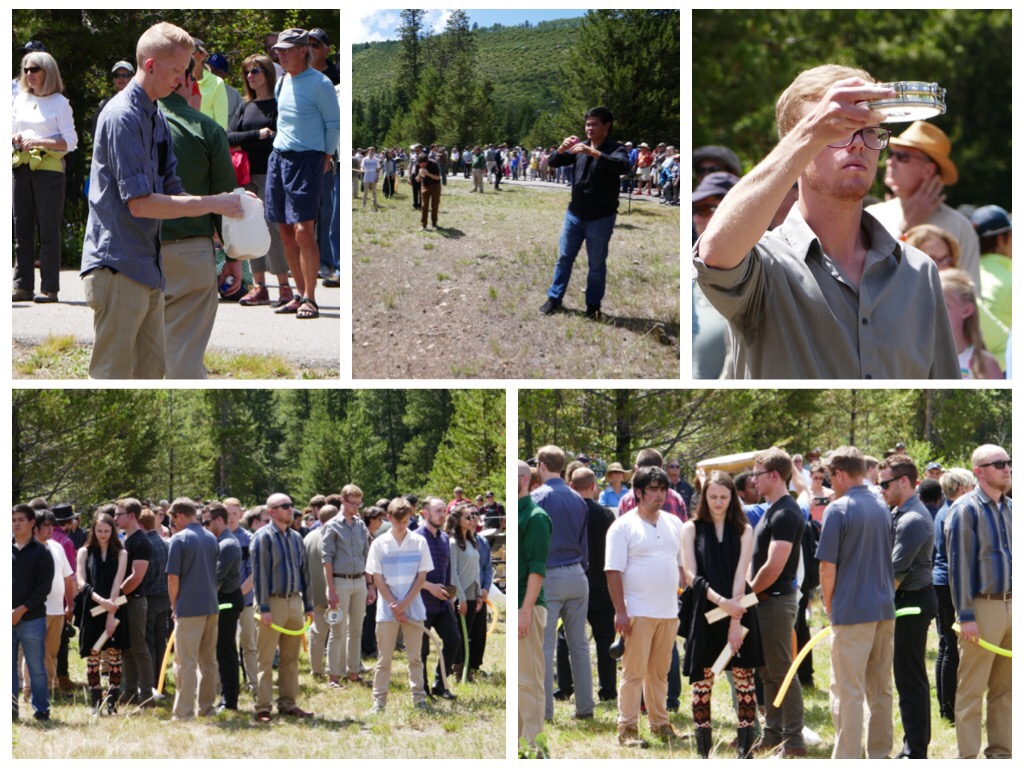 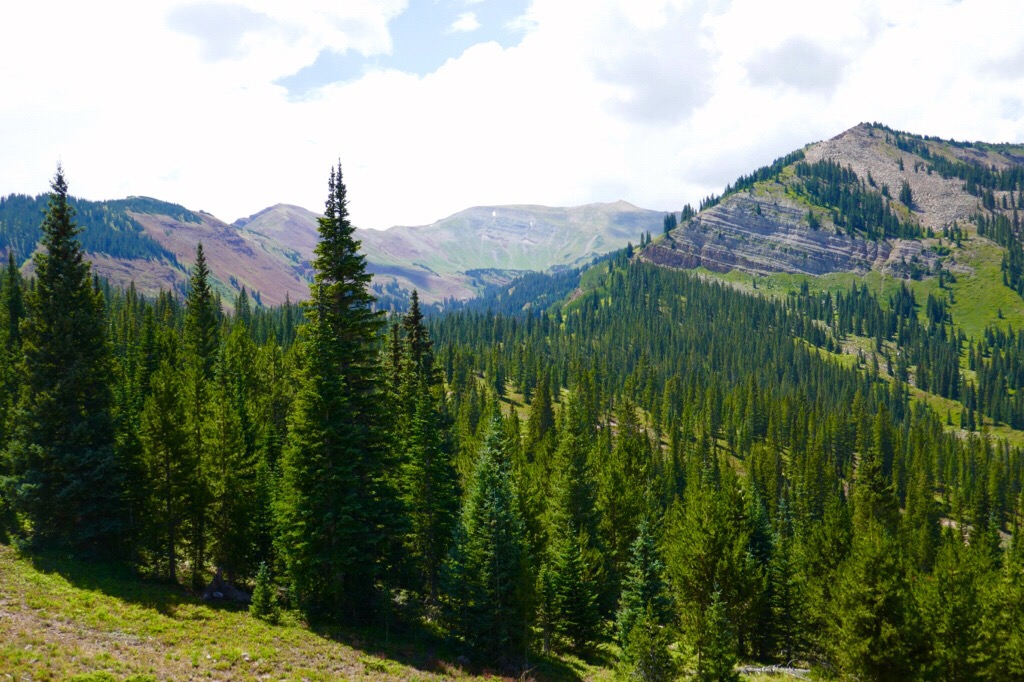 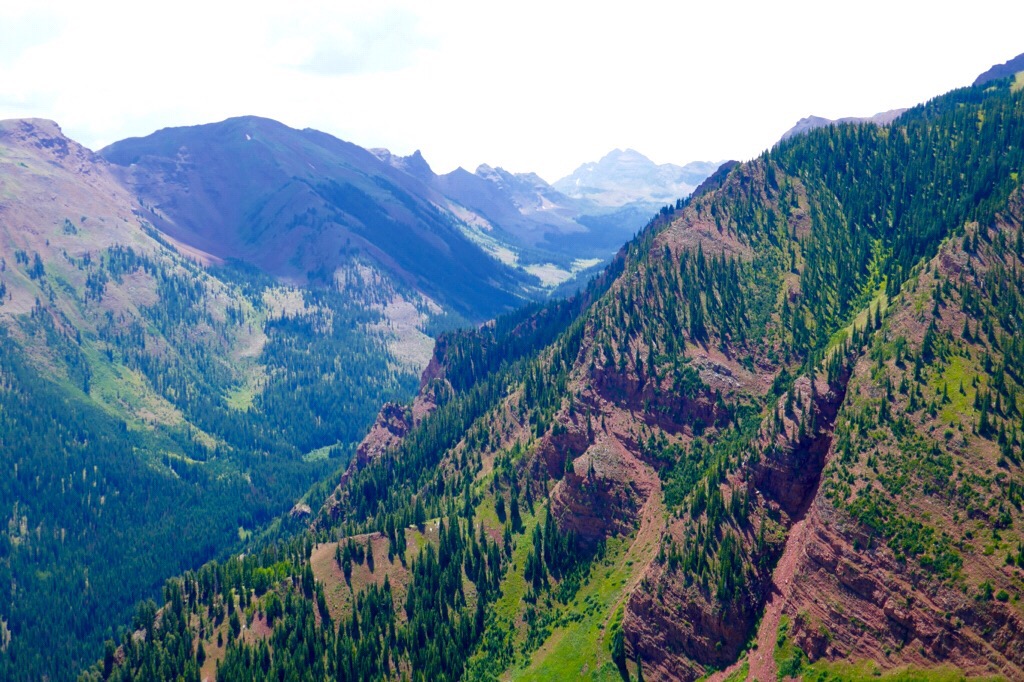 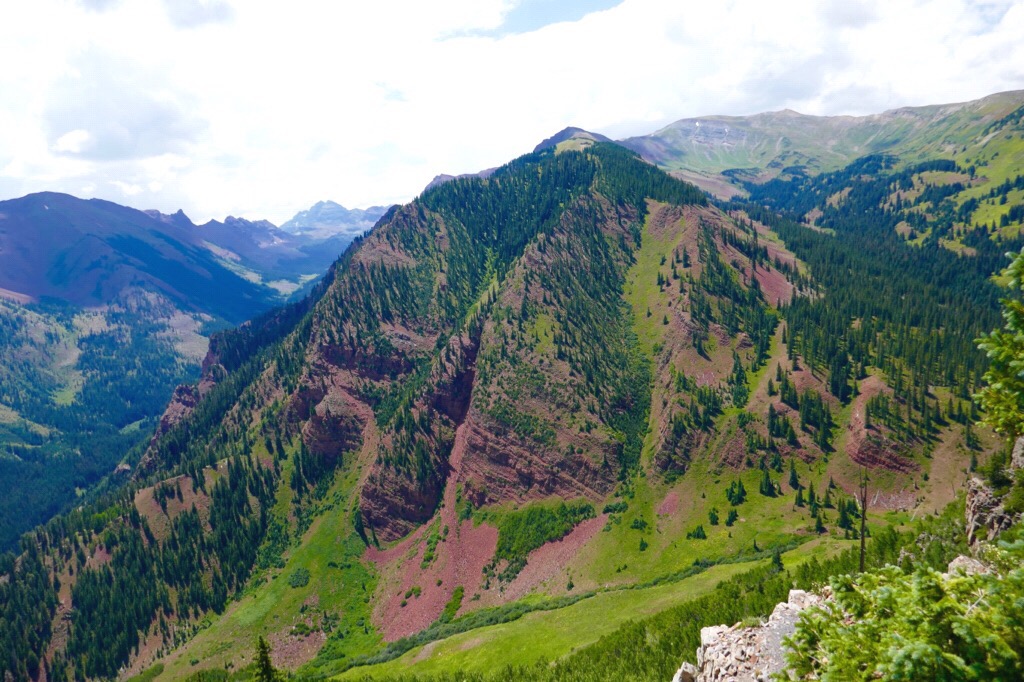 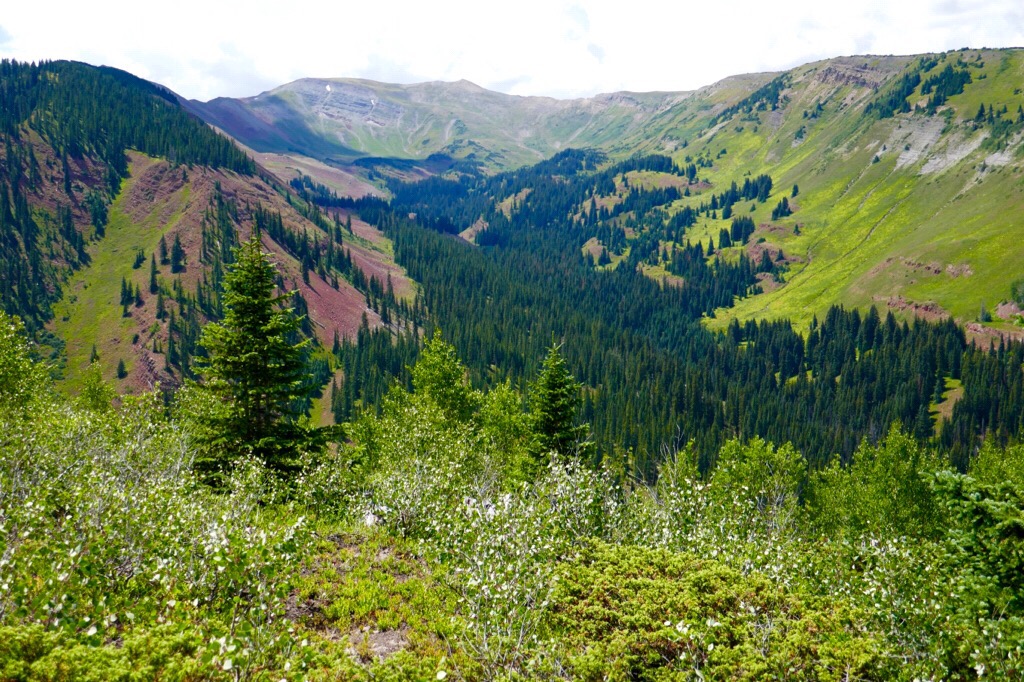 I normally do not rave about a concert, because we attend so many good ones during the summer concert season, but this one was very special.
It took place in an open space along the banks of a river, by the slopes of Minturn mountains.

Minturn is a small Western town a few miles west of the Vail ski resort.
This concert was also offered in Aspen the very next day, but we chose to attend the Minturn concert, because we wanted to stroll in the Minturn Farmers Market before the concert began.

The Farmers Market was well attended and wonderful.
We bought organic Colorado peaches and organic bagels, admired large sculptures of wild horses made from car parts, and for the first time read the slogan:
“If you are lucky enough to live in the mountains, you are lucky enough!!!!”

Then we went over to the concert.
People came from all the surrounding areas, and even all the way from Denver, just to hear this special percussion concert.

Sixty-six percussionists were spread wide around the surrounding hills.
There were no chairs and the crowd was encouraged to walk around the musicians, listening to all kinds of drums, cymbals, gongs, bells, rattles and xylophones, as they roamed around.

The concert started with no official explanation or signal.
The musicians just started twirling hollow plastic tubes that made a swooshing sound, like whispered hidden secrets in the winds.
Other musicians used rattles or sounded emergency sirens, which produced in me a heightened state of alertness.
After all, we are used to only hearing those sirens when there is an actual emergency.

It felt more like a new-age spiritual workshop, than a classical percussion concert.
It was truly magical.
We roamed around, listening to the musicians as they created sounds that bubbled in my stomach and vibrated in my body in a way I had never experienced before.

I am adding a link to a short YouTube video of the creator explaining his concept, which is very worth listening to.

Later in the week, we attended other classical concerts in Aspen.
I liked the Conductors Series, in which each of four different conductors directed a single movement of a symphony, changing positions after each movement.
Because they were also accomplished musicians, they sat down after conducting and played as members of the orchestra.

In one of the concerts, I read in the program that Gustav Mahler, after composing his Symphony No. 1 in D Major, that we were about to hear, had a problem getting it to be performed.

In order to appeal to the public, he revised it by chopping off whole sections of it and making other parts of it more melodic and romantic, and thus easier to listen to.

I was thinking about the many times in the past when I have painted over paintings that I no longer liked.
Most of the times I was OK with the new painting which overlaid the old one, but at times, I really regretted doing it.

I once painted over a large piece that I had completed of a market in New Orleans, (many years before the hurricane) and I still regret doing so.
I do not even have a photo of the painting for memory’s sake.

At the concert, I made an inner resolution that from now on, I will ONLY paint paintings that I love and that I will not even consider painting over them, even if nobody would like or buy them.

We also took a two day mini vacation in Snowmass, and hiked Snowmass mountain.
Snowmass is located just a few miles north of Aspen and it is another much loved ski resort.

You would think that for a woman who had just finished walking a 1200 kilometer pilgrimage, a few hours of mountain climbing would not be such a big deal, but my legs were stiff for two days after descending from the mountain’s peak at 11,500 feet to the base of Snowmass village.

These past few weeks we also had a problem with the pump of the water well for our house.
At first I thought that we had run out of water, but our well is so deep, that it goes far into the underground Aquifer, much deeper than the creek that runs beside our house.

Our pump was starting to pull water from the well, and then immediately shorting out, before hardly any water had entered the holding tanks.
It happened on the weekend, where we could not get anyone to come and fix it, so we had to go bathe in the nearby hot springs.

When the well service company came, they spent the day pulling the pump from the depth of our well, located 270 feet deep into the earth.
It took hours, but they replaced our pump and also upgraded the electric and water gauges.

Instead of regretting the expense, we felt grateful that we now have a new system and that we drink and bathe in our own clean, non-chlorinated, non-fluorinated pure well water, free of chemicals or medicine residue as is the drinking water available in most cities.

We also got our passports back, after applying for our Indian Visas for our upcoming trip.
I went bold and asked for a ten year visas that will allow us to enter India as often as we want, and we got them.

I will write again and elaborate about why we are going to India….

The photos in this post are from the concert in Minturn, from our visit to the Aspen Art Museum and from our hike in Snowmass.

Wishing you a wonderful week,
Tali

Click here to watch John Luther Adams explains the idea behind his wonderful Inuksuit concert which might be coming to your town as well:

Click here to watch snippets I took of the concert:

← Photos From The Streets Of Los Angeles
The REAL reason we are going to India. →