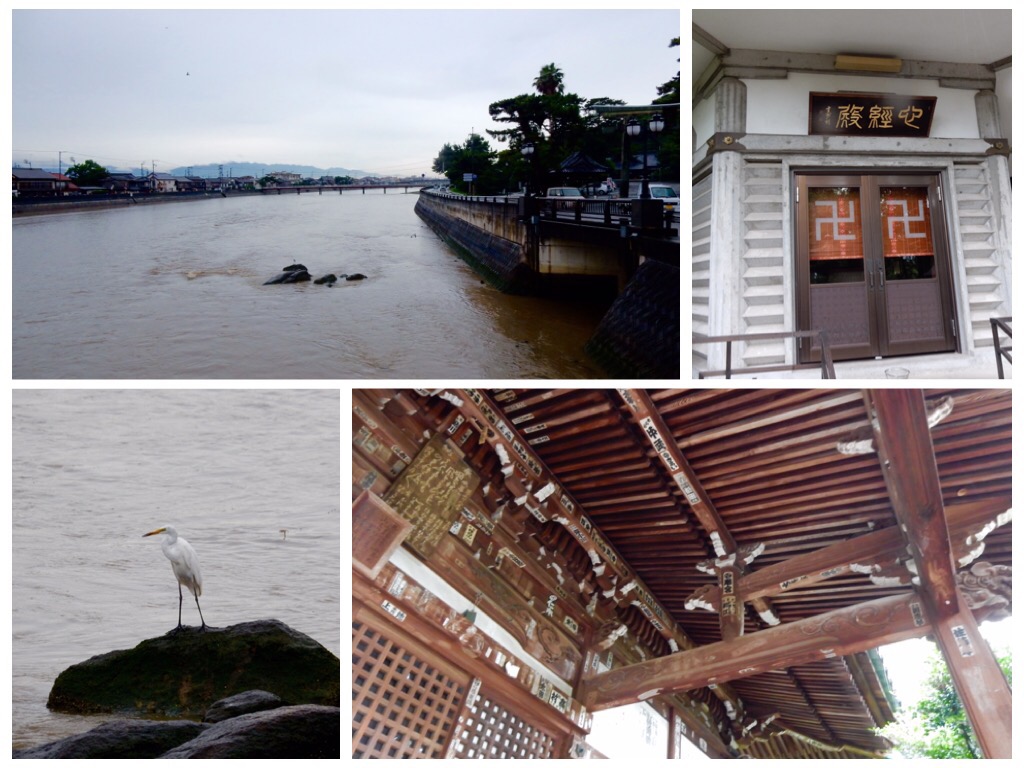 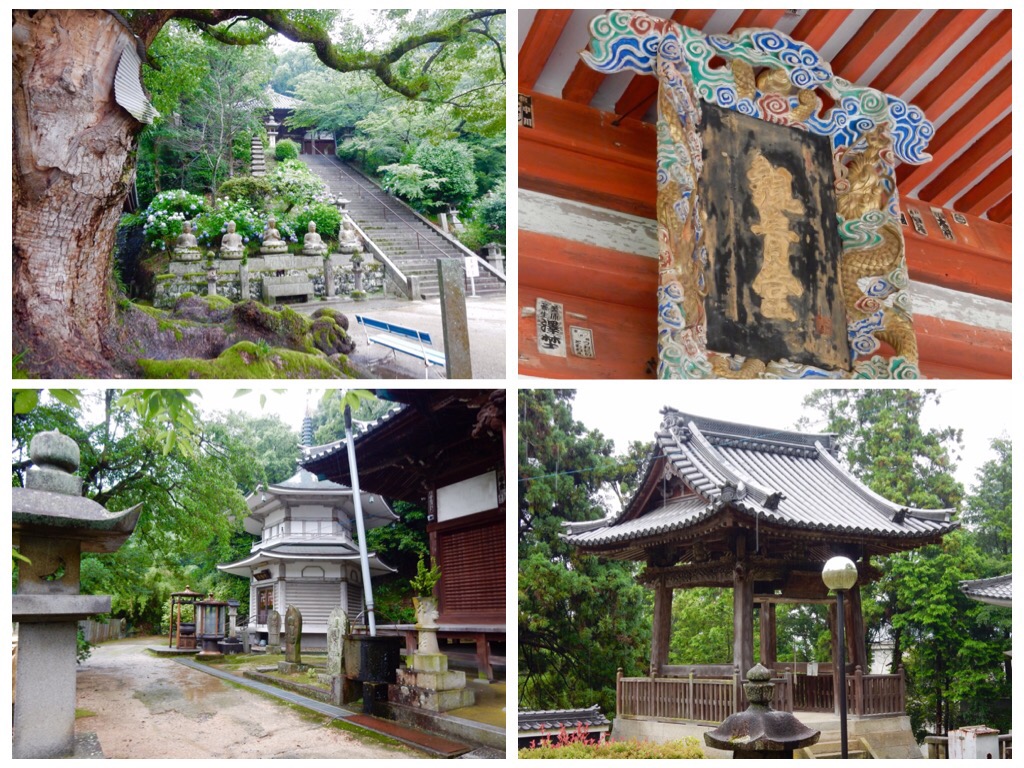 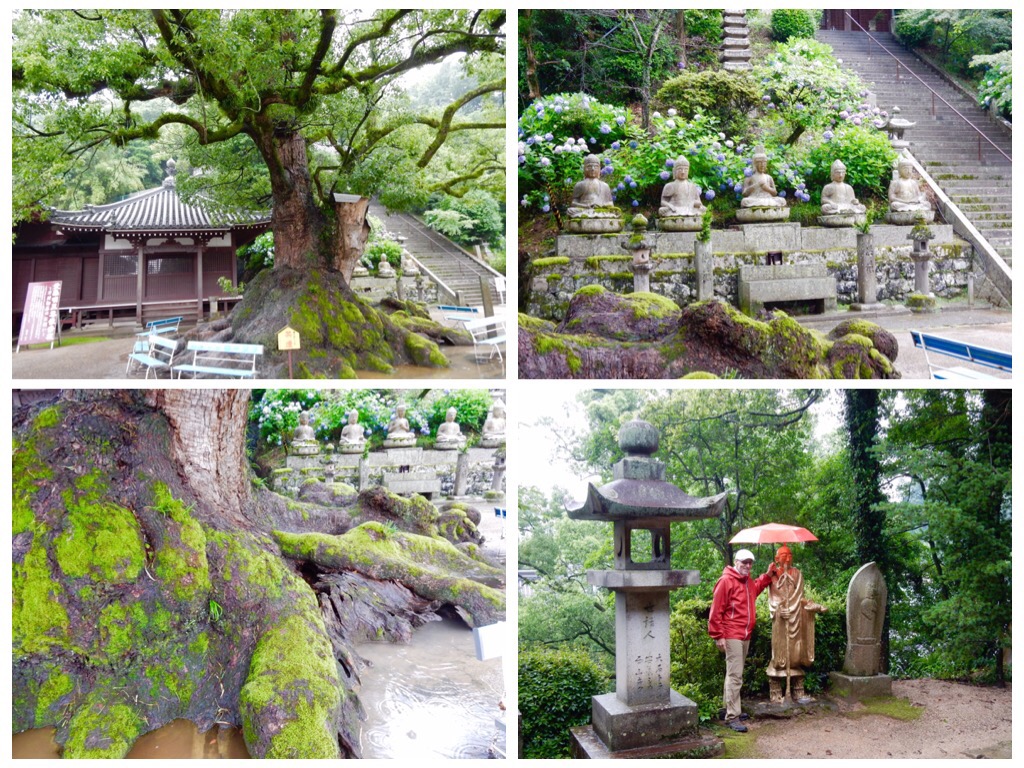 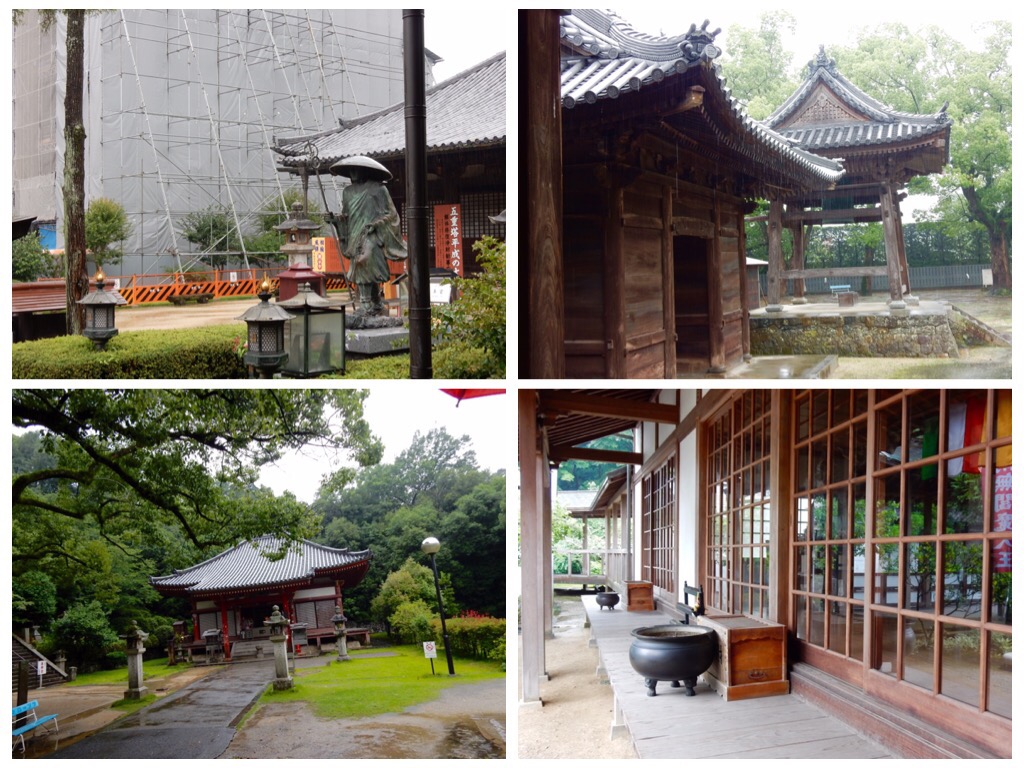 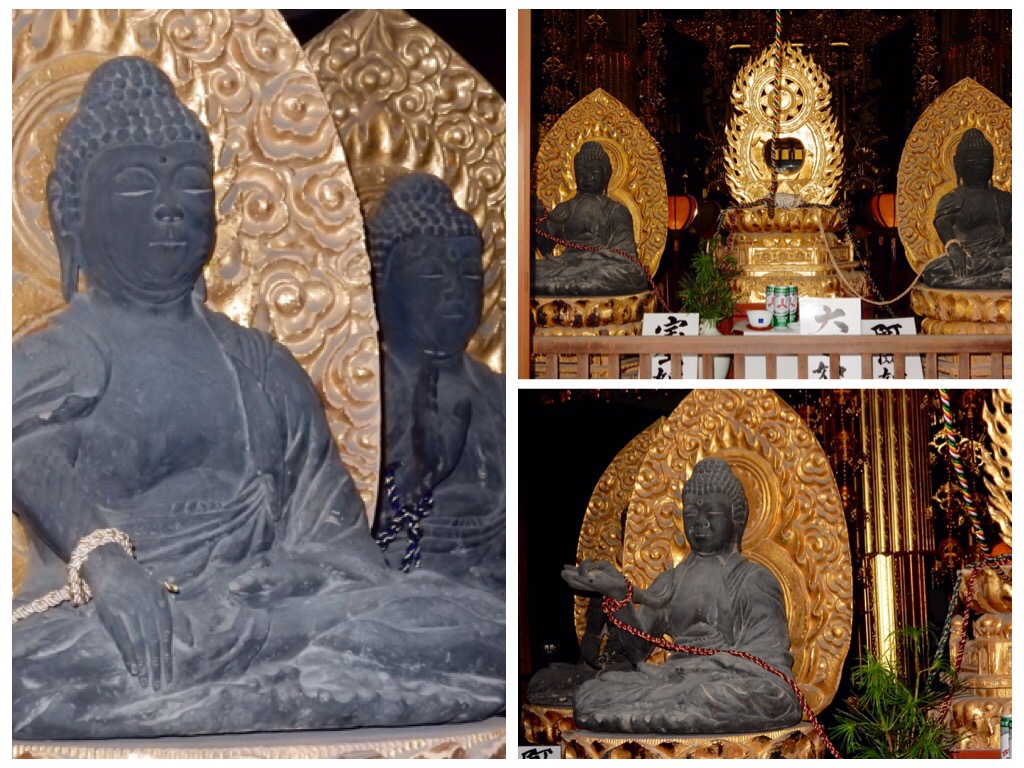 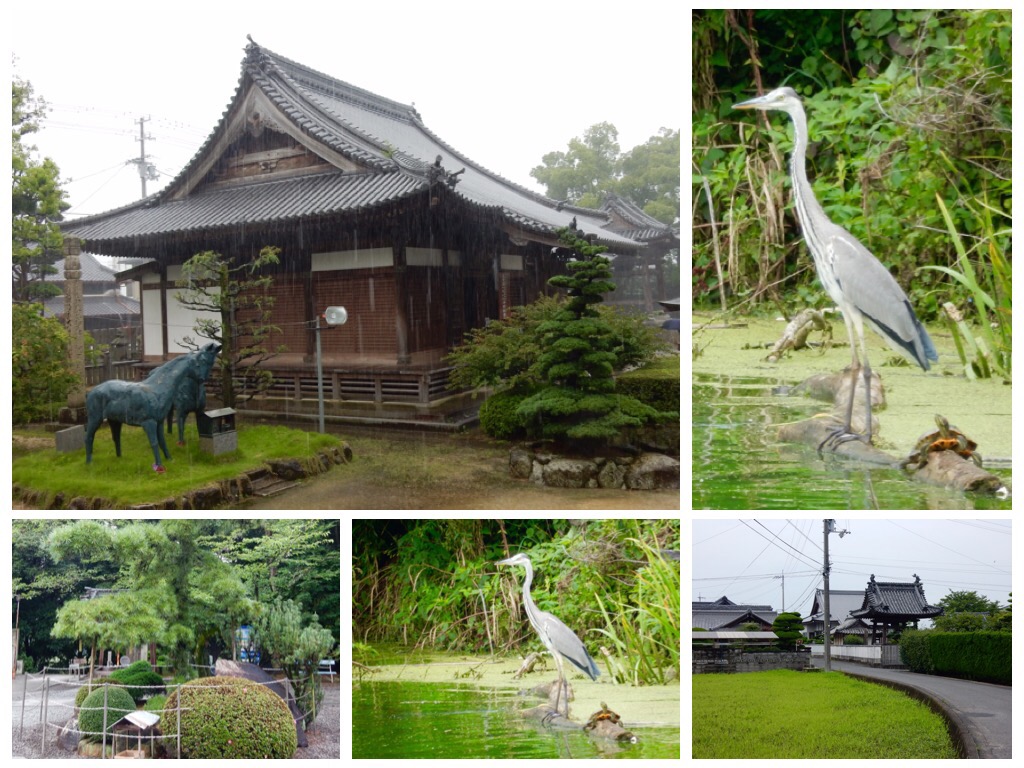 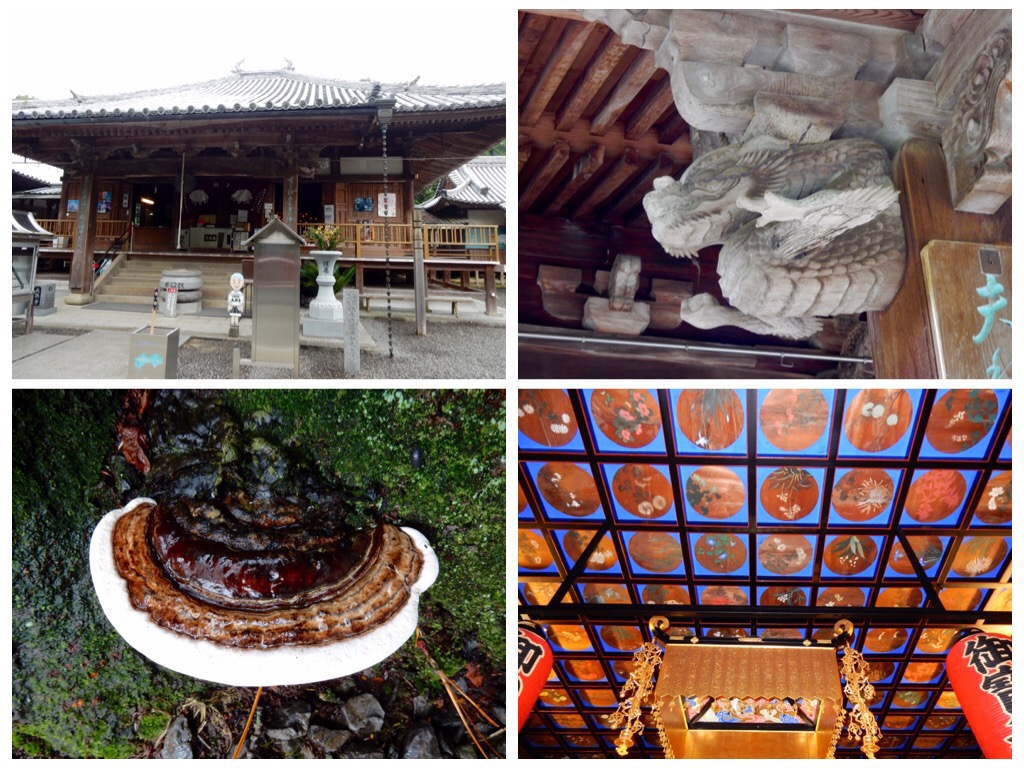 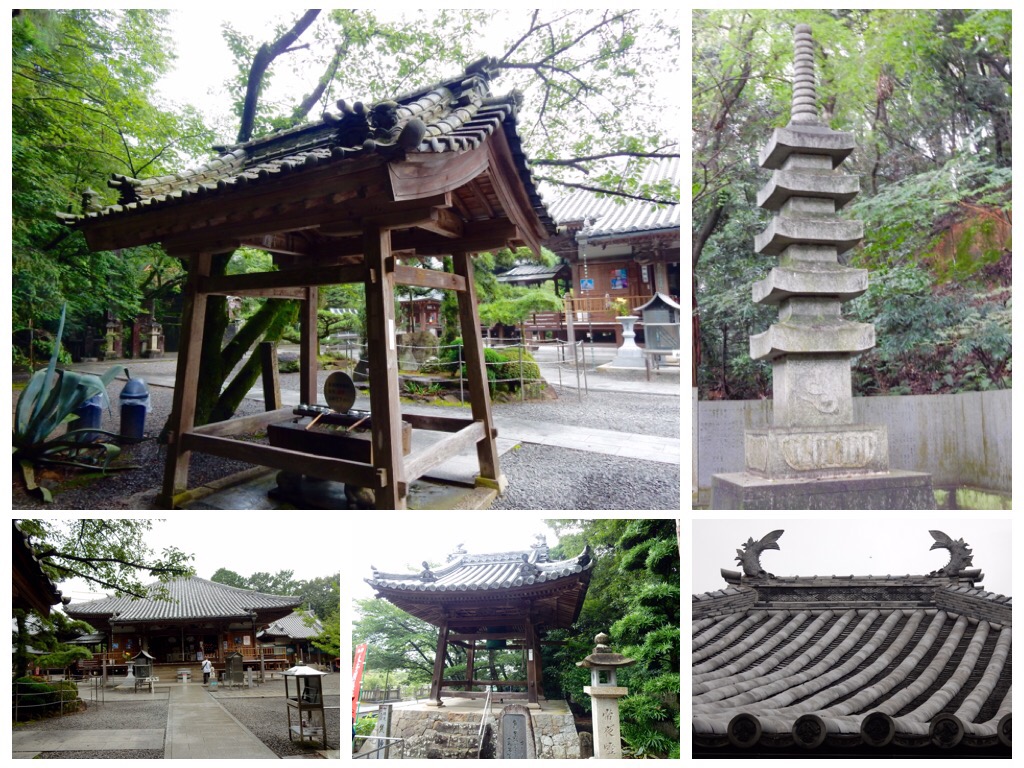 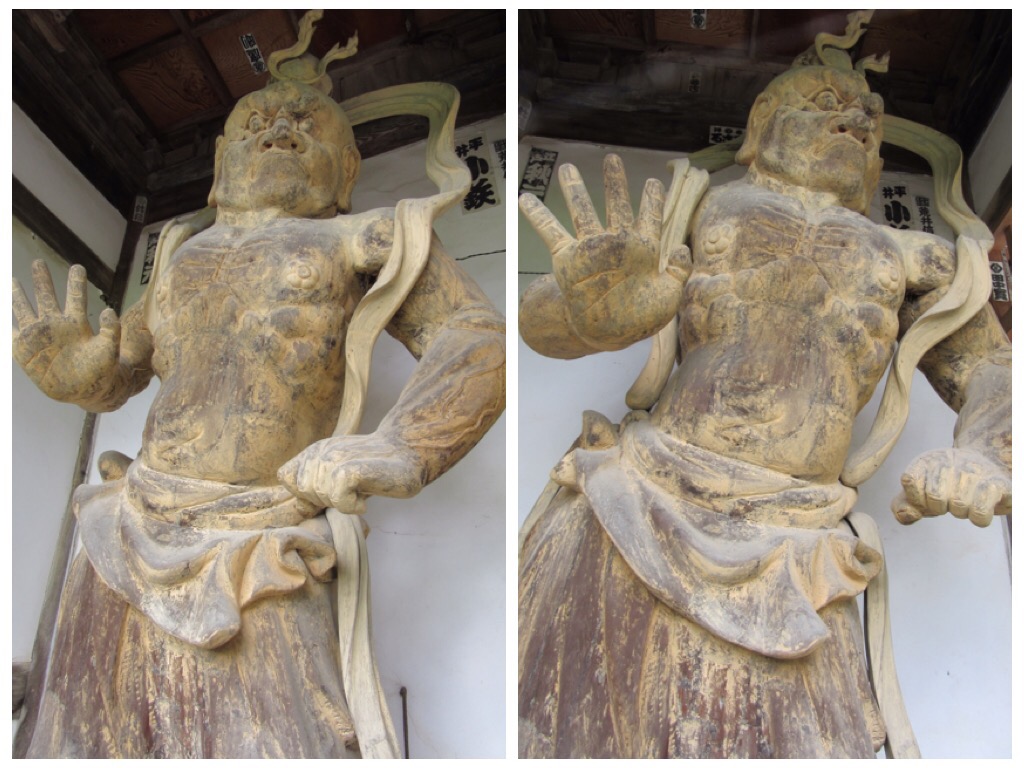 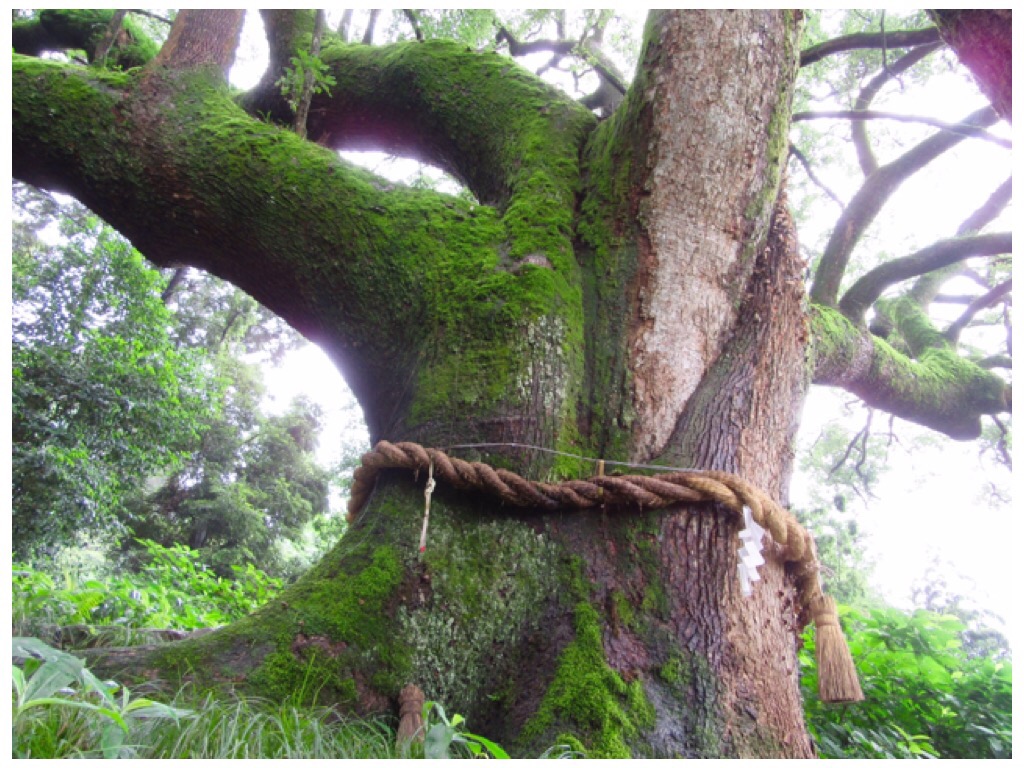 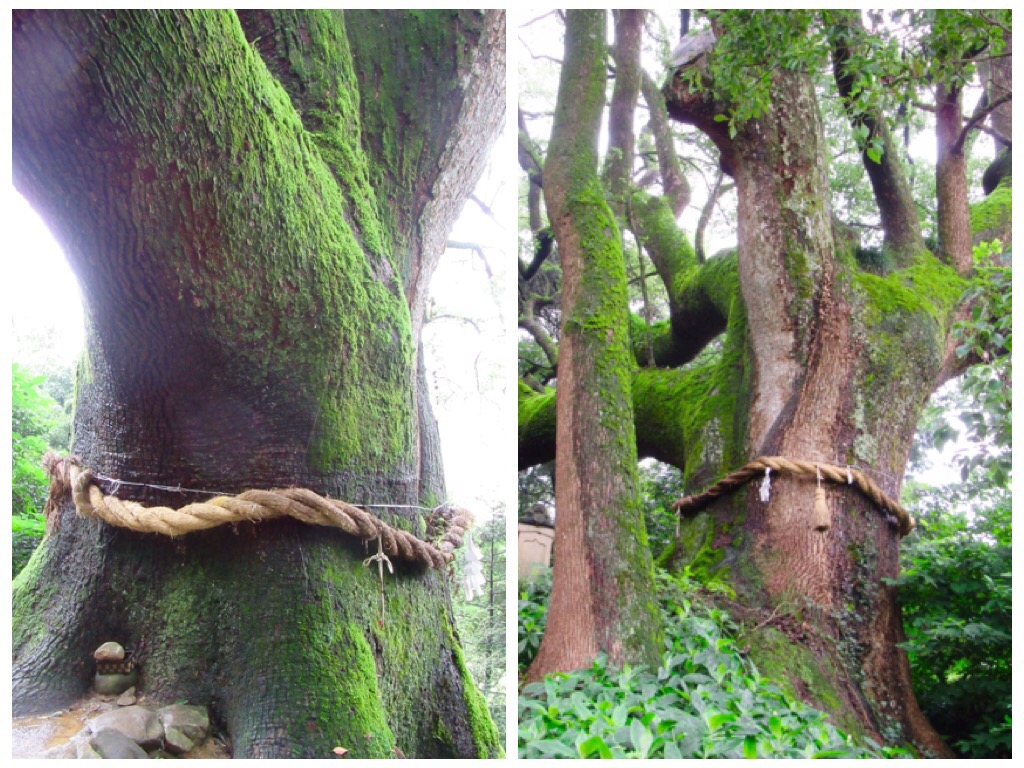 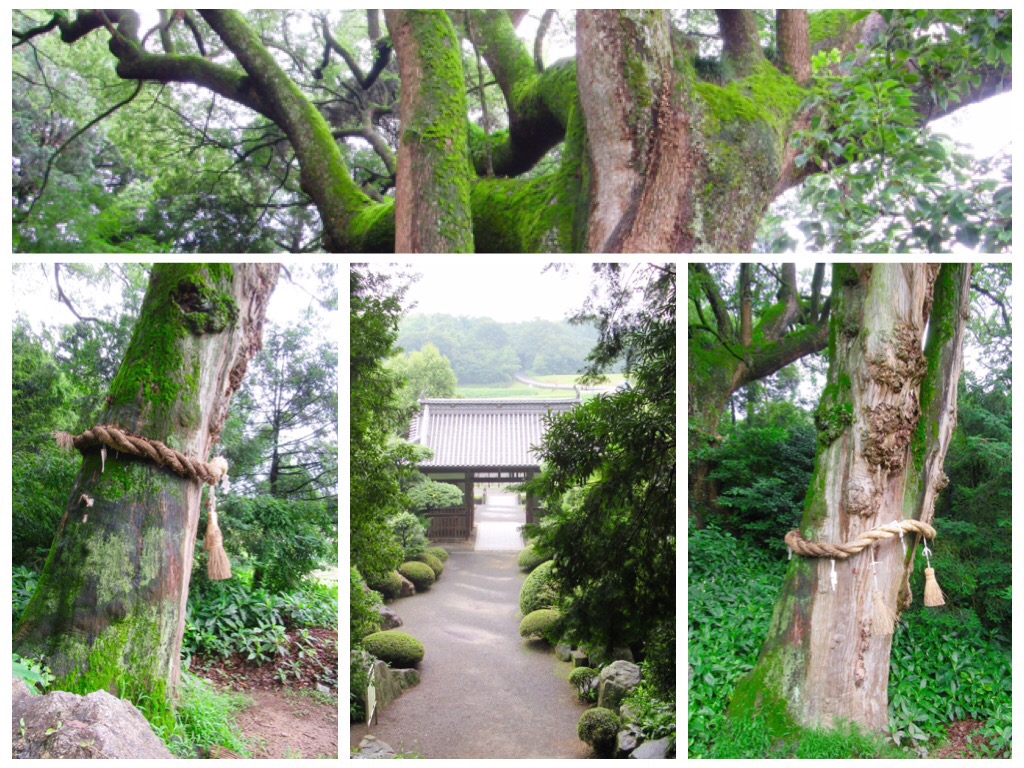 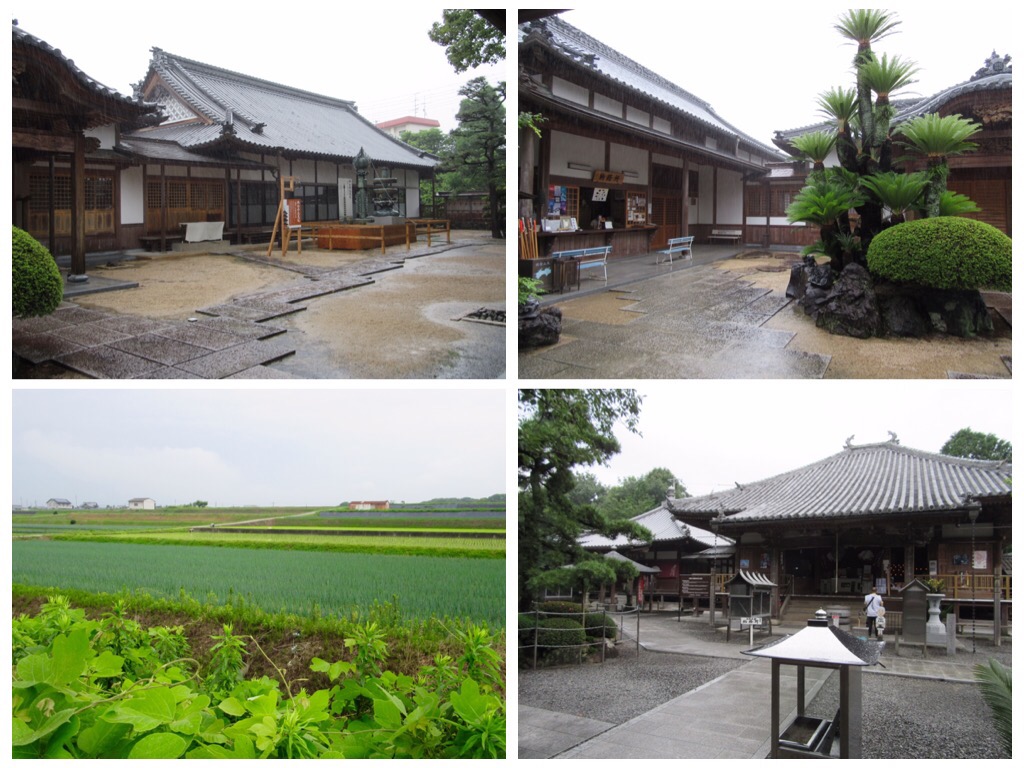 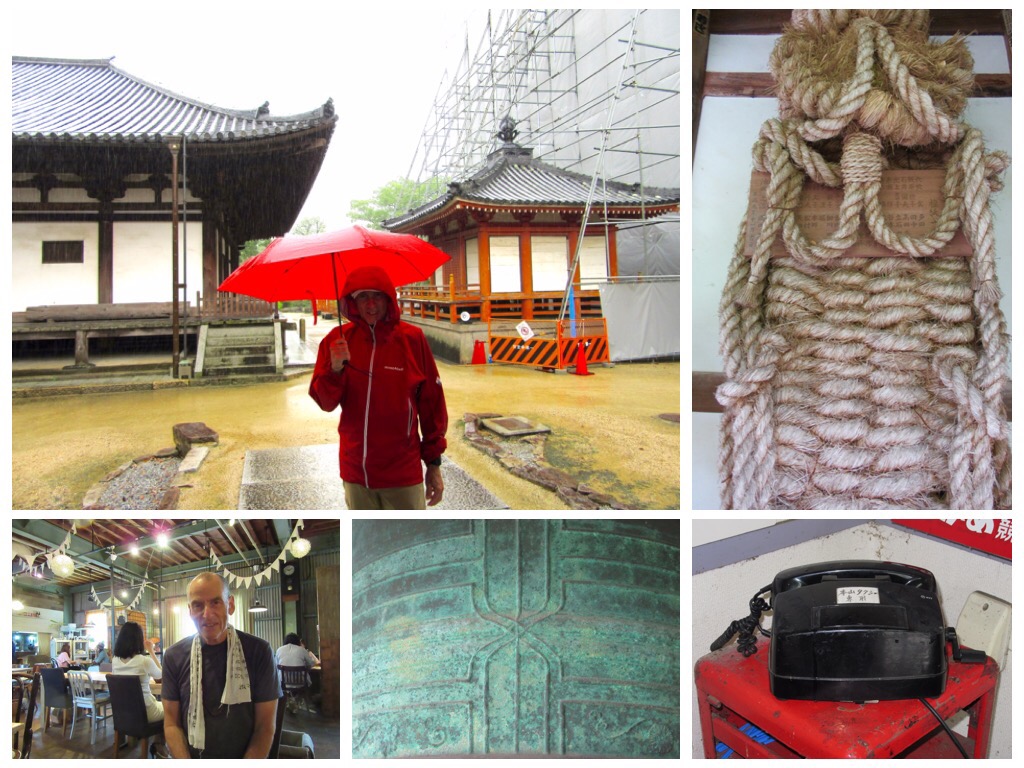 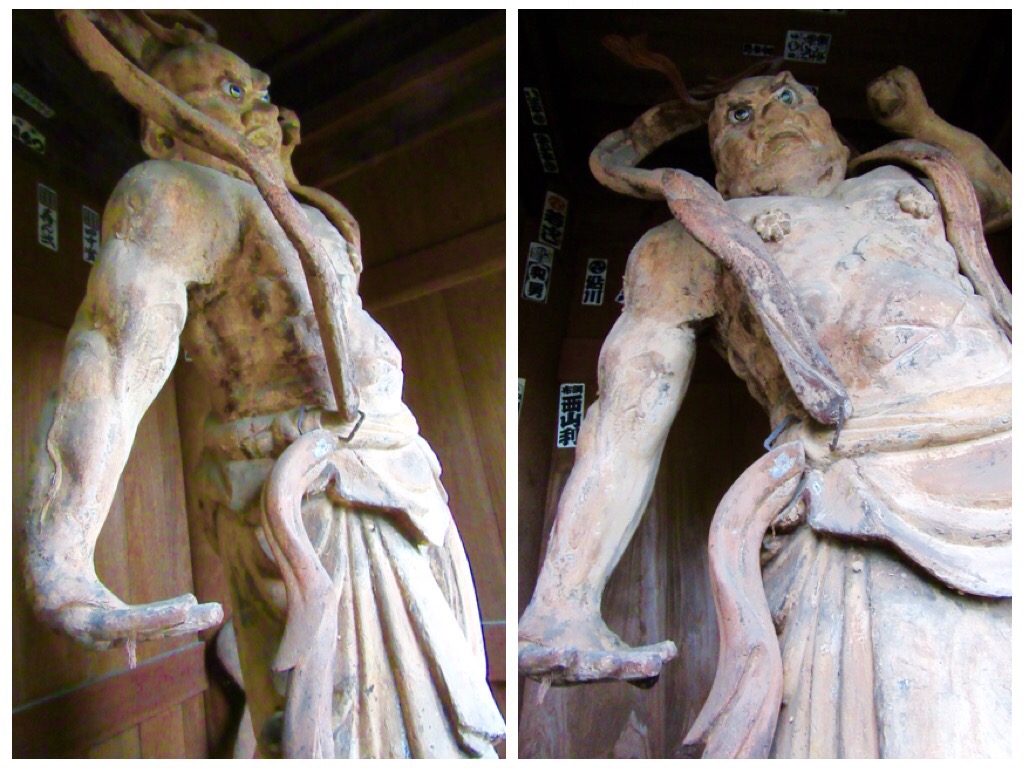 Today, in the pouring rain, we visited four temples in the Kanonji area.

We did not start the day with an ambitious plan.
In fact, because of the rain, we intended to stay in Kanonji town for another night, so that we could visit some of the temples tomorrow, but the distances between the temples are not very great.

Our hotel is also not so great, and there are no really great places to eat near us, so we pushed it a little and decided to move on to the next town tomorrow.

Today we also experienced walking in one of the strongest rainfalls on our pilgrimage.
Unfortunately, we did not wear our rain pants, and so we walked with soaked pants, socks and shoes all day long.

We started the day without breakfast, because the dinner we had last night at the hotel’s restaurant was not very good.
The only place that looked modern and cool in town, opened only for lunch, so we decided to visit temple 67, Daikoji, skip breakfast, and then head to the cool cafe for brunch.

Jules adds: “Our visit to the mountaintop temple Daikoji was relaxed and very enjoyable, because there was only a light drizzle of rain while we were there.

Just as we began descending towards the cafe after leaving Daikoji, the rain accelerated, and then did not let up for the rest of the day, until early evening.
So our views of the next three temples we visited today were quite limited, because of the poor visibility.

Still, we did manage to visit all four of the temples in the Kannonji area today, allowing us to leave for our next stop on the pilgrimage a day earlier than we had planned. We’re hoping for better weather tomorrow, when we also have plans to visit a number of temples in one day.”

Daikoji has a very old and very beautiful Camphor tree that was planted by Kobo Daishi in the year 822.

We were drenched to the bone after visiting Daikoji as we walked back from the outskirts of town towards temple 70, when the rain began in earnest.
We stopped at the nearby Knut Cafe and had brunch among a trendy crowd.

To be honest, at this point you would do best not to take my word about what is trendy.
Anyone with a nice hat and clothes that look clean, new and not so functional, looks trendy to me.

Most of the customers were young mothers in floral dresses with their tiny babies, who had lunch with their friends, all dressed in fashionable clothing and wearing funky hats.

We had some honey lattes and Jules had the honey French toast, while I had a salad and a mustard and egg sandwich.

We hoped that the rain would ease a little while we were having brunch, but it did not let up.
With acceptance of our destiny, we just stepped out into the pouring rain and were soaked in minutes.

At that point, we stopped trying to avoid the rain puddles on the road, since our feet and shoes were so wet that it made no difference where we stepped.

Temples 68 and 69 are located on the same hill.
We did not have to climb much, just a staircase.

It was hard to enjoy the temples when we could hardly see anything through the rain torrents, and the person at the Nokyosho office looked at us with pity as we double bagged our pilgrim’s book and stepped back out into the heavy rain.

These two temples also had giant Camphor trees that had roots that bulged in waves of swellings out of the ground.
They looked majestic.

The trees we saw today had huge trunks and gnarly branches that twisted into the sky.

To cheer ourselves up, as we were walking in the rain, I said to Jules that all we needed to do, was to imagine that we were ALREADY swimming and diving in the warm waters of the Philippines islands.
You would expect to be wet if you went diving, right?

I was so wet, that even my raincoat was failing to protect me and my upper body got wet and steamy, making me cold whenever there was a breeze.

Walking while soaked to the bone reminded us that it is also the rainy season in the Philippines….
Is it smart to fly to the Philippines after our pilgrimage is over, just to be soaked there?….

Back in our hotel, I peeled off my wet clothing and ran into the shower.
I wore my Yukata and went downstairs, to enlist the assistance of the front desk to help me make some changes to our hotel reservations.

Because we will be leaving a day earlier, we needed to change the dates of our upcoming hotel bookings.

While I was getting help at the front desk, Jules walked over across the street to the Aeon mall, to do our laundry at the coin operated laundromat.
Our hotel did not have a washer and drier.

Instead of eating another mediocre dinner, we decided to eat a simple meal in our room.
On our way back to the hotel we bought some Avocados, cucumbers, cherry tomatoes, lettuce, green Shiso leaves, mustard and bread made from brown rice.

I spread big bath towels on our bed and made us veg sandwiches.
It was a simple but wholesome meal, followed by a fresh apple for dessert.

Both of us fell asleep very early.

Here is a little bit about the temples we visited today:

Daikoji, Temple 67, was founded by Kōbō Daishi in 822.
The temple has been associated with the three Kumano Shintō Shrines since its founding.
At one time, it contained twenty-four Shingon Buddhism Halls and twelve Tendai Shrines.

The great camphor tree in the compound was planted by Kōbō Daishi.
The statue is of Tendai Daishi, the Chinese founder of Tendai Buddhism.
There are also two Daishidō Halls in the compound, one for Shingon and one for Tendai.

Like many other temples, this temple was burned by Samurai warriors led by Chōsokabe Motochika in the 16th century.

Temple 68- Jinnein, The Temple of God’s Grace.
On March 21, 703, Nisshō, a monk in the Yogacara School, had a vision here.
Seven colorful clouds arose on the western horizon and hovered over the mountain of this temple (Mt. Kotohiki).

Later, Kōbō Daishi painted the Kotobiki (harp playing) Hachiman in the form of Amida Buddha, and dedicated that to the temple.

The picture of Amida is now a National Treasure.

Down below the temple, on Ariake beach, there is a very large coin-shaped circle made of sand, that was originally built in 1633 in imitation of a coin of the Kanei period.
Because of the rain and the mist, we did not get to see it.

Temple 69 Kanonji
The temple and the town below it, share the same name.
Kōbō Daishi stayed here and was the seventh priest of the temple.

In this temple, during the Mongol invasions, Emperor Kameyama came here and prayed for the safety of the nation.

One priest manages both Temple 68 and Temple 69.
Temple 69 has several National Treasures, including an icon of Buddha entering Nirvana, Fudō Myōō, and painted scrolls of the temple’s legend of the god Hachiman.

Temple 70, Motoyamaji
Founded by Kōbō Daishi in the year 807.
It is said that he built the Hondō (main hall) in a single night.

The huge main shrine was built in the 9th century but had to undergo substantial repairs in the Kamakura Period.
Unlike most other temples on the pilgrimage, this temple has NOT been burned down, and is now classified as a national treasure.

This temple used to be the biggest temple on Shikoku Island.
Legend states that it was spared the ravages of Chōsokabe’s armies when they were driven away by a huge swarm of bees that live at the temple.

This is the only temple on the pilgrimage that enshrines the angry-faced Batō Kannon as its honzon.

When we visited, the five-story pagoda that was built by Kōbō Daishi, was undergoing major renovations and was completely covered.
Thus we did not get to see it.