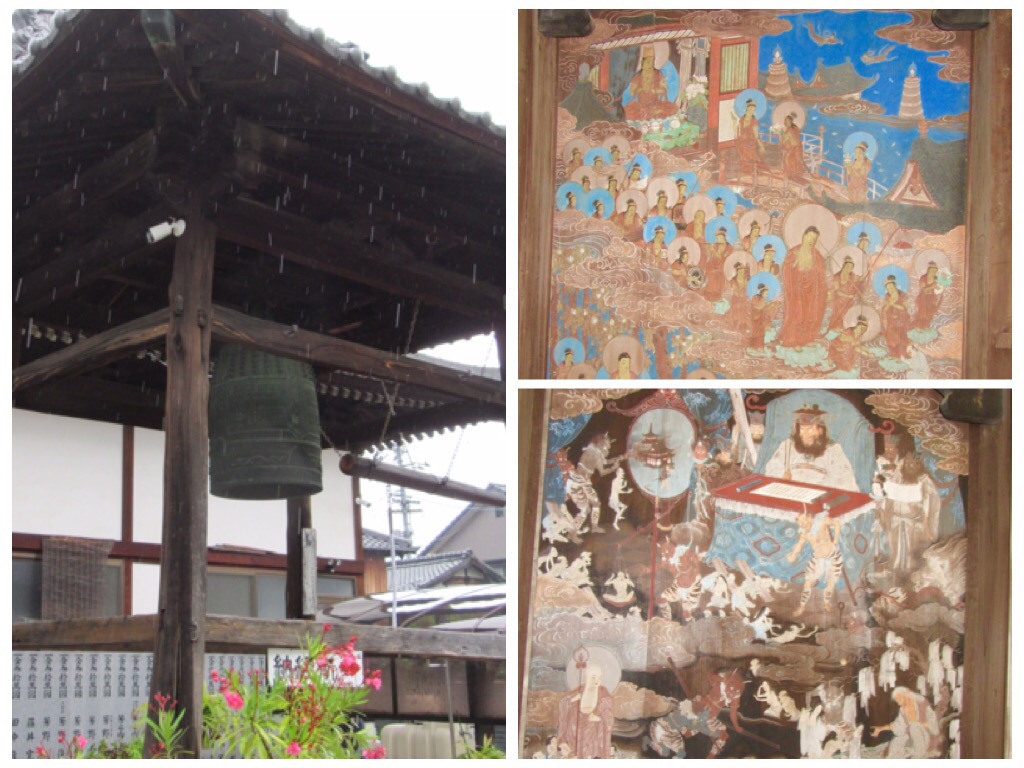 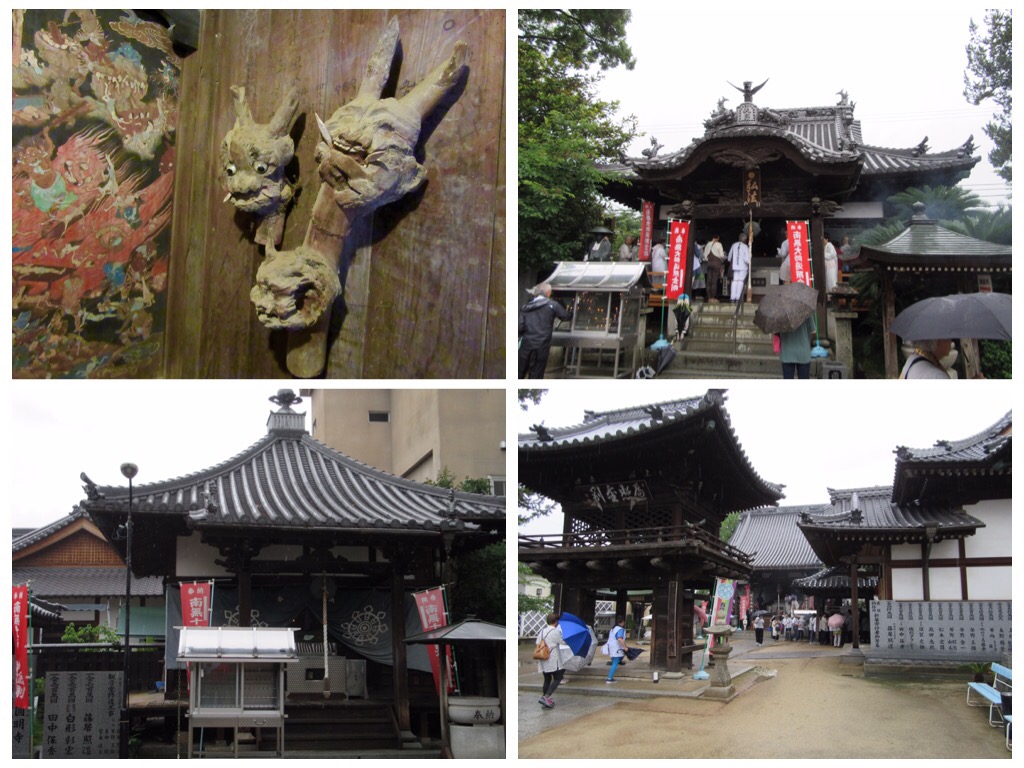 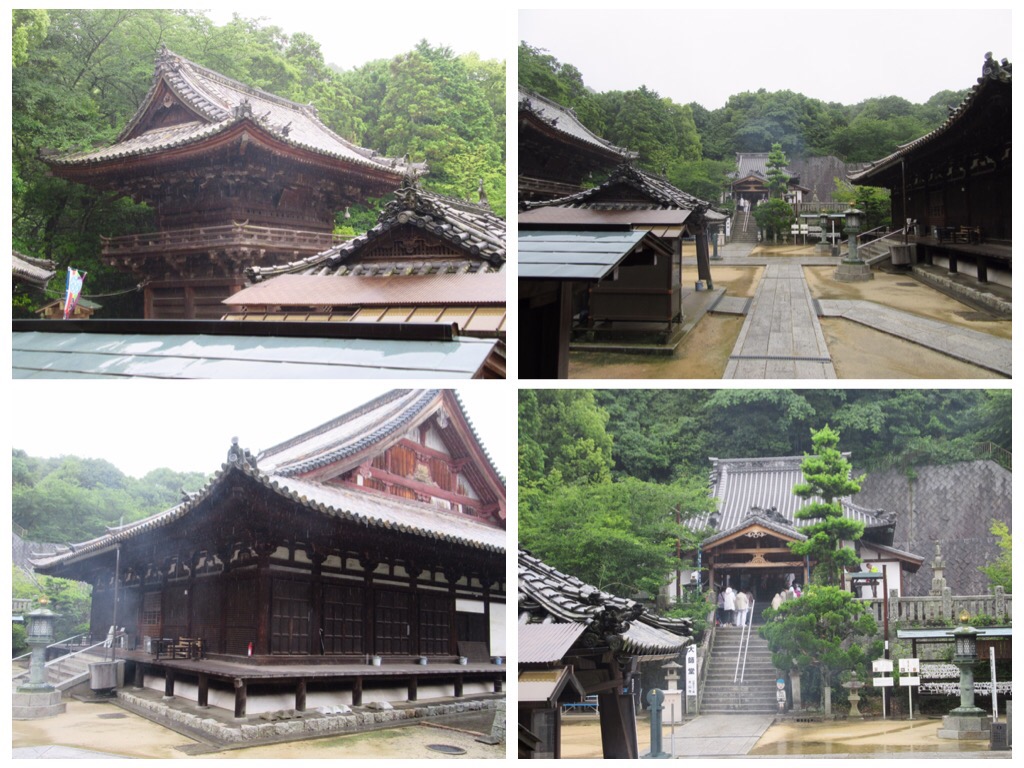 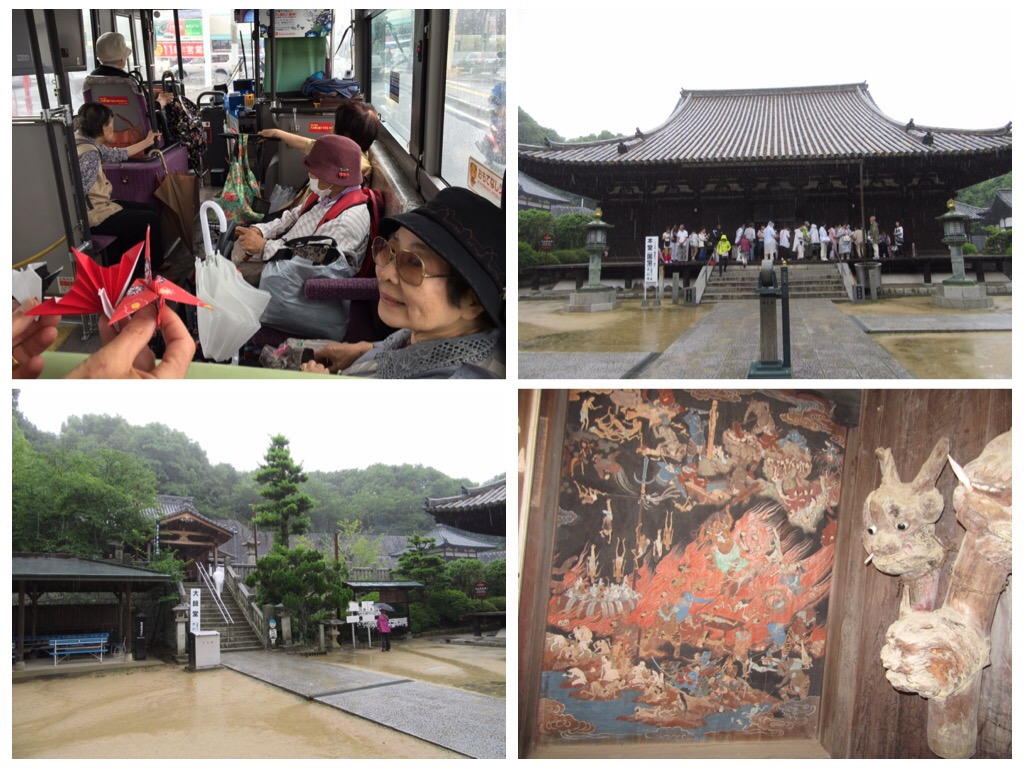 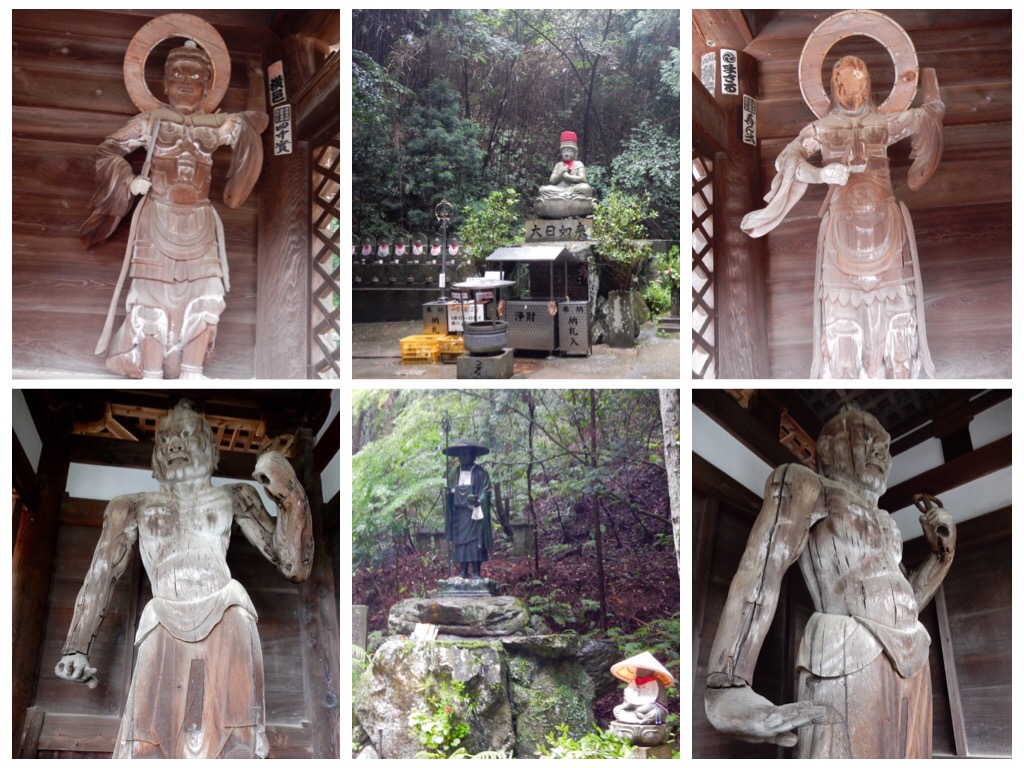 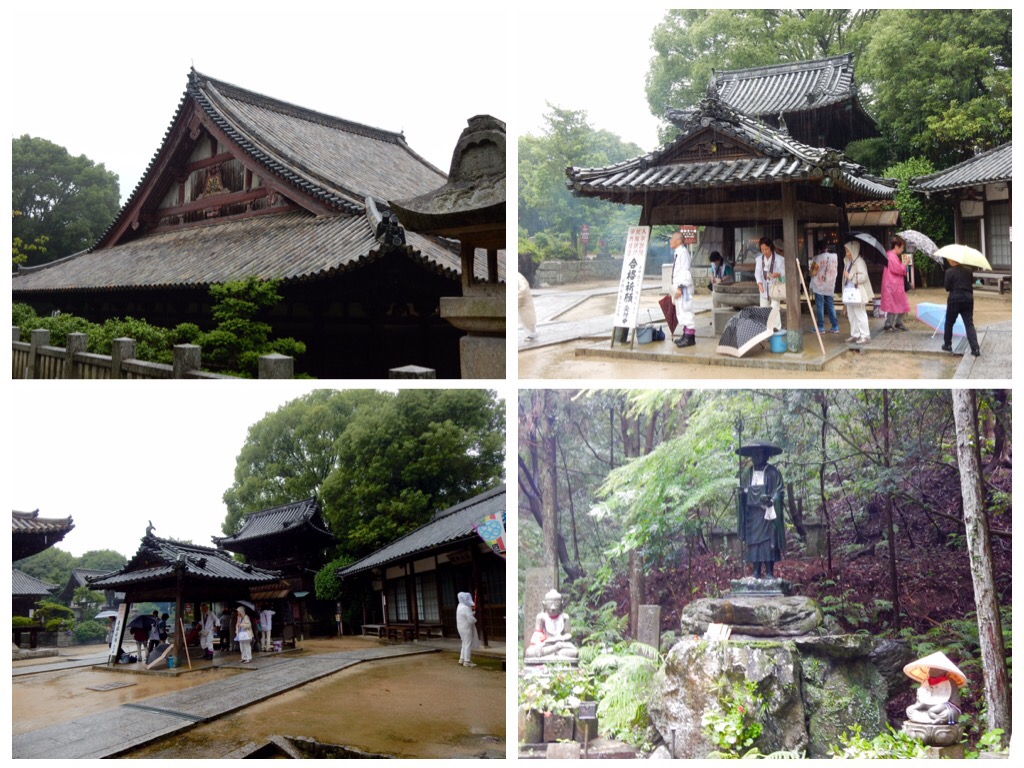 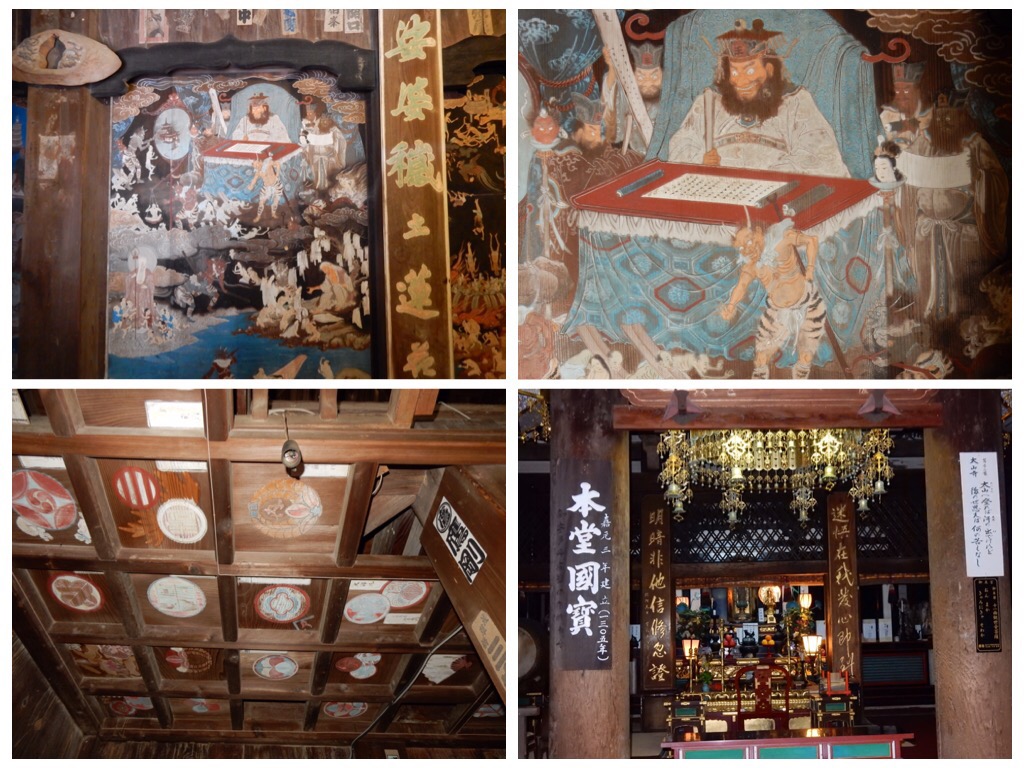 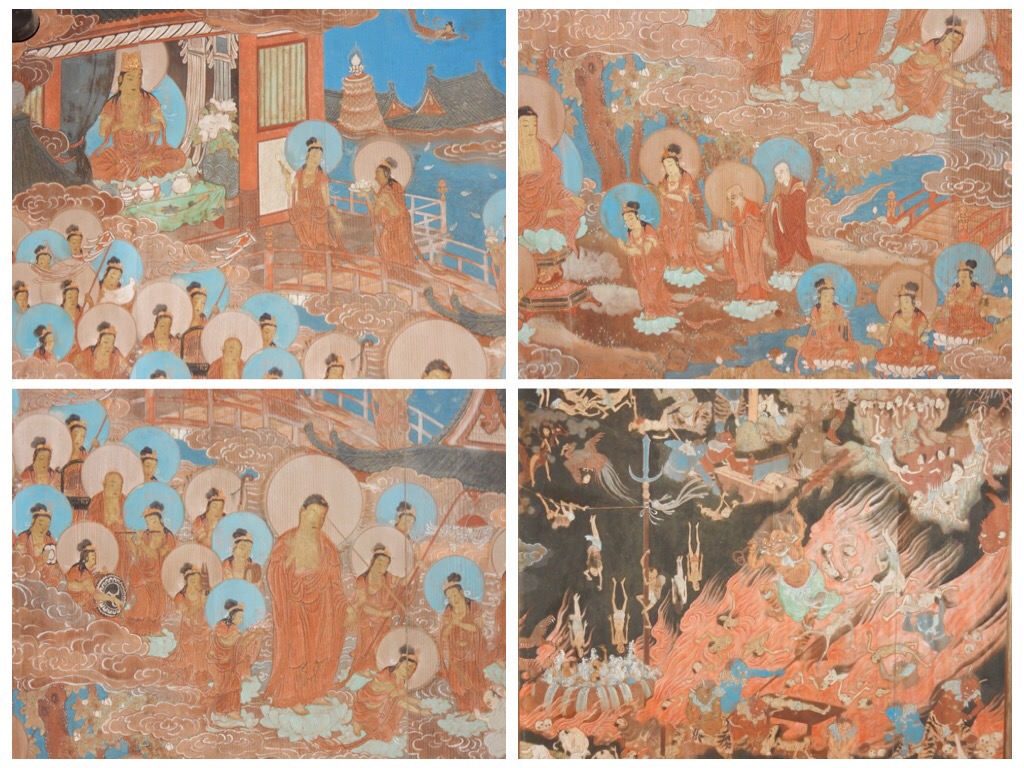 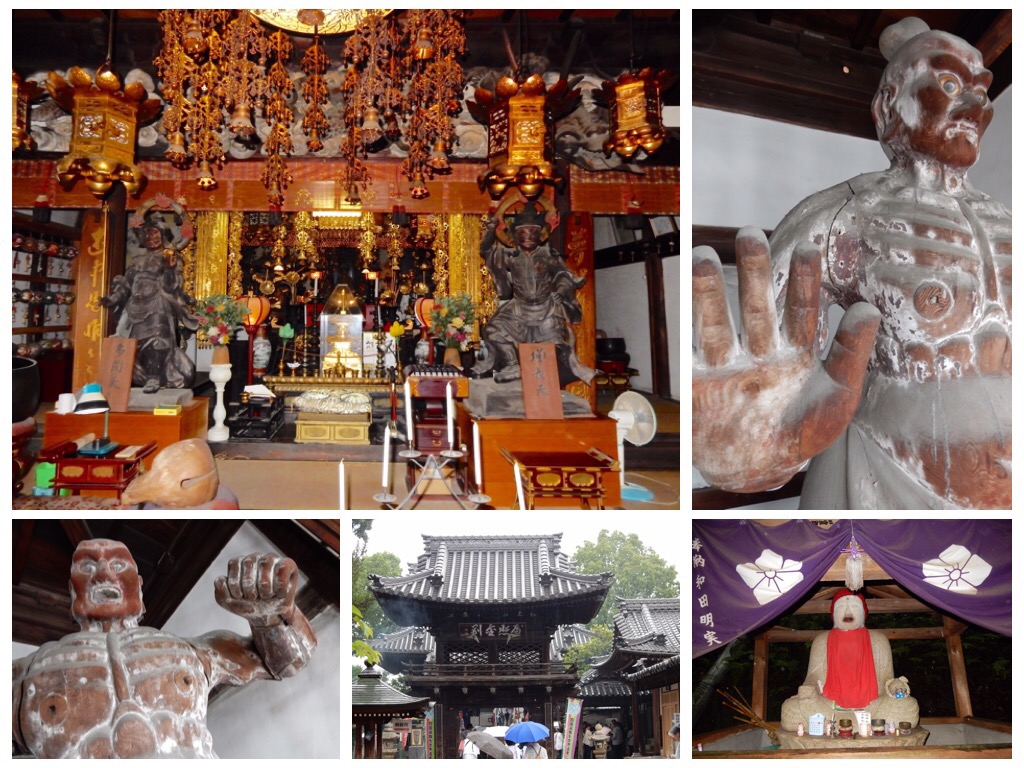 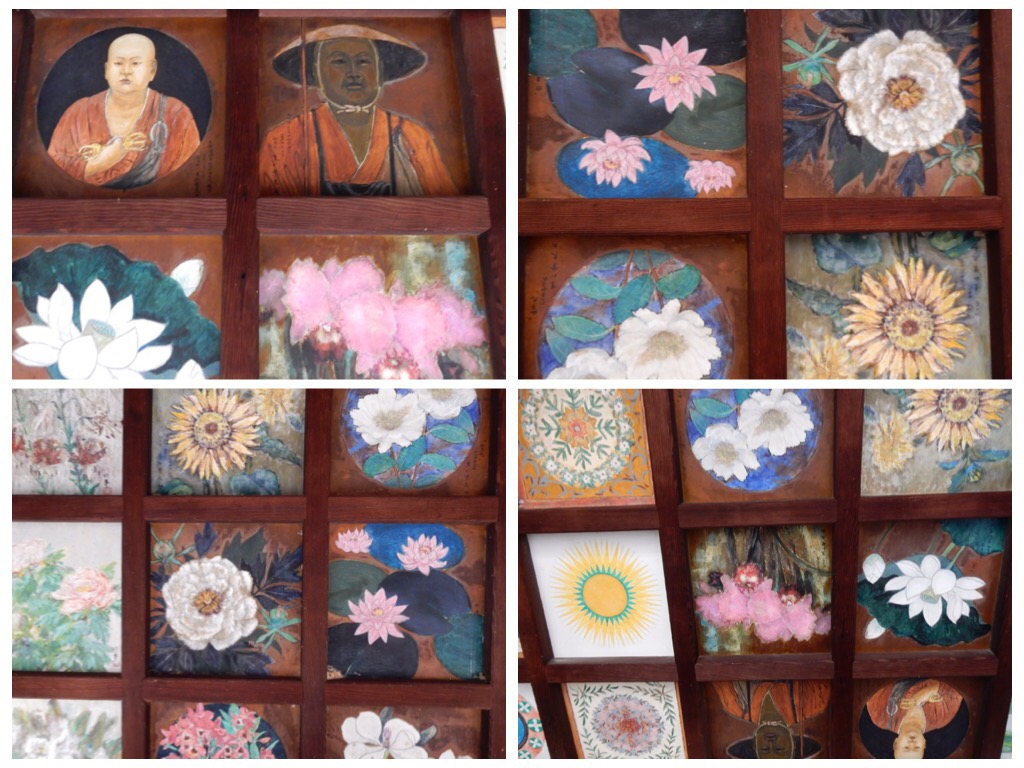 I woke up feeling sick, with a sore throat and an achy body.
On top of that, it was raining so hard, that we got wet even under our umbrellas, in the few moments that it took to walk from our hotel to Starbucks.

Breakfast in our hotel offers many good and healthy food choices, but I was not able to eat much.
I drank a few glasses of orange juice and ate very little, but I was determined to continue the pilgrimage, and to view my not feeling well, as just another hurdle that I must overcome, in a long pilgrimage filled with many challenges.

Because the day before we had covered some of the distance towards temple 52, we took the bus to cover what we had already walked, with the hope that the rain would subside a little by the time we arrived.

A sweet old lady on the bus gave us an origami penguin and crane birds that she had folded.
They were beautiful.
She got out at the hospital stop, along with the other women on the bus.

It always saddens me to see sweet and kind people who give in to the mistaken belief that the body must deteriorate with the passing of time and that dis-eases occur without our control.
I blessed them inwardly with the knowledge that one day, they will awaken to a higher Truth.

The rain did not ease all day long and my shoes and socks were already very wet as we arrived at Temple 52 Taisanji – The Temple of Big Mountain.
We climbed up the small but steep mountain between a group of bus Henros, amid a cloud of mosquitos in the pouring rain.

The temple was built by Mano Kogorō, a wealthy merchant from Kyūshū Island.
He built it to honor Kannon for saving him from a shipwreck on a voyage to Ōsaka in the 6th century.
After he was washed ashore when his ship sunk, he saw a bright light on the mountain’s peak and followed it.
On top of the mountain he found a statue of Kannon, and later he returned here with a ship loaded with building supplies, and built this temple on the same location.

The temple holds a festival every year on March 17th in honor of Mano.
The hondō is considered a National Treasure and is constructed without the use of a single nail.
Legend states that Mano built it in a single night.

The walk to Temple 53 – Enmyōji, The Temple of Complete Illumination, was between rice fields and farm houses.
The temple was originally founded by Gyōgi and was called Sugazan Shōchiin.

The name Emmyōji was given to the temple by Prince Kakujin of the Omuro Ninnaji Temple in Kyōto.
At one time this was a monastic community, but the buildings were burned down in the wars of the 16th century.
It was later rebuilt by the feudal lord Shigehisa Suga.

The Edo period was characterized by a strict social order, and isolationist foreign policies.
The shogunate perceived Catholic Christianity to be an extremely destabilizing factor, and so decided to persecute it.
Europeans were confined to certain areas in Japan and those who landed on other shores, were put to death without a trial.

At that time, my day long feverish feeling gave way to shivering cold.
I was sitting there in my wet shoes and socks, shivering in the air conditioning.
I needed to get out of my clothes and have a long shower and a soak in a hot bath.

After a long rest in our room, I suggested that we go across the street to have dinner.
I dressed in my yoga pants and black hoodie, but because of my shivering, I also put on a neck scarf.

Jules said that if I did not feel well, we could skip dinner and he would eat just a bag of nuts.
He then looked at me and said: “But since you already dressed so nicely, maybe you DO want to go out to dinner.”

I wanted to hug him.
What a dear man he is…
How could he say that I was dressed so nicely, when all I did was to put on one of my two outfits (the clean one) which I have been wearing day after day for the last two months….

We had a nice Italian dinner at Serafina New York across the street.
We had a large salad with avocado, a pasta with garlic and olive oil and a pizza Bianca (without tomato sauce).

The friendly waiter at Serafina asked us where we were heading next.
We told him that we are going to Imabari.

He said that Imabari is known for its high quality towels, and that they even have a towel museum.
He also added that his best friend comes from Imabari.

Jules asked if he could recommend a good place to eat in Imabari, and the waiter said that he would make a few phone calls and find out for us.

We saw him make some phone calls and do research on the computer.
He made a few printouts and brought them all in a plastic folder, complete with maps and instructions on how to get there.
He even apologized repeatedly that it took him a few moments to give us his recommendations.

We were SO touched.
Most people would just say: “Sorry, I do not know Imabari that well.”
But this guy took the time to call his friend, do research on the computer and make printouts, and he even got a plastic folder, so we would not leave the restaurant with a bunch of papers in the rain.

Of course he also got our umbrellas for us by the door and bowed about a dozen times and thanked us for coming.
In Serafina New York on Broadway, I am sure no waiter every did anything like this…
But we are in Japan and the people are beyond helpful, kind and personable…